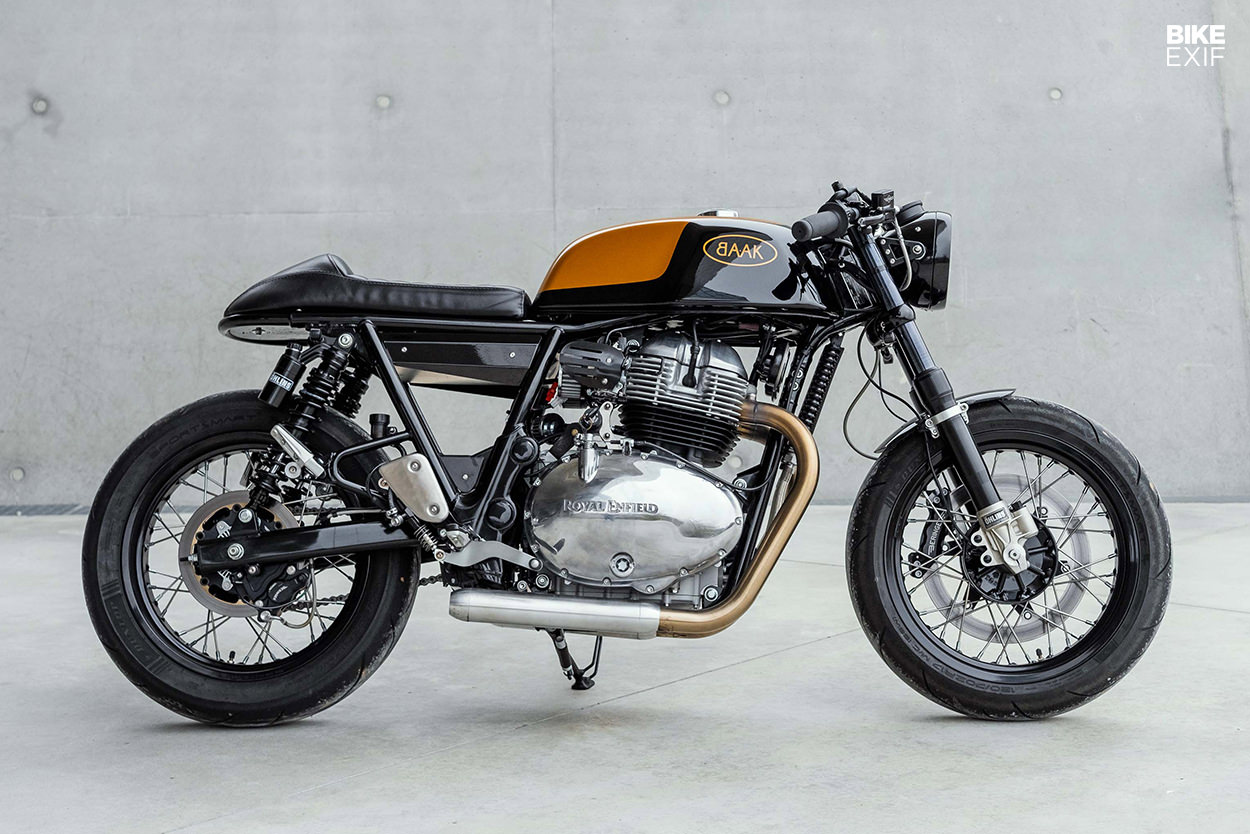 There’s a lot to like about the Royal Enfield Continental GT. The styling is ace, it’s a doddle to ride, and running costs are minimal. It’s also a bargain—with extremely low pricing in most markets.

If the Continental GT has any kind of downside, it’s engine power. The parallel twin is smooth and easy to manage, but it’s also a little low on output—sending just 48 hp to the crank. That’s enough for some owners, but there are others who would love more oomph. 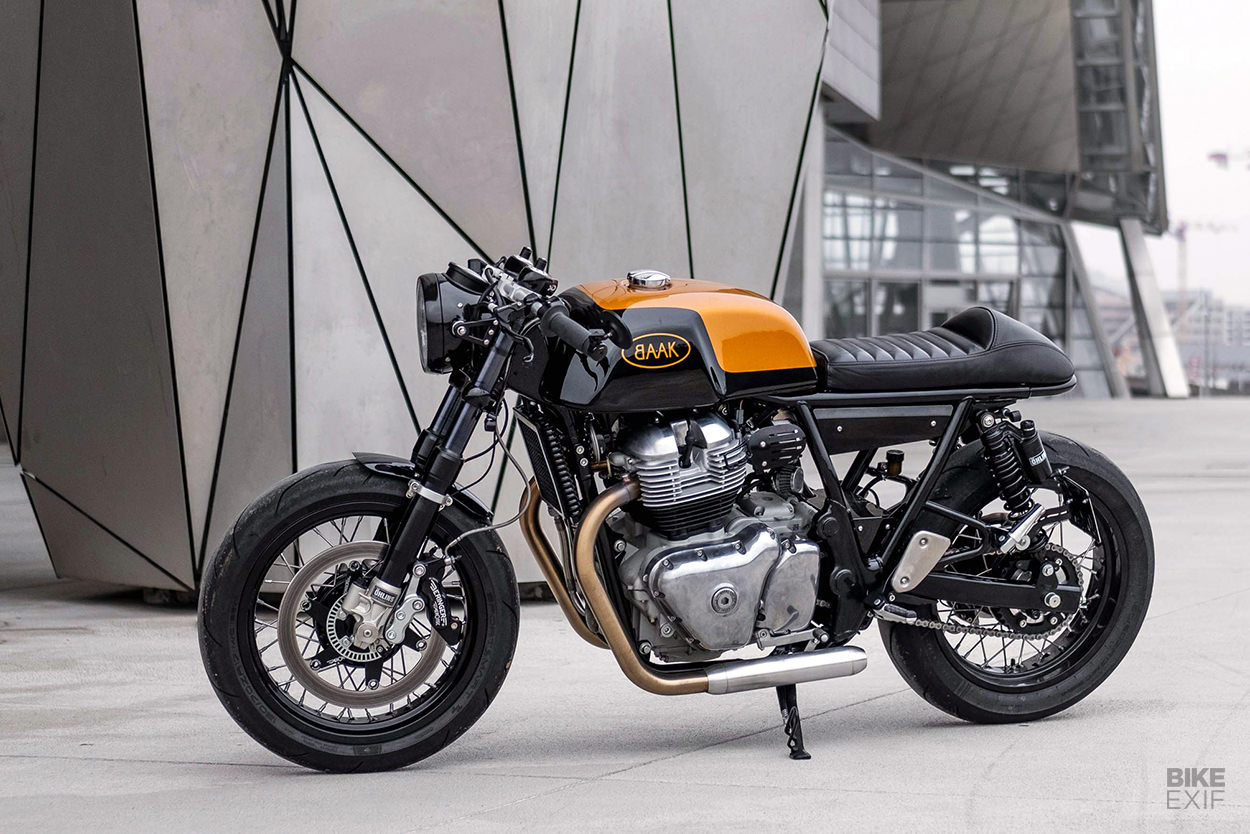 The French workshop BAAK has answered the call, with help from the American tuning wizards at S&S. There’s a necessary visual refresh too: five years after the launch, Royal Enfield is now exporting over 3,000 of its 650 Twins every month to international markets.

Adrien Bihel of BAAK explains how this Enfield custom came about. “It was originally commissioned, then we decided to add it to our catalog,” he says. “Two versions are available: the Racer and the better equipped Racer LTD.” 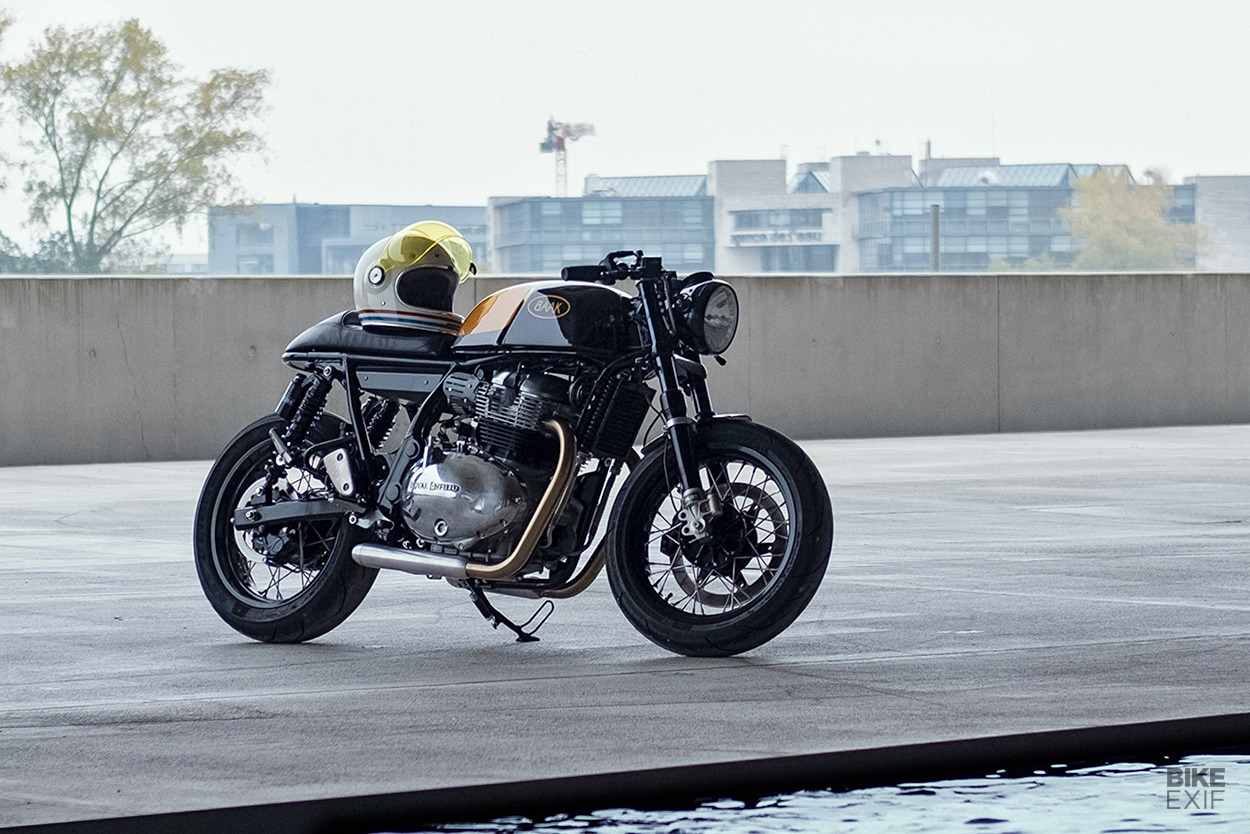 The LTD is the one with the S&S engine mods, and the one we’re looking at here. “We used a 865cc Big Bore kit from S&S, plus a camshaft and a reinforced clutch,” says Adrien.

This kit increases bore from 78 to 90mm, and raised-dome pistons increase the compression from 9.5:1 to 11.0:1. The new cam has higher lift and a longer duration, and helps lift engine output to around 70 hp. 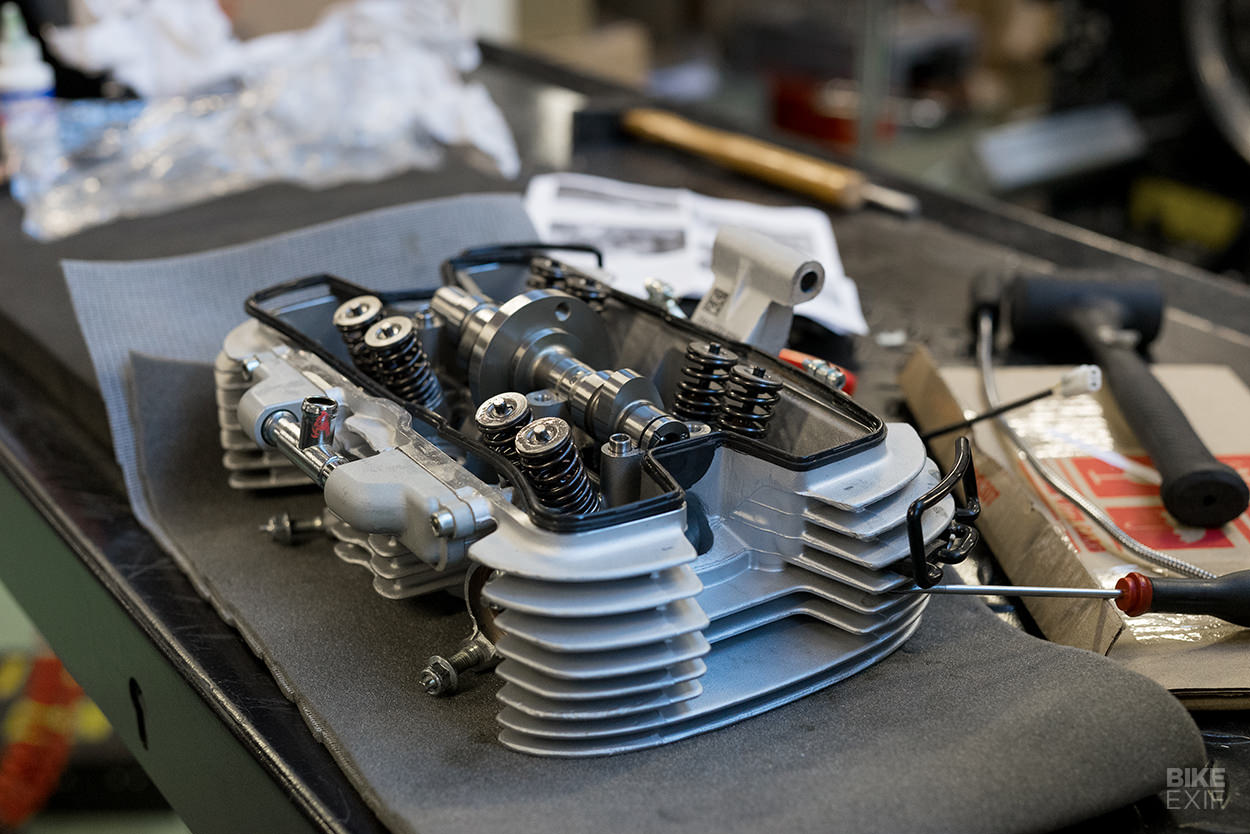 The hefty factory mufflers are gone, with BAAK’s own stubby ‘Bobber’ items swapped in—which will save a few kilos, and boost power still further. The engine note is apparently much deeper than usual, but still under 100 dB.

BAAK have also fitted an airbox delete kit, which also frees up most of the space under the seat and lightens the look of the bike. It includes two air filters and an oil breather, plus a pair of black side panels. 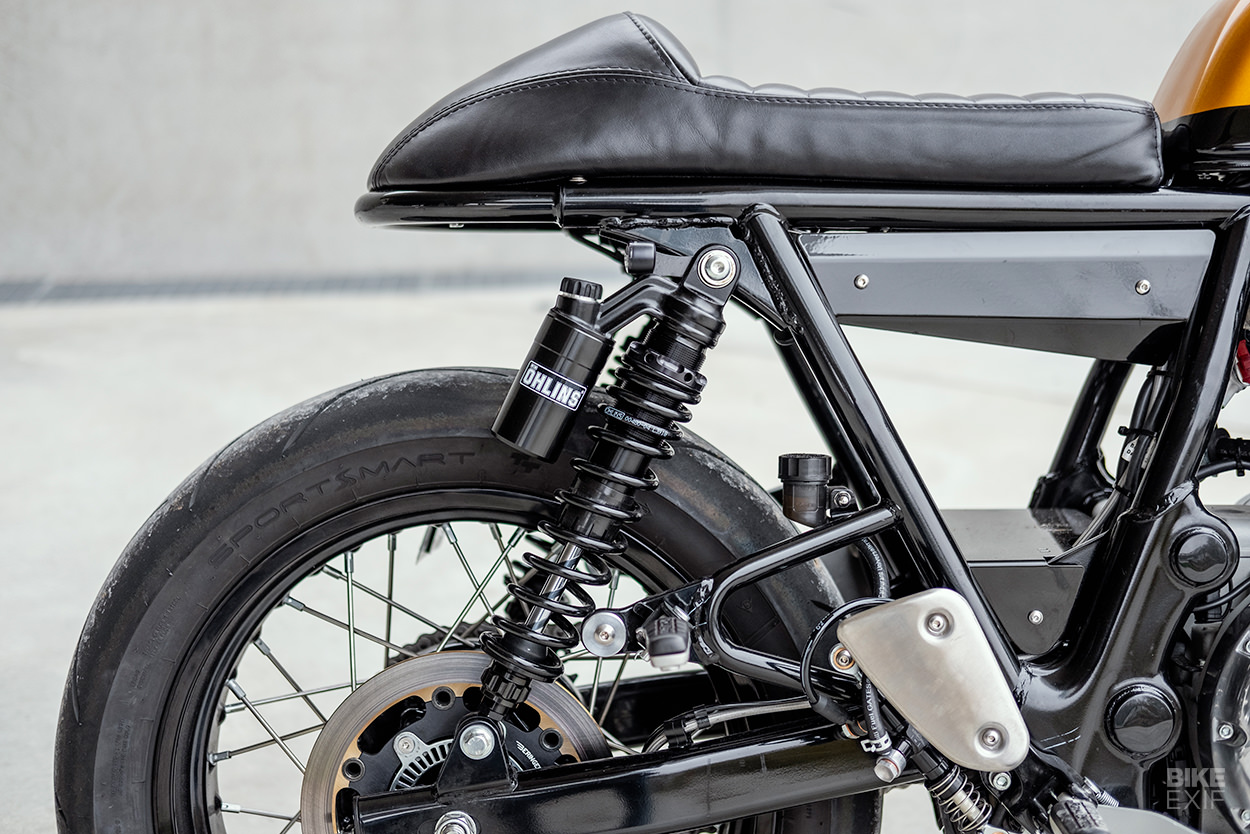 The bulky stock battery has been replaced by a compact Solise lithium unit, hidden right under the seat, and new aluminum covers shield the air intakes.

To maximize the benefit of these mods, BAAK have installed a Power Commander V. It also keeps fueling smooth, and BAAK have programmed in a custom map. This is probably as far as you can push the 650 Twin engine without compromising reliability or drivability. “It accentuates the sportiness without falling into an arms race,” they say. 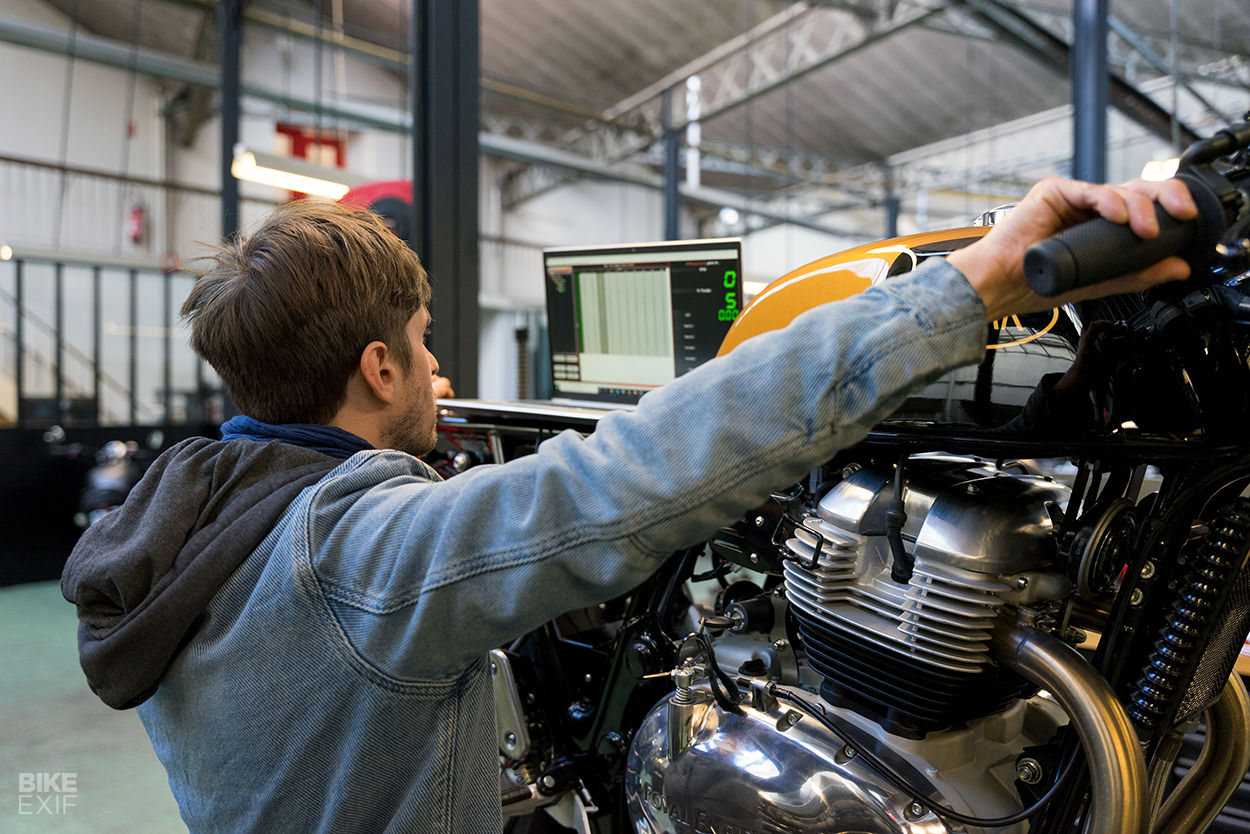 The suspension of the factory Continental GT is fine for commuter use, but a little soft and unfocused when you start pressing on. So BAAK have fitted blacked-out Öhlins forks, using new triples machined up in-house.

The brake system is upgraded to Beringer, for more effective stopping (and a luxurious feel). New 17-inch rims have been laced to the stock hubs, for better handling and tire choice. 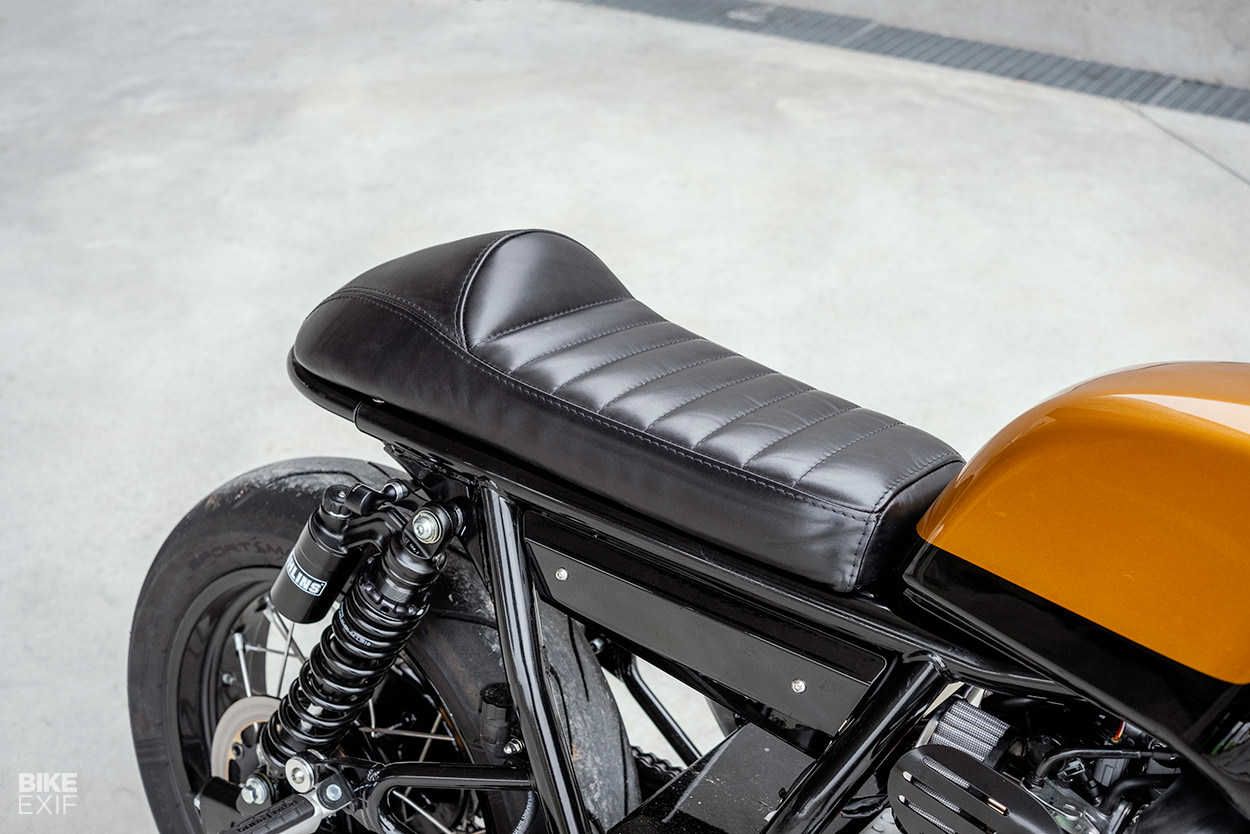 Öhlins piggyback shocks hold up the new and very neat rear subframe and seat. “The seat is a custom job, based on our ‘short kit’,” Adrien explains. “The frame has been cut and shortened, and the seat is a prototype made by our saddlers. Commercialisation is on its way! It’s made of the same nice leather we use for other products.”

At first we thought the tank was modified, but it’s actually stock—an illusion created by a clever two-tone paint design. It’s the work of in-house designer Thibault and BAAK’s master painter, with the deep black and luscious orange creating a 3D effect.
. 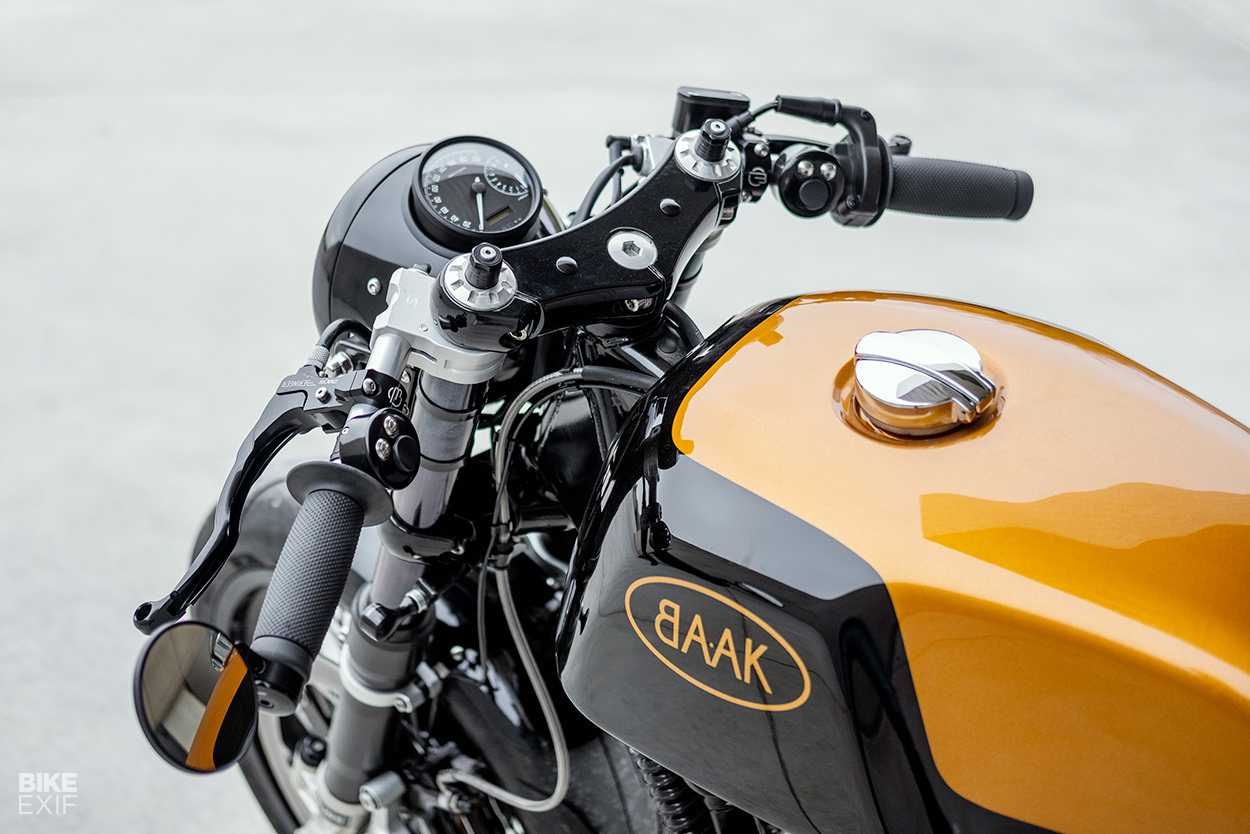 The more you look, the more details come to light: such as the LSL clip-ons, the minimalist turn signals, and the stubby front fender on a custom mount. The headlight with an integrated Daytona gauge is an especially neat touch, and will soon join BAAK’s extensive online catalog.

It’s one of the best real-world Royal Enfield customs we’ve seen lately. In Europe, BAAK can build one for you right now, and BAAK’s Los Angeles workshop is working on a version too—but keeping the factory fork this time. Interested parties, form a queue. 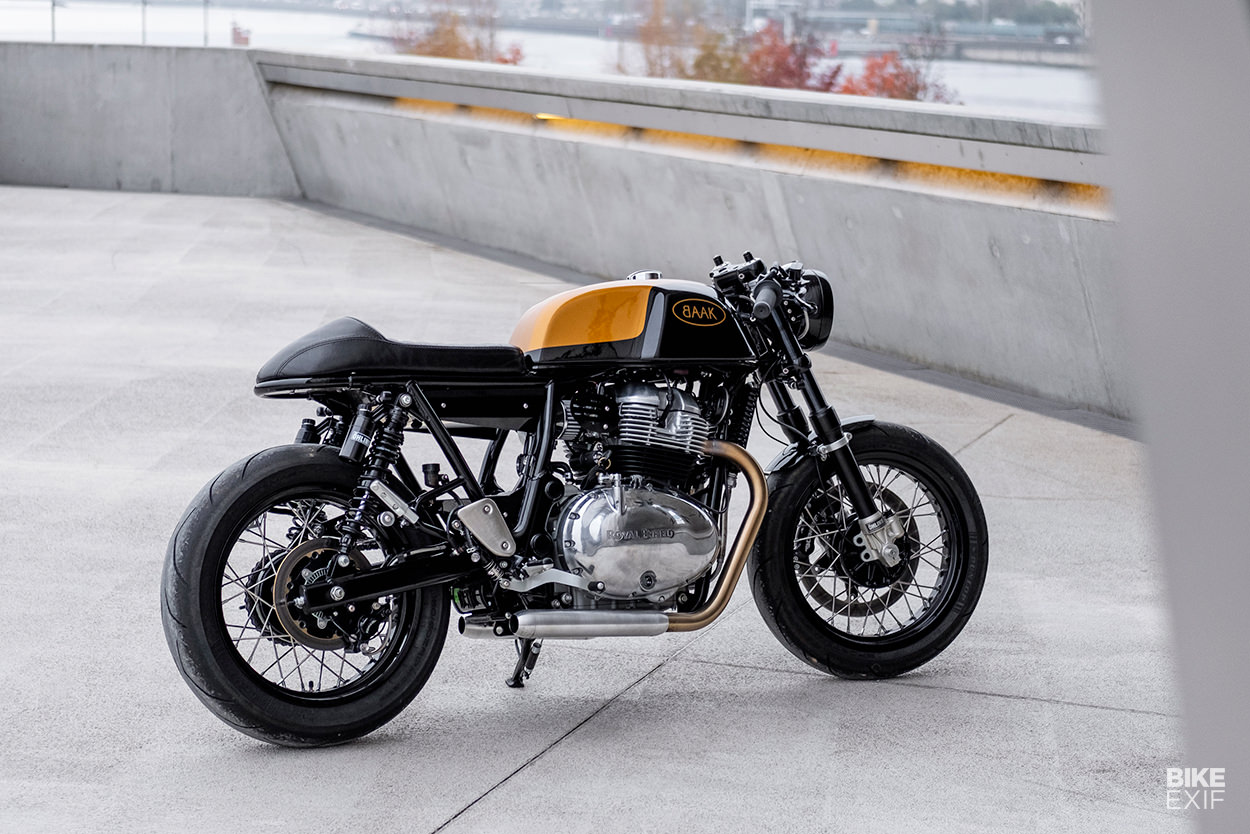