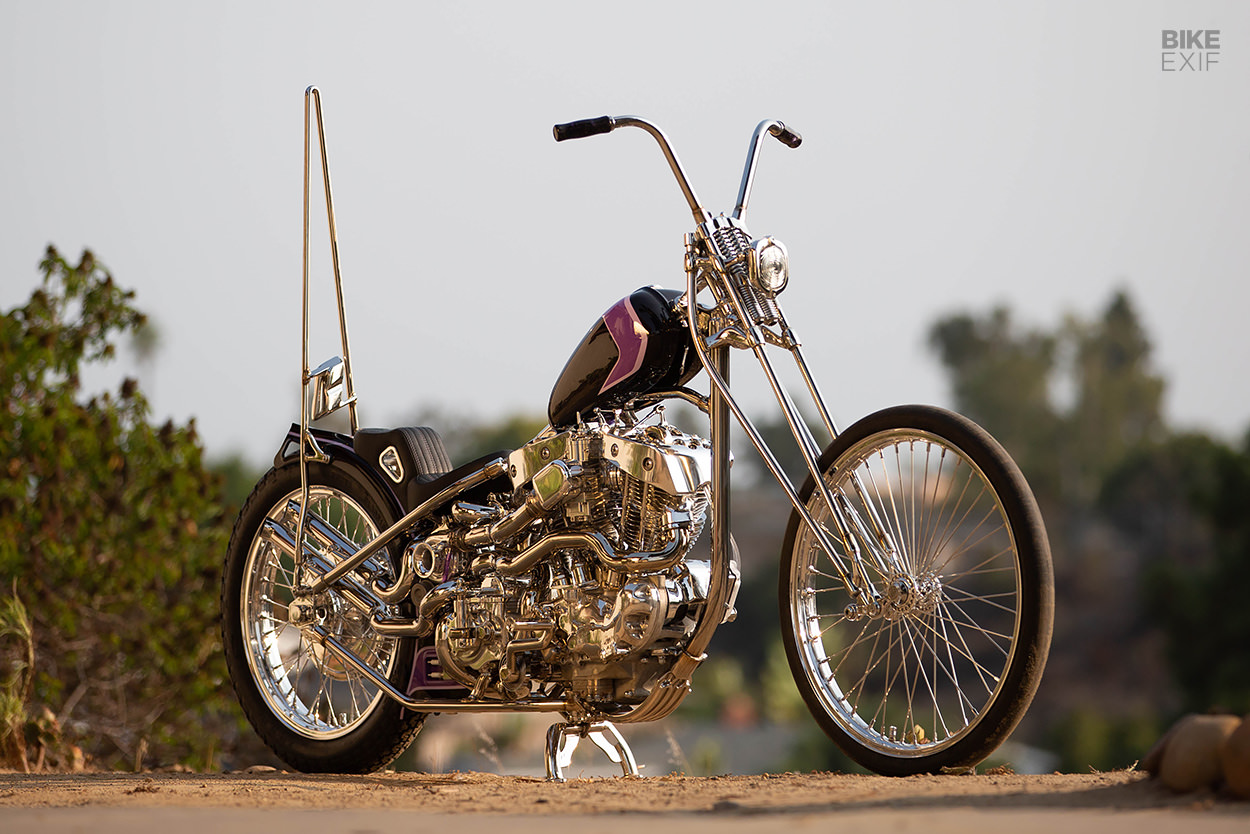 Four years ago, Christian Newman turned up at the Born Free show with a Knucklehead chopper, and left with the People’s Choice award. He’s had an open invitation to the show ever since, but he hasn’t accepted it—until now.

Born Free 12 kicks off tomorrow, and Christian’s pulled out all the stops with his latest entry: an eye-popping turbocharged Harley-Davidson chopper. And in case you haven’t figured it out by looking at it, this bike is almost entirely scratch-built. Heck, even the motor is mostly custom. 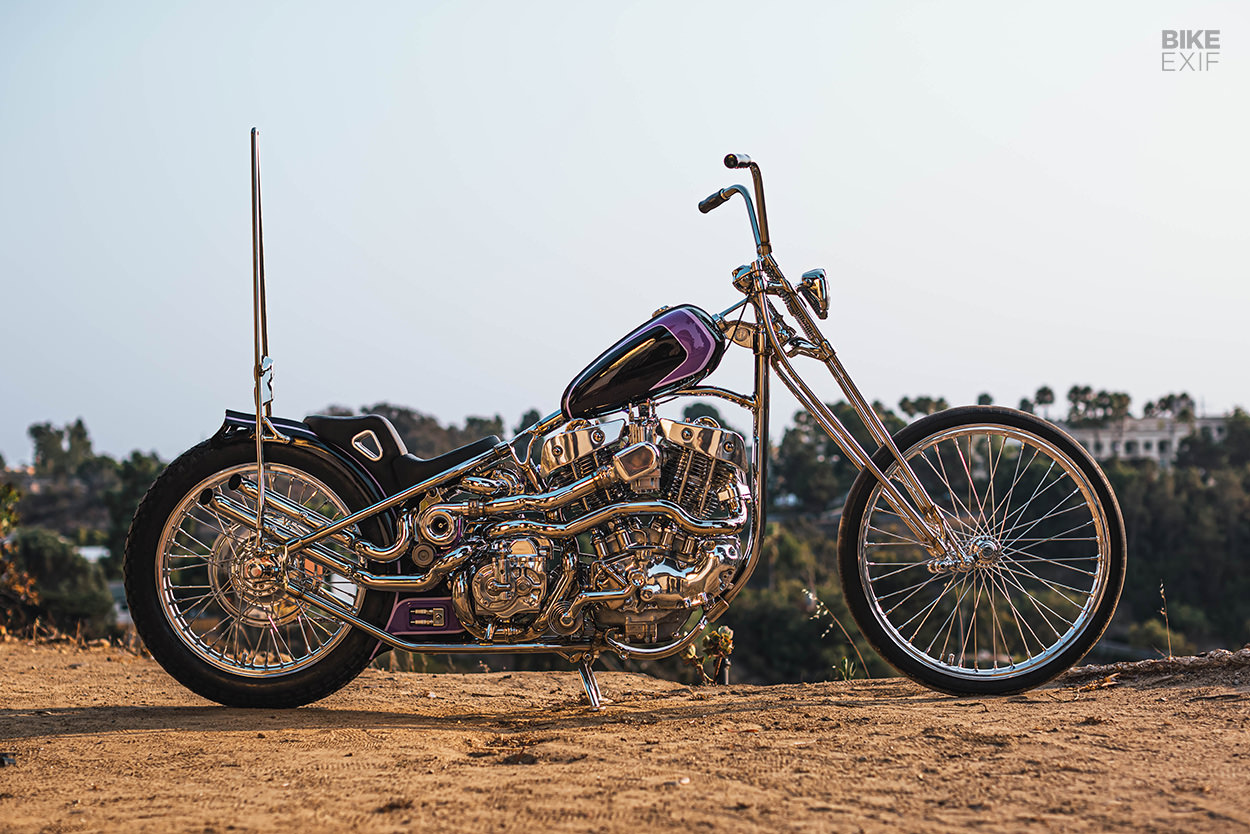 Born in Texas but based in Buffalo, NY, Christian’s a full-time mechanical engineer—designing mining equipment during the day and building bikes after hours. “Almost all of the other hours,” he quips. He’s been at it for just over a decade now, and is about to launch a small boutique parts company.

Christian loves finding elegant and complex solutions to simple problems in his work, and that ethos is painted all over this chopper. But as intricate as it is, it was built with singular focus. “I had a pretty clear vision from the onset,” he says. “I do a lot of planning, drawing and design.” 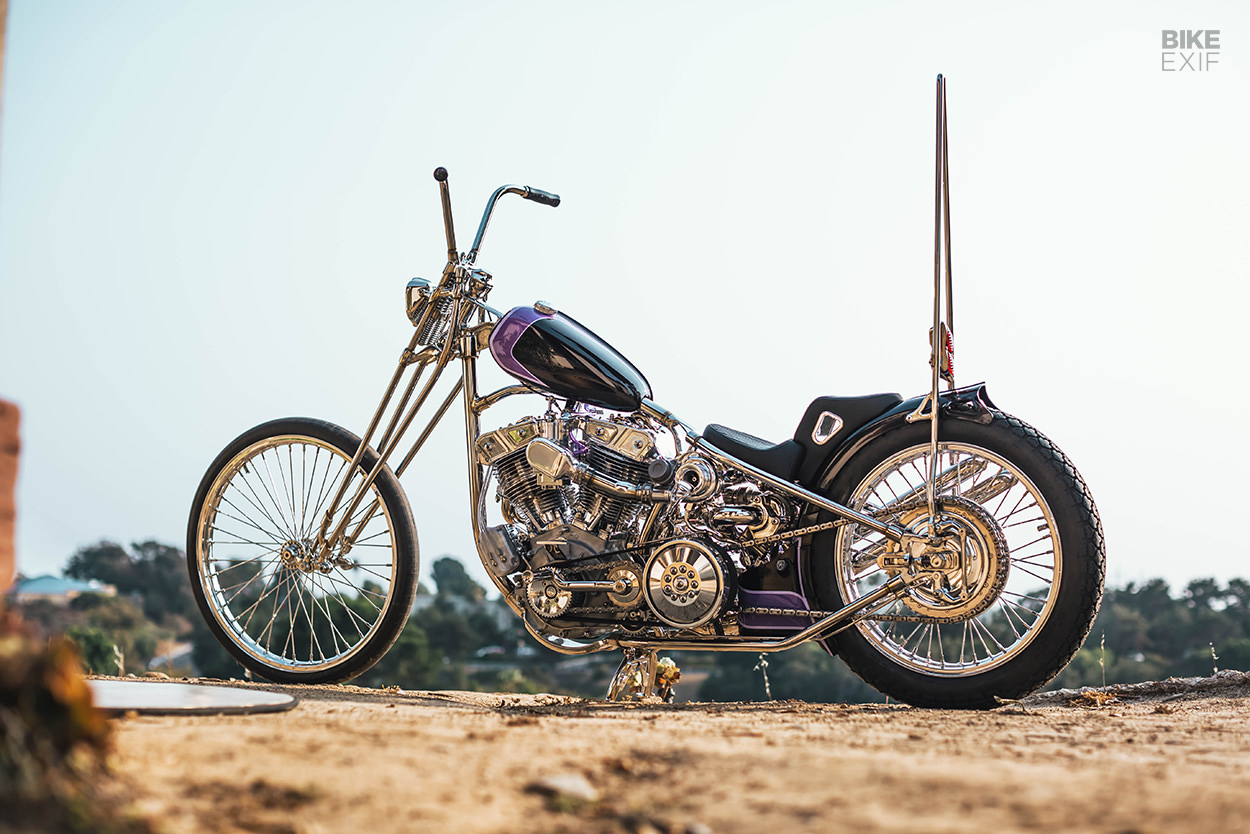 At the heart of the bike are the remnants of a 1939 Harley-Davidson Flathead motor. Christian started with a complete mill, but in the end kept only the cases, a few gears and parts of the oil pump. Everything else was found at swap meets, obtained from friends, or, in most cases, made from scratch.

Christian mixed in a pair of modified Panhead cylinders with 3.5” Evo pistons, custom pushrods and custom cams from Leibenweber. Other parts include the flywheels from a 1940 Knucklehead, and upgraded oil pumps from Calas-HP. 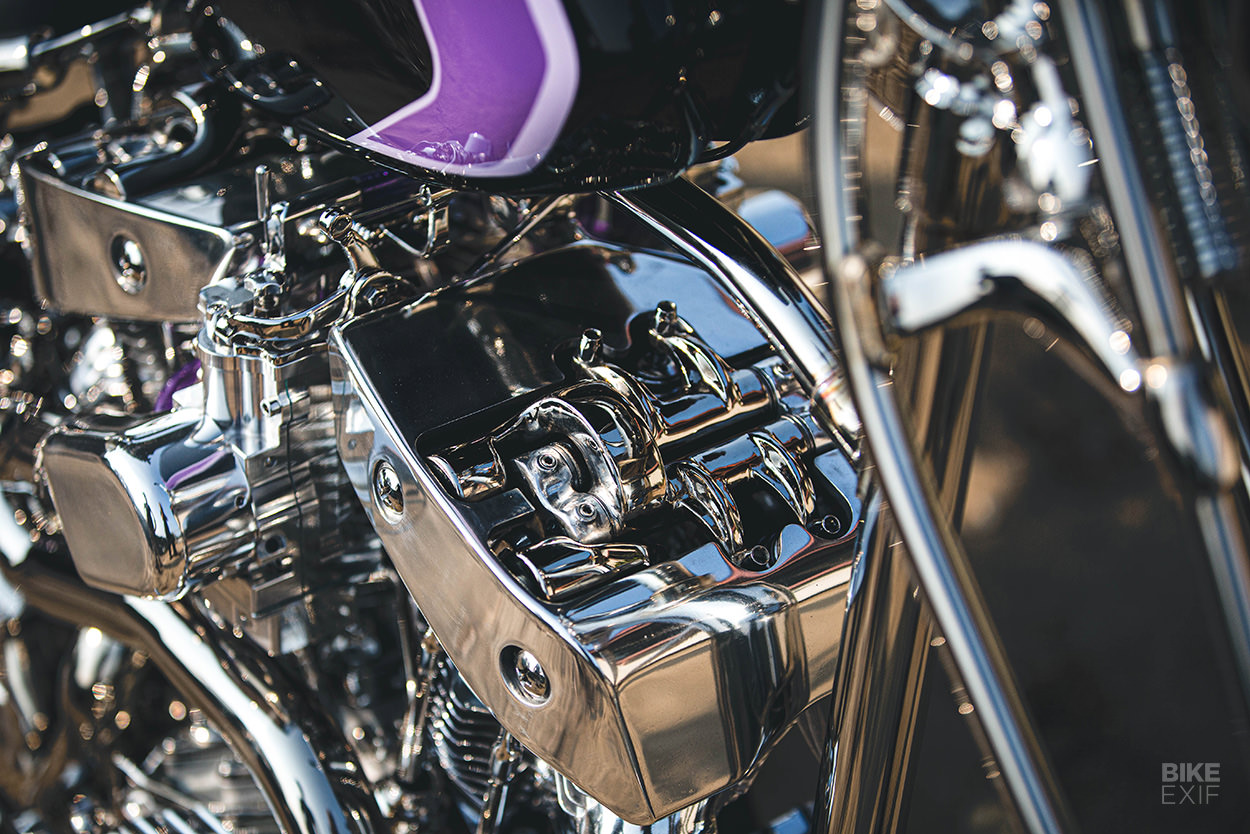 If you don’t recognize the four-valve heads, it’s because they’re one-offs. Christian designed the whole system, then had castings made for the heads, rockers and rocker boxes. Ferrea manufactured the valves to Christian’s spec; the valve springs were custom wound and the guides are one-offs too.

The valve seals and retainers are Mazda parts, and the tappet adjusting screws are from an Acura RSX. “The final machining was done by my friends at Gigacycle,” Christian tells us, “and another friend, at BA Enterprises, did a lot of the work on the bottom end.” 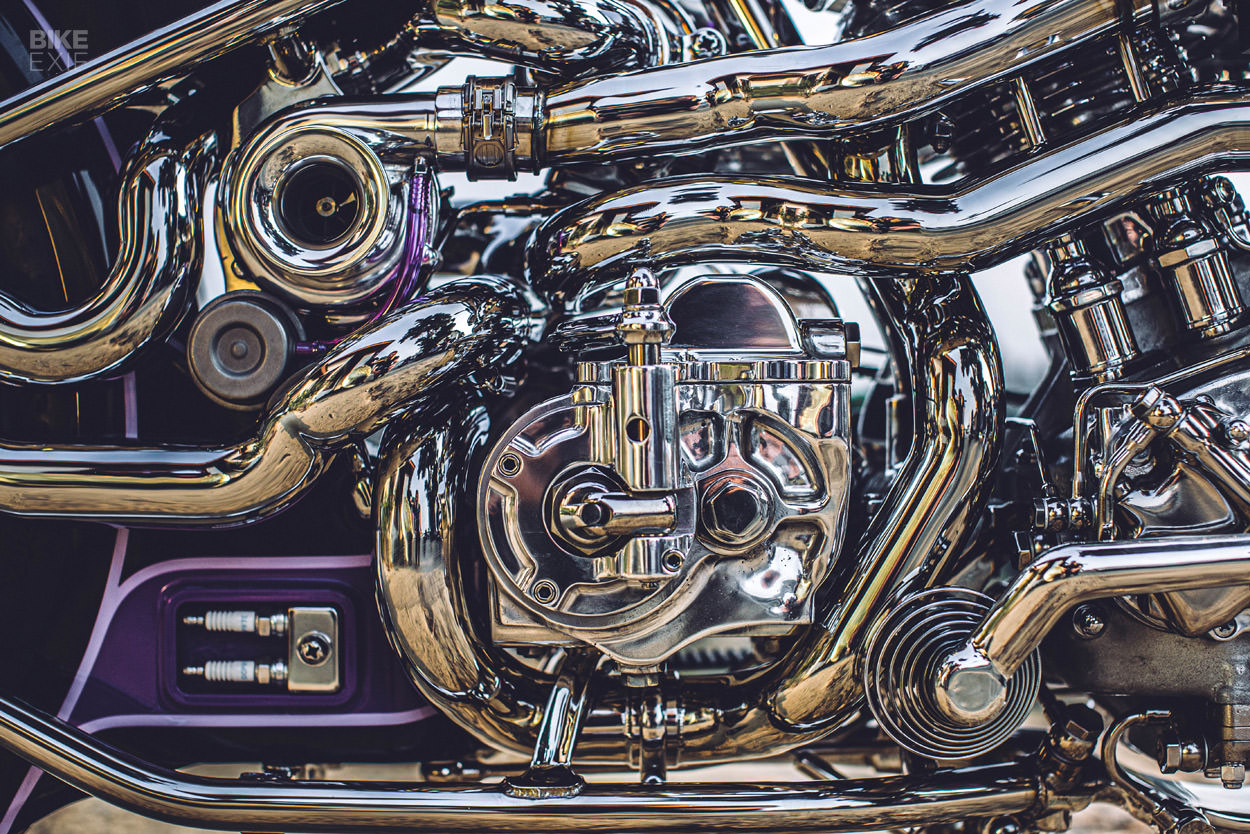 Naturally the intake system’s pretty complex too, with four intake runners between the two heads. It’s set up that each 36mm SmartCarb feeds one front and one rear intake valve. Then there are the dual Garrett GT1241 turbos, which use hand-made stainless steel manifolds, down pipes and charge pipes.

For the transmission, Christian took a brand new four-speed casing and some gears from Baker, then modified the daylights out of them. 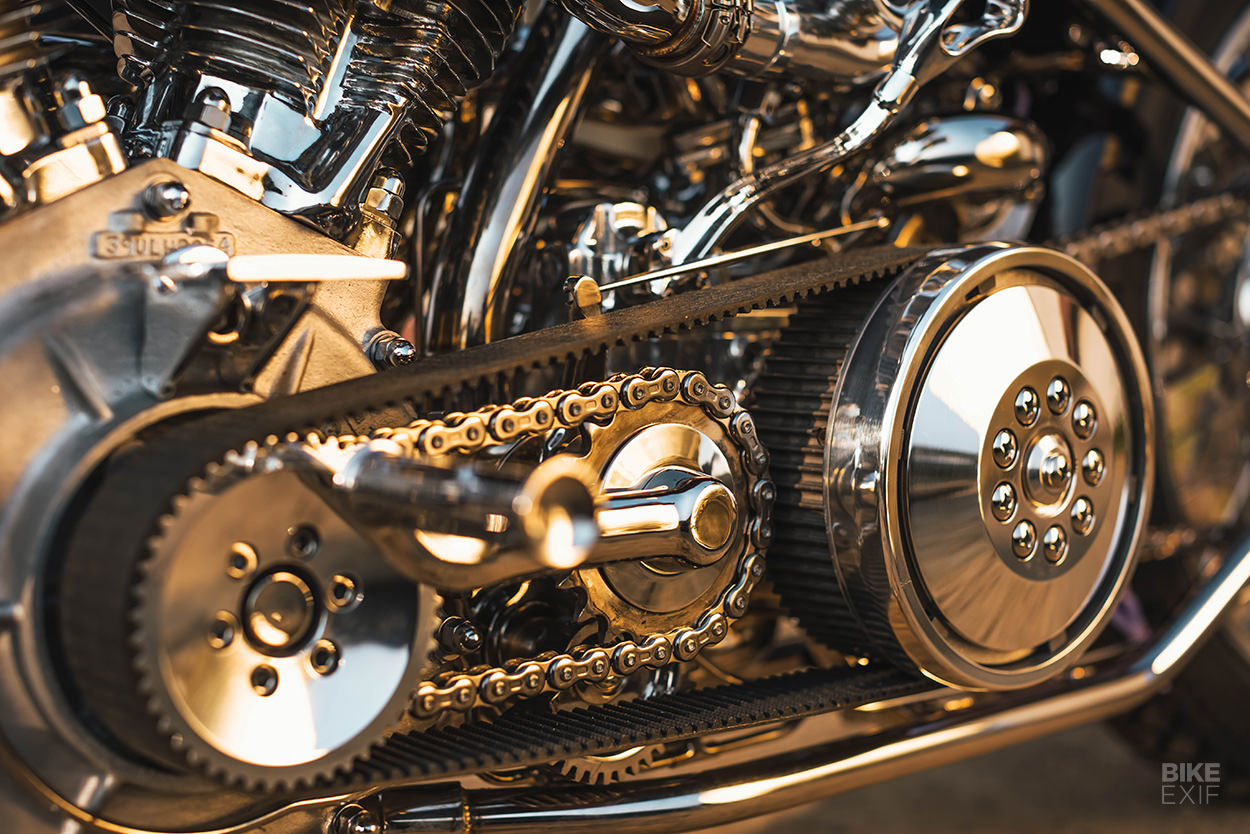 From the modded clutch basket to the custom-made hand shifter, there’s not a single inch on this drivetrain that’s off-the-shelf. Even the kickstart system is a one-off; the brake lever rotates backwards to become the kickstart lever.

All the wiring’s fresh too. The setup includes an 18-amp stator, a Morris magneto, a 14V AC voltage regulator and no battery. FNA Customs supplied the magneto cap. 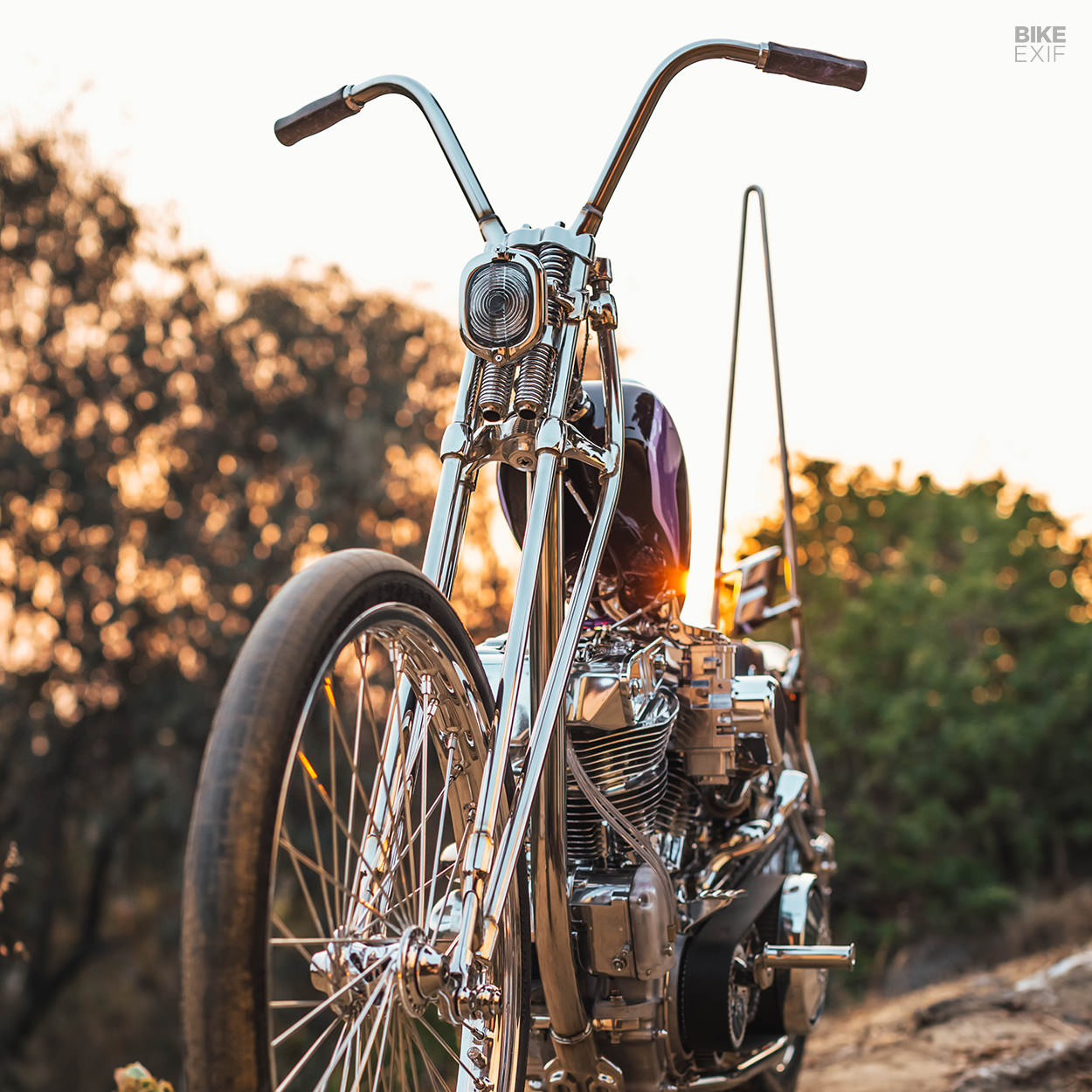 Everything’s mounted to a custom-built and hand-polished single loop stainless steel hardtail frame. The frame tubes double as oil lines, with the oil cooler integrated into the engine cradle. Even the center stand is shaped so that it ‘merges’ with the frame when retracted.

Christian fabricated the springer front end out of stainless steel, along with the bars, which run with an internal throttle and his own acrylic grips. The hubs are custom too, and are laced to 23F/19R rims with Buchanan’s spokes. Say a prayer, because there’s only one brake: a custom twin leading shoe drum setup at the back. 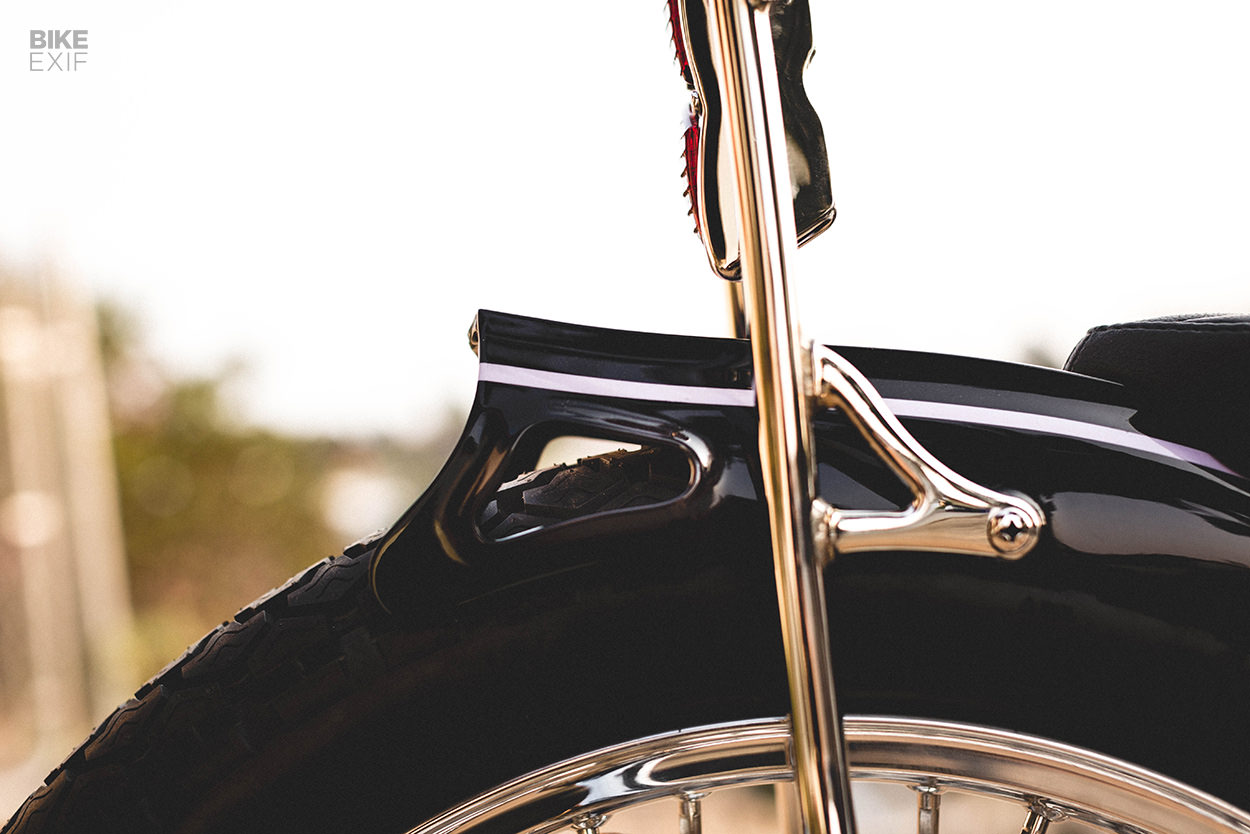 Cristian Sosa at Sosa Metalworks lent a hand with shaping up the chop’s custom fuel tank, oil tank and rear fender. Christian then shaped a seat pan and fabricated the seat’s metal detailing, while New Church Moto handled the upholstery.

Out back is a stainless steel sissy bar, with internal wiring to the custom taillight. Christian fabricated the housings for both the front and back lights himself, with a 1949 Mercury parking light lens up front, and a 1940 Dodge lens at the back. 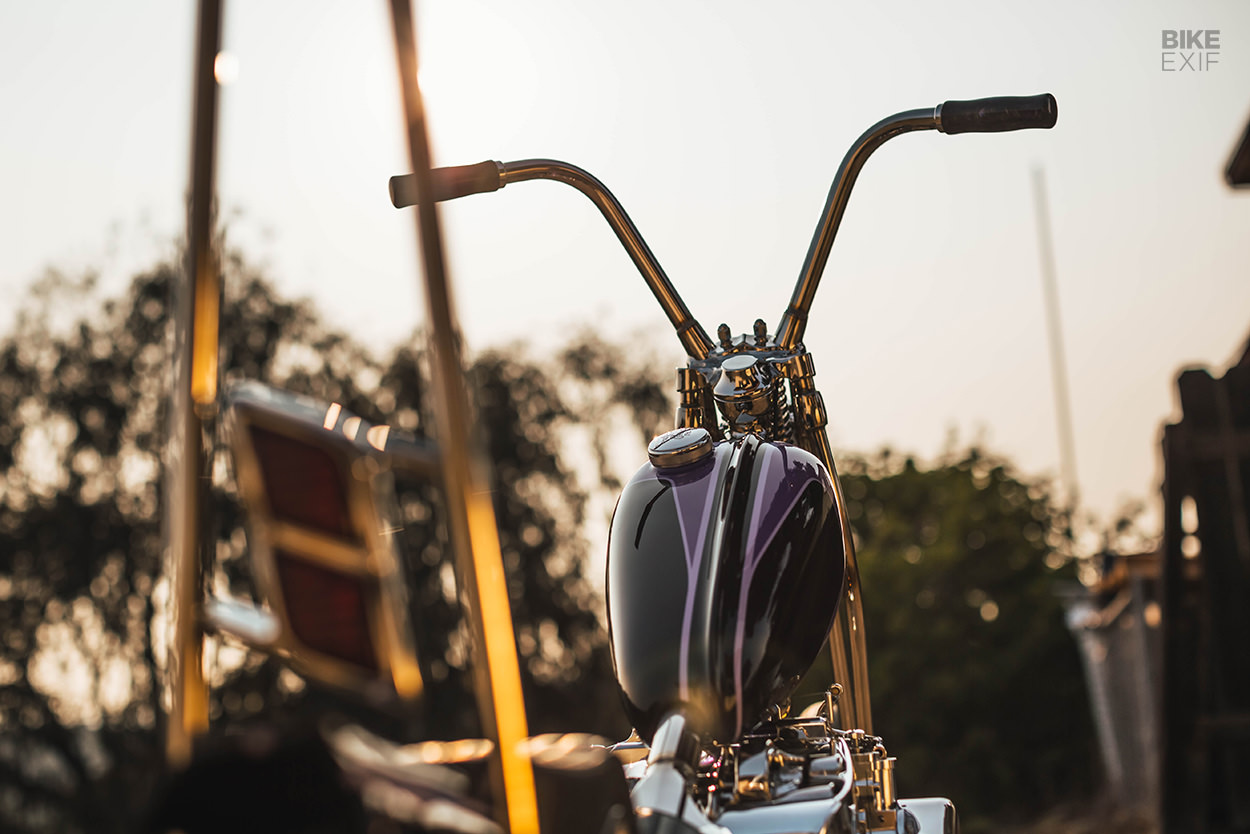 Krossover Customs laid down the immaculate paint—which not only has purple details, but a purple base coat that pops in sunlight. As a finishing touch, Christian embedded a 1939 half-dollar coin on the left engine casing, and a 2020 coin on the right of the steering neck.

There’s a laundry list of smaller details we’ve left out, because there’s just so much to digest here. “In case it wasn’t clear, there are probably only a handful of parts that weren’t made or designed by me,” says Christian, wryly. 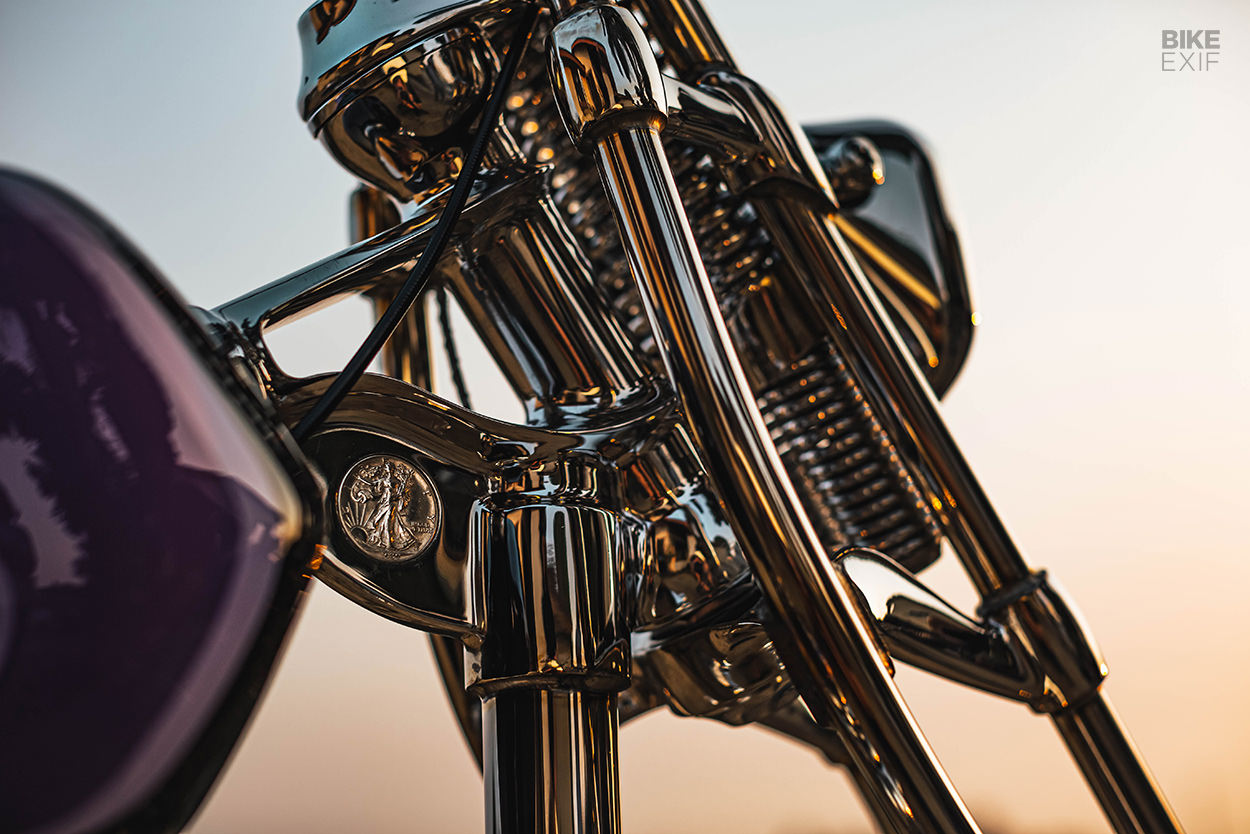 Choppers are a rare sight around here, but Christian’s work is too good to ignore. We’re still poring over photos and finding new angles to admire. He’s joked that he wants to build a cafe racer at some point, just to rile people up—but we’re secretly hoping he follows through with it. 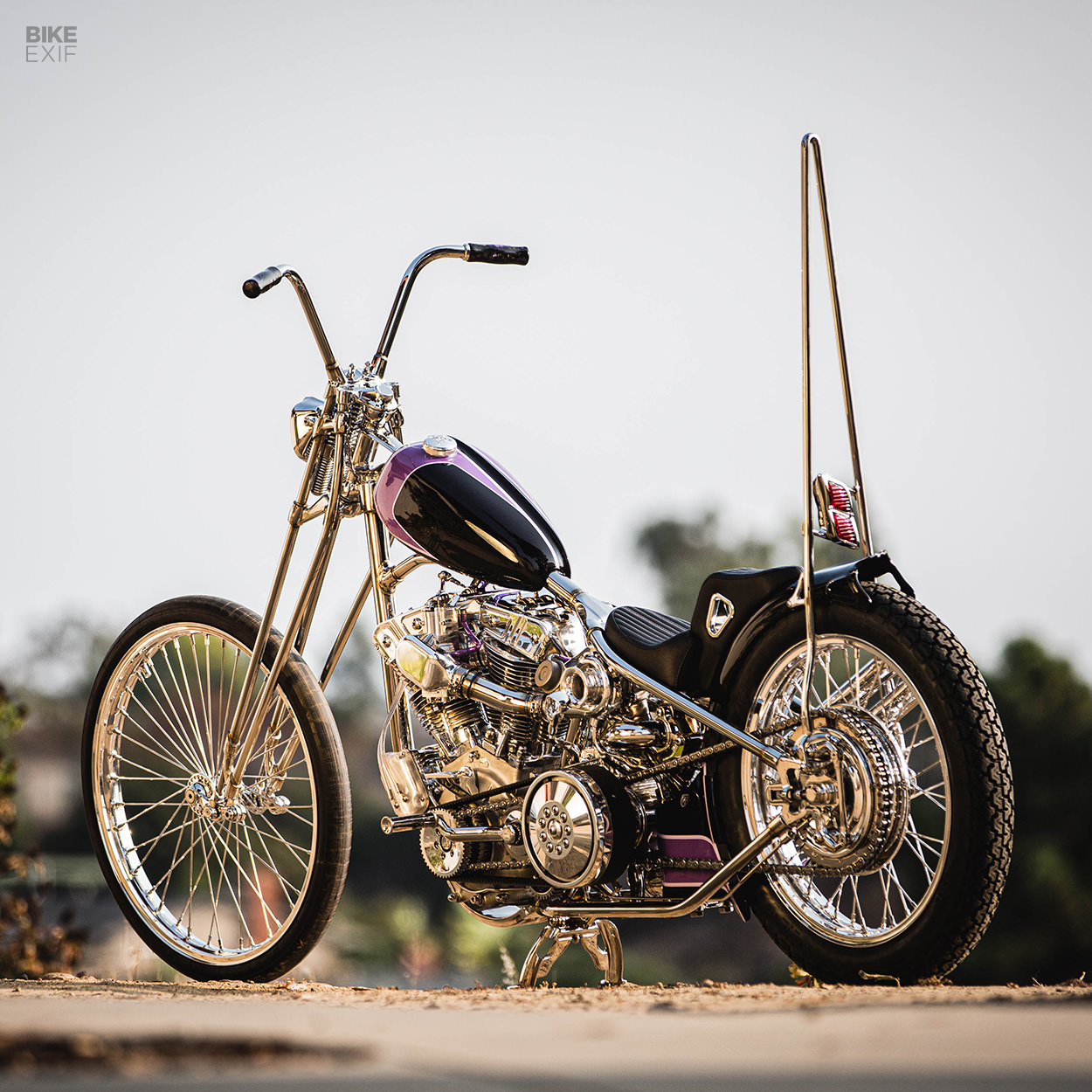