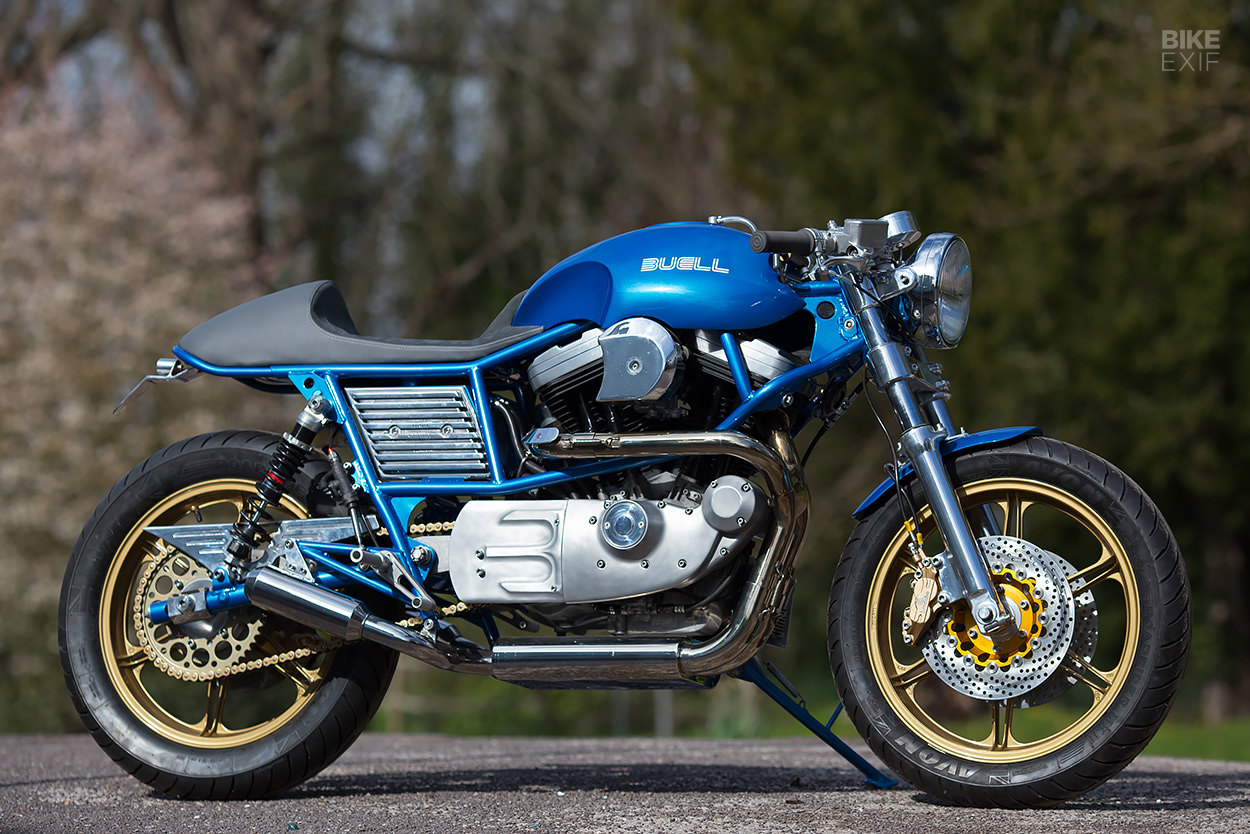 How do you wedge a Buell Cyclone engine into a Ducati Pantah frame? According to Tom Simpson of England’s Foundry Motorcycle Workshop, you don’t. Which is exactly why almost everything on this scintillating Buell-powered café racer is scratch built.

Let’s rewind: almost six years ago, Tom was busy building a Ducati 600 TT2 replica, using parts scalped from a Pantah. “The customer showed up asking what we could do with the leftover parts from his donor bike,” says Tom. “He had a thing about trying to shoehorn a non-Ducati engine into the Ducati frame, and we had numerous conversations about what may or may not fit.” 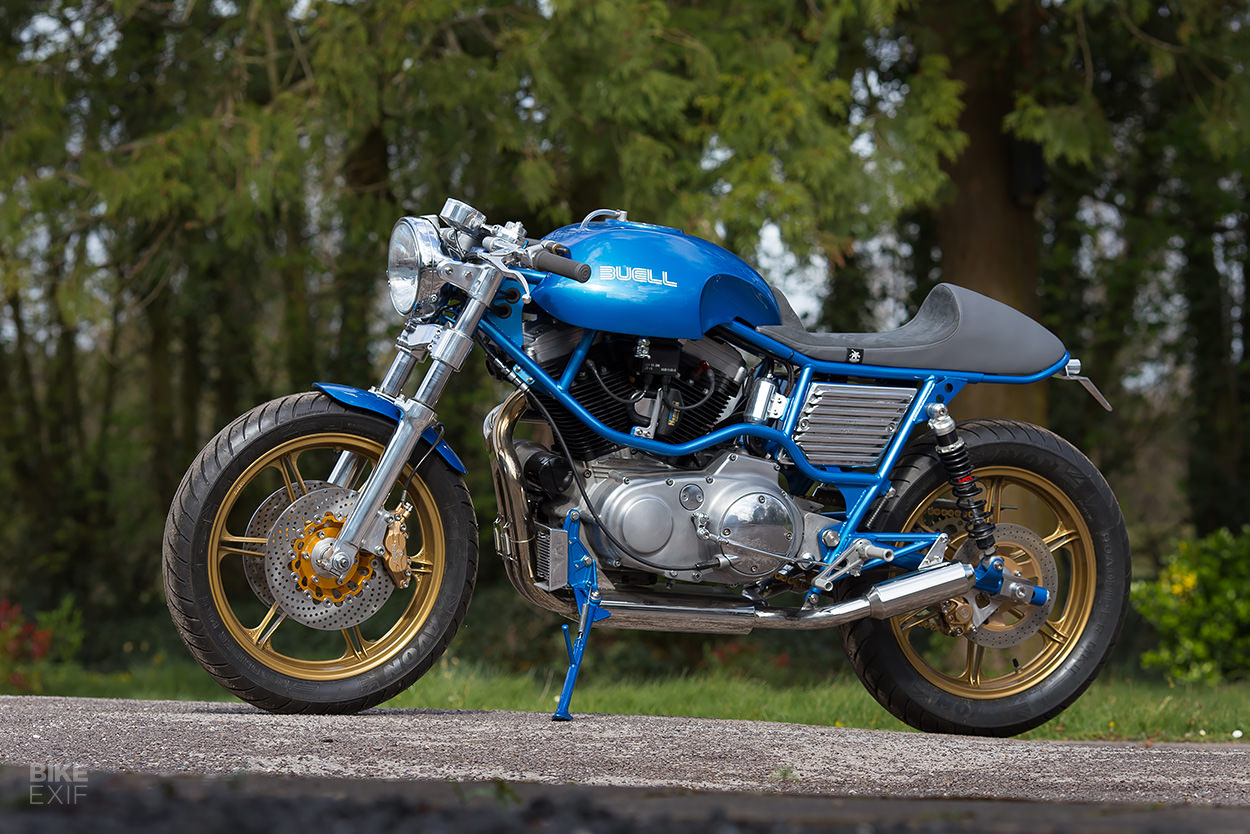 “Foolishly at some point I mentioned the word Buell, knowing full well it wouldn’t be even close to fitting. I’ve been a fan for years, having owned a few, but I did not expect a phone call saying that he’d bought an M2 Cyclone, and it would be delivered directly to me the following week.”

“A pretty neglected bike subsequently arrived—but luckily the engine was good. That was the start of a long and arduous, but ultimately very rewarding, journey.” 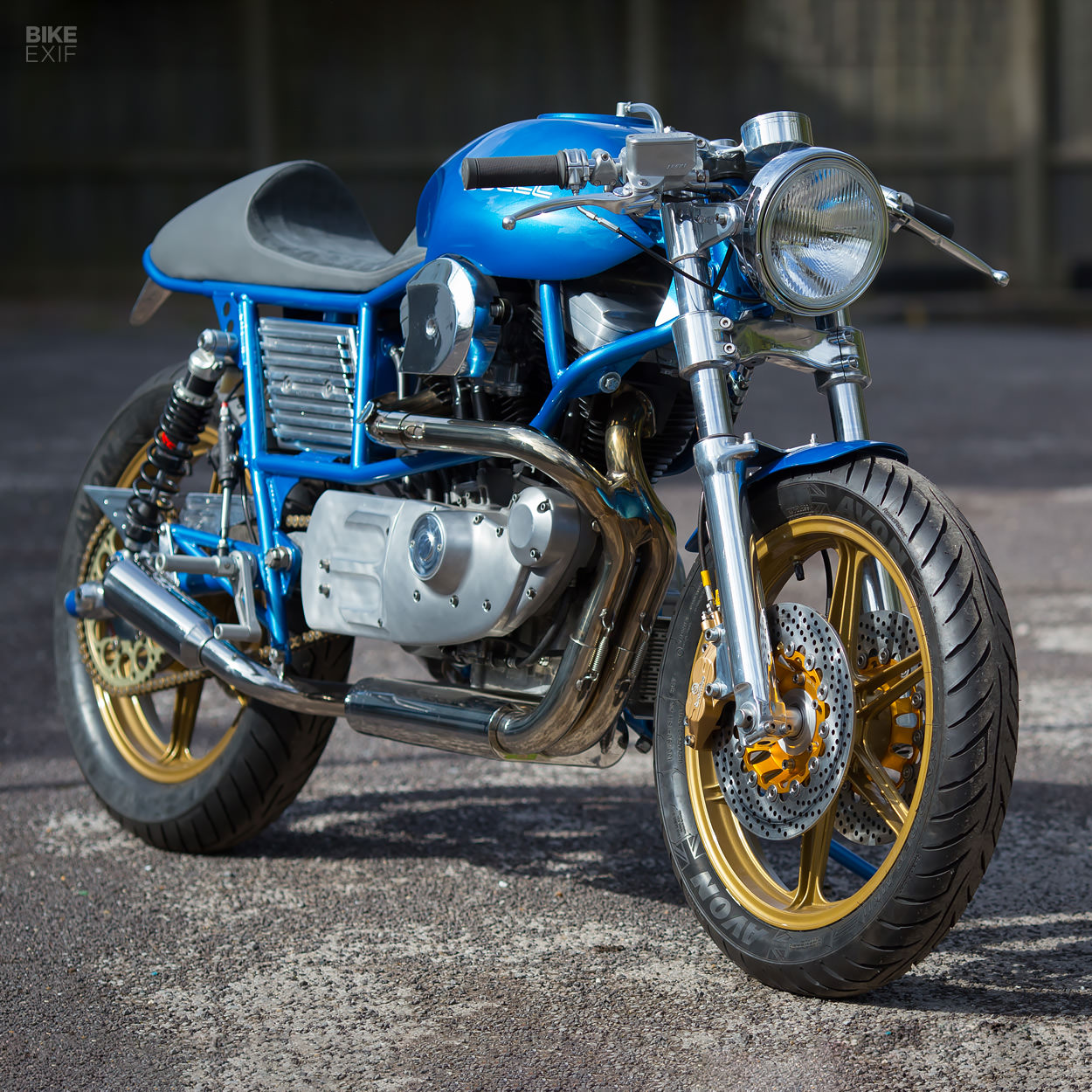 Once Tom had the Buell engine in his frame jig, his fears were confirmed: there was no hope of making the concept work, even with substantial modifications. The client requested a custom frame in response, and Tom agreed—on the proviso that there was no time pressure. “I did milk that caveat somewhat,” he admits.

With nothing but the Cyclone’s 1,203 cc V-twin motor and forks, a set of Pantah wheels, Ducati 916 brake calipers and a new set of discs, the project finally kicked off in earnest. 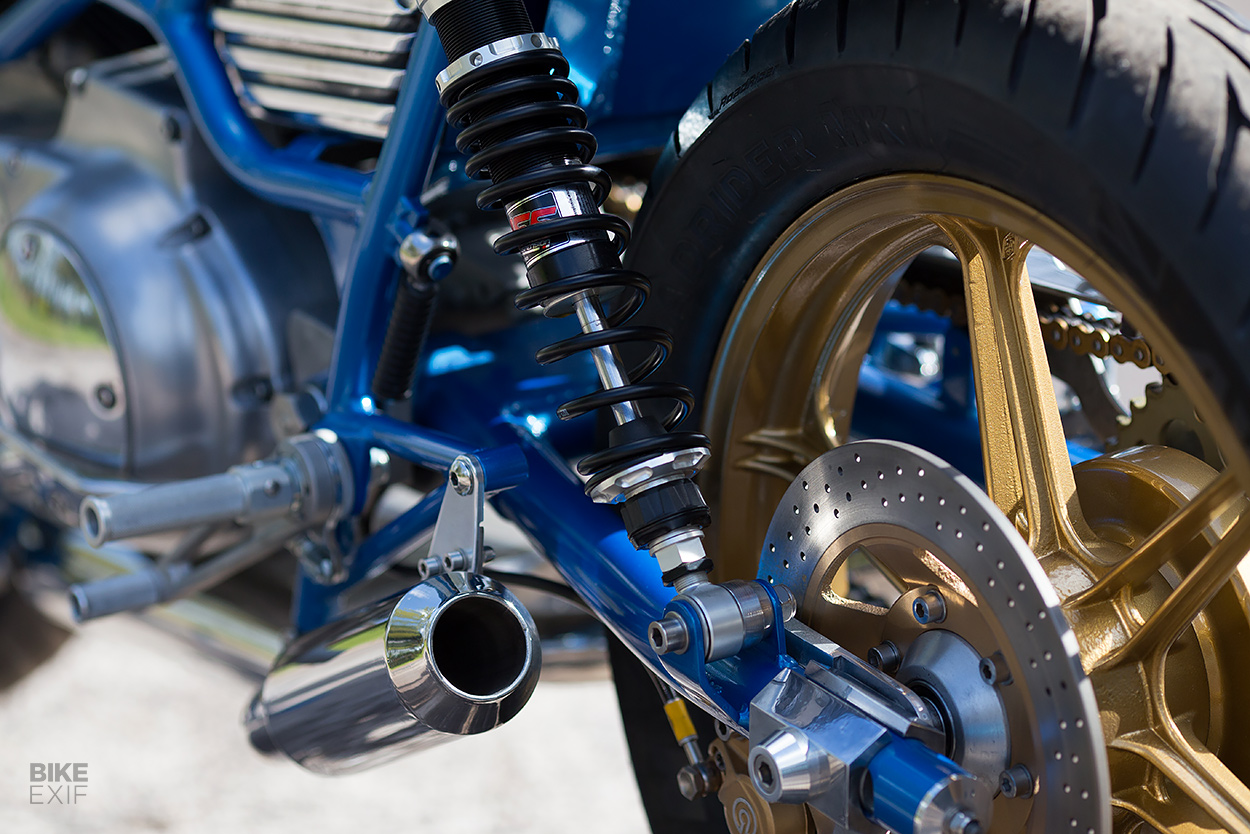 Using 1” stainless steel tubing, Tom fabricated a new frame that takes cues from the Ducati Pantah, but suits the proportions of the Buell mill. He built the swingarm too, using a mix of steel tubes, billets and sheets, and repurposing the original Pantah adjusters.

“The frame geometry is based on the original Buell,” Tom explains, “but the wheelbase is now approximately 25 mm longer. On the 18” rims with slimmer-than-original tires it feels enjoyably planted and is surprisingly relaxing to ride. As relaxing as it can be anyway, testing something you’ve put this much work into over such a long period of time.” 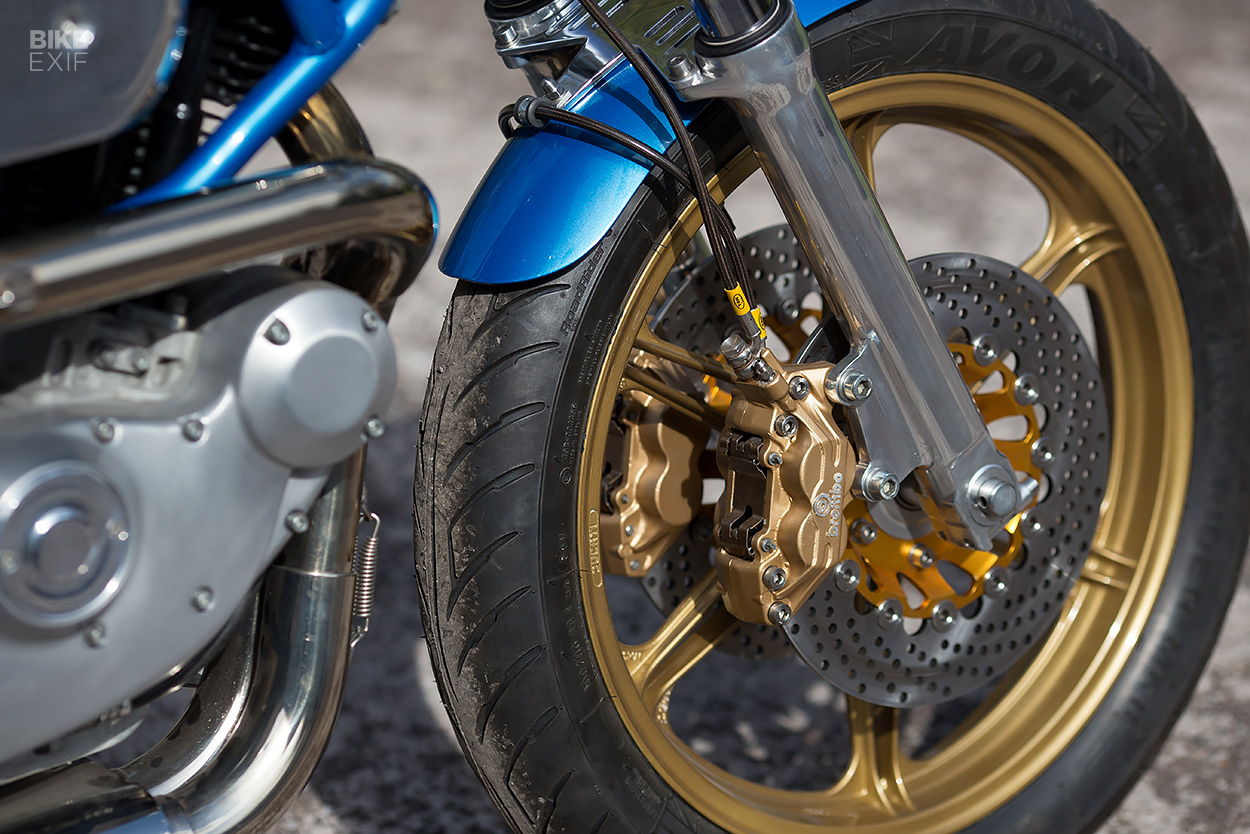 The chassis is propped up on a mixed bag of parts. Tom overhauled the Cyclone’s forks, and modified the lowers to accept the 916’s Brembo calipers. The yokes are heavily modified Ducati 996 numbers, and the steering damper is from another 916 donor.

New YSS shocks do duty out back. Combined with the adjusted forks and Pantah wheels, they’ve perfected the Buell’s stance. 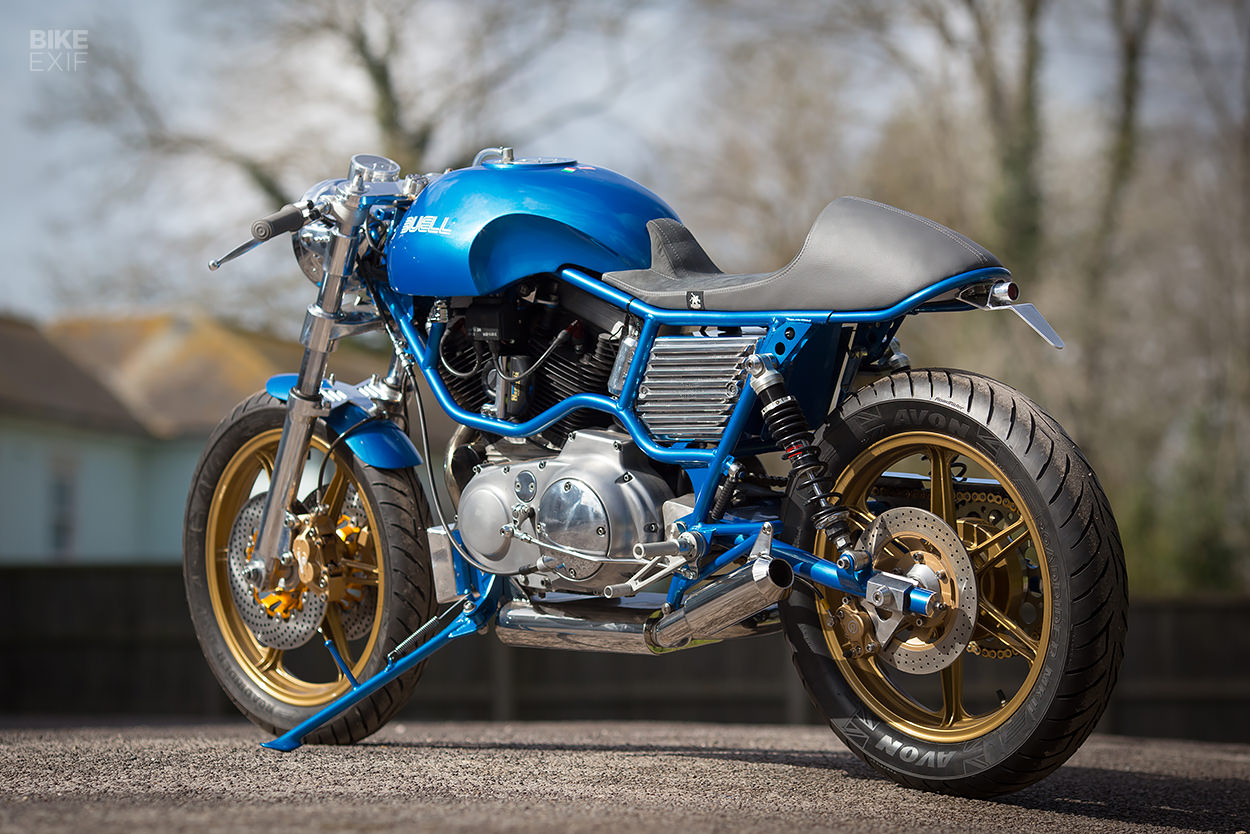 The frame isn’t the only hand-made piece though—Tom had to produce a number of parts, starting with the fuel tank. “The tank wasn’t particularly inspired by any other machine,” he tells us. “It really came about as a result of wanting it to have a tasteful shape that flowed into the seat area, fitted the owner’s legs, wasn’t too tall, could hold a sensible amount of fuel, and still look the way I think a café-style bike should.”

“For some unknown reason, I decided to see if I could make it in steel. I could, but it’s unlikely I’ll do it again. Aluminum is definitely the bike builder’s friend.” 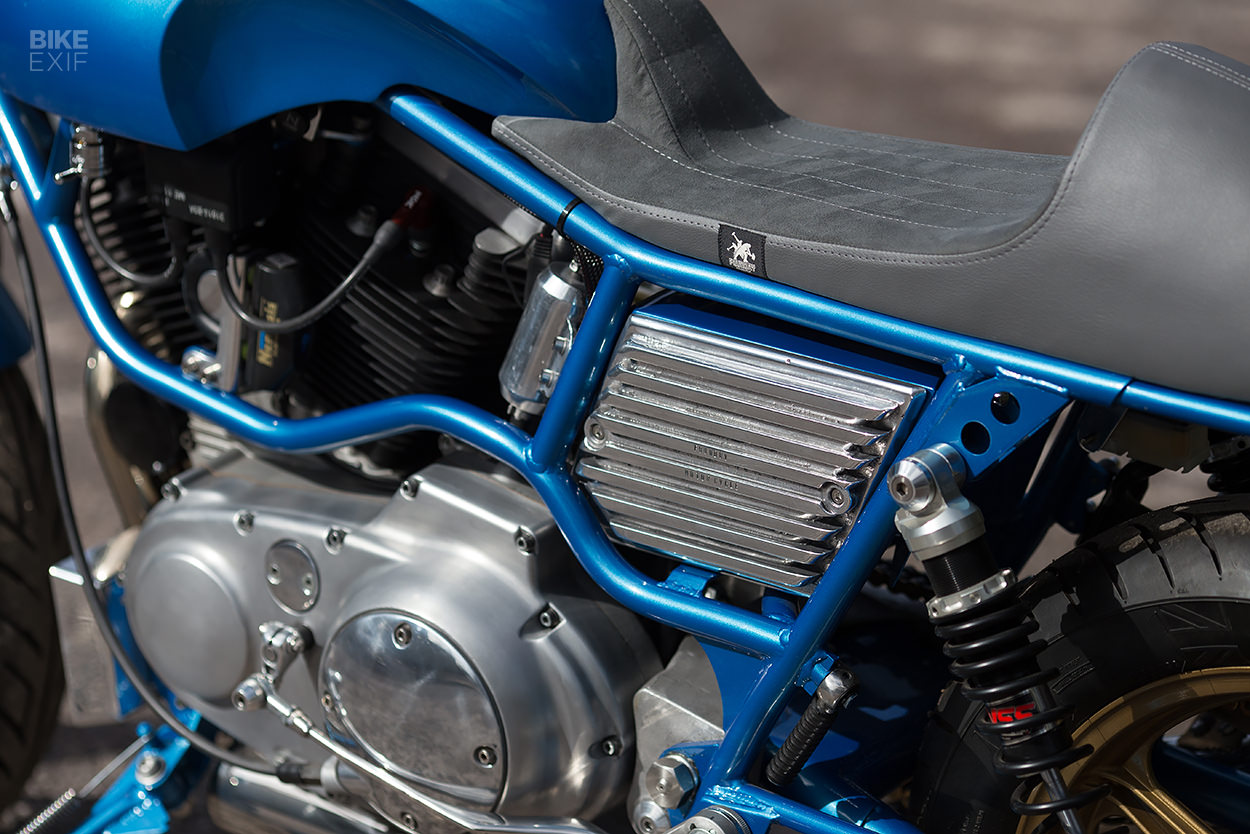 The owner wanted to retain the OEM Buell filler cap, so Tom worked that into the design. He also fabricated a front fender, a rear splash guard, and a taillight and license plate bracket. The seat’s also custom, and features grey upholstery from Trim Deluxe, with a tasteful hit of Alcantara.

Tucked under the seat are a hand-made oil tank with more capacity than stock, and a box for the electronics. The latter houses a Magnetti Marelli Lithium-ion battery, and a Motogadget mo.unit that’s been used to rewire the bike. 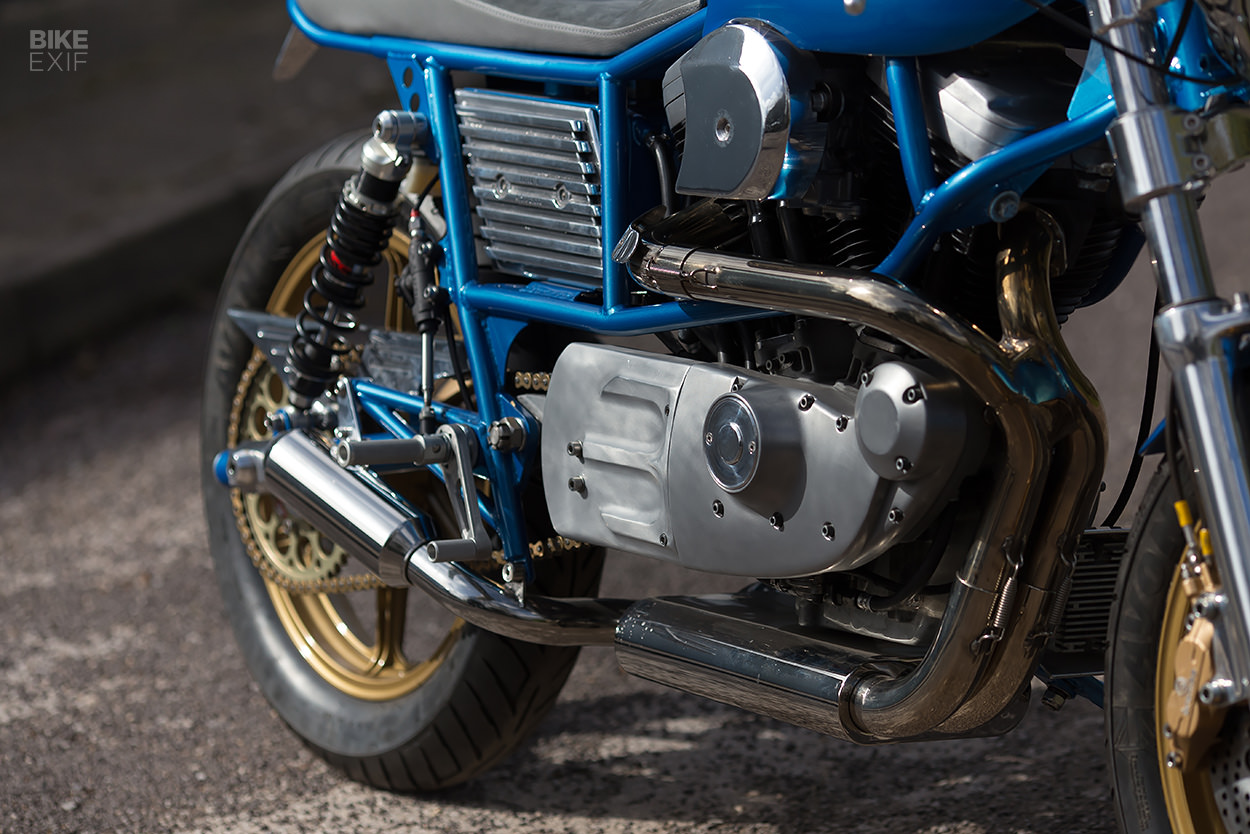 ‘Foundry’ isn’t just a random workshop name; Tom has a background as a blacksmith, and is adept at sand-casting parts. So that’s how he made the finned side covers that hide the oil and electrics boxes. Other handmade touches include the side stand assembly, chain guard and front sprocket cover.

On the right side is a custom air cleaner that uses a K&N filter, and a bespoke stainless steel exhaust. 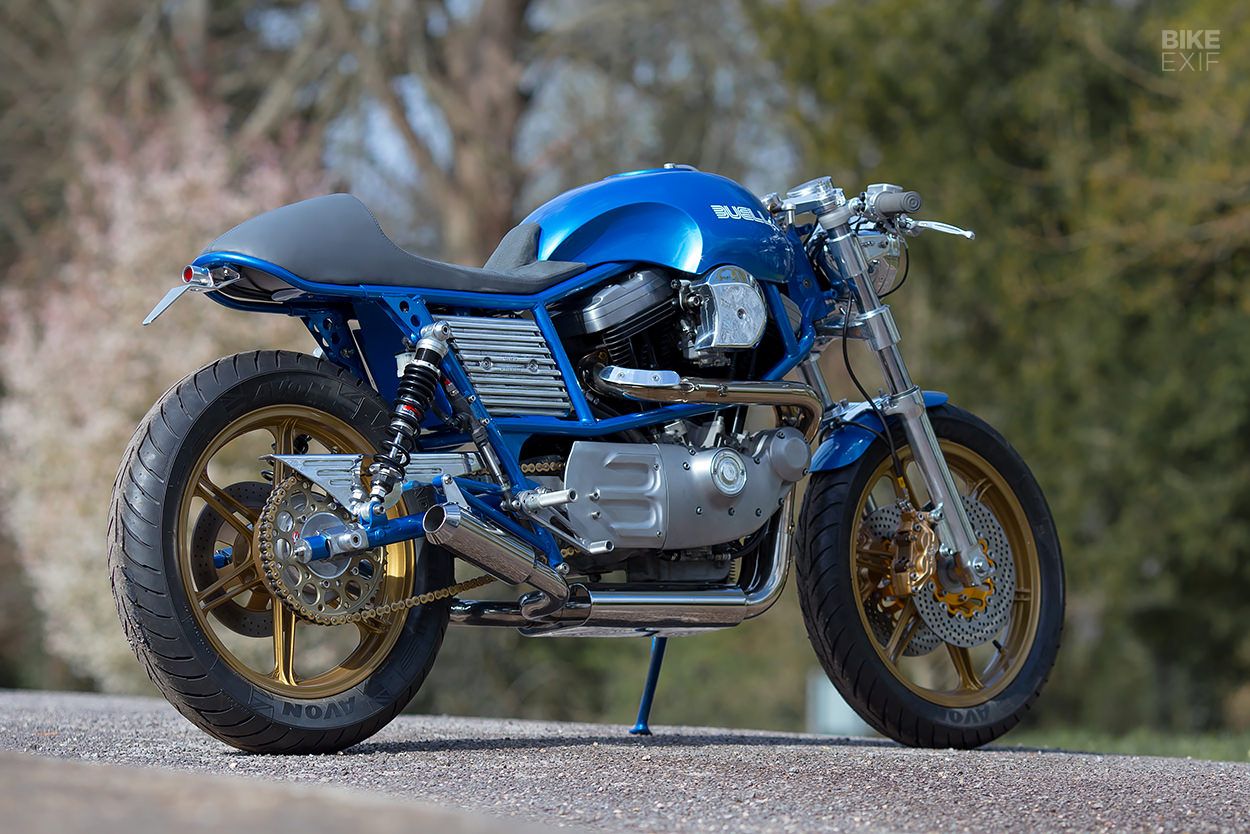 The list of off-the-shelf parts is relatively short, and includes Tarozzi clip-ons and rear-sets, a Motogadget speedo and keyless ignition, Biltwell Inc. grips, Kellermann turn signals and Motone switches. Tom scalped the levers from a Honda CBR600RR, and made the headlight ears himself.

This café racer also features one ultra-practical mod: a disc lock holder on the left side of the frame. 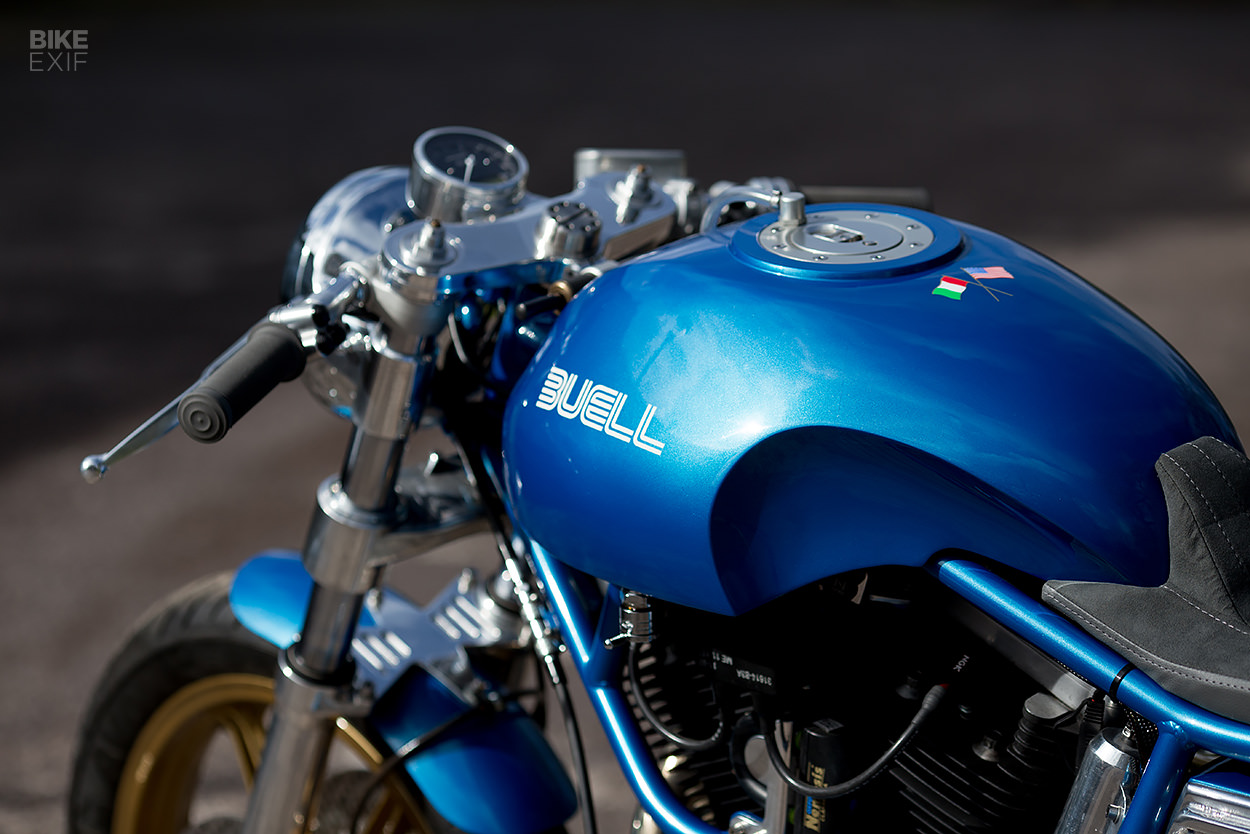 Tom’s original livery concept used a classic Ducati red—but the customer wanted blue instead. So Tom picked a classic Shelby Daytona color, ‘Guardsman Blue,’ which was masterfully executed by S.Jago Designs. The Buell logo was recreated in a period-correct Ducati typeface, and American and Italian flags were added on top of the fuel tank, as a nod to the mixed origins of the parts used.

AM Metal Polishing added some glimmer to the build, while the auto coating specialists Freshlayers covered the rear half of the tank in a protective film, to protect it from zippers and buttons. 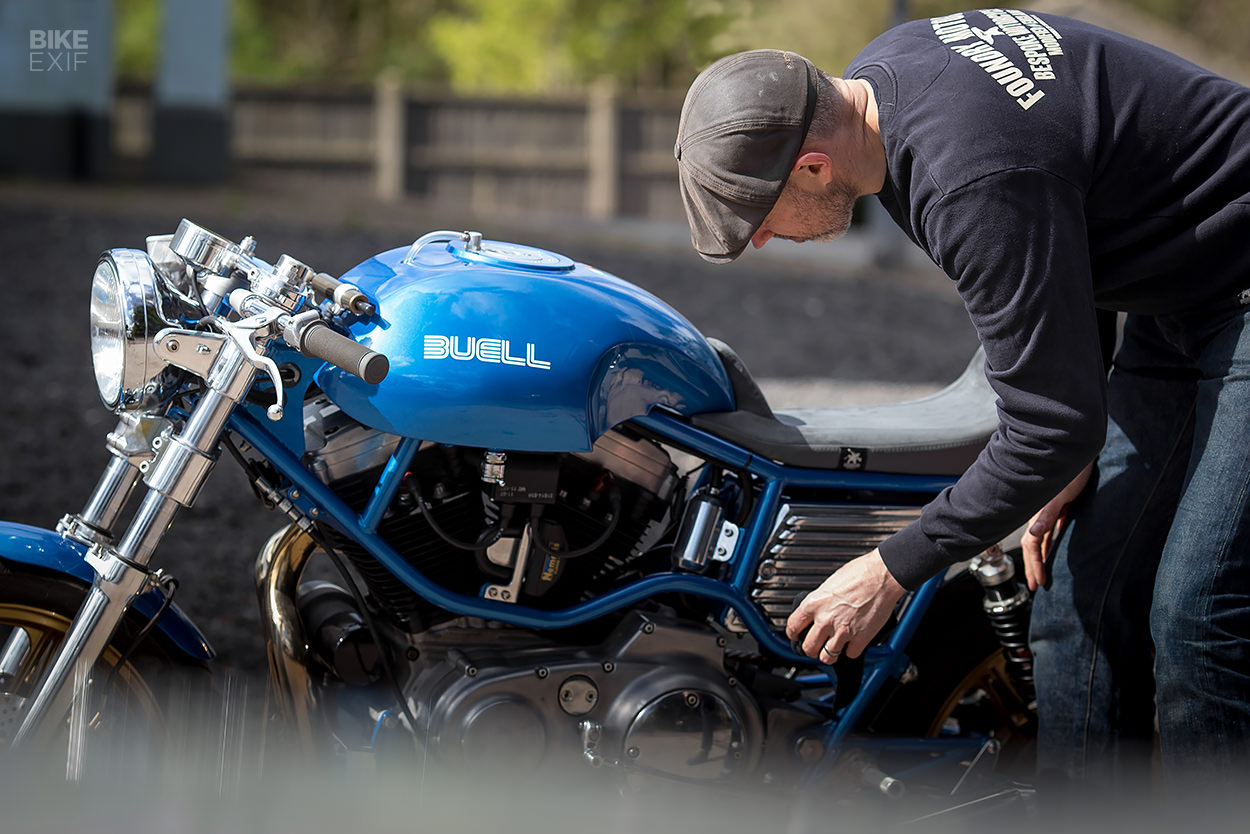 Given how many hours (and years) it took Tom to finish this Pantah-inspired, Buell-powered beauty, he admits that he’s probably forgotten about a lot of the mods. But the important thing it’s finally off his bench—and being put through its paces by its owner. 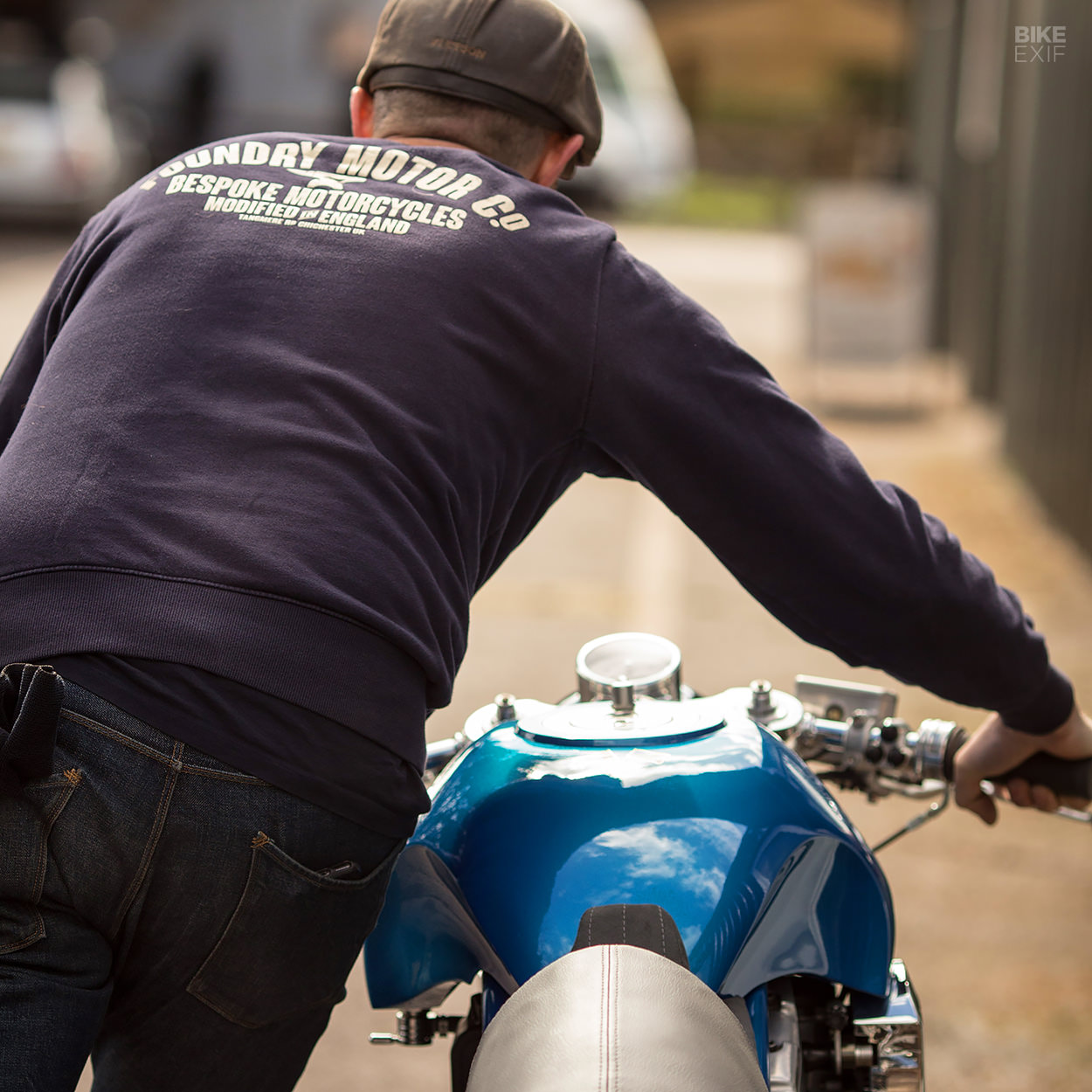