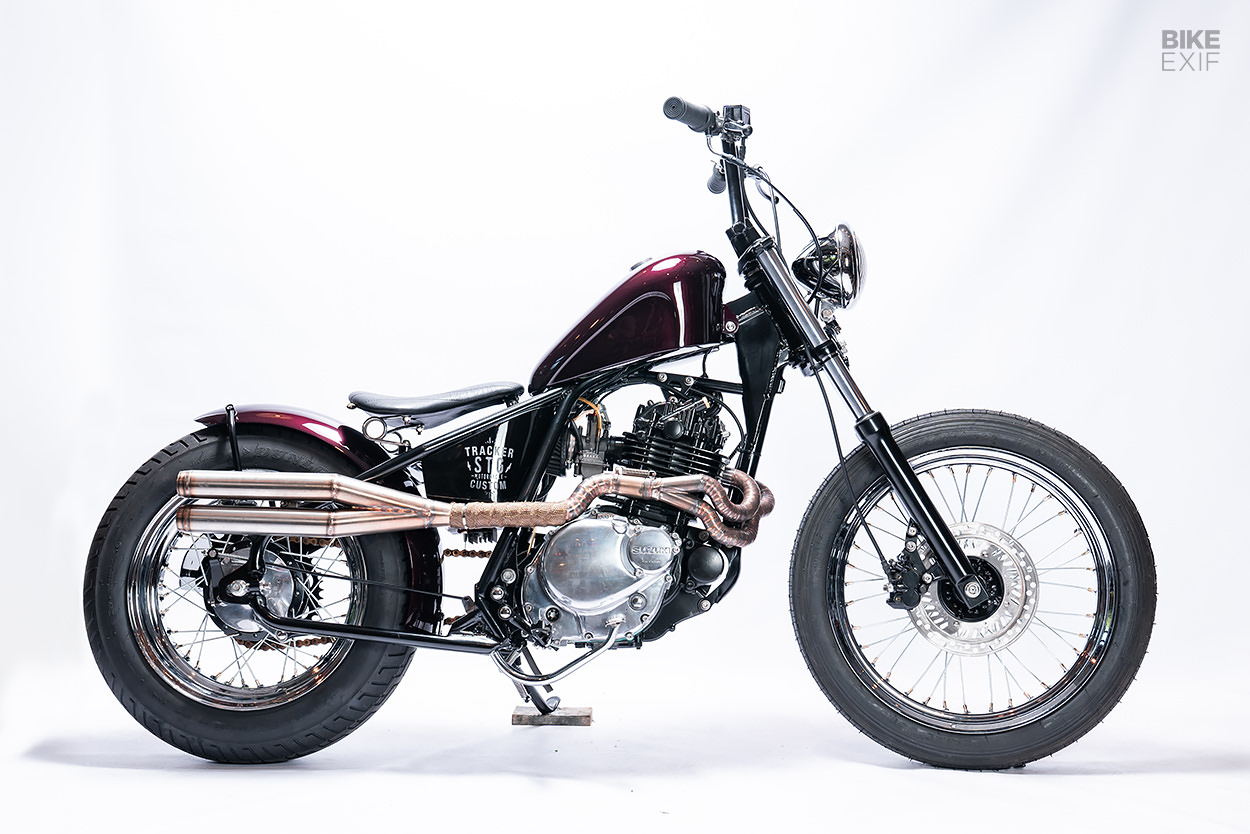 The Buenos Aires-based custom shop STG Tracker has a very specific style. The clue’s in their name—builders Marcelo Obarrio and Germán Karp have a thing for street trackers and scramblers. But they also like to shake things up from time to time.

This cheeky Suzuki GN250 bobber isn’t STG’s usual fare, but that didn’t stop them from having fun with it. The client that commissioned it only had a few requests, leaving the guys a lot of wiggle room. So they looked to the East, drawing inspiration from the Japanese chopper and bobber scene. 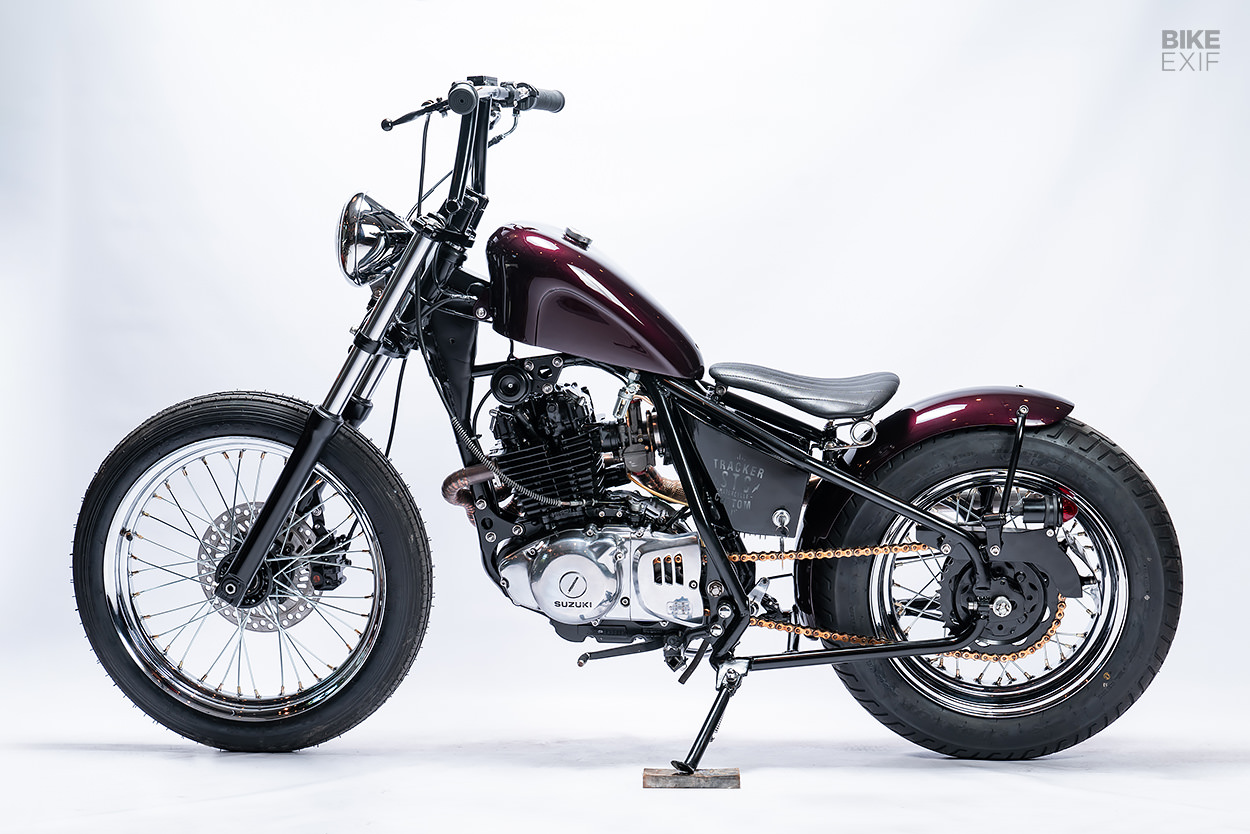 Ironically, the 1994-model Suzuki had already been customized as a street tracker when it rolled into STG’s shop. But since its owner wanted a change, Marcelo and Germán quickly stripped it down to its bones, effectively starting from scratch.

STG had built a similar looking GN125 bobber in the past, but that one still had its rear suspension. And Germán had built a few hardtail frames in the days before he and Marcelo formed STG. So on this project, they decided to take the best bits of their smaller GN build, but go all-in with a hardtail design. 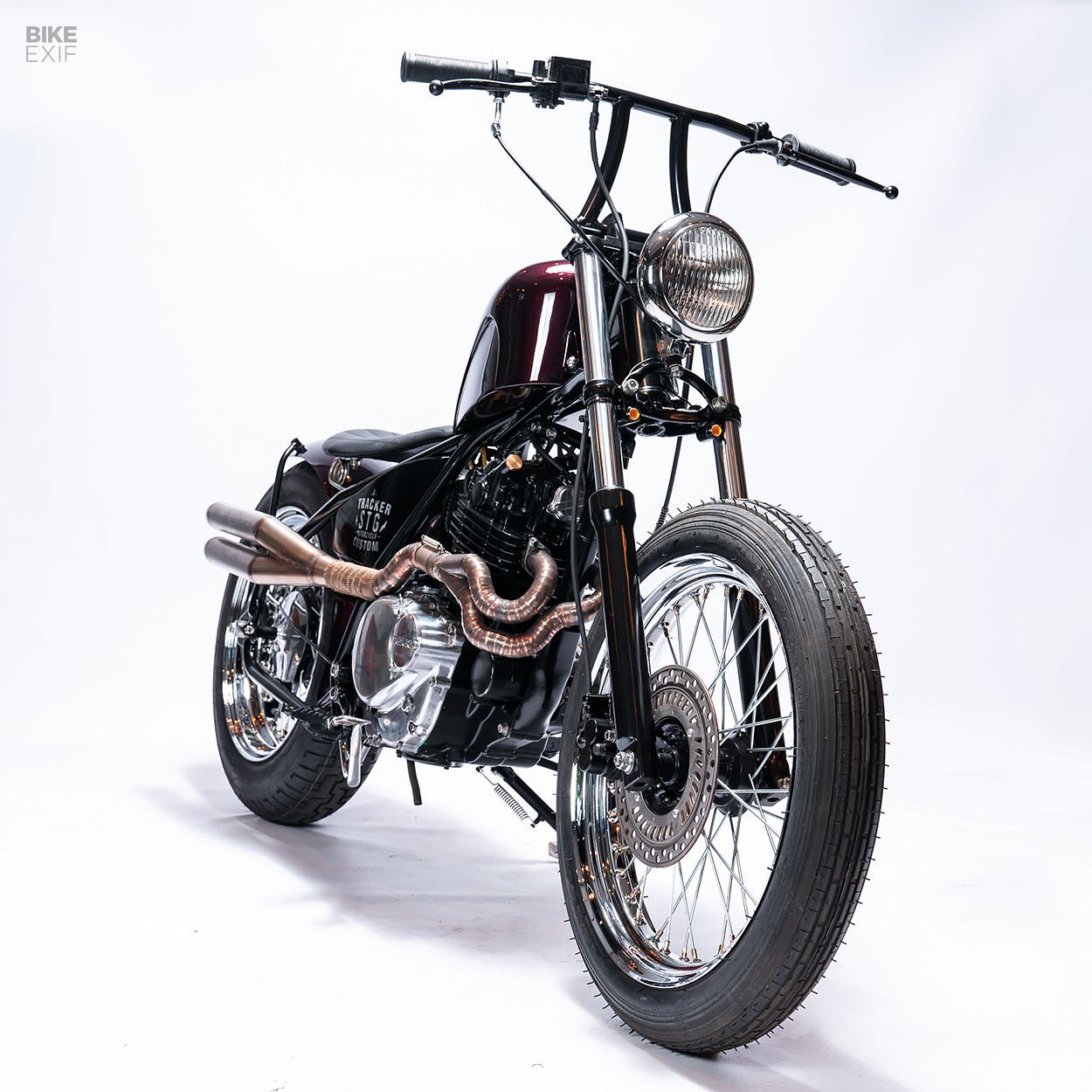 The Suzuki’s frame was cut and rebuilt, with a rigid rear end that uses classic Harley-style chain tensioners. That left the front end sitting even higher than it does now—so STG hunted for shorter forks, with a bigger diameter than the spindly GN units. A Honda CBX250 setup did the trick.

Next, STG laced up a set of 19F/16R wheels to get the stance just right. The front wheel uses an old hub that was lying around the shop, with a vintage-style Imperial tire. The rear uses the OEM hub, and is wrapped in Dunlop D404 rubber.

The new forks and front hub didn’t play nice with the Suzuki’s disc brake, so some machine work was needed to match everything up. The other end still uses a drum brake, but it’s been refurbished with new shoes.

There’s some clever fabrication out back too, where Marcelo and Germán built a chain guard that doubles as a taillight and license plate mount. 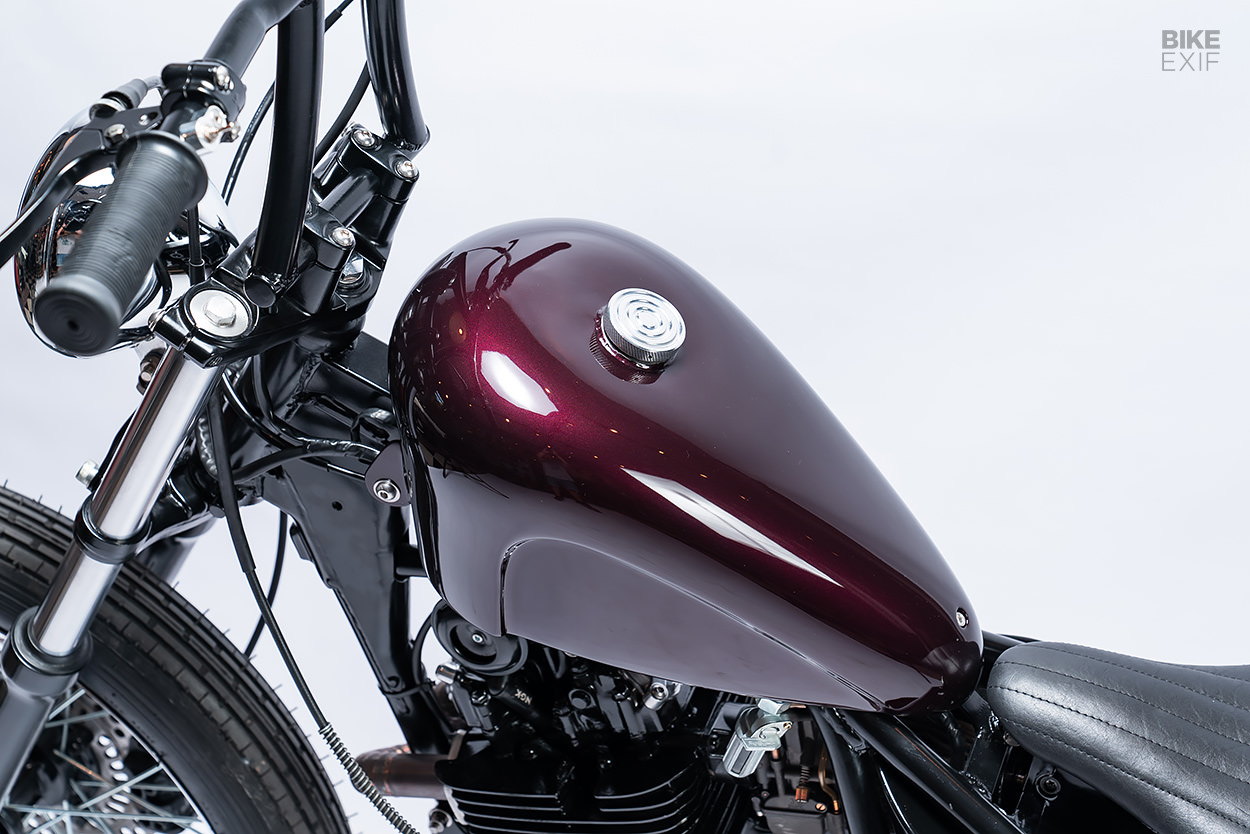 None of the GN250’s original bodywork made the cut. Up top is a hand-made steel fuel tank, sporting a classic scalloped design and a seamless lower edge. It’s topped off with a knurled aluminum gas cap.

The only other bit of bodywork is the relatively generous rear fender. It’s mounted on a pair of custom-made struts, which are flanked lower down by a set of LED turn signals. 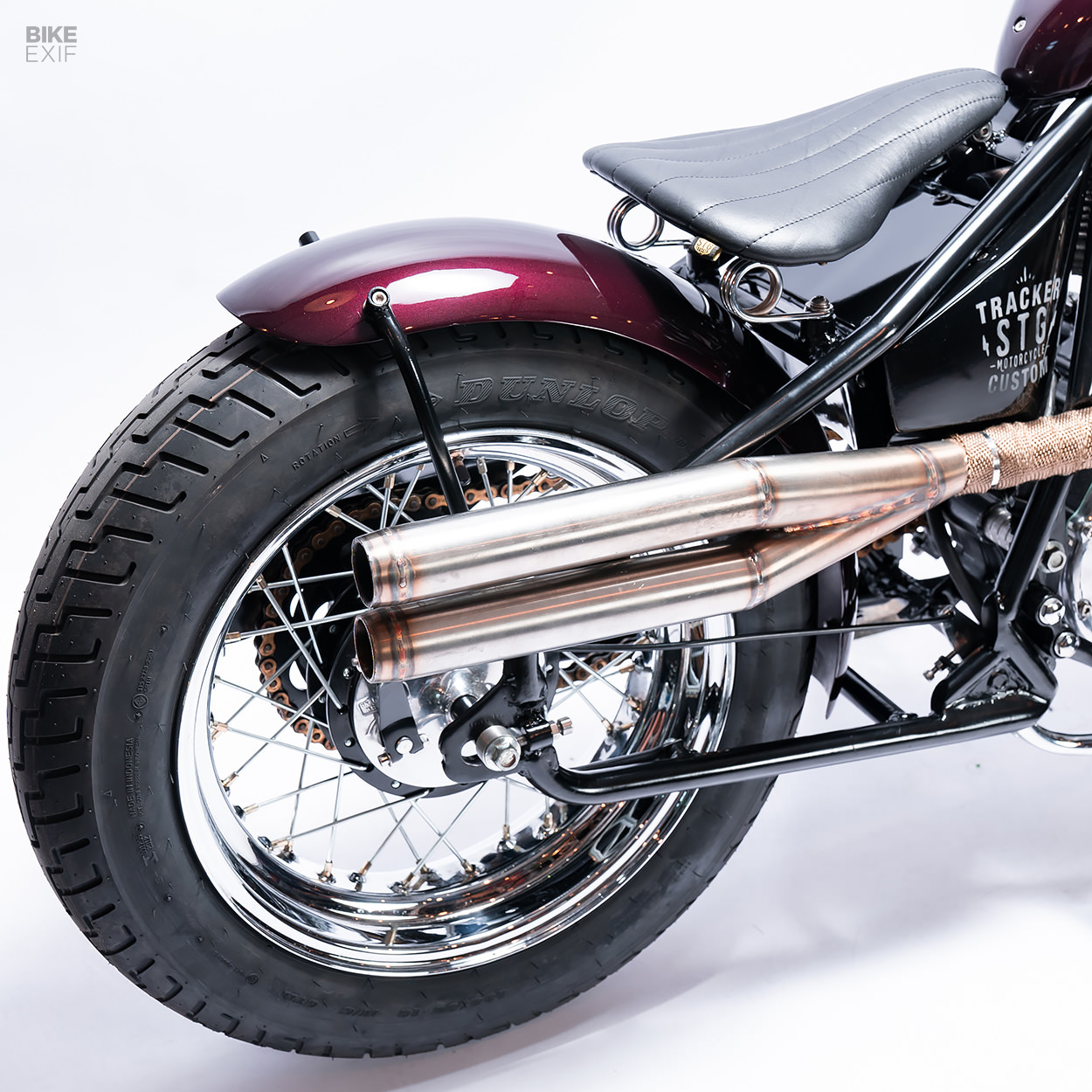 Up top is a slim spring-mounted saddle, made in-house and covered in leather. STG fabricated a faux oil tank just below it to hold the electrical bits, including the ignition.

The motor’s still stock, but it’s been treated to a proper clean up and sports a classy mix of black and polished finishes. There’s a new carb too, added for reliability’s sake. A pie-cut stainless steel exhaust system runs along the side, with just enough pipe wrap to mitigate the potential for burns. 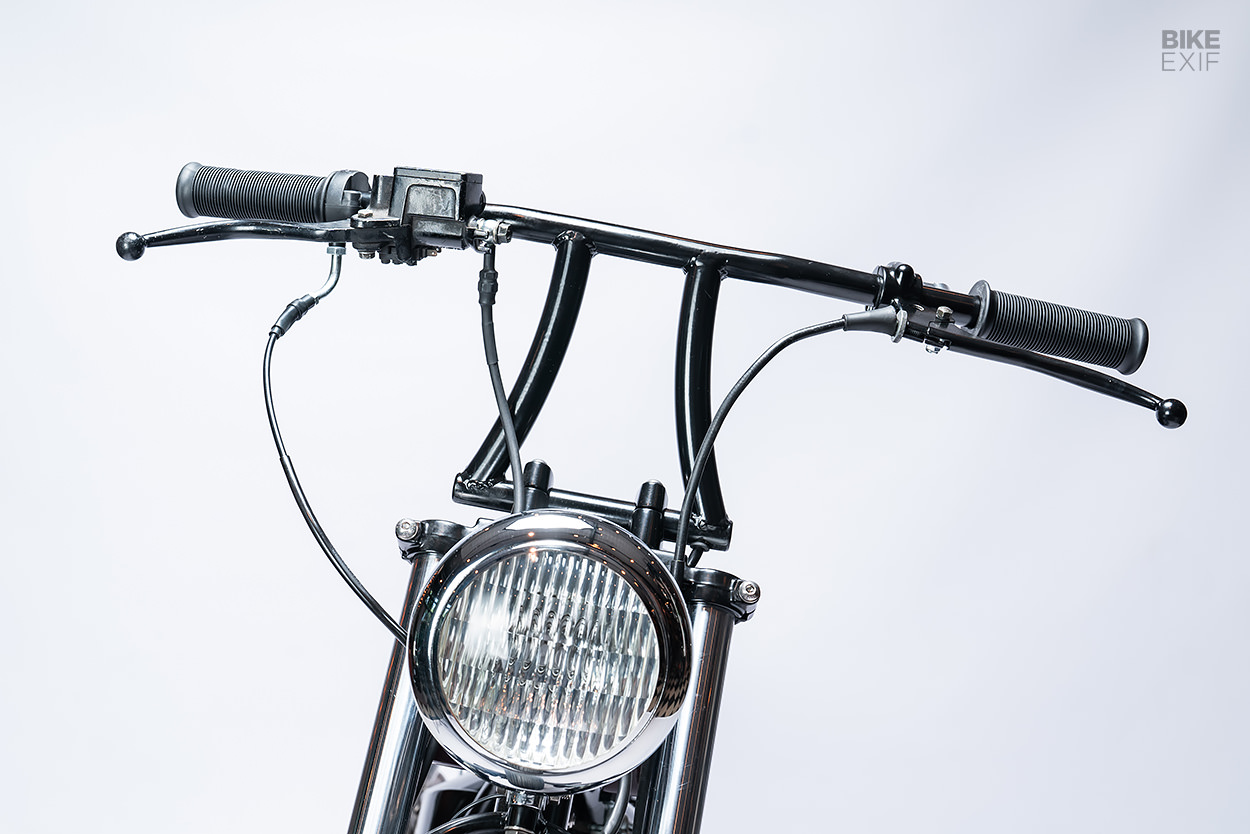 There’s more custom work up in the cockpit, starting with a set of one-off handlebars. It wears Biltwell Inc. grips, and micro-switches with internal wiring. There’s no speedo either—just a small chrome headlight out front, mounted to a custom-made bracket.

Despite its fun-loving nature, this stumpy bobber features a high grade of finishes. The deep burgundy paint has just the right amount of sparkle, and is complemented by black powder coating on most of the hard parts, with a handful of shiny bits for contrast. 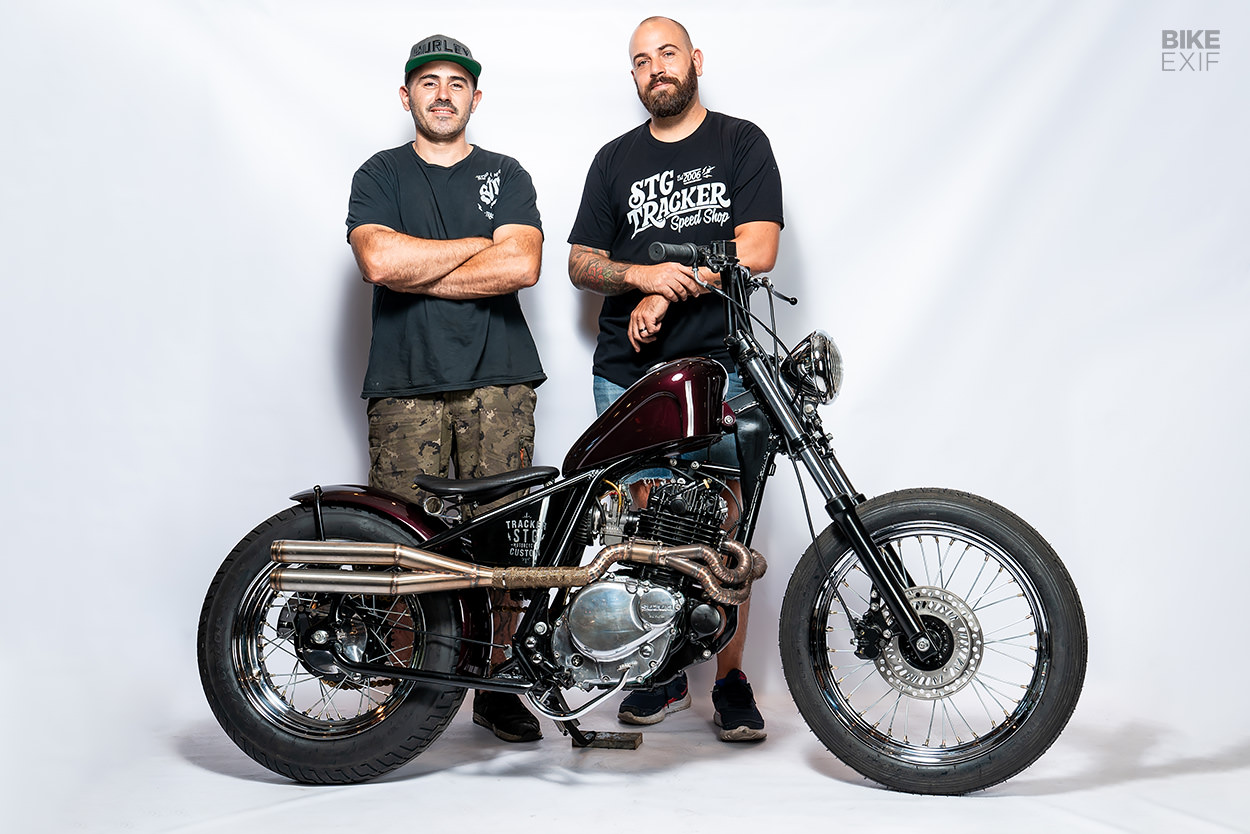 Thoughtfully designed and tastefully executed, STG’s take on Suzuki’s beloved commuter is as sassy as it is stylish. Not bad for a shop that supposedly doesn’t specialize in bobbers. 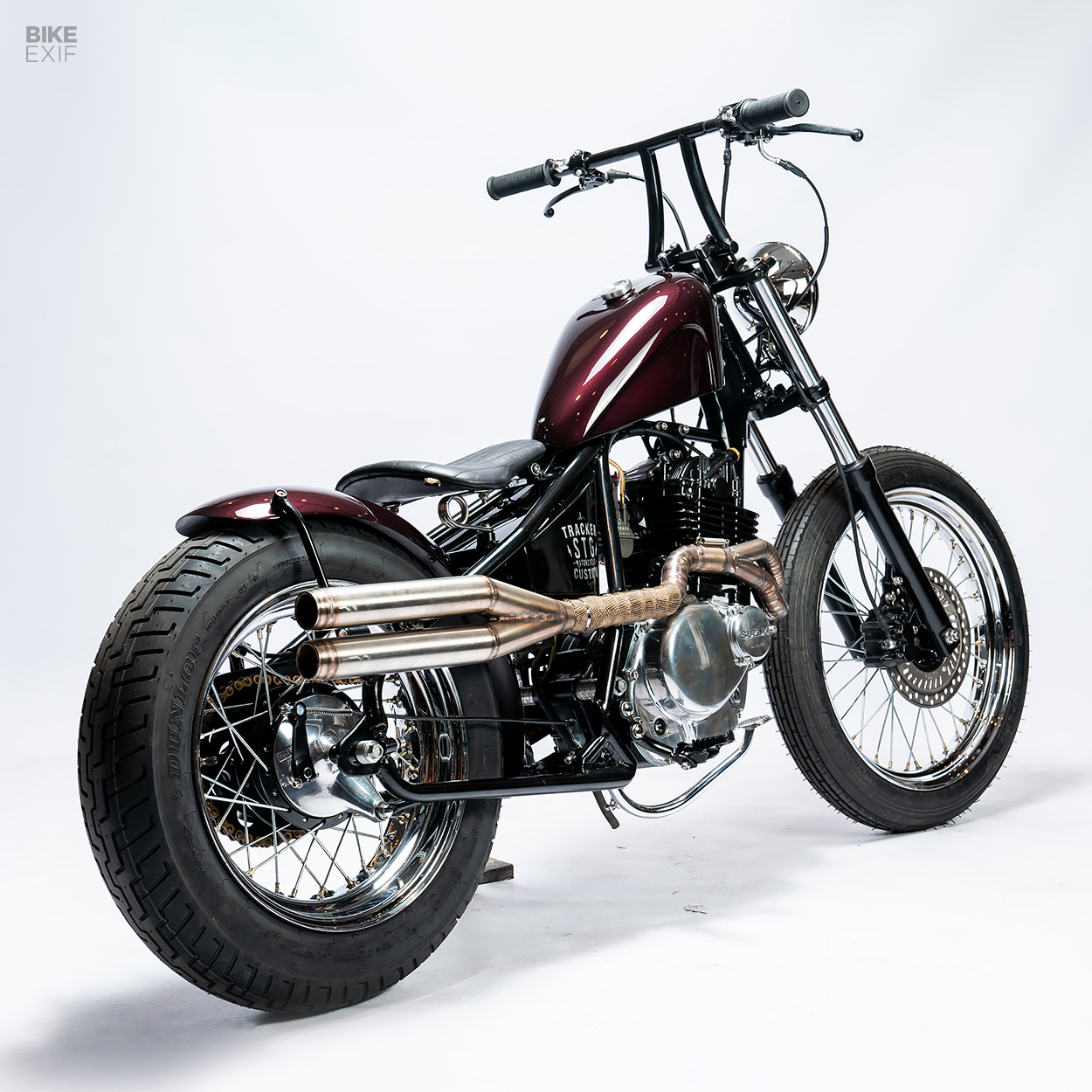