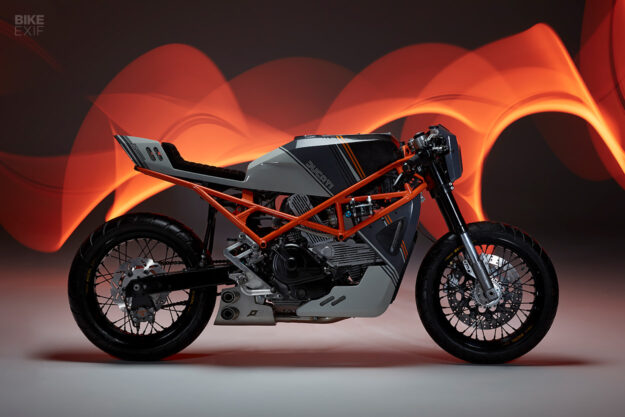 A few years ago, a café racer was usually a classic bike, modified with sleeker bodywork, a tuned engine, and a stubby solo seat. If you had a mental picture, it was most likely a 1970s Honda CB or a 1980s BMW airhead.

But as the mainstream factories dress up their bikes with fairings and clip-ons, many builders are moving on and ditching the classic vibe. They’re turning towards more modern machines—and blurring the lines of what a cafe racer should be. 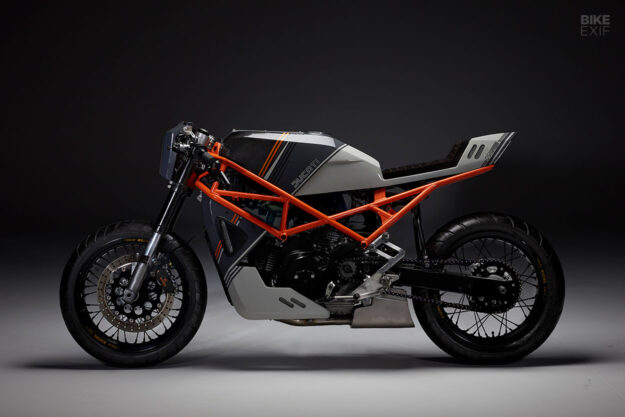 This slick Ducati Monster 600 from England typifies the change. The café racer ethos is still there, but the retro aspect is dialed down.

Called ‘Ghost,’ this machine comes from Manchester-based builder Antony Ruggiero, a man who’s comfortable with a grinder in one hand and an iPad in the other. A designer by trade, he runs For The Bold—a workshop with a high profile YouTube channel that showcases his build process. 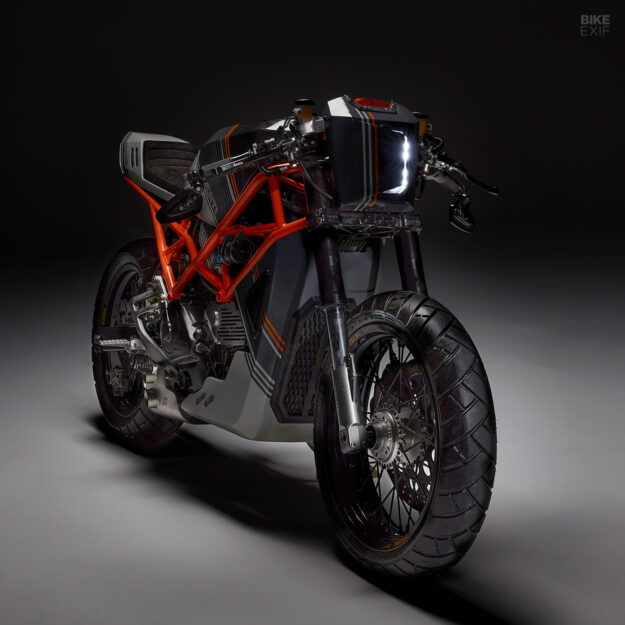 Antony’s decision to work on a Ducati Monster came from a desire to challenge himself.

“My YouTube channel was doing well, and I’d just completed a build for the Prostate Cancer Foundation,” he says. “But my last four projects were what I’d call ‘simple’ builds. A bit of frame mod, a tank and seat change, and clip-ons. I wanted to push myself further than I’d done before.” 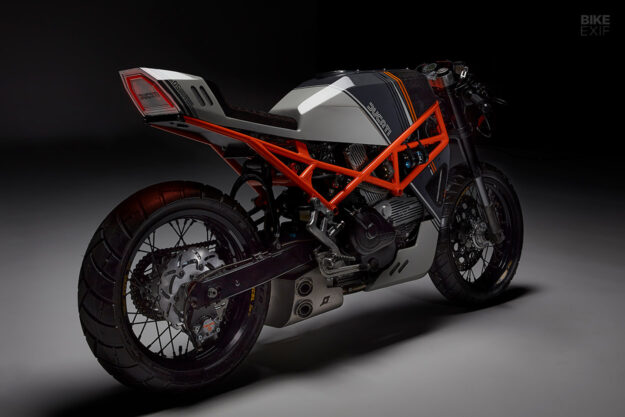 Like us, Antony is also fascinated by the changing definition of what a cafe racer should be. He decided to modify his own 1994 Monster 600, turning it into ‘a retro yet modern version’ of a cafe.

He also wanted to test the boundaries of classic styling elements—and techniques such as clay modeling—by bringing on board modern ideas and materials. 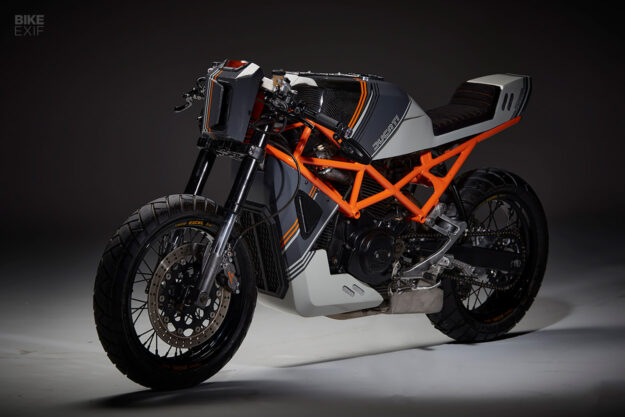 That meant an injection of carbon fiber, a gravitation towards angular lines, and a neutral color palette. And a spotlight shone on the iconic trellis frame.

“I started crafting the shapes out of foam, following a 2D sketch on my iPad, before molding the rest out of clay,” Antony tells us. “I was always in awe of the method used by traditional car designers. And I find I can bring ideas to life better when I can craft them with my hands.” 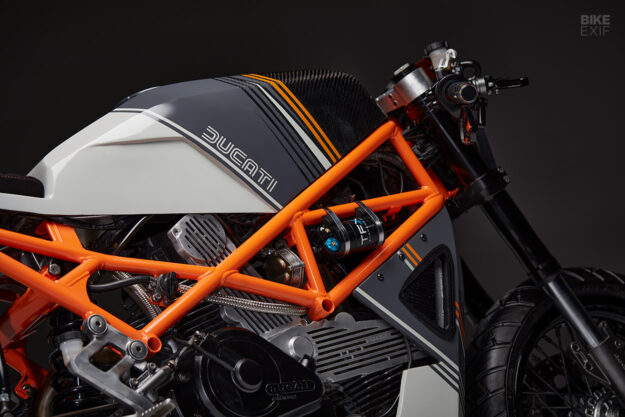 Antony used a split-mold to make fiberglass prototypes of the angular bodywork. Once everything looked right, final casts were made using ultra-lightweight carbon fiber. “Achieving symmetry was tricky—I was determined to do it by eye.”

The wheels required a little more conventional measuring. Antony has used Yamaha XS650 hubs from Dime City Cycles, and matched them to custom drilled Excel rims. The tires are Avon Trailriders, a 90% on-, 10% off-road compound chosen for an aggressive look. 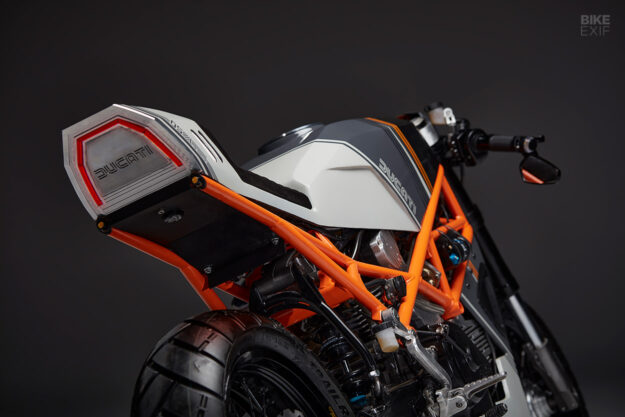 The refurbished forks are anodized in black and custom spacers align the wheels at both ends. Antony also made custom brackets to fit the rear brake, and a custom sprocket that marries the XS650 hub to the Monster’s 520 front sprocket and chain.

There’s a lot of 3D design on this machine. Printed plastic parts include the fairing vents, some brackets and the lower bodywork; 3D files were also used to CNC-cut aluminum for the tail unit, cam belt covers, a triple tree and the tank strap. 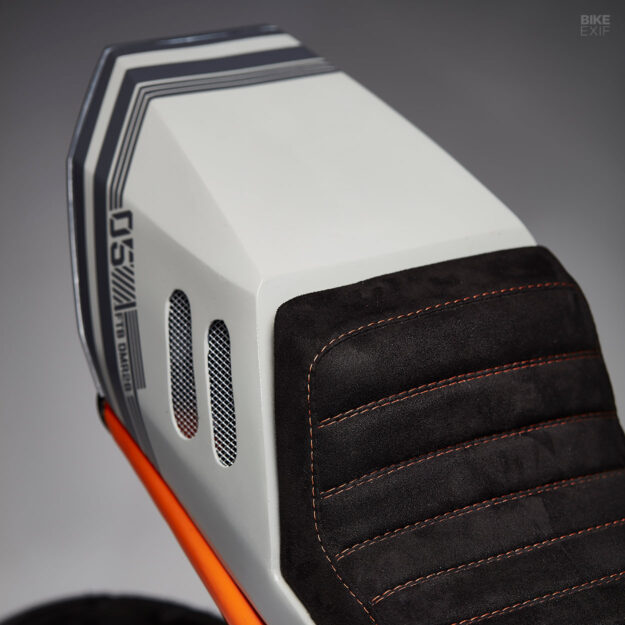 Antony has shortened the back end of the frame to tighten up the side view, but he’s extended the length of the tank by four inches—creating a sportier riding position. The new tank sits around three inches lower than the stock item and hugs the air filter closer.

Right behind is the custom seat, upholstered with black Alcantara with orange stitching to complement the vivid color on the trellis frame. Hidden underneath is a TFX mono-shock, with an external reservoir discreetly mounted onto the frame. 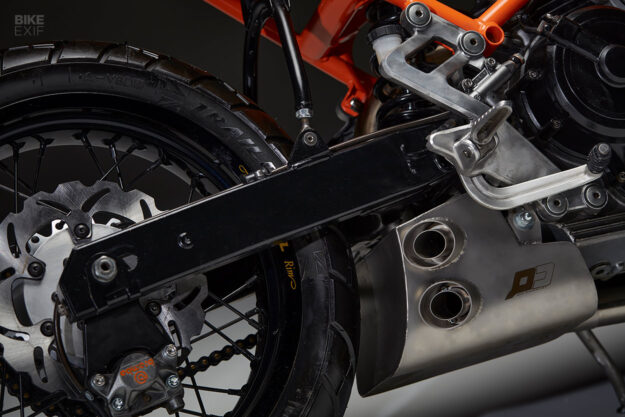 The unusual exhaust system is from the Italian maker QD. Called the Ex-Box, it conceals several tuned acoustic chambers to constrain decibels without impeding gas flow—and is set low to avoid cluttering up the overall lines.

With new controls, a Domino throttle and compact LED blinkers all round, this Monster 600 is now ready to hit the road. 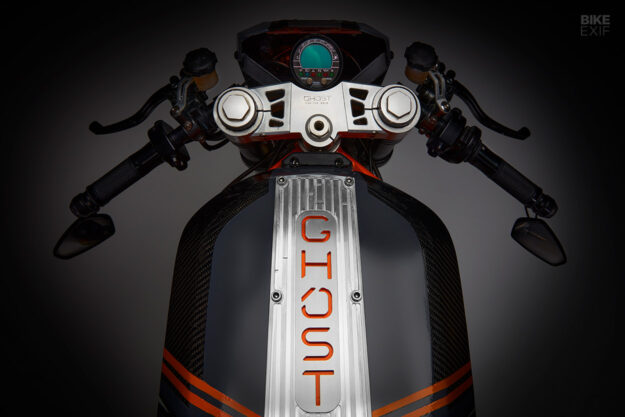 It’s hard to make angles look good on a bike, and many attempts are hit-and-miss or too ‘busy.’ But Antony has got it just right with his Monster 600, with great visual balance and a low-key paint job that lets the frame do the talking.

If this is a glimpse of the future for café racers, we’re all for it.

For the Bold Industries | Instagram | Photography by Tom Law, shot at THG Studios 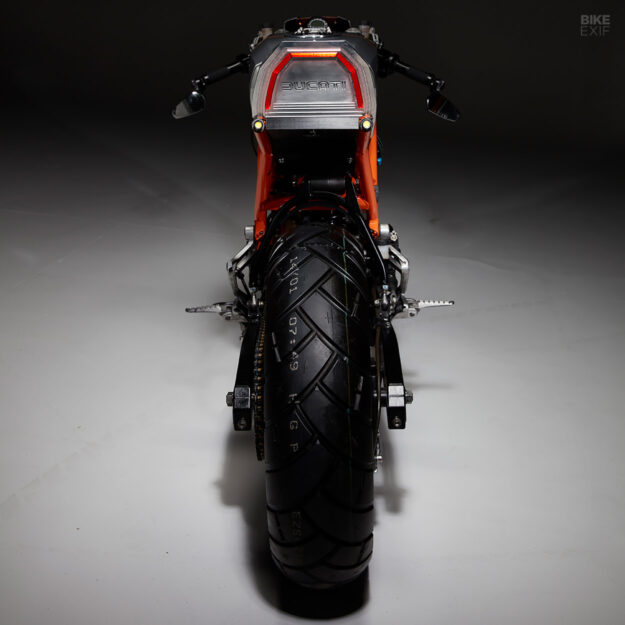