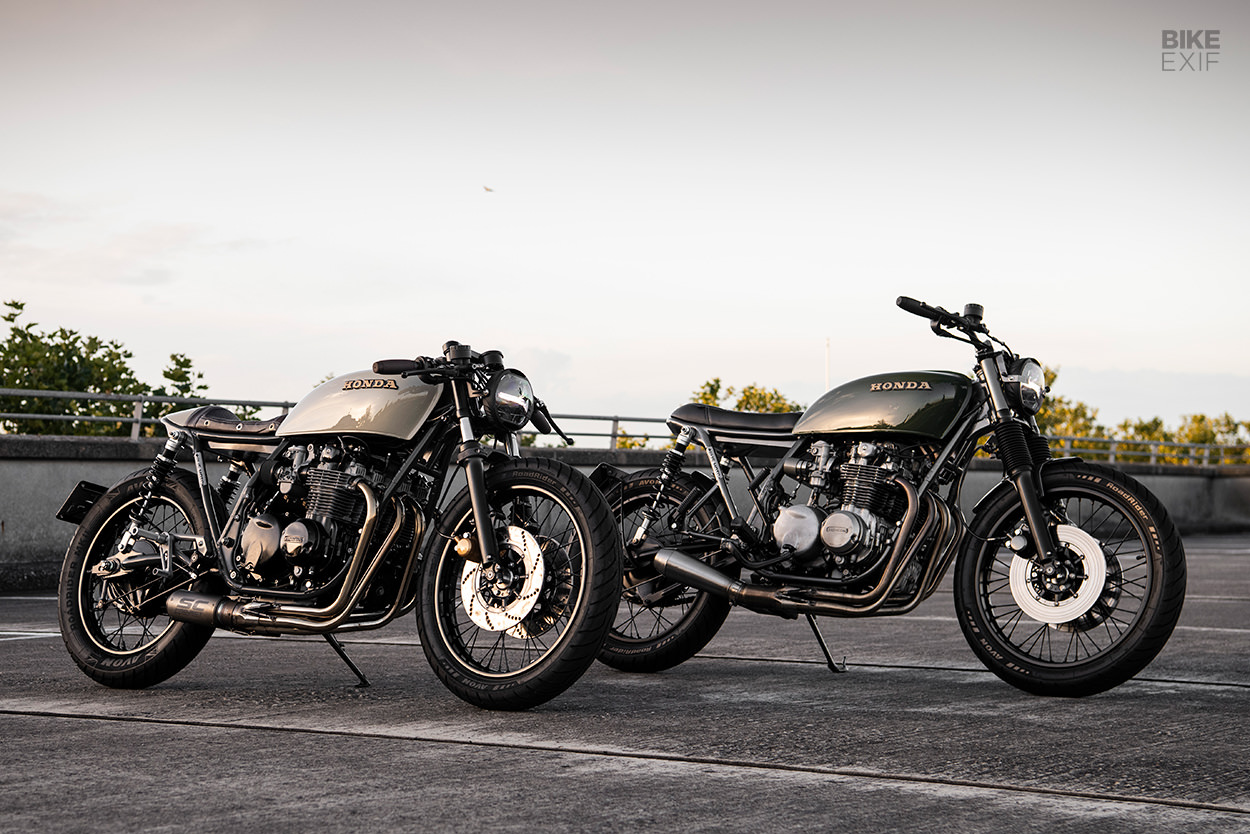 Even if you don’t know Chiel Nipius’ name, you’ve probably seen his work. He was part of the team at Ironwood Custom Motorcycles for a while, but he’s now branched out on his own as Nius Moto. And judging by these two Honda CB550 customs, he has the skills to pay the bills.

Using the knowledge he acquired under the mentorship of Ironwood shop boss, Arjan van den Boom, 23-year-old Chiel juggles custom bike building with other interests. He also has a part-time job as a metal fabricator at an interior design company, and he’s looking into studying product design. 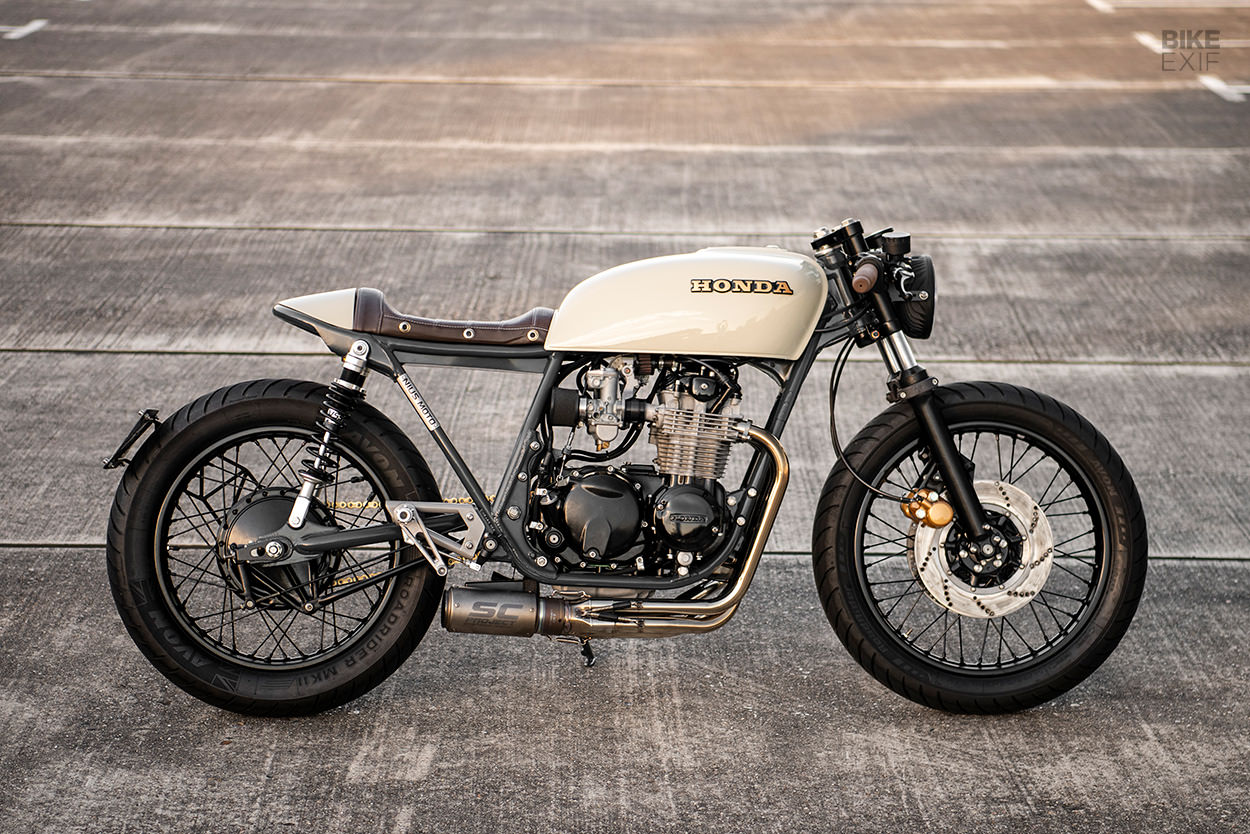 But the end goal is to make Nius Moto a full time gig. And he’s off to a good start, too.

The sand-colored café racer shown here is a 1977-model Honda CB550 commissioned by a friend, while the green street scrambler is a 1978, built as a personal project. Neither of them tread any new ground visually, but both are stellar examples of their respective styles. 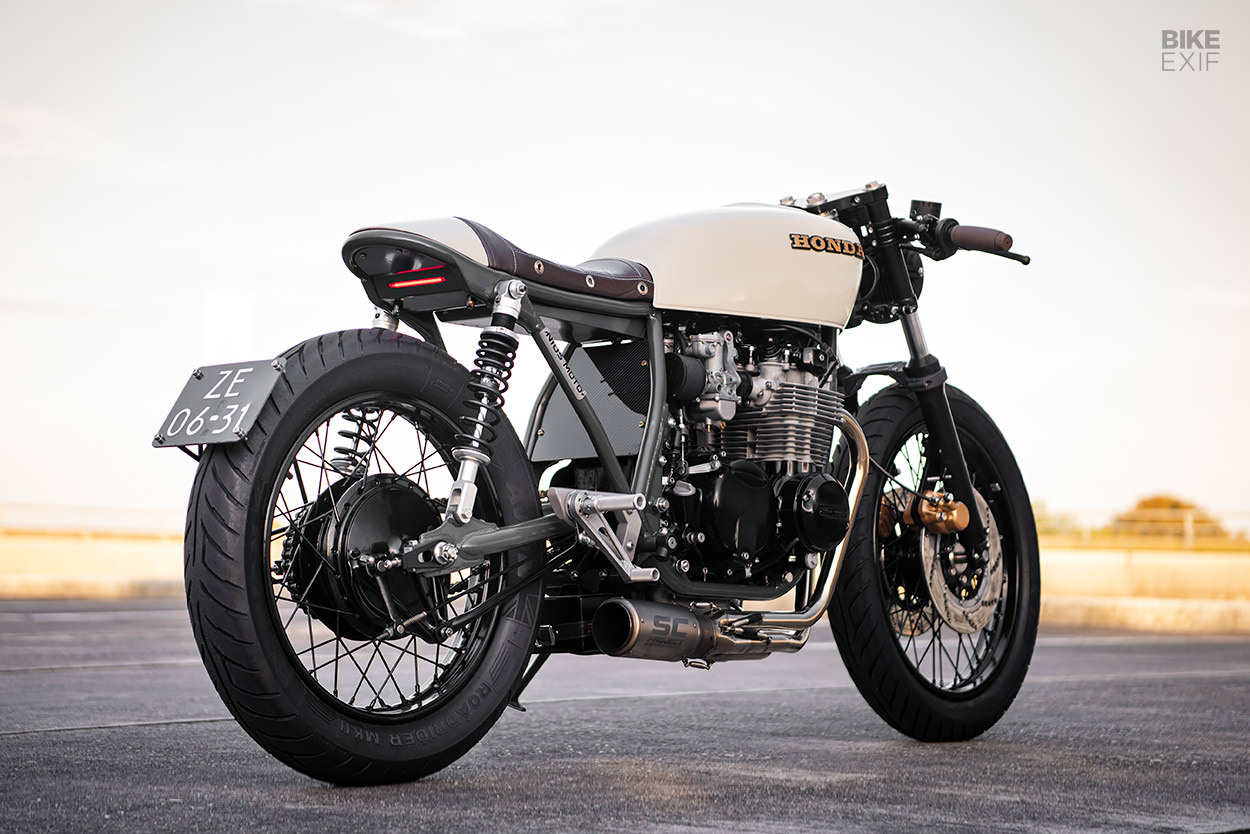 Chiel handled all the work on both Hondas himself, save for the paint and powder-coating. On the café racer, that work included a full engine rebuild, with a 605 cc big bore kit, a CB650 camshaft and valves from an RS-spec Renault.

The carbs breathe in through a set of Uni Filter pods, with a carbon fiber plate mounted behind them to keep muck out. The exhaust system consists of a set of four-into-one Delkevic headers and a titanium SC Project muffler. “This thing is quick and loud,” says Chiel. 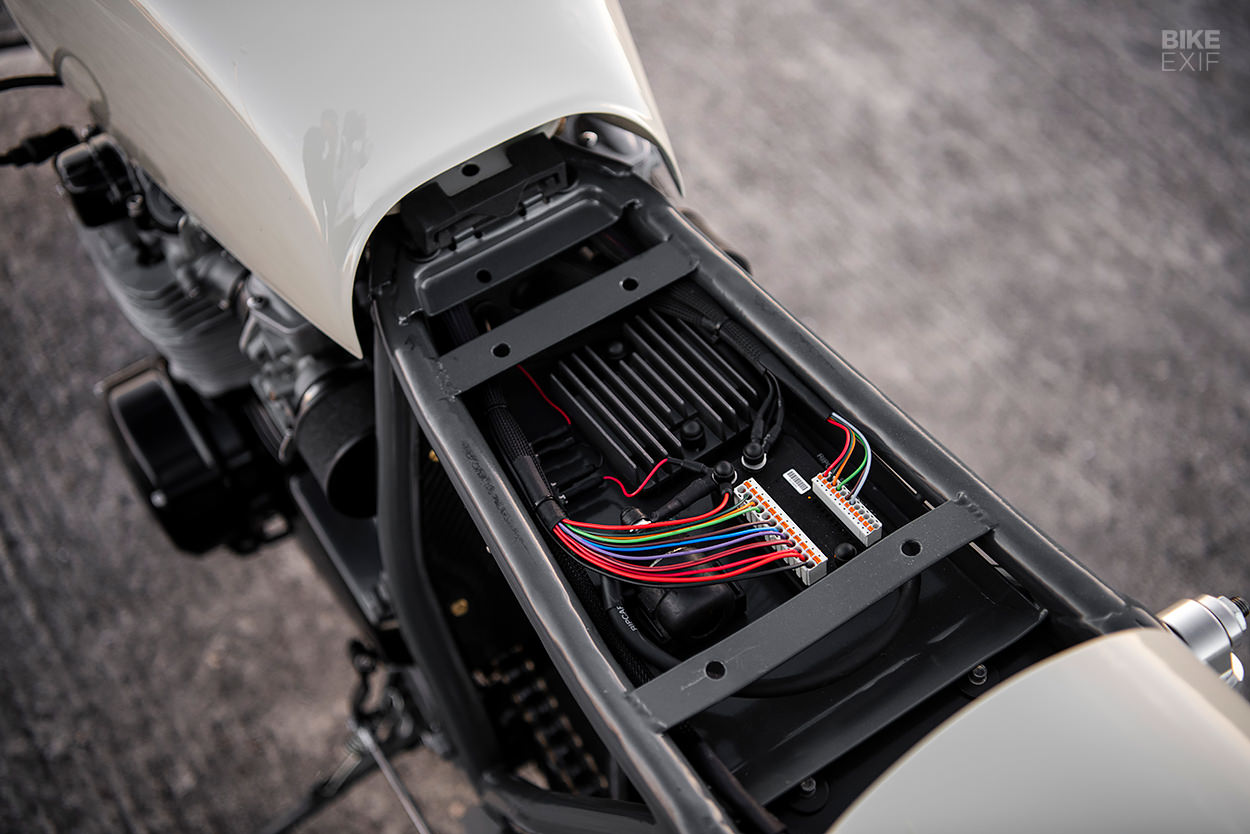 One of Chiel’s first jobs at Ironwood was electrics, so this Honda’s had a full rewire, executed with clinical precision around a Motogadget mo.unit control box. It’s all stashed in a custom-made tray under the seat, with the battery sitting in a box below the swingarm.

Chiel cut and looped the subframe up top, then tucked an LED taillight in behind the shock mounts, along with a pair of Motogadget turn signals. A hand-shaped steel cowl caps off the end. 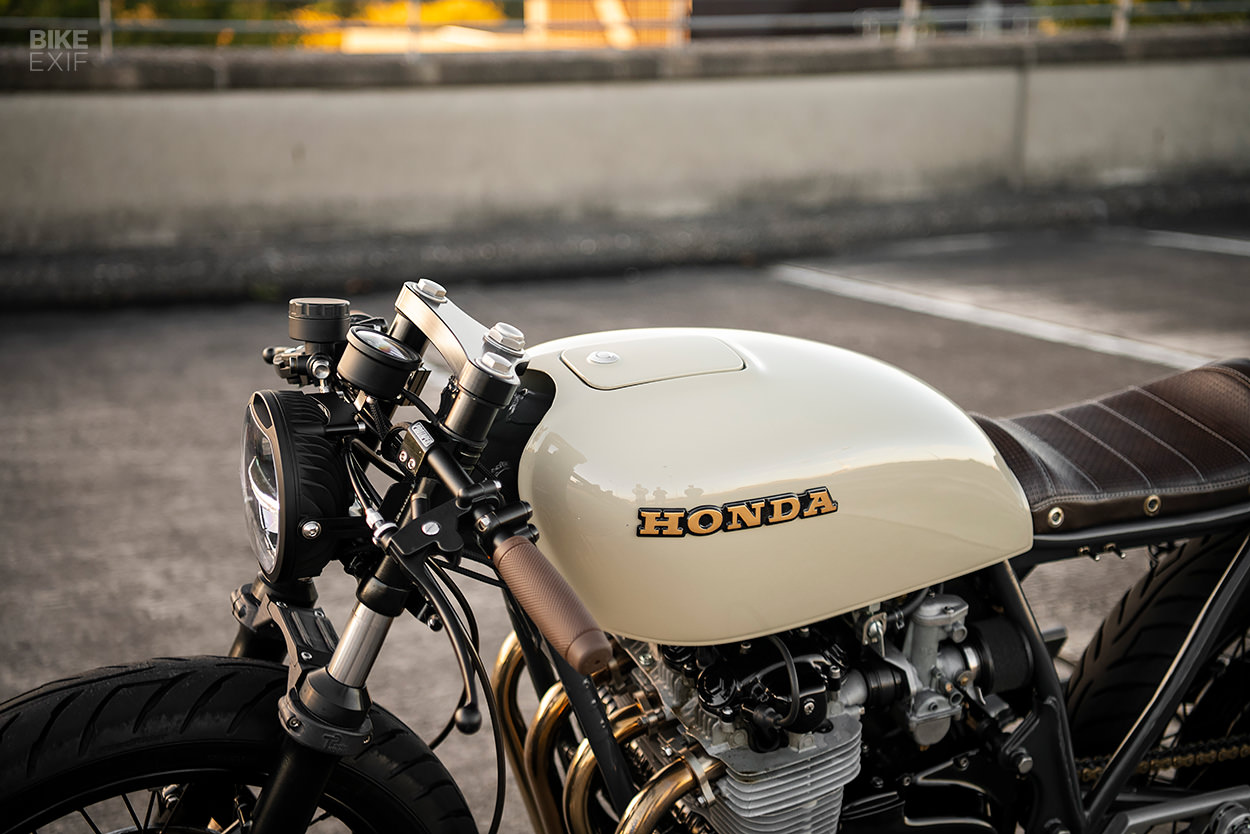 Chiel also added a clean Cognito Moto top yoke and a fork brace from Tarozzi. And he changed the front brake to a twin disc setup with new hoses, for better stopping power. 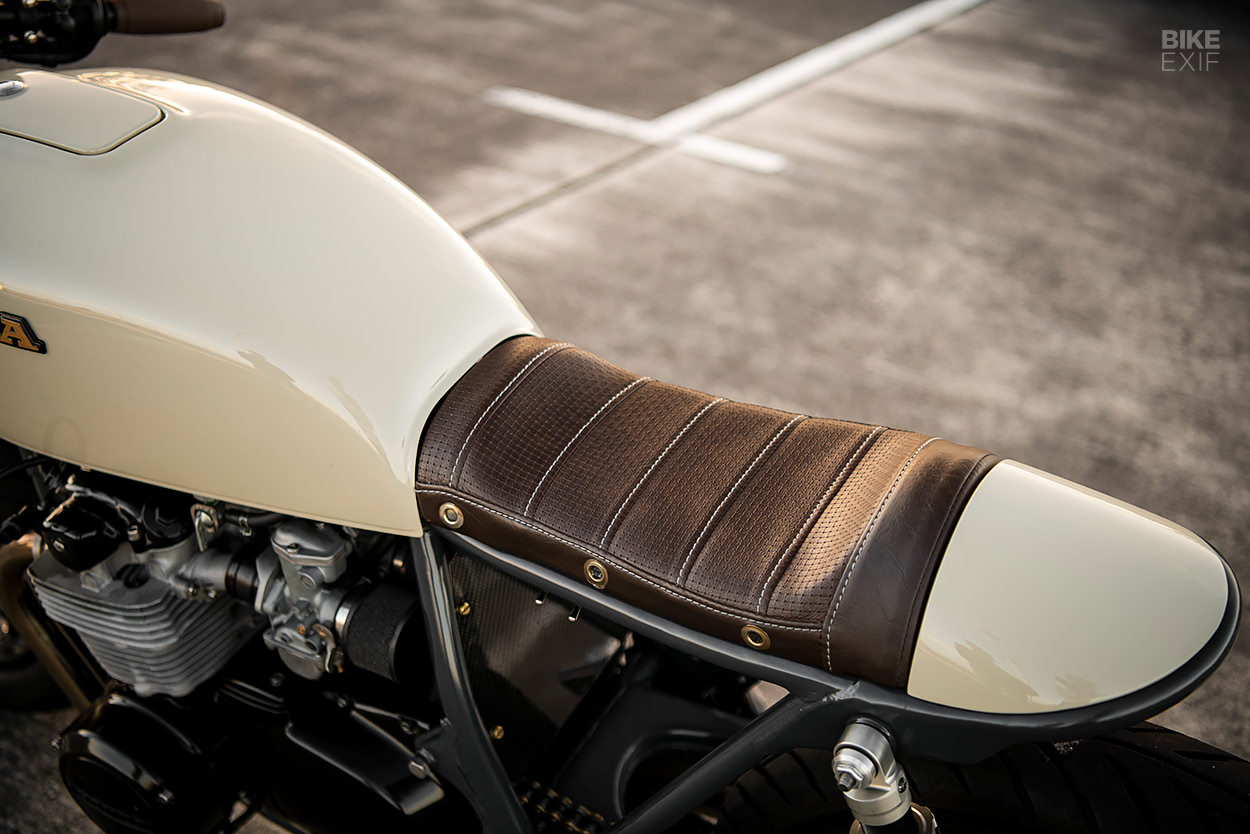 The color on the 1977 Honda’s tank and tail was lifted straight from Porsche’s catalogue, as was the stitching pattern on the brown leather seat. Chiel picked black for the wheels and motor, and the same ‘rat grey’ that Honda used on the old SS50 for the frame. It’s a totally unexpected, but extremely classy, combination. 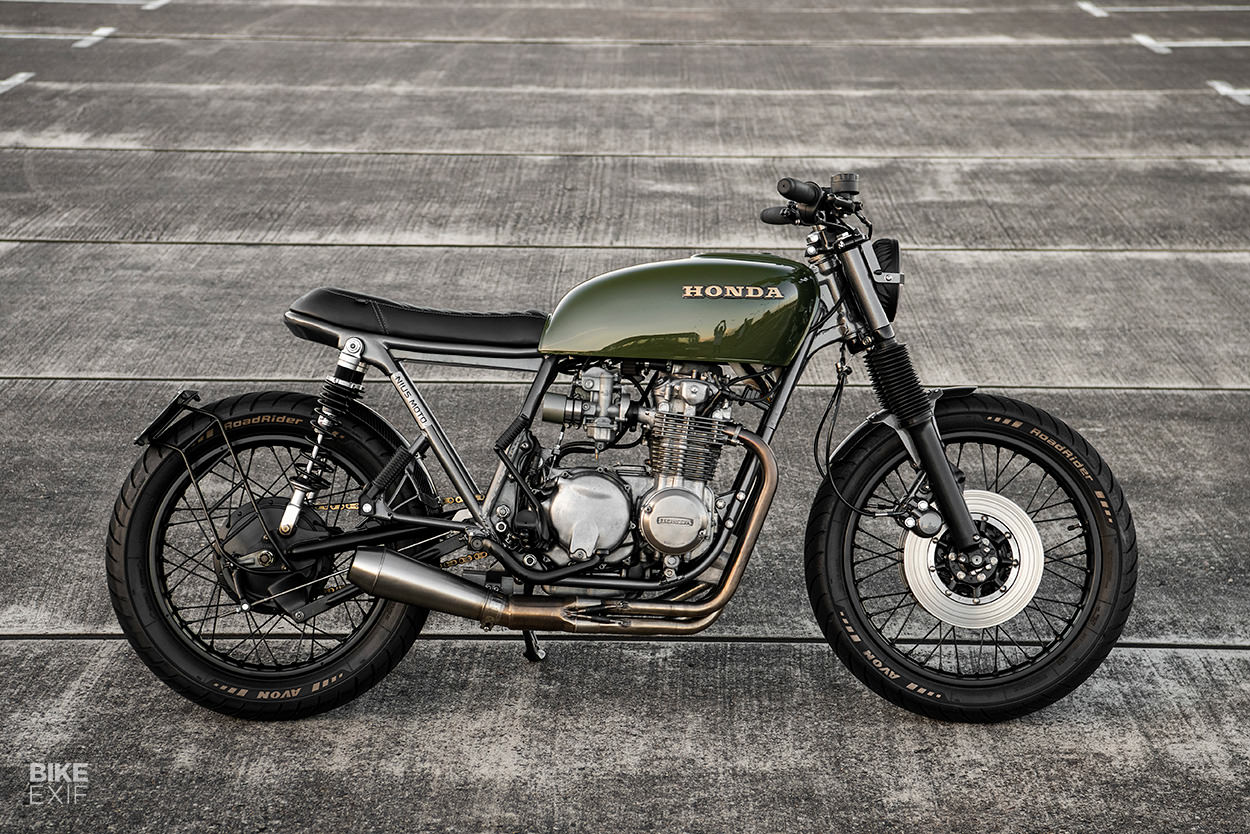 Both bikes are equipped with Avon Roadrider tires and YSS shocks, but the scrambler sits a bit higher. Like its low-slung counterpart, it’s also been rewired and treated to a dual front brake conversion.

Chiel left this one’s engine mostly stock, except for the CB650 camshaft upgrade. It also uses Delkevic exhaust headers, but with a stainless steel Cone Engineering muffler. And the carbs are hooked up to a custom air box and filter combo, handmade for this bike. 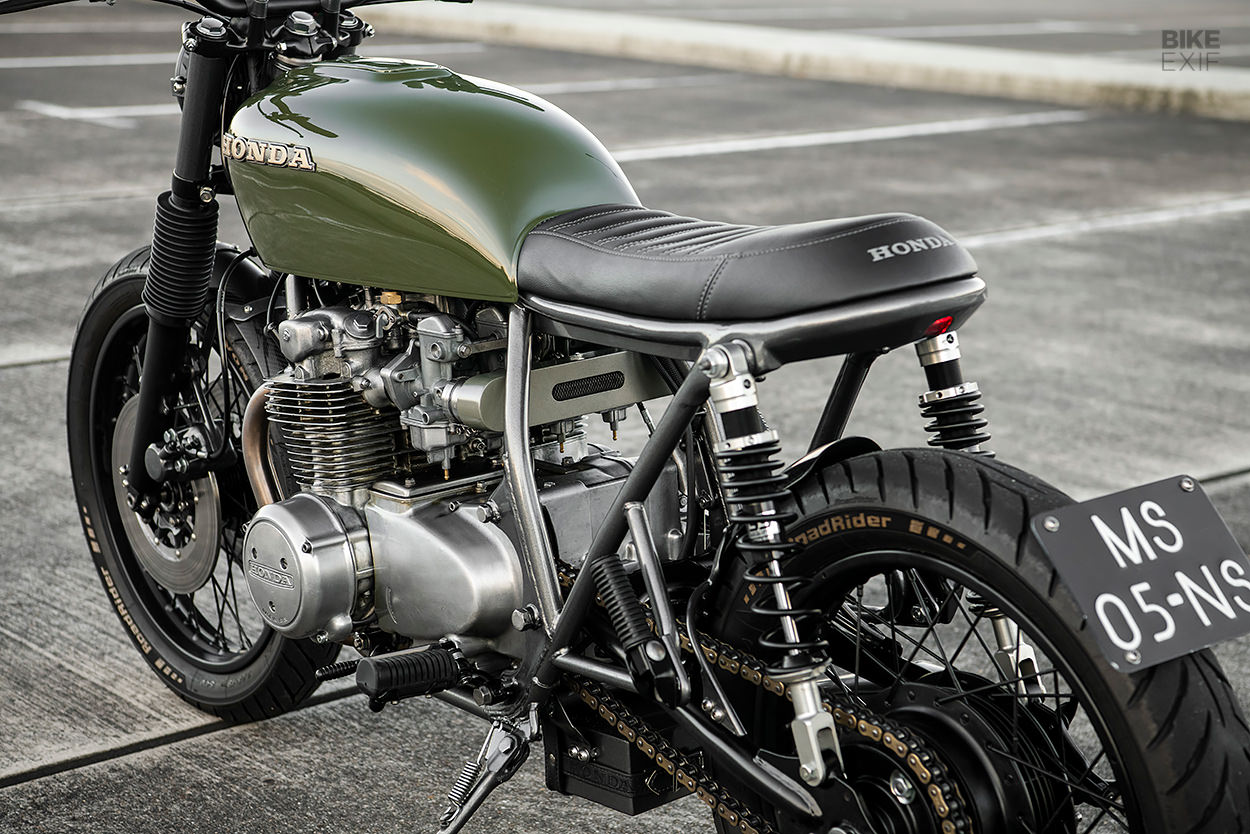 The subframe’s been modified slightly differently on the 1978 CB, with a bench seat up top that can take two in a pinch. Chiel turned to Jowi Paulissen for the upholstery, which includes a neat little Honda logo on the back. “It takes me back to my little Honda moped days,” he says.

Sitting flush against the rear loop is a custom-made taillight housing. There’s a set of LEDs inside, with a plexiglass cover to finish it off. There are also carbon fiber fenders at both ends; Chiel shaped them himself, along with their mounting brackets. 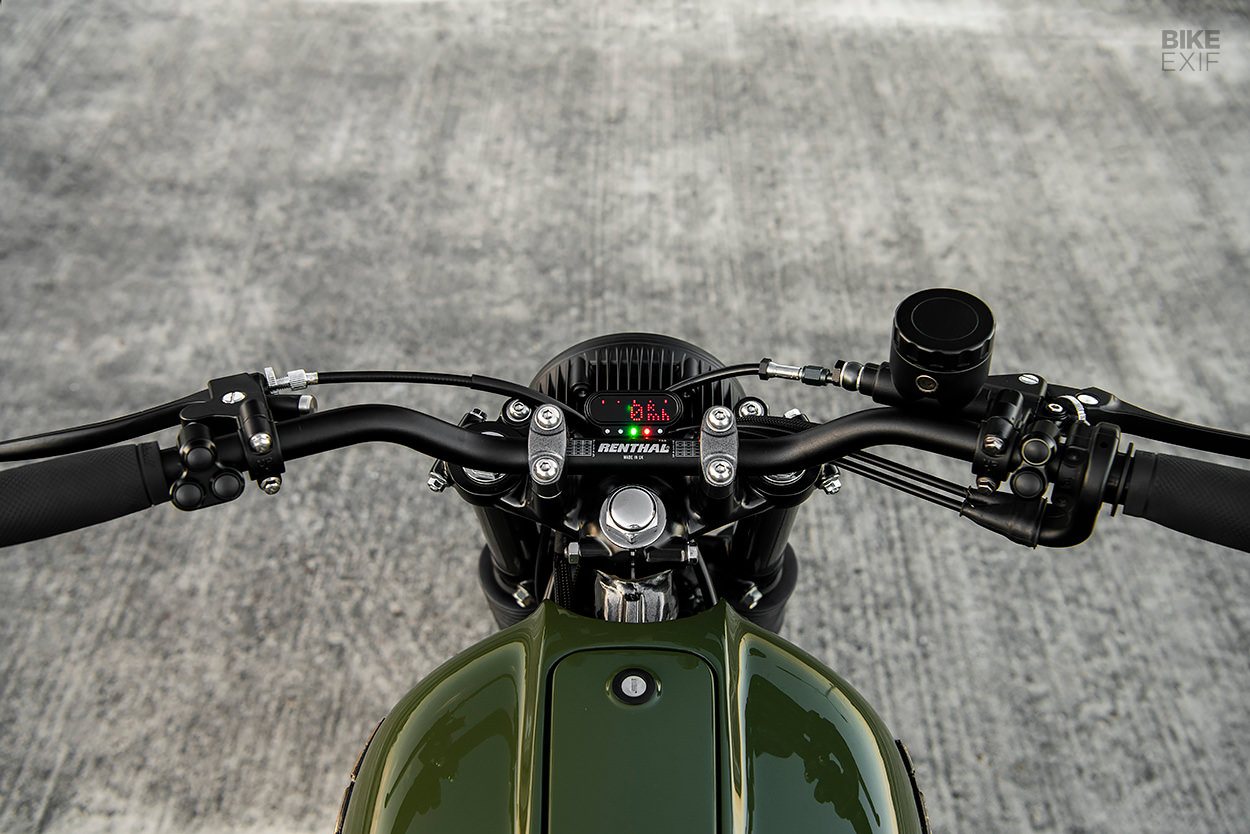 Chiel opted for the ‘Urban Green’ hue in BMW’s automobile swatch book on this one, with a metallic gunmetal grey finish on the frame, executed by King Custom Coatingz. White lettering on the tires adds an extra visual hit. 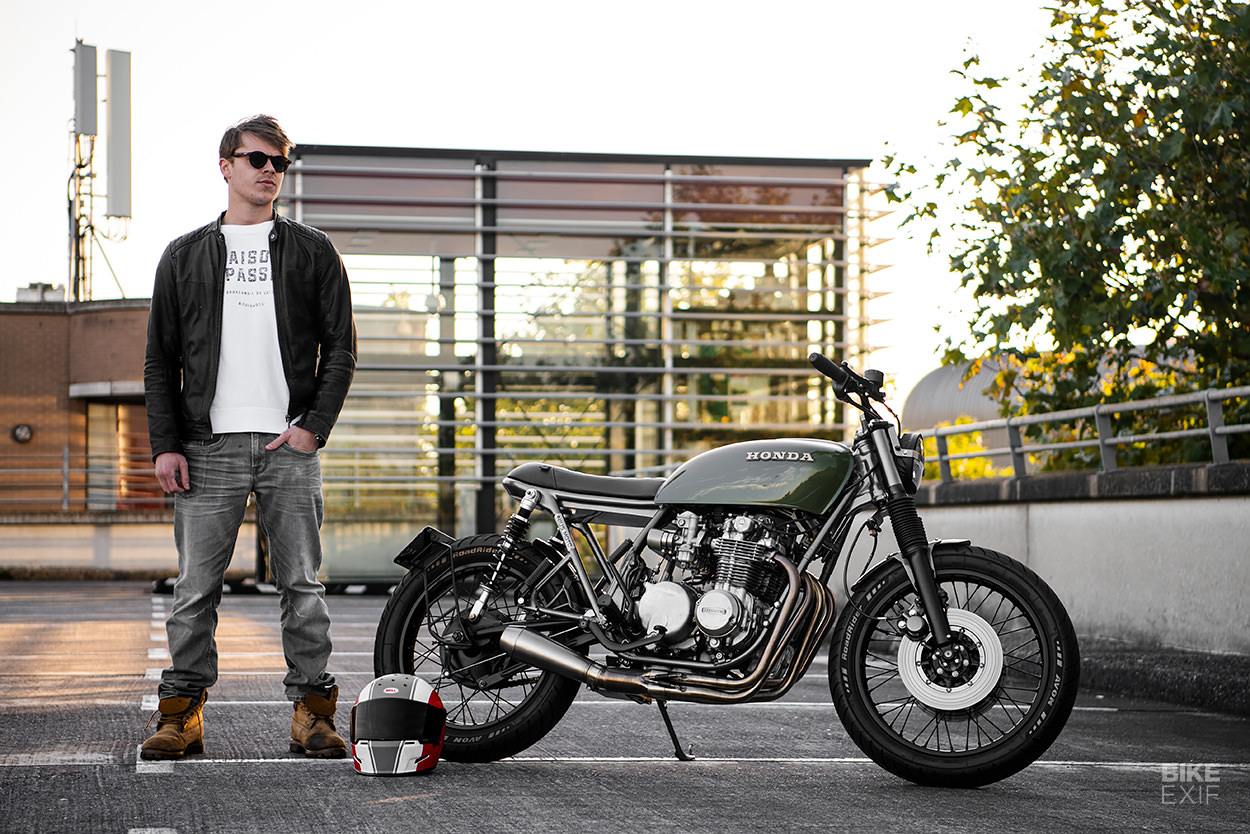 Like the bikes that roll out of Ironwood’s workshop, both of these Hondas look clean enough to eat off—so Chiel’s time there clearly paid off. We’re looking forward to seeing where he goes from here. 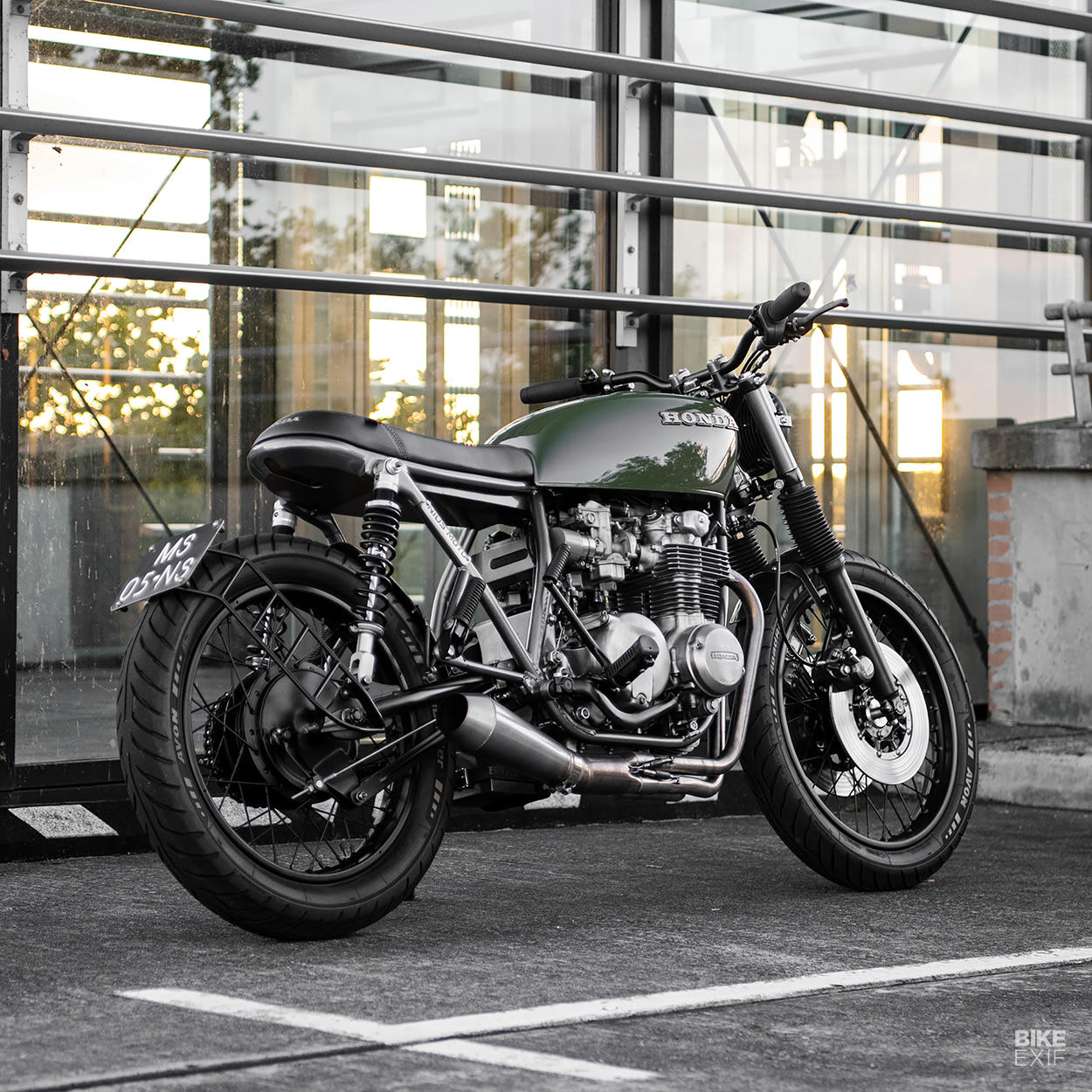