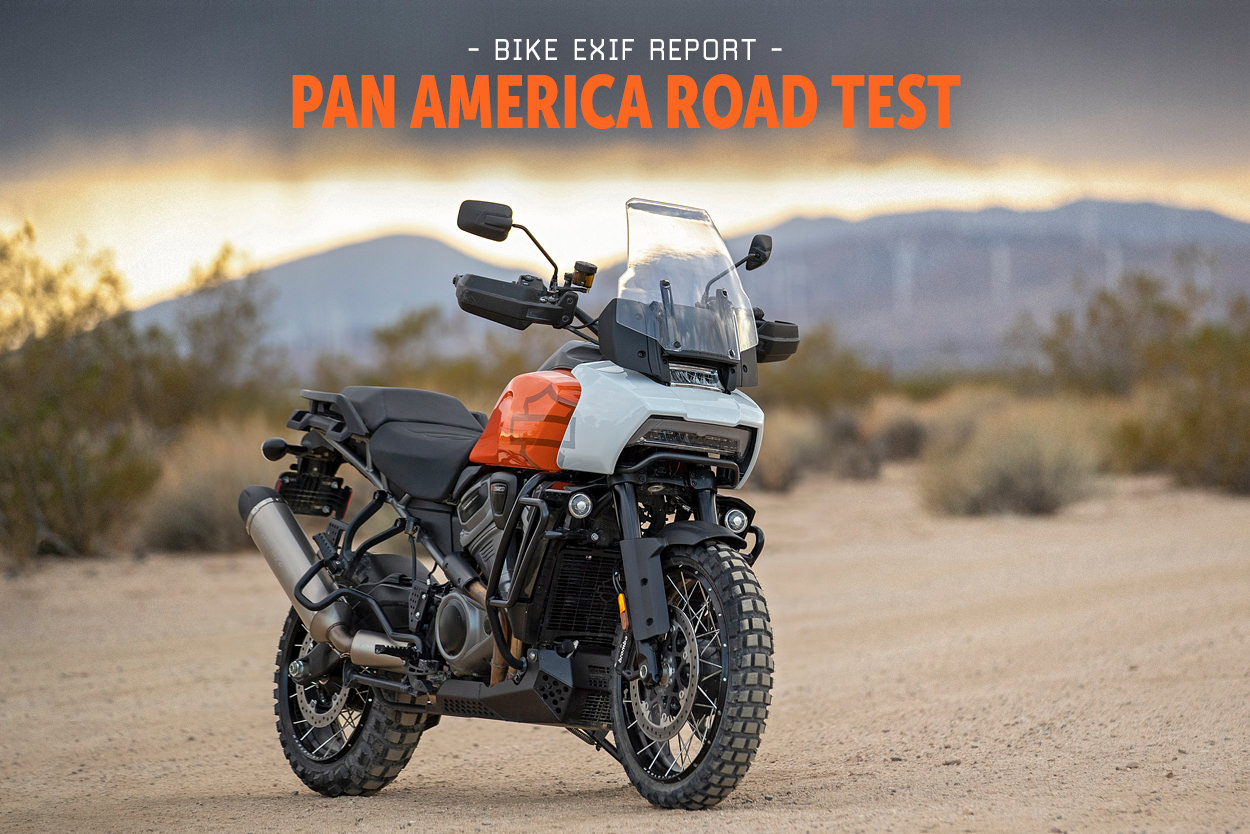 “I got to say, you’re looking older.”—Ellis
“I am older.”—Sheriff Ed Tom Bell

Amongst my Rushmore of cherished films, No Country For Old Men anoints the viewer with myriad lyrical gems and witticisms.

The above exchange percolated to the front when, not five minutes into my arrival at Harley-Davidson’s press launch of their new Pan America 1250, an affable employee offered two-inch “Tall Risers” and a “Tallboy” seat. 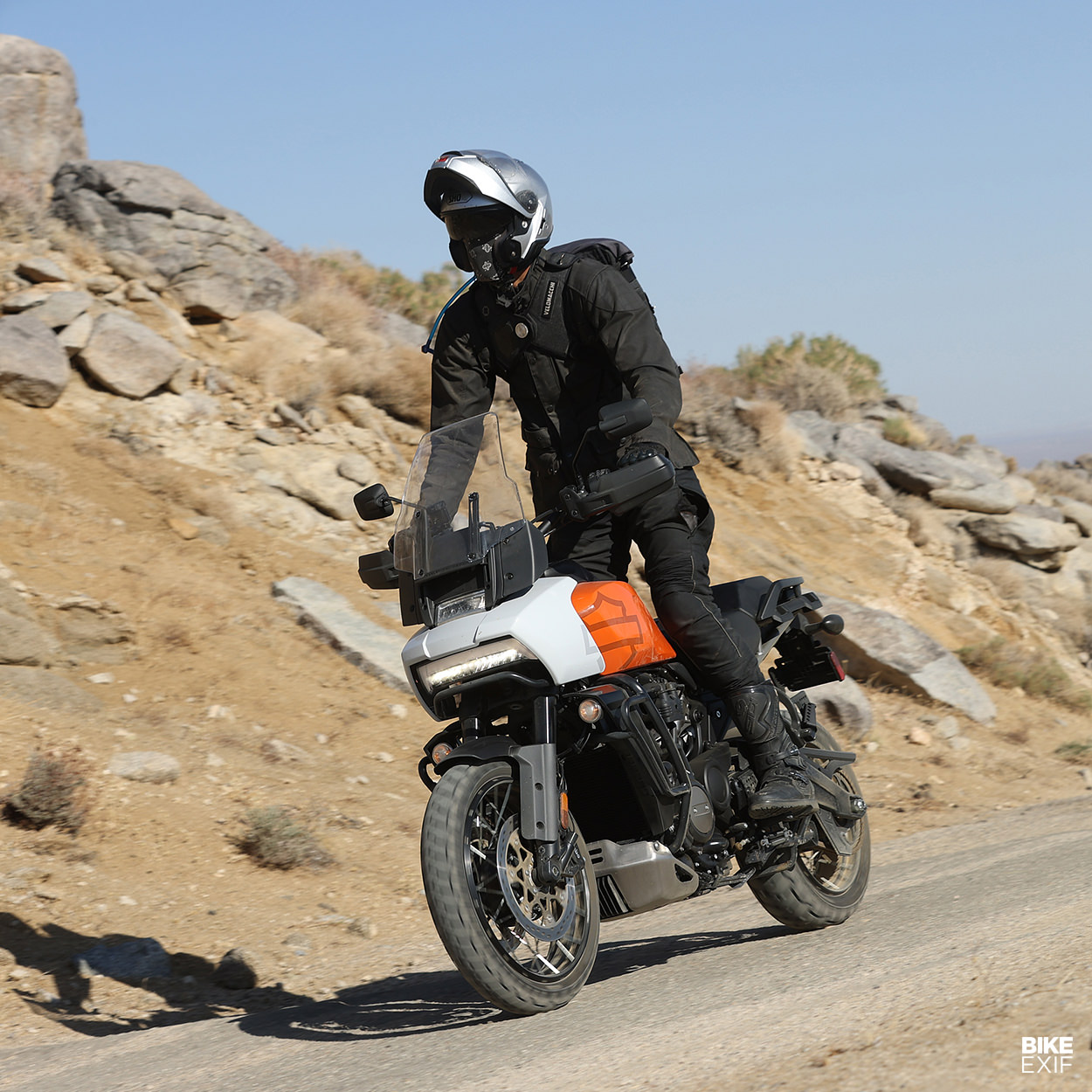 At 6’6” and having worked on the OEM side for numerous bike launches, this was a welcomed first. But this is Harley-Davidson, after all. They pitch a big tent. If you’re seven feet tall, they will find a way.

On this day, I was at RawHyde Adventures in Castaic, California, an hour north of Los Angeles and amidst the Mojave Desert. Over the next 48 hours, I would ride hundreds of miles through varied terrain and topography atop the 2021 Harley-Davidson Pan America Special—Milwaukee’s 150 horsepower, 92 ft/lbs torque, 559 pound (wet) and 100-percent beakless adventure-touring machine. 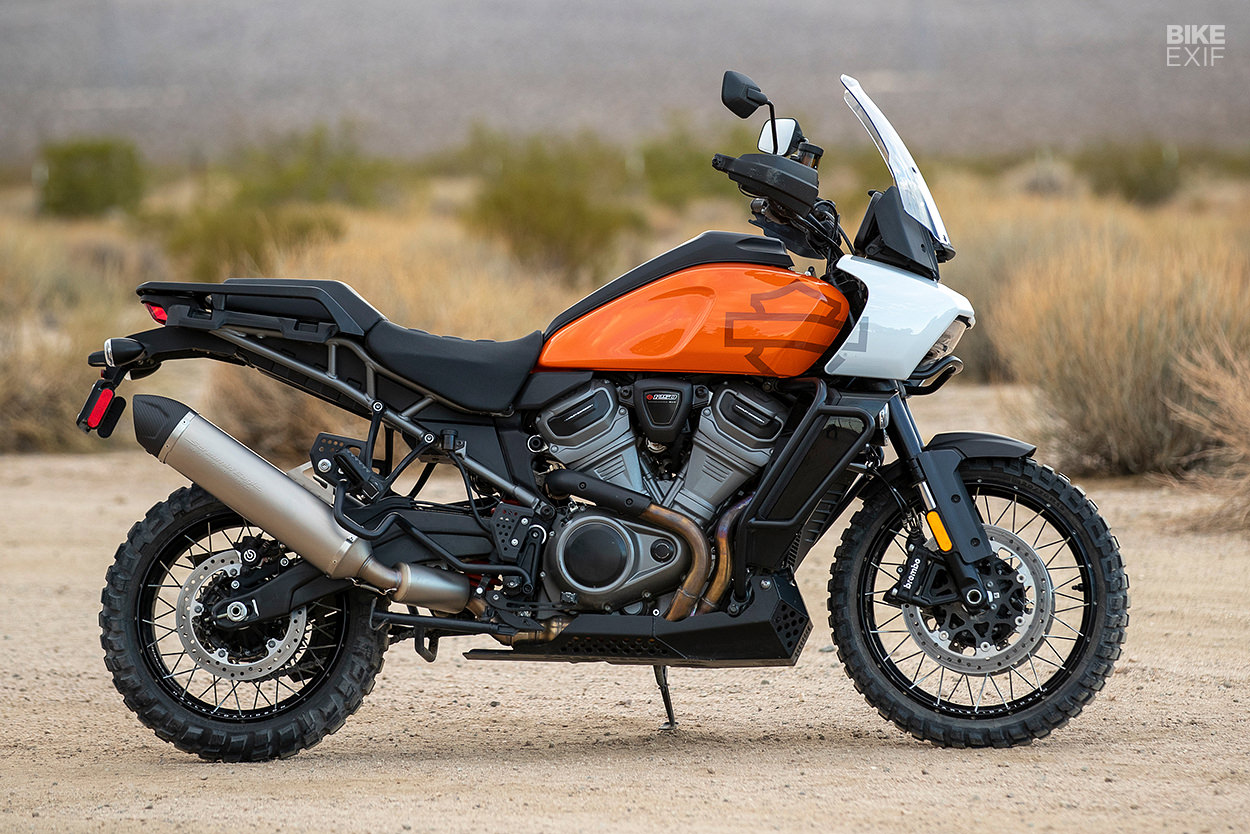 In short, and with apologies to our friends from across the pond, it is the real deal.

We all know Harley’s challenge, so I won’t spend too many words dissecting it. They print money but their ridership has crested the hill. With new-ish CEO Jochen Zeitz canning the old-guard’s “More Roads to Harley” initiative and introducing the “Rewire” and “Hardwire” strategies, there is a definitive vision—but is it the right one? 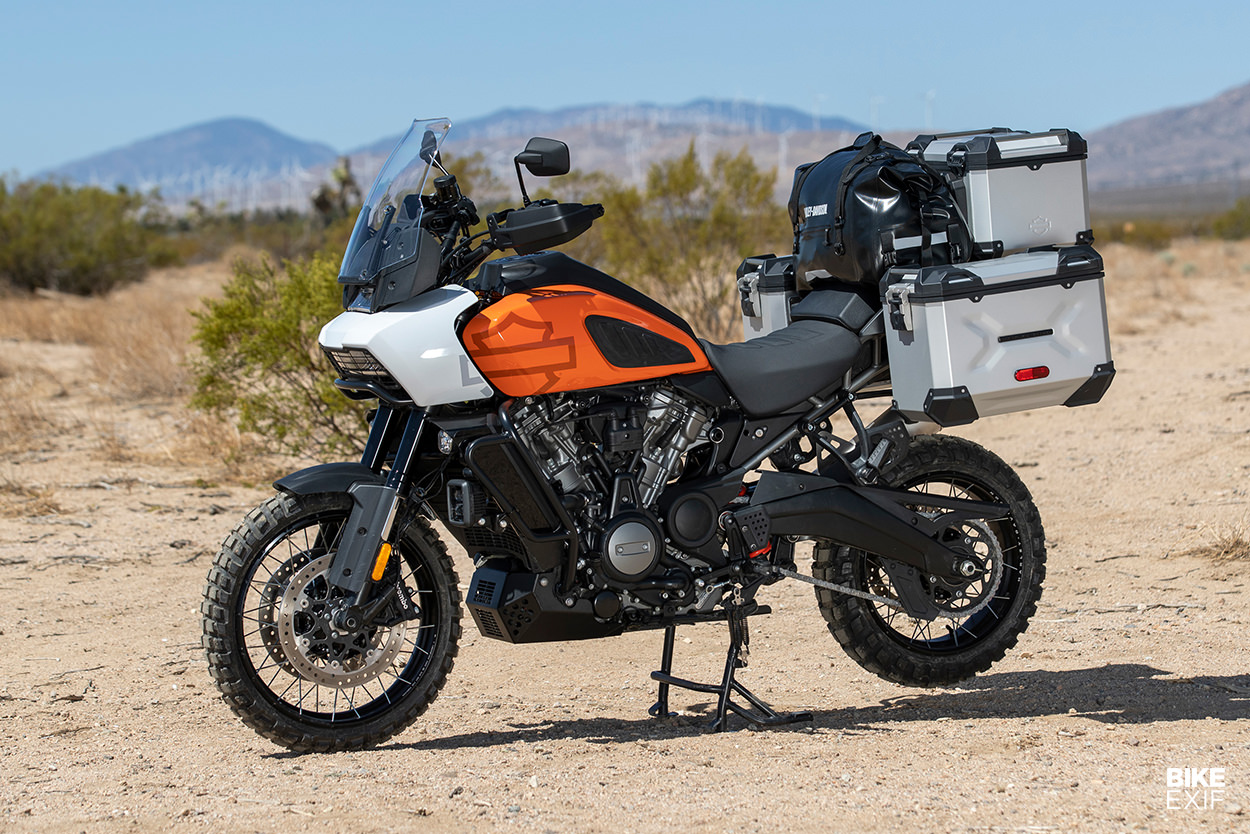 Reading tea leaves isn’t amongst my skillset. All I know is that the perhaps-axed Bronx streetfighter looked a brilliant choice to cultivate dollars from Millennials and unders.

Nevertheless, today we’re focusing on Harley’s foray into the ADV market. If you’d like some homework, feel free to dive into the Pan America’s alphabet soup of IMU, C-ELB ABS, C-TCS, DSCS, HHC, RLM, and TPMS.

Essentially, this bike has all the electrical nannies, protections, and components one would expect on a $20,000 motorcycle aiming to compete with Bavaria’s finest. Not to diminish the meticulous development of the machine, but it’s the least any discerning customer should expect. 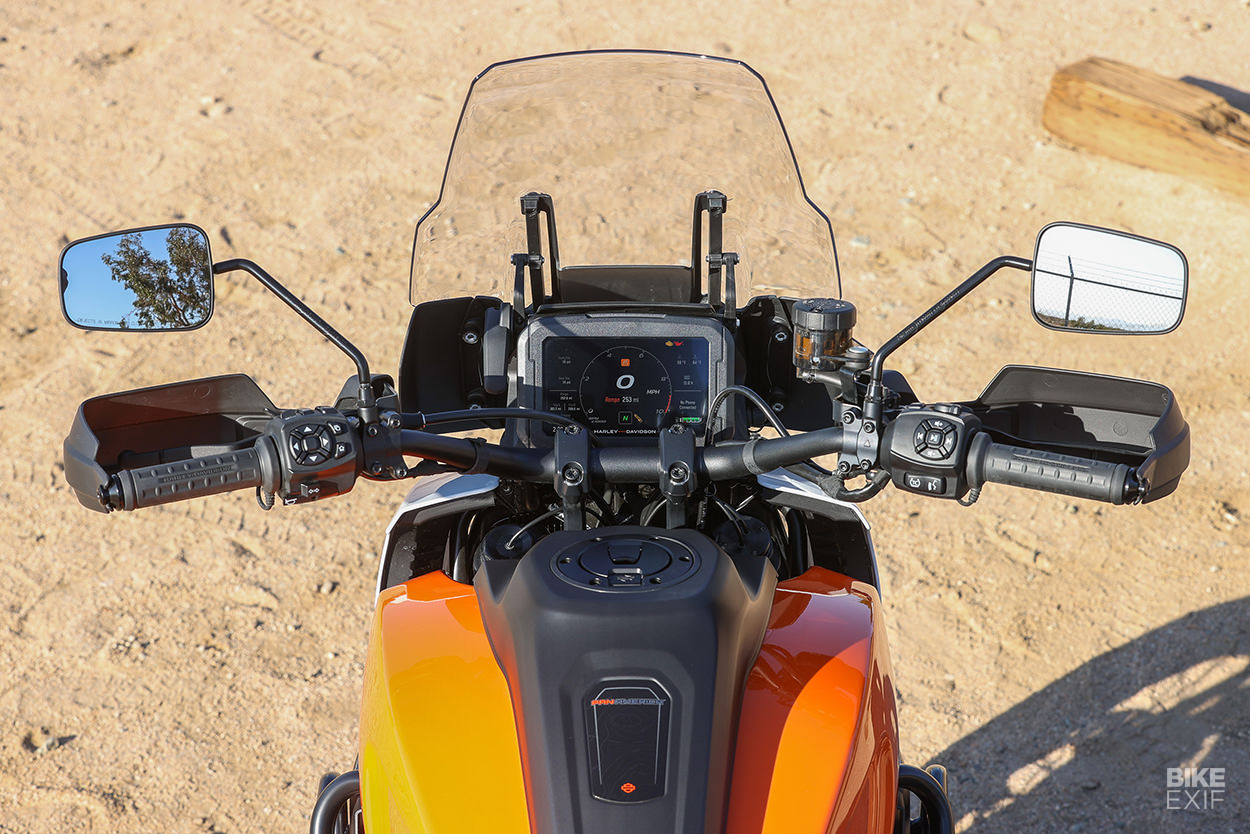 Another acronym, ARH or Adaptive Ride Height, does pique interest. A $1,000 option available only on the Special, it works with the semi-active Showa suspension (featuring 190mm/7.48 inches of front and rear suspension travel) to lower seat height by one to two inches (depending on rear pre-load) when the bike is stopped.

When the Special gets moving, ARH does its thing and returns the bike to optimal ride height. There’s a lot more there, such as Short and Long Delay modes, but credit where it’s due: the system works imperceptibly and as advertised. 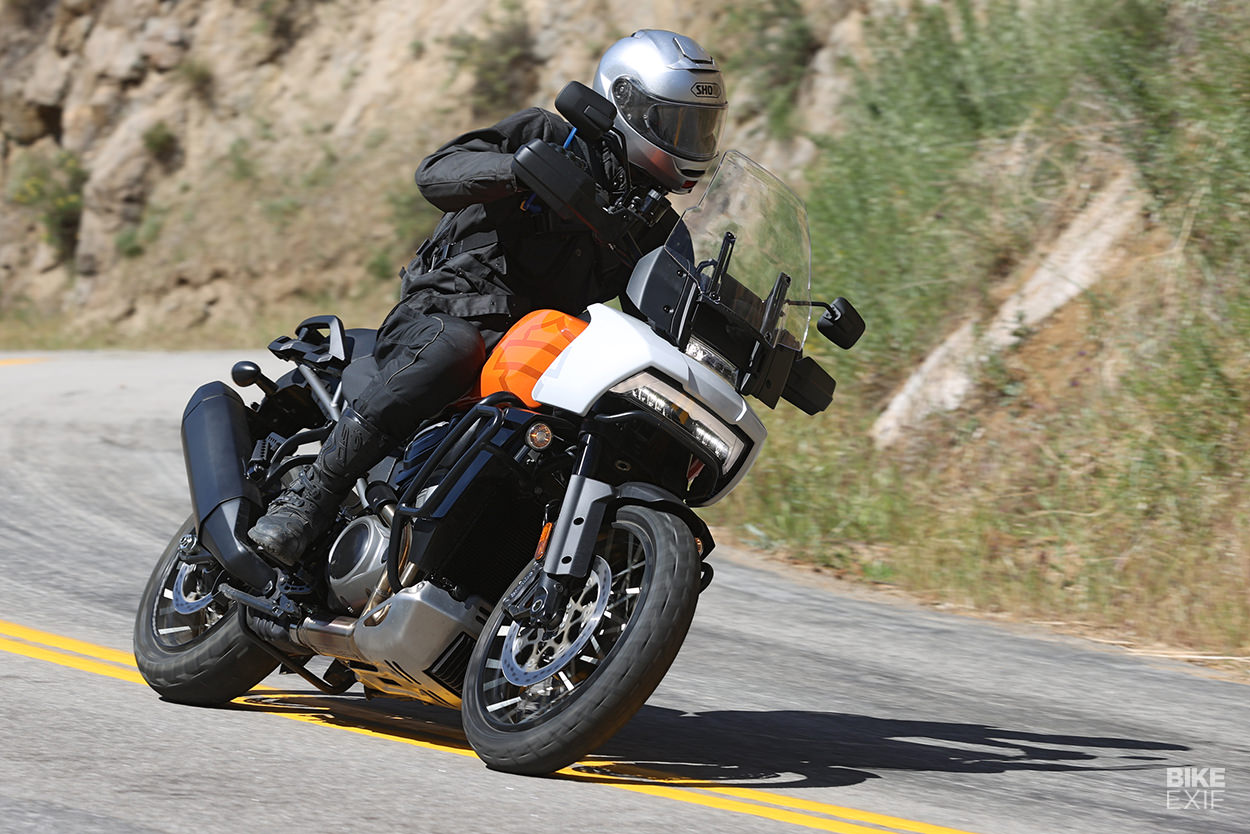 Human giraffe that I am, flatfooting is rarely an issue, even on the tallest of dirt bikes. For the vast majority of riders though, especially when perched on tenuous off-road ground, it’s a definite benefit.

The all-new liquid cooled 1250cc V-Twin engine, called the Revolution Max, is a central member of the chassis and thoroughly modern. It has double overhead camshafts, variable valve timing, reaches a peak 9500 rpm, and complies with Euro 5. 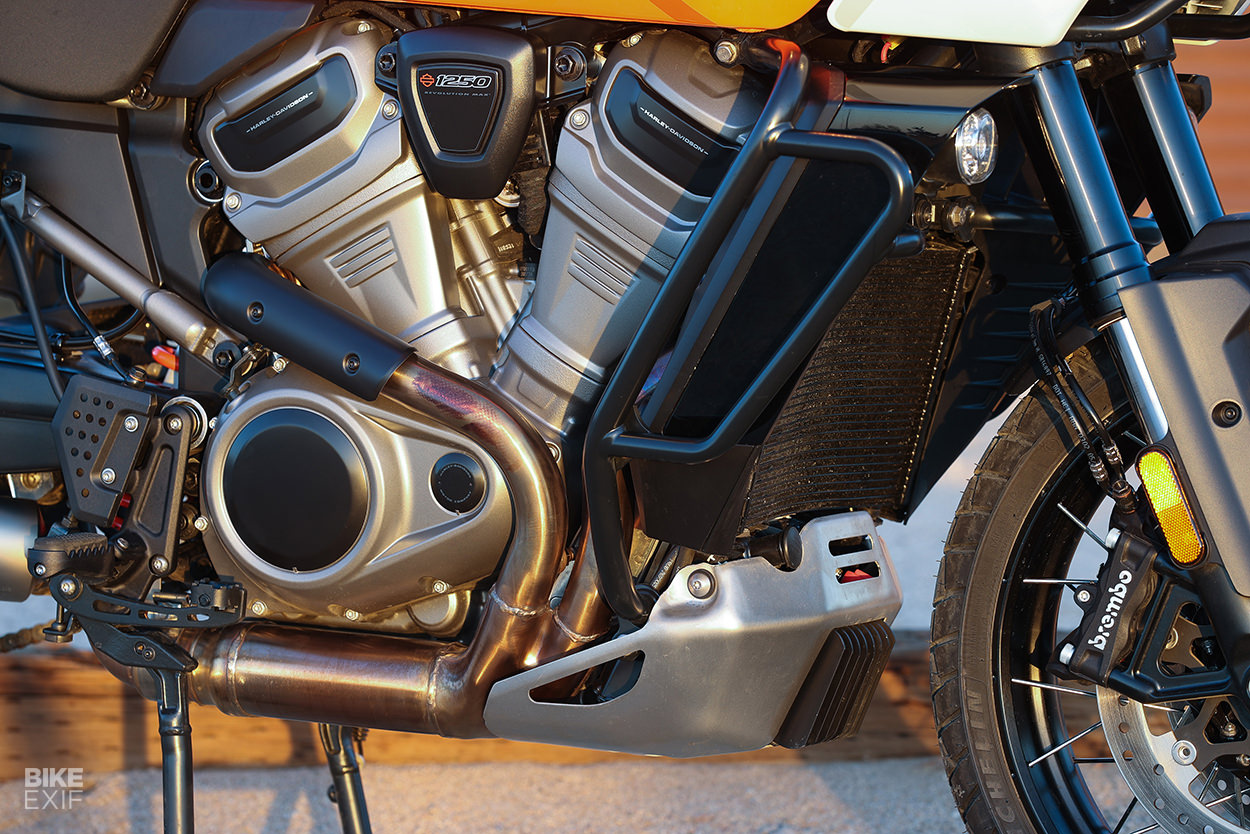 In the Mojave, engine or exhaust heat was never an issue. While operating best on 91 octane, it can run on lower octane—though with sacrifices to power and the EPA-confirmed 46 mpg fuel efficiency.

A chain, rather than belt, commands the final drive. The rider manipulates the six-speed transmission with a slipper clutch designed to smooth downshifts and prevent rear wheel slip or hop.

Both Pan America models hit the ground with a 19- and 17-inch front/rear wheel combination. Michelin Scorcher Adventure tires and cast aluminum wheels are stock, but Michelin Anakee Wild tires and off-road-friendly laced wheels (the latter, $500) are options on each bike. 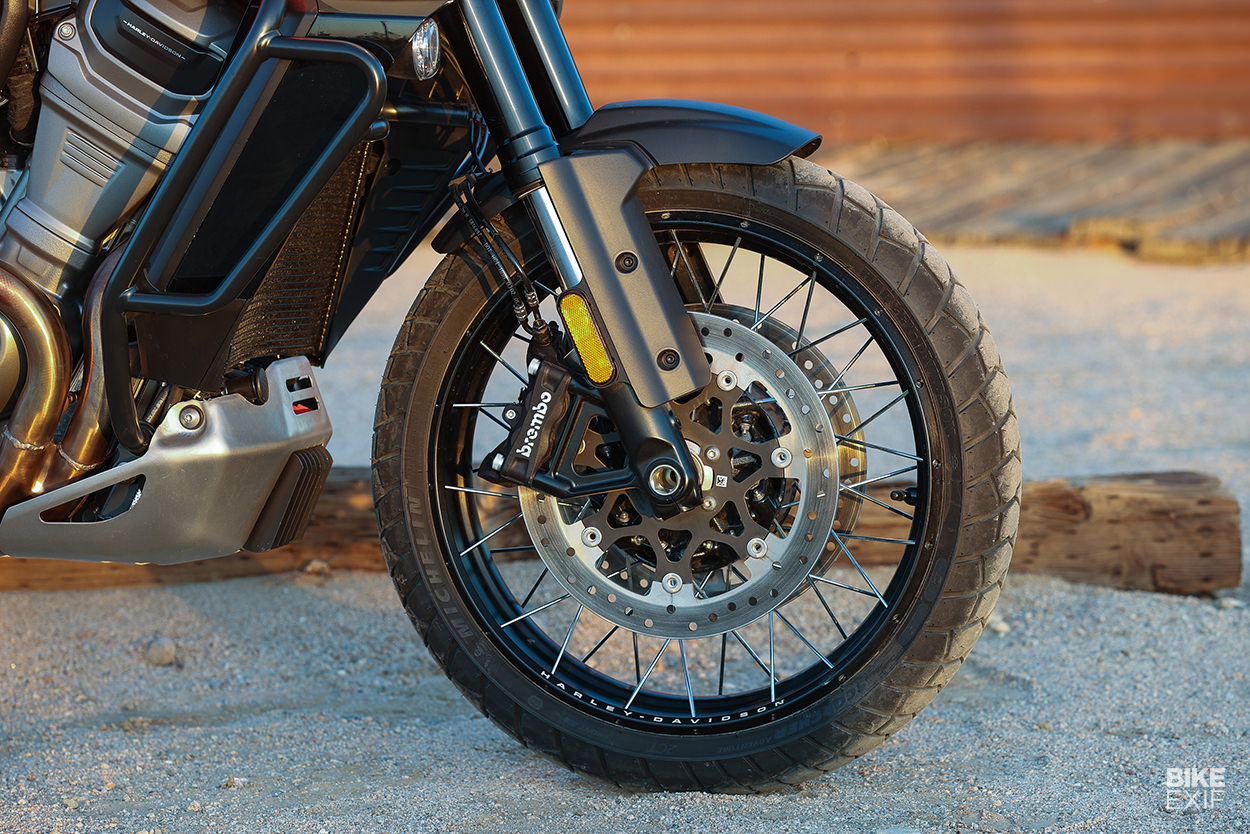 Most adventure rides involve pounding some pavement, and here the Pan America 1250 Special excels. Throttling to 5,000 or so rpm, the engine is smooth, efficient, and with a pair of Hearos, quiet.

Amidst 50 mph wind gusts and through tricky 18-wheeler crosswinds, the Harley was unfazed. But as a mini Manute Bol, I could do with a much taller or much shorter windscreen. (Harley, of course, offers both.)

The 6.8-inch TFT touchscreen is a tad busy, surrounding a digital speedo and tach with quadrants of customizable widgets. Though the font could be larger, even with my supposed 20/13 vision, sun glare did not exist. 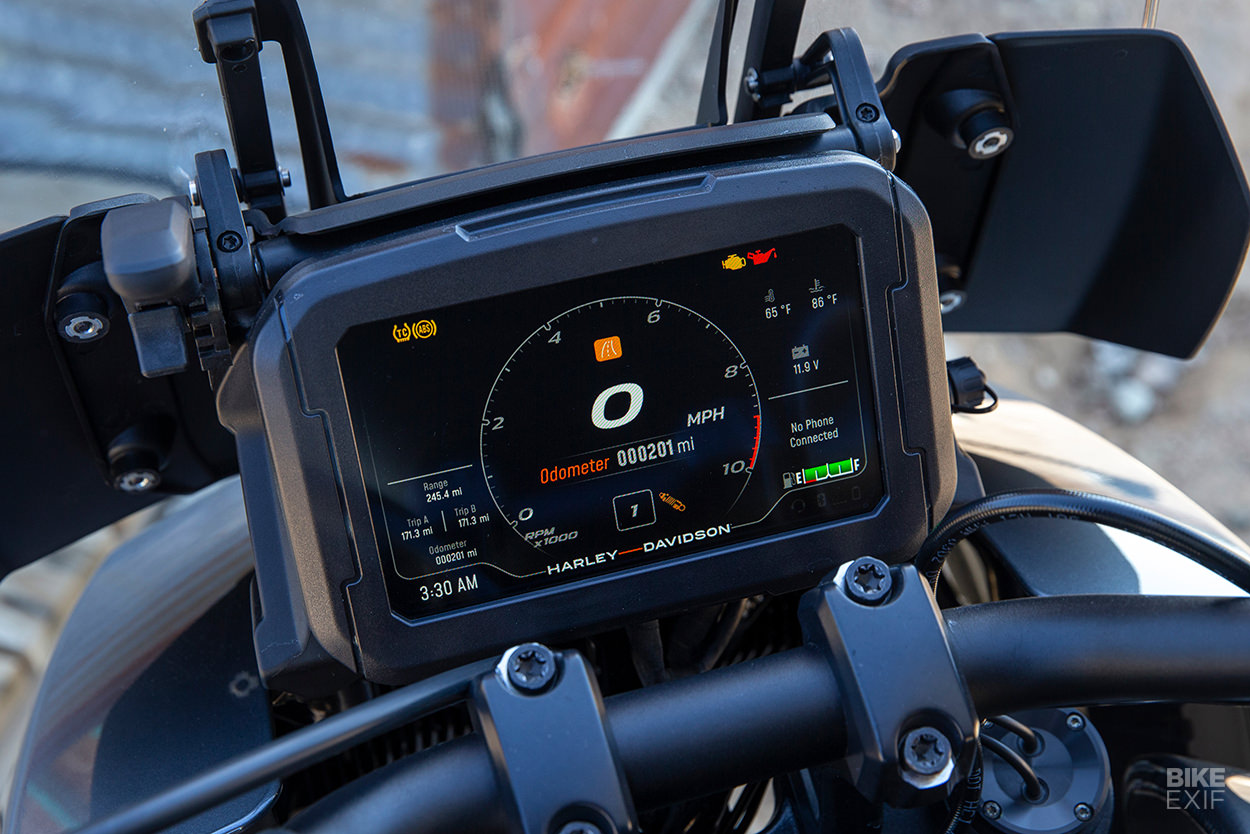 Phone pairing was simple enough. Download the Harley app (Android or iOS), click a few buttons, and voilà. In tandem with a Bluetooth headset, phone and music functions are controlled with a flick of the left thumb underway, as well as on the touchscreen, albeit when stationary.

I appreciated the screen’s ability to show a full screen of navigation, or display turn-by-turn on one of the aforementioned widgets. It wasn’t Google Maps or Waze, but it did the job.

We didn’t ride at night, but the time-tested Daymaker LED lighting and Advanced Daymaker Adaptive headlight (optional on the Standard) should do the trick. None of the above should surprise. Harley gon’ Harley. 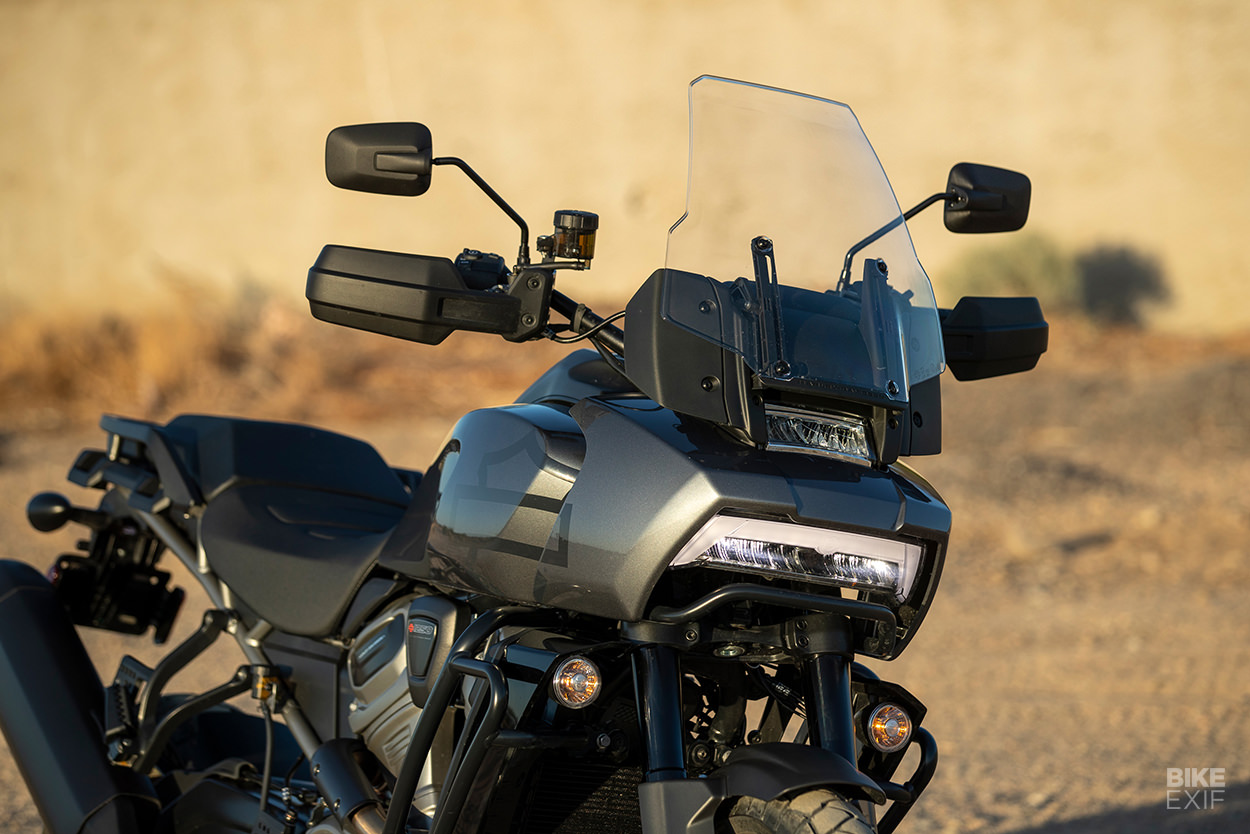 The big ‘Murican more than held its own when things got twisty and dynamic. Above 5,000 rpm, the engine awakens with a lovely combination of sound and feel, amplified by the accessory Screamin’ Eagle exhaust, which also saves six pounds. As one Harley engineer declared, they kept none of the bad vibrations and all of the good.

The engine revs freely and never wants for power, though tall-ish gearing hides a bit of the torque from the rider’s grasp. The on-road portion of our test did not faze the Scorcher Adventures, nor did the stock tires fall apart when we explored a bit off-road. Hard pack, gravel, and soft sand weren’t issues. There was plenty of range left in the 5.3-gallon tank. 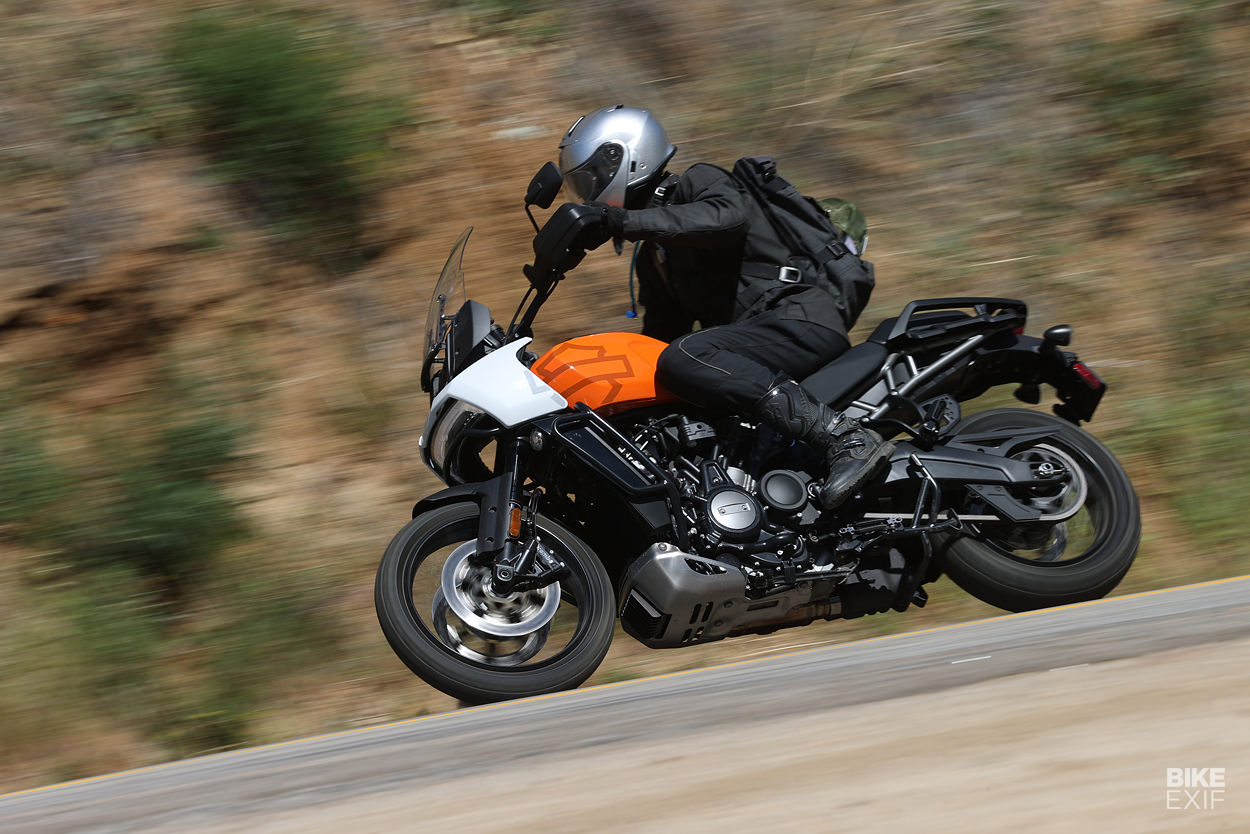 Ergonomically, the knee bend for my freakish self was a bit tight despite the Tallboy seat being placed in the tall setting. (Regardless of stock, Tallboy or Reach seat choice, the Pan America features high and low seat positions—giving or taking an inch).

My right wrist did protest after our on-road day. Perhaps the risers were a bit too tall, or perhaps it was the rake/angle of the bars themselves. I kept thinking how a rally-style seat would alleviate some of the trouble, as my ability to scoot back and forth was limited by the passenger seat.

It took the full two days to conform to the electronic turn signals, which depart from a century of precedent. Instead of that satisfying center click to cancel, any additional click, regardless of which way, cancels. Many a rider suffered from a rogue indicator. Cue Abe Simpson shaking his fist at the cloud. 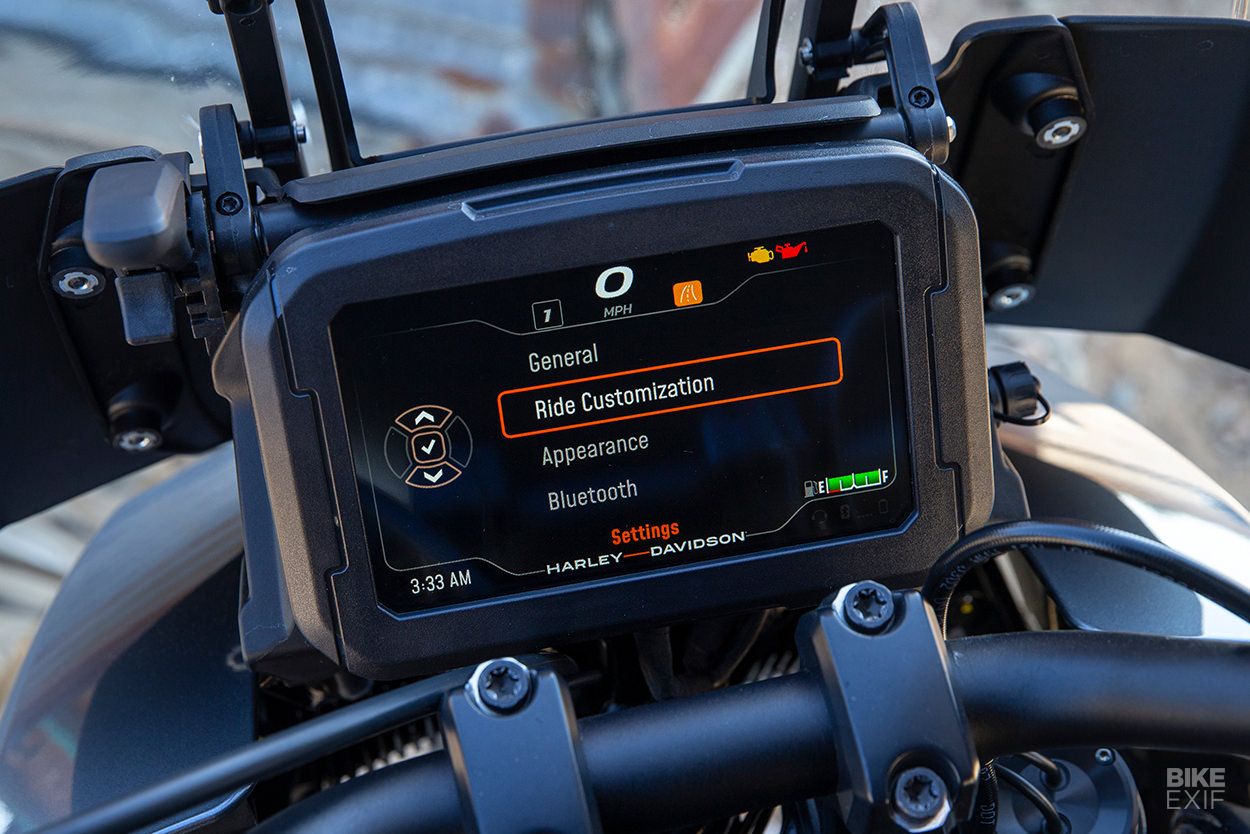 The Pan America offers five pre-programmed riding modes: Rain, Road, Sport, Off-Road, and Off-Road Plus. The Special adds three customizable modes, and the Standard model one. In keeping with the competition, they allow the rider to tinker.

If you’re familiar with any modern-day adventure bike, you’ll know how this works. The modes are as advertised. On-road, I generally stayed in Sport, which dialed back the nannies and allowed me to give the bike the beans in relative safety. At a high-level, Road is to Sport as Off-Road is to Off-Road Plus. Here, Harley got it right.

On to the proverbial elephant… 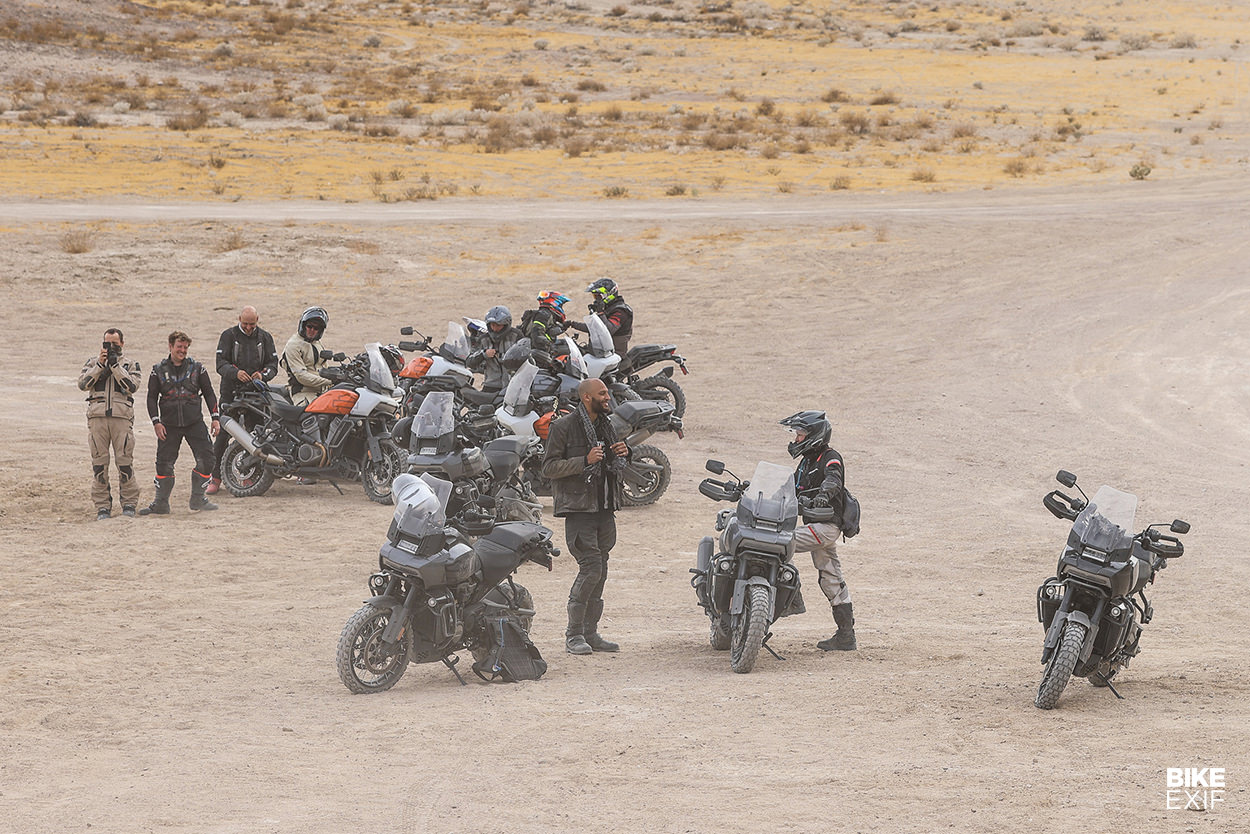 Our focus for the second day was off-road. I have a decent amount of experience, from the red clay of Georgia to the deserts of Southern California, Nevada, and even Morocco.

Still, I would not call myself anything but a dude trying not to bust his ass. I tend to impede the bike, rather than the other way around. In a lot of ways, I represent a segment of rider Harley is targeting with the Pan America.

Equipped with a used set of Anakee Wilds, we departed RawHyde at 9:45 am. Sweaty not from heat, but trepidation, I was in my own head. After a highway blast, on which the Anakees served just fine, we made the turn off-pavement and up I stood. I reminded myself of a piece of wisdom bestowed by Jim Hyde, RawHyde’s founder: How often do you have the chance to be nervous?

No problem there, Big Jim! 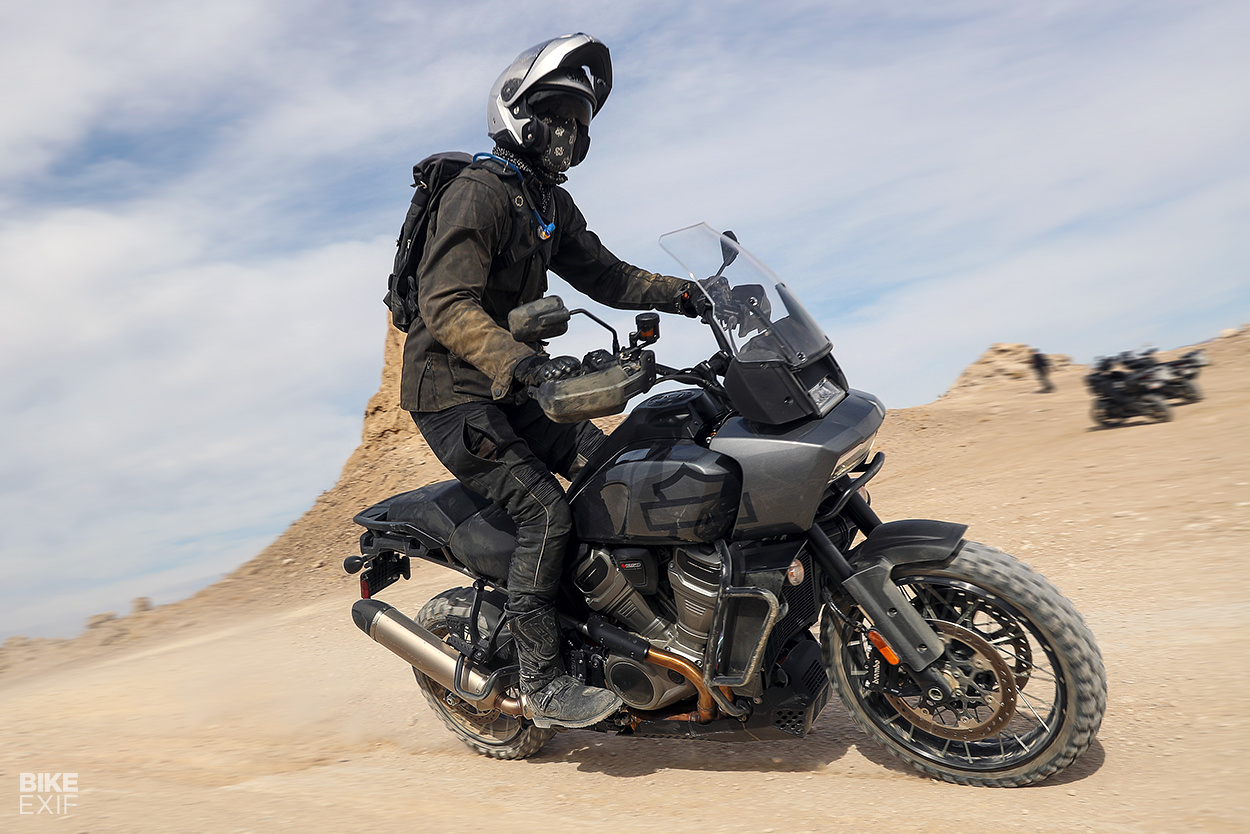 And off we went. Generally, second gear and Off-Road Plus mode were my tactics. I spent the early stages building up confidence in myself, rather than confidence in the bike. Not so deep down, I knew the bike could handle everything we would experience on this day. With the knowledge that over a million miles of development was split 50/50 on- and off-road, I was beginning to feel good.

I was getting out of my own way until I forgot a basic tenet of navigating the sand: keep your speed up! Instead, when I saw it my bowels clenched, I eased off the throttle, and down I went. 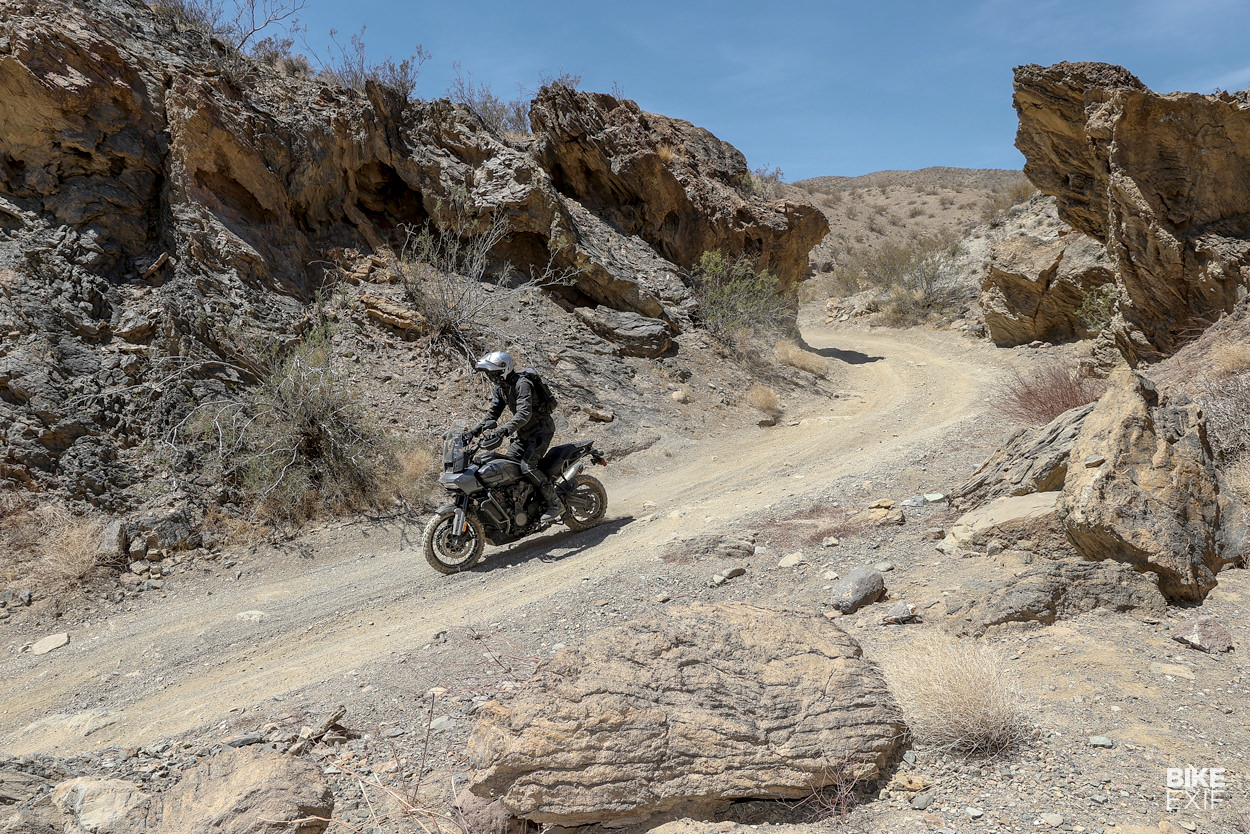 There I sat, first taking stock of my body, which appeared intact. Before Harley’s chase rider could catch up on his own Pan America (clad with the optional aluminum panniers developed with SW-Motech), I lifted the bike, peeped the damage, and breathed deep. It was ok.

The right mirror was askew and the right hand guard was detached. A screw here, a snap there and the only thing left to repair was my confidence. The Harley team asked me if I wanted to continue. There was no other choice. Once more unto the breach dear friends, once more…and off I went. 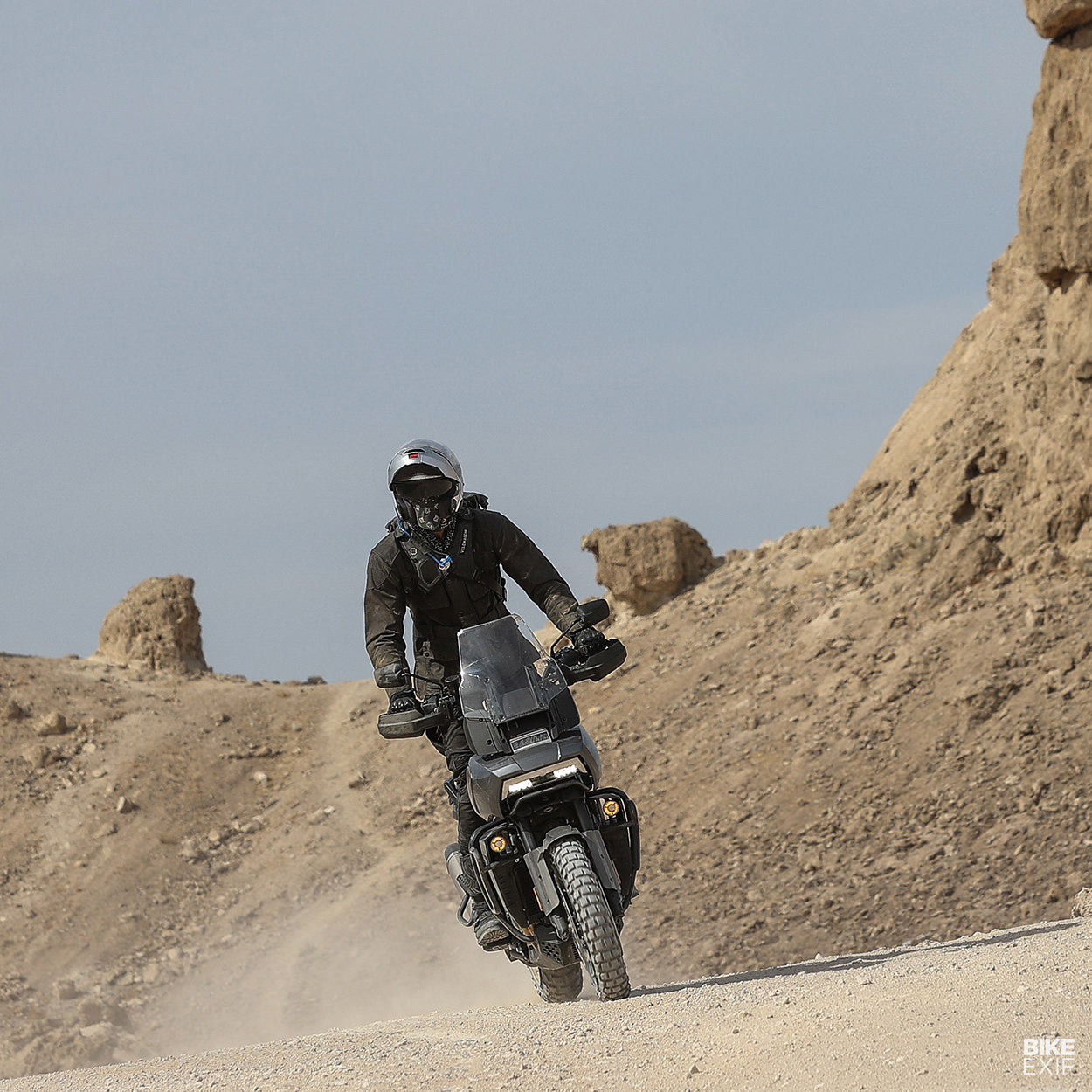 There was nary a protest from the Pan America. It took a bit for me to gain back any semblance of confidence. I dissected my error from all possible angles. I was stuck in my own head until I bossed a challenging climb, crested the hill, rounded a blind corner, and started to feel ok. An eighth of a mile or so ahead and down, I spied a smoking, smashed bike and motionless rider.

Fearing the worse, I completed the descent, dismounted, and ran to their side. They could not keep their feet. Through a roughed up helmet, their eyes were distant and glassy. The Harley team arrived soon thereafter. We tended to the rider as best we could, but a hospital trip was in their future. The rider was badly concussed. The bike was totaled. My heart was heavy and on ten. 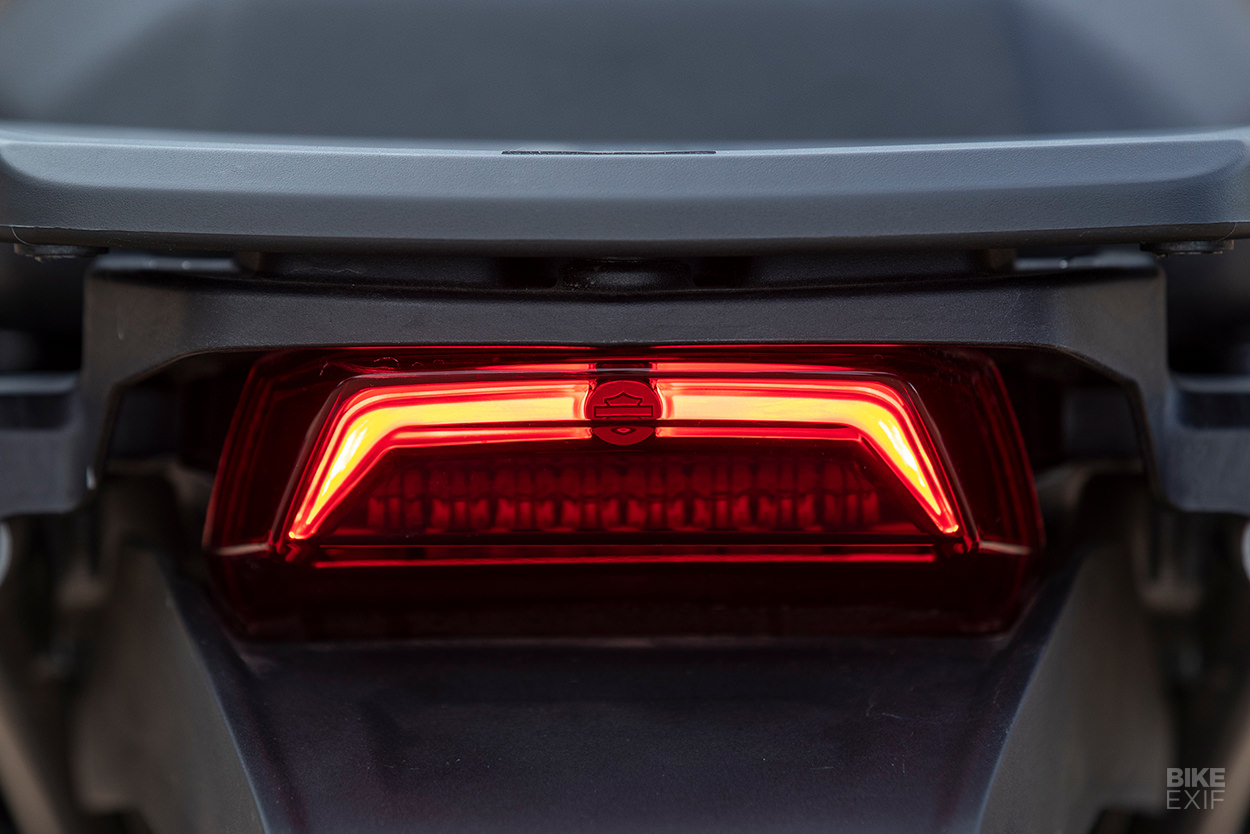 We hadn’t yet hit lunch.

“This country is hard on people. Can’t stop what’s comin’. It ain’t all waitin’ on you. That’s vanity.”—Ellis

The rest of the day was a bit more straightforward. There were a handful of drops from the other journalists, but no further injuries. There were rocks, sand, dry seabeds, ascents, descents, and more pavement. 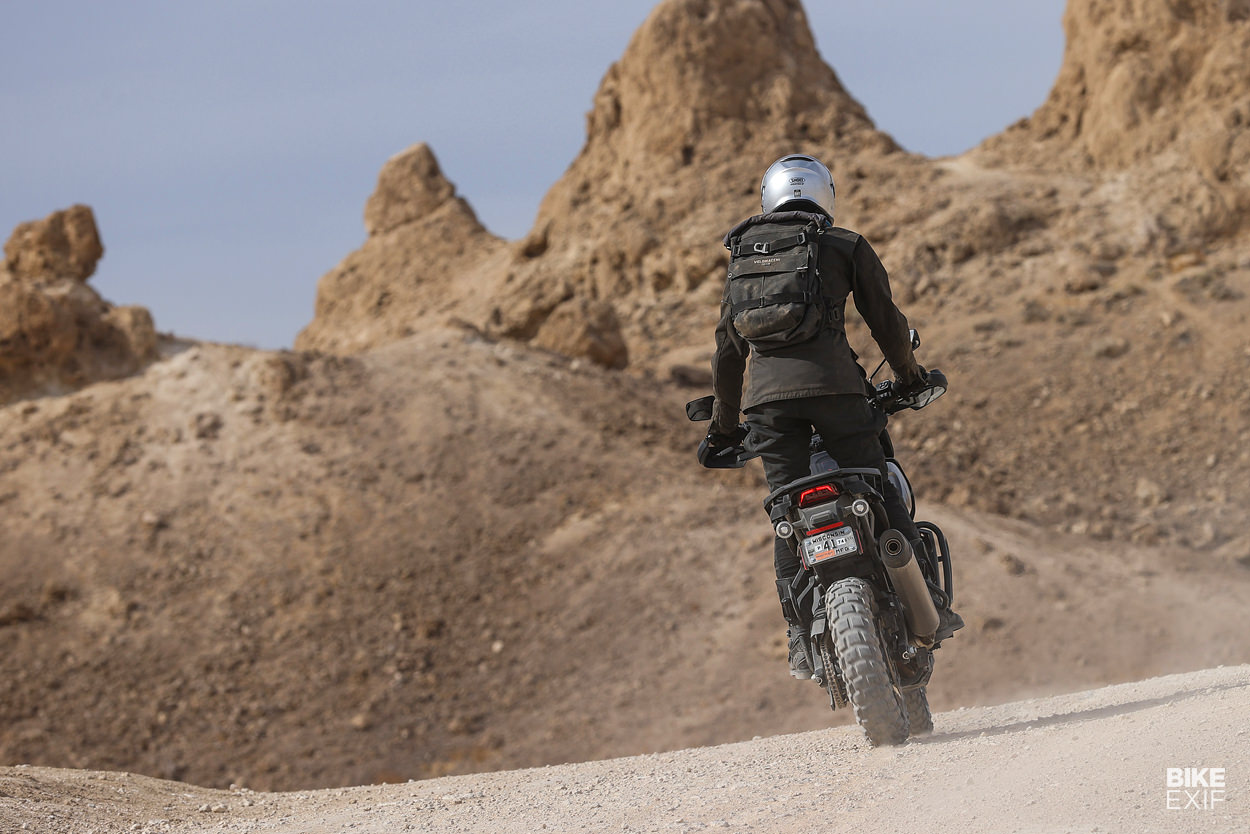 The Pan America’s electronic wizardry and specifications disappeared from mind. I eventually forgot about my own, comparatively benign spill. The bike disappeared from beneath me. There was nary a thought of the pandemic or current events. I found my flow.

As the sun descended, my confidence rose. The Pan America 1250 Special had successfully shepherded me through the ups and downs of a lifetime, in a day in the Mojave Desert. What more do we ask of an adventure-touring machine? 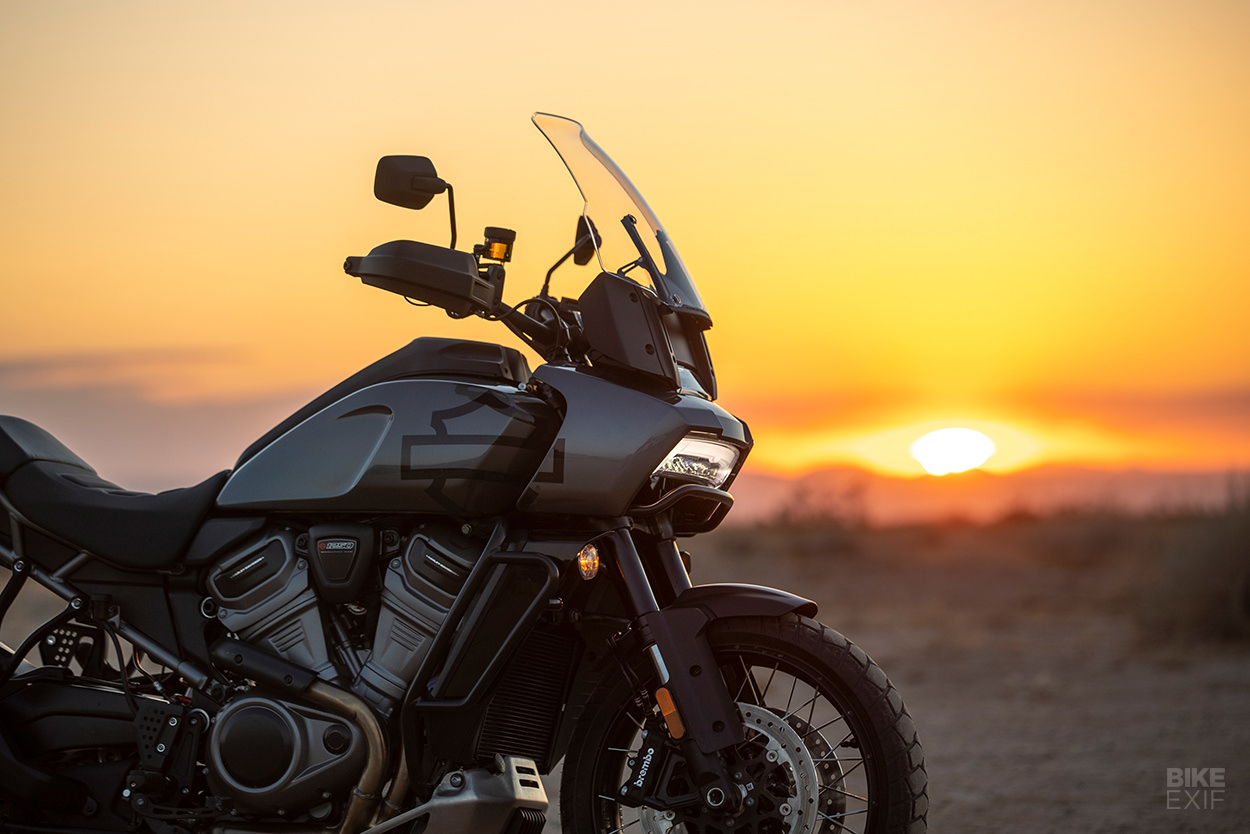 Disclosure from Lance Jones: Harley-Davidson paid for my flight, transportation to and from LAX (shoutout to David, my brilliant driver repping New Hampshire to the fullest), and room/board.