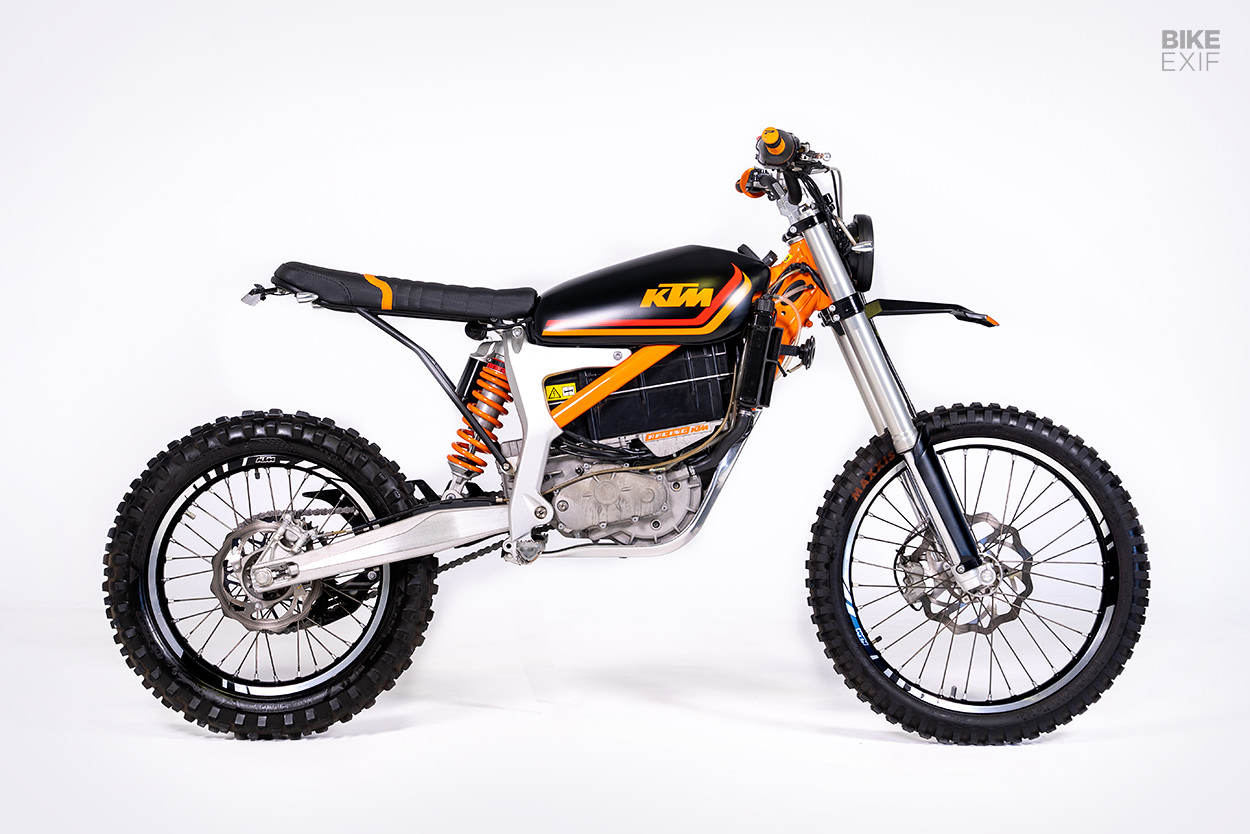 Any conversation about electric motorcycles will eventually turn to gripes about range and charging times. But if you just want to hoon around on trails with your friends on weekends, without alerting the locals, a small electric enduro makes sense. Which is why Tom Gilroy at Purpose Built Moto picked the KTM Freeride EX C for his latest project.

This KTM Freeride model packs 42 Nm of torque into a package weighing just 108 kilos [238 pounds], with a top speed of 80 km/h and a city range of 100 km. So it’s the perfect weekend weapon. 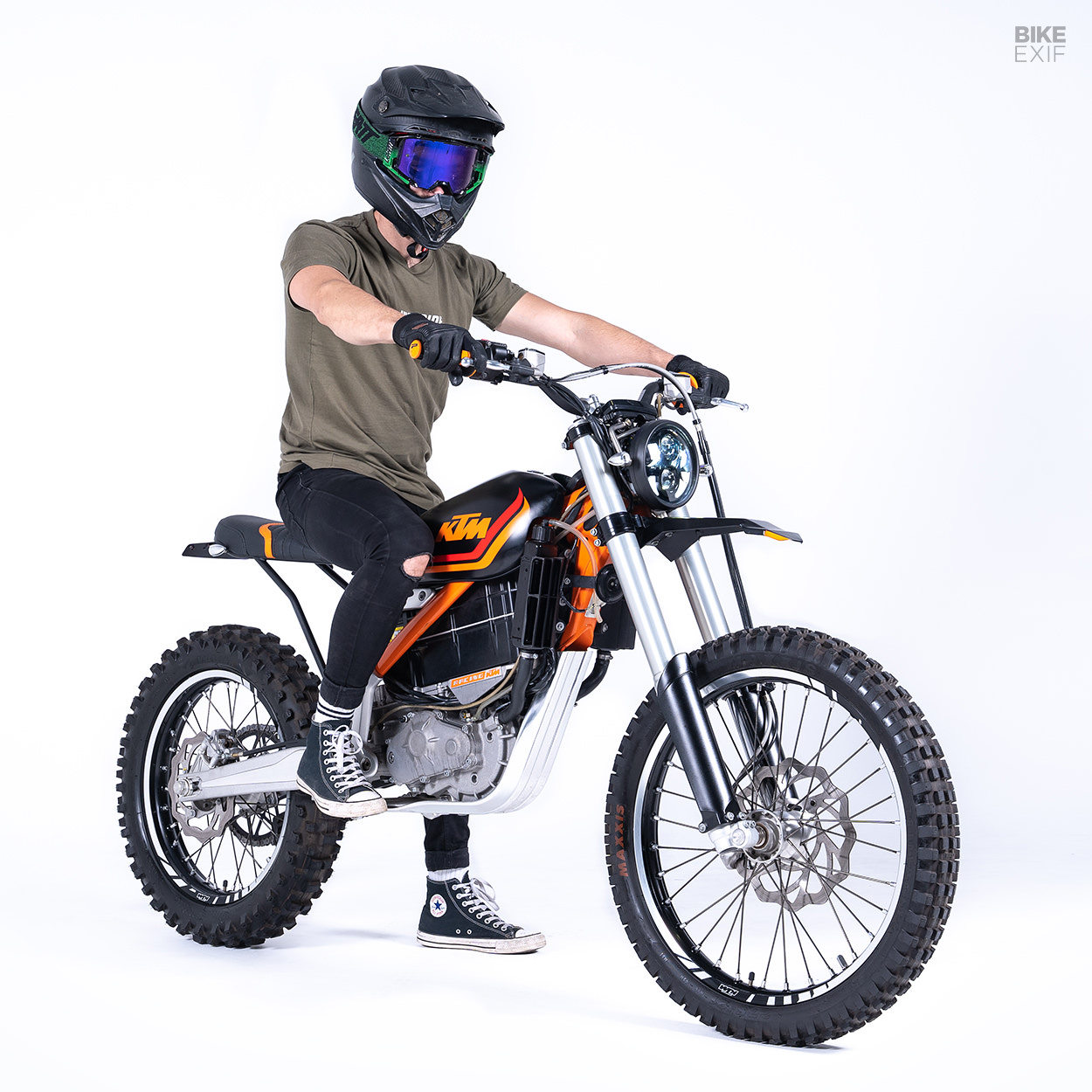 “I was excited to have a ride on this thing,” says Tom, “but I wasn’t excited about the way it looked. Like most E-motorcycles, it had a sharp appearance devoid of any shred of nostalgia. I think that’s a sticking point for converting a lot of riders to electric bikes.”

“My bet was if I could inject a touch of class, a little nostalgia and jam in a bit of PBM styling, I might get a few people off the fence and onto electric bikes.” 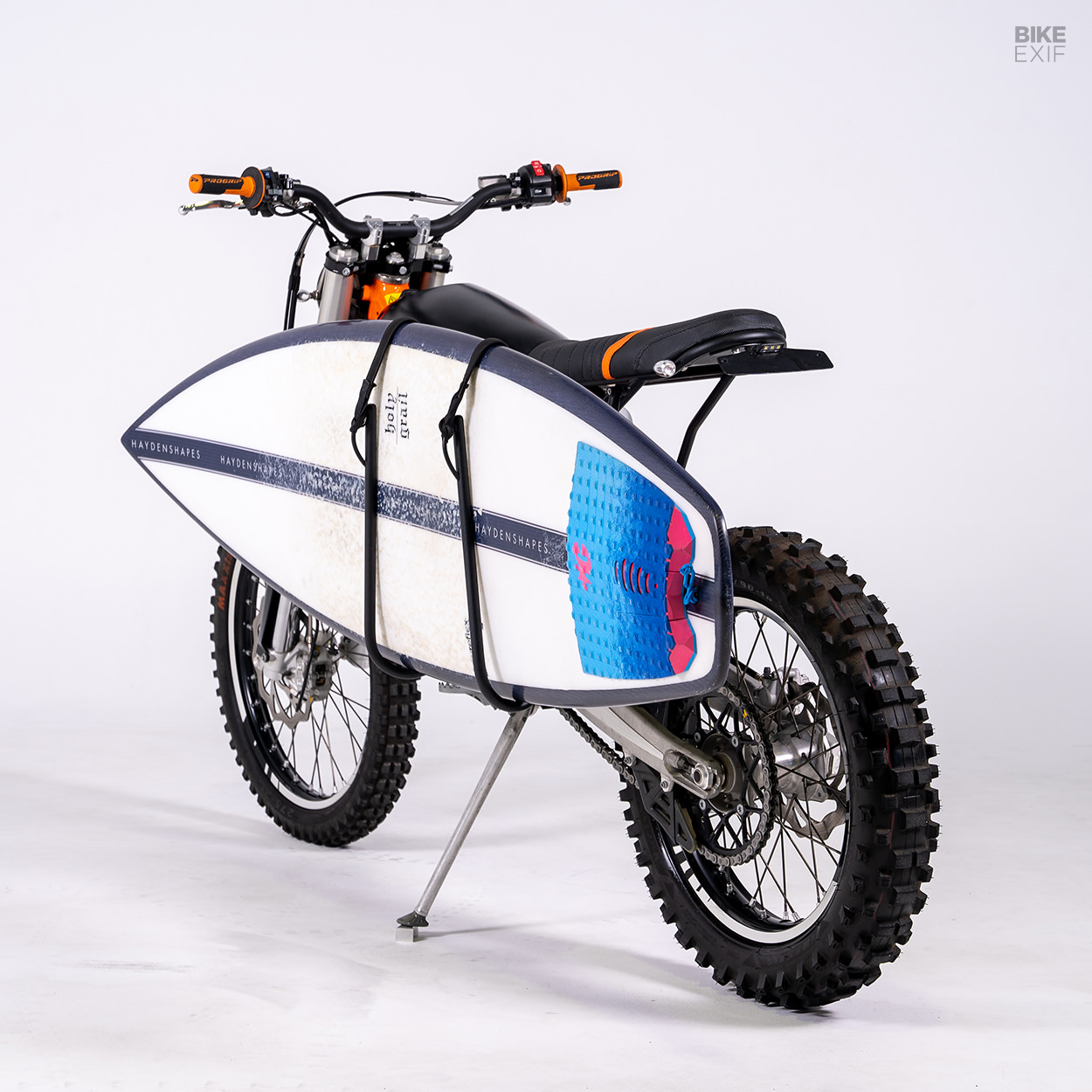 Tom hasn’t technically customized the KTM under the Purpose Built Moto banner though. Instead, PBM has teamed up with another e-bike enthusiast to form a new company, Grid Cycles. This scrambler their first official release, and there’s a Zero-based street tracker breaking cover soon too.

The Freeride EX C is made for pure off-roading—so it has no turn signals, no license plate mount, and minimal bodywork. “The teardown was simple,” says Tom. “Being a motocrosser, it’s built to be pulled down in five minutes track side; plastics off, power pack out, subframe gone.” 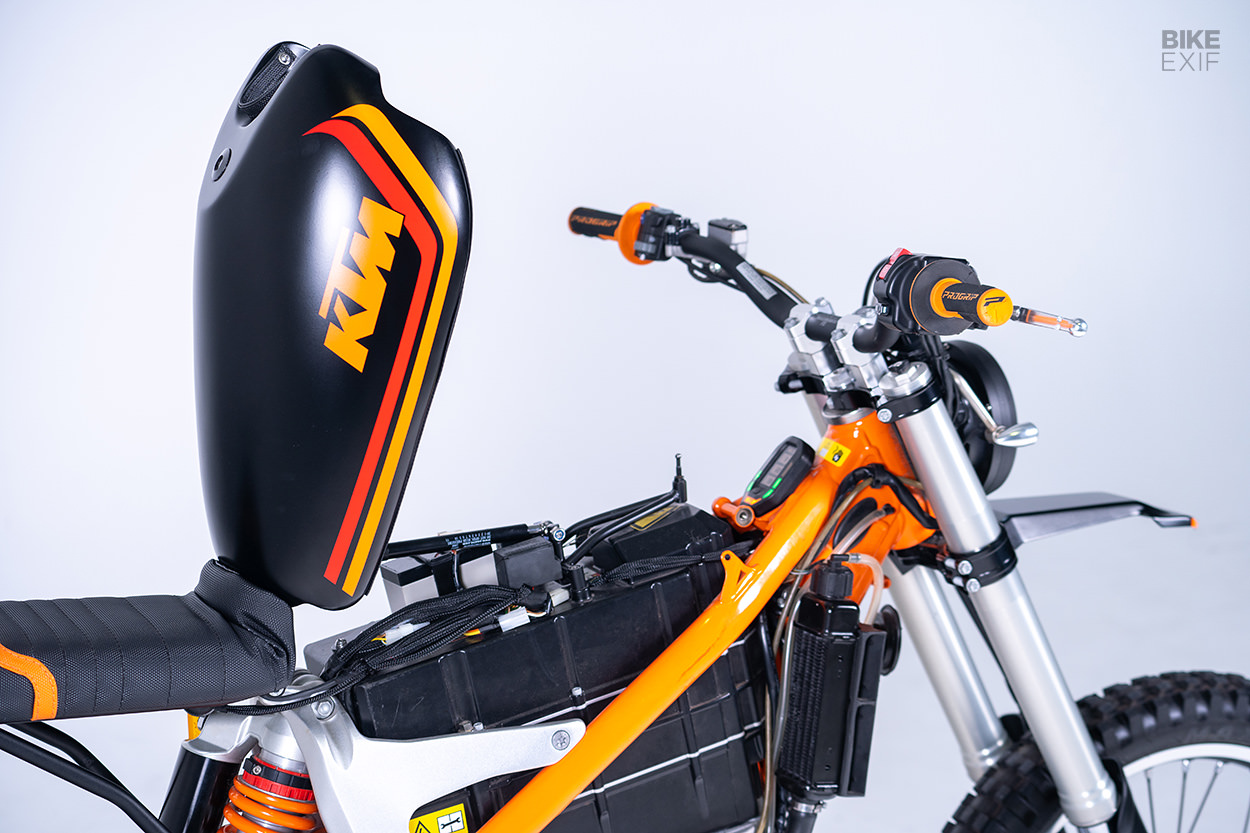 Tom had the idea to hollow out a vintage-style fuel tank, and turn it into a new cover for the battery, electronics and charge port. So he bought a few aftermarket options, and started measuring. In the end, a replica Yamaha XT500 unit from the late ‘70s ended up being the perfect donor.

Once the bottom was chopped off and the shell modified to fit, the crew fabricated a hinge system to provide access to the components underneath. A push button up front releases the tank from a custom-made latch, with a handle and gas strut to help lift it. Tucked inside the shell is a hidden fabric pouch—big enough to stow a smartphone or a pair of gloves. 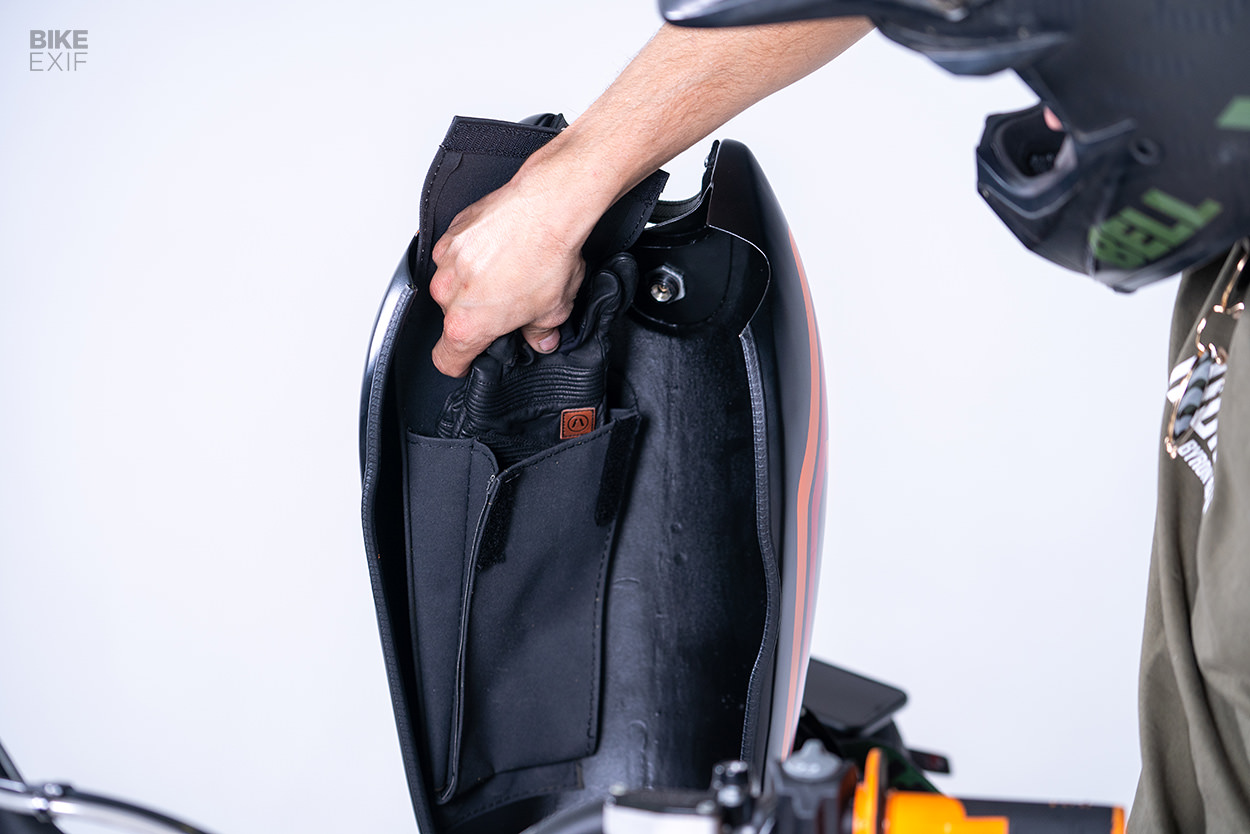 Tom didn’t want to hack the KTM’s main frame, so he fabricated a bolt-on chromoly subframe to hold a new custom saddle. Because of the tank’s hinge position, the seat had to be made with a two-piece base, so that part of it could flip up with the tank.

“The idea was to work with the KTM by just modifying the external bodywork,” says Tom. “That way we could more easily replicate this bike. The wheels would stay, the frame wouldn’t be repainted, and the running gear would remain untouched.” 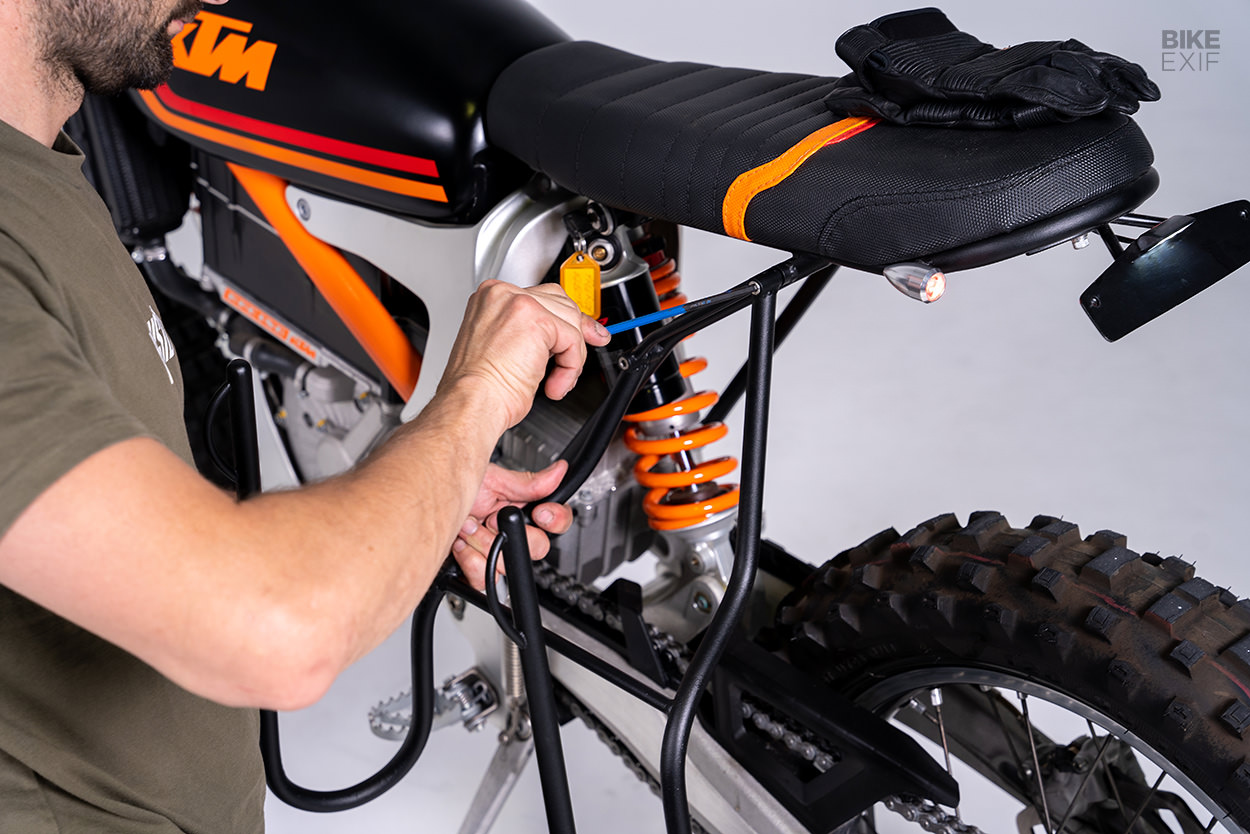 The left side of the subframe includes two extra mounting points, to fit a hand-made chromoly surfboard rack to. It bolts on in a hot minute, and leaves hardly a trace when it’s not fitted.

Up front, the team built a tubular bracket to hold a 5.75” Flashpoint LED headlight, and a pair of LED turn signals. Just below is a hand-shaped aluminum fender, similar to the one PBM put on their Harley Dual-Sporty. The tail wears a set of LED turn signal and taillight combos, and a small custom plate mount. 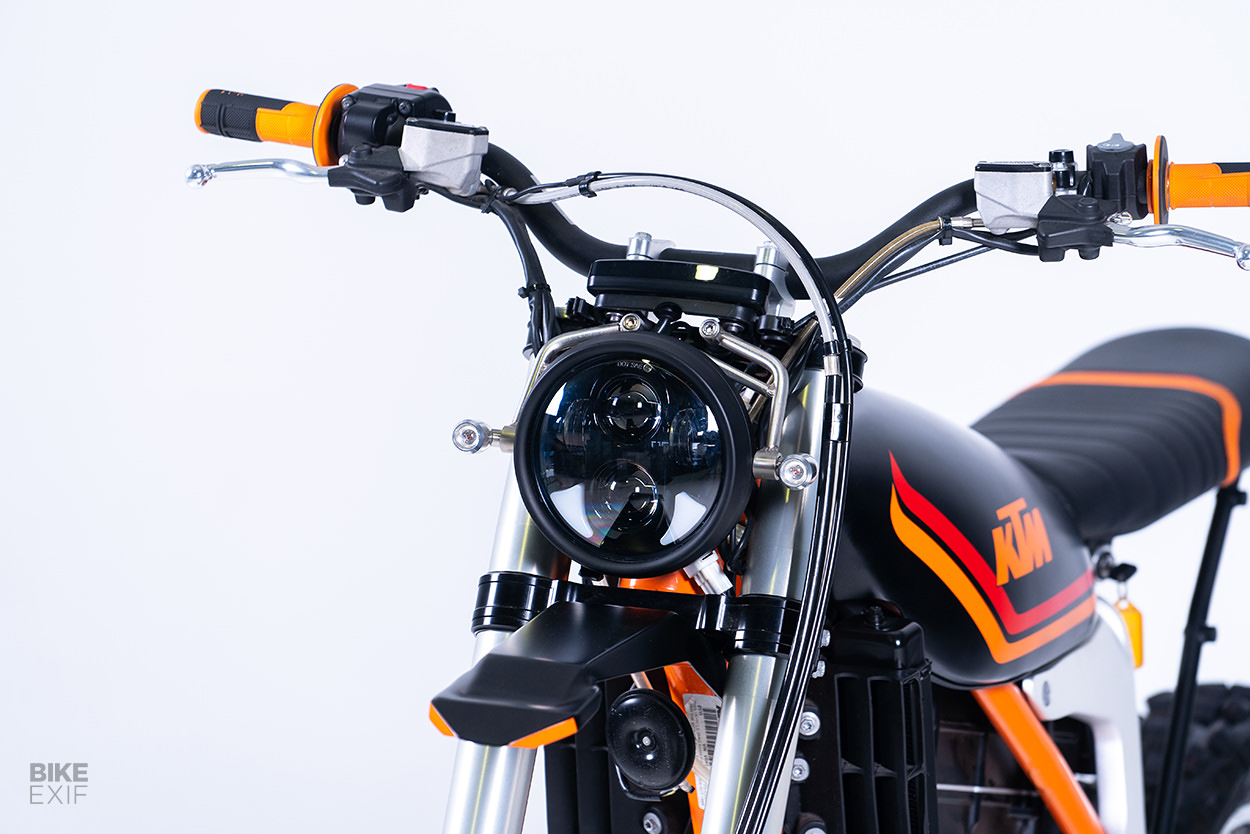 For the livery, Tom decided to accentuate the KTM’s distinctive orange chassis with a subtle black base and color-matched highlights. The seat was trimmed to match, using a modern gripper fabric.

“The KTM is bucketloads of fun,” reports Tom. “It’s super light, handles well and while the top speed isn’t anything wild, it makes getting there a lot of fun.” 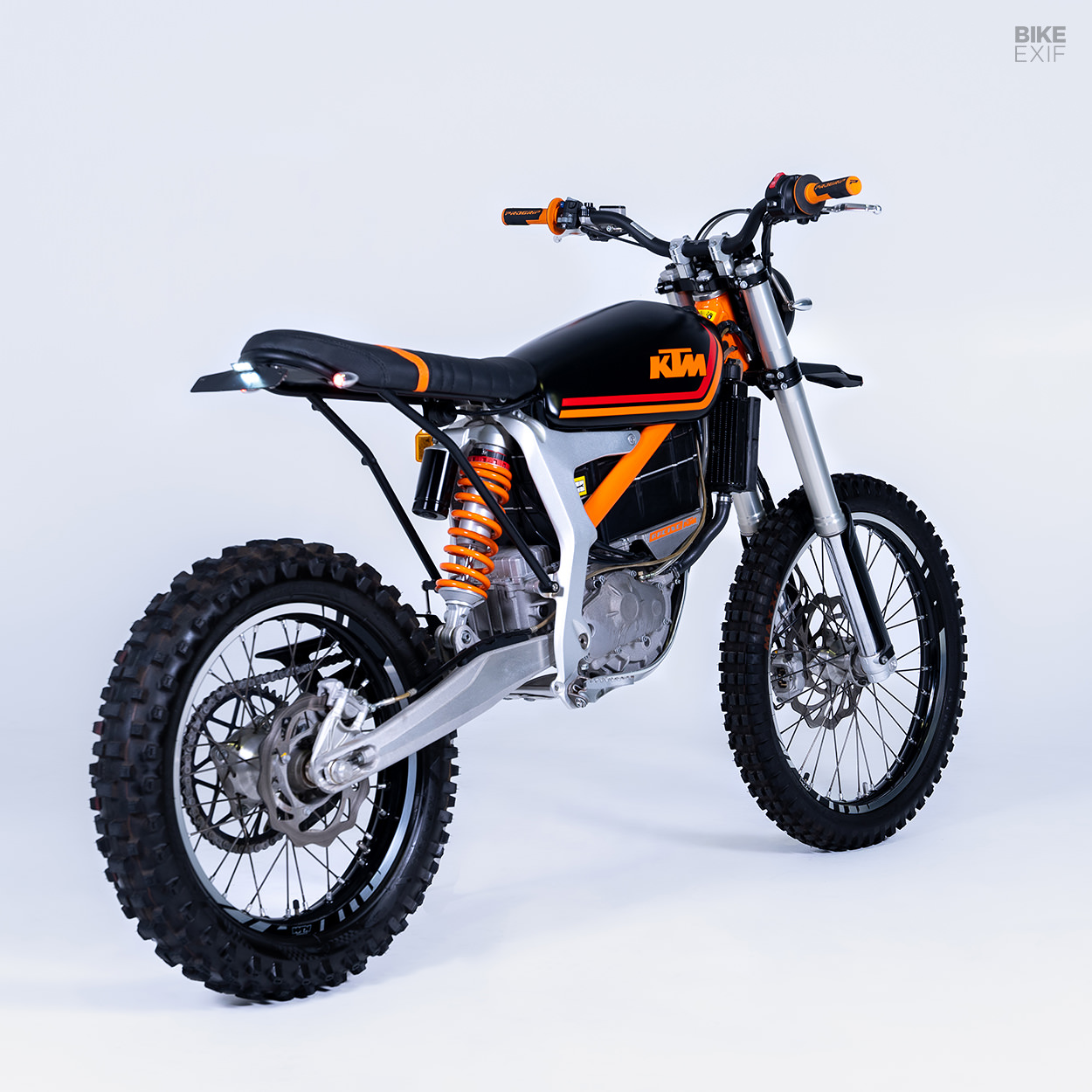 Grid Cycles’ classic twist on the modern KTM has done wonders for its aesthetic appeal too. They’ve taken it from garden-variety plastic motocrosser to retro scrambler, adding a touch of class to its inherently fun nature. We’d say they’ve kicked things off well. 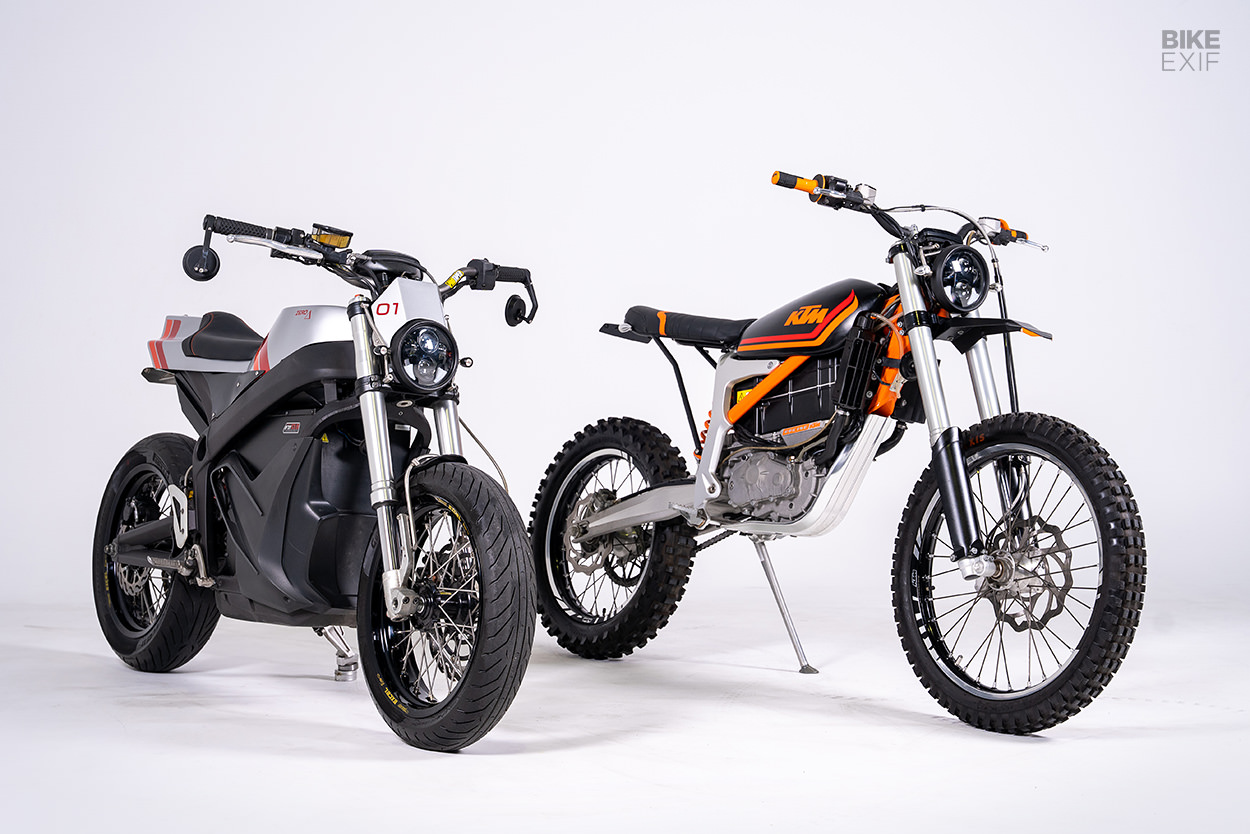