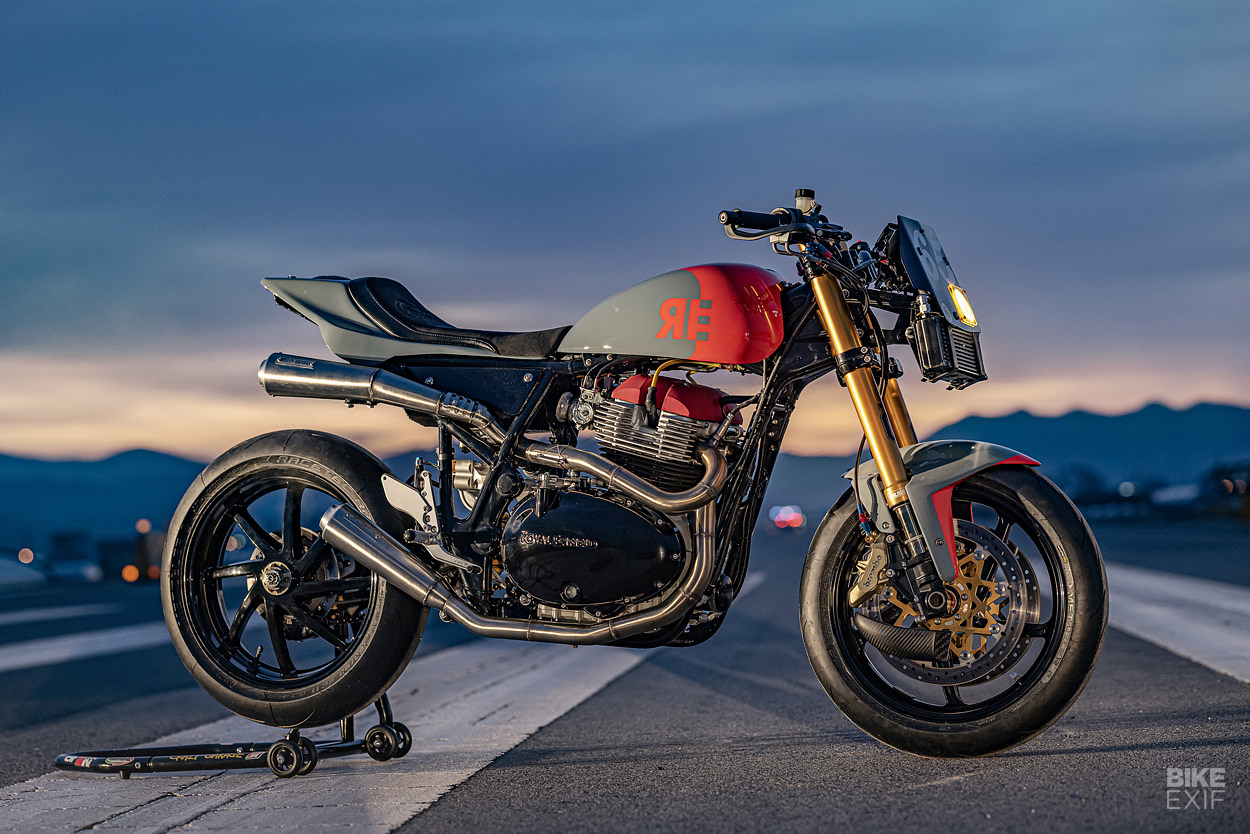 Royal Enfield is booming at the moment, with rising sales, multiple model refreshes and the new Meteor launch. But the Chennai manufacturer hasn’t taken its eye off the custom ball: it’s just commissioned a Continental GT 650 race bike from Crazy Garage of South Korea.

The ‘GT 650 RS’ is one of the most heavily modified Enfields we’ve ever seen. The styling harks back to the glory days of AMA superbike racing in the 1980s—before fairings became de rigeur—and the hard parts have got performance upgrades to match. 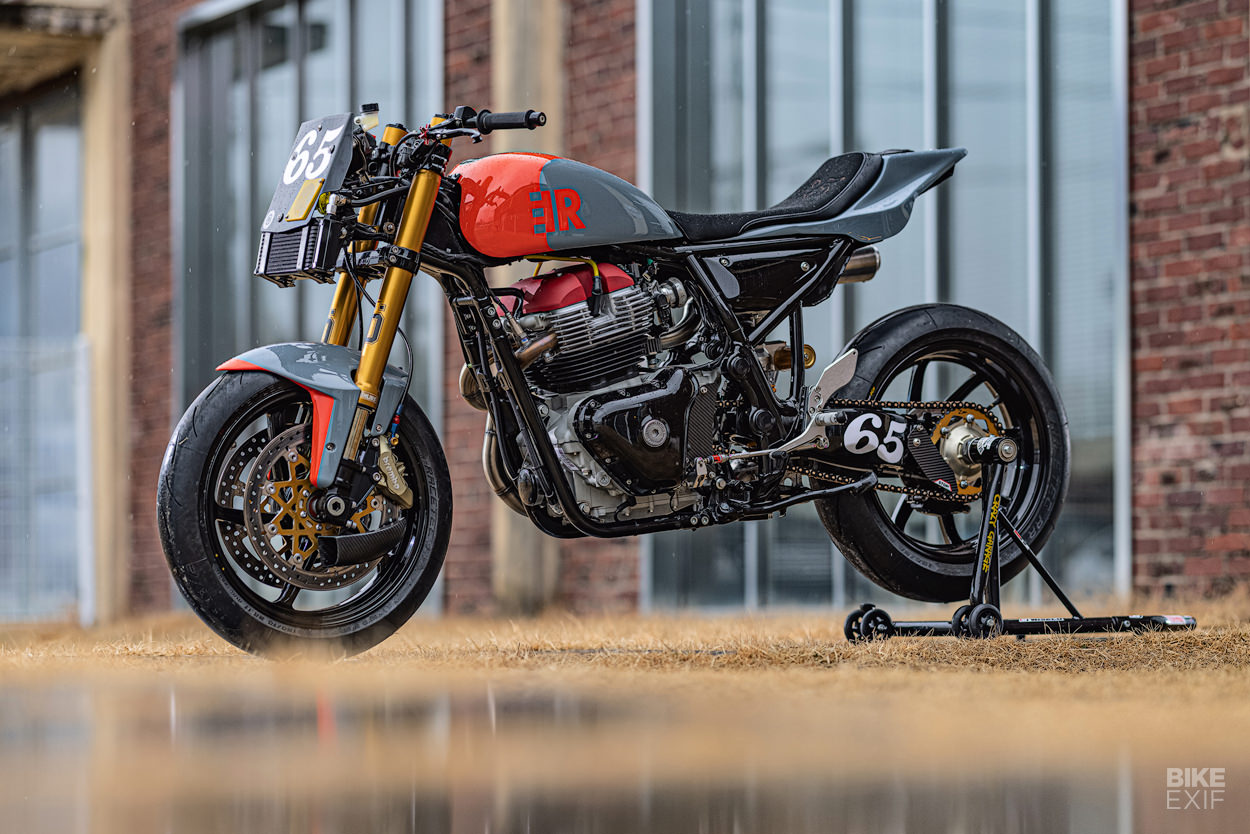 Builder Kim Chi-hyun, the founder of Crazy Garage, is renowned for his race-inspired customs, and is making a name for himself in the west too.

His skills caught the eye of Royal Enfield’s head office, who tapped him to build this GT 650. “We’ve been watching Crazy Garage for a while now,” says Aditya Malaker, who looks after Royal Enfield’s custom program. “He’d already built a GT 650 to race, but 2020 had other plans.” 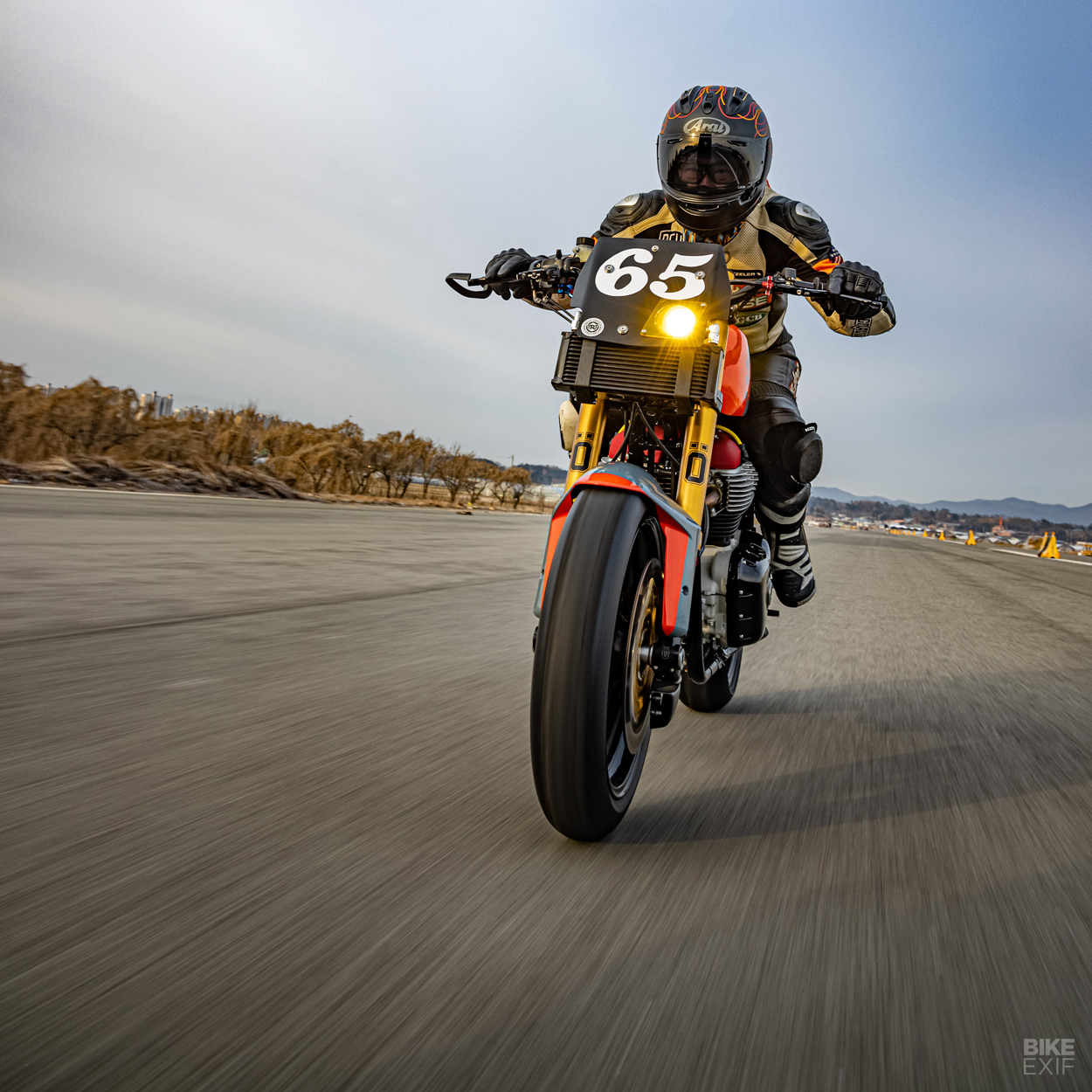 “We were looking to collaborate on a one-off build in that region, and Crazy Garage stood out. When we eventually reached out to Kim, he jumped on the opportunity and the ‘GT 650 RS’ was born. The brief was simple: build a custom motorcycle that is unique to your style, keeping the original DNA of the Continental GT, and ready to take to the track!”

Kim has absolutely nailed the brief, and the only thing wrong with this GT 650 is that we can’t take it for a spin around a test track ourselves. 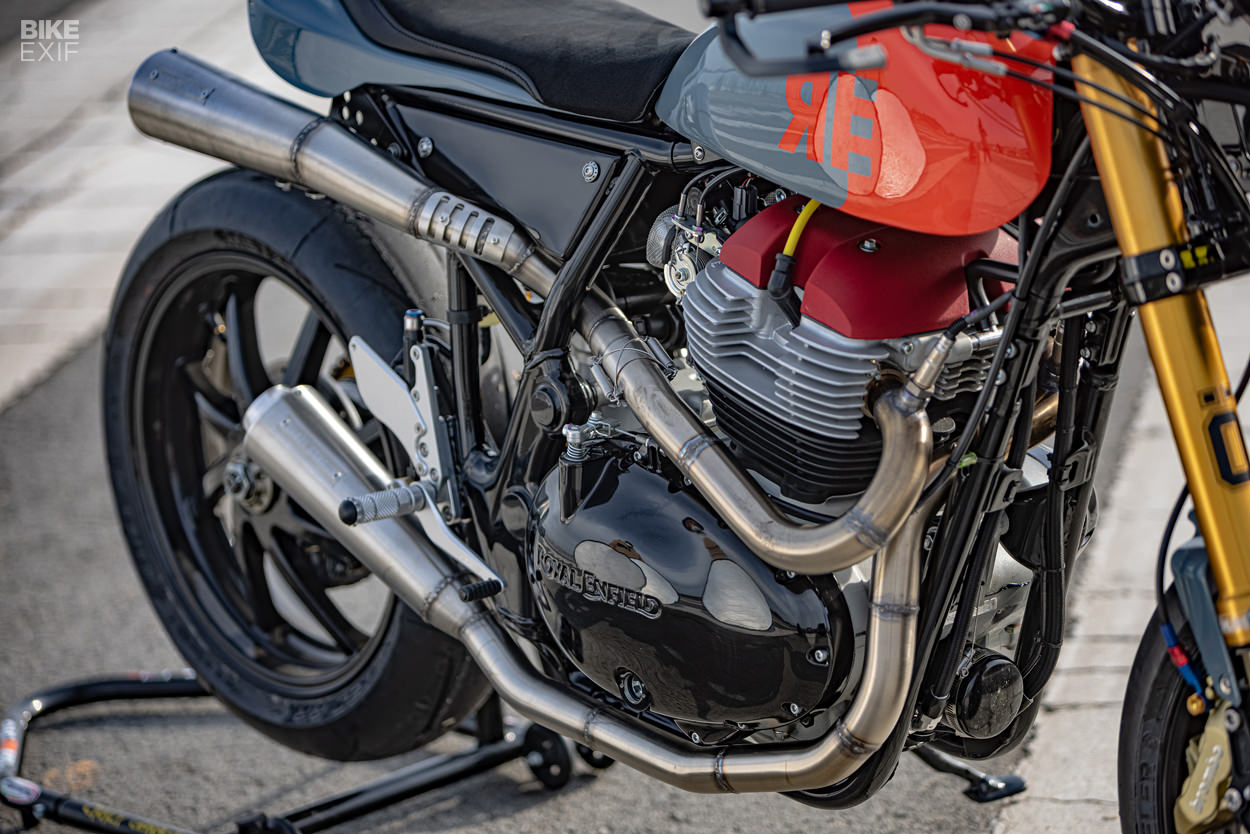 It’s hard to know where to start with the mods, because there are so many, but the core of this build is an uprated engine. It’s full of S&S Cycle parts, including high compression pistons, a hot cam, and a heavy-duty clutch. Fueling is controlled by a Dynojet Power Commander with autotune, which also compensates for the airbox removal and the custom free-flowing exhaust system.

There’s a Dynojet quickshifter too, to keep the power hitting the back wheel as much as possible. It’s combined with a quick-action throttle, and a handlebar switch that allows the rider to change the ignition map quickly and easily. 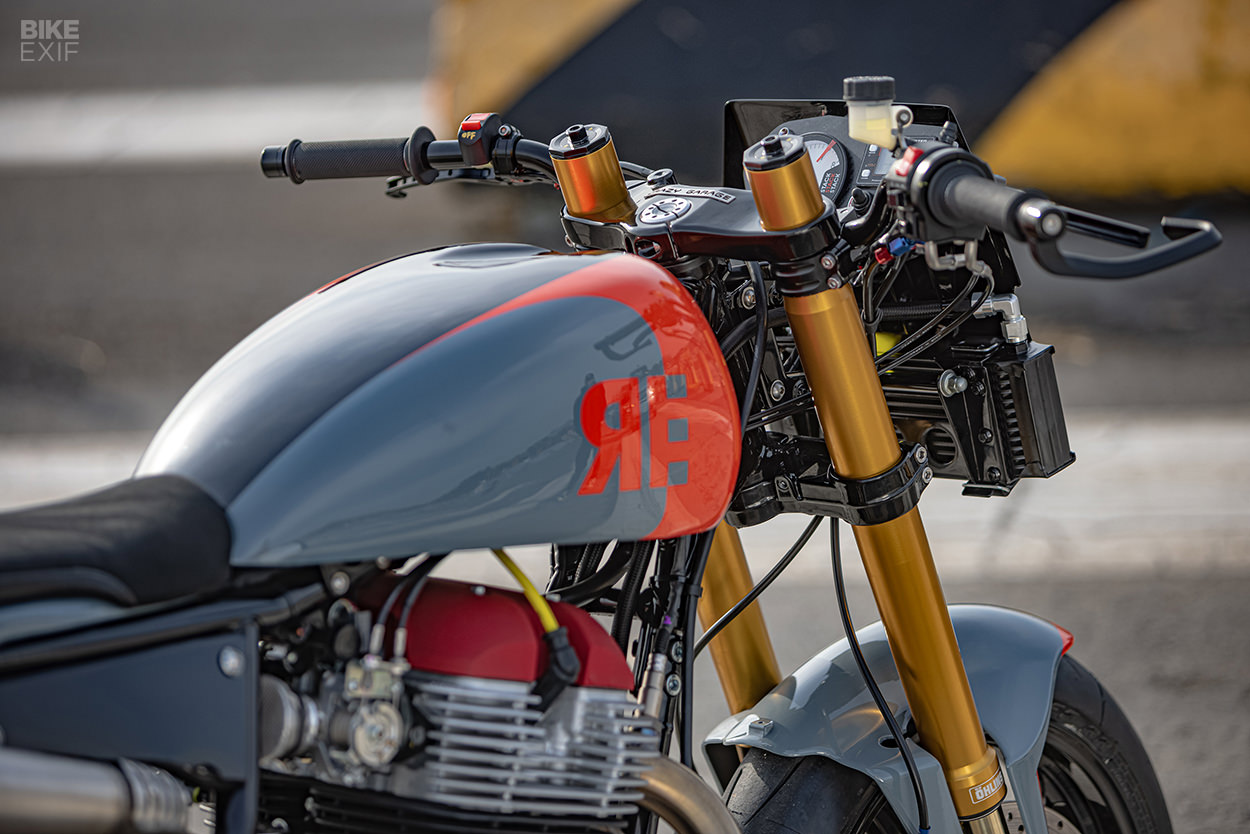 The oil cooler has been moved to the front of the bike, and plumbed in with race-spec lines. Crazy Garage have also removed the EVAP (evaporative emission canister) and pulse air valve, to keep the other plumbing to a bare minimum.

Since this is a track bike, the ABS and all extraneous electrics were removed. Braking is now handled by a complete Brembo system at the front, including an RCS master cylinder, calipers, and new rotors, all hooked up with new hoses from Swage-Line. Custom carbon ducts keep the discs cool under pressure. 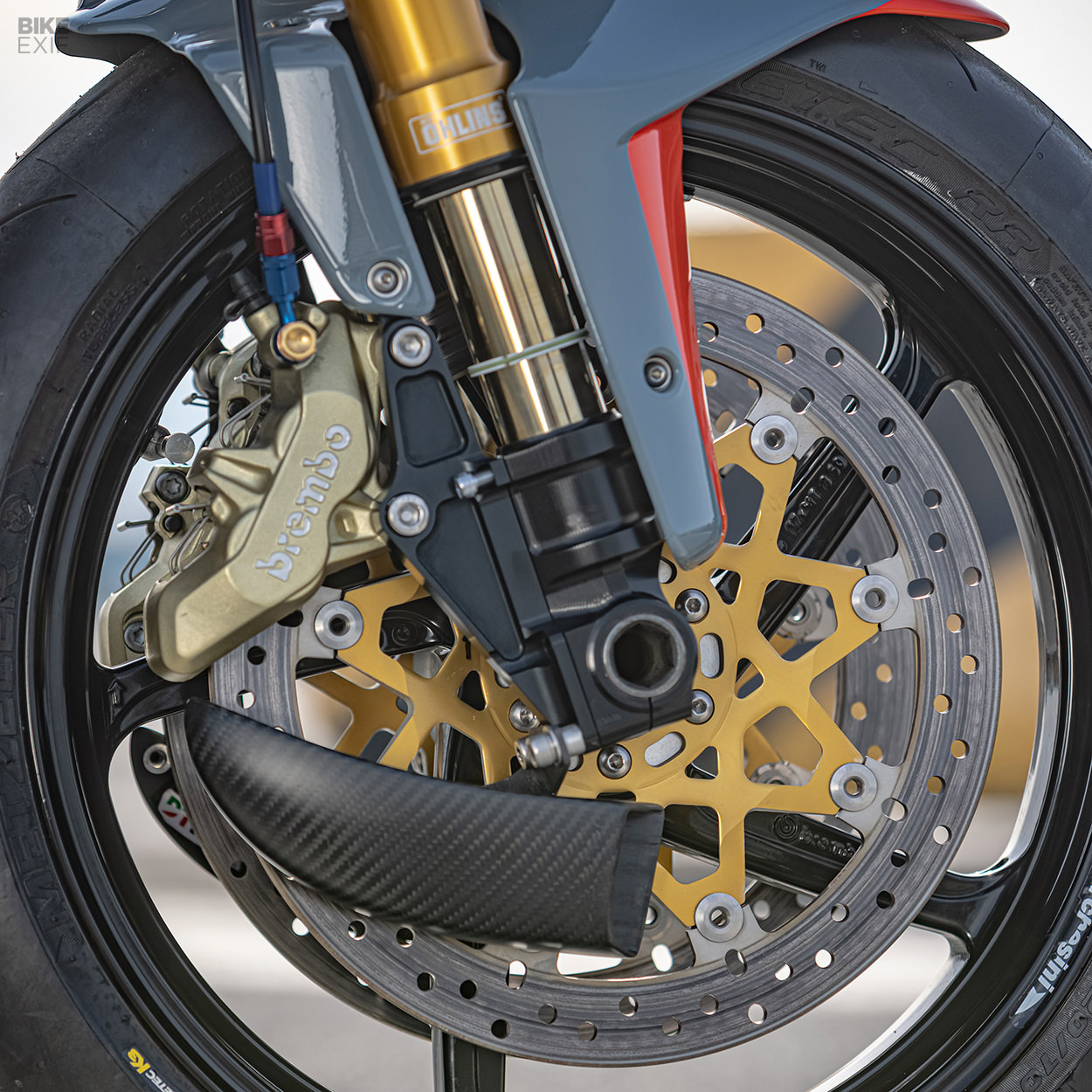 The suspension’s been upgraded to Öhlins, with a one-off set of Custom 43 USD forks and a TTX shock. That shock is now attached to a single-sided swingarm, liberated from a 90s Honda VFR400R (NC30). 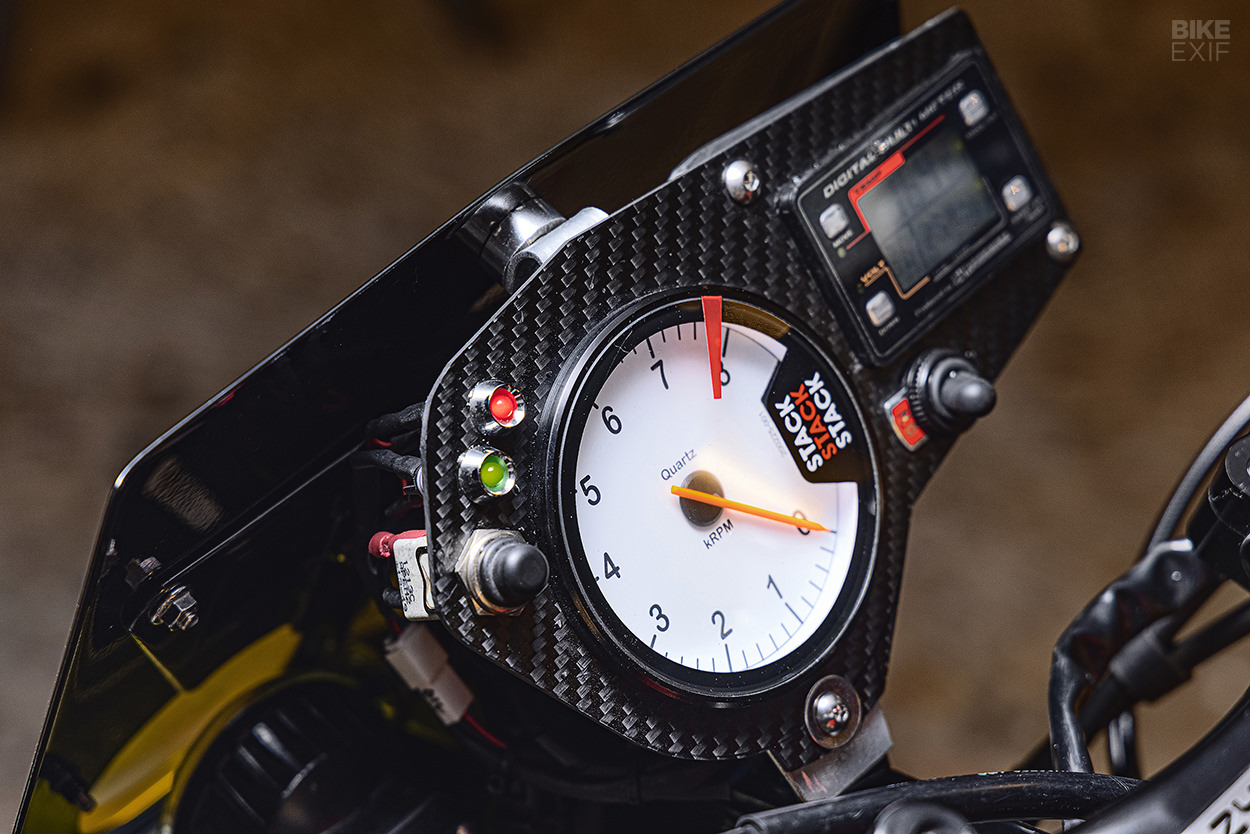 One of the most significant mods is well hidden, though. The nine-liter fuel tank is now under the seat and the visible ‘tank’ is a custom piece made from thin-gauge steel. It’s matched to a new fiber-reinforced plastic tail section, which Kim bought off-the-shelf and then narrowed to match, before fitting it to the modified rear frame. 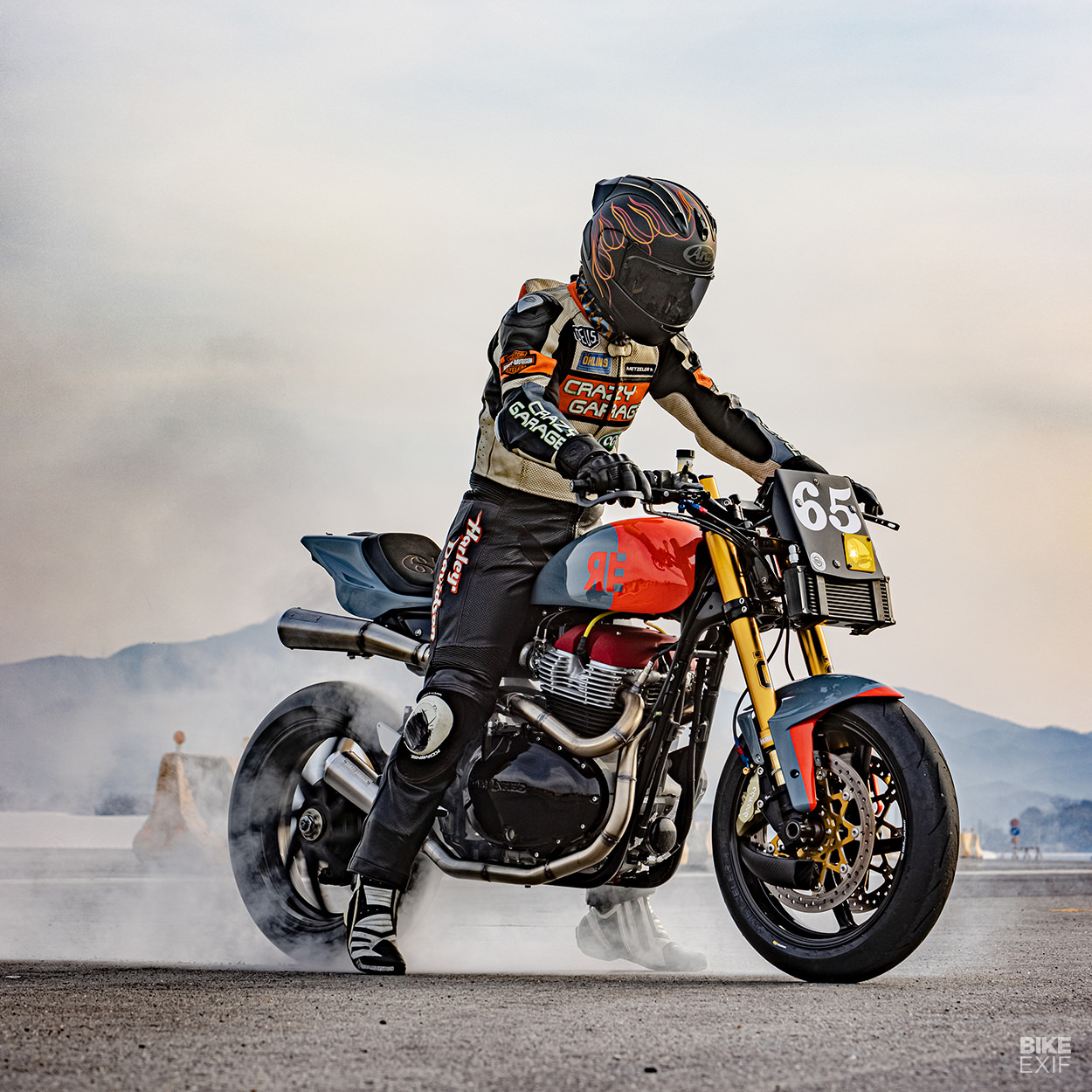 After a full refinish with a mix of powdercoat and conventional paint, the GT 650 is now ready to hit the circuit in anger. Kim is quietly confident of success—and who are we to disagree?