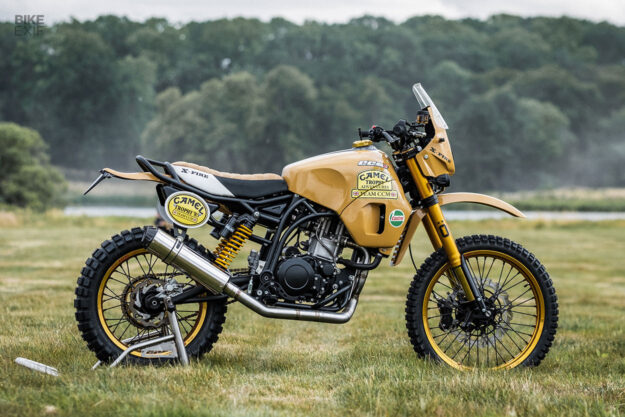 If there was an award for tenacity in the motorcycling world, the British company CCM would win it. They’ve been going since 1971, when Alan Clews fired up Clews Competition Machines in Lancashire. And today’s road-going Spitfire model is something of a cult success, powered by a feisty 62 hp 601 cc single based on a Husqvarna design.

CCM brought this ADV bike concept to the Malle Mile, and it attracted a lot of attention. With sandy yellow paint worthy of a Camel Trophy Land Rover, it looks like nothing else in the CCM line-up. And the company wants to know if you think they should put it into production. 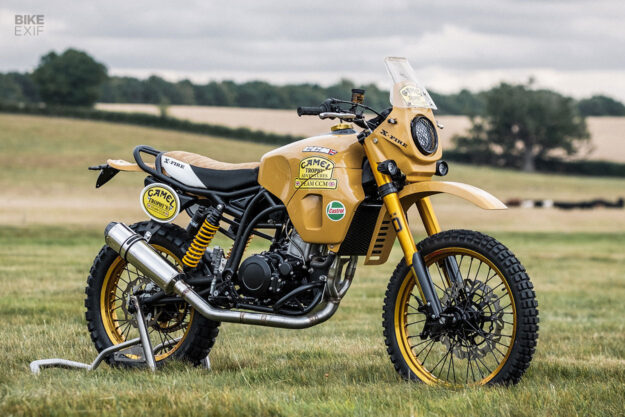 “It’s a bit of a melting pot concept,” says Scott Lanzi, CCM’s product director. “Our lead designer, Owen, wanted to do something radically different with the Spitfire platform, based around our scrambling twin-shock heritage.”

“At the same time, we wanted to investigate longer suspension travel, and were curious to see how far we could credibly go.” 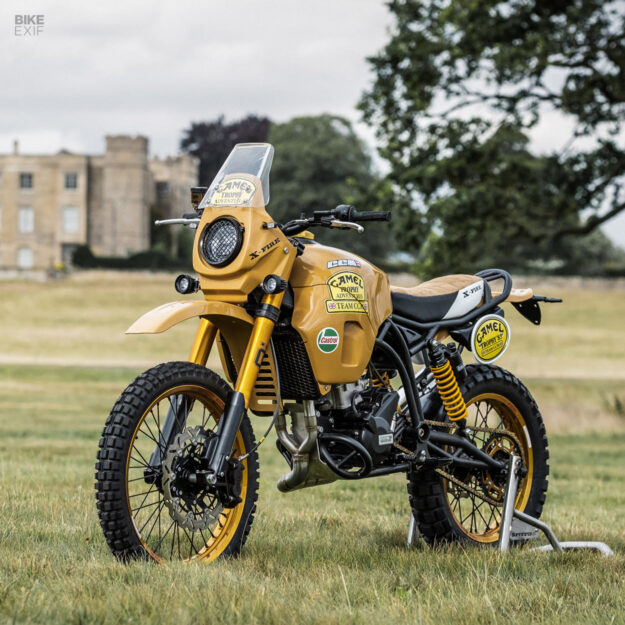 Despite only having 130 mm (5.1 inches) of travel, CCM’s current Maverick scrambler is quite capable off-road. It’s won grass track events at the Malle Mile, and since it weighs a mere 145 kg, it’s perfect for what Brits call ‘green laning.’

But there’s always room for something more hardcore. “Lots of our customers also own heavier, touring-focused adventure bikes,” Scott tells us. “They’ve been asking us to revisit our previous GP450 model and develop another lightweight single.” 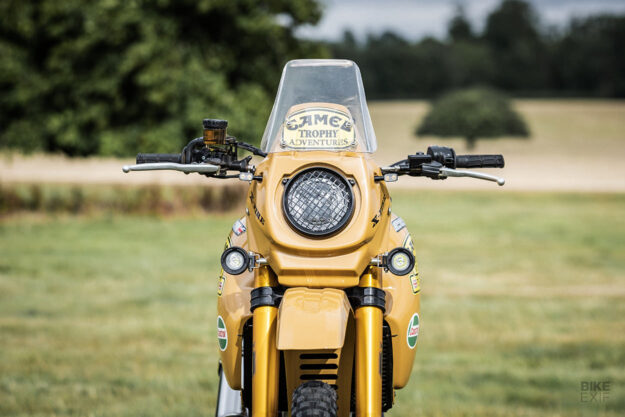 That was enough to get the Bolton-based brains trust thinking. “Most of our current design and development team ride or race motocross or enduro. And I think one of the CCM advisors still has a poster of Gaston Rahier on his bedroom wall!”

This prototype is not a half-hearted styling exercise: very little componentry is carried over from the current range, aside from the front of the frame and the engine. Designer Owen likes to get his hands on the power tools, so he fabbed up most of the prototype himself, in CCM’s workshop. 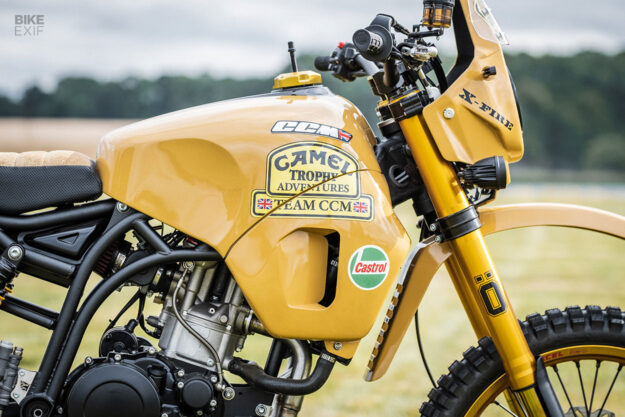 The beefy tank is one of the visual highlights, but Scott reveals that it was a very last-minute design. “It was sketched quite literally on a piece of scrap paper, then surfaced and milled from foam on a timber substrate,” he says. “If we go forward with this concept, the tank will need some detail work—but the 20-liter fuel capacity will remain.” 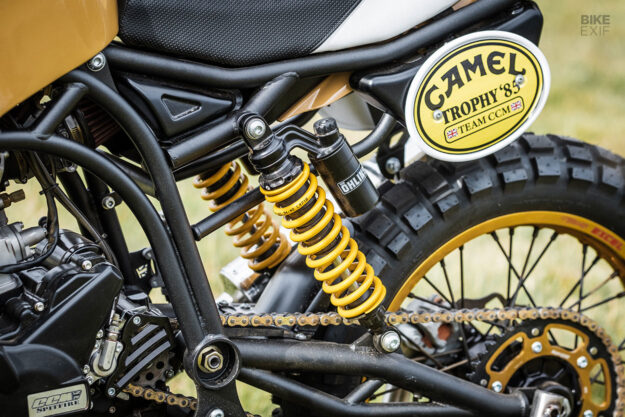 The rest of the bodywork was designed from scratch and 3D printed. “All Owen’s work, really,” says Scott. “We took our design cues from historical Dakar bikes and adapted them to create a little neo-retro look.”

Mechanically, the bike is fitted out with Öhlins suspension front and back, with bespoke triple trees and rims from the Dutch specialist Haan Wheels. There are CNC-machined parts throughout, plus a few modern twists like multi-functional LED lighting. 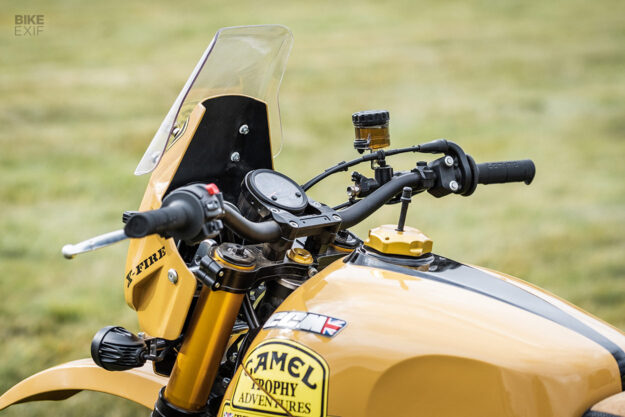 CCM are keeping a close eye on weight targets too, aiming for a dry weight of 135 kg [297 pounds]. The projected 50 rear wheel horsepower should shift that along nicely. 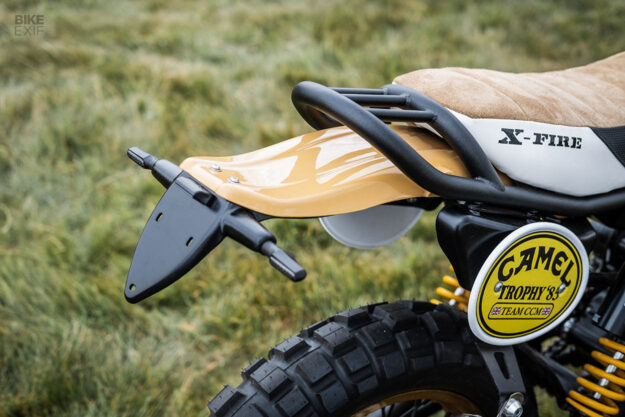 “That’s the million-dollar question!” says Scott. “If we build it, will they come?”

“As a concept, it’s been well received. That’s often the case though—after initial high levels of acceptance, when you eventually reach the market, you’ve missed the boat. Or find that a product is too niche to sustain a motorcycle manufacturing business, albeit low volume.” 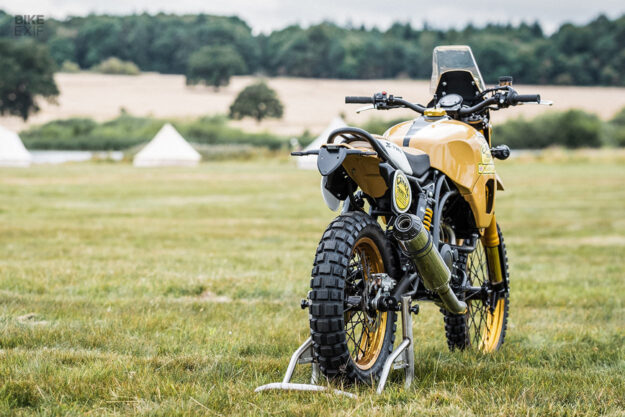 CCM will decide whether to build this bike by the end of this year. Do you think they should? Fire off in the comments below or flick an email to spitfire@ccm-motorcycles.net. 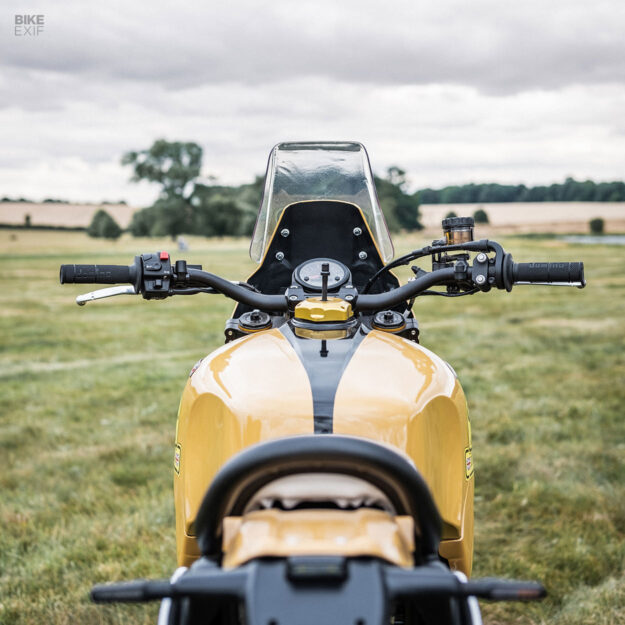