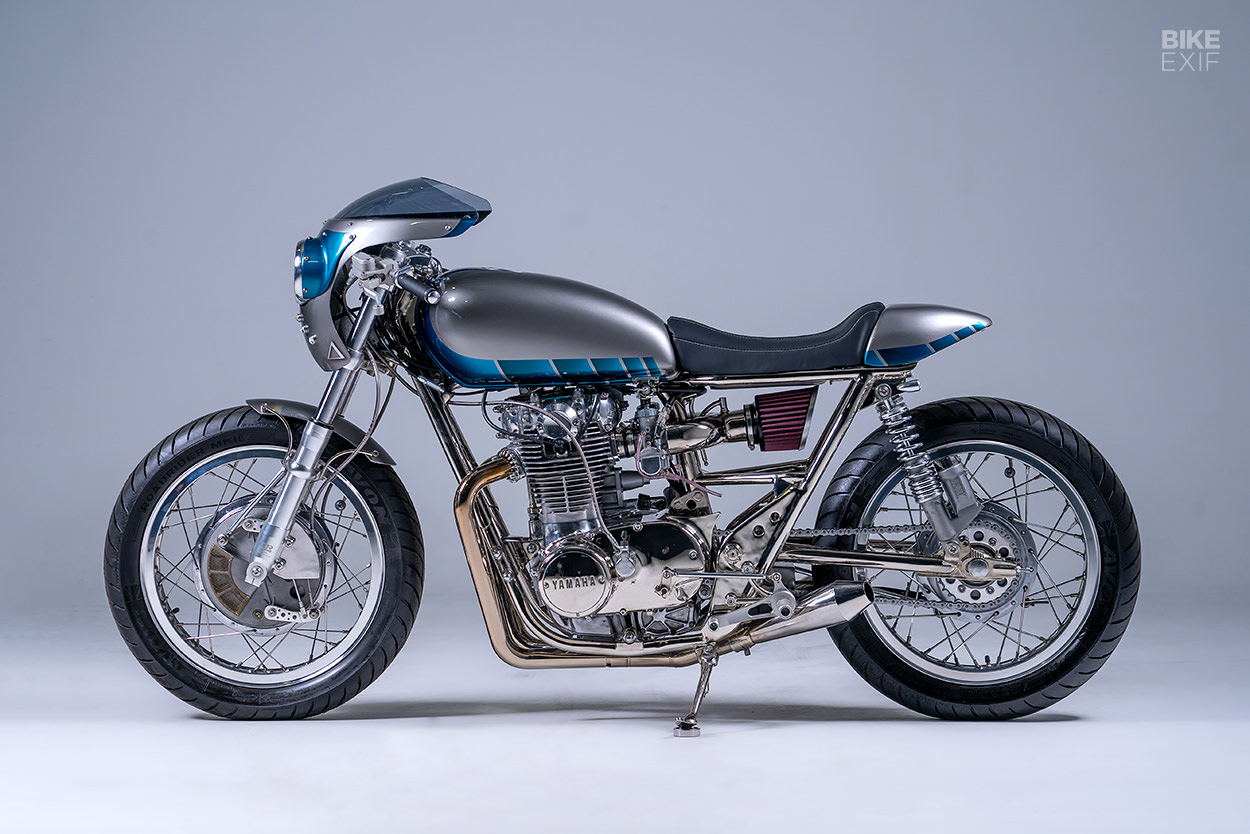 Like many shops, Purpose Built Moto does a lot to put food on the table. On top of their regular custom bike builds they also fabricate exhausts, do wiring work and produce bolt-on parts. But when the right client and budget come along, the Australian crew loves to pull out the stops.

Purpose Built Moto calls these projects their ‘Signature Series,’ using each one as an opportunity to push their own boundaries. This delightful Yamaha XS650 café racer is their latest Signature Series project. It’s a masterful combo of classic looks and modern performance, with a sprinkling of top-tier parts for good measure. 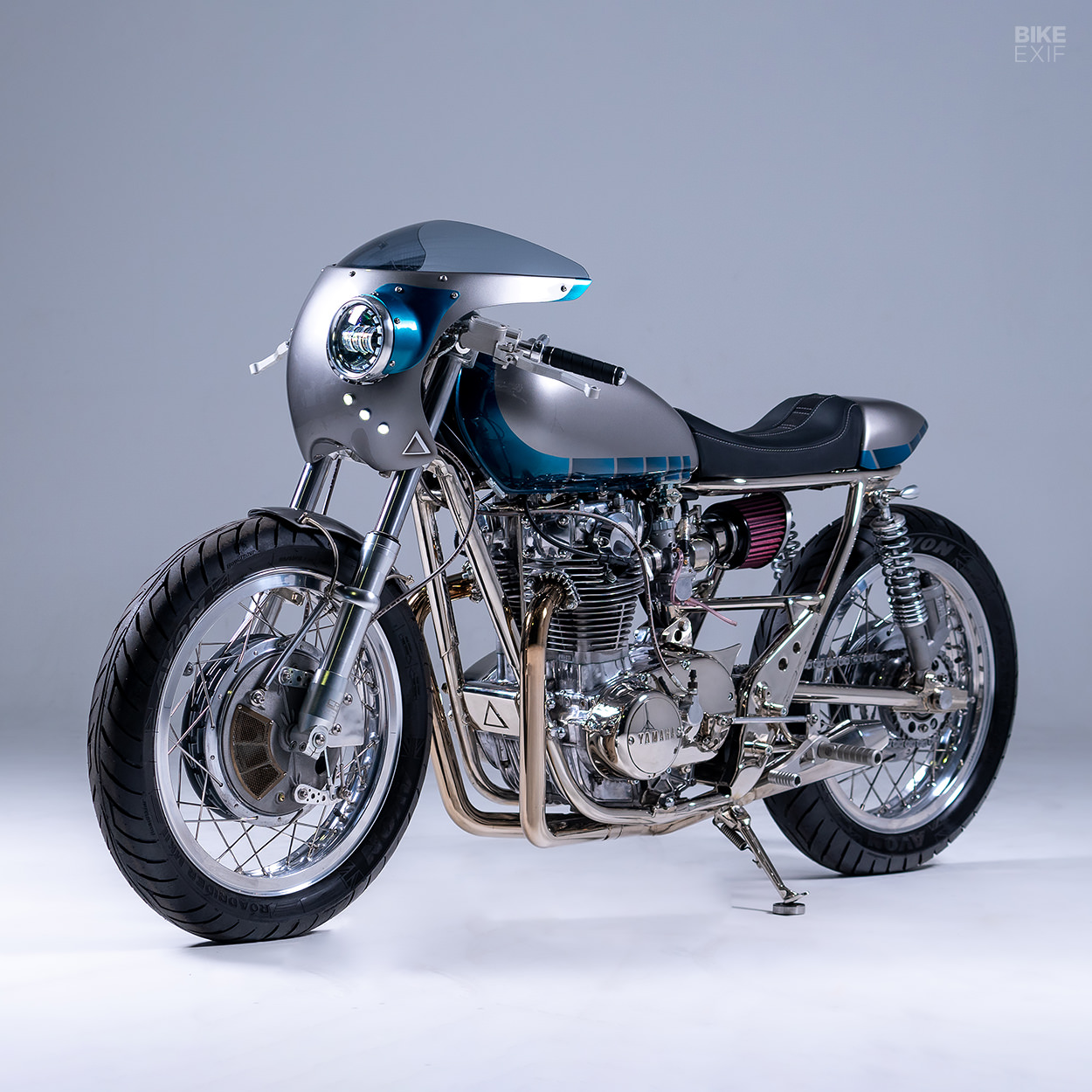 The 1973-model XS650 has some history too. It had been raced in the 70s and owned by the client’s grandfather, who regaled his grandkids with tales of how he thrashed people all over the streets of Melbourne on it. It changed hands a few times over the years—but PBM’s client thankfully managed to track it down.

He wheeled the Yamaha into PBM’s Gold Coast workshop with a loose brief. “He wanted an object of beauty that would create a desire to ride,” explains shop boss, Tom Gilroy. “When this motorcycle wouldn’t be on display, it would be ridden on the road and taken to the odd track day.” 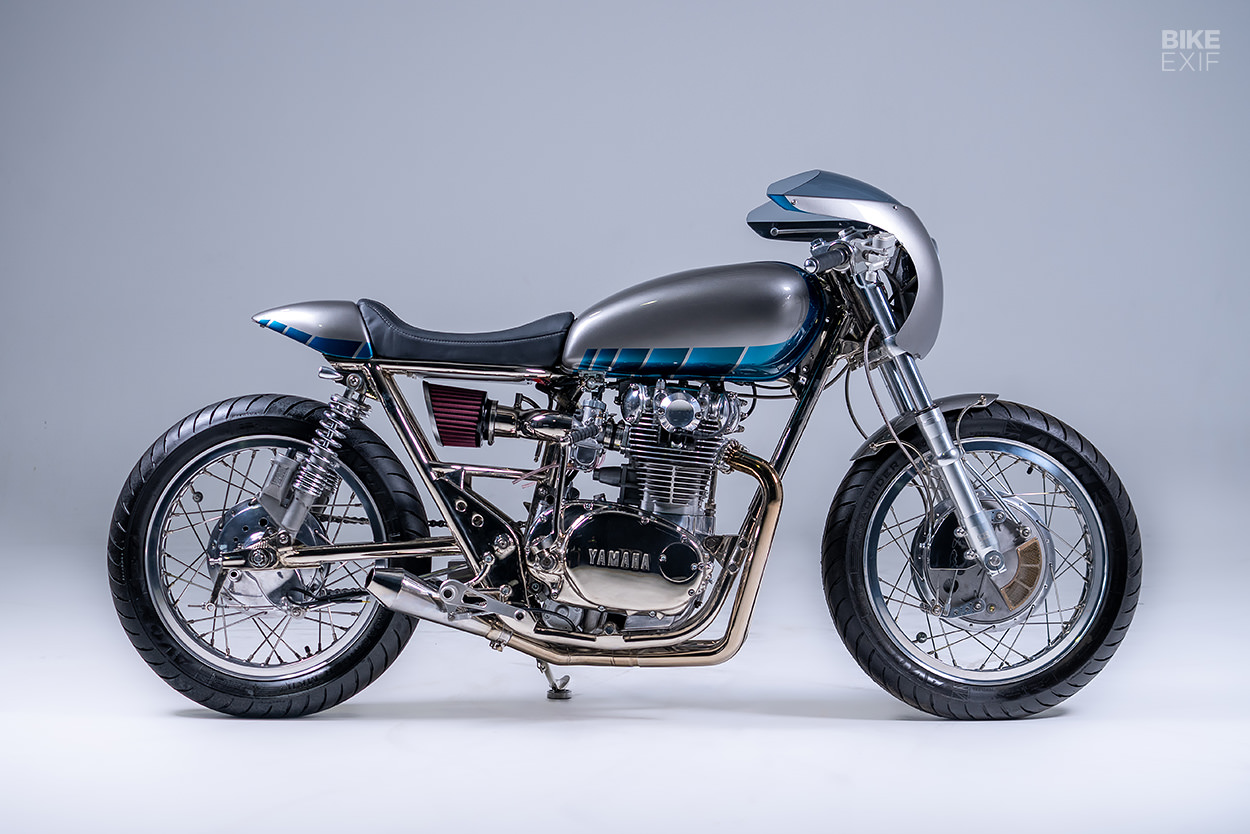 Most of PBM’s Signature Series builds have had a modern edge to them, but Tom relished the opportunity to build something with a vintage bend.

“I worked at creating a timeless piece that would feel at home for any rider, young or old,” he explains. “Something that people across a family’s generations could be enamored with.” 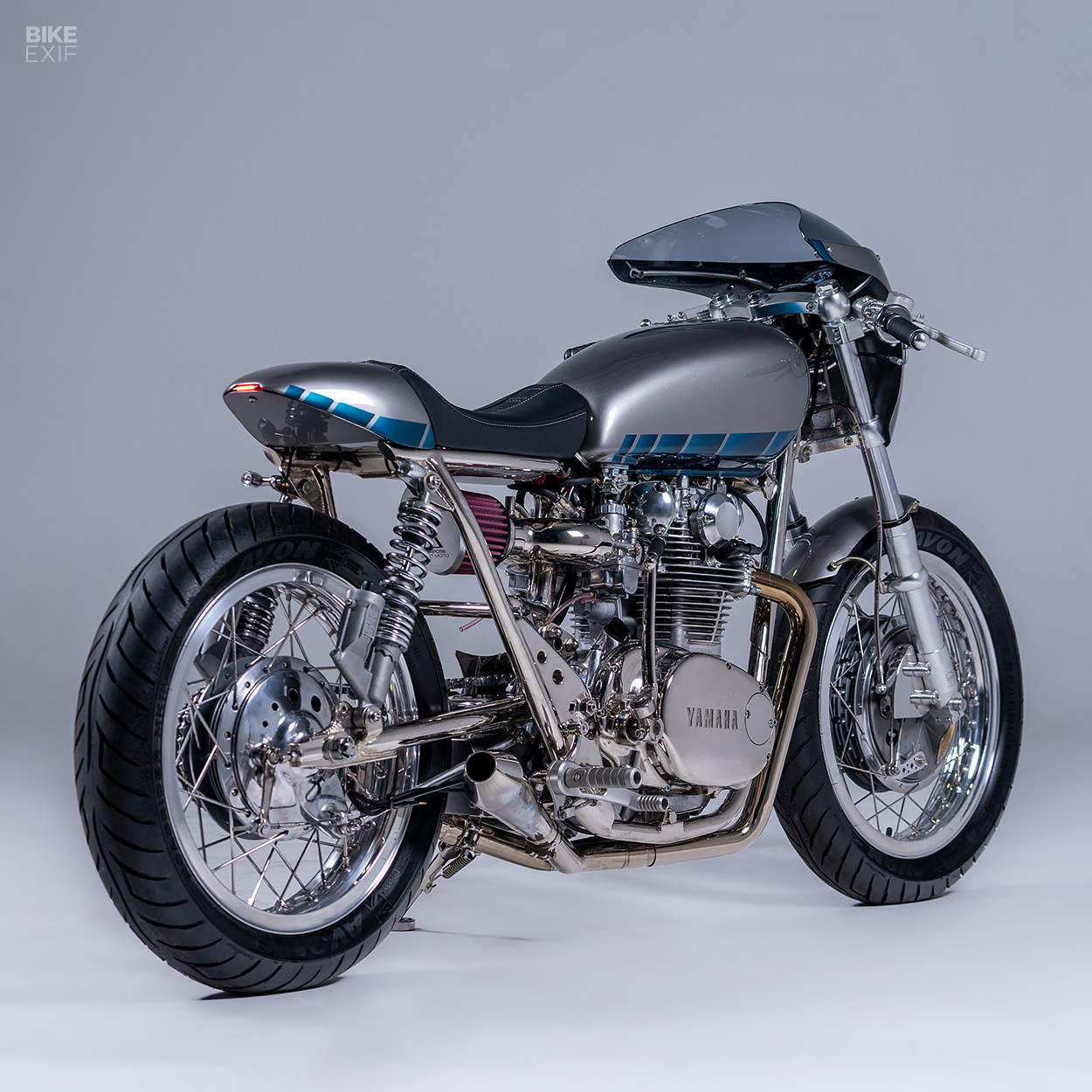 The build started with the suspension and wheels. The XS650 hadn’t seen a track in quite some time—but it still wore the classic Marzocchi piggyback shocks it had raced with back in the day. So PBM stripped, blasted, cleaned, rebuilt and tweaked those to perform a little more like modern units. 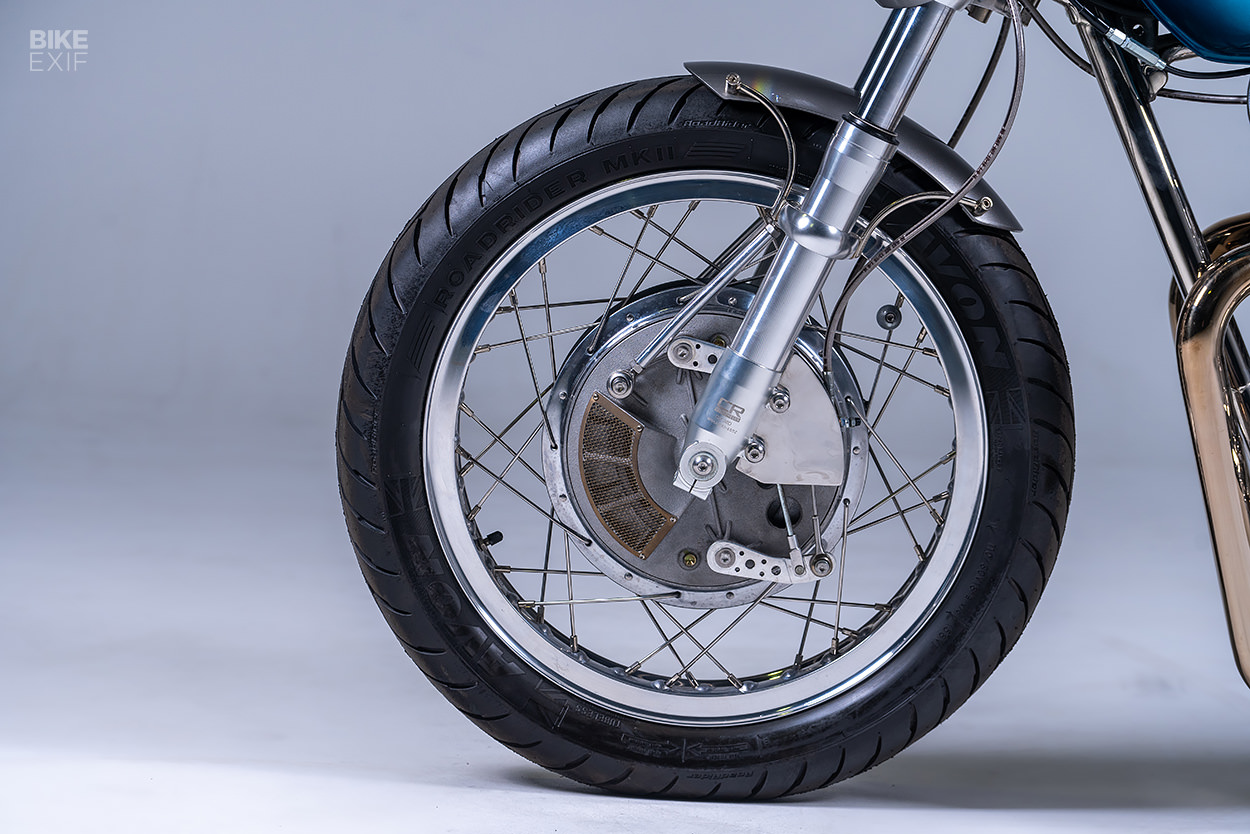 And that’s where things got interesting. “In the past, I’ve been left underwhelmed by the performance of cable operated drum brakes,” says Tom. “To address this, I wanted to build a hydraulic drum setup, but keep the traditional look of the Robinson drum.”

Through some trick fabrication work, Tom made a pair of guard plates that bolt to the Ceriani forks’ disc brake caliper mounts. Then he hid the hydraulic actuators for his custom hybrid system behind them. 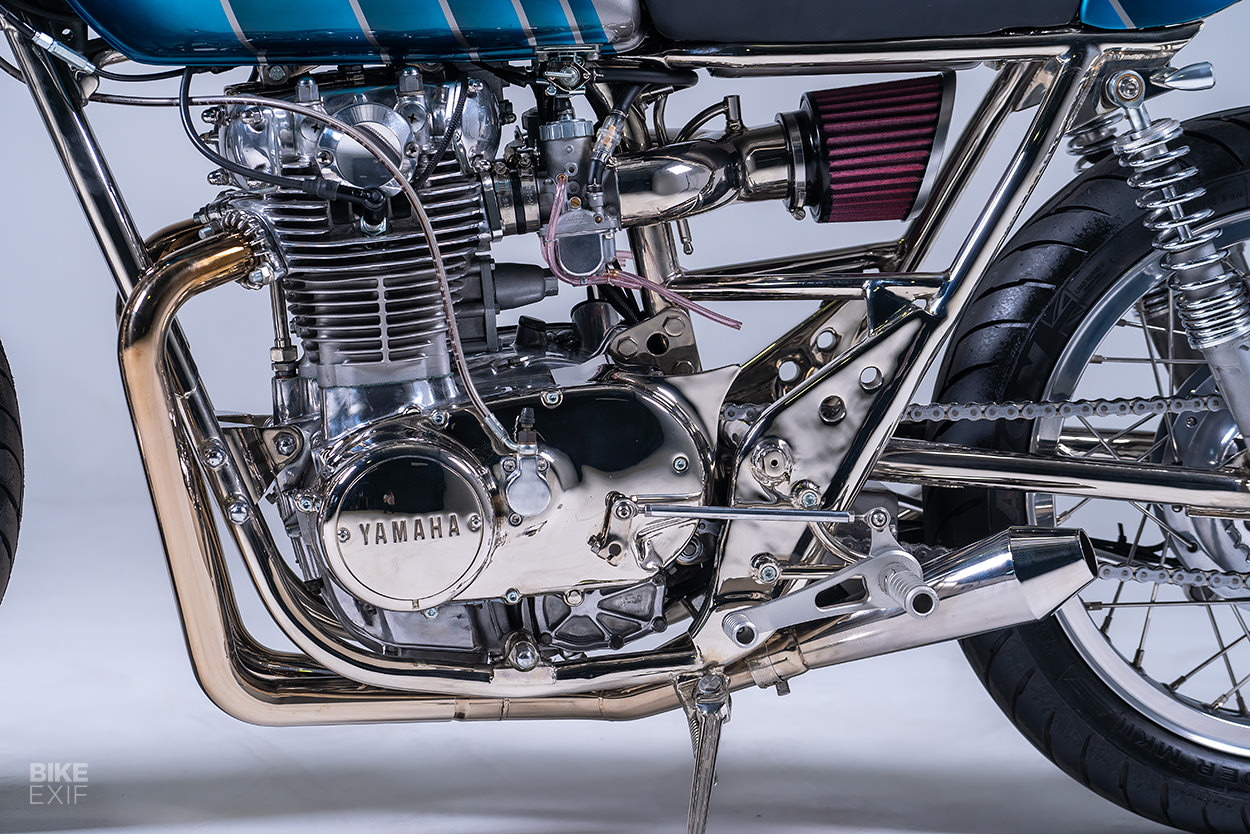 Next, PBM turned their attention to the motor. The XS650 was treated to a full rebuild with a 700 cc Hoos Racing kit, a ported head, upgraded cams, and nickel plating on the outside. It also now has a hydraulic clutch, thanks to a conversion that uses a Ducati GT1000 slave cylinder.

The motor inhales via a pair of Mikuni VM34 carbs and a custom two-into-one intake. PBM fabricated the actual intake manifold, while the father and son team of Dino and Marios Nikolaidis at DNA Filters in Greece built a custom pod filter for it. Dynomite Moto tuned the system, and the XS650 now makes 52 hp at the wheel. 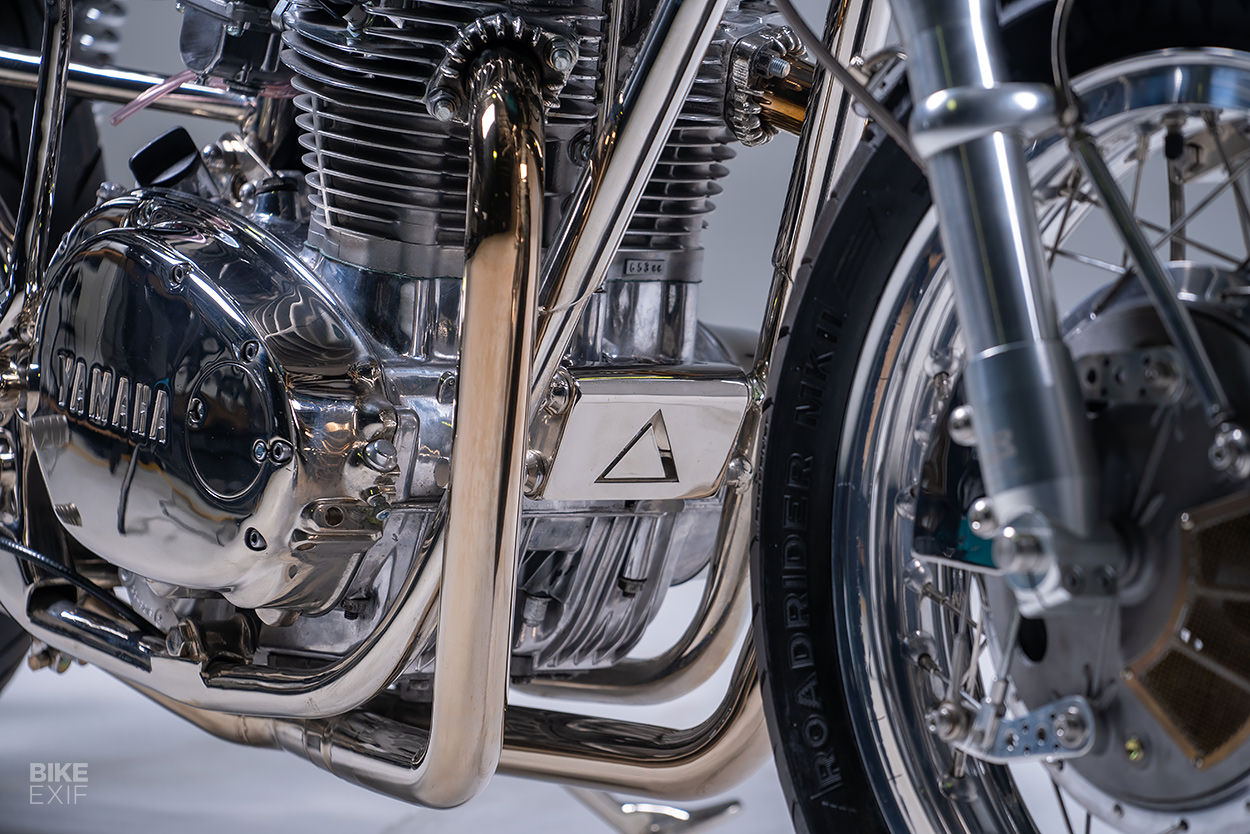 The intake’s complemented by a custom two-into-one-into-two stainless steel exhaust system, topped off with a pair of PBM’s own torpedo mufflers. “All polished to perfection,” says Tom, “before getting a clean and heat cycle, to ensure a nice straw gold color.”

The wiring was redone too, complete with updated ignition and charging systems, a Lithium-ion battery and PBM’s own ‘Black Box’ controller. 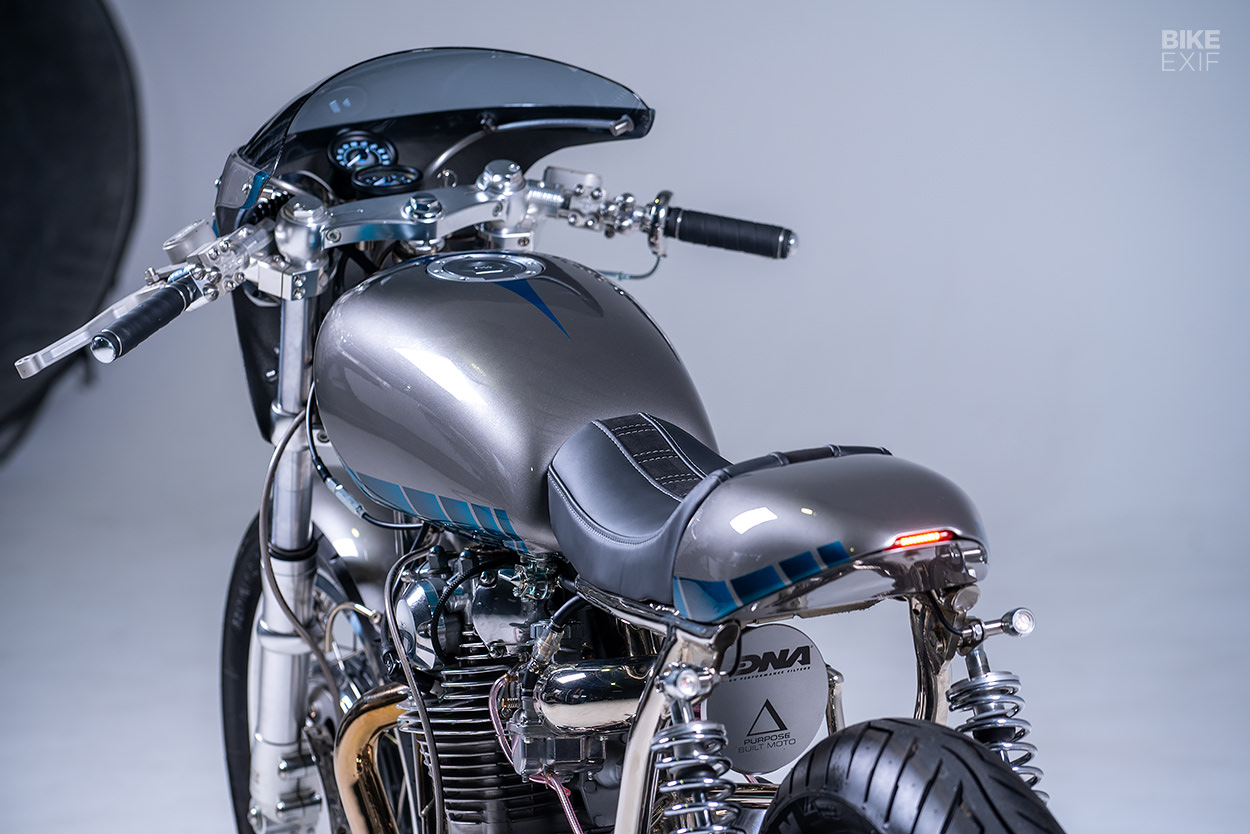 As for the bodywork, Tom opted to keep things simple and elegant. The stock tank fit the bill, and already had a flip-up filler cap fitted, so that stayed. Behind it is a classic handmade café racer tail section.

Tom wanted to avoid the typical rear tail loop, so the subframe was shortened and braced internally instead, with hidden tabs to mount the tailpiece. 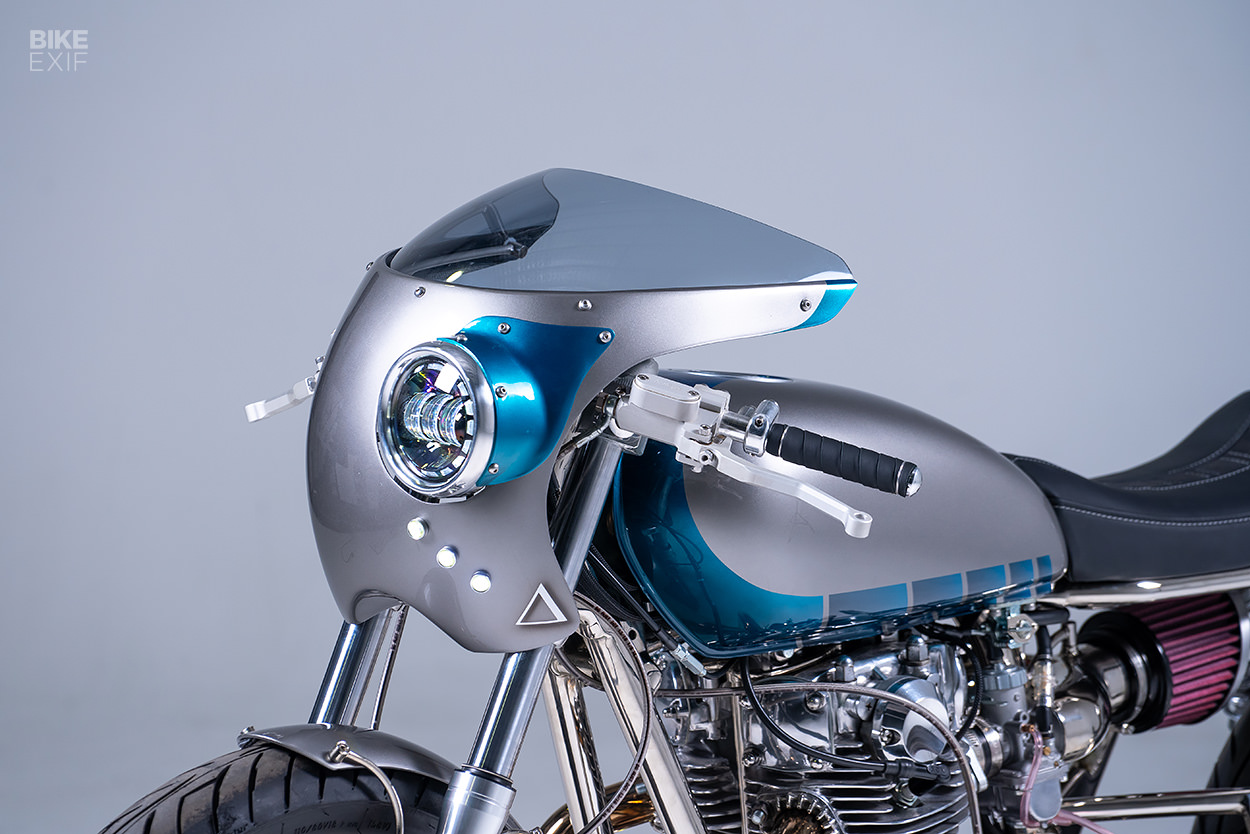 The rest of the frame was de-tabbed and cleaned up, before being nickel plated. Keen eyes will also spot some cut-outs around the swingarm pivot point.

The bikini fairing that’s mounted up front is a custom piece too. It houses a 4.5” light from PBM’s own store, with three tiny LED running lights trailing off underneath it. Behind it is a set of stacked Daytona Velona gauges. 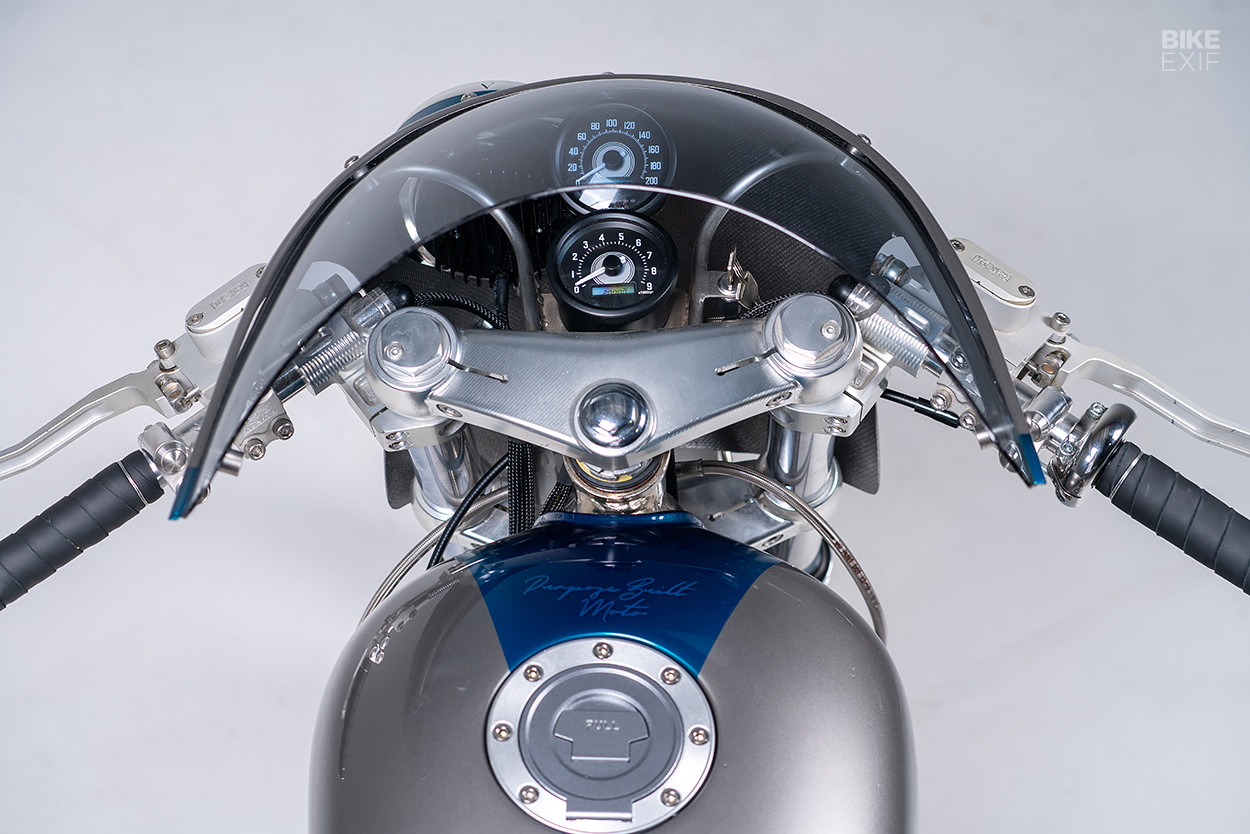 Other changes in the cockpit include clip-on handlebars, a Domino throttle, ISR master cylinders, wrapped grips and PBM micro switches. Lower down are mid-set foot pegs on custom brackets, with handmade cables and linkages. There’s also a removable license plate holder out back.

With so many polished and nickel plated surfaces, Tom wanted the paint to complement, rather than dominate, the build. Working with Nathan from Livin’ Loco, PBM settled on a silver base, with a teal blue riff on Yamaha’s traditional speed blocks. 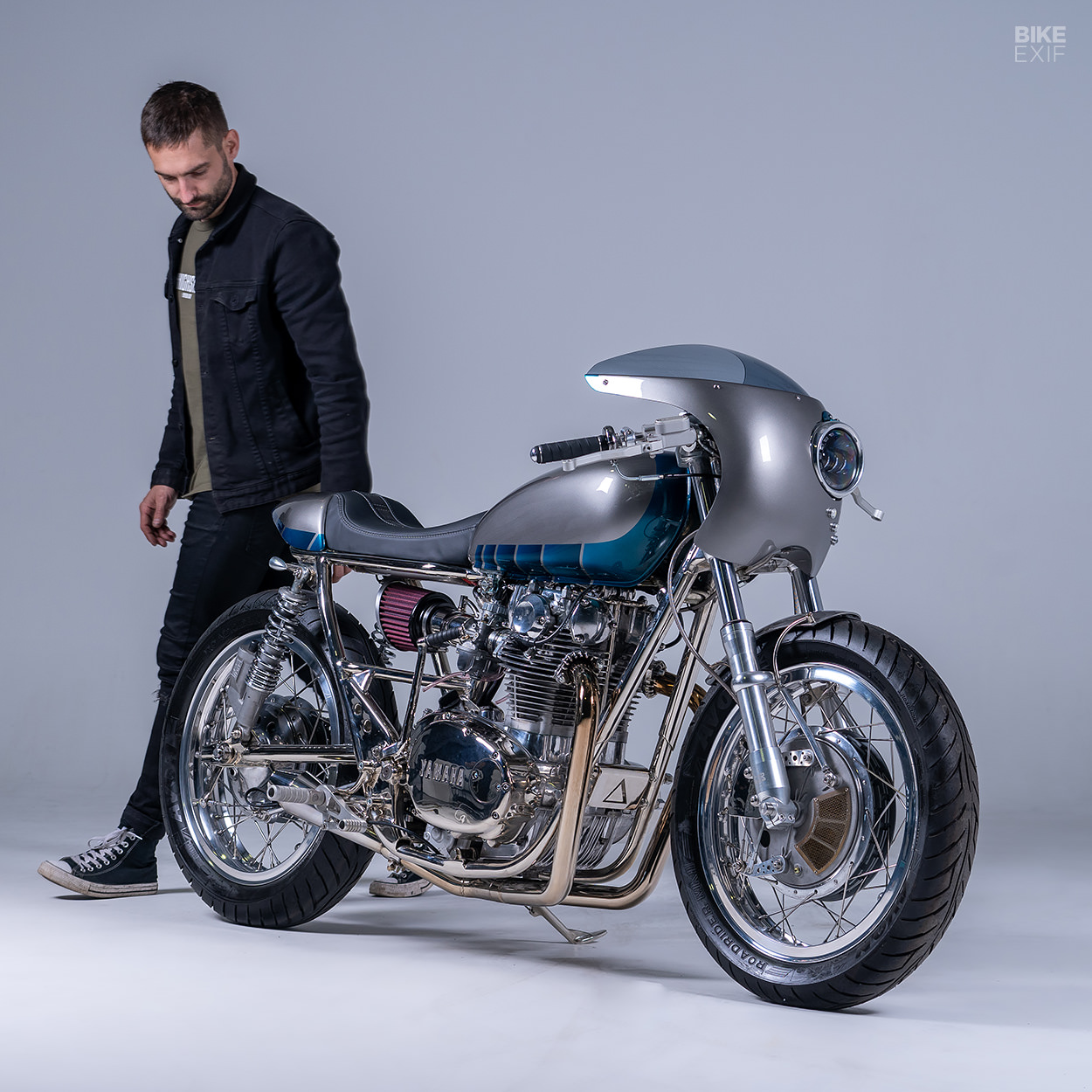 “This XS650 café racer really stirred something up inside me during the build process,” says Tom. “I feel like we’ve walked new ground as a custom shop here, and I’m really keen to explore this side of things more.”

It’s stirring something up inside us as well, Tom. 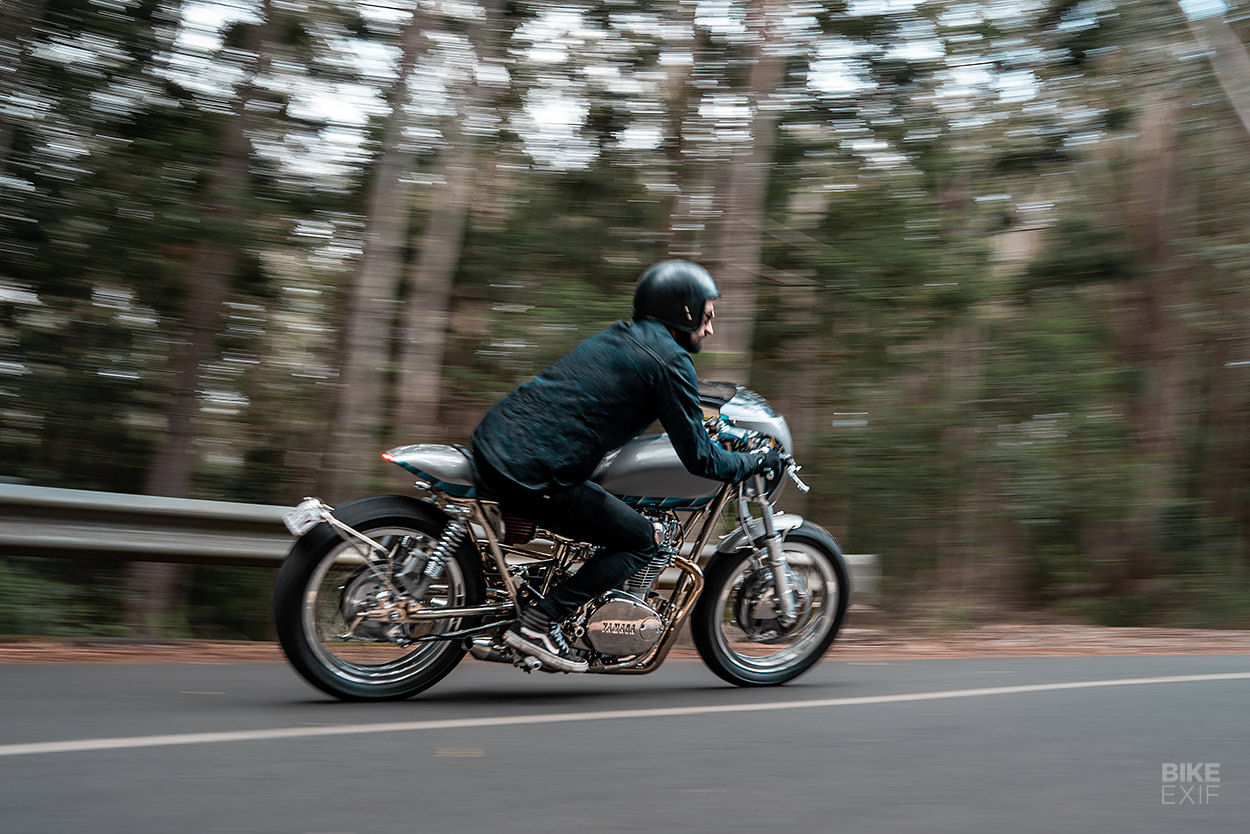