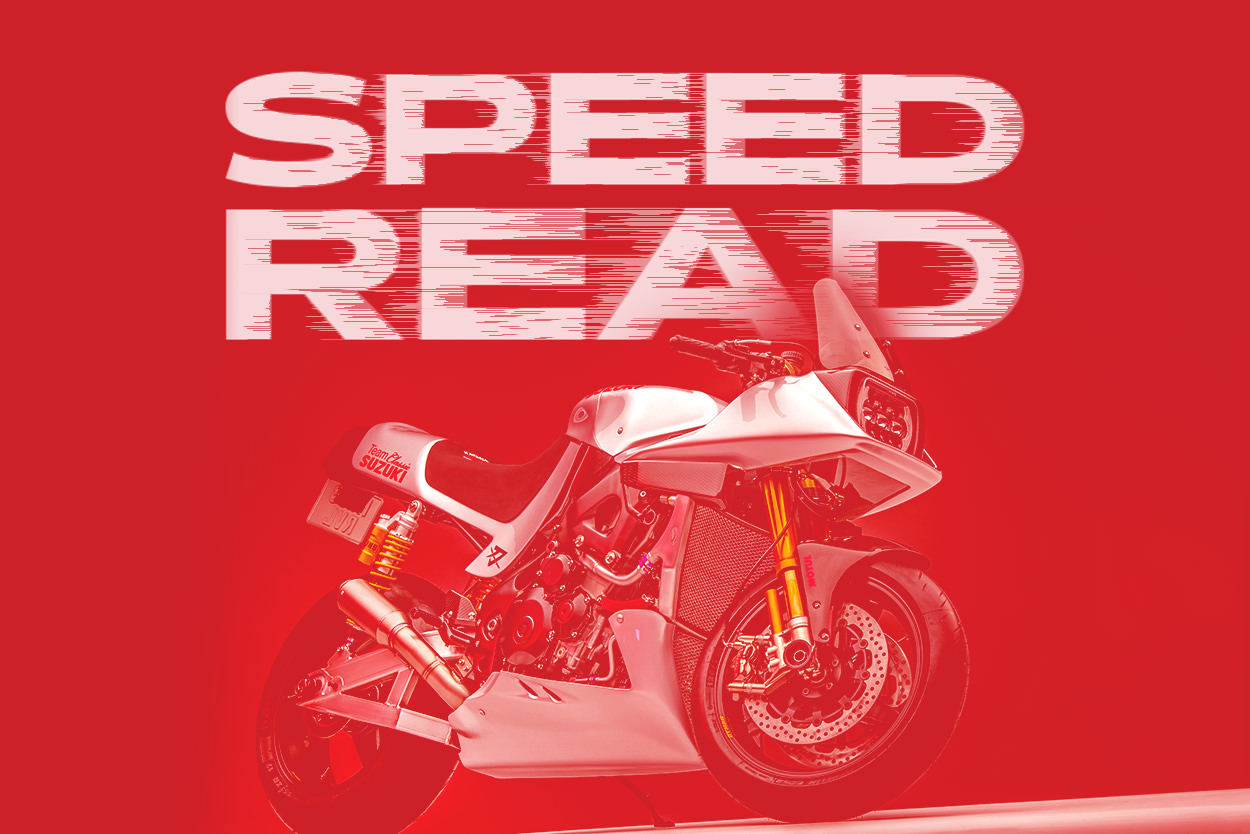 We’re kicking things off this week with the wildest Suzuki Katana restomod we’ve ever seen. Then we look at a classic Triumph desert sled, CCM’s new Maverick scrambler, and a formal blazer designed for motorcycling. 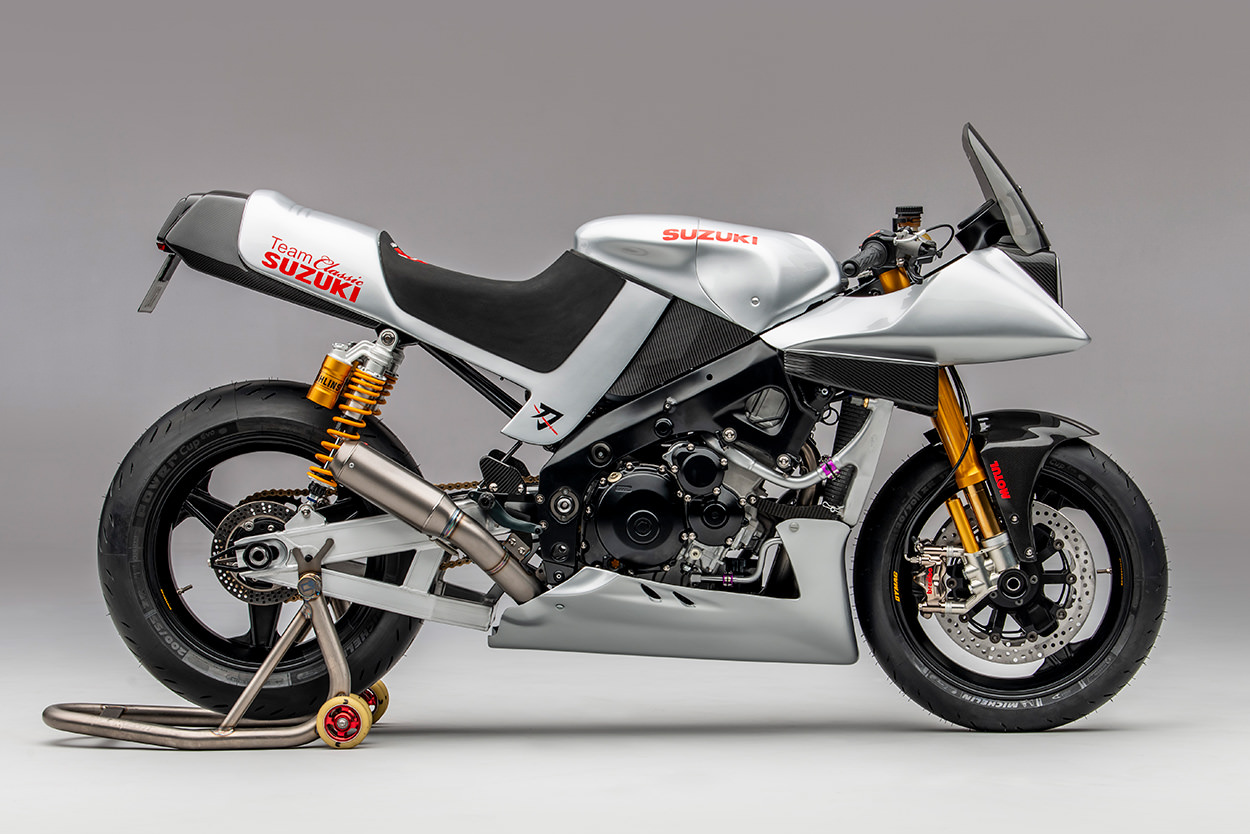 Suzuki Katana by Team Classic Suzuki We love a good Katana restomod as much as the next guy, but to call this scorching machine from Team Classic Suzuki ‘good’ would be an insult. It’s not the team’s first Katana build—they previously fielded one in the European Classic Endurance Championship. But this one’s built to ride on the street, and is on a whole other level. 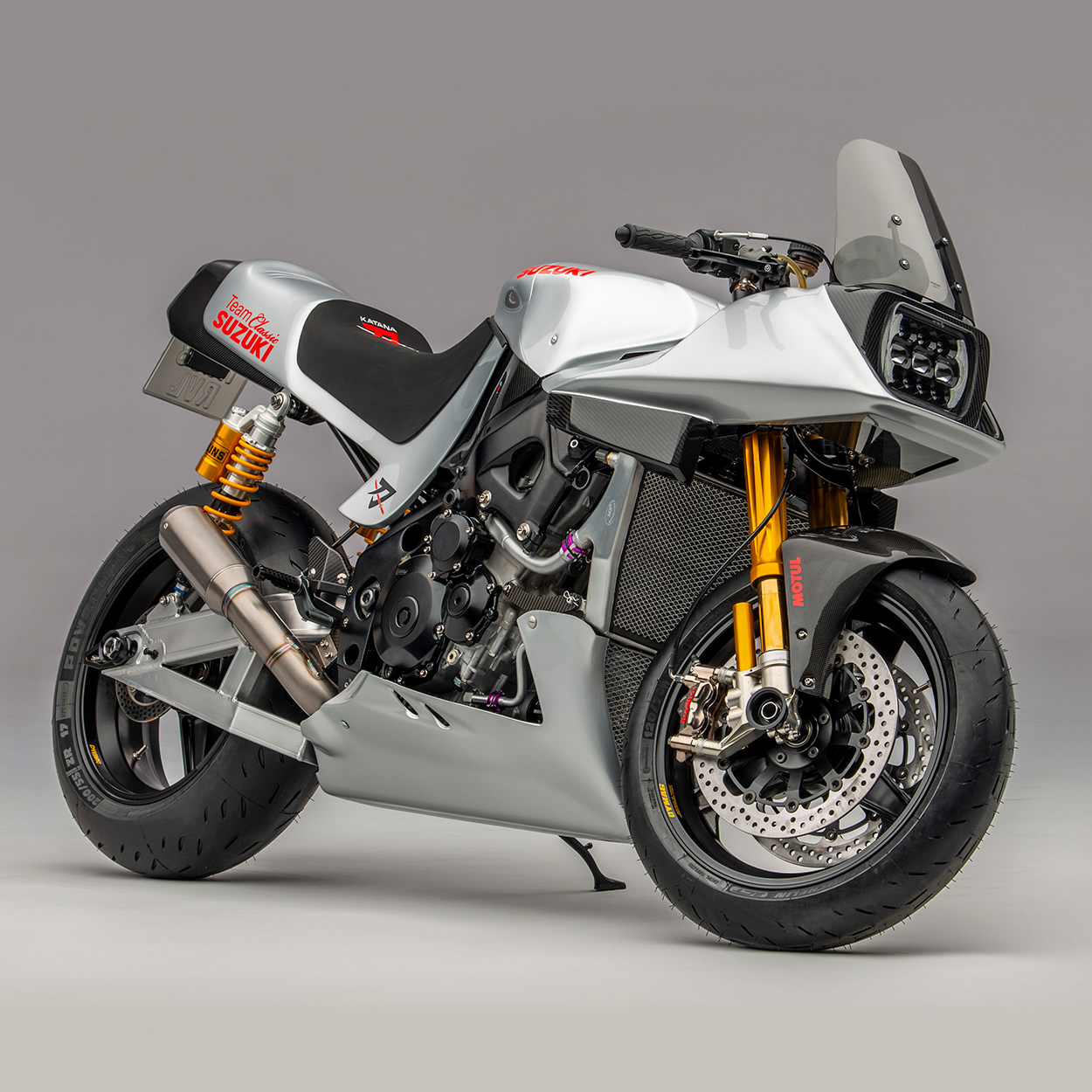 It’s technically not a Katana either. The motor’s a 2008 World Superbike-spec mill pulled from an Alstare GSX-R1000 race bike, and overhauled by the crew’s own Nathan Colombi. It’s hooked up to a set of Alstare WSBK headers with a Racefit connector and muffler, and a Yoshimura EM Pro ECU kit. So it’s good for 200 hp at the rear wheel. 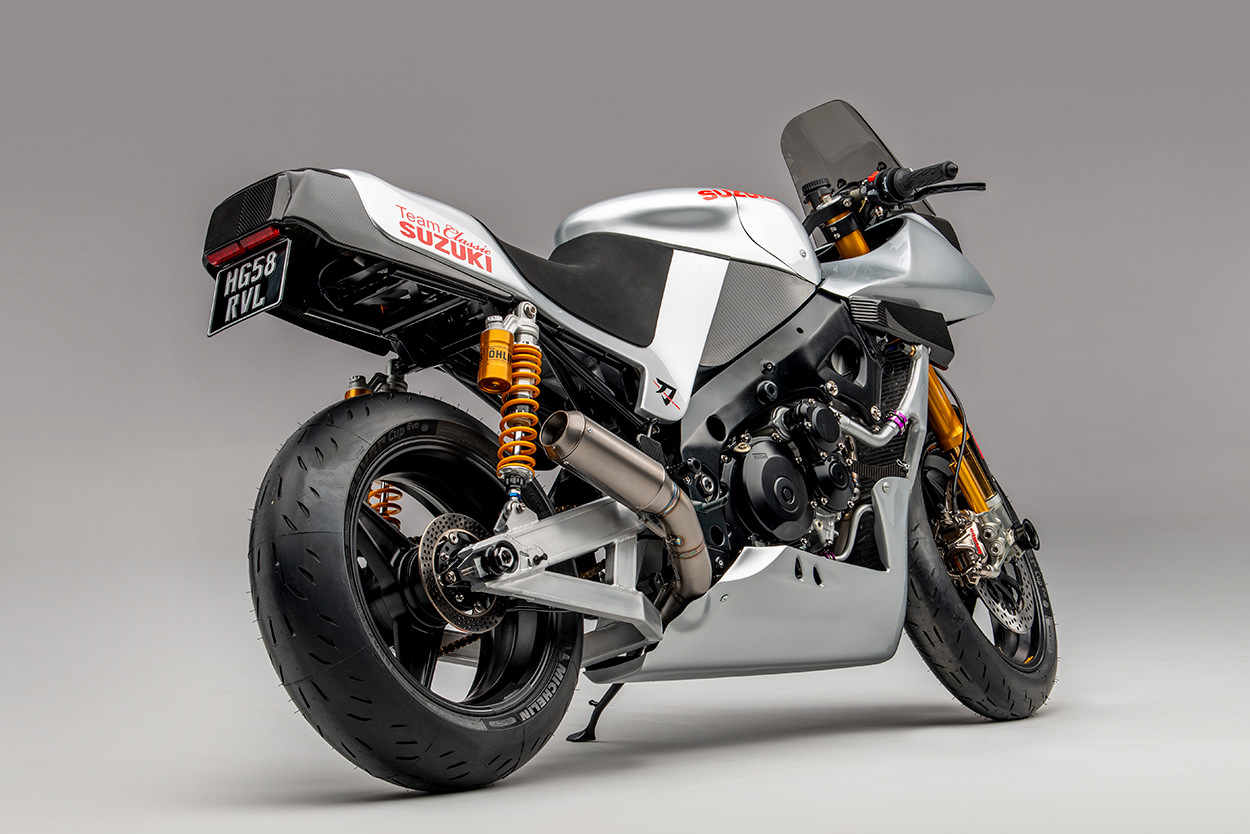 Team Classic Suzuki procured a new-old-stock Katana nose fairing from Suzuki’s own vintage parts program, then widened it by an inch to suit the build. 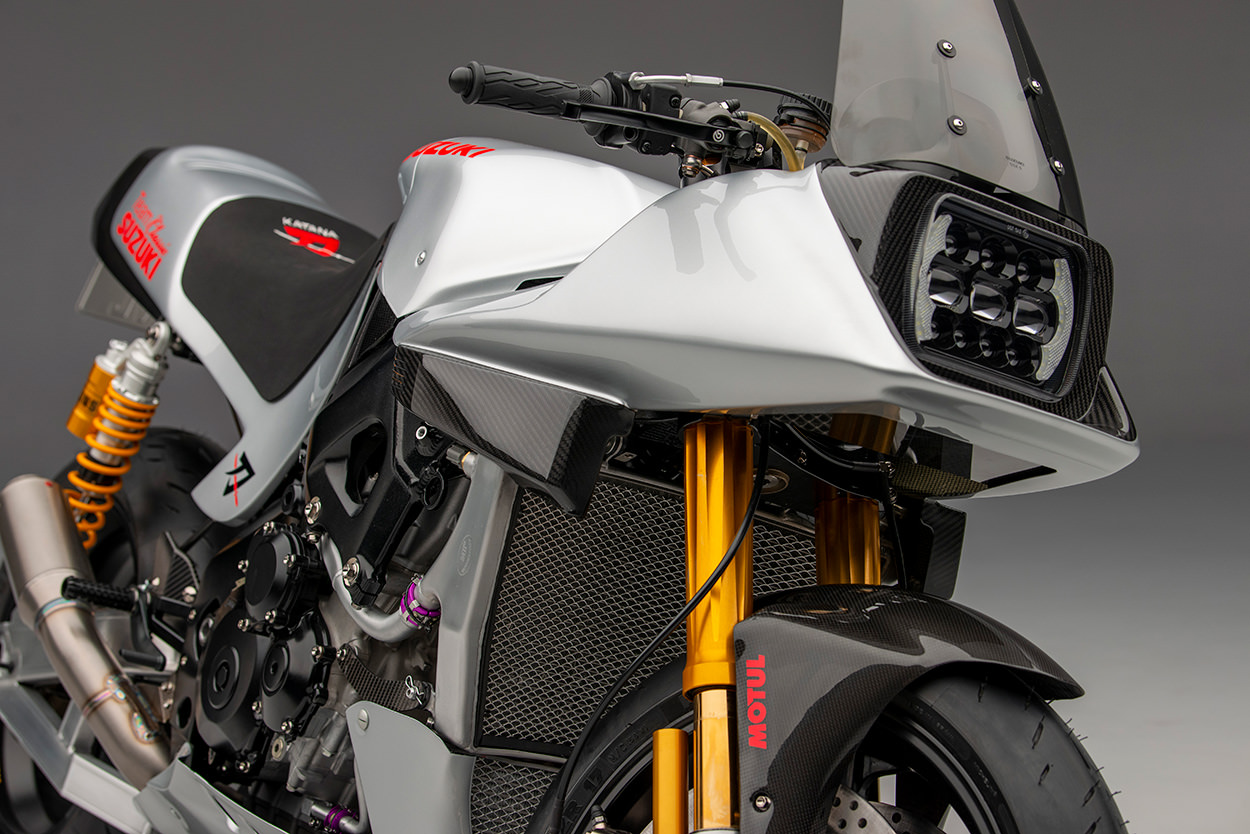 The tail section is from TCS’ own catalog, and was tweaked to interface neatly with the tank. The bike’s finished off with LED lighting, carbon trim, and a slew of top-shelf parts.

Resplendent in a traditional silver livery, and adorned with period-correct Suzuki and Katana logos, this is probably the wildest 80s tribute we’ve ever seen. [More] 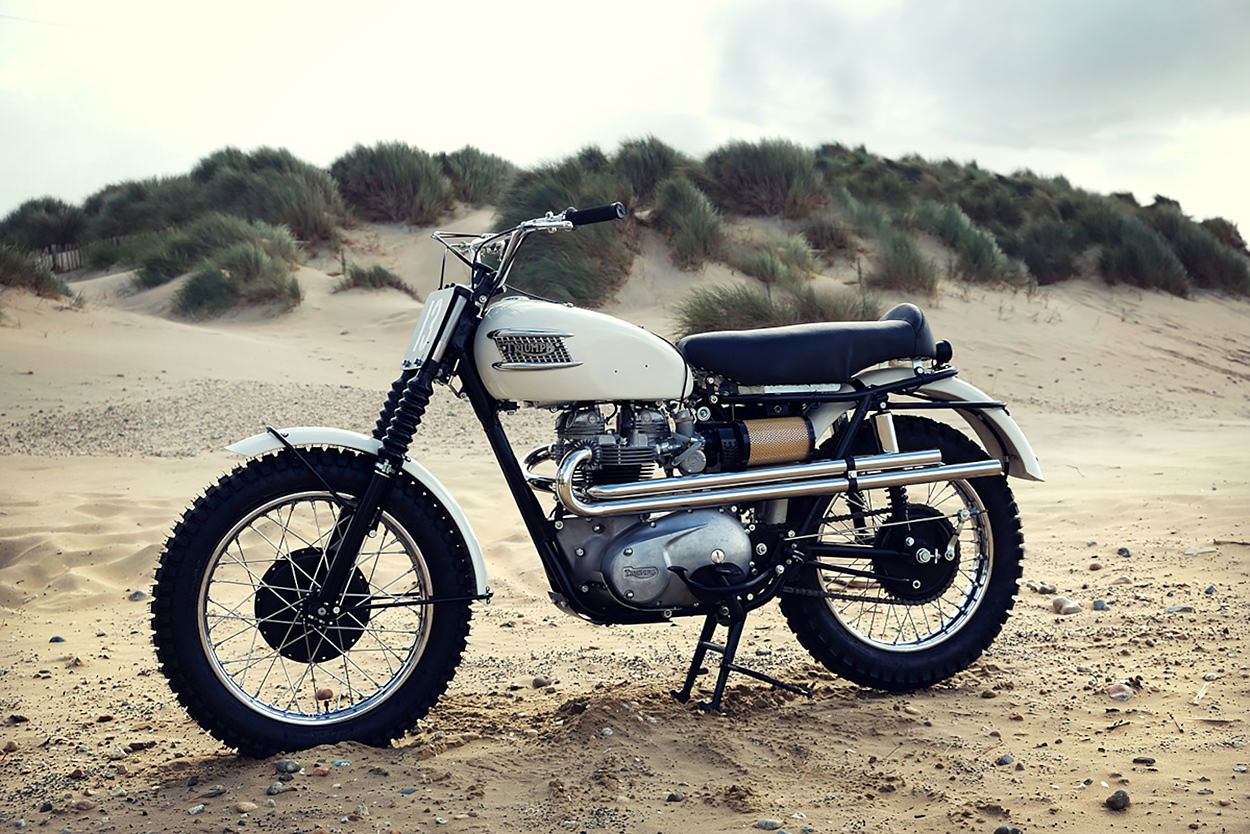 Ace Classics Bud Ekins desert sled replica We wax lyrical about the golden age of the California desert sled, but Bud Ekins lived it. He’s the guy that got McQueen into dirt bikes, performed the jump in The Great Escape and kickstarted the legendary Baja 1000 desert race.

This delightful vintage Triumph isn’t one of his—but it’s a damn nice replica. It was built by the father and son team at London’s Ace Classics, for a collector in France who wanted another classic Triumph in his garage. The guys suggested a Bud Ekins build, then got stuck into researching every last detail of how Bud put his bikes together, to get it just right. 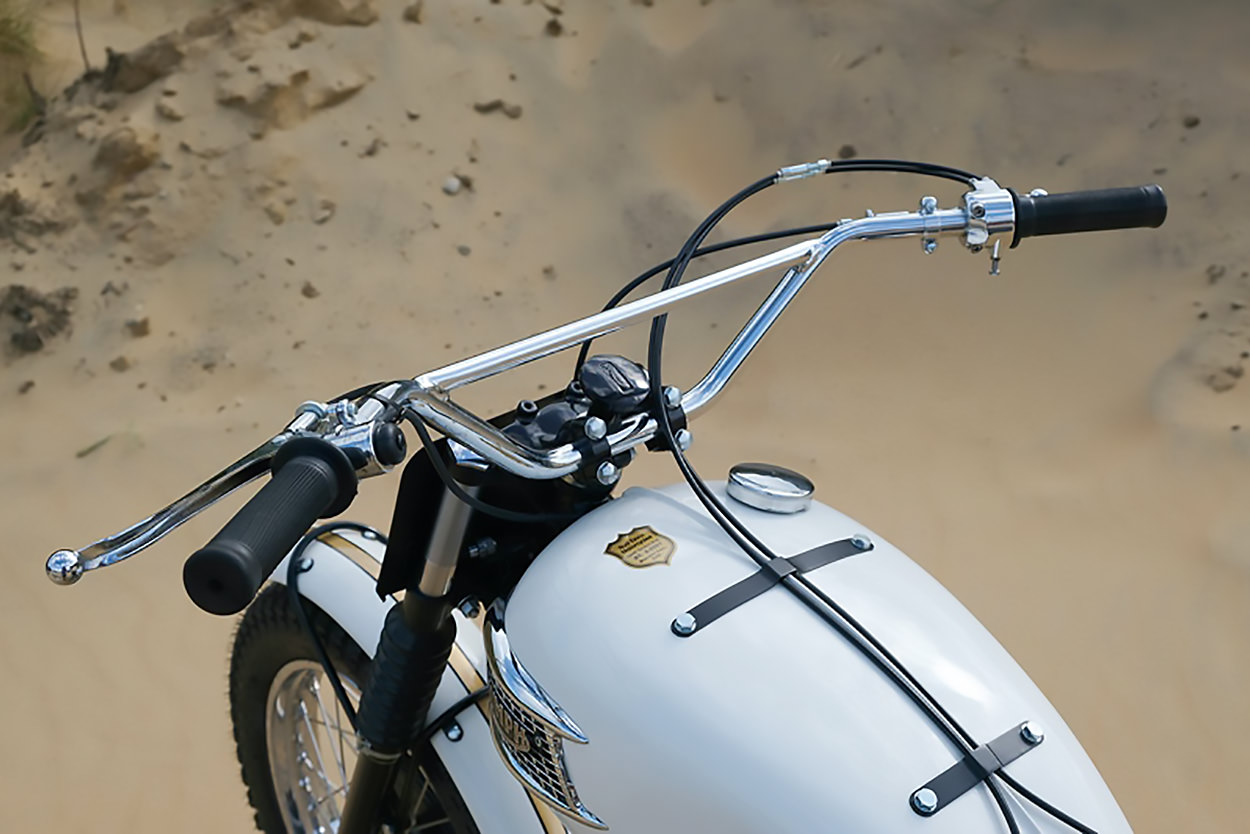 Starting with a 1963 Triumph T120 Bonneville TT, Ace Classics worked in lot of interesting details to set the bike apart—like routing the throttle cables over the top of the tank. It’s also got high pipes, braced handlebars, a Bates seat, a skid plate, and an oversized air filter. The front wheel’s from a 1957 bike, because Bud favored the older half-width hub brakes, which were lighter. 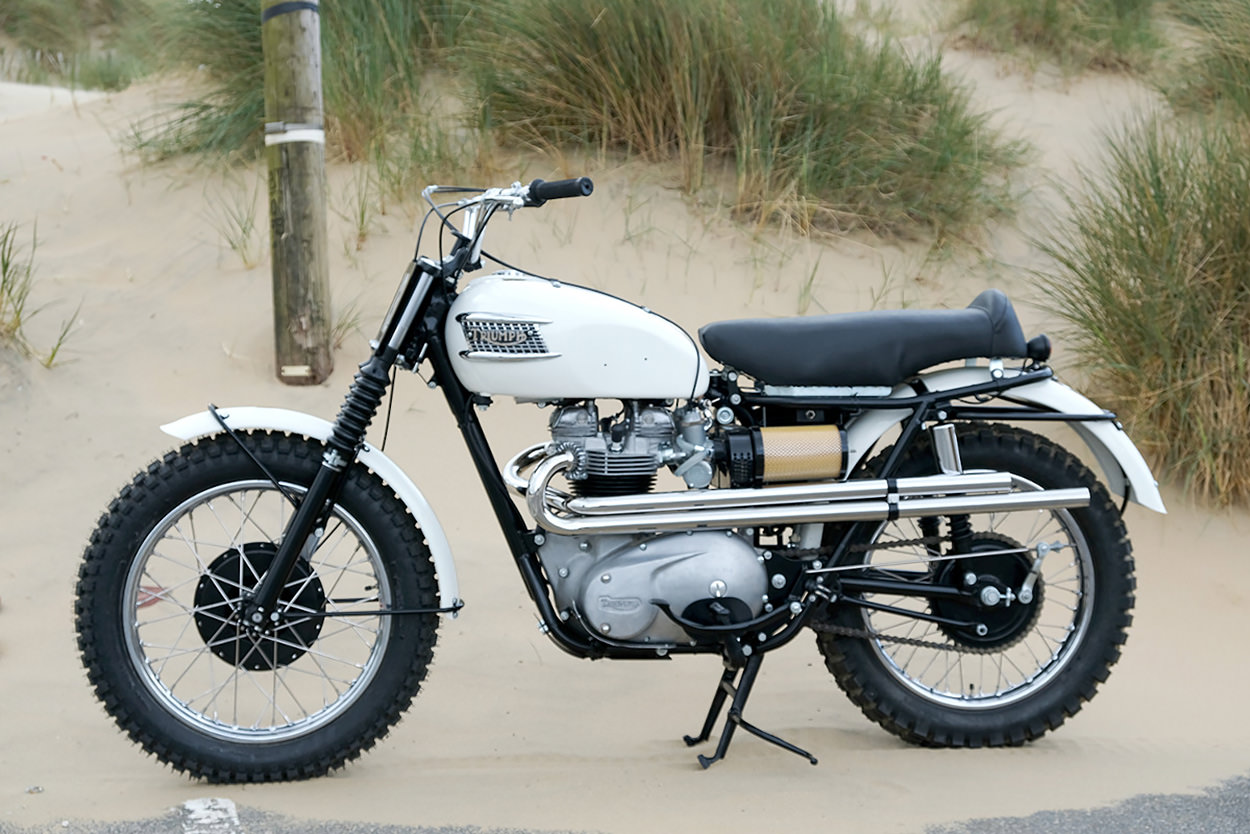 Ace Classics also swapped out the rear shocks, fitted off-road tires, and saw to smaller details like bracing plates for the foot controls. It’s the perfect time machine build, and is reportedly fun to ride—so let’s hope it gets to kick up dust once in a while. [Ace Classics | Source] 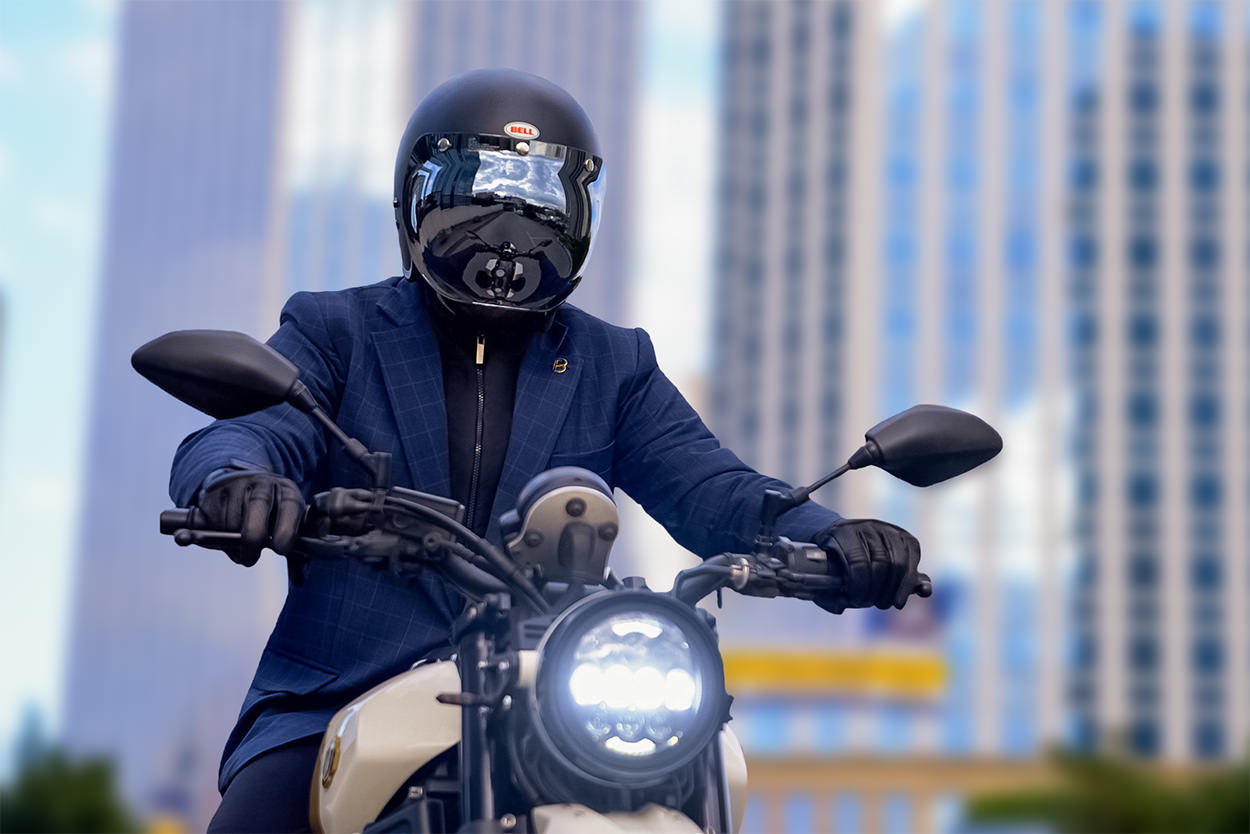 The Brummell riding blazer This is quite possibly the most niche product we’ve ever come across: a formal blazer designed specifically for motorcycle use. It sounds like a kooky idea, but we have to give Brummell credit, because it’s a surprisingly well-considered piece of gear.

On the outside, the Brummell blazer looks like a typical tailored blazer, and comes in black, navy or checked fabric. But underneath the swanky exterior is a layer of abrasion-resistant Schoeller-Keprotec material, with PU foam CE level 2 protectors at the elbows and shoulders. 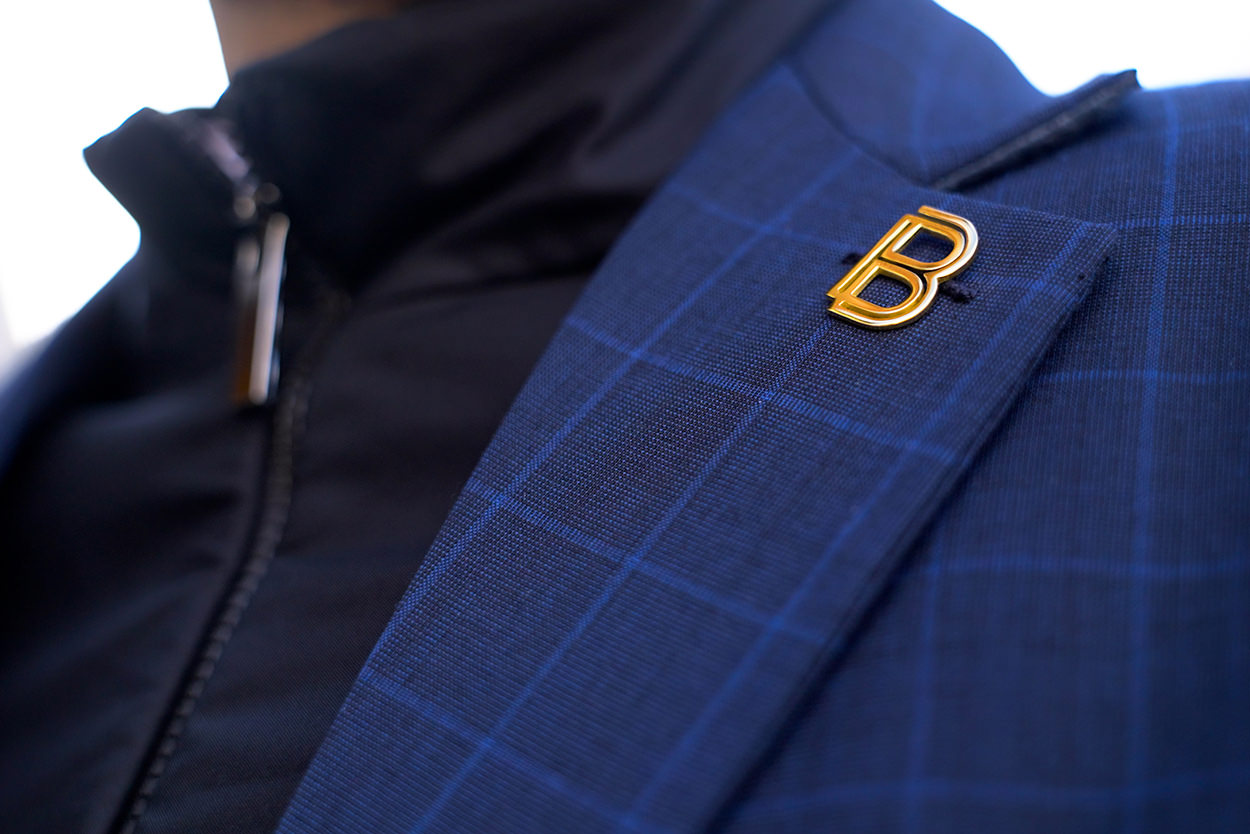 The backs of the shoulders are gusseted so that the blazer’s comfy when you’re riding. There’s also a hidden fastening mechanism with YKK zippers, because a simple button won’t do much to keep a blazer closed at speed. And there’s a gilet that can be zipped-in to keep you warm.

The Brummell blazer will retail at a not modest $649, but you can get it on Kickstarter for $529-$549, depending how quick you are. Outside of the Distinguished Gentlemen’s Ride or commuting to a job with a formal dress code, we don’t really see much use for formal riding gear. But some folks clearly do, because Brummell’s already hit its Kickstarter goal. [Kickstarter] 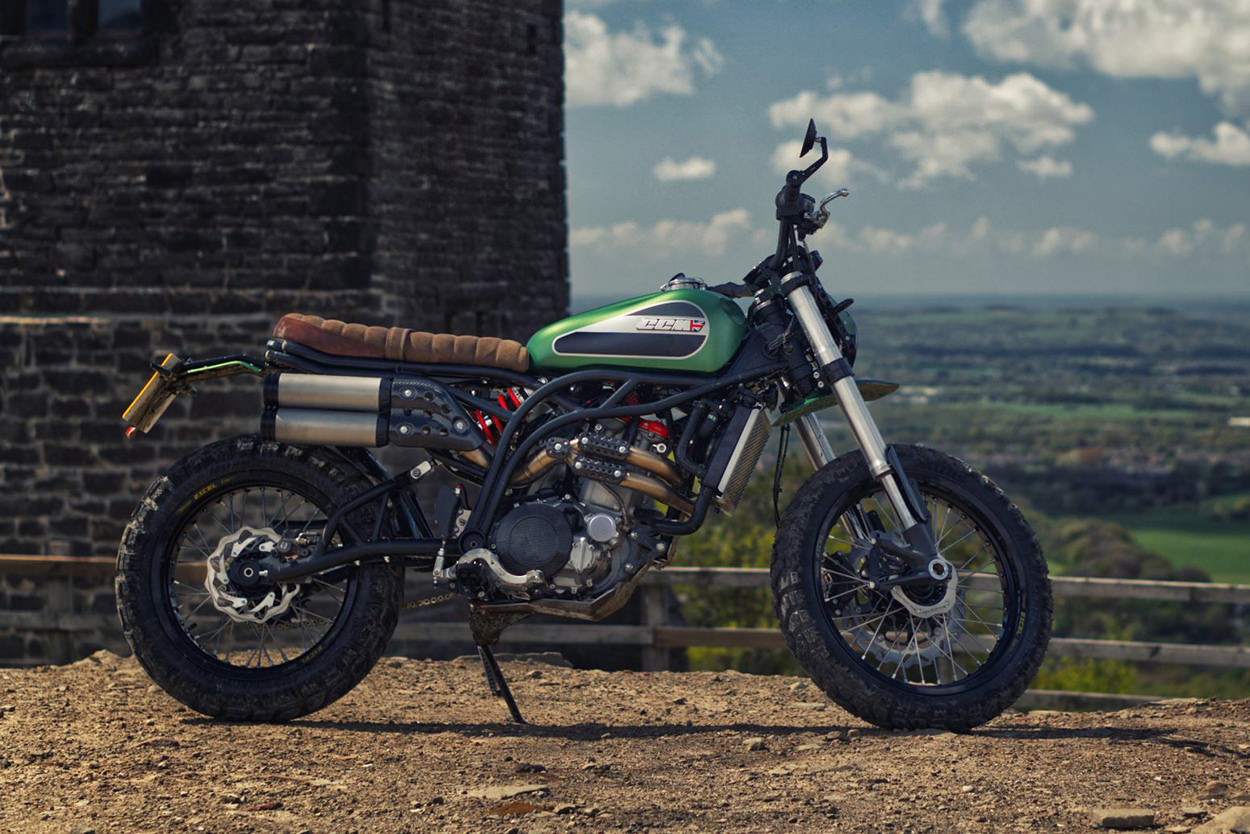 CCM Maverick The independent British manufacturer CCM has been on a roll lately. Its Spitfire range has been well received, and has now grown by one more model: the retro scrambler-styled Maverick.

CCM’s Spitfire models all share the same trellis frame, and a 600 cc single-cylinder Husqvarna motor that makes 55 hp and 50 Nm of torque. 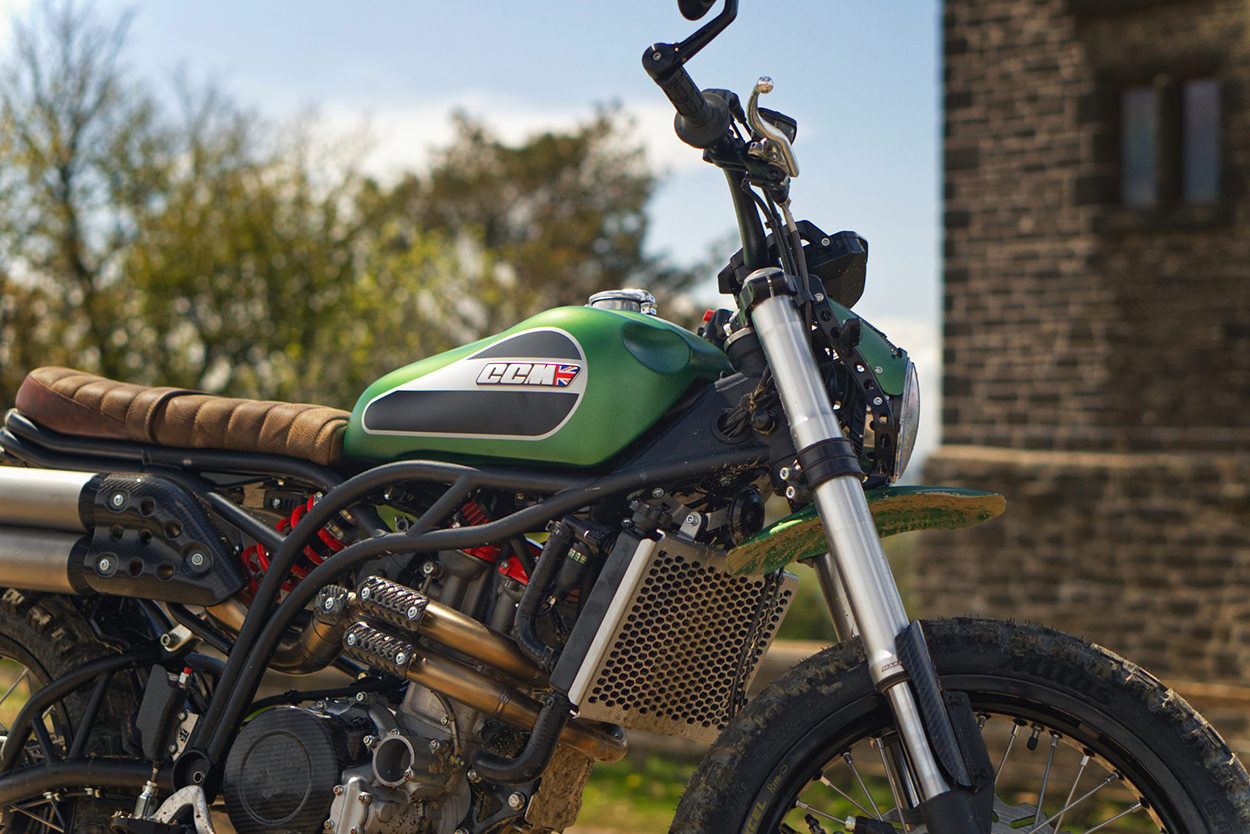 The Maverick continues that trend, and adds a heavy hit of scrambler styling. From the compact fuel tank, to the bench seat and high double pipes, this might just be one of the best-looking scramblers on the market right now.

The Maverick comes with a digital speedo, wide bars and a high front fender. It weights a paltry 145 kilos (319 lbs), and has adjustable suspension with 120 mm at both ends. And it retails for about £9,995 (roughly $14,153) in stock trim, putting it in the same ballpark as the Ducati Scrambler Desert Sled.

That comparison might make it sound expensive, but the Maverick appears (in photos at least) to have fit and finish that’s a cut above most factory bikes. There’s also a certain bespoke feel inherent to bikes from smaller companies that’s hard to replicate. Plus if someone’s out there making retro dirt bikes with punchy single-cylinder motors, we’re all for it. [CCM Maverick | Source]