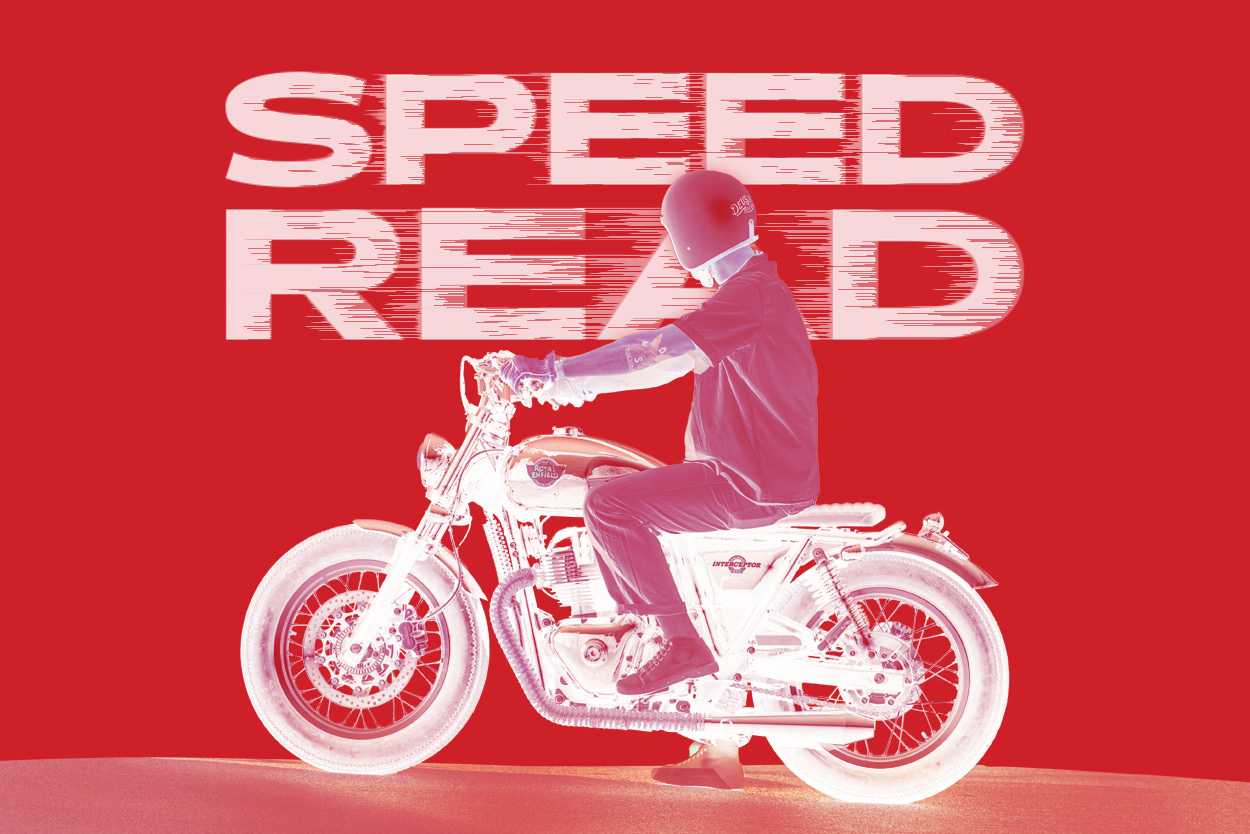 Deus leads the charge this week, with a Royal Enfield sporting the same style as their earlier builds. Plus we look at a vintage BMW restomod from Bolt, a Sportster desert racer from Rusty Butcher, and a new electric motorcycle from the Ukraine. 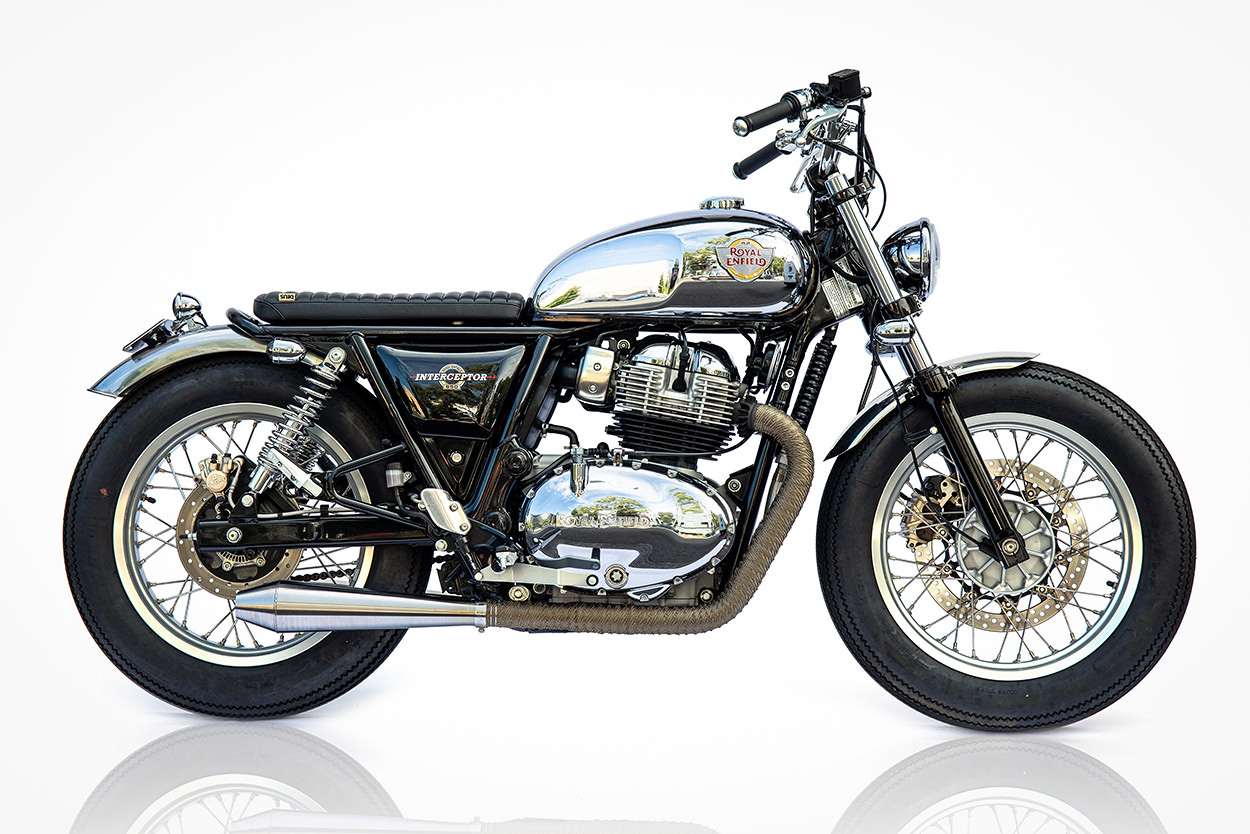 Royal Enfield Interceptor by Deus ex Machina The most striking thing about this Interceptor, is that it reminds us of the bikes that Deus Australia was churning out in its early days. Head wrench Jeremy Tagand put the shop on the map with his bobbed Yamaha SR500s and Kawasaki W650s; this Enfield could blend in with them effortlessly. 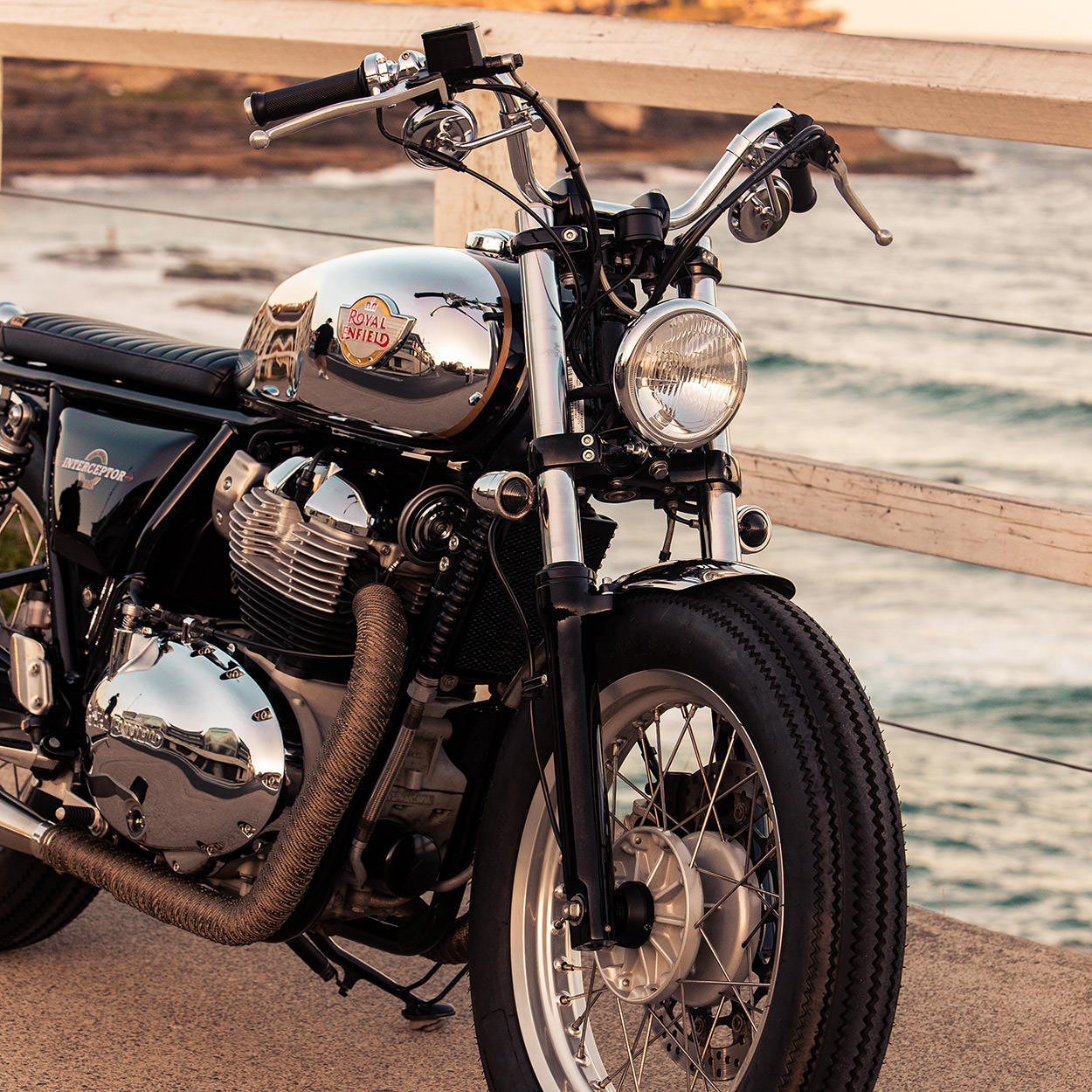 Dubbed ‘El Presidente,’ Deus describe it as “2 parts chrome, 1 part slammed, a dash of Japanese restraint.” It was built for a client who referenced an earlier Kawasaki W650 build—so Jeremy had something of a template to work from.

The work started with a subframe edit, with a shortened and kicked-up rear loop. Up top is a skinny bench seat, upholstered by Bad Arse Trim Co. Stainless steel fenders cap the bike off at both ends, and the tail’s finished with a classic Bates-style taillight. 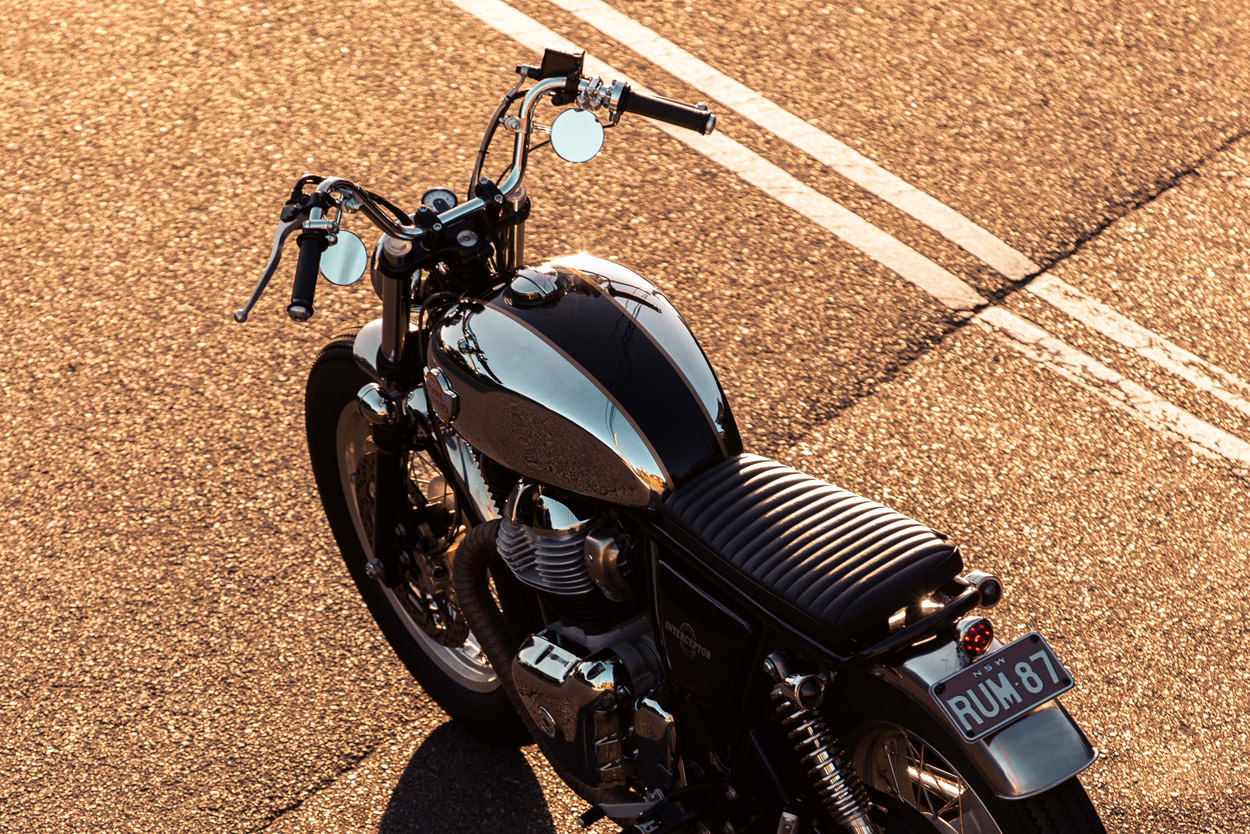 The front forks were dropped a touch, and equipped with progressive springs. A set of shorter-than-stock Icon shocks were installed to drop the rear end.

Up top are a set of high-rise bobber-style handlebars, kitted with Motone switches that run off a ‘blackbox’ controller from Purpose Built Moto. There’s a Bates-style headlight out front, with a tidy little Motogadget speedo tucked in where the ignition used to be. The bike’s now switched on via a Motogadget RFID fob. 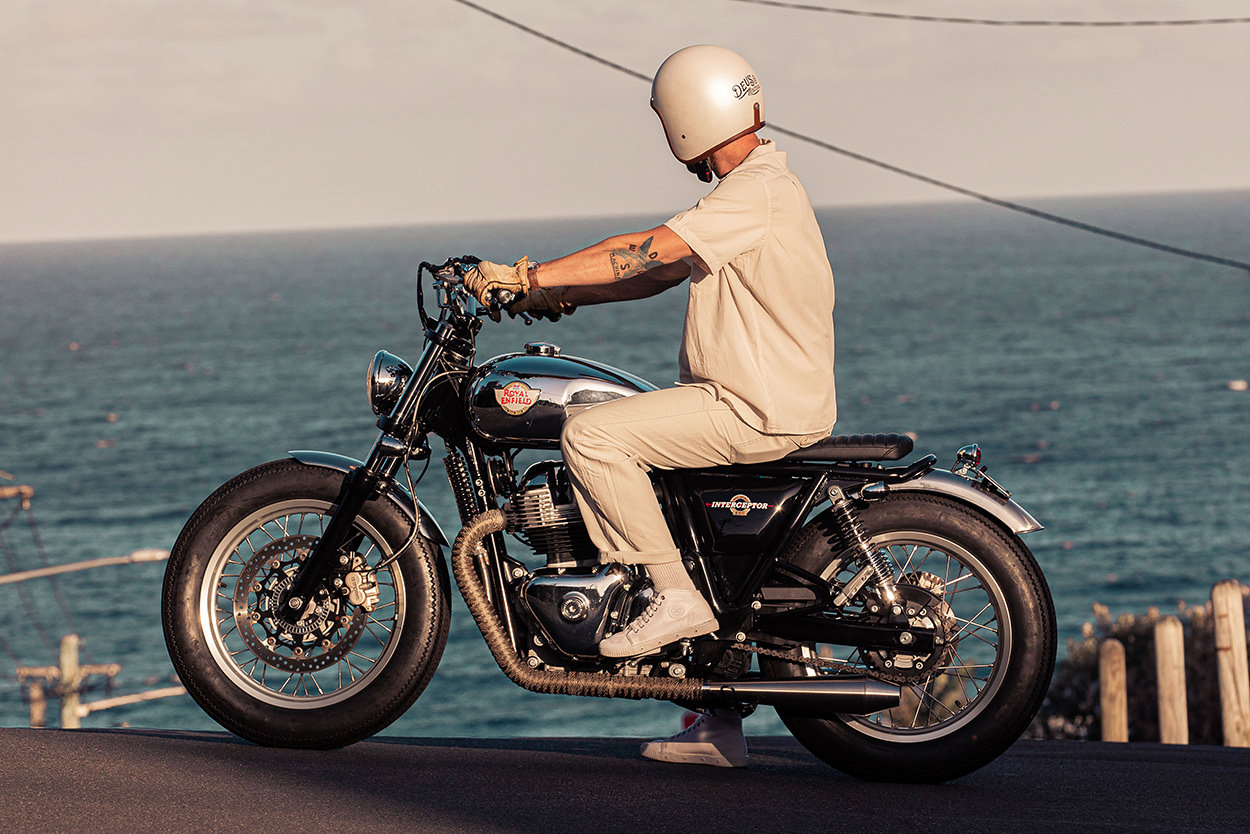 The tank is stock, but Jeremy stripped the engine covers off to have them chromed. A set of classic reverse-cone mufflers finishes things off. And yes, it has sawtooth tires and pipe wrap—but they suit the overall style, no? [More | Photos by Kenyon Batterson] 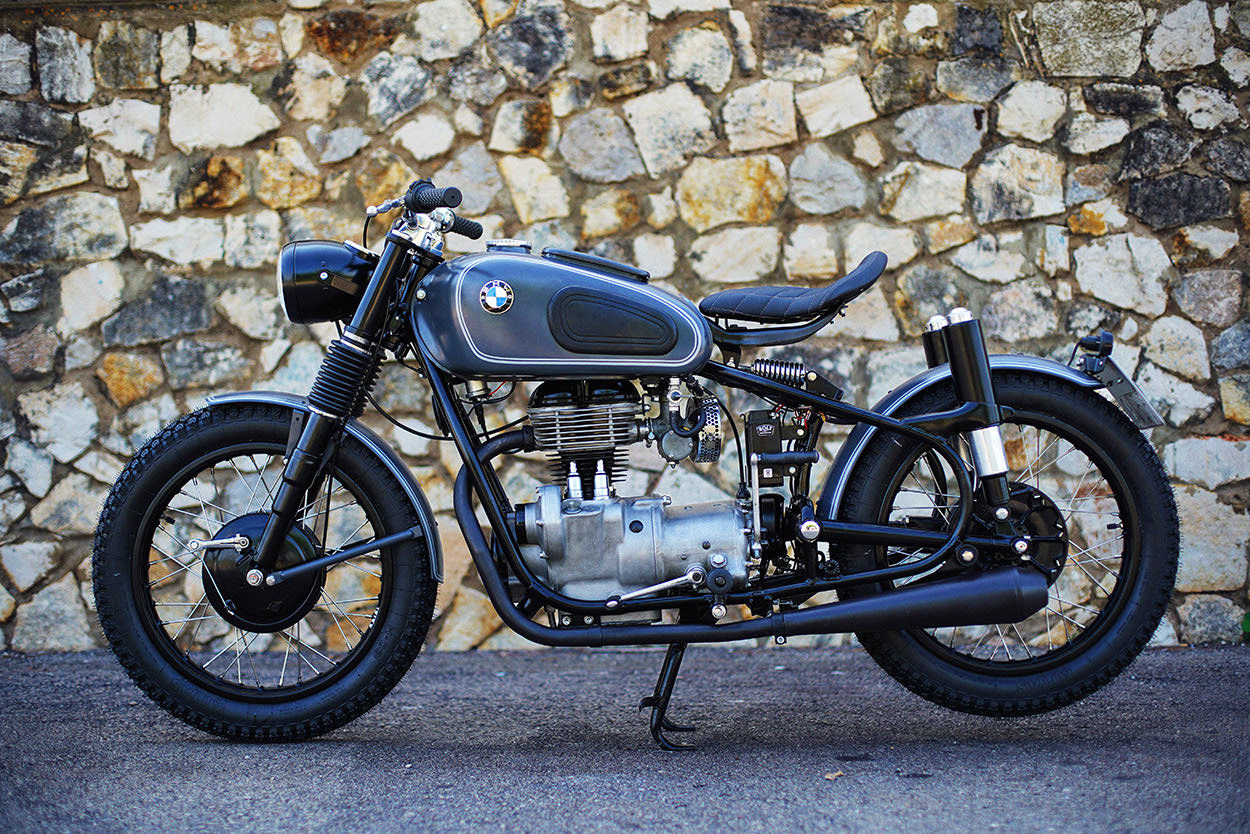 BMW R27 by Bolt We’re used to seeing high-spec performance-orientated machines from Bolt Motor Co. After all, they share a workshop with the auto racing team that Bolt founder, Adrian Campos, owns.

So this beautifully restored BMW R27 came as a total surprise. Bolt say they wanted to get “the maximum potential out of a bike that was on its last legs,” which is why they opted not to mess with its appearance. But it does hide some sneaky tweaks. 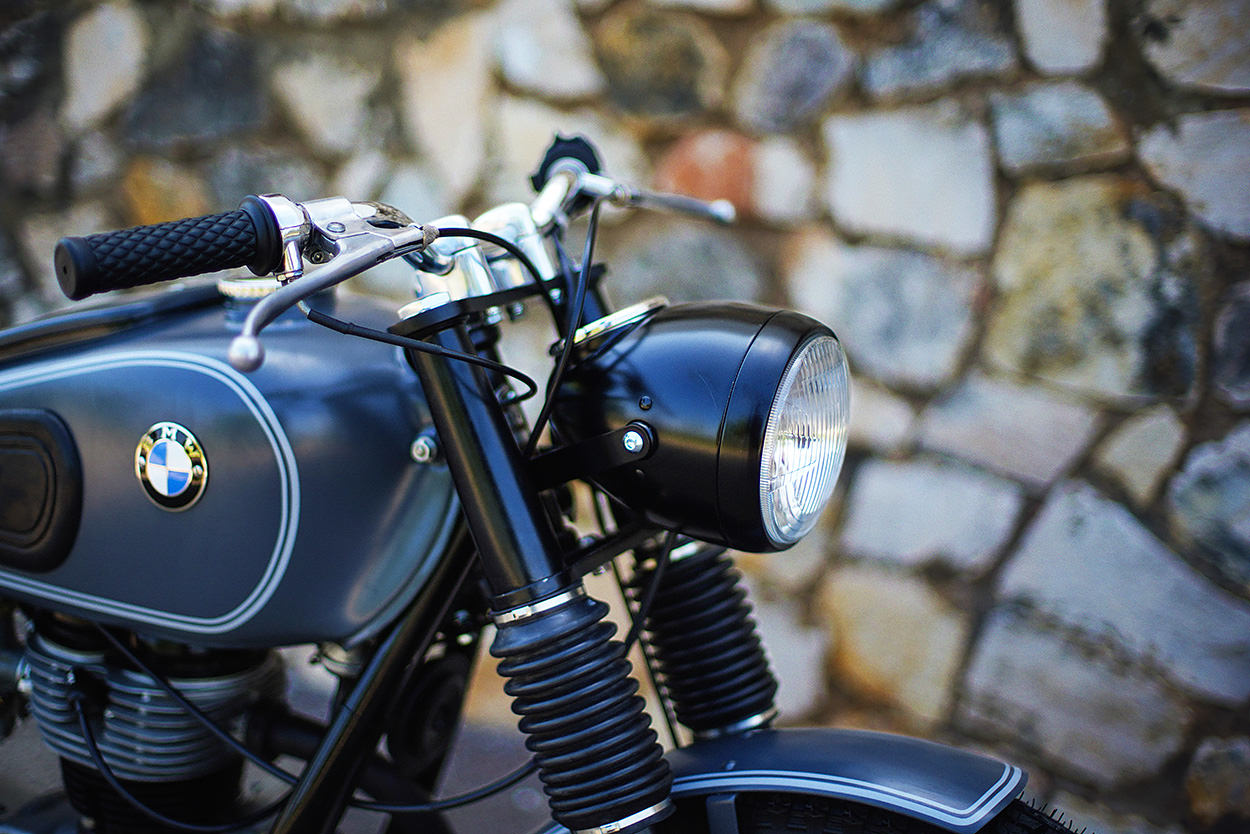 For starters, Bolt couldn’t source a complete Earles front end for the vintage R27. So they scraped together what parts they could to build a set of conventional forks, using exaggerated fender struts to subtly mimic the shape of the original setup.

The engine was fully restored—or rather, rebuilt from the ground up. The bike had stood for a long time and needed a lot of love to bring back to life, but finding parts was a chore, since many of them had been discontinued. Eventually, the crew managed to replace every last bit—including the crankshaft, connecting rod, cylinder, piston, valve guides and more.

Parts like the handlebars and controls are originals, but they’ve been refurbished. Bolt installed a 60s-era speedo into the original headlight bucket, which was reportedly quite challenging, and rewired the bike with modern components. The new paint is simple, with pin striping that pays respect to BMW’s heritage.

In the end, this R27 might not be as wild as Bolt’s usual fare, but it’s still elegant and charming. And given how hard it was to come by the right parts, it was likely even more challenging to build than a ‘regular’ Bolt custom. [Bolt Motor Co.] 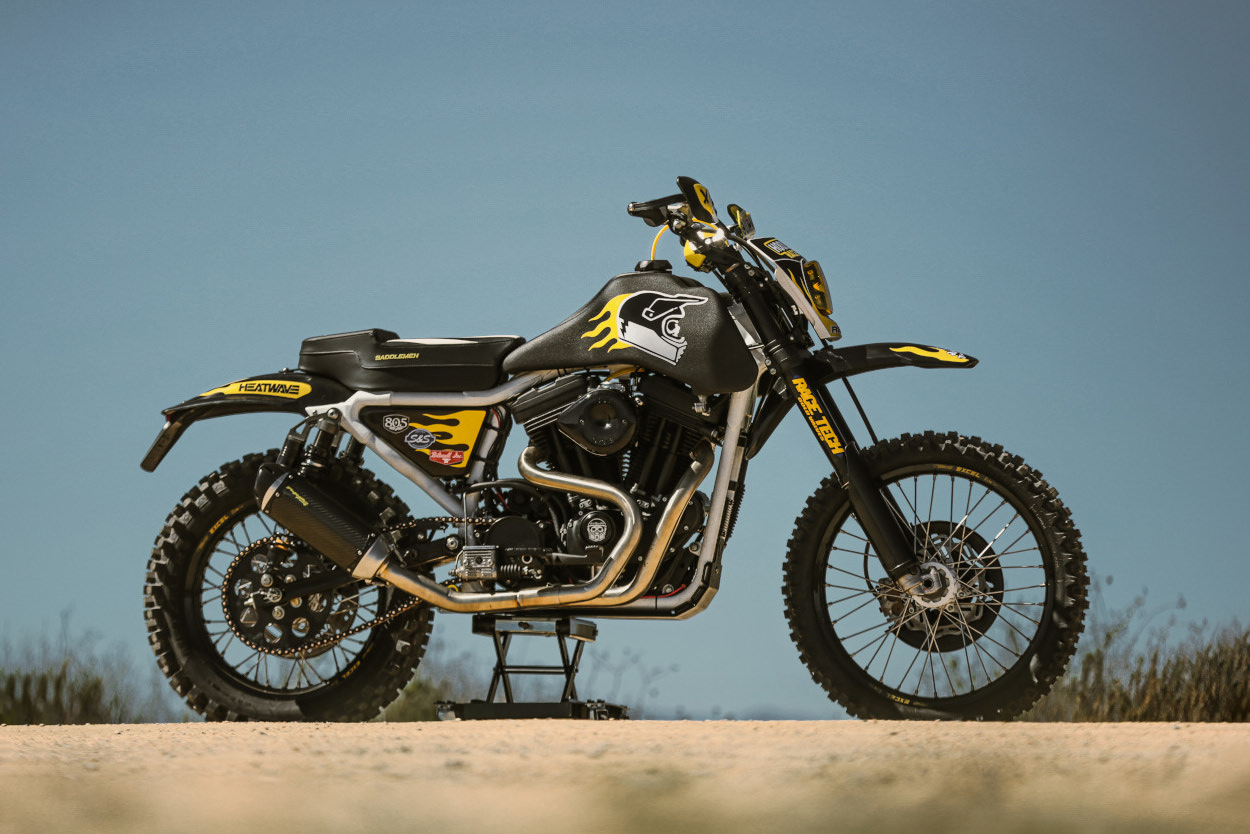 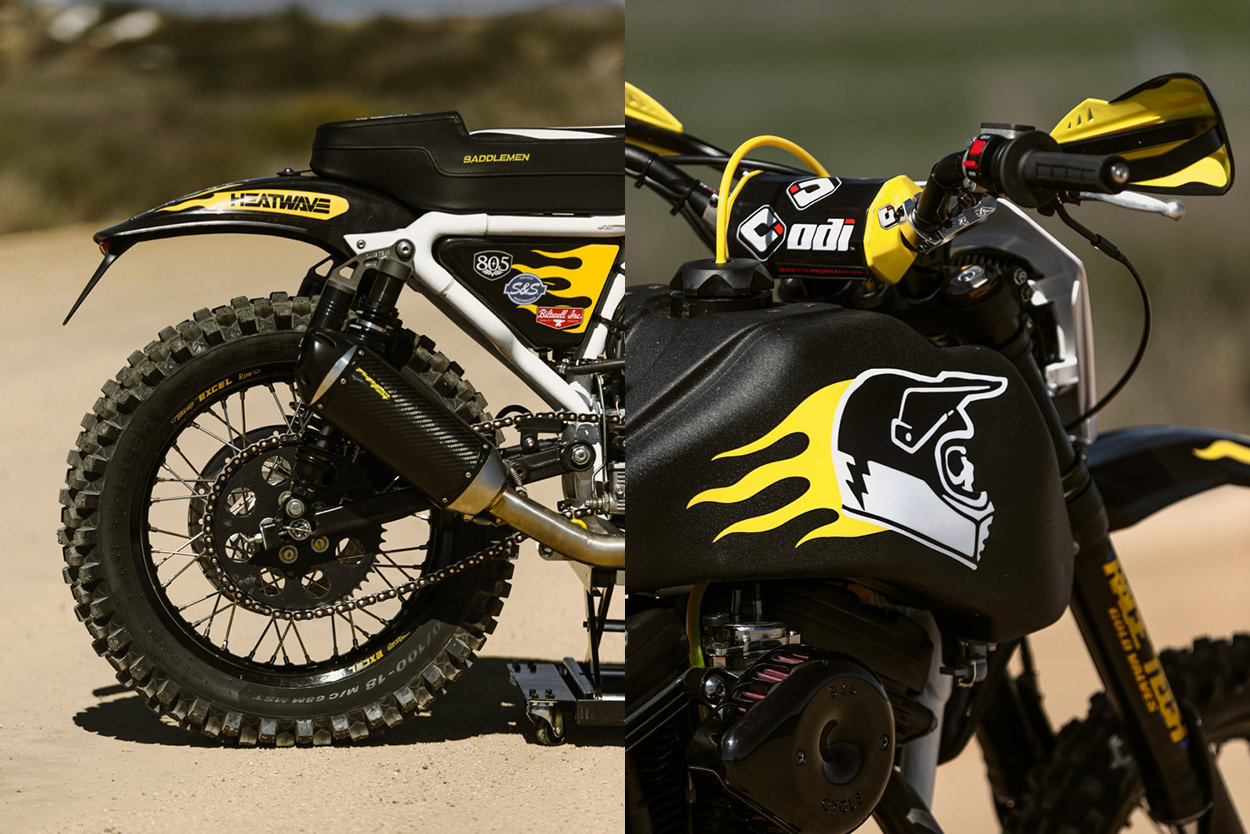 This 2003-model Sportster 883 was built by Rusty Butcher’s founder, Mark Atkins, to hoon around with on dusty desert rides with friends. But as it happens, it was wrapped up in time for the Mint 400 desert race in Las Vegas. So Mark entered it in the Hooligan class—and finished fourth.

Rusty Butcher has built all manner of ‘dual-sporty,’ but this is probably the wildest example yet. The motor’s been bumped up to 1,200 cc with a kit from S&S Cycle, and runs with an automatic clutch from Rekluse. There’s an S&S air cleaner too, and a custom carbon exhaust that Mark designed, and TBR built. 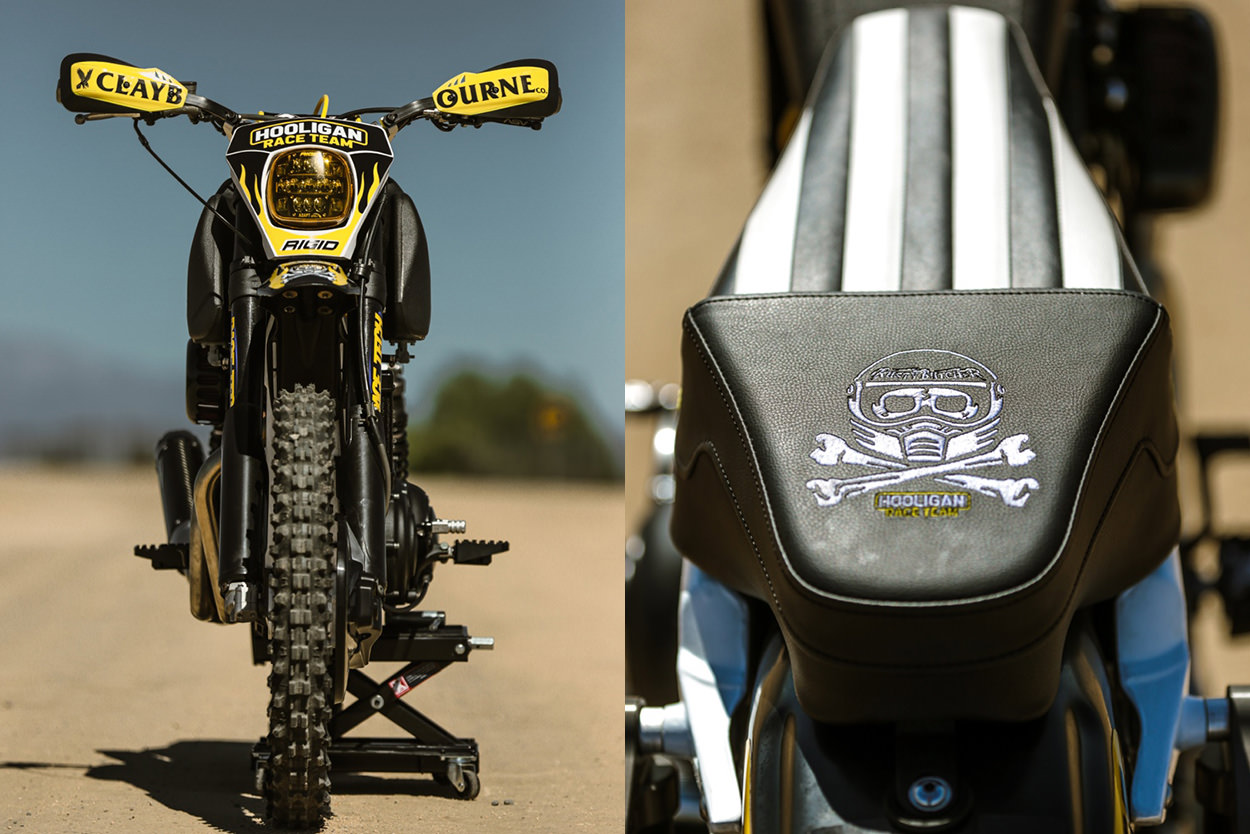 Up front are the forks from a Honda CRF450 with Race Tech valves; custom 16.5” Race Tech shocks do duty out back. The wheels are a dirt-loving 21F/18R combination, built by Dubya with Excel rims.

The bodywork on this H-D scrambler is inspired. Wedged between a pair of motocross-style fenders are an IMS gas tank and a Saddlemen seat. The tank might look familiar—it’s the same design that was used on the groundbreaking Carducci Harley adventure bike. 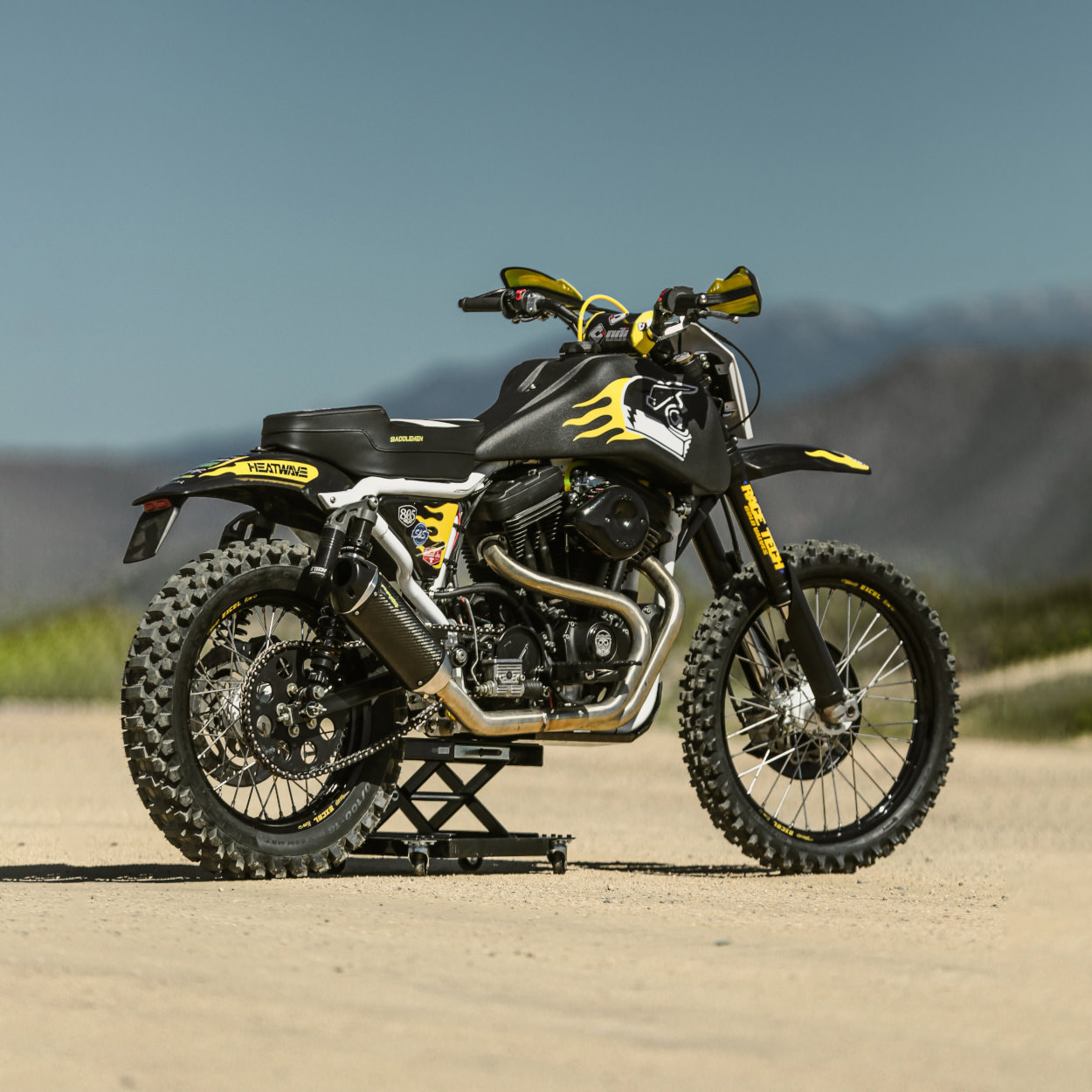 Other tweaks include a custom oil tank and battery holder, a bash plate and some light frame edits. Up in the cockpit are ODI bars with pared-down switchgear and Cycra hand guards.

So what’s it like to ride? “I always tell people it’s like hanging onto a bull full speed that’s out of control,” says Mark. [More] 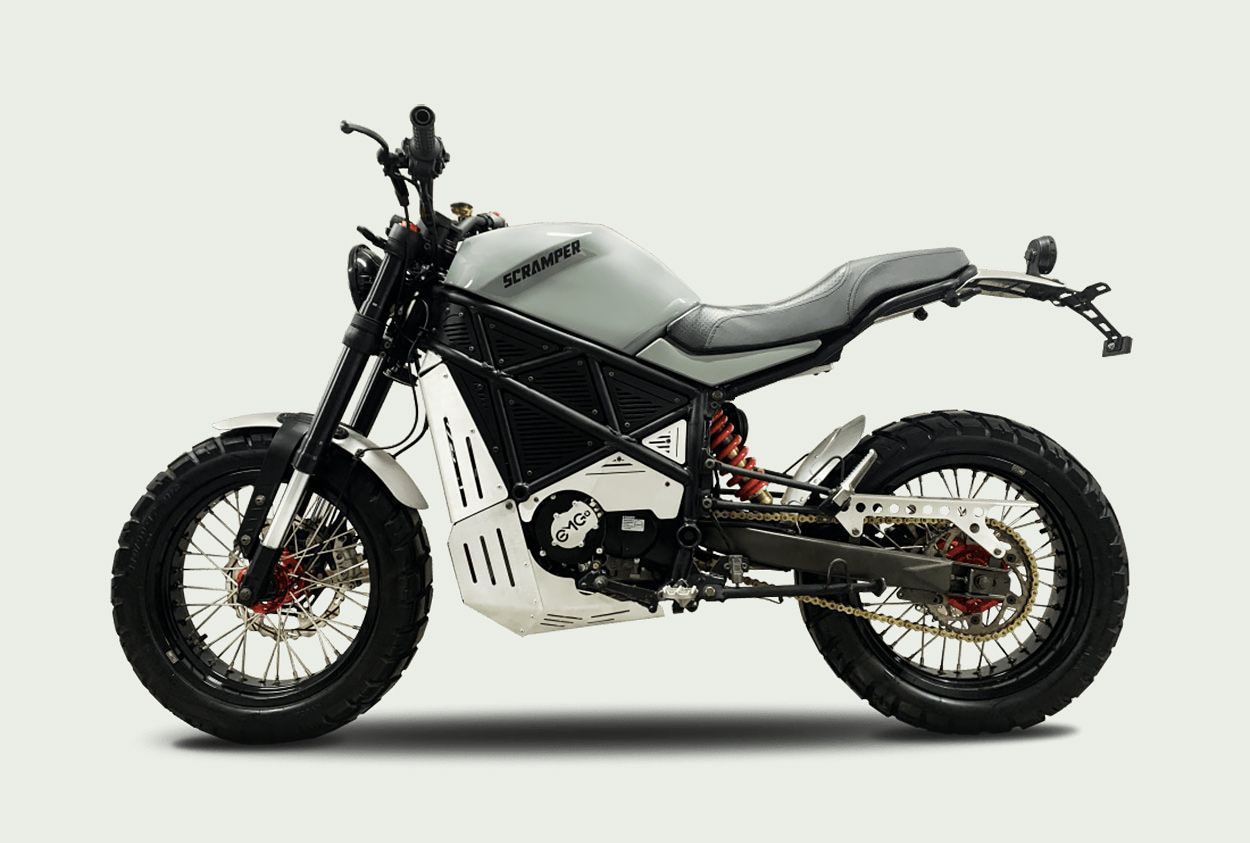 EMGo ScrAmper We can only imagine how hard it must be to run a business in the Ukraine right now, but one electric motorcycle company is forging ahead. The Odessa-based company EMGo has just launched a round of crowdfunding on Indiegogo for their ‘ScrAmper’ electric scrambler.

Starting at a pre-order price of €6,000 [about $6,620], EMGo have slated November as their projected shipping date. To achieve that, they’ve moved production to Poland, and their warehousing operation to Germany. And to support Ukraine’s resistance against Russia’s invasion, they’ll build one motorcycle for the military for every 15 sold. 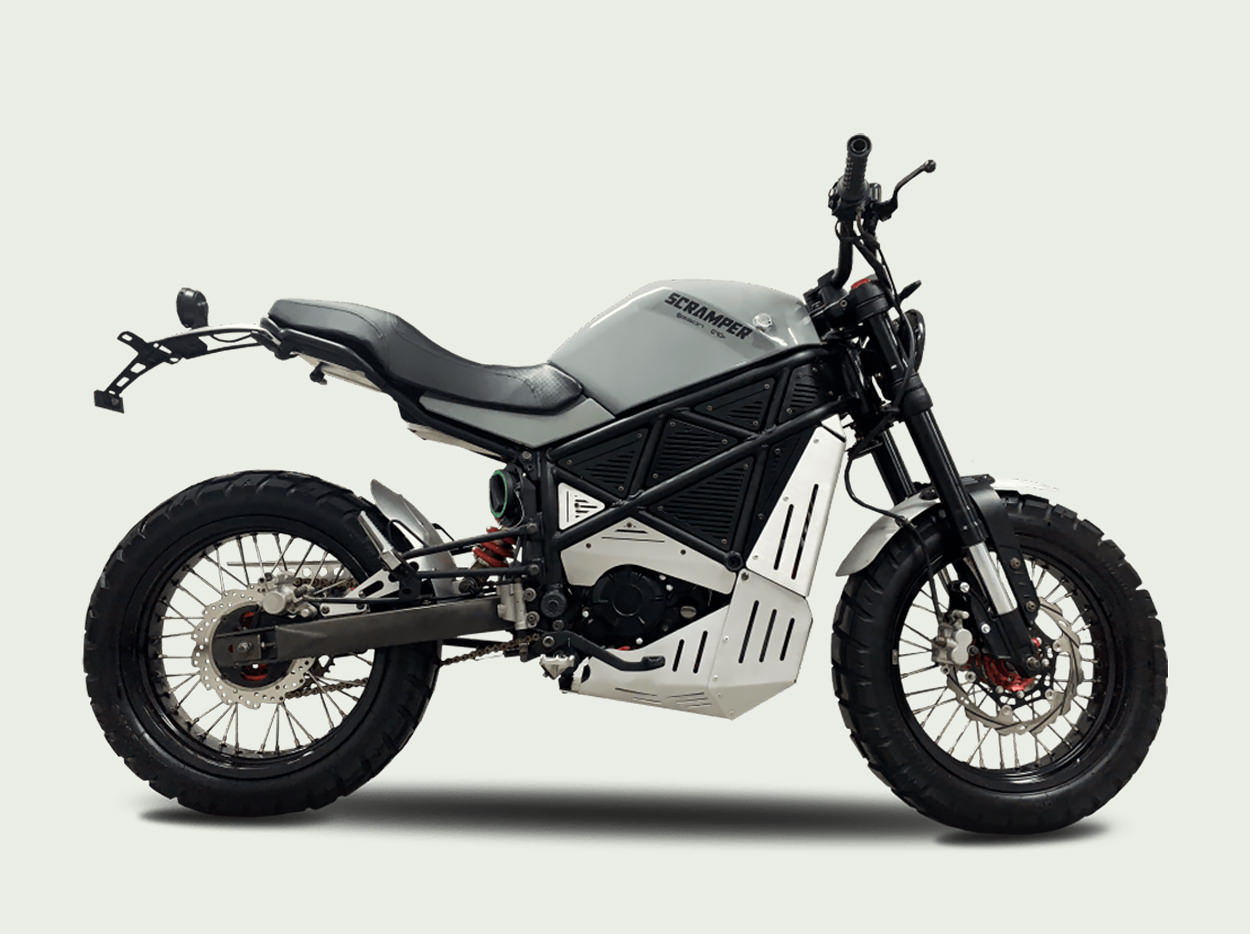 The ScrAmper itself is an intriguing prospect. It’s good looking for starters, styled as a sleek scrambler that packs its electrical components away neatly. Its trellis frame feels decidedly Ducati-esque, and there’s more than a hint of Monster styling in its fuel tank. 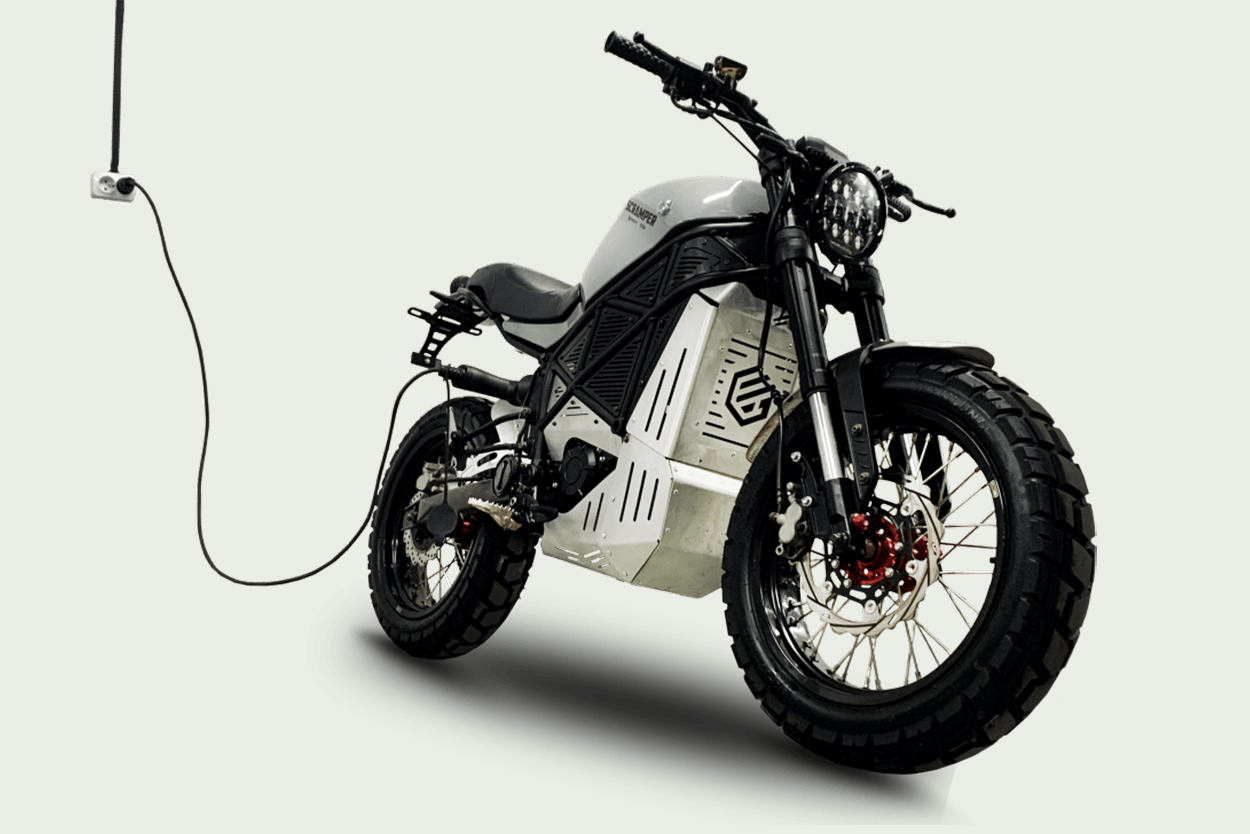 It’s powered by a 9 kW engine that hits peak power at 16 kW, and has a four-speed transmission, which they say works just like a petrol-powered bike’s transmission. It has a listed top speed of 130 km/h [81 mph] and a maximum range of 160 km [99.4 miles], depending on how you ride.

The battery can be charged to 50% in 30 minutes, and 80% in 90 minutes. The charge cable is stored on-board, with an adapter to plug it into public car charging stations. 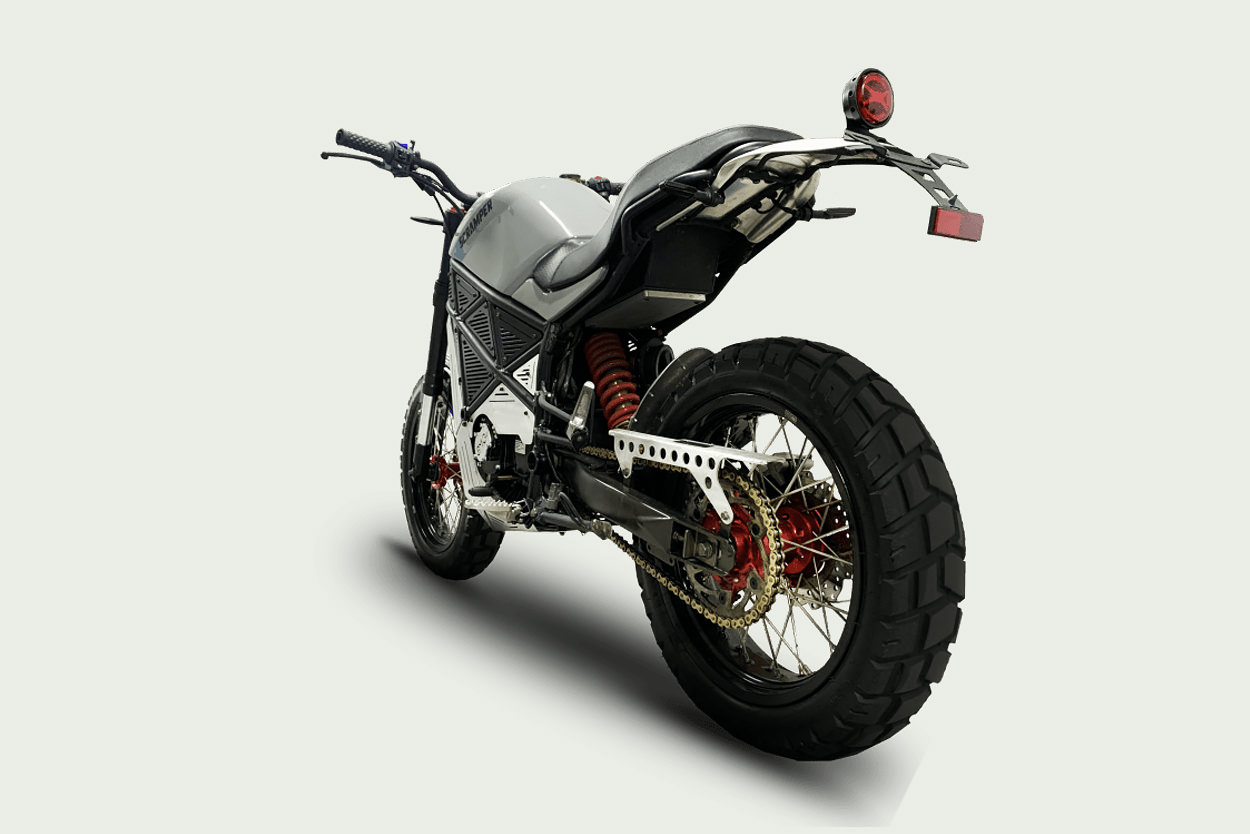 Crowdfunding is always risky business, and war only makes things harder. But we’re hoping the EMGo pull this one off. The ScrAmper looks the business, and we’d love to swing a leg over one to see if it goes as good as it looks. [EMGo ScrAmper | Via]