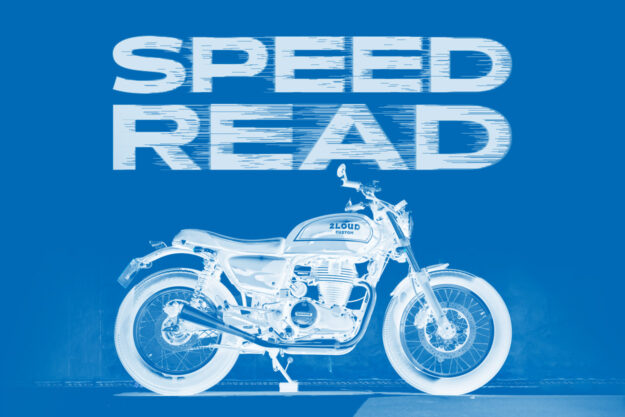 We kick things off with a tasteful Honda CB350 from 2LOUD Custom in Taiwan. Then we take a look at Can-Am’s new electric motorcycle concepts, three retro Kawasaki kits from Japan, and a Honda CBR1000RR-powered BASE jumping bike. Yes, really. 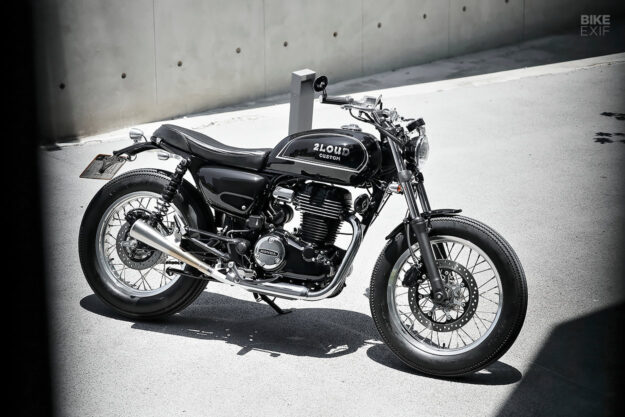 Honda CB350 by 2LOUD Custom I used to have a boss that said that when clients were low on budget, we should skimp on quantity, but never quality. This Honda CB350 from 2LOUD reminds me of that philosophy. Made for a client on a limited budget, it’s more restrained than what we know the Taiwanese shop is capable of—but it’s still a top-shelf build. 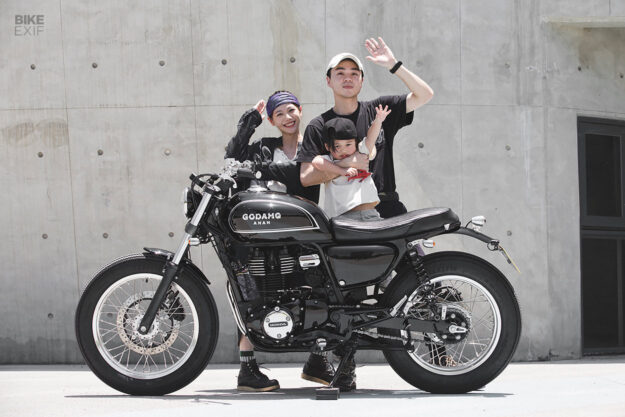 The bike belongs to a young dad that wants to take his kid along on rides, so the petite CB350 was the perfect donor. It’s also a fairly affordable bike that lends itself to customization, so 2LOUD used this opportunity to also design a set of bolt-on parts for it.

2LOUD saved a Buck by keeping the Honda’s stock fuel tank and side covers. The tank sports 2LOUD’s logo on one side, and the owner’s kid’s name on the other, both done by hand by a traditional Japanese tattoo artist. 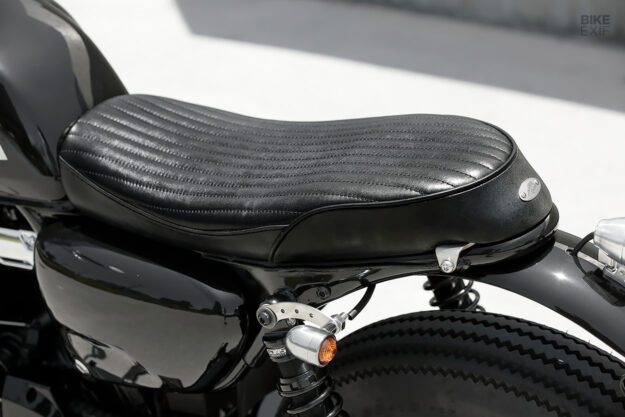 Up top is the first plug-and-play 2LOUD part: the two-up leather seat. The fenders are new ‘catalog’ parts too, as are the adjustable license plate bracket, taillight and chain guard. Front and rear turn signal brackets, and a stylish reverse cone muffler, round out the list.

2LOUD have matched their custom parts to a laundry list of tasty upgrades. A Motogadget speedo sits in a handmade bracket, with a new set of stainless steel flat track handlebars equipped with a Frando brake master cylinder, aftermarket micro-switches and Motogadget bar-end mirrors. 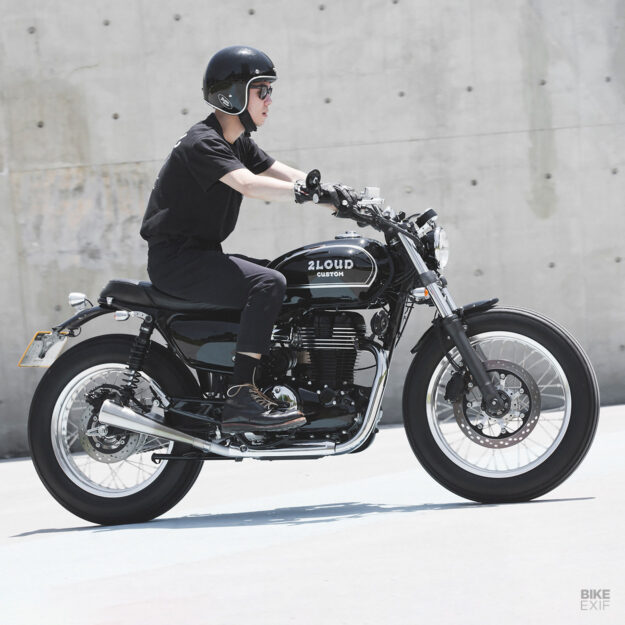 The wheels are new spoked units in the original sizes, wrapped in classic sawtooth treads from Duro. And the rear shocks come from the Taiwanese brand GJMS.

It might not tread bold ground, visually, but this Honda CB350 is as charming as they come. 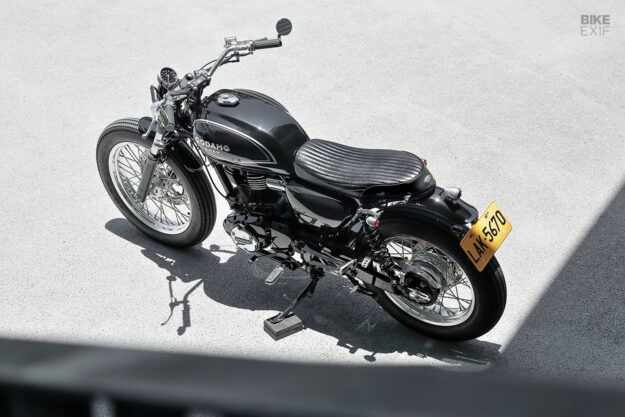 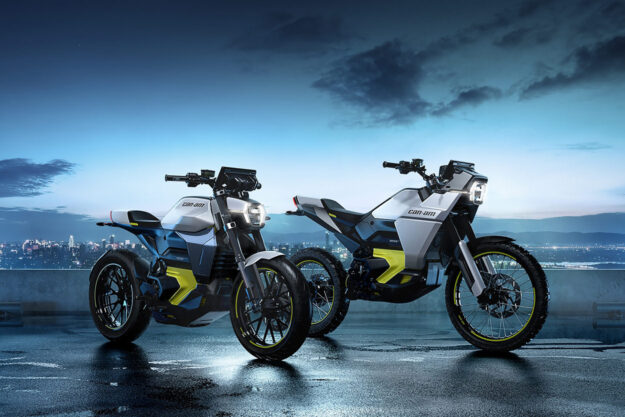 Can-Am’s new electric motorcycles Can-Am is mostly know for its UTVs these days, and for three-wheeled motorcycles like the Spyder. But they used to make regular old two-wheeled bikes too. Back in the 70s, the Canadian company produced a wide range of off-road motorcycles, powered by Rotax engines.

Can-Am is fifty years old this year, so they’re returning to their roots… sort of. They’ve just thrown the wraps off two new motorcycle concepts: the Can-Am Origin dual-sport [above right], and Can-Am Pulse street bike [above left]. And they’re both powered by electric drivetrains. 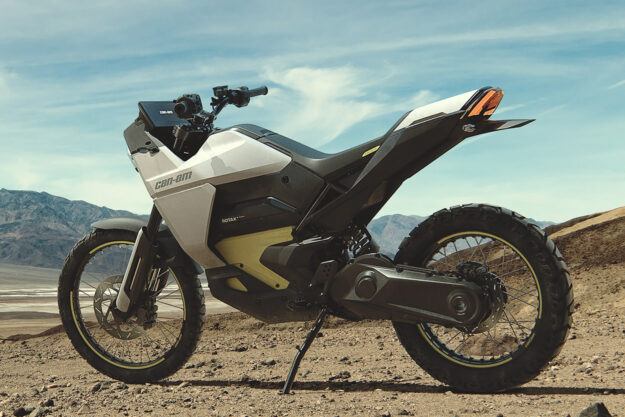 It shouldn’t come as a shock that Can-Am have gone electric though. Their parent company, Bombardier Recreational Products, Inc. (BRP), bought a bunch of assets from the defunct electric bike company, Alta, back in 2019. So it’s likely that some of that tech has made its way onto these new models—or that they’ve used it as a basis for research. 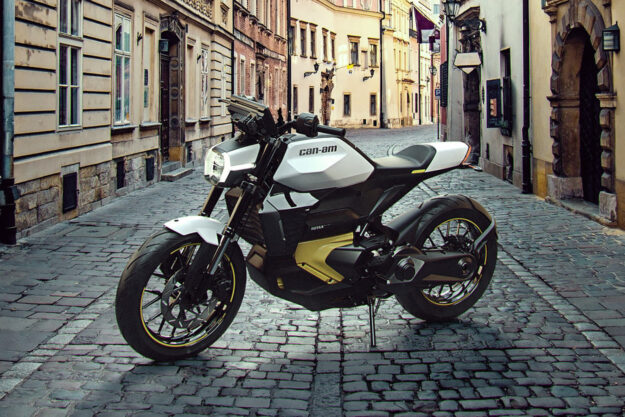 Can-Am’s new bikes aren’t powered by Alta motors though. BRP also owns the engine supplier Rotax, so the Origin and Pulse will be running Rotax’s all-new ‘E-Power’ drivetrain. BRP haven’t said much about it yet, but they have revealed that they plan to roll the same motor out to their UTVs, and the snowmobile and jet-ski brands that fall under their umbrella.

At a glance, both new designs look good, particularly the Origin, which Can-Am has billed as a tribute to their off-road heritage. We’re picking up faint hints of Husqvarna’s Svart- and Vitpilen, but the overall package looks fresh rather than derivative. 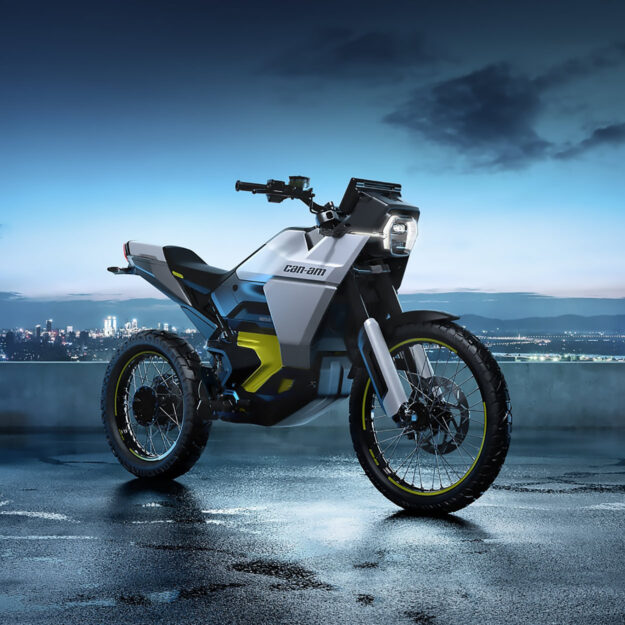 What we’re really curious about is what these will cost, and what sort of numbers they’ll make—but we’ll have to wait another year before we know. [More] 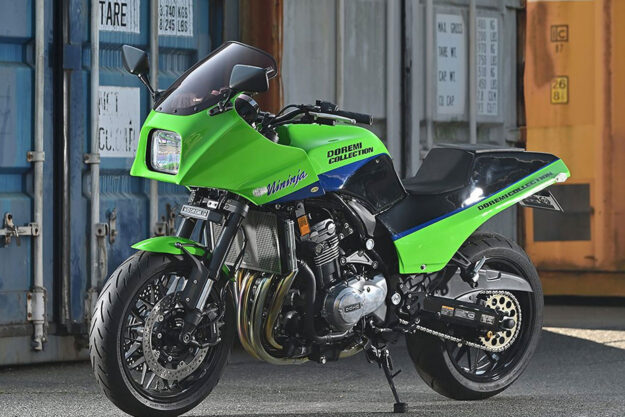 Kawasaki Z900RS body kits by Doremi Collection The Kawasaki Z900RS doesn’t quite get as much love as some other modern classics on the market, which is a shame, because it’s a handsome motorcycle. Now the Japanese parts company Doremi Collection has made the Zed even more retro, with a series of bolt-on kits that emulate some of the most iconic models in Kawasaki’s archives.

All of Doremi’s kit use the same system. It starts with a 14 l [3.7 gallon] fuel cell that uses the Kawasaki’s OEM attachment points, fuel pump and filler cap. Each kit’s fiberglass-reinforced plastic (FRP) tank skin then snaps into place over it. 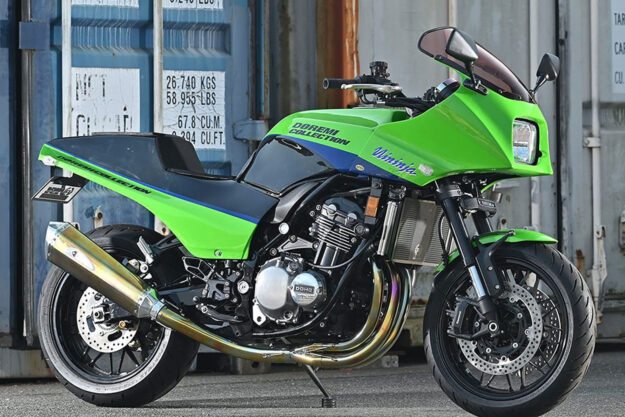 The first kit pays homage to the Kawasaki GPZ900R, as popularized by Tom Cruise in Top Gun. It’s a stunning replica, from its FRP fairing right through to the generous seat cowl. The fairing comes complete with a tinted windscreen and period-correct mirrors, with an H4 headlight up front and a clear taillight embedded out back.

The kit includes all the brackets and fairing stays you need to customize your Z900RS. The bike pictured here also wears retro engine points covers, crash bars and a hexagonal titanium muffler from K Factory. 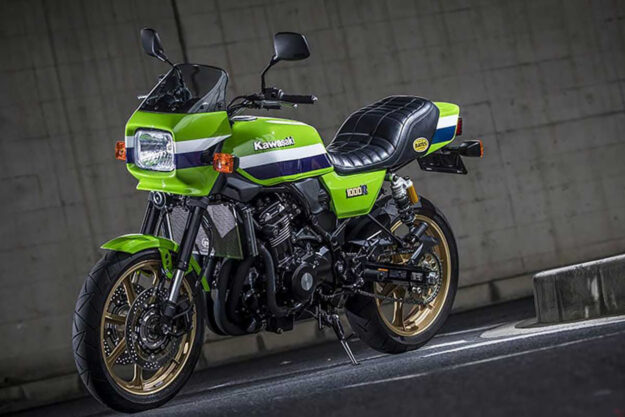 If that’s not quite your pace, Doremi has a killer Eddie Lawson Z1000R kit too. Again, it uses an FRP tank cover and fairing, with the necessary fairing mounts included. Out back is a generous twin seat, running over a classic ducktail-style tail cowl.

Doremi have even gone as far as to add a pair of Öhlins piggyback shocks. But take a closer look, and you’ll notice that they’re just there for show—the Z900RS mono-shock is still in play. The front fender, turn signals and taillight all come from elsewhere in Doremi’s catalog of parts. 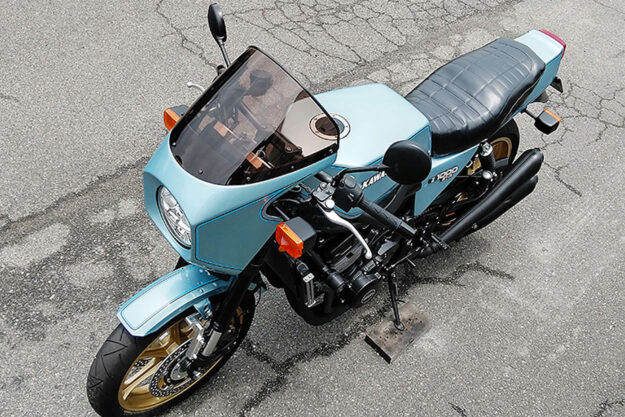 Then there’s the company’s take on the Kawasaki Z1-R—Kawasaki’s attempt at a factory café racer. The blocky bodywork is a dead ringer for the vintage Z1-R, and is even finished in the same pale blue paint job.

Other stand-out items include a pair of gold Morris replica wheels, and boxy lighting that recalls the era perfectly. Like the Lawson kit, the Z1-R also wears a faux rear shock kit. 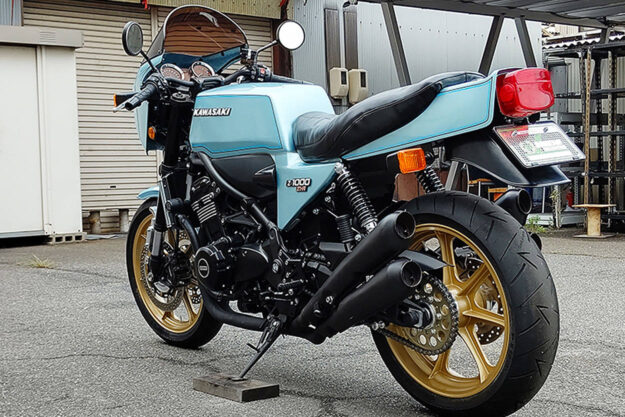 If you’re after a contemporary bike with even more retro styling, a Z900RS with one of these kits wouldn’t be a bad way to go. [Via] 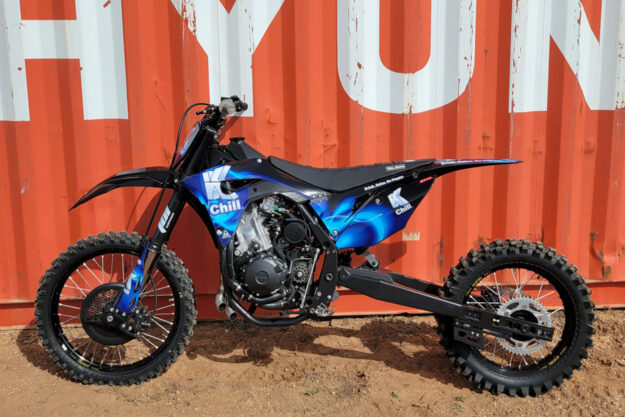 Honda ‘CRF1000RR’ BASE jumping bike BASE jumping is the act of parachuting from fixed objects; MotoBASE jumping is doing it with a motorcycle. Colorado’s Bradley O’Neal is a pioneer of this insane sport, so he’s developed a special 170-plus horsepower bike to do it on.

This mad machine was built by Nate Engle at IndeeSource, with the support of Bradley’s sponsor, K-Chill. It’s been designed to fly up impossibly high dunes to launch Bradley into the air, but it’ll also double up as a competitive hill climb bike too. 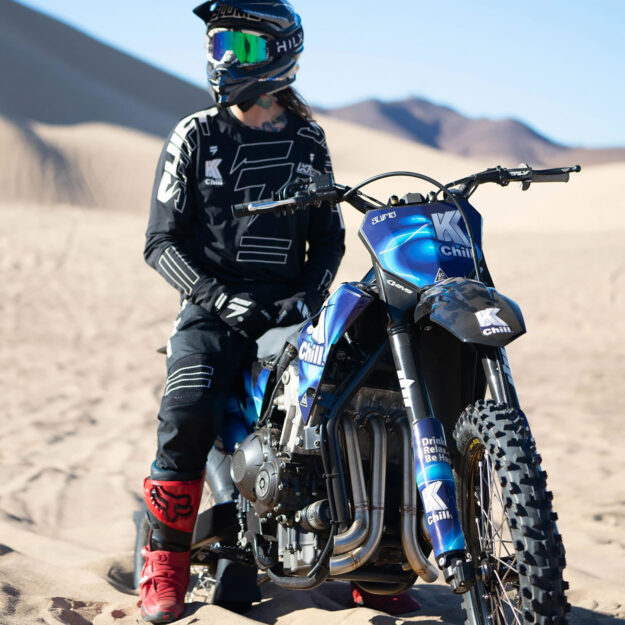 It’s powered by a 2014 Honda CBR1000RR Fireblade motor, although the engine’s not quite stock. It runs with everything from a Dynojet tuner to a custom intake plenum that’s designed to accommodate secondary injectors. The radiator comes from a KTM 450SX, and has been modified with dual fans and custom lines.

The engine’s held in a CAD-designed space frame, fabricated from chromoly tubing. It’s matched to a modified and reinforced subframe from a Honda CRF450. The extended swingarm is custom, and uses a link-less shock mount. 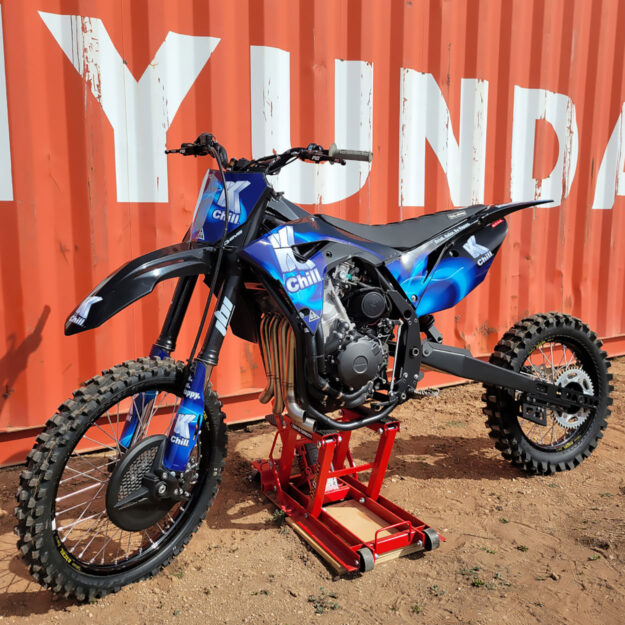 Other custom parts include the fuel tank, and the TIG-welded stainless steel exhaust headers. The suspension consists of a set of tuned KYB forks, with a WP Suspension shock at the rear. The wheels were pieced together from Dubya, Excel and Talon parts.

Up front are a set of XTRIG yokes, gripping a set of Mika Metals handlebars with the original CBR controls. The plastics and seat are CRF450 parts, with a new seat cover from Thrill Seekers.

It’s a crazy bike for an even crazier sport. Bradley’s documented the whole process in a series of videos; we’ve embedded the first episode below for your viewing pleasure. [More]