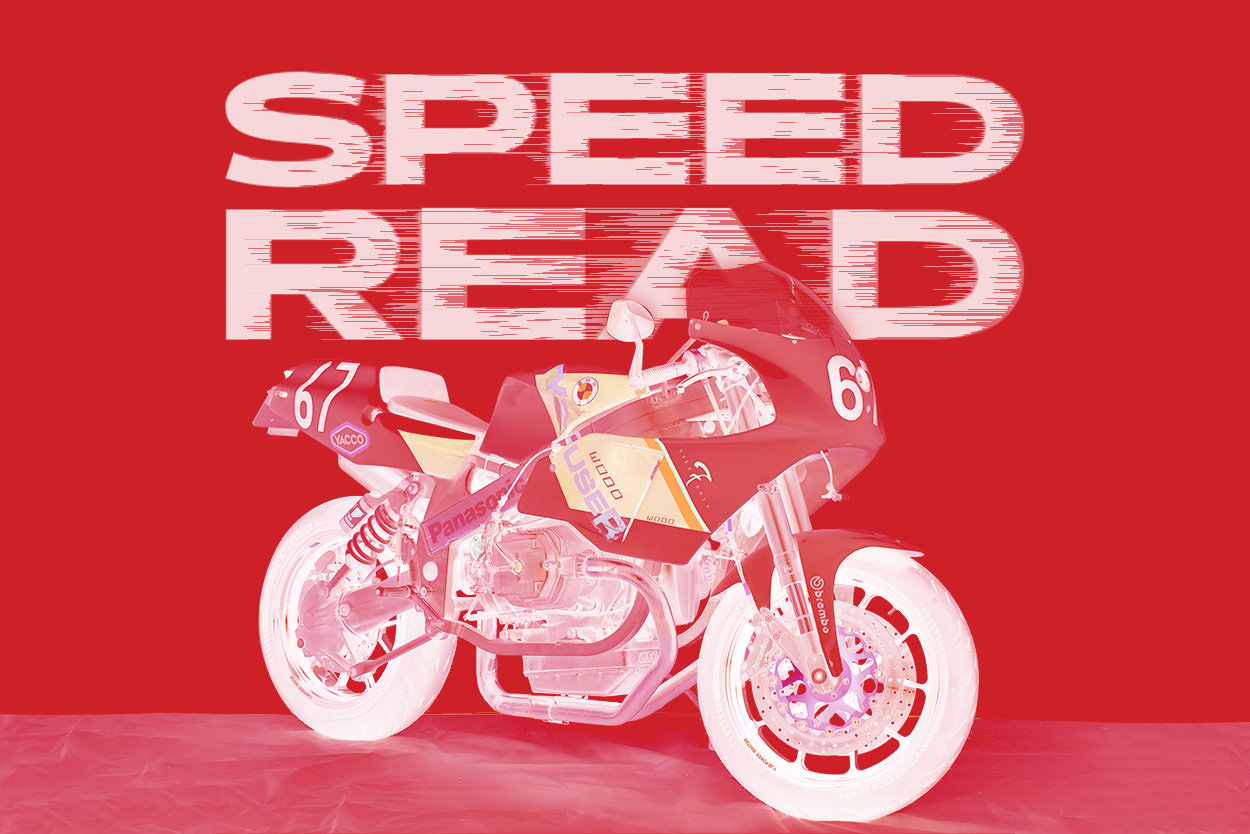 We’re kicking things off with something fast this week: a race-bred BMW boxer that’s been made street legal. We’ve also got a trials-style Royal Enfield from Los Angeles, an electric speedway bike from Denmark, a folding scooter from the 60s, and rumors of a new modern classic from Kawasaki. 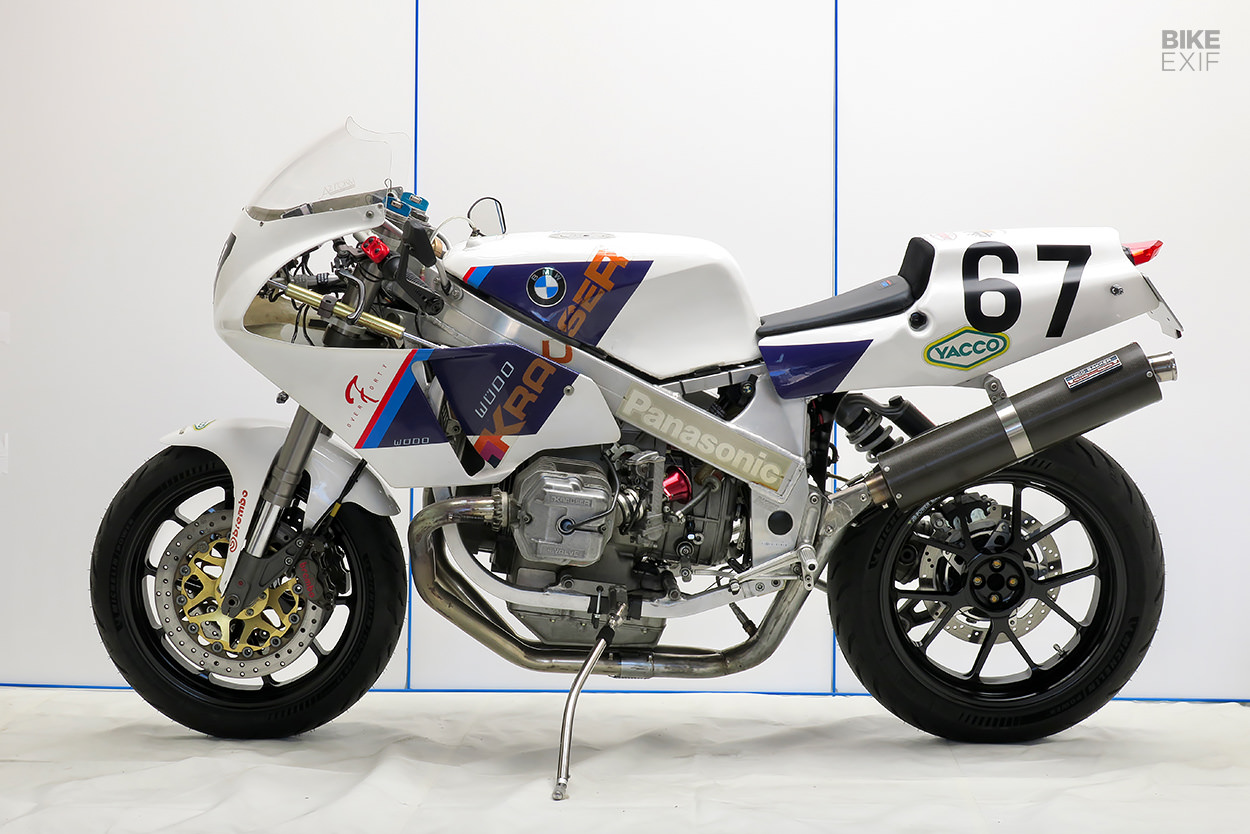 BMW Boxer racer by Boxer Moto These days, classic BMW cafe racers are a dime a dozen. But how about a custom-built boxer-powered race bike, loaded with top-shelf parts, that’s been made street legal? That’s more like it.

This unique machine belongs to Eiichi Tanaka in Japan, and was built by Koji Yamauchi at the BMW specialist shop, Boxer Moto. Tanaka-san first raced the bike in 1993—but at 67 years old, he’s left racing behind him. So he’s converted it for street use, turning it into one of the most over-qualified cafe racers we’ve seen. 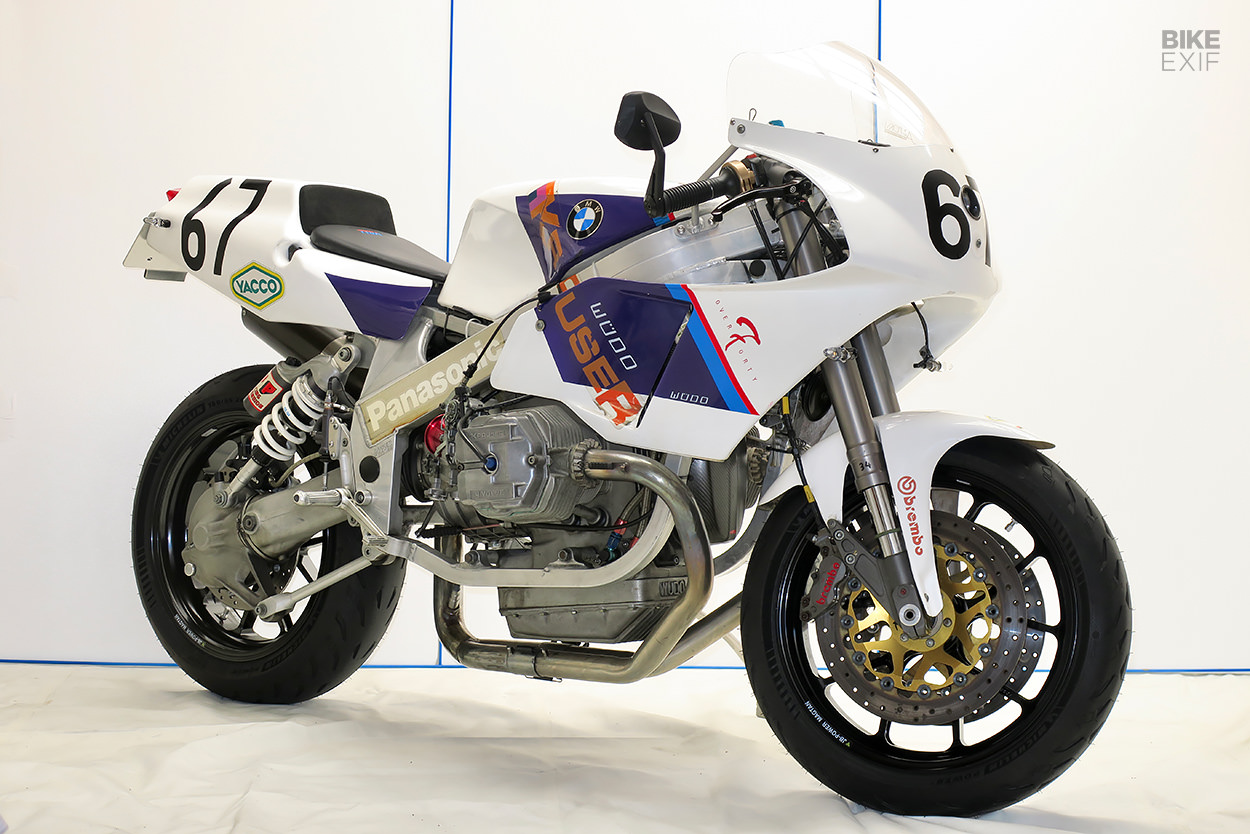 The bike’s built around a frame from the Dutch frame maker, Bakker, featuring square aluminum sections for rigidity and lightness. The motor’s a 980 cc unit with rare Krauser four-valve heads, an Edelweiss camshaft and 39 mm FCR carbs. It makes 84 hp and 88 Nm, and sits high in the frame for extra cornering clearance. 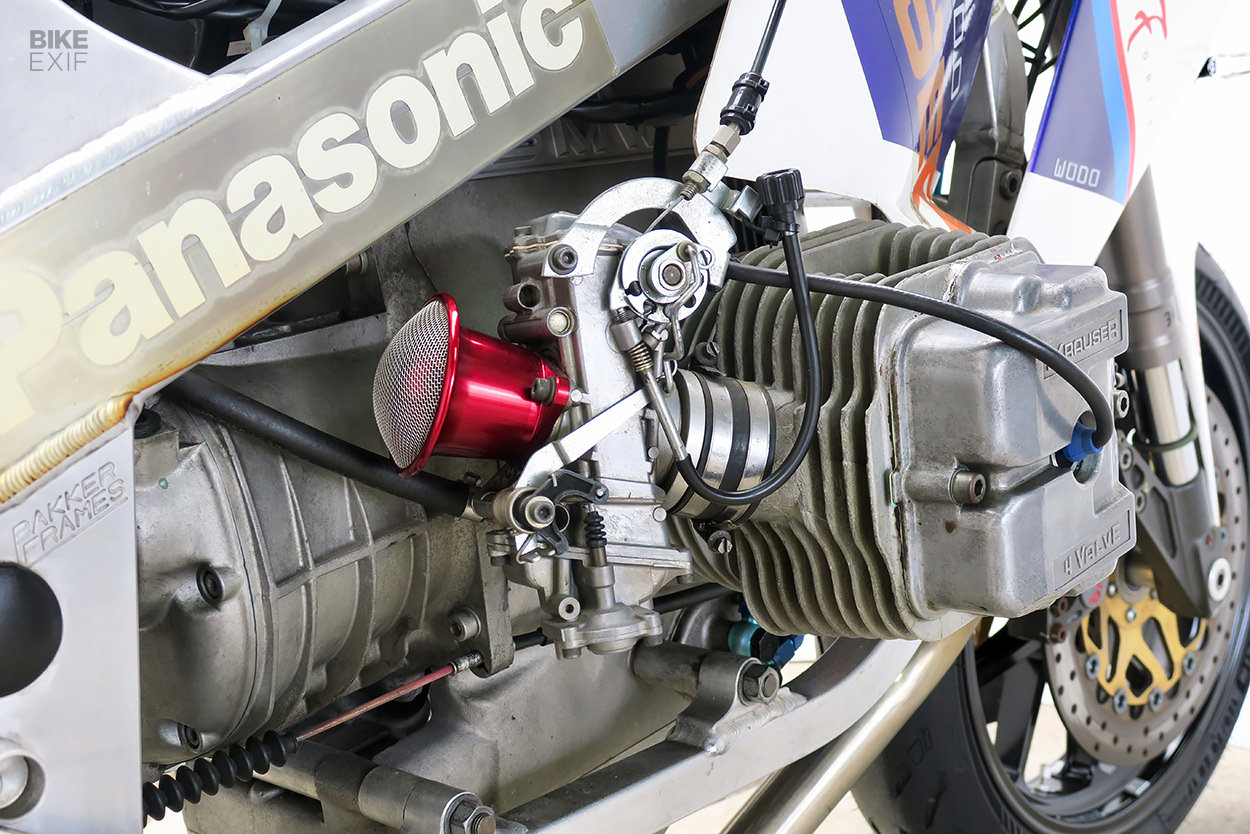 Power’s sent to the back wheel via a Paralever final drive-slash-swingarm, hooked up to a WP Suspension shock. The wheels are 17” JB-Power Magtan units, with fully adjustable upside-down forks up front. There are modern Brembo brakes at both ends too.

Tanaka-san hasn’t revealed where the bodywork is from, but we’re loving the retro endurance racer vibe it’s giving off. 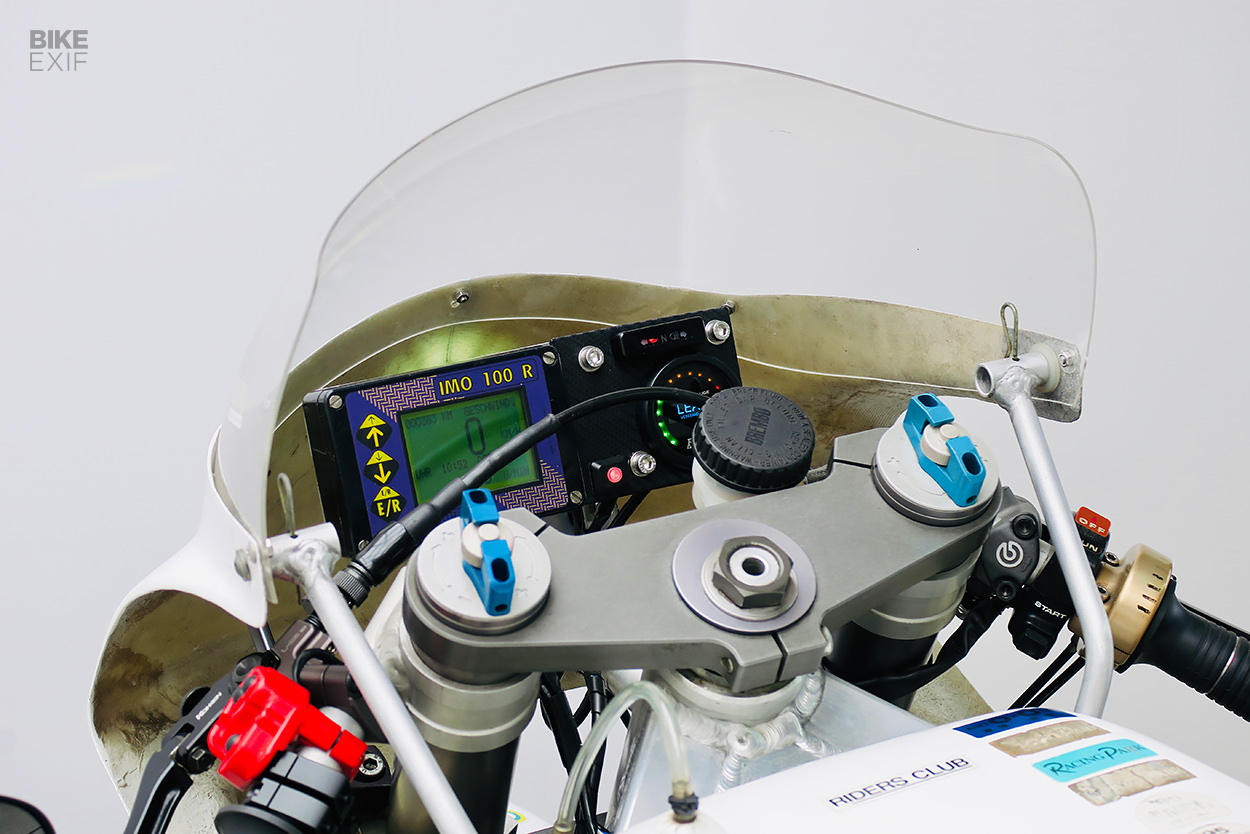 Other than the prominent taillight, the street legal accoutrements are mostly subtle. There’s a small headlight poking out the fairing, slim bar-end mirrors, and the tiniest of LED turn signals mounted at both ends. Behind the fairing is a Touratech IMO 100 R speedo—a part that’s usually used on rally bikes.

We’re willing to bet that Tanaka-san’s BMW has a million stories to tell from on the track. But it’s heartwarming to know that it’s now being let loose on the street too. 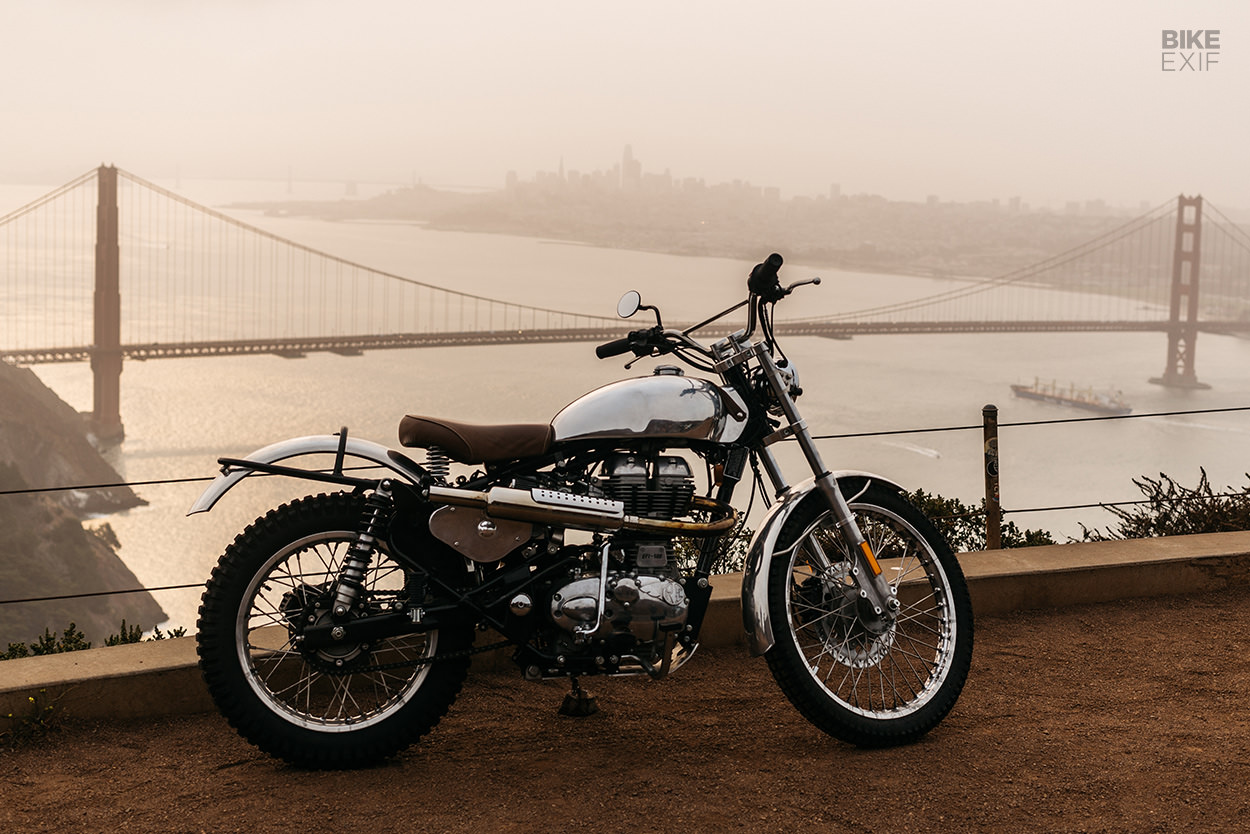 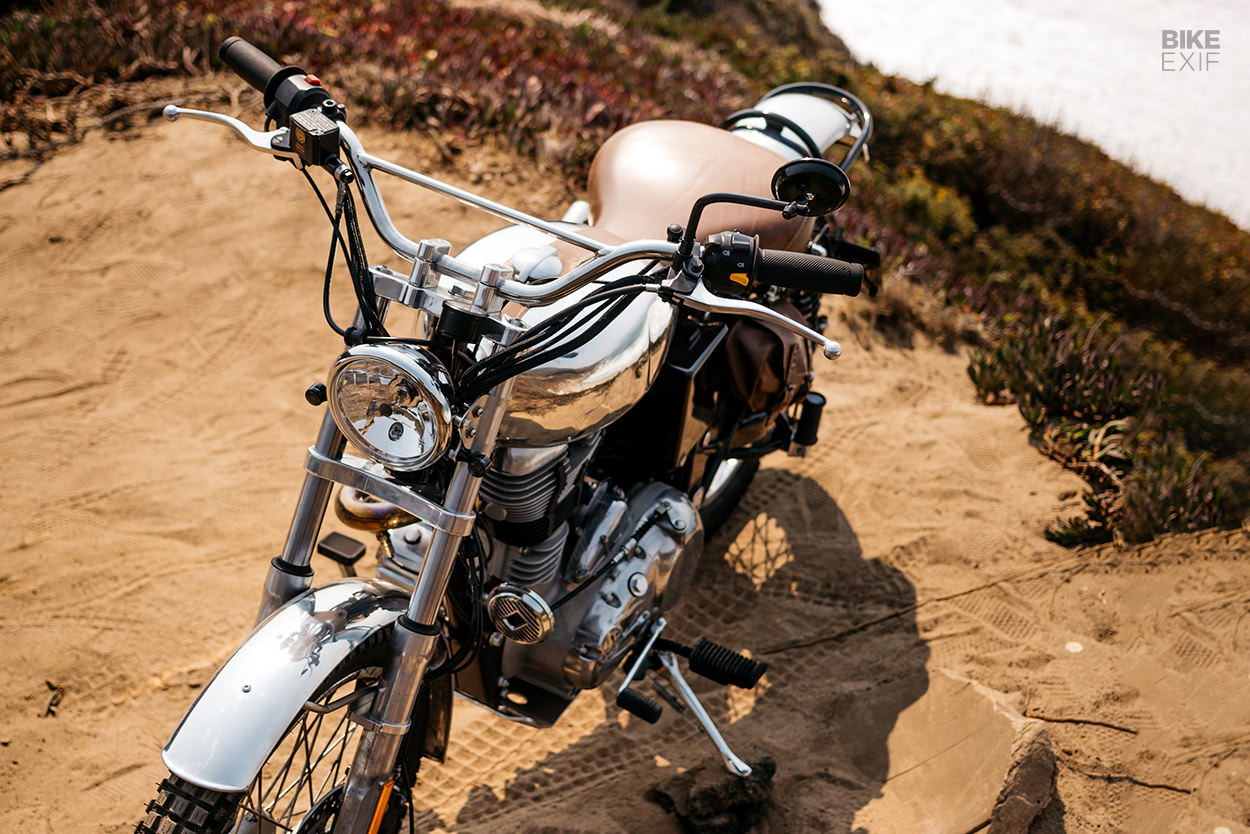 The main goal here was to shave weight off—both visually and physically. BAAK swapped the fuel tank for a slimmer aftermarket unit, and the steel fenders for a pair of aluminum items from their HQ in France. There’s a new seat too, wrapped in an aged brown leather.

The wheels were re-laced with 21F/18R aluminum rims, for better off-road handling and a wider tire selection; a set of Shinko SR241s is currently fitted. BAAK also removed the front fork covers, and have installed a pair of Shock Factory shocks at the back. 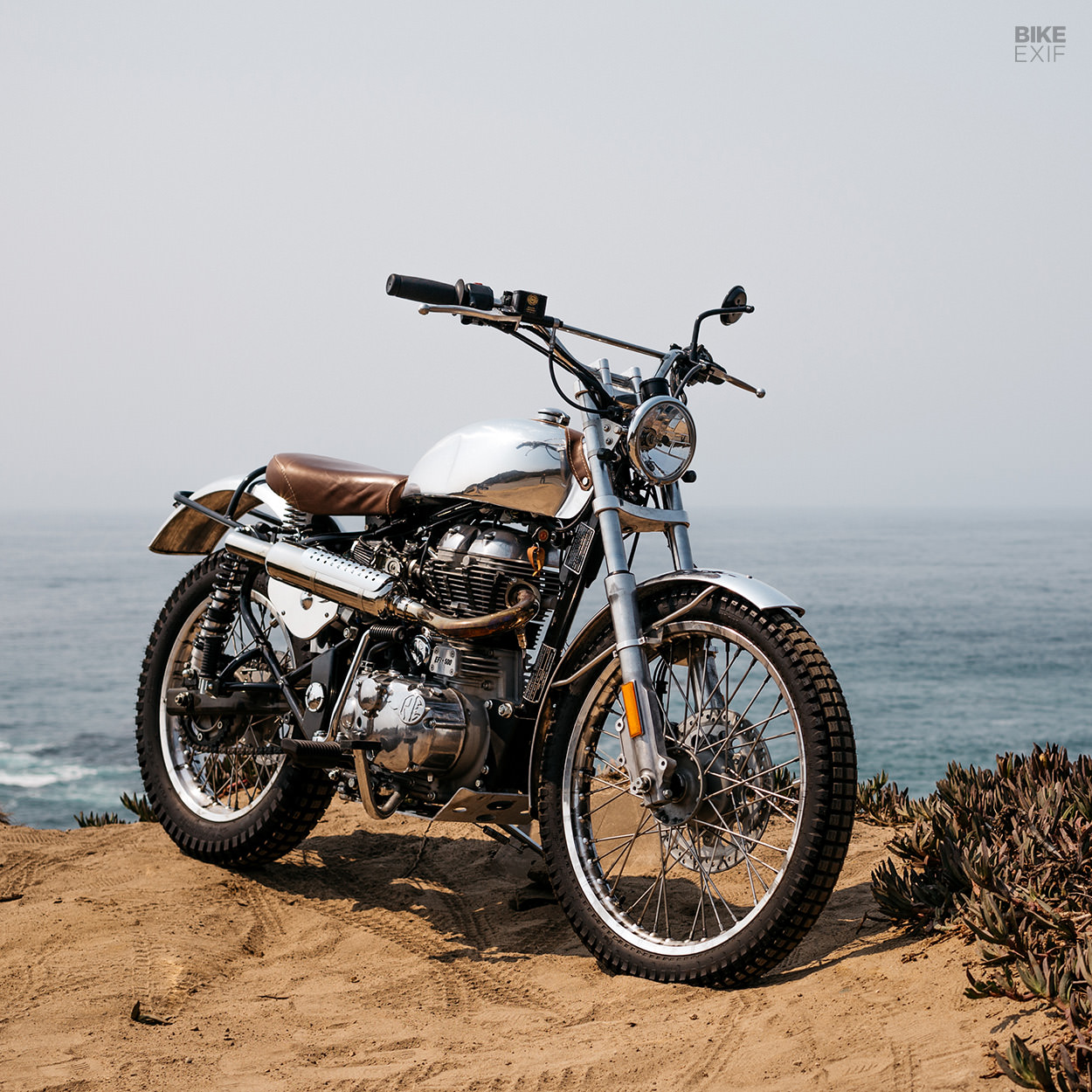 The crew also added a high-mounted single exhaust, and swapped the airbox for a pod filter. The Enfield’s original side ‘boxes’ (usually found under the seat) are gone—the right side now features an alloy side cover, and the left a leather bag that holds the electrics.

Up in the cockpit is a new machined top yoke, with a wide set of scrambler bars. There’s a new headlight out front with a Motogadget speedo higher up, and both are mounted on custom-made brackets. The ignition now sits below the tank, and there’s a pair of Highsider combo LEDs performing taillight and turn signal duties out back. 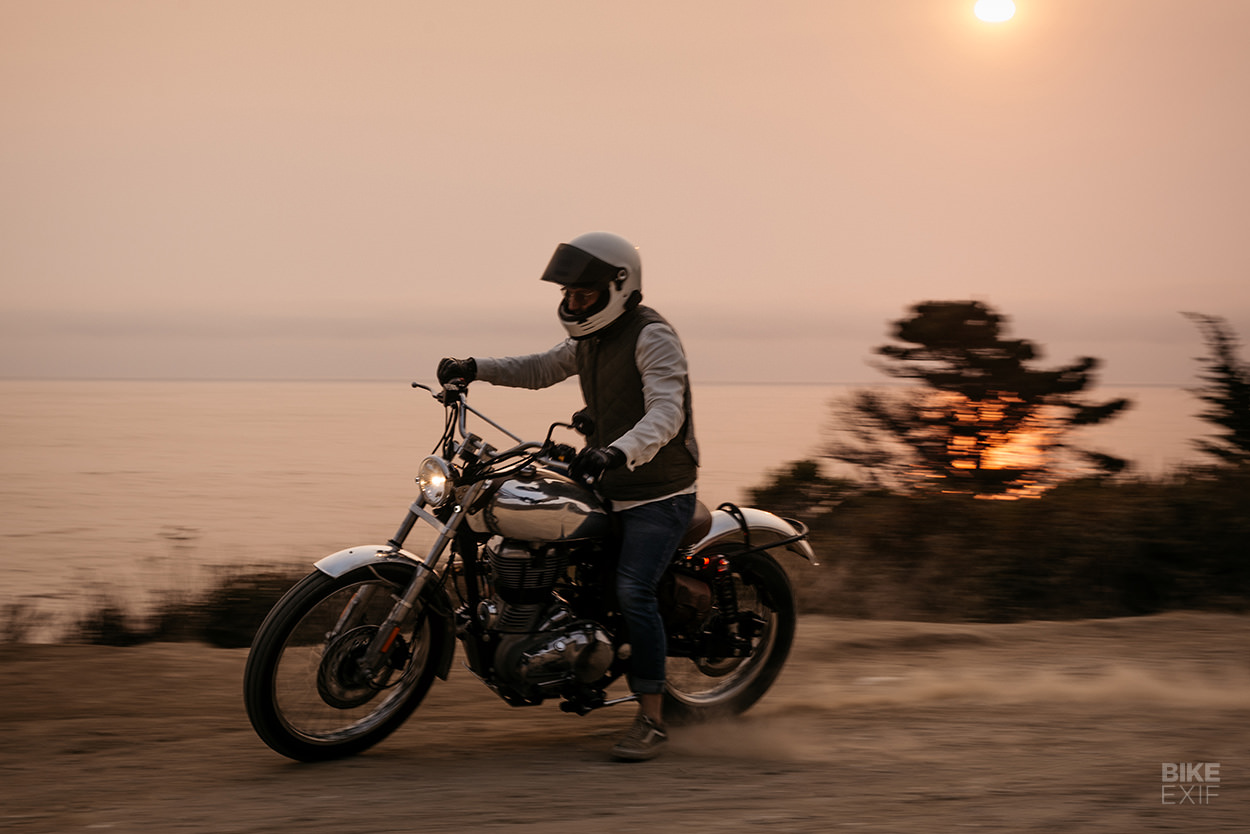 BAAK estimates a weight saving of 80-100 lbs—which is plausible when you consider the weight of the Classic 500’s OEM trim. It looks a lot sharper too, pictured here on a jaunt in and around San Francisco. [BAAK USA | Images by Viktor Radics] 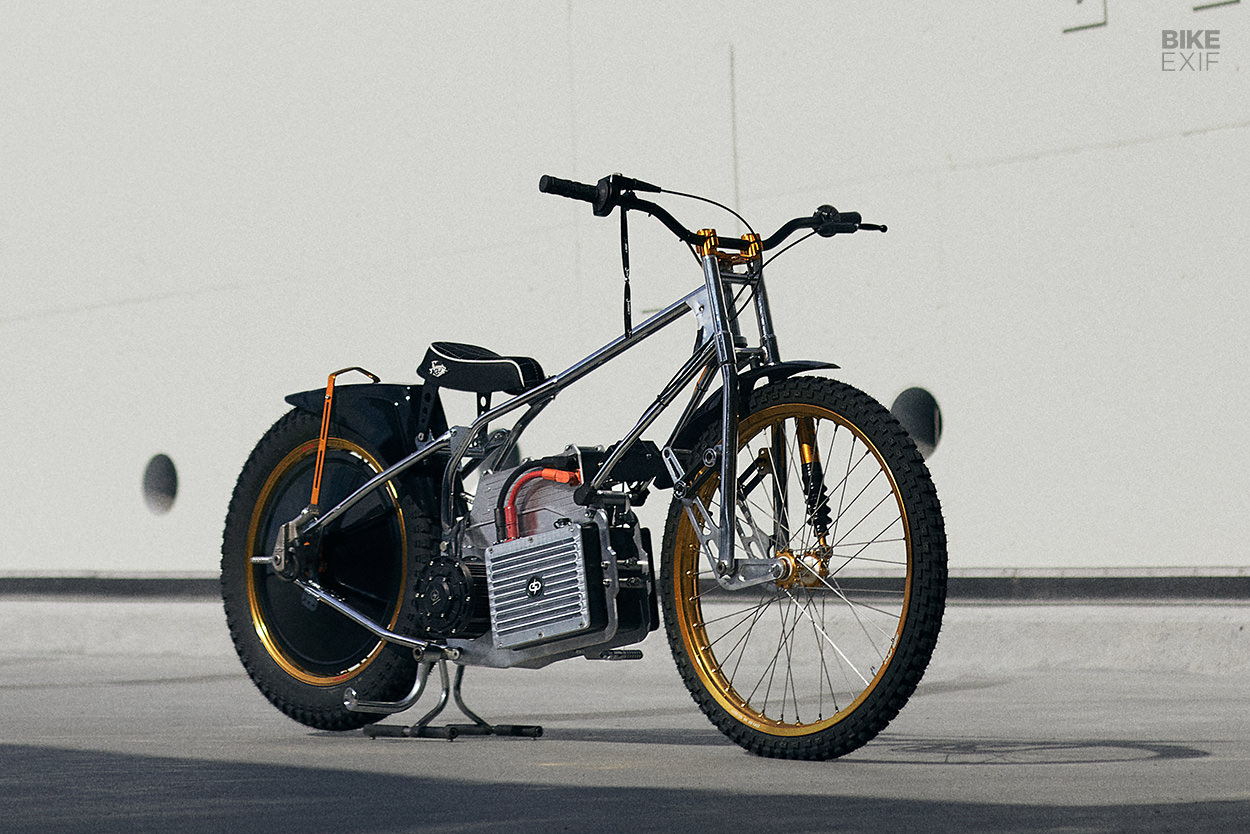 Electric Speedway bike Michel Riis is a former Danish flat track champion, an ex-Yamaha designer, and co-founder of the startup electric bike company Switch. He’s also passionate about speedway racing—a sport that isn’t quite enjoying the popularity it once did.

“I have a huge love for speedway,” he tells us, “and some of my best years were at the track with my late dad. But speedway is a dying sport in most of Europe now. Tracks are closing and the sport can’t attract new riders.” 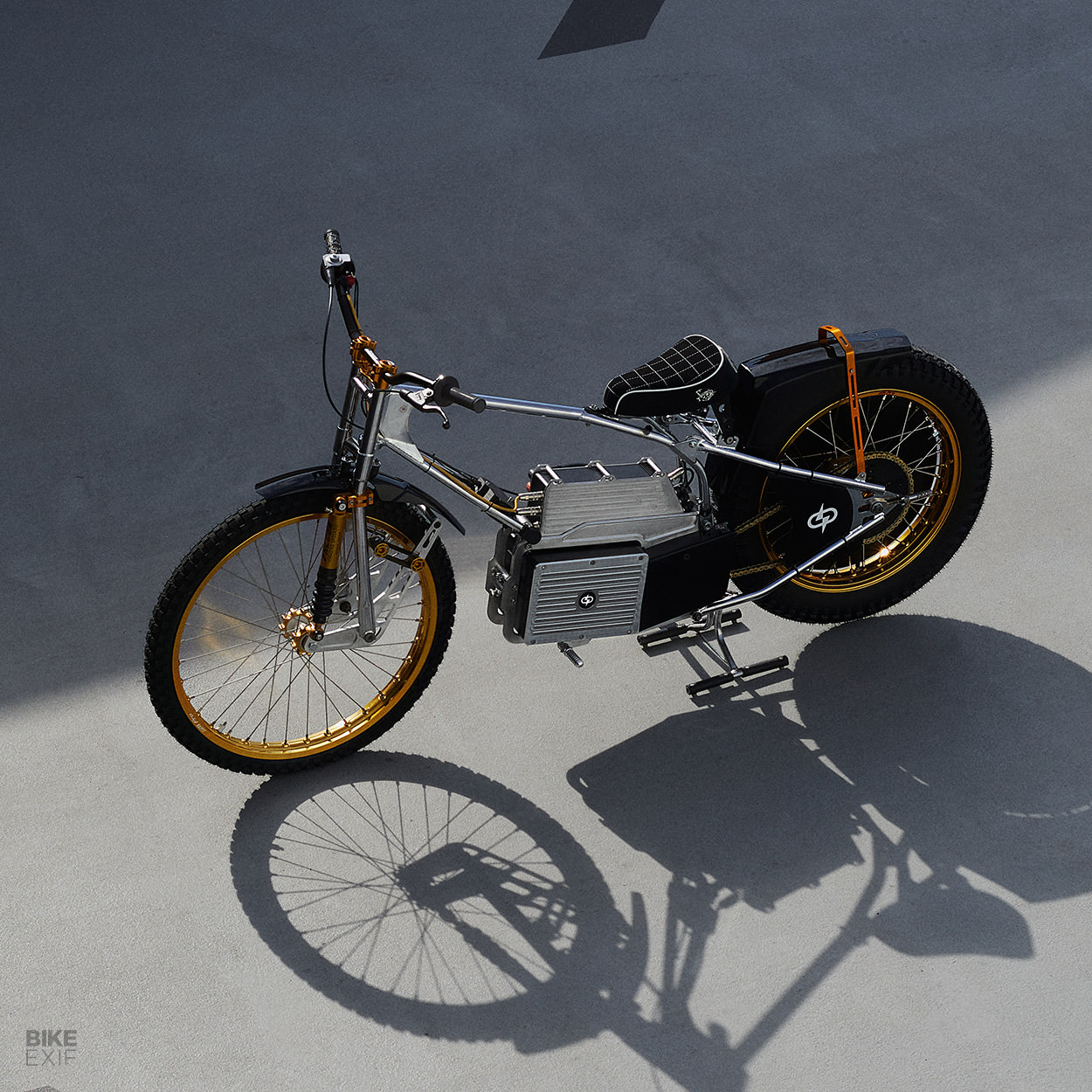 “The reason might be the complexity of combustion engines and the huge cost of maintaining them. The clubs in Denmark can’t even get enough riders to have more than one team. We are on a mission to change that.”

Michel’s plan is a clever one. Under the name Espeedway, he’s developed an electric drivetrain kit that can be retrofitted to a regular petrol-powered speedway race bike. Working with existing bikes helps to keep the costs down—especially if you’ve got an old speedway bike with a blown motor gathering dust in the shed. 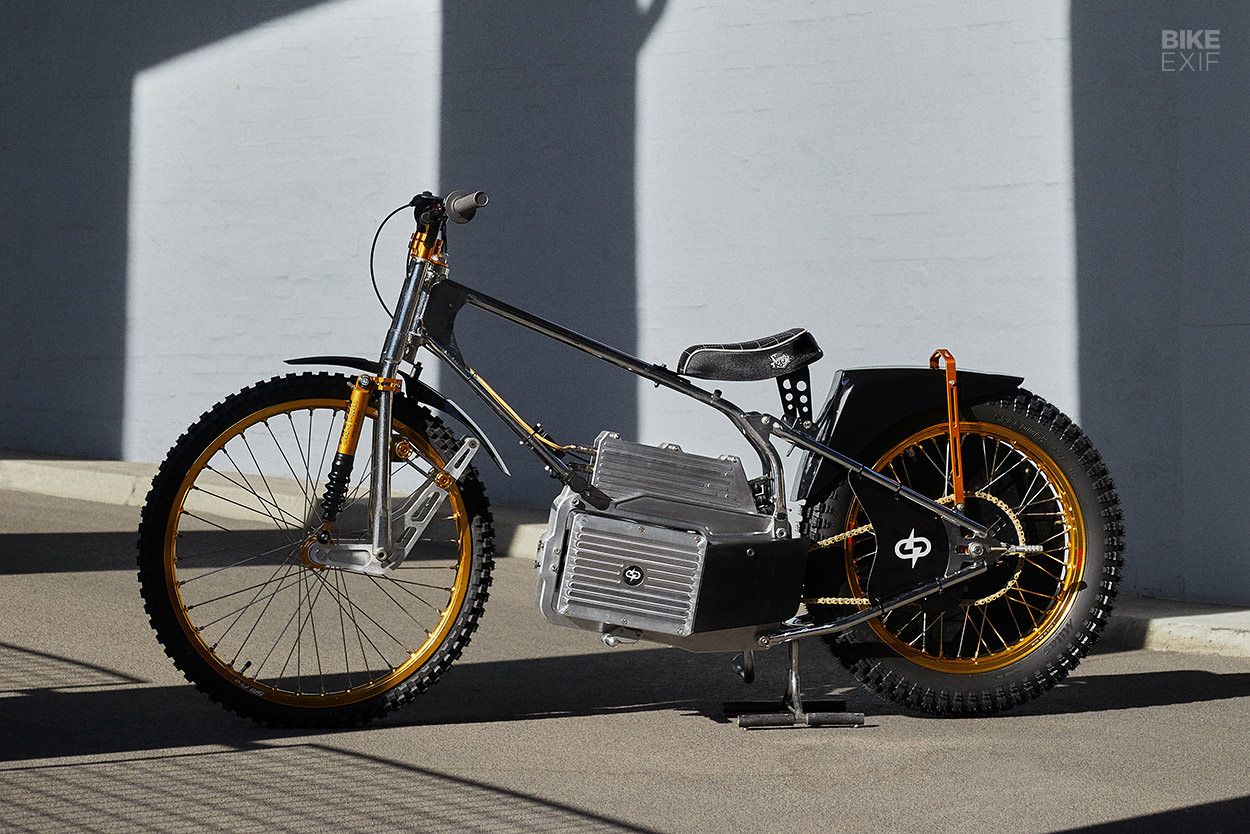 But the big hook here is that Michel and his partners are targeting younger riders. The electric motor can be tuned to alter its power output or fitted to another chassis—so you can keep the same drivetrain as you move up through classes. The bike pictured here makes roughly 30 kW and 90 Nm, with enough charge for five to ten heats.

“The next generation doesn’t care about noise or smell,” he says. “All our test riders had fun and an ‘e-grin’ after racing our bikes.”

This bike’s just been raced at an official FIM youth racing camp in Germany, and Michel has aspirations of running an indoor series in Denmark in winter. Oh, and these components can be fitted to flat track bikes, too. [Espeedway on Facebook | Photos by Frederik Vohnsen] 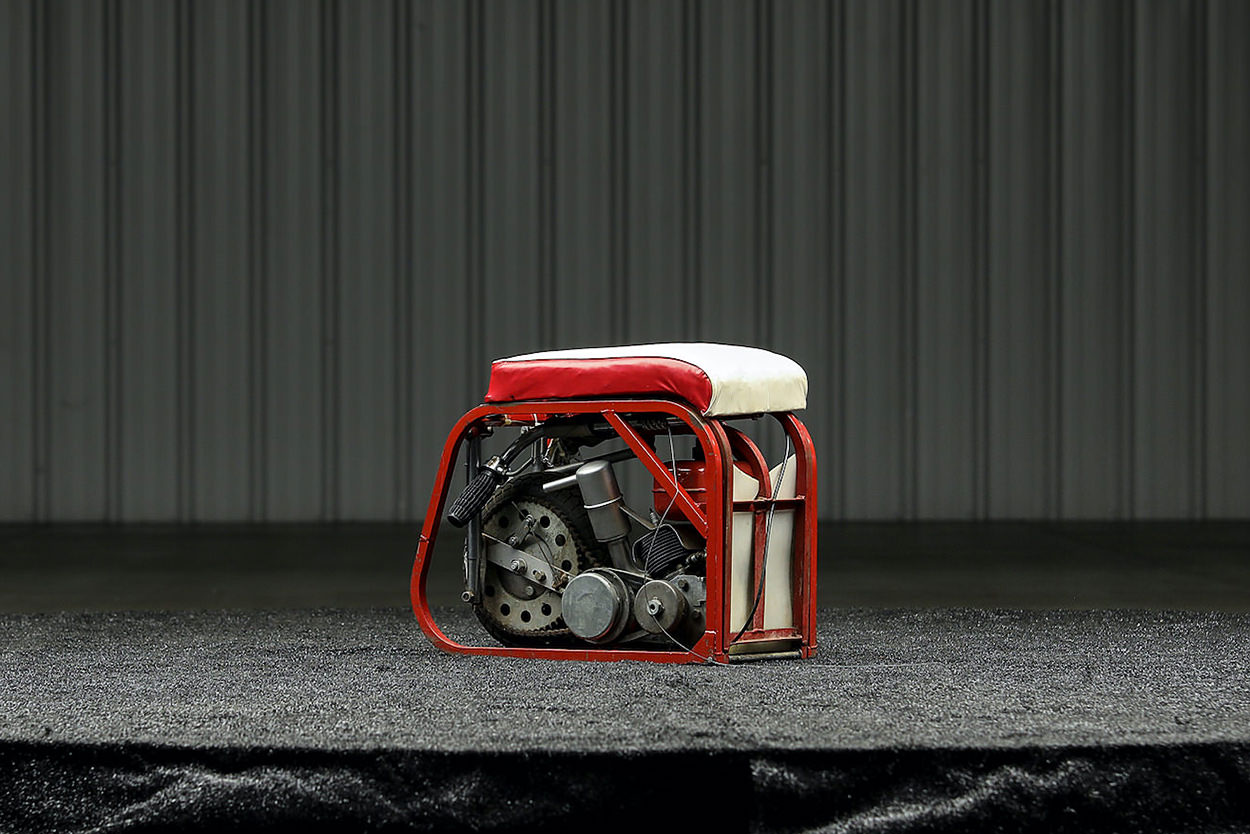 Fuji Go Devil folding mini scooter Here’s something you don’t see every day. Manufactured in the 1960s by Fuji Industries in Japan, the Go Devil was a folding mini bike, marketed as a ‘suitcase motorcycle.’

It came with its own carry bag, and was pitched as a personal vehicle that you could take on a plane, and then unfold on the other side. That was, of course, a ridiculous notion—the Go Devil was more likely to be taken on camping trip than a flight.

Assembling the Go Devil wasn’t exactly rocket science, and could be done in about a minute. All you had to do was fold out the front bit, secure the central brace, click the handlebars into position, rotate the rear wheel into place, and attach the separate front wheel.

The scooter itself was pretty average for the time, with a 50 cc two-stroke single and a centrifugal clutch. It did have rear suspension though, which was uncommon for a minibike back then. 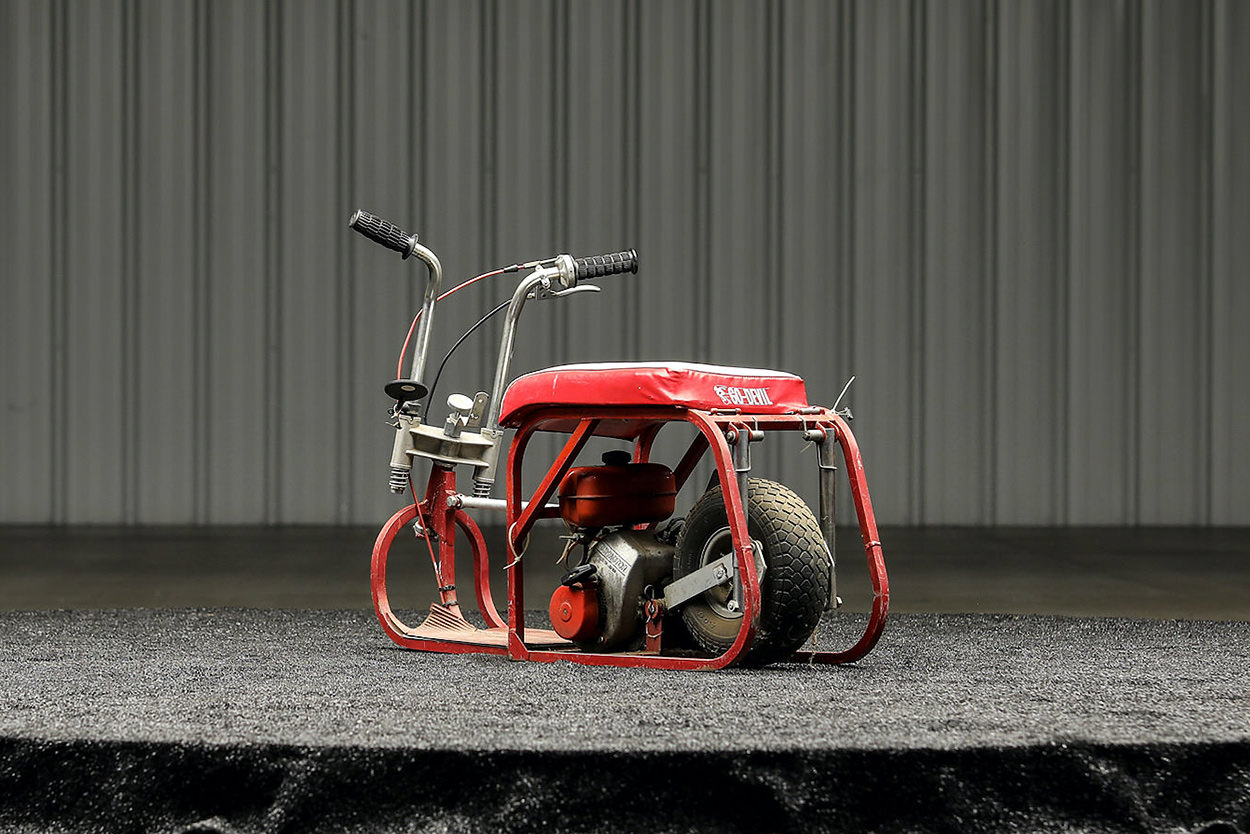 Like many things, the Go Devil is appreciated more now than it was then. It was reportedly not very expensive or considered particularly valuable, so there aren’t many left. Worldwide Auctioneers have two though, and will be auctioning them off soon.

Both examples seem mostly complete, but both are missing a crucial component: their front wheels. Still, it should be easy enough to find a suitable substitute, and restoring a minibike can’t be that hard… right? [More] 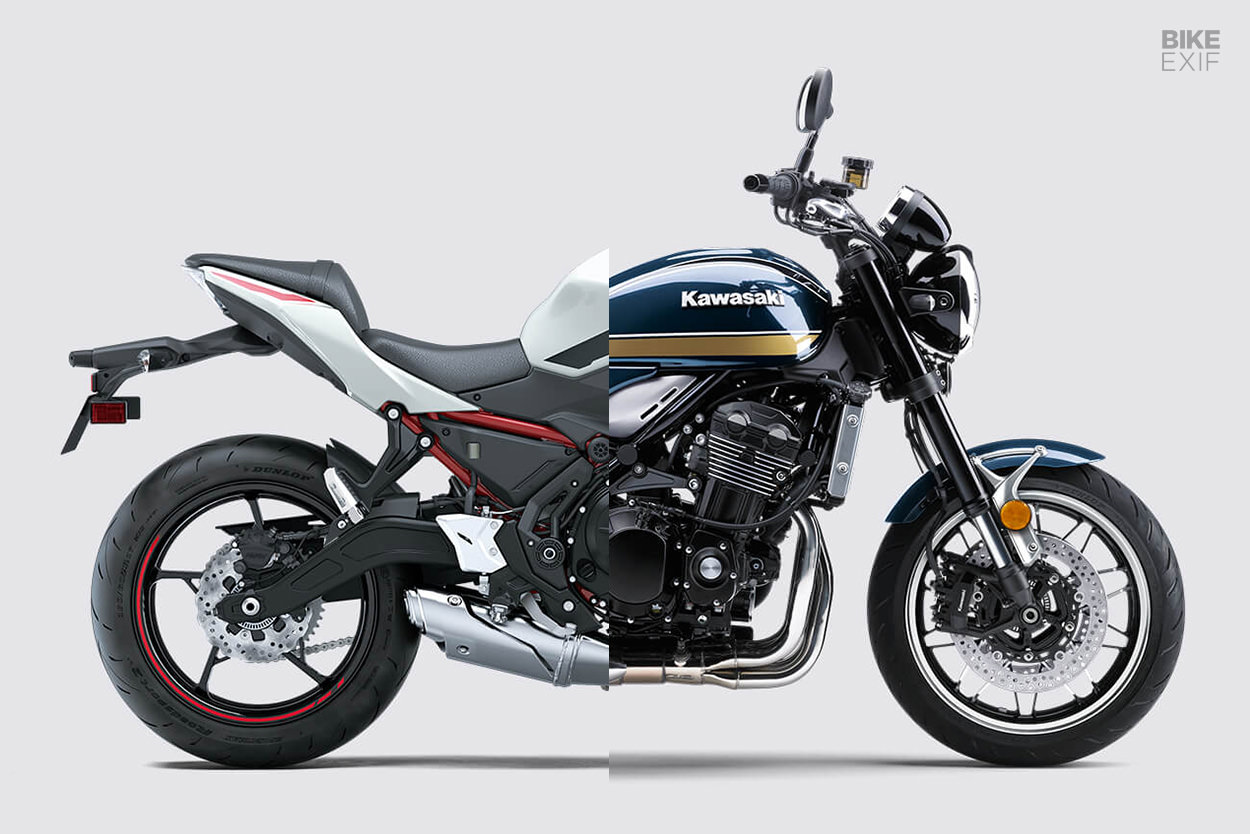 Is a Kawasaki Z650RS coming? Kawasaki are teasing a new retro motorcycle, and a couple of outlets are speculating that it could be the rumored Z650RS. All the Japanese marque has revealed so far is a 17 second teaser video [below]—but the open face helmets and cringe-worthy ‘Retrovolution’ tagline seem like obvious hints.

Of course, we could be wrong, and Kawasaki could be brewing up something else entirely. What do you think?