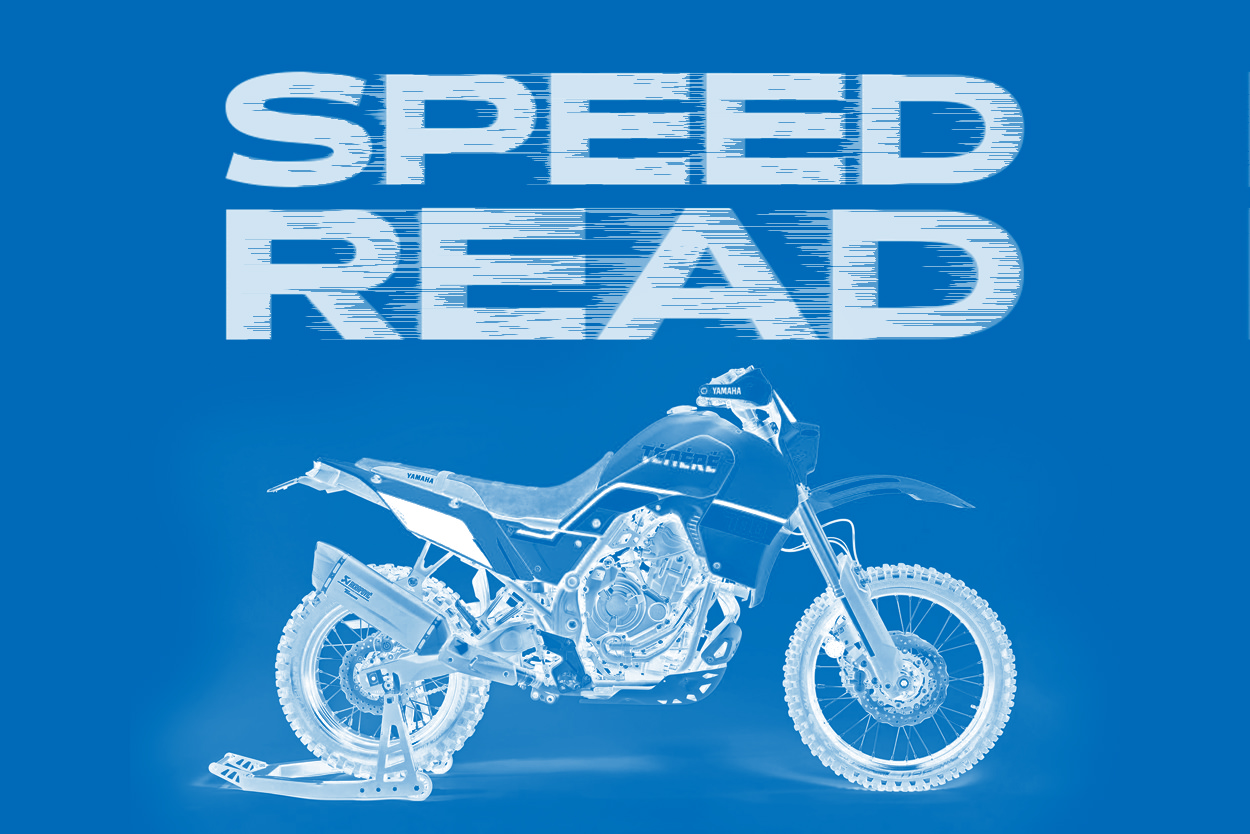 Our final Speed Read for the year is all about kits—for Moto Guzzis, Royal Enfields and Yamahas. Plus a considerably more expensive offering from the boutique American manufacturer Curtiss. You pays your money and you takes your choice. 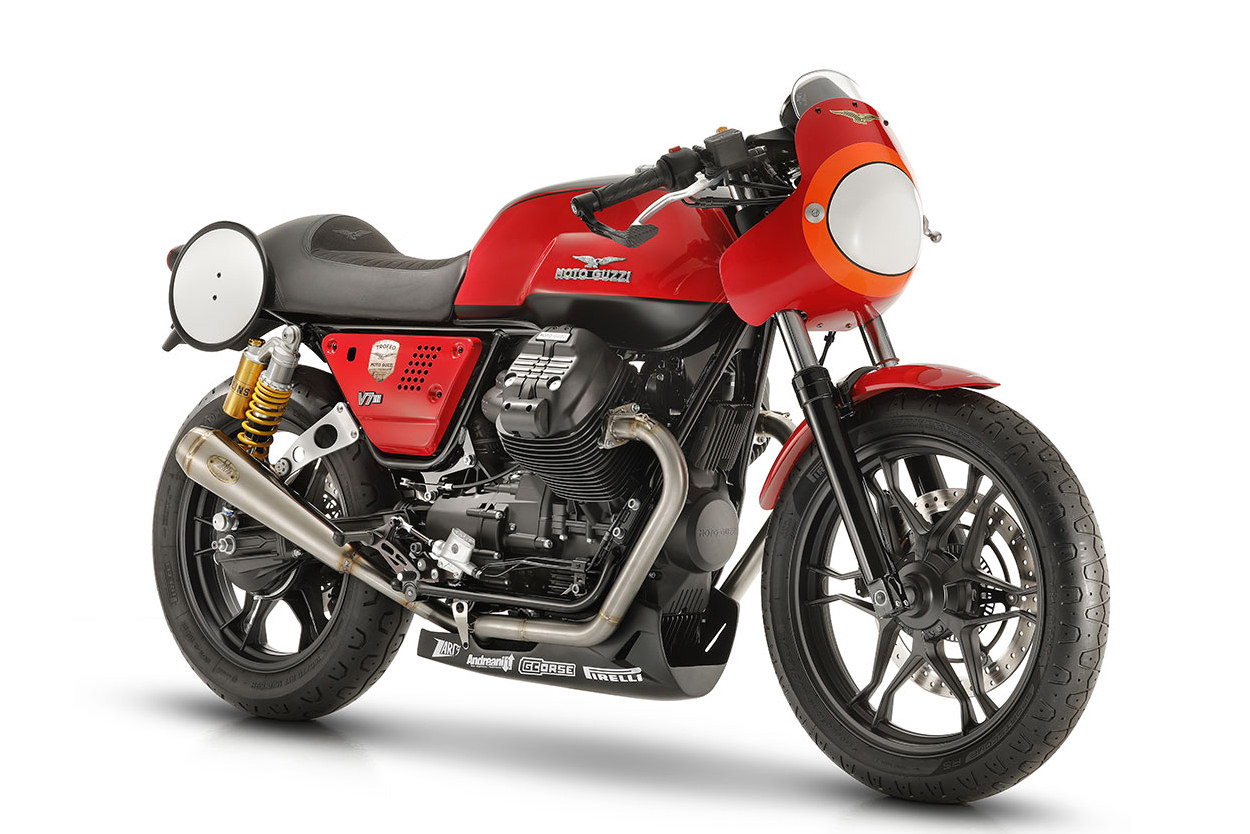 Moto Guzzi V7 III Fast Endurance The modern V7 has oodles of character and is delightful to ride, but I don’t think even the most ardent fan of Mandello’s roadster would peg it as a track bike. A few years ago, I did several laps of the Hampton Downs circuit in New Zealand on board a V7 Classic; it was an enjoyable half hour, but by the end of it, the bike and I had both had enough. 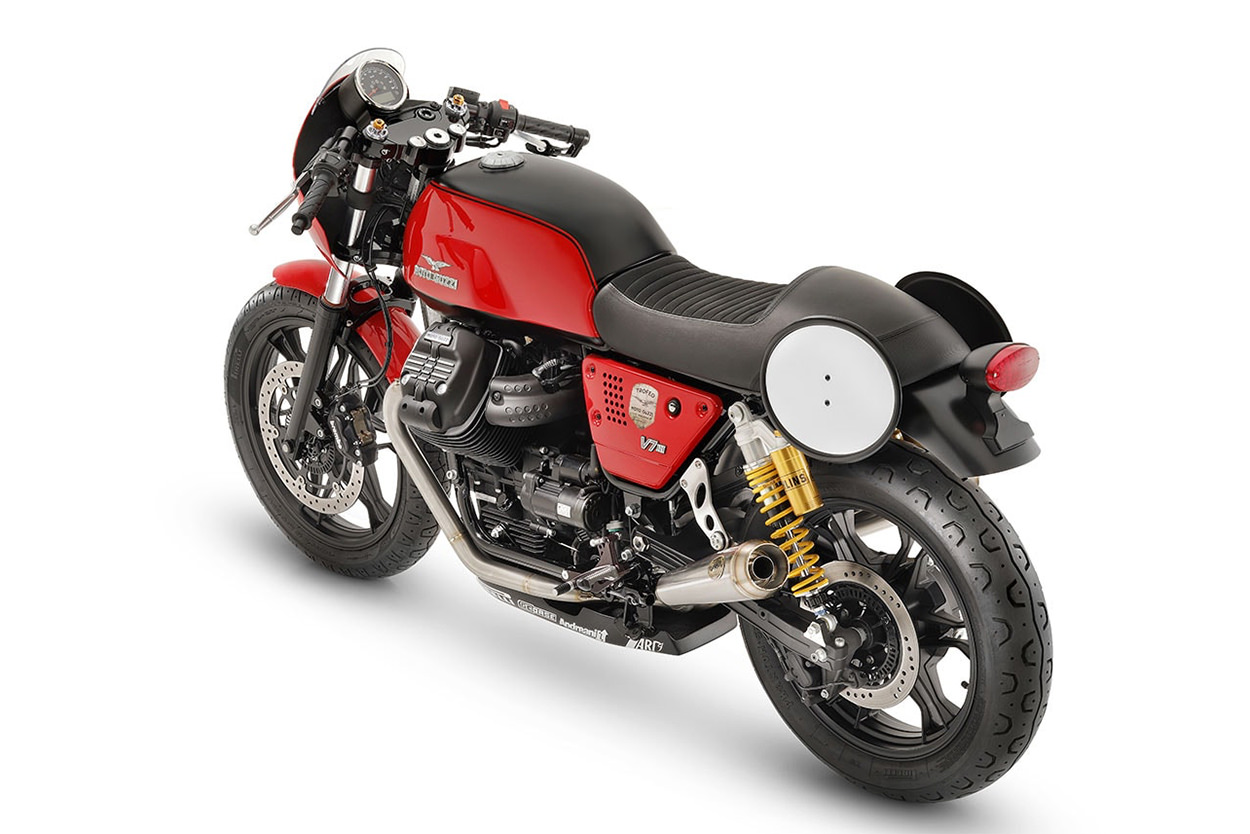 This machine is a different beast though. It’s modified for the Trofeo Moto Guzzi Fast Endurance race series, a FIM-sanctioned series of five 60-minute races in Europe. Each team has two riders, and there’s a Le Mans-style start.

The V7 is a notoriously hard bike to extract more power from, which is part of the reason I sold mine. But the racing V7 IIIs have the new 850cc engine, and are fitted with a kit from the Guzzi specialist Guareschi Moto. 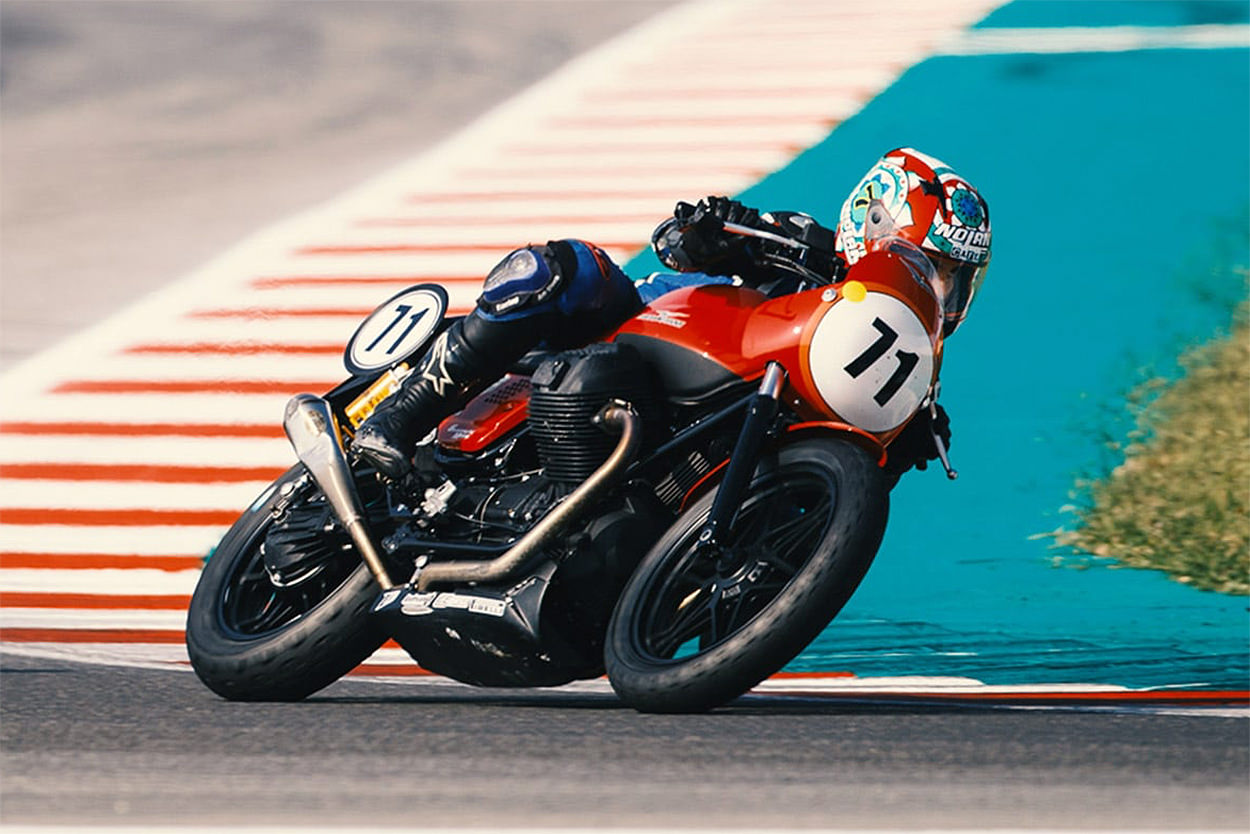 The mods include Öhlins piggyback shocks, Andreani fork cartridges, a free-flowing Zard exhaust system, clip-on bars, a bikini fairing, and a solo seat unit. There are also more race-specific bits, such as new rearsets and a remapped ECU from GCorse—which includes an Up Map T800 unit, a Bluetooth interface that connects to your smartphone via an app.

This kit is also available via the Moto Guzzi sales network for €3,300. If I owned the current model V7 III, I’d be very tempted. [Moto Guzzi Fast Endurance] 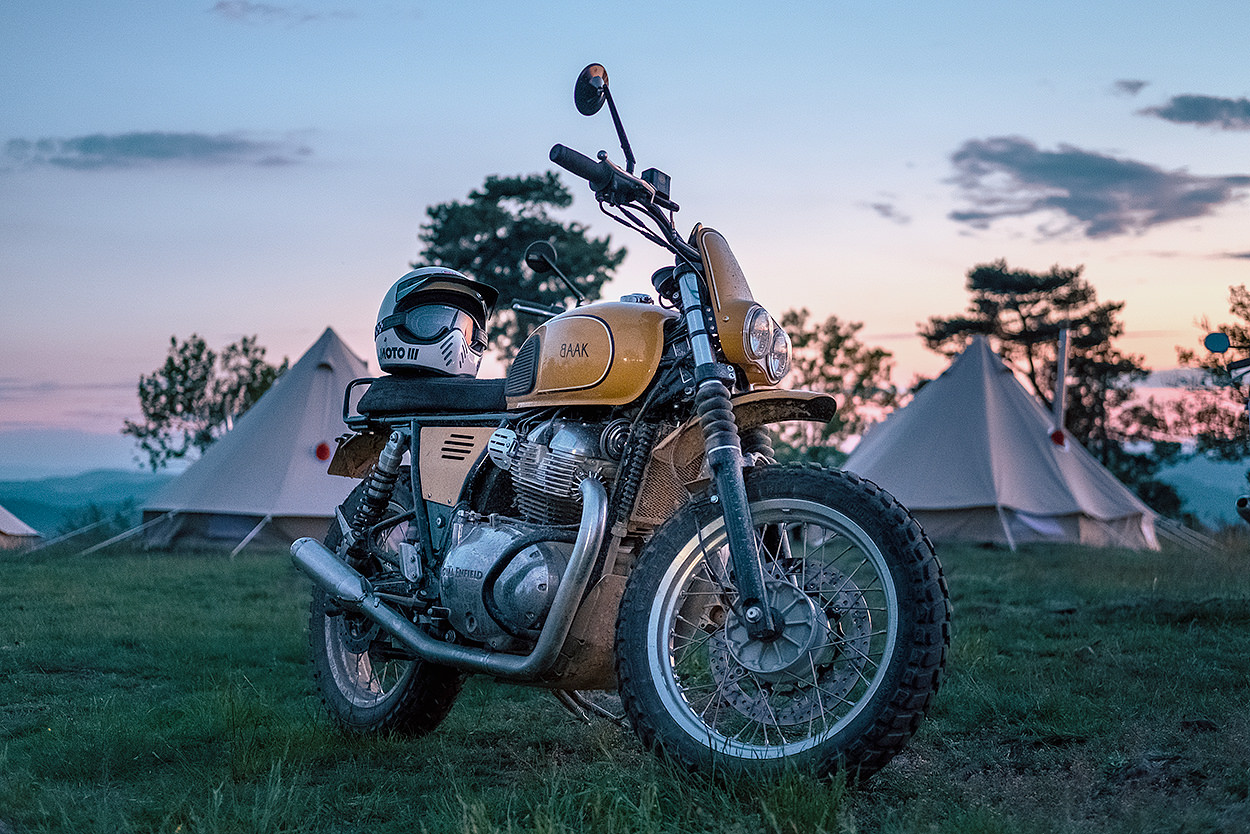 BAAK Royal Enfield Interceptor Trail Diversification is the name of the game for bike builders who want a secure cash flow, and the French company BAAK knows that well. The Lyon-headquartered workshop already offers a big range of parts and clothing as well as custom builds, and has just widened its offering even more—by hosting a series of riding ‘Adventures.’ 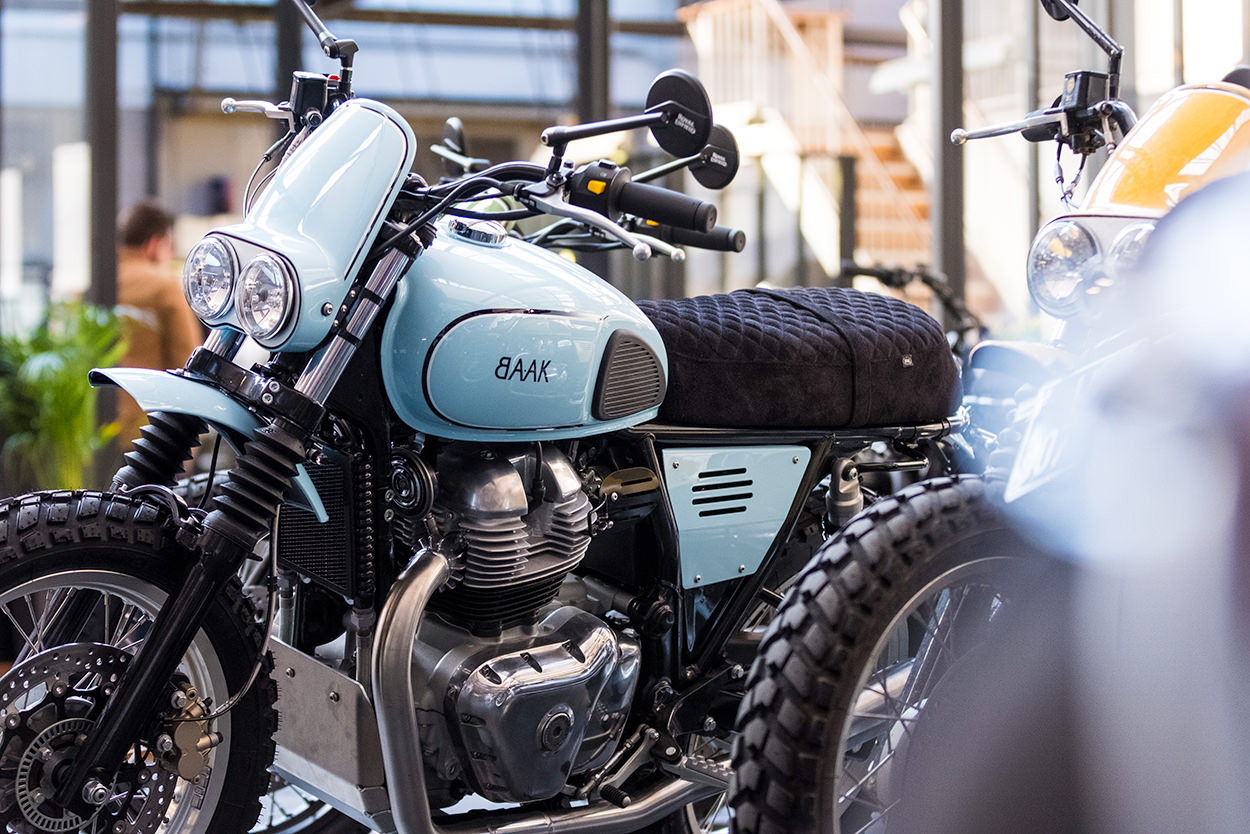 There are three adventure routes, in Haute Provence, Beaujolas and Alpes du Sud, and BAAK have built a fleet of bikes for riders who don’t want to take their own machines.

These bikes are based on the Royal Enfield Interceptor 650, and tweaked to make them more suitable for off-road hardpack trails. The biggest change is the new rims laced to the factory hubs, with a 19’’ in the front and 17’’ in the back (as opposed to the factory 18’’ all around). The wheels are now wrapped in Michelin Anakee Wild tires. 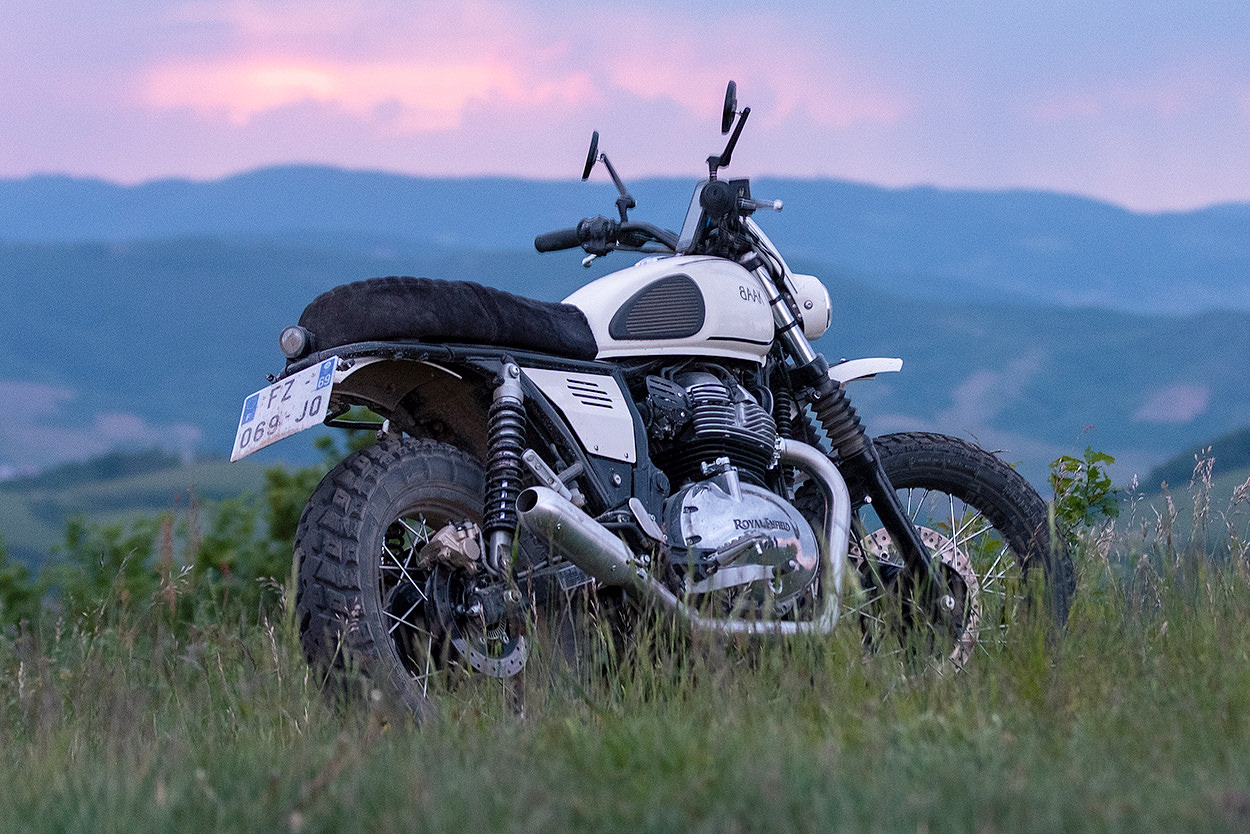 A pair of stainless steel fenders keep the mud and rocks at bay, with the front fender set higher than stock. An aluminum sump guard protects the engine and aluminum is also used for the side covers and the new handlebar clamps. BAAK’s own bars are hooked up to the clamps, in a tracker bend that sits higher than standard.

Longer shocks (tuned for the purpose by Shock Factory) cushion the ride over rough stuff, and a pair of BAAK’s own aluminum mufflers free up the engine breathing a tad. 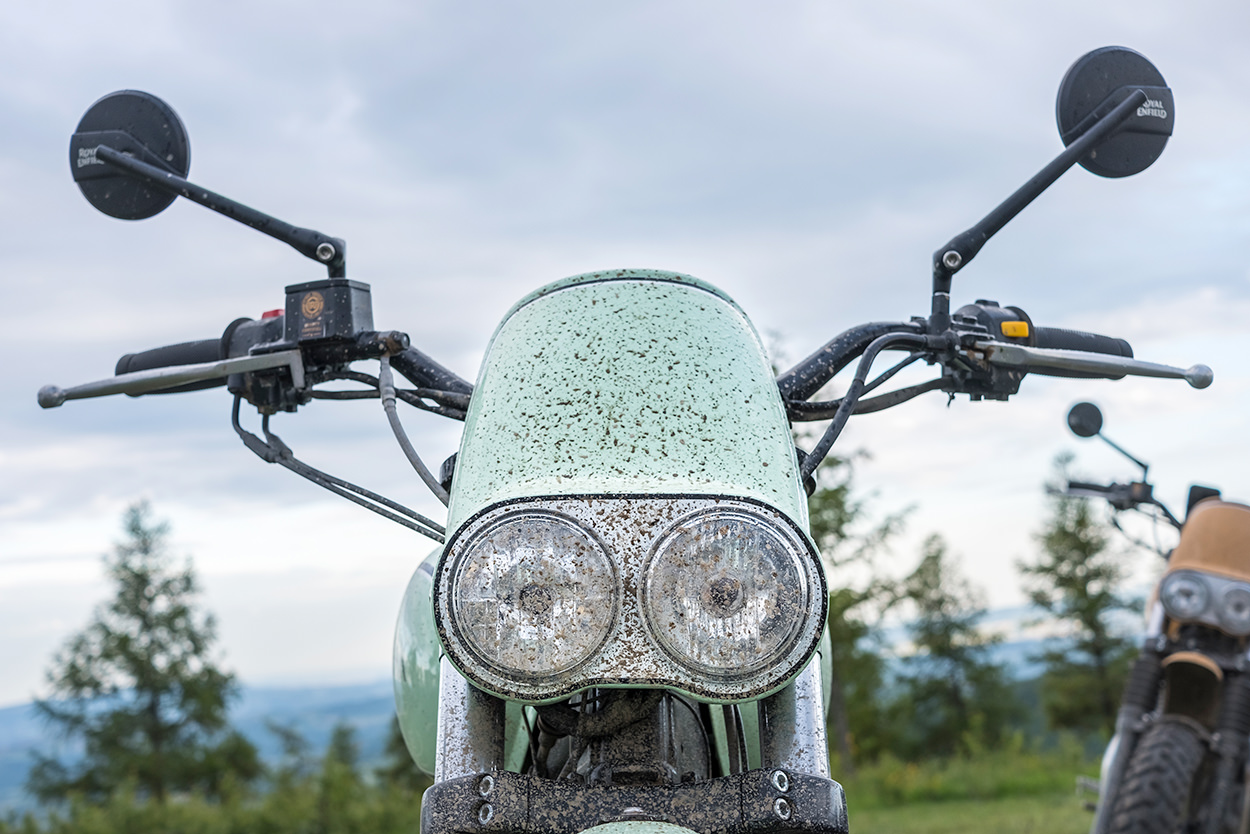 Other goodies include a fiberglass front fairing, new instrumentation via a Daytona mini gauge on a custom bracket, and a beautiful new seat in black suede, with thicker and more comfortable foam than stock.

Riding one of these around the scenic country roads and tracks of rural France sounds like the perfect holiday. But if you can’t make it to la République, BAAK’s new shop in L.A. can build one up for you too. [BAAK Royal Enfield Interceptor Trail] 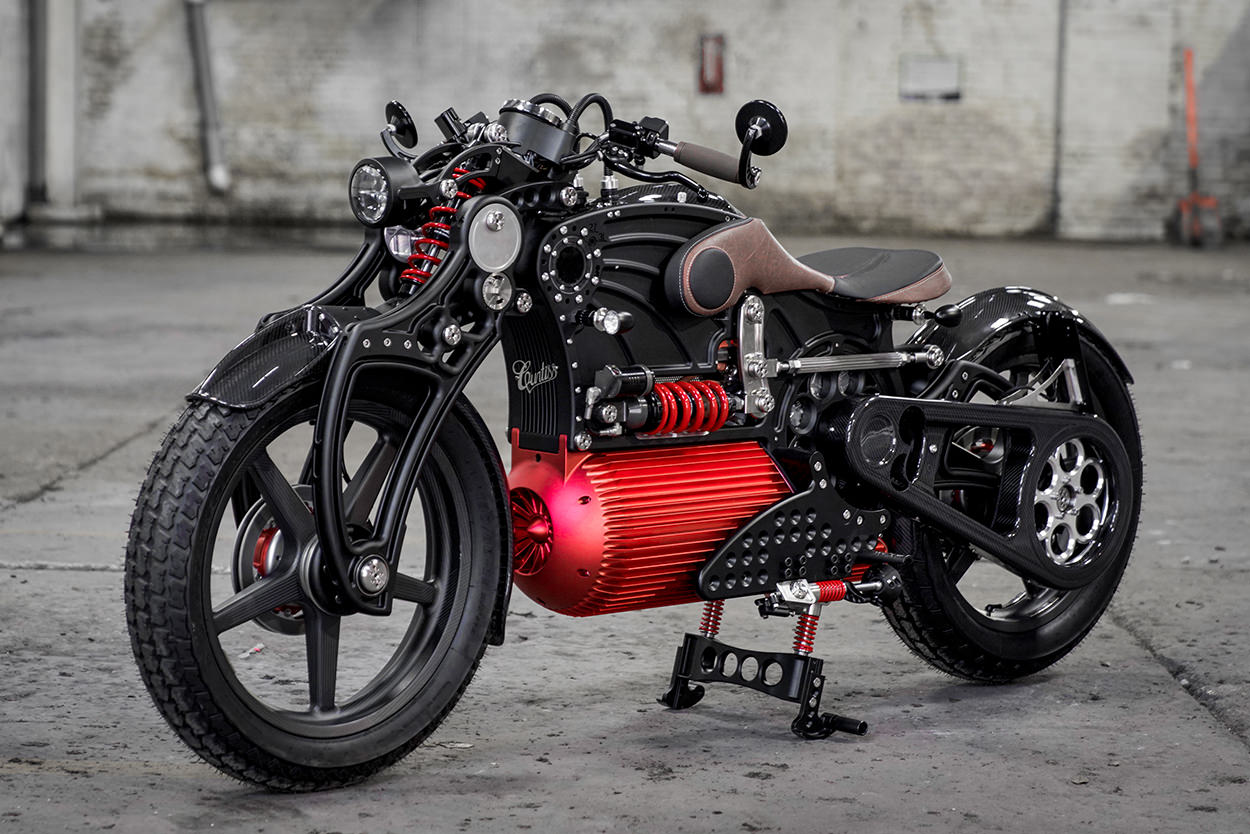 The Curtiss 1 is nearly here One of the most unusual motorcycles of recent years is finally going into production in January. Alabama-based Curtiss (the company formerly known as Confederate Motors) has released the specs of the $115,000 ‘Pilot Series Curtiss 1’ and they’re intriguing to say the least.

The bike is billed as having ‘The world’s most power-dense LEV powertrain platform,’ with an axial flux YASA P400 motor and a liquid-cooled proprietary battery pack. 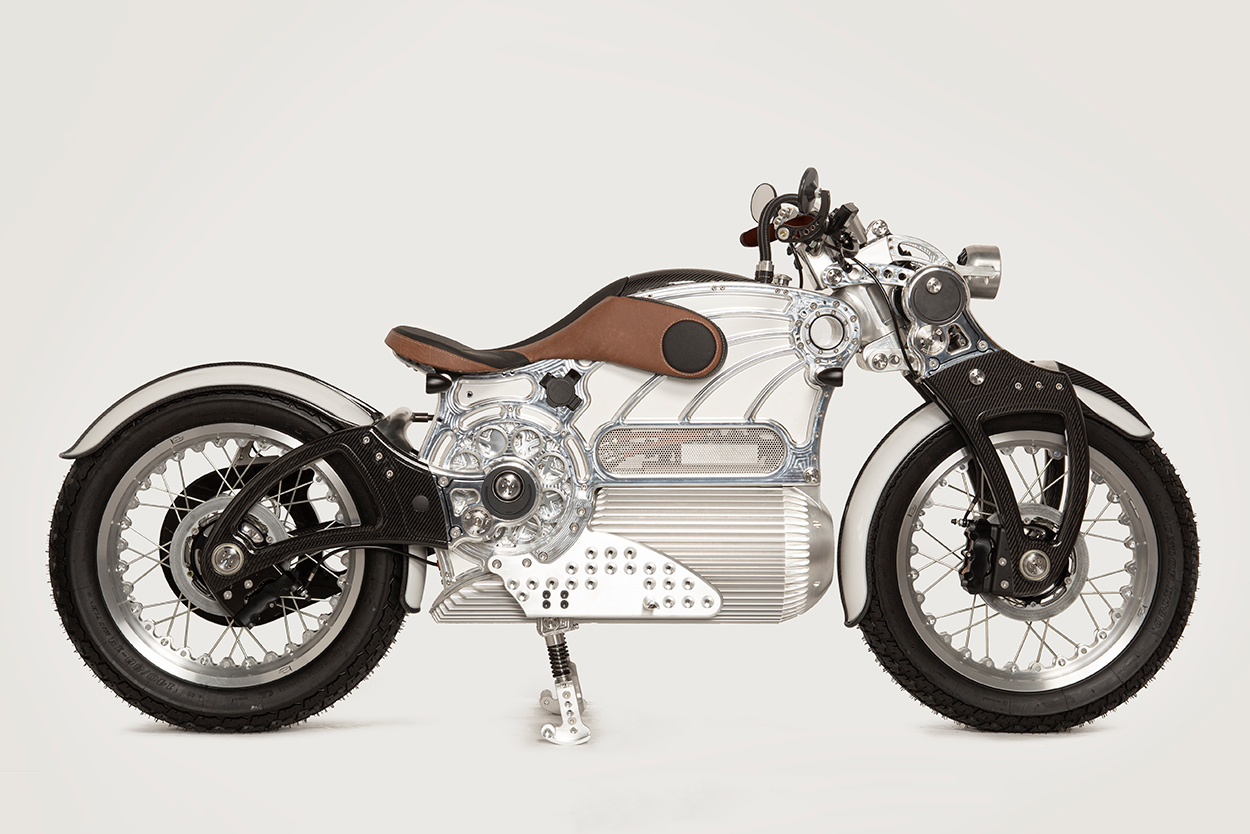 This pack can be boosted in the future, via cloud-based software upgrades. The initial run of bikes will have 110 hp (82 kW), but Curtiss anticipates being able to raise this to 217 hp (159 kW).

The bike is claimed to weigh just 425 lbs, so even at the lower power level, the instantaneous torque offered by an electric motor should provide terrific performance. As a comparison, the Zero SR/F has the same 110 horses on tap, but weighs roughly 75 lbs more. 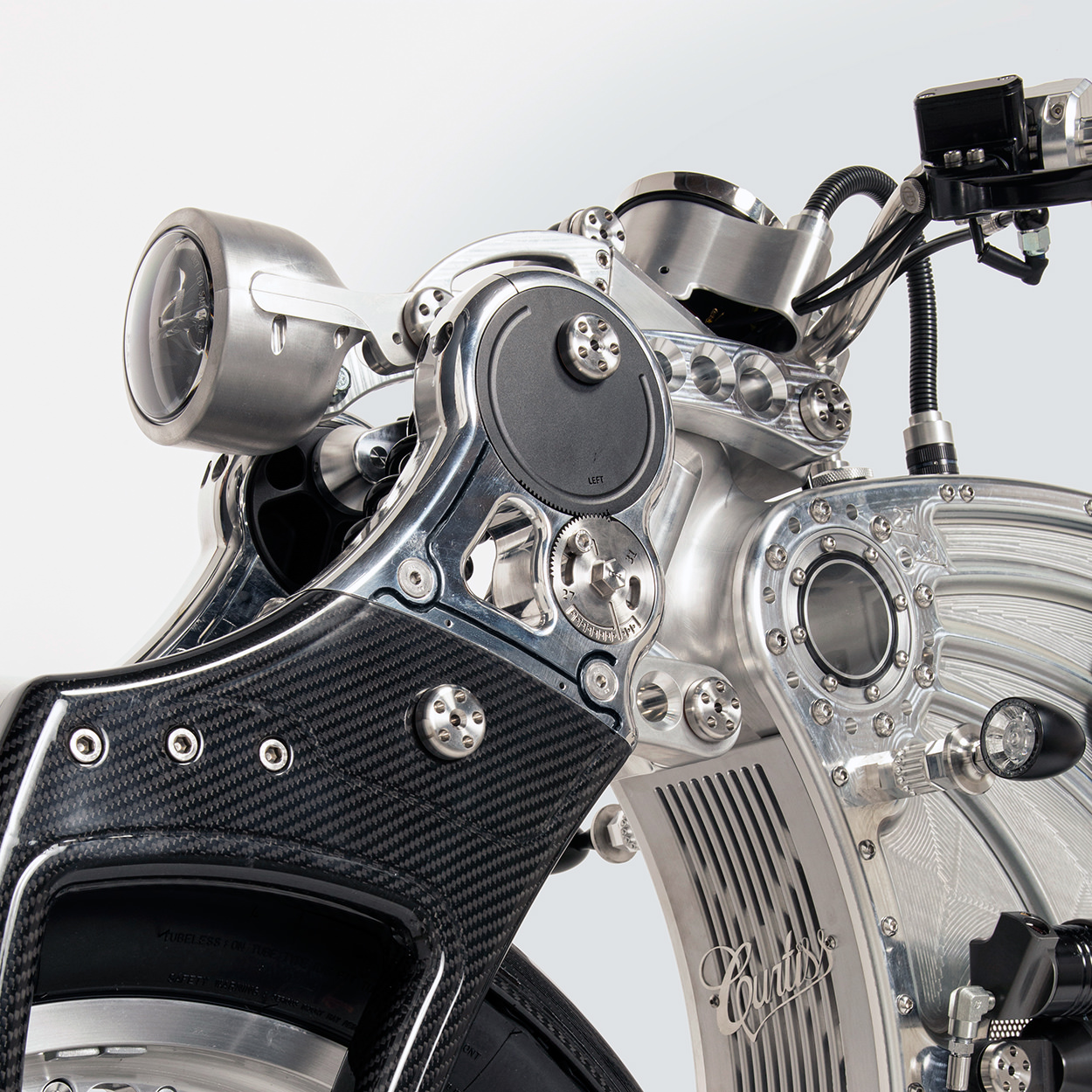 Range is listed as 120 miles in the city, 70 miles on the highway, and the bike can charge to 80% capacity in two hours with a 220V charger. 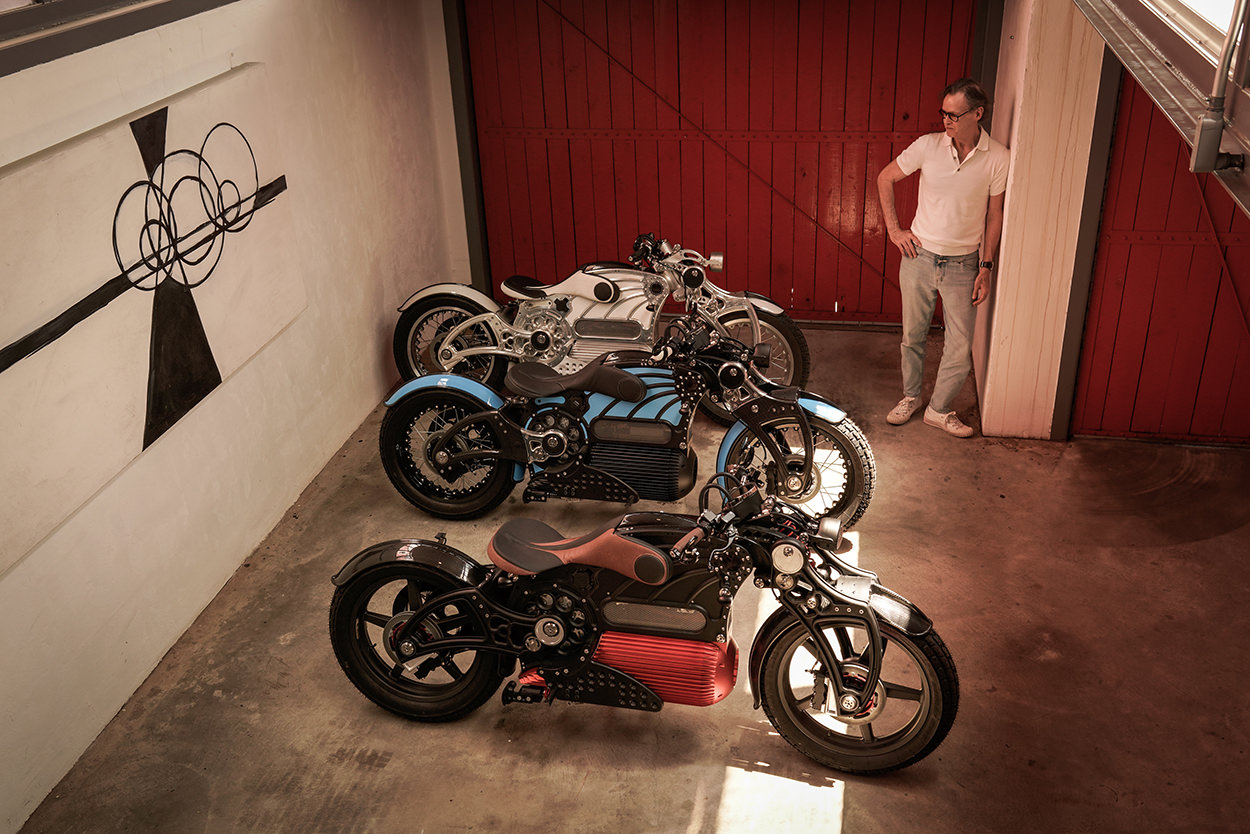 If this butters your toast, you can reserve a bike with a $30,000 deposit. Your purchase also gives you the option to buy 115,000 Curtiss shares at a dollar a pop—regardless of the trading price—and an NFT coin. This digital token can be traded, and gives the owner a 13% discount on all Curtiss products, including bikes, forever.

The deal also includes a free battery and software upgrade after four years—another unusual but rather appealing initiative. If there ever was a motorcycle for the digital age, this is it. [Curtiss Motorcycles] 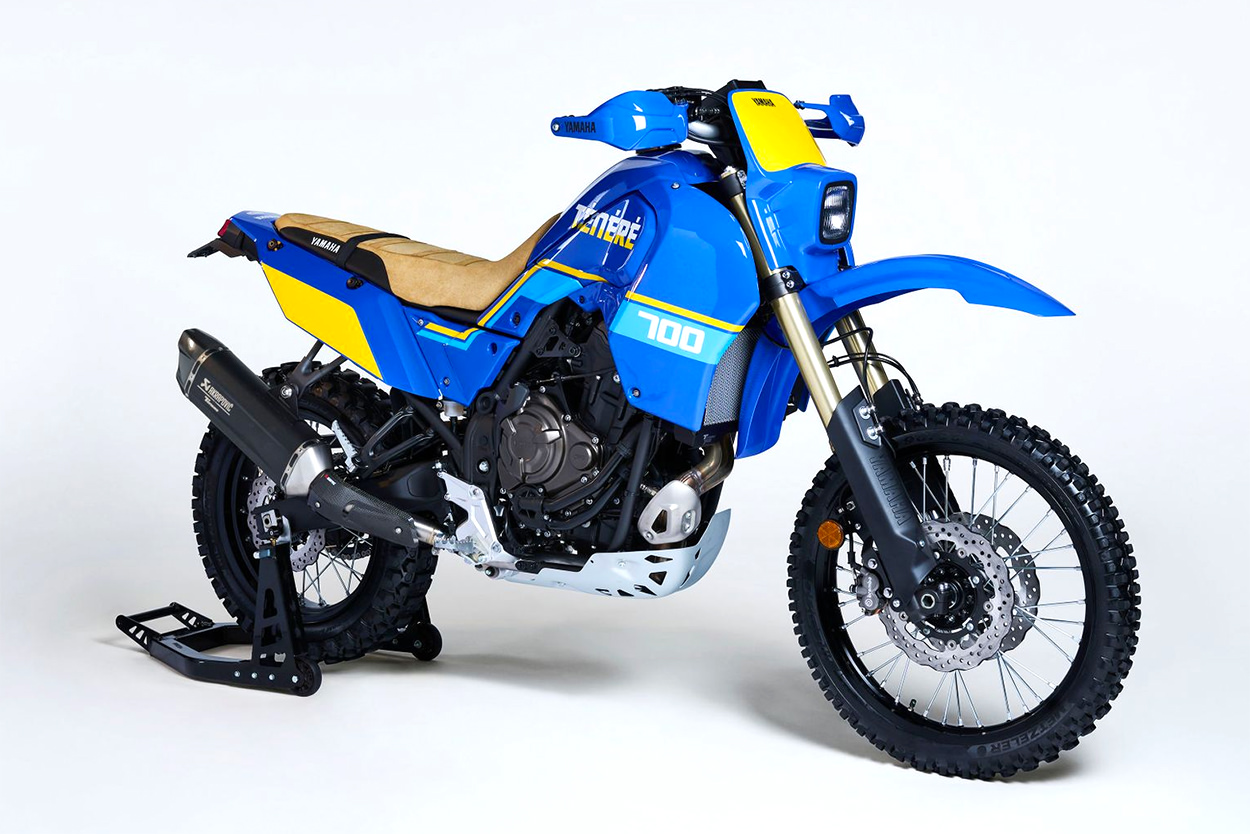 Yamaha Ténéré 700 Héritage Kit by Crispy Club We’ve never heard of Crispy Club either, but love the name. And we love the look of this kitted-out T7 even more.

Crispy Club are based in Paris and specialize in restoring and selling classic enduro bikes, alongside a very tongue-in-cheek range of apparel. Their latest venture is something a little more sensible though: a kit that transforms the looks of the Ténéré 700. 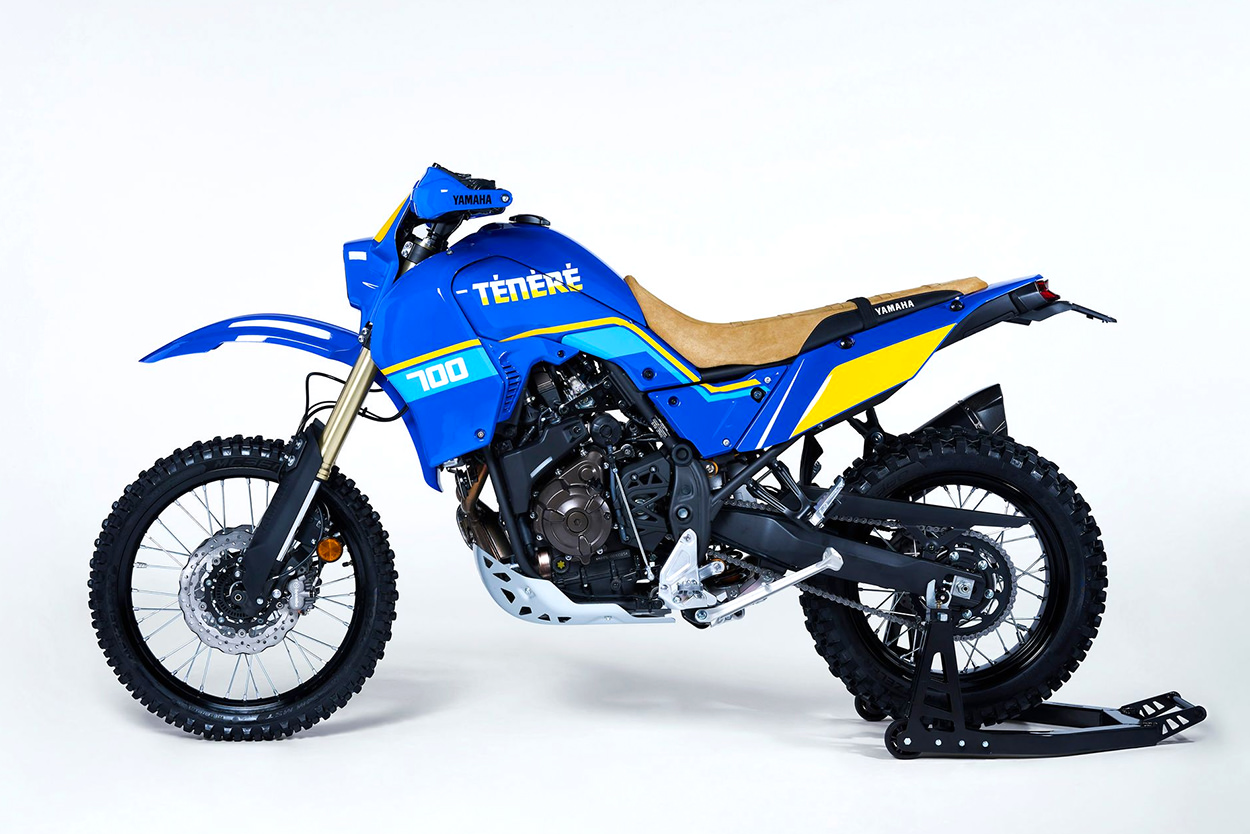 The current Ténéré is refreshingly light and simple: a midsize machine pitched at ADV riders who rate value-for-money over acronyms and electronic aids. The factory plastics don’t look too bad either, but Crispy Club have clearly spotted a gap in the market.

This kit channels the classic Yamaha Dakar look, and doesn’t require any mods to the bike—apart from removing the factory plastics. 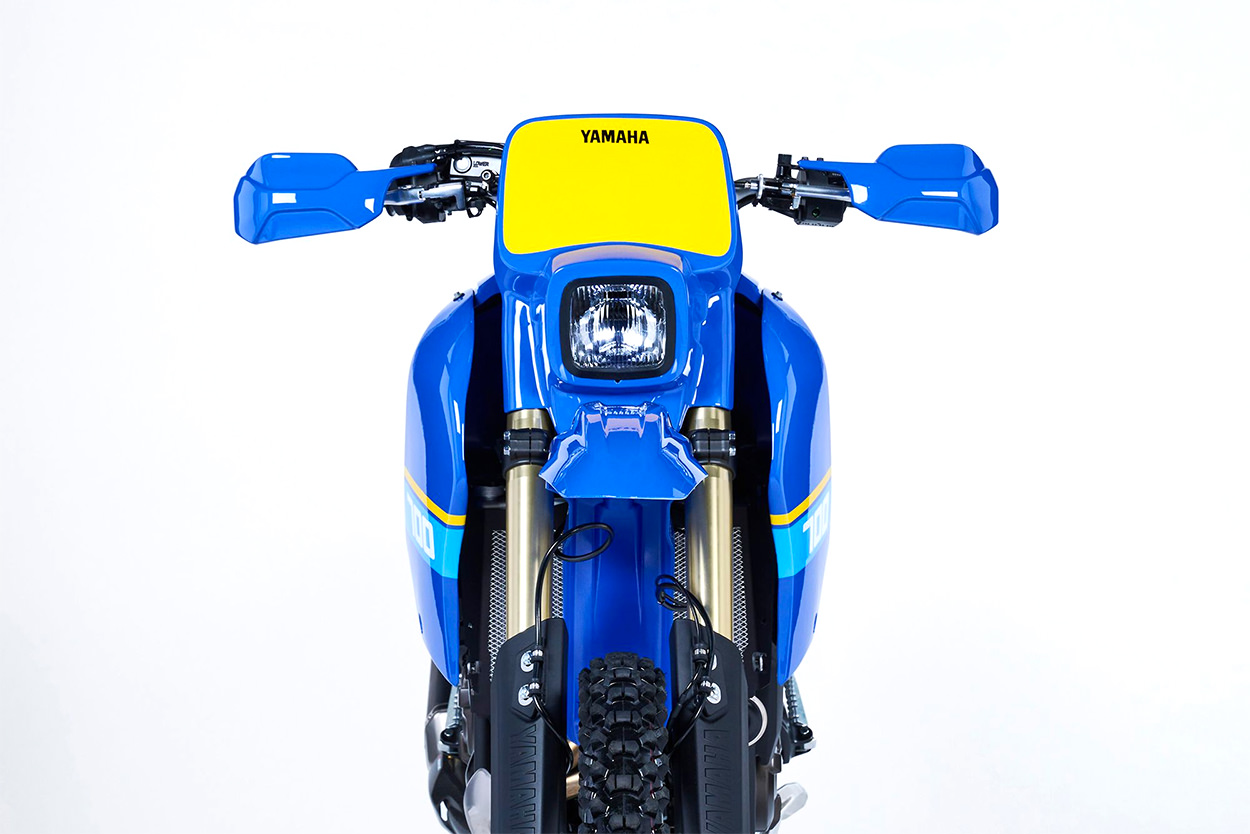 It includes a pair of side panels for the tank, an 80s style front mini-fairing with integrated square headlight, and an offset bracket for the instruments. To complete the look, there’s also an oversized high fender kit.

The cost for the raw parts that you can paint yourself is €2,400, but Crispy Club can also do the paint for you, at a total cost of €2,900. If you need any more incentive to buy the brilliant Ténéré 700, this has to be it. [Crispy Club] 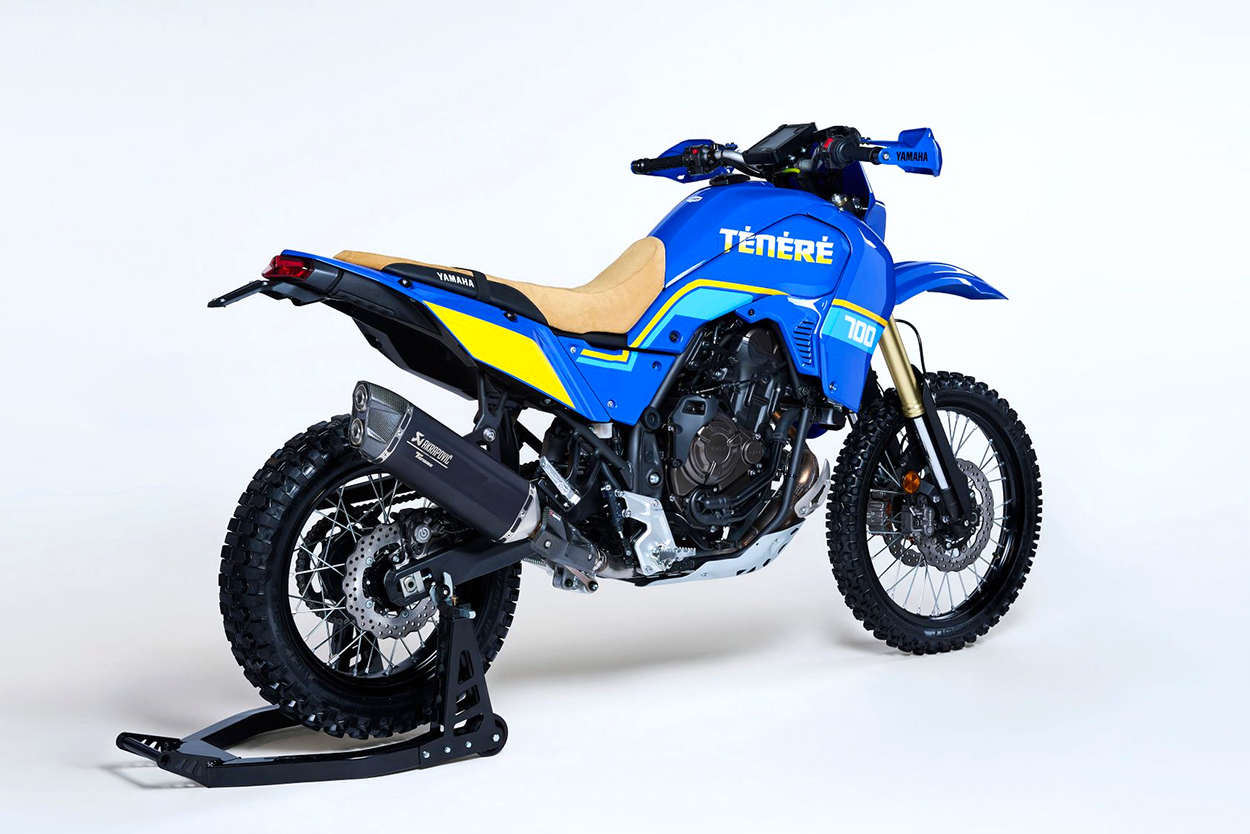