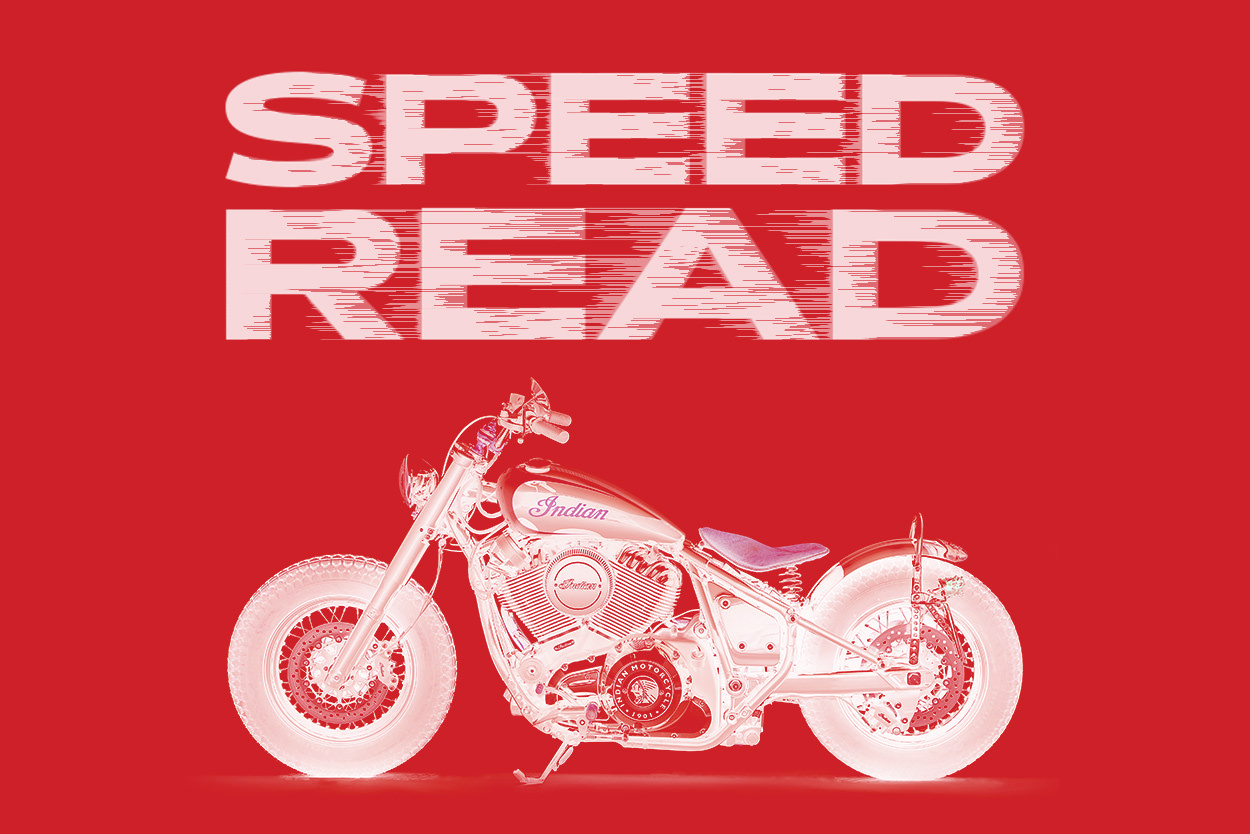 What would the legendary Bratstyle builder, Go Takamine, do with an Indian Chief? We’ve got the answer, along with a Zero SR/F with hand-shaped bodywork, a BMW R18 from South Africa, and the incredible story of Tye Smith and his ‘Dreamboat’ Harley Panhead. 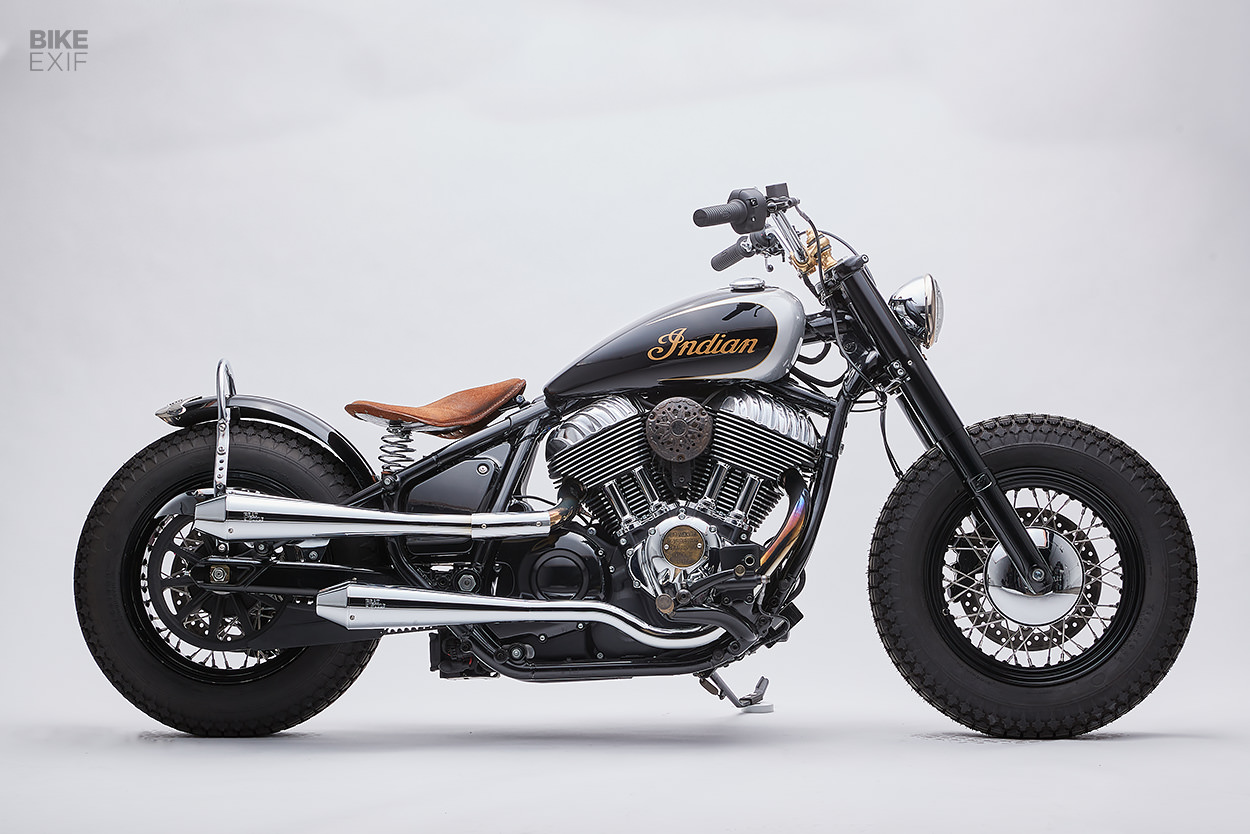 Indian Chief by Go Takamine If you want to customize a V-twin, we can’t think of anyone better qualified than Go Takamine. The Okinawa-born, US-based flat track racer singlehandedly kicked off the ‘Bratstyle’ look that’s been copied the world over.

So it’s no surprise that his take on Indian’s new Chief is a masterclass in style and proportion, that pushes its looks back to the golden years of Indian motorcycles. 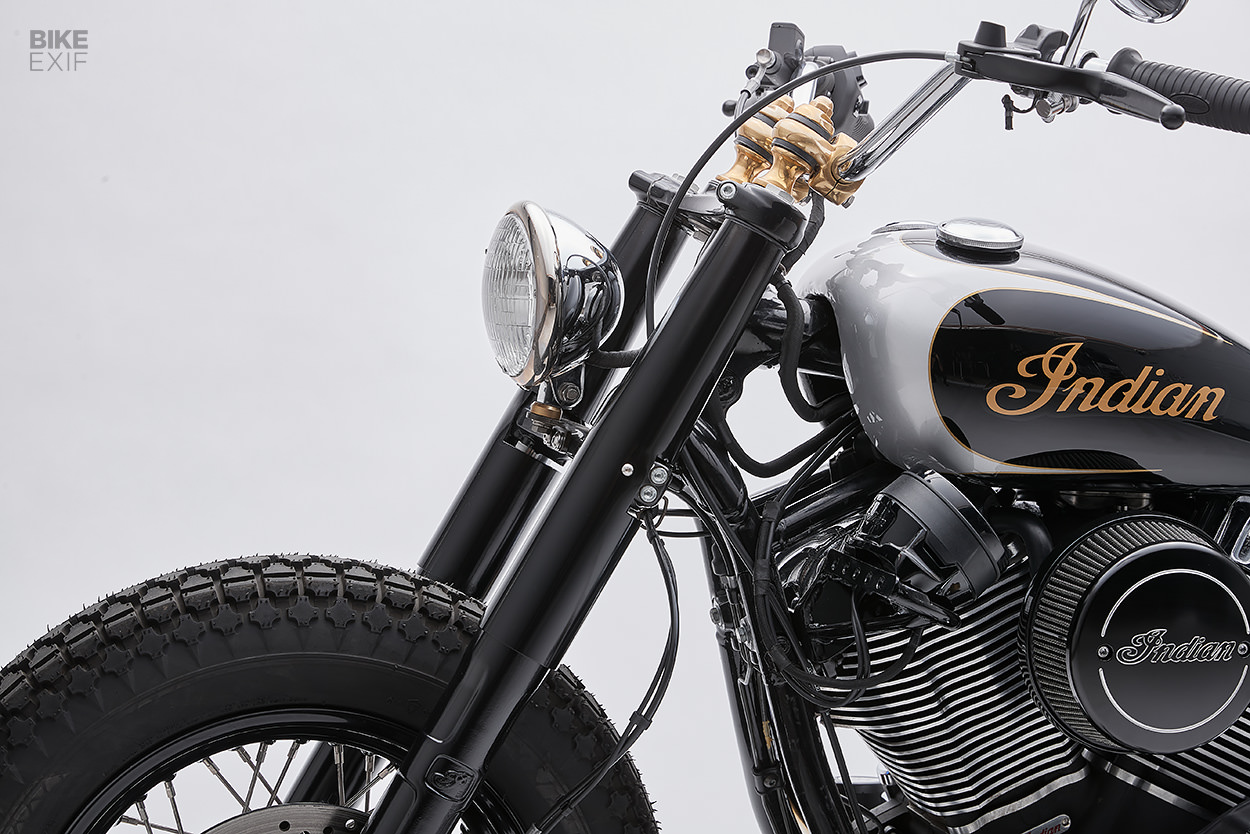 The rear suspension has been made rigid, via a set of struts that replace the original shocks. The fuel tank’s been narrowed and lowered, with the Indian’s touchscreen gauge now tucked away on the left hand side. The front’s been trimmed with a new headlight, brass risers and new bars. 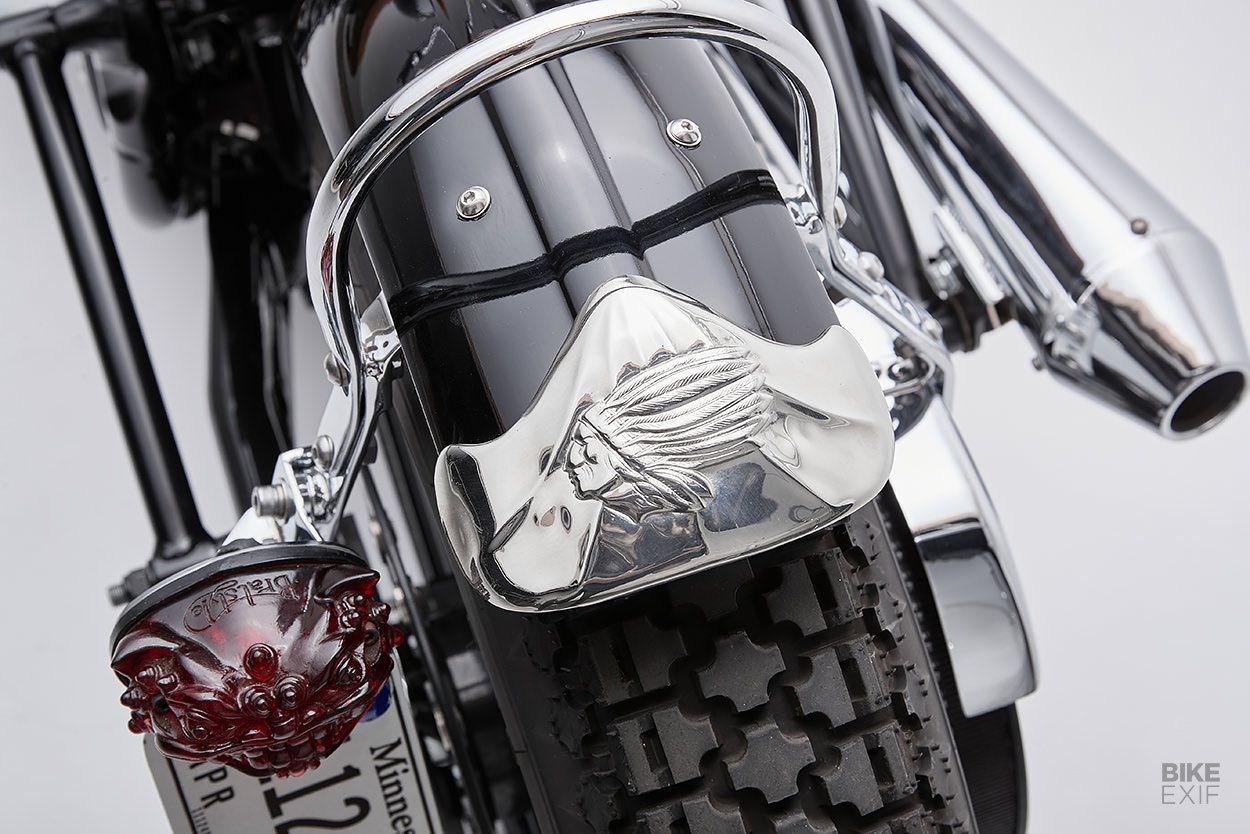 At the back is a new leather seat on springs, along with a repurposed 1937 Ford fender, adorned with a 1940s Indian fender tip. There’s also a tiny custom sissy bar, and a classic Bratstyle taillight.

Brass accents, a simple twin exhaust system and an understated livery help emphasize the heritage angle of the standard bike, while staying firmly away from the brown-tassel-jacket vibe that cruisers can give off.

Go’s Indian Chief reminds us that he is still the king of classy, distinctive V-twin builds. And we’re not alone, with the Chief being snatched up by British actor Nicholas Hoult. The man’s got taste. [Indian Motorcycles] 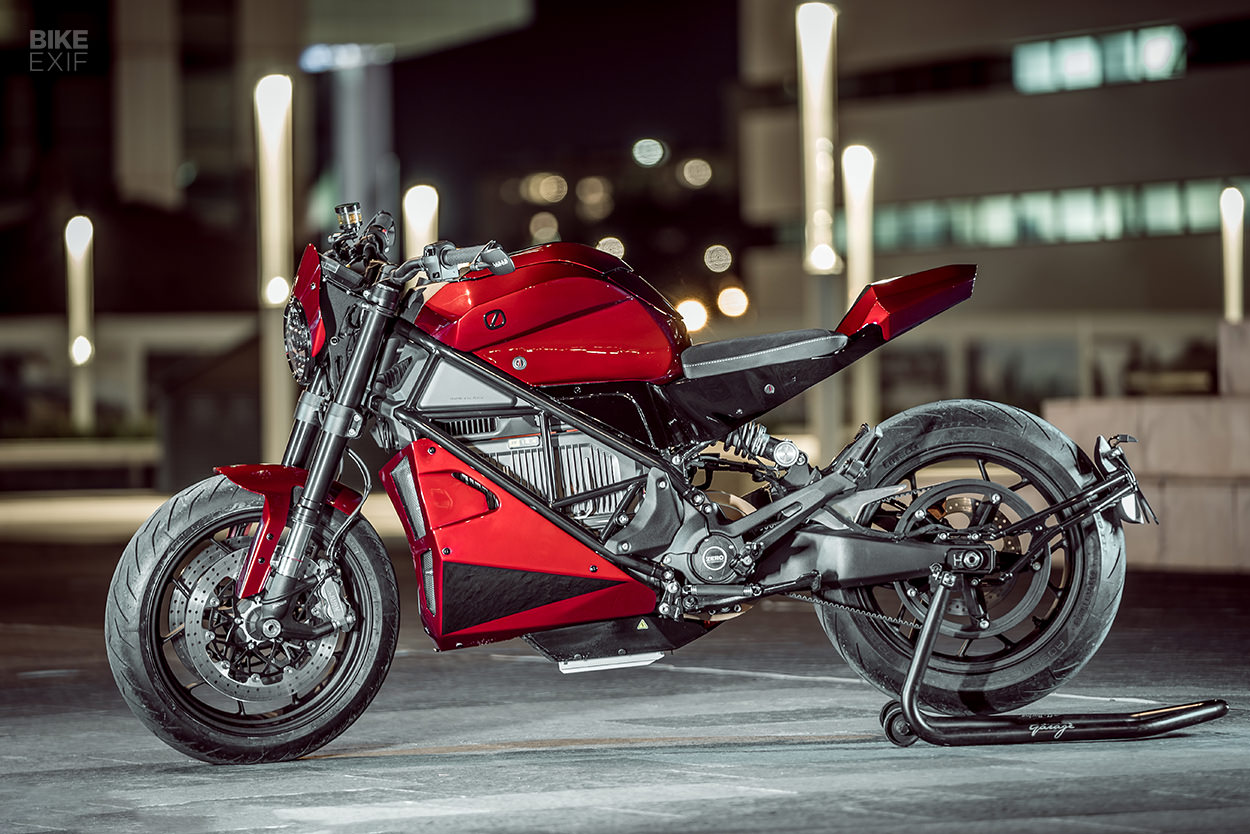 Zero SR/F by CC Racing Garage While Rome’s CC Racing Garage has long had a penchant for V-twins, the team has now turned their considerable metal-working skills to the electric engine, with a bolt-on, hand-formed kit for Zero’s flagship streetfighter. That’s right—all the work you see here is the result of hours of hard work on an English wheel. 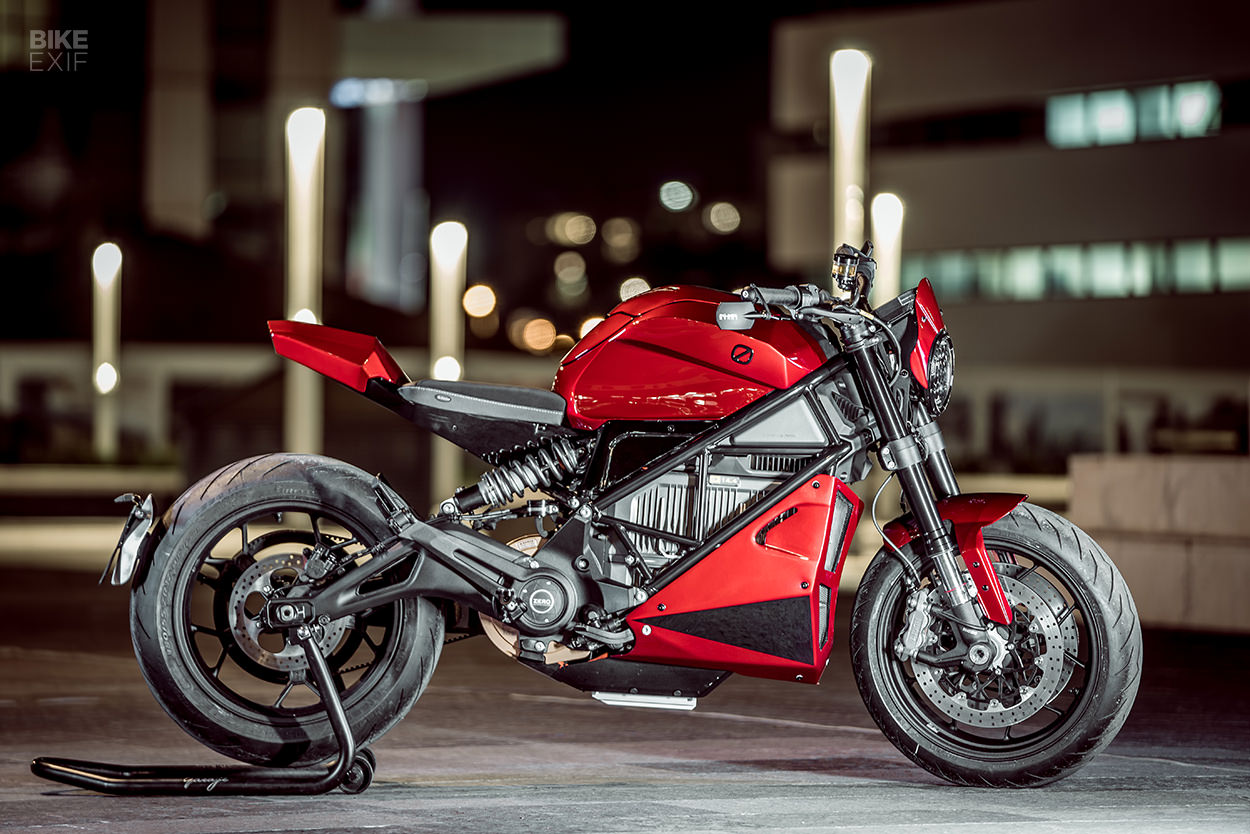 “The main theme of the project was to create something that makes it a one-of-a-kind vehicle,” CC Racing Garage’s Marco Gaziani says. “Something that at first glance doesn’t look like an electric motorcycle, but almost confuses it with a traditional one.”

Marco and his team also viewed the project as a way to pick apart an electric bike and understand the potential a non-ICE power plant opens up, all while making every part plug-and-play. And the reason why they opted for the Zero SR/F was simple. 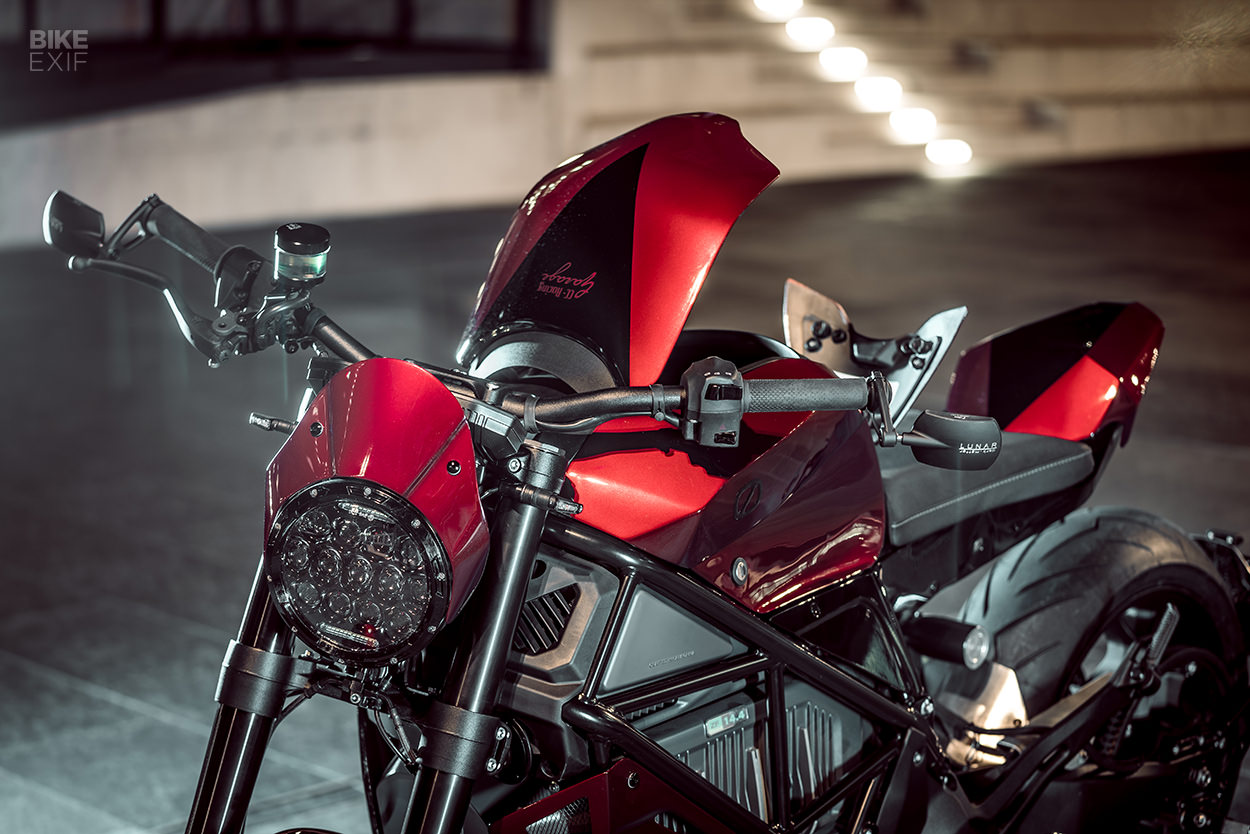 “I consider them the leaders in the construction of the electric bike world, like with Tesla and cars,” Marco says. “And the Zero SR/F is a very fast vehicle, with a lower weight compared to other electric motorcycles of equal performance.”

The work focused on making the design as elegant and sporty as possible, while still utilizing the existing storage space that an electric bike offers. All the modifications are completely reversible in the space of three hours. 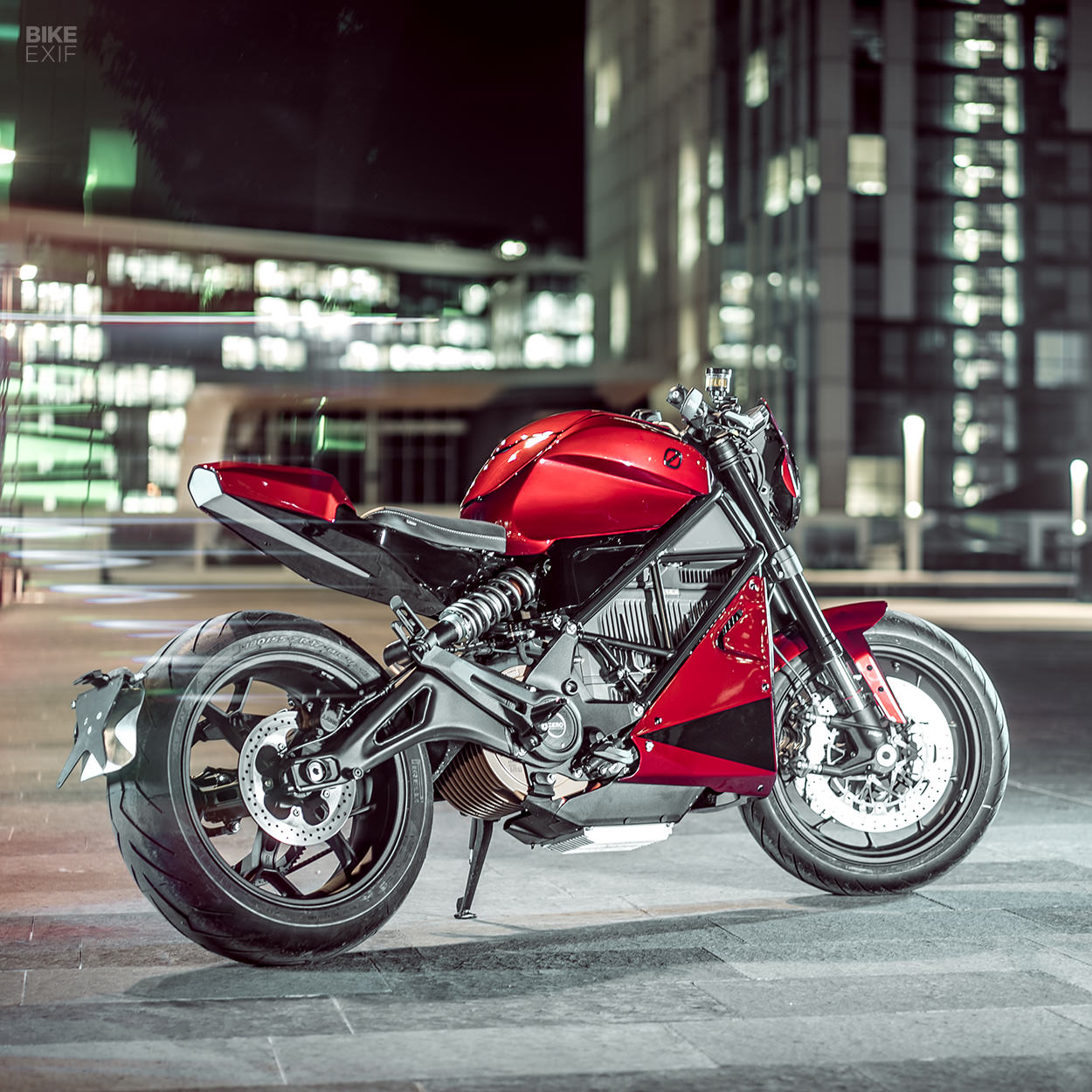 The result of the incredible metalwork is a bike that’s so neatly done it looks stock—and that’s no mean feat. Marco’s also putting feelers out to see if he should mass produce this as a kit. Tempted? [CC Racing Garage] 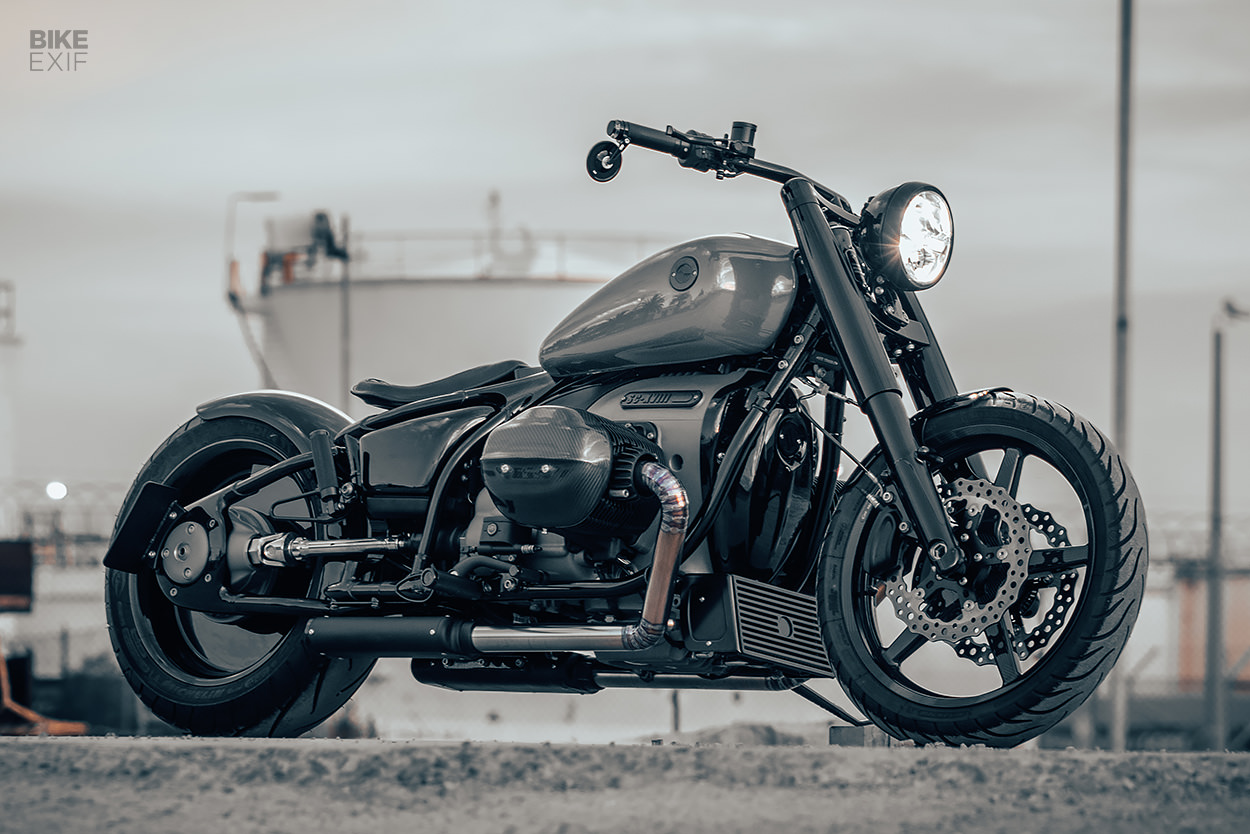 BMW R18 by Stoos Customs Based in Cape Town, South Africa, Stoos Customs normally specializes in stripped-back, rugged Harley builds. But this time around they’ve given the BMW R18 one hell of a makeover.

The project started as a simple visit to swap over some grips, but the owner became so excited by the potential of the made-in-Berlin Bomber that it ended up as a complete custom build. And the Stoos team was just as excited to tackle the brand new donor bike. 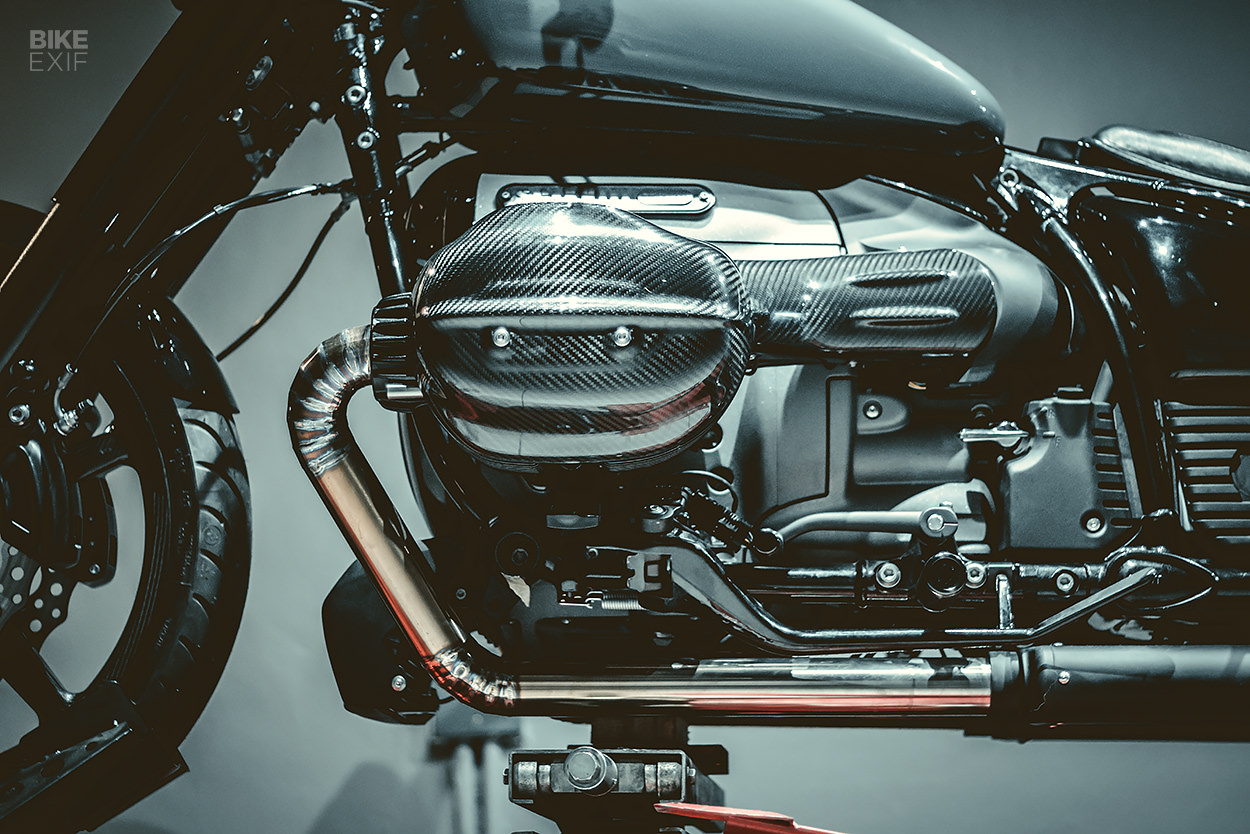 The work involved a new BST carbon wheel at the front, carbon fiber wheel covers at the back and Arlen Ness jagged brake rotors, all giving the bike a much modern, aggressive feel. Matching the wheels are a gorgeous set of one-off Stoos Customs carbon fiber head covers.

Even more bespoke parts come in the way of a unique two-into-two low profile exhaust and muffler system, with the flat black end cans an enormous change from the standard bulky fishtail units. 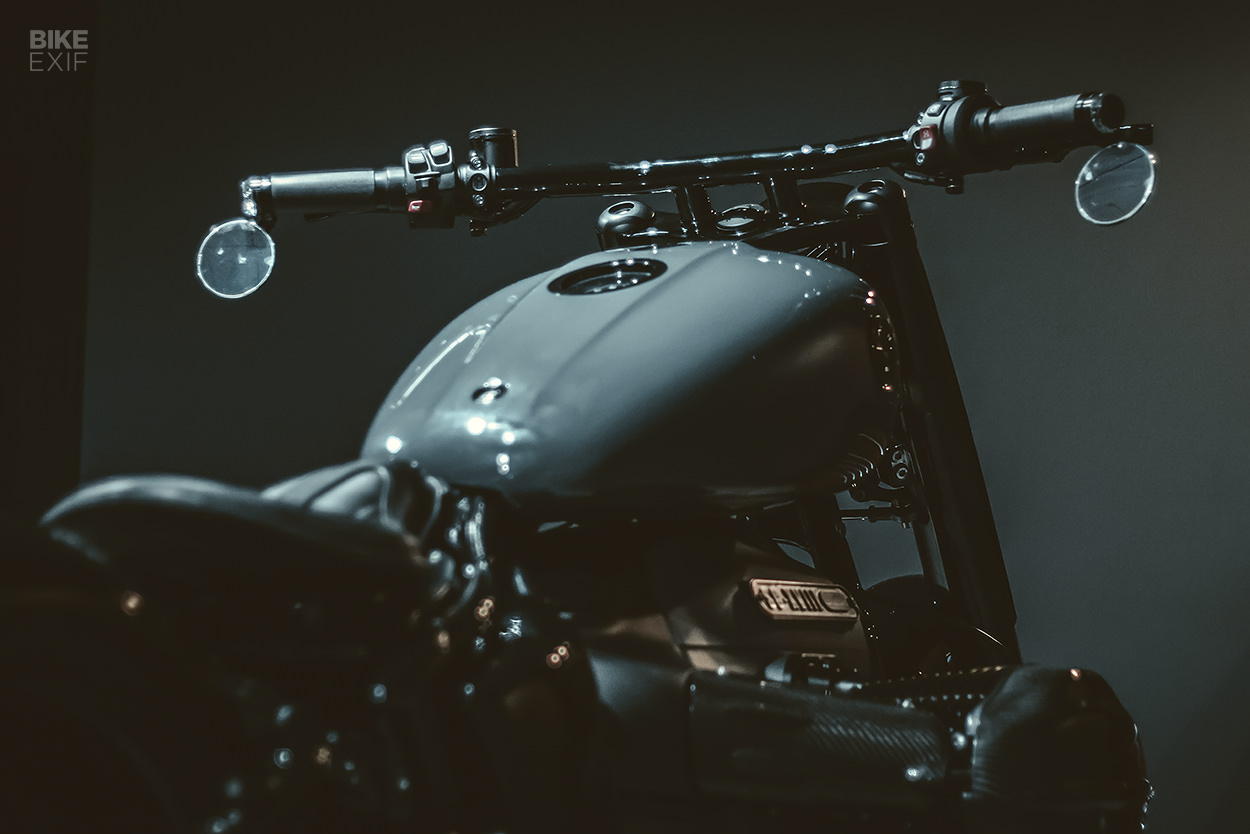 One of the biggest visual differences comes from a rework of the controls and gauges. All the cables and wires are now run through Stoos Customs bars with integrated risers, while the gauge now sits in the tank, completely transforming the appearance of the bike.

The new leather seat was hand stitched by local craftsmen Dead Crow, and there’s a sneaky mounting system for a pillion pad. 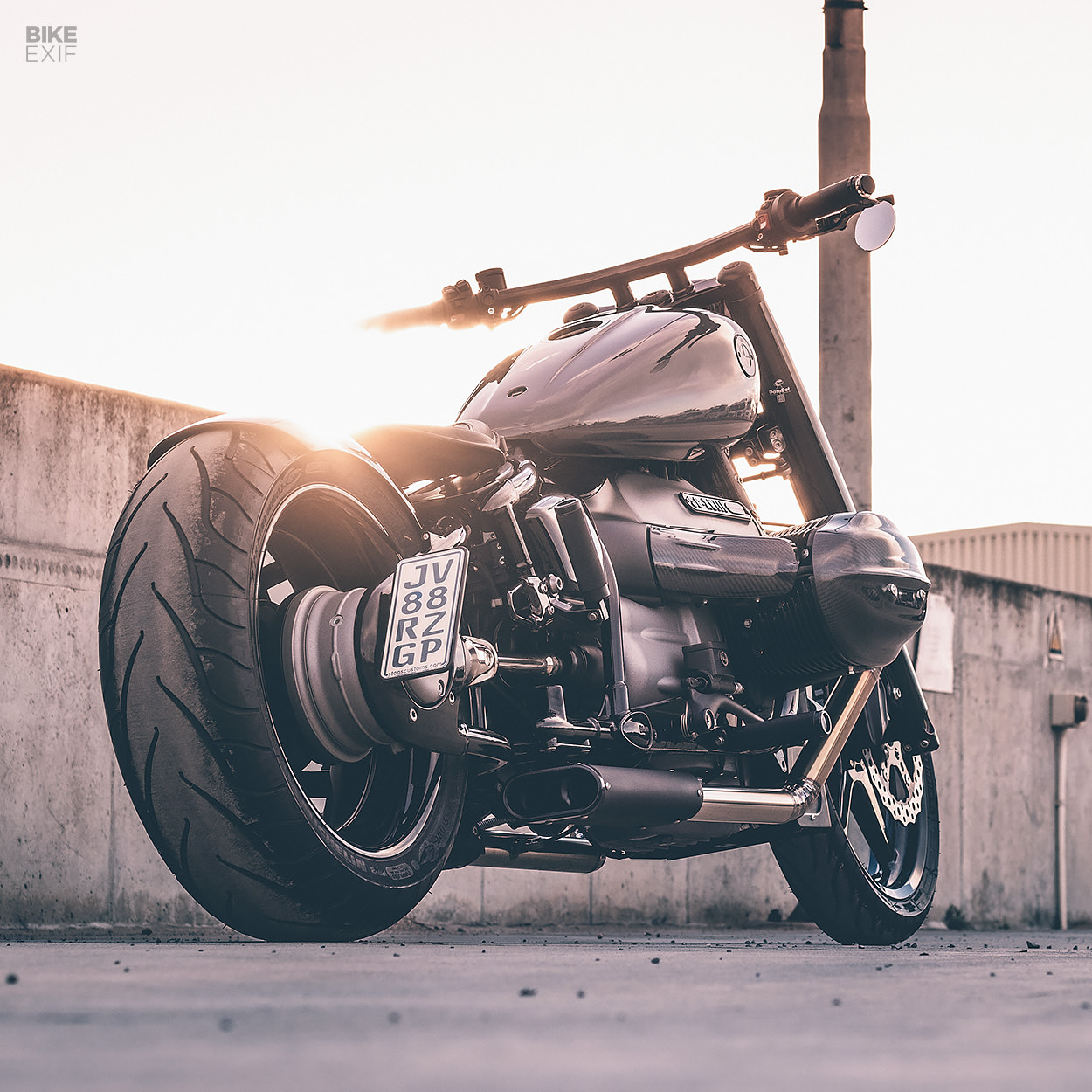 Motogadget mirrors and turn signals, and a host of in-house Stoos Customs parts, also adorn the R18, helping make the enormous boxer twin look more slim, lithe and aggressive than it has any right to be. 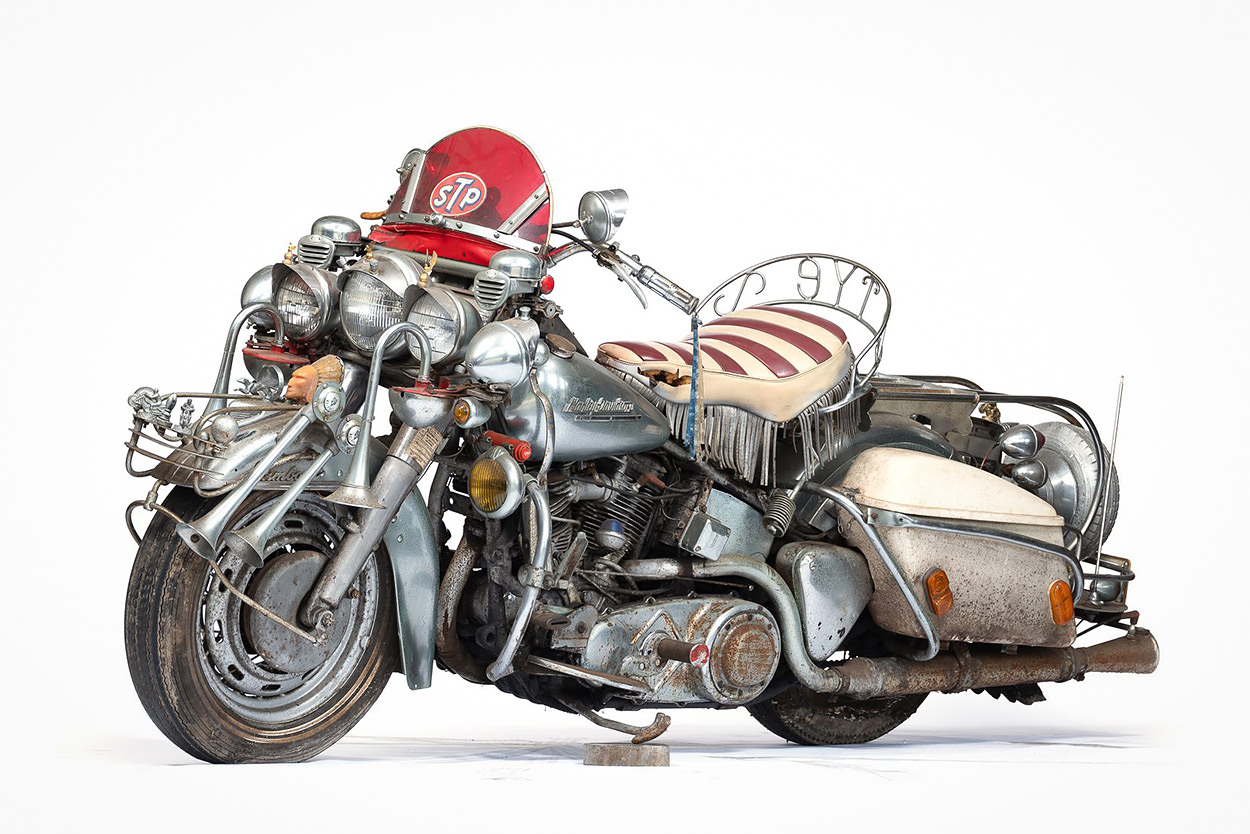 Prism Supply Co. presents the ‘Dreamboat’ While Prism Supply Company’s forte is sturdy, old-school bike parts, the team takes pride in highlighting stories from the history of motorcycling. And none are more eye-opening than the tale behind this vintage 1952 Harley-Davidson Panhead.

The ‘Dreamboat’ tells the story of Tye Smith and The Mohawk Delegation, an all-black motorcycle club that bucked cultural norms of the 1950s. An era when a person of color couldn’t even walk into a dealership to buy a new bike. 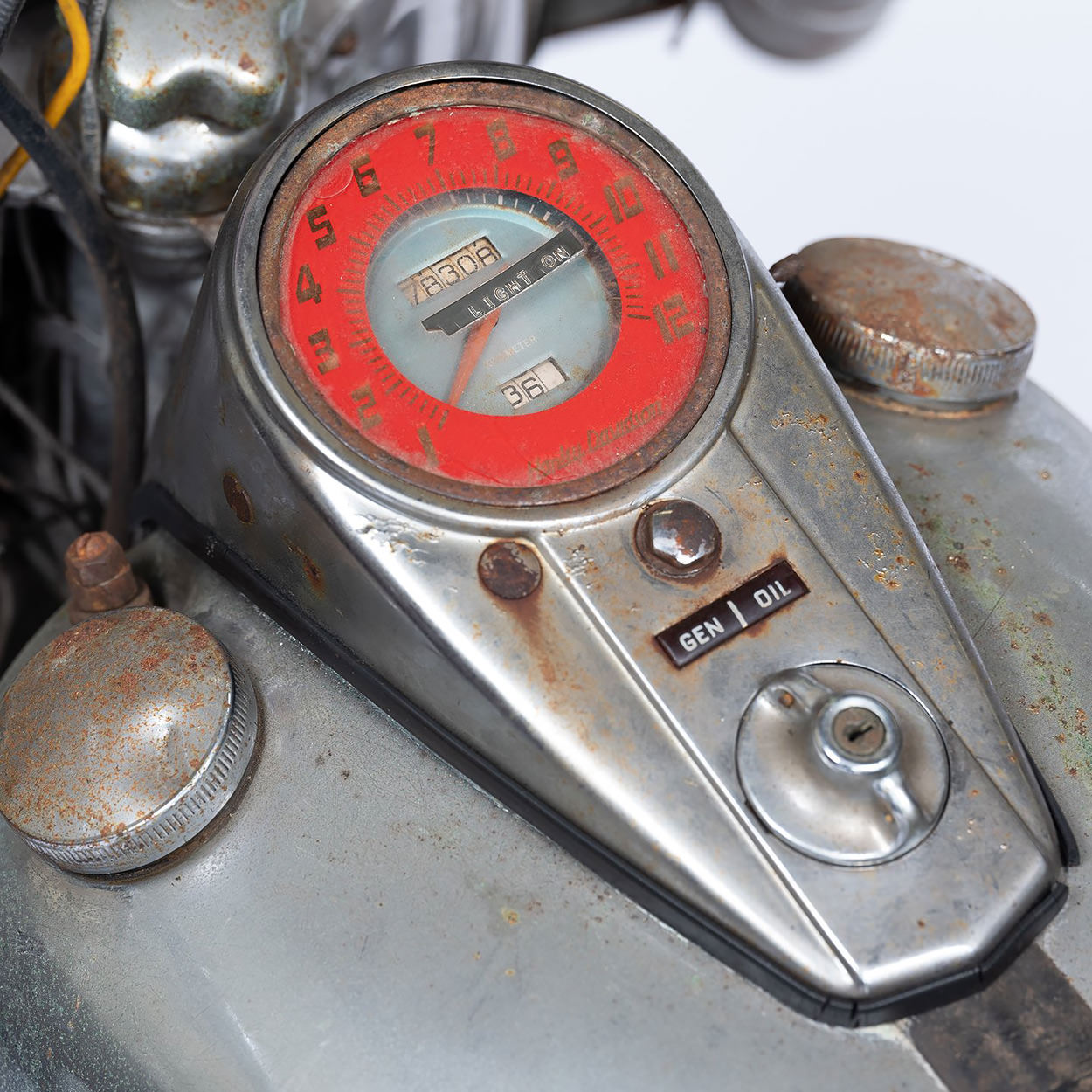 The Panhead itself is a startling time-capsule runner, with every modification, adornment, scratch and scar still proudly on display.

While all vintage motorcycles have a story to tell, few are as relevant or important as the tale behind this gorgeous vintage Harley. You should read about it here.