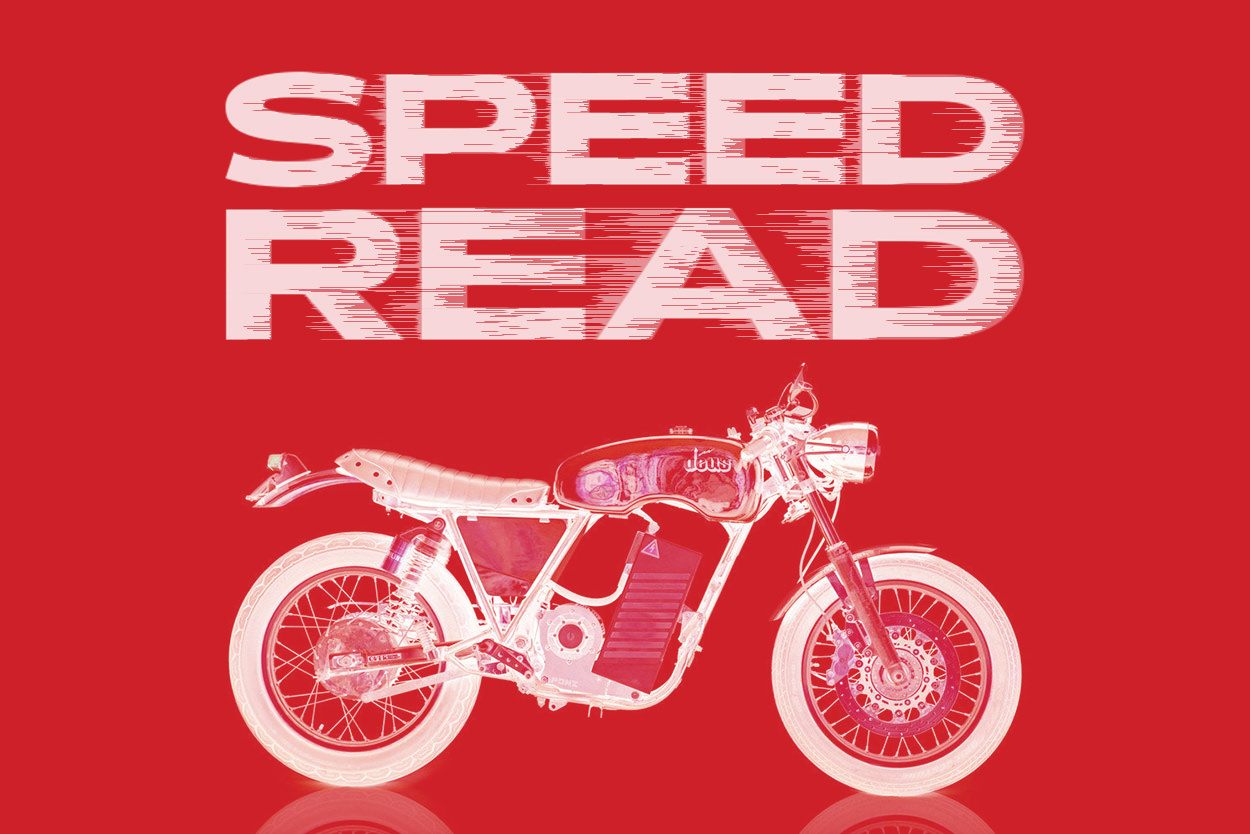 We’ve got them in all shapes and sizes this week—from a Yamaha SR500 that’s gone electric, to a BMW R nineT built for a surfer. We also take a look at Mr Martini’s latest project, and a pair of vintage flat trackers from the Mecum auction in Las Vegas. 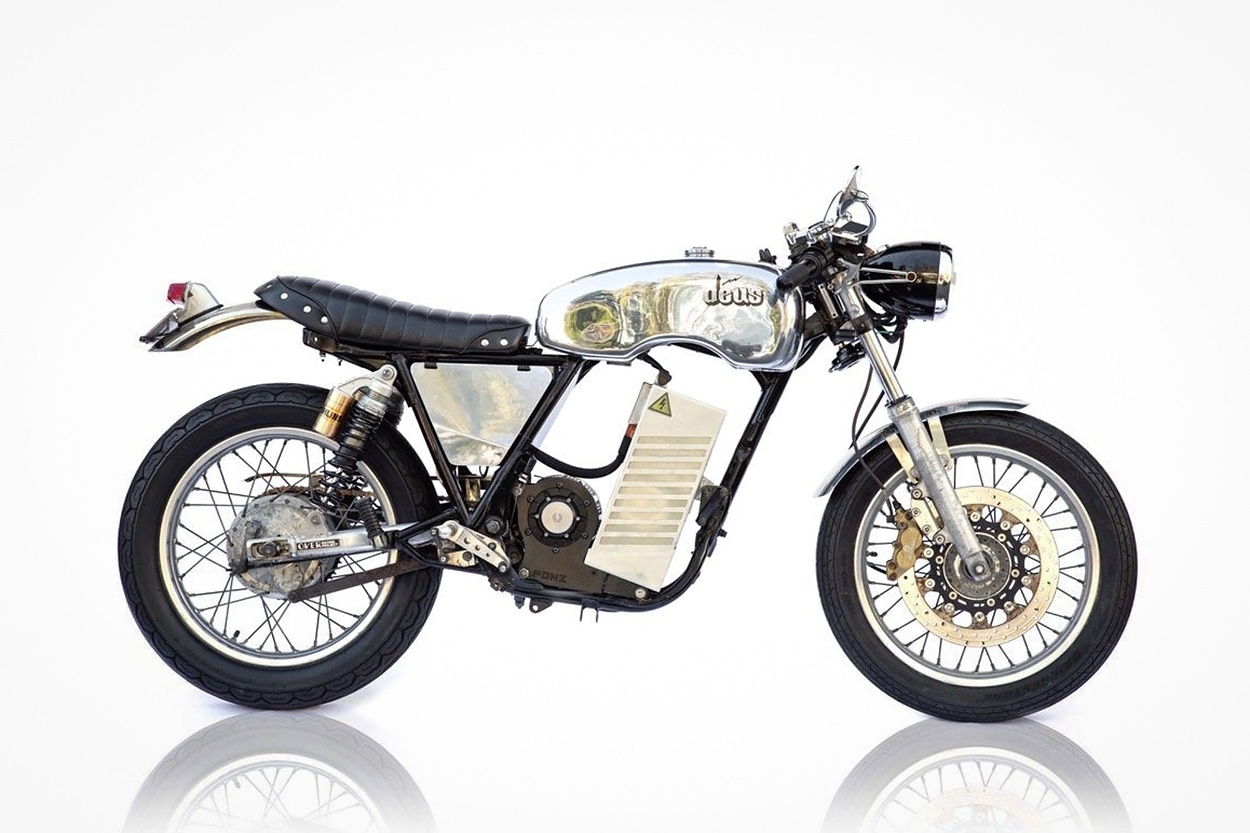 Yamaha SR-E by Deus ex Machina It’s rare for a custom shop to have one of their builds back in for a makeover—and rarer still for the job to include an electric conversion. But that’s the story with this electric-powered Yamaha SR500 custom from Deus ex Machina.

This Yamaha belongs to a long-time friend of Deus, and was the first custom bike to roll out of their original workshop in Camperdown, Sydney. The client recently got in touch with head wrench Jeremy Tagand, and raised the idea of converting it to electric. So Deus stripped out the original motor and got to work. 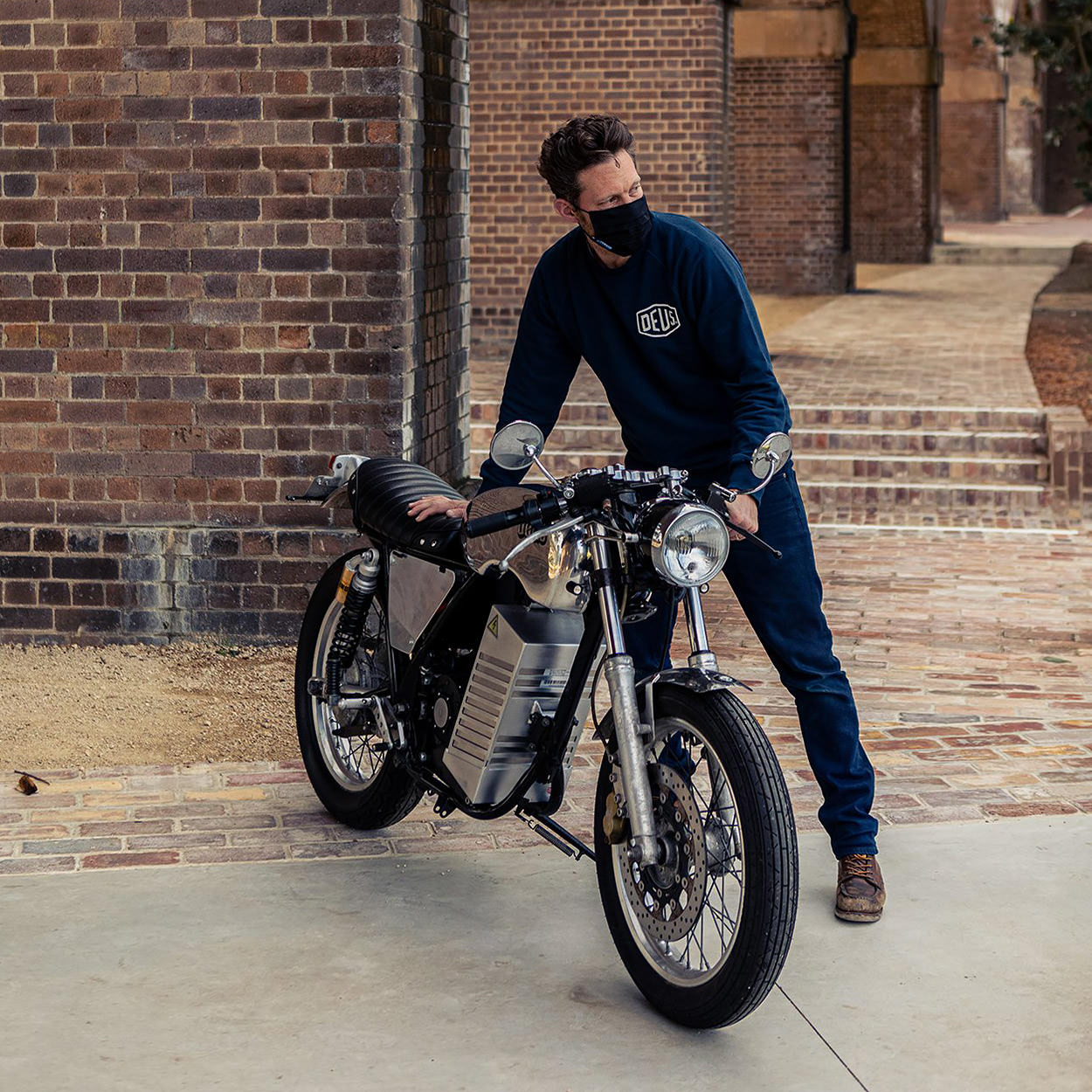 A call went into the Australian electric motorcycle company, Fonz Moto, to order a custom battery and motor combo that would fit the SR’s small frame. They came back with a 72V 3000W motor, and a 3.3KwH battery. With a new controller in hand too, Deus started piecing the SR back together.

To avoid having to modify the frame too much, Deus used laser cut motor mounts that let them bolt the new bits to the existing engine attachment points. It also made it possible to hook up the new power plant to the original chain drive. 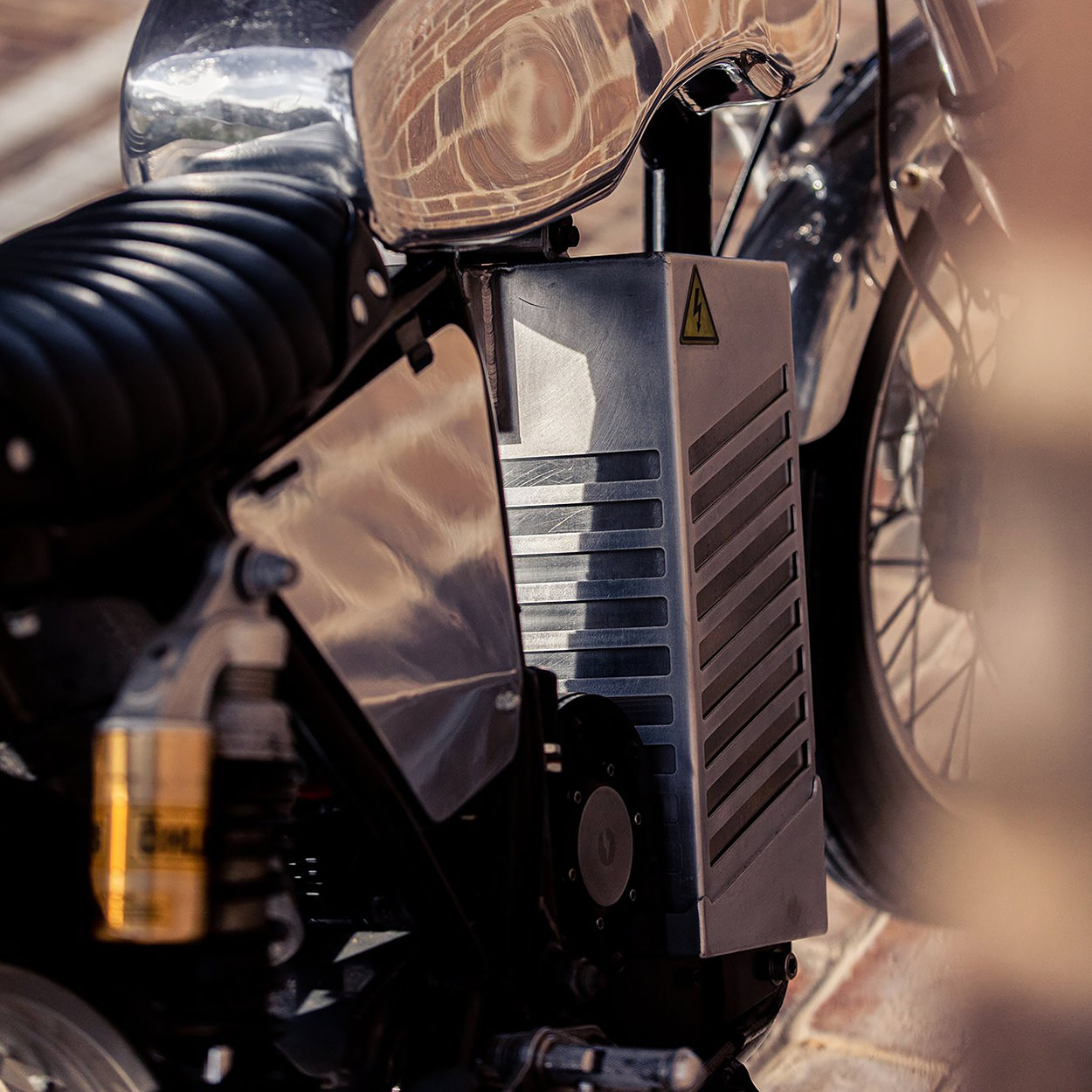 The cockpit was tweaked with a new throttle, and a regenerative braking lever where the clutch lever used to be. The rest of the work focused on cleaning up 15 years of regular use. Deus also fabricated new side covers to hide the controller and wiring, and re-polished the tank.

Once the Fonz team had wired it all up, the bike headed out for its initial shakedown. 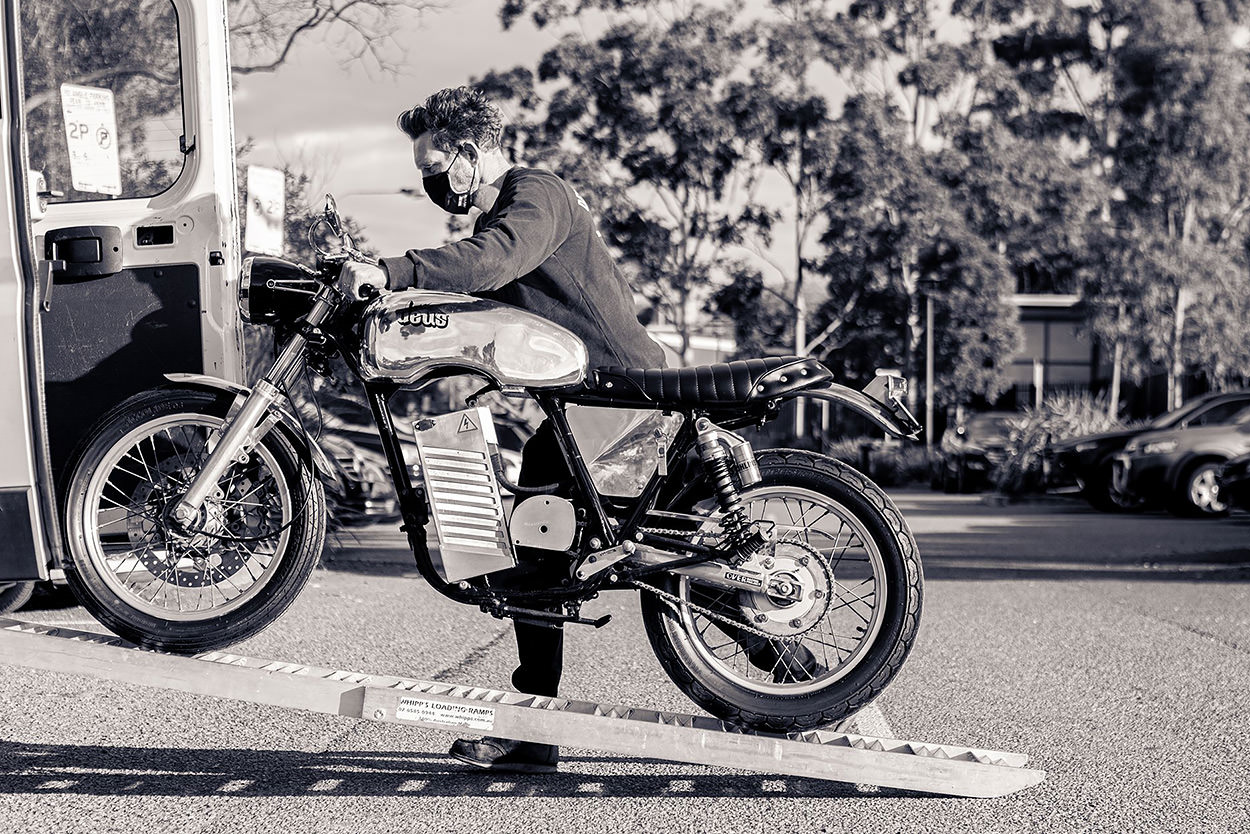 Deus report that it’s “lightweight, torque and smooth,” with a top speed of 100 km/h and a 100 km range. It even has a reverse gear now, too.

Drop-in electric conversions are a great way to revive old bikes, and the concept is executed beautifully here. Although we’ll admit: a Yamaha SR500 café racer that doesn’t make a racket is a little weird. [More] 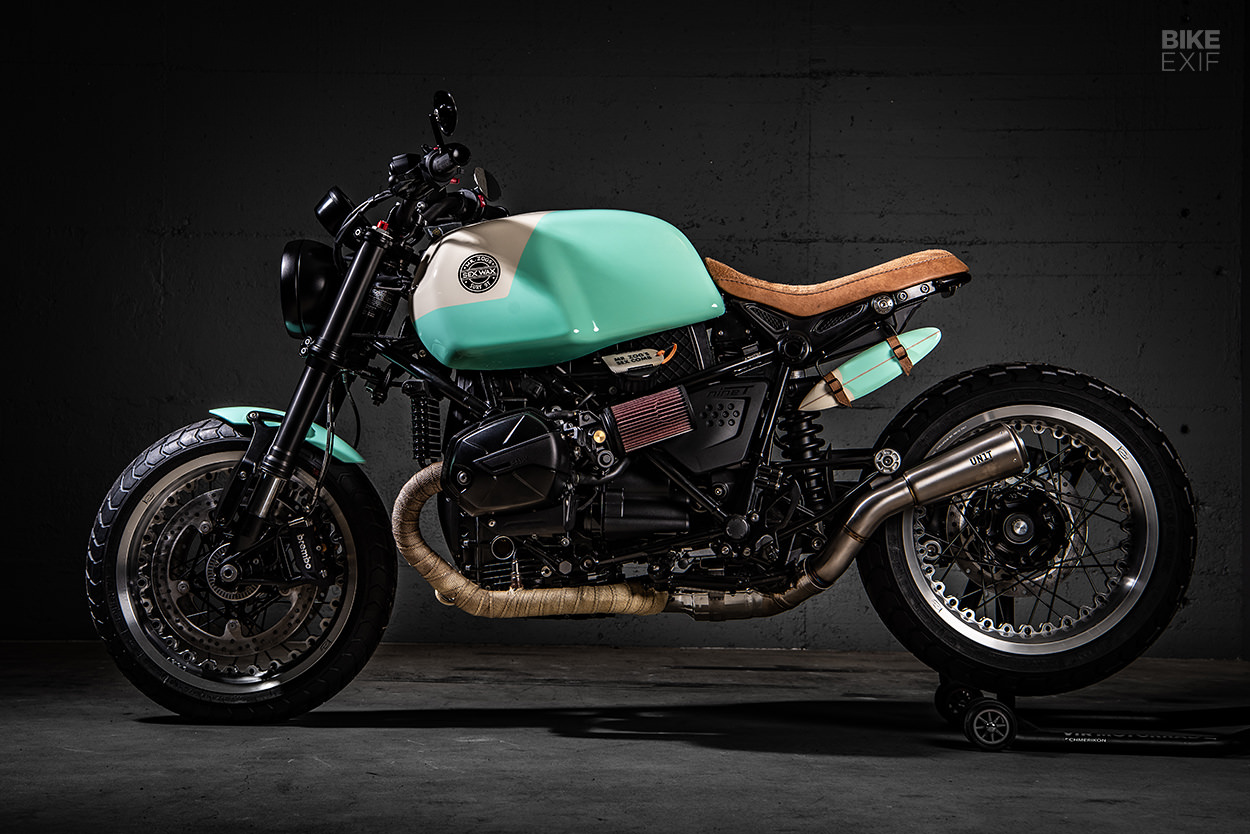 BMW R nineT by VTR Customs We’ve seen surfboard racks on motorcycles before, but we’ve never seen a custom bike design that was inspired by a surfboard. This BMW R nineT was built by the Swiss maestros VTR Customs, and mimics the owner’s favorite board.

It’s a tidy build, with the biggest visual hit coming from the Unit Garage ‘/7’ fuel tank. It’s a bolt-on kit, designed to evoke the tanks of older R-series boxers—and it looks great here. 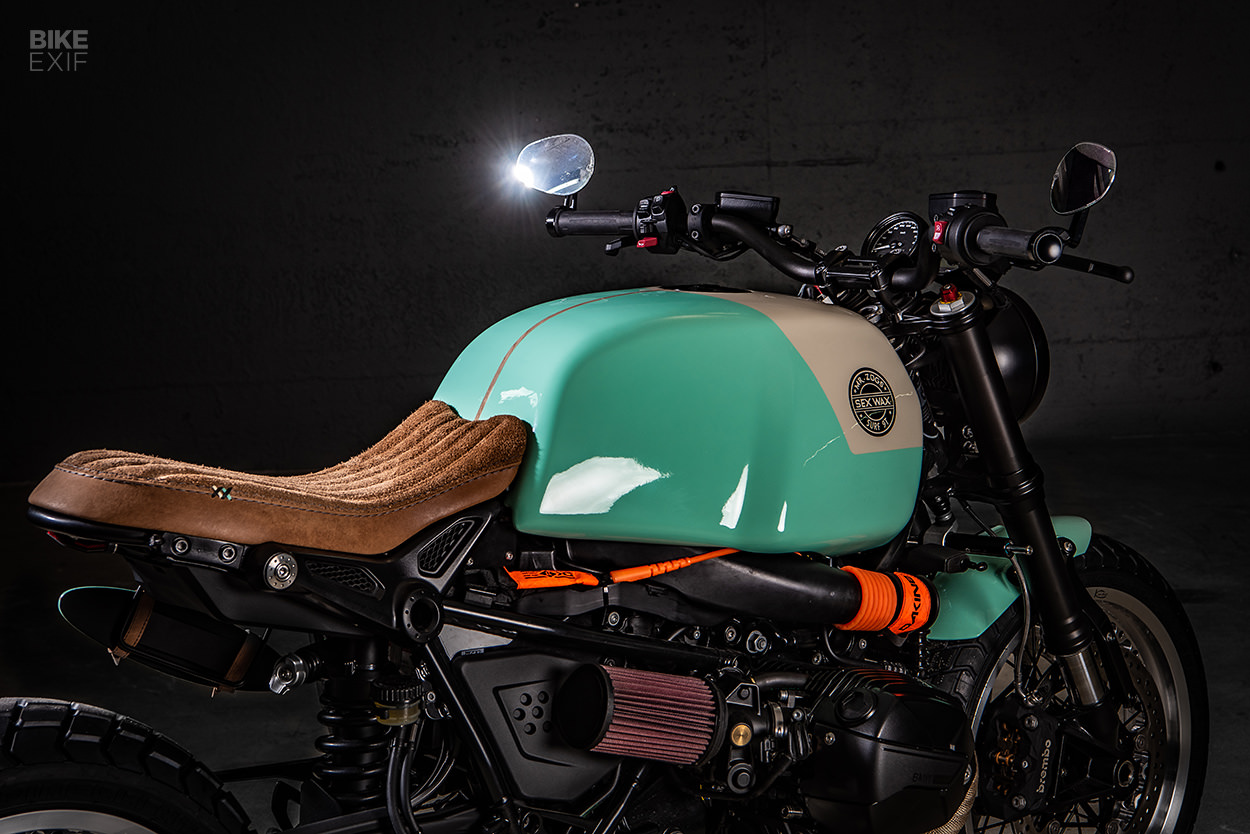 VTR also tidied up the nineT’s tail end, by detaching the removable subframe and bolting on a custom rear loop. Up top is a one-off seat, with upholstery by regular collaborator, Yves Knobel. Finishing off the rear are discreet Kellermann LED taillight and turn signal combos, and a swingarm-mounted Rizoma plate holder.

The nineT’s boxer motor now breathes in via a pair of K&N filters, fitted with a VTR kit that includes side covers to blank off the area where the airbox used to sit. The exhaust system is a titanium two-into-one arrangement from Unit Garage. 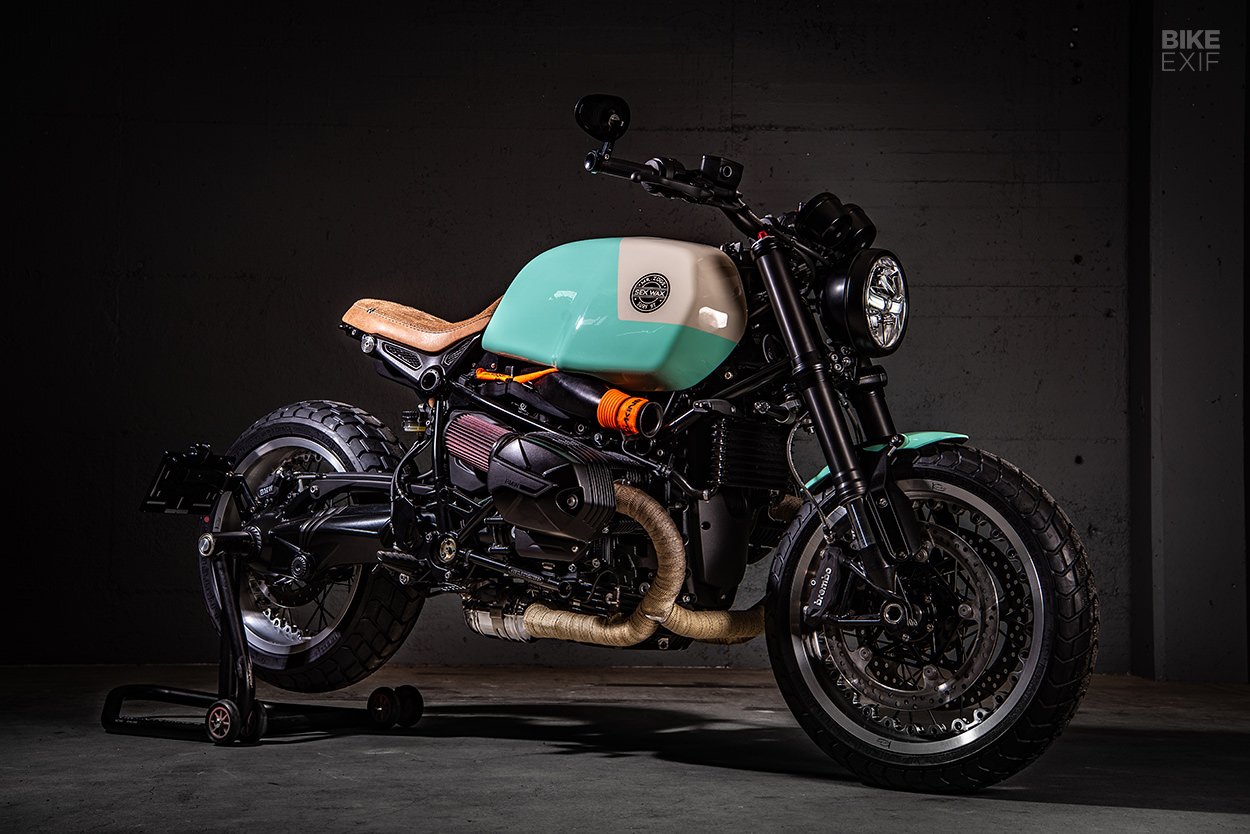 The bike’s kitted with a handful of drool-worthy bits and pieces. 17” Kineo wheels are wrapped in Pirelli MT 60 RS tires, with a VTR Customs fender doing duty out front. This nineT came specc’d from the factory with an adaptive LED headlight, and VTR have added Motogadget mirrors to keep the cockpit tidy.

Then there’s the paint job—a direct copy of the client’s surfboard, right down to the wooden stripe running over the top of the tank. It’s a cracking job by Freuler AG, who also adorned the tank with a pair of ‘Mr. Zog’s Sex Wax’ logos, with ‘Surf 9T’ snuck into the design. Most of the hard parts were powder-coated black, to help the livery pop. 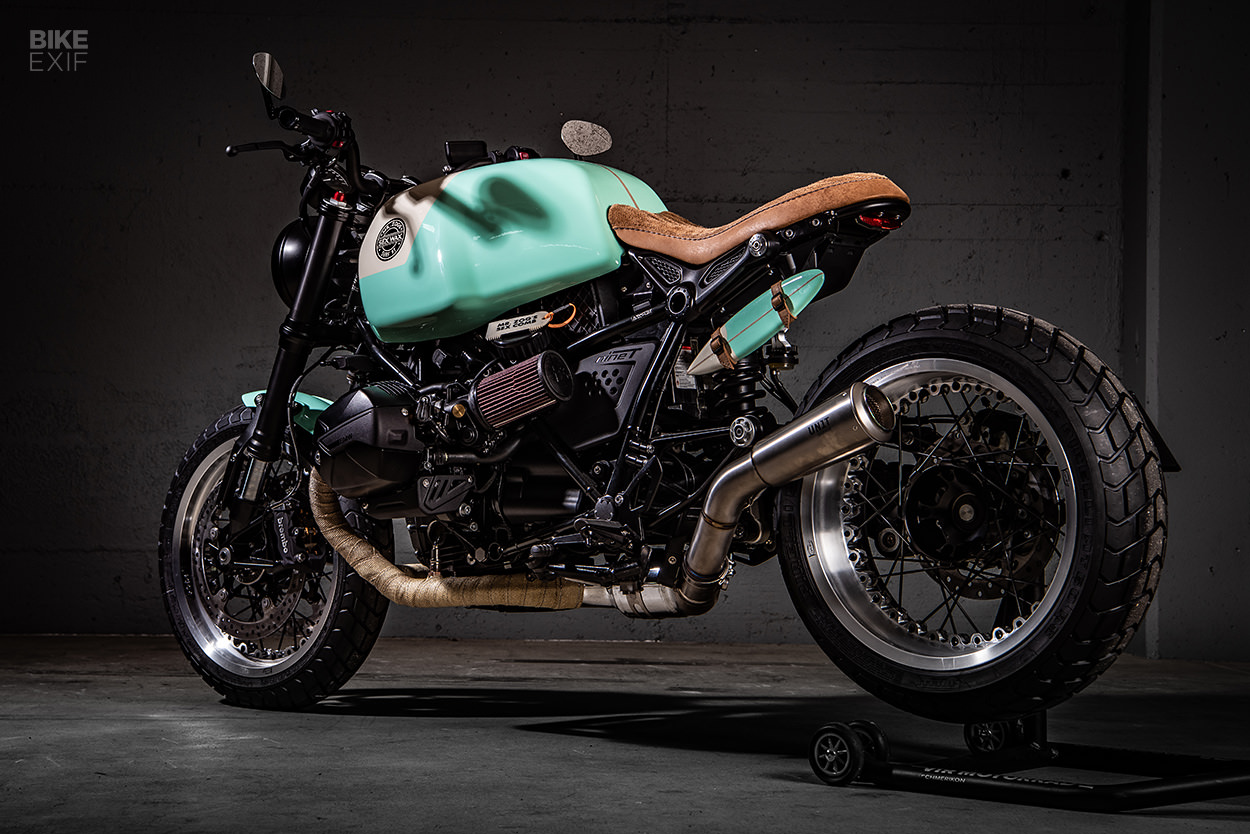 VTR Customs finished the build off with a few quirky nods to the board that inspired it. There’s a DaKine surfboard leash attached on the right, a wax comb on the left, and a scale model of the actual board attached to a removable rack at the back. 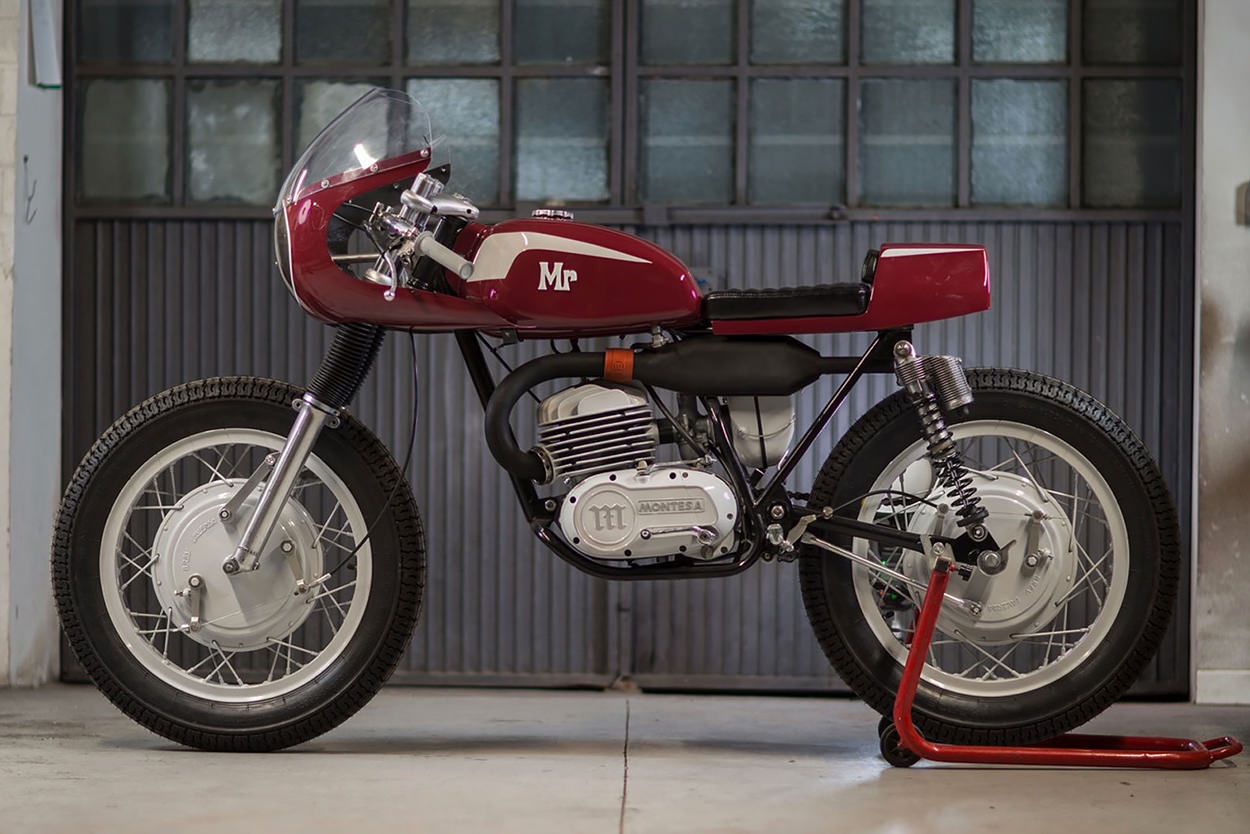 Montesa Cota by Mr Martini Nicola Martini’s known for his aggressive, unconventional custom builds. So by his standards, a classy little café racer like this one feels a bit safe—until you realize that it started out as a trials bike, and it glows in the dark.

You’re looking at a Montesa Cota 247—a 247 cc two-stroke single that made a name for itself back in the day on the European trials circuit. Nicola picked the Cota because, even though he’s being doing this for 25 years, he’s never customized a Montesa. The reason is simple: he prefers road bikes. 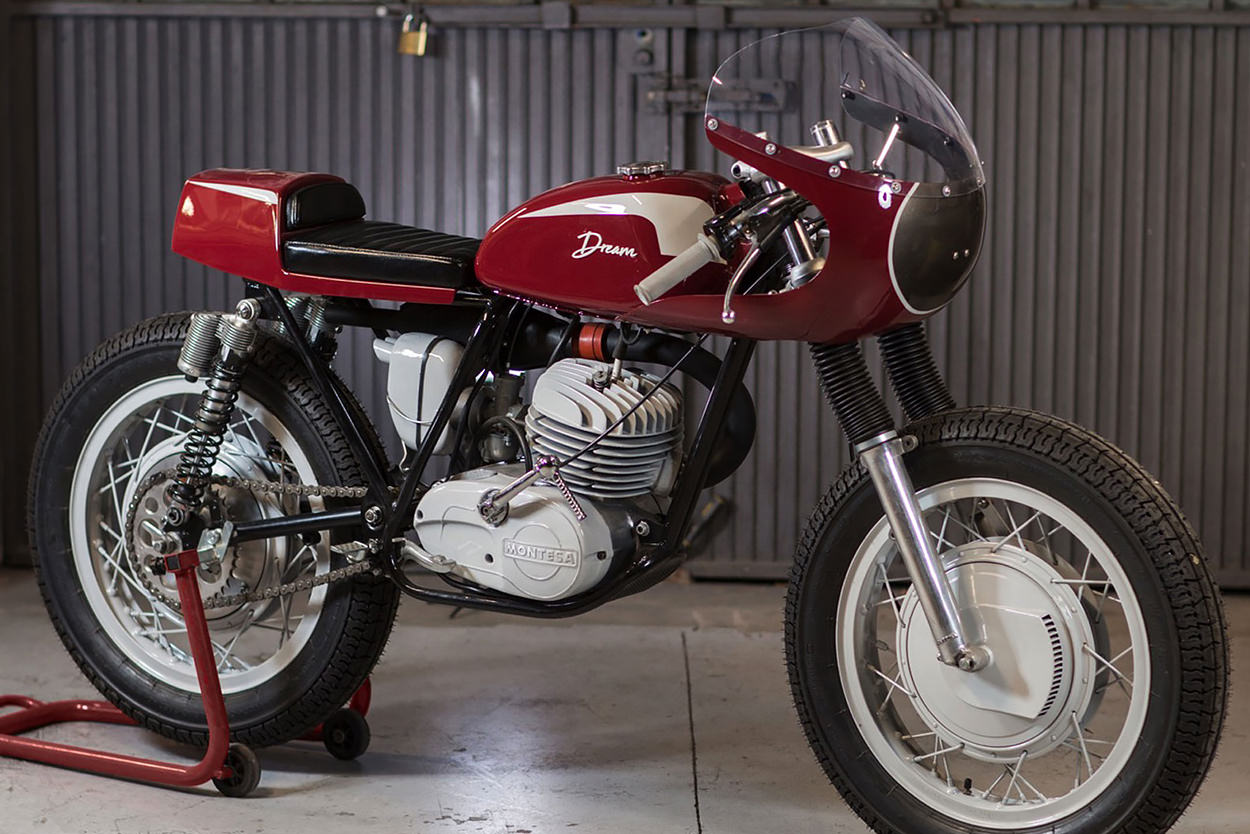 The project was done in collaboration with the Italian motorcycle website Moto.it, and eBay—so Nicola went to the latter to source his parts. To make it interesting, he limited himself to just parts from the 1970s. And since he was converting a trials bike to a vintage track racer, he needed some pretty specific bits.

Nicola installed classic Marzocchi shocks to prop up the rear end, and rebuilt and lowered the OEM forks to perfect the stance. The wheels use matching 18” Borrani alloy rims, laced to Laverda SF750 drum brake hubs and wrapped in Metzeler Block-C tires. 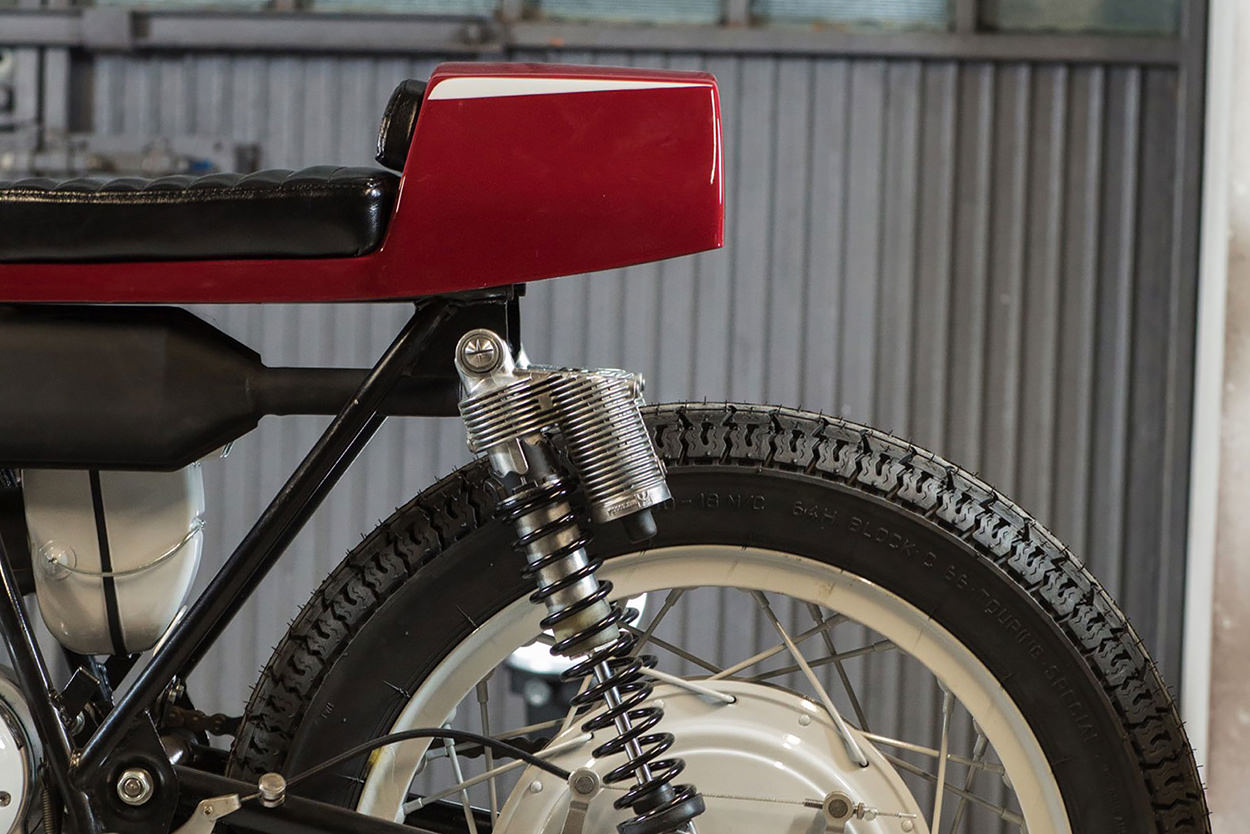 Up top is a vintage fuel tank from a Maico motocross bike, matched up to a new fairing and tail section, built just for this project. The seat was topped off with leather by Tommaso di Casaro, while the Montesa’s high-and-wide bars were swapped for Tommaselli clip-ons. Nicola rewired the whole bike too, and tweaked the airbox to eke out more power. 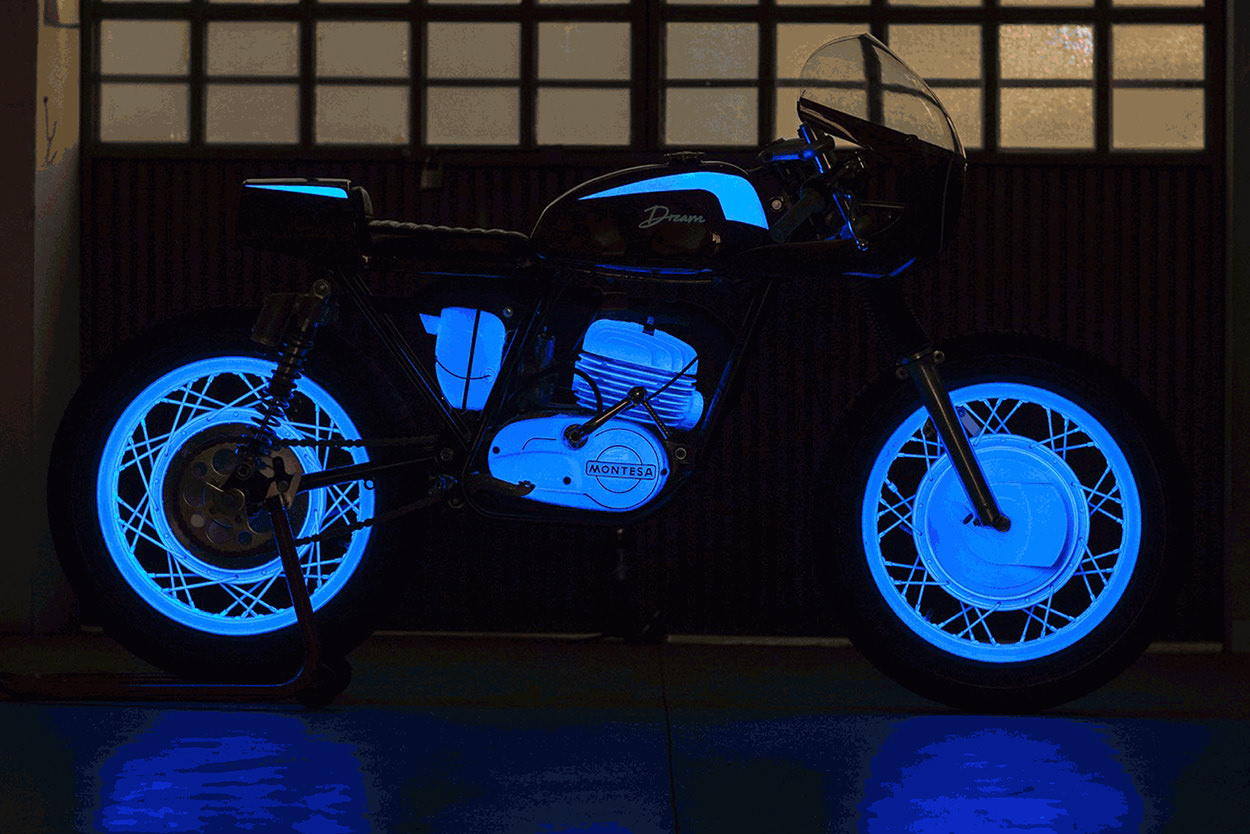 Then there’s the paint job, done by Claudio Tonel at Garage 66. On the surface it looks like a run of the mill café racer scheme—albeit a really neat one. But the engine, wheels and tank graphics have all been done in a special photoluminescent paint, so that they glow in the dark.

It’s just the sort of twist we’d expect from Mr Martini. Bravo! [Via] 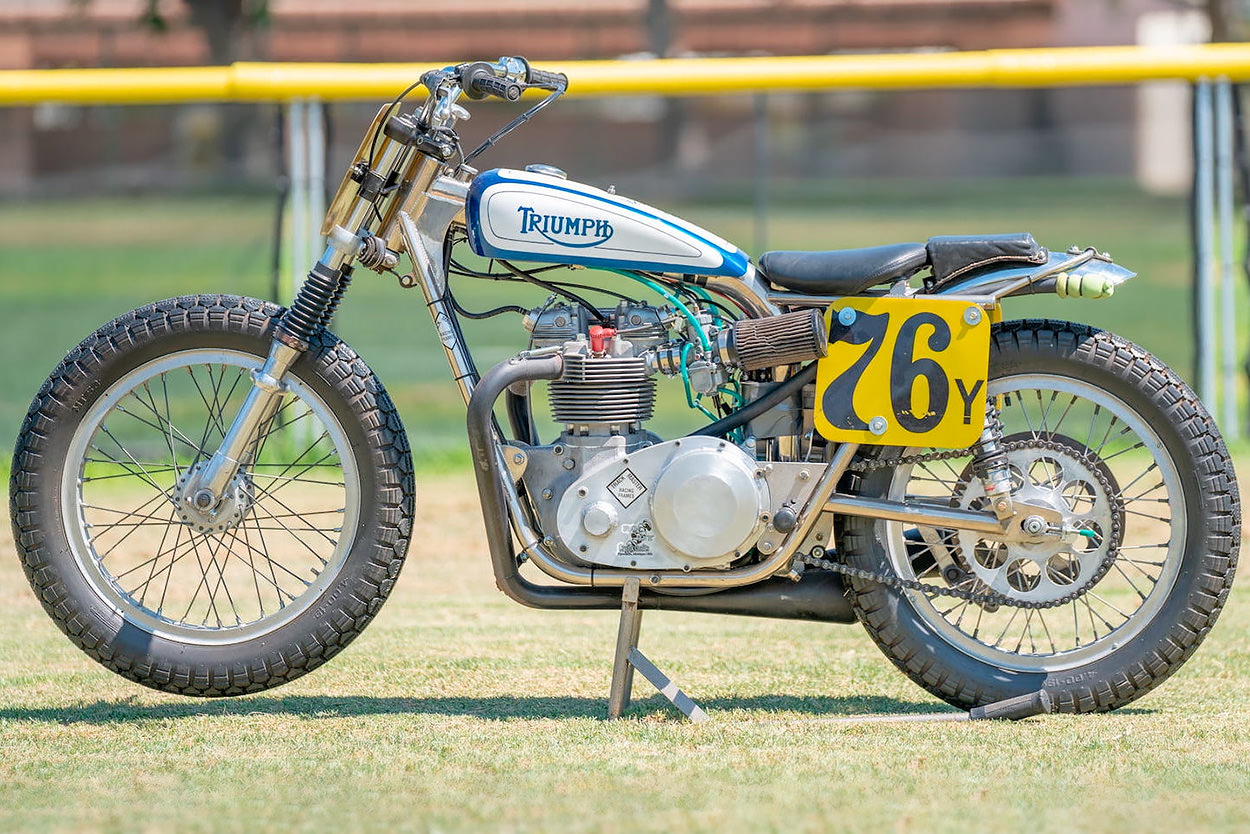 Vintage Trackmasters at Mecum Las Vegas Auction house Mecum wrapped up their Las Vegas event yesterday, and our friends at Silodrome caught wind of two stunning vintage flat trackers that we wished we were taking home. One’s a Triumph and the other’s a Yamaha—but they both feature frames from the famed American chassis company, Trackmaster. 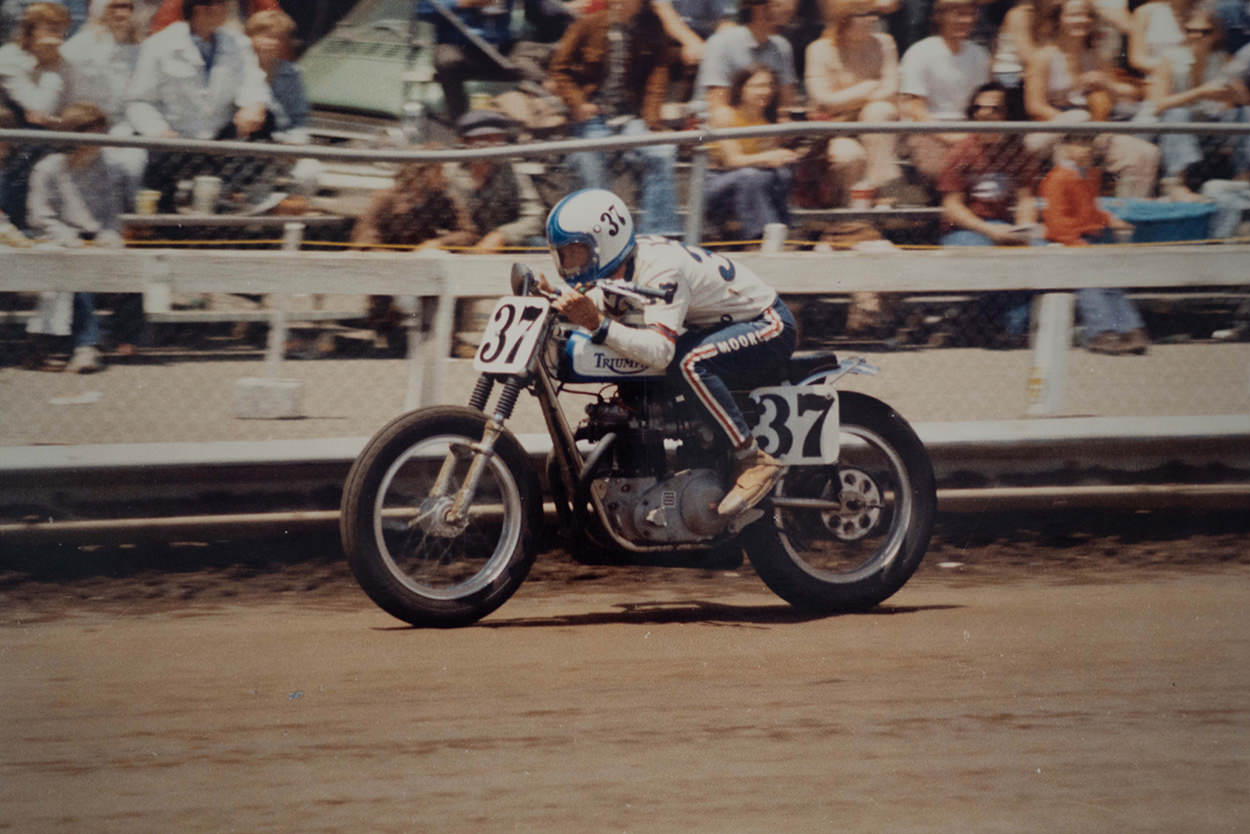 The Triumph was built in 1972, and boasts a proper race heritage. Built by Trackmaster founder, Ray Hensley, and his team, it was piloted by Ron Moore to a win (and new record) at the Ascot TT circuit in Gardena, California. 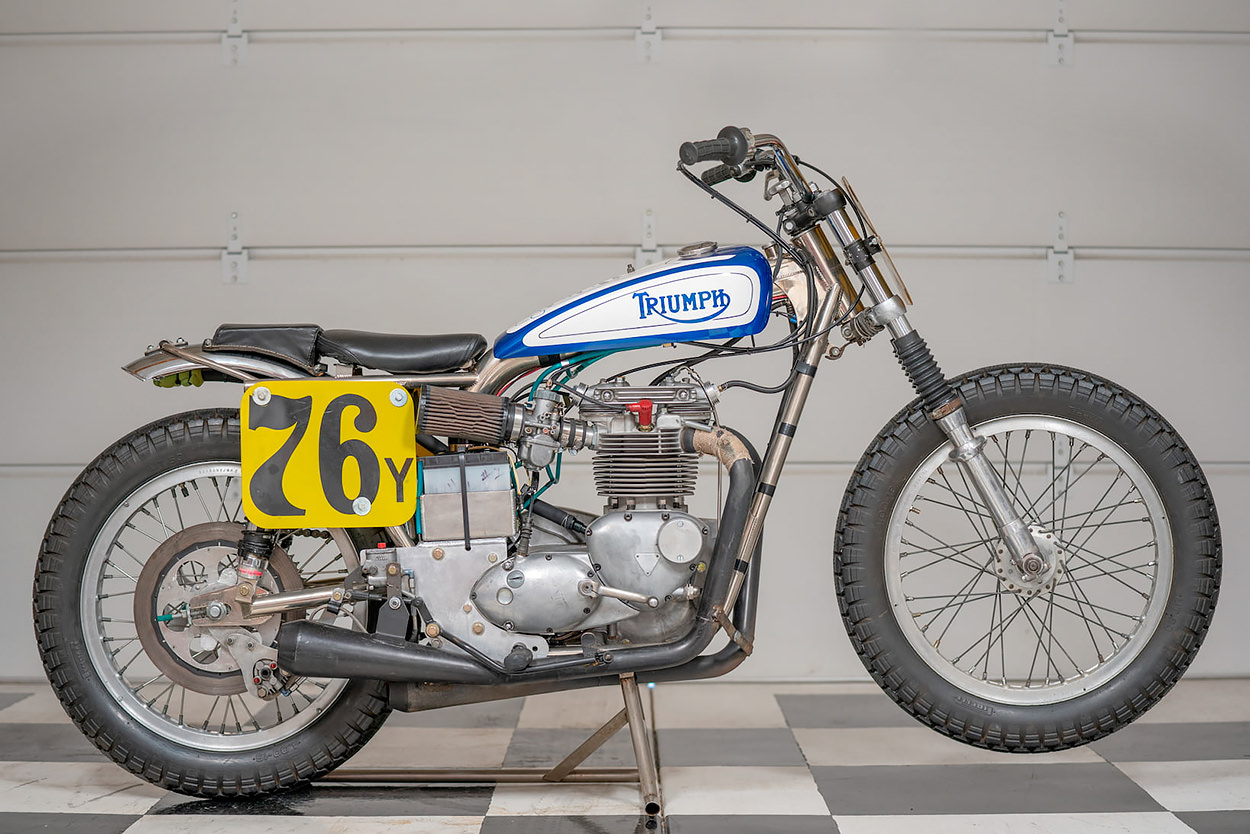 It’s bundled with some notable memorabilia—including Tony Denius’ stopwatch, a second motor on a display stand, vintage race wrenches, extra wheels and tires and even a hot shoe. [More] 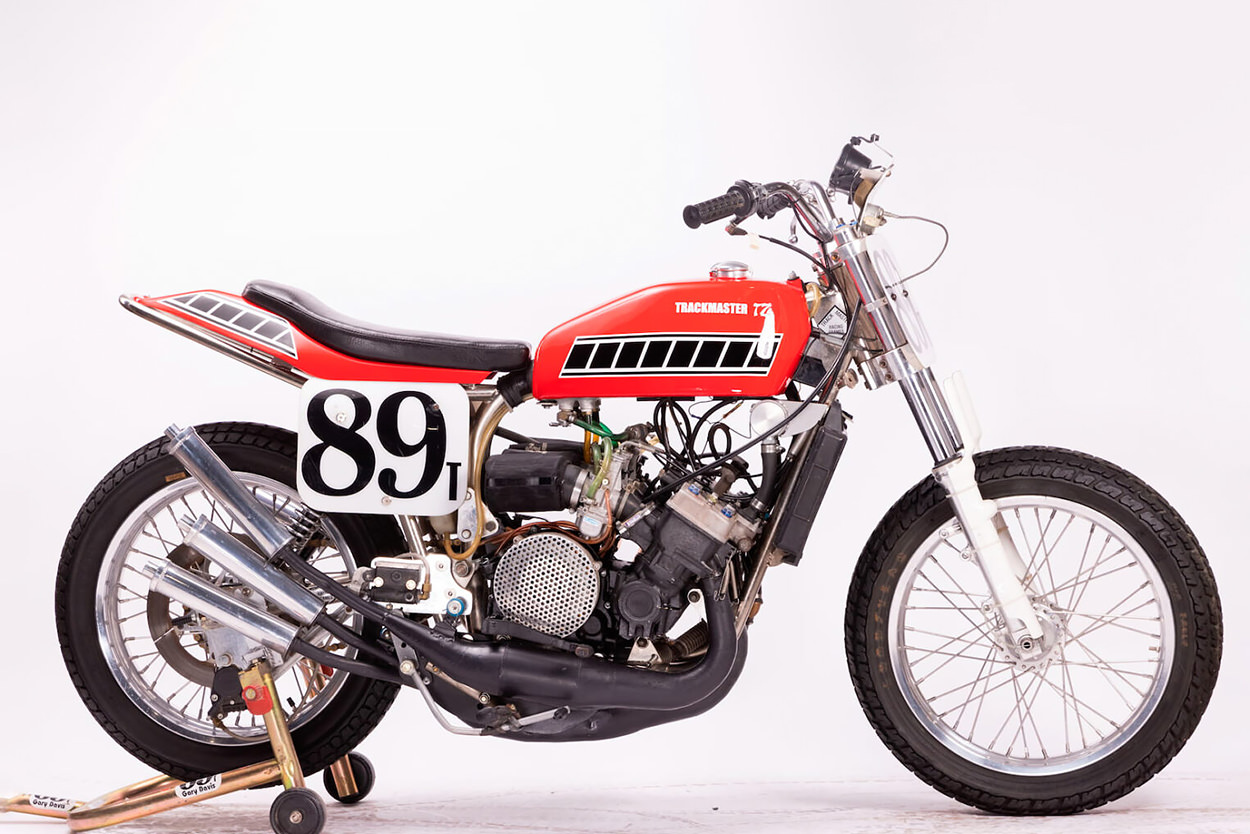 The Yamaha on auction doesn’t boast the same pedigree, but it’s no less impressive. It was built by Gary Davis—an AMA hall of famer, retired pro racer and motorcycle daredevil. He went on to become a Hollywood stunt rider with over 280 movies, 250 TV episodes and 190 commercials to his name.

From what we can gather, this motorcycle was built in recent years to partake in vintage flat track racing. And it’s a beast, powered by Yamaha’s fearsome TZ750 inline-four two-stroke engine. It’s also sporting Mikuni flat-slide carbs, upgraded reed assemblies, and a full set of hand-made exhaust expansion chambers. 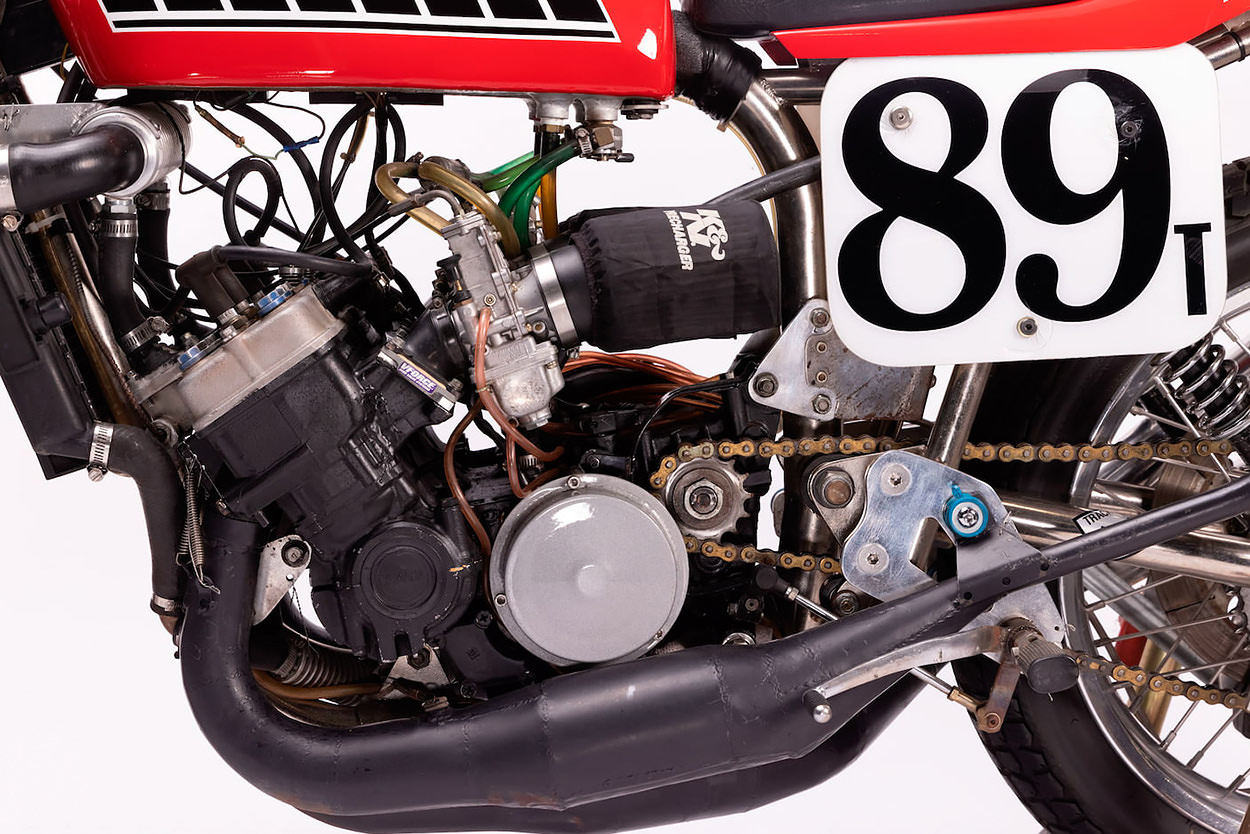 It’s all packaged with classic Champion-style bodywork, and a tasteful nickel-plated Trackmaster frame. And it’s finished in a red Speedblock livery, naturally. [More]

Given the choice, which would you pick: the Triumph or the Yamaha? 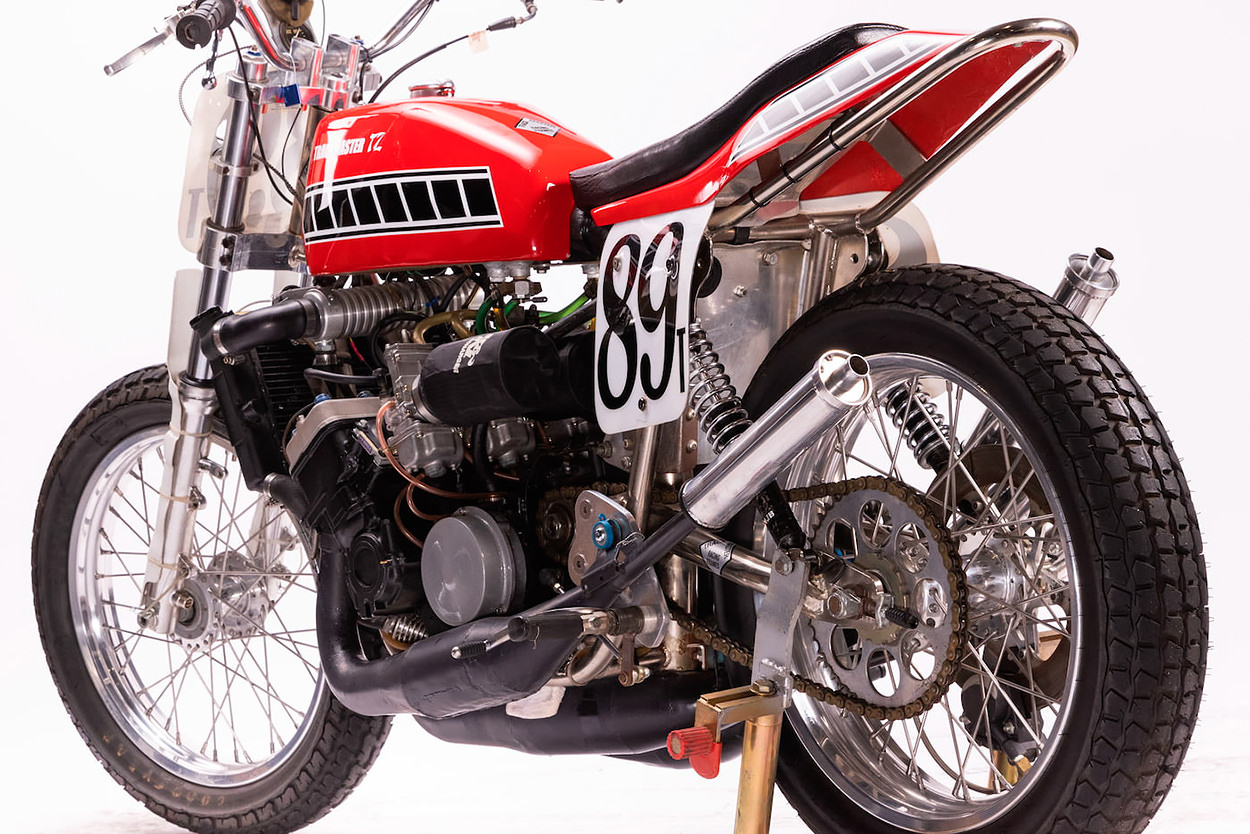