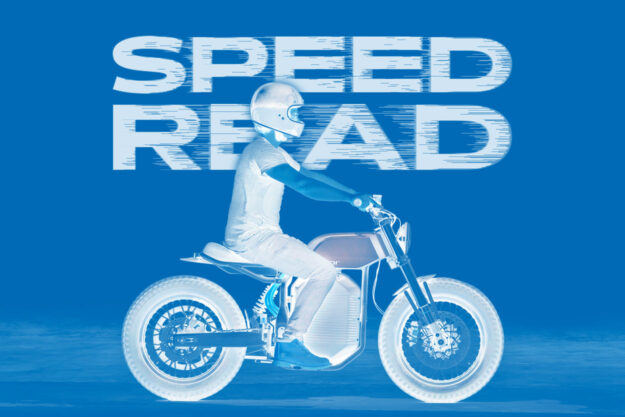 We’re shaking things up this week, by dropping our weekly round-up on a Saturday. Feast your eyes on a mean XJR1300 from Romania, a zesty Dominator flat tracker from Germany, and a short film featuring Untitled’s Zero XP. 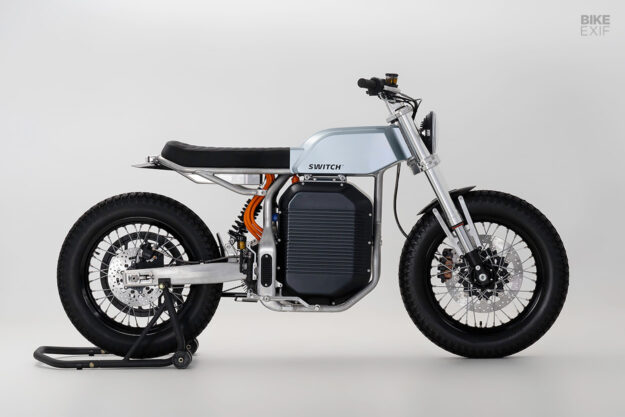 The Switch eScrambler enters production Switch melted our servers when they revealed their eScrambler concept two years ago, and it remains one of our all-time favorite electric customs. Now they’ve put the work in to make that concept production ready. 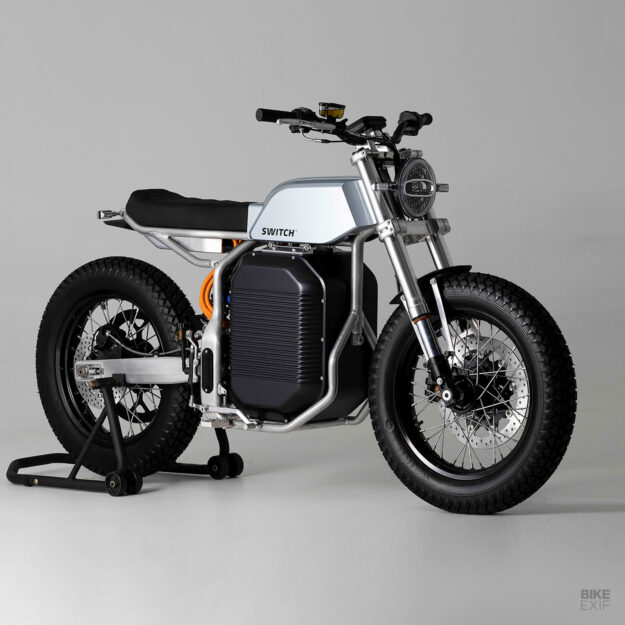 Making the bike ready for production meant having to produce tooling and molds that Switch’s factory could use to reproduce each part in bulk. But on the up side, Matthew always had production in mind—so much of this was taken into consideration at concept phase.

The team fine-tuned everything from the geometry to electronics to get the eScrambler pitch perfect. The swingarm pivot’s been moved, the rear shock mounts have been relocated, the suspension travel has changed, and the rake has been increased. The bike now runs with J.Juan brakes equipped with ABS, and a beefed-up Gates belt drive. 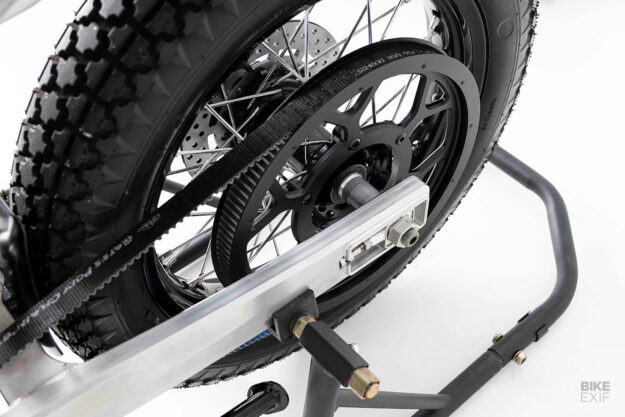 The seat’s been reshaped and kitted with new silicon foam, and there’s also a new, and very discreet, cooling tray beneath it. And although mirrors, full-sized fenders and a plate holder aren’t shown in these photos, they will ship with each bike.

Powering the eScrambler is a 50 kW motor that’s good for around 70 hp and a top speed north of 100 mph. Predicated range is upwards of 90 miles, with a charge time of four hours to reach 90% capacity. The considerable amount of electrical components needed to run the eScrambler are all neatly packaged under the bike’s faux fuel tank. 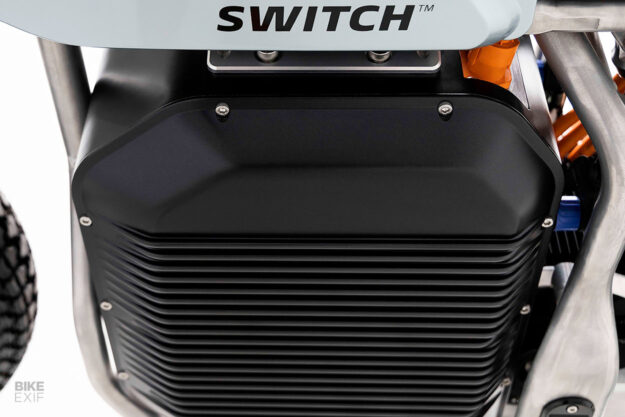 But the eScrambler’s big drawcard is its charming, minimalistic styling, which hasn’t changed too much from the concept. Matthew was heavily influenced by the burgeoning custom scene when he first penned it, particularly bikes like the Yamaha SR500.

“Like the old Yamahas, I wanted a product that people would be ripping apart in 30 years,” he says. “I want that people will be updating it with 2050 tech and styling, and in the process saying ‘wow, whoever designed and engineered this was really paying attention to detail’.” 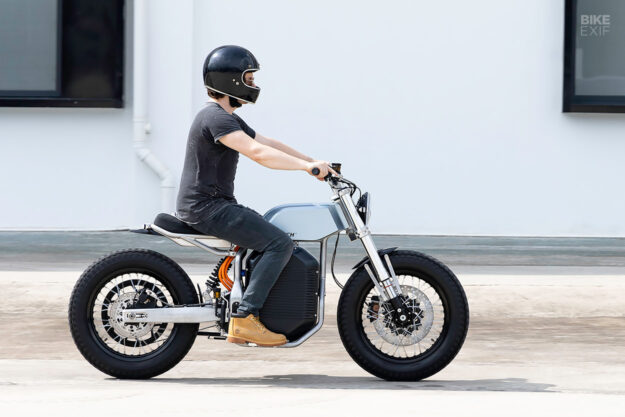 “The riding position is set up for a trip down to the local café for a flat white, so with speed like this the bike is not for the faint hearted. Luckily we have the riding modes to make it a bit more sane, and I’ve decided that we will make a few adjustments, like limiting the top speed.”

With backing from both an investments company and an RND firm, Switch have just launched pre-orders for the eScrambler on their new website. 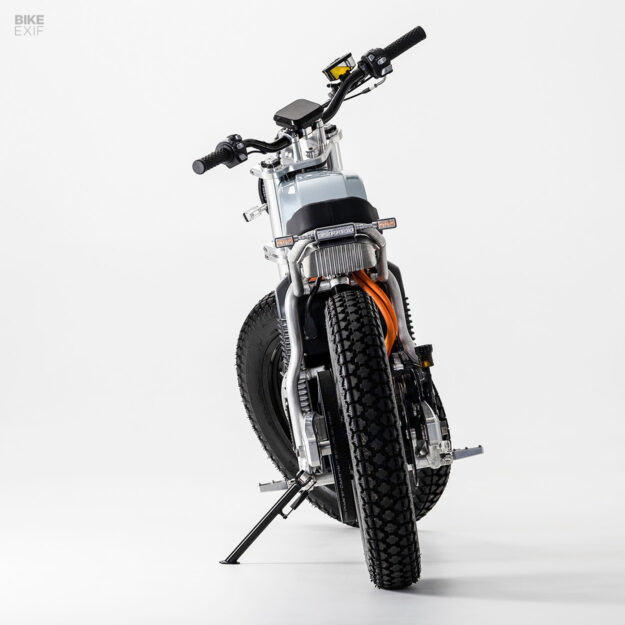 Units are expected to ship to the USA, Australia and New Zealand in the first quarter of 2023, and in Europe before the end of 2023, at a retail price of $11,999 (excluding shipping or import duties).

Switch also plans to have demo bikes to ride in various locations around the world. With any luck, we’ll swing a leg over one soon and report back here. [Switch Motorcycles] 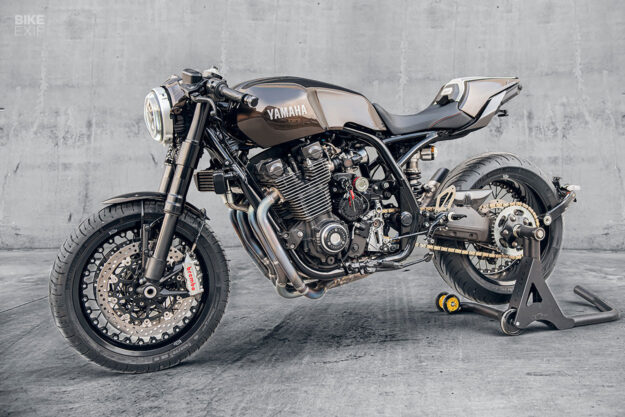 Yamaha XJR1300 by Dezmembrez Moto Few modern classics are as bold as the now-discontinued Yamaha XJR1300. Muscular and purposeful, it pulls on our heartstrings with its unapologetic representation the golden era of the big four. And this custom XJR, from the Romanian custom builder Dezmembrez Moto, dials the boldness up to eleven. 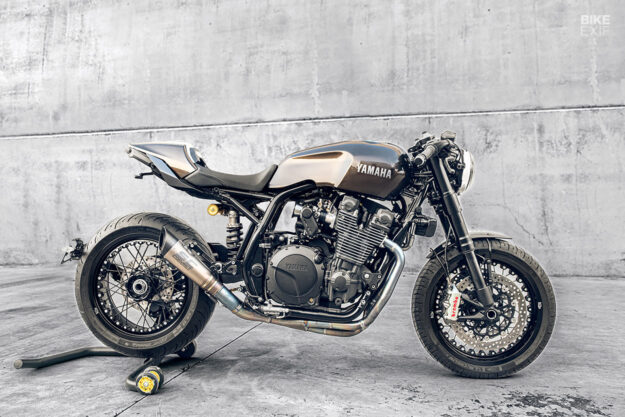 Nicknamed ‘Kojirō’ after the legendary Japanese swordsman, this 2014 XJR1300 is a modern, performance-inspired take on the iconic Yamaha bruiser. One major change is out back, where the XJR’s traditional twin-shock setup was traded for a mono-shock arrangement with a single-sided swingarm. The custom subframe is new, as is the Öhlins TTX shock.

Up front are a set of Ducati Diavel forks, held by WSBK-spec yokes from CNC Racing. The steering neck had to be modified too, to accommodate the new system’s bigger bearings. Also present are a set of spoked wheels from Kineo, stopped by Brembo M4 monobloc calipers. 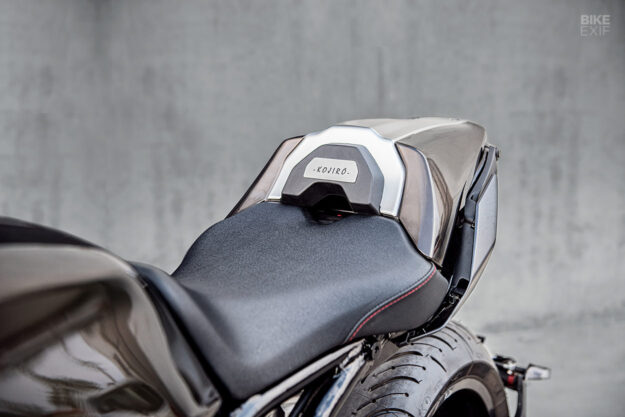 The fuel tank’s been trimmed and remounted, and is complemented by a tail section that was pieced together from plastic bits from four different bikes. The headlight should look familiar; it was liberated from a Ducati Scrambler.

Dezmembrez Moto also installed a Lithium-ion battery, pod filters and a lightweight Antigravity battery, and modified the radiator. The exhaust is a custom-made Titanium affair, terminating in an SC-Project muffler. Robymoto rear-sets, and a sprinkling of Rizoma and Motogadget parts, finish things off. 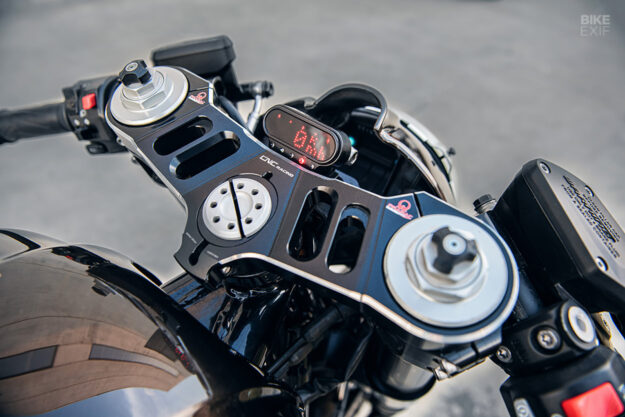 Kojirō simultaneously celebrates the XJR’s legacy while pushing into the next decade. And we bet it’s bananas to ride, too. [Dezmembrez Moto] 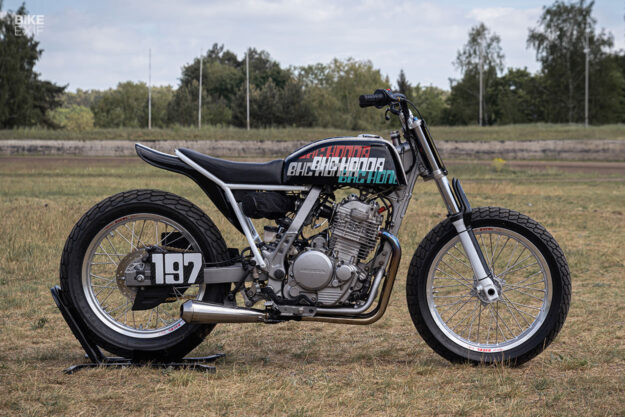 Honda NX650 Dominator by Berham Customs Based in Berlin, Martien Delfgaauw is the man behind Berham Customs, and one of the nicest guys you could hope to meet. And, like many customizers, he’s also a recent flat track racing convert.

Martien raced in Germany’s ‘Krowdrace’ series in the rookie class last year, on a beastly KTM enduro bike. Hooked on the sport, he decided to build something more appropriate for this year’s series. “I had a 1994 Dominator in decent condition with a good running engine, and tons of used parts in the workshop,” he tells us, “so the thought was to quickly put something together pragmatically.” 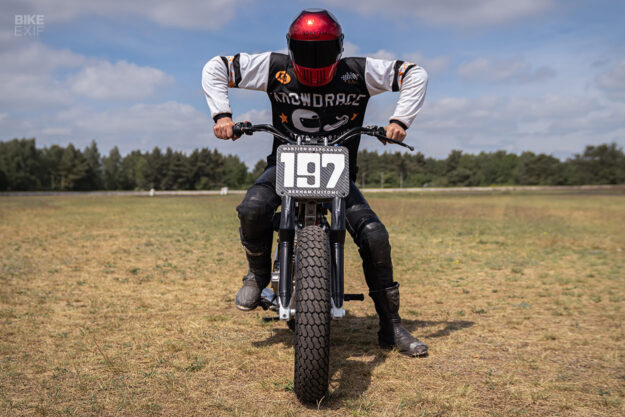 Martien stripped the bike down with the intention of lightly modding the subframe as a starting point. But once the angle grinder hit metal, he started spiraling down the rabbit hole.

“The KTM has a bolt-on rear frame which is great for maintenance,” he tells us. “As easy maintenance is what was my main goal for the Dominator flat tracker build, that’s what I wanted for this bike, too. So the Dominator’s rear frame had to go.” 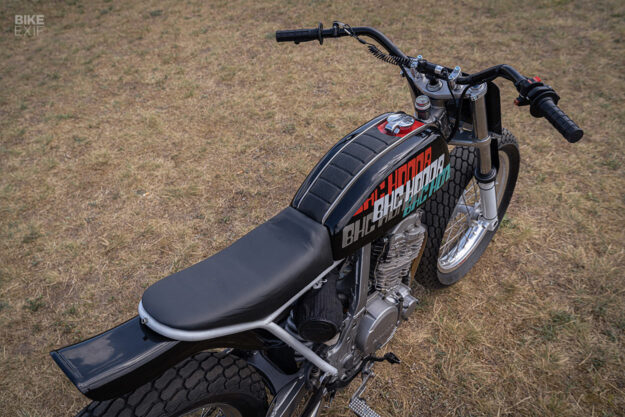 With massive changes to the frame, the choice of what fuel tank to use was blown wide open too. Martien cut open a few old tanks he had lying around to mock them up on the bike, eventually settling on a 70s Honda CB200 unit. With a new tank on, Martien started conceptualizing an overall design for the bike—something he never intended to do.

“I didn’t want to go for a classic flat track look, nor did I want to give it the look of modern flat track bikes. So I had to find an independent design, without sacrificing simplicity, maintenance-friendliness and usability, of course. The core idea was: what could a European flat track bike have looked like, if there hadn’t been any archetypes from over the pond?” 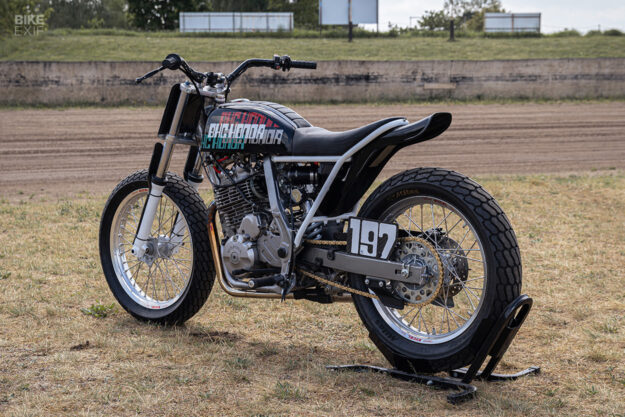 Keeping with this theme, Martien built a new rear fender, shaped on a part that, ironically, came from Maier in the US. It’s a unique look that, together with the petite Honda tank, book-ends the sharp racing saddle nicely.

Martien put work into the Dominator’s running gear too. There’s a YSS shock out back (fitted after these photos), with Yamaha R6 forks up front, with the ride height adjusted at both ends. Marvin Diehl at KRT Framework modified the Yamaha upper yoke to fit the Honda, and to accept a set of LSL handlebars. 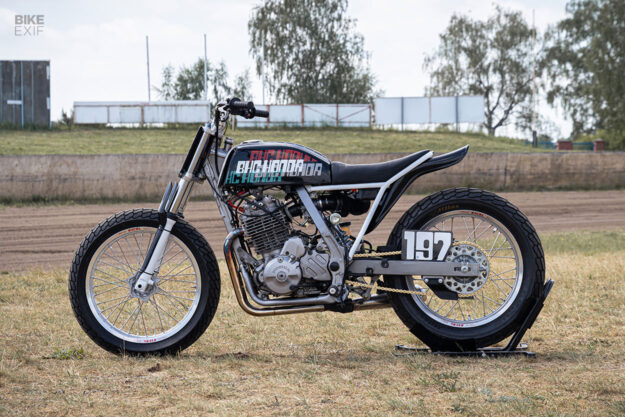 The 19” wheels are a mixed bag; a KTM hub up front, the Honda hub at the rear, DID rims and Mitas tires. Martien had to stretch the swingarm to squeeze the bigger rear wheel in.

The bike was rewired too, and the carb swapped out for a Mikuni part. WB Exhaust in Italy supplied the muffler, which sits on the end of a set of modified Honda racing headers. Martien also fitted oil drain valves from Stahlbus for ease of maintenance. 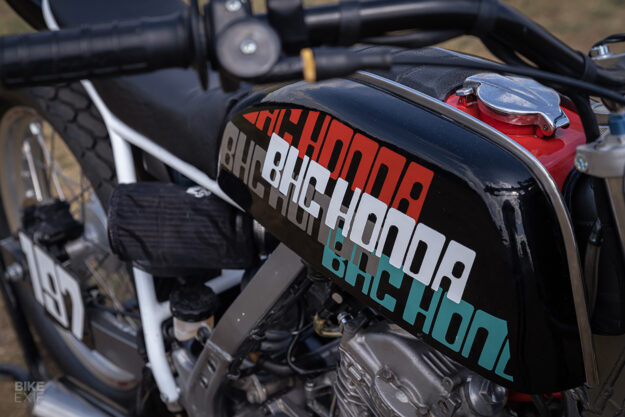 Parts like the foot pegs and carbon fiber number boards were all made in-house. As for the chic livery, that was all Martien too, armed with spray cans and a some stencils. Buttoned up, it’s one of the most handsome, and unique, flat trackers we’ve seen. [Berham Customs | Images by Hermann Köpf] 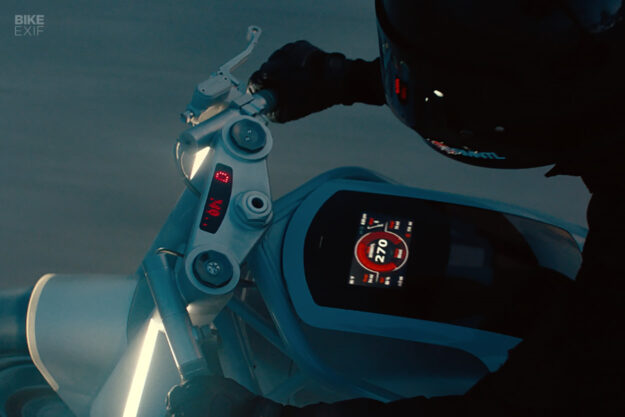 XPRMNTL by Untitled SF Untitled Motorcycles San Francisco’s Zero XP is one of the most striking custom electric motorcycles to hit the scene in recent years. Released three years ago, it eschews traditional motorcycle design in favor of lines that are daring and futuristic. It still turns heads today—which is why Untitled’s Hugo Eccles has made it the subject of this short film.

Titled ‘XPRMNTL,’ this one minute edit was put together by a veritable Hollywood dream team. The director is the award winning W. Spencer Davies, and the director of photography, Daniel Williams, has worked on everything from ads for Porsche to music videos for Machine Gun Kelly. 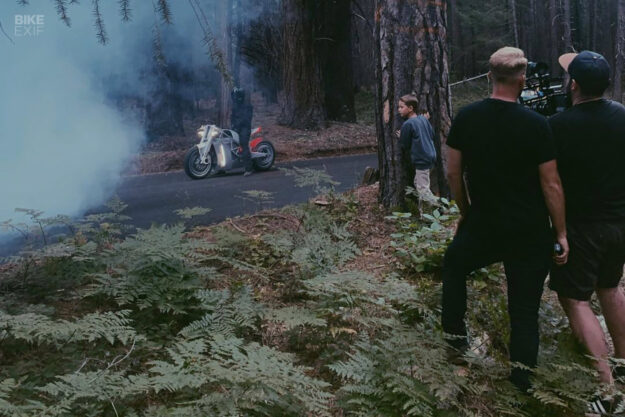 As the title implies, the film itself is abstract—but it’s also a great way to see the Zero XP in motion, set against the backdrop of some stunning visuals.