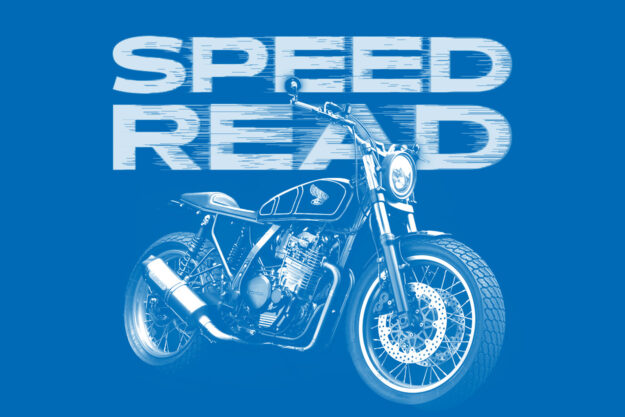 We kick off this week’s compilation with a Honda Dominator from Australia, and finish it off with two electric scooters from Indonesia. Wedged in between are an obscure Japanese BMW lookalike, a two-stroke Yamaha bobber and the holy union of a Buell engine and a Voxan frame. 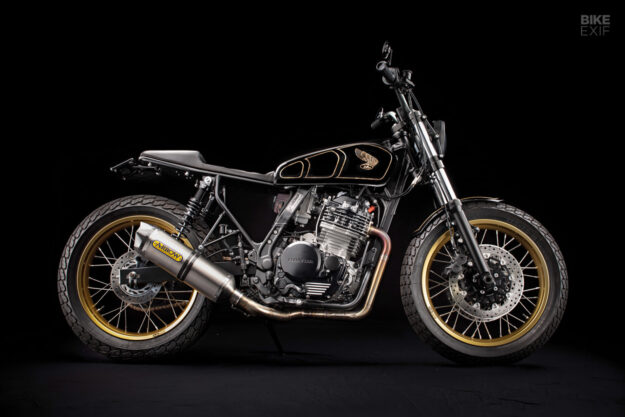 Honda NX650 Dominator by Gasoline Motor Co. This black beauty comes from Gasoline Motor Company in Sydney, Australia. Built for a client in Melbourne, Gasoline sourced a pair of Honda Dominators from a farm in Albury Wodonga. That’s five and a half hours from Sydney—but by the looks of it, it was a worthwhile trip. 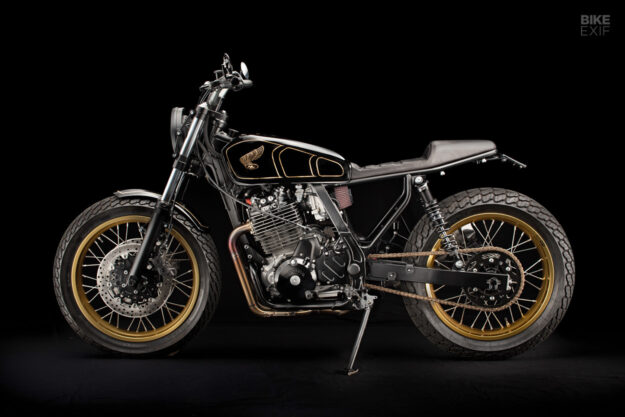 Using the best bits of both bikes to create a good starting point, the team got to work. Up front is a set of early model Yamaha R6 forks, bolted to the frame using special parts from Cognito Moto in the US. There are also new rims, spokes and a fancy twin brake disc kit.

The engine was treated to a full rebuild, complete with an oversized piston. Painted black with the fins and RFVC lettering skimmed for contrast, it looks brand new. 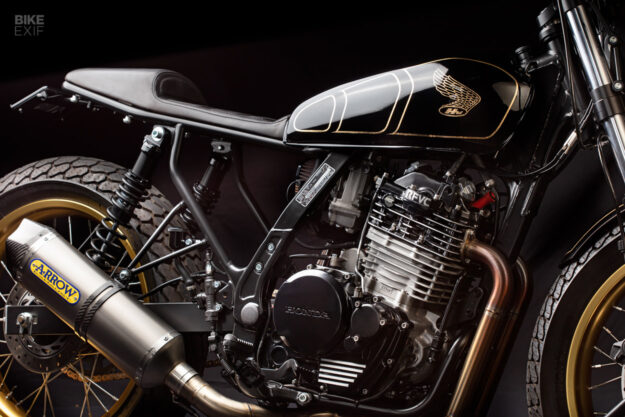 Boosting the 644 cc lump is a new flat-slide FCS carb with a DNA filter. All that hot air exits from a fresh stainless steel exhaust, complete with an Arrow muffler.

The electrics got a big upgrade as well. There are LEDs all around with the new headlight mounted on custom brackets. A Motogadget control unit takes care of all the thinking, with the bike completely rewired from scratch. Kellermann indicators and tail light are barely visible. 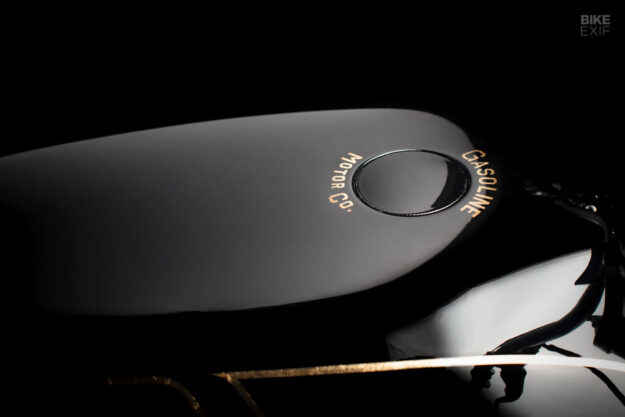 The tank was donated by a Honda CG125, and after the fuel cap was recessed, it was finished in black with a stunning gold flake stripe. There’s a new chocolate brown leather seat, sitting atop a custom subframe.

Fans of the old big red thumper will also notice that the mono-shock is gone; Gasoline replaced it with a more traditional twin shock setup. 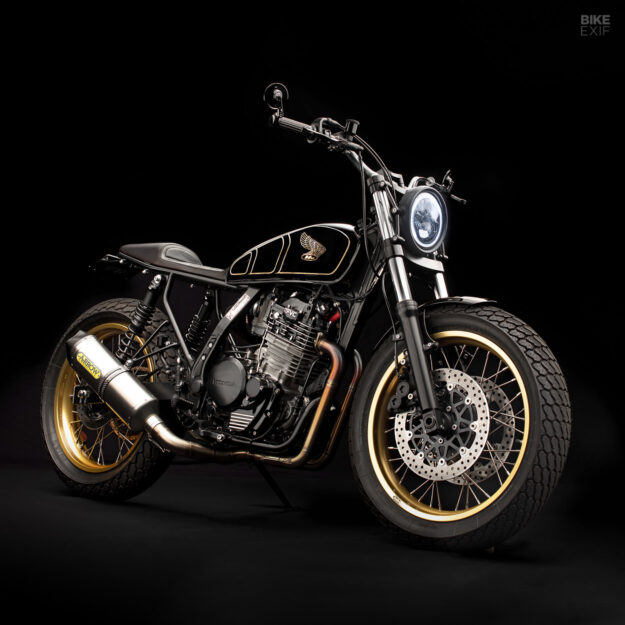 From farm hack to city scrambler, all of Gasoline’s hard work has paid off. It’s 1/5 on this week’s Speed Read roster, but it scores a 5/5 from me. [Gasoline Motor Co. | Images by Adrian Veale] 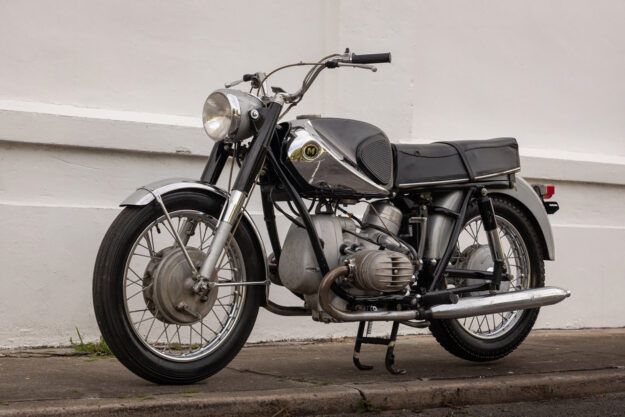 1965 Marusho ST 500 You’d be forgiven for thinking this is a vintage BMW, but take a closer look and you’ll see that this is not a German machine. This is a Marusho ST 500, built in 1965 in Hamamatsu, Japan.

After apprenticing to Soichiro Honda, Masashi Itō broke away from Honda and started the Marusho company. It was a relatively short-lived motorcycle manufacturer, starting in 1948 and closing in 1967. But they made a few models of note—like this horizontally-opposed, shaft drive, 500 cc touring bike. 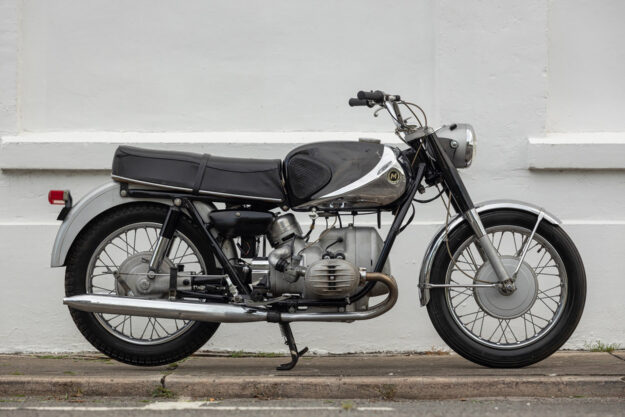 In what looks like part Honda Dream, part BMW R50, the Marusho 500 ST is certainly a handsome machine. The tall, wide handlebars and long seat make it perfect for big days on the road with the 500 cc flat twin purring along beneath you.

The engine does bear a striking resemblance to an old BMW boxer. There isn’t much information out there about these bikes, but I can only assume that the design was based on BMW’s for good reason. The beautiful peanut-shaped rocker covers are easily removed for valve adjustments, and, in fact, it appears that not a single piece of bodywork needs to be removed to service the bike. 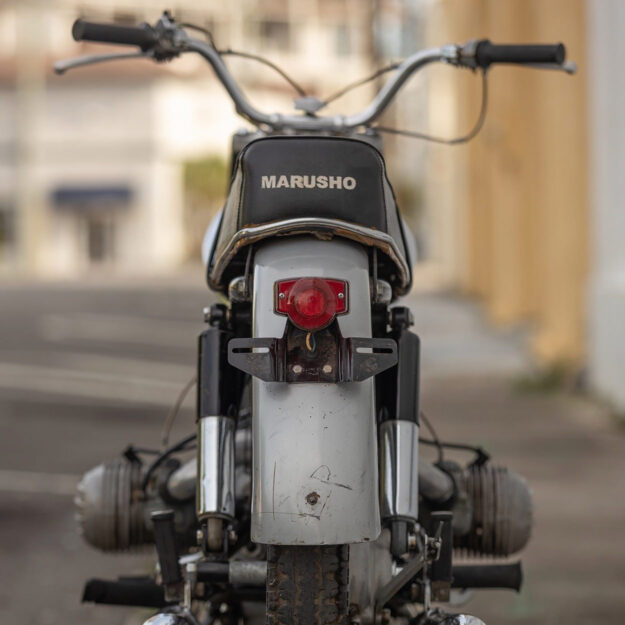 Burn Up Company Vintage Motorcycles in Florida is currently offering this original example for sale. Complete with the original key, toolbox and even exhaust, this would make a great addition to any classic garage or collection.

Please wait while I rush out and buy this. [More] 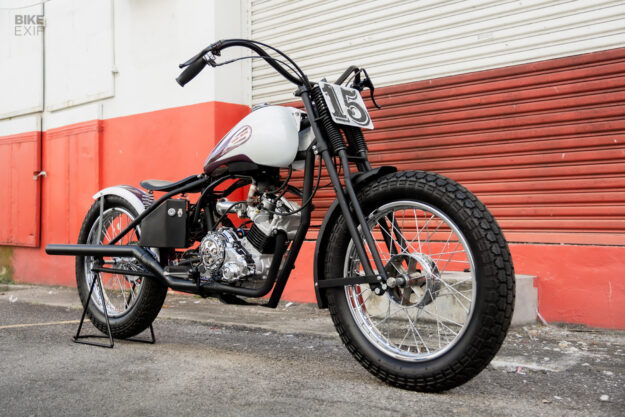 Yamaha Y15ZR by Nasir Morni The Yamaha Y15ZR doesn’t get a lot of attention in the West. However, elsewhere in the world, the ‘underbone’ class of motorcycles is huge. Not that the bike you’re looking at here resembles a factory Y15ZR in any way, shape or form.

This is a custom creation by Nasir Morni, from the Malaysian side of Borneo. Inspired by the stripped-down Harley-Davidson beach and board track racers of the early 1930s, Nasir made almost everything on this bobber by hand. 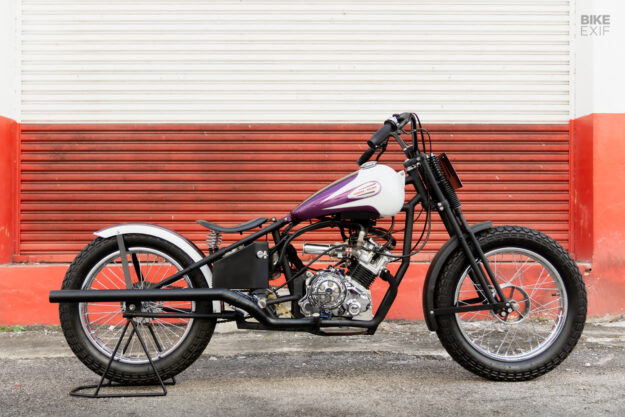 The frame is all-new, and is based on the classic Harley VL models. The tank was lifted from a Dyna and was originally one piece, but Nasir split it in twain and narrowed it down to look slimmer. The split tank serves two purposes: one half holds fuel, and the other houses the bike’s electronics.

Along with the split tank is another very unique feature: the brakes. Or, the lack of any visible brakes. So how does it stop? 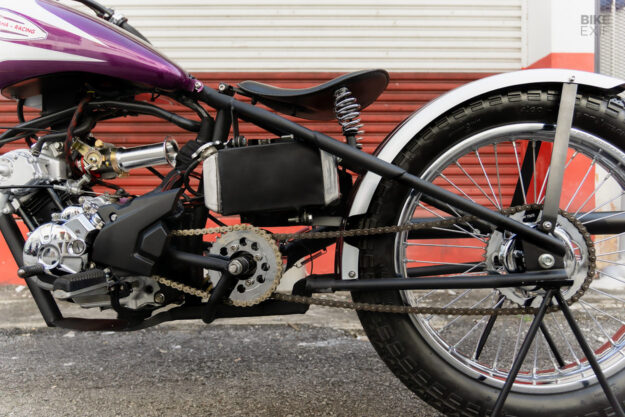 If you look closely on the left side, you will notice an extra sprocket behind the engine, linked to a very cleverly-designed braking system that Nasir made from a small drum brake hub. Inspired by Max Hazan’s KTM build from a few years ago, the brake shoes apply braking force to the drum, which is linked to the sprocket. As much as it messes with my mind, I love it—and Nasir reports that it works very well. 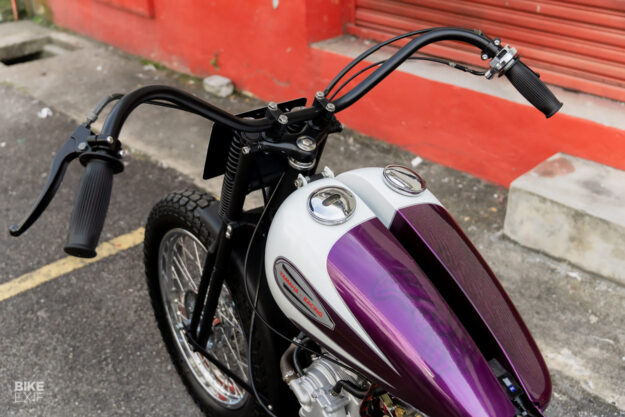 There are so many elements to take in it’s hard to touch on everything in so few words. Taking five months to build everything around the Y15ZR engine and radiator, the bike was displayed at Art of Speed 2022—Malaysia’s premier custom culture show.

Competing in the Invitational Bike Build Off category, Nasir and his team managed to score a prize. Can’t say it’s hard to see why. [Nasir Morni Instagram | Images by Amin H.] 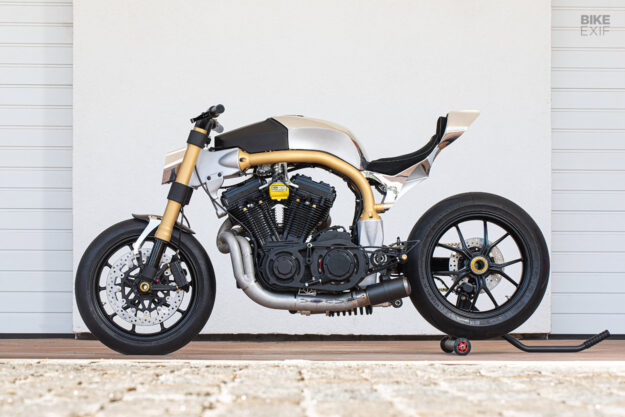 Buell ‘SR1’ by RD Kustom Sometimes you set out to complete a task only for things not to go according to plan. This 1200 cc Buell-powered CNC-machined masterpiece has a story like that. What started out as a father and son project turned into a one-of-a-kind machine, being awarded Best in Show at the 2022 AMD Championship in Italy last month.

Built by Michael Messina and his son Jimmy, this is the first build from France’s RD Kustom—the ‘SR1.’ The original plan was to take a Buell S1 engine and marry it to a Voxan frame. 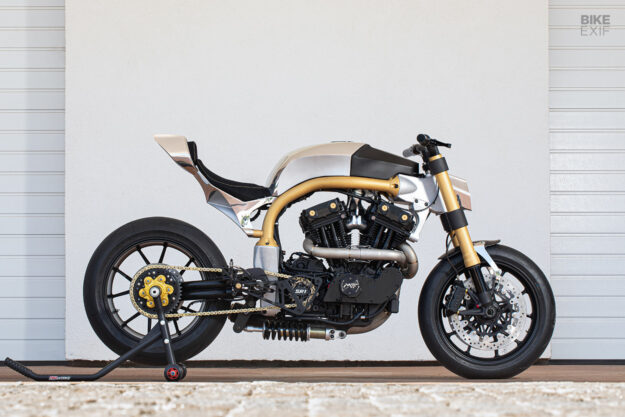 If Voxan isn’t familiar to you, they’re a French motorcycle manufacturer that was bought by the Monaco-based company Venturi in 2010. They only produce electric motorcycles now, but before the buyout they produced some rather interesting petrol-powered bikes. Notable features on Voxan motorcycles are their round section, twin-spar frame, and their V-twin engine that acts as a stressed member. 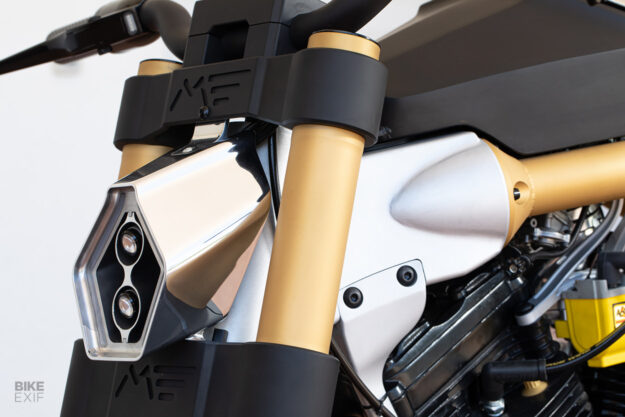 With all their similarities, replacing the Voxan motor with a Buell mill should be straightforward, right? It should have been, but after Jimmy was diagnosed with lung cancer, the whole plan got turned upside down. Jimmy is a mechanical engineer and an experienced racing mechanic, but due to his chemotherapy, he had to leave his job. So the weekend project became a life project.

Starting with just a 3D scan of the engine, Jimmy modeled the entire bike digitally in Solidworks. What he did next is nothing short of incredible—he CNC machined every part he needed out of aluminum, then assembled it like a Meccano set around the Voxan frame. 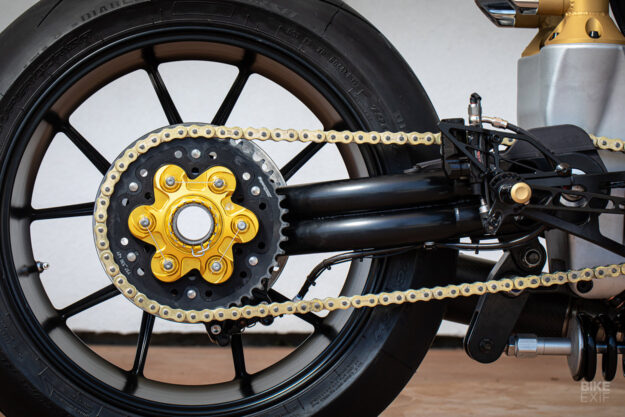 The front ‘block’ is where the front-end attaches, and houses the air inlet. The rear block serves as an oil tank, engine, swingarm and suspension mount. Everything, including the single-sided swingarm, triple clamps, frame tubes and the bodywork, was made from scratch.

If you like the look of this (and let’s be honest, who wouldn’t?), Michael and Jimmy have plans to do a small run of these bikes and live their own American Dream. Where do I sign up? [RD Kustom Facebook] 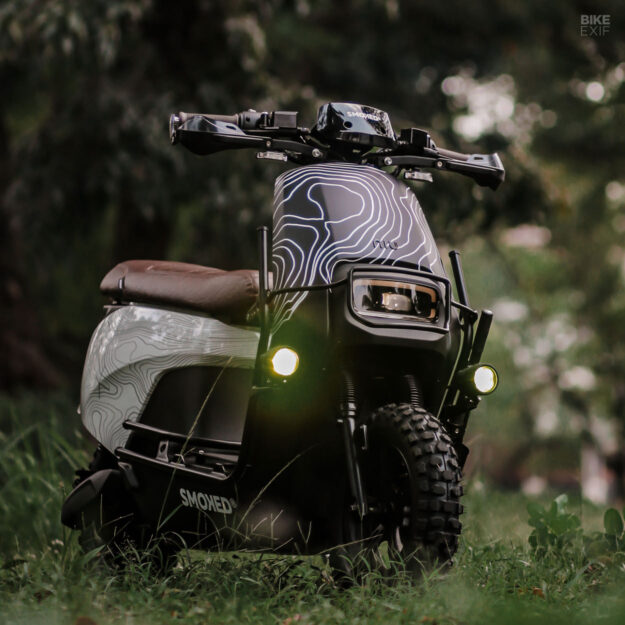 NIU Gova by Smoked Garage Electric motorcycles are taking off in a big way, but with prices where they are currently, I’m not likely to fork out my hard-earned just yet. Electric scooters soften the blow somewhat.

Significantly cheaper than full-fat electric motorcycles, e-scoots make a lot of sense. Even though the bodywork and design allow ample room for batteries and the electric motor, range anxiety shouldn’t be an issue. After all, if you’re looking at an electric scooter, it’s urban adventures you’ve got in mind. 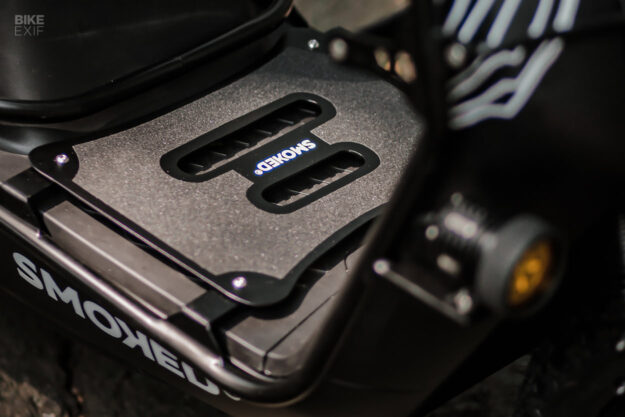 The team at Smoked Garage in Indonesia feel the same way about personal electric mobility, so they’ve teamed up with NIU to produce some rather slick scoots. NIU is a Chinese company, making slick-looking scooters that are also available in Europe and North America.

Based on the NIU Gova model, Smoked has come up with two designs: one for ripping around downtown, and one for continuing adventures once the pavement ends. 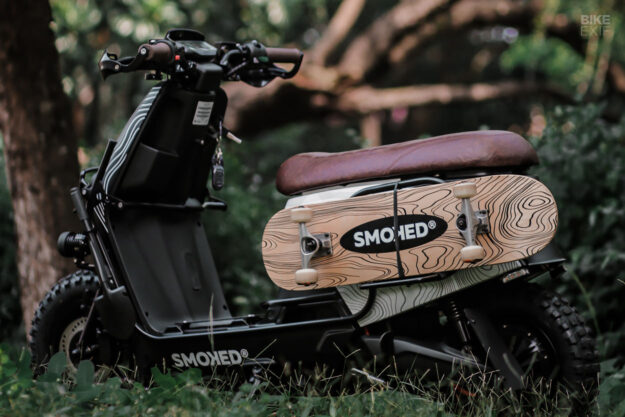 The Gova ‘Adventure’ model boasts new grips, hand guards, and crash bars to protect the bike (and your limbs) from stray foliage. There are powerful LED lights all round, including some very ADV-looking fog lights up the front.

There’s also a new paint job and a brown leather seat. Knobbly tires, a new footbed and a skateboard/surfboard rack round out the adventure package. 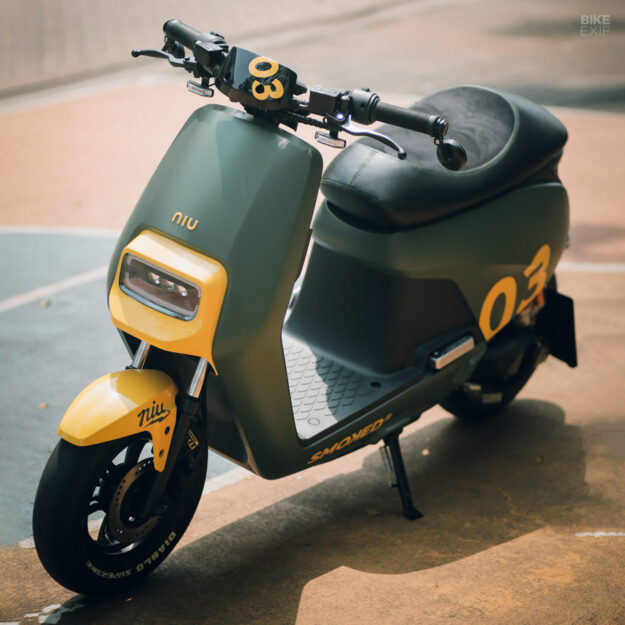 The Gova ‘C.Racer’ is a stripped-down, street-ready affair. The matte green paint with yellow accents is particularly nice, tying in with the new piggyback shock absorber in the back. It’s a tidier package than the Adventure model, with the only protrusions being the small, bar-end mirrors.

The seat is black and modeled in the café racer style we all know and love. I’m not sure if the Pirelli Diablo Superbike slicks are a meme, but I like the look of them nonetheless. 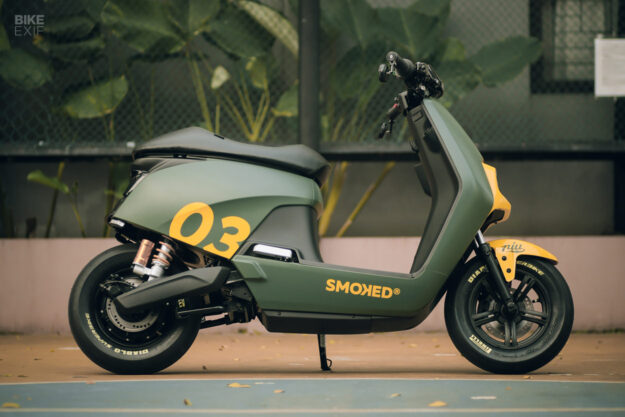 Limited to just 100 units each, if you can see yourself slipping silently through the streets (or forest) on one of these, give Smoked a shout. [Smoked Garage] 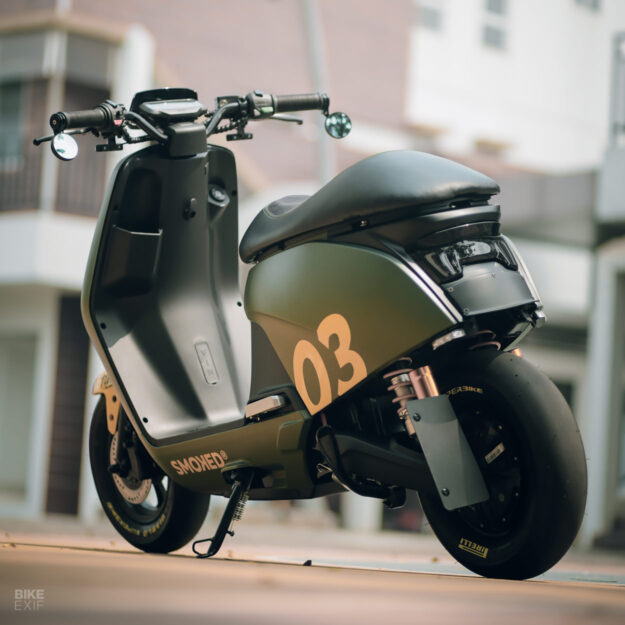