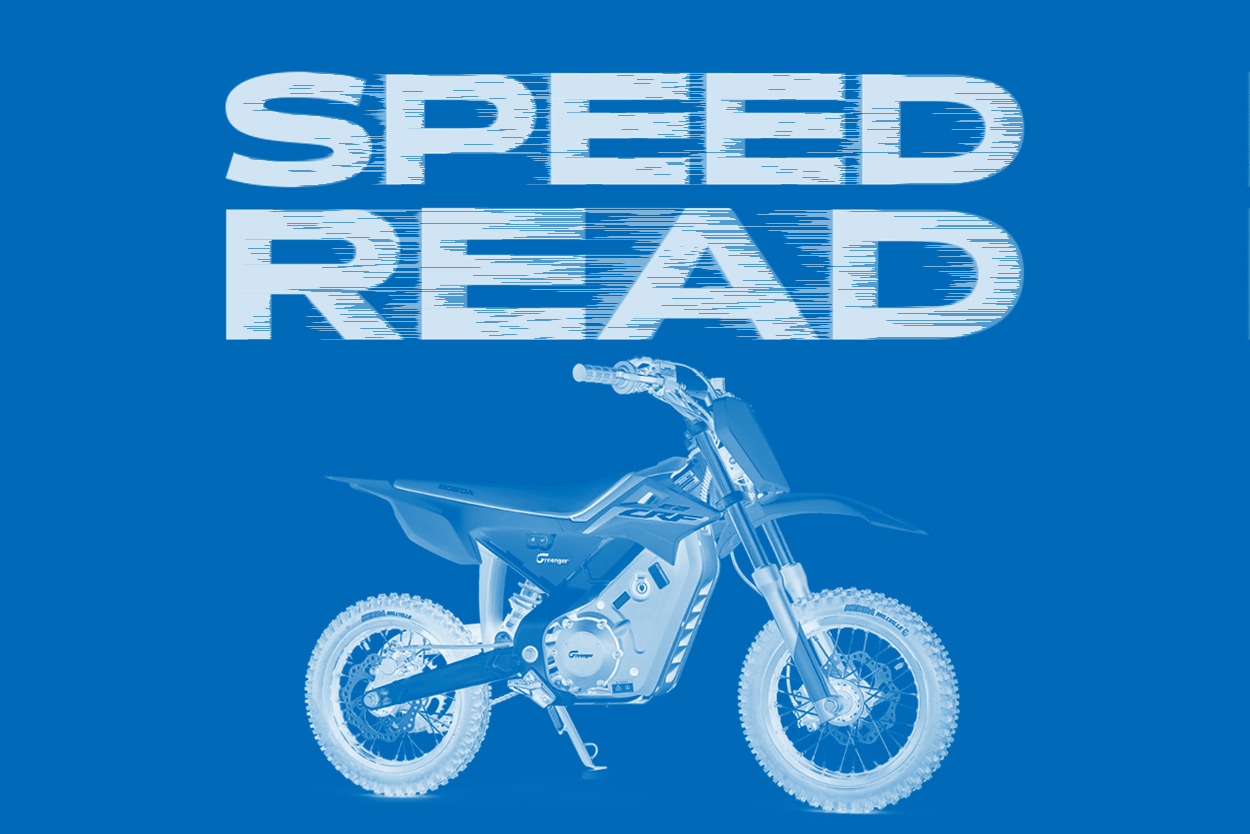 Honda goes electric—sort of—and Indian launches a limited edition FTR to celebrate its flat track successes. We also take a look at a Vincent-powered beauty from the French artisans at Godet Motorcycles, and have news of The Quail Motorcycle Gathering… 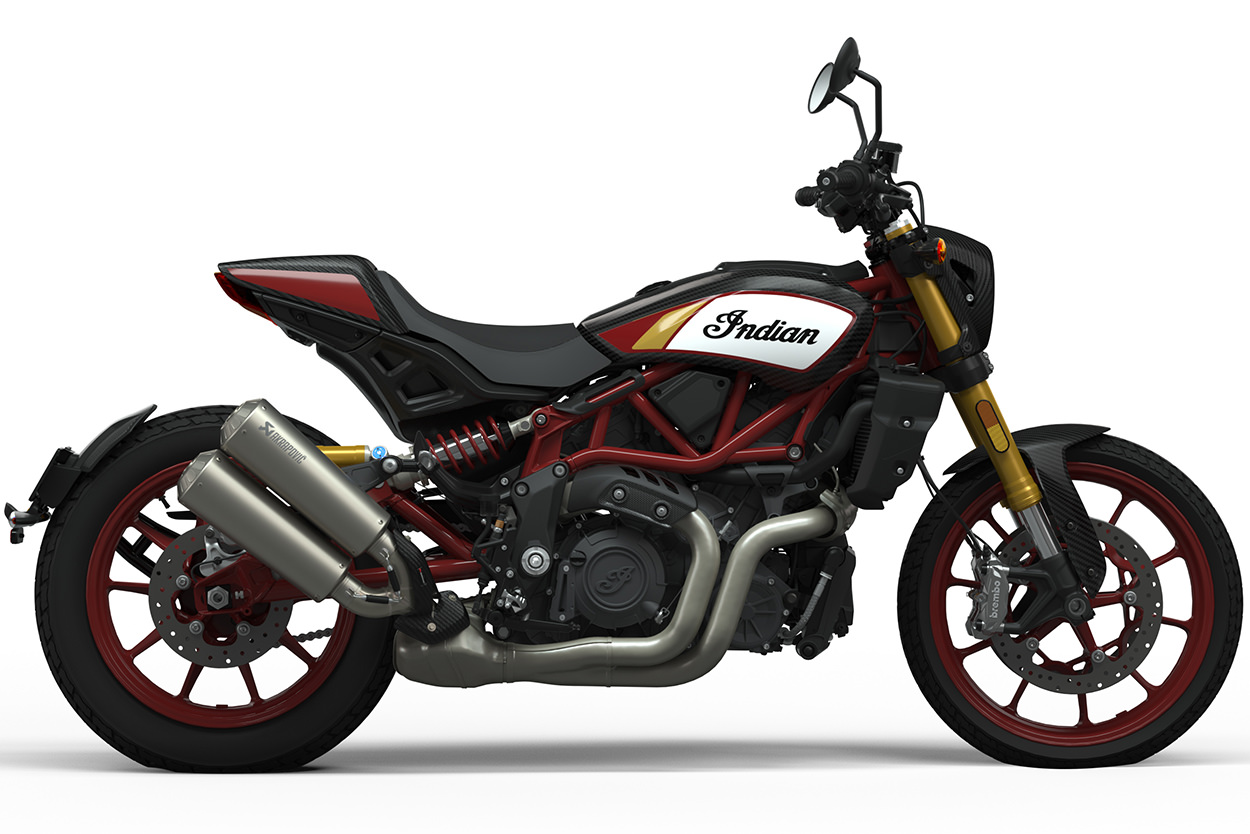 Indian FTR Championship Edition It’s not often you get the chance to compare dozens of motorcycles side-by-side. But a few weeks ago I was in one of New Zealand’s largest showrooms, with new models from several brands displayed alongside a dizzying array of secondhand machines. 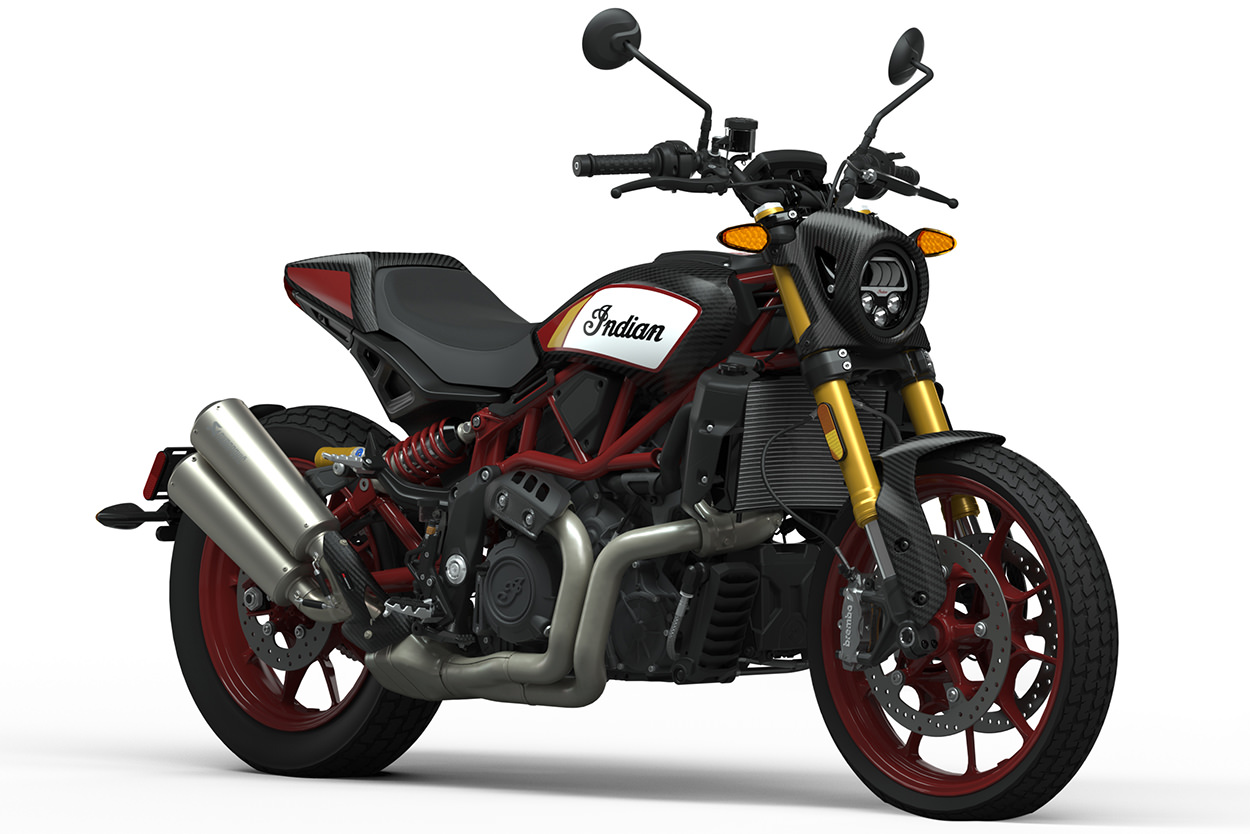 It was an illuminating exercise. Some of my preconceptions were confirmed, and many others were thoroughly debunked. But the machine I kept returning to was the Indian FTR 1200.

It just looked ‘right,’ with great stance and style, good paint and build quality, and none of the bloat that seems to afflict most American V-twins. 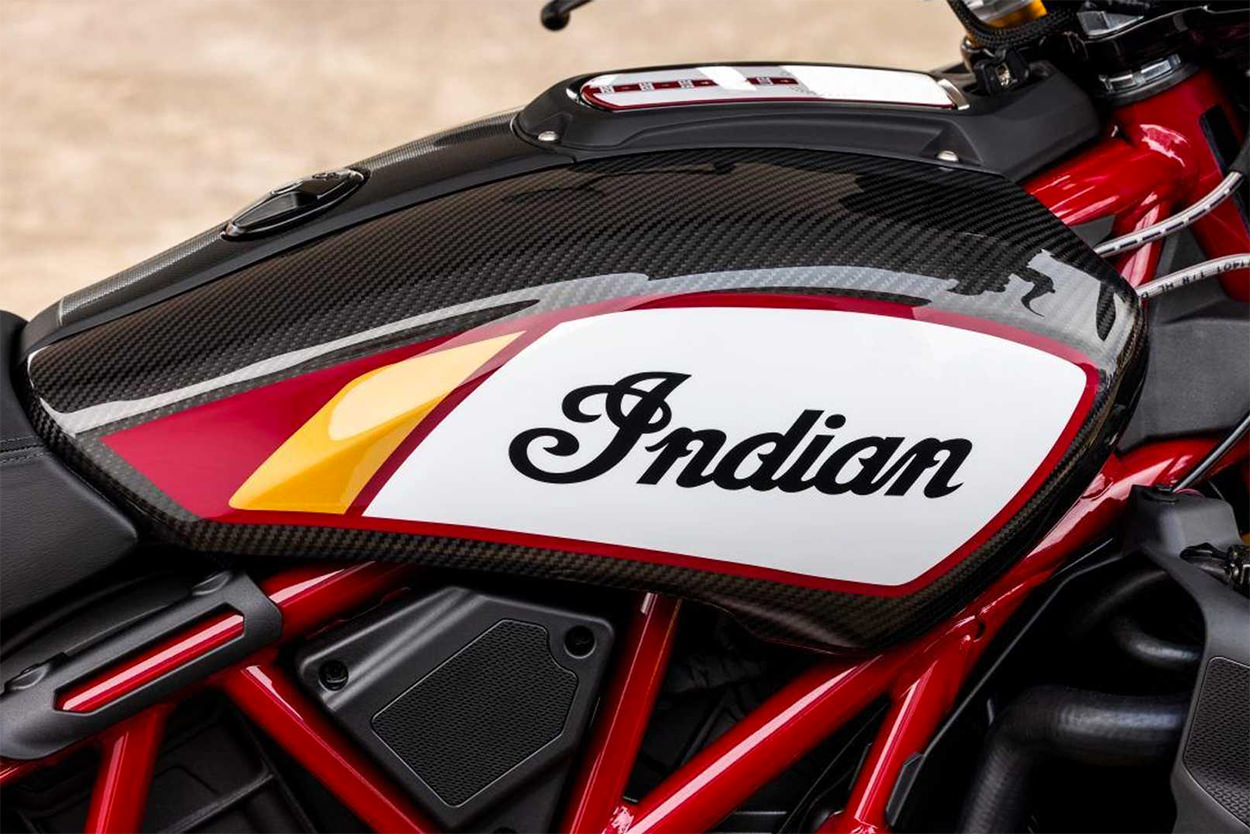 It’s now three years since the FTR 1200 was launched, so Indian has juiced things up with a new ‘Championship Edition.’ It’s a tribute to the all-conquering FTR750 flat track racer, and the cost is $16,499.

The mods go further than just a snazzy paint job, because the CE uses a mix of parts from the other four FTR models. The suspension is ZF Sachs, fully adjustable and with 150mm of travel front and rear. That’s the same as the FTR Rally model, and 30mm more than the Öhlins kit on the FTR Carbon. 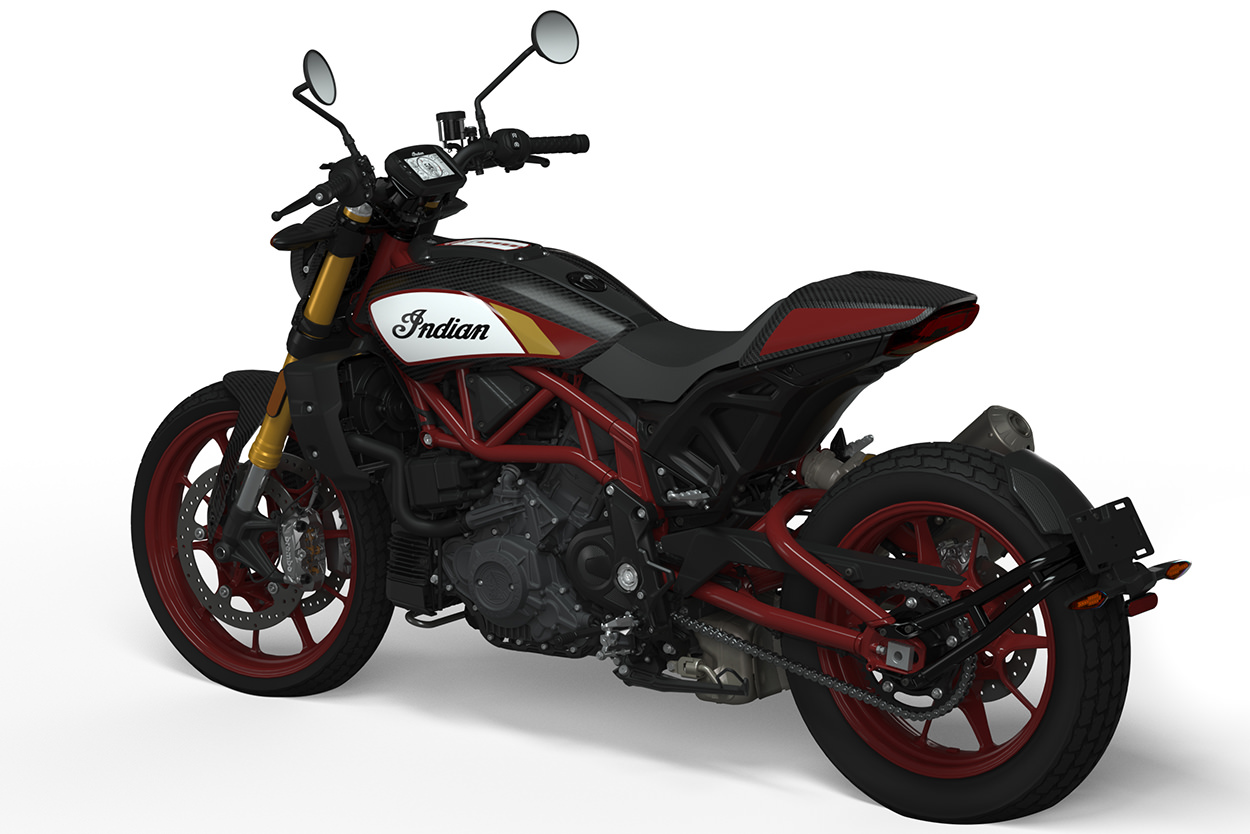 The Championship Edition also gets the touchscreen and electronics from the existing S and R Carbon models, red frame paint, and a bunch of carbon fiber parts—including the seat cowl, front fender, airbox covers and headlight nacelle.

The red cast wheels are F19/R18, as opposed to the standard 17-inch fitment for flat track, but the rubber is Dunlop’s DT3-R, which apes flat track tread patterns in a road legal format.

It’s all rather appealing, but you’ll need to be quick to secure this FTR. Just 400 will be made. [Indian Motorcycle] 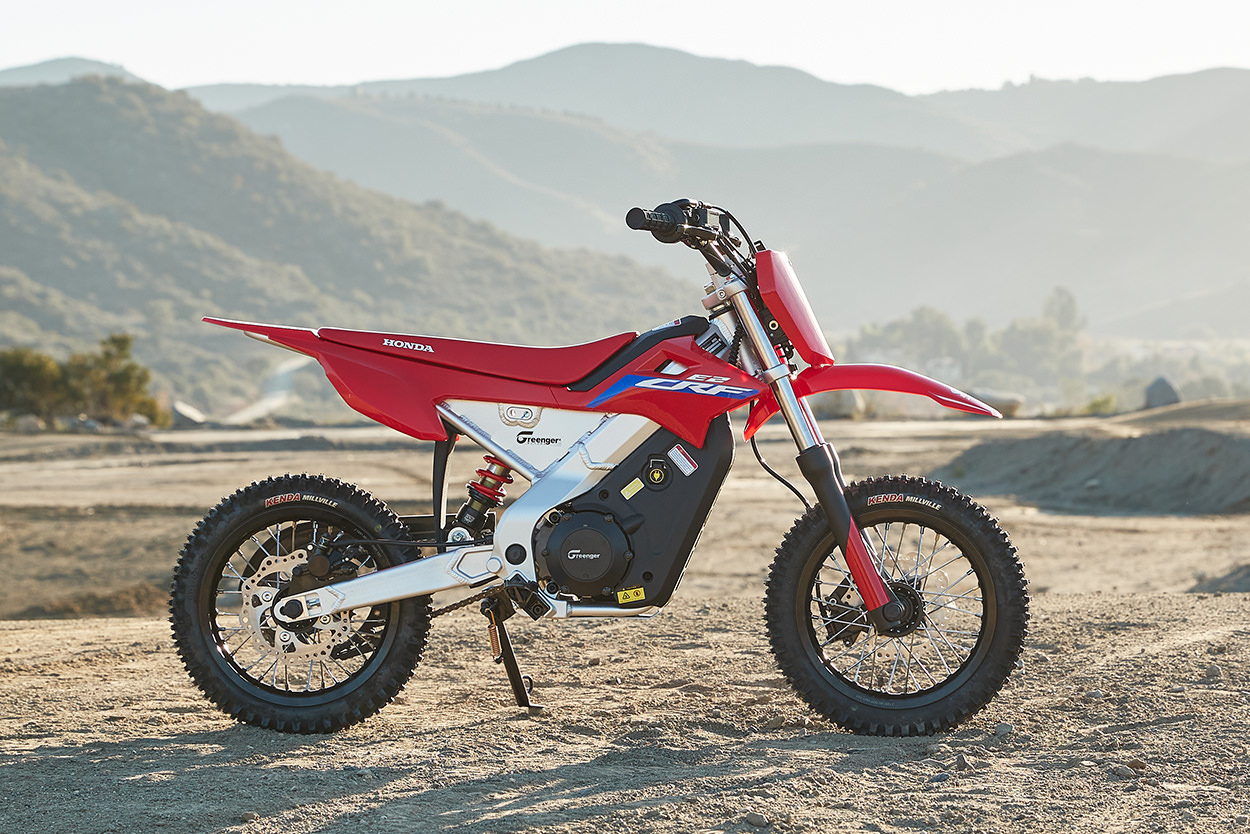 Greenger Powersports x Honda CRF-E2 The electric dirt bike market is niche, and shrinks even further on the youth end of the size scale. But if you have $2,950 to spare, you can now buy an electric CRF from American Honda.

The CRF-E2 is not technically a Honda production vehicle: it’s built by the SoCal EV specialist Greenger. But it has many of the hallmarks of a small-capacity off roader from Big Red, including an aluminum frame, decent suspension and quality disc brakes. 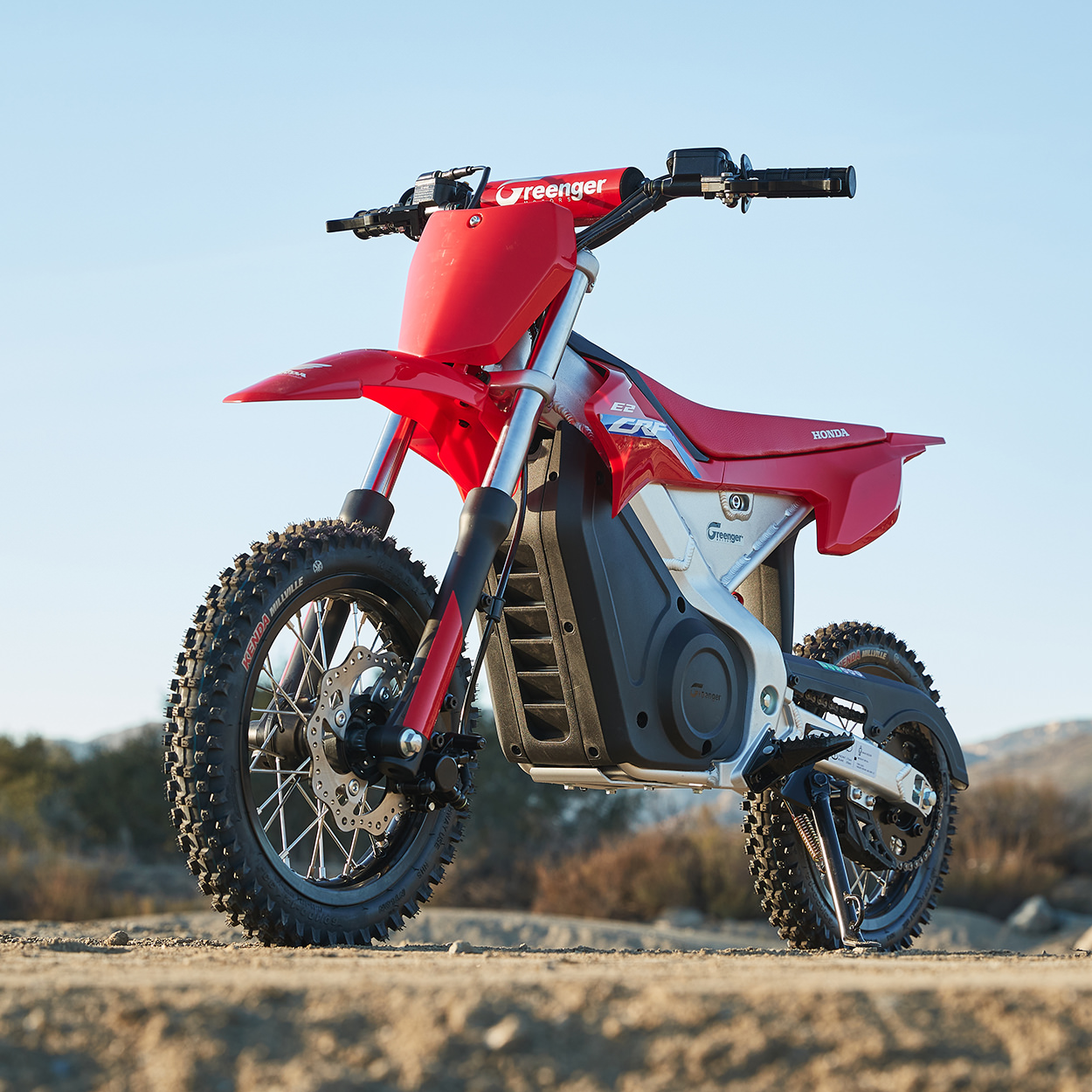 The CRF-E2 is an alternative to 50cc mini bikes, but can handle riders weighing up to 99 pounds—which is probably the average 13-year-old boy in the US.

The (adjustable) seat height is about four inches higher than a CRF50 though, at around 25 inches. Fortunately the CRF-E2 weighs a fraction less, at 48kg (106lb). 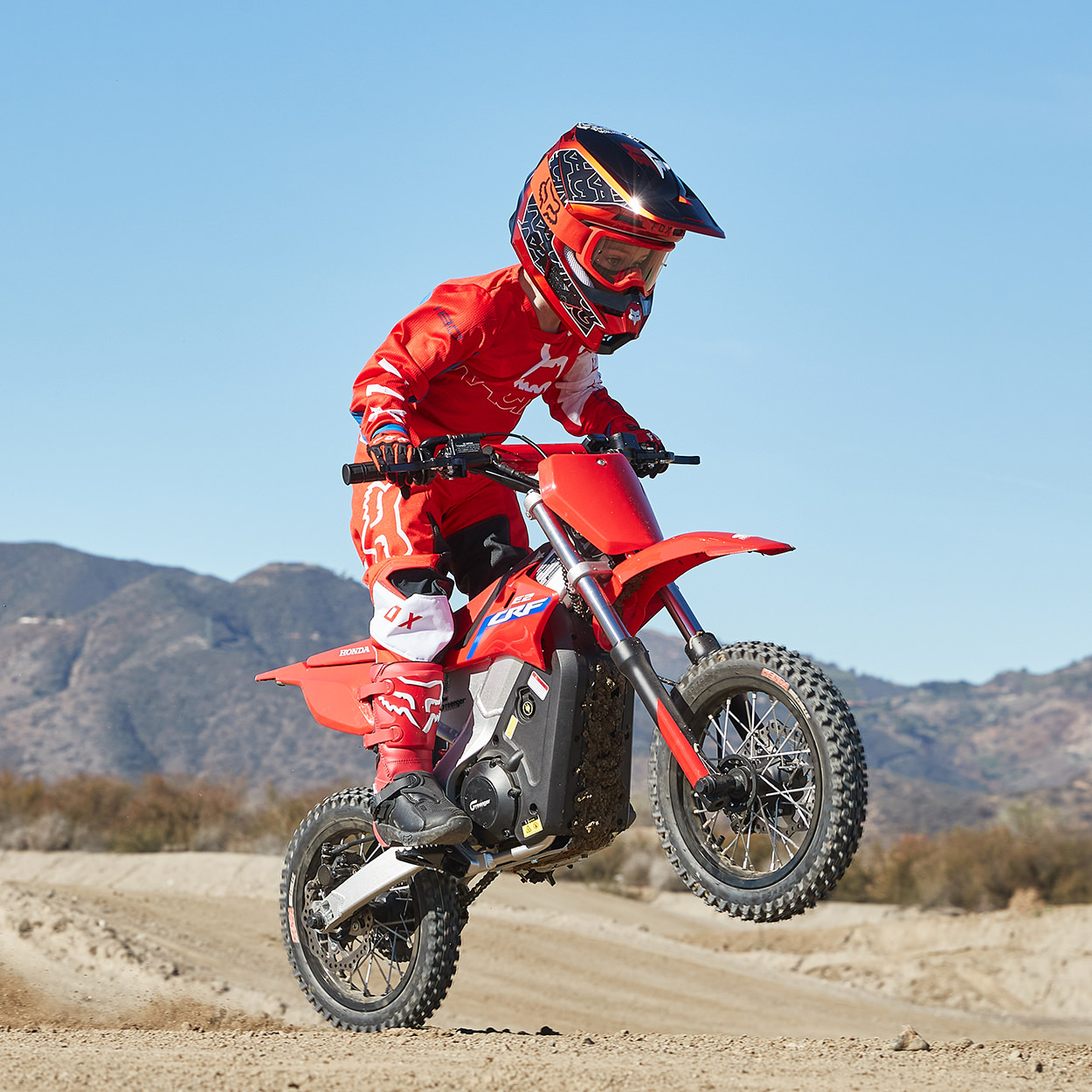 Run time is listed as two hours, which is probably optimistic for aggressive riders or hilly terrain. But if you stump up the cash for an optional extra battery, you can quickly swap that in to extend the fun. 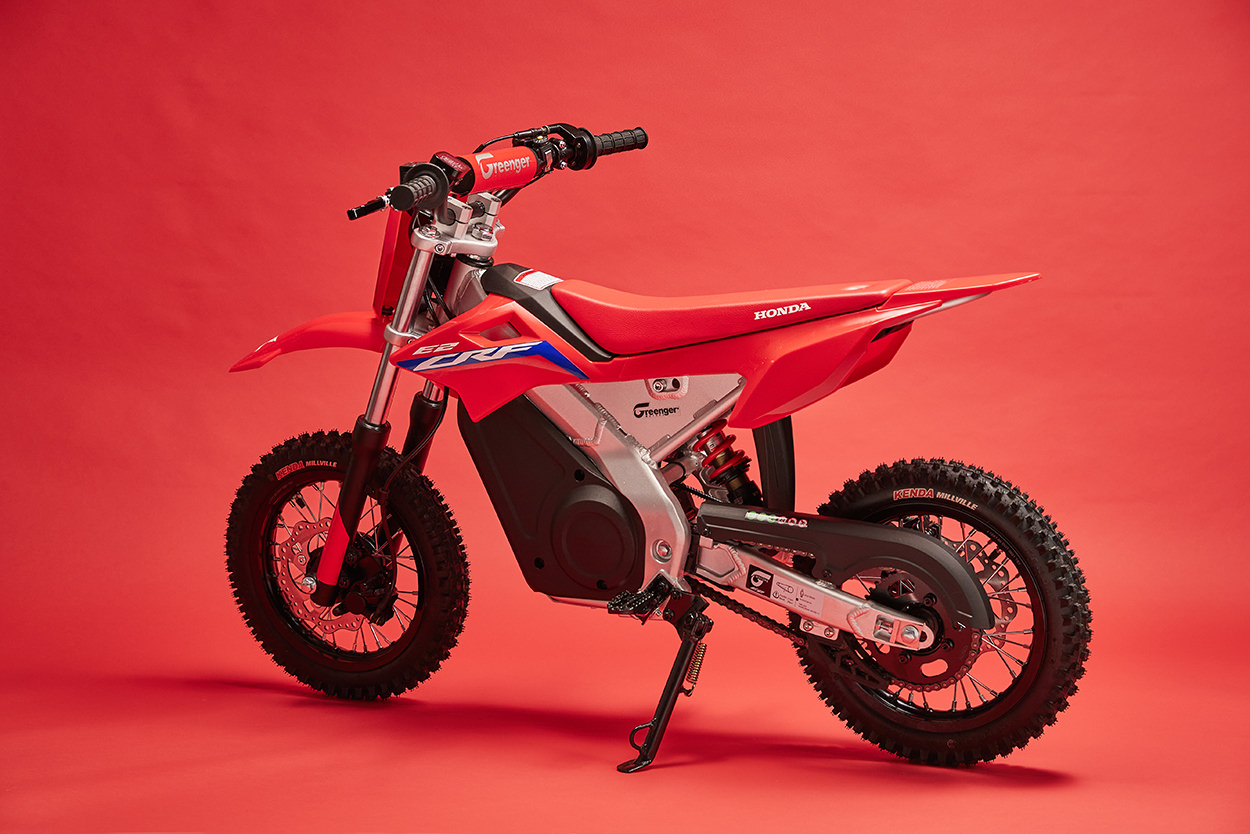 Anyone who has owned a conventional petrol-powered dirt bike will know that engine maintenance can be time consuming, especially for two-strokes. So this could be a breakthrough product for the kids’ market. And there’s little noise, even less smell, and no gearshifting.

You can bet the other Japanese manufacturers will be watching this development with interest. [American Honda Powersports] 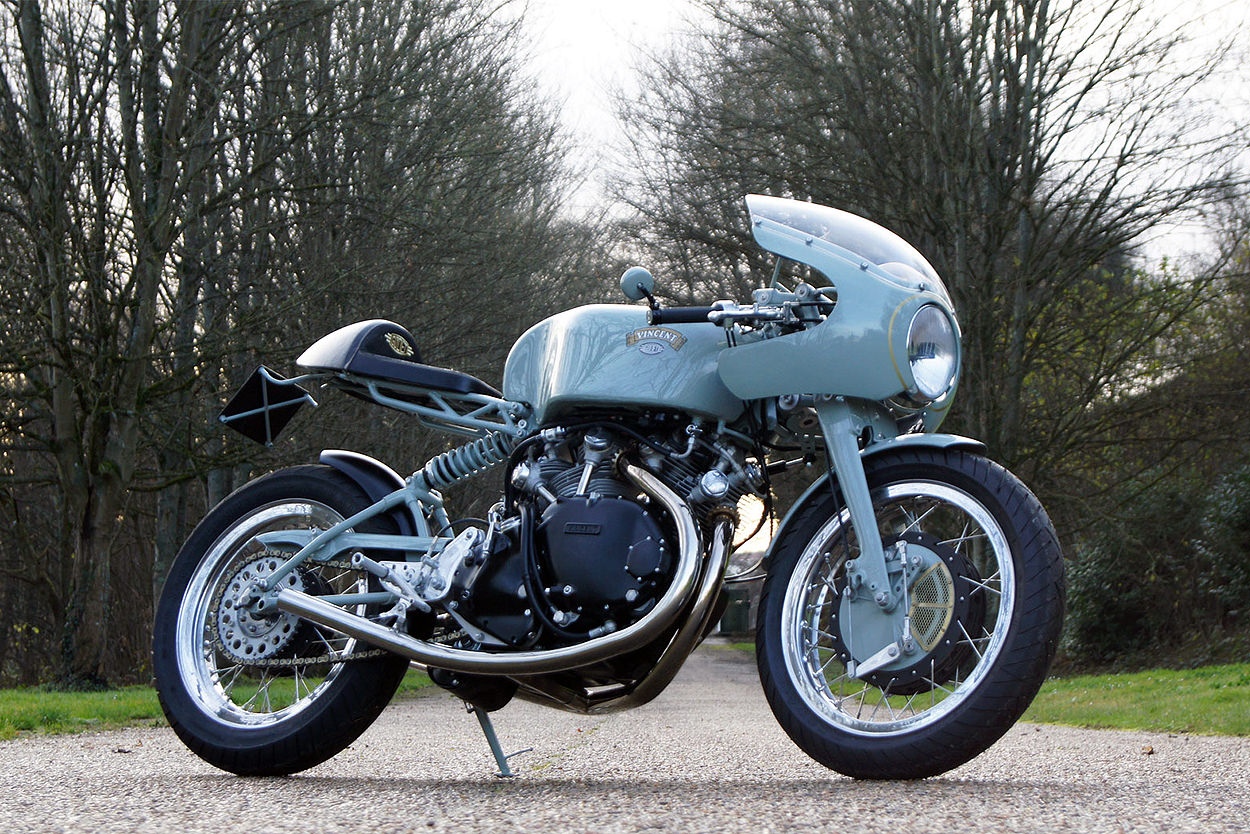 Godet Motorcycles Grey Lightning If you’re lucky enough to own a Vincent motorcycle, or are acquainted with the history of the brand, you’ll know of Godet Motorcycles. The French workshop is one of the world’s leading Vincent specialists and can repair, restore or even recreate virtually any Vincent. 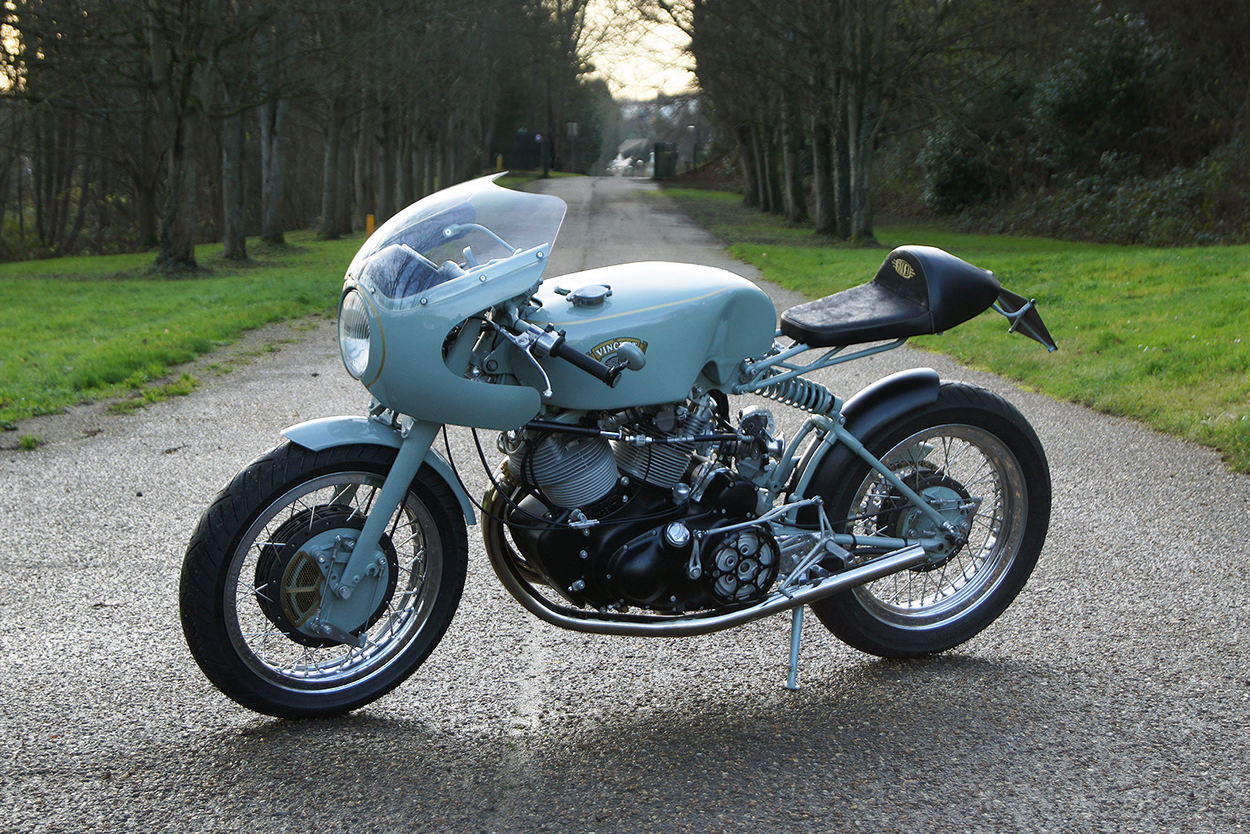 Godet also have permission from Fritz Egli to reproduce his famous Vincent chassis, but for this ‘Grey Lightning’ build, they created their own chassis based on another Vincent design.

This project has been planned for a long time, and is loosely based on the ‘Grey Flash’ classic race bike. 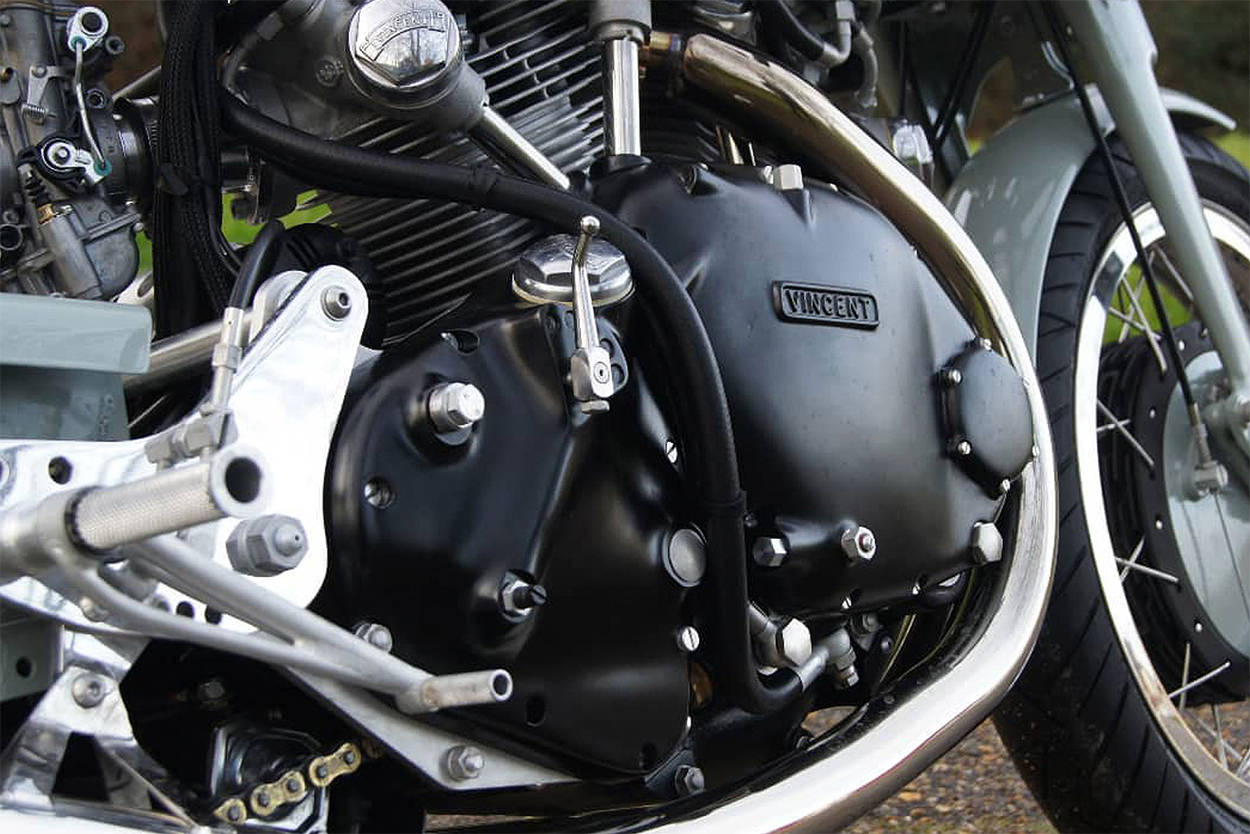 According to shop foreman François Guerin, “Our dream for some years has been to put a twin engine into our Grey Flash. So we had a lot of discussions with the customer and finally, he let us do what we wanted.”

The ‘twin engine’ is Godet’s own 1330cc Vincent-inspired v-twin, which has around double the 70 horsepower of the original 998 cc Black Lightning—helped by Mikuni TMR 40mm carbs and a stunning stainless steel exhaust system. 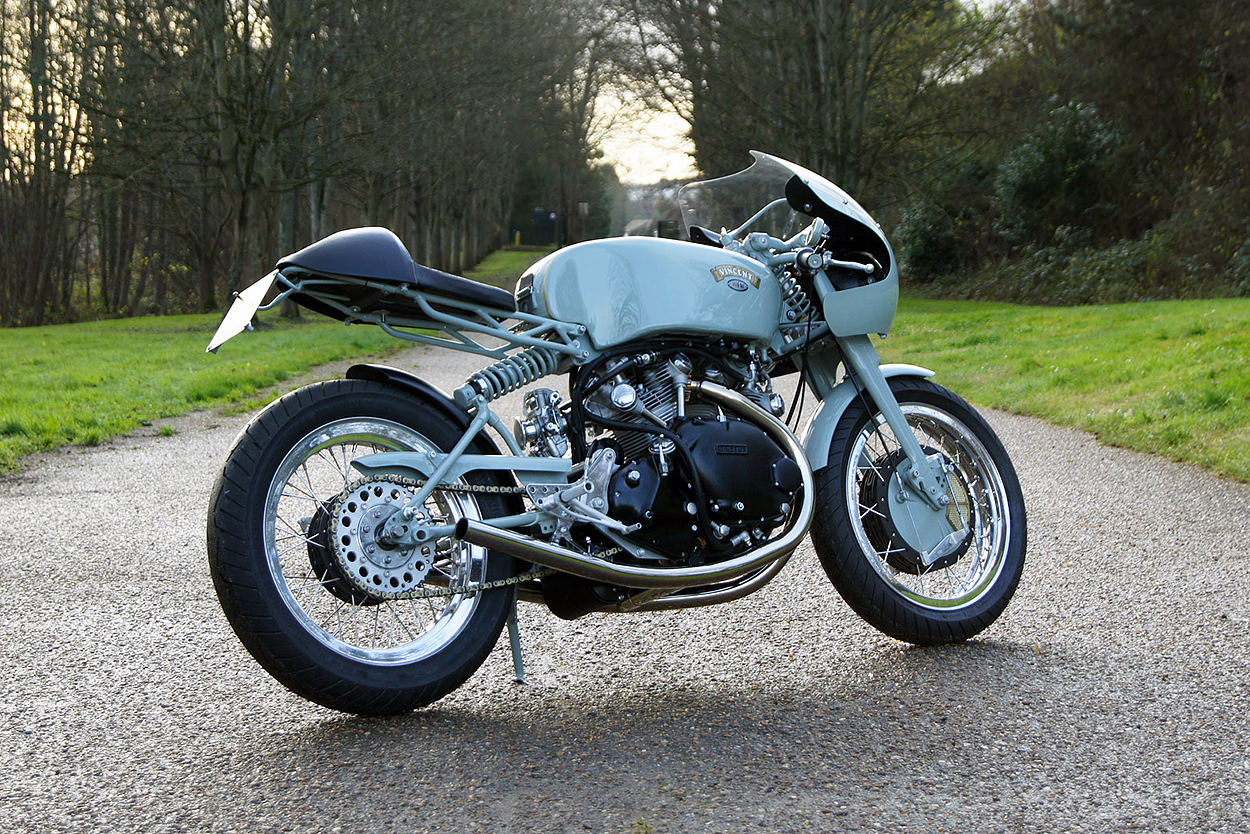 The chassis is optimized for handling and riding comfort, and the front end features Vincent ‘girdraulic’ forks—with updated geometry, modern dampening and Godet’s own brake system. Godet also fabricated the bars and hand controls, footpegs, the fuel tank and saddle.

The grey-blue paint is not a color you often see these days, but looks sublime—and matches the Godet race bike. A jaw-dropping example of timeless style and clever updates. [Via] 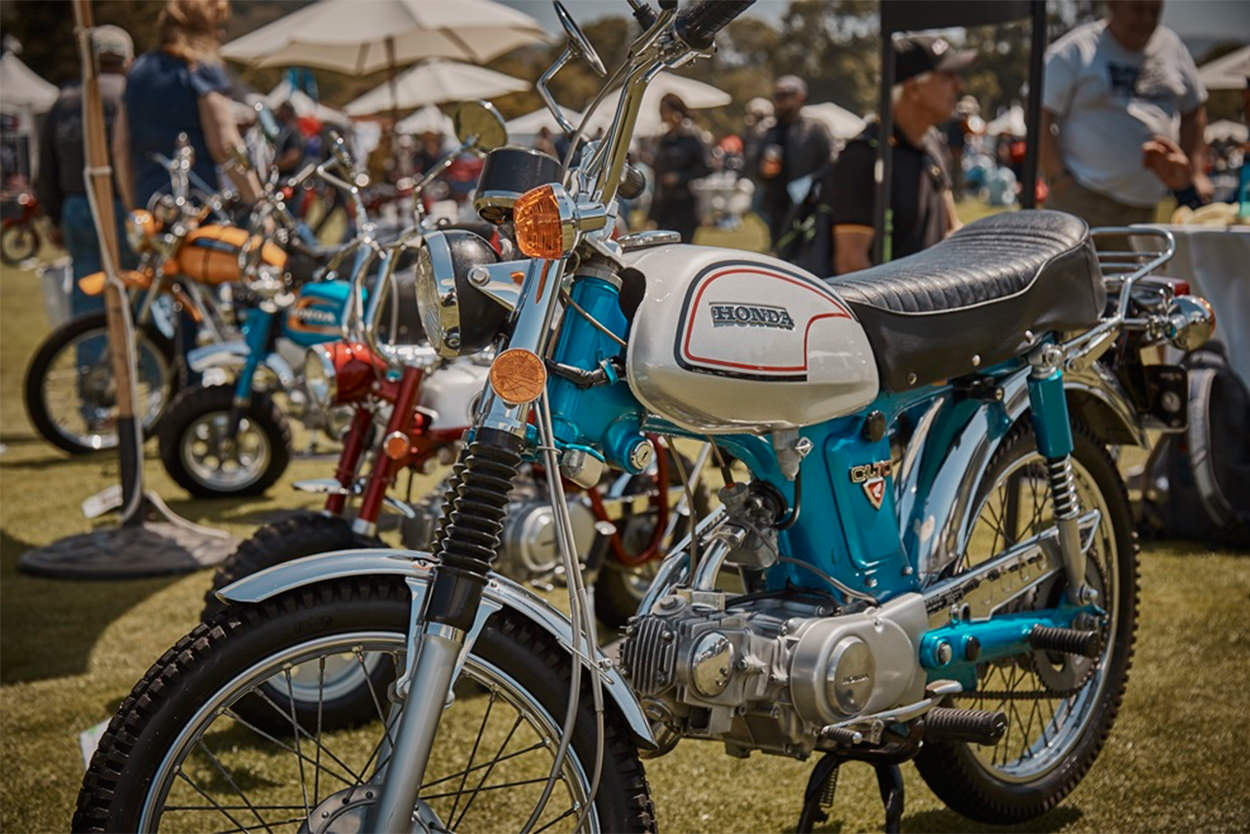 The Quail Motorcycle Gathering is back After cancellations in 2020 and 2021, The Quail is scheduled to return to the lush green lawns of the Quail Lodge in Carmel, California. The date is Saturday, May 14, 2022 and more than 350 vintage and modern motorcycles, scooters and bicycles will be on display. 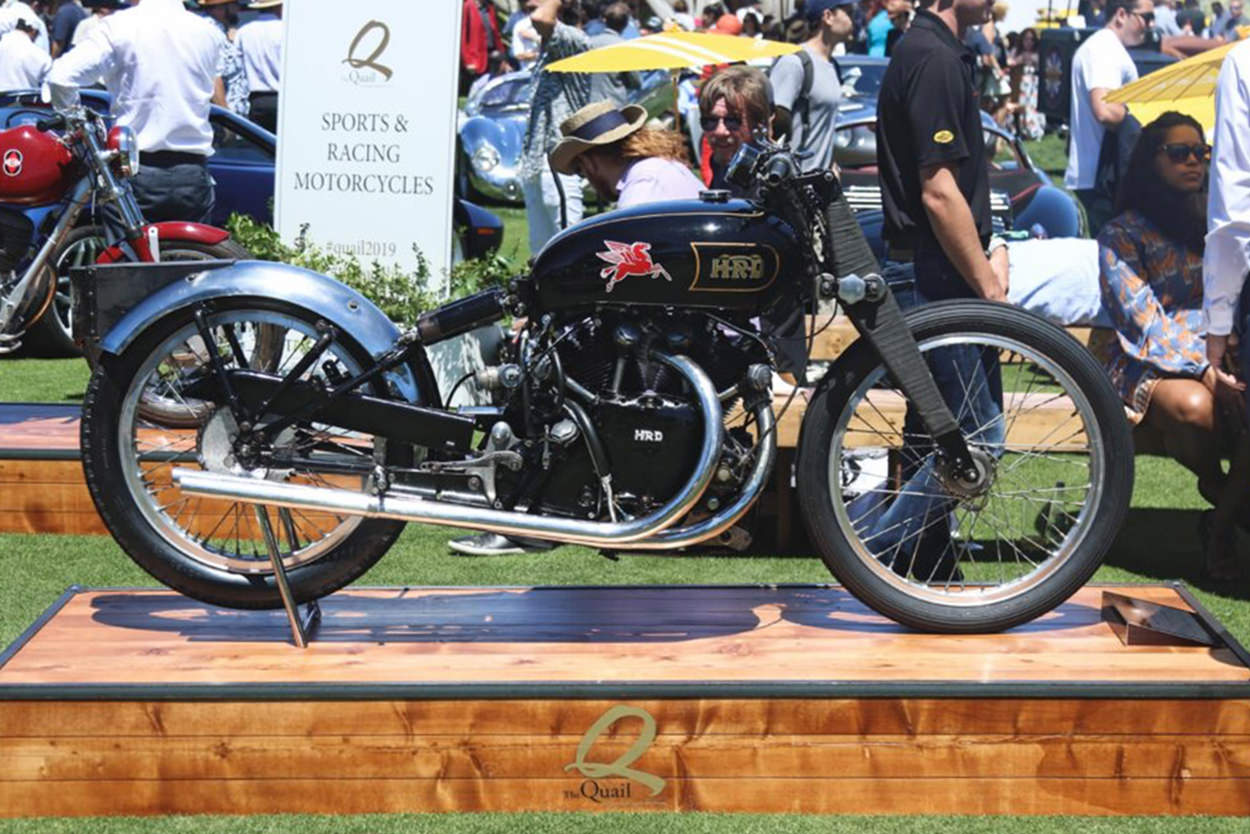 As well as the usual broad range of categories, this year’s featured classes include the Harley-Davidson XR-750, two-strokes, mini bikes and the BMW /5 series.

The MC will be long-time friend of Bike EXIF and founder of The Vintagent website, Paul d’Orléans. Roland Sands will be there too, since he’s been nonimated as the Quail’s 2022 Legend of the Sport. 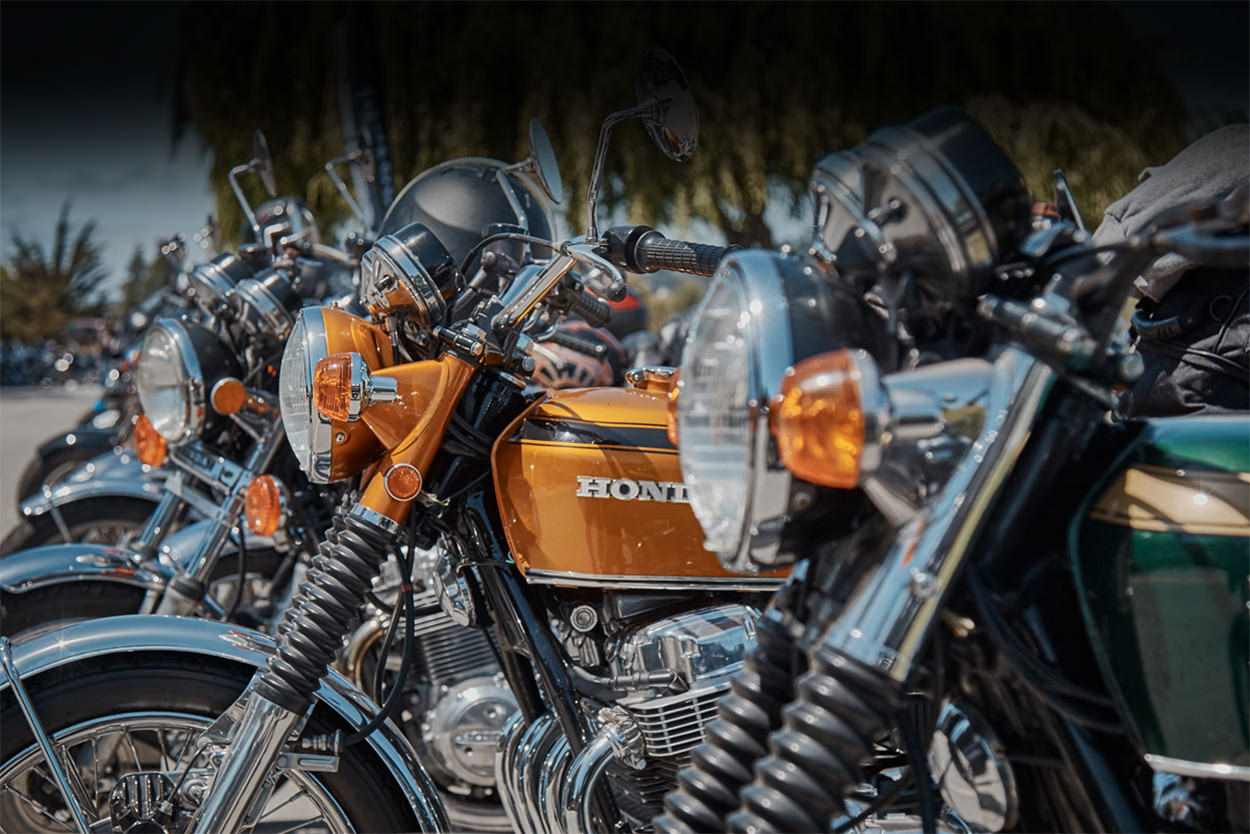 It’s always a brilliant show, on a par with the best automotive concours events. Tickets for the day start at $55, which includes parking if you’re riding a motorcycle to the event.

A selection of food trucks will be providing nourishment and beverages, but you can also plump for a $90 Admission + Hospitality ticket that includes a buffet lunch in a private seating area.

If you’re within riding distance of California, get your tickets here. And if you’re not, the next best thing is this video recap of the 2019 show. Enjoy.