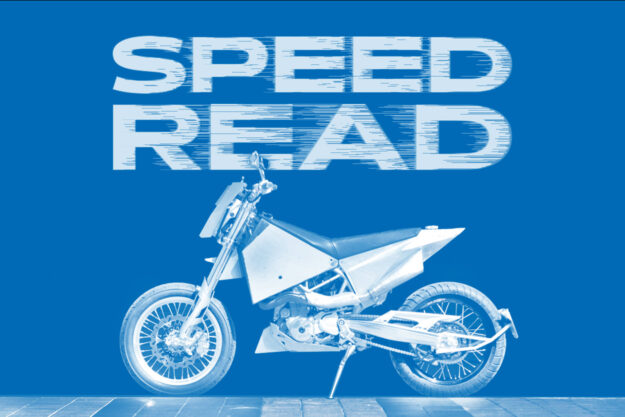 For your eyes only: a KTM 690 with all-aluminum bodywork, a humble Daelim commuter turned beach racer, a Ducati 1098S café racer, and a special James Bond edition Triumph Speed Triple RR. We also say goodbye to one of motorcycling’s greatest racers, Phil Read, who sadly passed away this week. 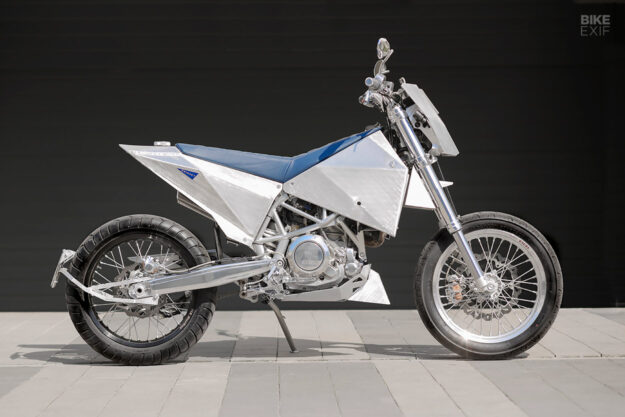 Amazingly, this build started out as a 2012-model KTM 690 Enduro R—what some describe as a unicorn among adventure bikes. 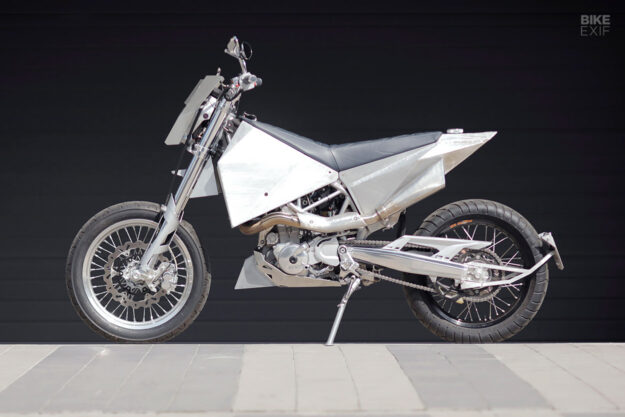 It’s lightweight, produces gobs of power and can be loaded up for multi-day trips away from home. It also has a six-speed transmission that’s geared for highway speeds, good suspension and a 3.43 gallon fuel tank.

But what Unikat wanted from the KTM was an urban assault vehicle that eats corners for breakfast, lunch and dinner. 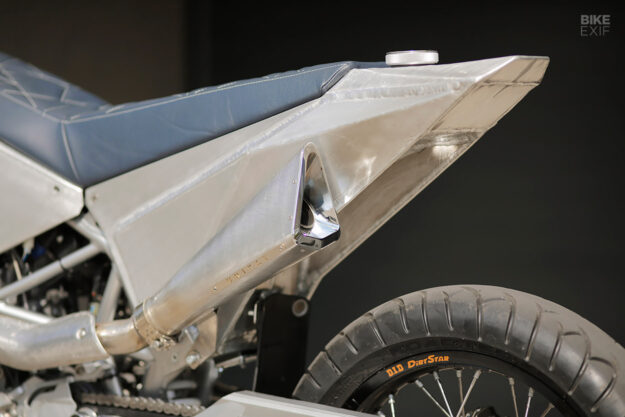 The 690 is one of the few motorcycles to feature a rear-mounted fuel tank from the factory. So Unikat put a large amount of time and effort into this aspect of the build. It had to be sturdy (because it’s also the subframe), look good and function flawlessly.

A new fuel tank was hand-shaped from aviation-grade aluminum and fitted to the frame. Then the rest of the body panels, and the headlight nacelle, were shaped from aluminum to match. 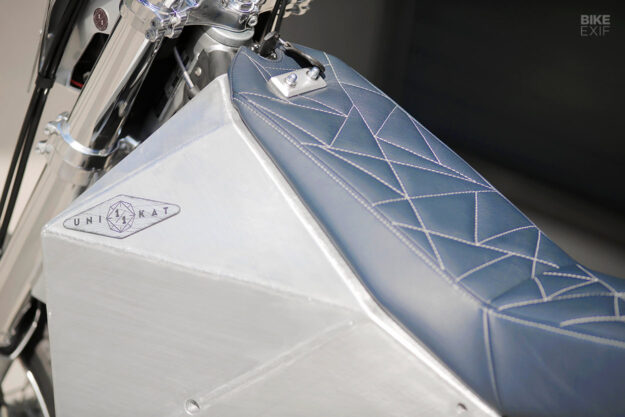 Once finished, the aluminum bodywork was brushed by hand and clear-coated. A modified skid plate and tiny front fender were added, while the engine, swingarm and other metal parts were polished or brushed.

The custom leather seat is long, providing plenty of comfort and room to move—and it’s generously padded, perfect for long days in the saddle, cutting up canyon roads. 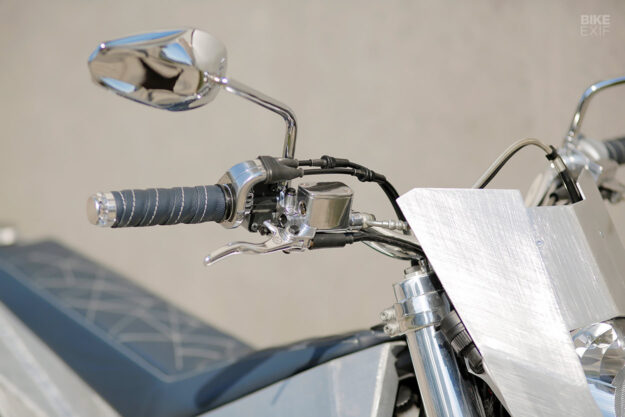 The front wheel was re-laced to an 18” Excel rim, and street tires were spooned onto both wheels. Unikat installed a K&N racing filter too, and an Ixil muffler that complements the bodywork flawlessly.

Shiny enough to start fires, it’s just as well this doesn’t spend much time in the forest anymore. From an off-road weapon to a one-of-a-kind street tracker, we bet the KTM’s new owner is very happy indeed. [Unikat Motorworks] 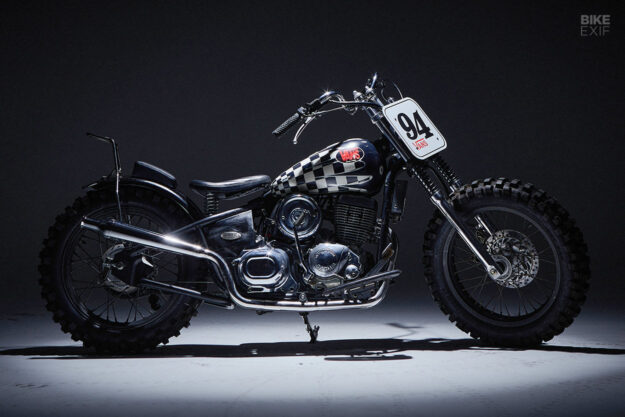 Daelim Daystar by Garage94 Based in Seoul, South Korea, Garage94 recently teamed up with Vans Korea to create a series of custom bikes, inspired by the sneaker giant’s most iconic shoes. Based on Vans’ tagline, ‘Classic Since Forever,’ Garage94 built five different motorcycles in five different styles. 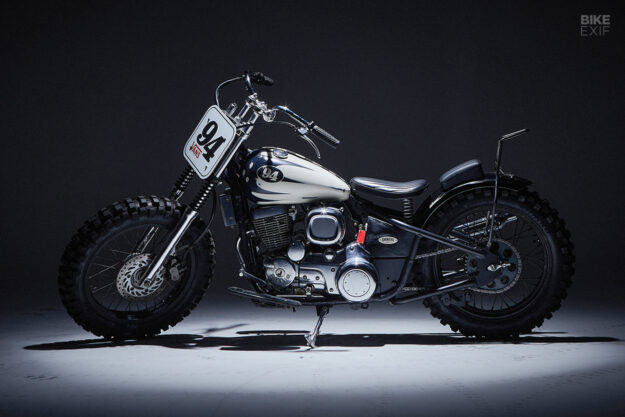 This tiny cruiser was the second build in the series, and it’s based on the humble Daelim Daystar 125. In stock form, the Daystar is a small-capacity commuter bike with some stylish cruiser aspects. The 4-stroke single is popular in Korea, which is one of the reasons it was chosen for this build.

Garage94’s Smith Kim made some impressive changes to the Daelim. The inspiration was Harley-Davidson’s venerable WL Flathead race bikes from the 30s and 40s, and it shines through. 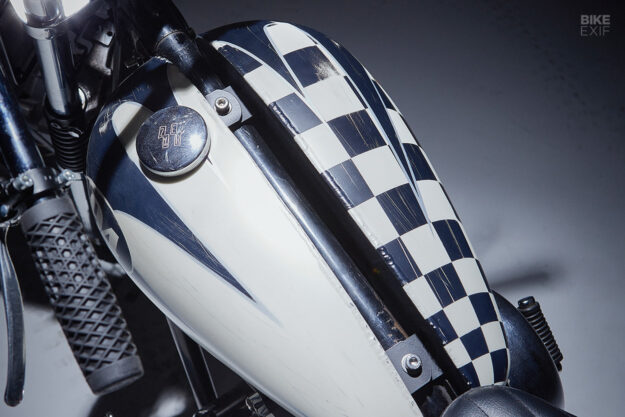 Custom-made split tanks sport the iconic Vans checkerboard pattern on one side, with a scalloped design on the other. The frame has been converted to a hardtail, with the rear mudguard topped with a pillion pad to match the custom solo seat. A conservative sissy bar completes the back end. 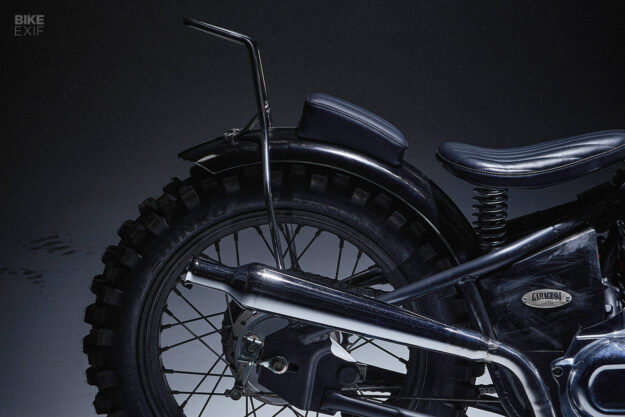 Grips sporting Vans’ classic ‘waffle’ tread pattern are a perfect touch, as is the tight exhaust header and tulip-style muffler. The Daystar also wears chunky tires and a front number plate, because Garage94 runs the largest vintage dirt event in Korea. It’s called the Camel Race, and this bike is set to take part.

From a bland commuter to a stunning, vintage-inspired dirt dragger. We love it. [Smith Kim of Garage94] 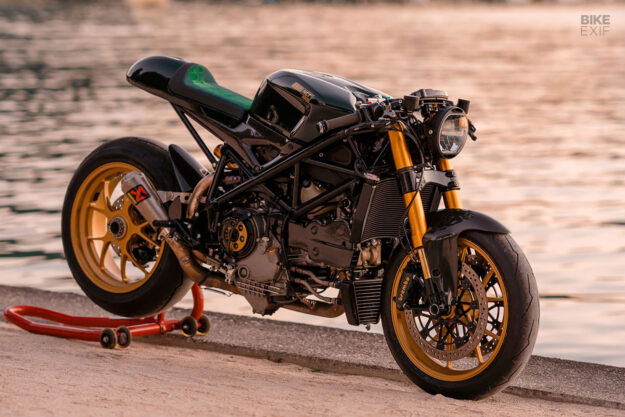 Ducati ‘Evo Racer’ by NCT Motorcycles David Widmann and his Austrian-based outfit, NCT Motorcycles, have just pulled the covers off their first limited series bike. Called the NCT Evo Racer, the series is based on the Ducati 848, 1098 and 1198 made from 2007 to 2011.

Inspired by the café racers of the 1950s, but still retaining the stunningly modern Ducati running gear, the series took over two years to develop. The test bed, the bike you see here, is a 2009 Ducati 1098S. 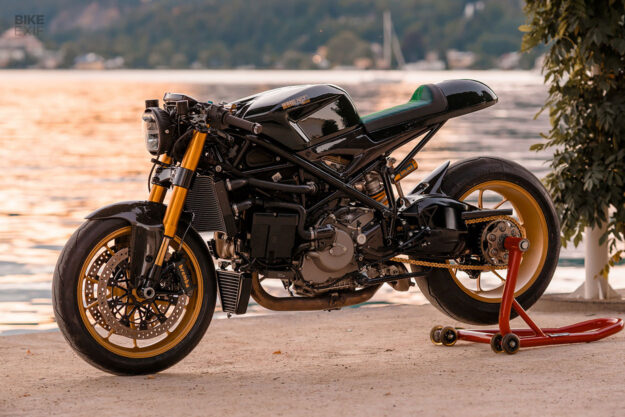 NCT chose to rework this Italian stallion without clothes, so gone are the factory fairings and bodywork. A new subframe supports a classic café racer-style seat unit, made of carbon fiber. The rear hump houses a range of electrical parts, and has an LED tail light integrated into the rear.

NCT developed their own carbon side covers to tie the new seat into the tank, and all the plastic covers on the engine we replaced with carbon parts. Up front is a round LED headlight, supported by custom mounting brackets. 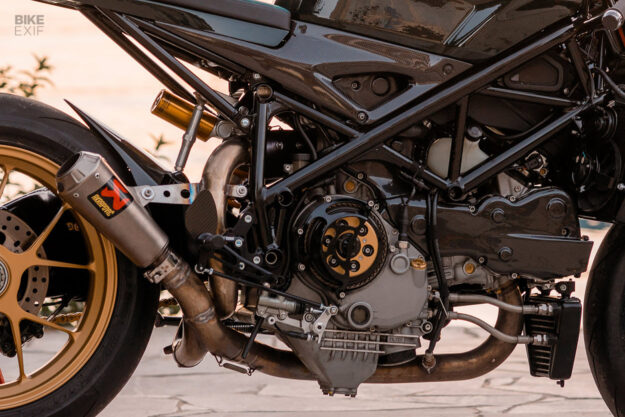 A new Akrapovič exhaust system replaces the underslung factory exhaust. Together with a retuned ECU, it now yields 20 extra horsepower. Weighing in at just 156 kilos [344 lbs] and now pushing out 180 hp, this thing must be a blast to ride.

Finished in British Racing Green with the wheels painted gold to match the factory Öhlins forks, the completed bike cuts a fine figure. 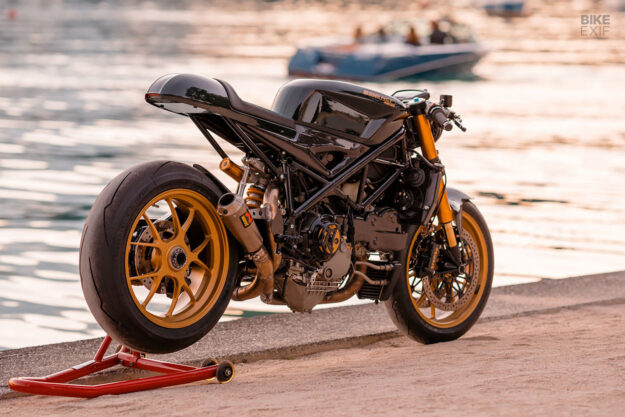 Now that the test build is complete, NCT is taking orders for customer bikes. So if you’d like one, get in touch with them quickly. Given the option between taking a stock 1098 and this on a twisty mountain road, you know which one we’d choose. [Source] 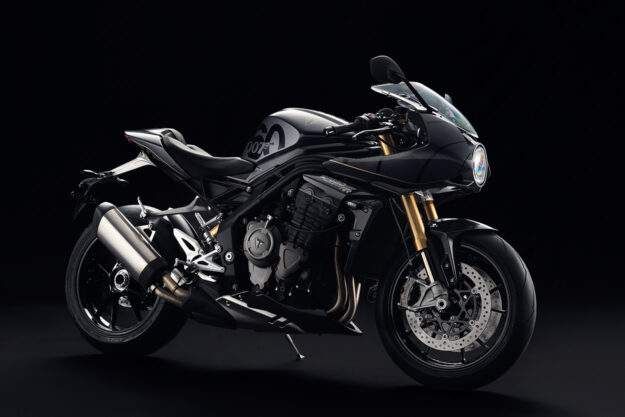 This 1200 RR wears a special James Bond 60th anniversary paint scheme. It’s a combination of black and two different greys, with the titles of all 25 James Bond films listed on top of the tank, each in their original title font. 007 graphics and gold pin-striping add more detail, and there’s a gun barrel design on the fairing which, admittedly, looks quite nice. 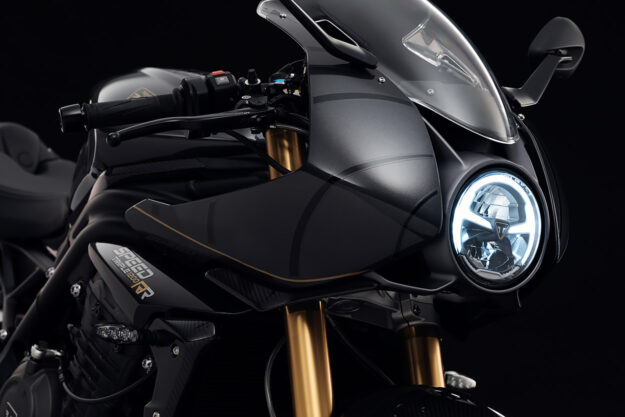 Numbers are limited to just 60 worldwide and each bike is individually numbered. A hand-signed certificate of authenticity and a Bond-themed indoor bike cover is included.

As far as we can tell, it’s a ‘regular’ factory Speed Triple 1200 RR underneath the paint job. But that’s a good thing—it’s one of the best-looking bikes in the entire modern classic segment, and it has the go to match the show.

The 1,160 cc triple-cylinder produces 180 PS at 10,750 rpm and 125 Nm of torque at 9,000 rpm. There’s a full suite of electronic safety features, a large TFT dashboard, electronically adjustable semi-active suspension, and Pirelli Diablo Supercorsa SP V3 tires. It all comes together to make a convincing argument as to why you should park one in your garage. 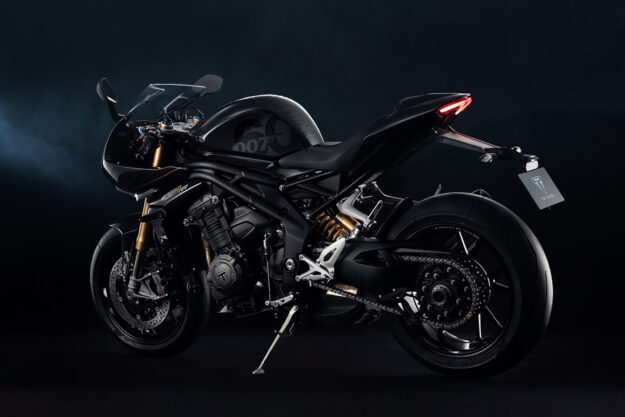 If you can look past the obvious marketing ploy, and the fact that Bond hasn’t actually ridden this bike in any of the films, there’s no denying this is a pretty bike. If you’d like to own “a piece of motorcycle and film history,” then get in touch with your nearest Triumph dealership.

Or don’t. Because, just like Bond, we all know that Triumph will be back (presumably with yet another Bond special edition). [Triumph Motorcycles] 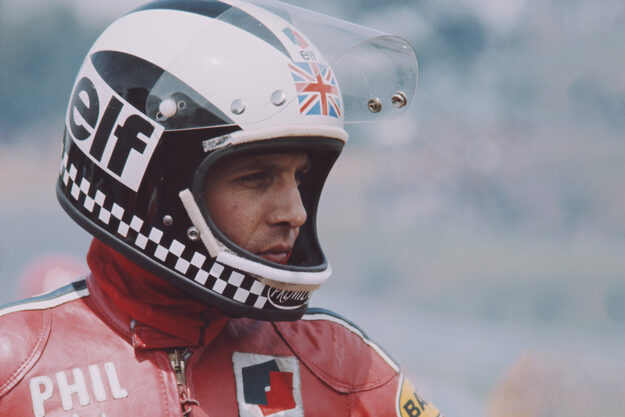 Vale, Phil Read The motorcycle world lost a true legend of the sport this week, with the passing of eight-time world champion, Phil Read MBE.

Read was the first rider to win the junior, intermediate and senior world championships which, in those days, were the 125 cc, 250 cc and 500 cc classes respectively. To put that in perspective, only two others have ever matched this incredible achievement—two gentlemen by the name of Valentino Rossi and Marc Marquez.

Phil triumphed in an age before many of the safety devices and regulations we are familiar with today. Half-helmets and basic leathers were common on the grid. There were no articulating gloves and boots or carbon fibre helmets, and there were certainly no airbag suits. Lives were lost in every season that he raced in, but despite the danger, Read rose to the top and lived his life like every moment was his last.

Phil passed peacefully at his home in Canterbury, England. He was 83 years old. [Source: This great account of Phil Read’s life and achievements, by accomplished MotoGP journalist, Mat Oxley] 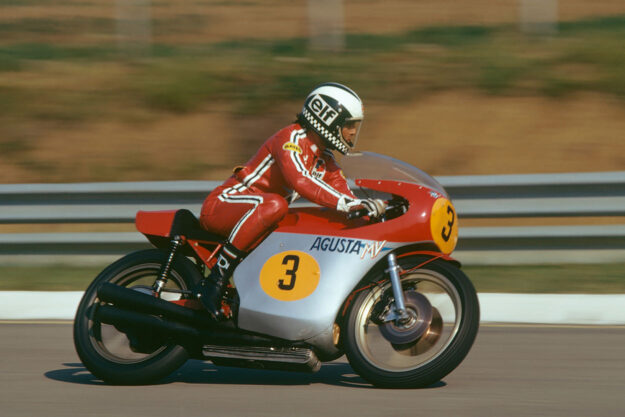