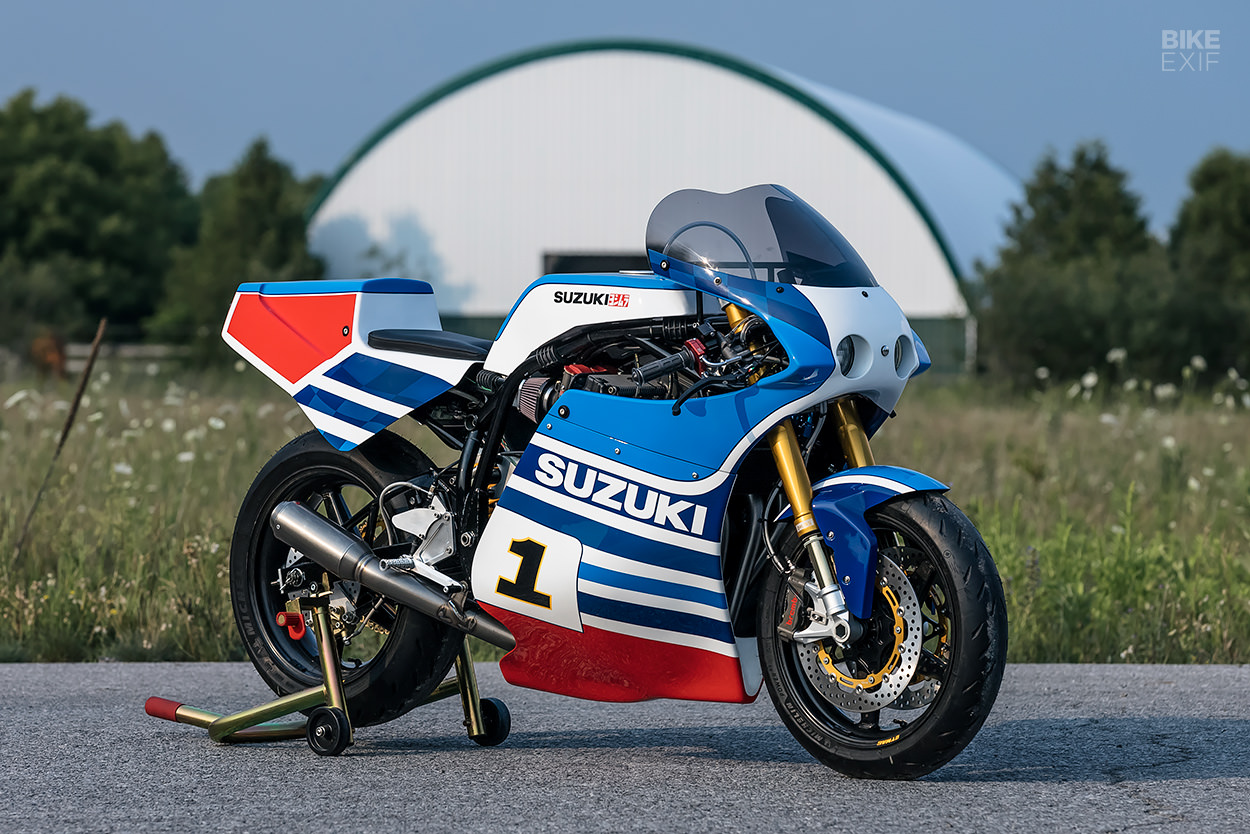 The Suzuki XR69 holds a special place in classic superbike lore. That puts it well inside the wheelhouse of Canadian builder Darren Begg, who specializes in fast bikes from the late 70s and 80s. He’s just finished piecing together this stunning XR69 replica—with a slightly period incorrect spec sheet.

“It’s not a traditional GS1000-engined XR69,” he admits, “but I’m not much of a traditionalist. So it’s my interpretation of this historic racer.” 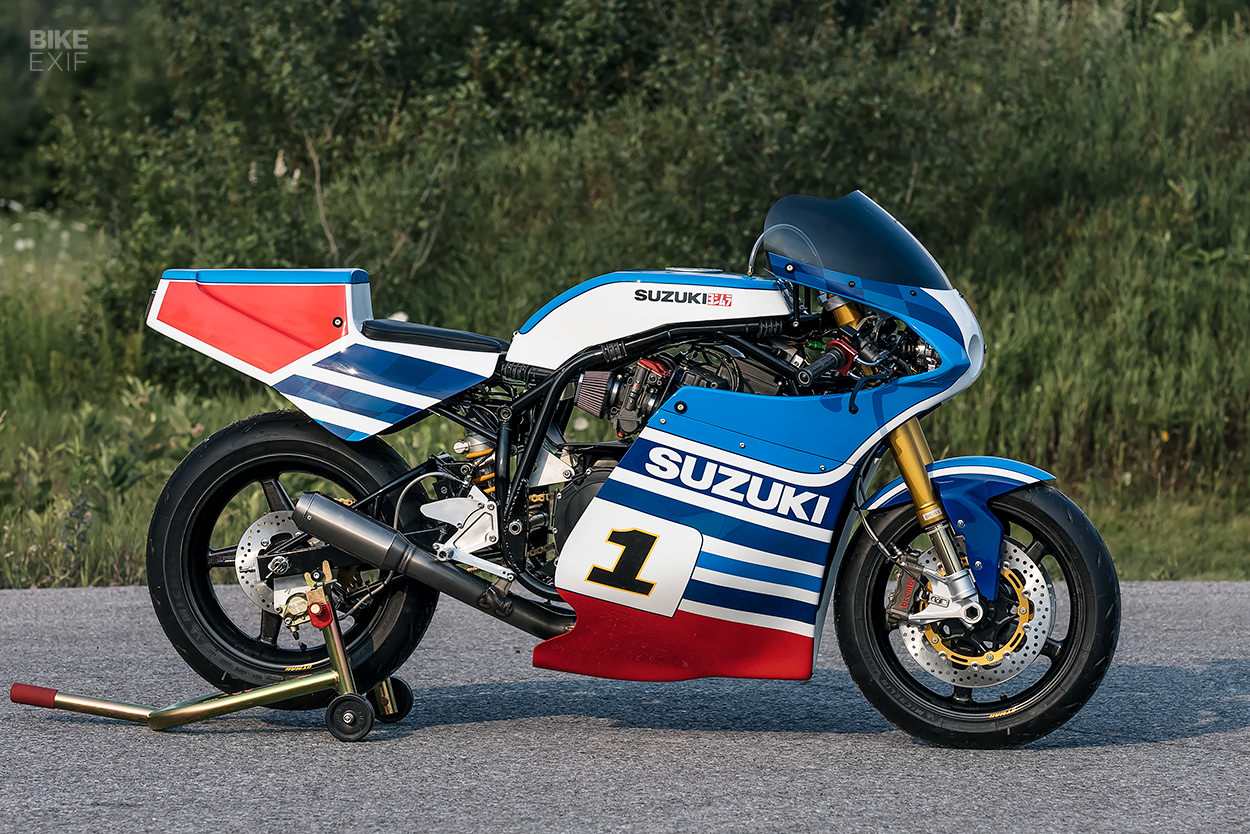 Darren operates as dB Customs out of Ottawa, Canada. He’s also a dealer for a few top-shelf parts manufacturers, so he’s a master of piecing together the best of the best on his projects. His idea here was to build a series of ten street-able XR9 replicas using his favorite components—plus a very special chassis.

This one’s the first in the series, as the number on the side of the fairing suggests. 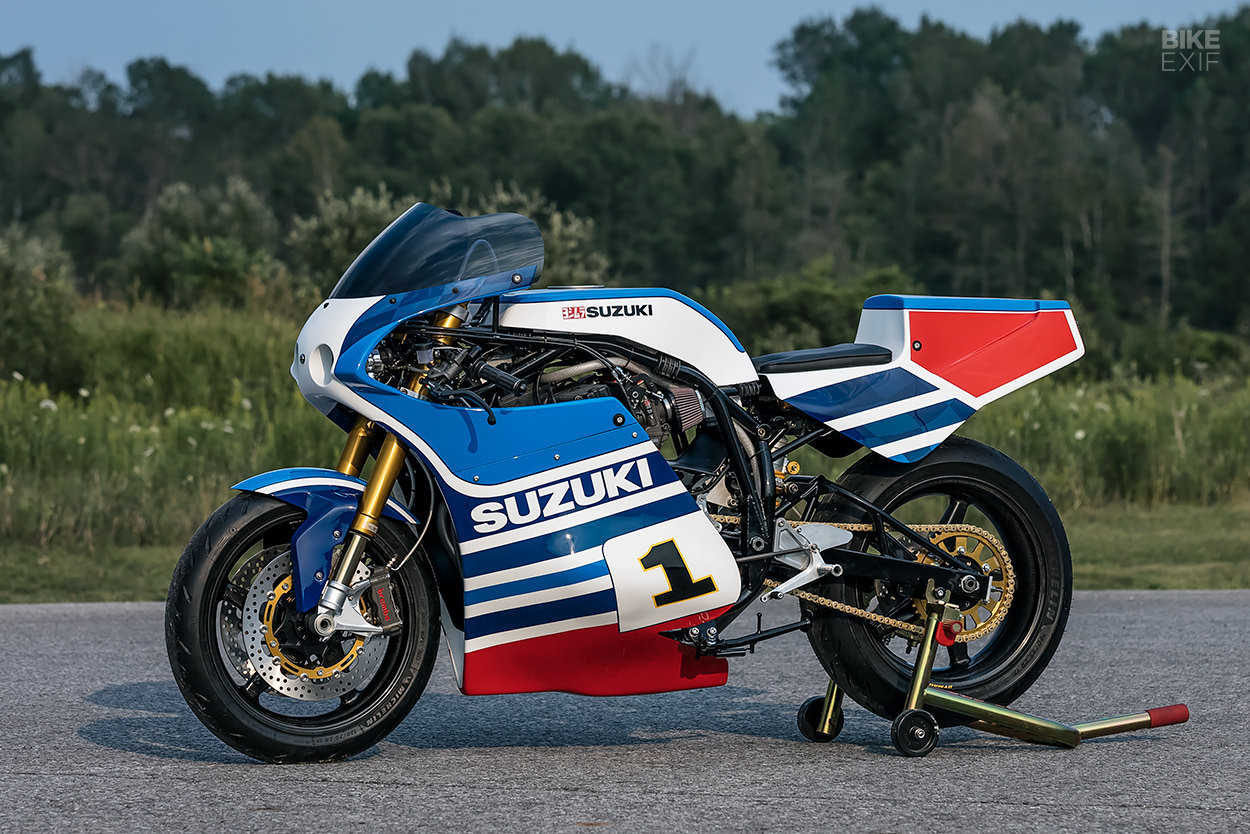 The XR69 was originally developed by Pops Yoshimura and Suzuki, and cleaned up when it hit the racetrack in 1980. It was powered by an eight-valve motor derived from the GS1000—but Darren’s replica borrows its motor from elsewhere in Suzuki’s back catalog.

Powering this retro-fabulous superbike is the motor from a 1997 Suzuki Bandit 1200. Darren refreshed the motor and topped it off with an early GSX-R750 head: “It has more of a down draft design, with smaller combustion chambers for added compression,” he explains. 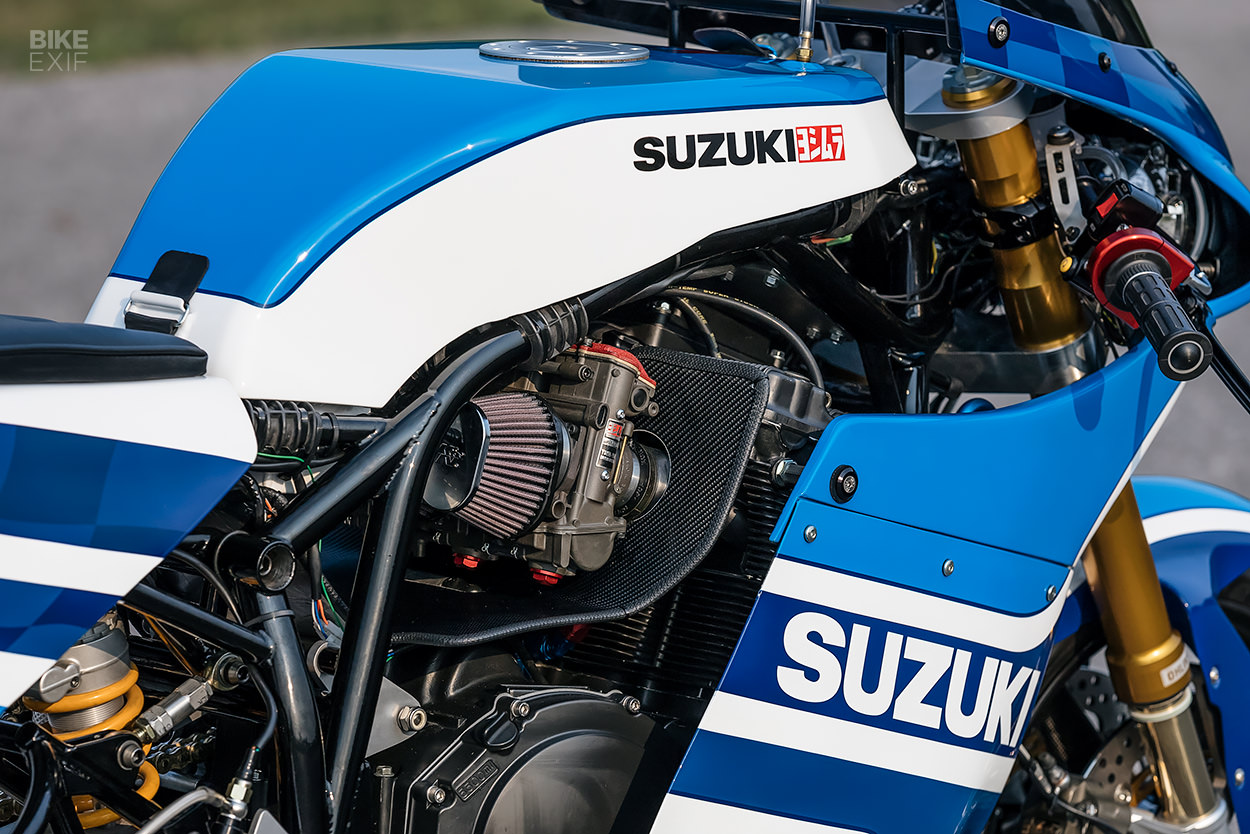 Inside are the cams from an oil-cooled GSX-R1100 and Kibblewhite springs, with spark coming from a Dyna 2000 ignition. The engine breathes through a set of gorgeous Yoshimura TMR-MJN carbs with K&N filters, and exhales through a lightweight four-into-one titanium exhaust system from Racefit.

The chassis offers closer ties to the XR69: “CMR Racing in Trenton, Ontario was building XR69 chassis for Team USA and others who competed at the Island Classic at Phillip Island in Australia,” Darren tells us. “The chassis were highly competitive and setting lap records in their class, mere seconds off the pace of modern superbikes.” 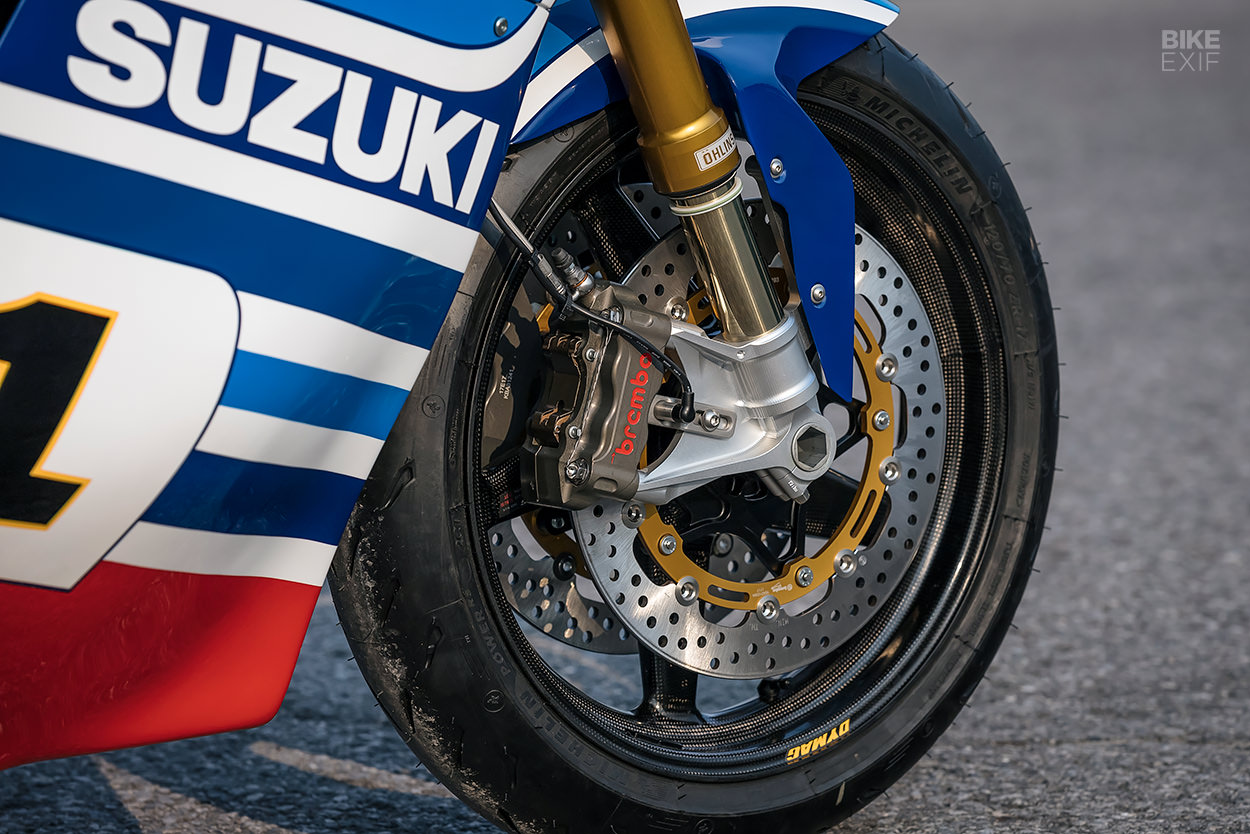 CM Racing’s Byron Cox and Denis Curtis, who sadly passed away late last year, fabricated a pair of 4130 aircraft grade tubular chromoly steel frames, for the first two commissioned builds. And they supplied the swingarms and fuel tanks too.

Darren completed the chassis with Öhlins suspension at both ends, including a set of forks originally designed for a BMW S1000RR, with 10 mm additional length and stroke. The wheels are ultra light carbon fiber items from Dymag, wrapped in 17” Michelin Pilot Power CT2 tires. The brakes are Brembo calipers with twin 320 mm discs up front, plumbed with Spiegler lines. 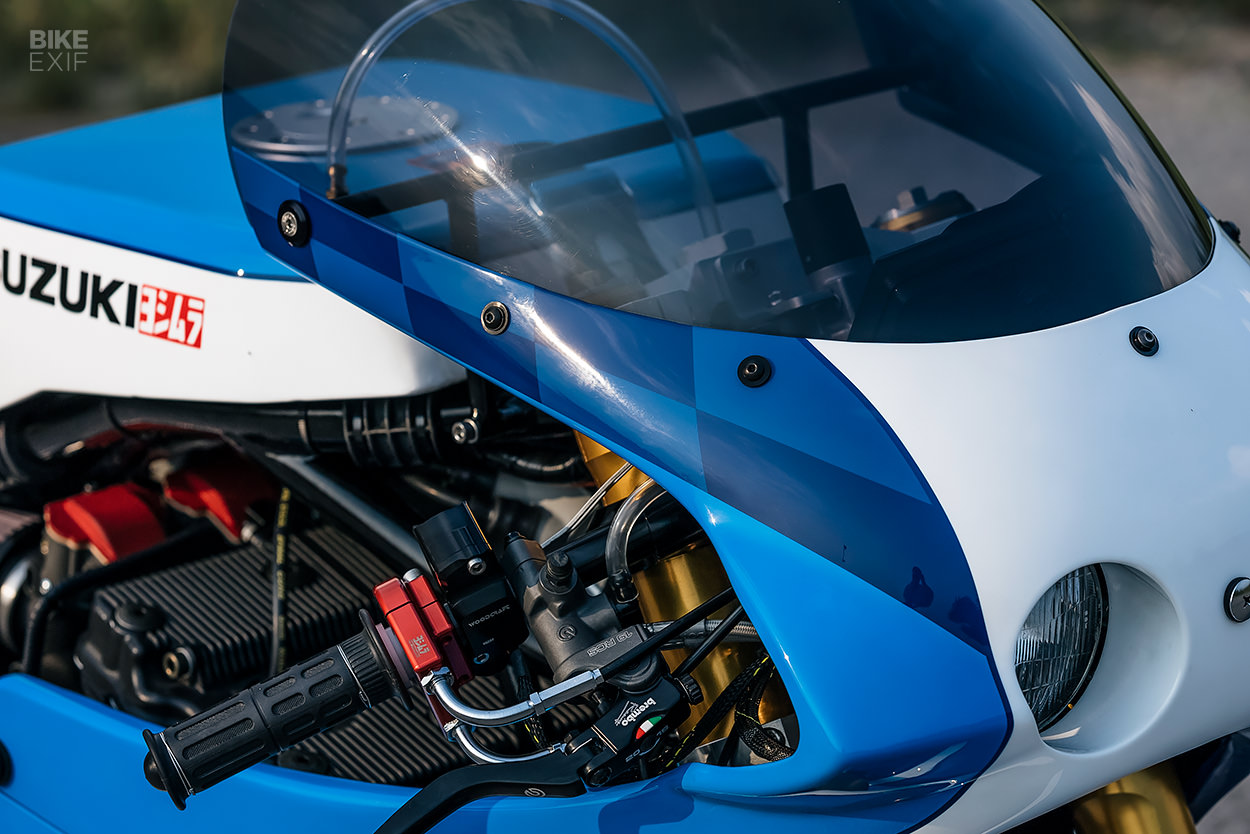 For the bodywork, Darren designed a fairing and tail in the style of the XR69, then had the parts shaped out of carbon fiber. The fairing uses a pair of headlights from a Honda VFR400 NC35. Just behind it is a Koso dash, with clip-ons, race-style switches, Brembo controls and a Yoshimura throttle. 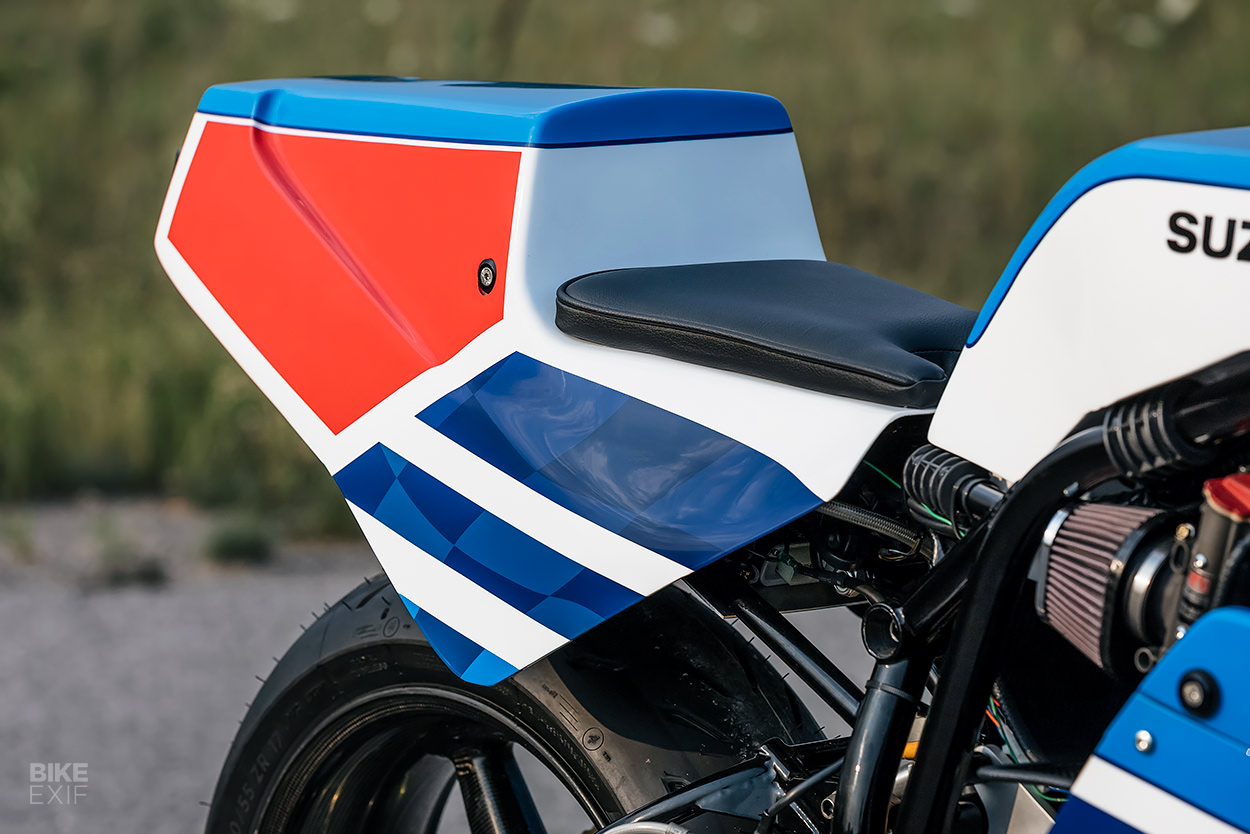 Darren’s designed a few livery options that potential clients can pick from, with inspiration from various classic Suzuki race bikes. The options even include a red and black tribute to the original XR69 paint scheme—but so far, everyone’s interest has fallen on this blue design. “It’s hard to deny that some inspiration didn’t come from Team Classic Suzuki’s rendition as well,” he admits.

Regular collaborator Sketch’s Ink laid down the livery. It’s all paint too, with not a single vinyl graphic in sight. 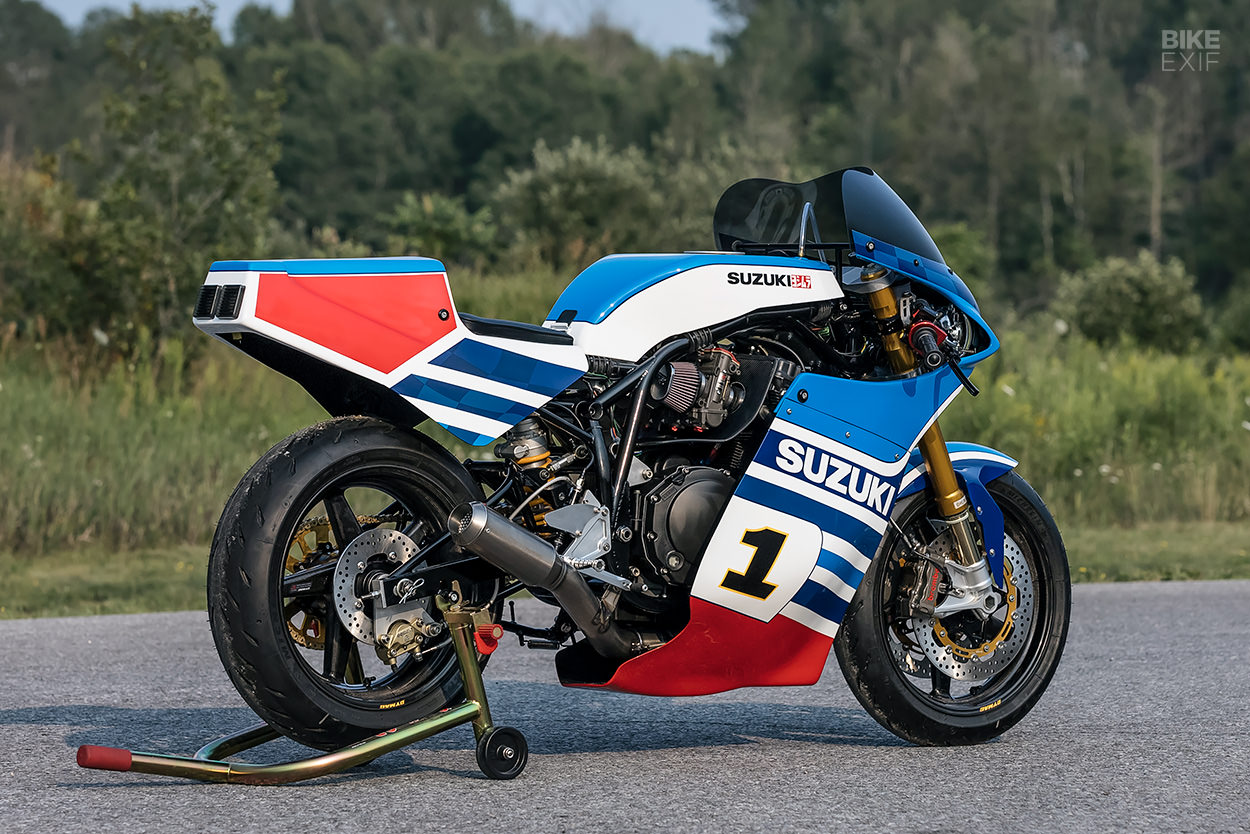 Darren’s first XR69 replica series build is flawless, and looks like it’d be nuts to ride too. This one’s off to New Zealand, and the second one, which is currently being assembled and “will be a killer 1,216 cc monster,” is destined for California.

Should we keep tabs on the other eight builds? 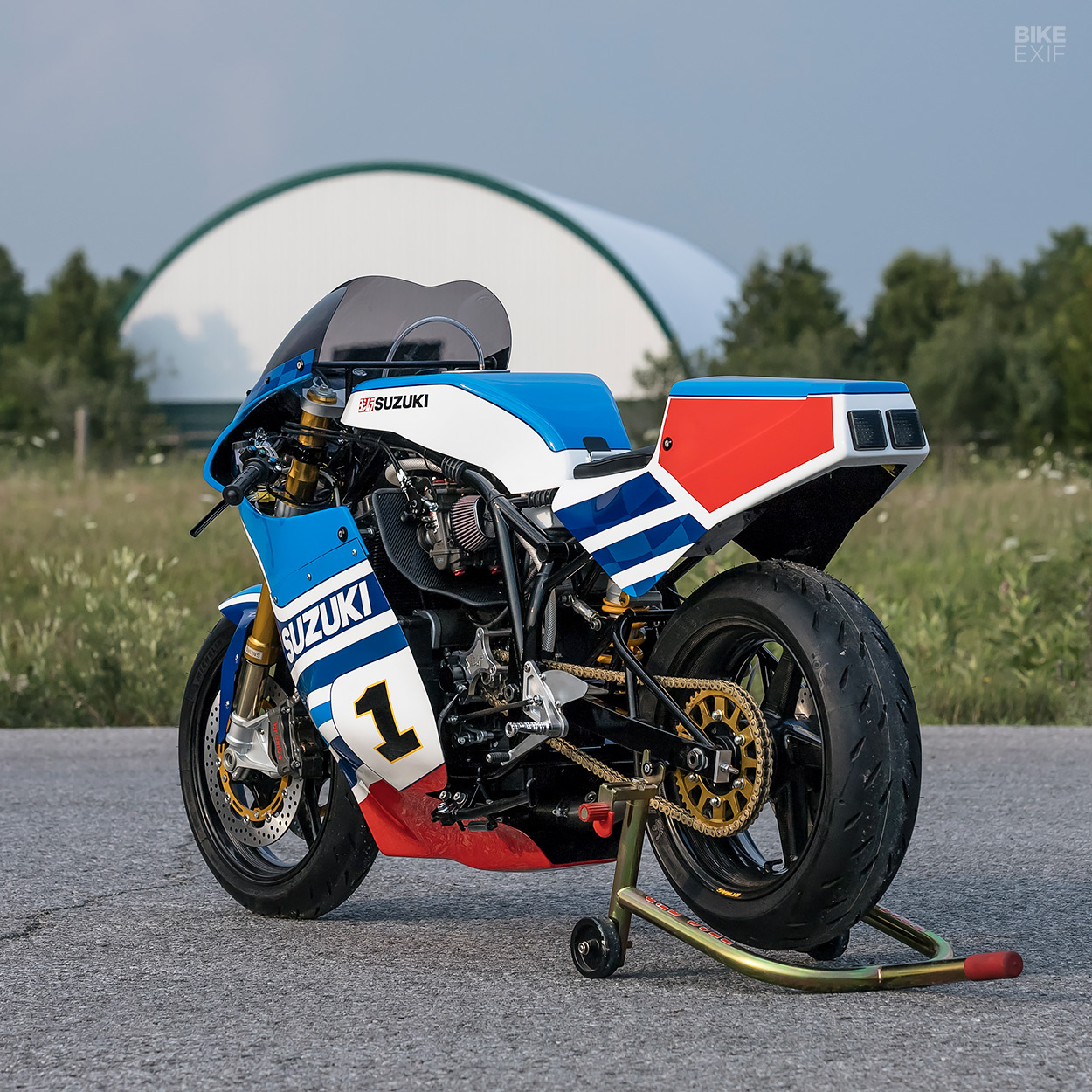