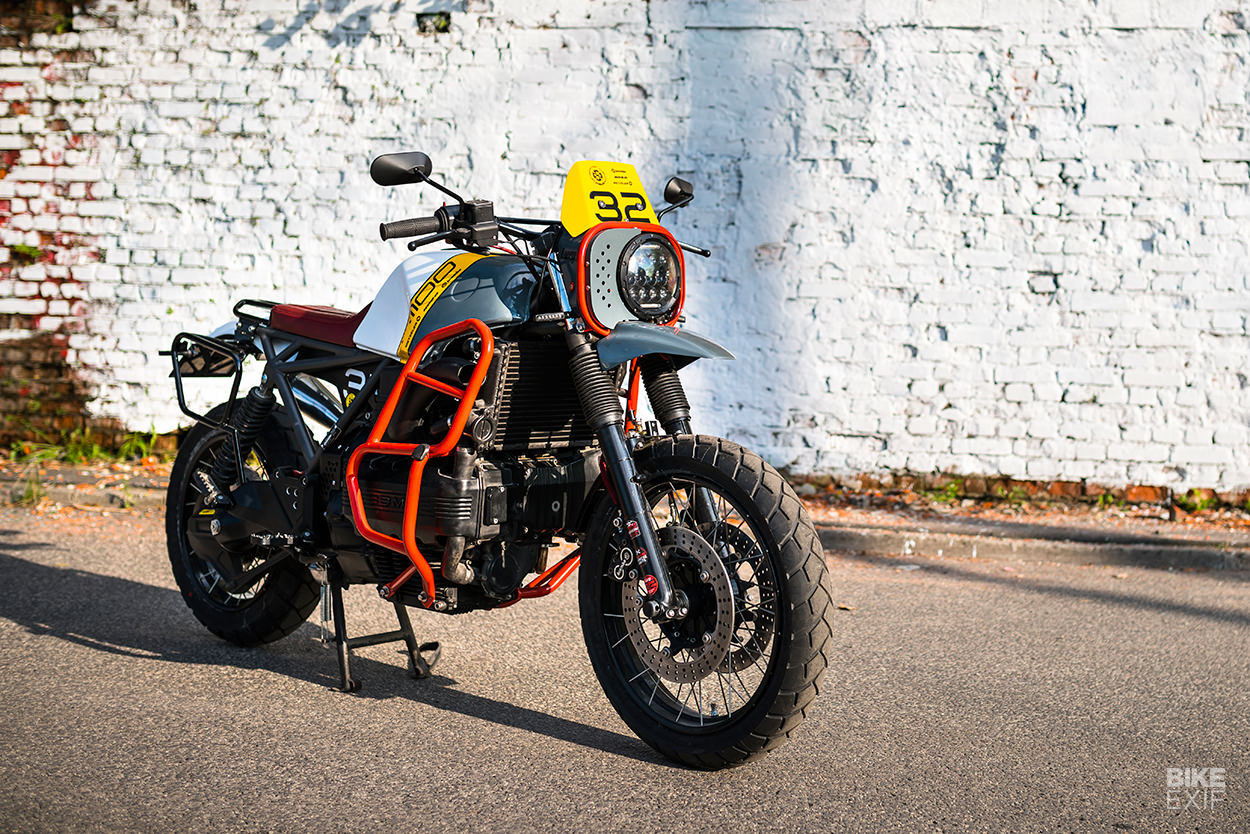 Back in the 90s, if you wanted a big touring motorcycle, the BMW K1100LT was probably on your shortlist. It was the first Beemer to displace more than a liter, with a fuel-injected engine and low-maintenance shaft drive.

Compared to the behemoths from Harley and Honda, the K1100 was a technological tour de force. And despite weighing around 580 pounds dry, it was agreeably spritely on the road. 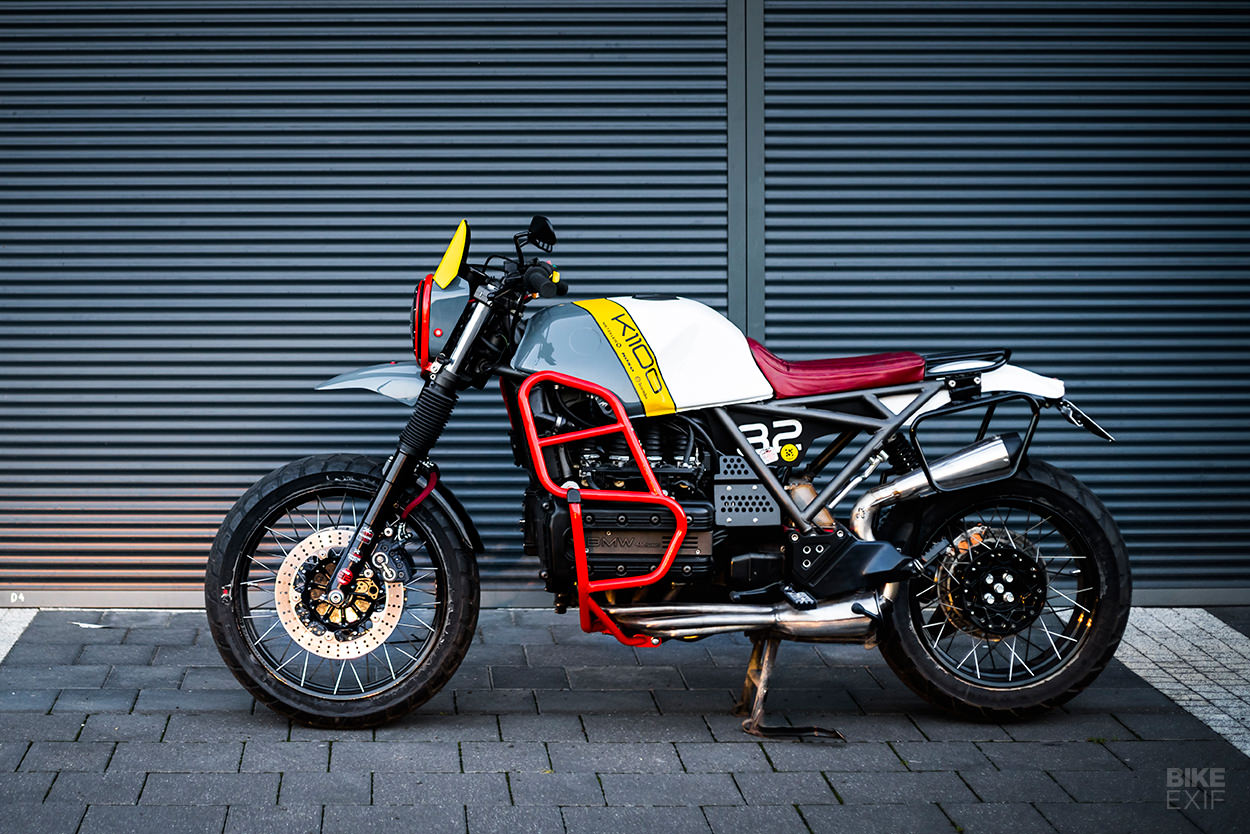 A lot of the weight of the K1100LT came from the bodywork—which included a huge fairing, panniers and a top box. Drop that lot, and you’ve got the makings of a much more nimble bike. First gear wheelies become even more of a breeze.

So we reckon this fresh-looking K (with a hint of Dakar in the graphics) will be a blast to ride. It’s the work of Jacek Mulak, who runs Cardsharper in Lublin, Poland, and the paint finish grabbed us right away. 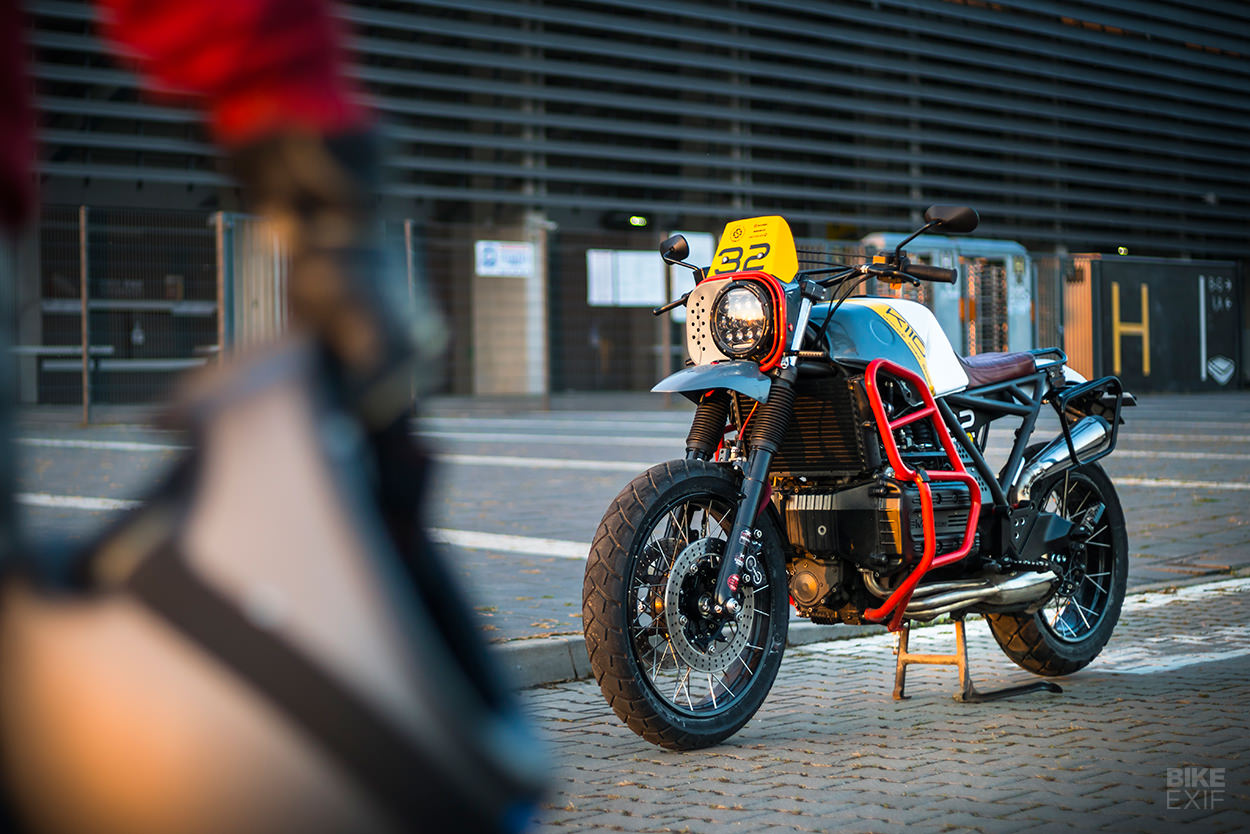 If the name Cardsharper sounds familiar to you, it’s probably because we featured Jacek’s lovely CB550 café racer a couple of years ago. But this time, Jacek resisted the temptation to join the café crowd.

“Our client likes to ride on country tracks,” says Jacek, “and he wanted to be able to put on (small) panniers. There are quite a lot of cafe racers using the ‘K’ base, so we decided to make a scrambler.” 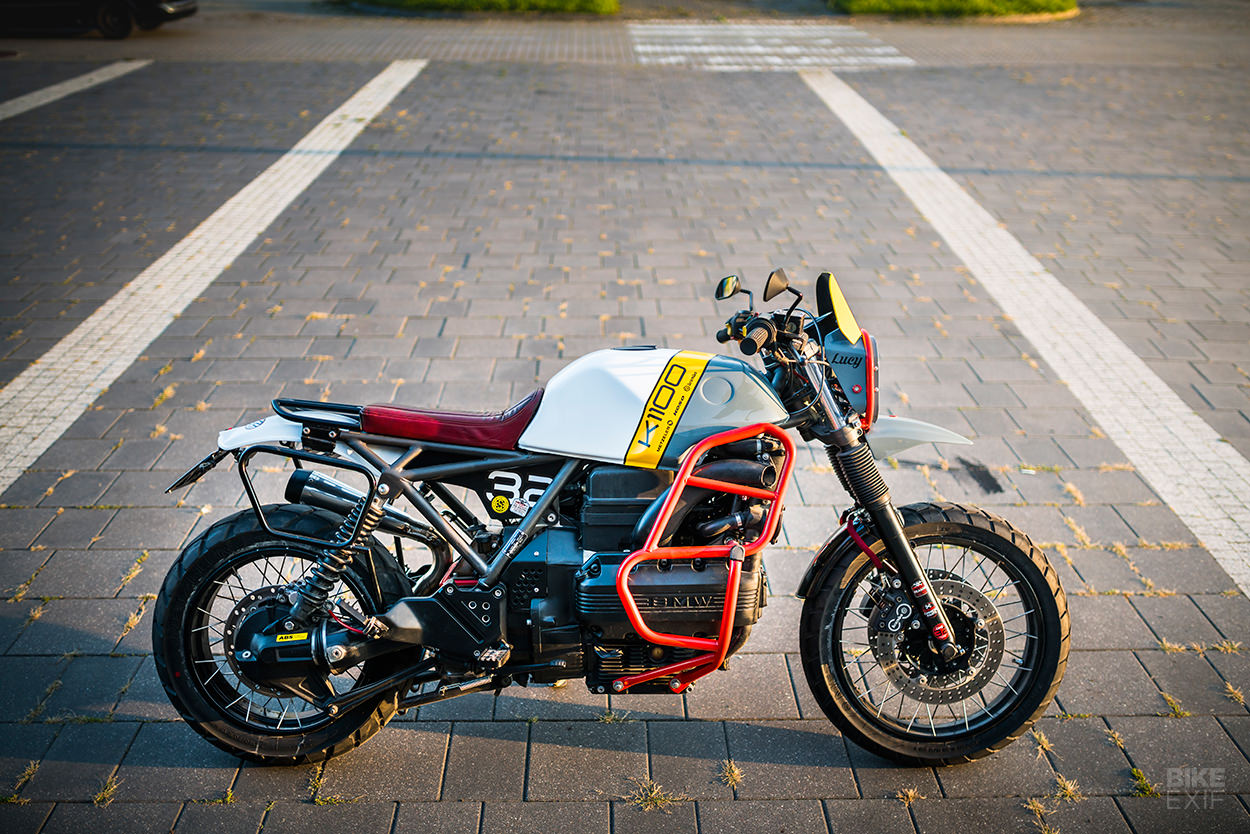 “Also, the frame is modified so that if you want a cafe racer, you can remove everything,” Jacek adds. “It’s easy to change the style of this bike.”

The scrambler transformation works surprisingly well. Granted, you wouldn’t want to go through ankle-deep mud on this K1100, but it should tackle hardpack well—and the proper fenders mean you won’t get covered in too much mud. 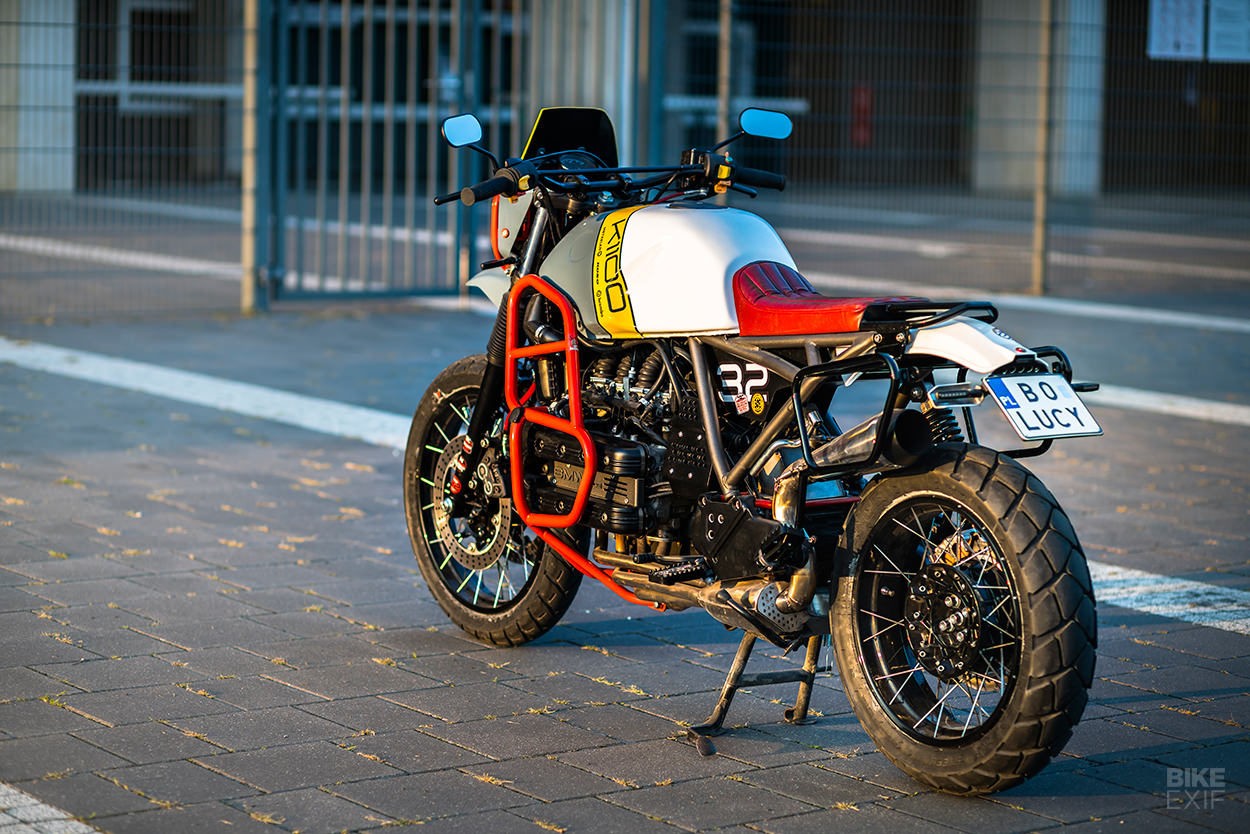 The brightly colored crashbars and new rear frame dominate the aesthetics and fit well with the tank—which often integrates poorly on K-series customs.

“The small original crash bars from the K1100 were used as a base,” Jacek says. “I welded the rest to them.” The same steel tube was used for the back of the revised frame: “It was designed to fit the line of the tank, and has two mounting brackets which hold the luggage racks.” 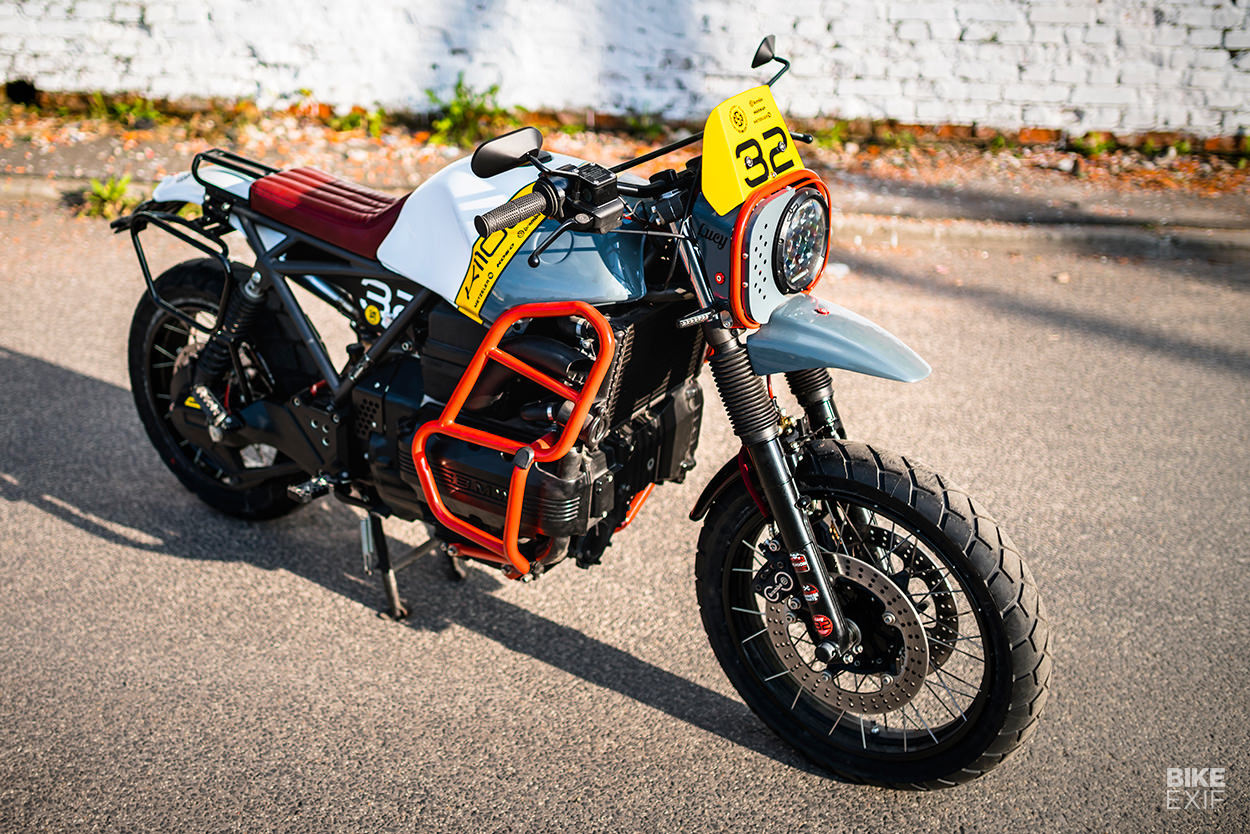 The rear luggage frames can be removed, but Jacek and his client have decided to leave them on. “We think that they add charm to the motorcycle. The idea is that you can remove them when needed—and even replace the top rack with a cafe racer seat pan.”

The rack behind the new seat is strong enough to support a passenger seat pad later on, if desired. And the electrics are neatly tucked away in a box under the seat. 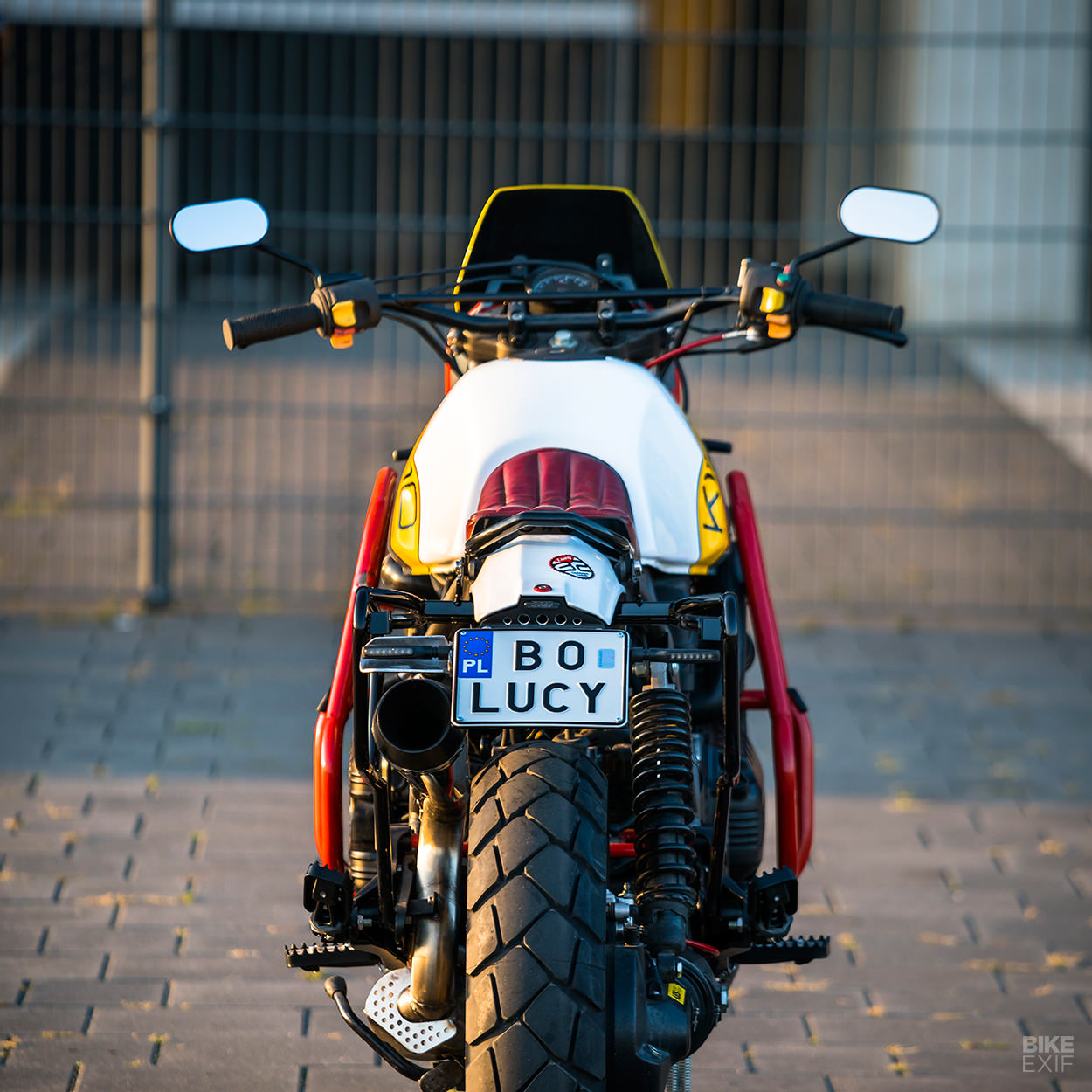 The rear fender is new, selected from a stack of spare parts Jacek had in his workshop. “I just fitted few of them, chose this one, and reshaped it to fit my needs—and the taillight,” he says. “The front fender is the original ABS plastic one from this bike, but cut and fitted higher. The back piece is steel.”

The wheelset is off-road friendly too: taken from a BMW R1150GS and refurbished with new spokes, it’s a classic F19/R17 setup. The GS donated its rear brake too, but the front dual disc arrangement is refurbished K1100. Everything is plumbed together with new lines. 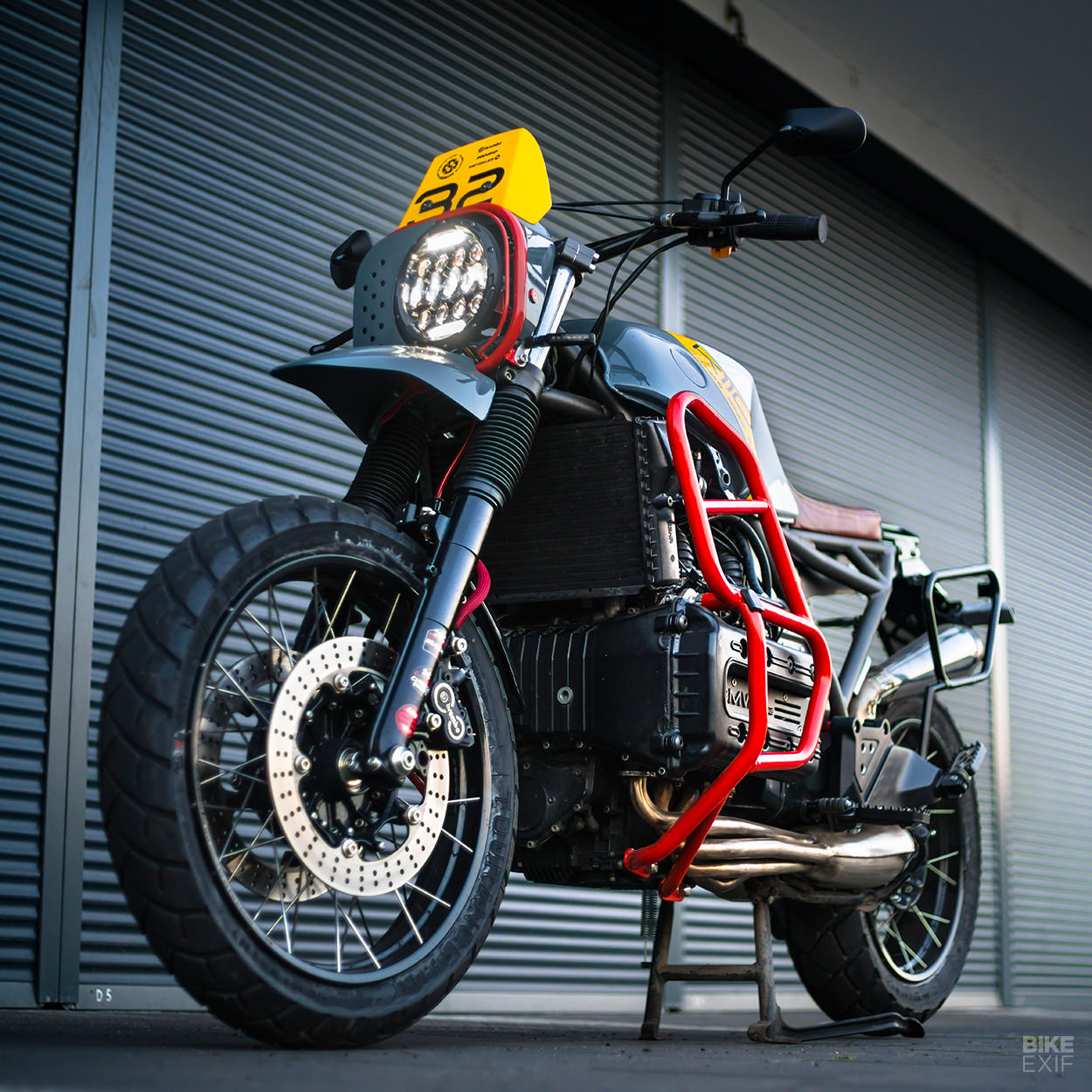 The long, low-slung muffler of the stock K1100LT would be a liability over bumpy ground, so Jacek has fitted new piping and an aftermarket muffler that terminates at license-plate level. “The sound is low key,” he says. “Even when riding fast, it’s not excessively loud.”

The entire front fairing was made from scratch, with a mini-frame hiding behind custom sheet metal. The bars and headlight are aftermarket and were an easy mod, unlike the electrics. Since this is a BMW, even something as simple as swapping out the speedo became complicated. 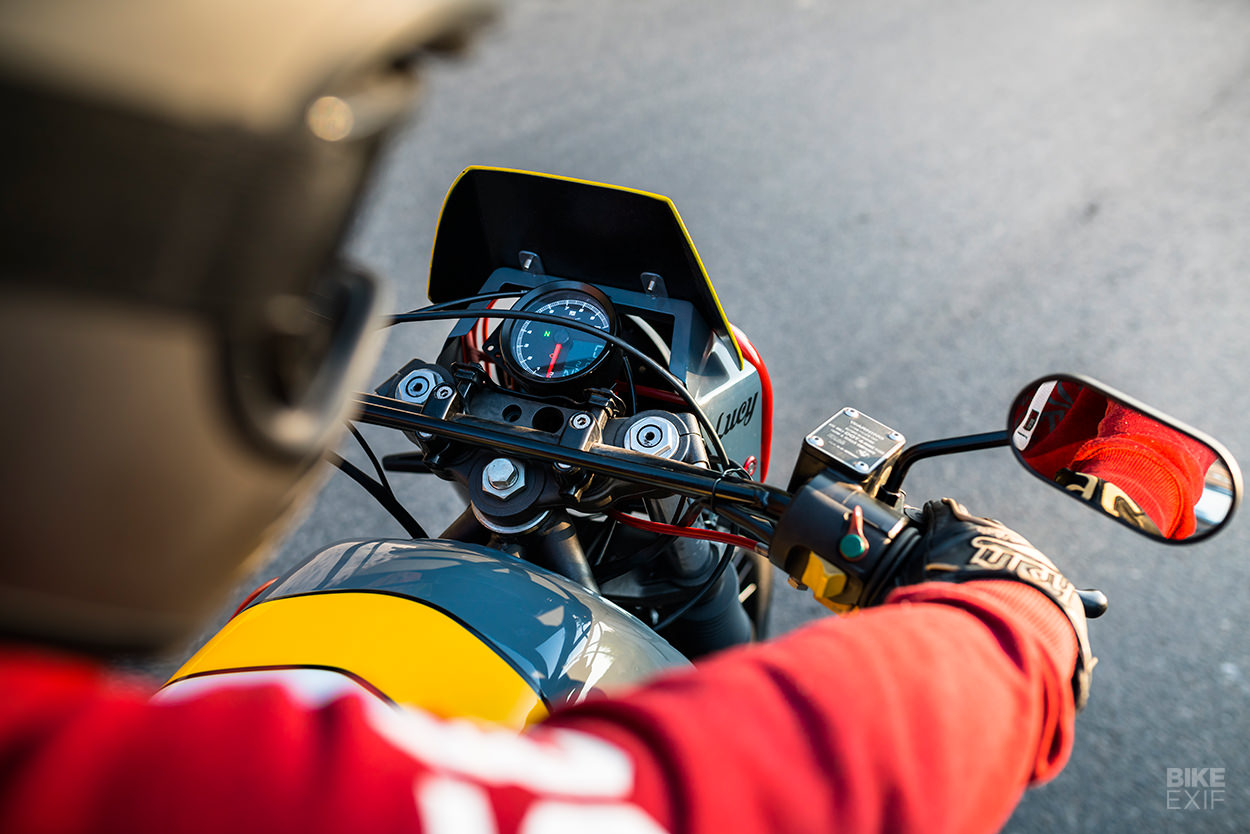 The new instrument is a discreet Koso TNT-04 ‘multifunction meter’ that shows not only RPM, but also speed, fuel level and more. To get it to work, Jacek had to wire in a BEP3.0 ‘conversion box’ from Maru Labs—but the effort was worth it for a clean and functional cockpit. A Motogadget keyless ignition system cleans things up still further.

Sometimes it’s the icing that makes the cake, though, and the multicolored icing on this Kuchen is terrific. There’s more than a hint of the Moto Guzzi V85TT in there, with the red tubing and yellow highlights, and that’s no bad thing. (“I swear that’s random,” Jacek laughs.) 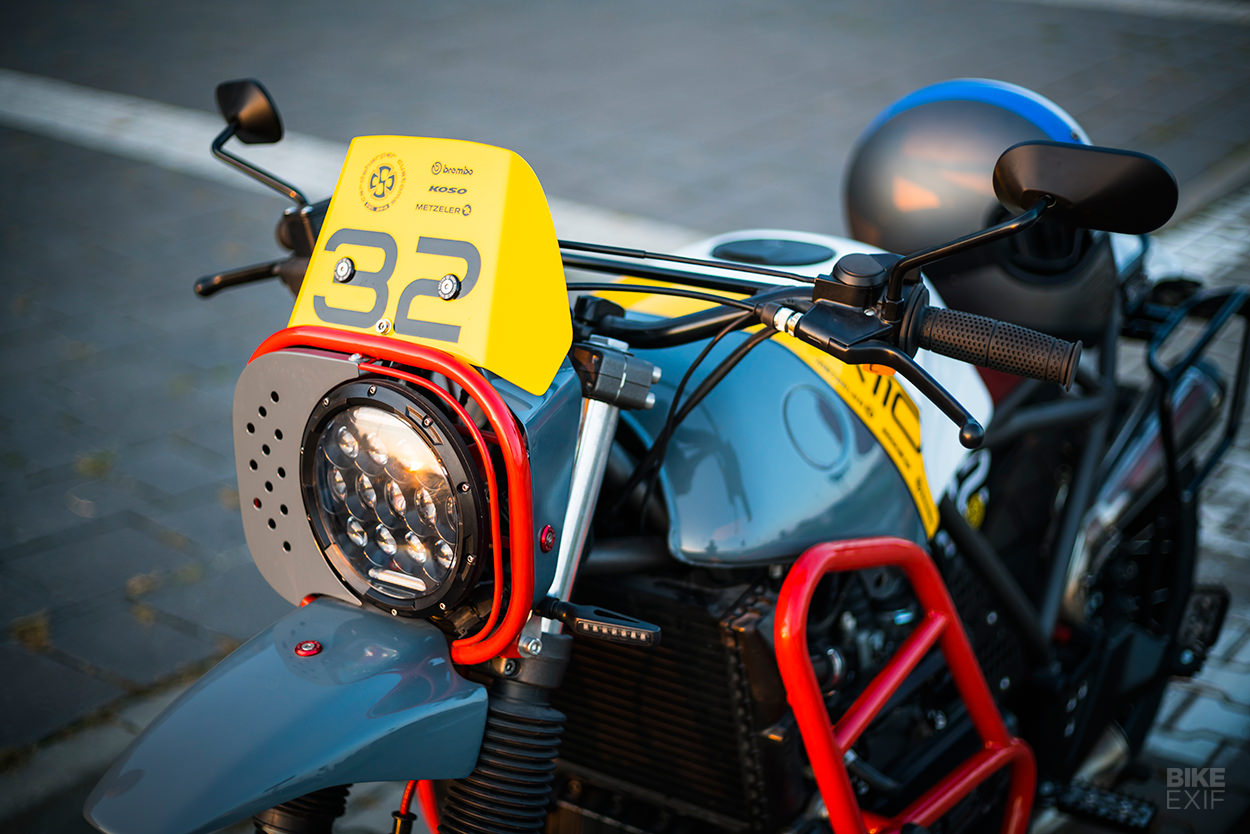 There’s nothing else random about this build though. It’s just a well planned, smartly executed custom that should provide years of fun—and is probably a million miles away from what the BMW designers envisaged three decades ago. 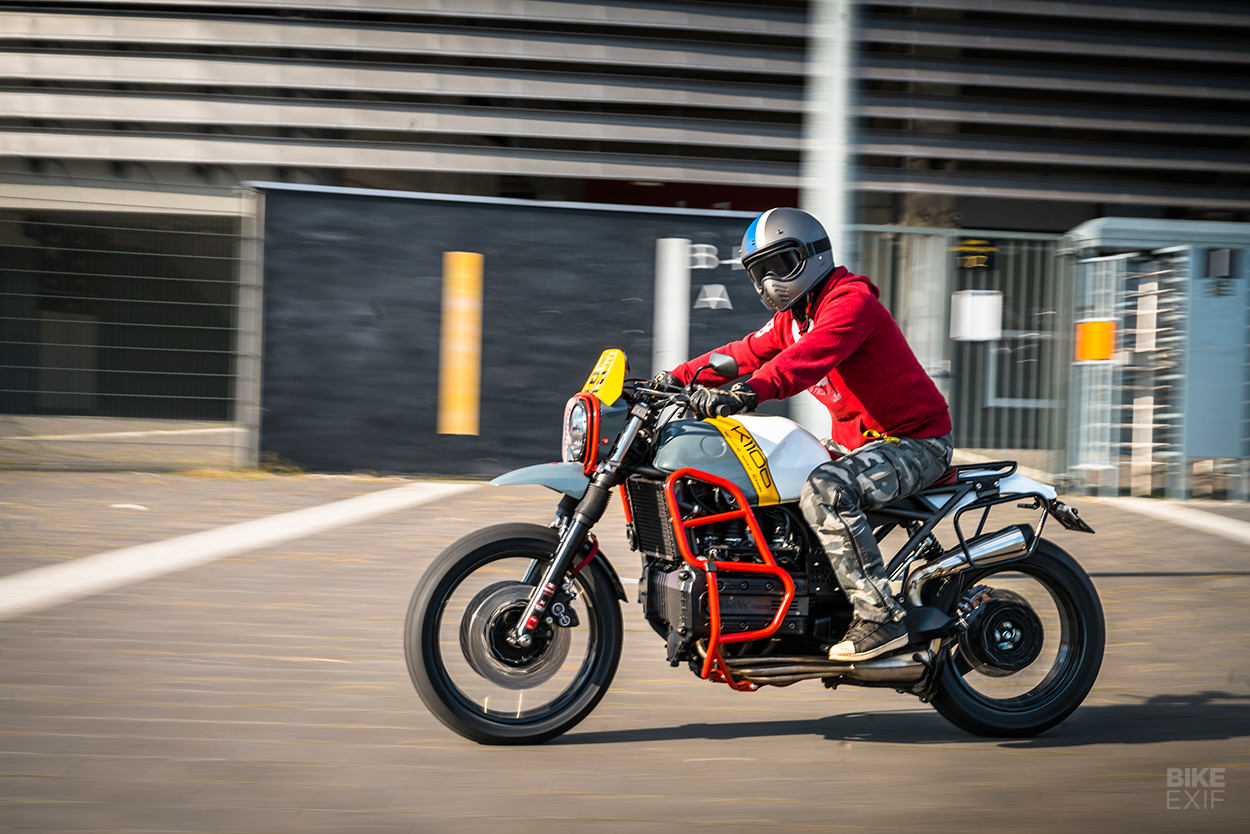