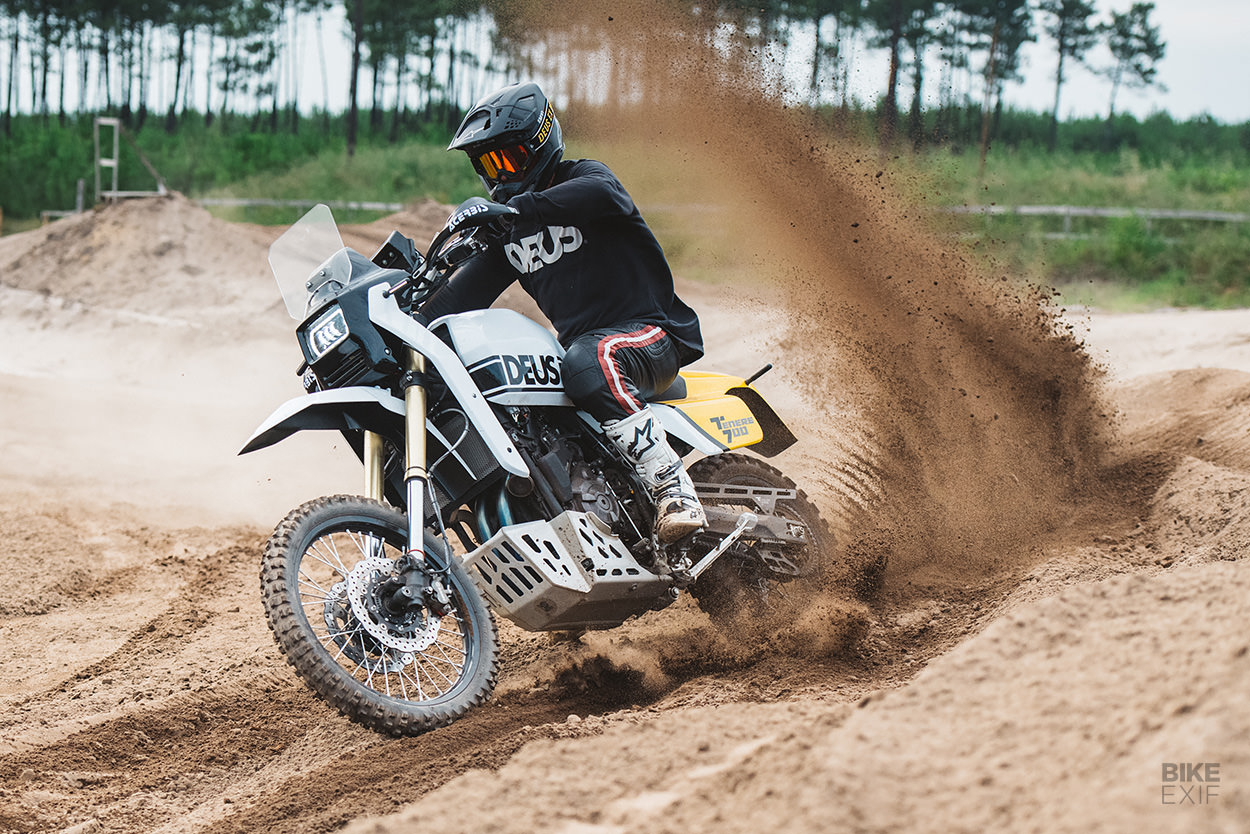 By all accounts, the new Yamaha Ténéré 700 is a smash hit. Its 689 cc parallel twin motor is a total peach, and its no-frills approach, off-road chops and rally racer looks add to its mass appeal. But we never would have pegged it as a platform for customization.

Deus ex Machina Italy saw potential in the T7 though. They’ve given it a massive shot of retro rally raid style—resulting in a radical and stylish machine that doesn’t sacrifice a stitch of performance. 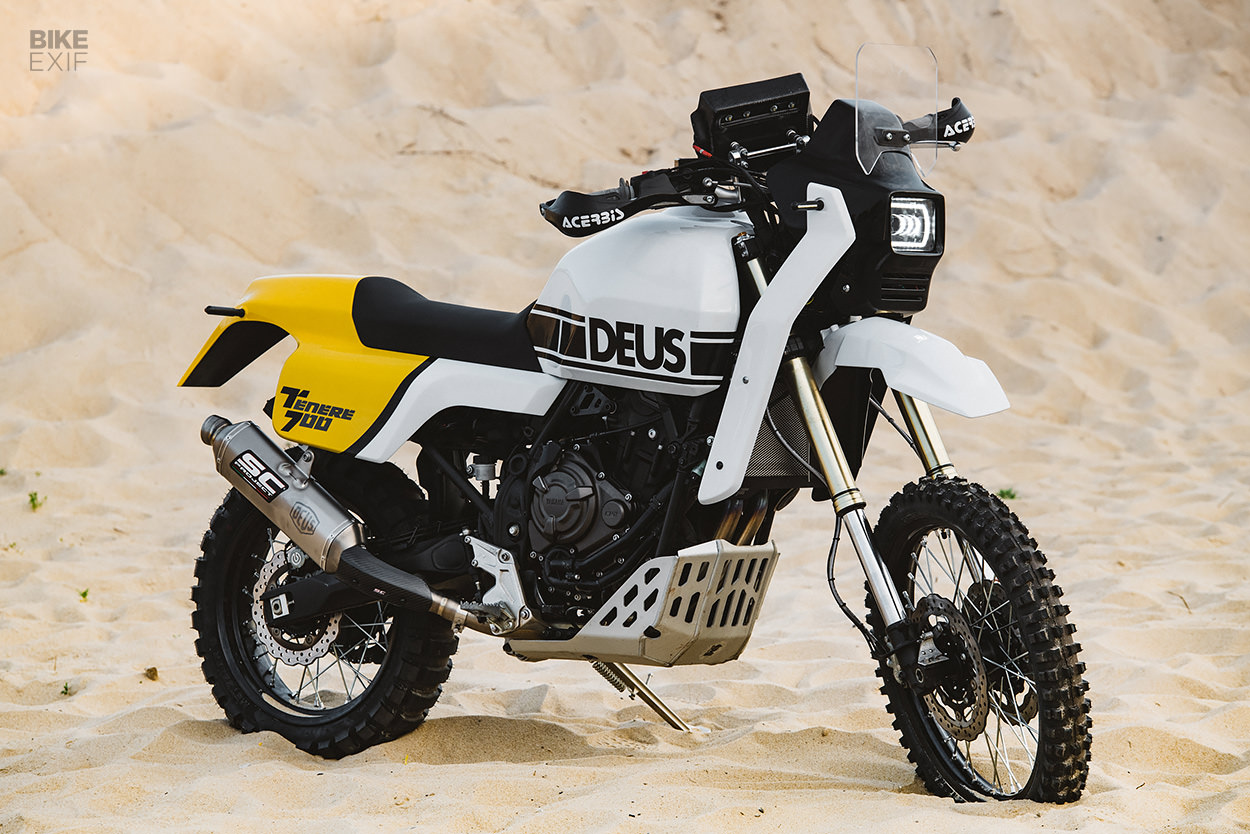 Redesigning a modern dual-sport is a bold move, but the Deus Italy team was clever about it. They took the kit build approach, by binning the T7’s stock plastics, and creating a whole new set of bodywork to sit on its solid bones.

Deus Italy worked with Camal Studio, who helped them design a new body kit using 3D software. Next, they 3D printed prototype parts to make castings, so that the final pieces could be shaped with fiberglass—and so that they could be replicated. (Deus might offer this as a plug-and-play kit if there’s interest.) 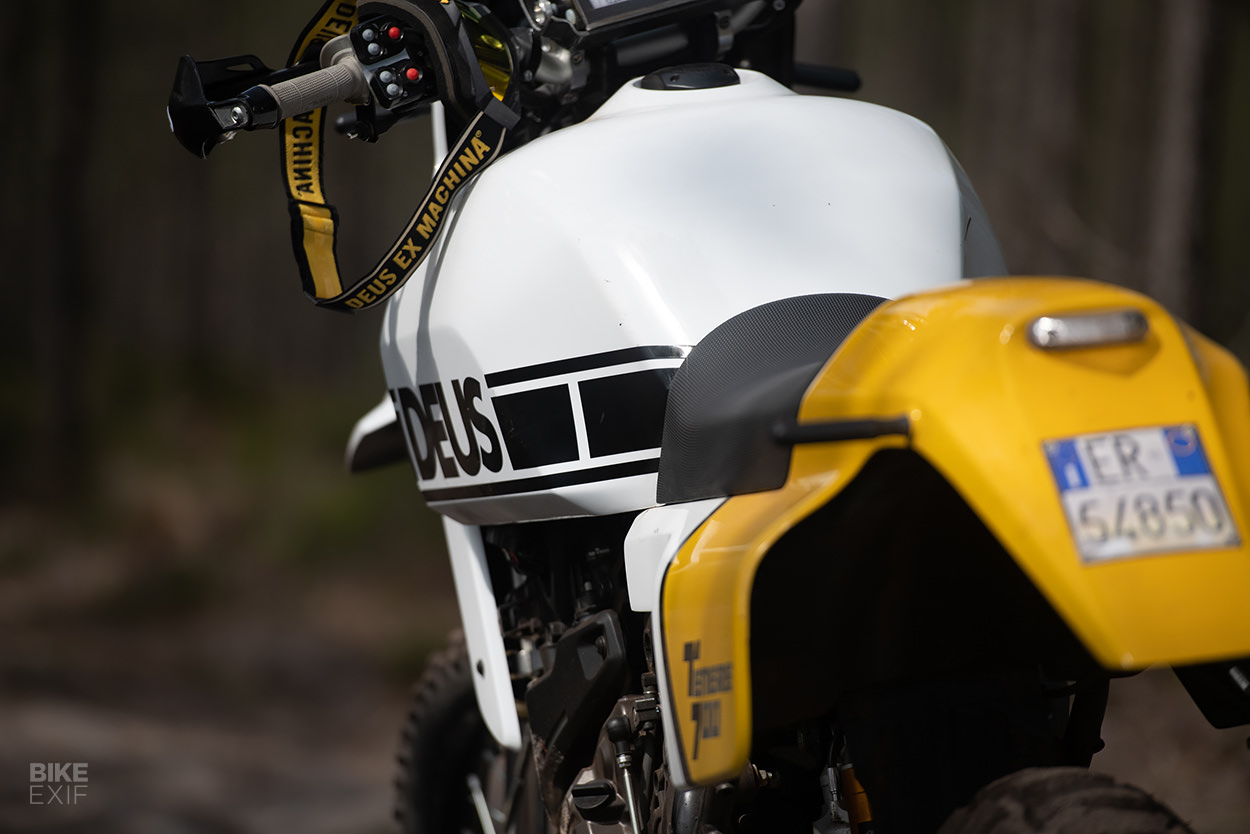 Central to the bodywork is a bulbous tank cover that hints at the ‘camel’ tanks on the Yamaha desert racers of old. It fits over the T7’s OEM fuel cell, and mounts to existing mounting points on the frame. It’s also perfectly lined up with the original filler tube, with a new gas cap rounding it off. 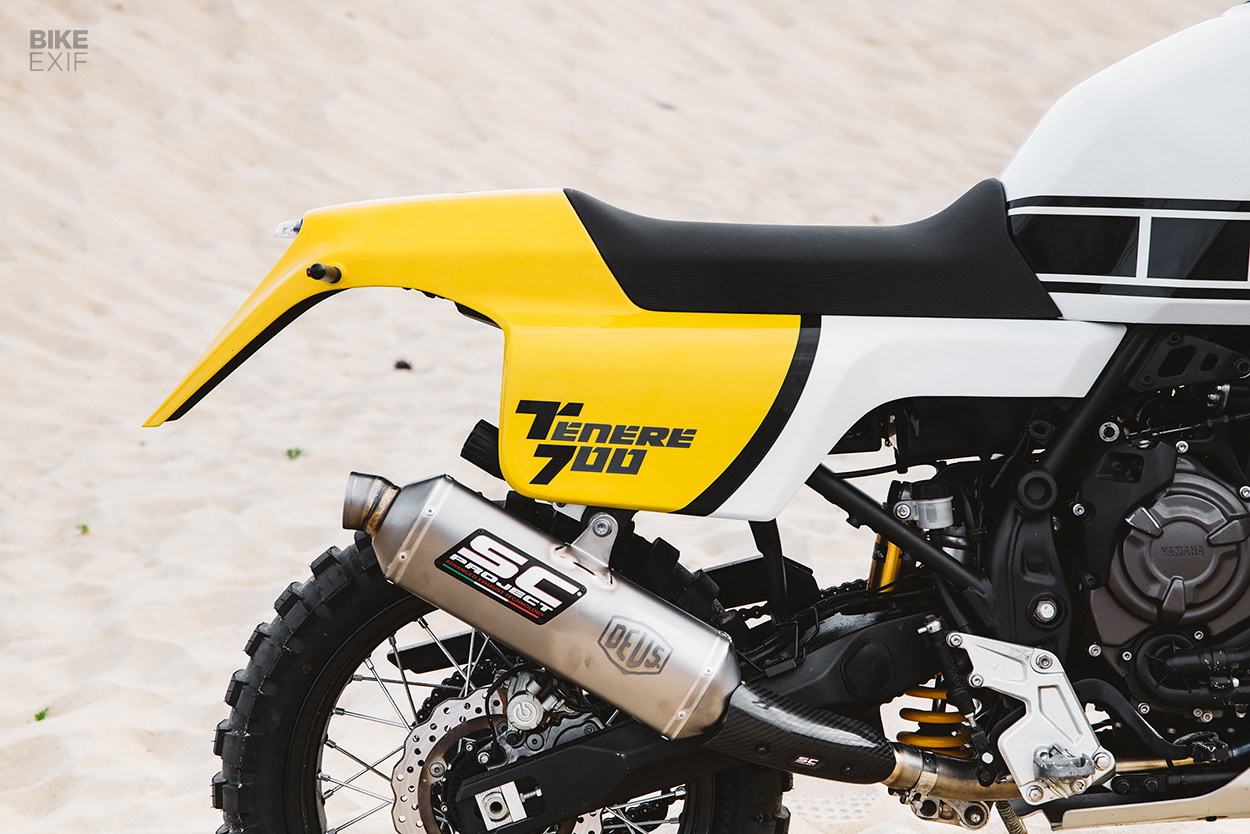 Further back is a new tail unit, featuring a boxy, elongated design that’s reminiscent of the 1980s XT600 Ténéré. There’s a custom seat up top, and the back end is finished off with an LED taillight and a pair of ultra-skinny LED turn signals.

The tank and tail are finished in a striking white and yellow livery; a perfect hit of classic Dakar nostalgia. 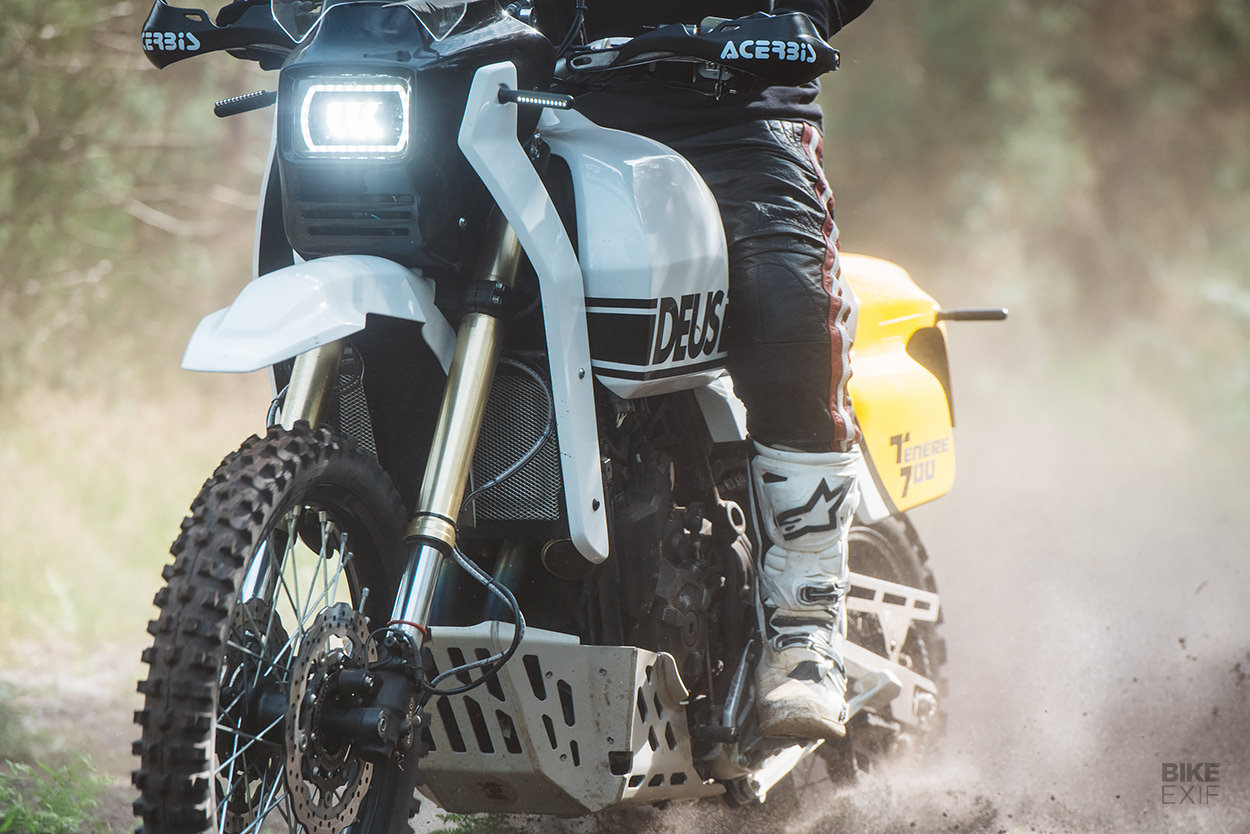 The front end follows more vintage Dakar rally cues. The headlight nacelle looks like it could have come off an old dirt bike, but it’s actually another custom piece. It hosts an LED headlight and a clear acrylic screen, and wraps around the Yamaha’s stock dash.

It’s flanked by a pair of side fairing strips that double up as radiator protectors, and use the front turn signals as upper anchor points. The front mudguard’s an off-the-shelf motocross part. 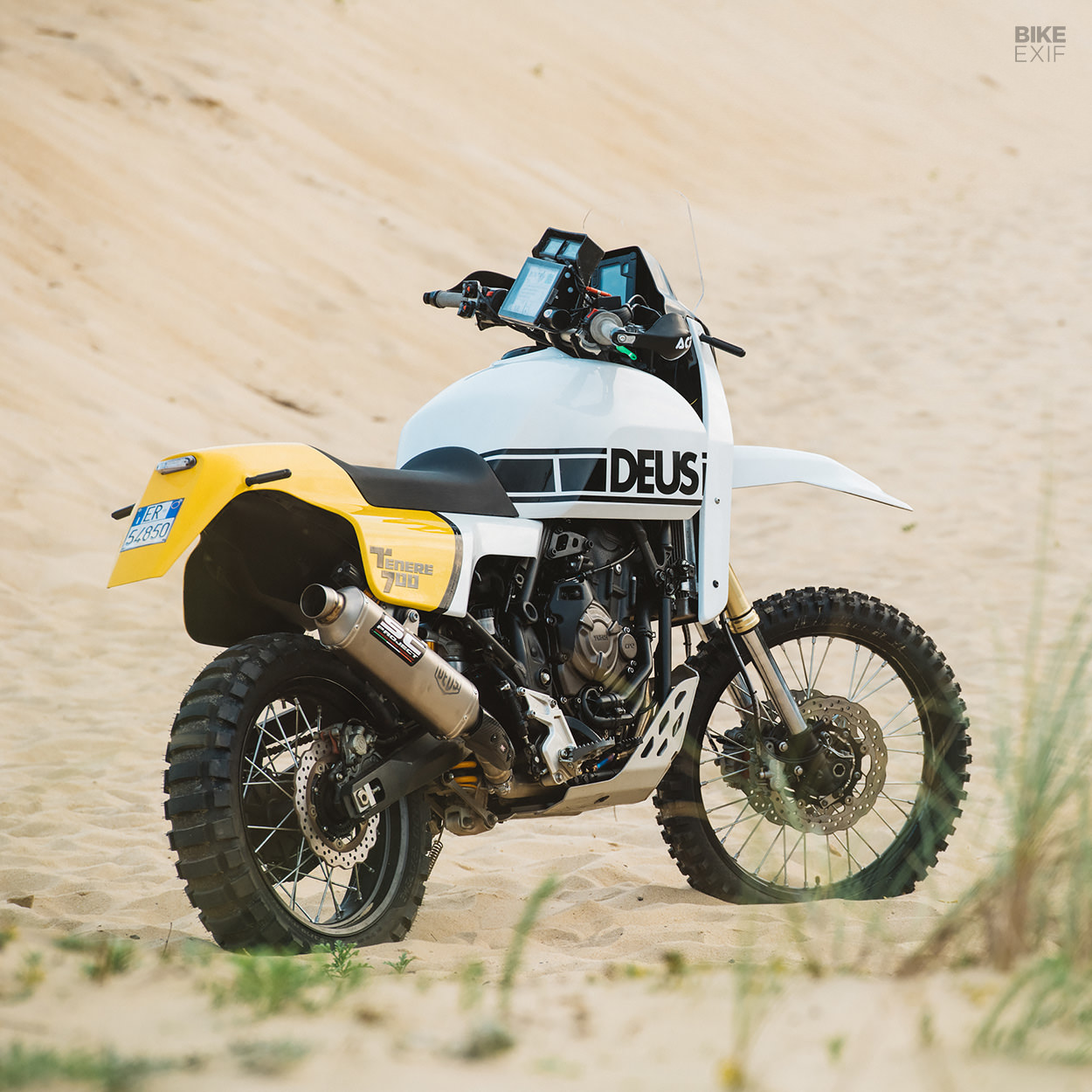 There wasn’t really any need to mess with the Ténéré’s stock running gear, but Deus Italy did anyway. Up front are Andreani forks that add 30 mm more to the ride height, with a new Öhlins shock doing duty out back.

The rest of the project was focused on carefully selecting an array of bolt-on bits. There’s an off-the-shelf road book holder up in the cockpit, along with a pair of Acerbis hand guards. The beefy sump guard is a Yamaha catalog part. 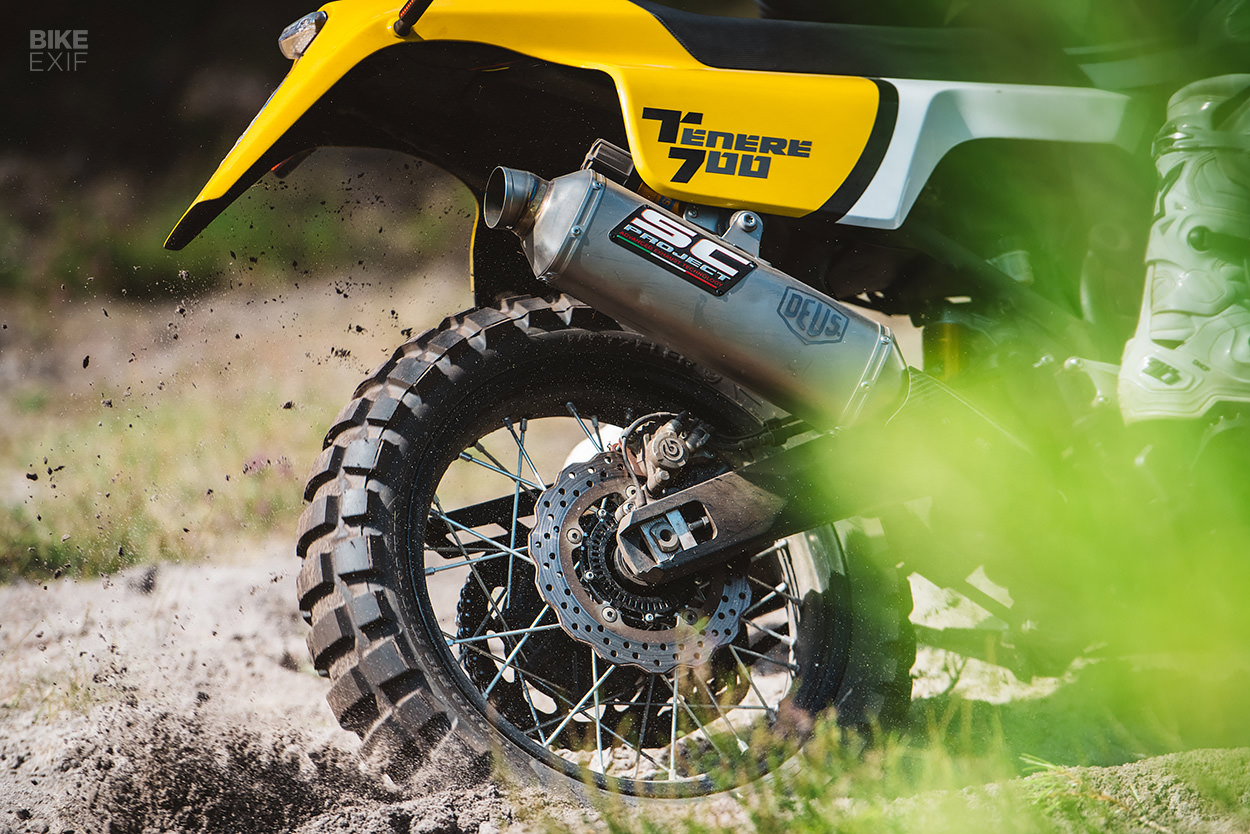 Deus turned to the specialist exhaust maker SC Project for the Yamaha’s exhaust. They came back with a custom titanium setup that’s not only as light as anything, but also sounds good.

The last add-on is a pair of aggressive Metzeler Karoo Extreme tires, fitted for the bike’s first outing: the Deus Swank Rally at Wheels & Waves. 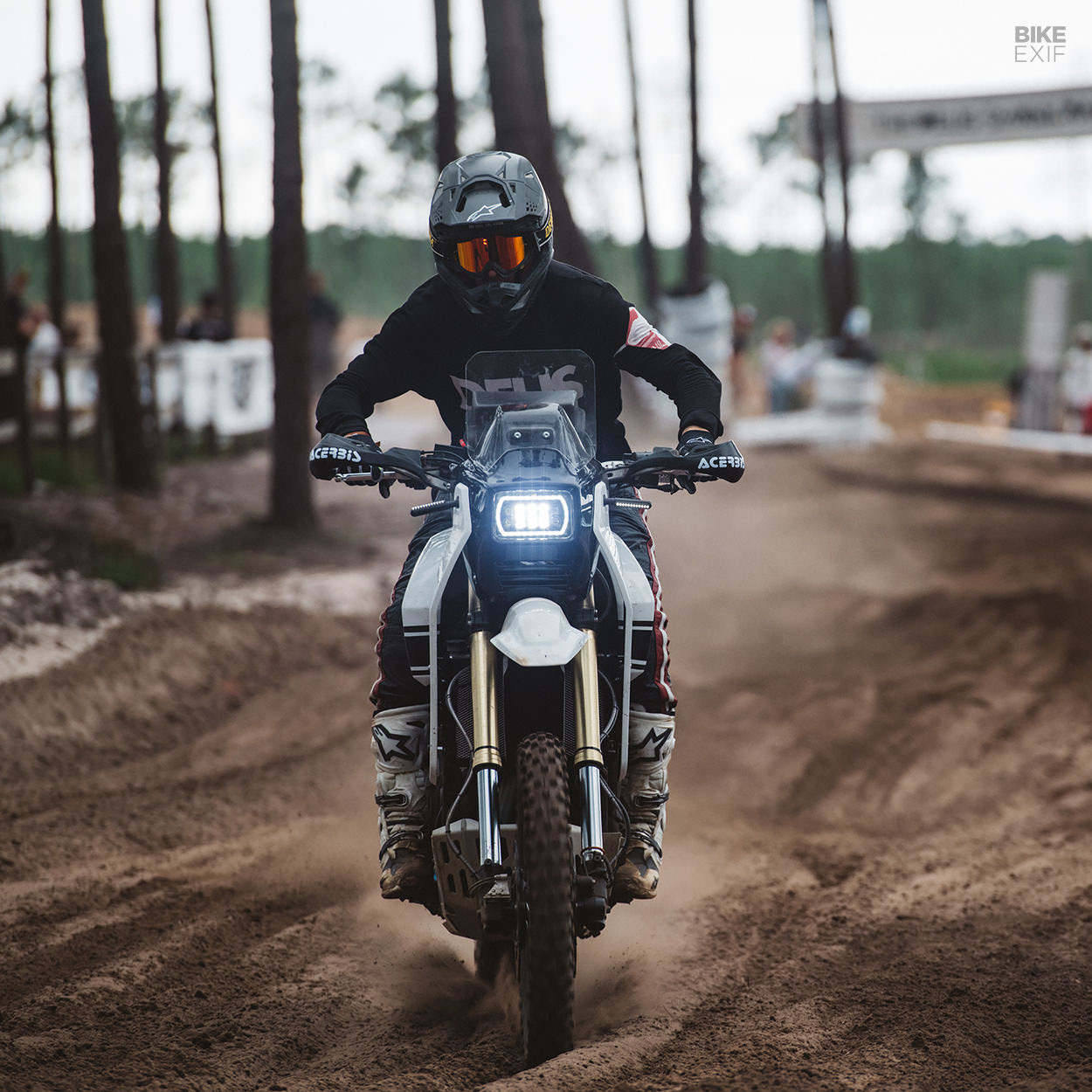 Due to COVID-19 restrictions this year’s festival was officially cancelled—but that didn’t stop four-time Rallye du Touquet winner, Jean-Claude Moussé from putting the Deus T7 through its paces.

Judging by the video, he had a ball. And who wouldn’t, on a cutting-edge ADV bike with 80s-inspired looks?