Thierry Sabine tribute: A Dommie from the Czech Republic 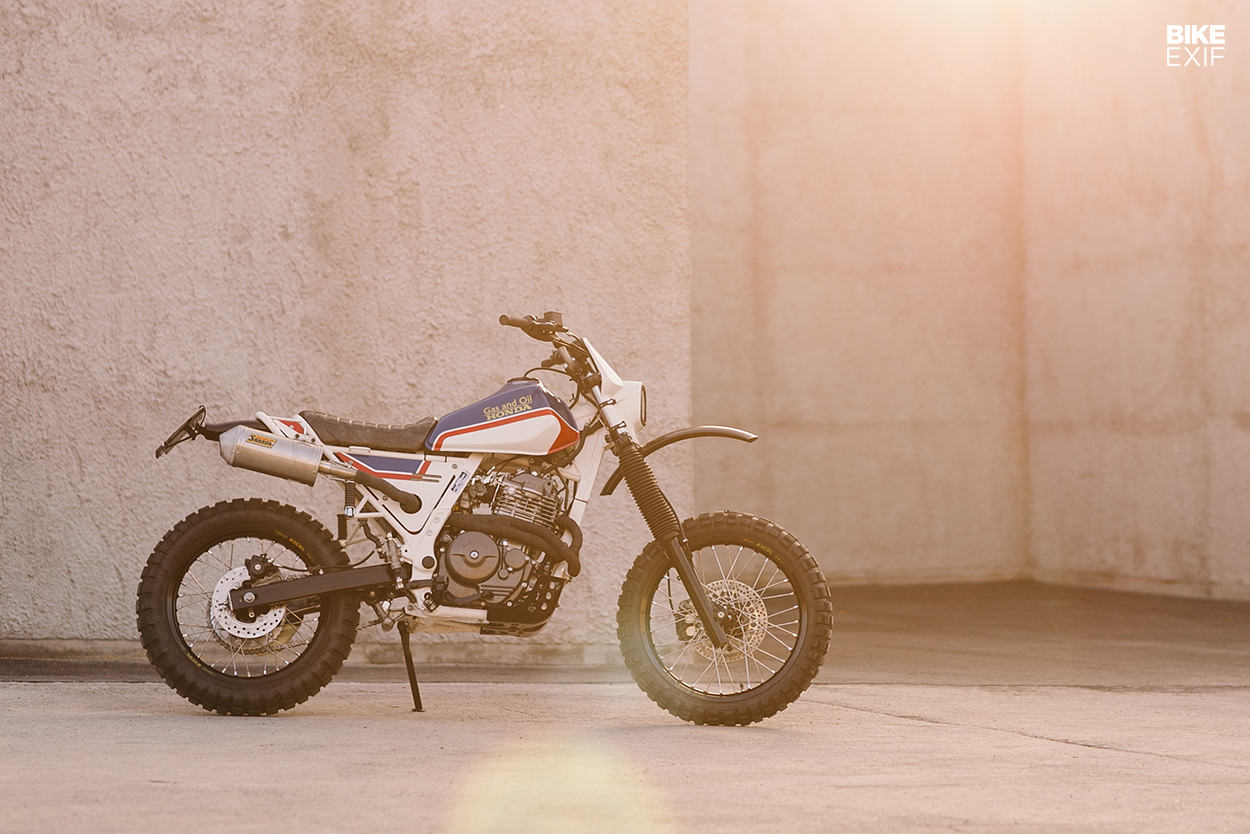 The NX650 Dominator is a staple of the European dual sport scene, even though production stopped 18 years ago. Like the Suzuki DR650, it’s one of those lightweight, bulletproof air-cooled singles that seem to go on forever.

There’s no shortage of Dominator customs out there, but this is one of the best we’ve seen lately. Even the name is great: it’s called TSM, short for ‘Thierry Sabine Motorcycle,’ in honor of the founder of the Paris Dakar rally. 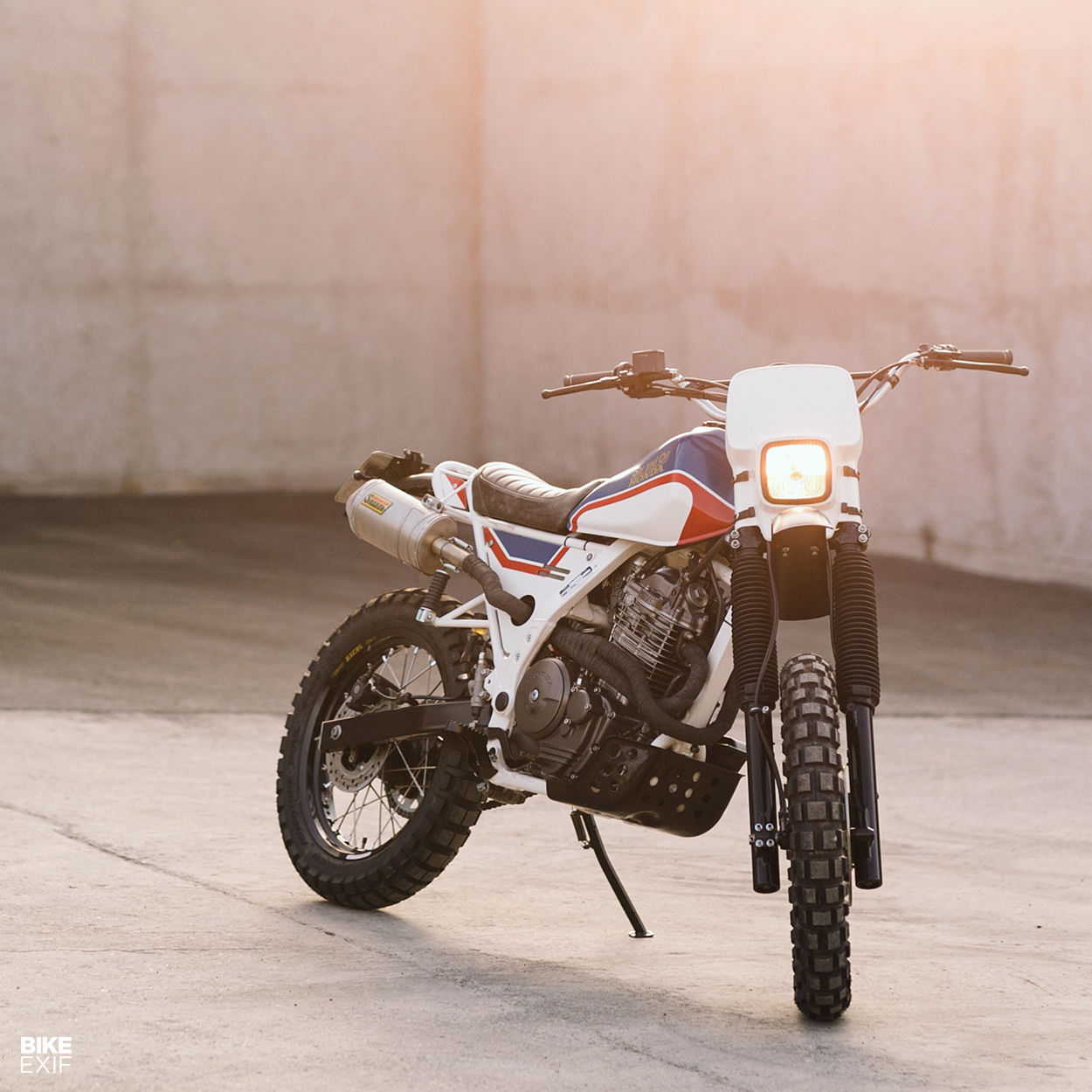 When Sabine got lost on the Tchigai Plateau in Niger in 1977, he realized it would be an excellent location for a desert race, and devoted the rest of his life to organizing the rally. He died in 1986 in a helicopter crash, but 35 years later, his legacy has been acknowledged by Prague-based Gas & Oil Bespoke Motorcycles.

“This bike was created for a client who had a 1998 NX650,” says workshop founder Matěj Sysel. “The motorcycle itself has a story to tell, since it was stolen from our client. It disappeared for about six months, and was found by the police after it had been crashed.” 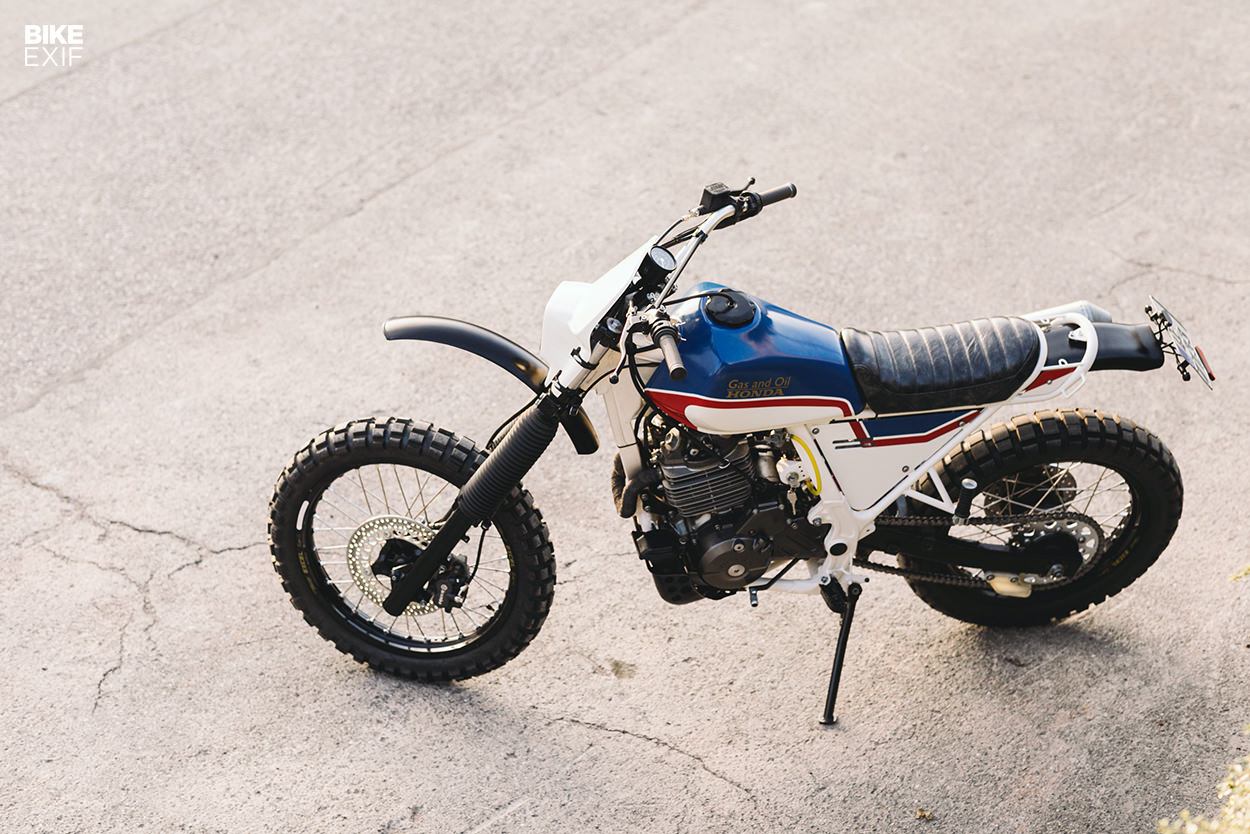 “It was in poor condition, and that could have been the end of the story—but our client decided to bring the bike to us, to resurrect it.”

Matěj decided to customize the Dommie with a nod towards race bikes, without being a hardcore copy. “The end result is subtle and lightweight, with the cool look of a racing machine,” he says. “We were inspired by motorcycles from the first Dakar seasons, and by the Honda NXR750 in Rothmans colors.” 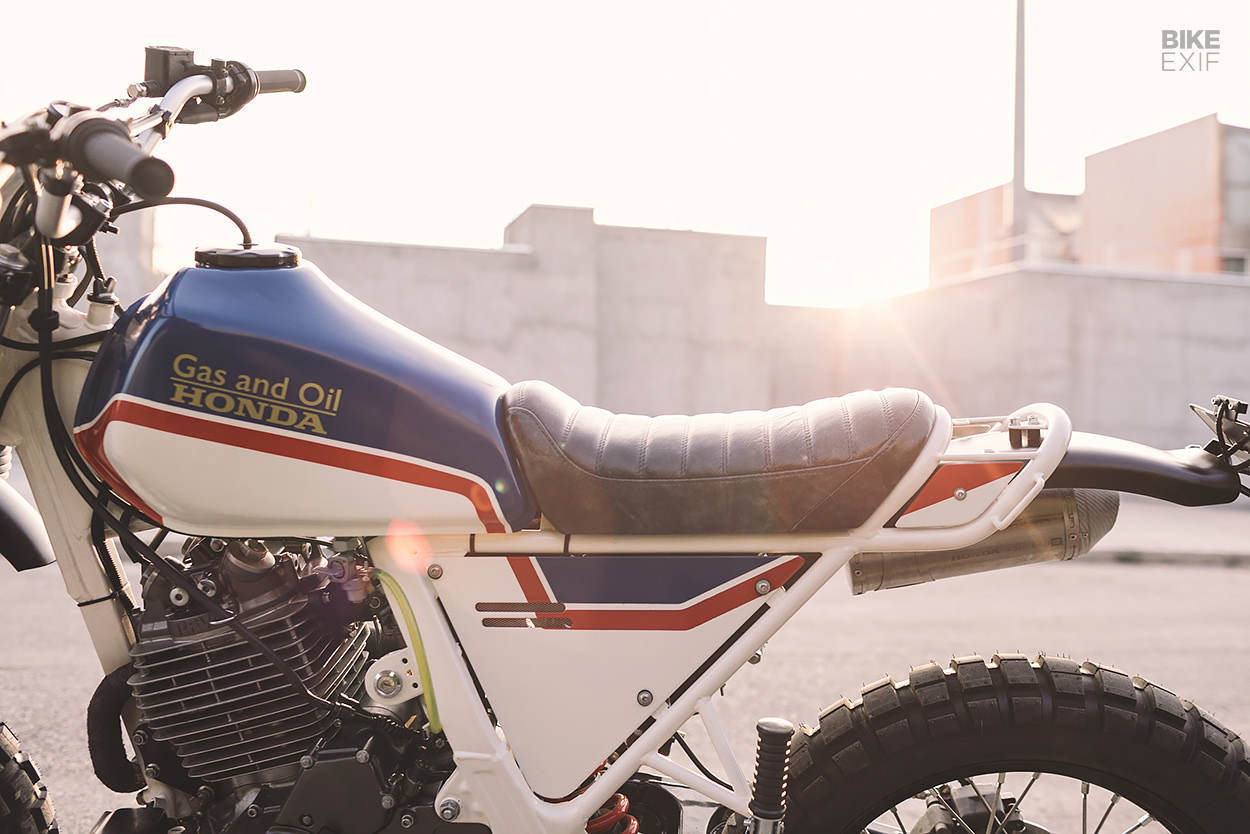 The most obvious change is the new tank, which comes from Honda’s version of the classic middleweight enduro—an XL500. The angular lines of the tank are echoed by G&O’s frame mods at the back, with a short but plush custom leather seat perched above vented blank-off plates in the frame ‘triangle’ that hide a laser-cut battery box.

The SOHC, four-valve motor has been completely refurbished to restore the original output of 45 hp, which may not sound much but works just fine for a bike that weighs well under 400 pounds wet in stock form. 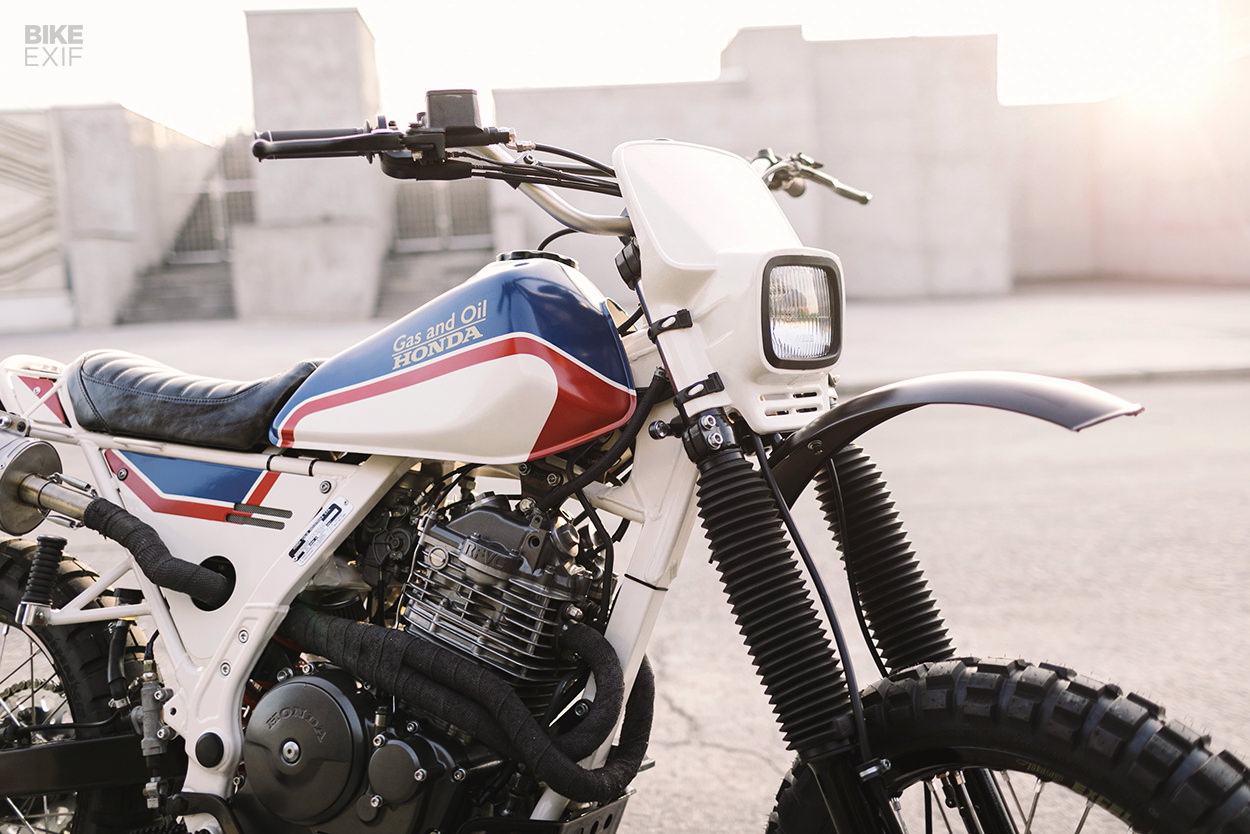 Matěj and his crew have boosted the engine a little further by fitting a foam Uni Filter air intake and a custom exhaust system, which exits out of the right-hand side cover and is terminated with a locally-made Sharon muffler.

The wheelset is slightly more road-friendly than a factory NX650, with the front rim dropping down a couple of sizes to 19 inches, and the rear going up a size to 18 inches. 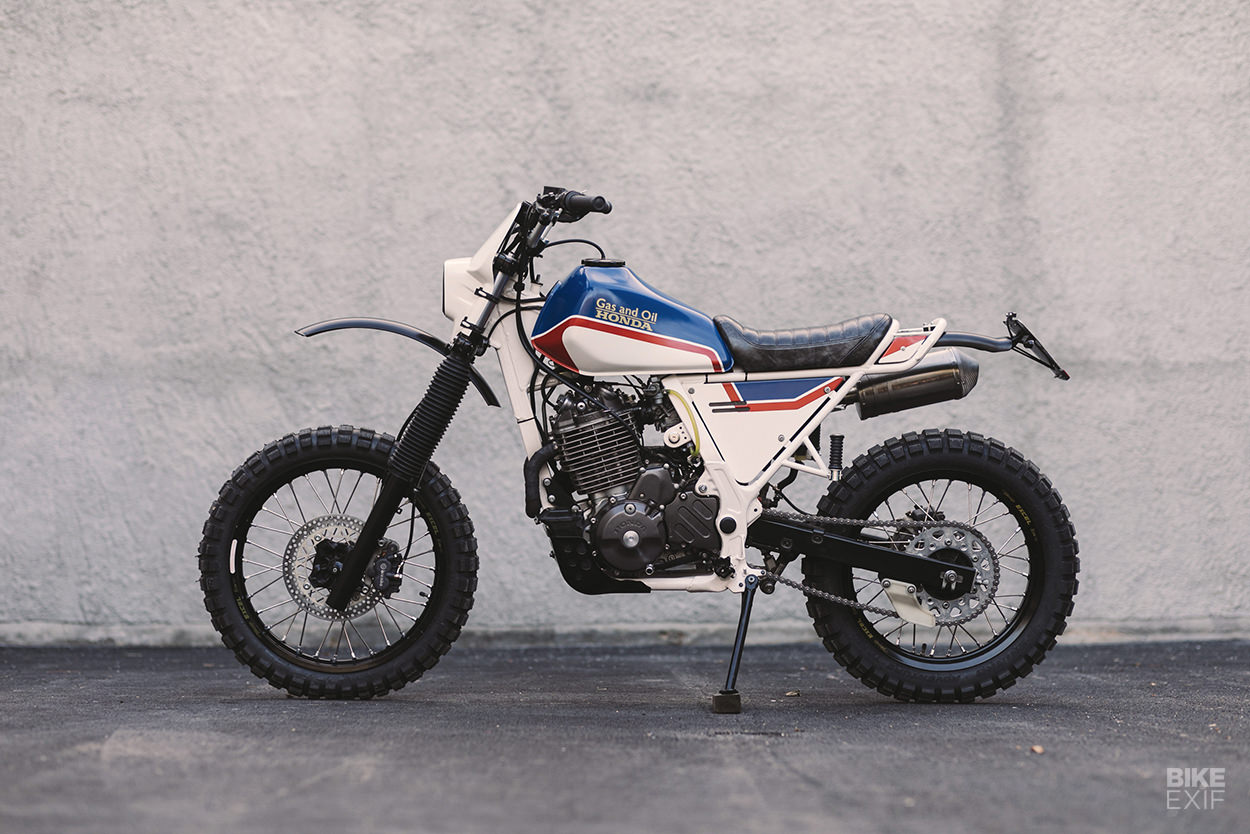 The rims are Excel, making them lighter than stock too; the rubber is Continental TKC80 at the front and Shinko Adventure Trail at the back. They’re protected by fabricated aluminum fenders, with a license plate and brake light attached to a neat little ducktail at the back.

New GOLDfren brake discs and rebuilt calipers bring the stoppers up to scratch, and a new YSS shock (30mm longer than stock) levels out the stance. 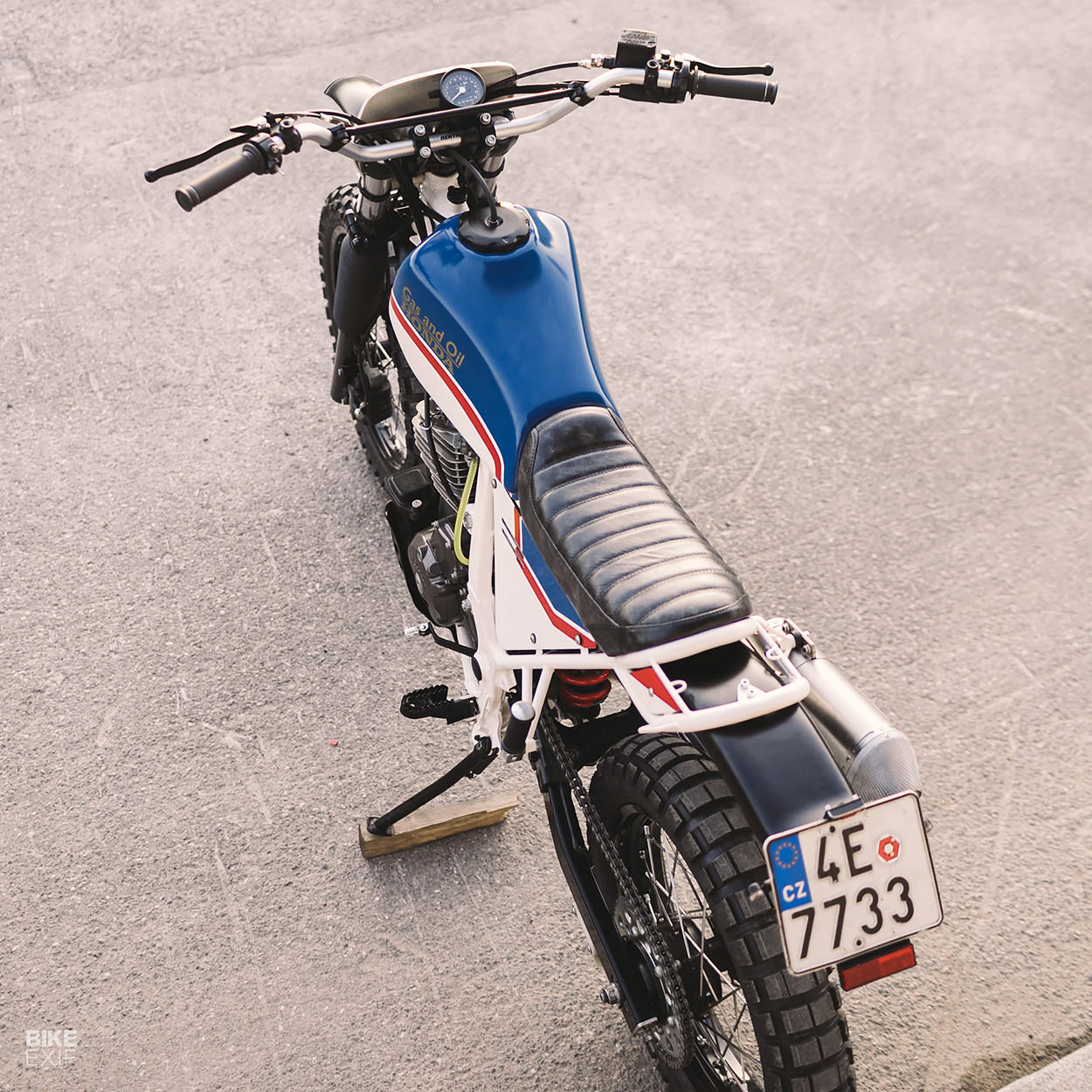 The usual Dominator cockpit is normally pretty functional, but Gas & Oil have upgraded the rider amenities with Renthal bars and grips, a simple compact speedo and new levers. There’s also new switchgear in 3D printed housings, and a classy Elba headlamp assembly from Acerbis, with a retro-styled nacelle in tough polycarbonate. 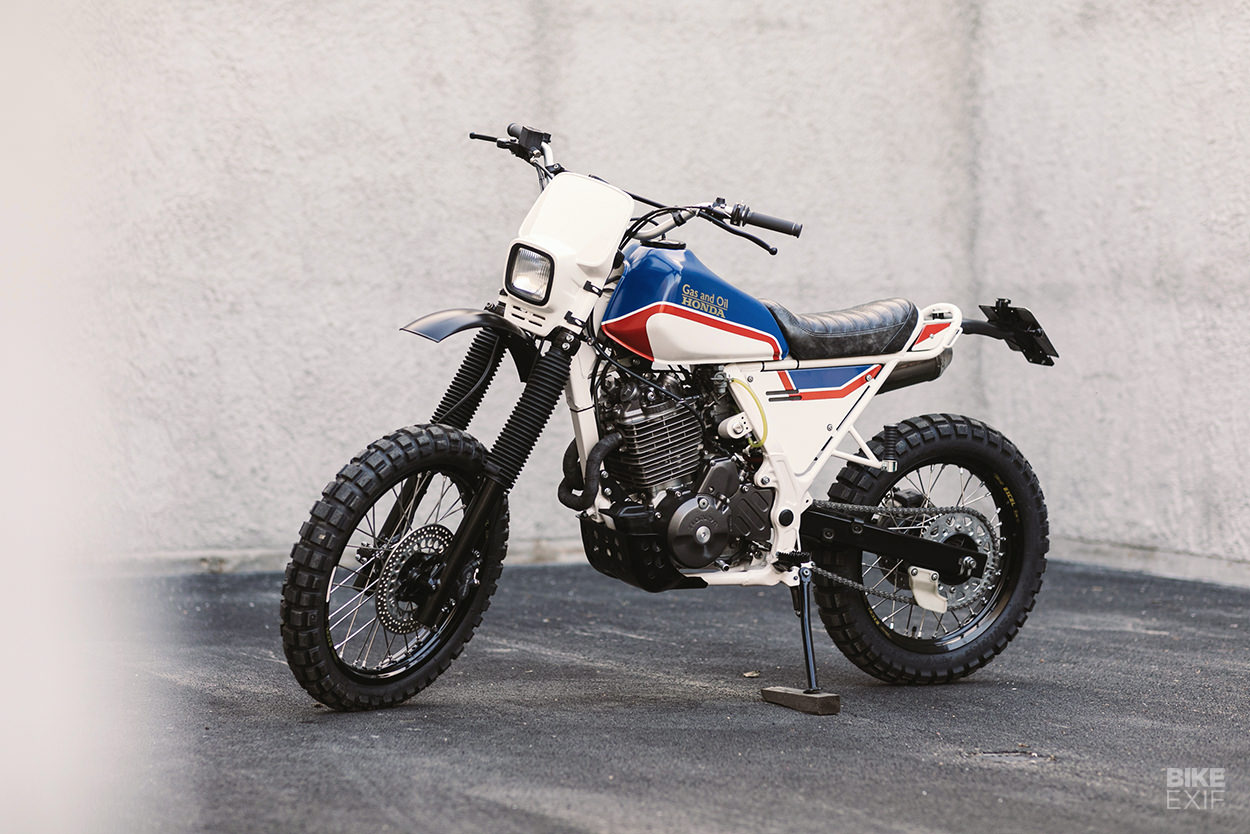 After a slight adjustment to the foot controls to suit the client, ‘TSM’ is now ready to hit the road and trails. It won’t win the Dakar rally, but as a tough, go-anywhere roundabout, it gets a trophy from us. 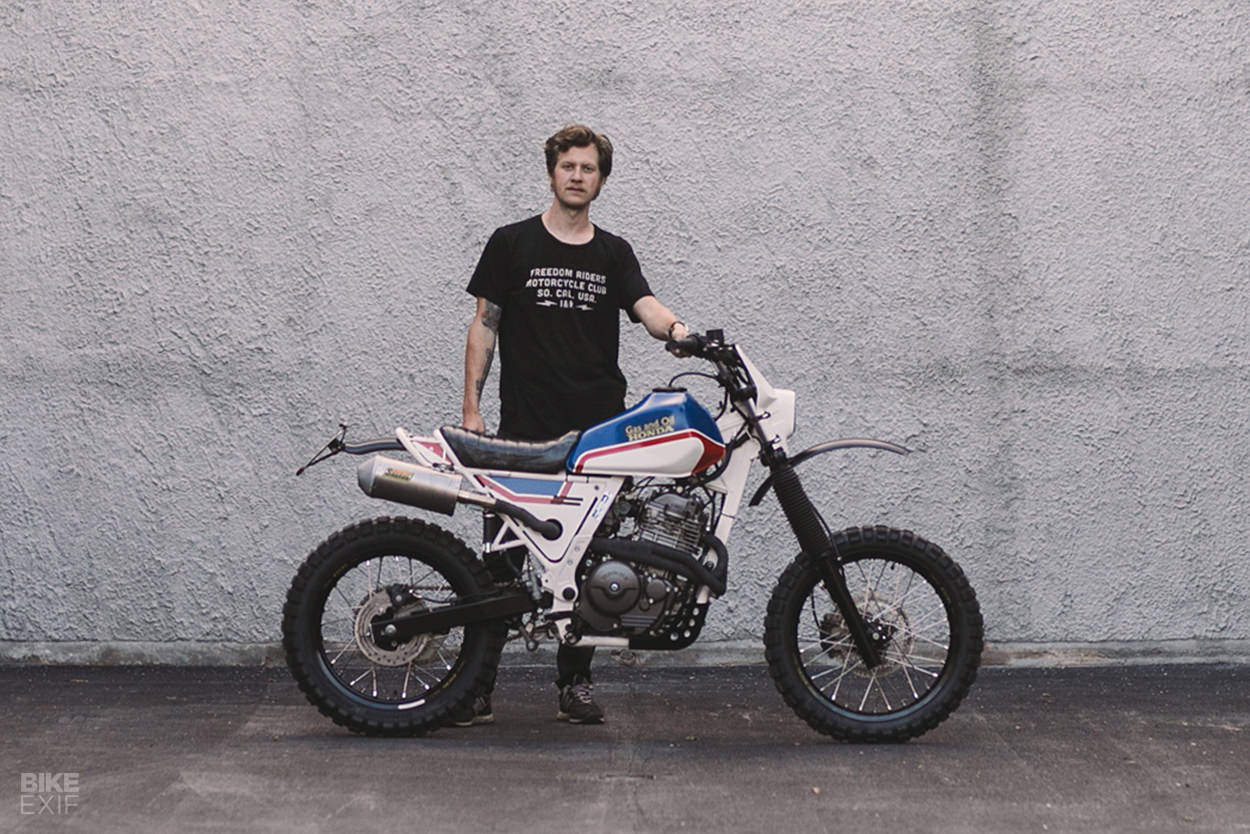