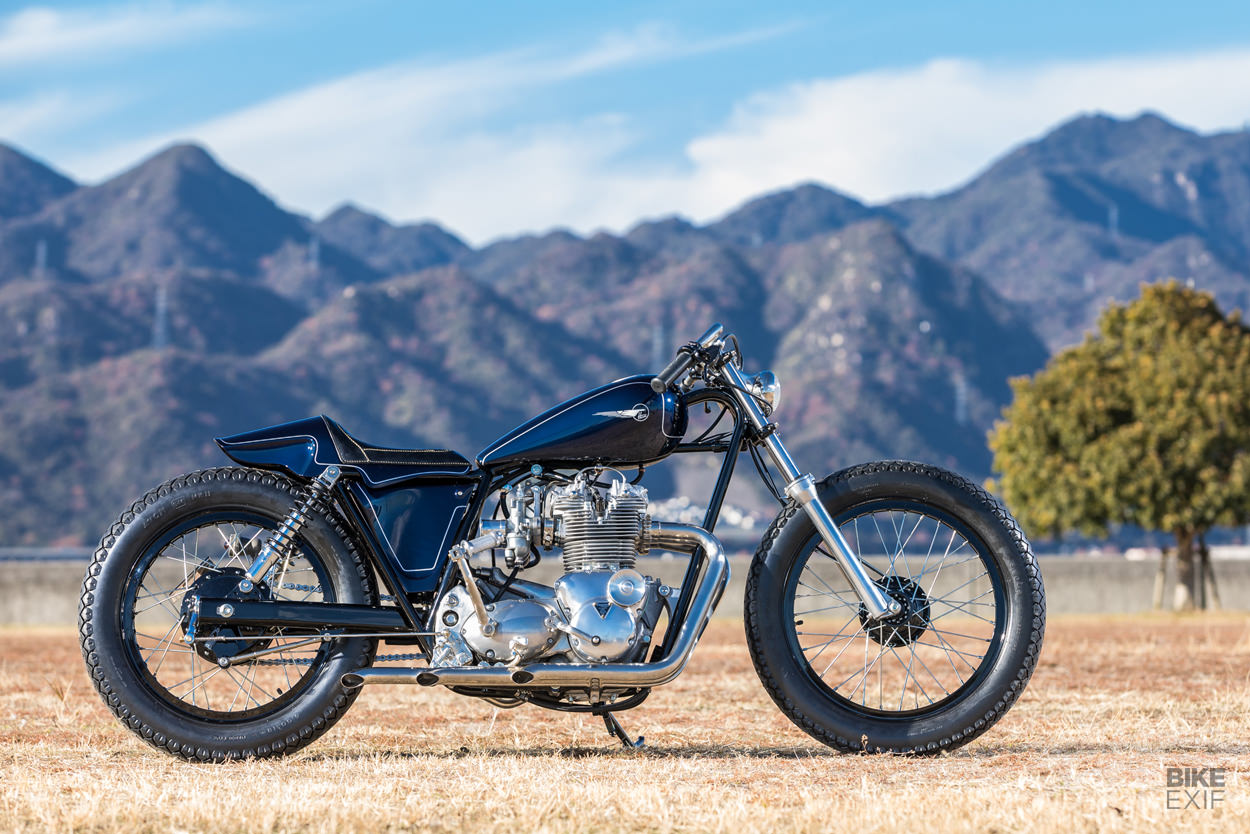 The famous Triumph Trident name is back in the news these days, with the launch of the excellent 660 roadster. The original was a highly lauded too, despite being launched shortly before the iconic Honda CB750.

The Trident T150 was quicker than its Japanese counterpart, and handled better too. It would also lap a track faster than a Norton Commando or Ducati 750 GT. But as we all know, Triumph was beset with industrial problems, and production fizzled out after seven years and a moderate run of just under 28,000 sales. 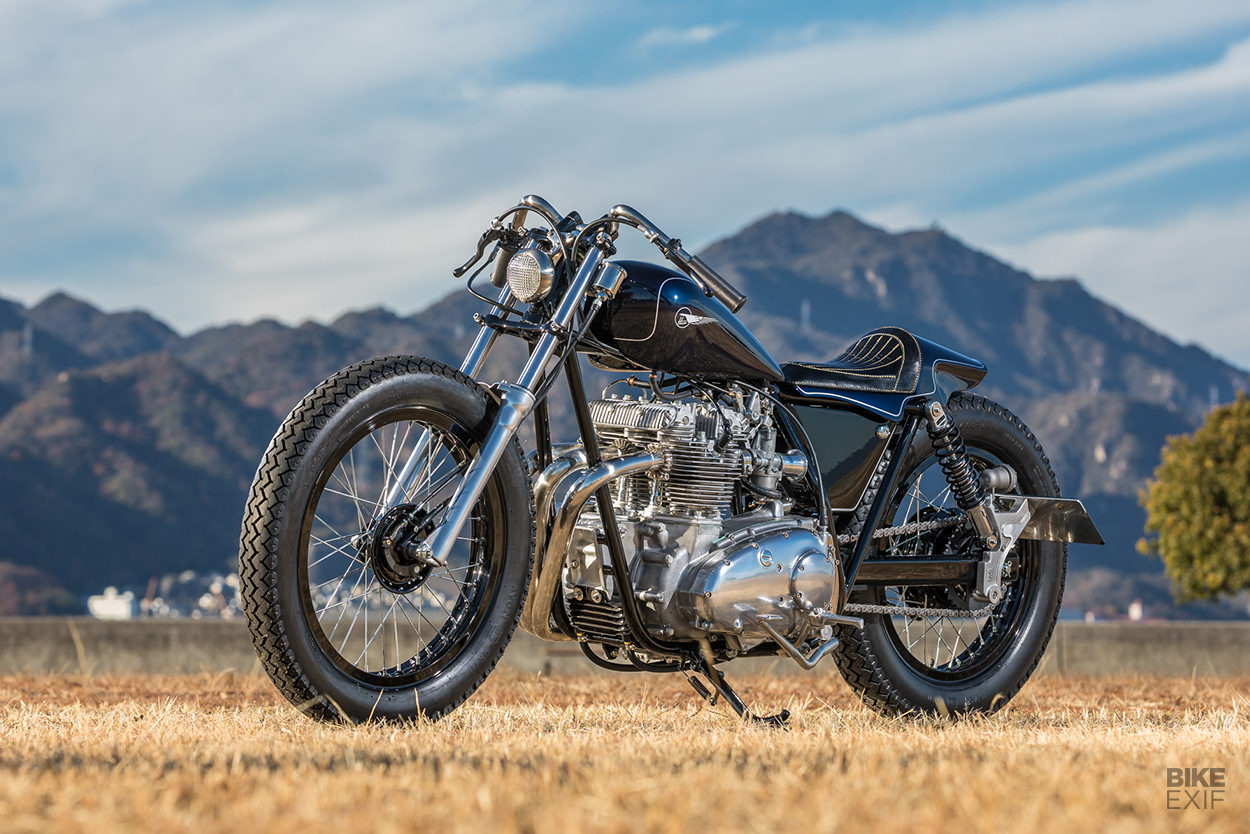 Despite the sales success, first-generation Tridents are extremely rare on the custom scene. If anyone could do the classic triple justice, it would be one of the top Japanese builders. And Kengo Kimura of Heiwa has stepped up to the mark, with this amazing ground-up build called ‘Three Arrows.’

We were surprised to learn that this is the first ‘full’ build Kimura-san has completed since 2017. That bike was also a Triumph—the 1971 TR6 called ‘Dirty Pigeon,’ which I would class as one of the finest customs to ever grace these pages. (It’s also featured in the Iron & Air x Bike EXIF issue.) 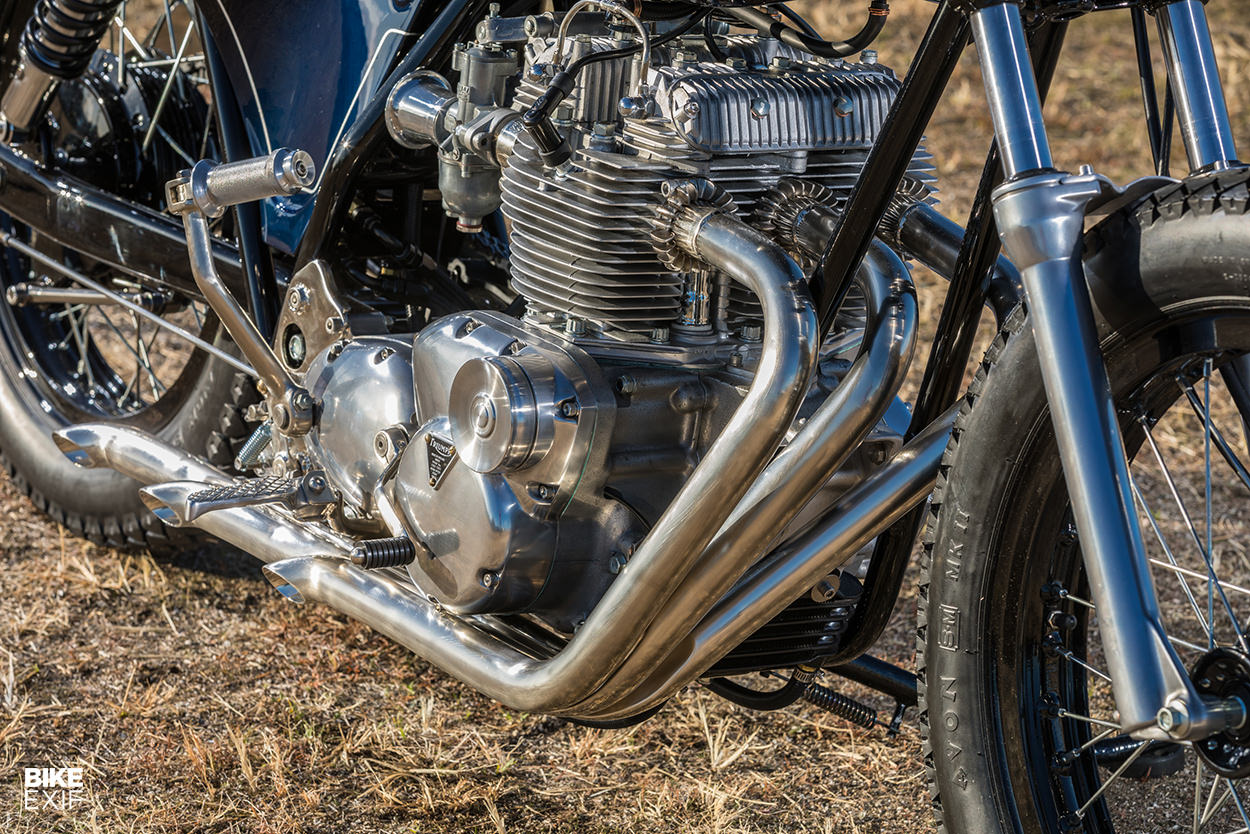 At the core of ‘Three Arrows’ is a 1973 Trident T150V engine, which Kimura located in the USA and got shipped over to Hiroshima. The air-cooled motor displaces 741cc, sucks through three Amal Concentric carbs, and was treated to a thorough overhaul. We’re betting it’s as good as it was on the day it left BSA’s Small Heath factory.

The only significant change Kimura has made to the power unit is a switch to a Boyer Bransden ignition system—for more reliable and precise timing than the stock Lucas setup. 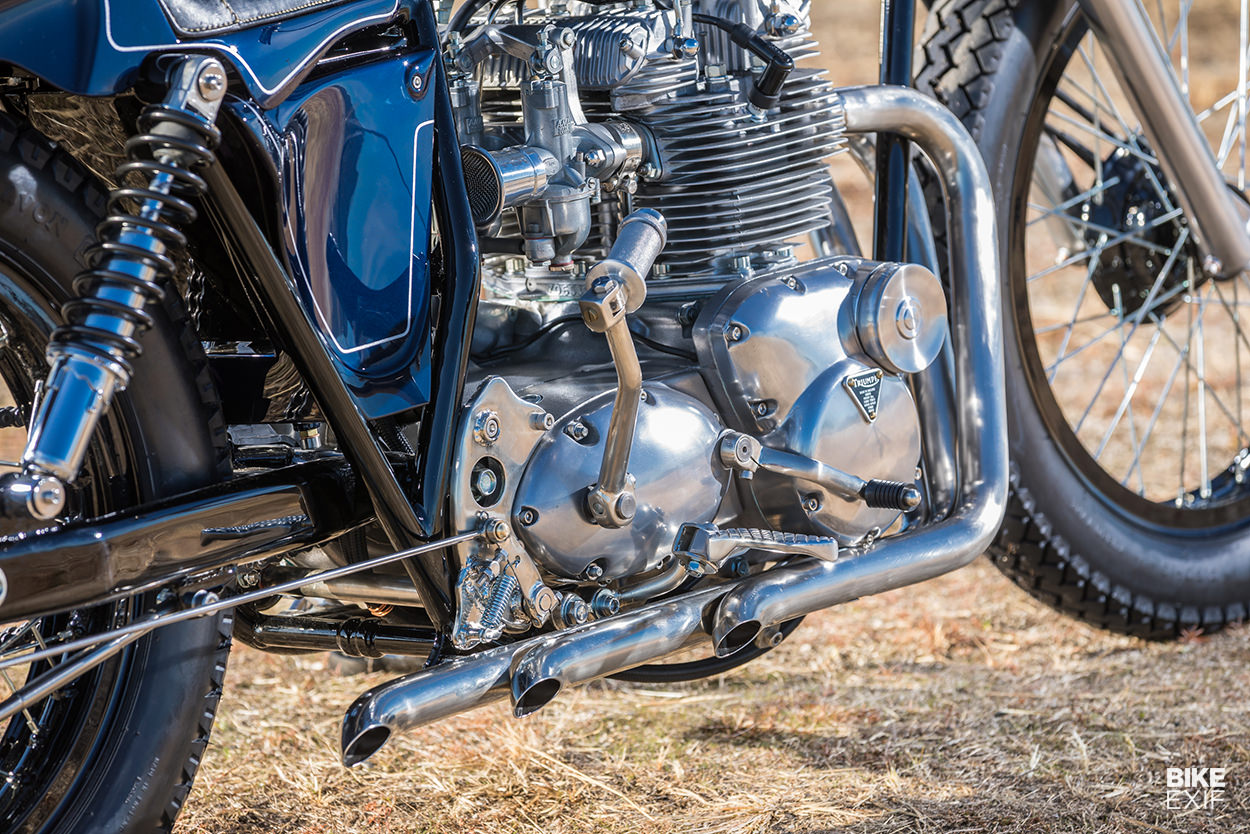 With the easy stuff out of the way, it was time to create the rest of the bike. The engine now breathes out via three individual pipes, barely longer than conventional headers. They dump the exhaust gases low down on the left side of the engine, right below the kickstart lever.

The frame tubing is handmade too: Kimura has made the entire chassis from scratch, using a classic double downtube design. 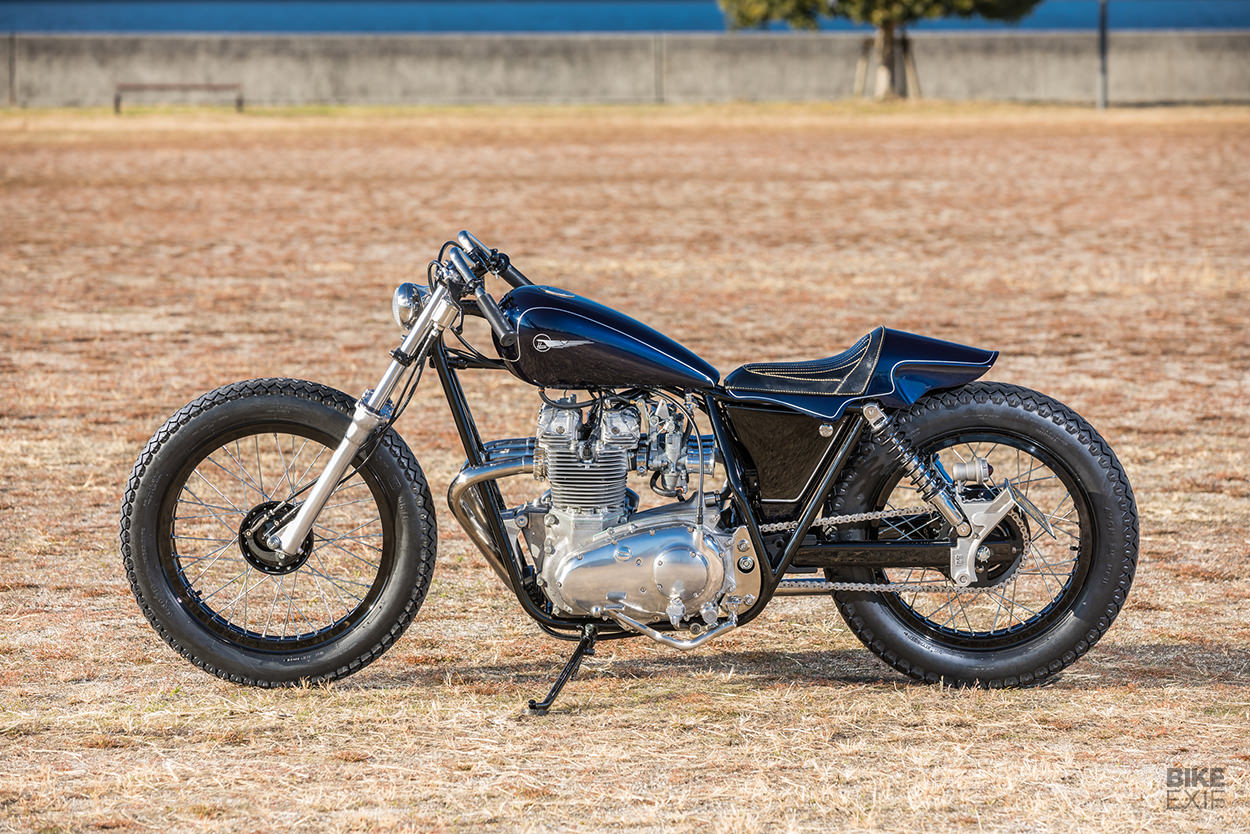 The layout is slim, to accentuate the width of the engine, and Kimura has painted the tubing black to contrast with the gleaming raw metal of the engine cases.

The forks are beefy Showa units—lifted off a Honda off road bike, Kimura tells us. (There’s a tiny curved brace hovering just above the tire.) Showa also supplied the rear twin shocks, which are hooked up to a custom-made box section swingarm. 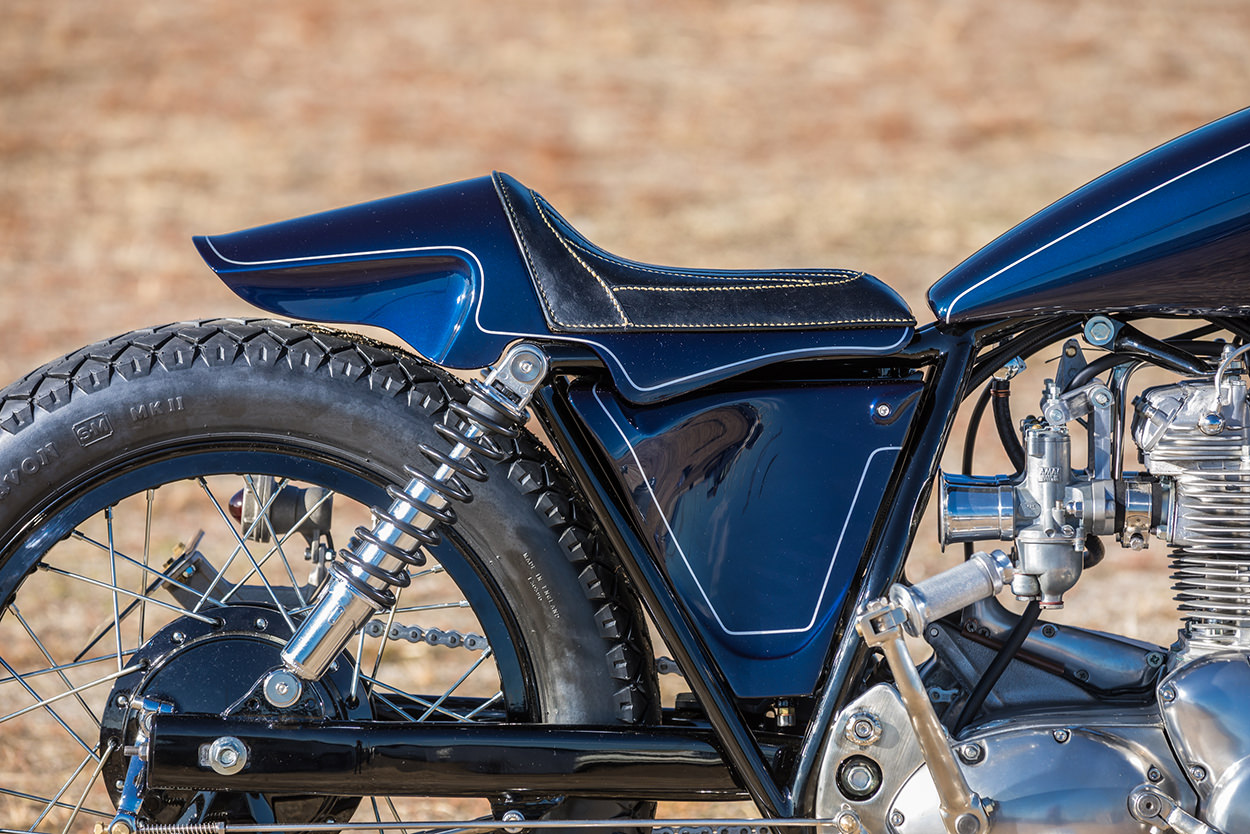 The rear drum is repurposed from a Kawasaki, and should offer considerably more stopping power than the mini drum/hub setup on the front wheel.

The wheels are classic high-shouldered Excel rims, 19 inches at the front (as on the factory T150V) and 18 at the back (going down a size). Kimura has added black paint here too, and installed a set of period-correct Avon Speedmaster MKII tires. 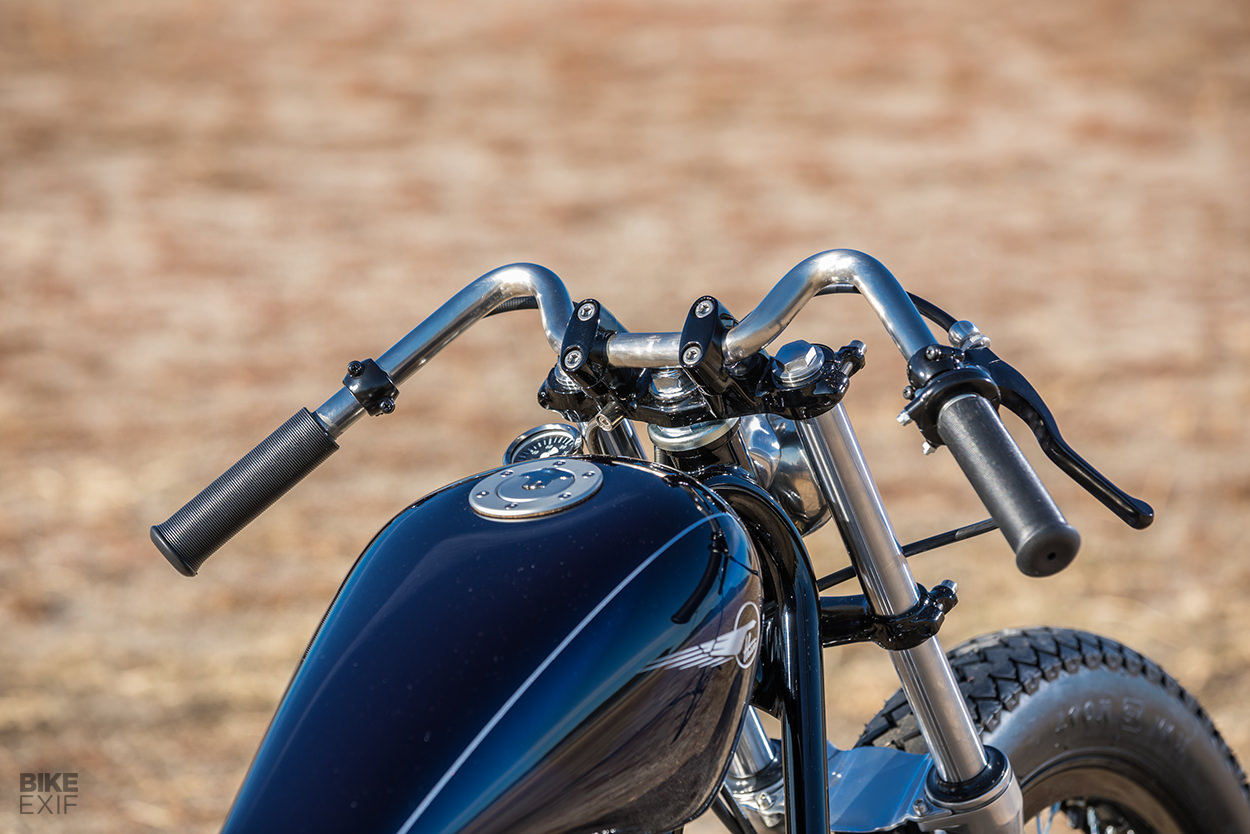 Virtually everything else is handmade, right down to the bars and triple trees. The headlight bucket is a restored vintage item, modified to use an LED bulb, and the bars are bookended with Kijima ‘Chopper Slim’ rubber grips. A mini speedo is tucked in tight against the left fork tube, keeping the bar area clean.

Kimura has always been renowned for his fabrication skills, and the metalwork on this Triumph is beautifully elegant. It’s a simple tank plus seat cowl, which doubles up as a rear fender and hides Heiwa’s proprietary taillight under the cusp. The oil tank sits beneath the seat, with a custom oil system plumbed in. 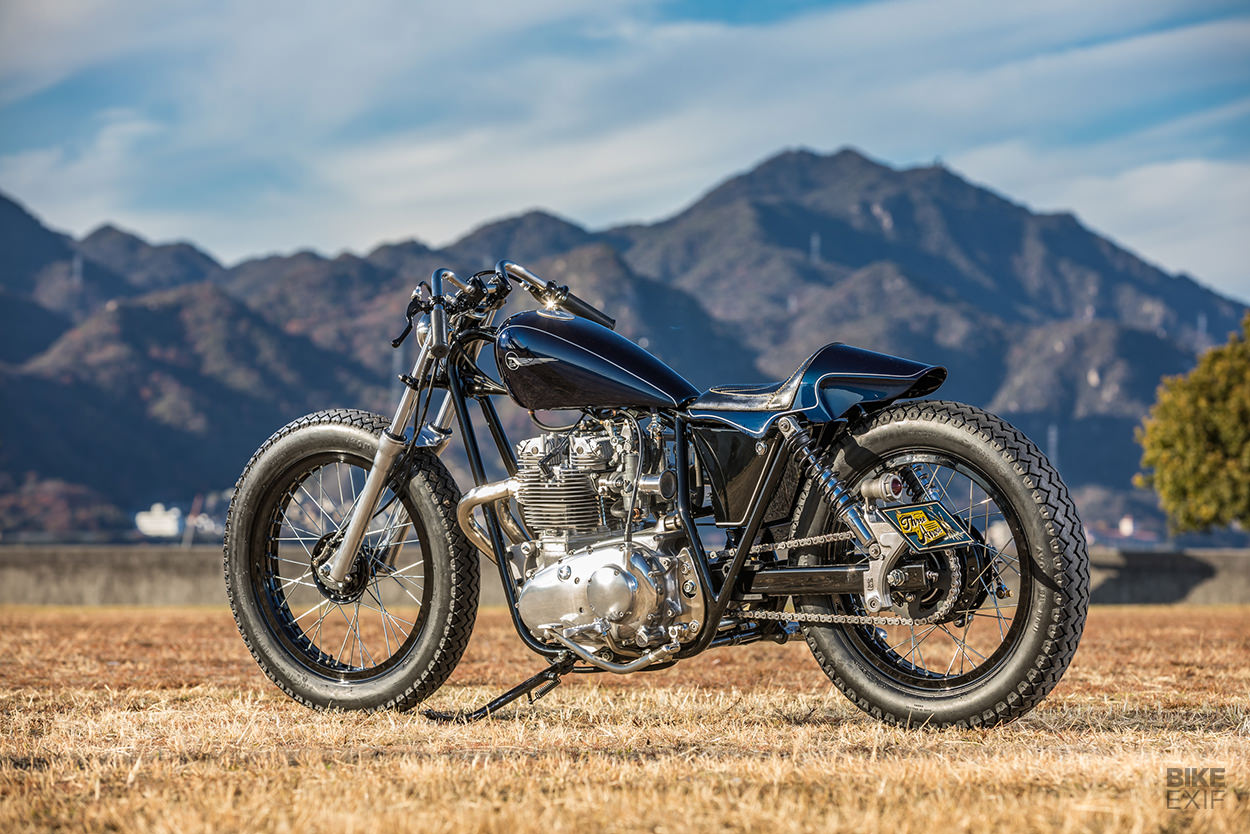 The immaculately stitched black leather upholstery was handled by fellow Hiroshima workshop Flavor Leather Works, and the paint is the work of another company down the road, N2AUTO.

Kimura has chosen a dark navy blue candy finish, which changes color slightly according to the light. Subtle silver pinstriping accentuates the lines of the hand-hammered metal. 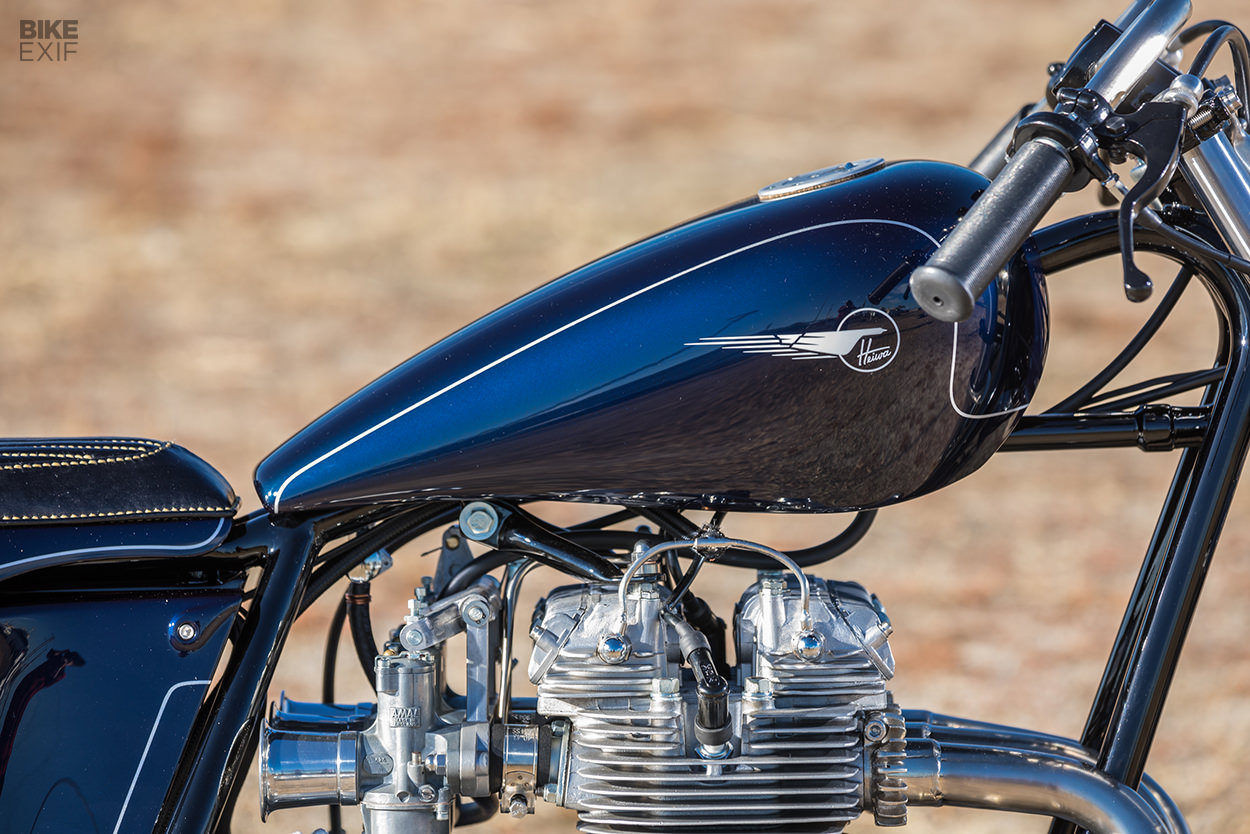 ‘Three Arrows’ had its first public outing a few days ago at the legendary Mooneyes show in Yokohama. And anyone who has visited those halls will know how high the standards are, and how intense the competition for trophies is.

We’re not surprised, though, that Kimura won the ‘Best European Motorcycle’ award. We’re just hoping he doesn’t wait another four years before tackling his next ground-up build. 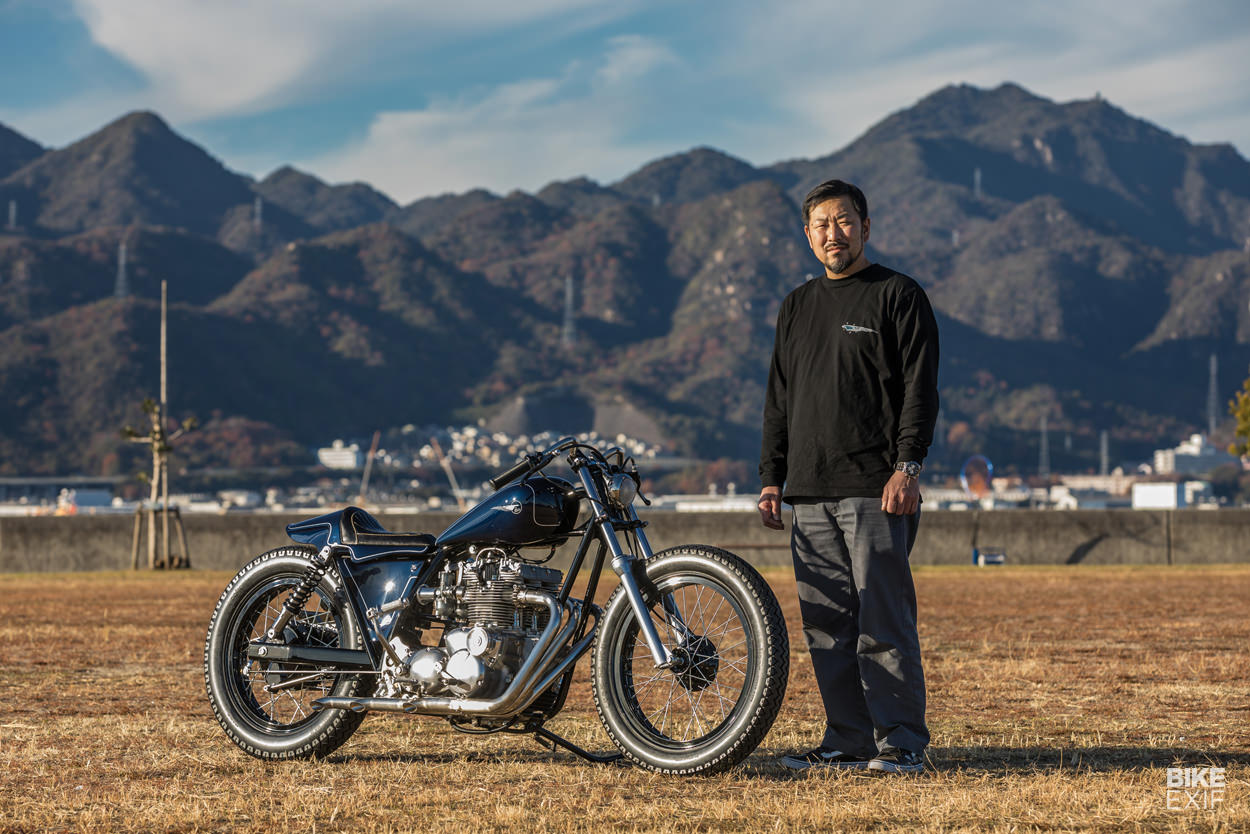