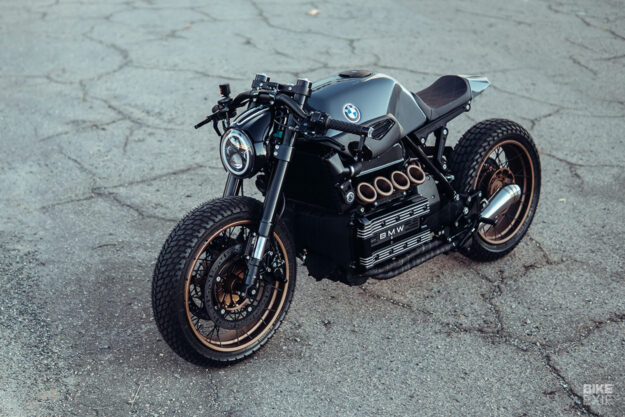 When a workshop focuses very tightly on one model of bike, it’s usually a good thing. They get to know what to modify, and what to leave alone. And where to get the biggest bang for the buck.

That’s the philosophy of the Brazilian shop Retrorides by Lourenço. Founded by brothers Gustavo and Rodrigo Lourenço and their father José, they’ve carved out a niche building very sharp BMW K series café racers—like this dark and handsome K100 RS. 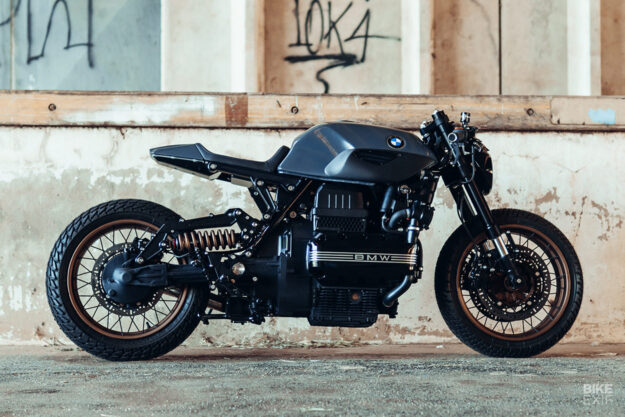 The Lourenços are based in a town a couple of hours away from the huge city of São Paulo. Their company is known throughout Brazil for its slick work on cars and trucks, as well as BMW motorcycles.

It’s obvious where the passion lies, though. “I’ve always been obsessed with the K series,” Gustavo confesses. “The engines of these bikes fascinate me. I’ve done countless projects with them, but this time I wanted to do something different.” 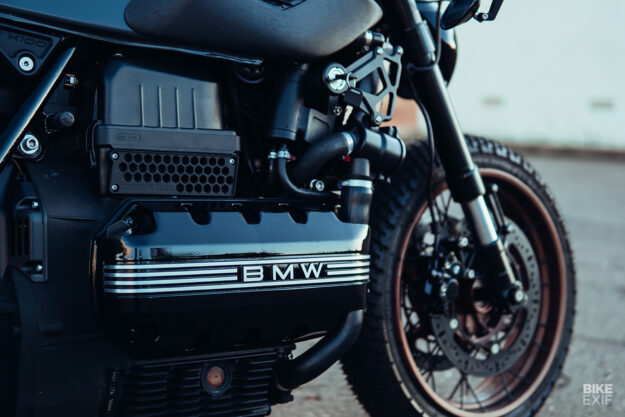 Sadly, José passed away in December—but he would be very pleased to see the work his sons have done on this build. Retrorides have always focused on improving the lines of a bike, and that’s exactly what happened with this project.

They’ve taken inspiration from the more basic 1980s models of the K series, which were ‘naked’ roadsters, but made a critical change to the trickiest part of the styling—the fuel tank. 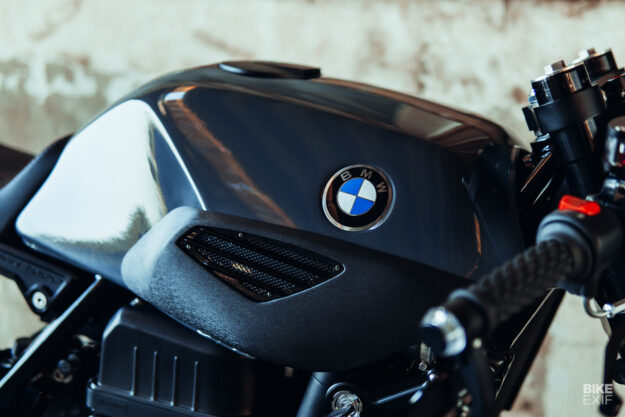 The original tank had a distorted bottom line, designed to accommodate the radiator. It looks reasonable when all the OEM bodywork is in place, but as soon as you remove anything, it resembles an isolated jigsaw piece.

“The ‘naked’ K100 had a small ‘radiator protector’ next to the gas tank,” says Gustavo, “so we started the project from this part. The most difficult task was to transform this piece into something to be admired, in the café racer style.” 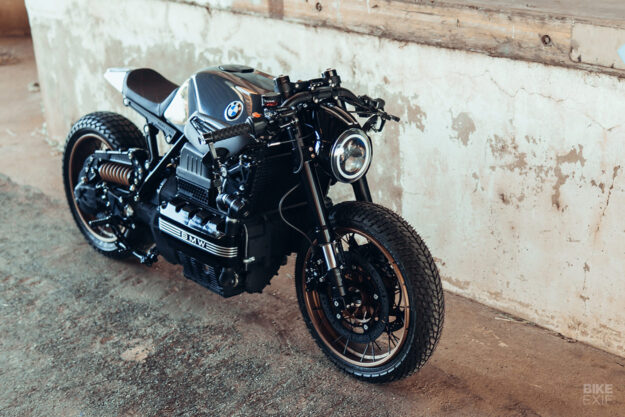 After hours of design and several discarded models, Retrorides hit on the solution: a flush-fitting panel with a grill that complements the other lines of the tank.

After modeling the part in 3D, Retrorides manufactured it on their 3D printer using carbon fiber, with the grille machined out of billet aluminum. It’s one of the neatest solutions we’ve seen, and instantly transforms the looks of the K series. 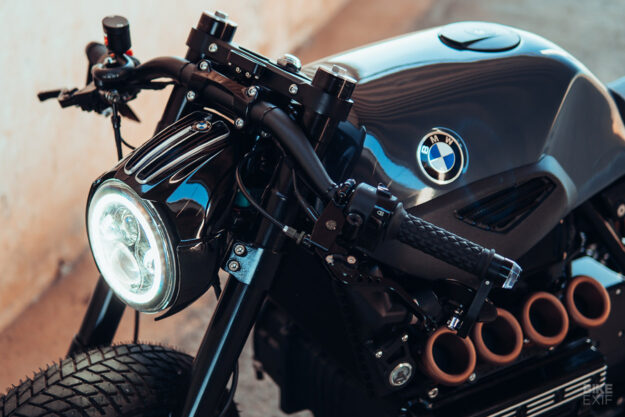 There’s more stylish problem-solving to be found ahead of the bars, with a new fairing that wraps around a circular headlight. This is another piece of 3D design and printing, and incorporates the iconic kidney grille from BMW cars. This grille is also CNC machined out of aluminum.

The restyle is completed with the new tail unit, which sits on a truncated subframe. The creases mimic the contours of the gas cap, and there’s a built-in LED taillight. To keep things even cleaner, Retrorides have flushed in the rear turn signals as well, which are made from clear acrylic. It’s yet more attention to detail that gives this K100 a smooth and appealing visual flow. 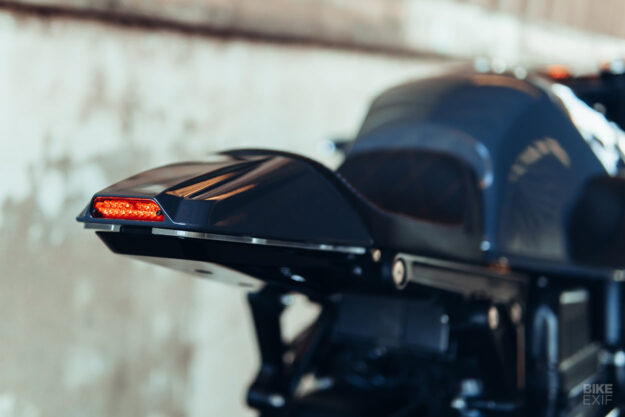 “At this point, the design was basically done,” says Gustavo. “So it was time to start on the mechanical parts and details.”

Stance is critical, so the crew began with the wheels. They took a pair of 17-inch rims, finished them off in bronze, and adjusted the offset of the rear wheel to align it with the frame. The tires chosen were Heidenau K73s, an exceptionally grippy compound originally designed for supermotos. 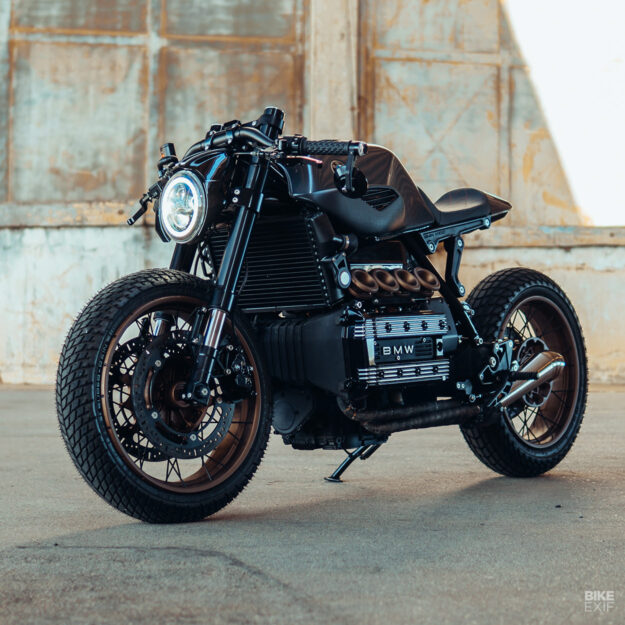 New brake rotors were CNC manufactured, and there are new four-piston calipers at the front. They’re attached to USD forks from a Honda 599/Hornet, which are grafted on using new upper and lower triple trees made from CNC machined aluminum.

“With the handlebars, we decided to do something different,” says Gustavo. “We inverted the bars across the top of the headlight nacelle.” The result is good: there’s none of the empty space you’d get with clip-ons. 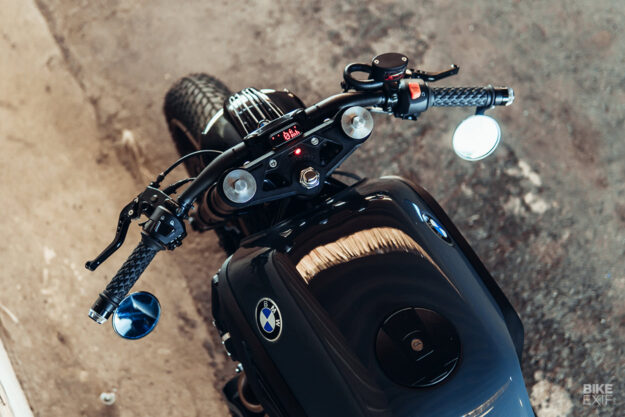 CNC’d aluminum mirrors and discreet Motogadget turn signals bookend the handlebars, and Retrorides also made a mount for a Motogadget Motoscope Mini speedo.

Much heavier work is evident at the back end, notably a new subframe machined from aluminum. Following the lines of the fuel tank, it’s anodized in black. It also hides a compact lithium battery and supports the new seat pad, which is upholstered in black leather with diamond-shaped seams. 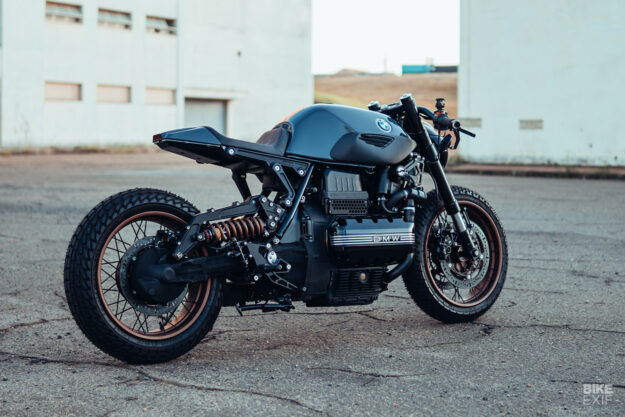 Underneath is a new horizontal rear suspension setup, designed and sold by Retrorides and well known in the custom K series scene. Designed for monolever bikes and machined from a solid block of aluminum, it also ‘opens up’ the back end visually.

The engine required little work: with around 90 hp on tap, it’s got plenty enough grunt. A new stainless steel exhaust system frees up the breathing though, and Retrorides have machined up four eye-catching velocity stacks on the intake side. 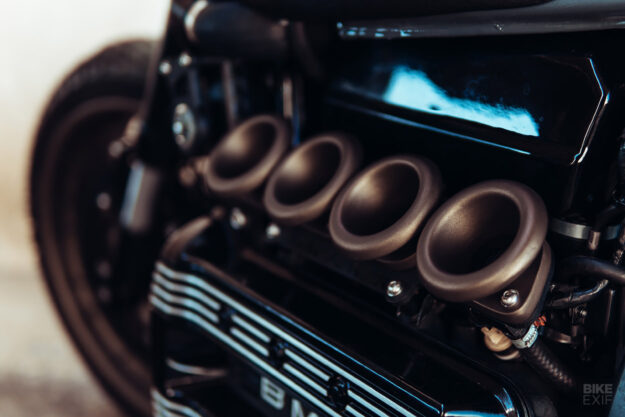 Subtle grey BMW paint for the bodywork contrasts with the black finishes elsewhere, with extra pop coming from the bronze color of the wheels and intakes.

It all hangs together just beautifully, and that makes it one of the best K-series customs we’ve seen yet. Gustavo and Rodrigo have done their father proud. 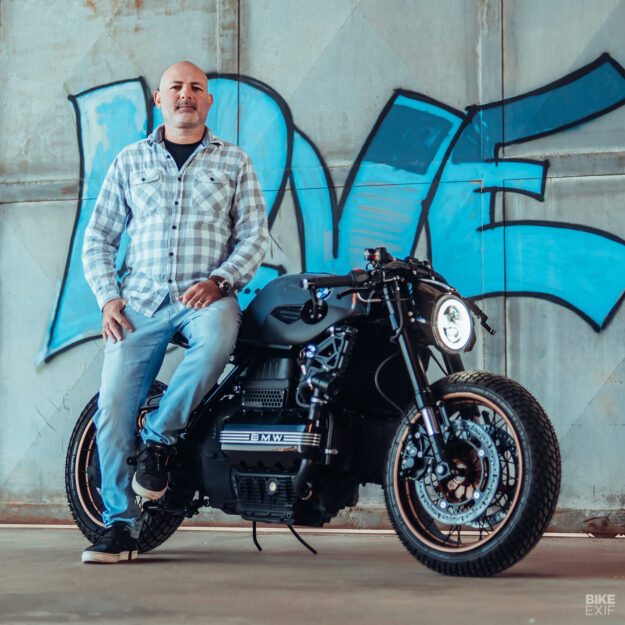