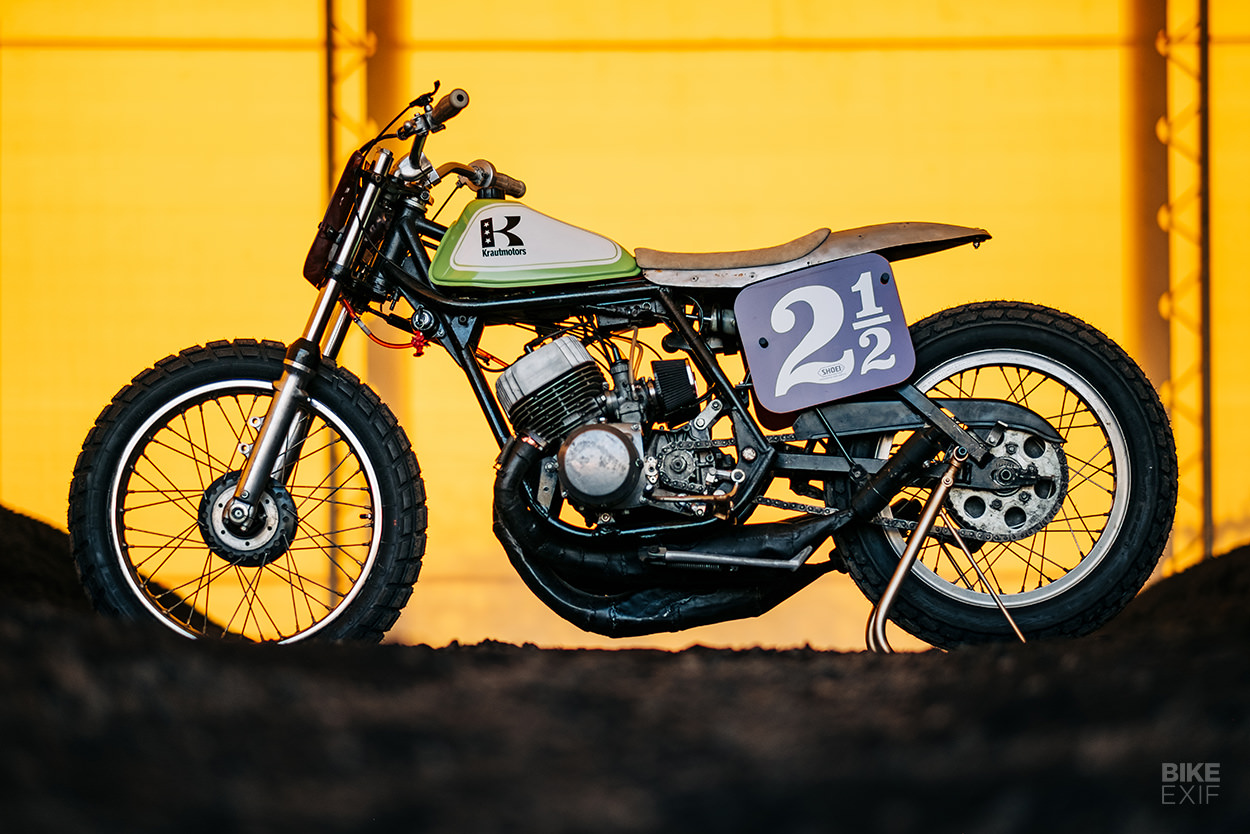 The mythical Kawasaki H1 Mach III needs little introduction. The triple-cylinder 500 cc two-stroke made a splash when it hit the market in 1969, with an unforgiving power band earning it the infamous ‘widowmaker’ nickname. There are faster bikes out there these days, but a classic H1 is still a good candidate for a rapid restomod or cafe racer build—if you can get your hands on one.

But here’s something you don’t see every day: an H1-based flat tracker, pieced together almost entirely from leftover parts. Dubbed the ‘Räng Däng Däng Sweet Bum Bäng,’ this scrappy wonder was lovingly built by Rolf Reick—the man behind the Krautmotors name. 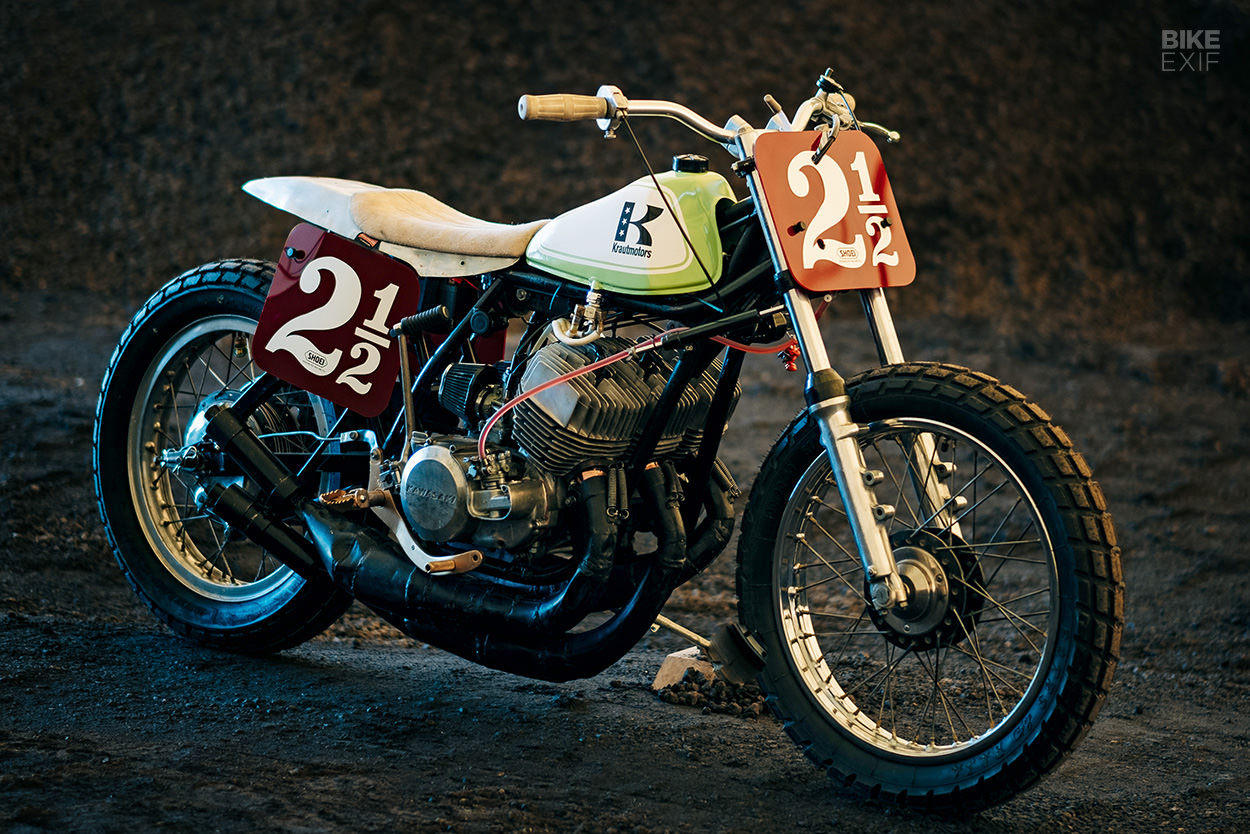 Based in the university town of Heidelberg in Germany, Rolf’s an industrial designer, and heads up a design school in the neighboring town of Mannheim. He’s also been building and racing bikes for the longest time, so he’s amassed a workshop full of parts.

Most of Rolf’s race bikes have been designed to compete in the European Sultans of Sprint series, and the StarrWars spring races at the Glemseck 101 festival. But he’s been itching to build a flat tracker for a while. So he pieced this one together from bits and pieces from previous builds, dating way back… 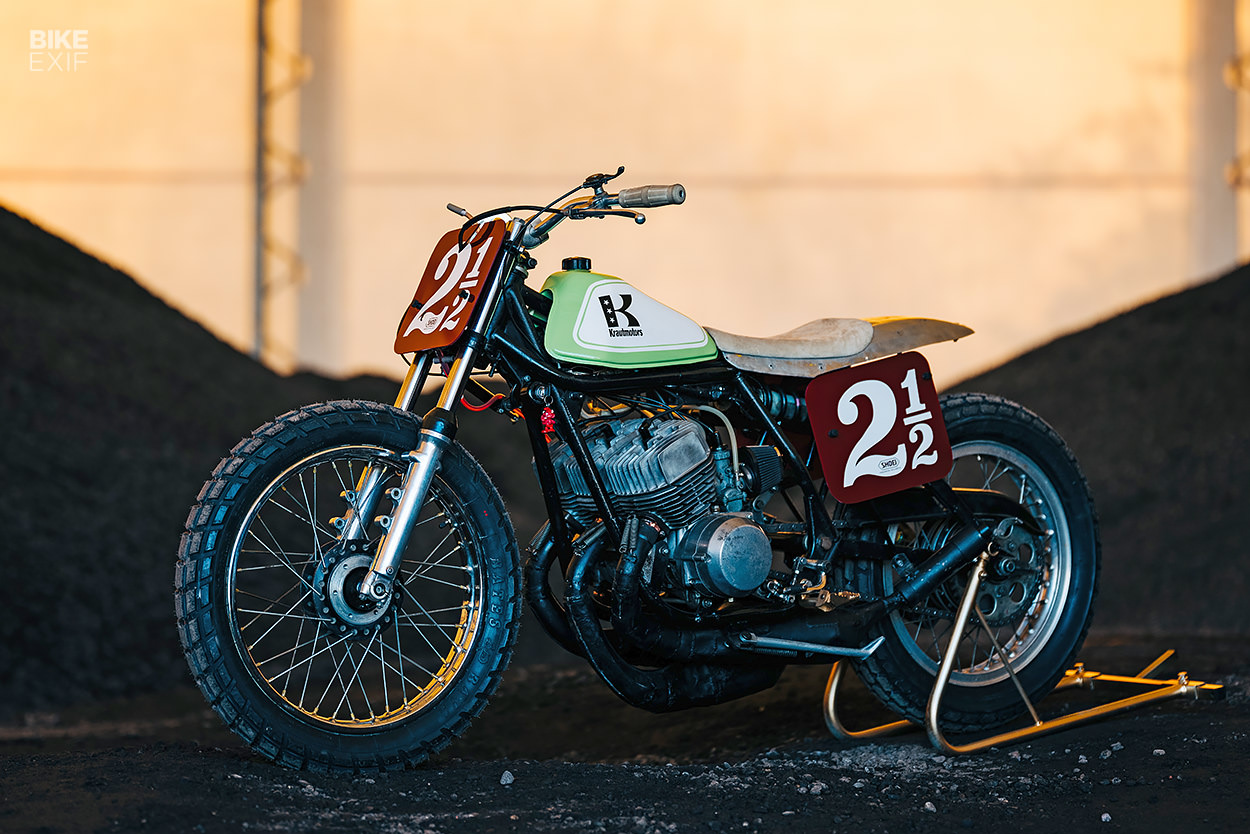 “I started Kawasaki rebuilds in the 90s,” he tells us, “and bought up a lot of parts when they were cheap.”

At the heart of the beast is a 60 hp H1 motor that Rolf previously used for sprint racing. He dropped it in as-is, but tasked two-stroke guru Ralf Gille with rebuilding the clutch and ignition, and rewiring the bike. Ralf has been building Rolf’s race engines for years, and is also his source for vintage Kawasaki two-stroke parts. 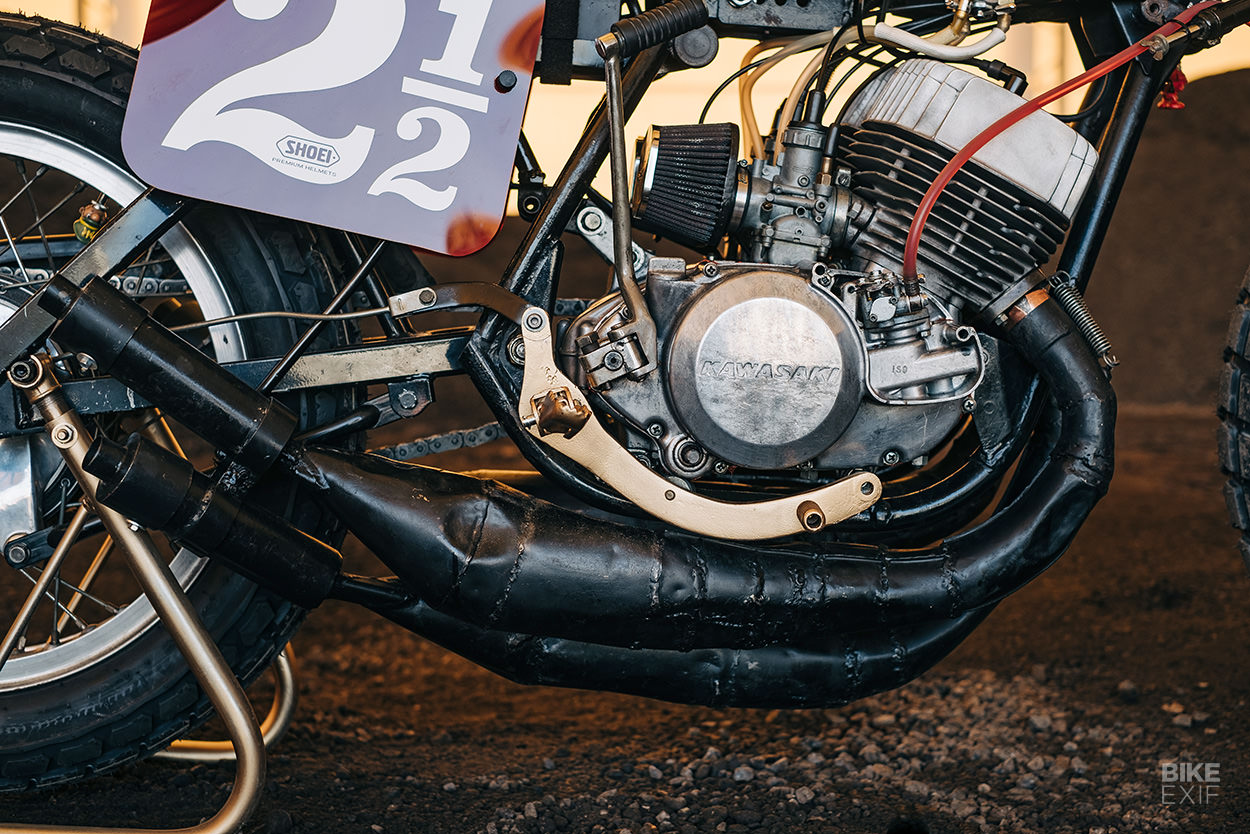 The motor wasn’t cracked open for two reasons: it already runs fine, and Ralf doesn’t plan to leave it in the frame for too long. Herr Gille is already working on a 750 cc mill that’ll make 100+ horsepower.

Current upgrades include a set of K&N filters, and an old, beat-up exhaust system. “I welded that one together myself from old motocross exhausts in the 90s,” says Ralf. “You can tell by the horrible seams.” 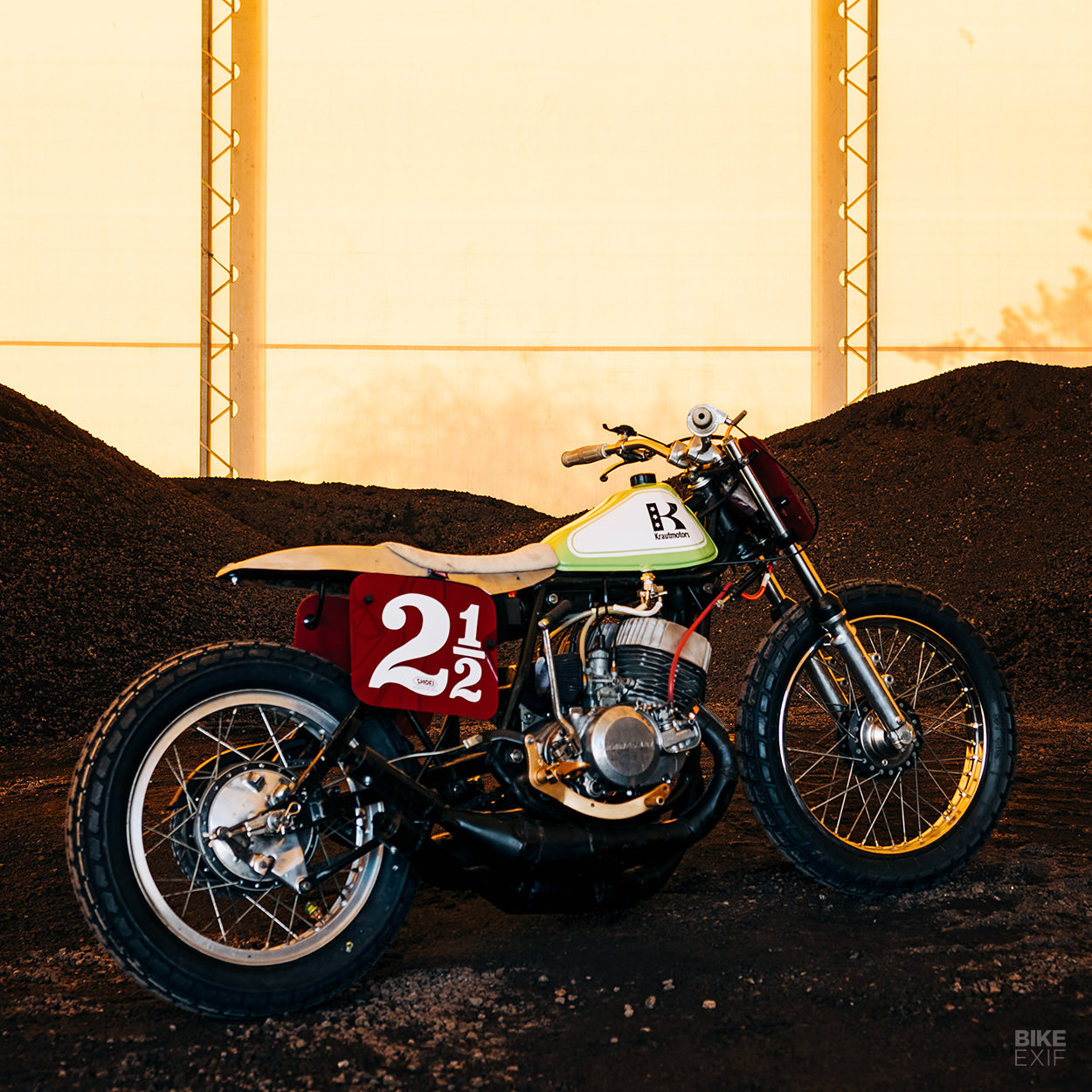 The chassis is yet another repurposed part. It’s a 1969 H1 frame that Rolf customized back in the day to run with a Yamaha mono-shock swingarm, and even got TÜV certification for. There’s a shock hiding away under the seat, but in the past, this particular frame has also been used in a rigid format for sprint racing.

At the front, Ralf has an original H1 wheel set up to run brakeless, and there’s a 19” high shoulder rim laced to a drum hub at the back. The tires are a Bates Baja (front) and a Dunlop K180 (rear). 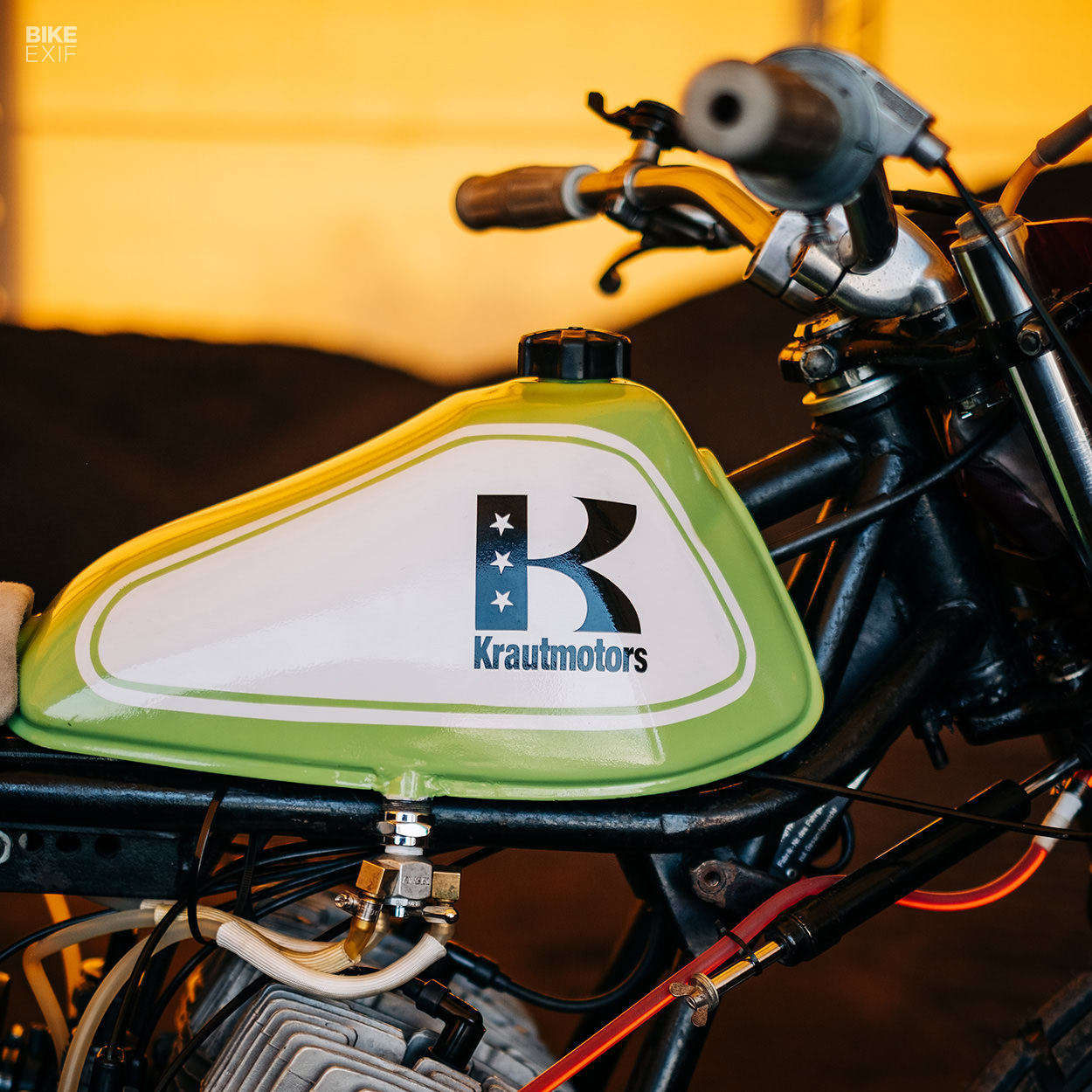 The bodywork is all pick-‘n’-mix, but fits together beautifully. The fuel tank’s from a vintage Kawasaki enduro; Rolf tweaked it to fit, then welded in a bung for a Pingel Power-Flo fuel tap. He handled the paint himself too—a classic Kawasaki white-and-green affair with a cheeky Krautmotors logo.

The aluminum tail section’s a classic flat track part that Rolf picked up on eBay in the USA years ago. He built a separate subframe to fit it to the Kawasaki, made a new seat pan, and had his upholsterer cover it in suede. 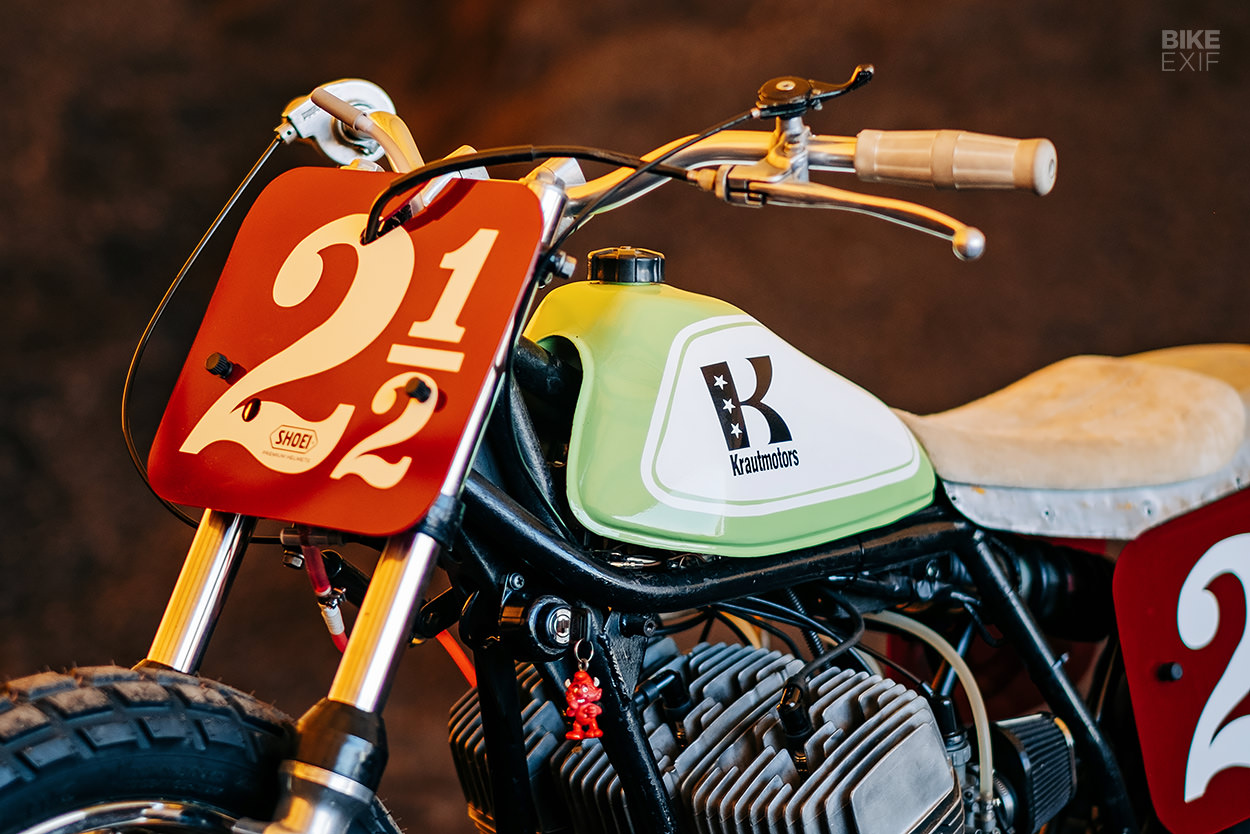 Since this is a track bike, there’s very little going on in the cockpit, short of new LSL bars, vintage-style grips and a single cable throttle. Number boards at the front and sides carry the number ‘2 1/2’—because the bike is a triple, but Rolf isn’t considering it complete until the new engine’s in.

There’s a very peculiar mod hiding behind the front board: a catheter bag, set up to run as an oil tank. “I didn’t know where to put the oil,” says Rolf. “On my last project I used a bicycle bottle, but it was too big. Unfortunately, my stepfather has to use such a thing—so I came up with the idea.” 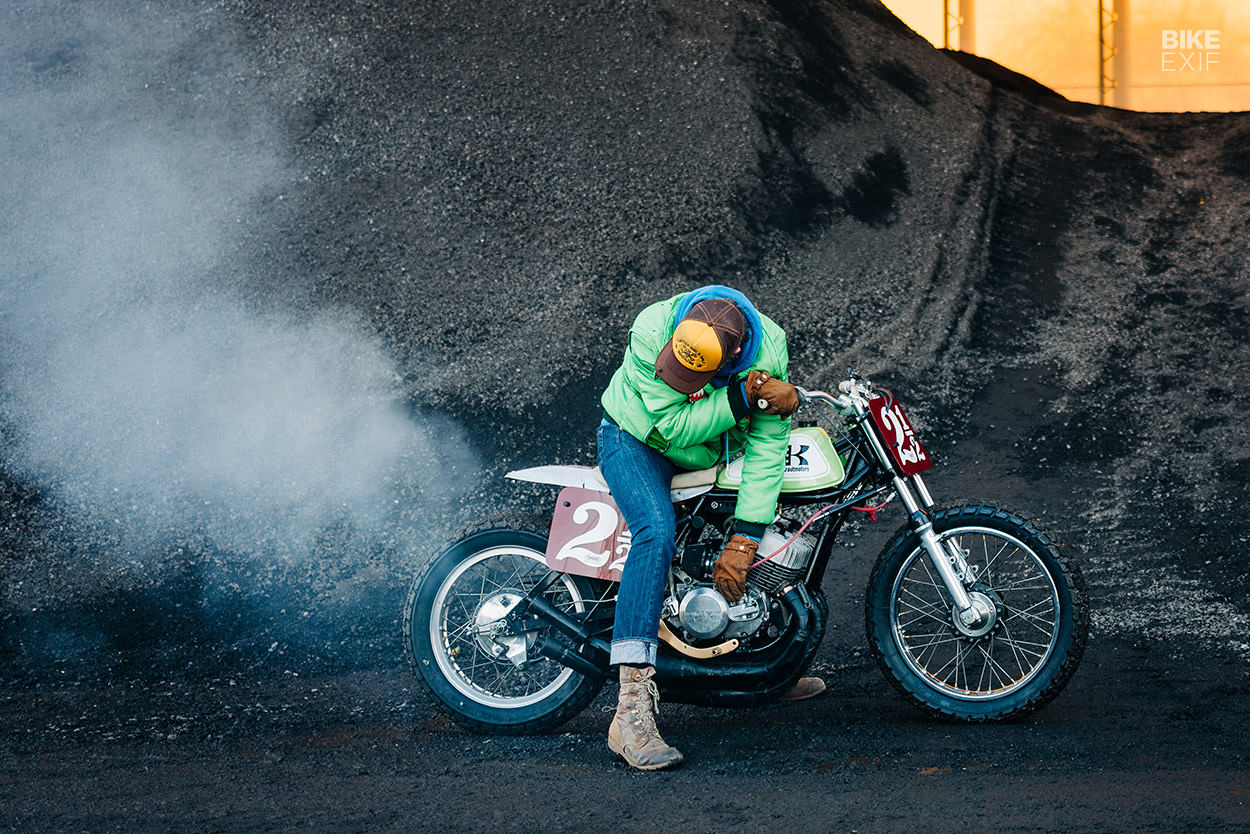 Now that the H1’s complete, Rolf’s patiently waiting for Europe’s lockdown to lift, so that racing can resume. Until then, he’s squeezing in as much test riding as he can… while he prepares to shove that 100 hp screamer in there. 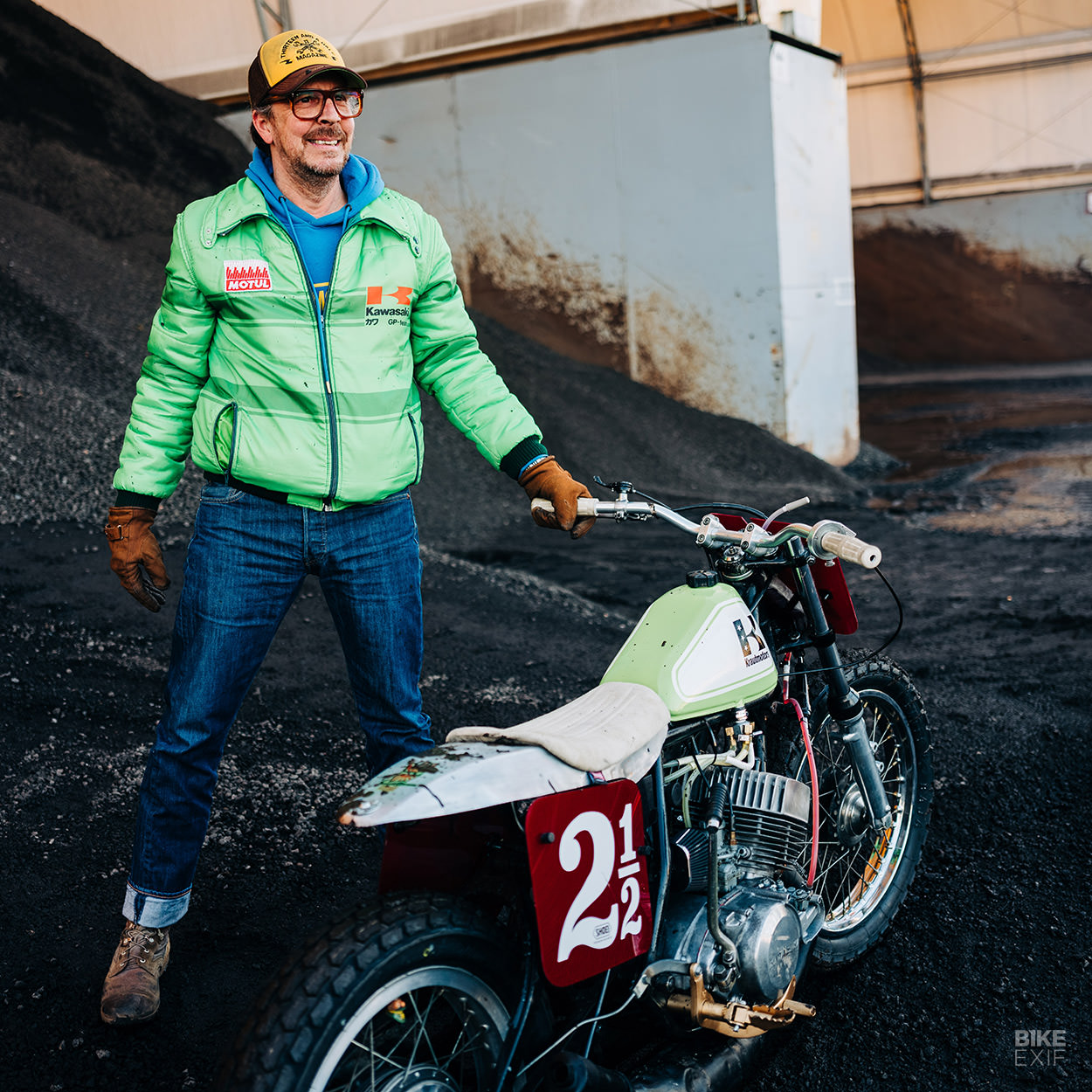