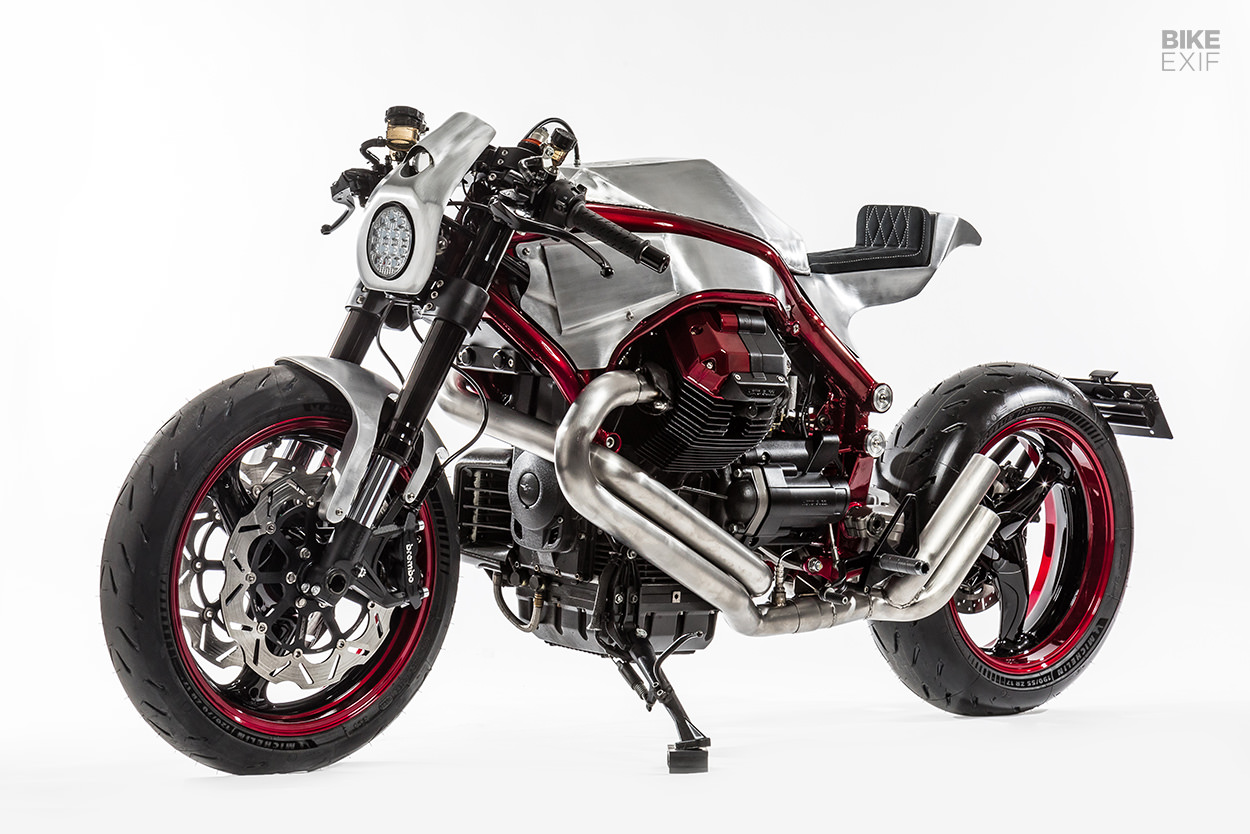 Like many of Japan’s top motorcycle customizers, Kenji ‘Katsu’ Katsumoto got his start with vintage Harleys. But he’s not bound to any one brand or style these days—so when a client requested a Moto Guzzi Griso café racer with street fighter underpinnings, he didn’t hesitate.

Operating as Katsu Motorworks in Fukuoka, Japan, Katsumoto-san built his first Moto Guzzi café racer four years ago. Based on a rare V11 Sport Scura, it bagged him the ‘Best Café Racer’ award at the massive Mooneyes show. And it inadvertently led to this project. 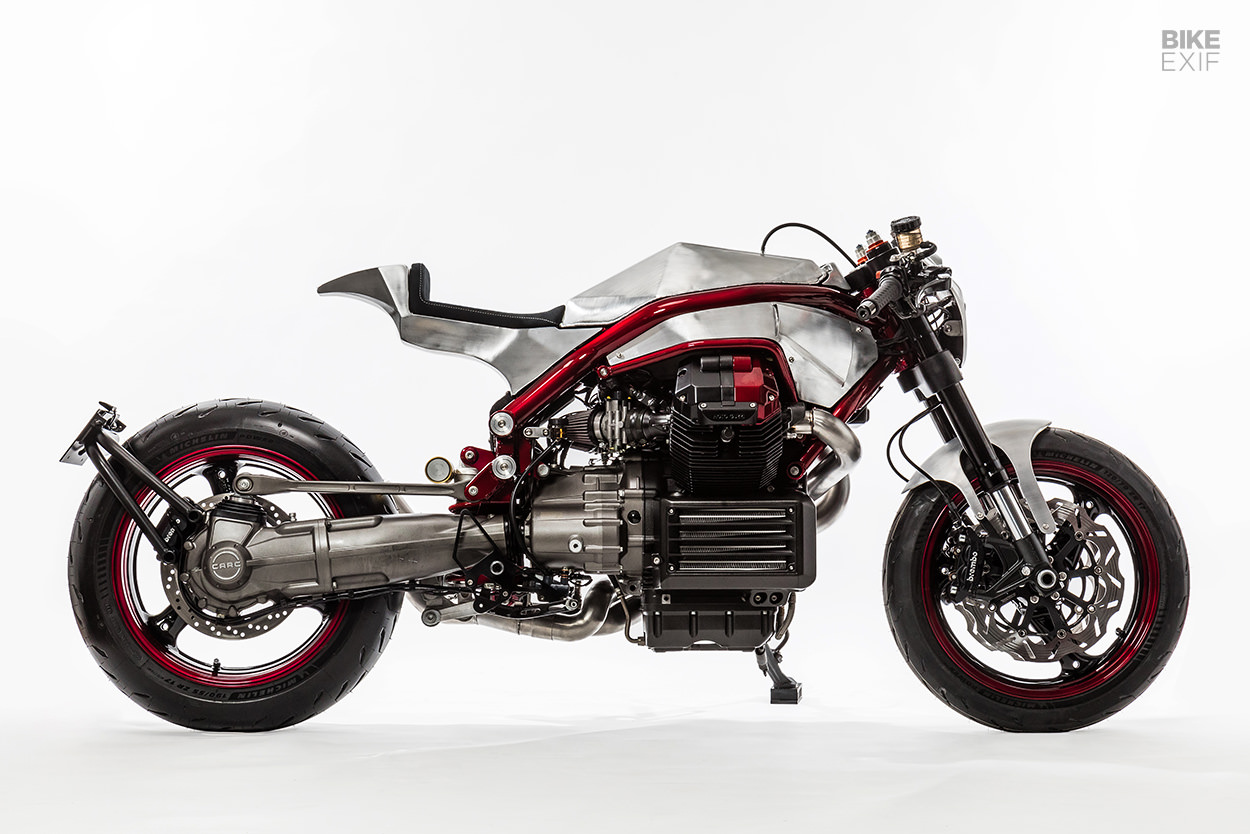 According to photographer Kaz Matsumoto, the client for this build originally reached out to Katsu about the possibility of buying the V11 Sport Scura, and the two struck up a friendship. Before long, the client had commissioned his very own custom Moto Guzzi, requesting the Griso as a donor.

The 1,151 cc Griso 8V would have been the ideal platform, but Kaz tells us they’re hard to come by in Japan. So Katsu sourced a 2006-model Griso 1100 instead, and decided to upgrade it with a few key Griso 8V parts. 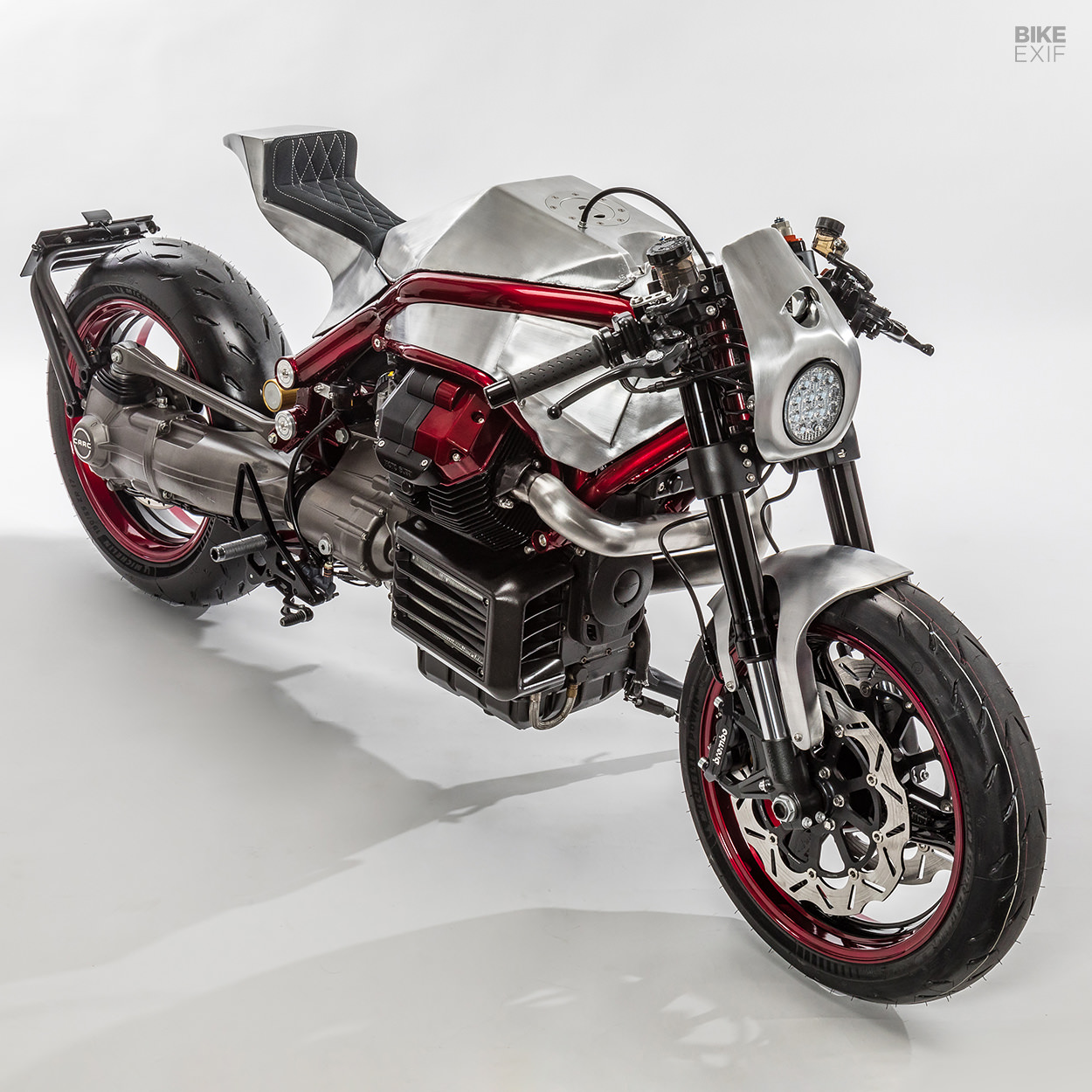 Even though Katsu’s award-winning V11 inspired this build, this is no carbon copy. As the project materialized it headed in a fresh direction, dictated by the client’s proclivities and a couple of particular requests. “The customer said he liked street fighters and café racers,” explains Kaz, “so Katsu decided to combine both.”

“Also, the owner is a speed freak, and so Katsu came up with a sharp, angular design.” 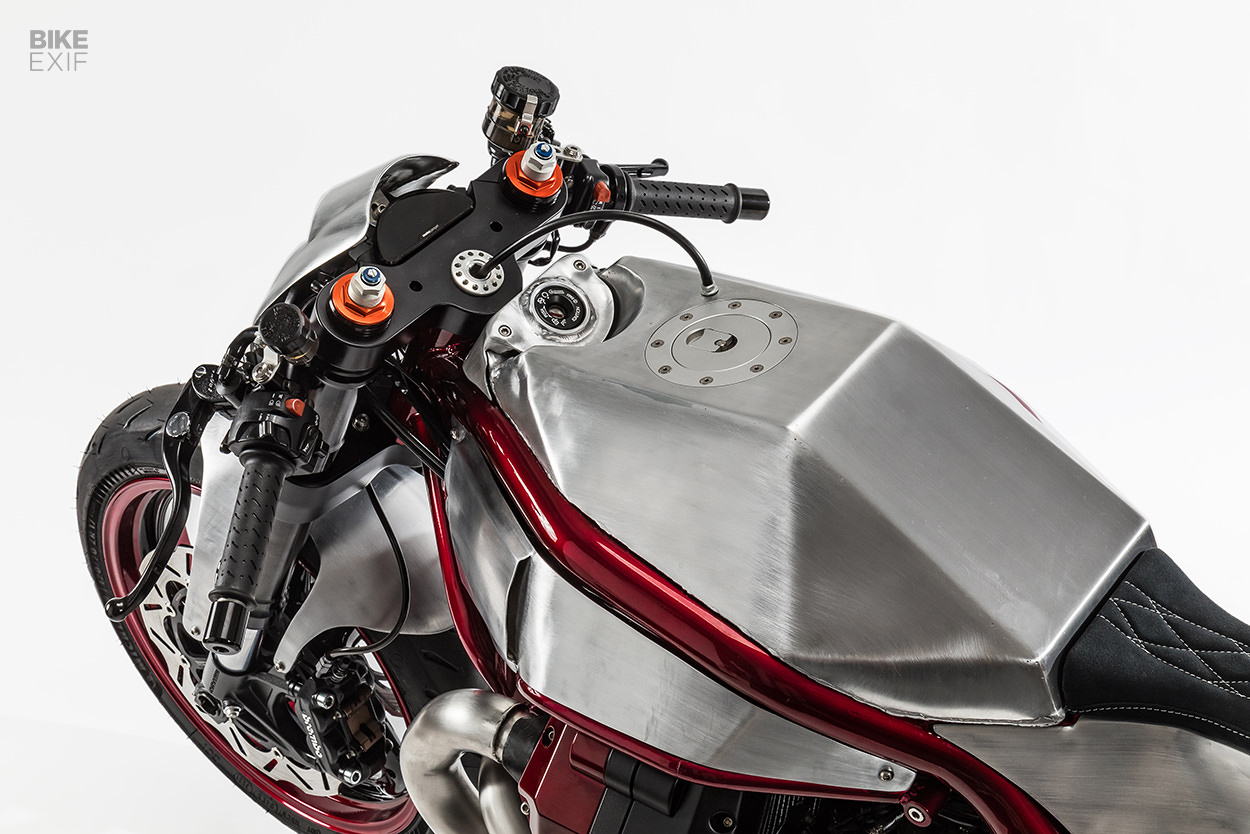 One specific request was that all the bodywork be shaped in aluminum—and left unpainted. So Katsu ditched all the Moto Guzzi bits, and began fabricating their replacements, starting with the fuel tank. It wasn’t all plain sailing though, and it took a lot of trial and error to achieve the aggressive, geometric vibe that this Griso now wears so well.

It takes a few passes to pick up all the subtle details. Just in front of the gas tank is a separate handmade housing for the ignition—a small part that undoubtedly took much effort to produce. We also love the air ducts that are integrated into the custom side panels, and the frame rails that Katsu built to sit underneath them. 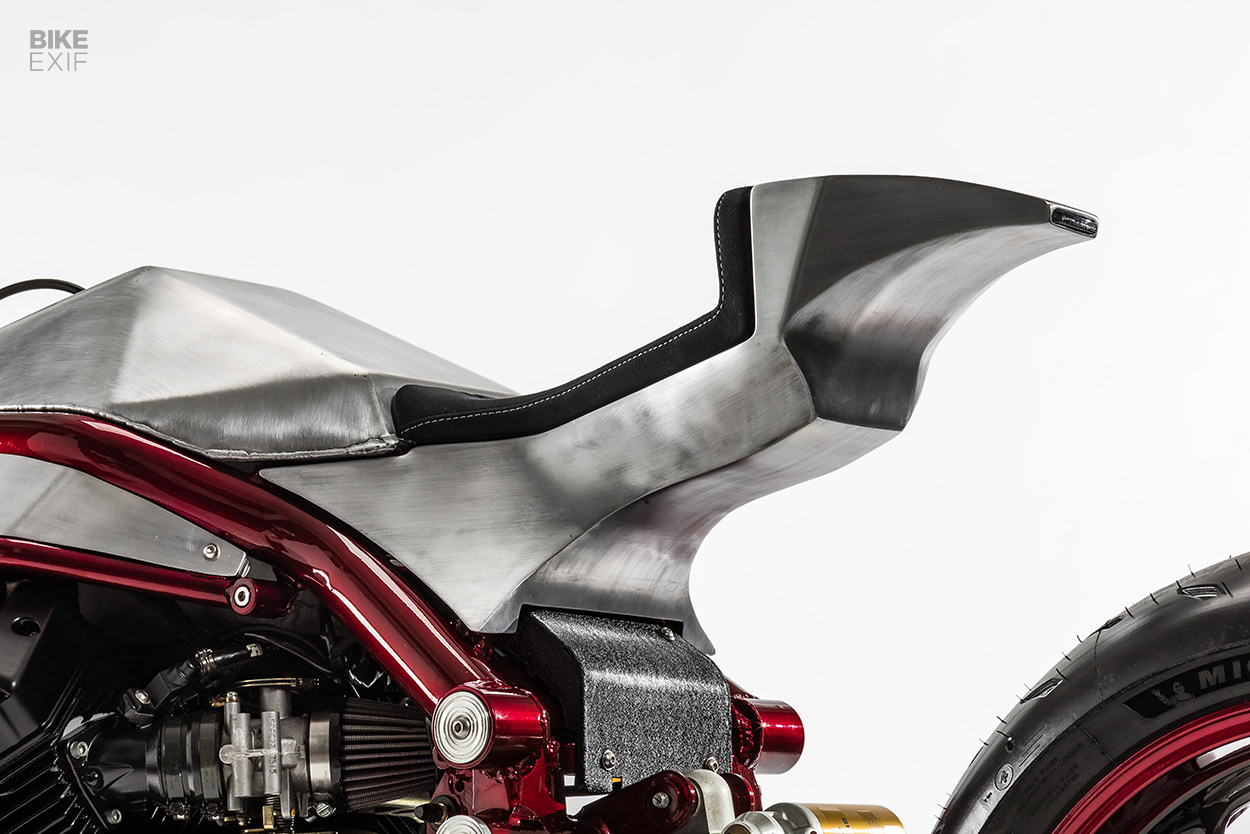 The short boxed tail section hides a bespoke subframe, leaving the impression of a floating rear end. Details abound here too; a tiny LED taillight embedded in the back, a splash guard lower down, and a stylish hit of Alcantara on the seat. And if you’re looking for the turn signals, you’ll find them mounted to either side of the custom-made license plate bracket.

The front end is tidy too, with a hand-made fender that feels organic, but doesn’t clash with the other angular pieces. Higher up is a custom headlight nacelle, with two embedded LED headlights. 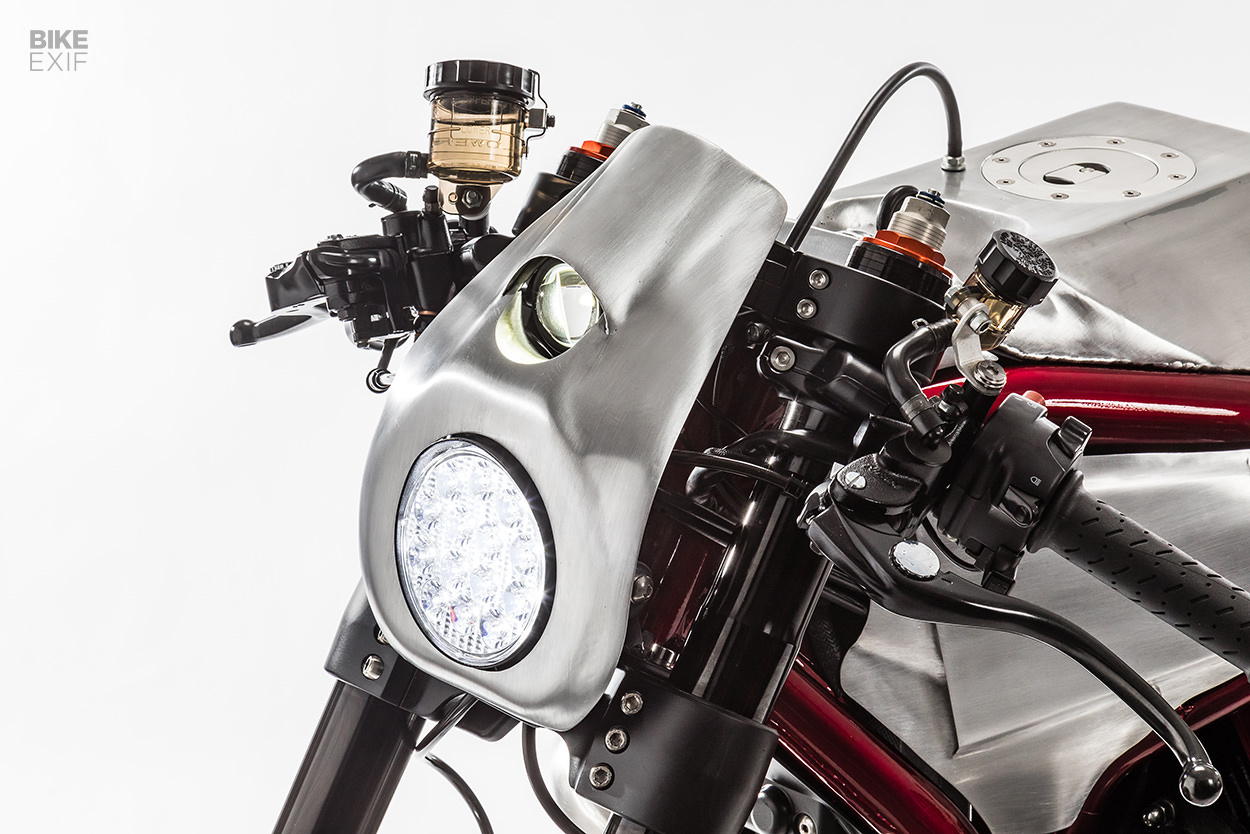 Katsu installed a set of CNC-machined yokes just behind that, so that he could run clip-ons without cluttering the cockpit with a pair of ’empty’ bar mounts. The bars are off a Ducati 999S and are fitted with Nissin controls. A Motogadget speedo sits perfectly in the gap in front of the top yoke.

Those yokes also hold a set of fully-adjustable upside-down forks from a newer Griso 8V. Katsu also wanted to use the 8V’s radial-mount Brembo calipers, but they wouldn’t match up with the 1100’s retro-fabulous three-spoke wheels. In the end, a set of custom disc spacers with new Pro Brake discs solved the problem. 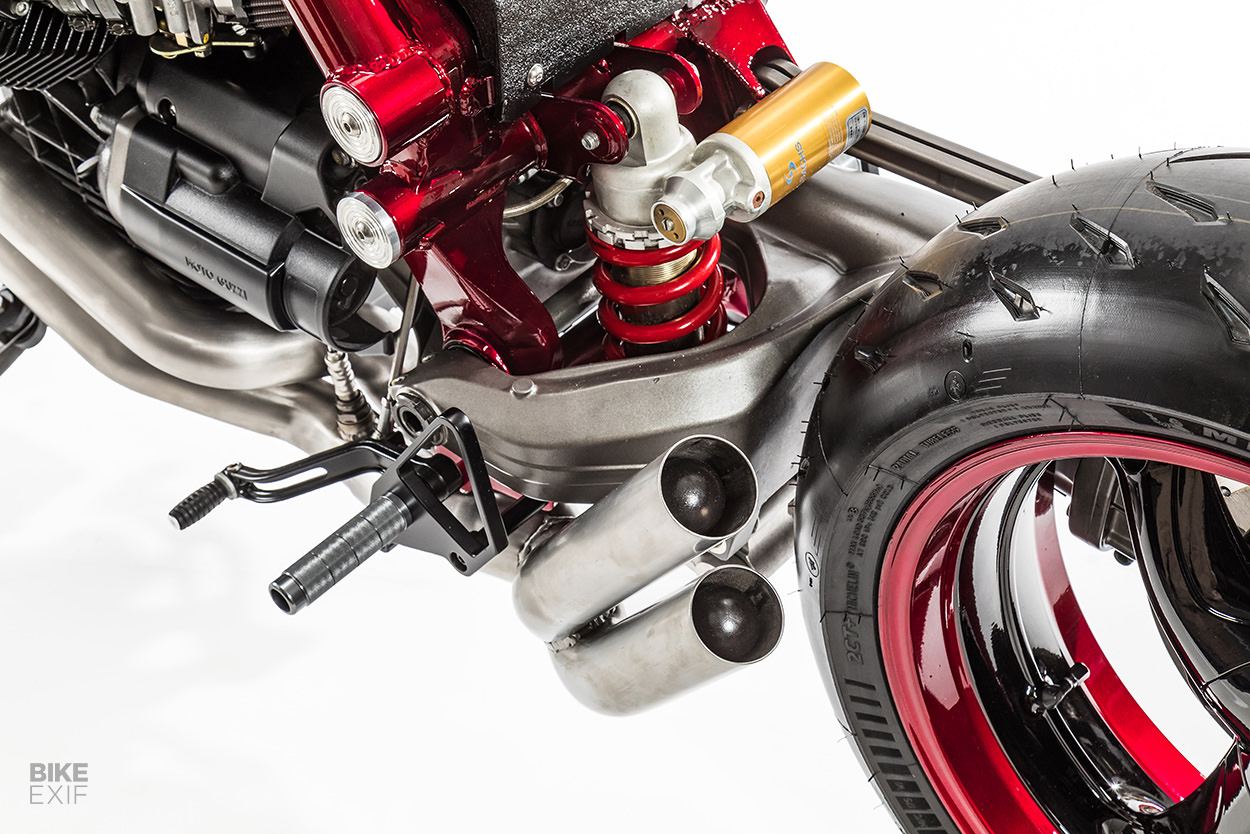 Katsu didn’t tear into the Moto Guzzi’s engine internals, but he did clean it up on the outside and treat it to fresh paint. The airbox has been tossed in favor of a pair of K&N filters, while a burly stainless steel exhaust system provides the soundtrack. 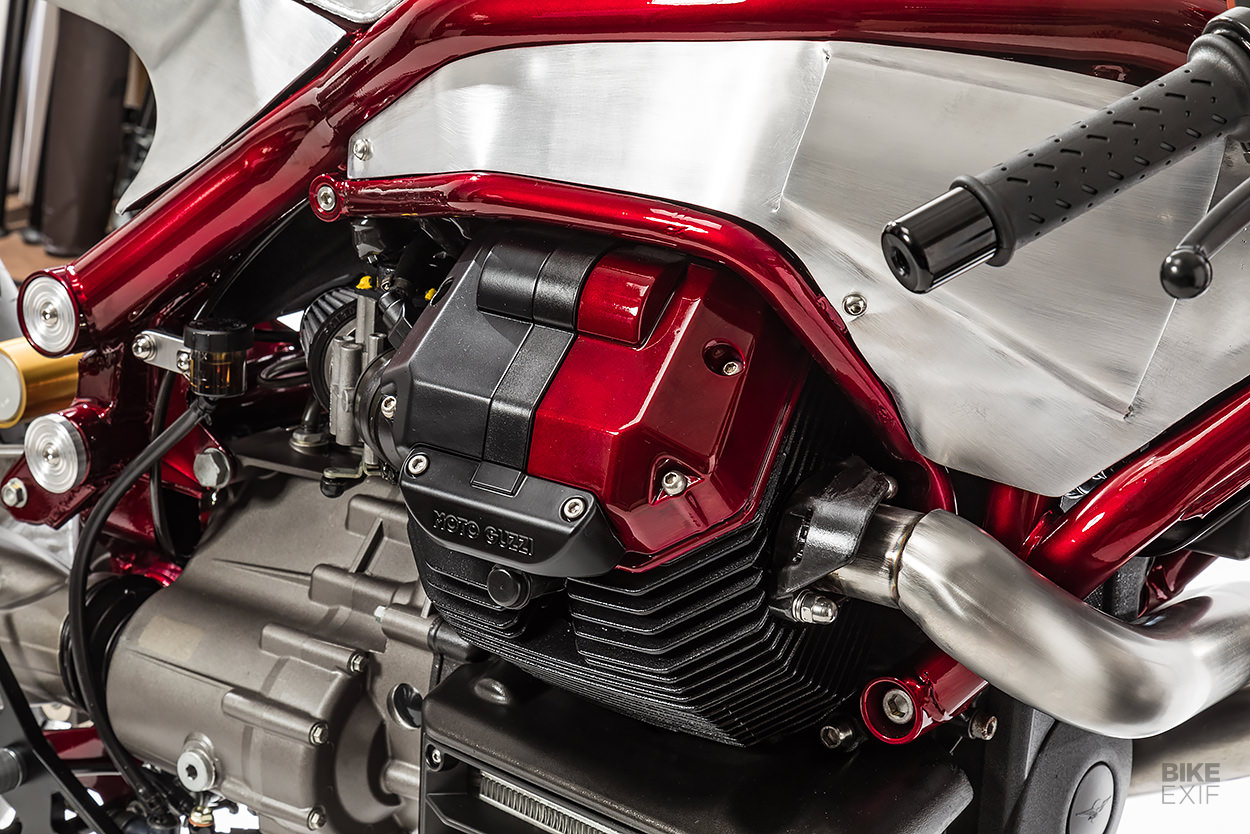 Before launching Katsu Motorworks, Katsu cut his teeth in a Harley-Davidson dealership for twelve years, focussing on metalwork and paint. His portfolio is stacked with gorgeous paint jobs, but he respected his client’s wishes here and let the aluminum shine through.

The client did want at least some color on the Griso, so Katsu picked a deep candy burgundy from House of Kolor and coated the frame. With accents on the wheels and cylinder heads, it’s the perfect touch to offset the jagged bodywork. 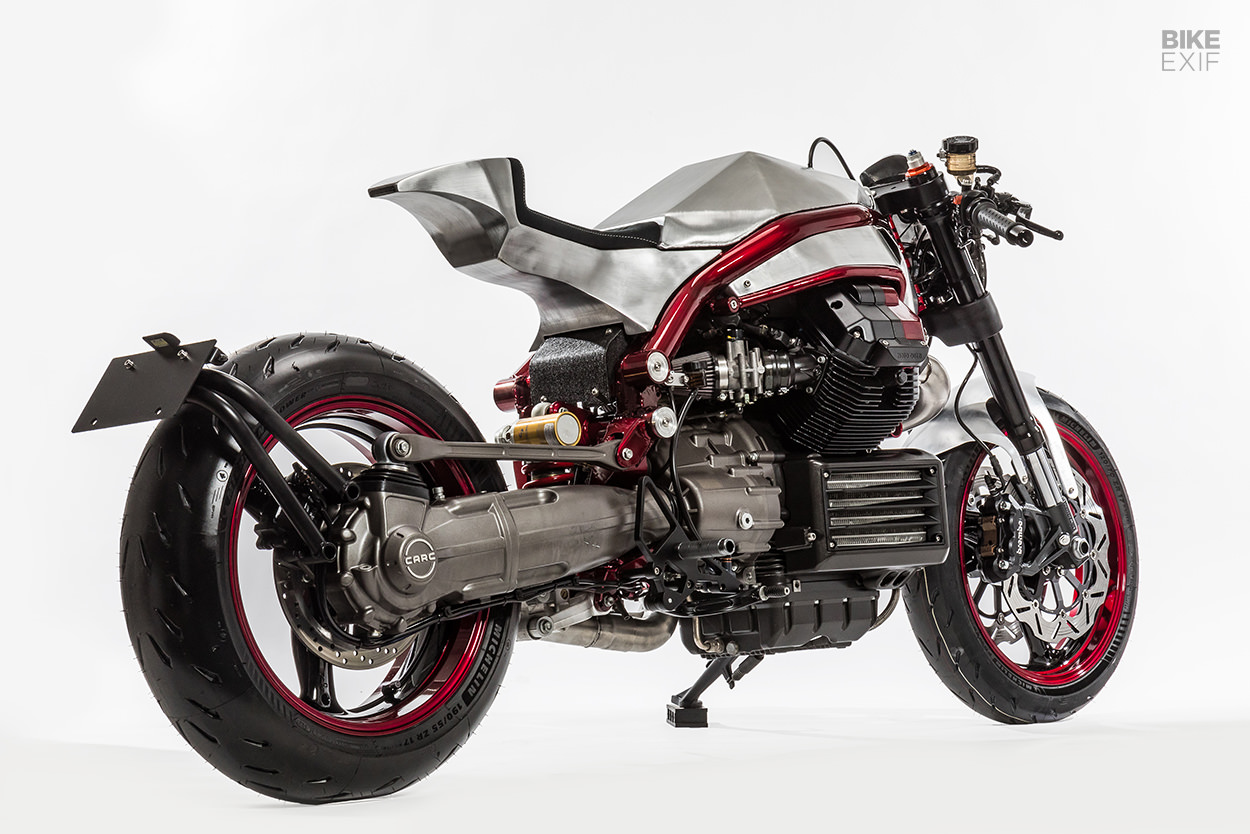 It’s hard to believe that a modern café racer like this could roll out of the same workshop as a Shovelhead chopper—but it’s true, and it’s awesome. Here’s hoping that Katsu never settles. 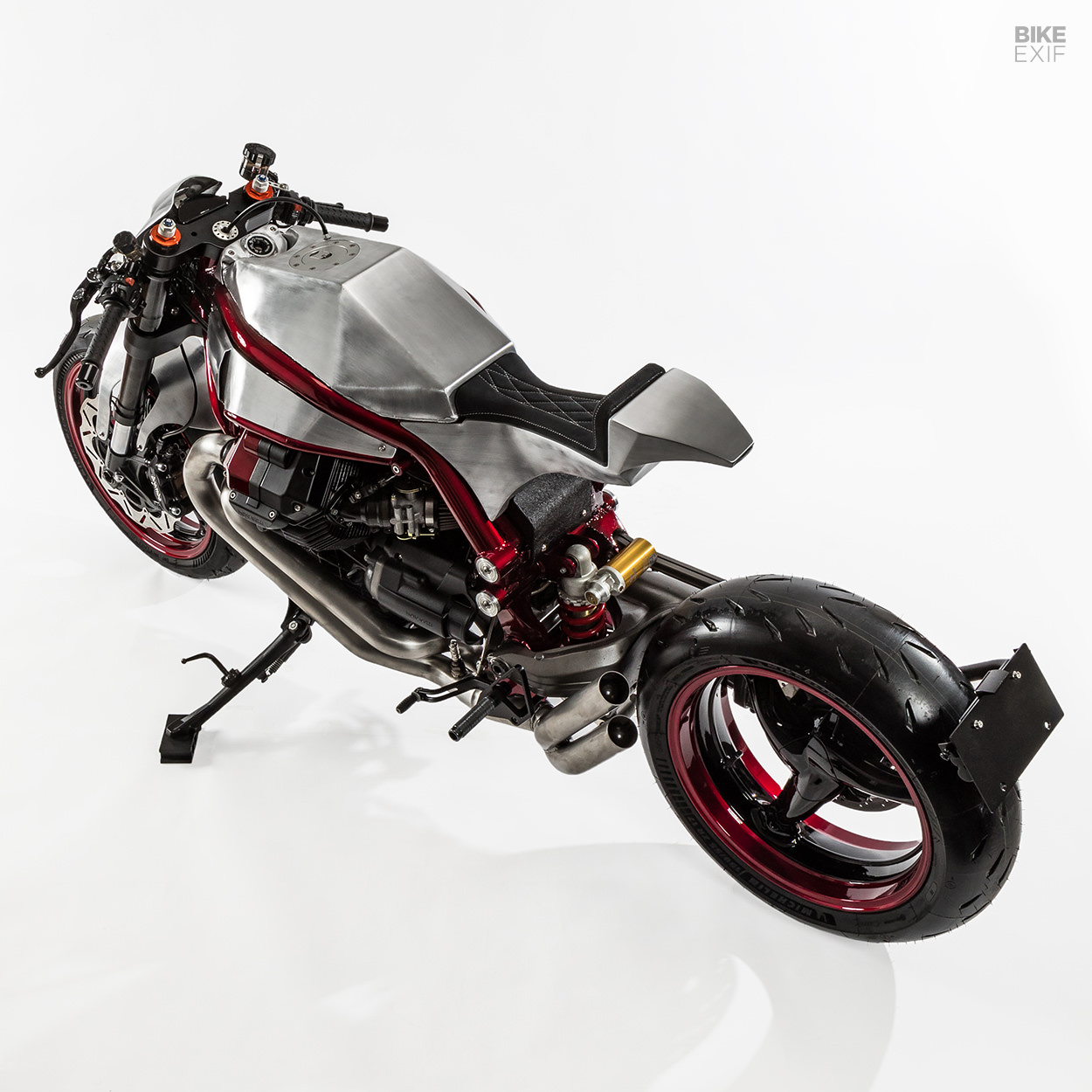