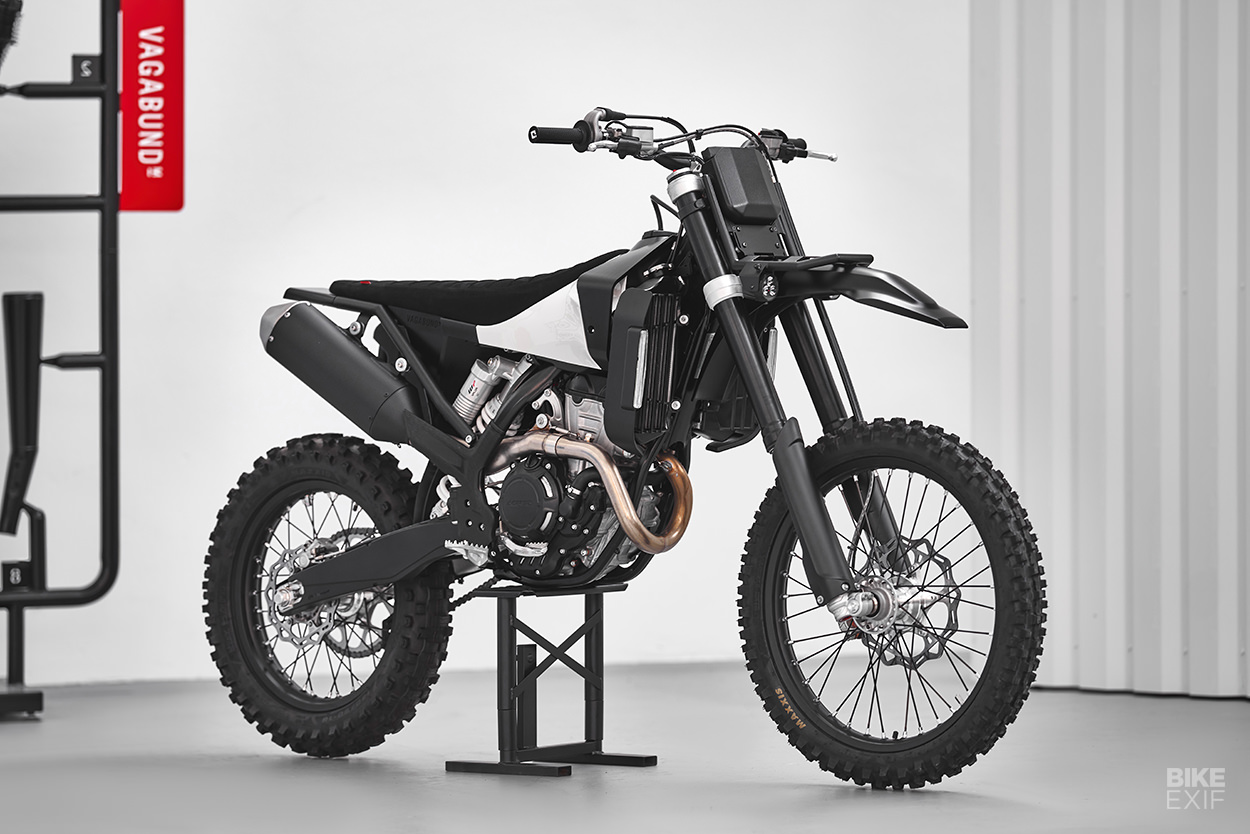 In Britain Marmite, the yeast extract spread, is hugely popular. But although millions of jars are sold every year, it’s a very acquired taste. The hashtag of the brand is #LoveItHateIt.

In the motorcycling world, KTM is probably the closest equivalent. The plastics are angular and aggressive, and the brand color is a retina-searing orange. Personally, I love KTM’s style—but I also know plenty of people who don’t. 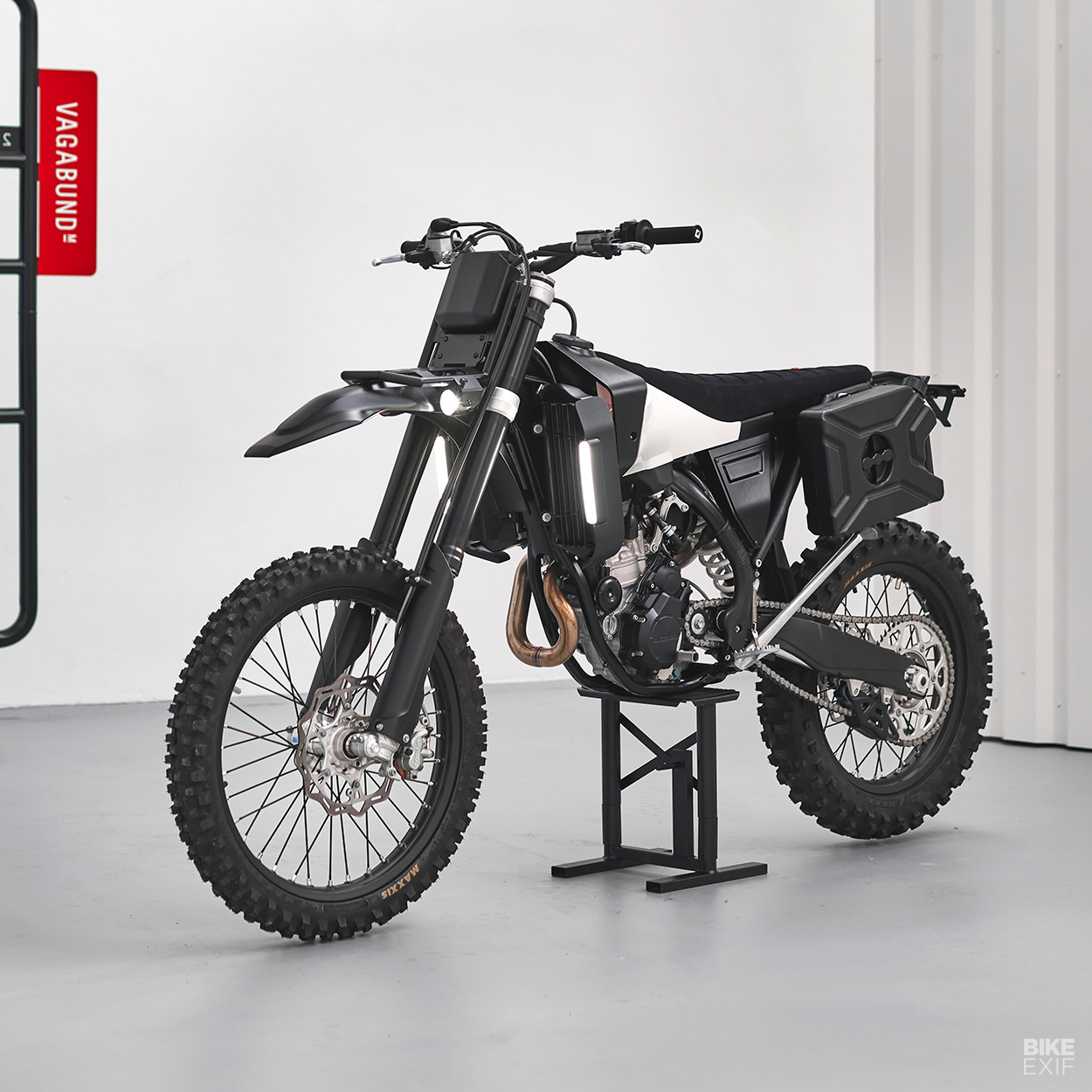 This KTM from Vagabund Moto must be hard for anyone to resist, though. Led by Paul Brauchart and Philipp Rabl, the Austrian workshop is famed for beautiful aesthetics as well as high-tech manufacturing skills. 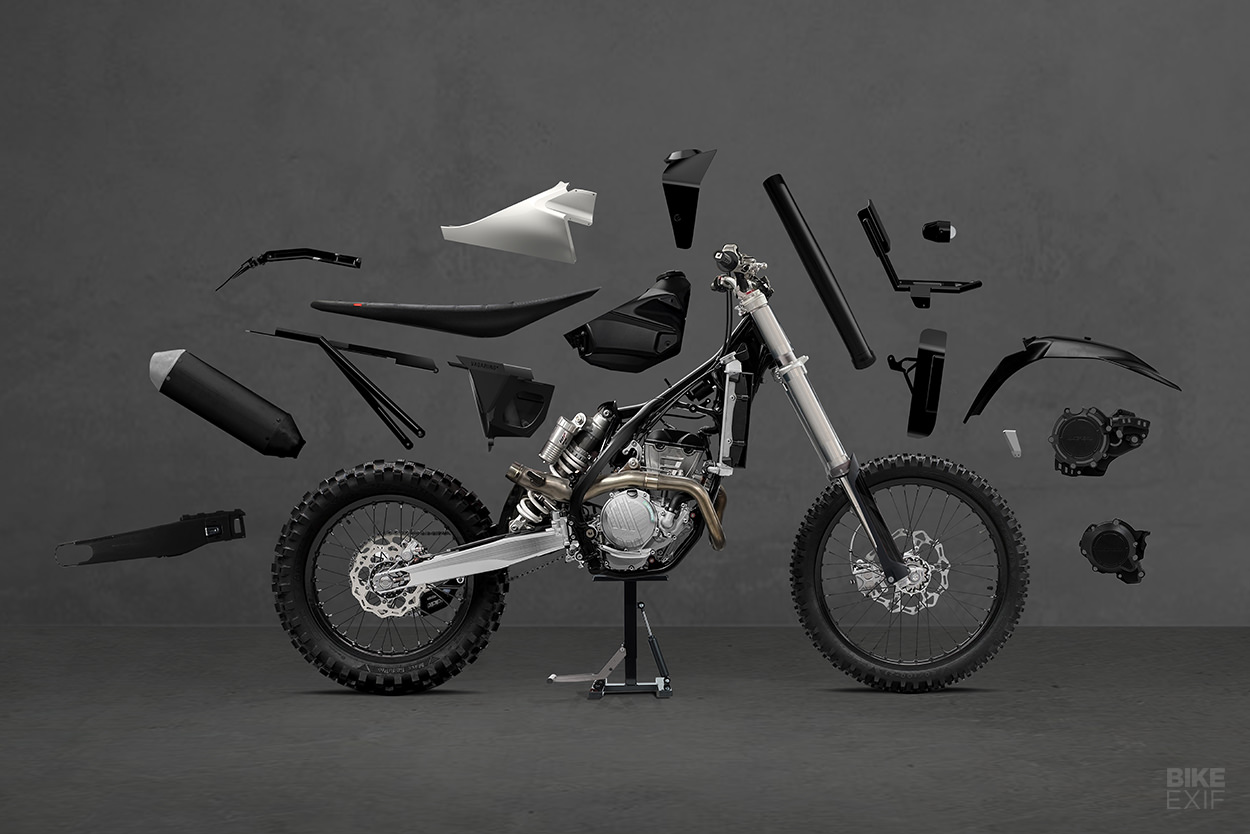 “We had a client who was interested in something like our Honda NX650,” says Paul. “We got a lot of requests for that bike after publishing. So we thought it would be cool to build something like our Dominator, but easier to handle—in shipping as well as building.”

A project like this KTM is very complex though, and the run of parts is not big enough to deliver economies of scale. “You think of thousand things you would do in a different way with a one-off bike, but it’s still made-to-order and by hand,” says Paul. 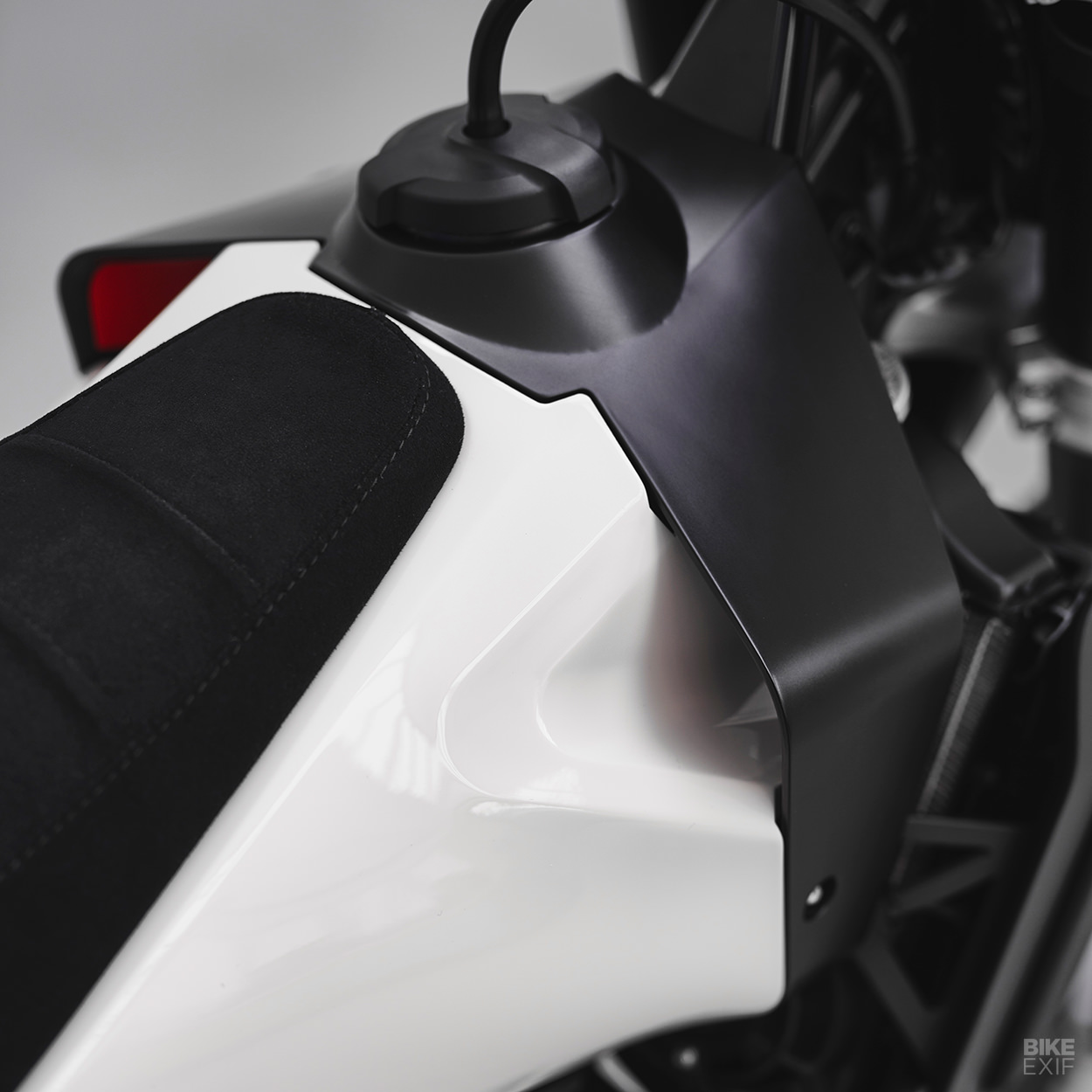 “People often hear ‘series motorcycle’ and think it’s mass produced, but this KTM is still a tailor-made custom project. There’s no difference in production cost if we build one or five.”

The quality has always been sky-high with Vagabund’s previous builds, and this one is no different. The bodywork is stealthy and monochromatic, but pieced together with factory-level precision. 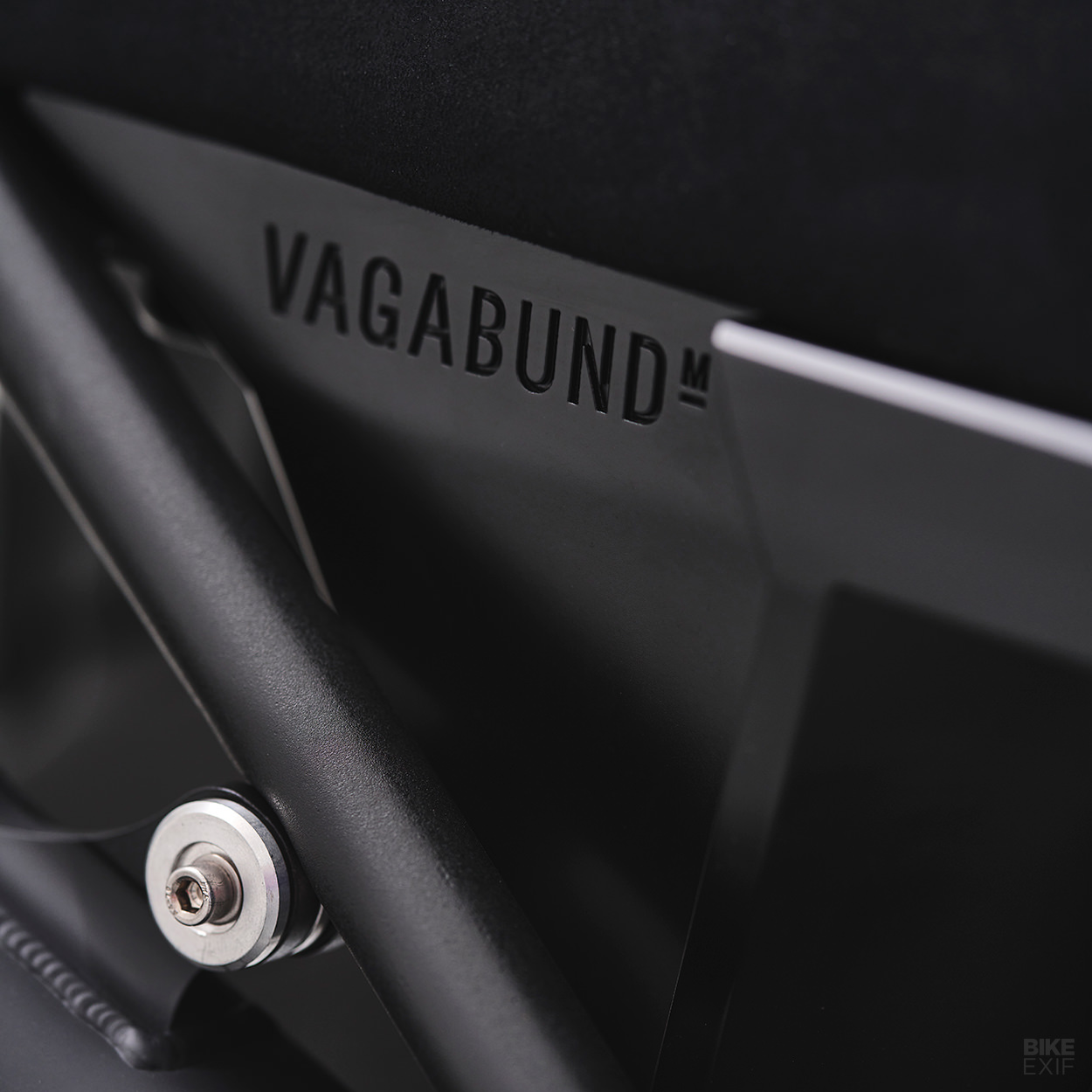 “The hardest part was trying to generate a minimalist look,” says Paul. “We’re producing a fully functional off road bike, with all the necessary parts to be street legal in Austria. Dealing with a lot of compromises!”

Vagabund are adept at CAD and 3D printing, and the KTM is a showcase for their skills. “We disassembled the whole bike and started by 3D scanning it,” says Paul. “It was important to keep the original mounting points and give the KTM a new look, without cutting or welding anything on the frame.” 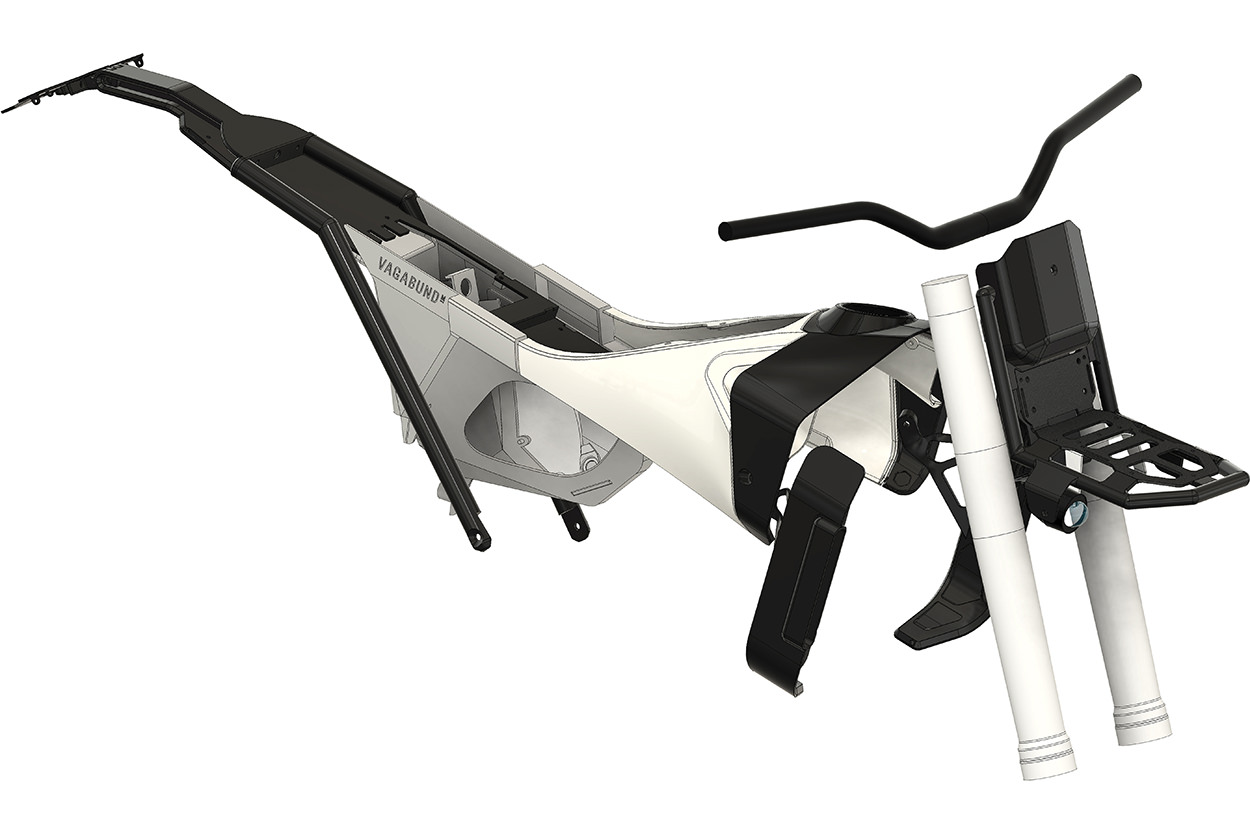 This means that buyers who don’t want to order a complete 350 Safari from Vagabund can ditch the plastics from their own bike and fit the KTM kit, without having major mechanical skills.

The kit does not compromise the functionality of the 350 EXC, either. “We keep the original air filter, and protect the electrics and so on,” says Paul. “You can still go off-roading without any restrictions.” 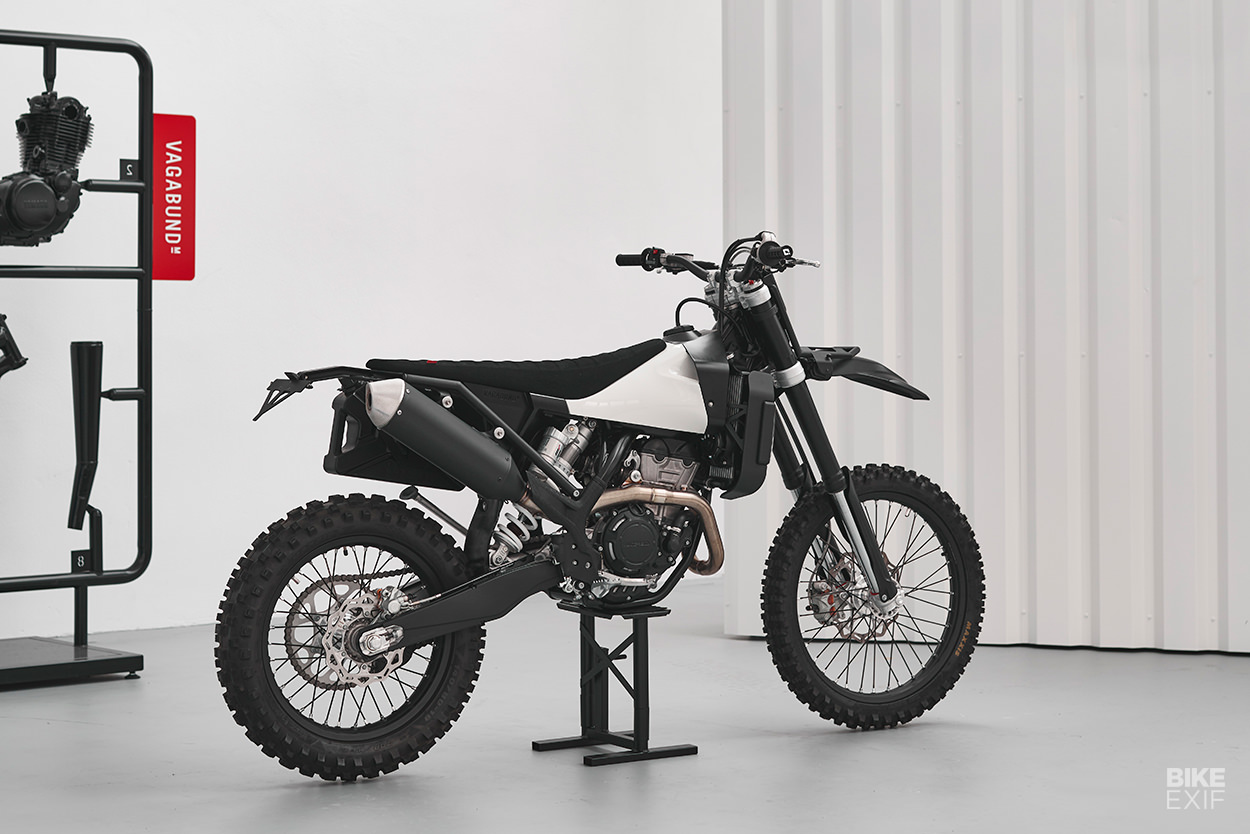 The bodywork material is Polyamid 12, a hard nylon polymer with good tensile strength and abrasion resistance.

Vagabund have used this to 3D print everything from the fuel tank cover to the air filter housing, plus smaller items such as the licence plate holder and the radiator surround—which cleverly includes daytime running lights. 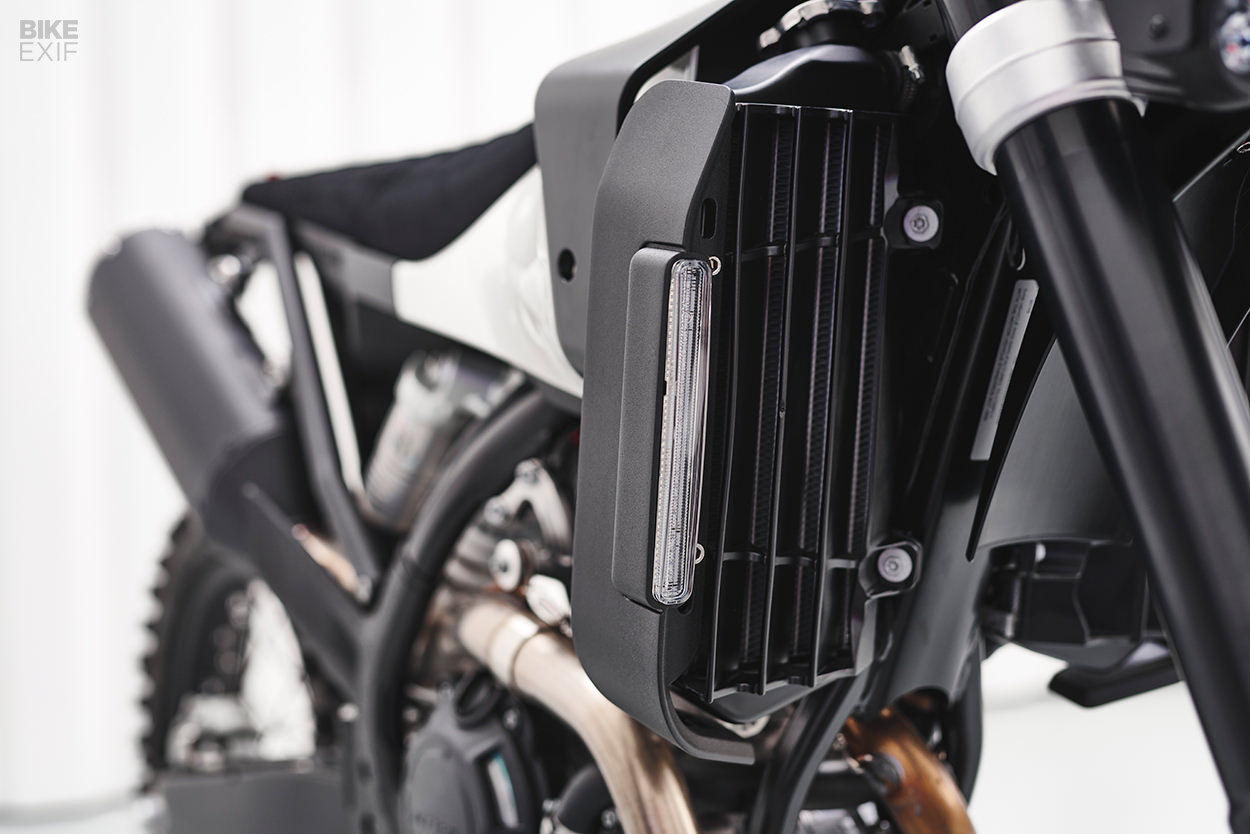 There are two versions of the 3D printed rear end, which slots into a beautifully finished custom-made subframe with a discreet electrical box hidden underneath.

On top is a long and slim seat with immaculate Alcantara upholstery, complete with branded tab—just like you’d find on a factory-built machine. Alongside is a GKA auxiliary fuel pack on a custom metal rack; this supplements the main 12-liter tank, which is a KTM motocross unit rather than the factory-fitted 350 EXC one. 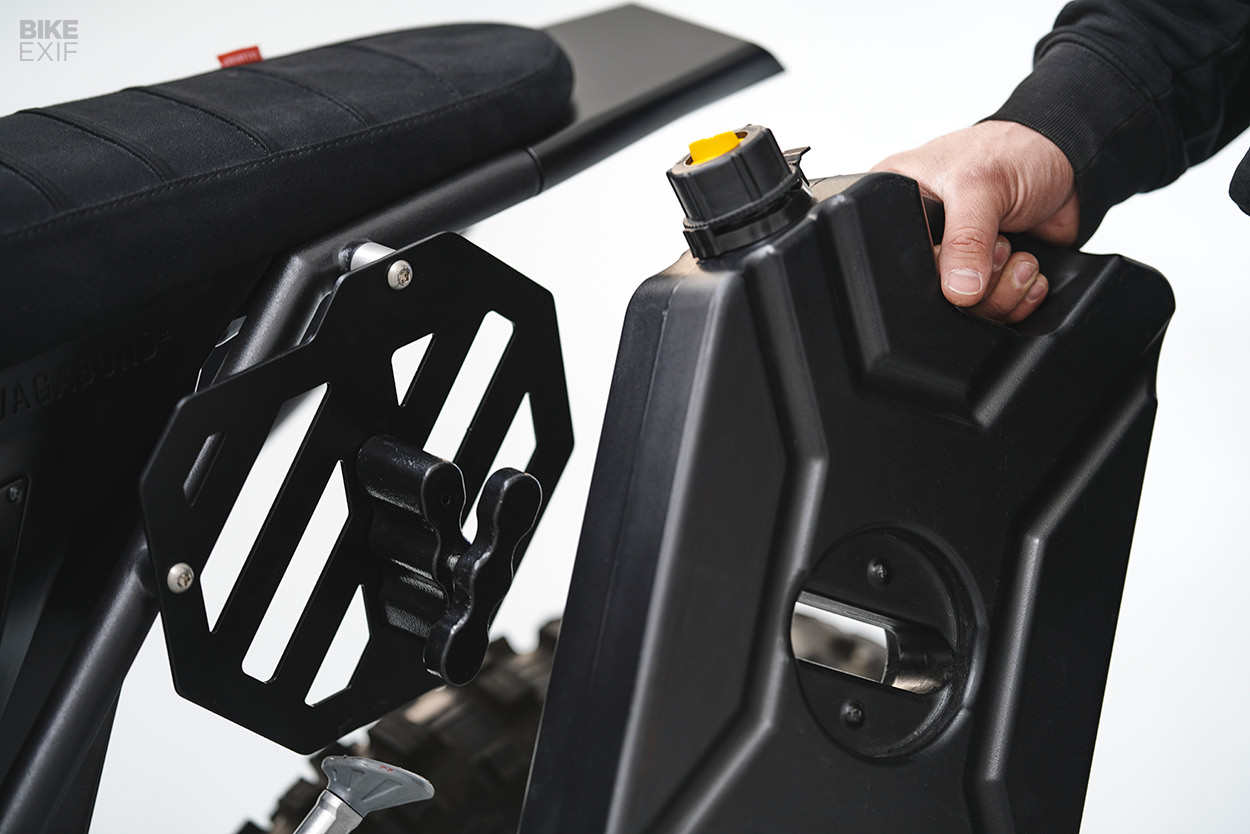 At the business end, the chunky 48mm WP forks have been hard anodized, and the stock fender has been replaced with a Husqvarna TC85 unit painted black. Right above is a compact rack that houses miniscule Kellermann LED turn signals.

The rack is also flanked by a pair of headlights—Highsider’s powerful Satellite LED units. It’s a very compact setup, since the lenses are a mere 44mm in diameter. 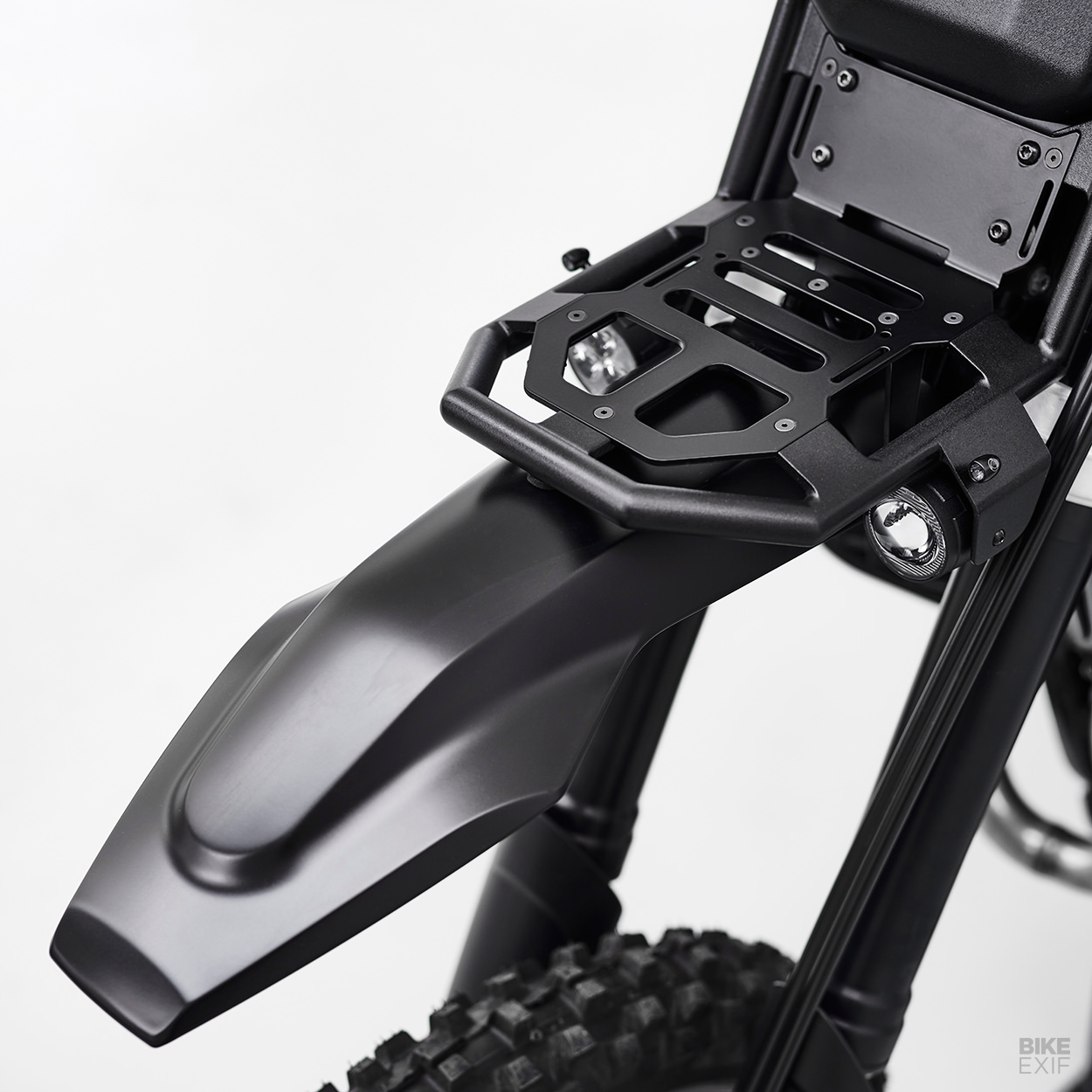 To seal the deal, Vagabund have developed a set of engine and swingarm covers, and they also add a dark ceramic coating to the exhaust muffler. But the Maxxis dirt tires shown in these images are an option; if you wish, more road-biased rubber can be fitted.

“It depends on the final use,” says Paul. “We really recommend it as a city bike.” Vagabund can also supply an Austrian TÜV certificate to confirm roadworthiness, and can adapt the paint and finishes to a customer’s tastes. 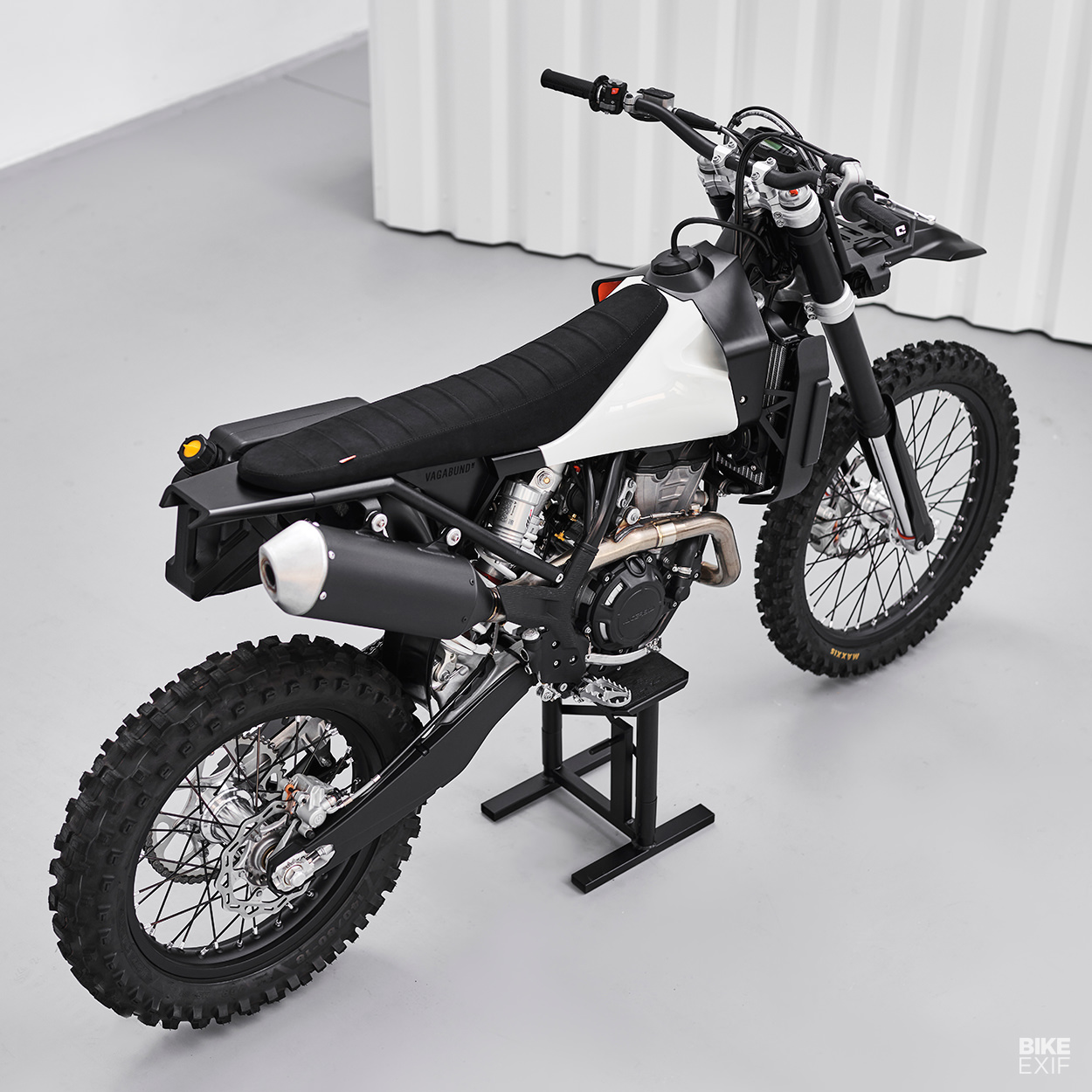 We’d take the KTM just as it’s shown in these images. But with a set of tires that can handle tight city streets, as well as hard pack trails—something like Continental TKC70s.

Then we’re looking at the ultimate commuter weapon. 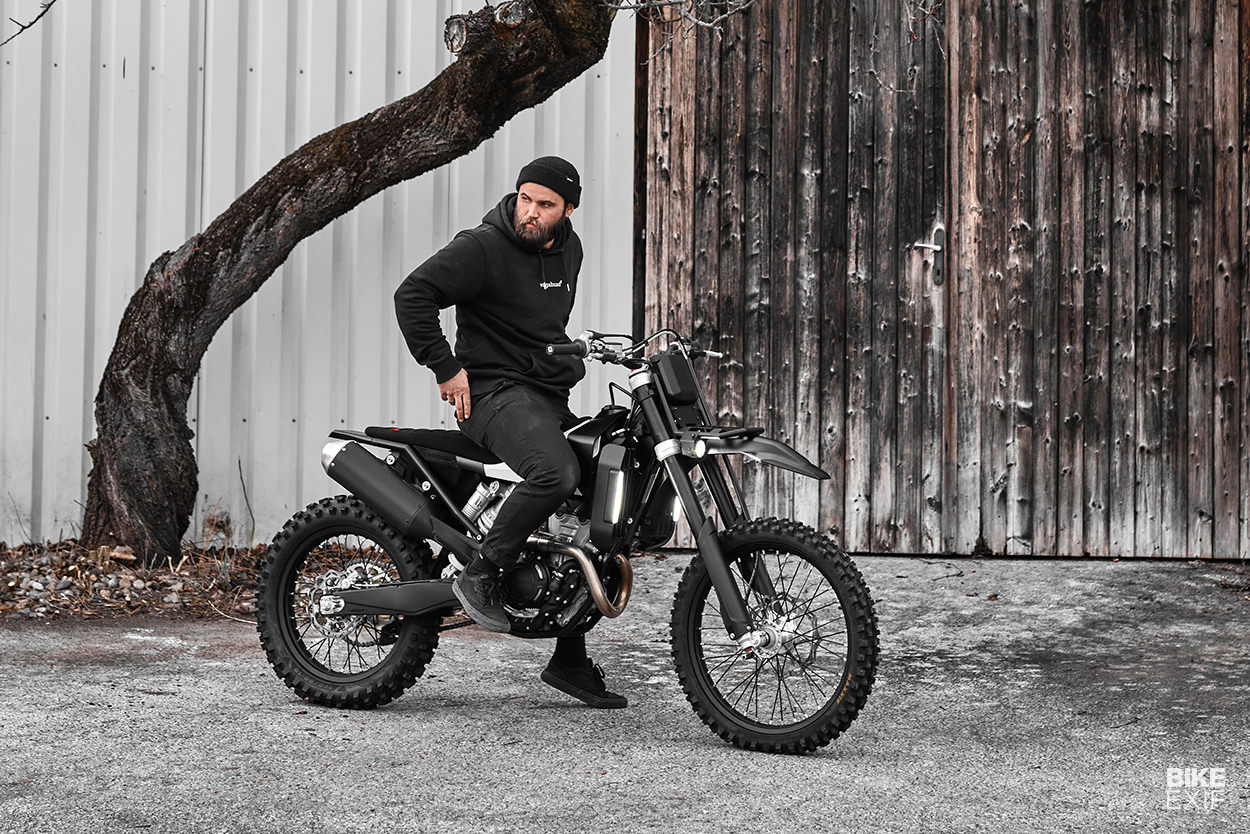