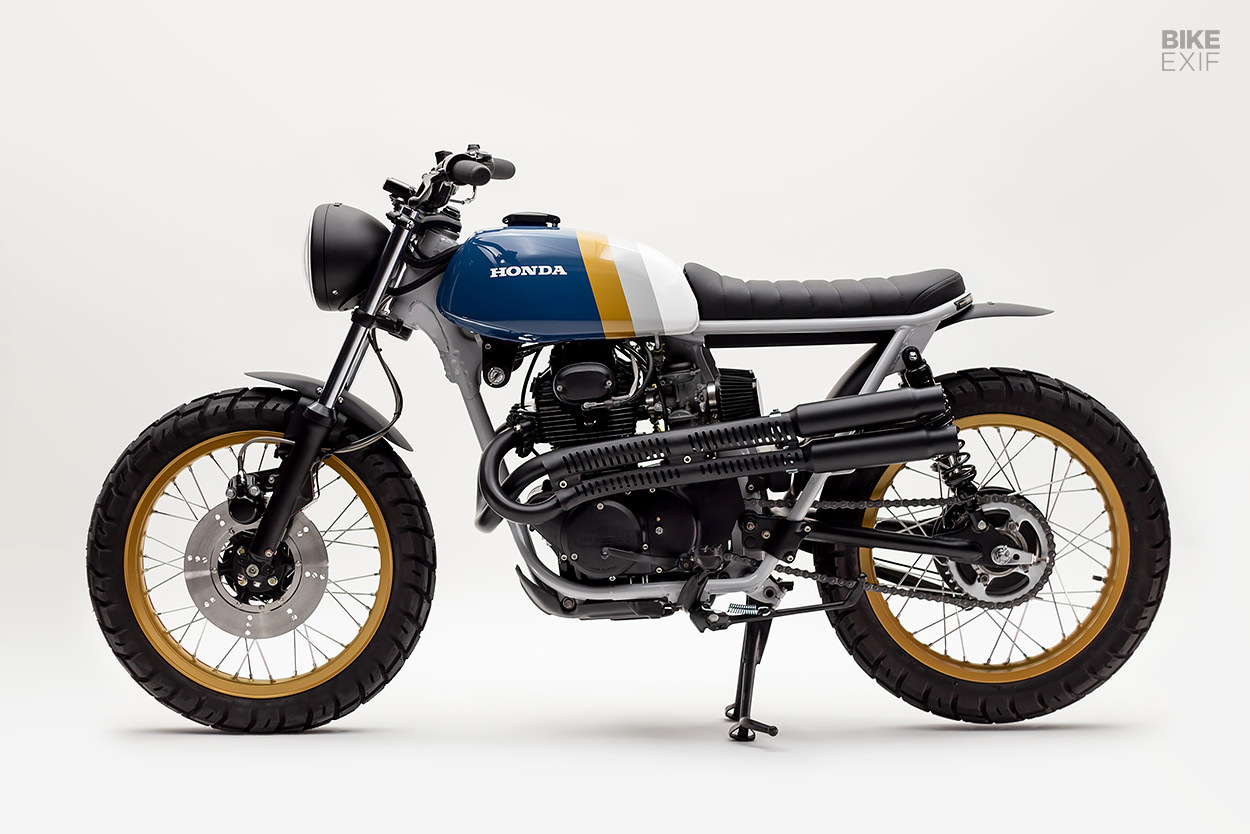 Honda motorcycles have a reputation for being unkillable, but whoever used to own this Honda CL350 sure gave it their best shot. By the time it ended up at Slipstream Creations, it had a missing muffler, a massive dent in the fuel tank and a Tupperware container for a taillight housing. But true to form, the 49-year-old engine still ran.

Based in St. Louis, Missouri, Slipstream Creations used to be a one-man band run by James Fawcett. His son’s recently joined the team, and the two take on anything from full bike builds to parts fabrication, paint and powder coating. They also make furniture, tackle metal fabrication jobs, and are currently building a custom overland trailer. 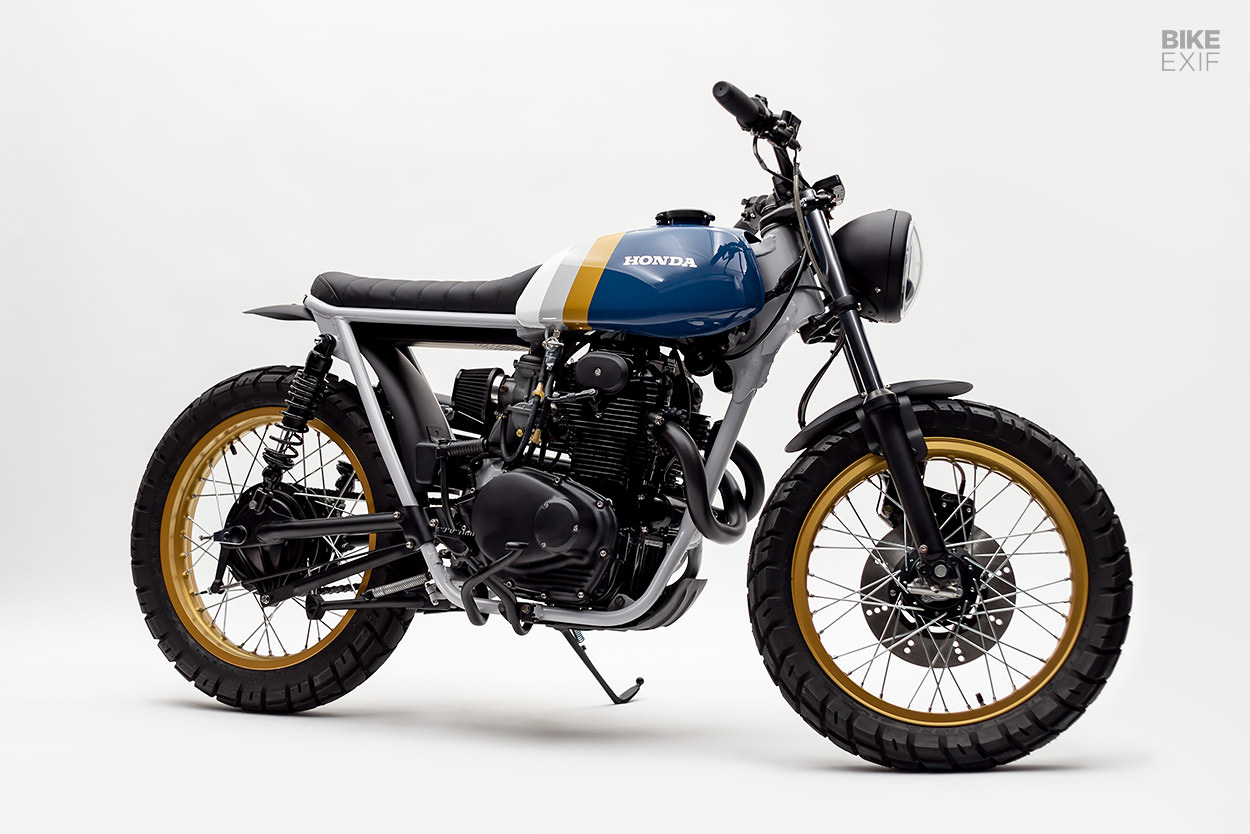 When it comes to motorcycles, James has a thing for older small-capacity Hondas. So this CL350 project was right up his alley. “The 1972 Honda CL350 is the iconic 70s scrambler that gave thousands of riders a taste of fun and freedom in a versatile, reliable package,” he says.

“With a variety of restomod and custom scrambler ideas on the table, we knew the CL would be a great platform to build on. Working collaboratively with the customer, we started down the road together with a vague idea of where we were headed—and the final product began to reveal itself organically as we progressed.” 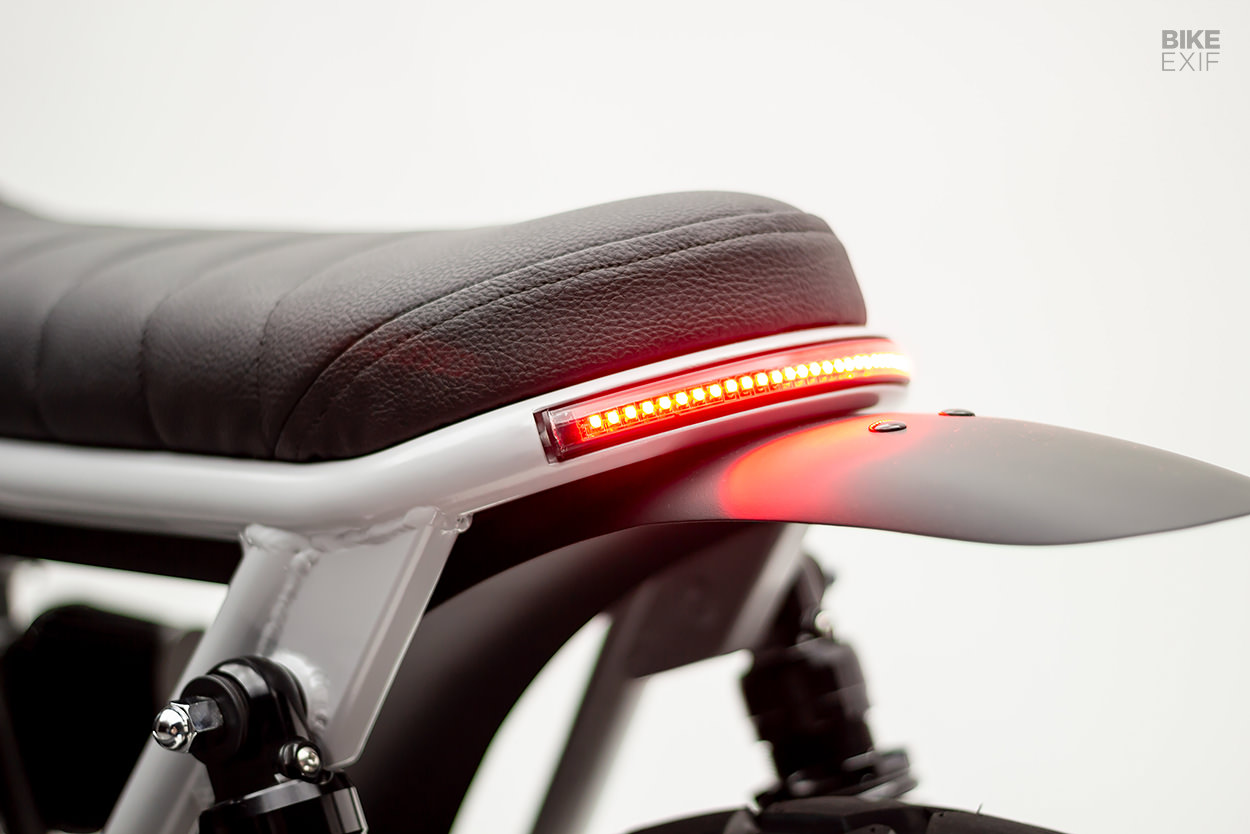 Slipstream started by ditching the CL’s stamped steel subframe, and replacing it with a more elegant chromoly unit. Since the customer plans to ride solo, the guys opted for a shorter rear end, and shaved off the OEM passenger peg mounts too. New tank brackets and shock mounts helped to even out the CL’s lines, for a sharper silhouette.

There’s a new seat up top, with a custom battery tray tucked away underneath. Out back is an integrated LED strip to handle both taillight and turn signal duties. A custom rear fender keeps muck at bay. 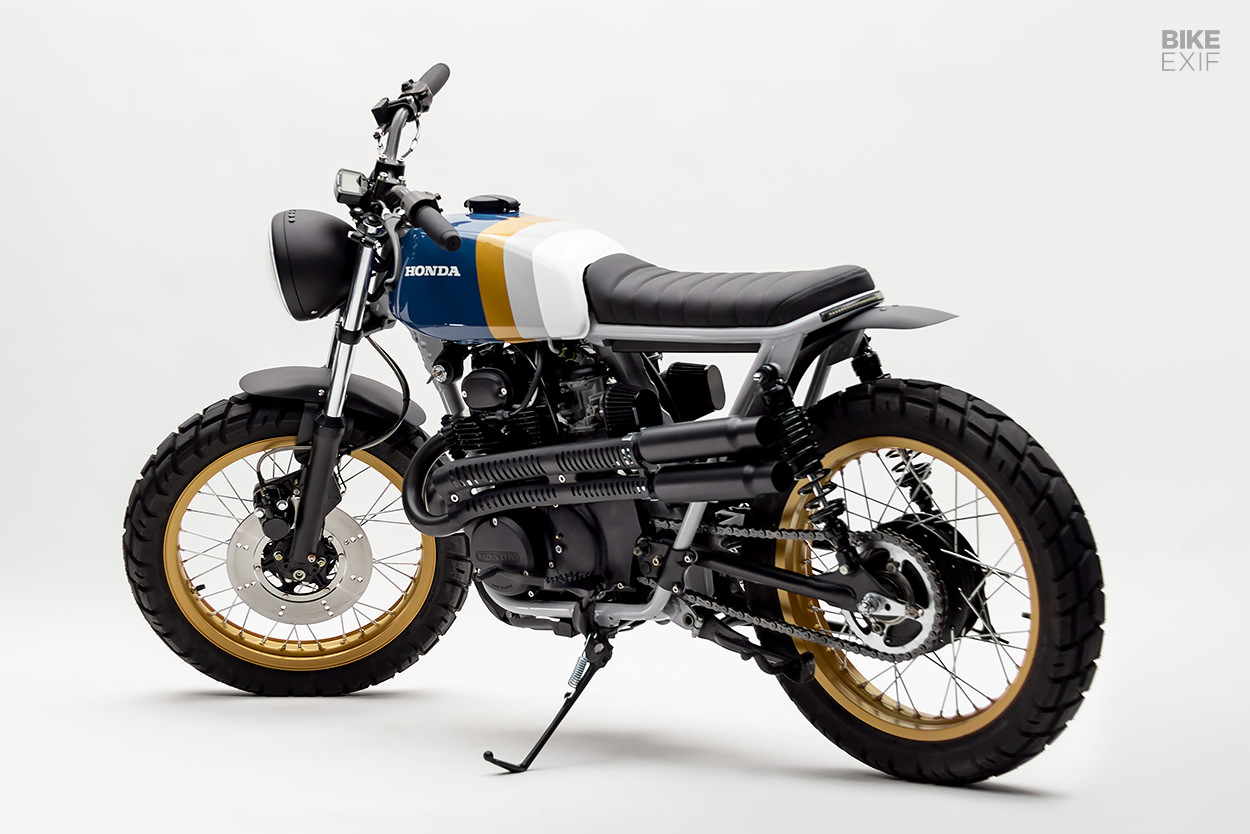 Slipstream also installed a new pair of aftermarket shocks, then swapped the front end for the forks and disc brake from a Honda CB360. It was a relatively simple swap, with some cleanup work around the yokes to suit the new speedo and headlight mounts.

Lower down are a set of 18” rims, wrapped in dual-sport rubber. 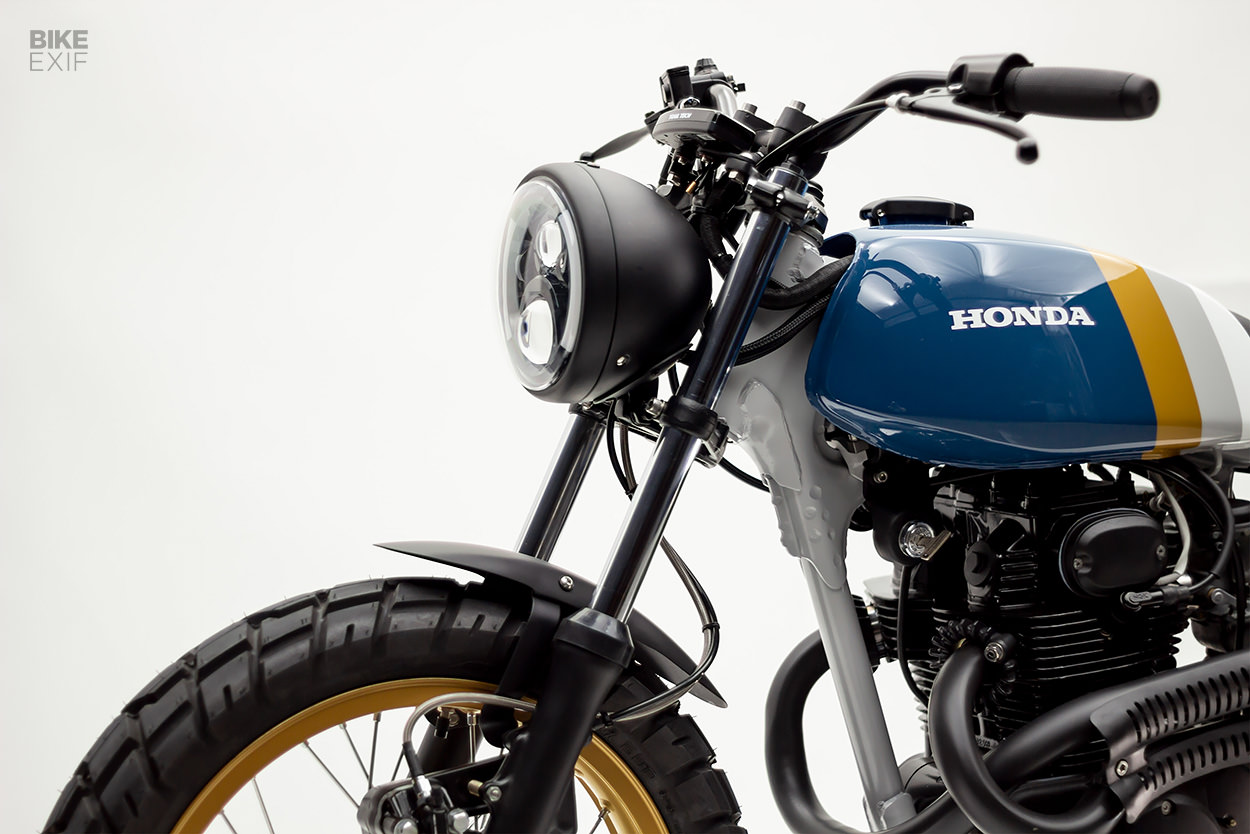 Remarkably, this CL350 still wears its original fuel tank. “It required a lot of massaging to straighten some massive dents,” says James.

It still has its OEM headlight bucket too, now fitted with an LED light with integrated turn signals. It also hosts a small array of LED idiot lights up top, which complement the ultra-slim Trail Tech Vapor dash. New handlebars and grips complete the cockpit. 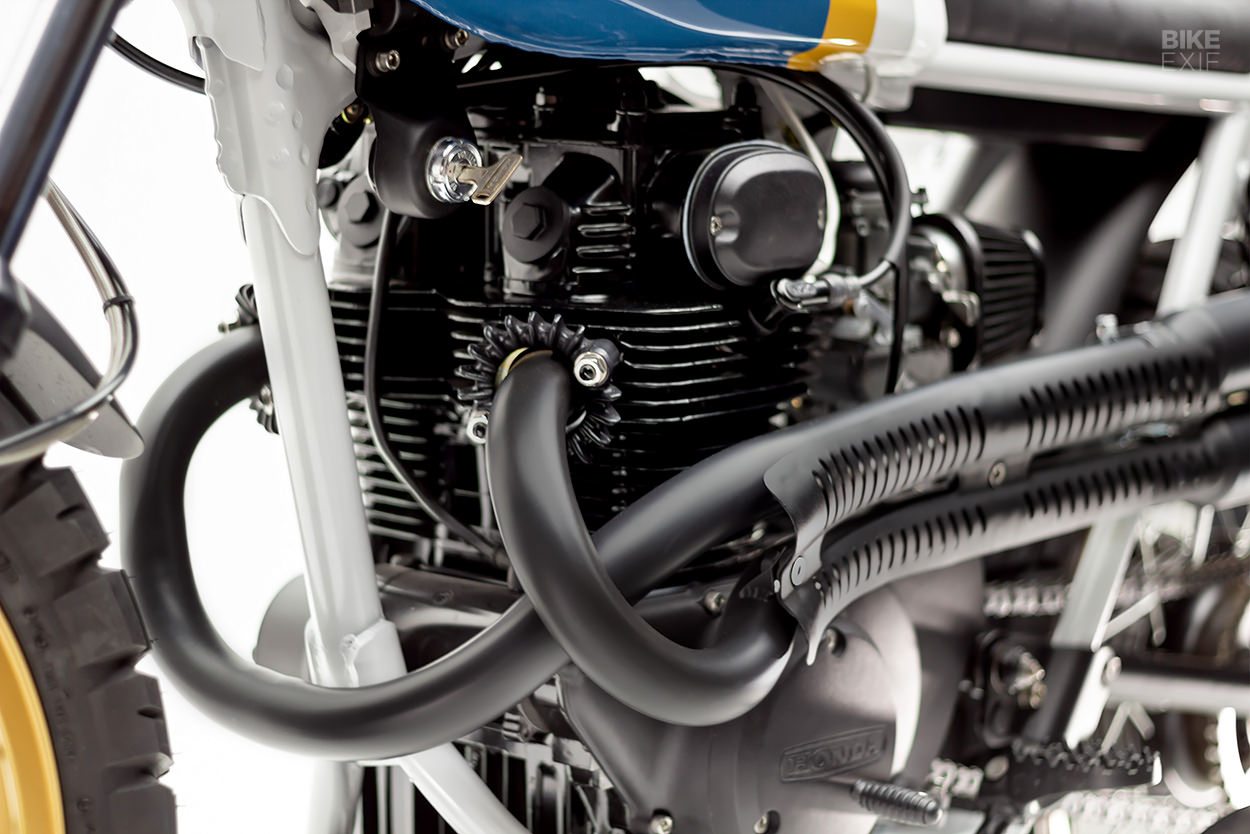 Given the healthy condition of the motor, it needed nothing more than a thorough service, with new gaskets and seals, to keep it ticking for another half century. “Our goal was never to turn this bike into a speed demon,” says James. “From a rider’s perspective, we still wanted the same fun and approachable experience that the CL350 had back in its day.”

The air box was ditched for a pair of pod filters, and the stock headers were capped off with a pair of off-the-shelf mufflers. Then the whole system was treated to a black Cerakote finish. 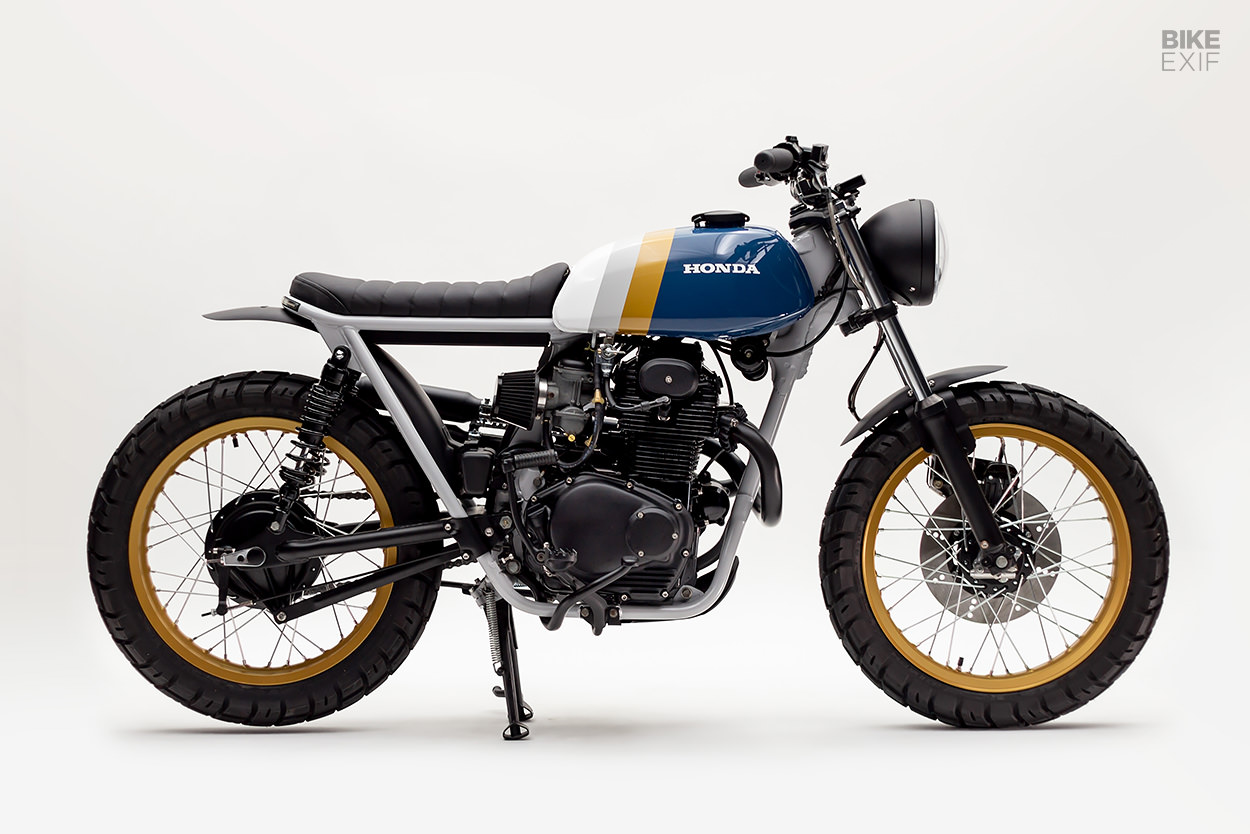 Then it was onto the CL350’s new livery. A coat of light grey on the frame, and gold on the rims, formed the basis for the rest of the color scheme. James is a stickler for details—so the stripes on the tank run parallel to the frame’s down tube, and are echoed in the stitching pattern on the seat.

Virtually everything else on the bike was finished in black, leaving this old Honda looking box fresh. And every last detail you see here was executed in-house, by Team Fawcett. 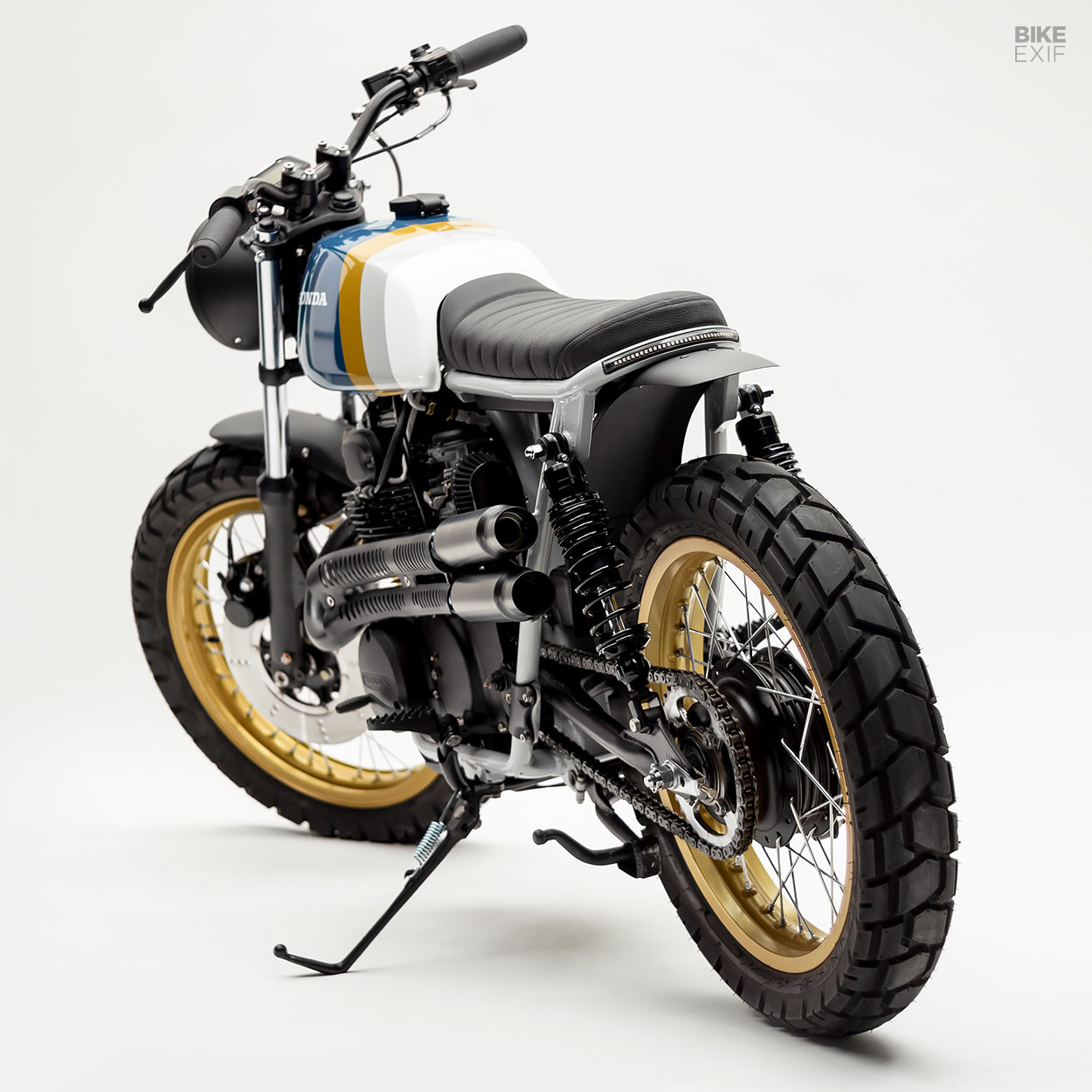 We have a soft spot for the Honda CL350 and would take a stock one home in a heartbeat. But Slipstream Creations make a strong case for tweaking the iconic scrambler.

Equal parts modern and classic, this tidy little restomod is about as good as it gets… especially when you consider how far it’s come. 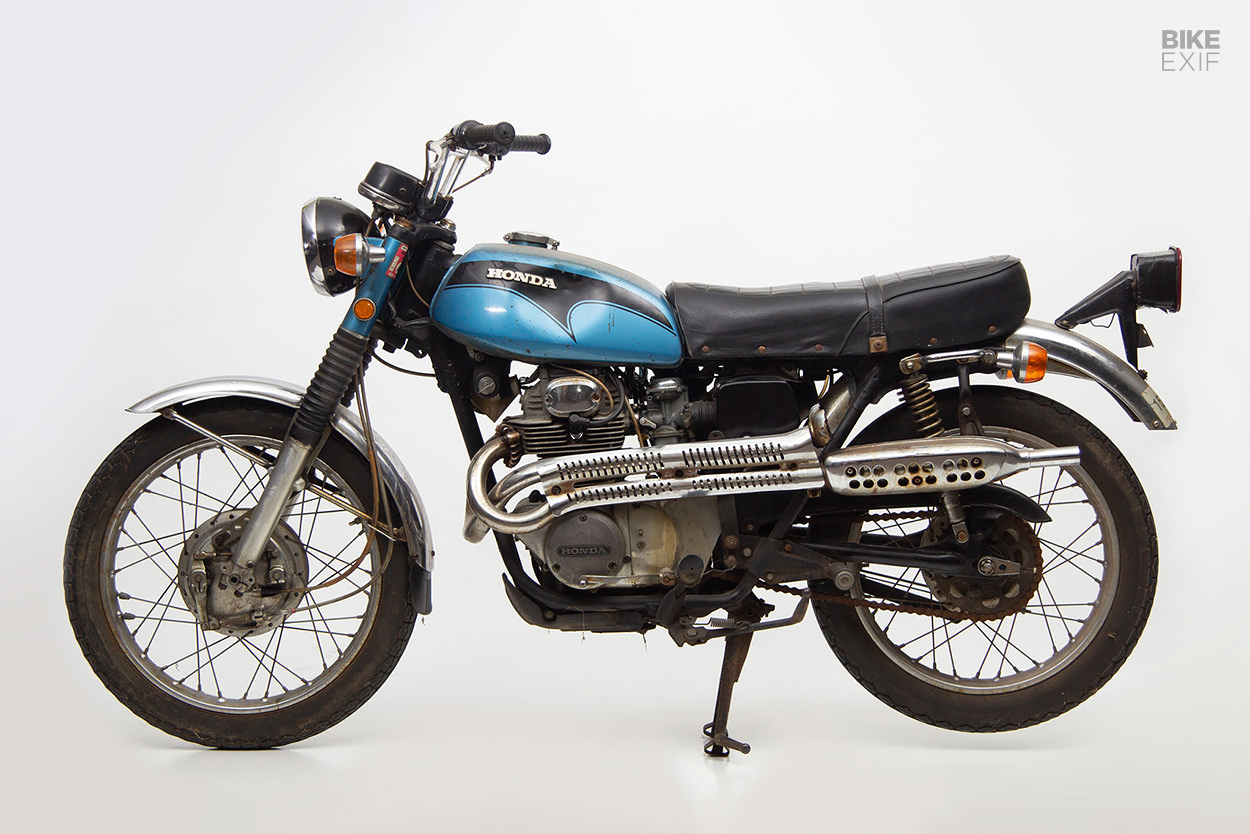