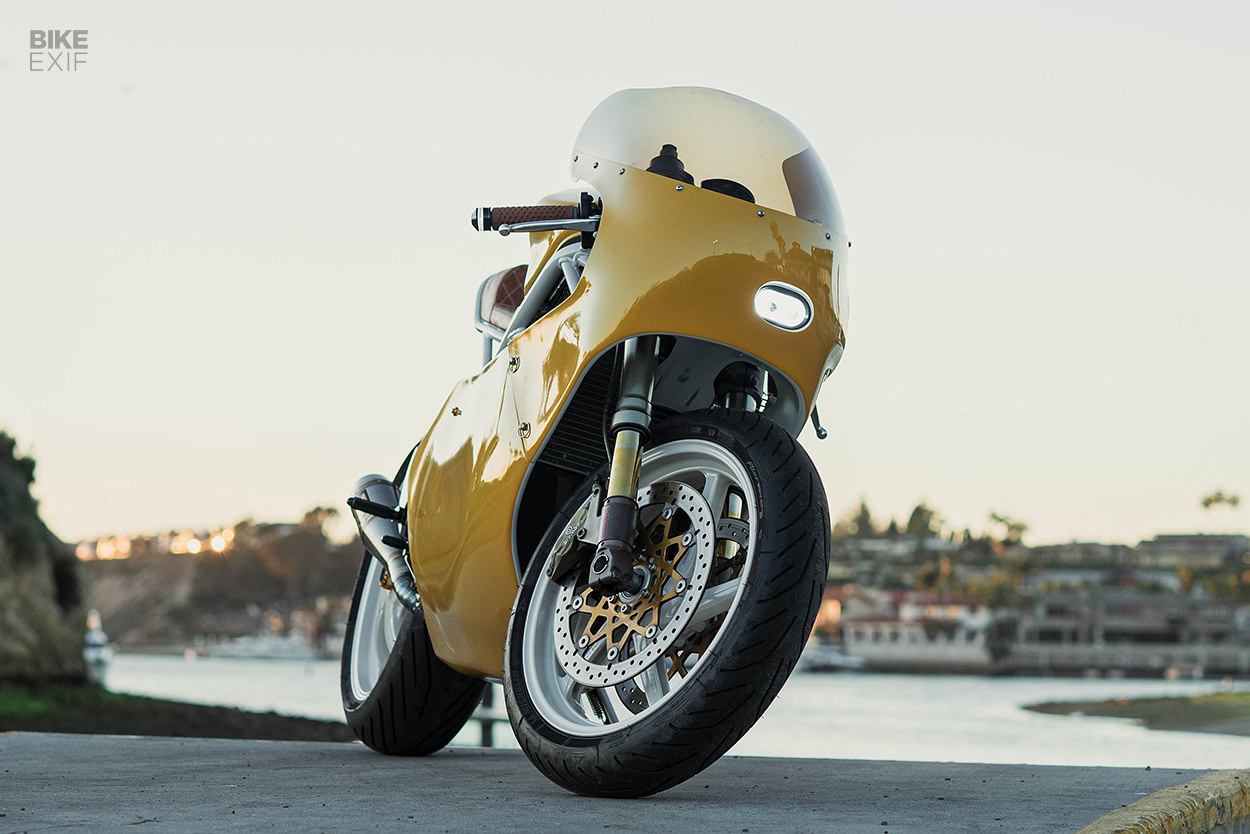 There are a few motorcycles in Ducati’s back catalog that would ruffle feathers if they were customized. Depending on how much of a purist you are, the 998 might just be one of them. It was the last model to carry the iconic 916’s aesthetic, but was powered by Ducati’s new, and much improved, Testastretta motor—making it kind of special.

Johhny Nguyen isn’t too fussed though. He’s a relatively young custom builder with a sharp eye and penchant for urban style, and isn’t afraid to buck tradition. He once built a Ducati 900 SS to match his BMX [below, left], and took inspiration from his favorite snowboarding sweater for the paint job on this eye-popping Ducati 998. 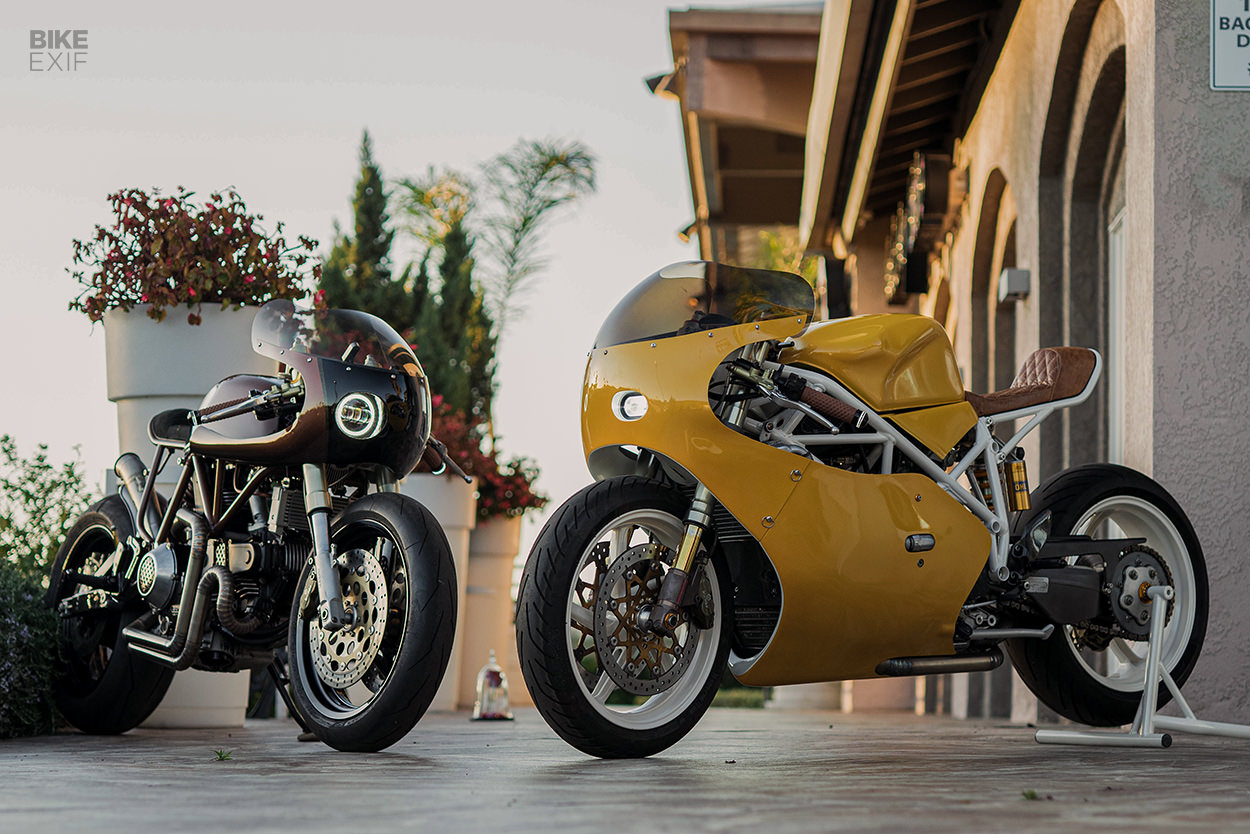 Johnny runs Upcycle Motor Garage part-time from his new workshop in Huntington Beach (he’s just moved there from Anaheim). He works alone most of the time, but friends regularly stop by to lend a hand. And since Upcycle is a hobby, Johnny’s more likely to build a bike to his taste and sell it later on, than take on commissioned work. 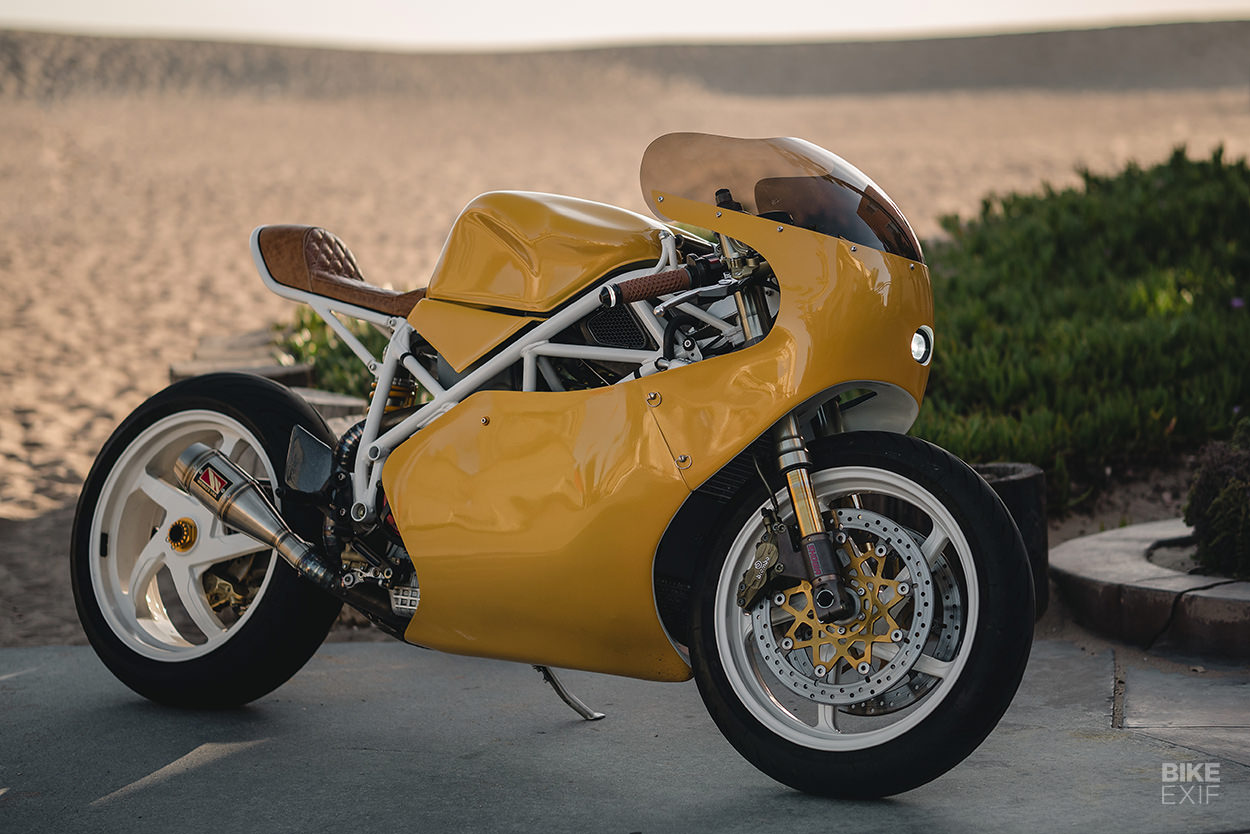 A friend had spotted it on Craigslist in mint condition, and nudged Johnny to buy it—which he did. After riding it around in stock form for a while, the urge to modify it took over.

With 123 hp on tap, Showa and Öhlins suspension, and Brembo brakes, Johnny wisely decided to leave the 998’s bones alone, opting for a cosmetic overhaul instead. That meant ditching half of the Ducati’s OEM bodywork, for the round fairing and stubby tail combo that’s fast becoming his signature. 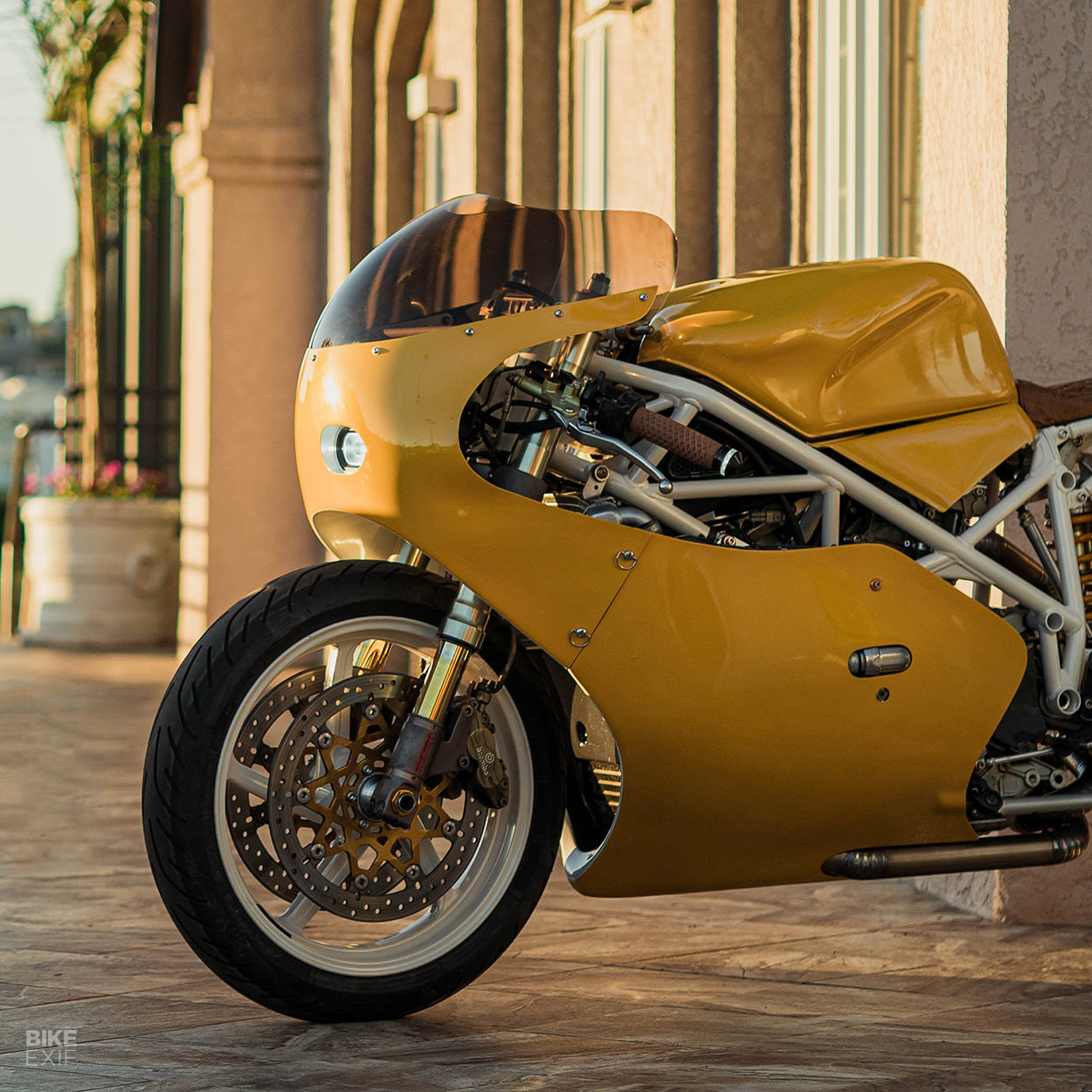 Johnny’s choice of fairing for the Ducati was inspired; he used a fiberglass Yamaha TZ250 part, made by Airtech Streamlining. Naturally it didn’t fit the 998 out the box, so he split it into a few sections, widened it out, and fiberglassed over the gaps to smooth it out.

The tiny front light is a twin LED unit, found at an off-road accessories shop. 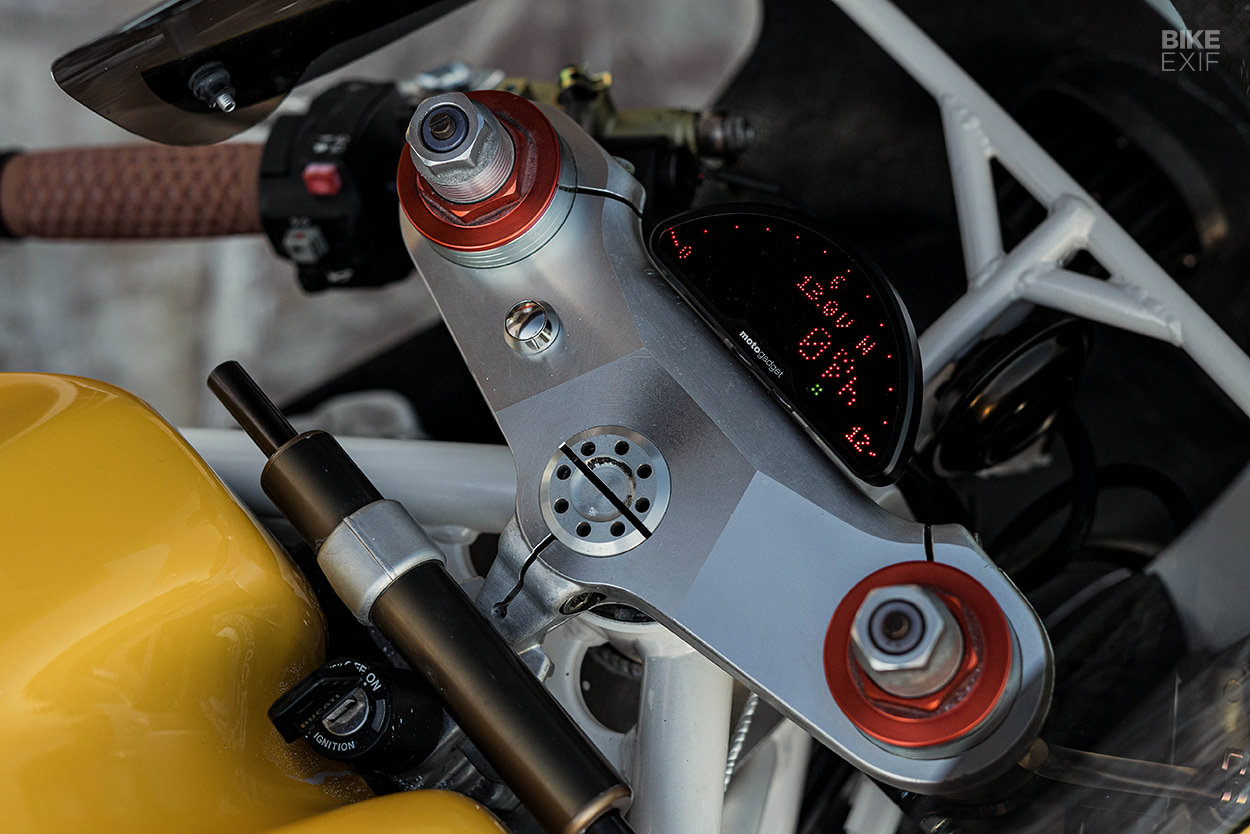 The fairing’s mounted on a small tubular structure, that Johnny fabricated to work with the frame’s stock mounting tabs. It also holds the air sensor and horn, and attaches to the fairing via the latter’s windscreen mounting bolts. A couple of quick release fasteners hold the bottom half of the fairing in place.

Part of the reason that Johnny chose a full fairing, was to help hide away the fuel injected 998’s mass of electronic bits. He kept the original battery tray but moved everything around, swiveled the ECU, and installed a small Antigravity Lithium-ion battery. 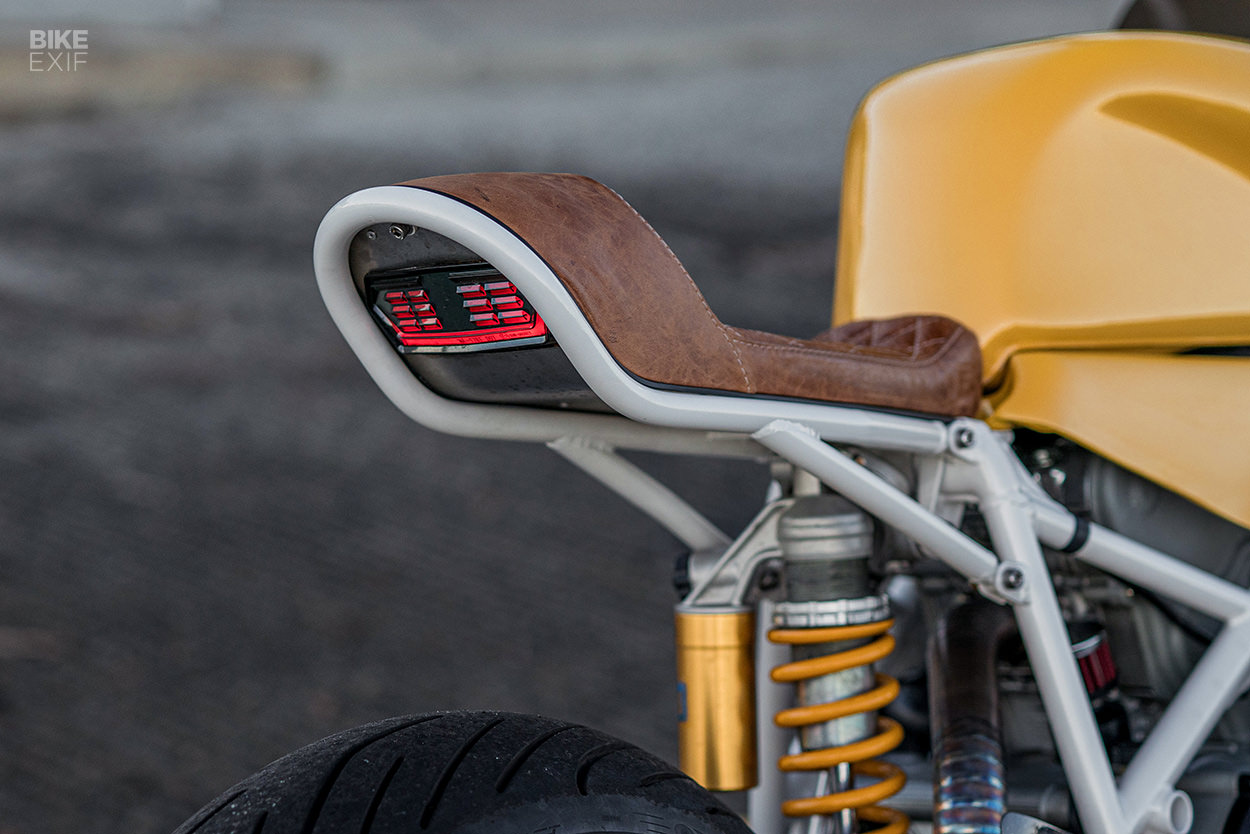 The 998’s original fuel tank is still in play, but the rear-end’s been drastically reworked. There’s a new, abbreviated bolt-on subframe with a sharp kick in the end, capped off with a brown leather seat. Peer around the back, and you’ll spot a flush-mounted aftermarket Honda Grom taillight.

Up in the cockpit, Johnny kept the stock switches and Brembo controls, but added Vans ‘waffle’ grips and bar-end LED turn signals, along with a sleek digital gauge from Motogadget. Further down, a set of pie-cut headers snake behind the fairing, and exit via a throaty-sounding Competition Werkes muffler. 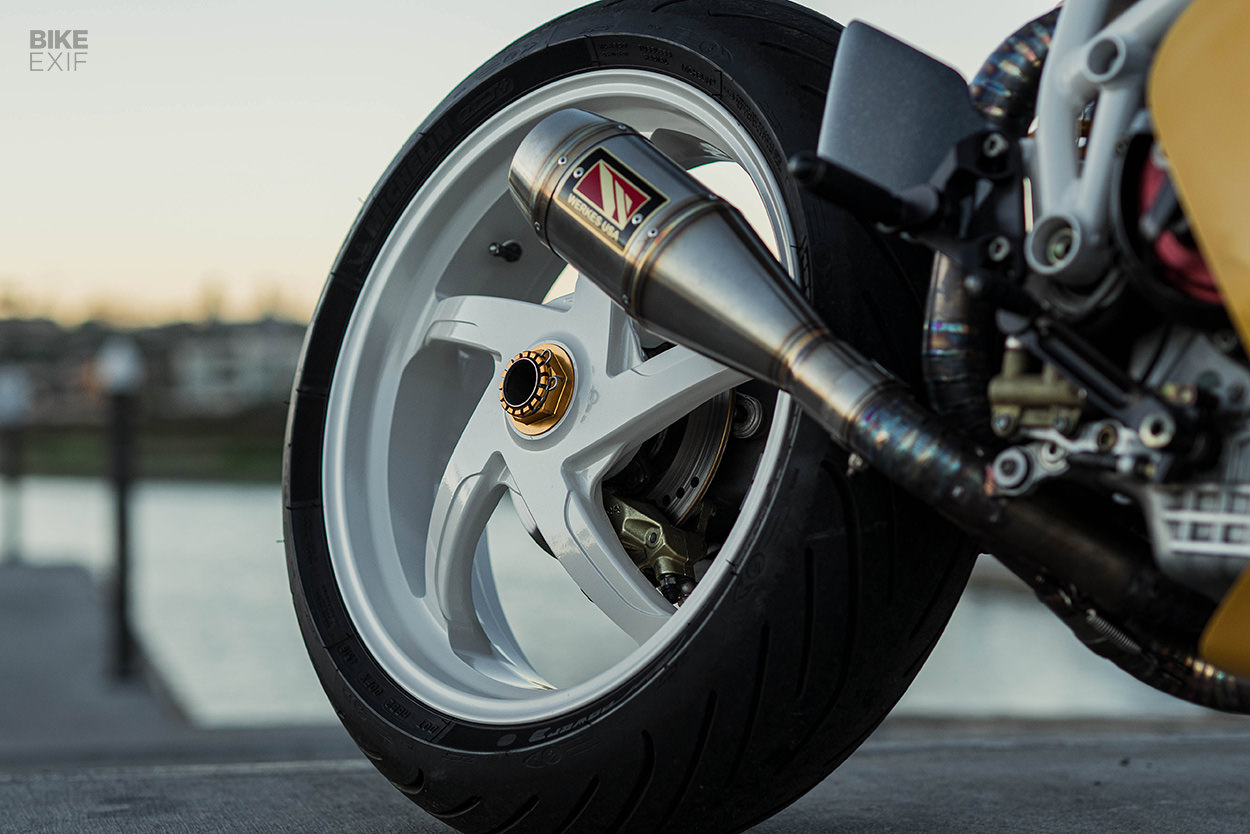 The final color scheme is both minimalist and bold: yellow paint with a white frame and wheels, and white accents inside the fairing. Johnny’s turned the 998 into a fresh neo-retro sportbike that’ll probably upset a few Ducatisti… but we’re into it. 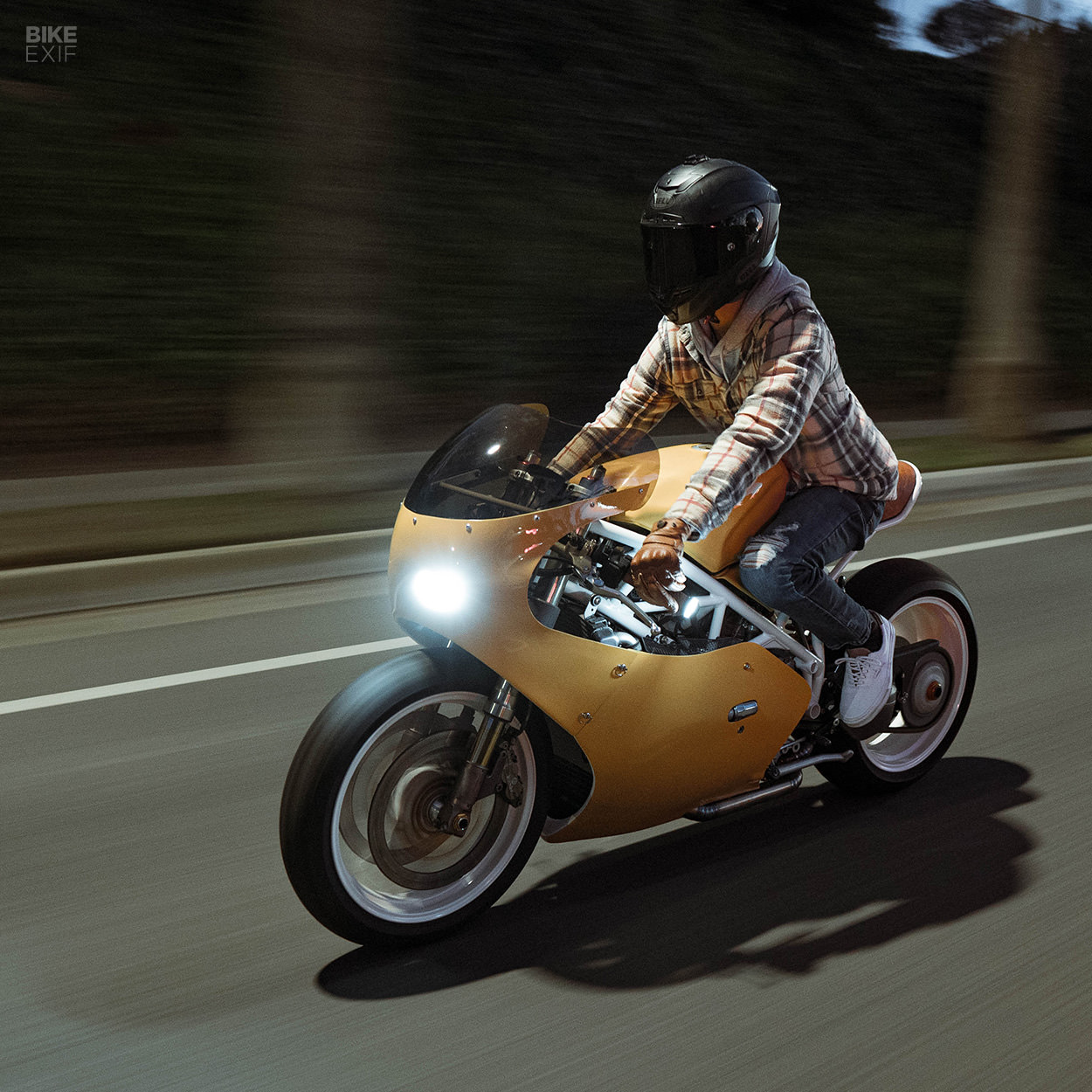