Ace Machine: A scratch-built bobber with a KTM 620 motor 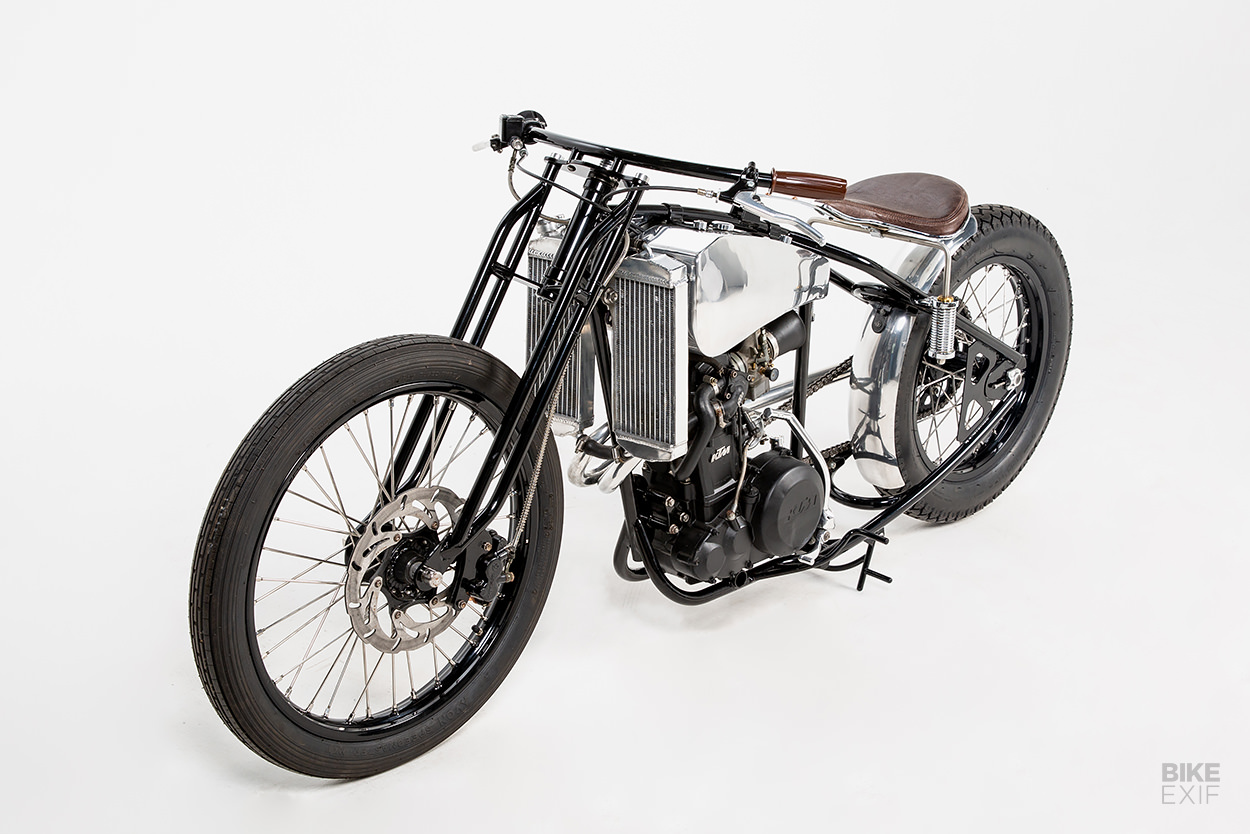 It takes a massive amount of imagination to look at a KTM enduro and envision a barebones bobber—and even more skill to make it happen. Luckily Edi Buffon has bucket loads of both.

Based in Sydney, Edi used to be an after-hours builder—until he quit his day job. “I’m now working part time,” he tells us. “Three days for the man, with the remaining four days dedicated to my humble bike building business.” 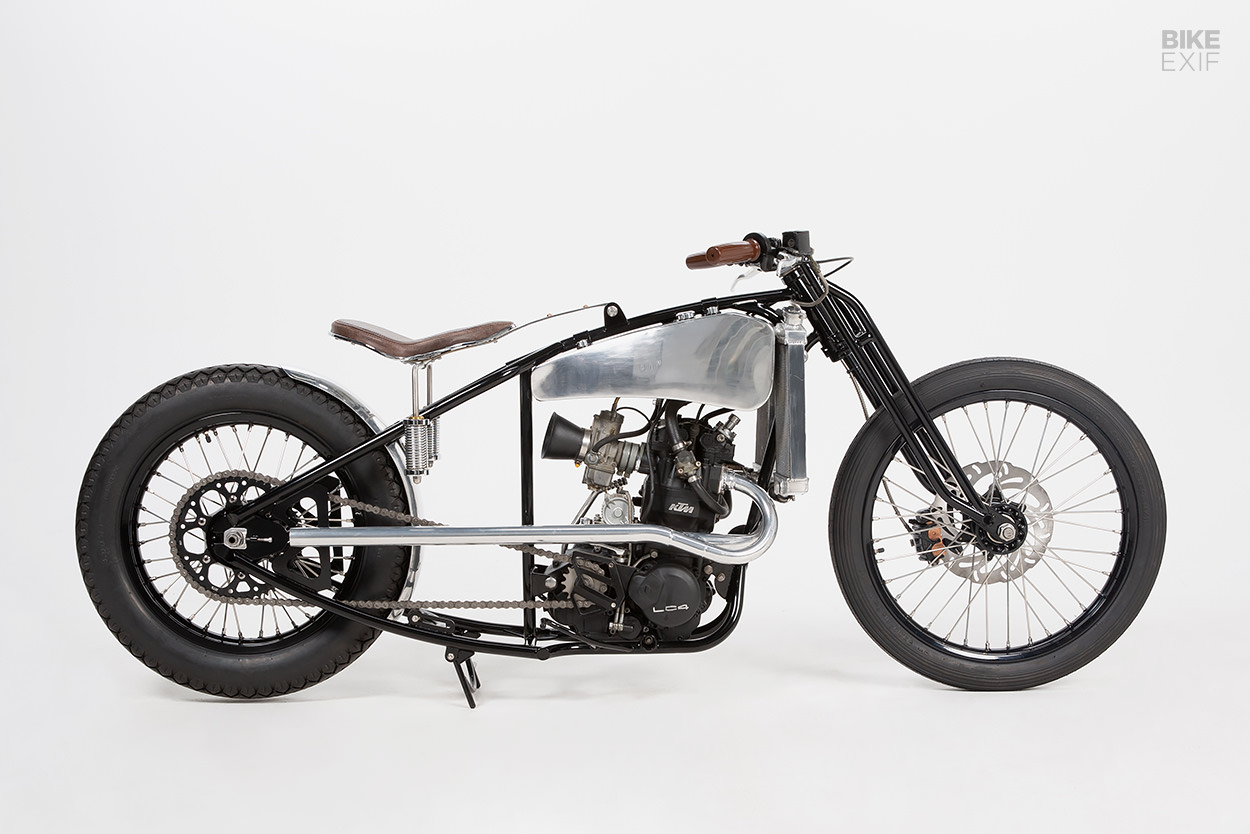 Working as Machine 1867, Edi’s creations are always ground-up builds that are incredible to look at, and probably a touch sketchy to ride. This particular one was inspired by the 1920s American-made Ace motorcycle. Edi had spotted an Ace in a vintage motorcycle book he was flipping through, and decided to pay homage to its rigid frame and front end, and spring-mounted seat design. 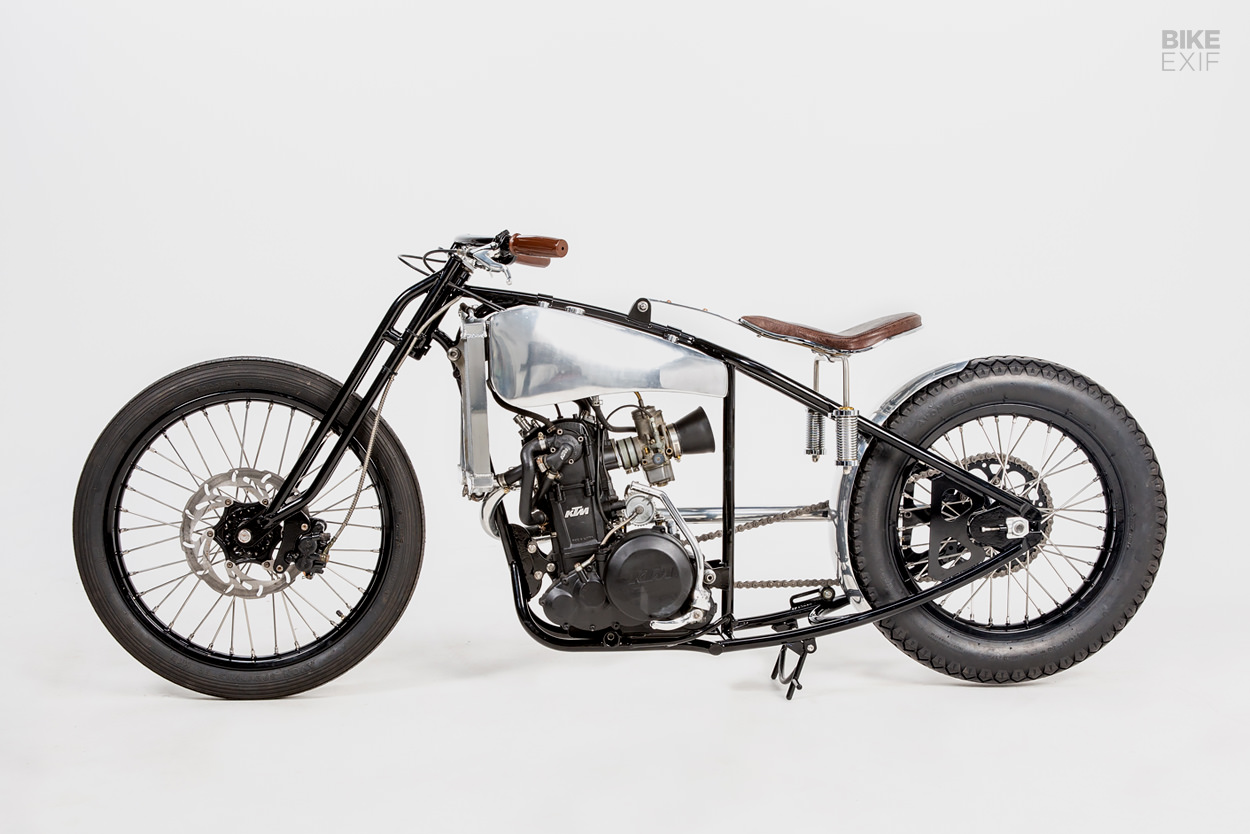 Edi found the donor bike while scouring the local classifieds; a 2000-model KTM 620 LC4 enduro, going for a song at a KTM dealership. “I thought I could do something with that motor, so I bought it,” he says. “I was working on another project at the time so it sat in the corner of my workshop collecting dust till I was ready.”

“I prepped the engine and tried to start it to see if there were any issues I needed to address. To my surprise it started on the third kick. With confidence that the low mileage motor was healthy, I began the tear down.” 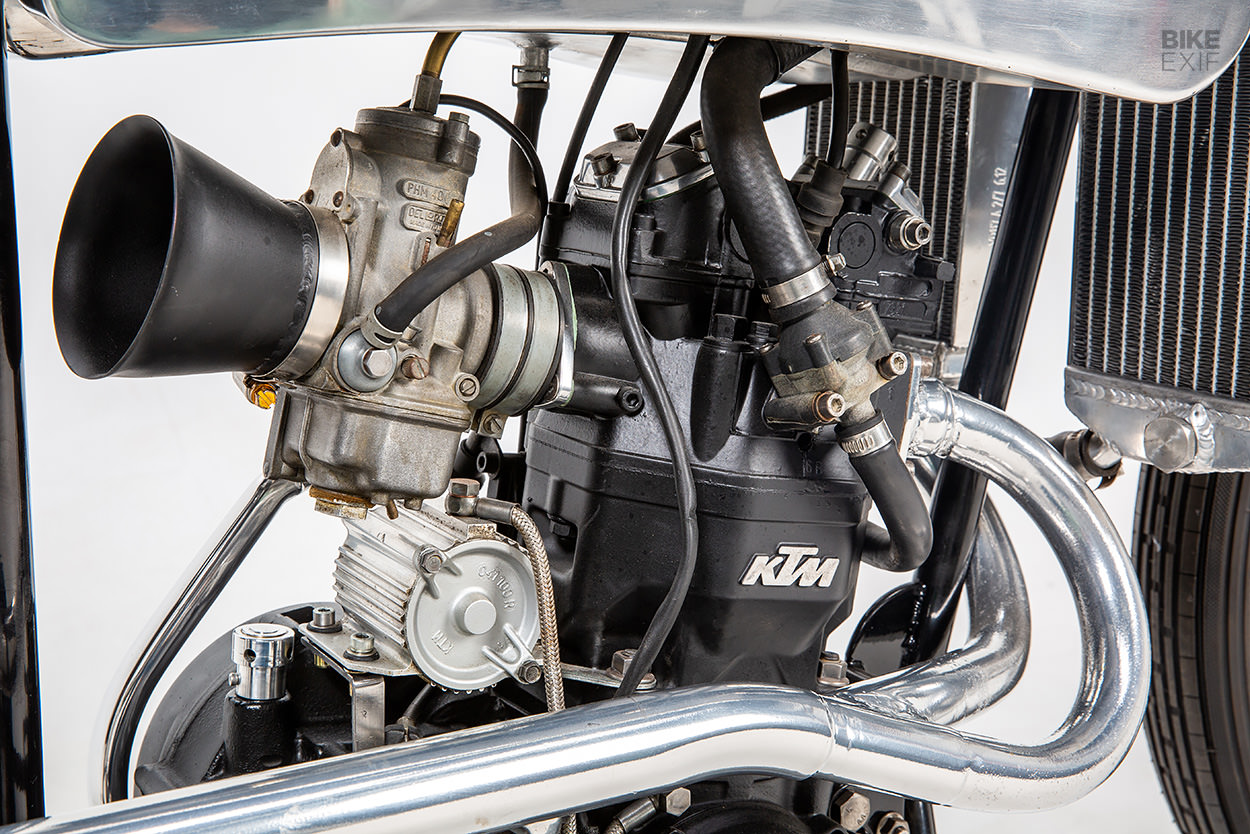 Edi pulled out the LC4 single-cylinder motor, then machined up a steering stem and placed it in his frame jig. Next, he started fabricating a rigid steel frame with a 35-degree rake and a 1,500 mm wheelbase—numbers he tells us he likes to work with.

With the main frame welded up, Edi turned his attention to the front end. “It had to be a rigid front end, just like the Ace that first inspired me,” he tells us. “This was a fairly simple process, and once completed looked the part.” 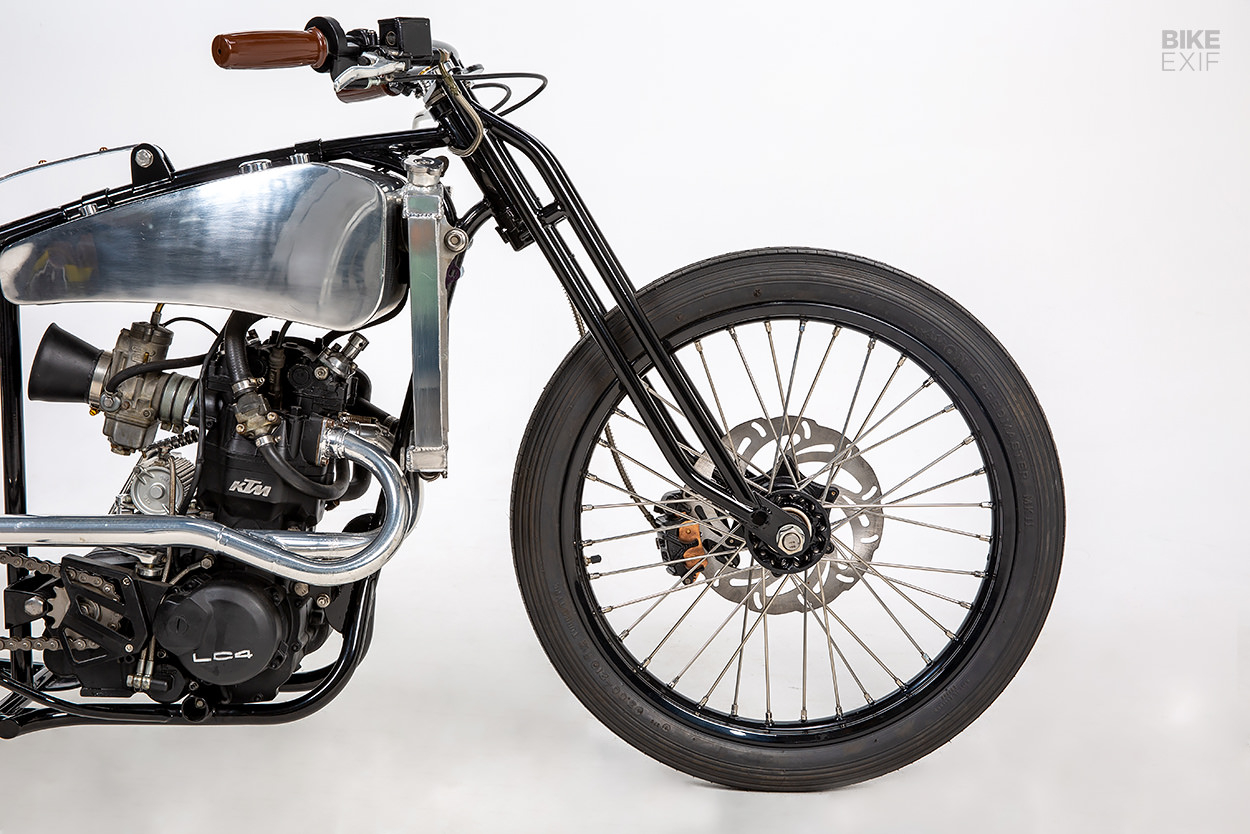 Everything was built around the KTM’s original 21F/18R wheels, which were powder coated black, re-laced with stainless steel spokes, and wrapped in Avon rubber. Since the KTM thumper is capable of 50+ hp, the bike needed some stopping power. So Edi has kept the original Brembo brake system … but only on the front wheel.

Steering is via a custom-built single radius handlebar—a design Edi favors on most of his builds. With no lights or electric starter on the bike, there’s precious little in the cockpit save for a pair of grips and levers. 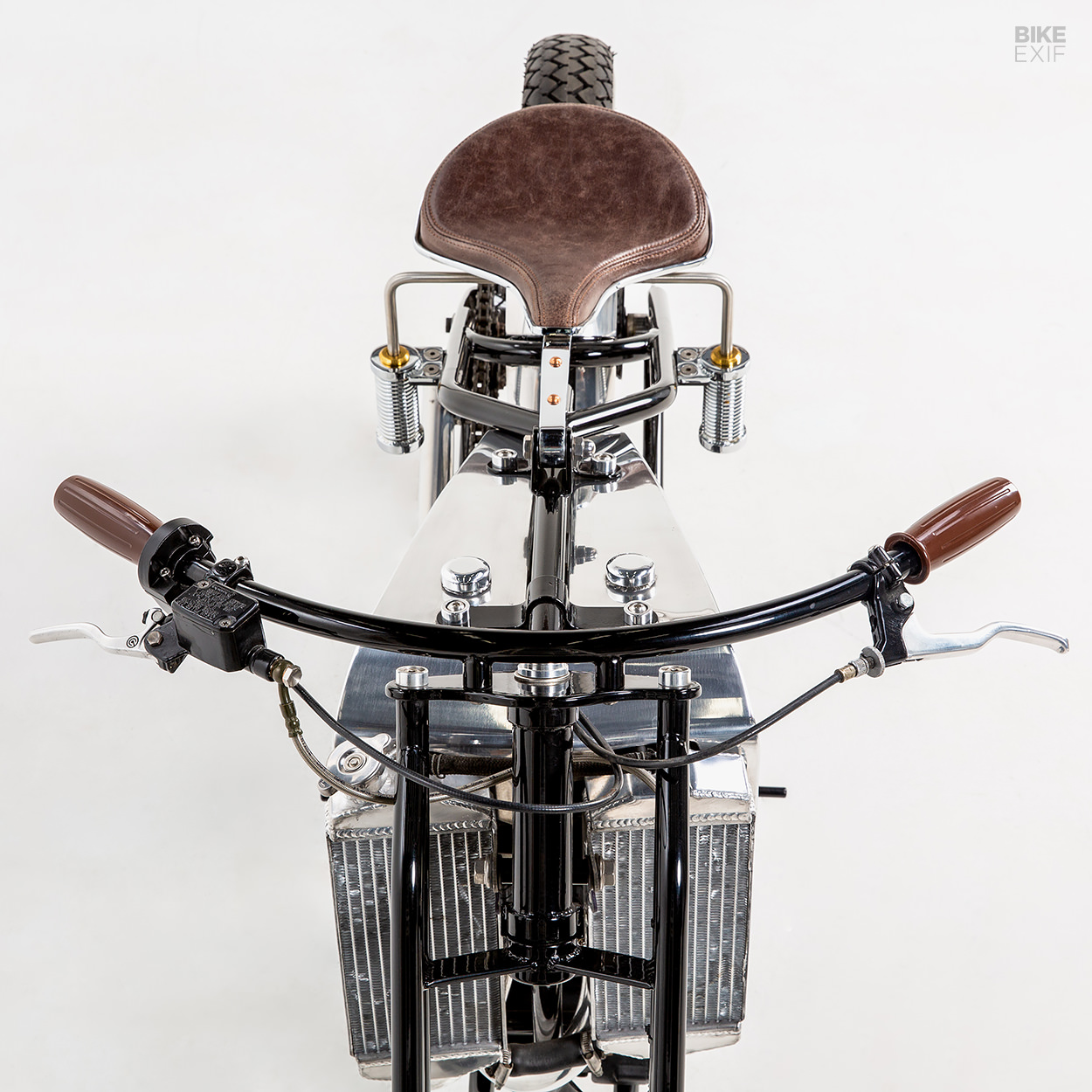 Edi normally only works with steel, but on this project he wanted to try shaping aluminum too. So he built twin aluminum ‘tanks’ for the KTM, mounting them lower than the frame’s line to expose the backbone, and emphasize the curvature between the wheels.

The left side holds fuel, while the right side houses the bike’s electrical components. “I disguised that by mounting fuel inlets to both tanks, to continue the vintage theme,” he reveals. “Oil would normally be housed in the secondary tank.” 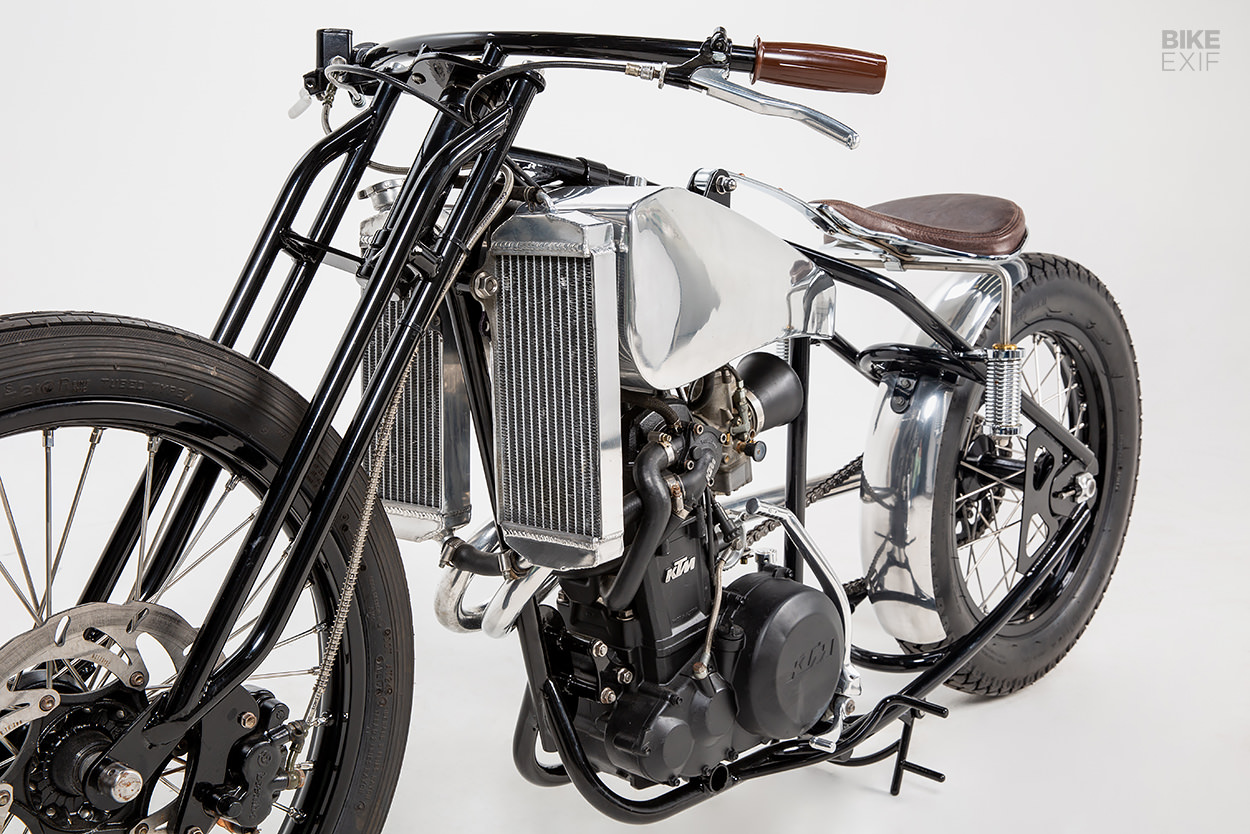 Despite the throwback vibe of the KTM, there was one glaringly modern component to deal with: the radiators. But since the whole premise of the project was to stick a water-cooled engine in a vintage bike, Edi decided to lean into it. So he bought a new pair of aluminum radiators, and mounted them proudly at the front of the bike.

“An aesthetic risk, I thought,” he says. “But sometimes you need to be brave, and I think it works quite well with the theme of the bike.” 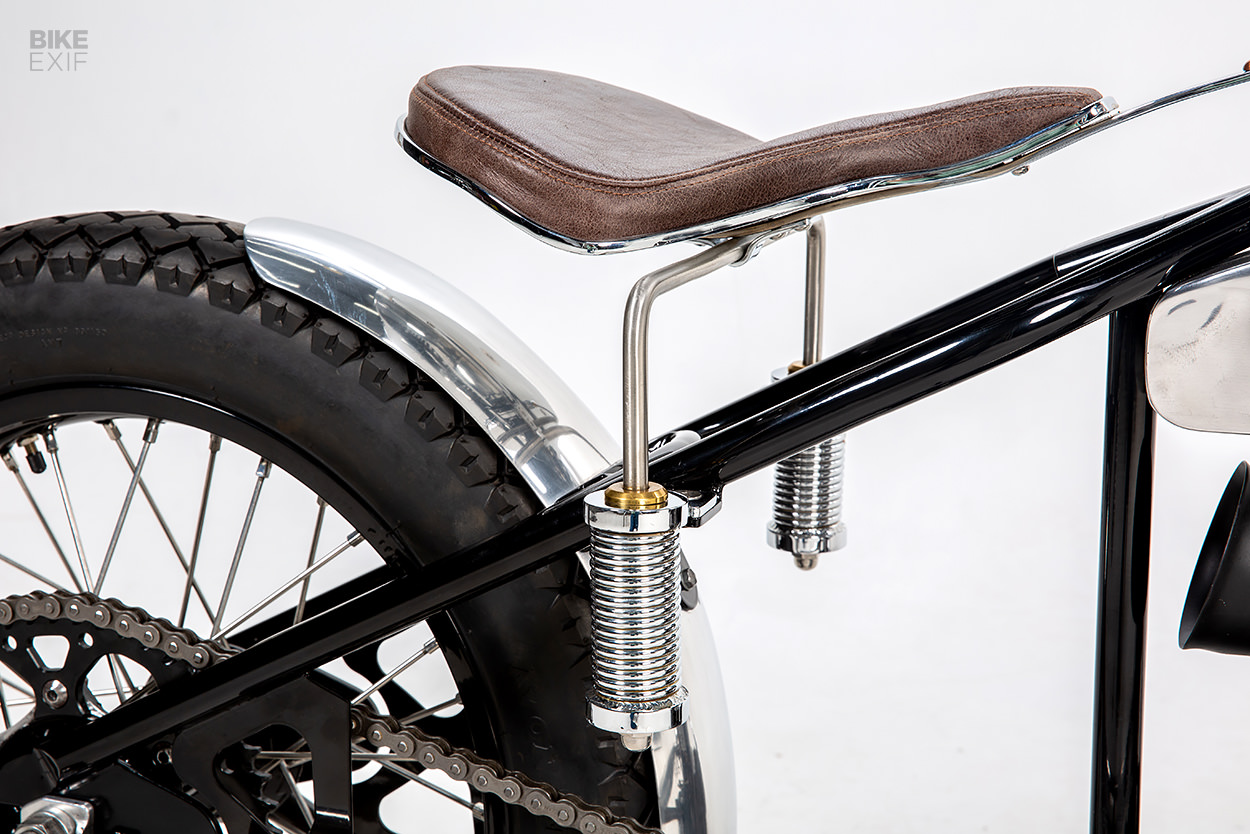 The last item on the list was the KTM’s seat. Taking one more cue from the Ace that inspired this build, Edi sourced some springs and started machining up parts. The final setup uses mild steel, stainless steel and brass, plus a hint of chrome—and a touch of aged brown leather from the upholsterer to finish it off.

The frame went off for a layer of black powder coating to highlight all the fabricated metal. With the engine back in and every last fastener torqued and thread-locked, it was time to kick it to life. All it took was a few kicks, and the KTM was soon howling through its baffle-less exhaust. 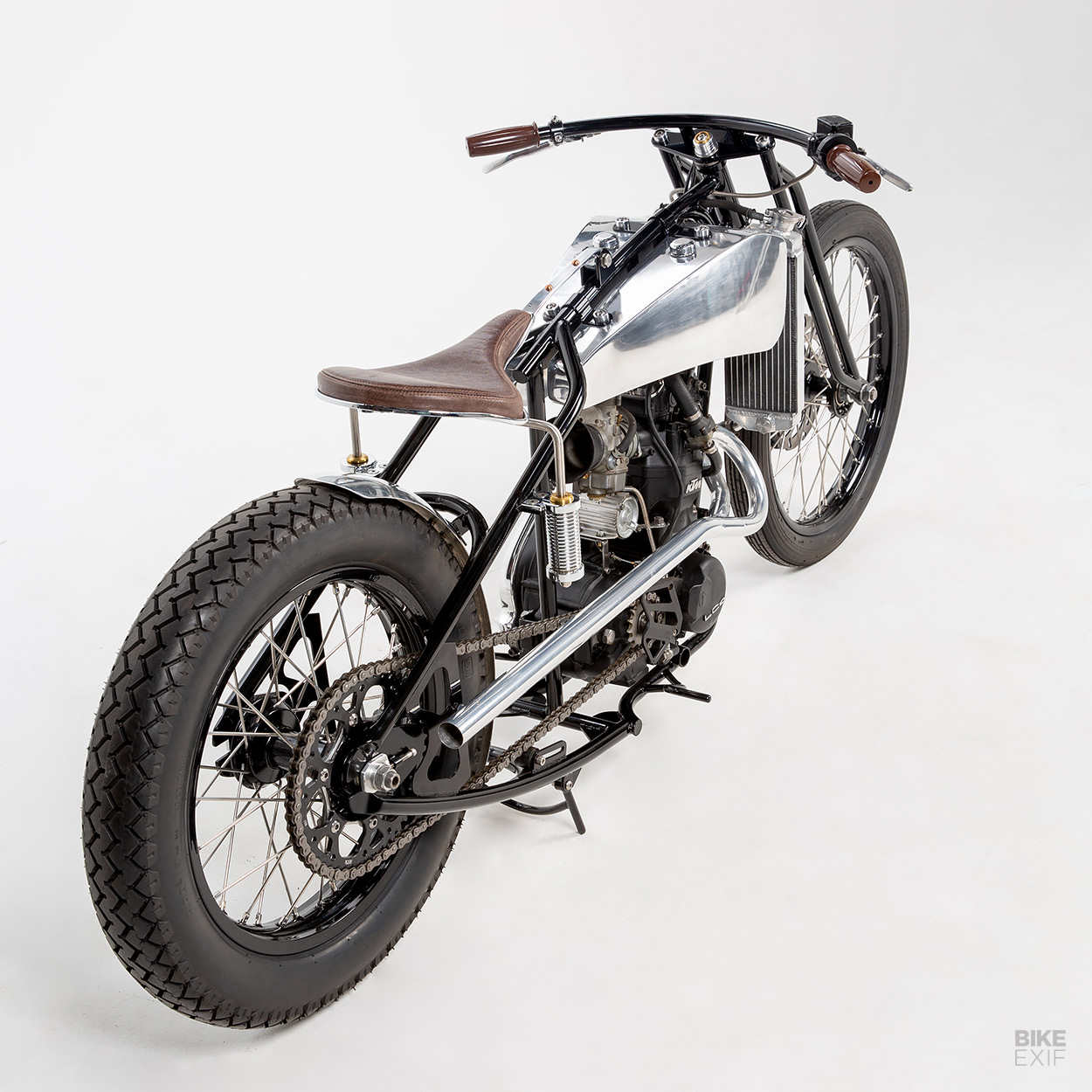 Surprisingly, Edi rates this as one of his easier builds, because it doesn’t have some of the complex components that his previous bikes do—like hand shifters and heel brakes.

“The reassembly of this bike was the easiest and most pleasurable so far, perhaps due to the simplistic approach,” he quips. “Now it’s time to get busy with an over the top, challenging and frustrating new build!” 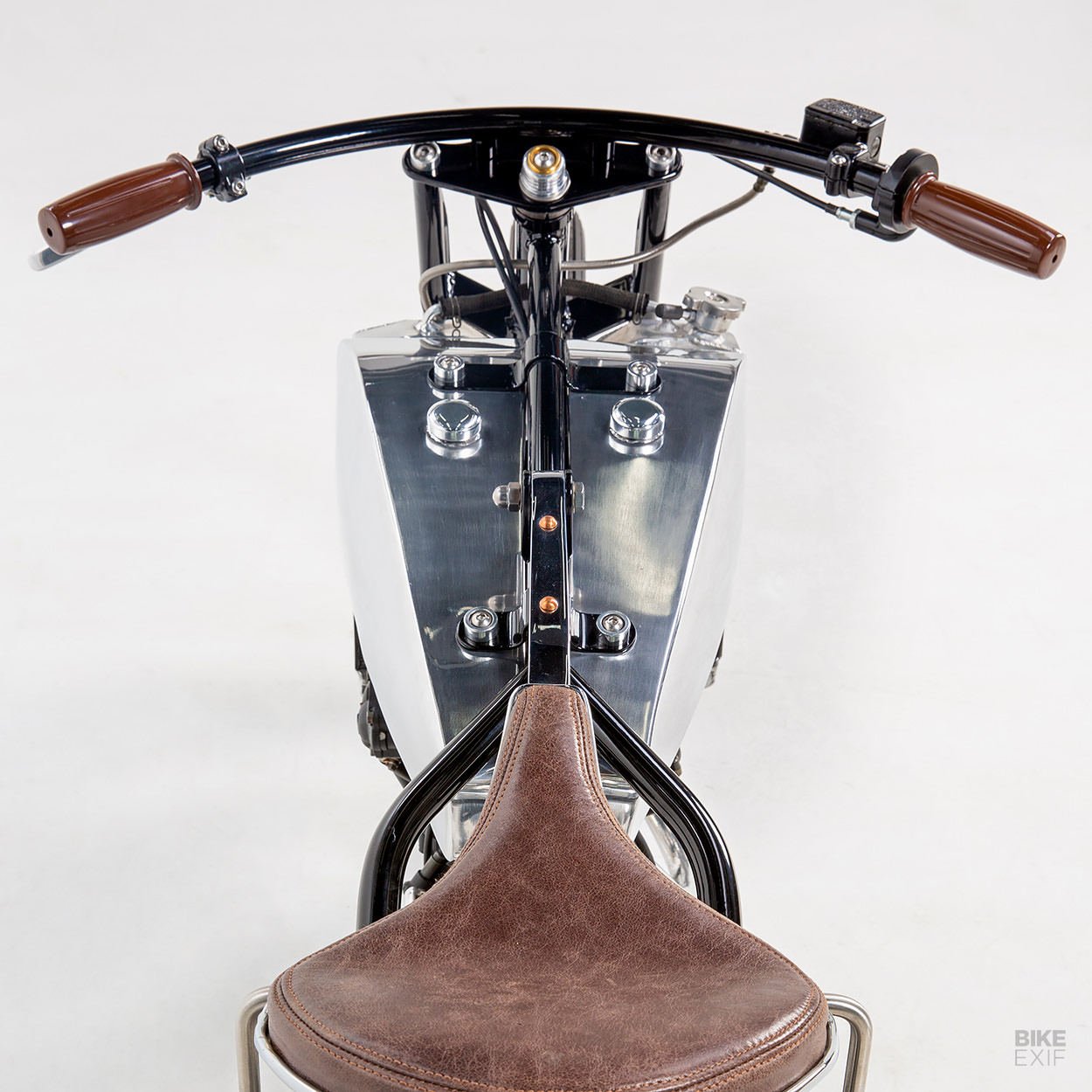