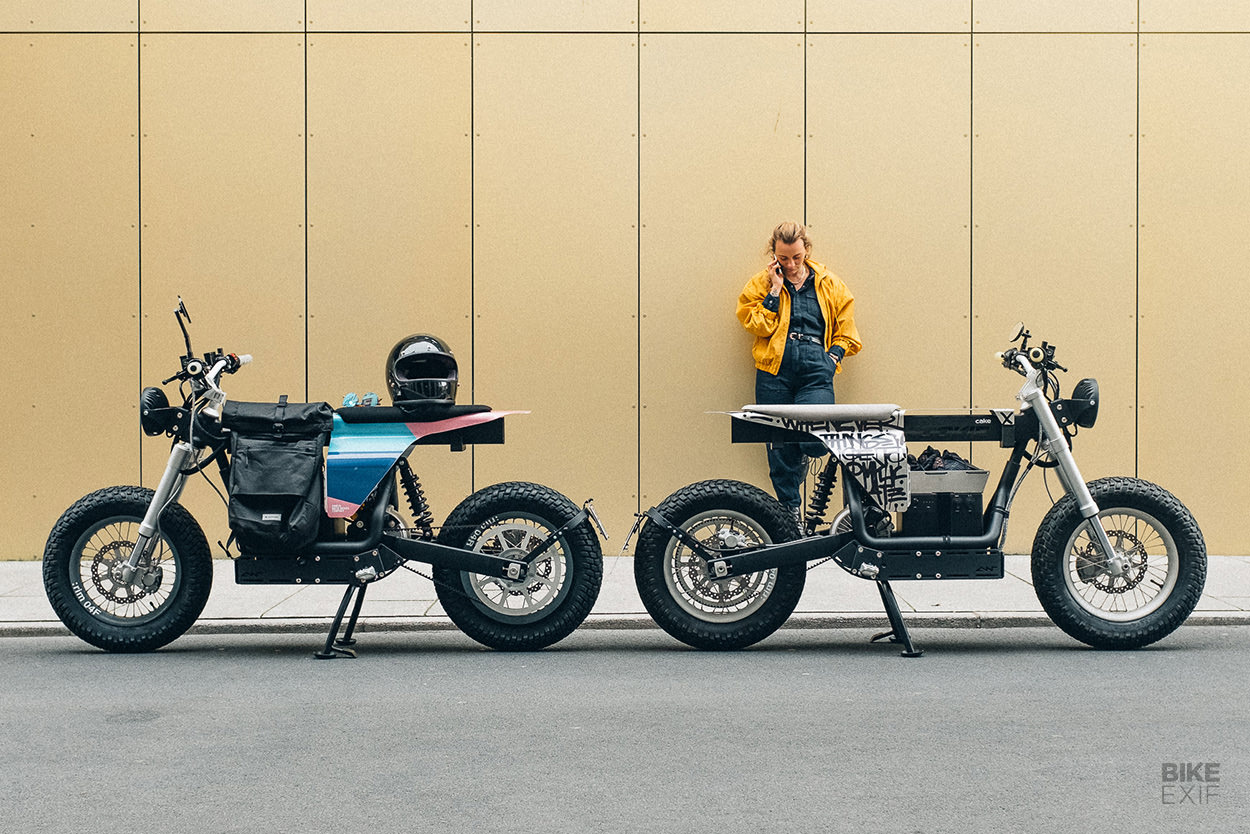 The compact and modular nature of electric drivetrains makes them well suited to small utility motorcycles. But surprisingly few manufacturers have jumped on this bandwagon. Two names spring to mind: UBCO in New Zealand, and the premium Swedish electric bike brand, Cake.

Cake’s delightfully quirky Ösa is a $9,500 electric utility bike that can be configured with a vast array of accessories, like luggage carriers, cargo racks and even a trailer. But despite the endless setup possibilities, the crew at Hookie Co. in Dresden saw potential for more. 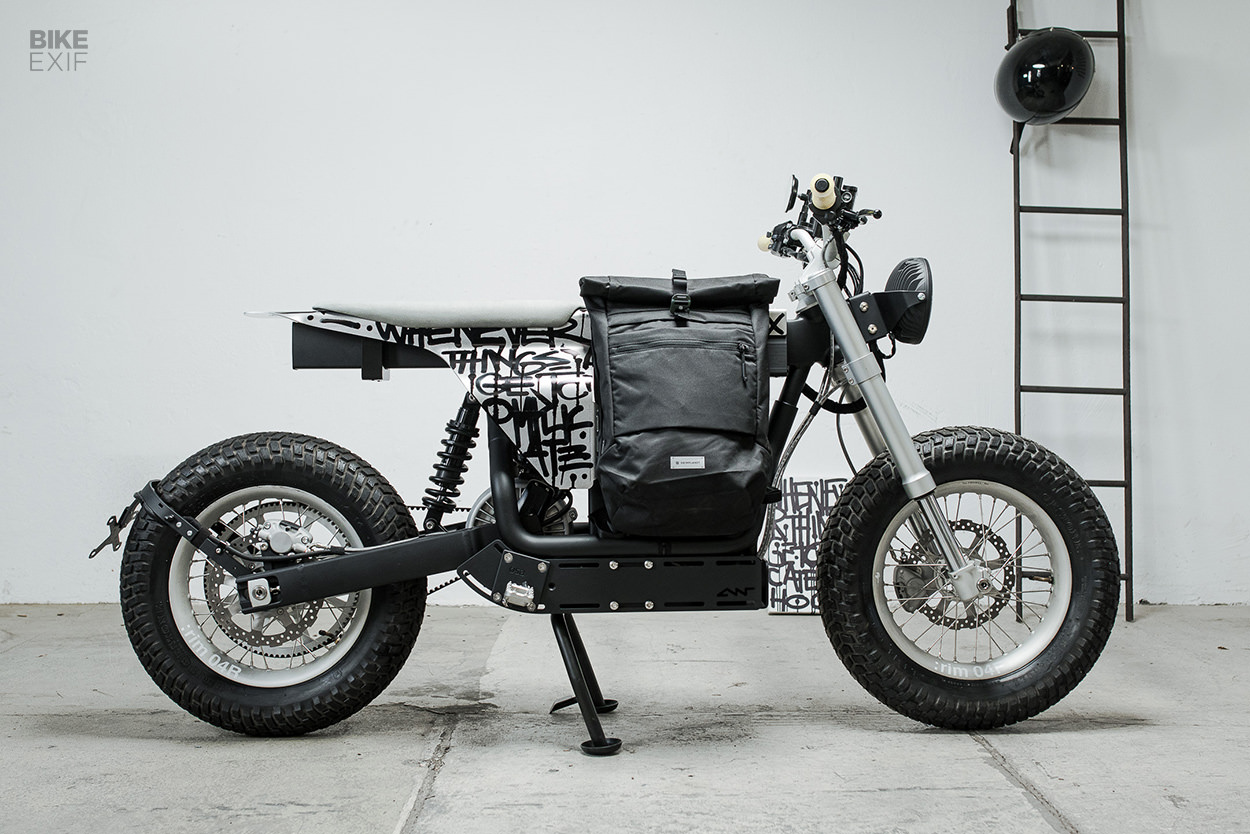 The team bought a pair of Ösas for the shop last year: an Ösa+ and an Ösa lite. The Ösa+ has a 10 kW motor that’s good for a top speed of 90 km/h and a city range of 84 km. The cheaper Ösa lite’s 4 kW motor can only manage 45 km/h, but bumps up the city range to 92 km. Both bikes share the same chassis.

After putting enough miles into their Ösas to figure out what their specific needs were, Hookie started throwing concepts around.

The idea was to retain the bike’s modular nature, but tailor it to their own style. And make it look a whole lot radder in the process.

“The briefing was clear to not build an Ösa that looks like a motorcycle,” says Hookie founder, Nico Müller. “We didn’t want to add a fake fuel tank or fake pipes. We wanted to give the Ösa more a sporty, young and an arty look.” 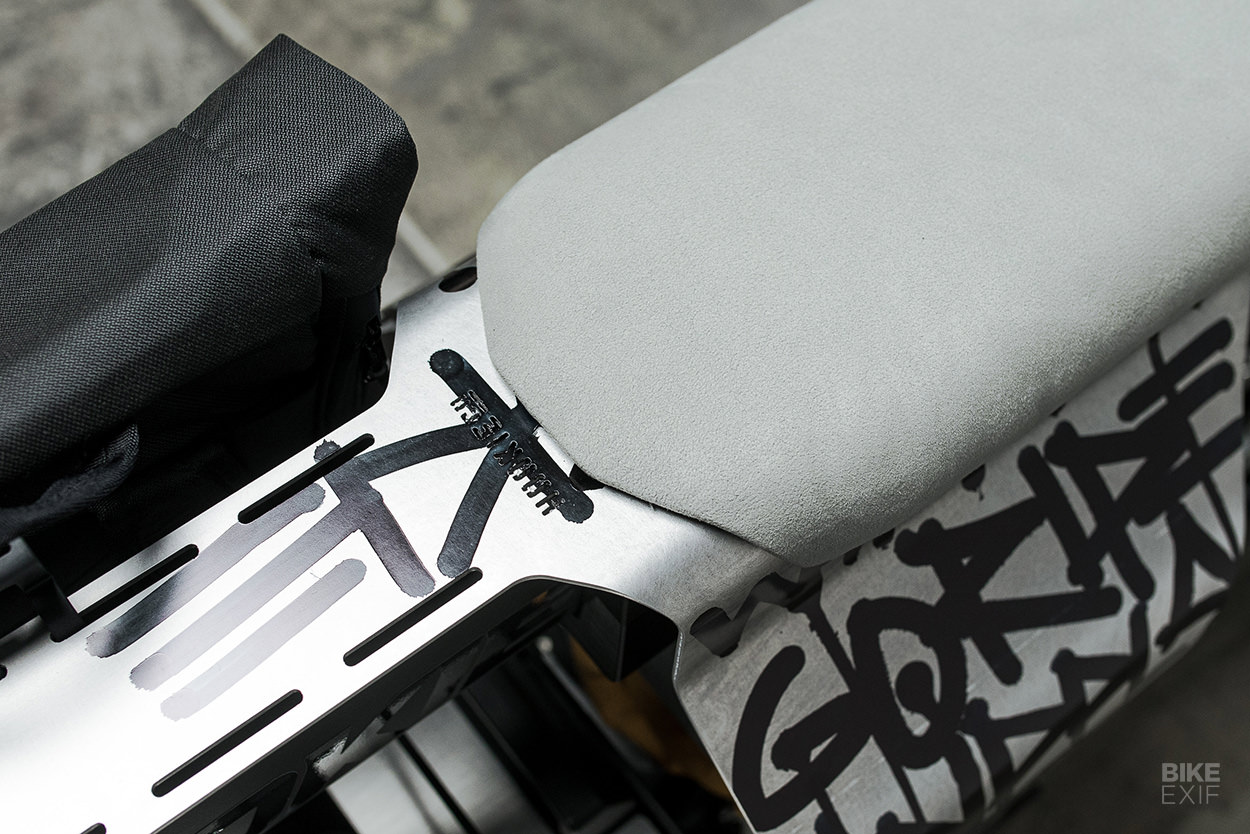 The Ösa’s main frame backbone acts as an anchor point for its accessories, so Hookie decided to exploit this. They designed a new aluminum body panel to sit on the frame and wrap around it, then 3D printed brackets to attach it to the backbone.

The new bodywork has a big impact on the Ösa’s aesthetics, and creates a canvas to add color or art. But the front part of the bodywork also adds an extra hit of modularity, by providing discreet attachment points for a pair of bags from the German outdoor brand Heimplanet. 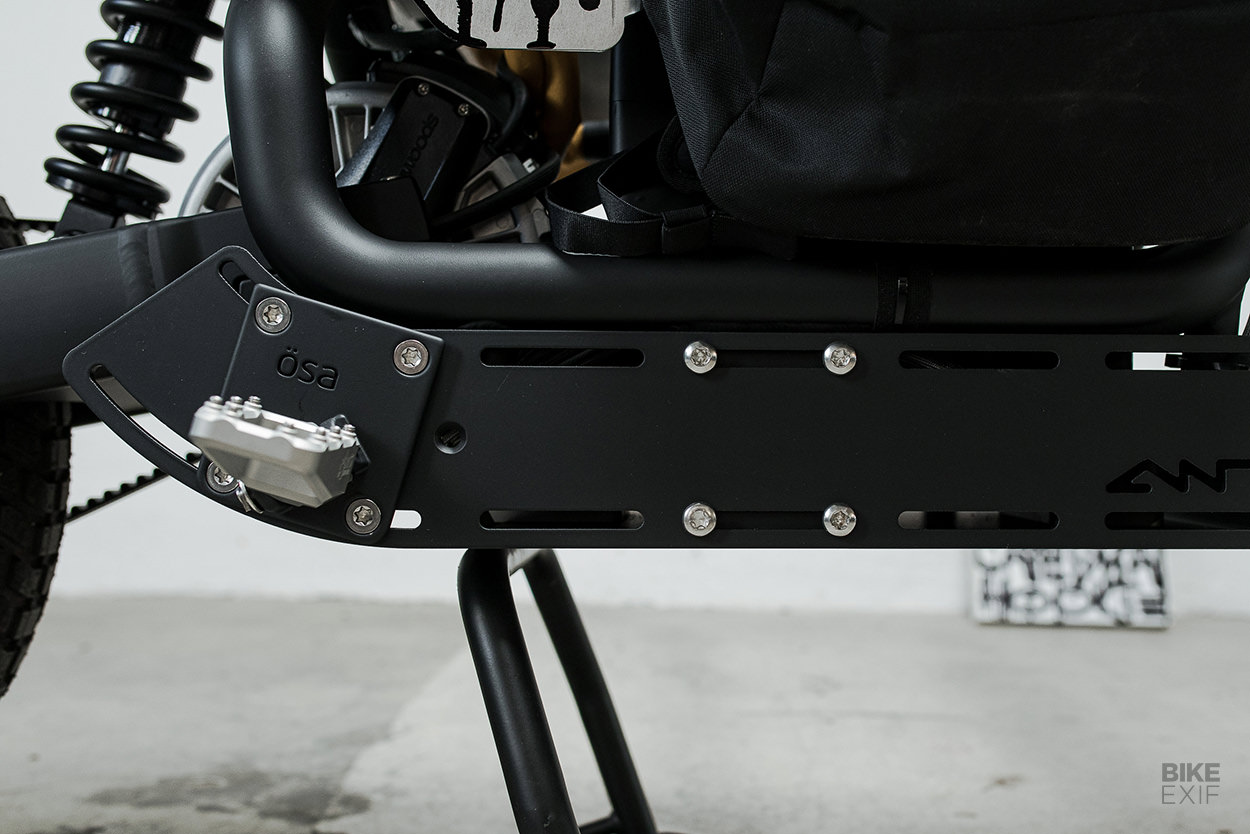 Hookie has tweaked the Ösa’s ergonomics too, with a clever adjustment system for the footpegs. The OEM pegs are now mounted on a pair of movable plates, which in turn bolt to custom-made backing plates, attached to the bottom of the frame.

The new saddle is long enough for the rider to shift forward and backwards on, and can take a passenger in a pinch. Covered in Alcantara, it’s also slimmer than the stock unit, which brings the seat height down. 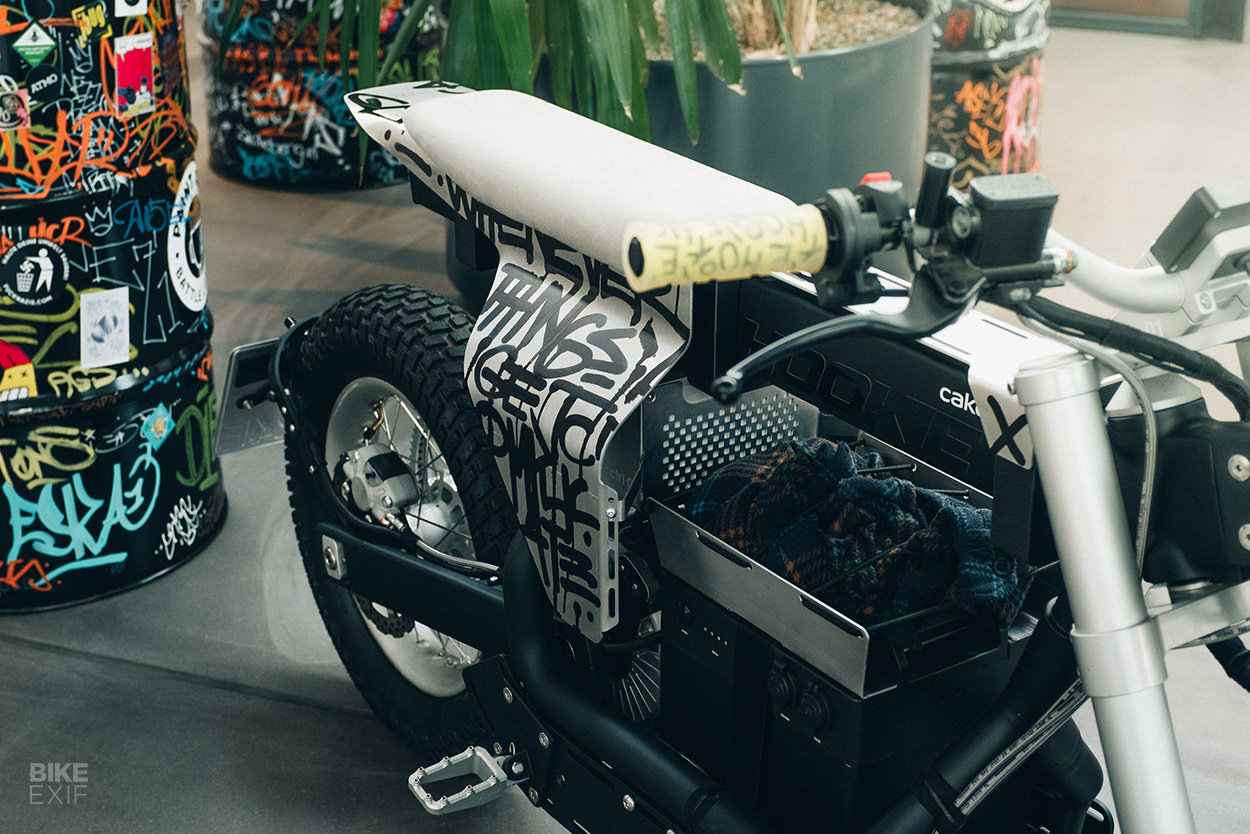 Sitting on top of the battery is another custom add-on: a cargo basket that’s held in place by the bike’s battery strap. It consists of an aluminum body, with a tough elastic band running across the top to keep goods in place.

Up front, Hookie unbolted the Ösa’s original headlight, and bolted on a custom-made bracket to hold a Koso Thunderbolt LED headlight. They also installed their Frozen grips, new mirrors, and their Rapid LED turn signals, mounted stealthily to the handlebars. Out back is a custom frame ‘cap,’ with two LED taillights embedded into it. 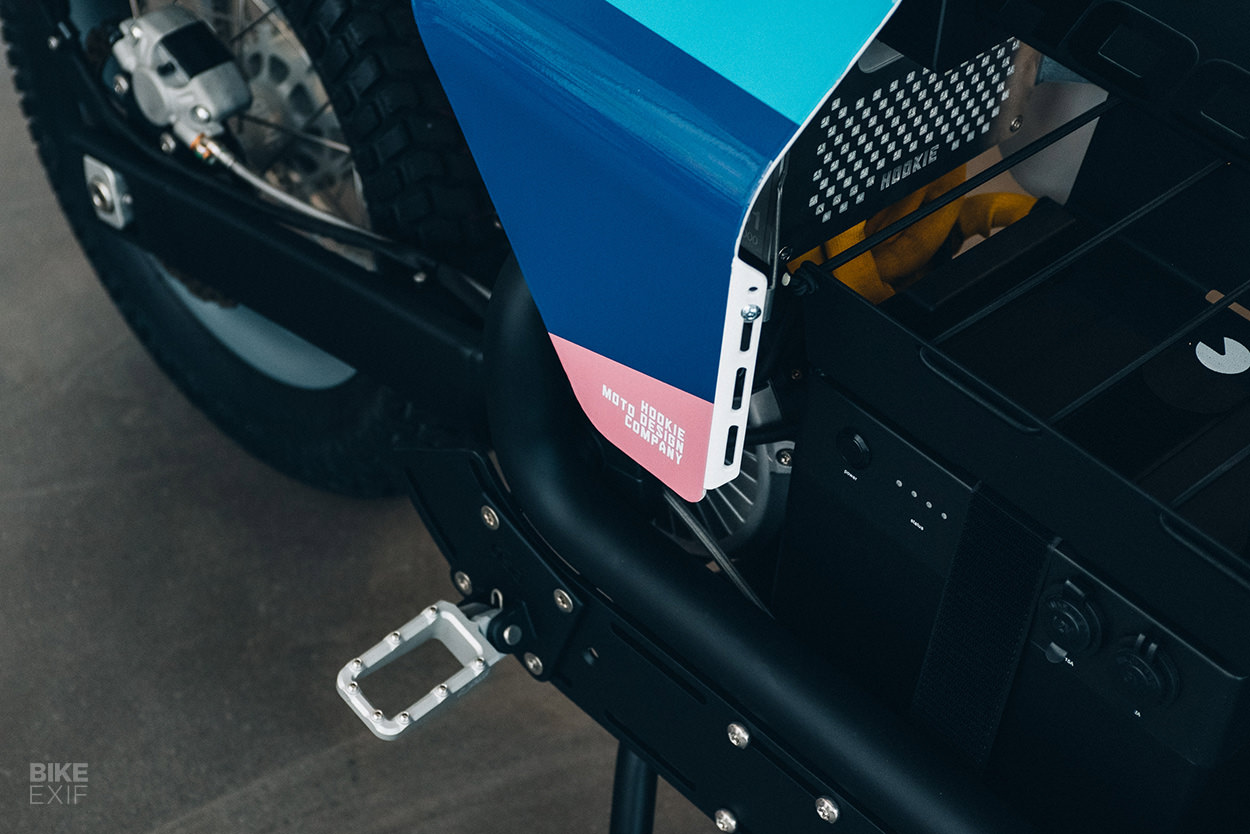 One of the Ösa’s body panels is powder coated white, and wrapped in color block vinyls. The other one was painted by Nico, and reads “whenever things get complicated, ride and play hookie.”

Both bikes are sporting a set of all-terrain Bridgestone REC tires, measuring 14×5.4”. It’s a tight fit, but Nico assures us there’s no rubbing… and it means the crew can take their Ösas anywhere, which is exactly what they’ve been doing. 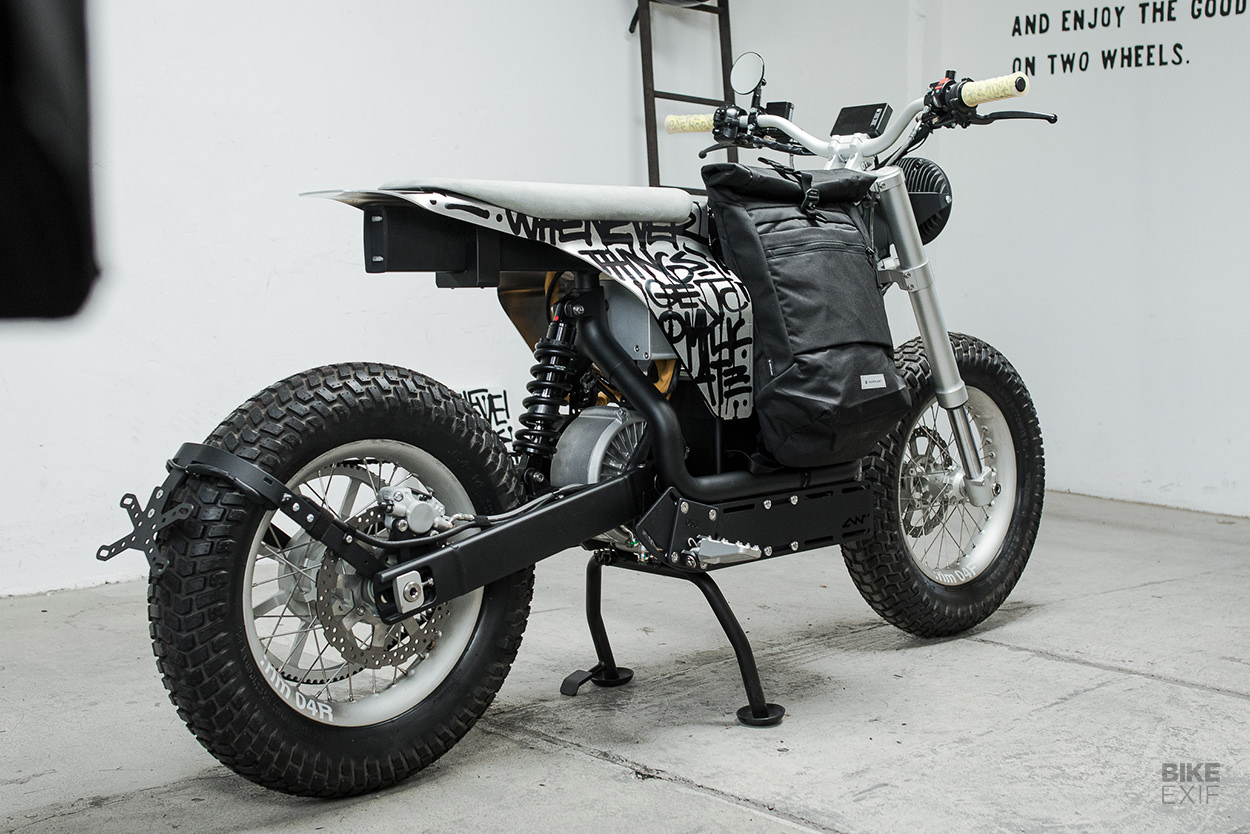 Hookie will be building a limited number of these to order, and, since there’s no cutting or welding involved, offering a kit too. They’ve christened their Ösa design ANT, after the strength of nature’s hardest working insect. “And ants are team players,” says Nico, “just like us!” 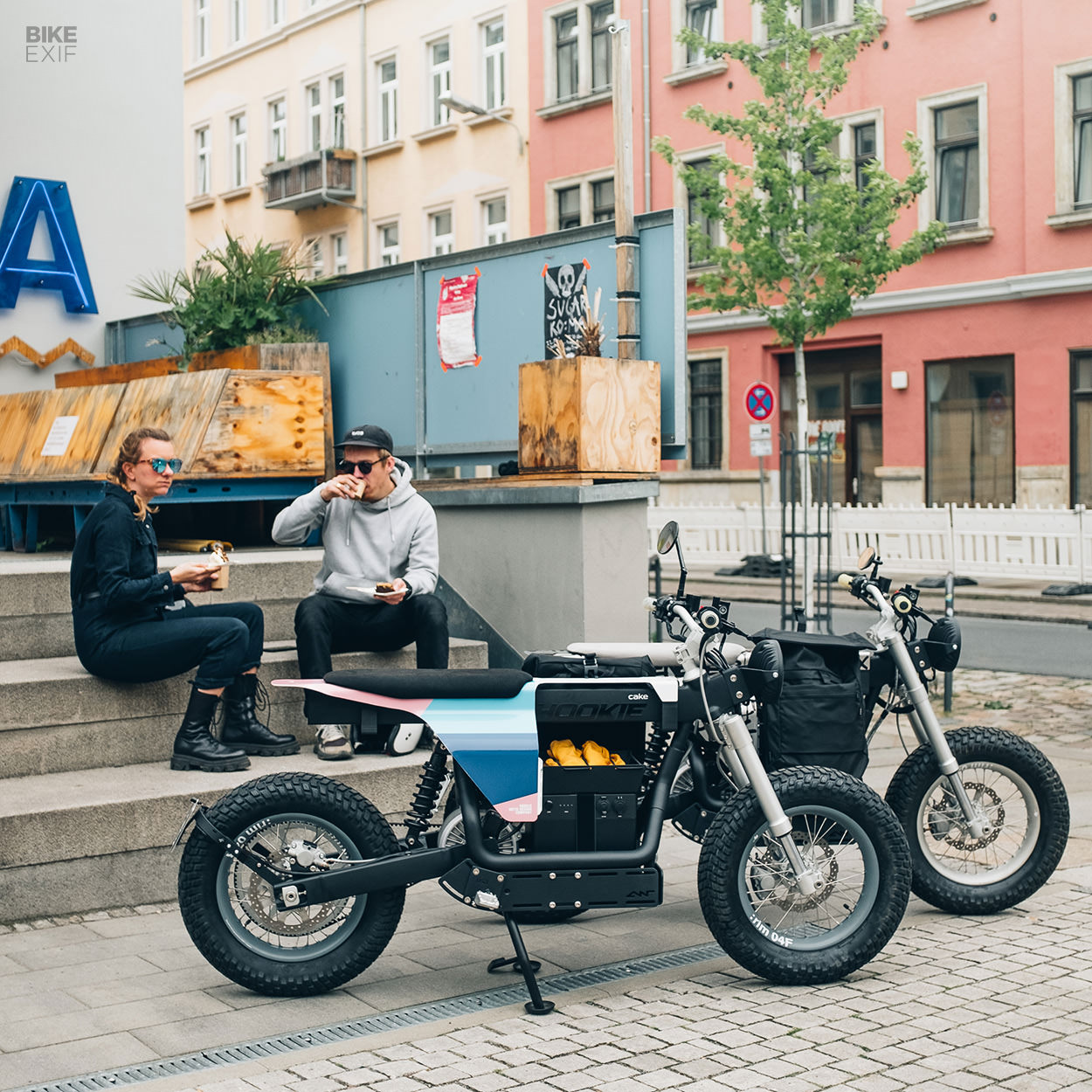