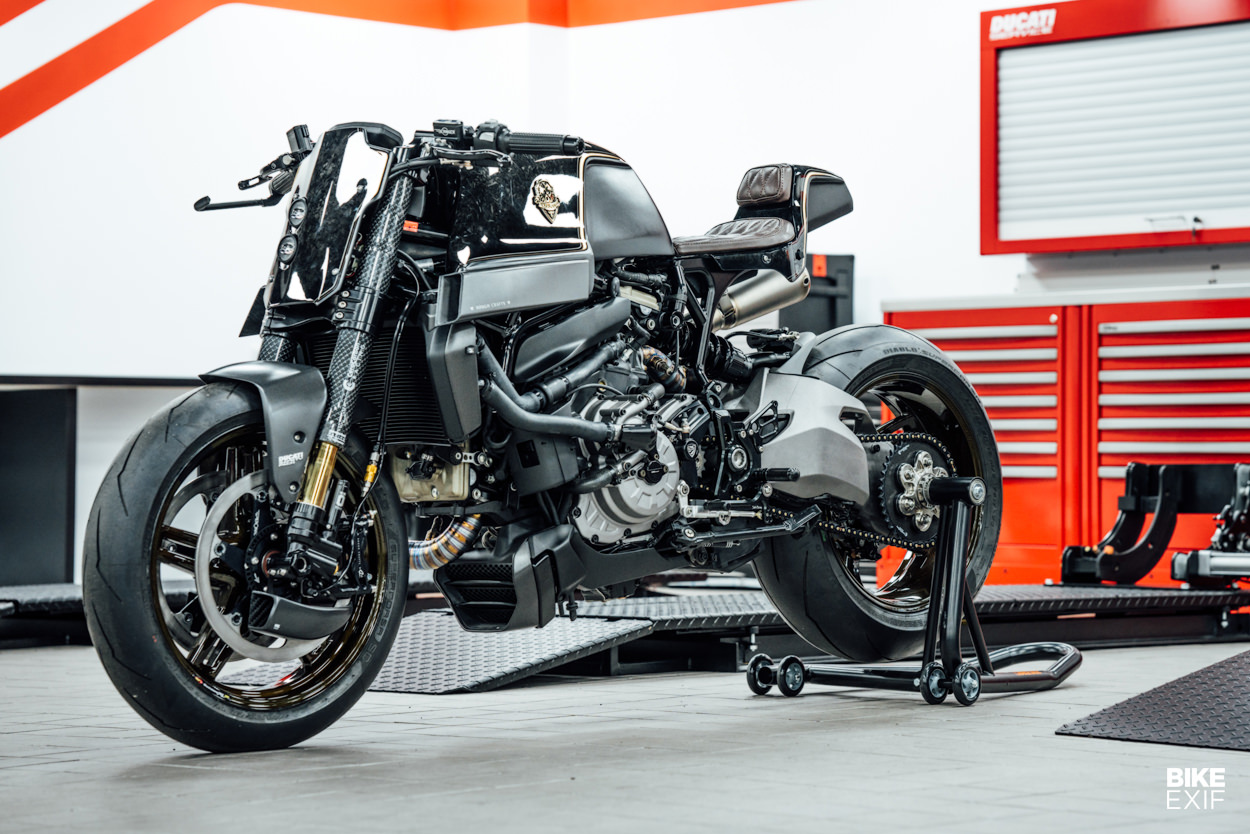 Word of mouth is a powerful thing. You might not trust what you read on social media or see on TV, but you probably do trust the judgment of your friends. And that’s how this Ducati came to be.

If you’re a regular reader, you’ll remember Wes’ report yesterday on the new Harley Fat Boy from Rough Crafts. The client who commissioned that Harley told his mate about Rough Crafts, and within a day, Winston Yeh had another entry on the job sheet. 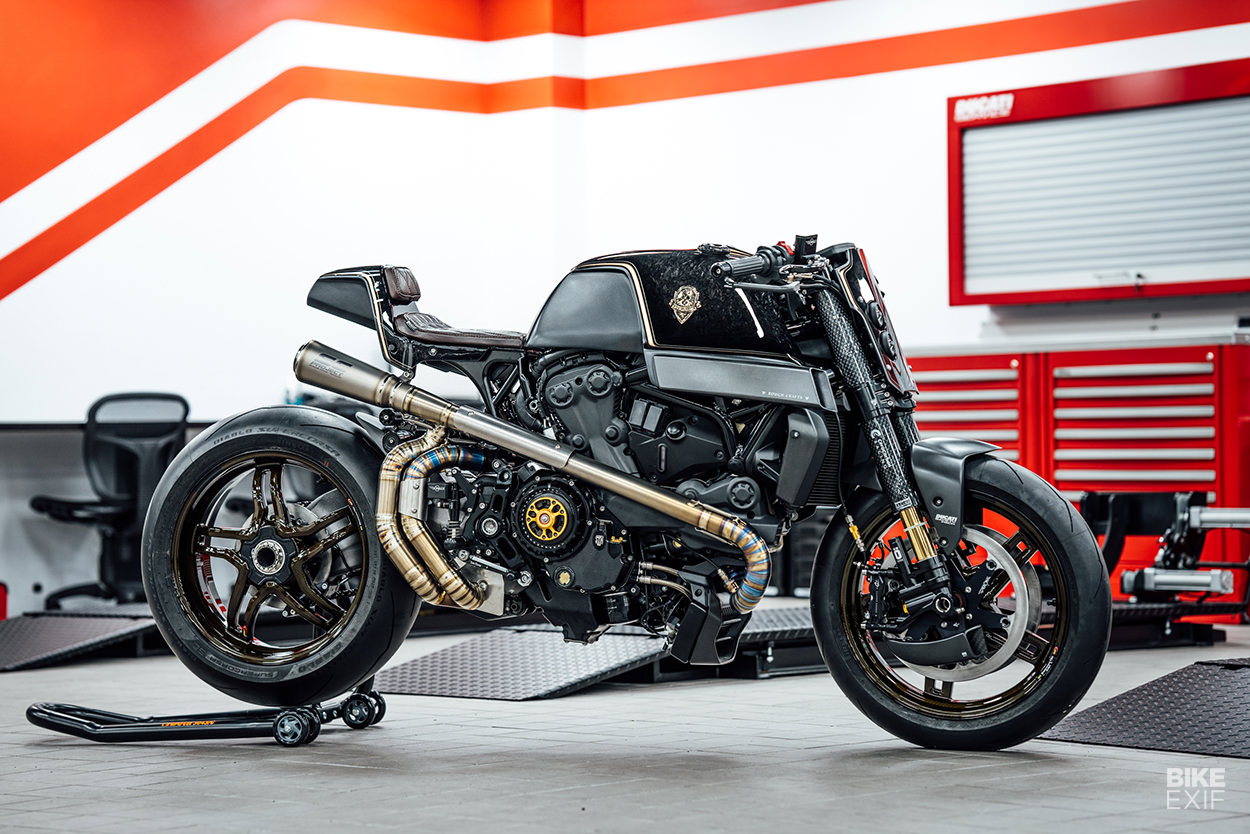 This particular client is not a fan of Milwaukee machinery though, so Winston turned his eye to Borgo Panigale. “I’ve always been a big fan of the Ducati Monster,” he tells us. “Especially when they came out with the 1200/821 platform. The minimal, dual-section tubular frame makes it very easy to modify.”

“Even though there’s the more powerful Streetfighter V4 in the Ducati line up, the simplicity of the L-twin engine still provides a much better platform for any custom build,” he adds. 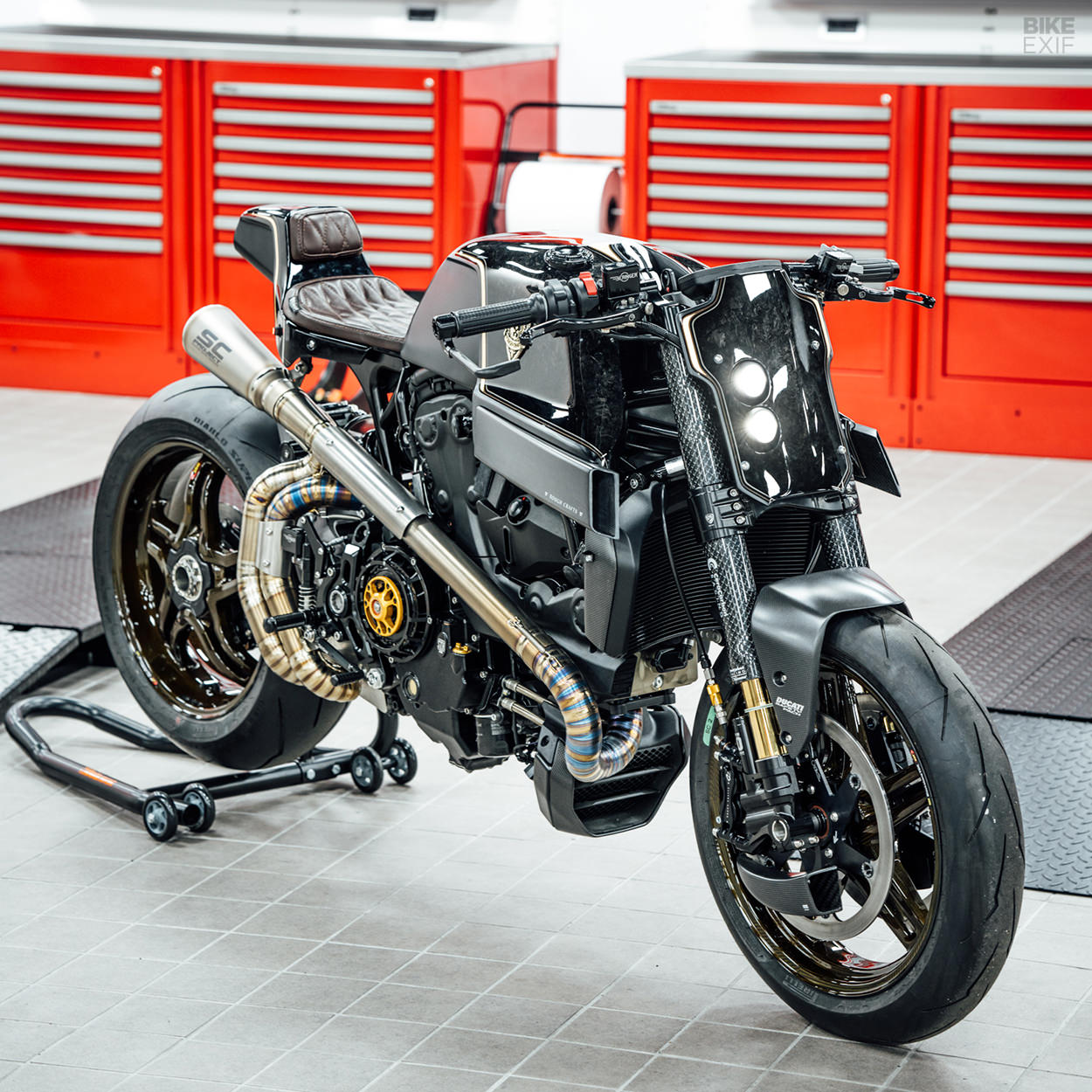 The client wanted a build that was “high spec and performance driven,” and Winston managed to locate one of the last brand-new 2020 Monster 1200S models in Taiwan—the predecessor to the new Monster 937.

With 147 hp on tap, plus multiple acronyms in the electronics department, the Monster S already had the performance that Winston’s client desired. So the initial focus was on the aesthetics. 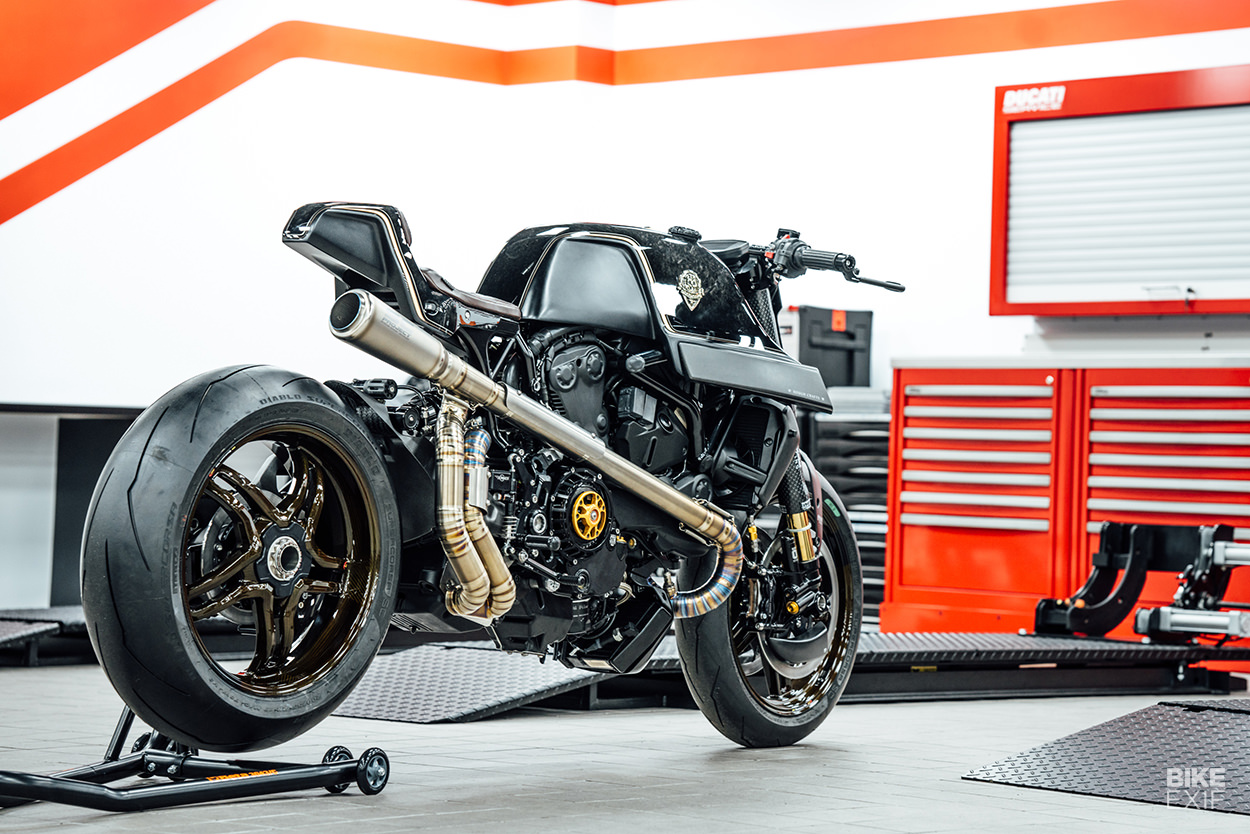 “The customer showed me some classic custom cafe racers, but he wanted something super-modern and racy,” Winston recalls. “Looking for inspiration, the Pikes Peak machines built by BottPower and Deus Ex Machina caught my eyes: huge air ducts, naked, and all business. Brutal machines.”

To give the classic cafe silhouette a modern twist, Winston played with the front and rear proportions, adding a CNC’d billet rear subframe and seat pads from local specialist Chirui Leather Custom. 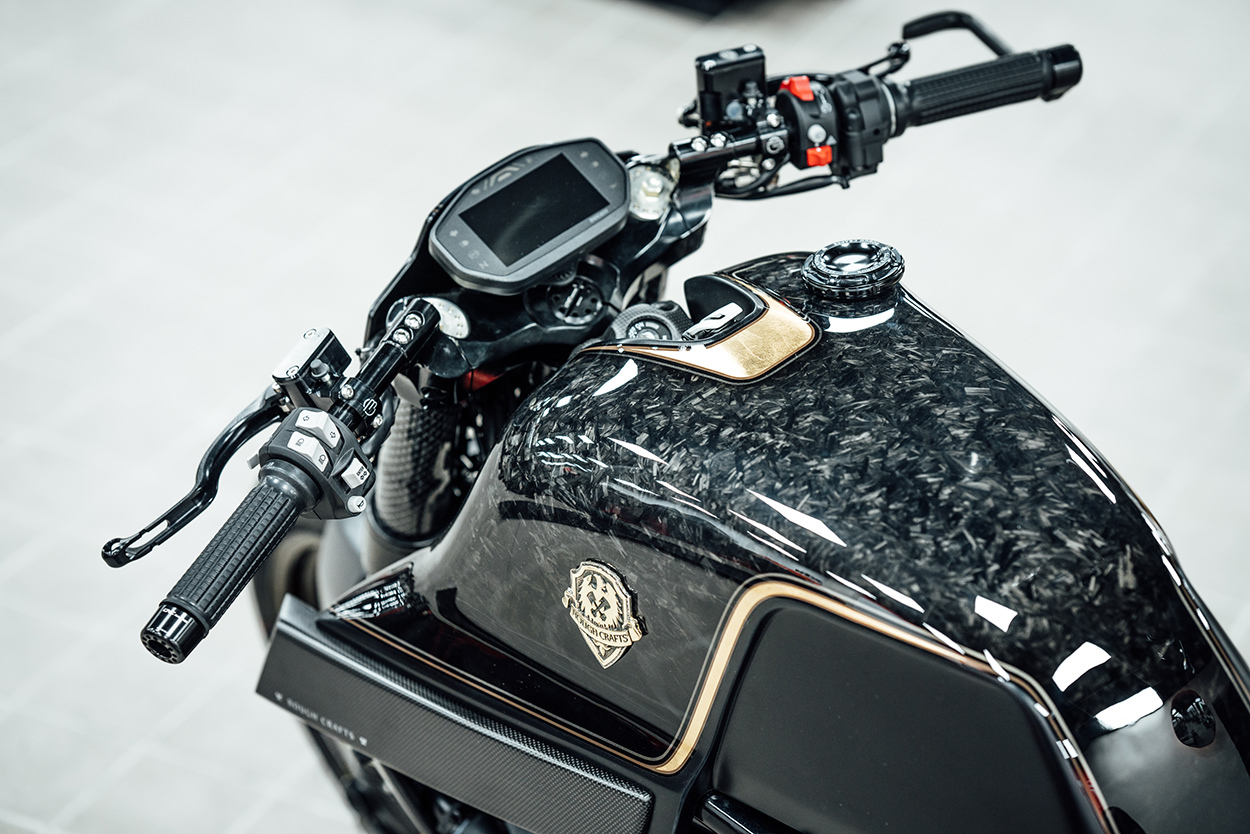 There’s also a completely new and rather angular tank, with knee inserts and badging by 2 Abnormal Sides, plus big air ducts to help cool the notoriously hot Ducati rear cylinder.

With a flat-track inspired ‘number plate’ fairing at the front and a compact tail section, the Monster now has an extremely racy vibe. But the riding position has been tweaked to make it a little more user-friendly. “I designed a top tree with the clip-on bars integrated and raised up,” says Winston. “So it’s not too tough if the owner wants to ride it daily to the local café.” 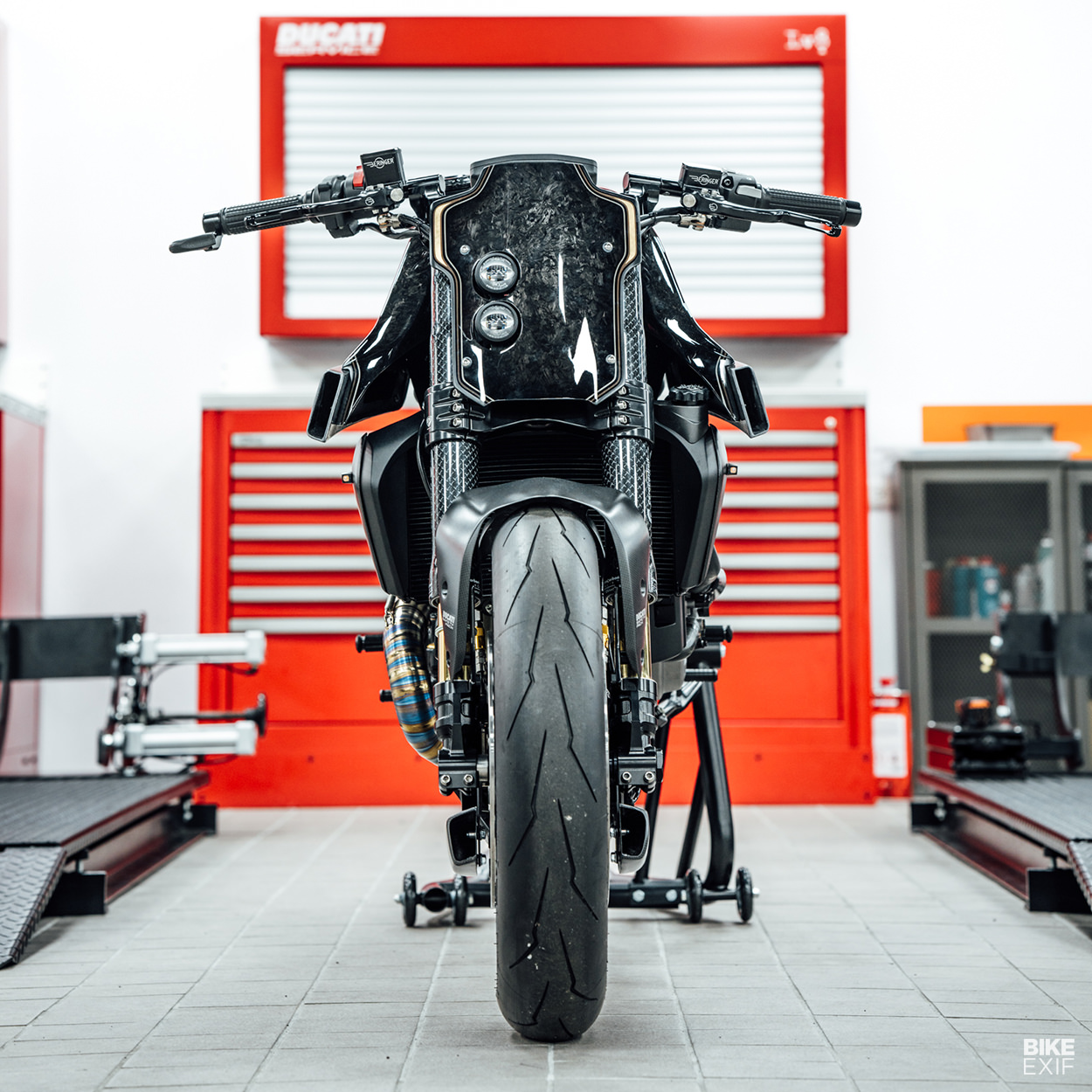 Winston has also fitted Motogadget grips and relocated the instrument to the top of the tree, behind the new Koso headlight. and everything fits together as neatly as a factory design. 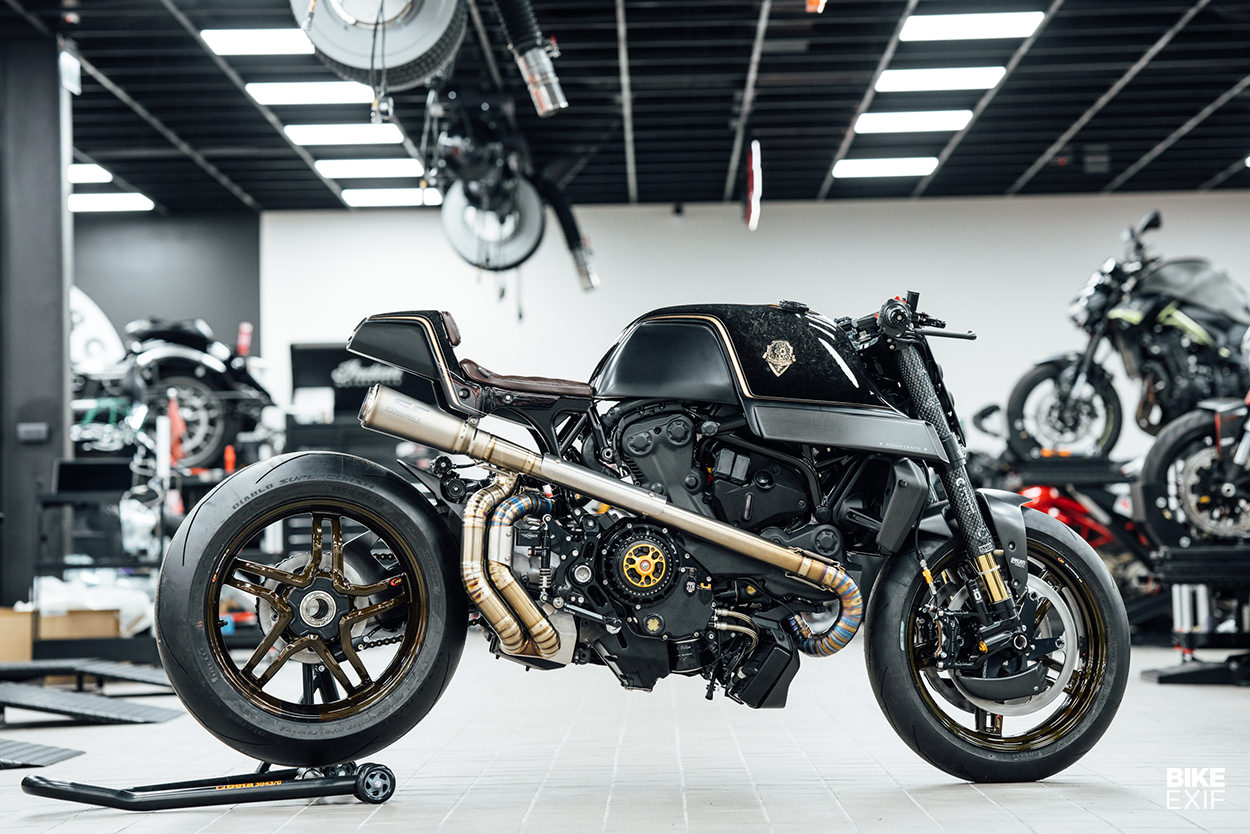 “The high rise tail pipe might look scary, but it’s tucked in close to the engine,” says Winston. “Initially I wanted something that looks super clean and sharp, but the rear pipe would be very short if it went directly from the rear cylinder to the tail.”

Ducati’s own Hypermotard 950 inspires the design. “At the bottom is a D-shaped link pipe,” Winston reveals. “It makes the stock electric box look like an exhaust cat box.” It’s a neat if unconventional solution, with slinky new foot controls from Sato Racing bracketed by the headers. 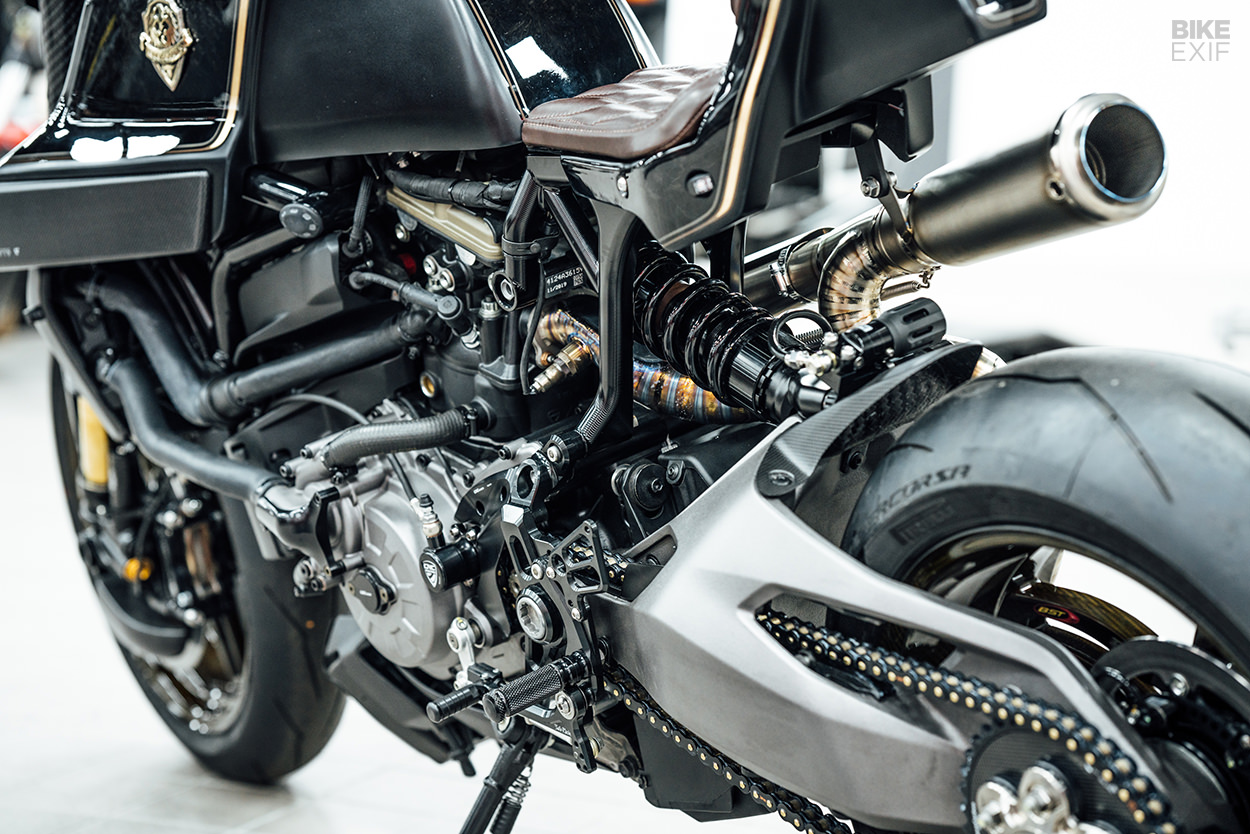 Power hits the back wheel via an STM dry slipper clutch, an RK Takasago RXW chain, a titanium sprocket flange from CNC Racing and a carbon fiber sprocket from CeraCarbon Racing.

The stock suspension on the Monster S is pretty high-end, but Winston has taken it to the next level. The forks are race-spec Öhlins FGR300, blacked out with CeraCarbon Racing outer tubes, and hooked up with the help of a CNC Racing bottom tree. 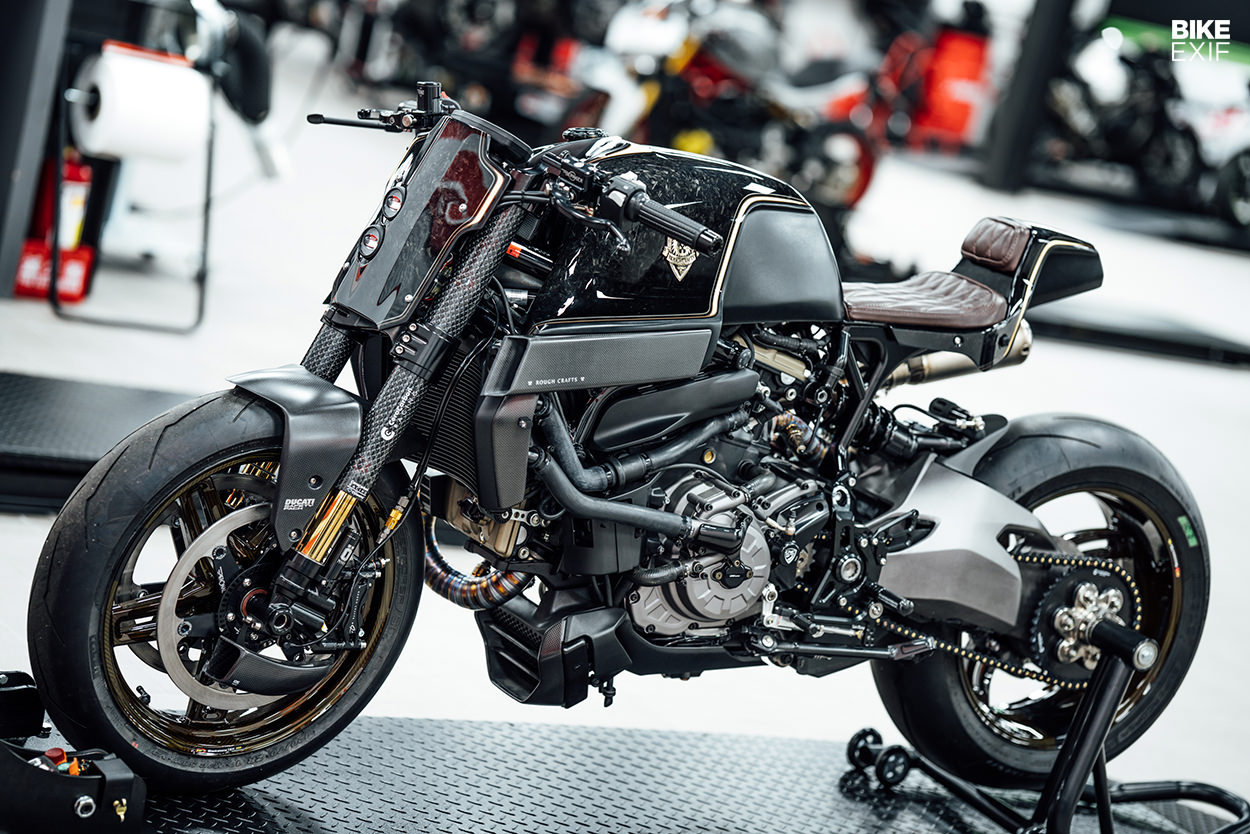 The brakes are Beringer all round, with four pistons at the front and two at the back, plumbed in with Accossato quick-disconnect hoses. The shock is the stock Öhlins, but blacked out and upgraded with a hydraulic preload adjuster from Andreani. All this goodness rolls on ultra light 17-inch BST Blackstone TEK wheels, shod with Pirelli Diablo Supercorsa SP V3 slicks.

As befits a performance-focused build, Winston and his assembly partner CH Moto have finished off the Monster with a multitude of small carbon and titanium parts, mostly to increase protection and lower weight. That includes carbon for parts like the radiator trim and rear fender, plus titanium wheel nuts and GP-style brake ducting. 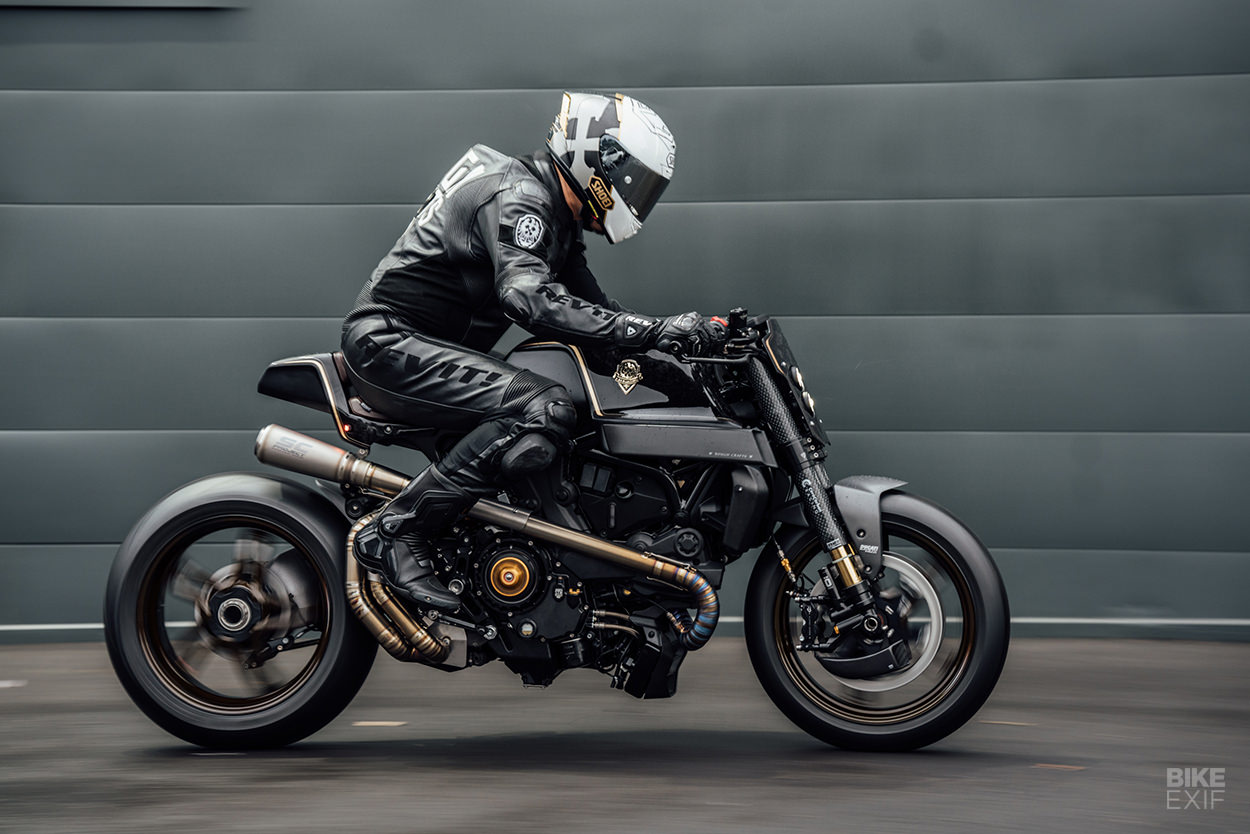 The final finish was applied by Line&Circle Custom Paint and, of course, it’s stark monochrome—with a medley of different shades and levels of glossiness.

It couldn’t be anything other than a Rough Crafts bike, but it’s also one of the fastest A-to-B weapons to ever leave the Taipei studio. The overall effect is slightly HR Giger, but in a good way—this is mechanical Brutalism at its finest. 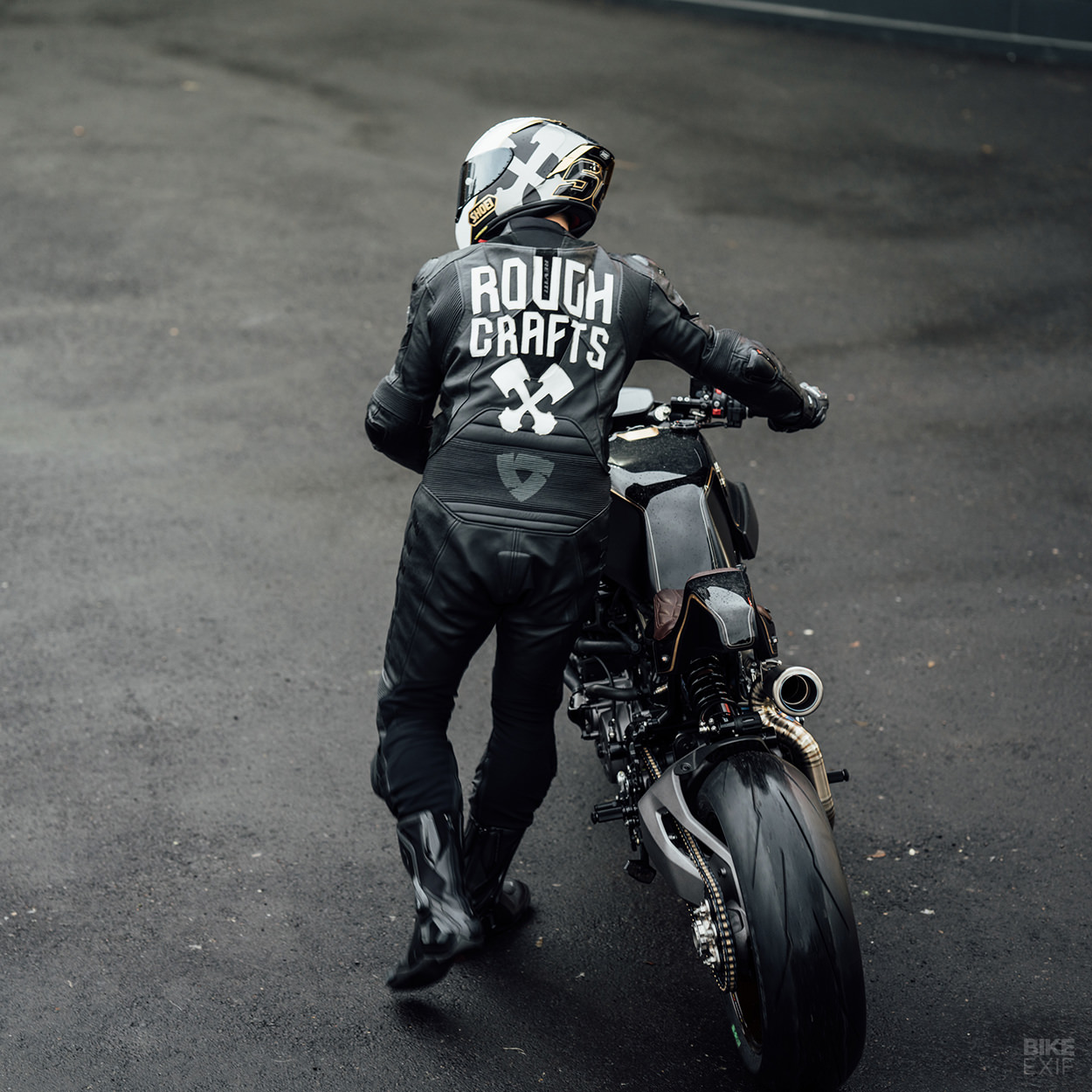