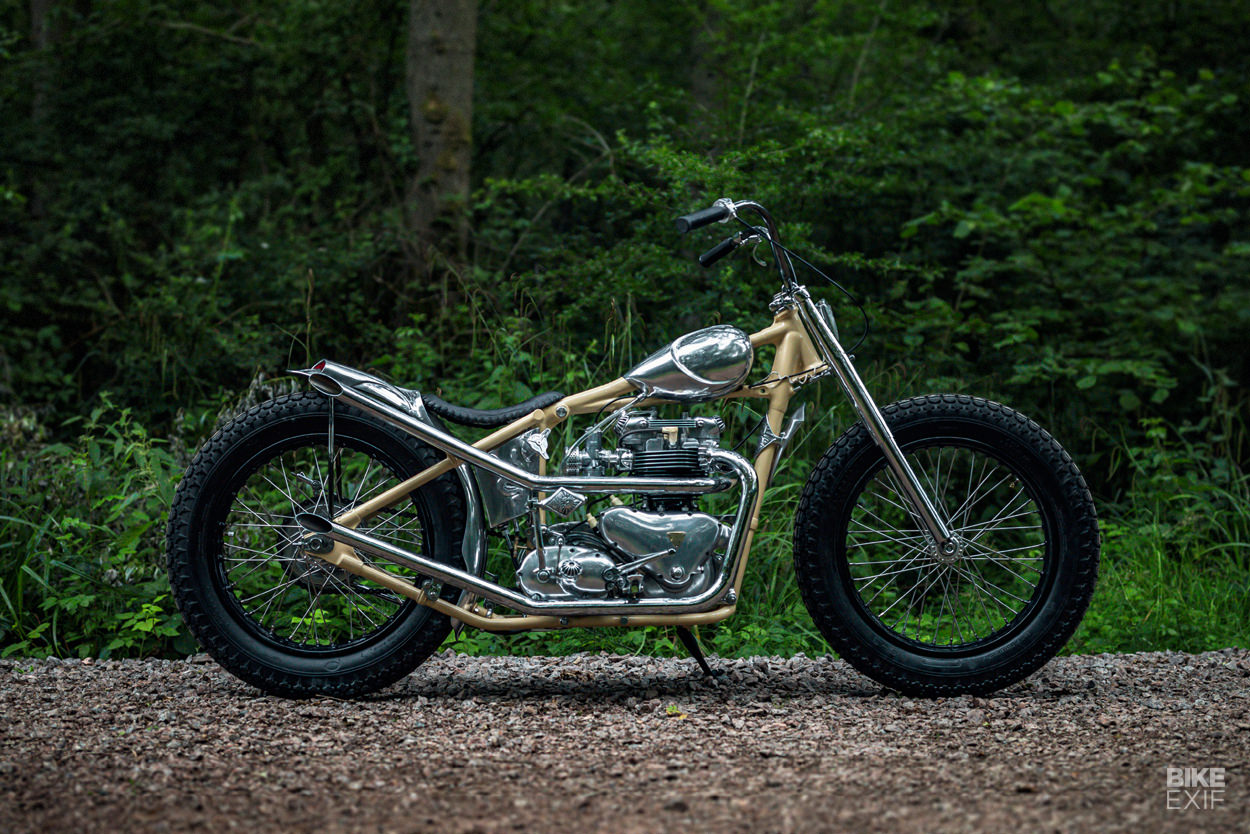 When we hear the term ‘sand cast,’ we think of very early Honda CB750s and their famous sandpaper-rough engine cases. But it’s not a technique restricted to big factories or large-scale production.

This elegant, stripped down Triumph 6T Thunderbird is a showcase for small-scale casting, and earned its builder an invitation to the Biltwell People’s Champ competition—which is part of the Born Free show in the USA. 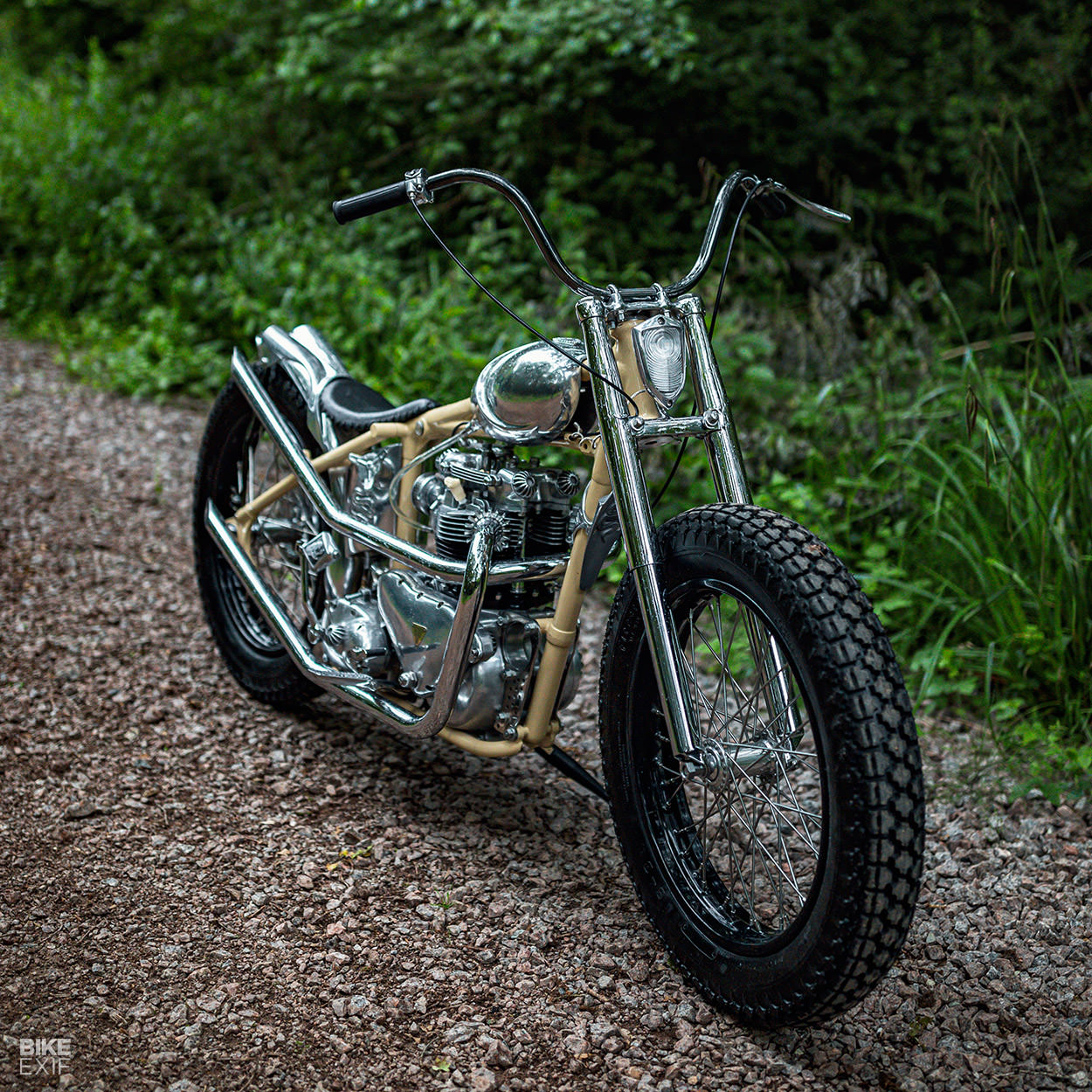 But this Thunderbird chopper wasn’t built in a foundry in the Midwest: it was put together in the suburban back garden of a small terraced house in the middle of England. The builder is the remarkably talented Robbie Palmer, who created the lovely Triumph Daytona bobber we featured a couple of months ago.

He’s based in Northampton, a struggling former industrial town which is an unlikely location for a top-flight customizer. But despite the unpromising environs, Robbie has turned out a stellar build. Even more surprisingly, it’s only his second ‘full’ custom. 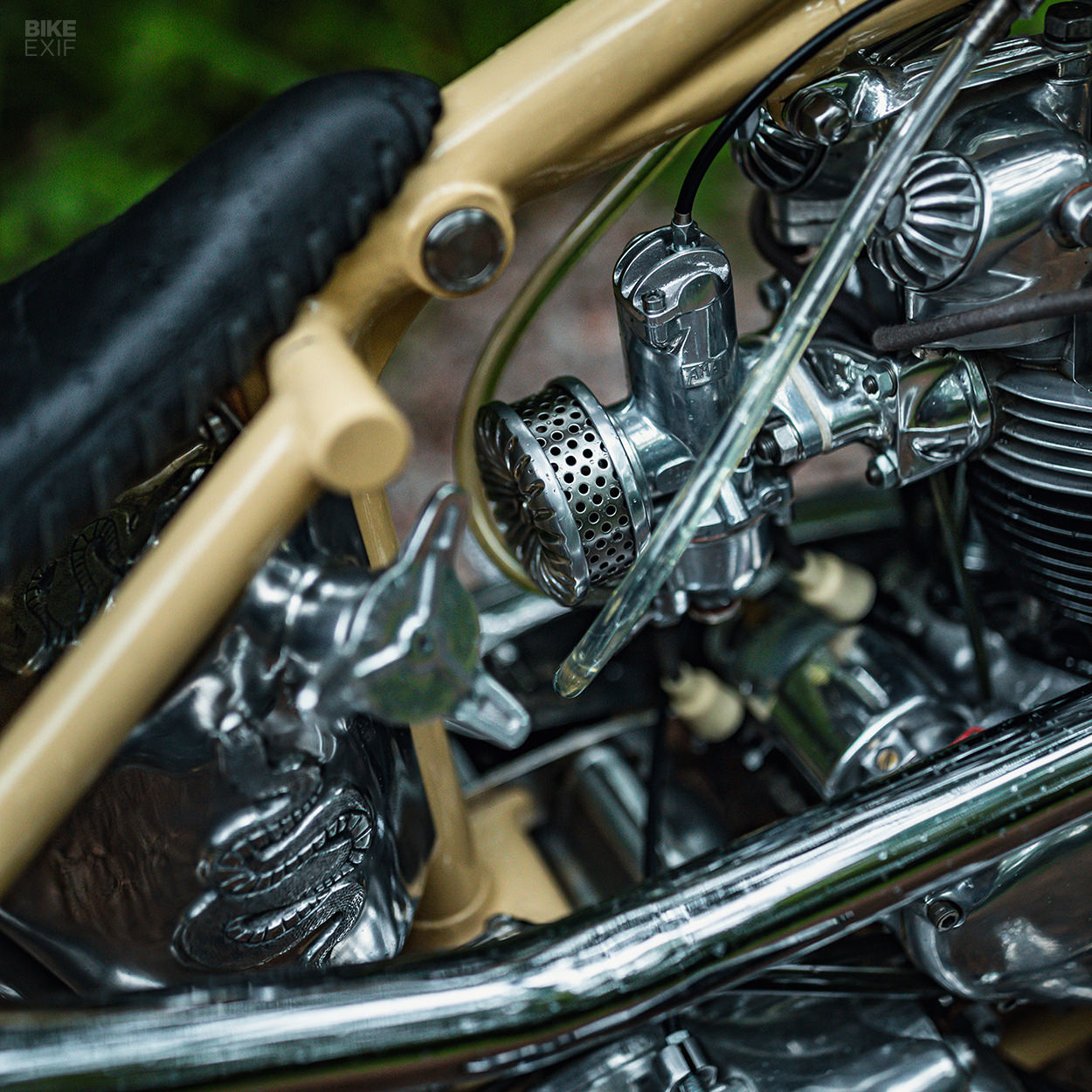 “I made a lot of sand cast parts, all sculpted from clay and cast in my back garden workshop,” he says. “That included the fuel tank, the primary cover, oil tank, fender and seat pan.” He also cast the headlight, throttle, air filter, kicker pedal and footpegs.

“My back garden shed is right in the centre of town. It’s overlooked by other houses and my neighbours were probably surprised to see sand casting happening in such a tiny space. The sound of the furnace firing up caused lots of curtain twitching, that’s for sure!” 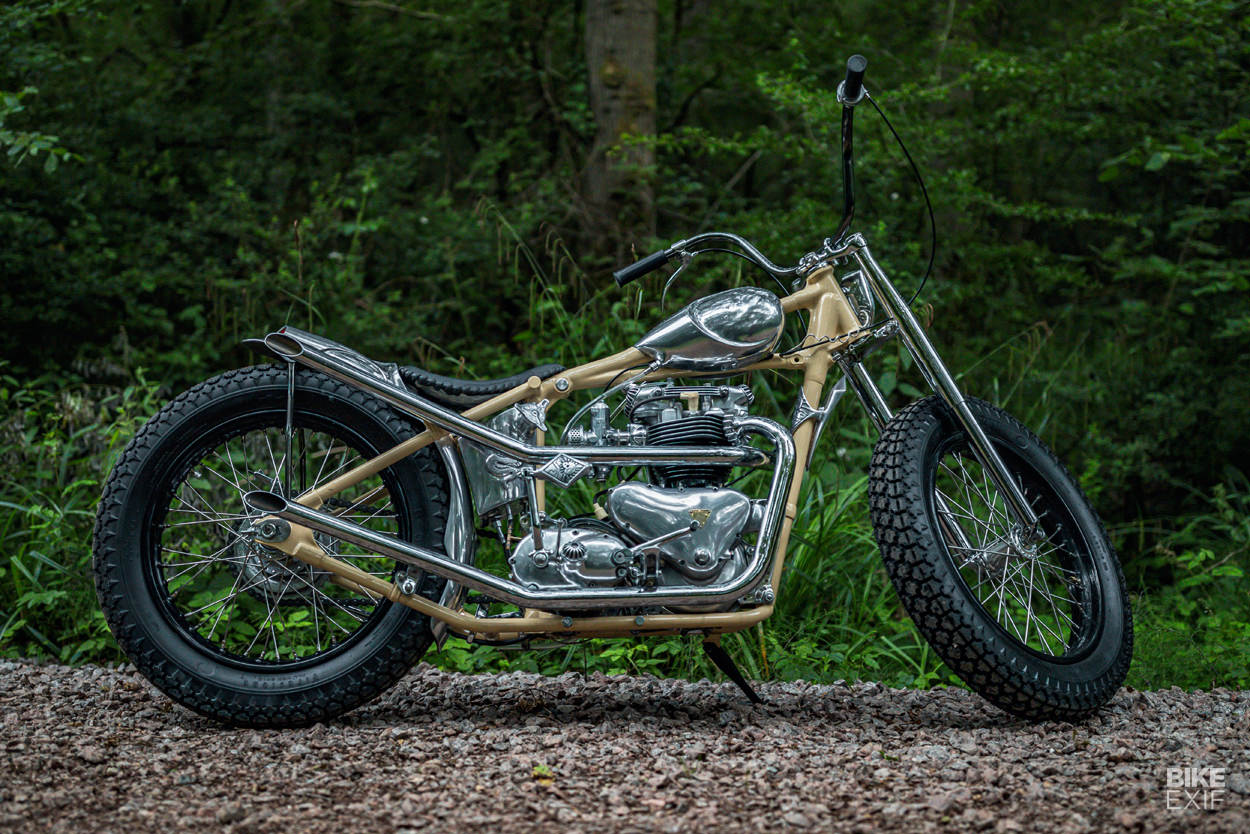 On this build Robbie also learnt how to TIG weld and braze steel. “It’s been a huge learning curve and I nearly quit a few times, but overall it’s been very rewarding. The clay and handmade sculpting process is interesting—it allows for so many options when creating parts. I feel there’s a lot more to learn with this process, and I’ve only just scratched the surface of what’s possible.”

Called ‘Dune,’ the Triumph is based on a desert theme—which makes sense given the sand involved in the process. “All of the smaller handmade parts have inspiration along those lines,” Robbie explains. “Whether it’s desert animal emblems, or curving, dune-like shapes.” 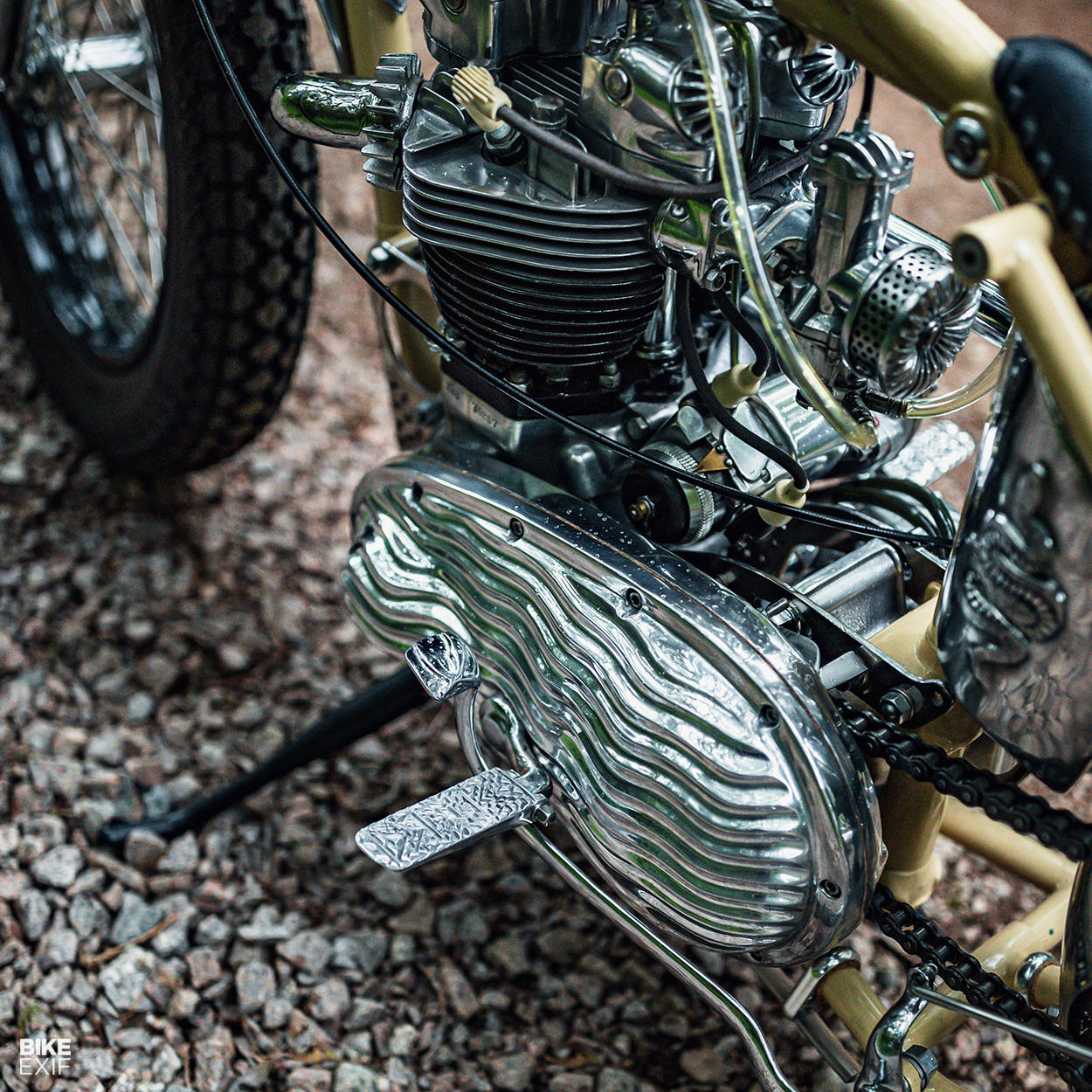 The donor bike was a mixed bag: a pre-unit Triumph that Robbie found on eBay. It ran well, but the frame and engine weren’t matching—and other parts were from all over the place too.

Robbie sold off the Triumph tins and fender to pay for the casting furnace, and then used that to make the new tank and fenders. “So that worked out pretty sweet.” 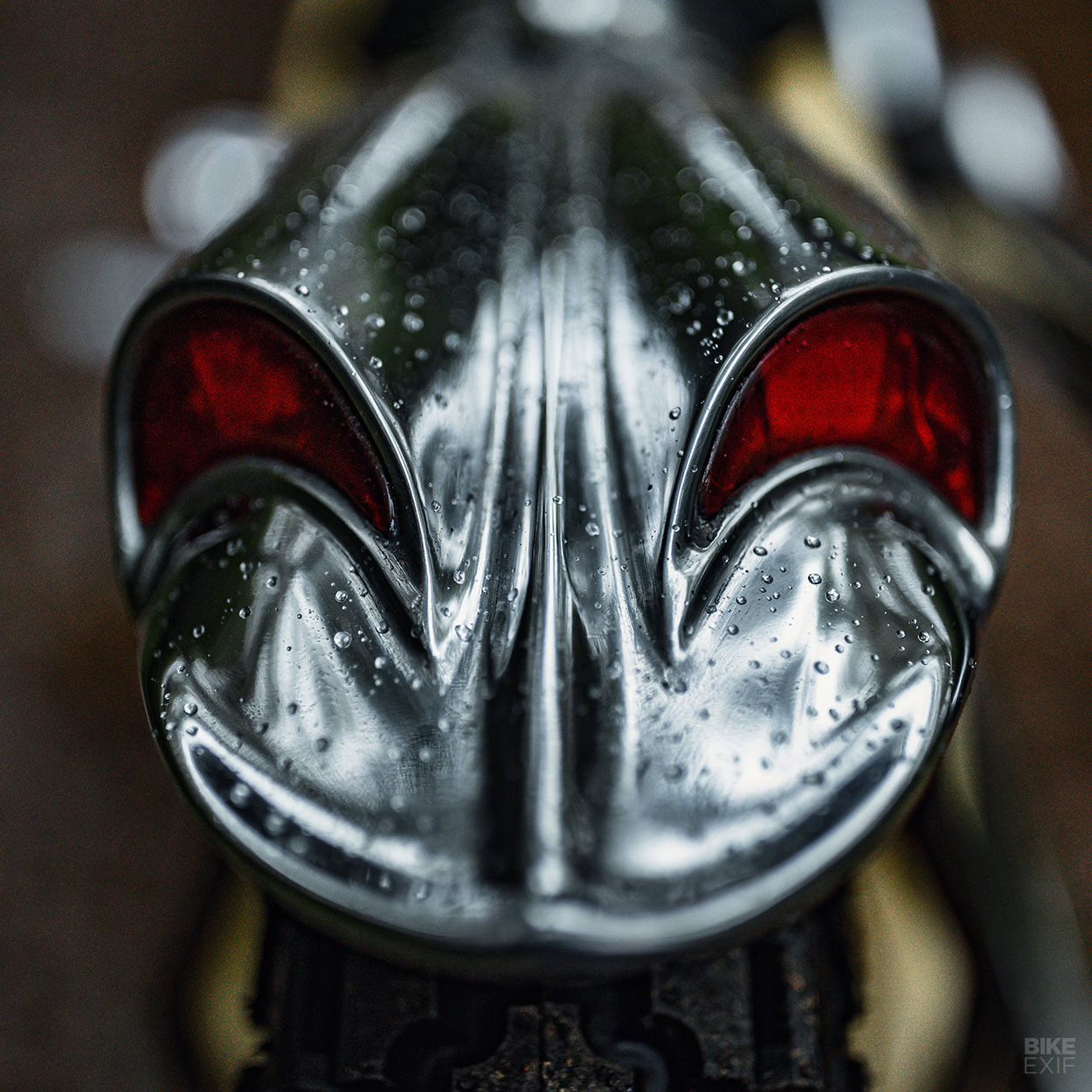 For the tank, Robbie hand shaped sections out of clay and then cast them in two pieces. The tunnel was fabricated from thick sheet aluminium, and then all three sections were welded together—along with three threaded bungs for the petcocks and gas cap.

“The tank and fender are very much inspired by 60s show bikes and [Born Free builder] Mark Drews,” says Robbie. “I loved the idea of a 60s-style chopper, but didn’t want to fabricate the scoops and shapes from sheet steel—I felt I’d seen it before.”

So Robbie took an off-the-shelf Lowbrow Customs fender and used sheet steel to make a pattern. Then he cut it into three pieces, and cast them before welding them back together. “It was very labour intensive, but I’ve not seen it before. So once I had the idea it needed to happen!”

The frame is the original Thunderbird front loop, with added cable guides and a kill switch inside the existing sidecar mounting point. Excess tabs were trimmed off and unwanted holes brazed up before it was coated by Paint By Matt. 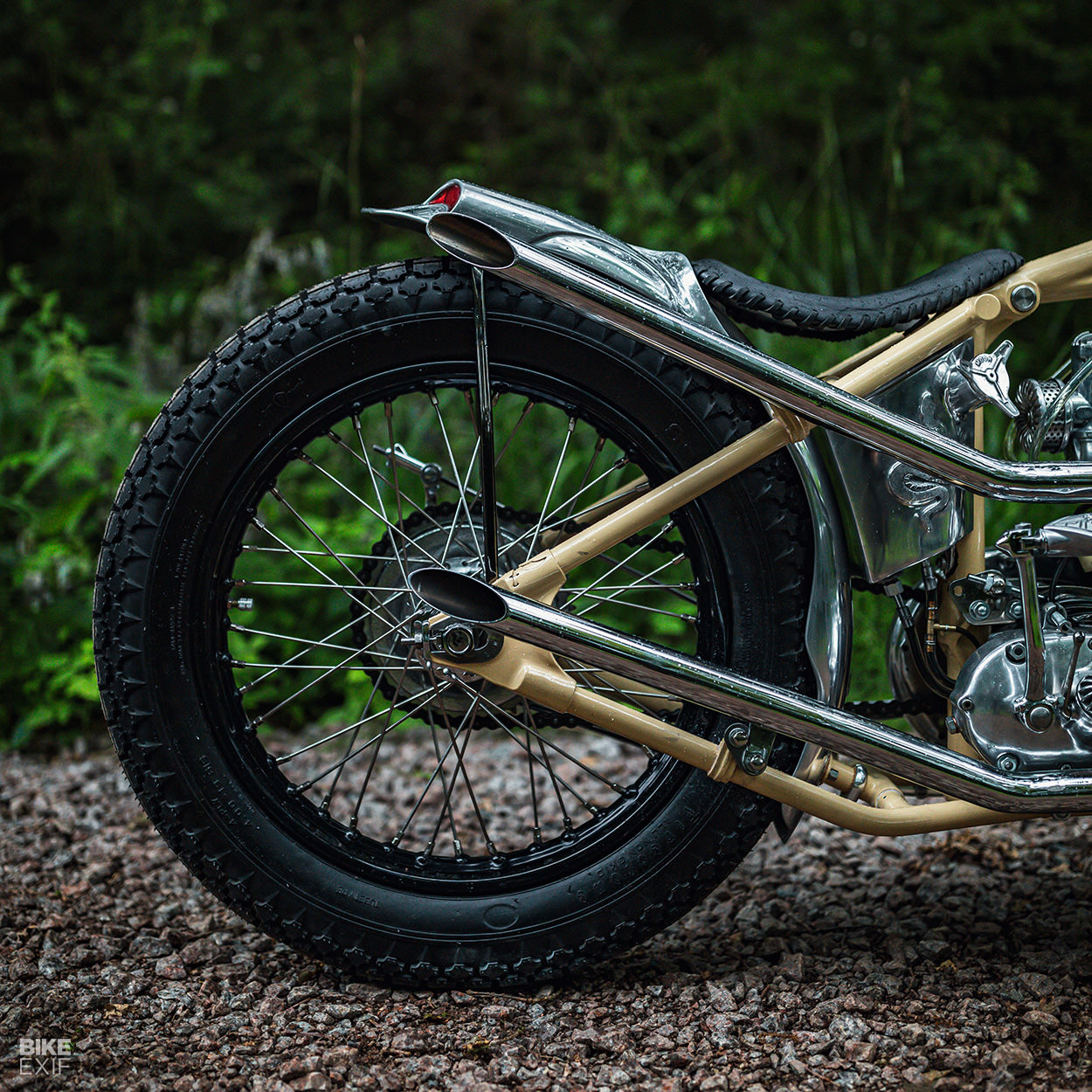 The rear section is an off-the-shelf hardtail that Robbie modified heavily. The seat-stay brace was replaced with a curved tube, and Robbie also trimmed the axle plates and added lugs—so that the rear end looks similar to the original front.

Other modifications included fabricating the pipes, lowering the forks two inches to match the lowered hardtail, and hand lacing the leather seat cover. Robbie also built up both wheels with 19” Dunlop rims. 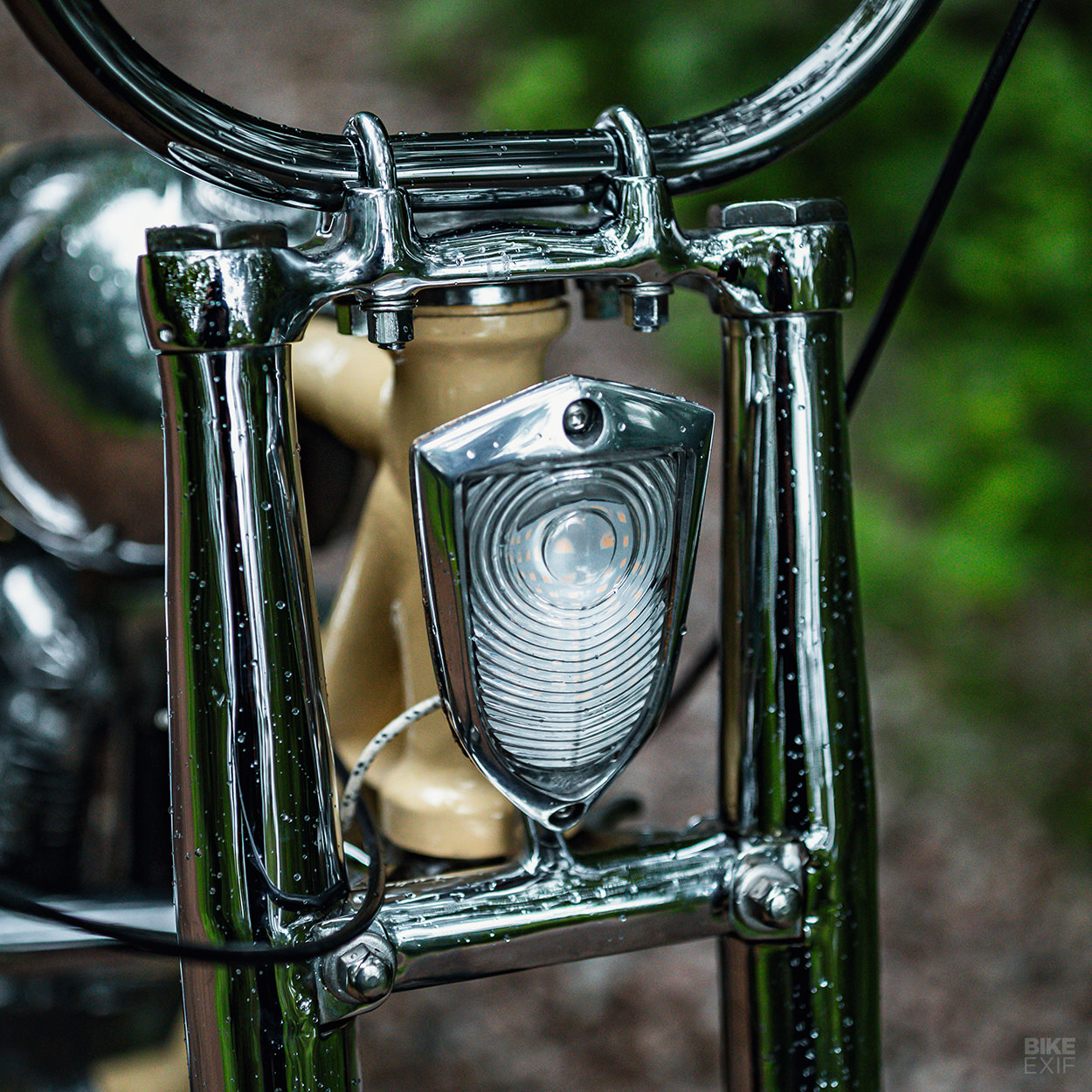 This is one of those machines that merits close inspection. The LED headlight, for example, is built around a 1950s Chevy lens. “I needed a body for it, so I sculpted one from clay to suit the delicate shape of the lens.” Robbie used a similar technique for the carb filter, which is actually modeled on a pair of plastic takeaway container lids.

“There’s hardly anything on this bike that was bought and fitted ‘as is’,” he says. “Aside from the Lowbrow grips, Firestone tires and Prism Supply petcocks.” 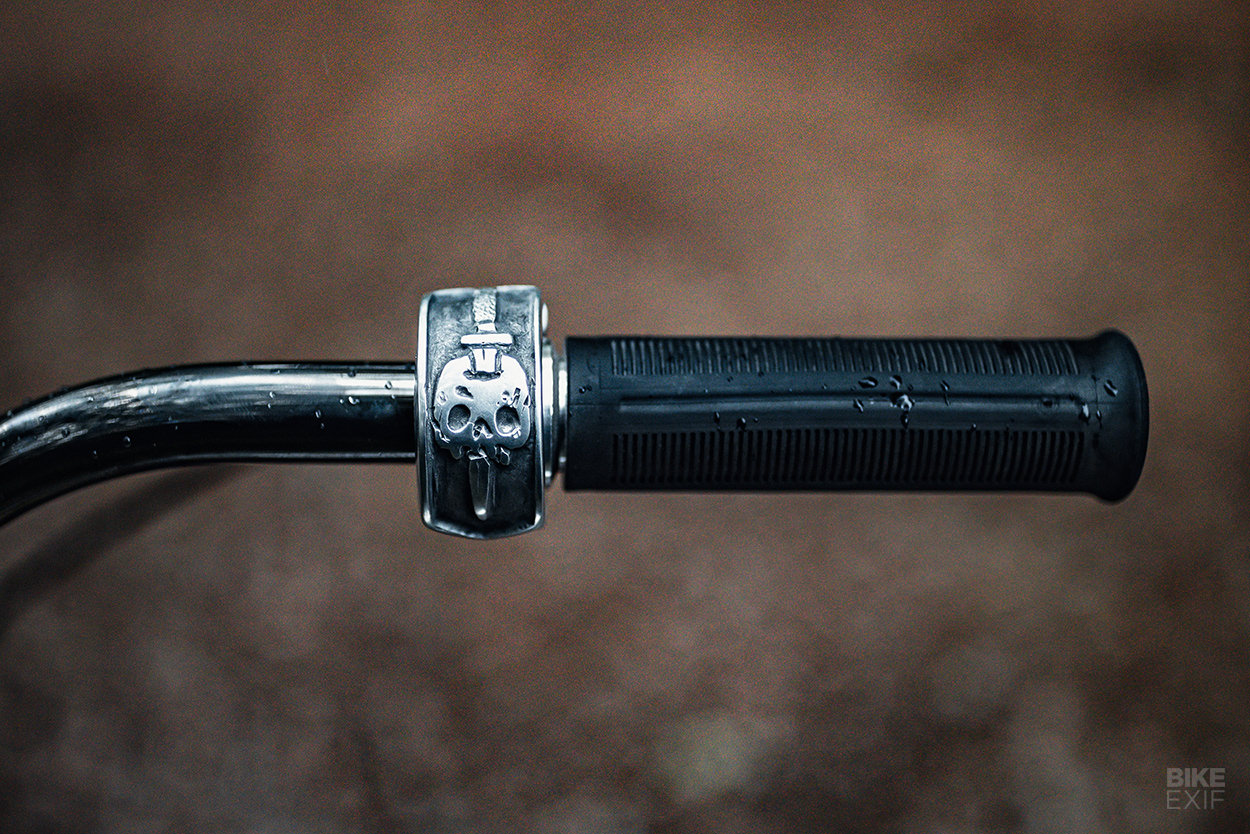 Unfortunately, Robbie never made it across the Atlantic to the Born Free show. “The UK was banned from entering the US due to the pandemic. I was really hoping things would open at the last minute, and had shipping companies lined up, ready to go—but it just never happened.”

“Then I got Corona the week before the show, and that was the final nail in the coffin. Although not my coffin, fortunately—it could have been worse!” 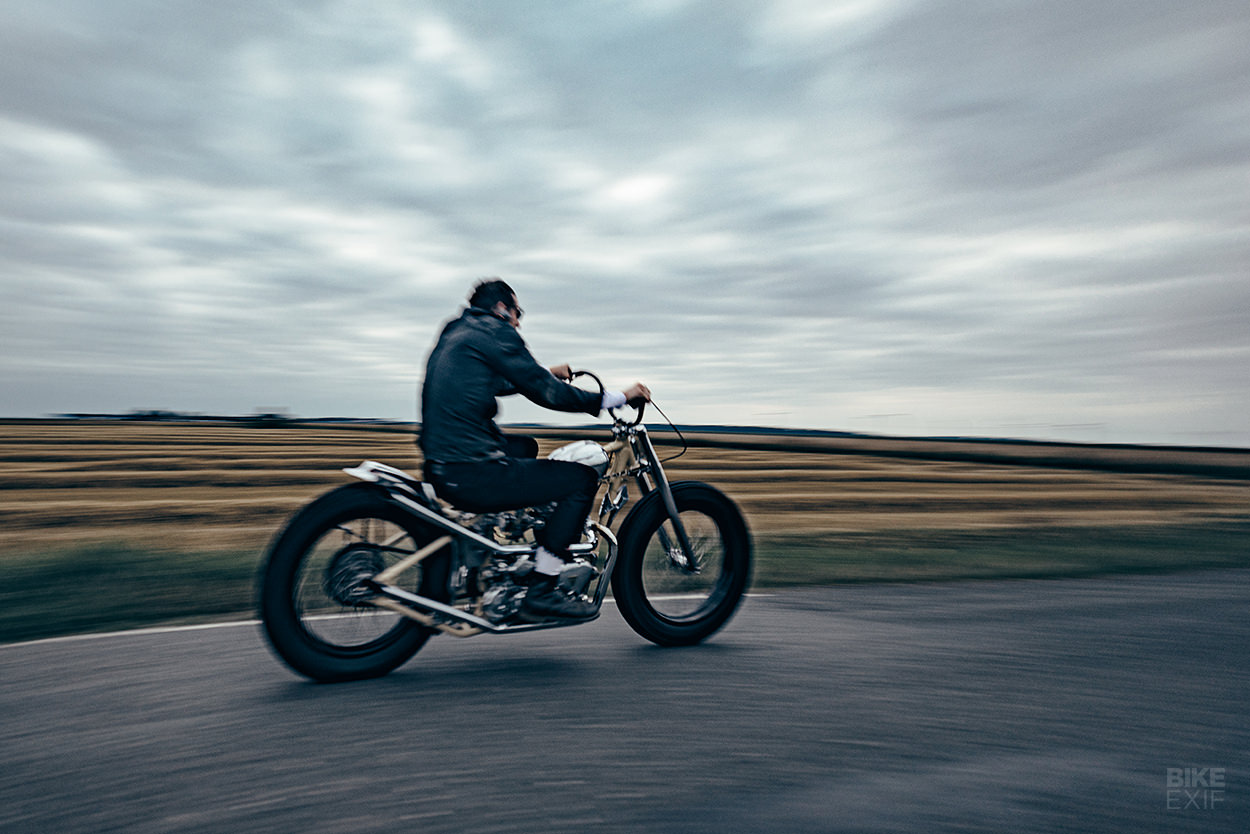 The Thunderbird ended up as one of the six People’s Champ finalists. Robbie still gets to ride the bike, and says that it feels very light on its feet. “The motor was rebuilt before I bought it, and I’ve not had to tinker with it too much. It runs and rides amazingly, and absolutely rips. Feels really balanced and similar to a BMX, which is where I feel most at home anyway.”

After struggling through a pandemic slowdown in his day job—a production company called Black Revolver Films—things are now looking up for Robbie as we approach 2022. 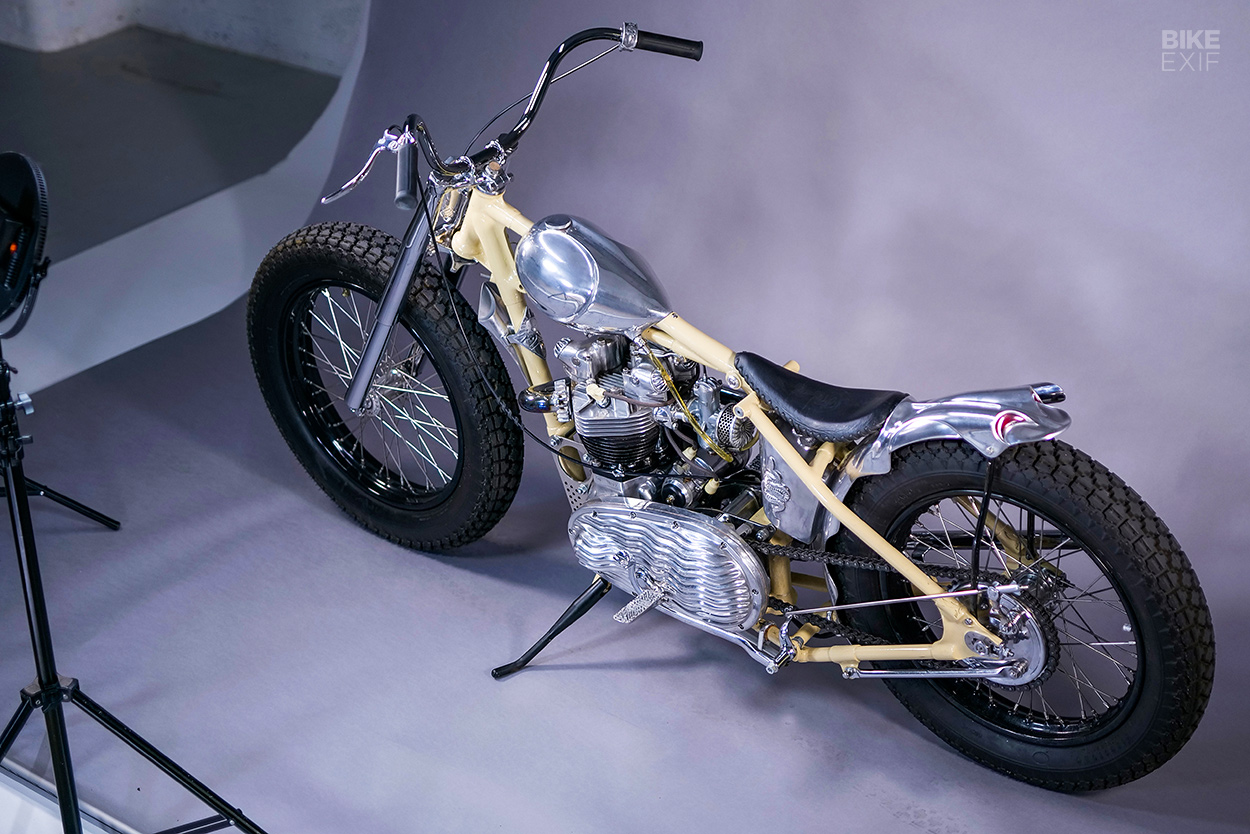 “We’ve just finished renovating an old factory, and turning it into our first photography studio, Black Revolver Studios. I’m also looking forward to my next build, where I can really start to push the sand casting technique—now that I’ve wrapped my head around it!”

What are the odds that Robbie will soon be on the official invite list for a future Born Free show? We wouldn’t bet against it.