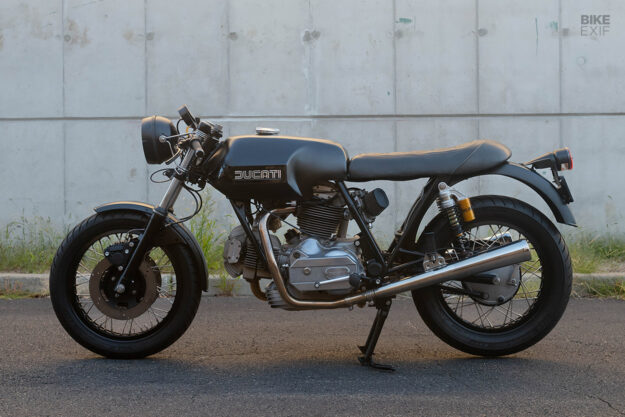 Few shops know Italian classics quite as well as Brooklyn’s Moto Borgotaro. Owner Peter Boggia has been wrenching on Italian machinery for over two decades, having cut his teeth at the Moto Guzzi Chuck House in New Orleans, Louisiana.

Peter’s custom Guzzis have graced our pages before, but Moto Borgotaro builds much more than just traverse-twin beauties. The 1979 Ducati 900 GTS café racer you see here is a prime example. It perfectly showcases Peter’s love for all things design—and his exceptionally good taste. 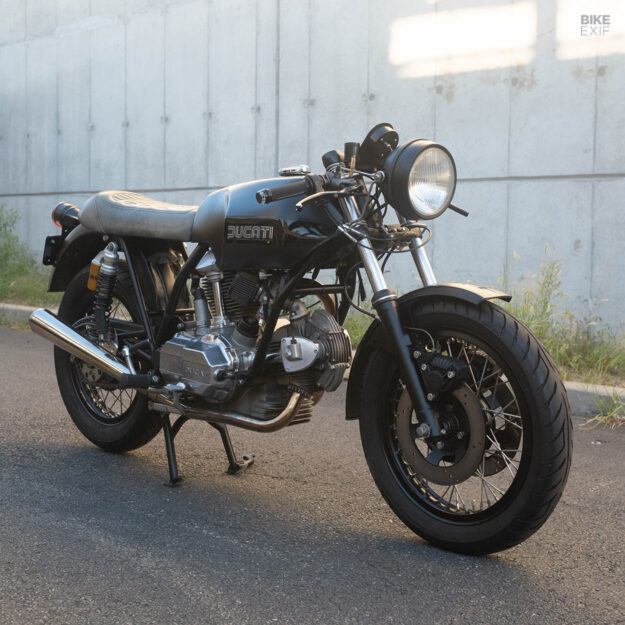 Two iconic designers in particular inspired Peter’s approach to this build. The first was industrial designer Dieter Rams, the godfather of the ‘good design’ principles that went on to inspire everything from the iPod to Ikea furniture. The second was American artist Donald Judd, one of the most influential minimalists to ever live.

“I decided to go with a minimalist approach,” he explains. “Thinking less about motorcycles, and more about the design language of industrial designers and fine artists. I also wanted a classic low silhouette that was purpose-built, with a nod to both the new and old school Ducati designers and engineers.” 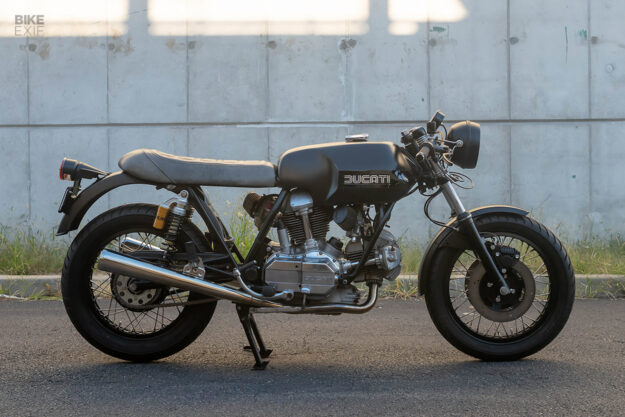 In keeping with this inspiration, Peter knew he wanted a well-designed but economical chassis, with a worry-free motor to match. He decided a bevel-driven Ducati would be the ideal platform for his vision, and hunted down a 1979-model Ducati 900 GTS in the classifieds.

Once Peter got the bike into his shop, he set about stripping everything down and shaving off unnecessary bits where he could. Frame tabs were removed, the Marzzochi triple clamp was ground down and re-welded, and a new mount was welded up to stash the battery box under the gas tank. 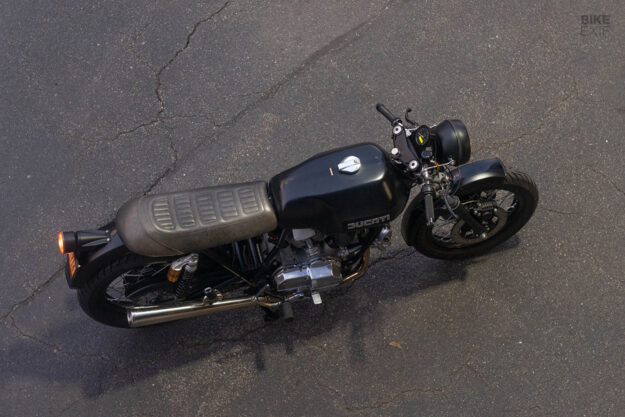 The frame was powder coated in a special matte black finish, as a homage to the original enamel-black frames of the period. The tank and fenders were repainted to match, with a subtle play on the Ducati’s original livery. Instead of the traditional blue and silver front-to-back stripe motif, Peter opted for an understated gloss black effect.

The forks, triples, and headlight were all redone in black, as were the wheels, after receiving a fresh rebuild from Woody’s Wheel Works in Denver, Colorado. Finally, Peter handed the factory seat off to his friend Corinna Mantlo at Via Meccanica upholstery, who recreated a minimalist take on the style and shape found on Ducatis of the era. 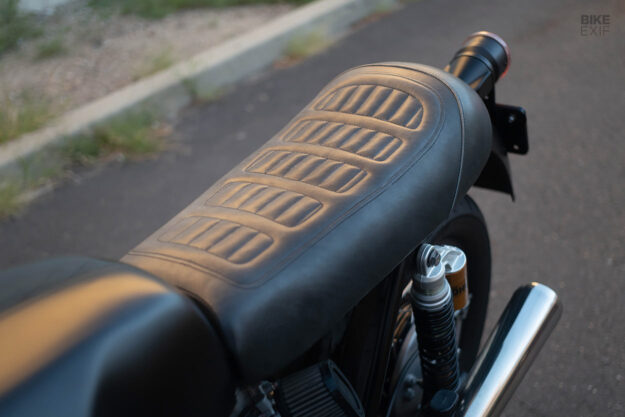 With the main aesthetics sorted out, Peter turned his attention to the Ducati’s running gear. The non-Desmo 900 GTS motor already fit in nicely with his economical-and-minimalist approach, so Peter chose to keep it simple with a basic refresh. (It helped that it had barely any mileage on it.)

New bearings and seals went in, but the internals were kept completely stock. Peter added a touch of performance via a pair of 36 mm Del’Orto carbs, topped with K&N filters and a set of Staintune Conti exhaust pipes. A Silent-Hektik ignition and Nology Pro-Fire coils were installed for added reliability. 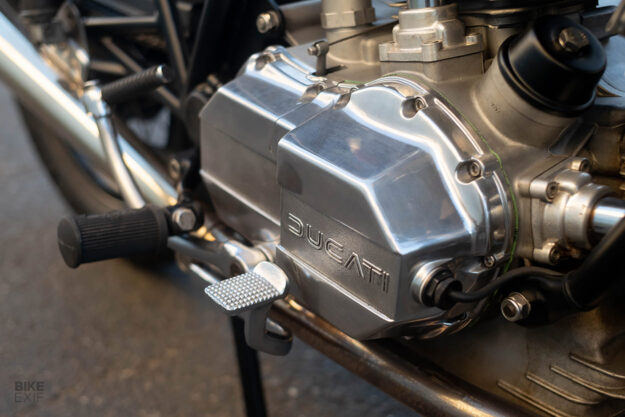 From there, Peter set to work preserving as much of the 70s Ducati charm as possible, while modernizing the bike where he could. Vintage-style single-pot Brembo calipers were installed front and rear, running through Spiegler lines. Modern Brembo radial master cylinders were fitted for an optimal blend of old and new, and a modern Kawasaki clutch perch was added to accommodate a matching Brembo clutch lever.

The OEM front forks stayed on the bike, but the internals were replaced with Works Performance springs. A pair of Öhlins shocks with piggyback reservoirs were fitted to the rear. The stock lights were given a refresh, but Peter left the faded CEV tail light lens in place to maintain an old feel for his new machine. 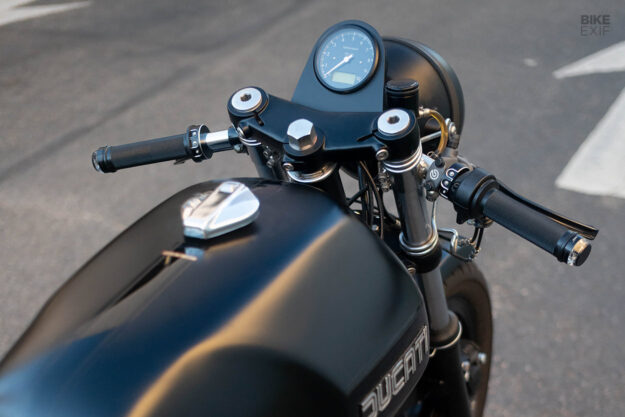 Finally, Peter turned his attention to the electronics. The decision was made to spec a full Motogadget system for the build, with the German company’s dash, turn signals, and switches all running through their mo.unit control box. It makes for a super-clean look, with all-weather reliability.

“The idea was to pay homage to the design of the past,” he says. “The greatest compliment would be someone looking twice at it, and not being certain whether it is a newly built motorcycle or completely vintage.” 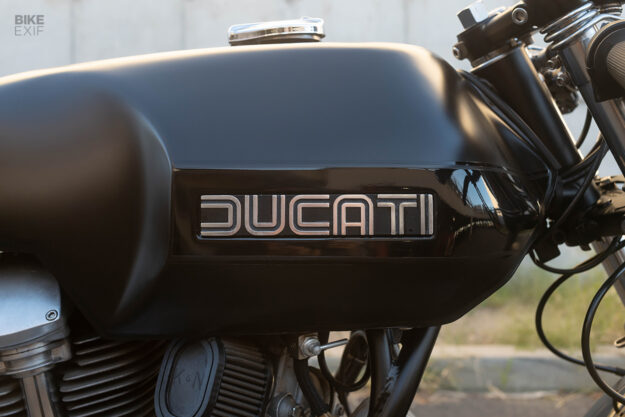 The end result is a stylish—yet ridable—bevel-drive Ducati, which Peter says “reeks of quality and 1970s Italian attitude.” We couldn’t agree more, and we’re not the only ones that think so—a friend of Peter’s saw this build at Moto Borgotaro, and immediately commissioned one of his own.

If you’re feeling left out, there’s good news: this particular Ducati 900 GTS is for sale via Moto Borgotaro’s website. If you fancy your custom bikes with a touch of utilitarian flair, it’s ready to ship anywhere on the planet for just $30,000—and with just 3,047 miles on the clock. 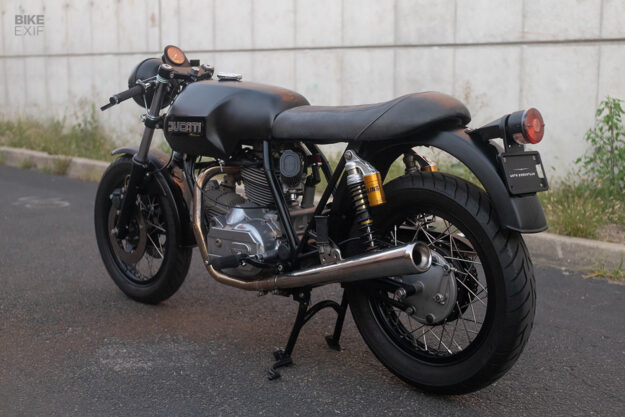