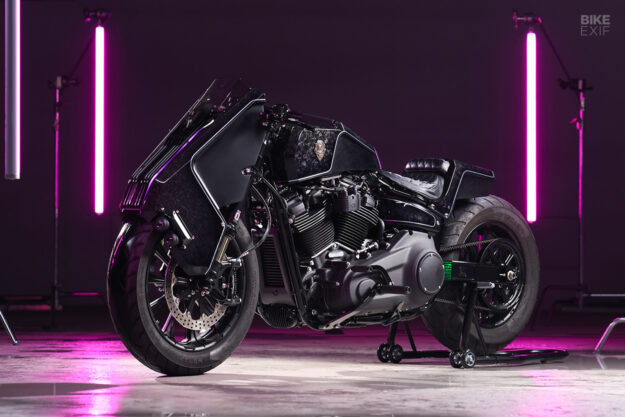 The Harley-Davidson Street Bob is one of the most stripped-down big cruisers that The Motor Co. sells. With trimmed bodywork, little to no passenger accommodations and the tiniest speedo we’ve ever seen on a factory bike, there’s very little to remove if you’re customizing one. Which is exactly why Winston Yeh of Rough Crafts in Taiwan loves working with it.

For his latest project, Winston took a stock 2020-model Street Bob, and turned it into a sci-fi-infused custom that looks like it rolled straight out of a video game. This bold aesthetic has a lot to do with his client; the bike was built for Cooler Master, a major manufacturer of computer cases and peripherals. 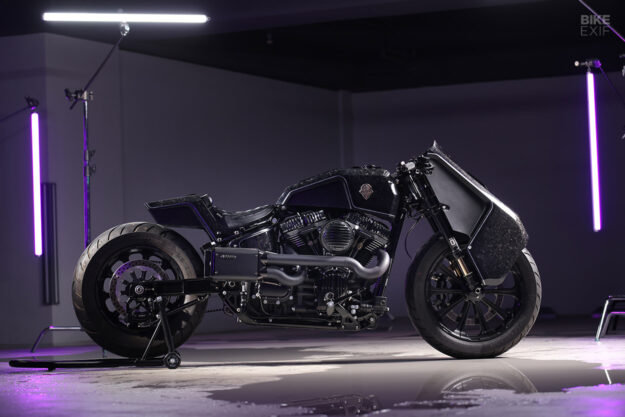 They’ve been in business for 30 years, and are huge in the gaming community. Wanting a rolling showpiece to commemorate this milestone, they turned to Rough Crafts.

“For their 30th anniversary, Cooler Master asked me to build a bike and matching computer case to celebrate,” Winston tells us. “I set out to combine signature elements of both worlds—the brand’s signature purple lighting, and the sharp edges and boxy shapes that are found on most Cooler Master cases. Plus Rough Crafts’ signature fin details, with lots of forged carbon fiber.” 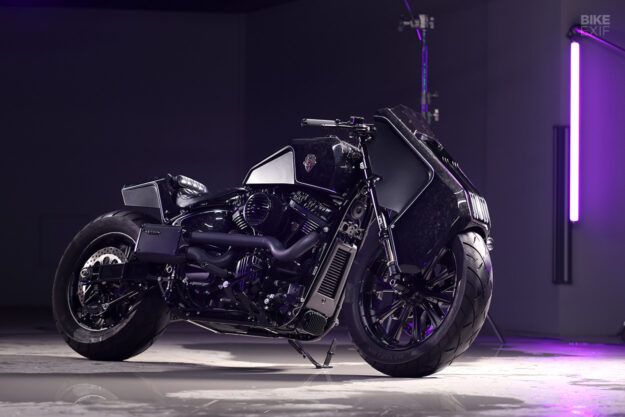 Nicknamed the ‘Cosmos Charger,’ this Street Bob is wild, futuristic and loaded with really thoughtful details. We were lucky enough to catch glimpses of Winston’s early design drafts, and witnessed first hand how he agonized over finding the balance between cool and clichéd. After all, how do you add LED lighting to a vehicle without making it look like a wannabe street racer?

Luckily Winston figured it out in the end. There are shades of other Rough Crafts builds here—like the heavy scalloping on the fairing, tank and tail. But the closer you get, the more you spot subtle touches that convey the vibe of Cooler Master’s products. 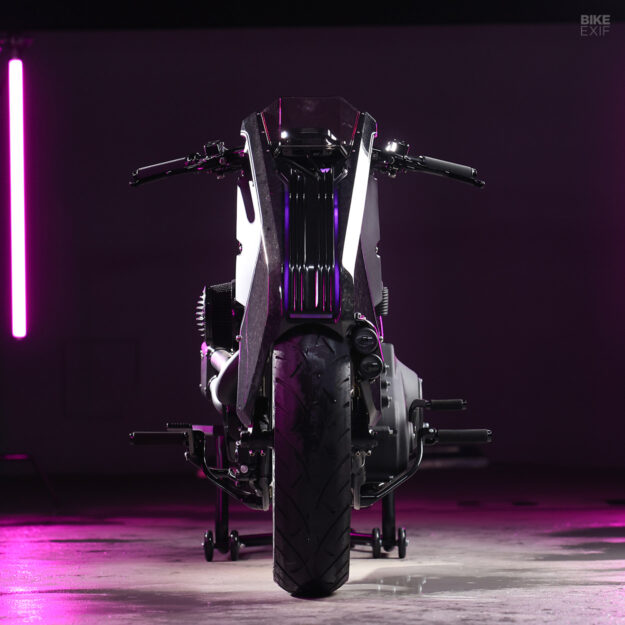 To pull it off, Winston turned to 3D design and printing. Given that he’s worked on numerous Milwaukee Eight Softails already, he now has their chassis 3D scanned and ready to ‘build’ on. The fairing, tank and tail were all designed digitally, then 3D printed in a high-end polymer.

From there, Winston turned to regular collaborator, SFC Simon Fiber Craft, to wrap each part in forged carbon fiber. It not only added an extra layer of material, but also created the stunning marbled texture you see on each part. 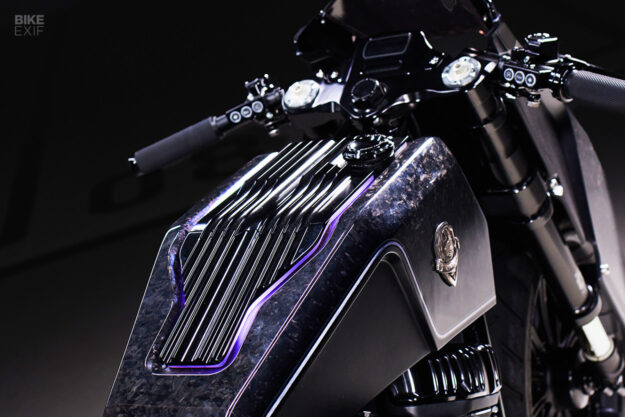 Running up the middle of the fairing, over the top of the tank and onto the tail is a series of CNC aluminum fins. Backlit by purple LEDs, they’re a nod to computer heat sinks. The tank itself is actually just a cover though, with a custom-built aluminum fuel cell hiding underneath it.

The bike’s primary lighting all comes from Koso. There’s a pair of LED projectors up front, and LED turn signals at both ends, with the rear pair doubling up as taillights. 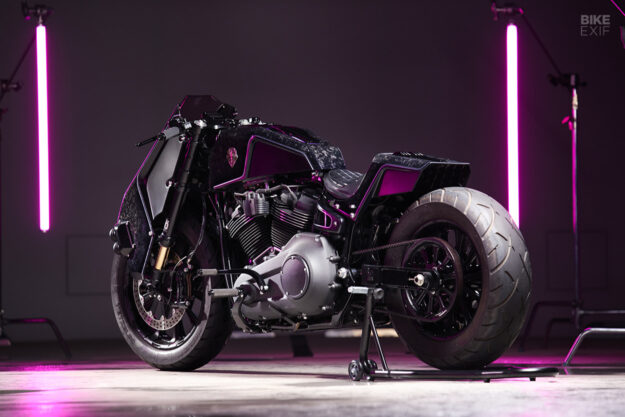 Lurking below the bodywork is a host of sweet chassis upgrades. Rough Crafts installed a new set of Öhlins forks, held in place by custom yokes. An Öhlins shock connects to a new swingarm from The Speed Merchant.

The wheels are from Performance Machine, measuring 18” up front and 16” out back. The tires are Metzeler ME888s, while the braking setup matches Beringer calipers to Performance Machine discs. Rough Crafts upgraded the clutch to a hydraulic setup from Rebuffini too. 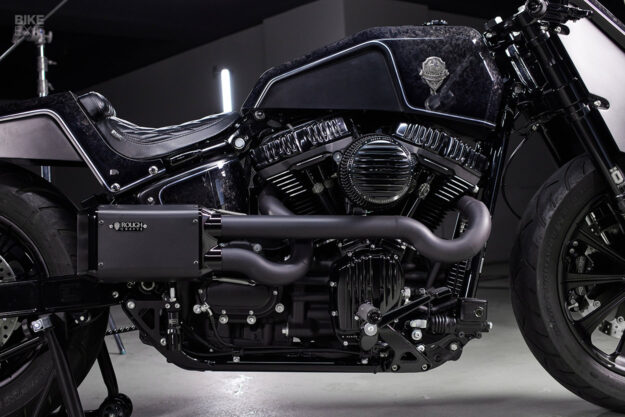 The Street Bob’s engine wears Rough Crafts x Arlen Ness foot pegs, grips, and rocker box and cam covers. The handlebars and finned air filter are Rough Crafts parts, while the switches are from Rebuffini. They’re totally plug-and-play too, designed to integrate directly with the Harley’s CAN bus system.

Winston roped in his usual dream team of collaborators to push the build over the finish line. MS Pro handled all the fabrication—including the custom exhaust and its burly box muffler—while CT-Garage took point on the final assembly. 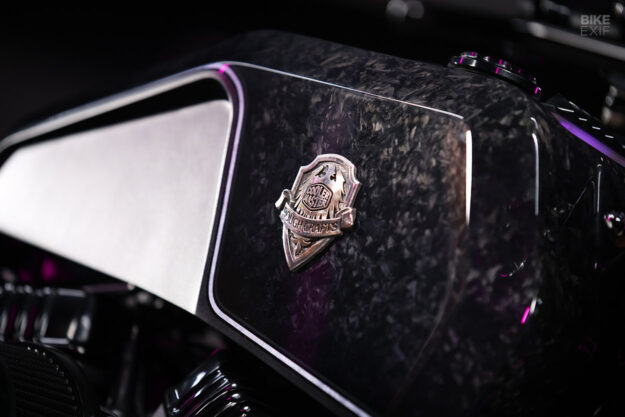 It’s exactly the sort of attention to detail that we’ve come to expect from Rough Crafts. This Street Bob might not be everyone’s cup of tea, but there’s no denying that it’s as cohesive as it is menacing. From front to back, every part here feels like it belongs. 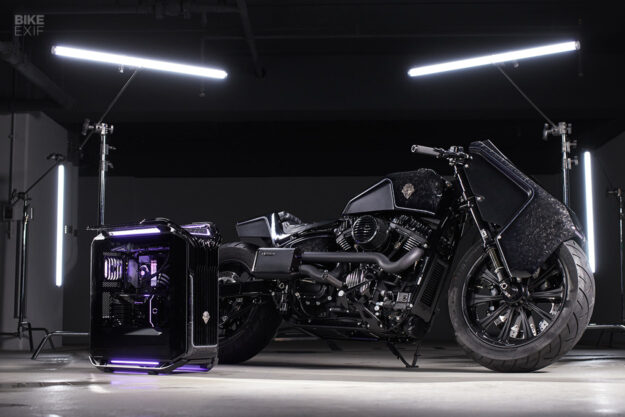 The Cosmos Charger actually looks like it’d be totally wild to ride too. Winston may have designed this custom motorcycle for a computer parts company, but we’d take it out on the streets in a heartbeat.