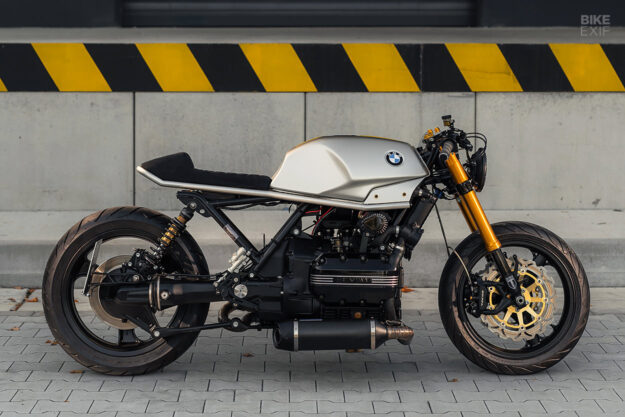 It’s no longer uncommon to see old K-series BMWs go under the knife. But that doesn’t mean that every custom K is a home run. It remains a tricky bike to customize—and it takes a keen eye to get it right.

There’s no doubt that Chris Scholtka, better known as Motocrew, has cracked the code. Based in Cottbus in northeastern Germany, Chris is a firefighter that creates custom motorcycles in his spare time. His vibe is minimalist and modern, with an emphasis on aggressive lines. 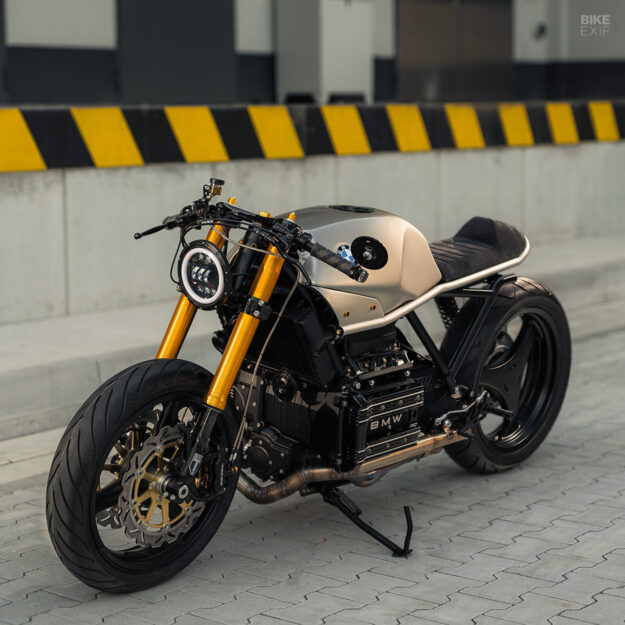 The visual trickery that Chris has employed on this 1985 BMW K75 is inspired—but this job was more than just a makeover. The donor bike was in a less than ideal condition, so Chris first had to split the cases to make sure it wasn’t a total dud.

“The engine was rusty on the outside, and full of dirt and oil from the last 30 years,” he says. “The speedo was lost, so it wasn’t possible to check the mileage for a quick assessment. I was flying blind on this build—I didn’t even know if it would start or not.” 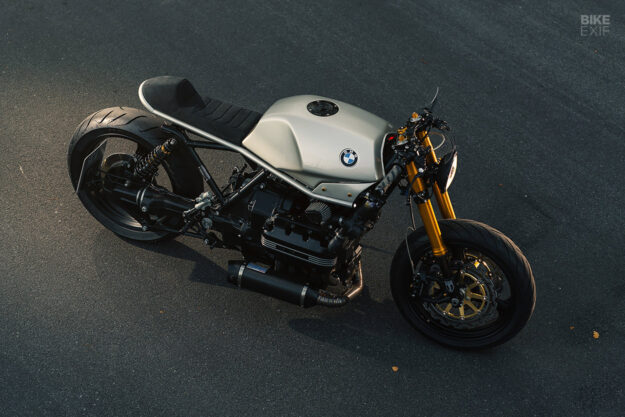 Chris got lucky; the engine looked better on the inside. All it needed was new gaskets, O-rings and fluids, and a major scrub-up on the outside. He also deleted the airbox, replacing it with a DNA Filters pod filter.

The exhaust is custom—a pie-cut stainless steel affair that took about 22 hours of welding and cutting to construct. It snakes around the bottom of the K’s bricky engine, termination in a Leo Vince silencer on the right side. The placement was a deliberate move, to keep the rear wheel fully in view. 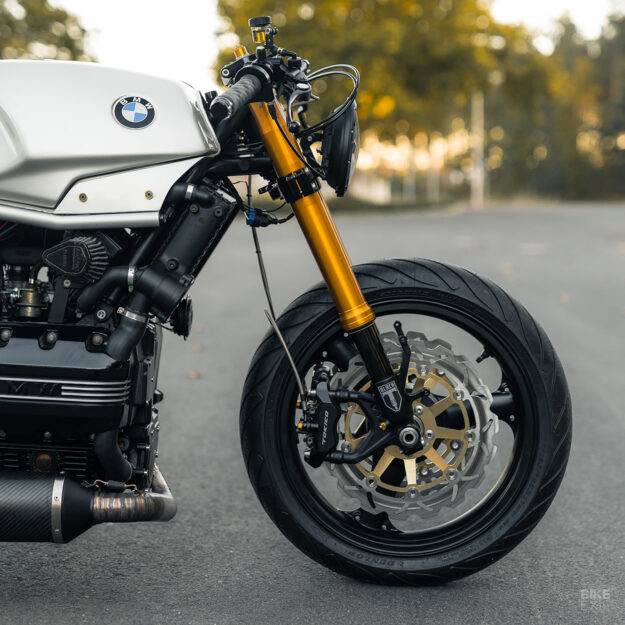 None of the K75’s running gear remains. Chris swapped the front-end out for the setup from a 2013-model Kawasaki ZX-10R, including its forks, twin disc brakes, clip-ons and three-spoke alloy wheel. The fork stanchions were treated to a black low-friction coating.

There’s a matching three-spoke wheel at the back, but it’s from a completely different bike. Chris borrowed it, and a longer final drive arm, from a newer BMW K1100. The fully adjustable rear shock is from the German suspension company Black-T. 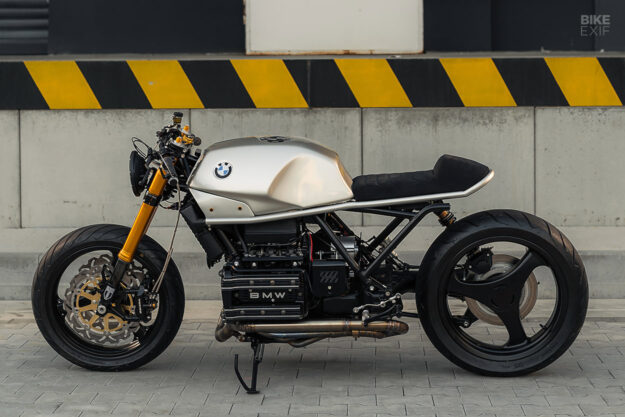 Higher up, Chris lopped off the end of the subframe, then bolted on a new full-length unit to anchor the bike, visually. It sounds like a cheap trick, but it works brilliantly. Since the new subframe’s silver coat stands out against the black main frame, your eye is naturally drawn to the sharp baseline that it creates.

Chris has used this method before, but he’s tweaked the design for this particular project. “It’s my way of hiding the ugly original rear frame of the K-series,” he quips. 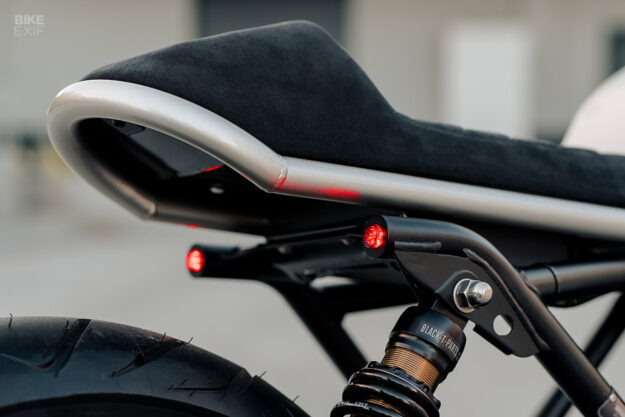 Perched on top is the BMW’s OEM fuel tank, lifted slightly in the rear to further improve the overall silhouette. A pair of custom-made side panels tie the frame to the tank, while a custom seat finishes off the back half.

Chris capped the OEM subframe tubes off with a pair of taillight and turn signal combo LEDs. The license plate sits further down, on a custom-made bracket mounted to the swingarm. Further forward are new rear-sets from the K-series specialist shop, Powerbrick. 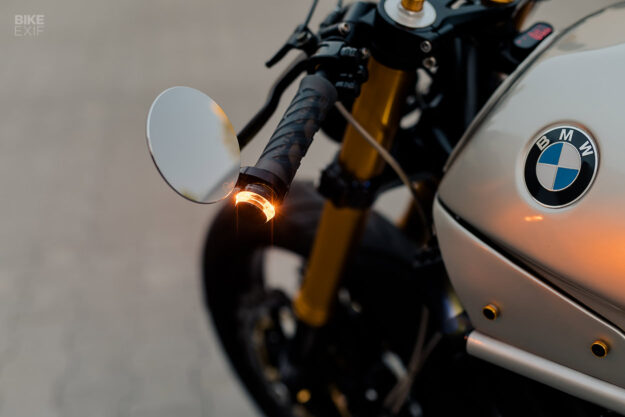 There’s an LED headlight up front, with a pair of daytime running lights embedded in the tubes of the new subframe. The handlebars wear Motocrew branded grips from Hookie Co., along with Motogadget switches and bar-end turn signals. If you’re looking for the speedo, it’s mounted in front of the fuel tank; a tiny digital unit, also from Motogadget.

Chris is a fan of the German company’s electronic components, so he also rewired the bike around their mo.unit blue control box. A tiny battery is tucked away under the tank, and the bike is switched on via a keyless RFID system.

If you’re looking for the freshest custom K-series blueprint, this might just be it. 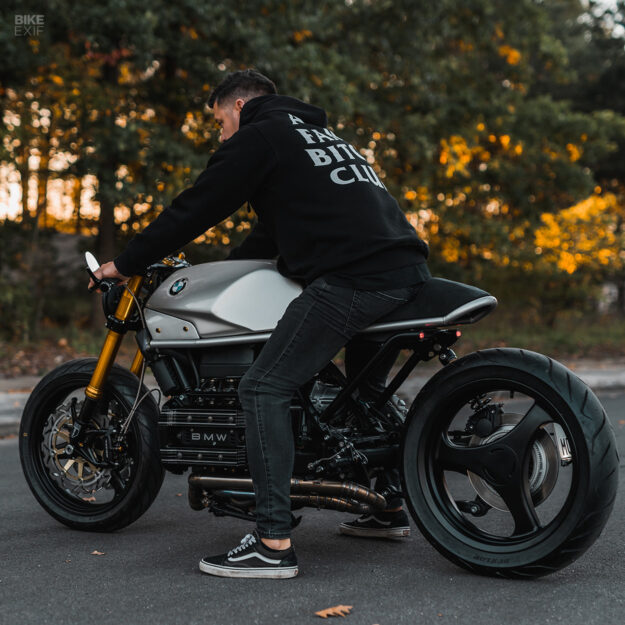