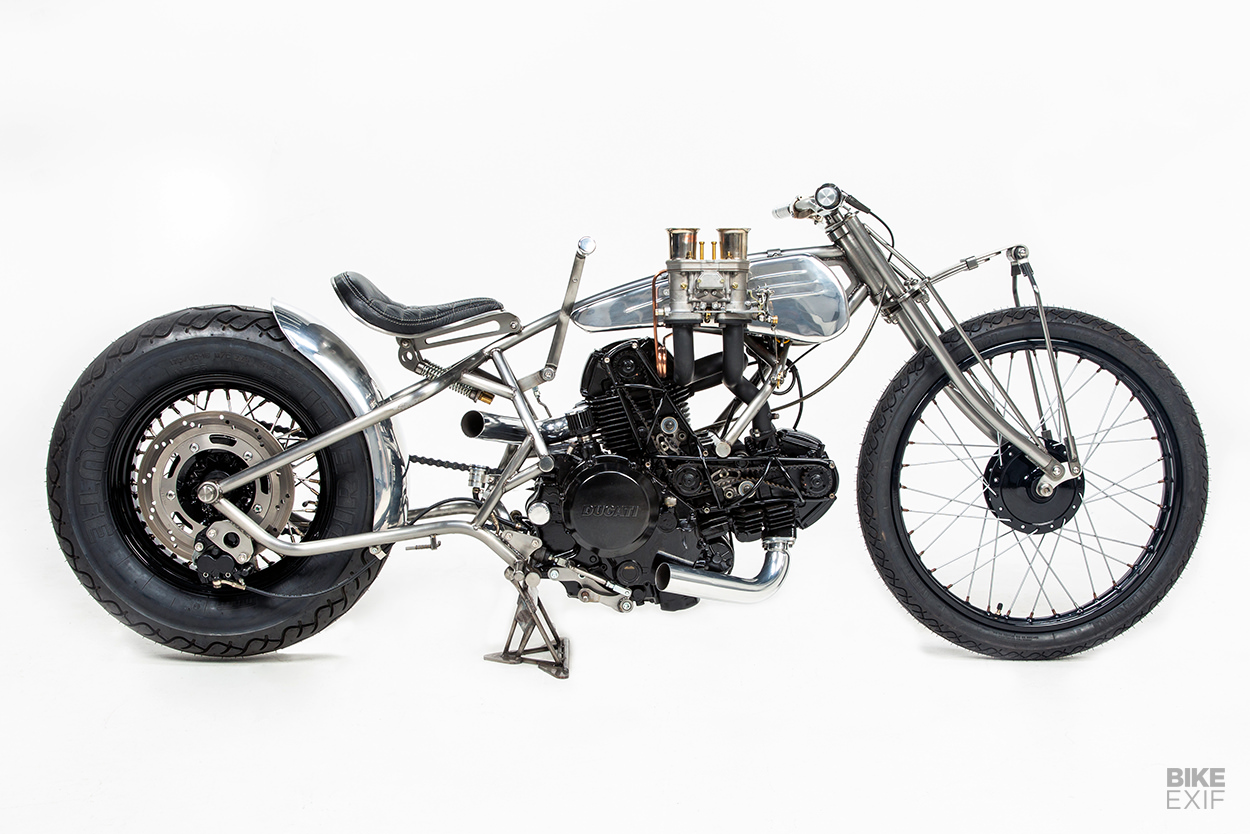 We’d love to take a peek inside Edi Buffon’s mind. The Sydney-based custom builder specializes in bobbers that deliberately eschew practicality in favor of playful engineering. And each one is more interesting than the last.

This Ducati-powered hardtail is the latest bike to roll out of Edi’s Machine 1867 workshop. And true to form, it takes a few passes to notice all the obsessive little details. 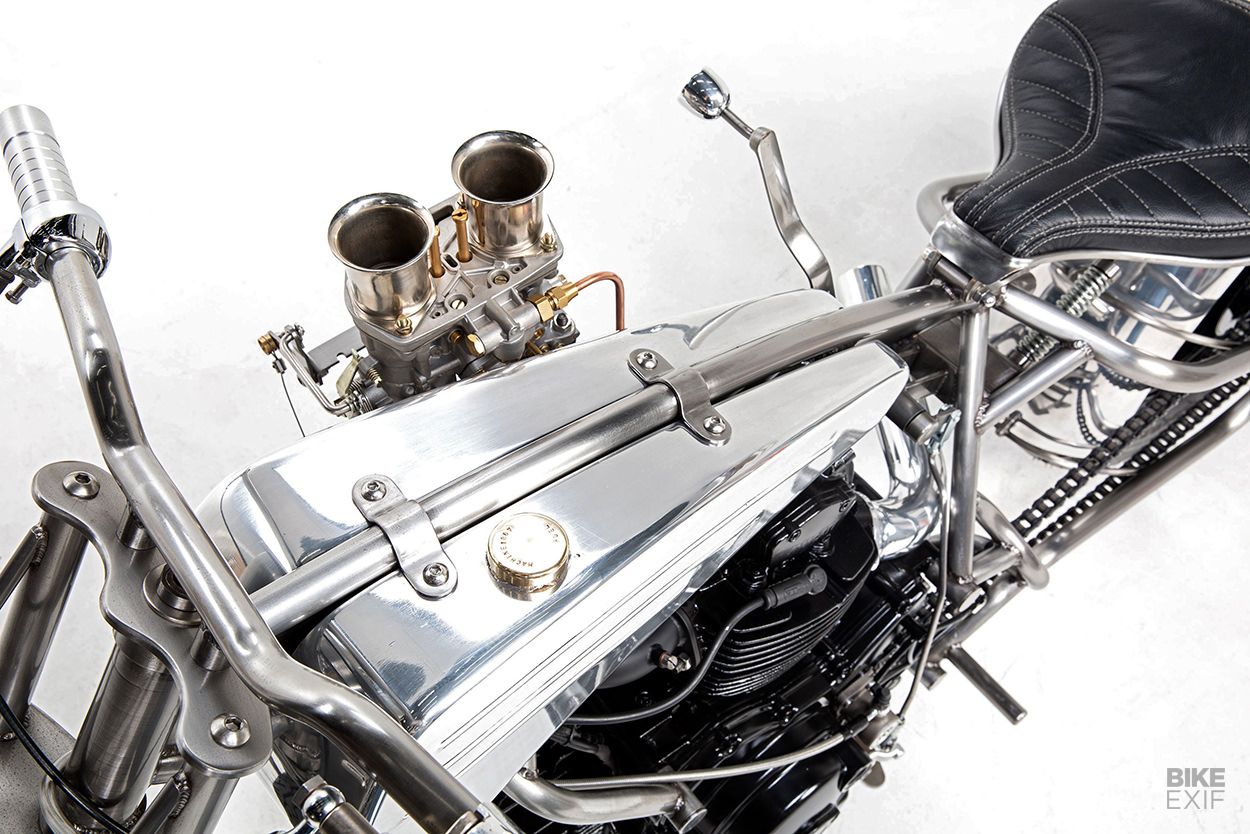 “The goal was to reveal the potential of a Ducati engine in a traditional style rigid frame,” says Edi. “My last KTM bobber build was, by my definition, a conservative project. I decided to do what I love best, and make something over the top and impractical.”

Edi started with a good condition 618 cc L-twin motor from an early 2000s Ducati Monster 620. Then he set it up on his workbench, and started visualizing the project. 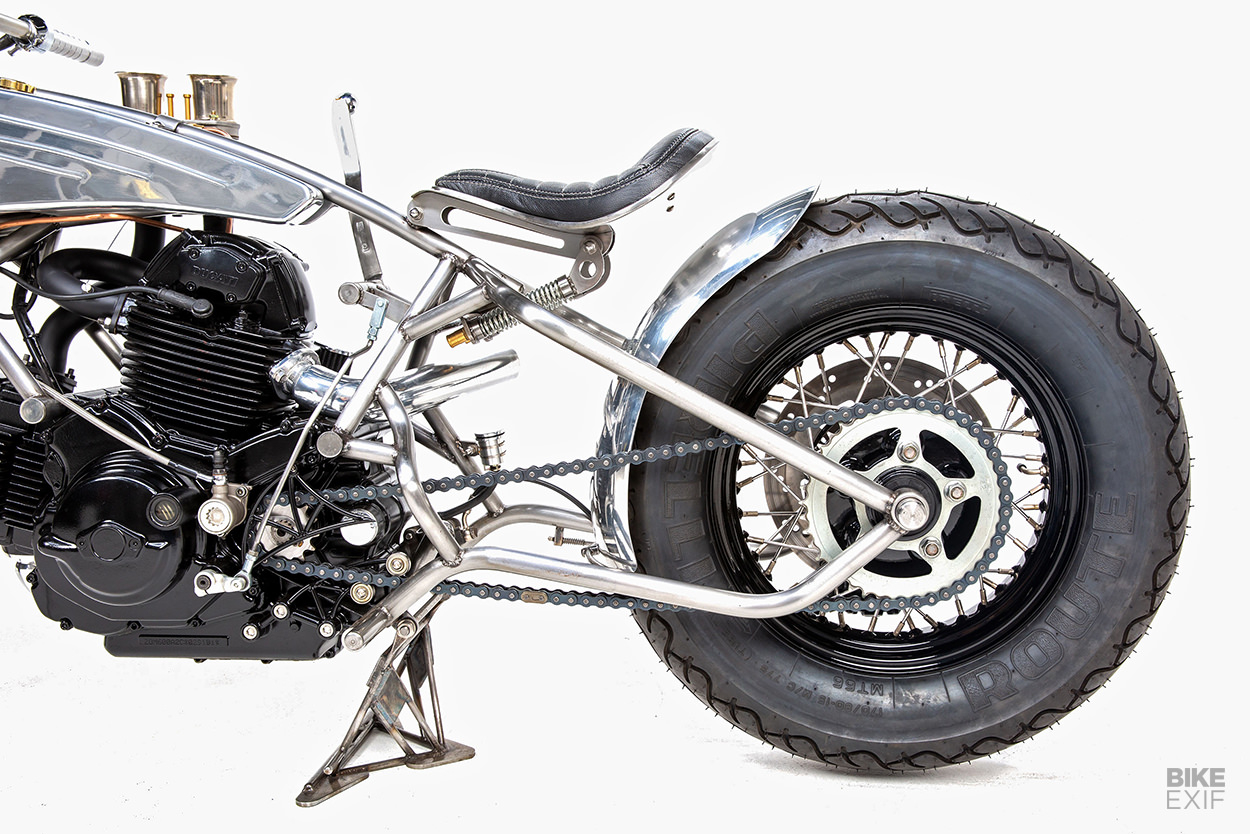 “The 15-inch rear wheel is from a Triumph America and was initially for my personal Bonneville T100 project, but when I sat it up on the bench and stood back, it looked awesome,” he says. “I also have an old, drum-braked 21-inch motocross wheel that I use for mock ups—but that looked the part too, so I used it for the build. ”

“With a wheelbase of 1,500 mm set, I went for a rake of 38 degrees and started bending some tube. I know what works—now that I have built a few of these—so the frame was built easily and quickly. Then came all the details and adding the functionality.” 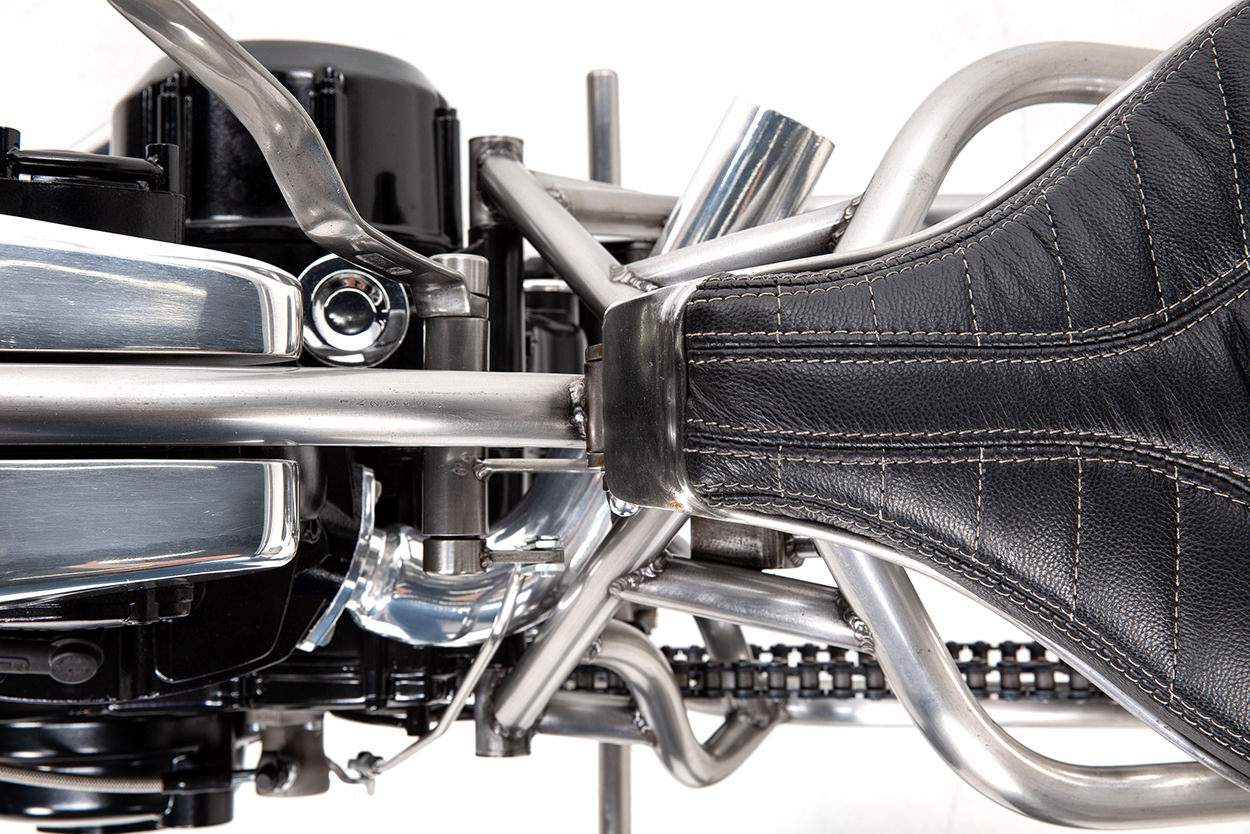 “Easily” is a relative term for Edi, because this bobber’s chromoly frame is far from ordinary. It’s an intricate design, with the motor suspended in the middle and the rear end taking on a flowing form. The front suspension is custom too, using a leaf spring design that Edi’s grown fond of.

“It took some effort to get it dialed in, by adding, removing and shortening the leaf to get it to work,” he tells us. “The Ducati engine is deceptively heavy.” 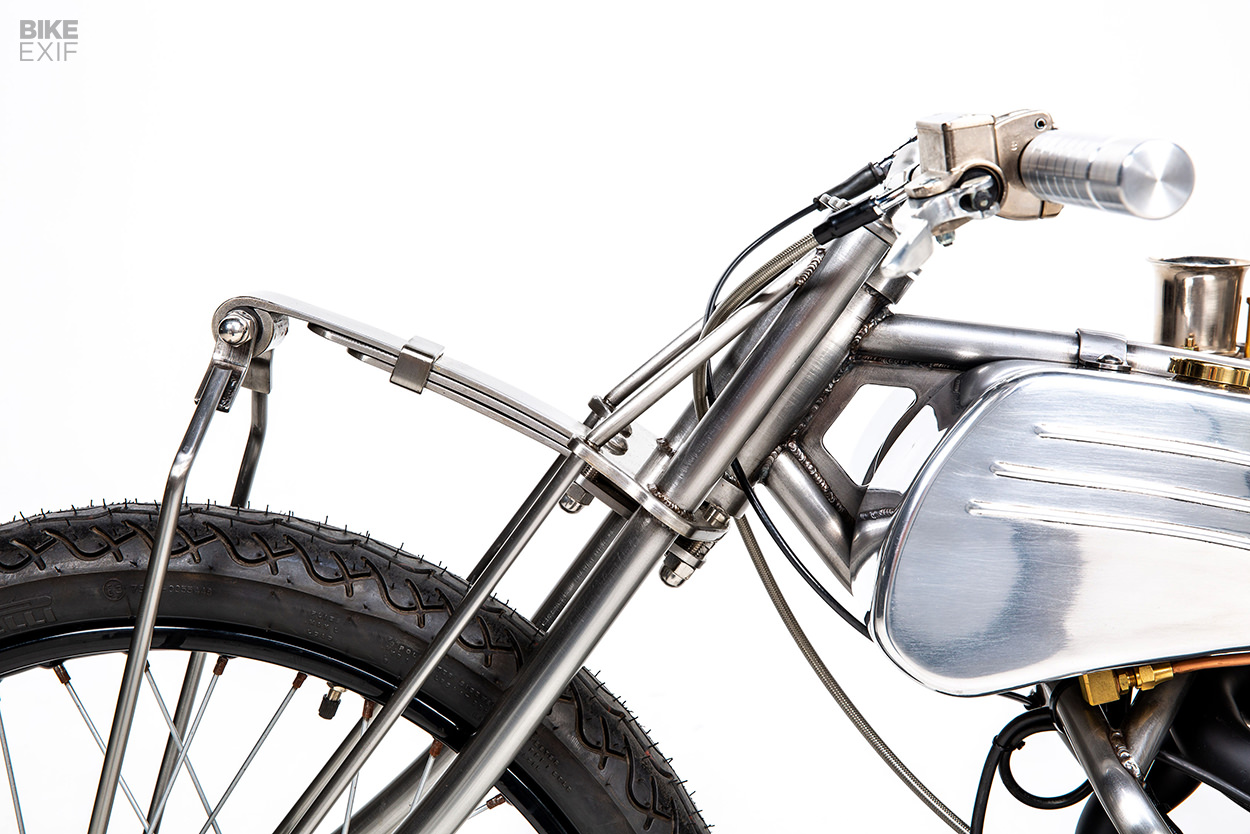 The front wheel drum brake is now gone, and Edi has repurposed a Triumph disc brake caliper and master cylinder at the rear. All the brackets and linkages are handmade bits, and, if you look closely, you’ll notice that the foot pegs are welded directly to the frame.

There’s no shifter nub on the opposite side, because Edi’s set this one up with a right-side hand shifter, “just to add to the impracticality.” There’s a hydraulic clutch where you’d expect to find it—on the left side of the custom direct-mount handlebars. The cockpit is super sano, with nothing more than the clutch, a pair of aluminum grips and a single cable throttle. 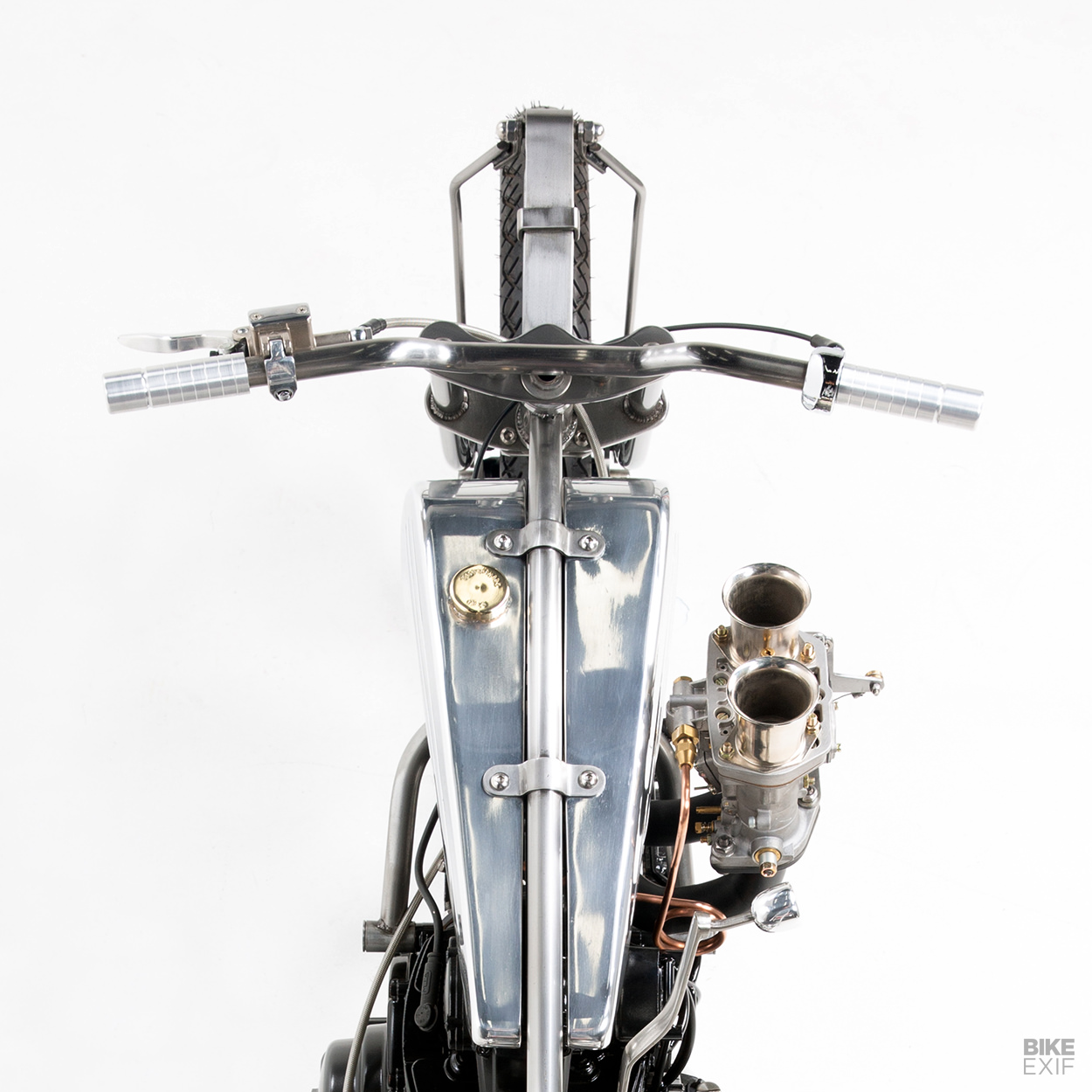 Just behind it is a pair of aluminum tanks. Only the left side holds fuel; the right side houses the bike’s electronics. The only other piece of bodywork is a tight rear fender.

The seat’s another interesting arrangement. Edi fabricated the seat pan and did the upholstery himself, and mounted it on a totally over-engineered spring system that even includes a pair of brass tension adjusters. 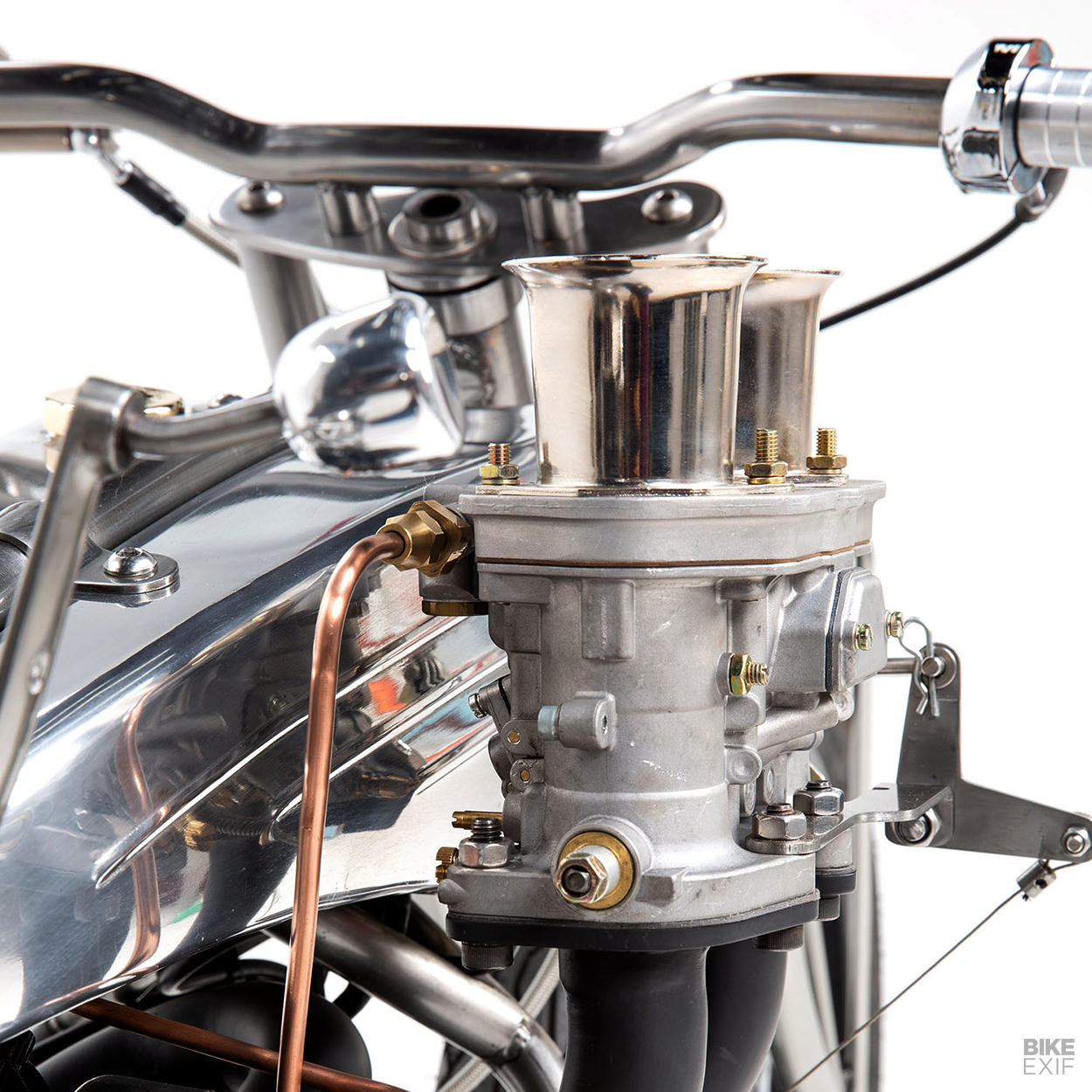 One of the Ducati’s standout features is its intake system. “I wanted to use a Weber carb for the aesthetic,” says Edi, “and decided on a downdraught type. I made the intake headers from mild steel and had them ceramic coated in black to blend in with the engine.”

It’s a stunning addition, complete with details like a copper fuel line and a small brass pulley to direct the throttle cable. Edi admits that the system isn’t perfect, and plans to add a fuel pump too at some point. The engine’s also dressed with a beautiful trellis-style guard belt guard, and a pair of short, obnoxiously loud exhausts. 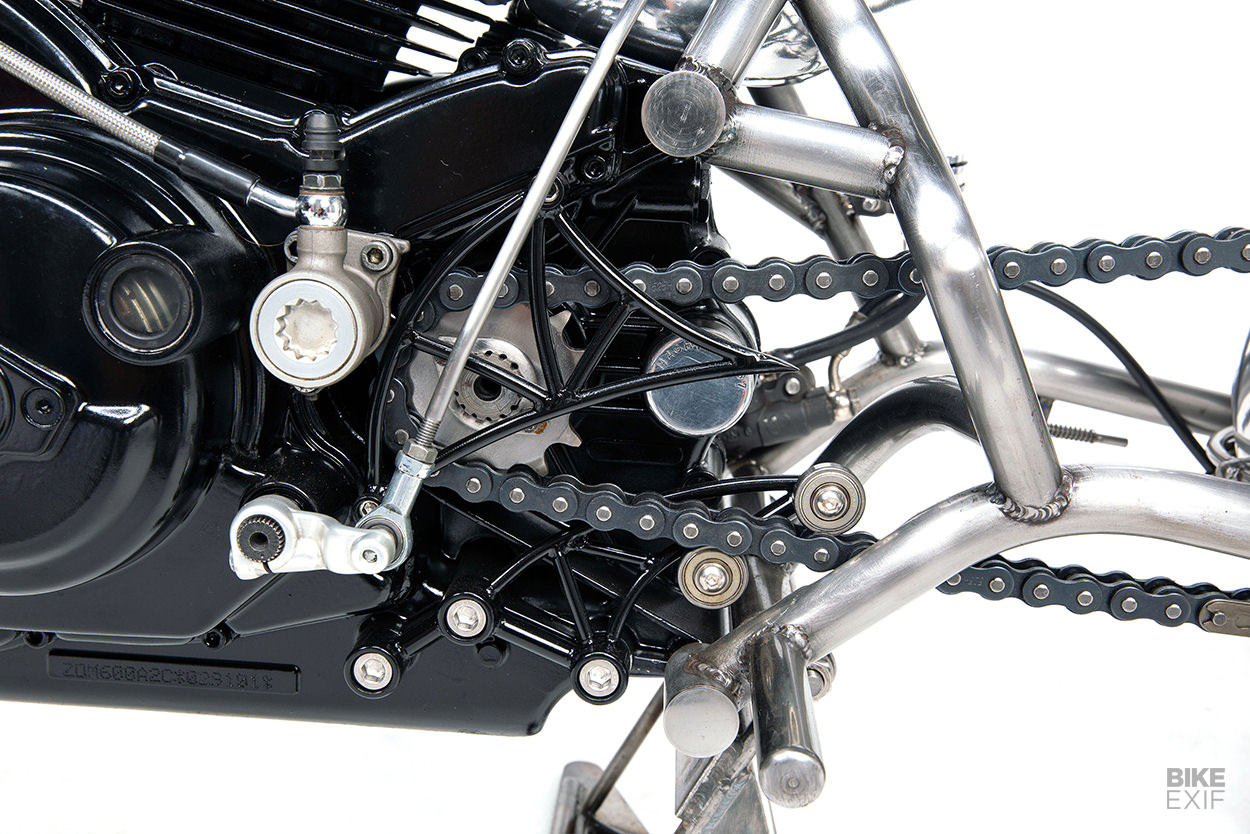 As with all of his builds, Edi did everything here with his own hands, outsourcing only powder coating work. The finishes are simply black and metal, with the frame sanded down and then coated with clear Penetrol.

Both elegant and complex, Edi’s Ducati is another top build from a dude who’s clearly having the time of his life. We can’t wait to see what wild contraption he dreams up next. 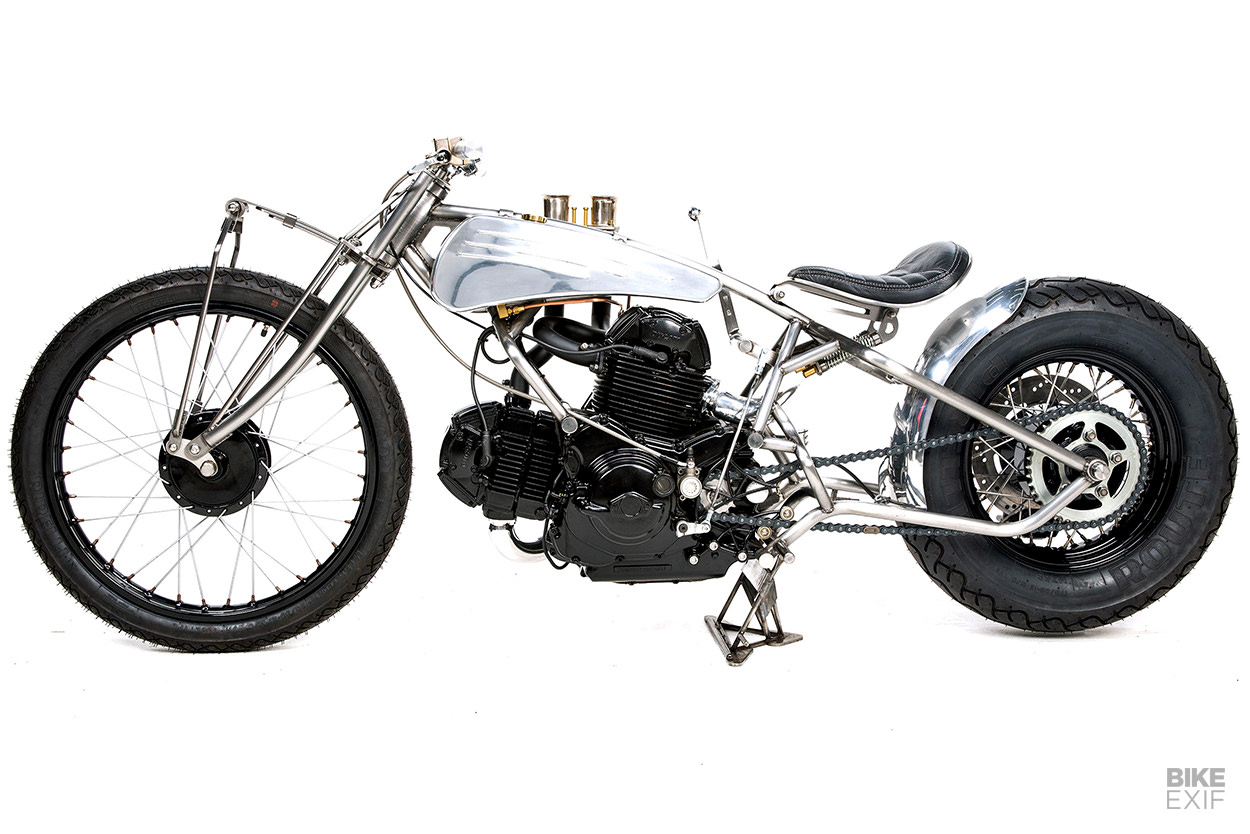