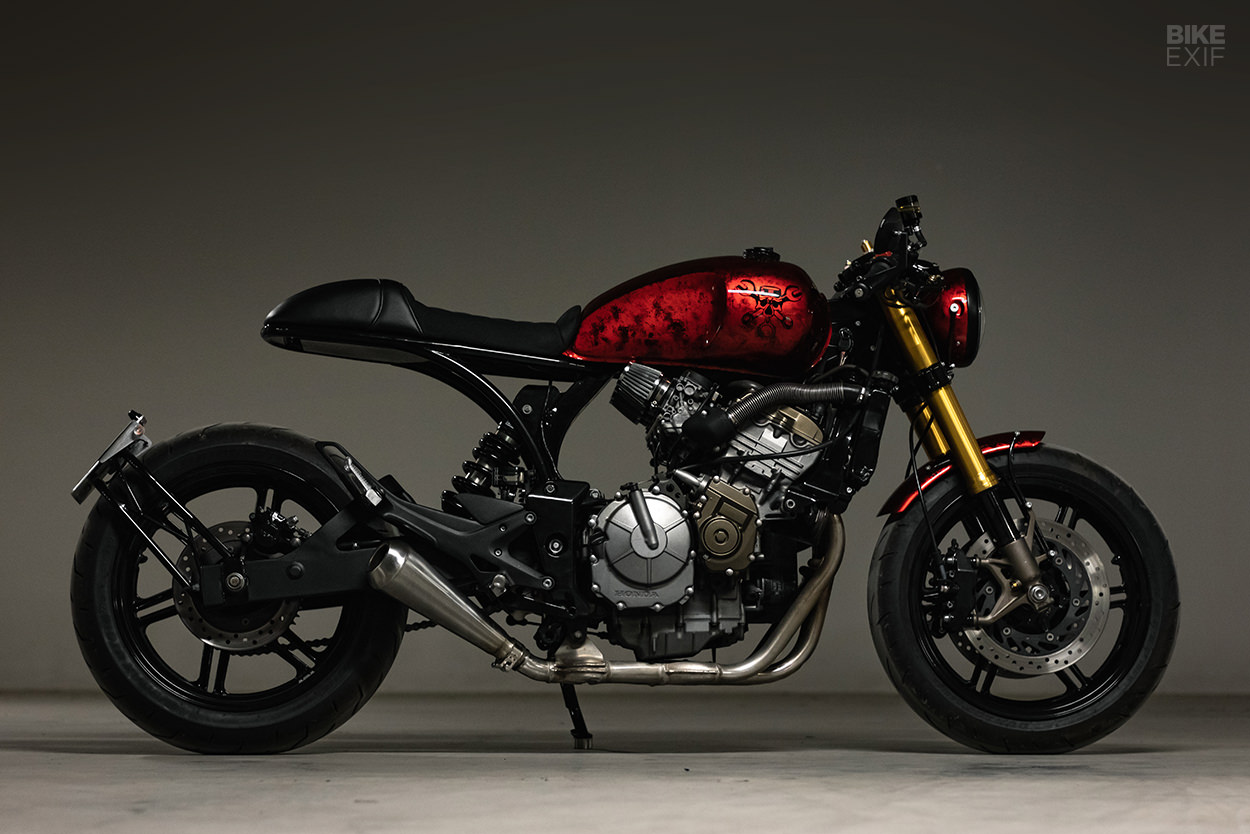 It’s always a pleasure to stumble across a new custom workshop, especially when their work is top-notch. And if the donor bike is a little out of the ordinary, that’s extra marks all round.

This eye-catching CBF600 comes from an outfit called Custommade C.A. They’re based in Athens—the one in Greece, not Georgia—and this Honda is the latest in a steady stream of sleek, well-finished customs. 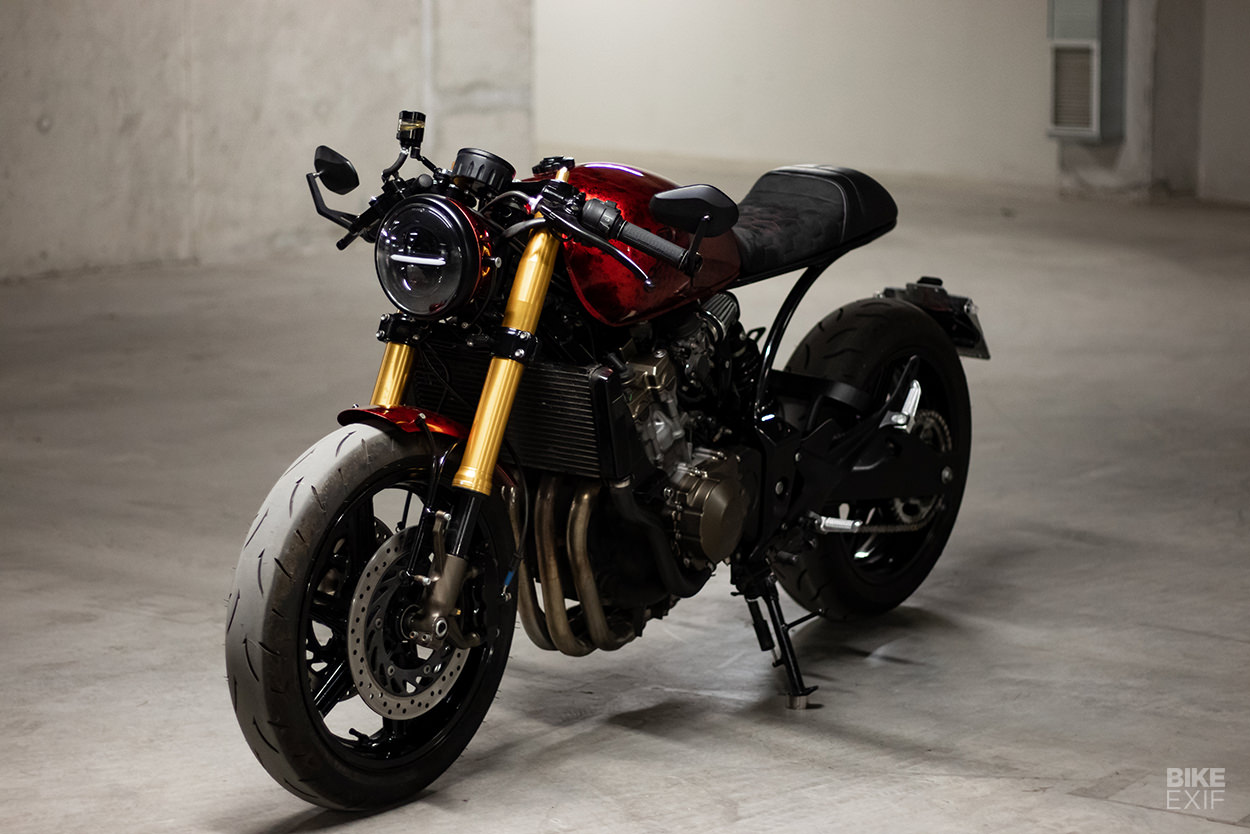 “We build motorcycles in a small garage,” says founder Chris Foskas. “We’re three guys, and we all have regular jobs. Fast and beautiful motorcycles are our passion, so we turned it into our hobby.”

We don’t see many customs based on the CBF600, which is surprising. It’s a well-made but slightly dull machine—like many middleweight Honda commuter bikes of the past few years. The engine is a detuned version of the inline four used in the 599/CB600F Hornet, so it’s a known quantity. 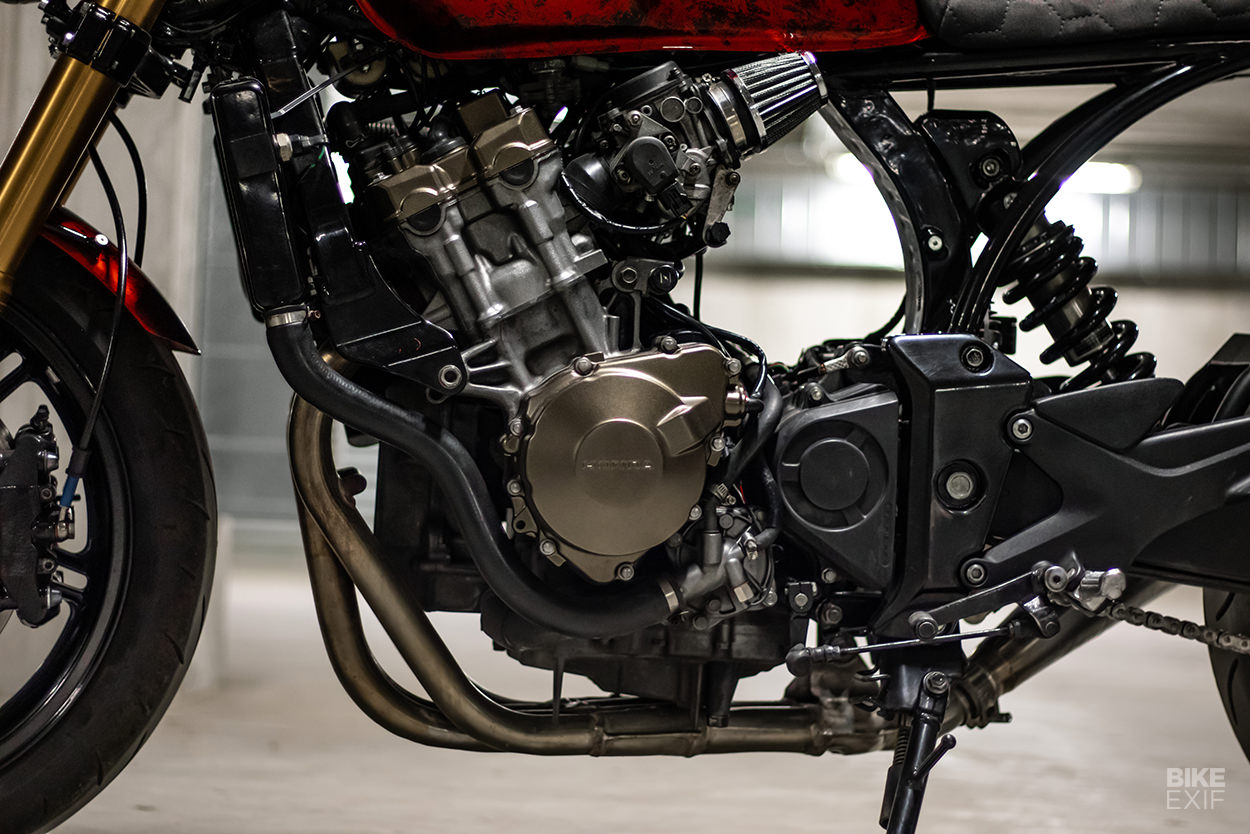 Foskas and his colleagues picked a 2004 model for this build: “It’s a reliable motorcycle that would also be a challenge,” he explains. “We wanted to transform it from a boring touring bike into something unique.”

The commission came from a friend—a photographer called Vasilis. “He decided to get his license and build the motorcycle of his dreams. We all agreed on the model, and started searching for a donor. We found one in bad condition, though the engine was running like a charm.” 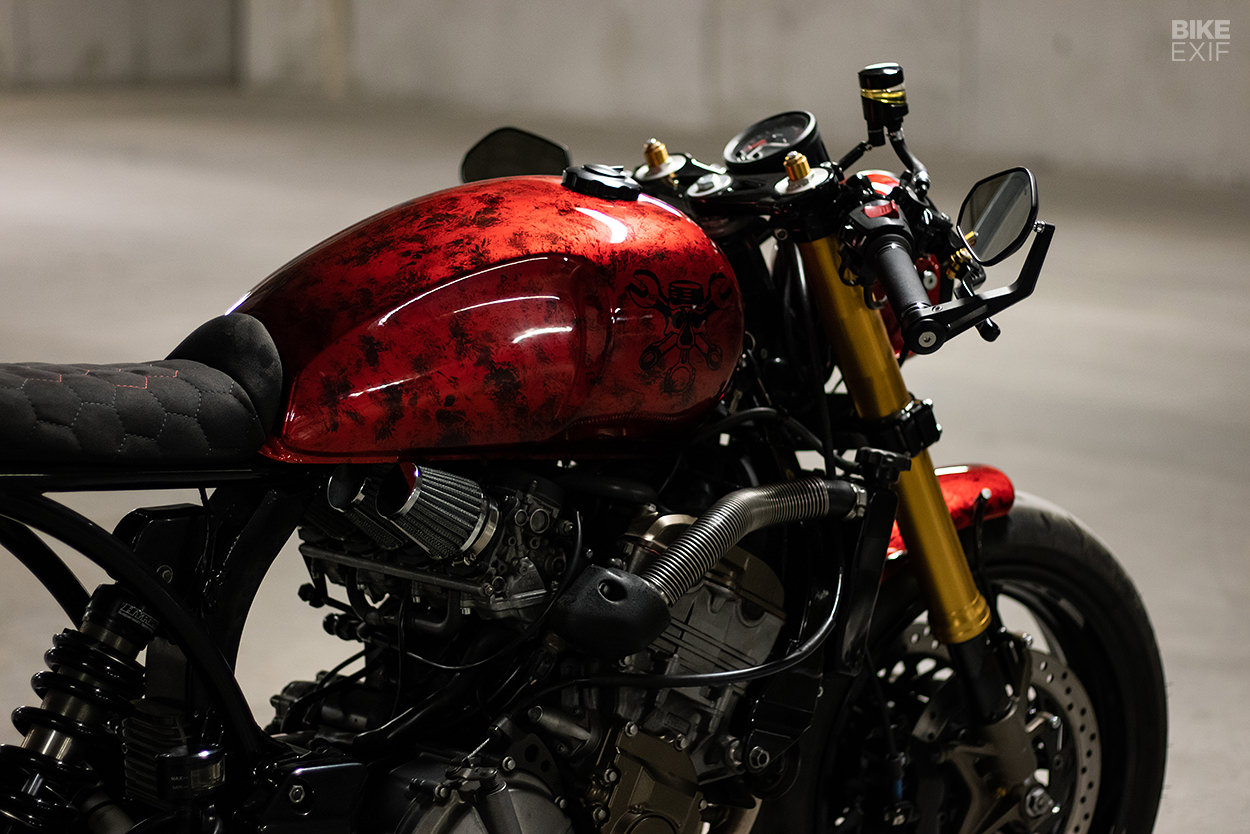 The finished build is immaculate, with a few tweaks to the usual formula. “We aimed for a cafe racer-style bike with clip-ons, clean looks, and upgrades to the suspension and brakes,” says Chris.

The twist is in the bodywork, notably the fuel tank. “We found it on eBay in the UK,” Chris reveals. “It’s a ‘universal’ Triumph-style tank with a fuel level sensor.” To get it to fit, Custommade had to modify the tunnel inside the tank, to create enough clearance for the frame. 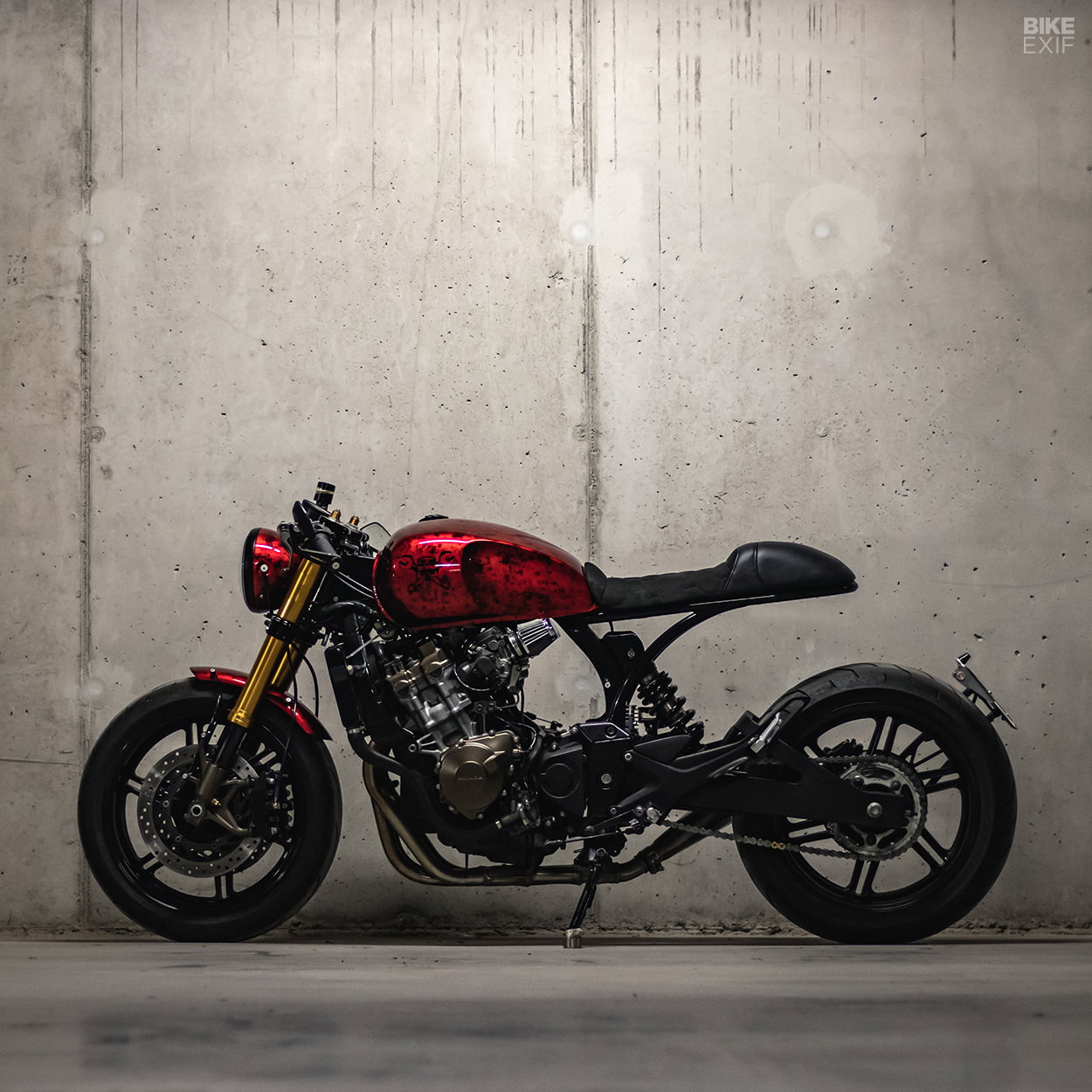 The seat is designed to carry a passenger, while keeping the look of a traditional cafe racer with a humped silhouette. It’s probably quite plush and comfortable, although you’d want to hold on tight to the rider.

The frame from the tank backwards is all new, and the crew cleverly designed it to mirror the curvature of the back wheel. Tucked in between the tubes is a fully adjustable Hyperpro shock, and there’s an LED taillight flushed into the rear frame loop. Clear epoxy resin inside a 3D printed ABS plastic housing holds the LED strip. “Then we sanded it until it matched the curvature of the subrame tube,” says Chris. “It’s almost invisible when it is turned off.”

The biggest mods are at the other end of the bike, though—with a complete front-end transplant from a Kawasaki Ninja ZX-10R literbike. That includes the radial calipers, the master cylinder, and the triple trees.

The trees have been sanded down for a smooth finish, and after a fresh coat of powder, the ZX-10R clip-ons went back in and a modern LED headlight was positioned in front of the stanchions. 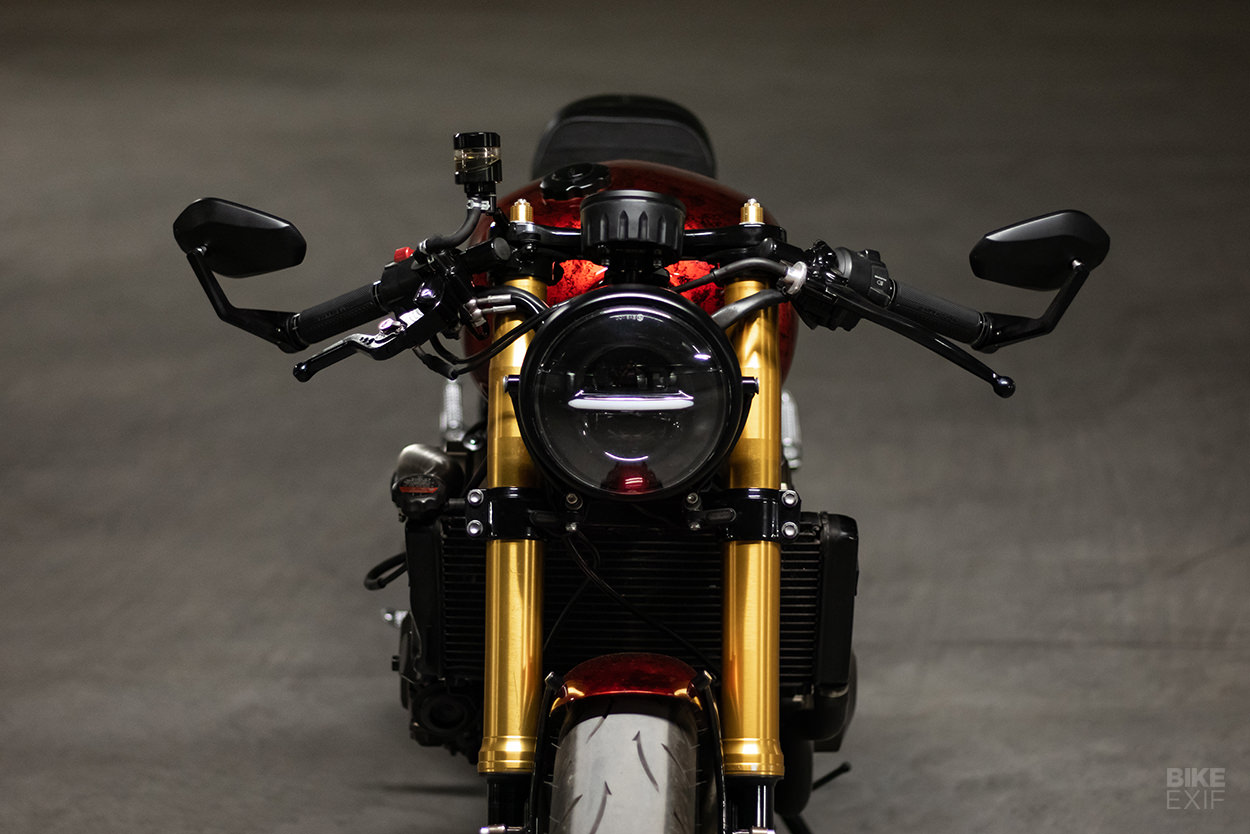 The switchgear is Honda but the grips are from the Italian Barracuda brand and the mirrors are from a Hong Kong brand called KemiMoto. “I found them on eBay and we liked the style of them,” says Chris. “They are nicely made from aluminum.”

The instrument panel has been swapped out for a single round Acewell speedo. (“It includes everything we need, from RPMs to water temperature and a fuel level indicator.”) 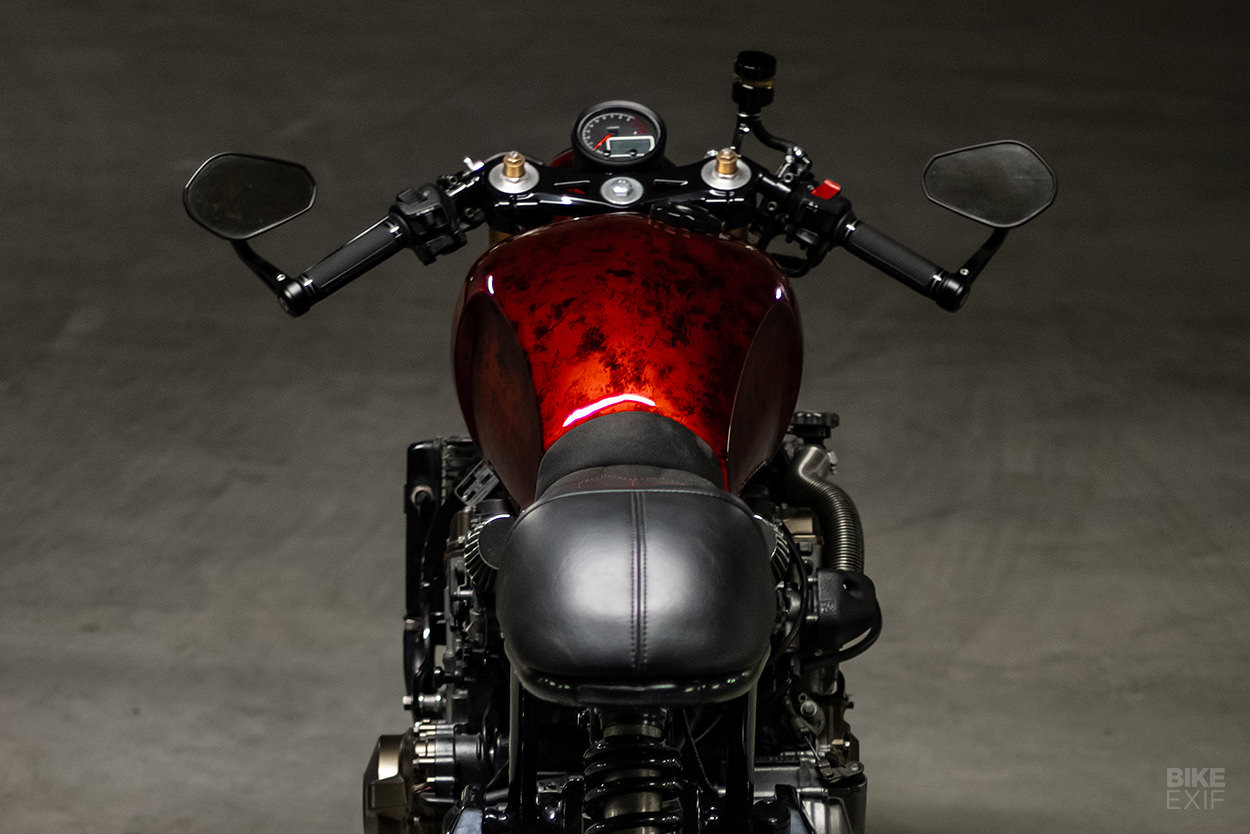 The wheels are stock Honda items though: “We chose the CBF600 instead of the CB600F/Hornet due to the wheels and the rear brake—there are no modifications there,” Chris reveals.

The swingarm is modified, however, with bracing to increase stiffness and add extra visual pop. And there’s a small but useful fender on custom brackets over the front slick. 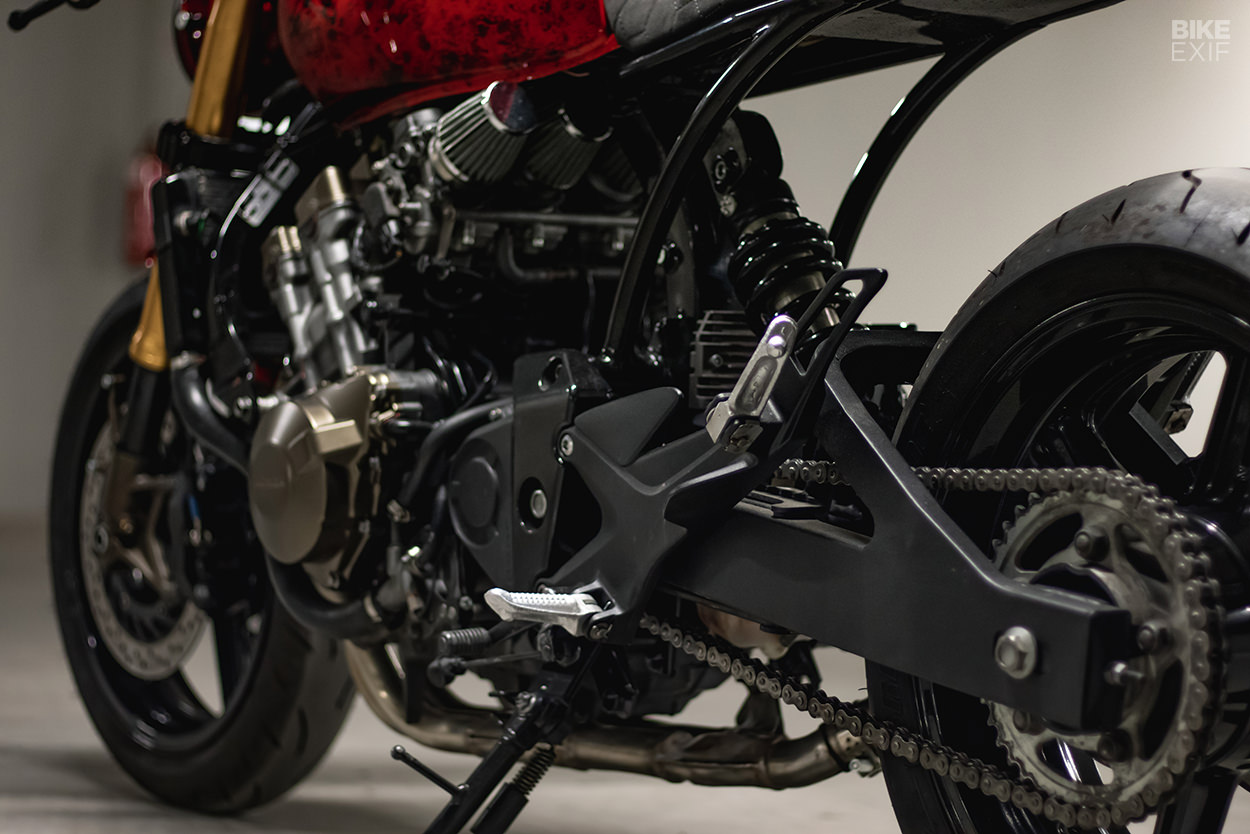 The water-cooled CBF600 engine is a smooth rather than high-revving unit, easily identifiable by the hose on the right-hand side. The power band is broad, with ample torque and around 77 hp; on this bike, it gets a little help from pod filters on the carbs, and a reverse cone muffler.

“We completely restored the carbs and re-jetted them too, in order to work well with the new exhaust,” says Chris.

To avoid surprises down the track, the CBF has been completely rewired with a new loom. There’s a compact lithium battery under the seat, and the ignition is operated via remote control—so there is no key needed.

“The final step was the paint,” says Chris. “Almost everything was either powder coated or anodized, but the fuel tank, fender and headlight housing were custom finished using a ‘foggy’ red paint.” It’s an unusual effect that bucks the modern trend for pared-back, flat finishes. 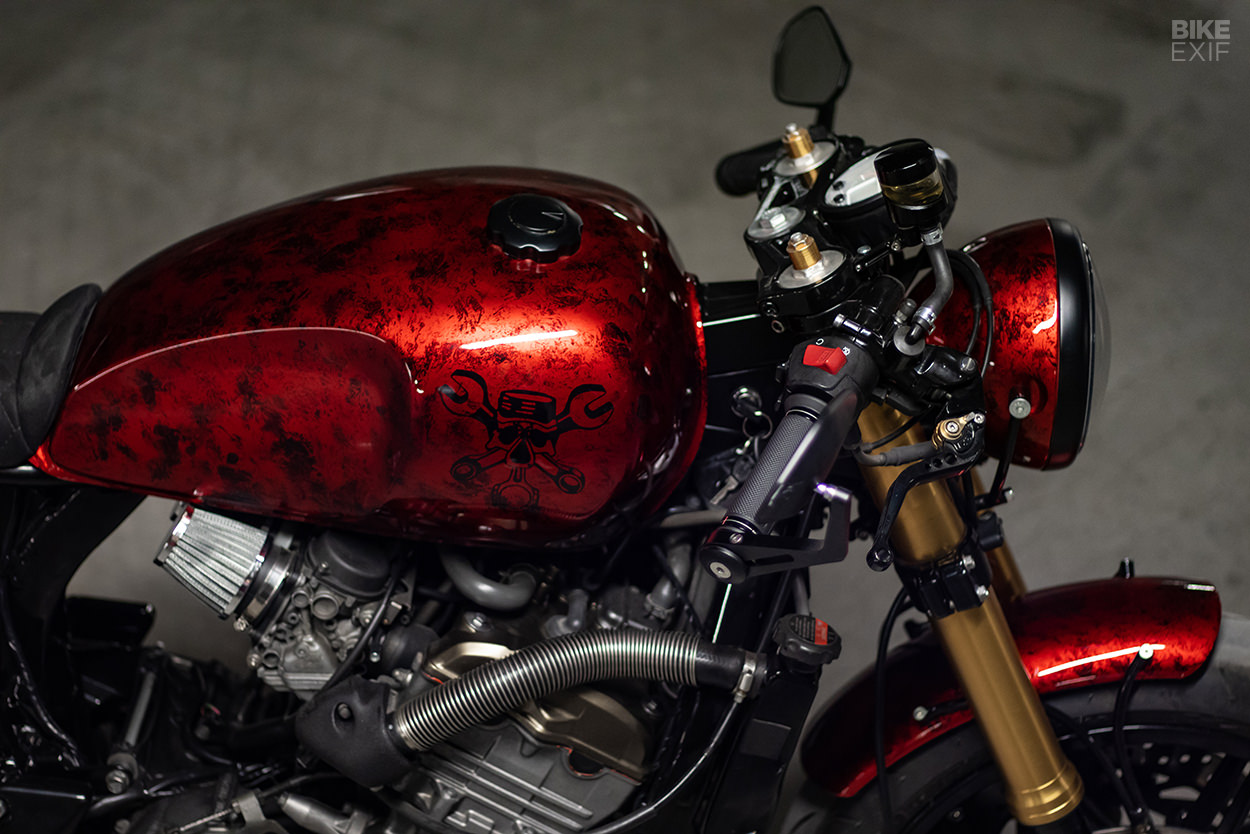 When we first saw this CB, we assumed it was a pro build: it’s got the quality finish, the stance and the right parts. For three guys working after hours, it’s a terrific achievement. Maybe it’s time to quit the day jobs? 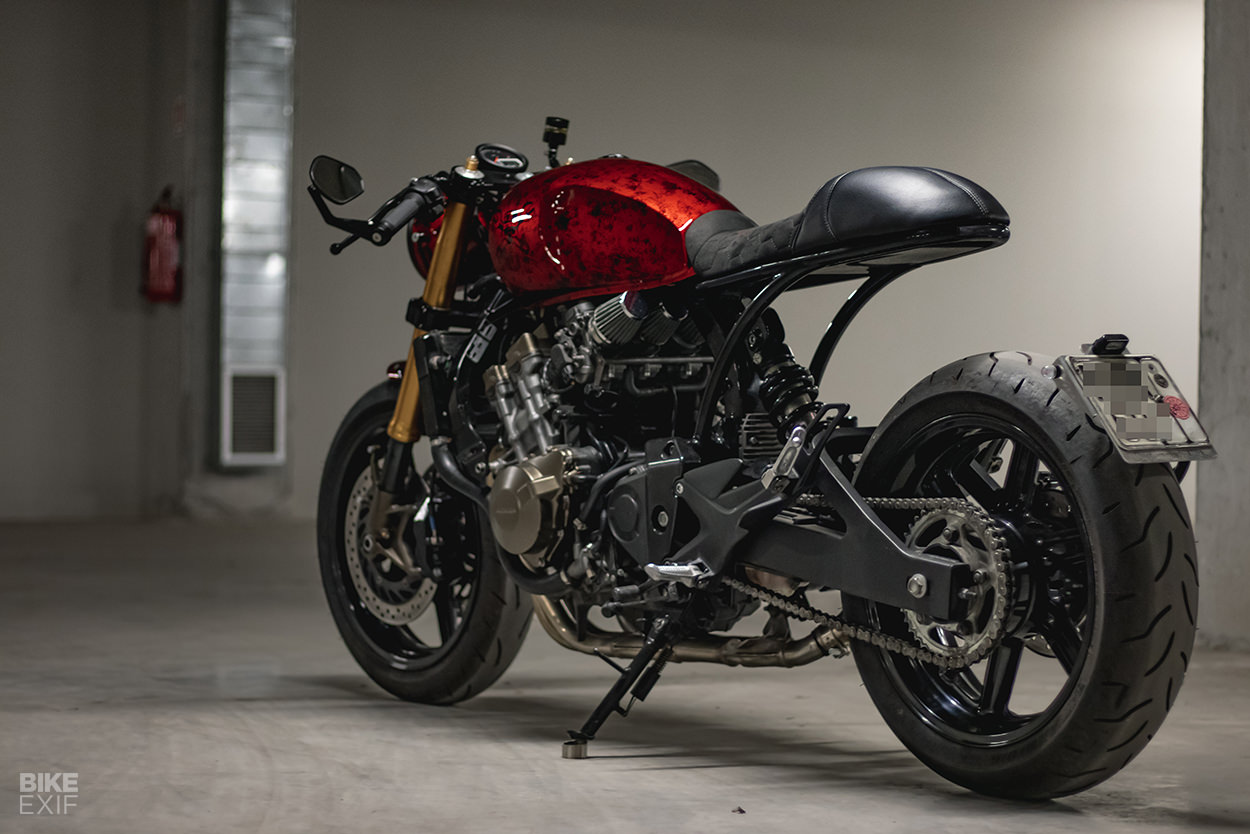