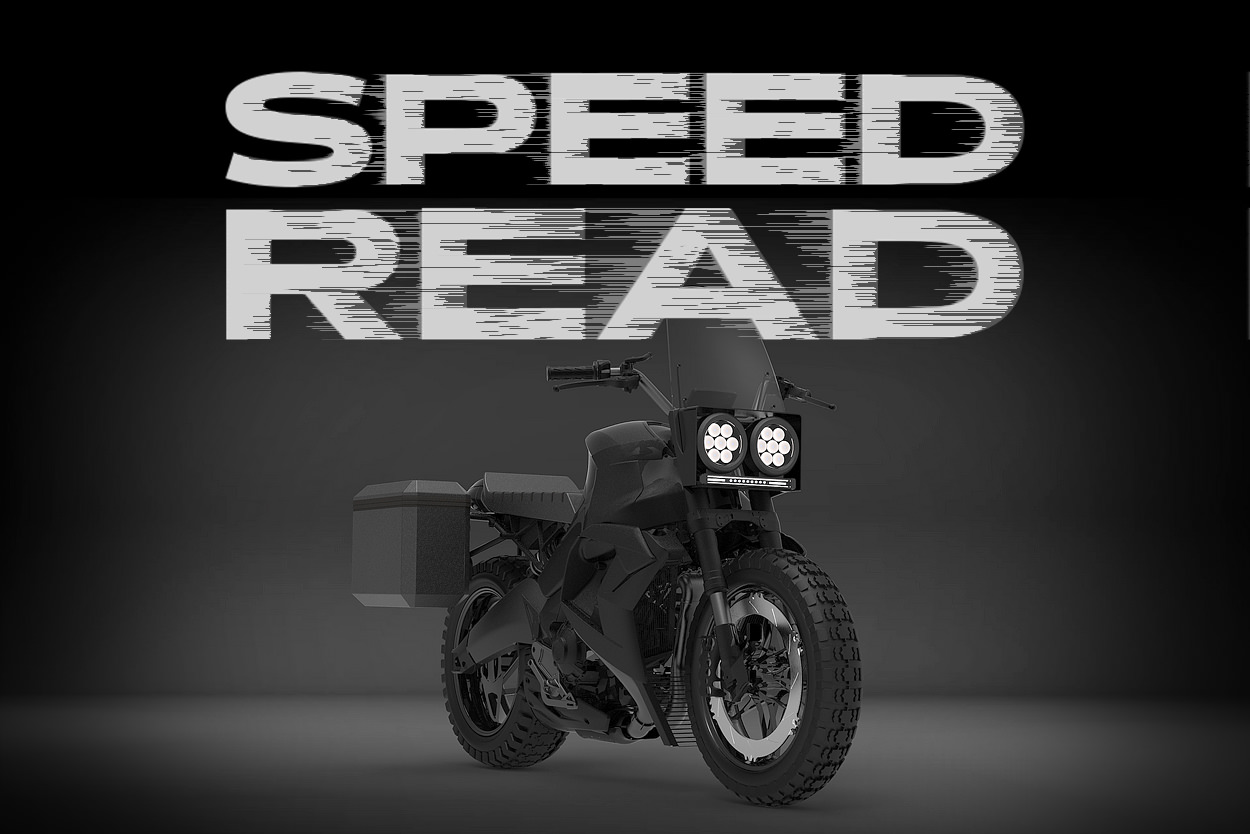 This week we’ve got a stripped-back Indian FTR 1200 from France, thoughts on the return of Buell, and a details of tweaked Honda Gold Wing from Italy. And we take a look at BAAK’s new custom workshop in Los Angeles. 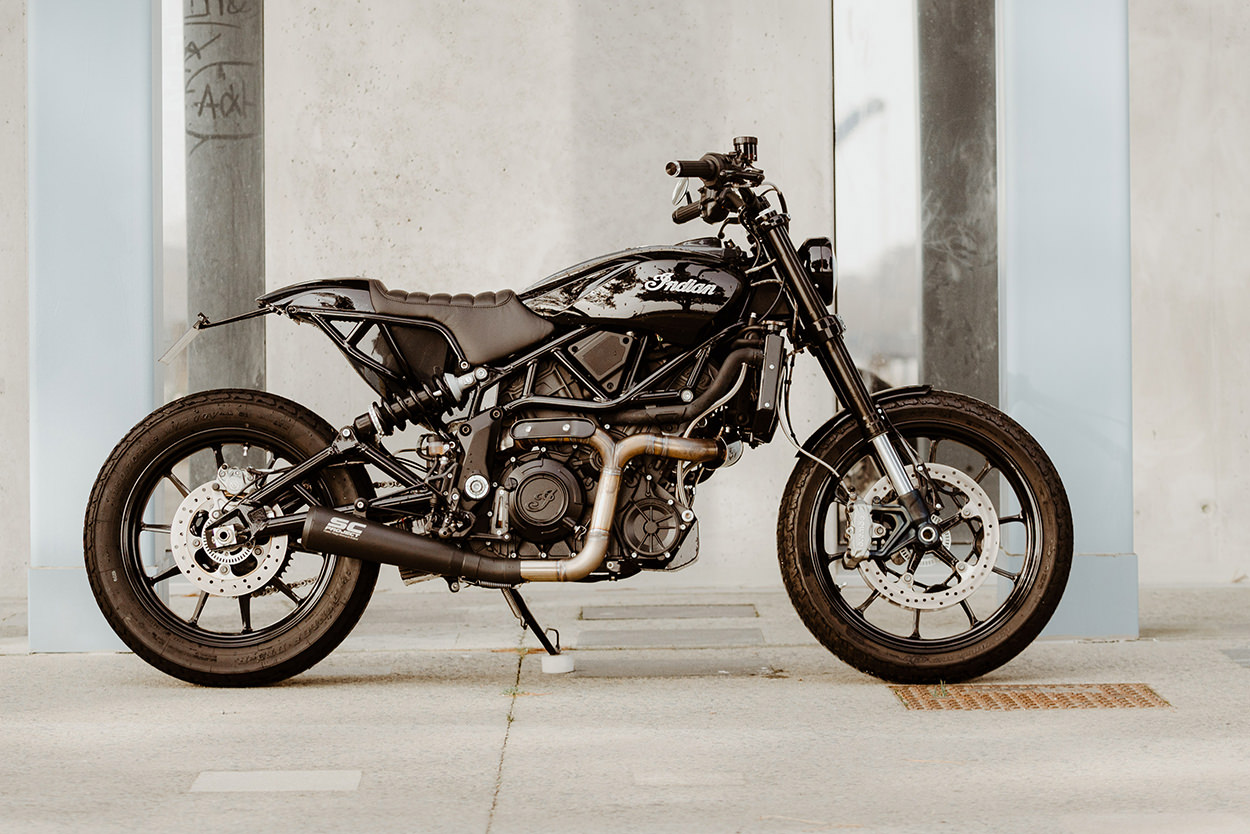 Indian FTR 1200 by Sur Les Chapeaux De Roues The SLCDR workshop is in the middle of nowhere—the tiny village of Tréméven in Brittany, France. But shop founder Manuel Jouan has a sense of style (and the skills) to rival any of his cosmopolitan competitors.

This FTR 1200 is his latest build, and it’s a little deceptive. “Substantial work has been done on this bike, even if it’s not apparent at first glance,” he says. 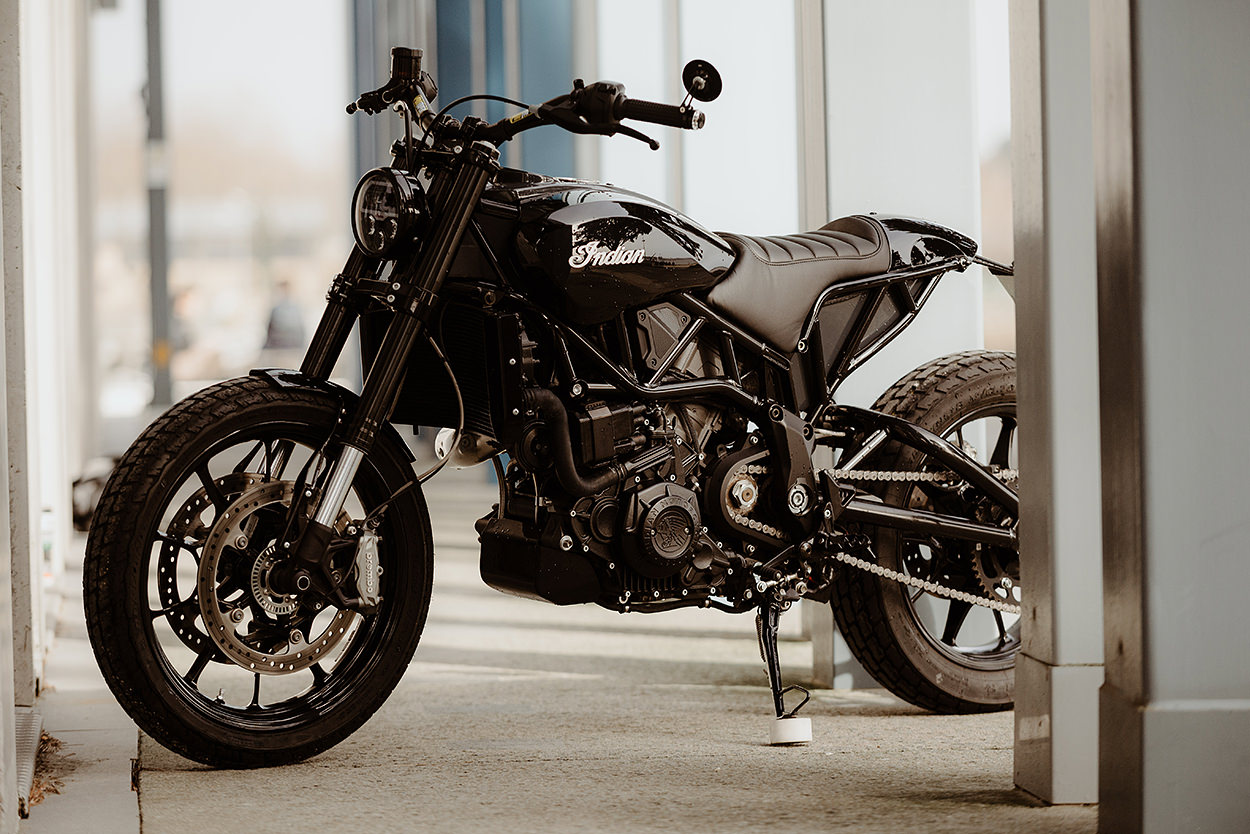 The rear of the frame has been completely rebuilt, and Manuel has built a new aluminum fuel tank to fit around it. The tank is under the saddle, and now runs almost the entire length of the frame.

Removing the stock air box has freed up space to increase the tank capacity, which is now five liters more than the 13 liters of the original. The new saddle is upholstered in leather, and Manuel has hand-formed a compact aluminum tail unit to cover the new frame tubing. 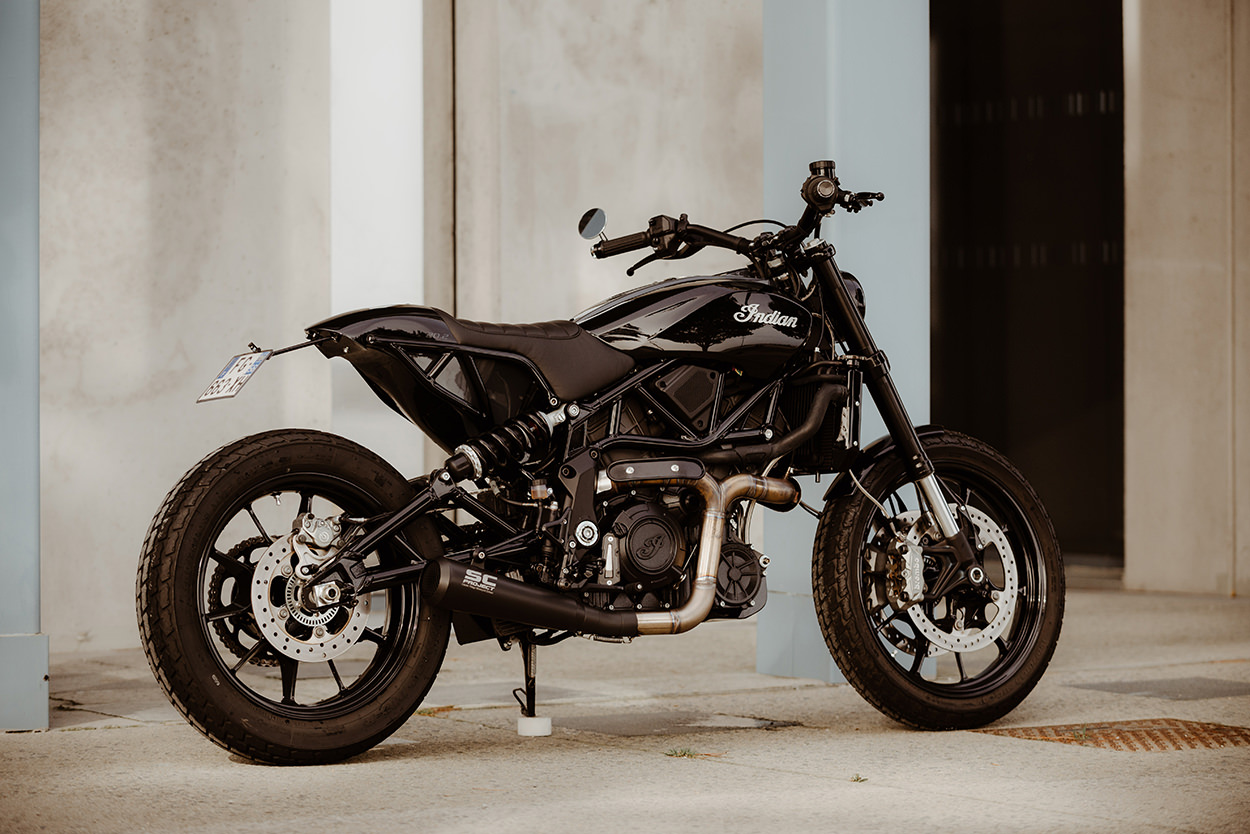 To showcase the 1,203cc V-twin, he’s also repositioned the oil cooler, and snuck a tiny lithium battery into a box under the swingarm. And the huge stock muffler is gone: there’s new pipework terminated with a more compact SC Project muffler.

The stock headlight surround is gone too, with the lens now housed within a conventional bucket, and the indicators have been swapped out for small Kellerman units. 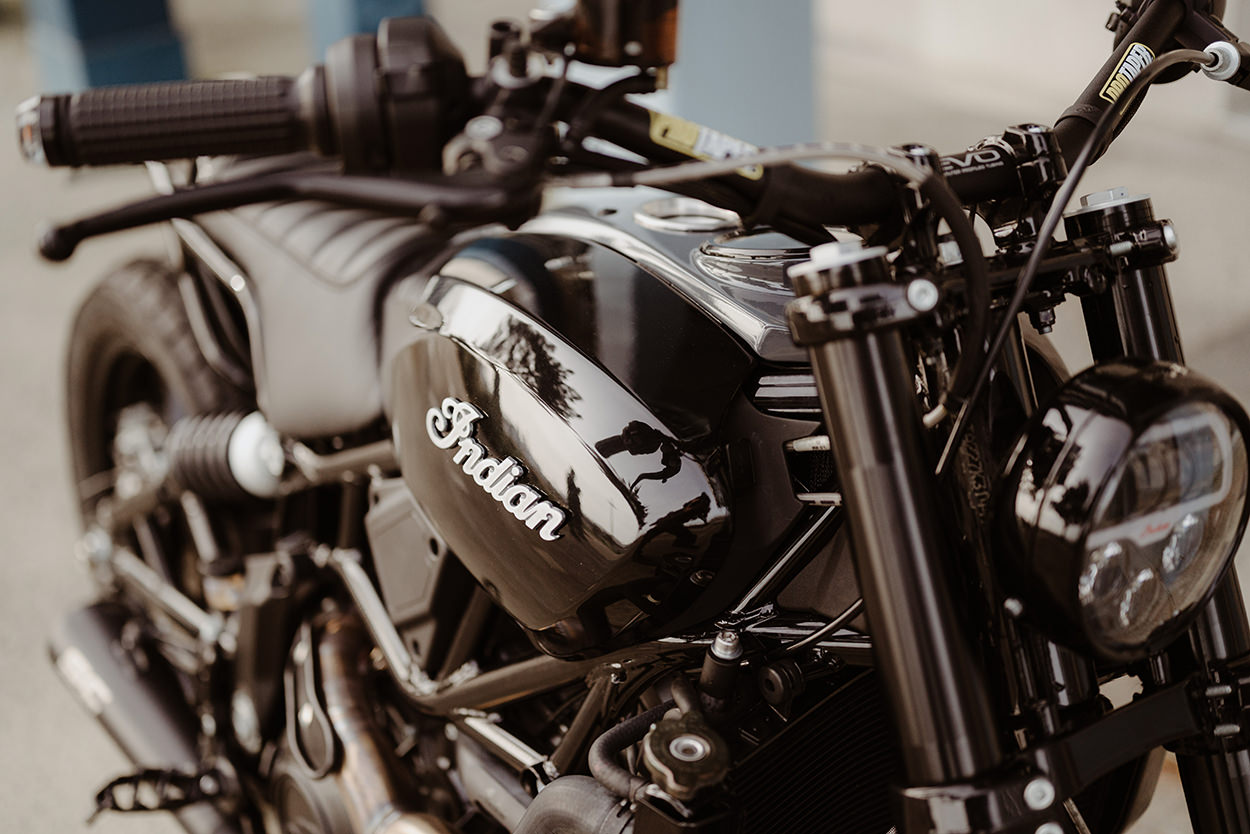 The fake aluminum ‘tank’ cover is new, and now holds the instruments as well as a pop-up cap. The paint is sober but elegant, with a mix of gray and metallic black.

“The ‘working directive’ on this bike was to purify as much as possible, while keeping the functionality,” says Manuel. “All the plastic parts and covers have therefore been removed or remanufactured, with better materials.” 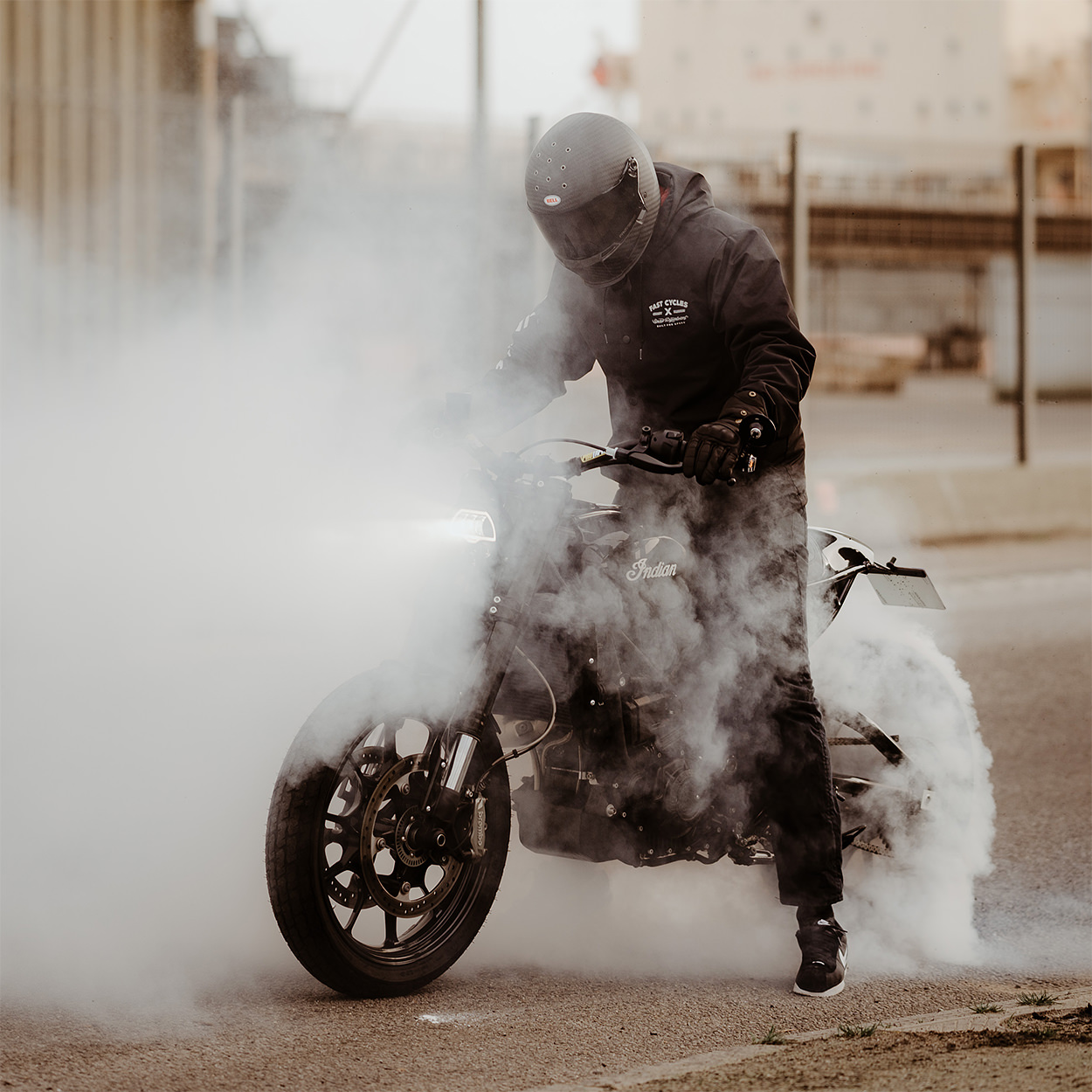 It’s a classy and restrained update for a bike that already looks good straight out the box. We reckon it’ll be perfect for blasting around the picturesque coastal roads of Brittany. [More | Images by Charles Séguy] 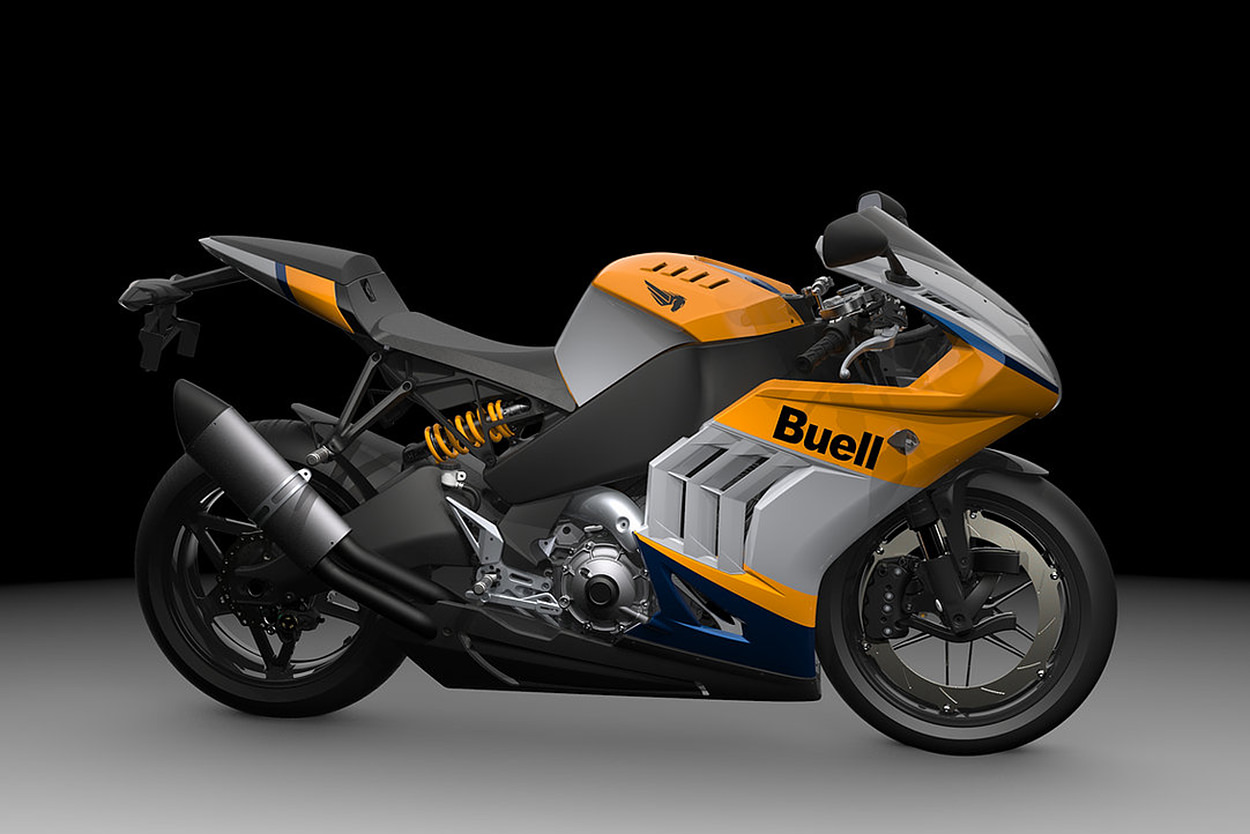 The Return of Buell (kind of) The saga of the Great American Sportbike continues. Buell is a name that just won’t go away, and liquidation specialist Bill Melvin has just resuscitated it again. 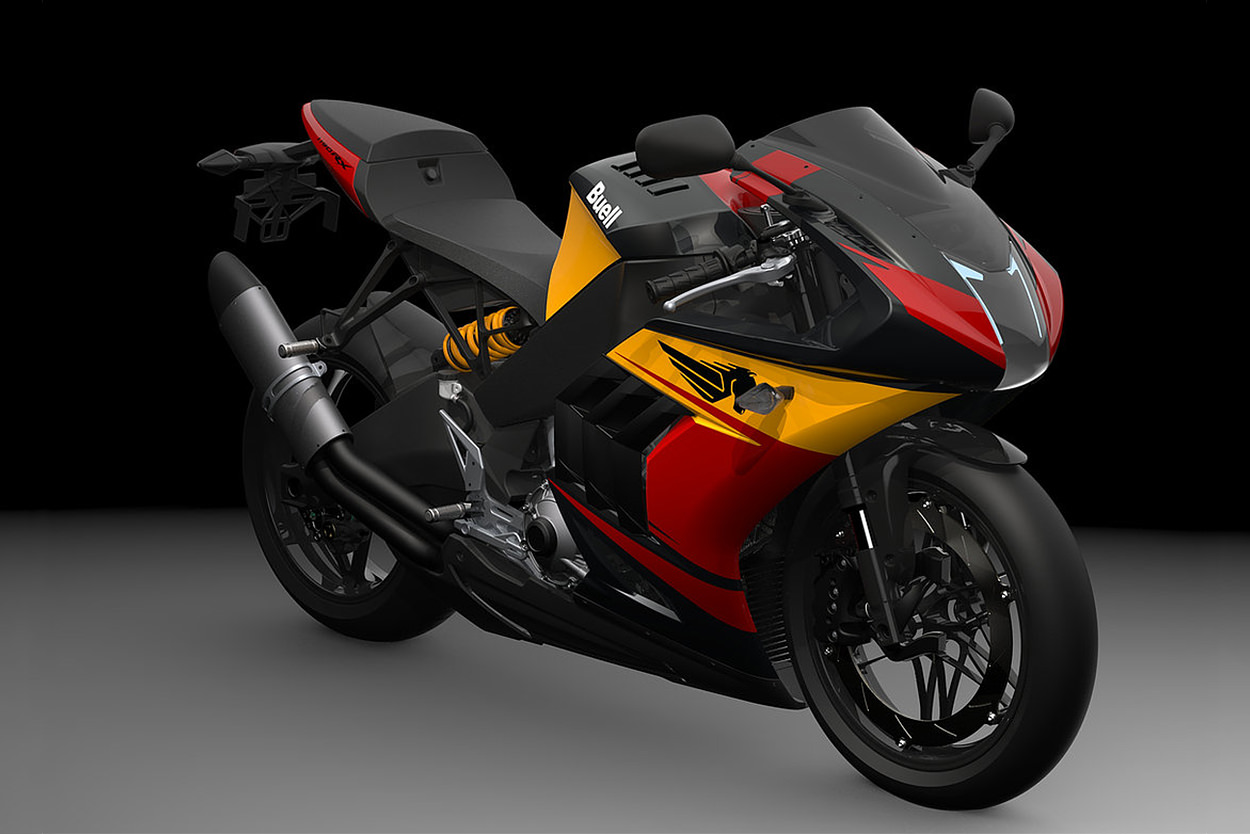 These days, Erik devotes his efforts to the electric moto company Fuell, but Melvin has fired up the Buell factory in Grand Rapids, and launched four ‘new’ models.

Two of them—the 1190RX Hammerhead sportbike above and the streetfighter-ish 1190SX, below—seem to be minor developments of previous Buell models. All use the familiar 1190cc Rotax V-twin, which pumps out an impressive 185 hp. 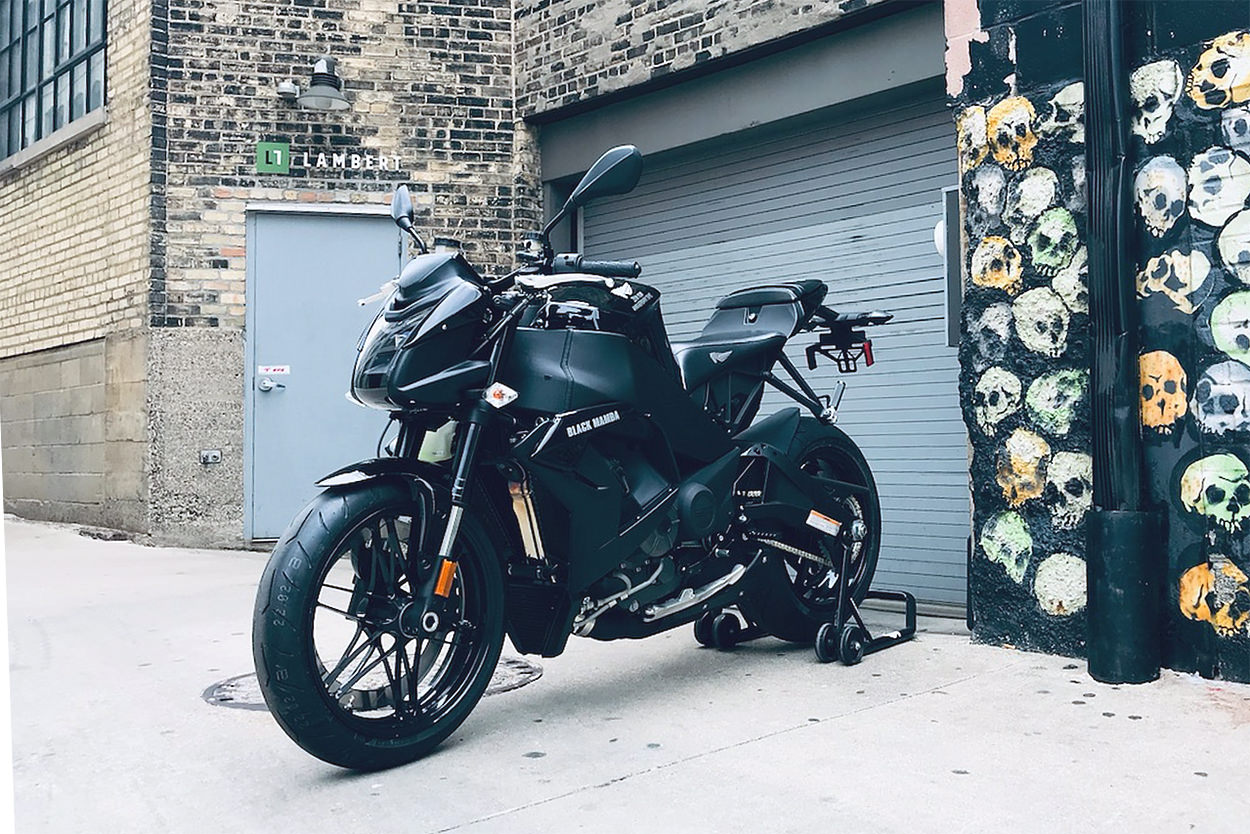 The fourth model announced is an adventure bike called ‘1190 Super Touring,’ [header image and below] and is due to go on sale in 2023. It’s more of an old school bike than most giant ADVs—no doubt because rider aids are expensive to develop. But it could give potential buyers of the H-D Pan America (launching tomorrow) pause for thought. 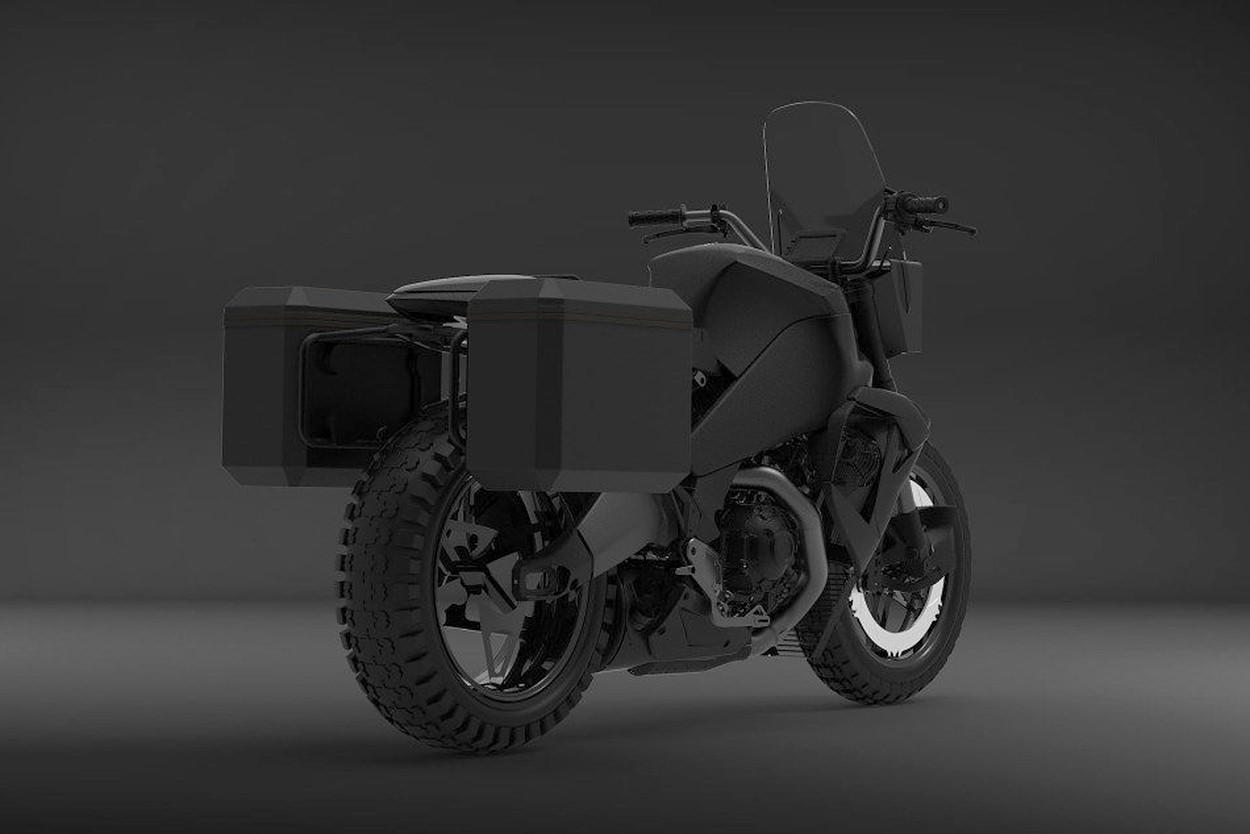 There’s no doubting CEO Bill Melvin’s enthusiasm for the brand. And his pockets are undoubtedly deep, despite the new Buell website being hosted on the bargain basement Wix platform—which costs a mere handful of bucks a month. But on the other hand, the ‘new’ range looks like a rehash. And as they say, “The definition of insanity is doing the same thing over and over again, but expecting different results.”

Melvin says that ten models will be on sale by 2024, using four different engine platforms. If the company is going to thrive, we suspect it’ll be these unknown models that will need to sustain it. [Buell Motorcycles] 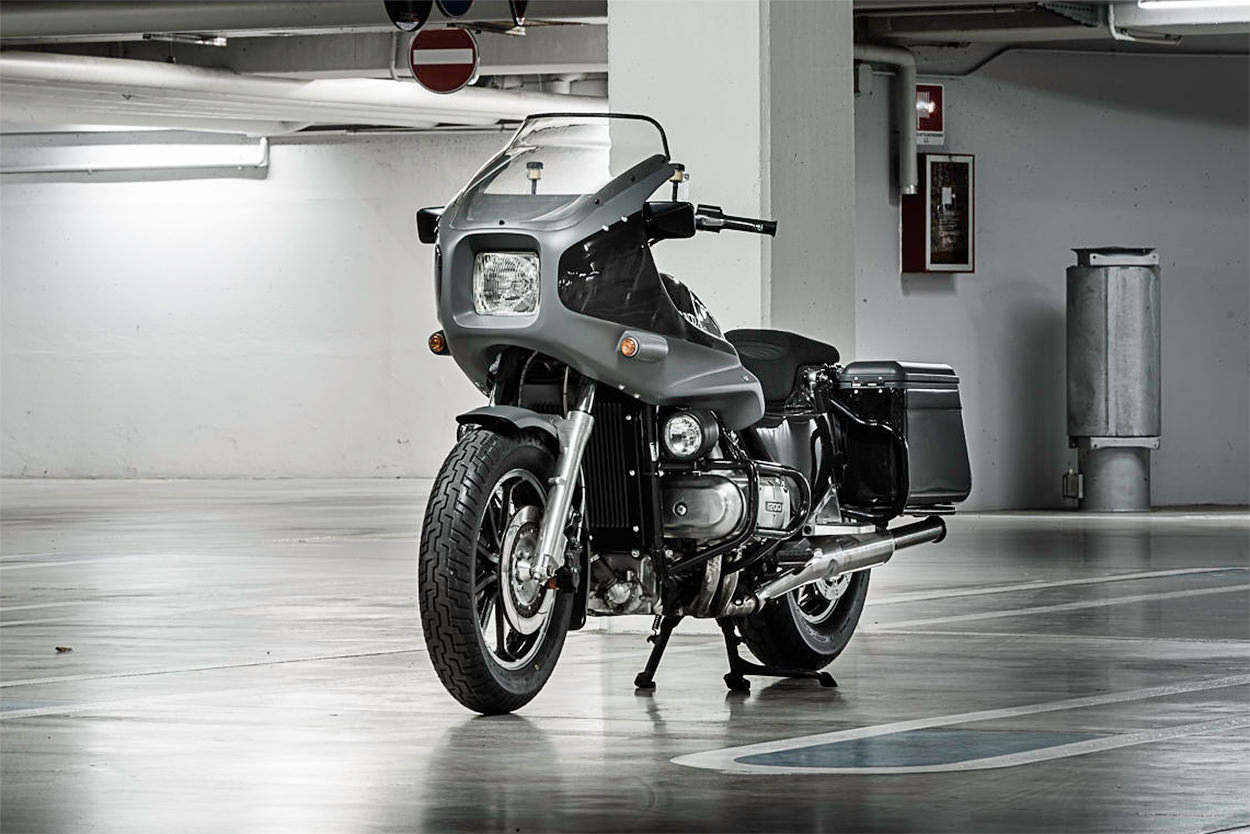 Honda GL 1200 Aspencade by North East Custom Many custom shops split their time between full-on builds and light refreshes, which are faster to turn around and keep the cash flow going. And Italy’s North East Custom is no exception.

In the mid 80s, the top of the range Gold Wing was the Aspencade. Despite weighing well over 700 pounds, it had a top speed of around 150 mph, air suspension, an on-board sound system … and plastic bodywork that looks somewhat questionable today. 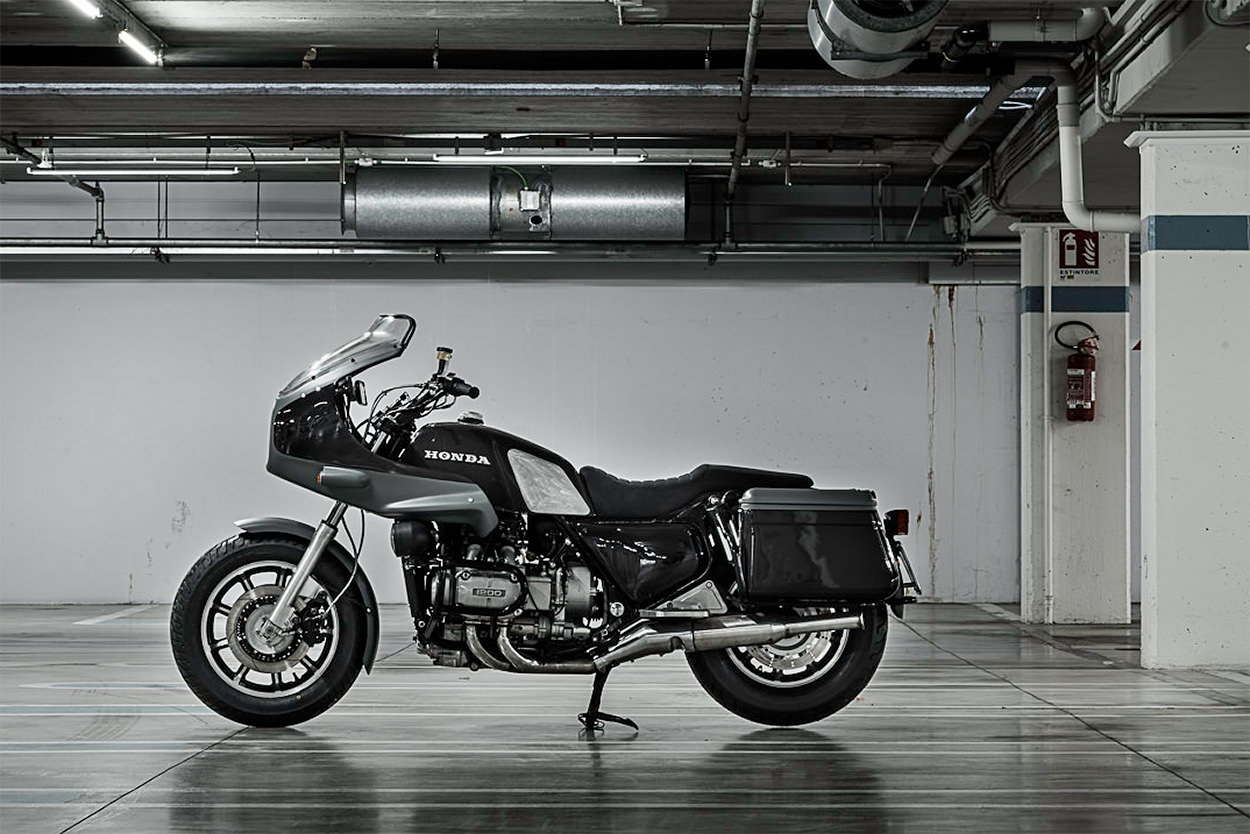 So NE Custom set out to ‘taper and streamline’ the iconic tourer. They’ve fitted a Honda CB900 Bol d’Or fairing, which maintains the retro vibe and protection, but looks much better.

The giant saddlebags have been swapped out for ex-Police Moto Guzzi units, there’s a new seat with a much tidier look, and the fuel cap has been moved to the top of the slightly reshaped tank. Ancillary headlights are mounted to crash bars, bringing the lighting up to 21st century wattage levels. 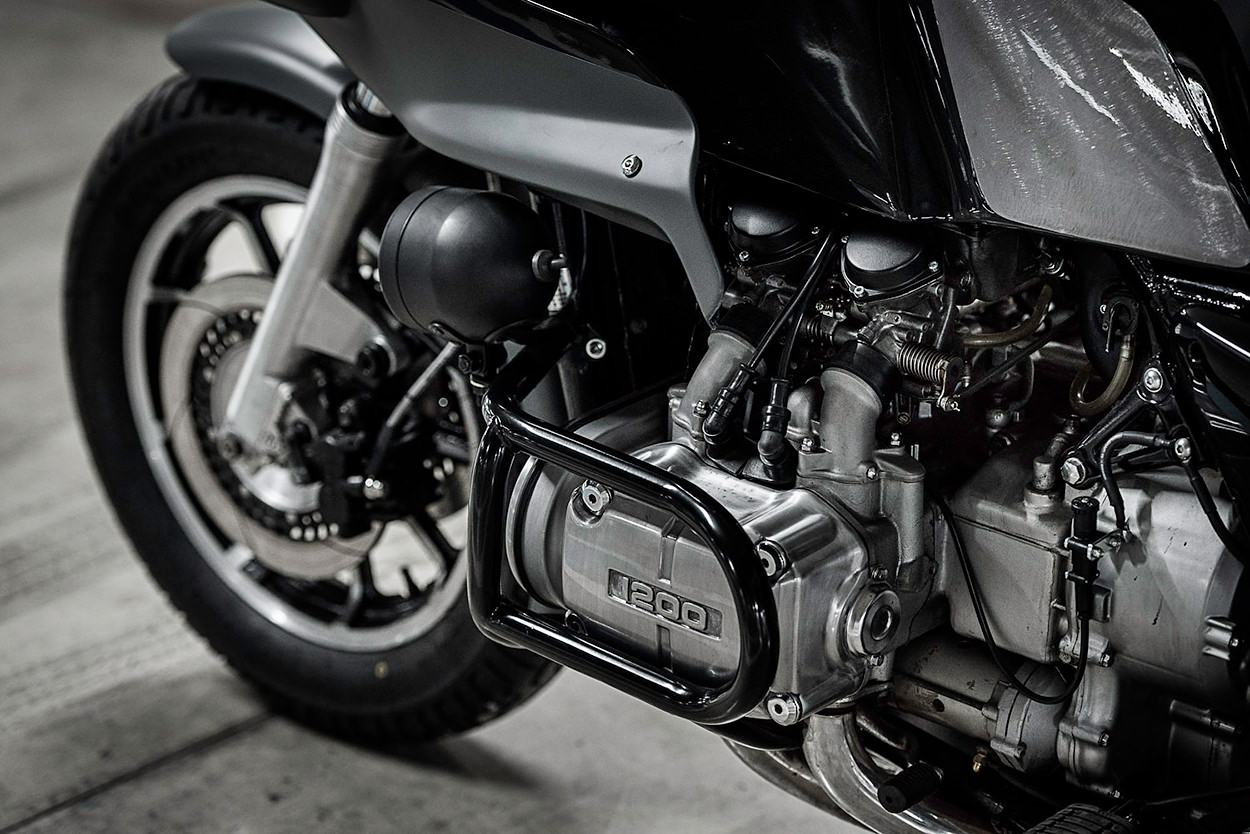 The Aspencade is still supremely practical, and still perfectly capable of a cross-continental dash without breaking sweat. Proof that sometimes less is more when it comes to customizing older bikes. [More | Images by Filippo Molena] 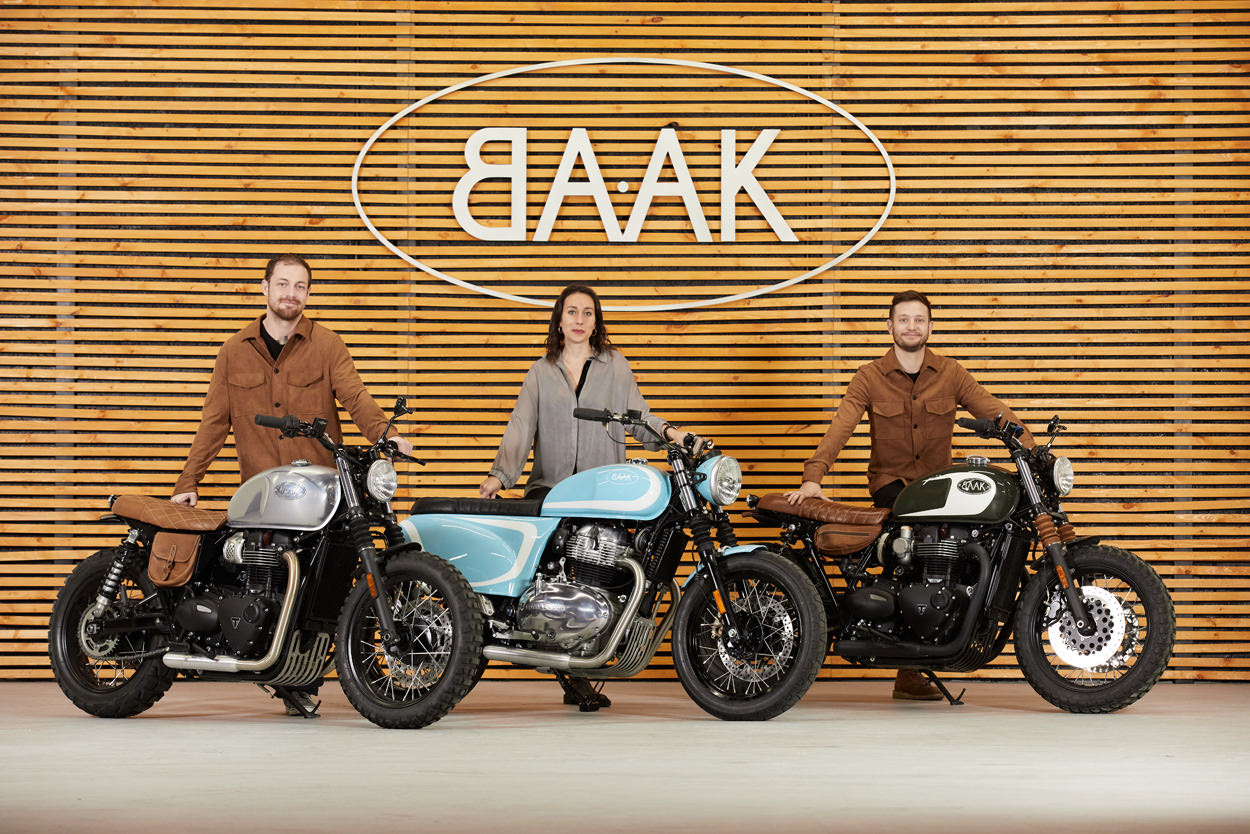 BAAK opens shop in Los Angeles Good news for Californian fans of Euro custom style: the leading French workshop BAAK has just opened an outpost in L.A., to supplement its headquarters in Lyon. 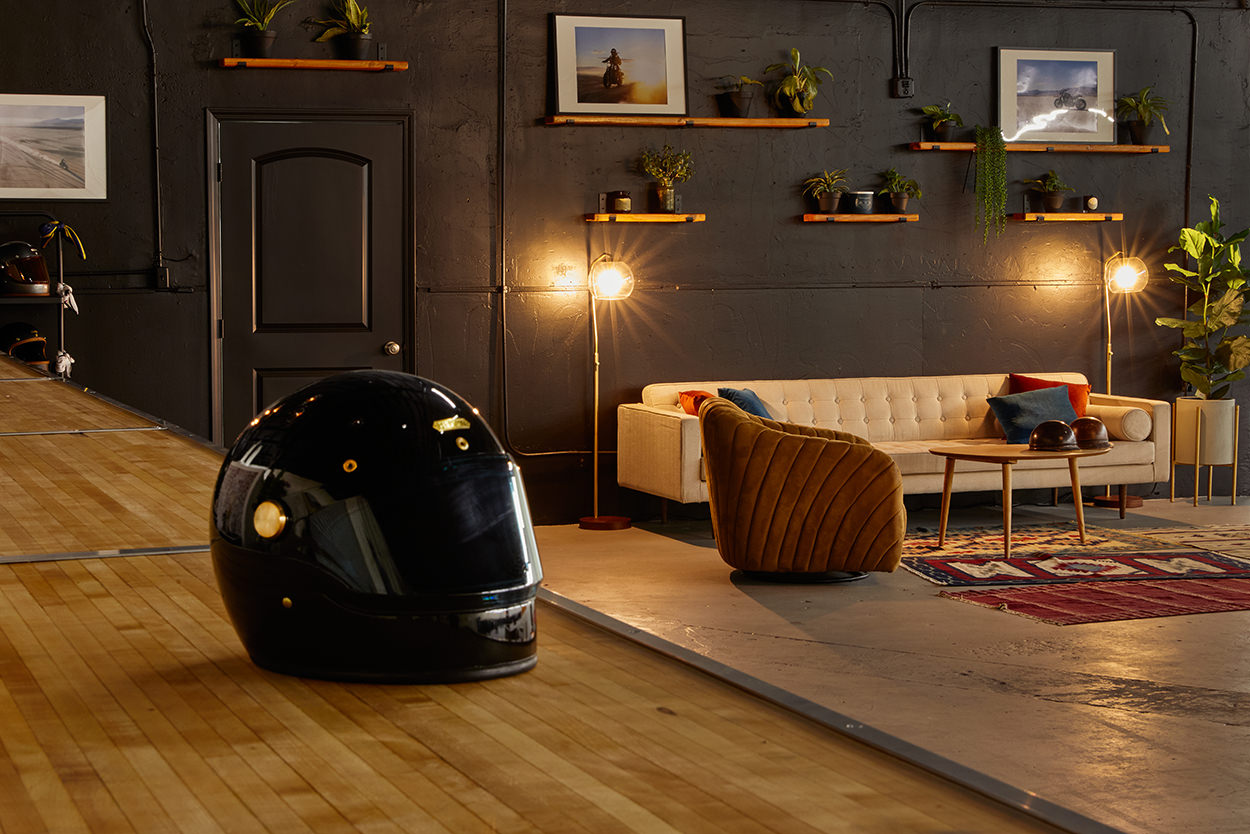 “When we were just operating out of Lyon, we were limited to only shipping custom parts to the US,” says new local boss Laura Favier. “Now we are able to design and handcraft bikes to be delivered to every state in America.”

“Anyone looking for a reliable shop to build a dream bike should look no further. We transform brand-new Triumph ‘Modern Classics, BMW R nineTs, the Moto Guzzi V7 and V9, and Royal Enfields.” 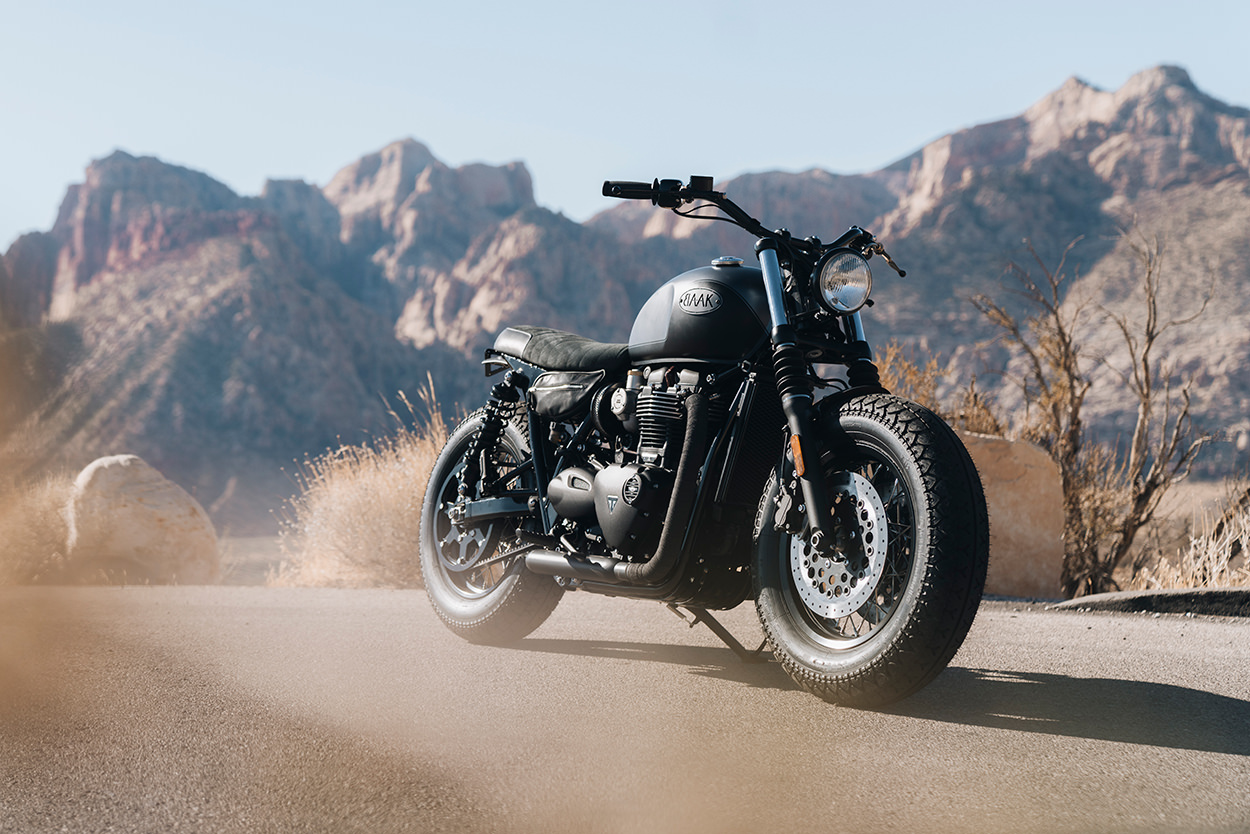 The custom Triumph Bobber shown here is already in the US, and a terrific example of BAAK’s slick style. If you’re within driving range of L.A., pay them a visit at 108 East Prospect Avenue, Burbank. Drop Laura a line beforehand via email. [BAAK USA] 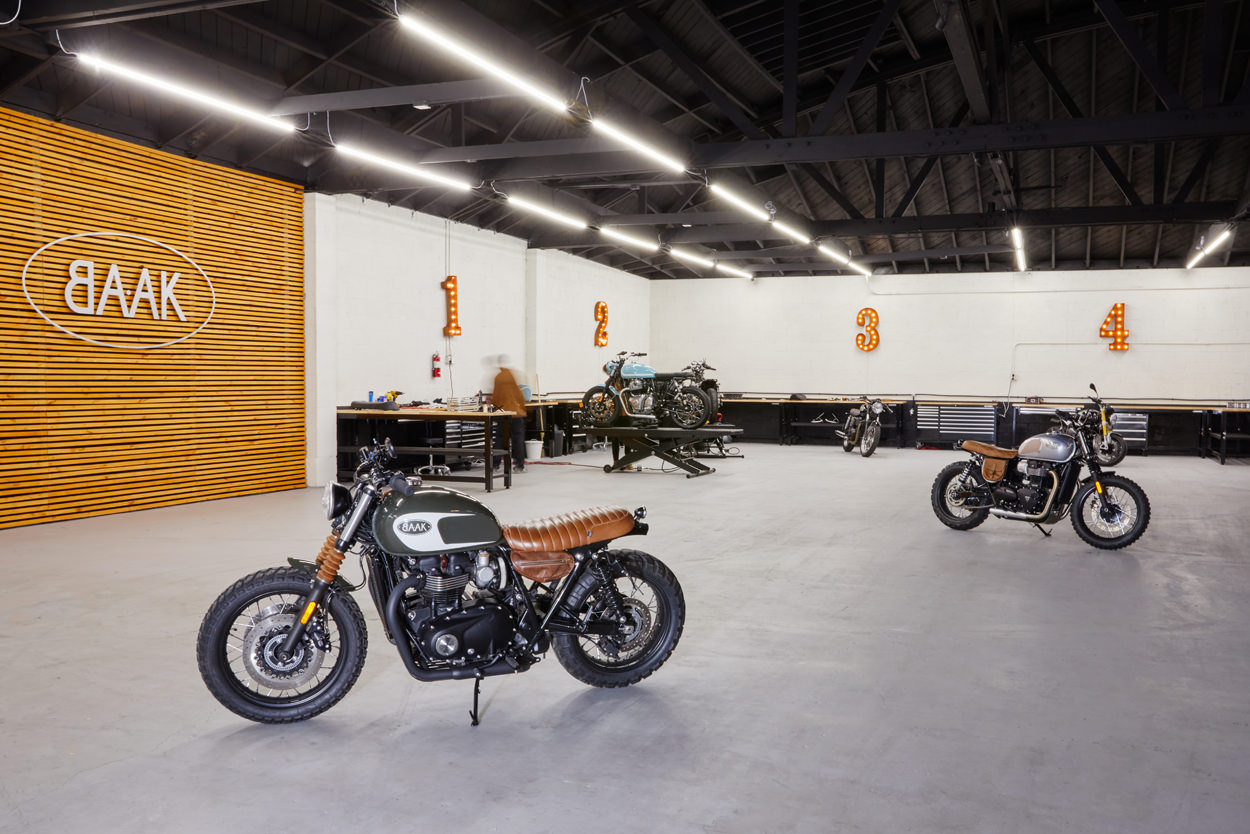