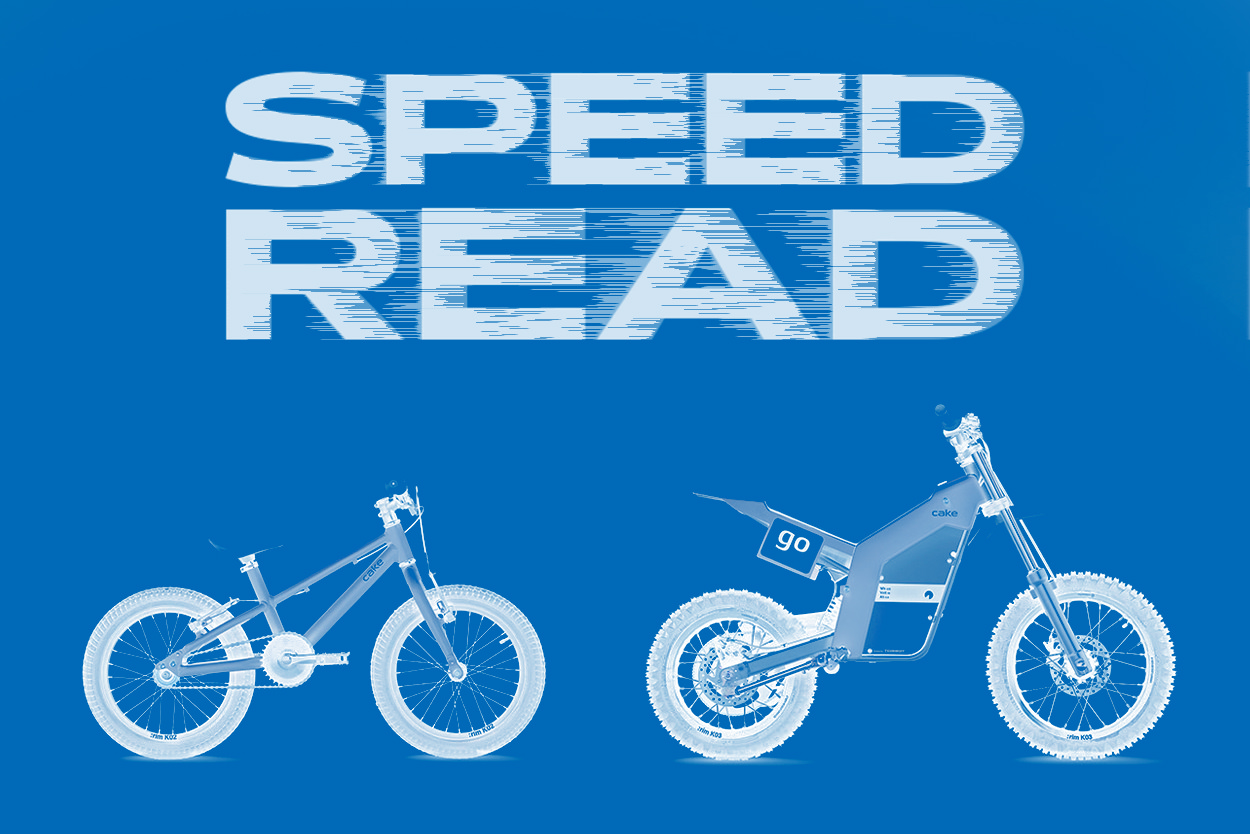 The Swedish brand CAKE releases its cheapest electric bike yet—for kids. Plus news of a CB750 owned by Steve McQueen up for sale, a custom CCM from Goblin Works Garage host Anthony Partridge, and an incredible Weslake-powered classic race bike from the Japanese shop Berrybads MC. 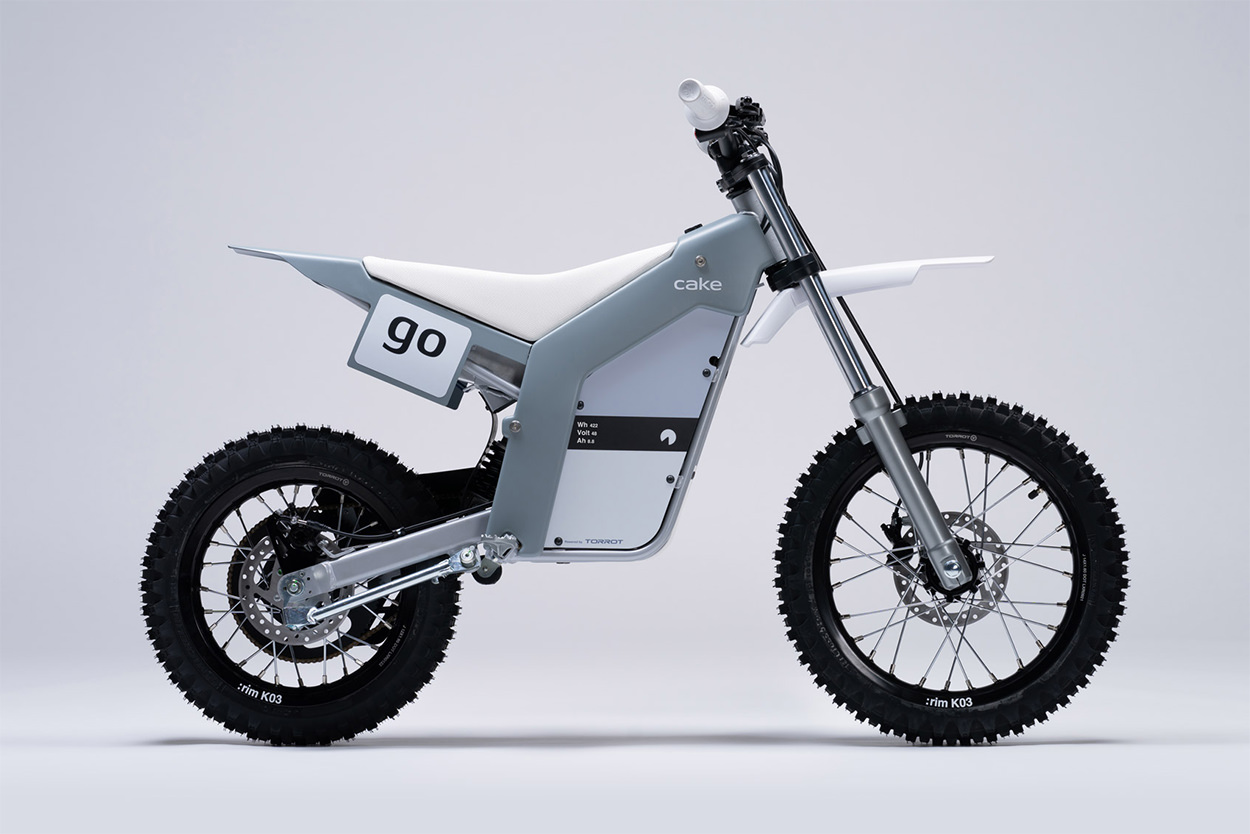 The CAKE Go is launched “Start them young,” the saying goes, and CAKE has obviously taken the advice to heart. It’s just released three bikes as part of a ‘Kids Evolution Program,’ ranging from a balance bike to a $3,500 off-road electric motorcycle. 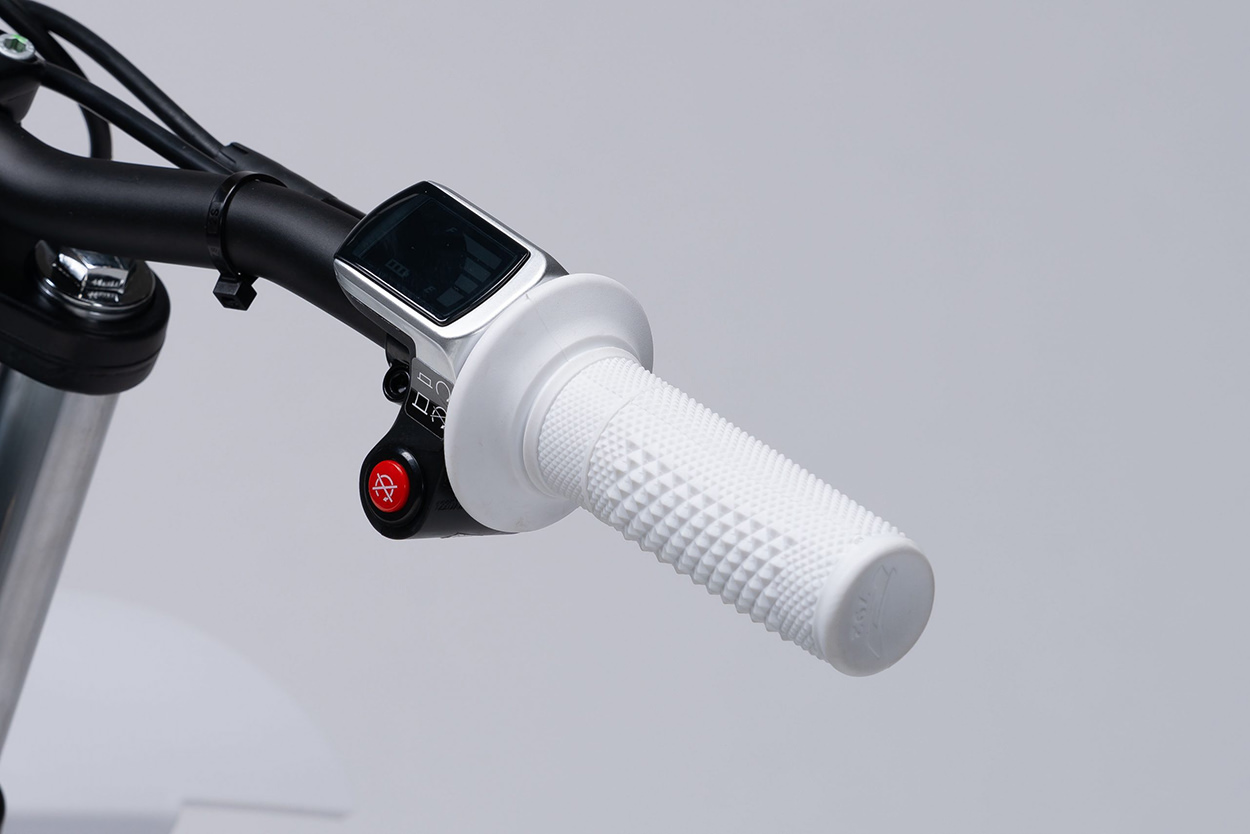 The range is cleverly called Ready, Steady, Go, and the latter bike is the one we’re interested in here. It’s designed for riders aged six and over, and has a top speed of 40 km/h (25 mph).

CAKE knows how to do things properly, so the Go has a quality tubular Chromoly steel frame and good-looking plastics. 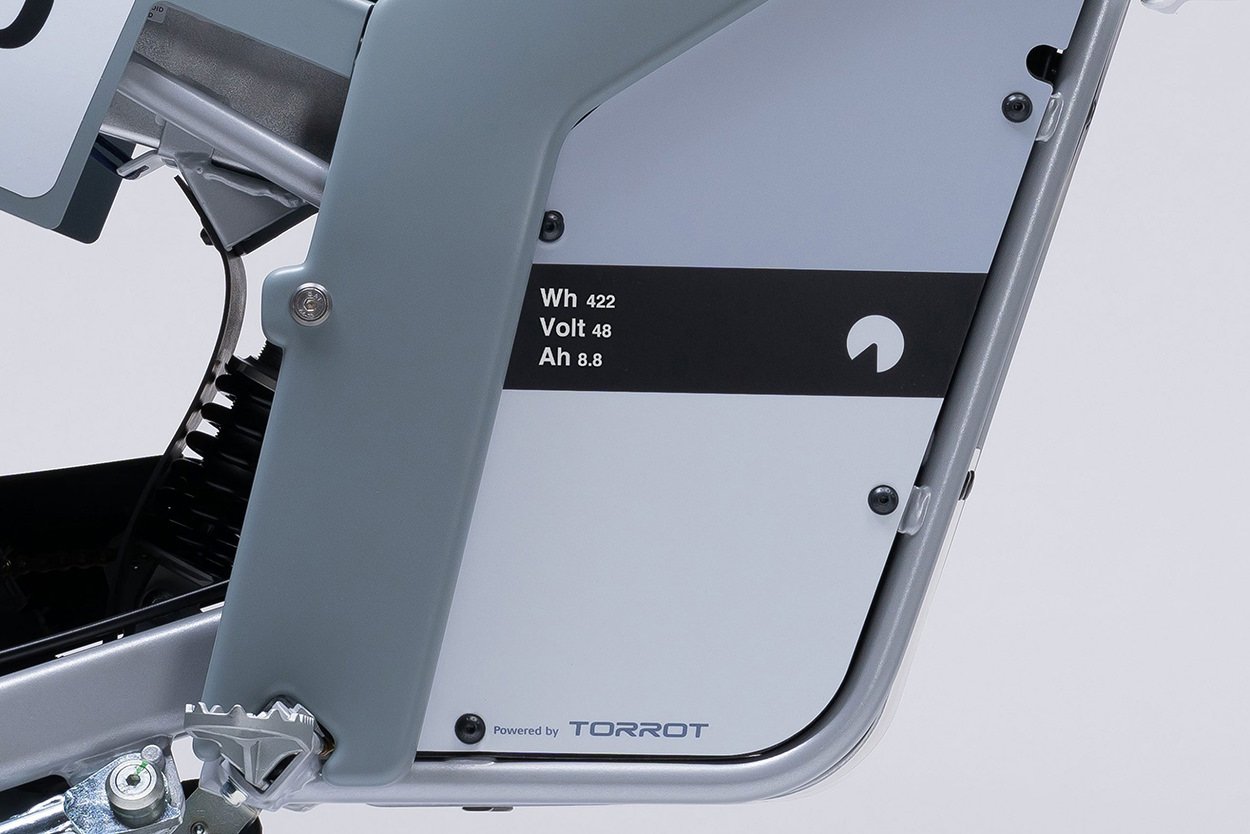 It weighs just 32 kilos (70 pounds) including the battery, and the power output can be adjusted from 600W to 1.5kW according to rider ability. Charging takes four hours from a standard household socket, which will give an hour or more of riding time.

Conventional forks with 95mm of travel at the front are matched to a pre-load adjustable gas shock. The wheels are aluminum F14/R12 units, and shod with decent Michelin Starcross knobbies. 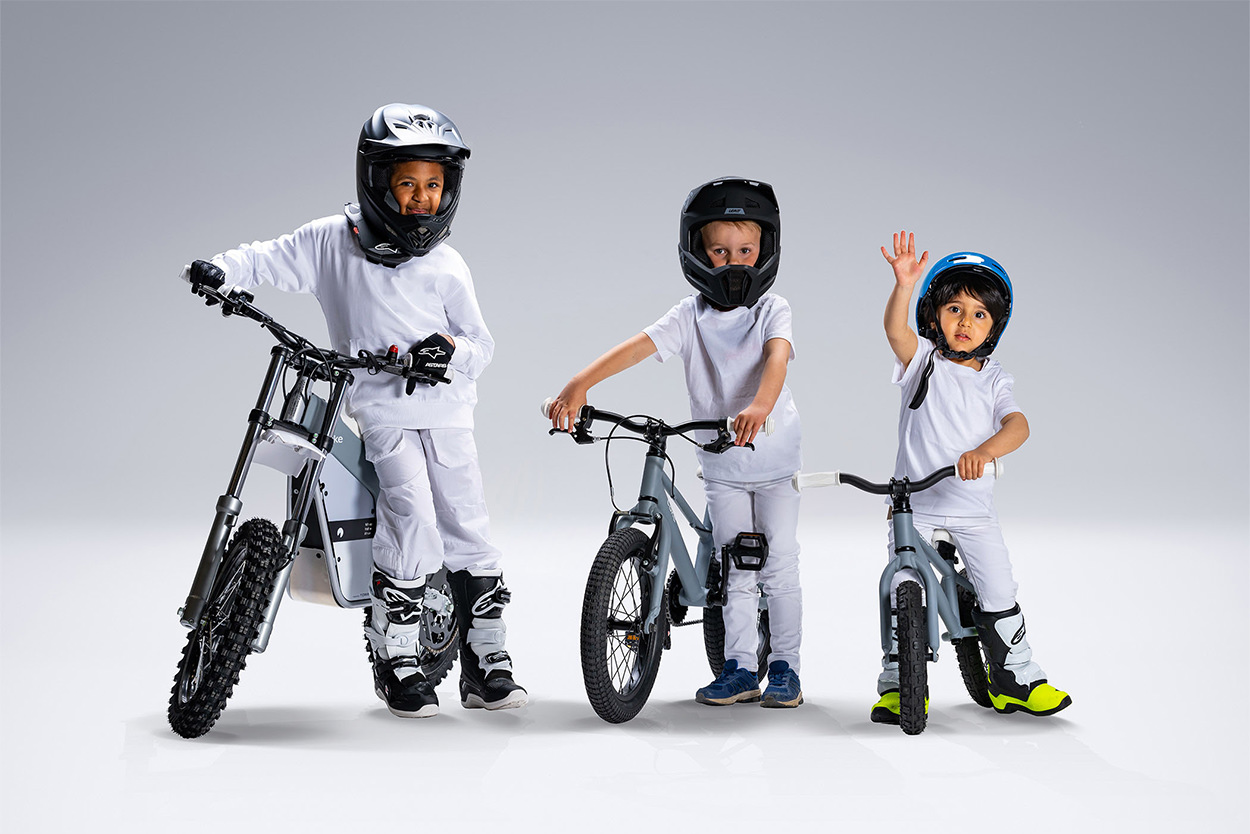 The CAKE Go can be delivered worldwide, and we suspect it’s going to be another hit for the revolutionary Swedish brand. 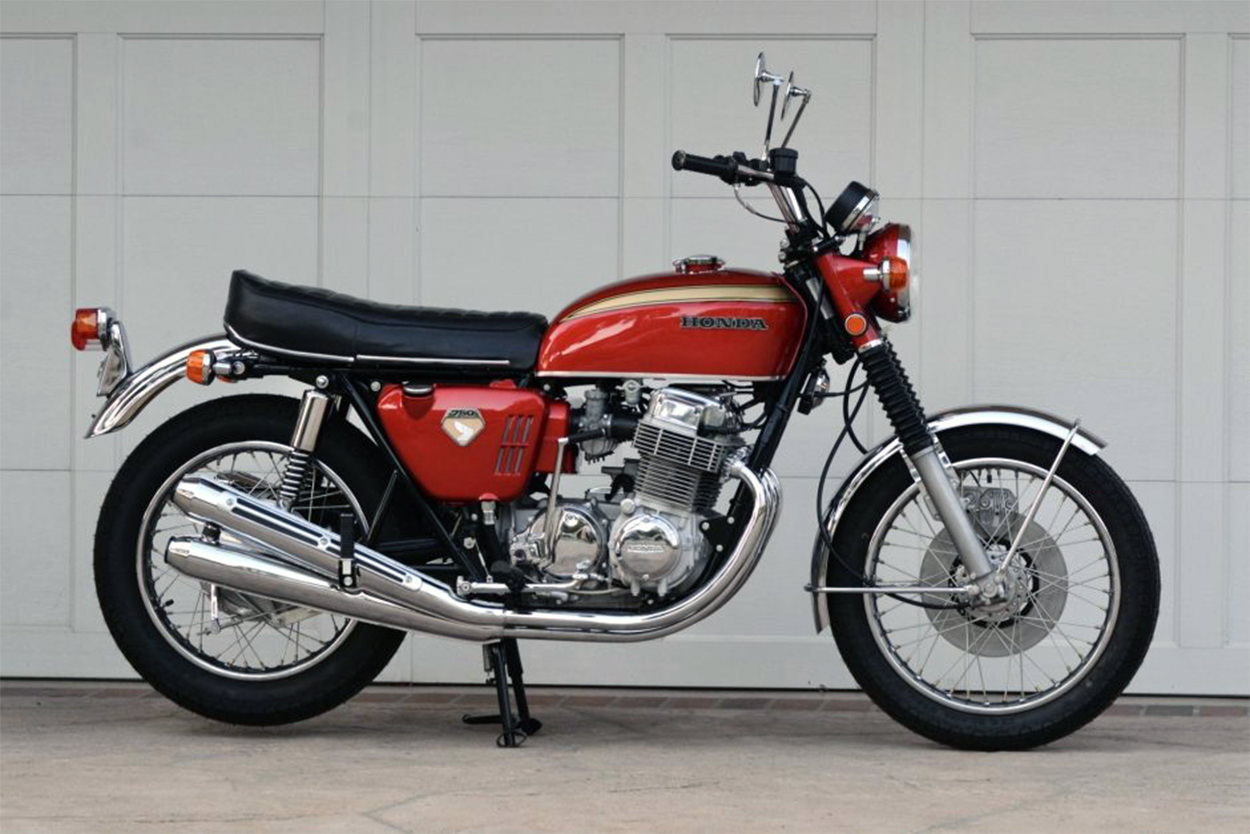 Ex–Steve McQueen 1969 Honda CB750 for sale We’ve seen some dubious claims in the past for bikes reputedly owned Steve McQueen, but this one looks bona fide. And the bike itself is incredibly desirable, irrespective of its history.

It’s a genuine ‘sandcast’ CB750 K0 that was bought by McQueen’s company in 1969, and it’s just been through a two-year restoration. The documentation all checks out, and there are just 22,000 miles on the clock.

The glorious inline-four, complete with early-production ‘sandcast’ cases, was refurbished by Charlie’s Place of Glendale, California. (This particular machine was the 1,064th CB750 built.) 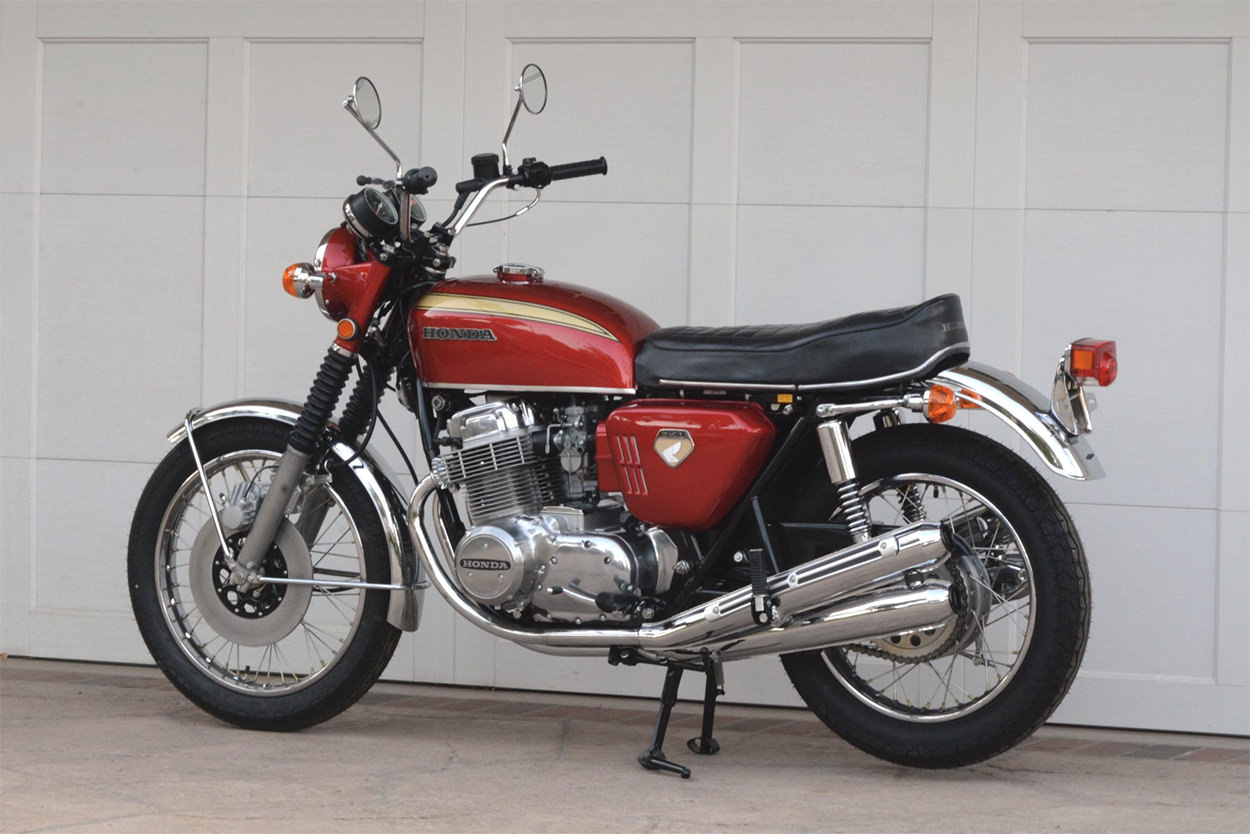 The rest of the machine has been rebuilt using original parts, with new chroming applied where necessary. Even the frame has been refurbished, and was painted black after media blasting.

As a piece of history, this is as good as it gets. It’s up for sale on Bring A Trailer right now, with the auction due to close just after we publish this piece. At the time of writing, bidding is at $65,000—and will probably go much higher. 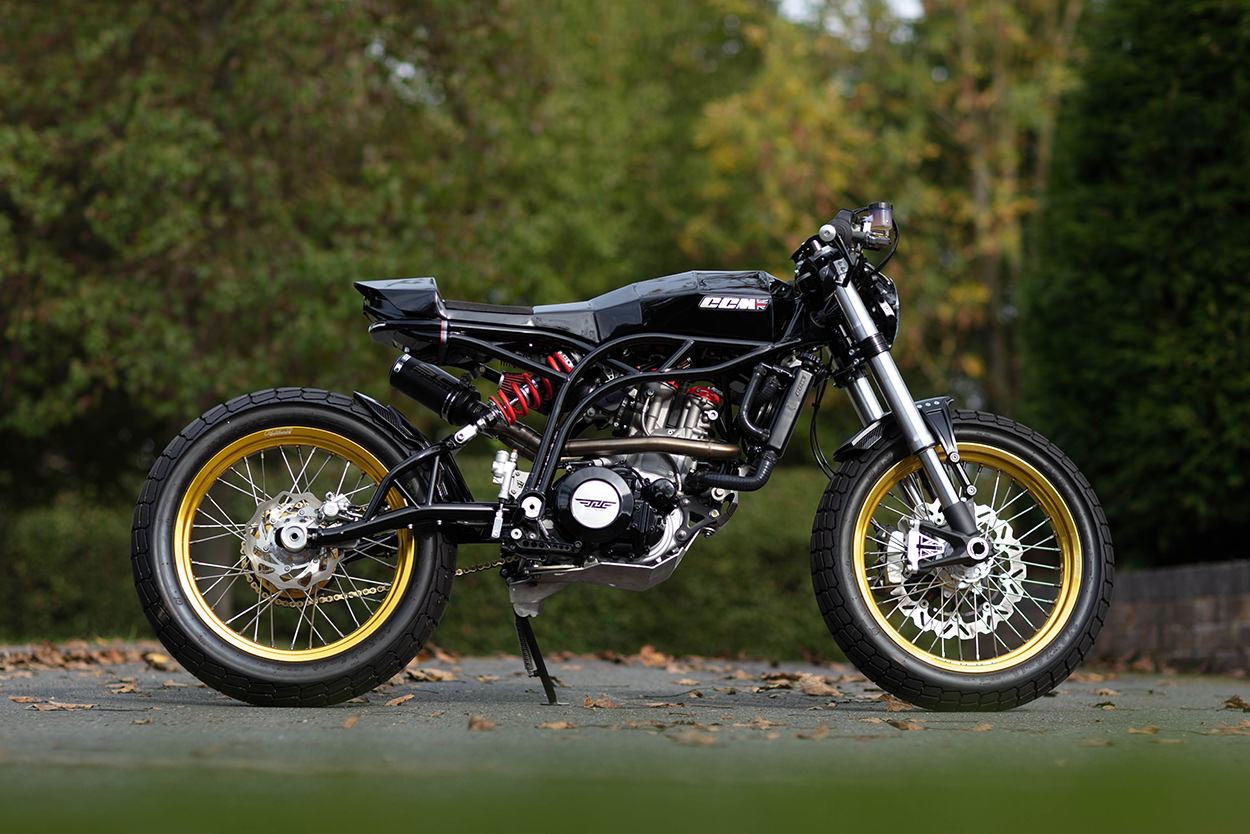 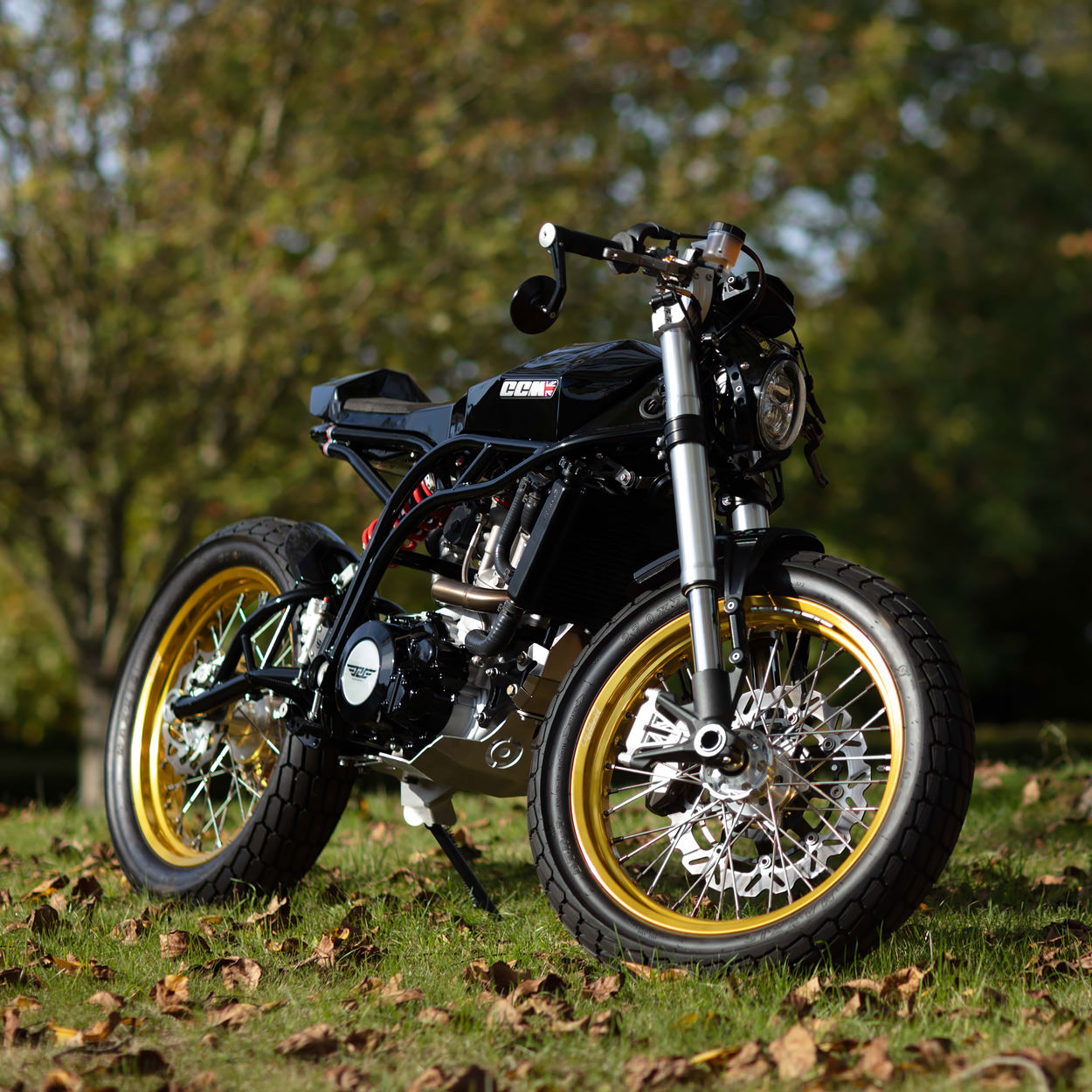 “This one was a quick fire build, to help CCM launch an in-house custom program,” he tells us. “The brief was to build something clean and simple, yet impactful, to showcase what can be done with CCM’s 600cc single platform. So all the mods are bolt on, and can be done by anyone with a bag of spanners and a wee bit of knowhow!”

We reckon Ant is downplaying his talents a bit here, because the key mod is aluminum monocoque bodywork. It’s produced from one piece of water jetted sheet metal, folded and welded like origami. 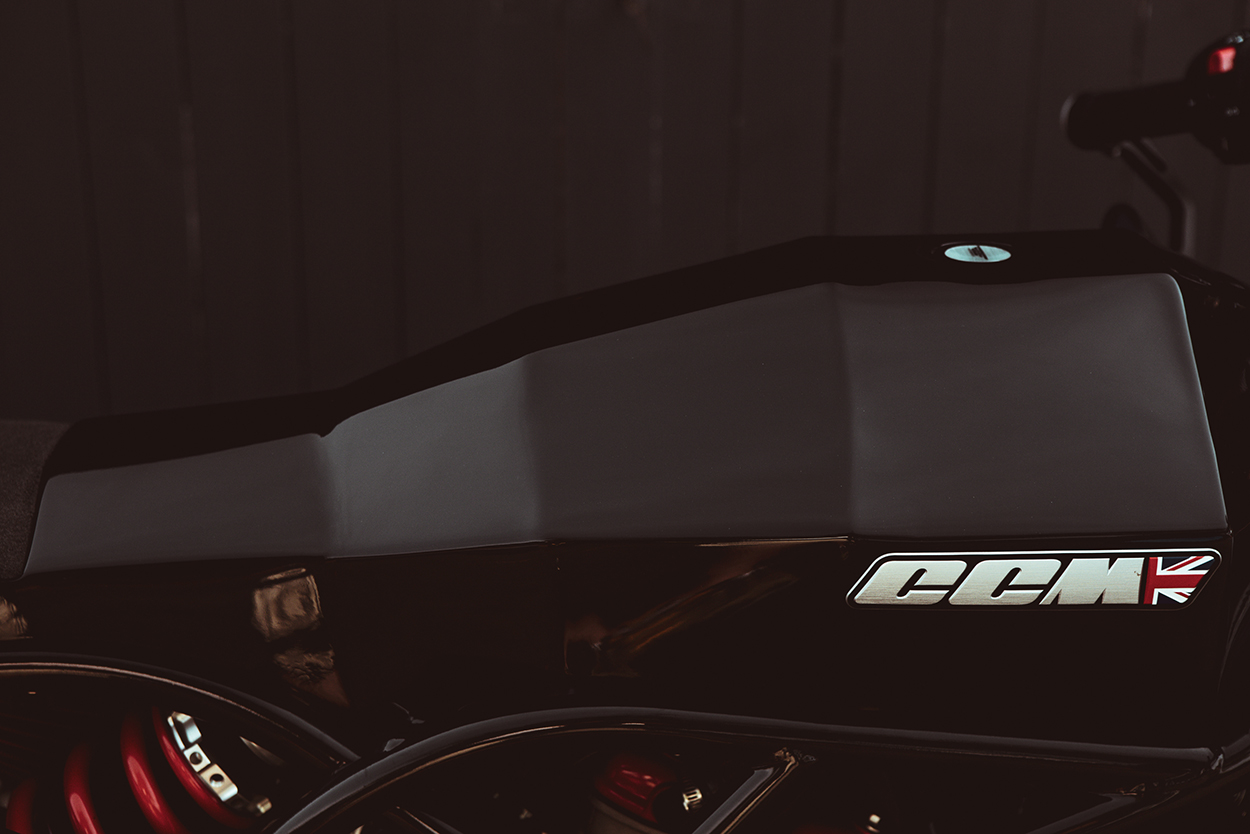 The engine gets a 2-into-1 stainless steel exhaust, with gases exiting just under the race foam seat via an SC Project muffler. All the billet aluminum parts have been anodised black, and the frame has been repainted (from matte to gloss) to match the bodywork.

Credit goes to Paul Drake for help with the design rendering and CAD, and Ollie Mullard of Olliminium Auto Fabrication for metallurgical assistance. 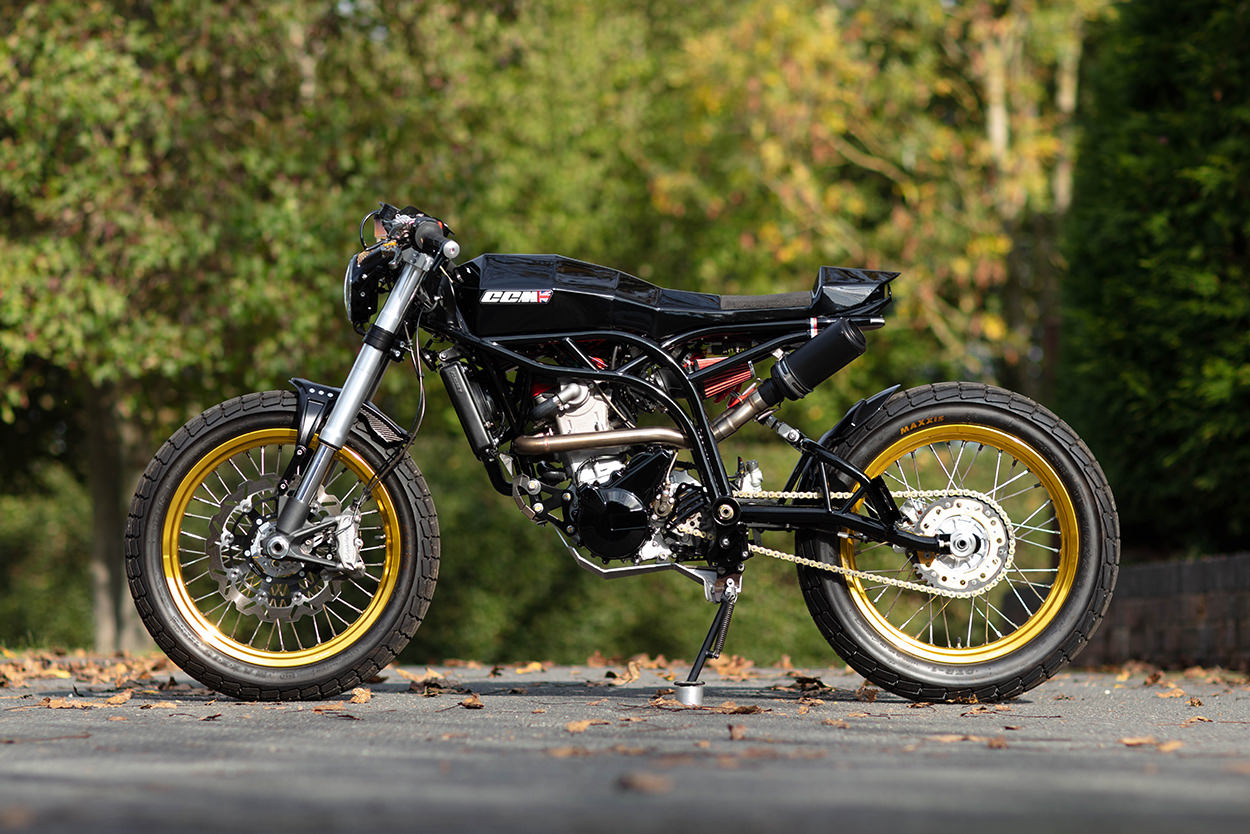 “I loved the proportions of the CCM from the get-go, so ‘less was more’ with this build,” says Ant.

“The bike is mega fun to ride—it weighs just over 110kg. The Husqvarna engine chucks out 55 hp and 43 lb-ft of torque, so it’s a proper hooligan bike in the city!” 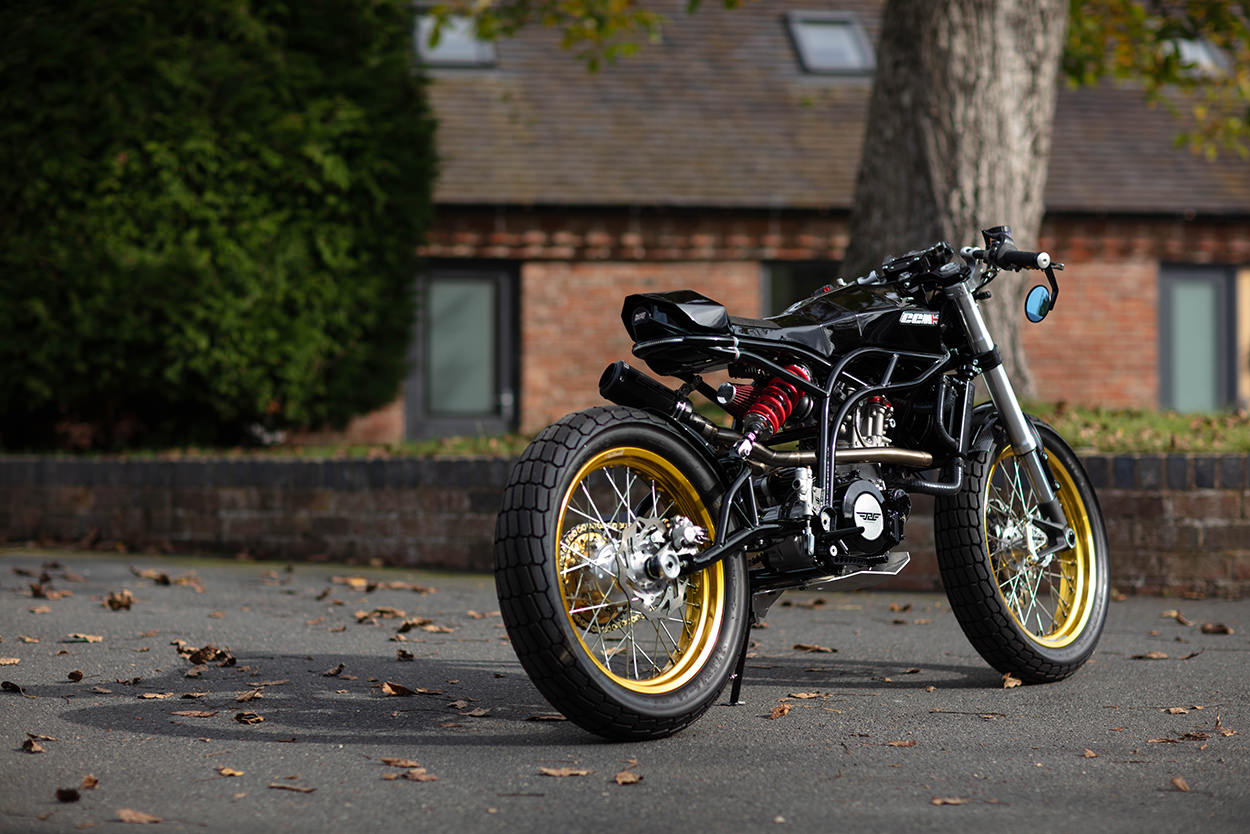 It’s so much fun, Ant is going to have to sell it.

“I know that if I put it on the road, I will either lose my license or end up in prison!” [Partridge Design] 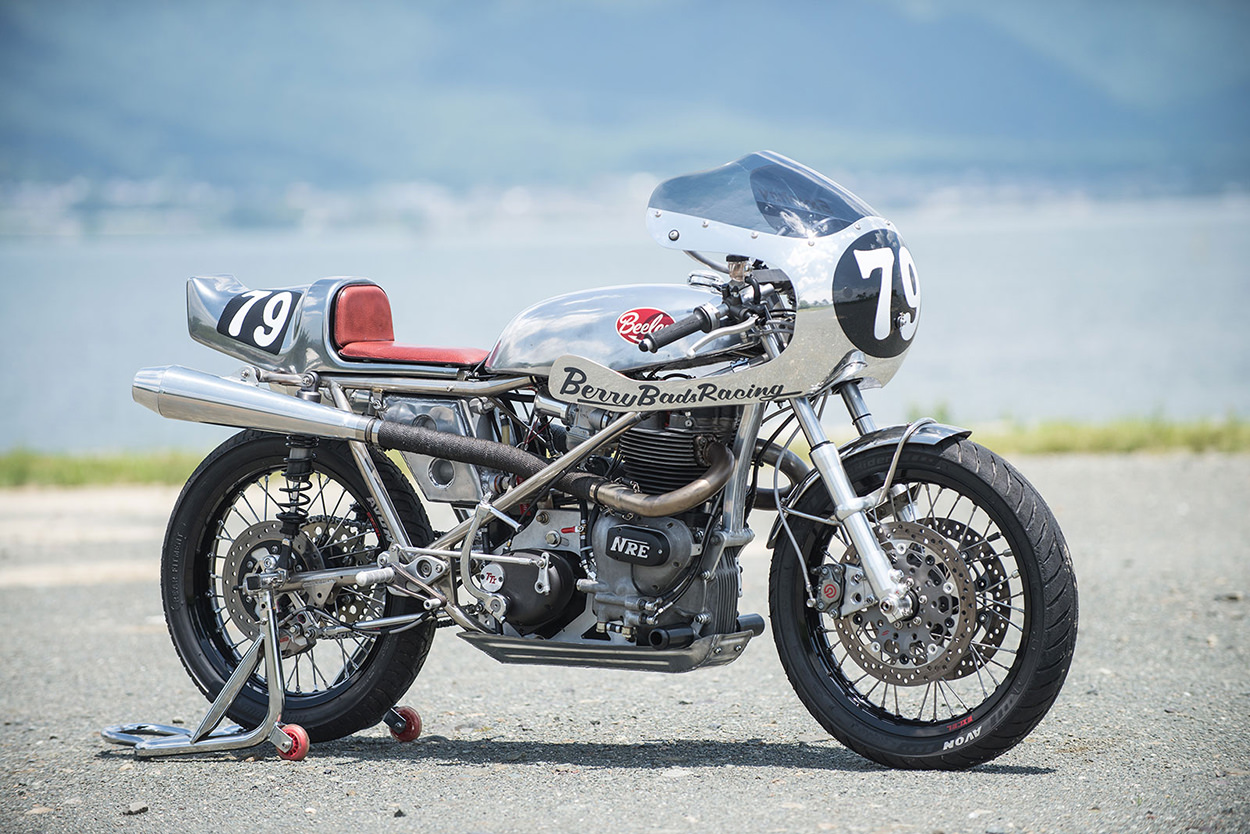 Weslake racer by Berrybads Kyohey Sugimoto of Berrybads MC is one of those upper-echelon Japanese builders who deserves a higher profile outside his home country.

He built this stunning machine during Covid lockdowns, with the aim of competing in pre-1972 classic race events. The core of the bike is an 8-valve Weslake Nourish engine: originally penned by famed engine designer Harry Weslake, it was developed and refined by race engineer David Nourish. 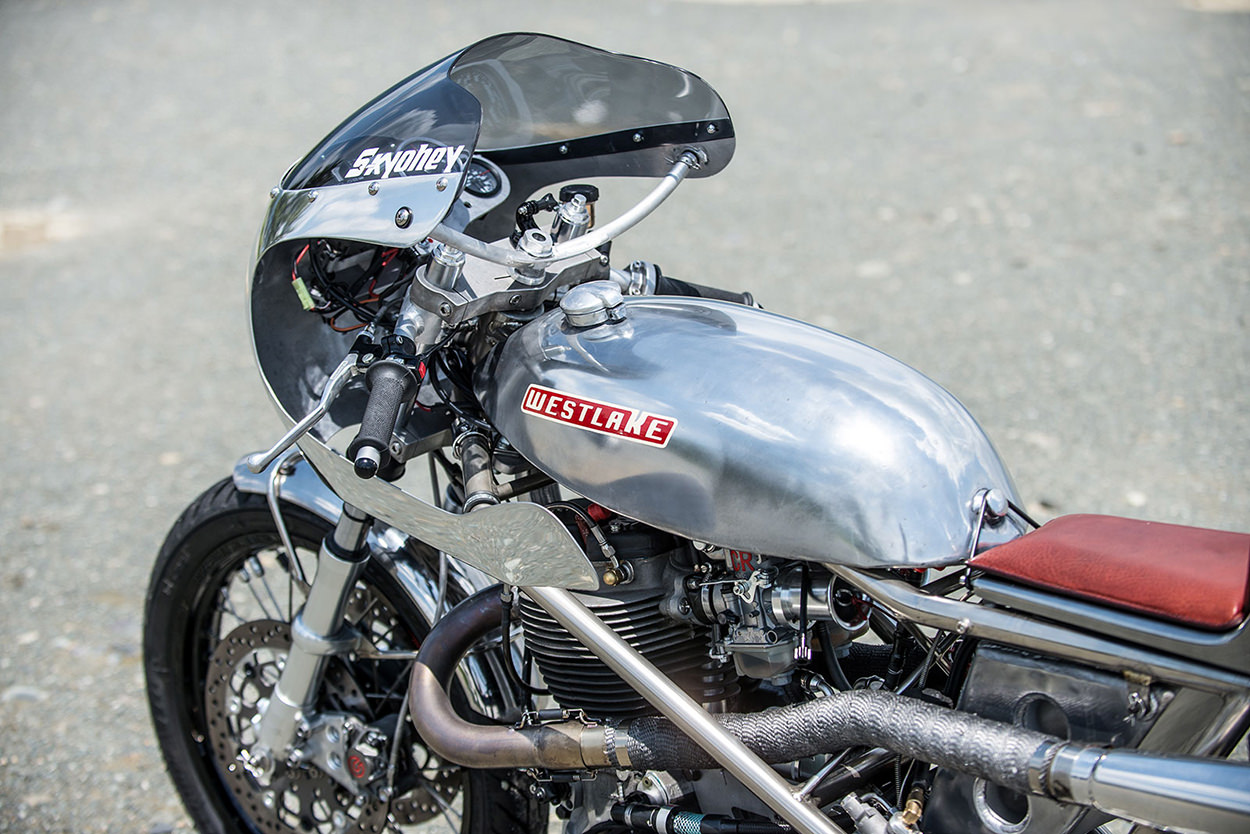 Sugimoto-san rebuilt and strengthened the motor to cope with the rigors of racing, and added a pair of new Keihin CRS37 carbs. Then he installed it into a nickel-plated Seeley Mk 4 frame, which uses the engine as a stressed member.

Power hits the back wheel via a Bob Newby primary drive, and the gearbox is a 6-speed unit from the New Zealand specialist TTI. 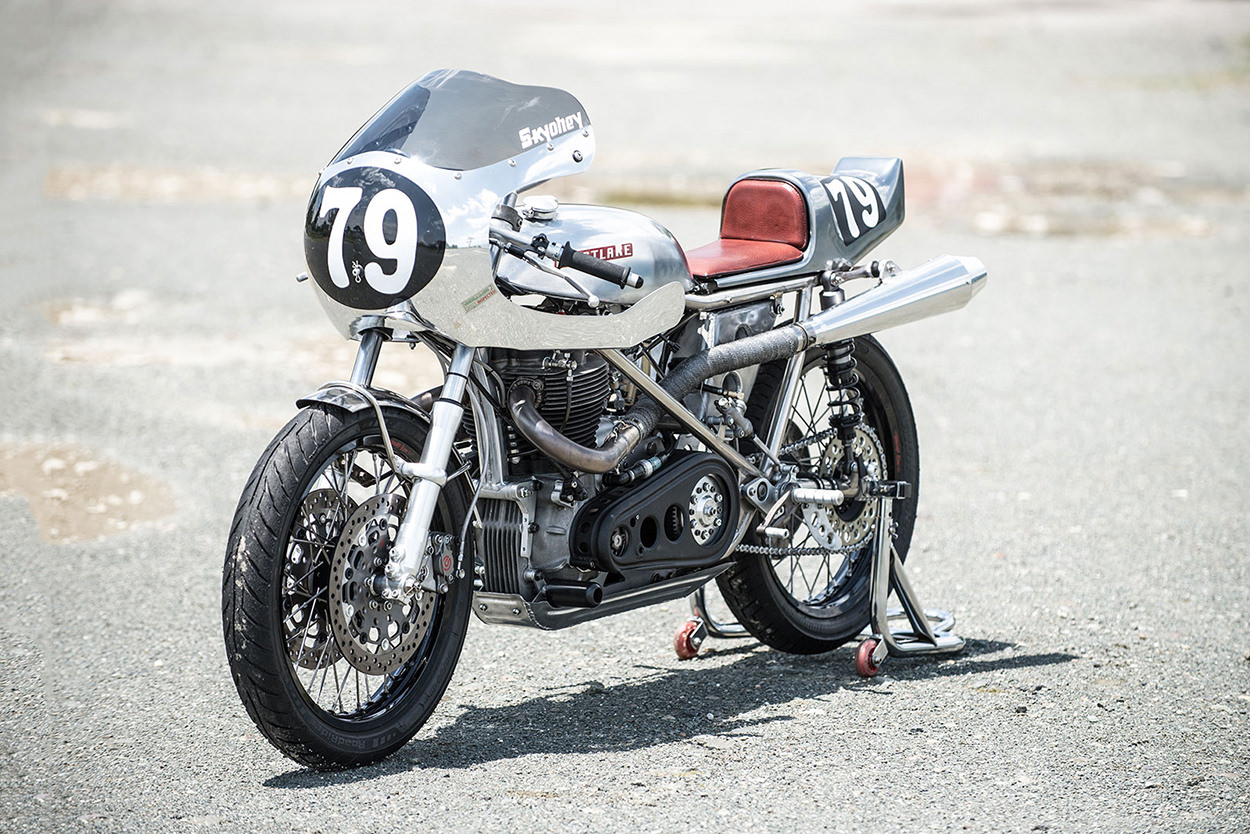 The suspension is a real mix of parts and eras, starting with an early Yamaha SR hub at the front and a current-model YZ setup at the back. The rims are Excel, the forks are classic 35mm Cerianis, and the shocks are modern Nitron NTRs.

The tank is aluminum but, despite appearances, the tail unit is not—it’s fiberglass, and hides an alloy oil catch can. 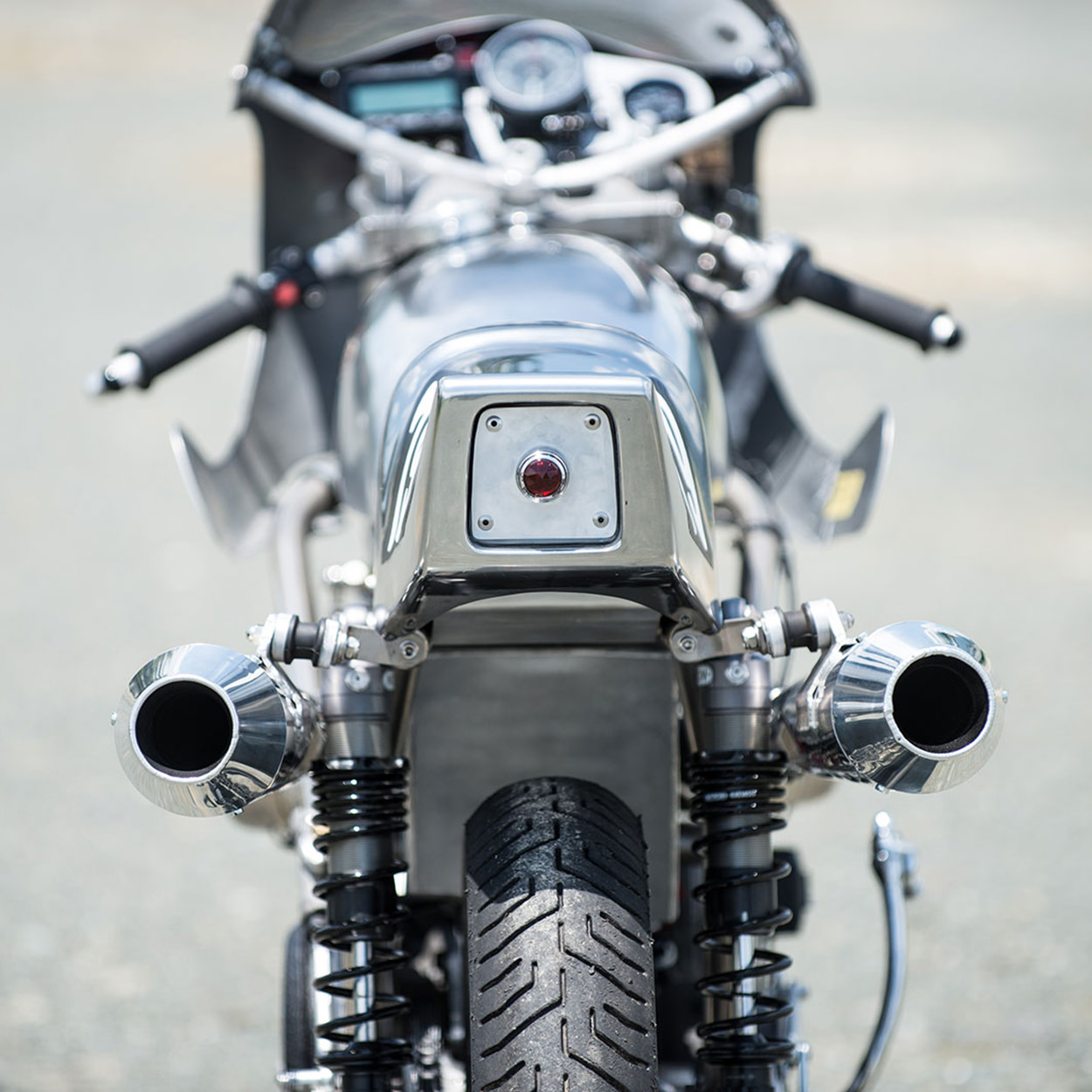 Sugimoto has called this wonderful creation ‘Beeley Westlake’—Beeley as an amalgamation of Berrybads and Seeley, and ‘Westlake’ as a reference to his hometown, which is on the western shores of Japan’s largest freshwater lake.

He’s been racing it in the ‘Legend of Classic’ series, and won his first event at Fuji Speedway with the bike clocked at 230 kph through the speed trap. The last race, at the Tsukuba circuit, didn’t quite go to plan though, with a crash as Sugimoto was chasing the race leader.

Right now, the Weslake is being repaired and fettled for its return to the track. It’s in good hands. [Via] 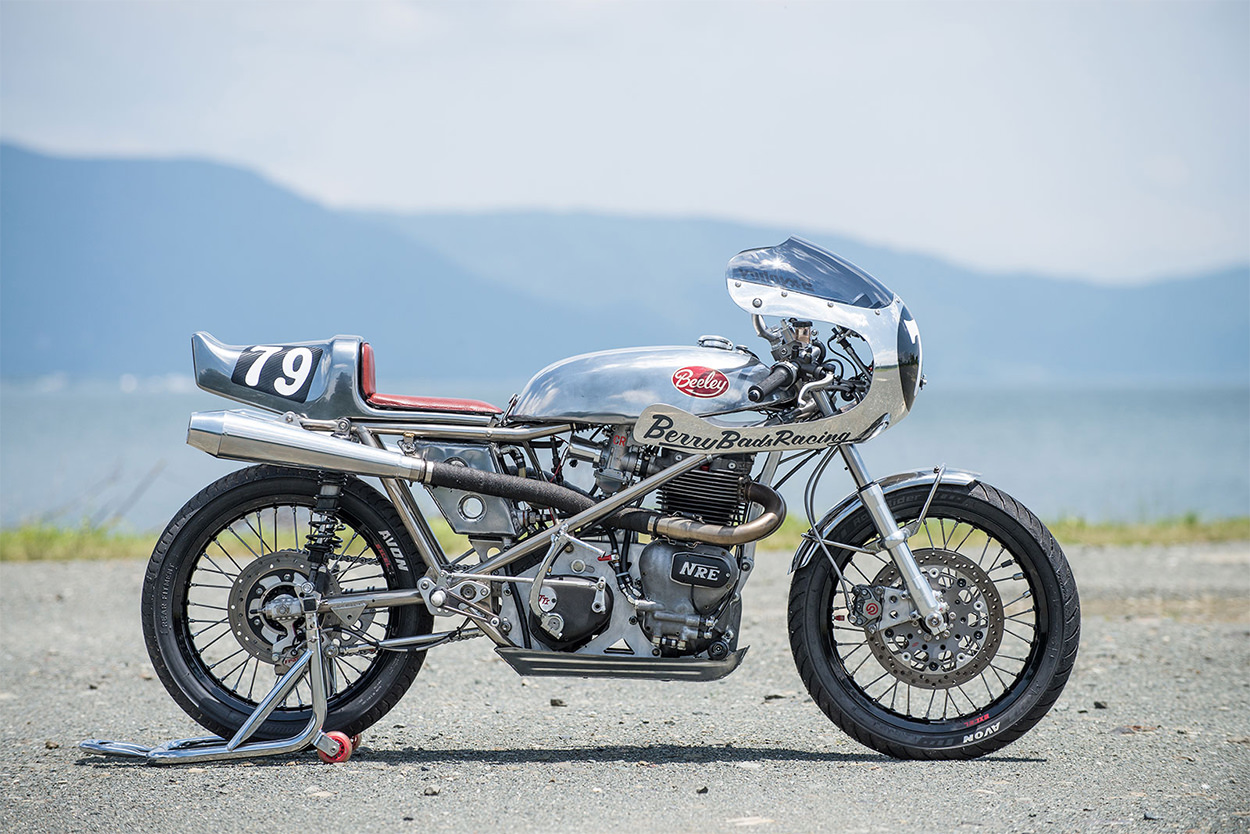