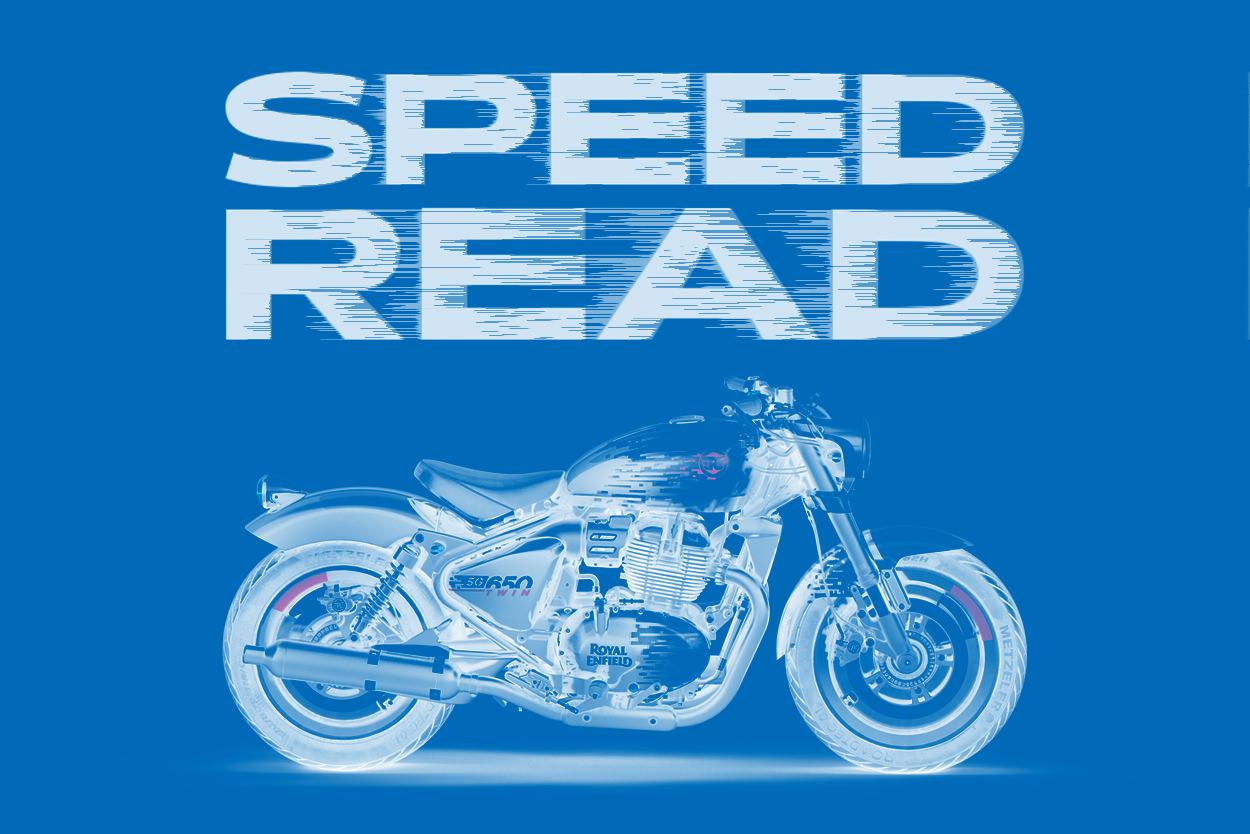 The landmark moto show EICMA has returned for 2021, and there’s a palpable if cautious sense of relief in the industry. New bikes are relatively thin on the ground in Milan this year, because the no-shows include the American marques, BMW and Ducati. But there’s good stuff coming out, especially from the European manufacturers. Here, we’ve picked out four bikes that got our motors running. 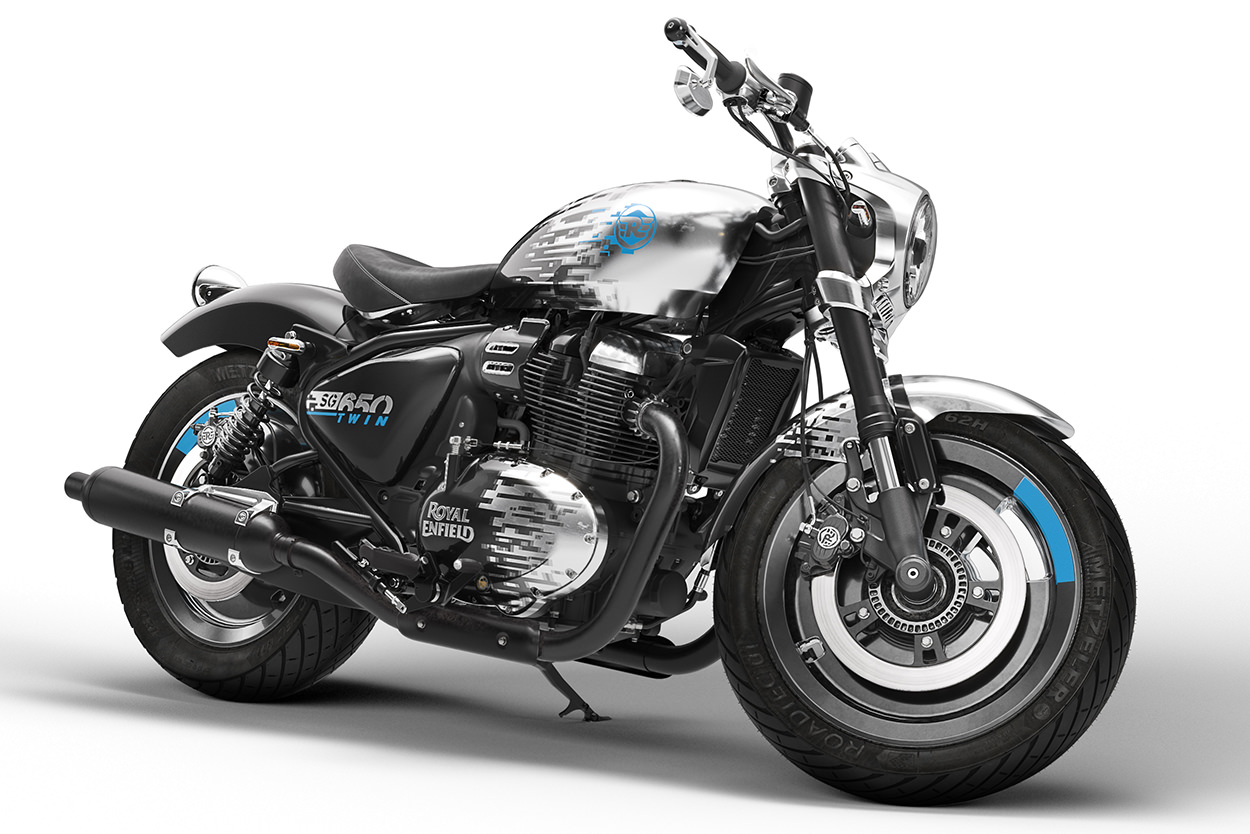 Royal Enfield SG650 Concept EICMA was short on concepts this year, but Royal Enfield revealed a clue to its future design direction with the SG650. According to the brand, this machine takes the company’s ‘classic design sensibilities’ and tweaks them to show what the Royal Enfields of the future could look like.

Despite the relatively orthodox if pleasant styling, this is probably a pretty significant design—since RE is now the world’s biggest maker of ‘middleweight’ bikes. It also suggests that RE is going after the bobber market, since this is the second bobber-style concept after the KX 838 shown a couple of years ago. 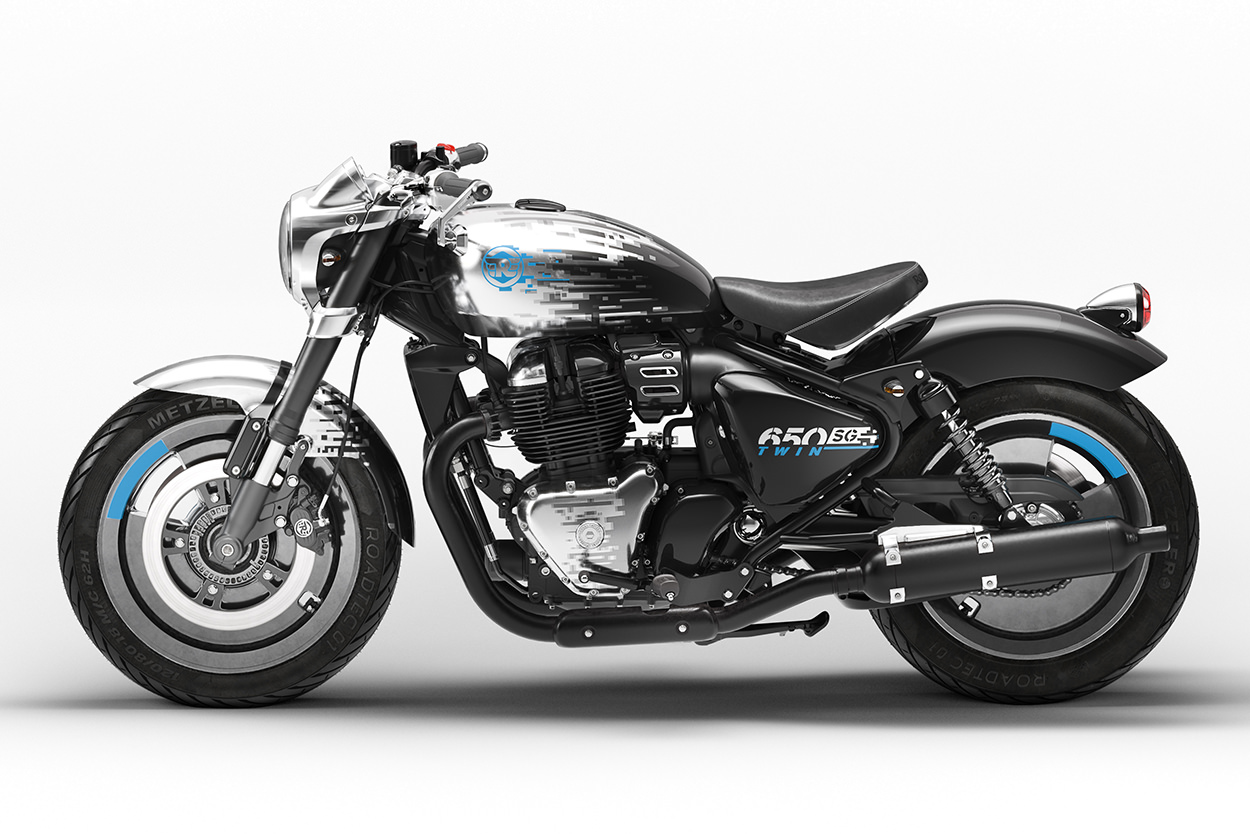 Design boss Mark Wells says the goal was to build a “neo-retro interpretation that pushes the boundaries of what a Royal Enfield motorcycle could look like, but at its core, still celebrating that iconic Royal Enfield DNA.”

To our eyes, the SG650 looks good, right down to the fat tires, low stance and bare aluminum overlaid with pixelated graphics. The tank has been CNC billet machined from a solid block of alloy, and so have the wheel rims—which have integrated ABS, custom calipers and dual discs. 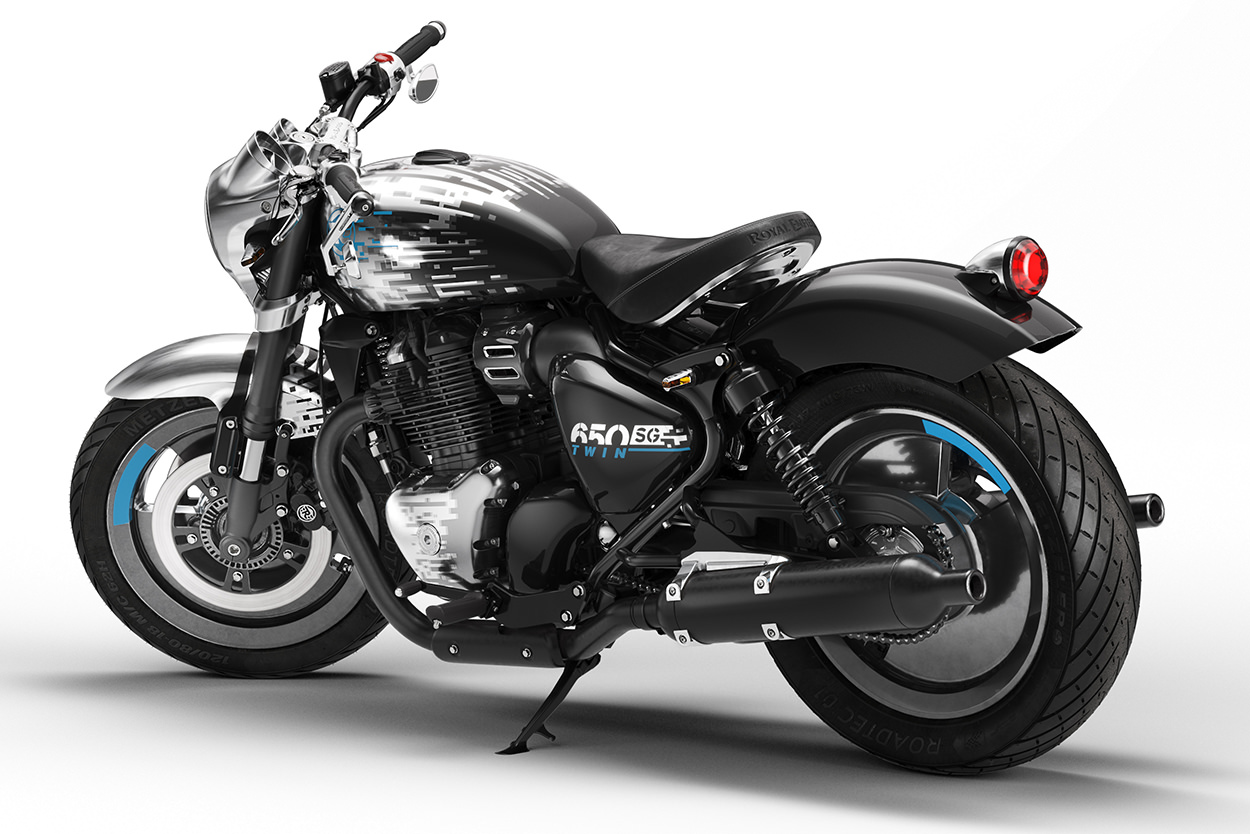 Aluminum is also used for the combined top yoke and headlight nacelle setup, and the wide bars are dressed with aluminum switch cubes. The other elements have a more conventional retro style, with twin rear shocks and a black leather ‘floating’ solo seat. The 650 Twin engine appears to be the familiar production item.

If the SG650 went into production, it’d be a stylish but lower-cost alternative to the Triumph Bonneville Bobber. We reckon there’s a market for it. 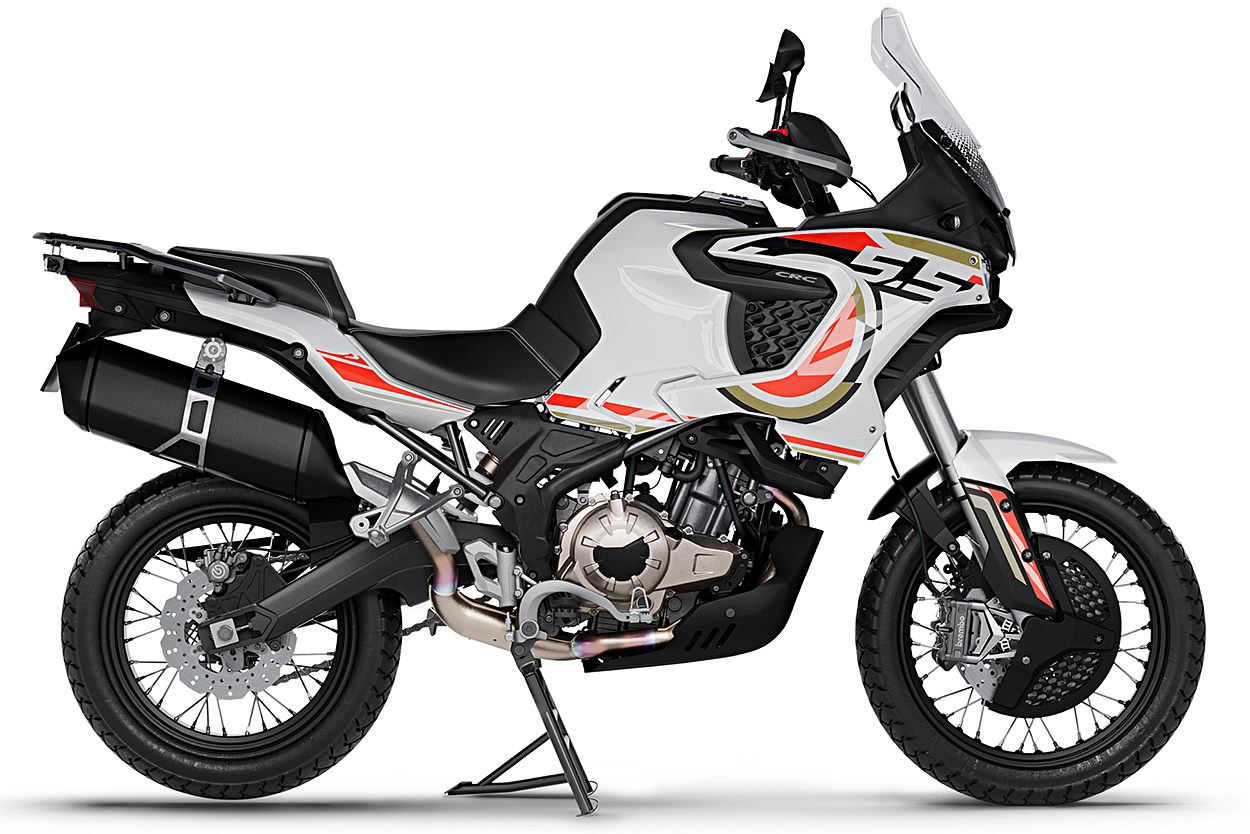 The MV Agusta Lucky Explorers MV Agusta’s stand was popular, and not just for showing the stunning Magni Italia. After last week’s tease, we also got to see MV’s two new ADV bikes (and engines). The ‘5.5’ [above] uses a 554cc twin with 47.6 hp, developed with the help of the Chinese company Qianjiang, which owns Benelli. 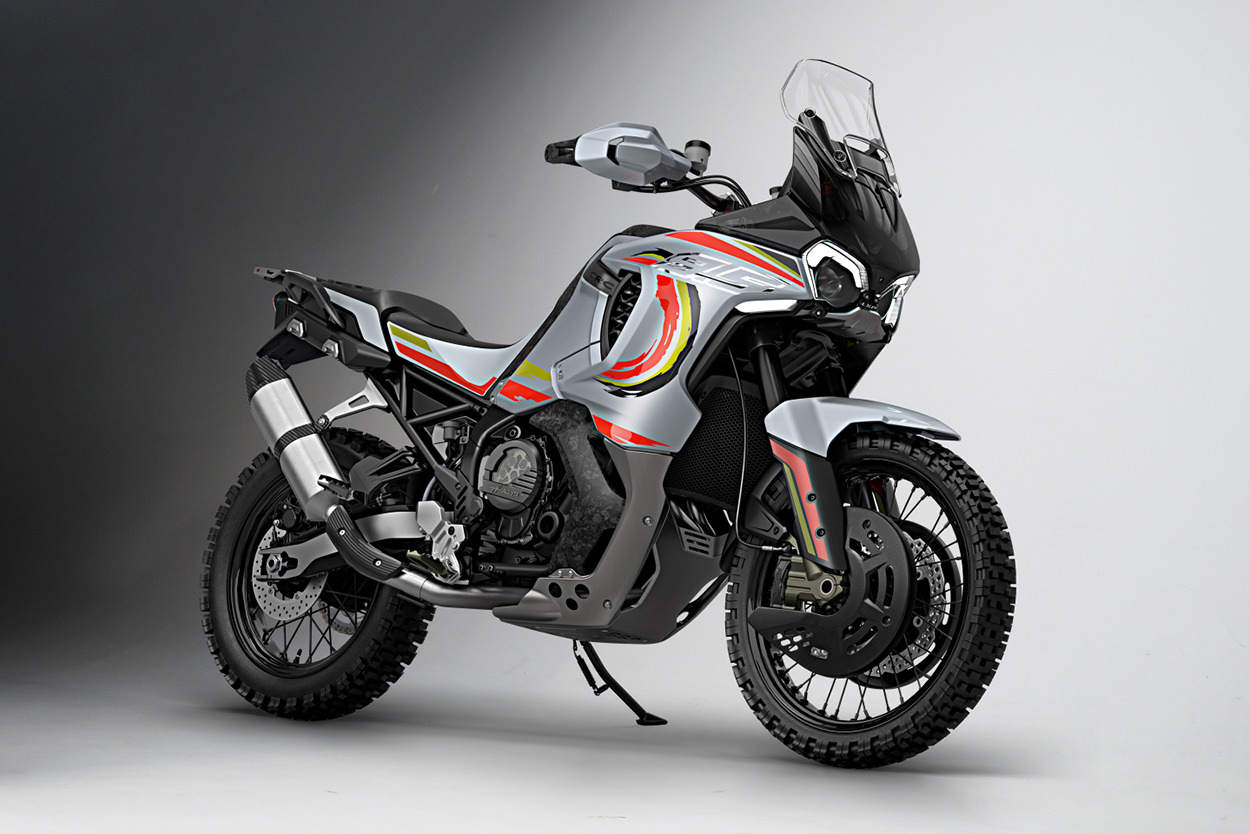 Visually, both bikes hark back to the Dakar Rally racers of three decades ago, notably the Cagiva Elefant. The styling is sharp and modern, with smart graphics and no superfluous ‘beaks.’

The machines on the MV Agusta stand at EICMA are prototypes, but close to production spec. MV has not announced pricing, but word is that they will be formally released next year. 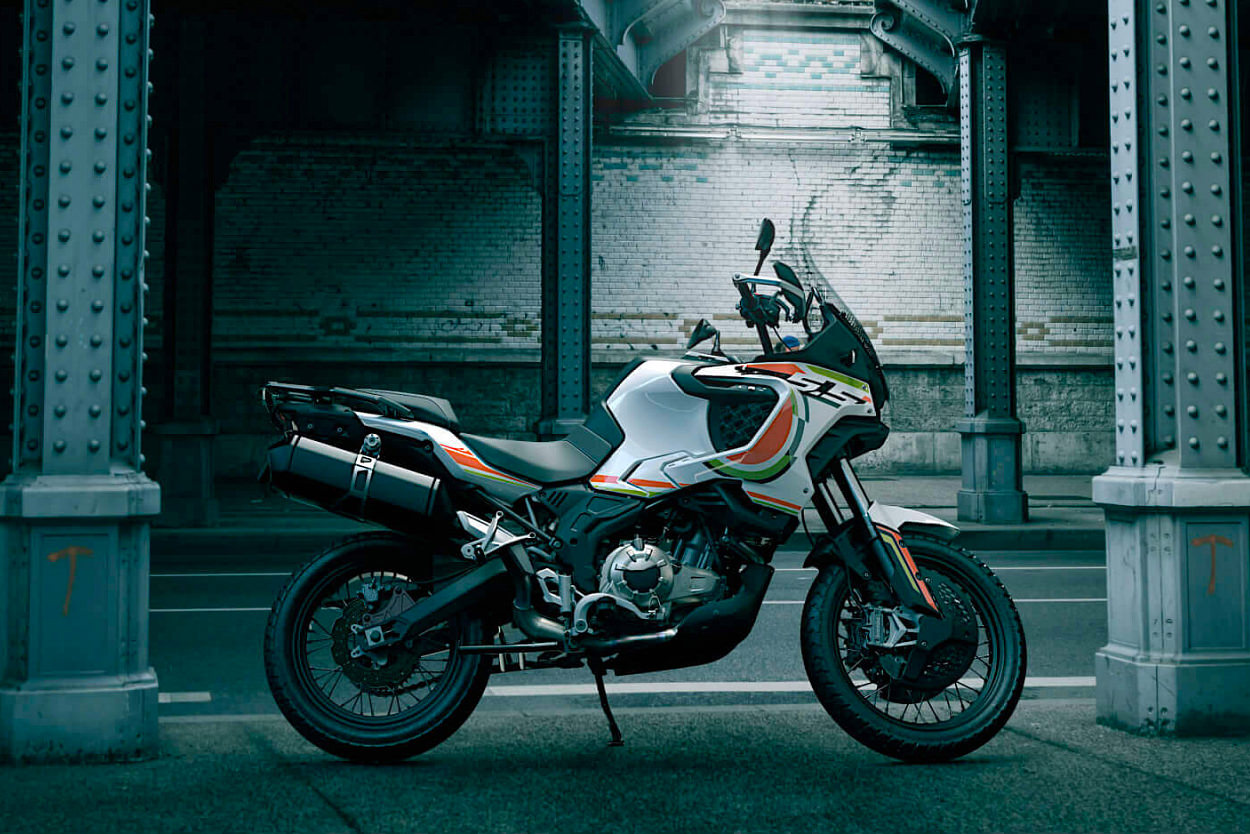 Despite the nomenclature and looks, the 5.5 is not merely a scaled-down version of the 9.5. The dry weight for both bikes is listed at 220 kg (484 pounds), which is passable for the larger bike but a little on the hefty side for the smaller bike. This lends credence to the idea that the 5.5 is a cousin of the Benelli TRK502, a popular rival in Europe to the Honda CB500X.

The specs suggest a measure of offroad ability for both bikes though, with hefty sump guards, hand guards and disc covers. The wheelsets are F19/R17 for the 5.5 and F21/R18 for the 9.5. 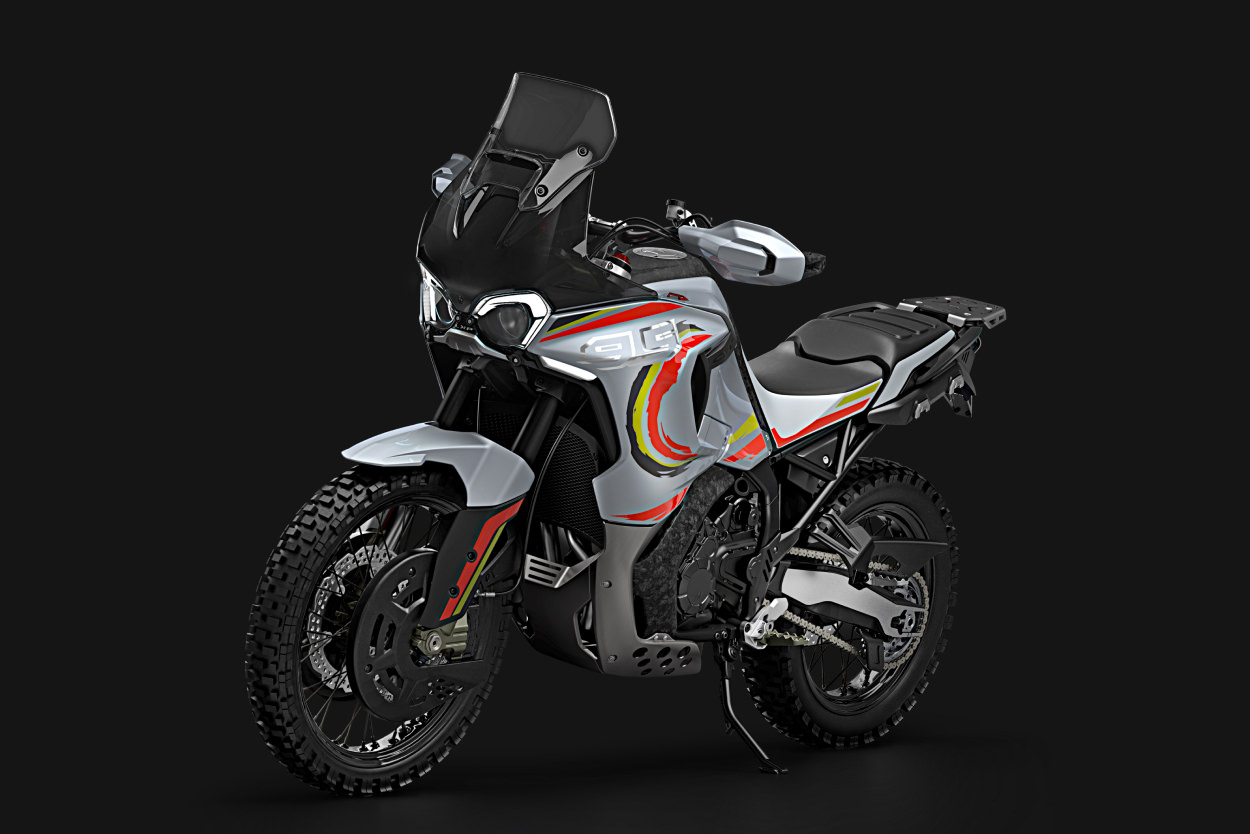 It’s further proof that the ADV market is running red hot at the moment. Next year, it’ll be intriguing to see how the 9.5 stacks up against the Husqvarna Norden 901 and the Ducati DesertX. [Lucky Explorer Project] 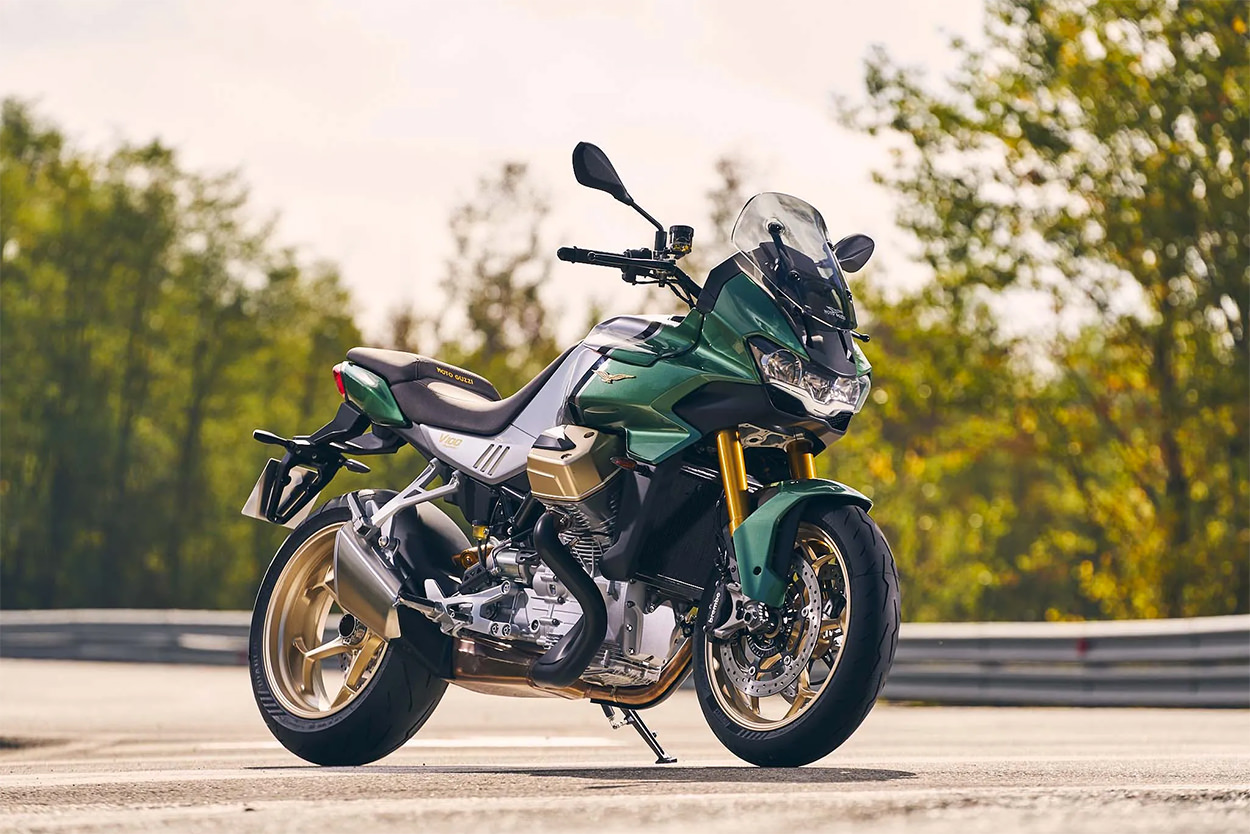 Moto Guzzi V100 Mandello Back in September, Moto Guzzi gave us a glimpse of the new V100 Mandello sport tourer. The venerable Italian marque has now officially launched the bike, and it comes with quite a few surprises. 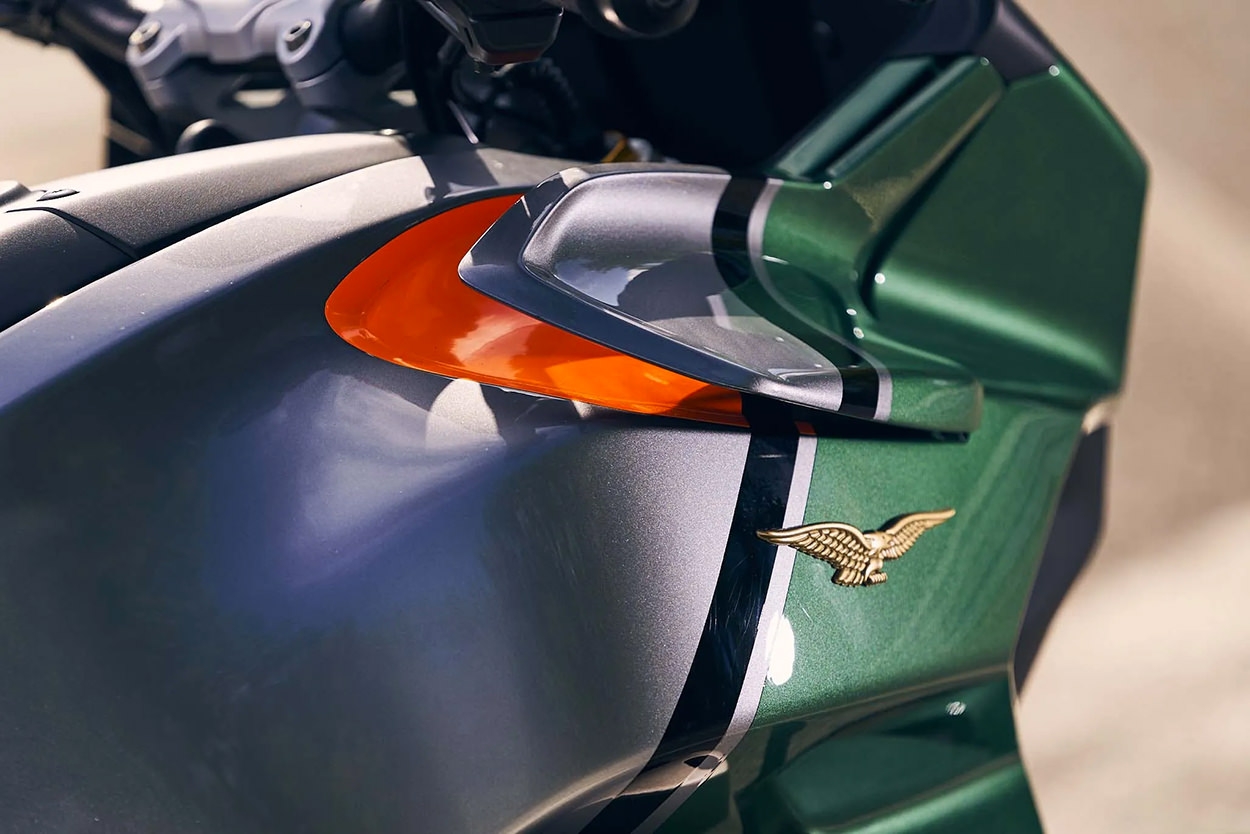 Most notable is the appearance of ‘adaptive aerodynamics’—the kind of innovation you’d expect to see on a high-end sportbike. Flanking the headlights on the fairing are air deflectors, which adjust according to speed and riding mode. Apparently they can reduce wind buffeting by up to 22% for the rider. 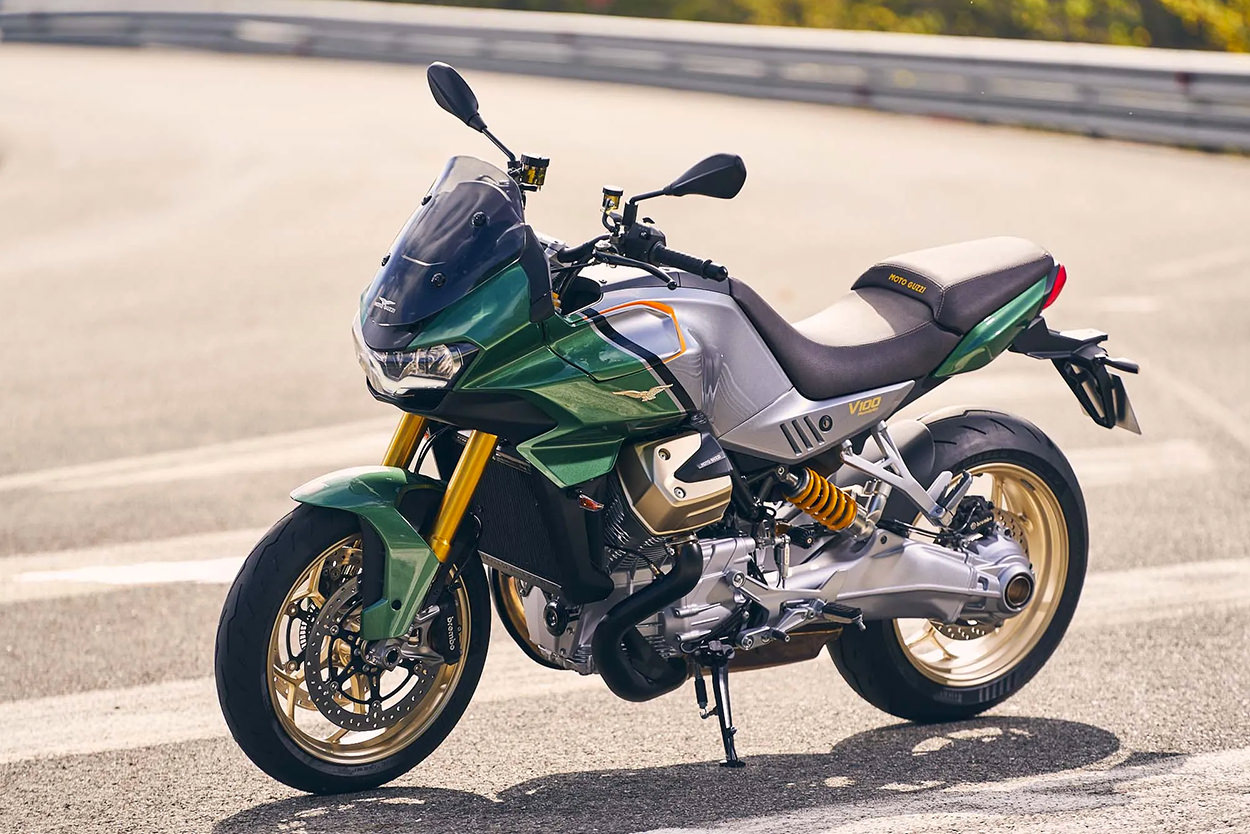 Buyers will get three switchable engine maps, four riding modes, four levels of traction control, and even three levels of engine braking. The electronics package also includes cruise control and cornering ABS and the rider aids are tied together with a six-axis IMU.

There will also be an up-spec version that adds semi-active Öhlins suspension, a quickshifter, heated grips and a Bluetooth connection to your smartphone.

It’s all very high-tech for a ‘traditional’ manufacturer like Moto Guzzi, and should interest fans of comfortable, long-legged sports tourers. The secondhand market for older tourers is healthy in most countries; hopefully the V100 will inspire other factories to deliver more modern options. [Moto Guzzi V100 Mandello] 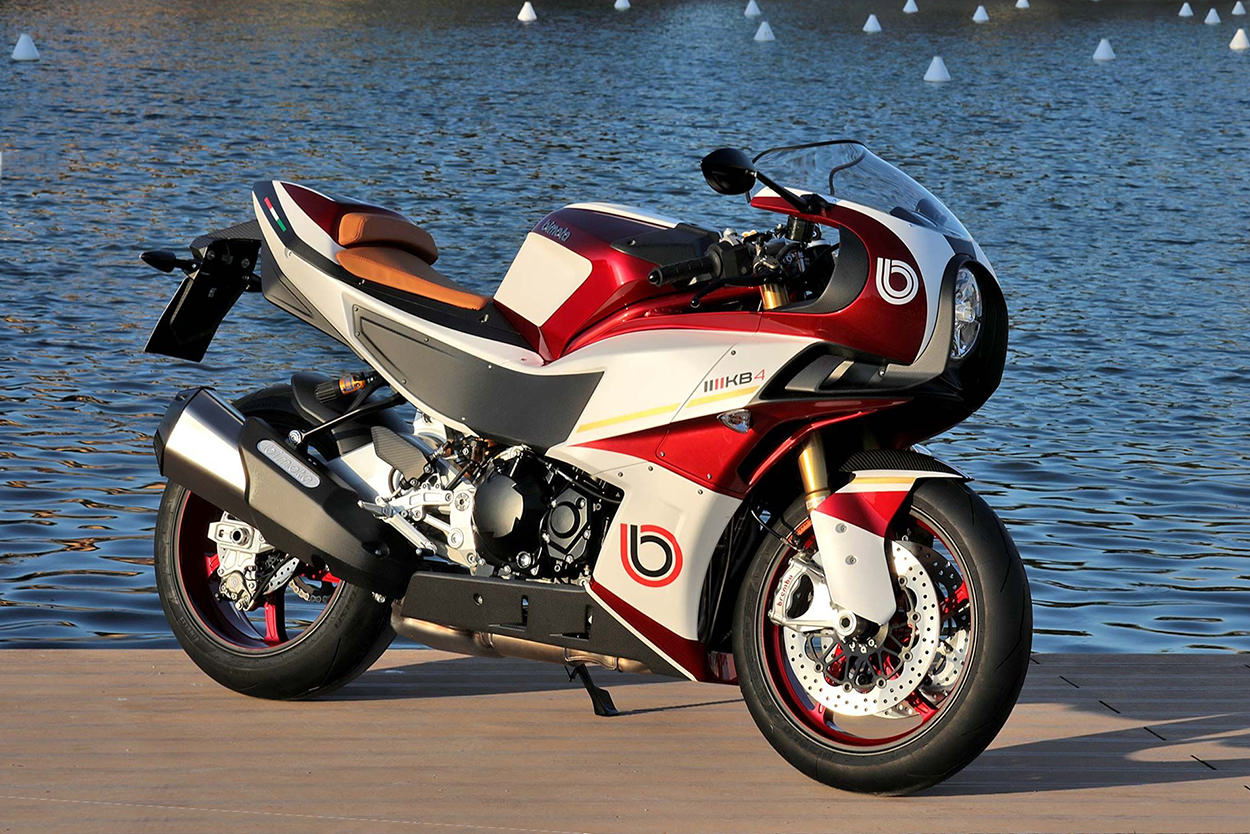 First shown as a prototype a couple of years ago, the KB4 is now ready to enter production and uses the engine from the Ninja 1000SX. 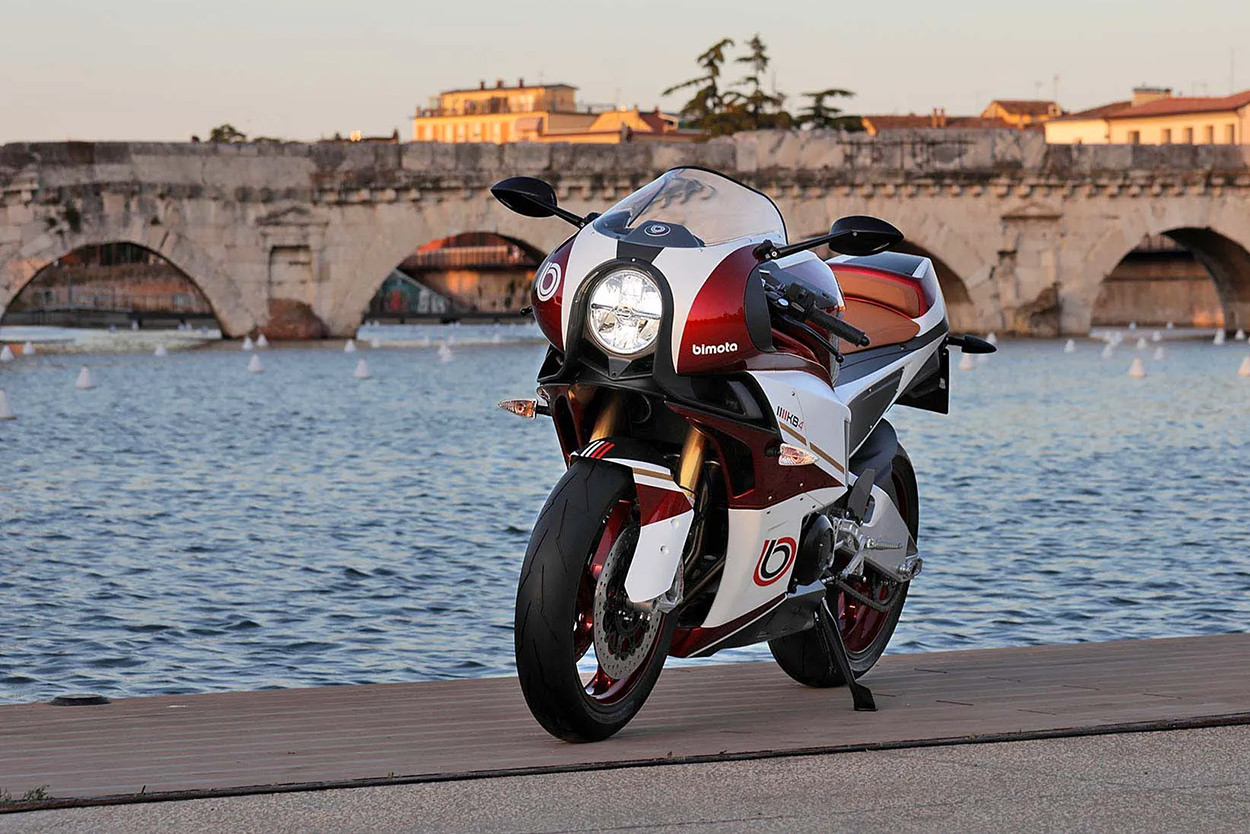 Despite the size of the engine, the KB4 is unusually compact. The wheelbase is just 54.7 inches, the same as a Suzuki GSX-R750. And with a claimed curb weight of 428 pounds [194 kg], it’s only a fraction heavier than said Gixxer.

The frame is a mix of classic thin steel tubes in a trellis layout, plus billet machined aluminum. To keep the length down, the radiator is under the seat, and fan-assisted. 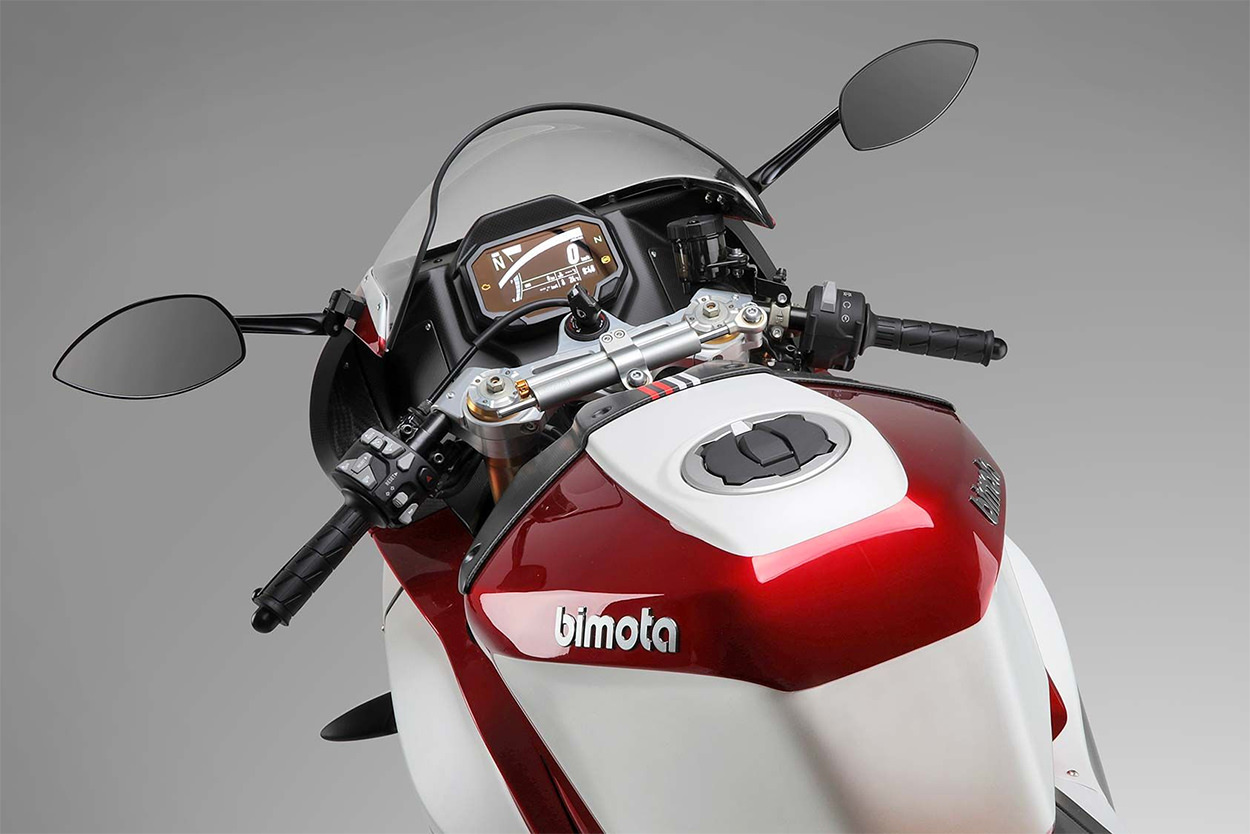 The suspension is state-of-the-art, with 43mm Öhlins FG Road & Track forks and an Öhlins TTX36 shock hooked up to a billet aluminum swingarm. The forged 17-inch wheels appear to be magnesium—there’s no official confirmation—and the Brembo brakes include a classic twin 320mm front disc setup.

We’re even more excited by the news of an ‘RC’ version. That stands for ‘Race Café’ apparently, which is odd because the mainstream faired version has more of a trad café vibe and the RC looks more like a ‘super naked.’ Maybe Bimota is harking back to the stripped-down HB1 of the early 70s with this one. 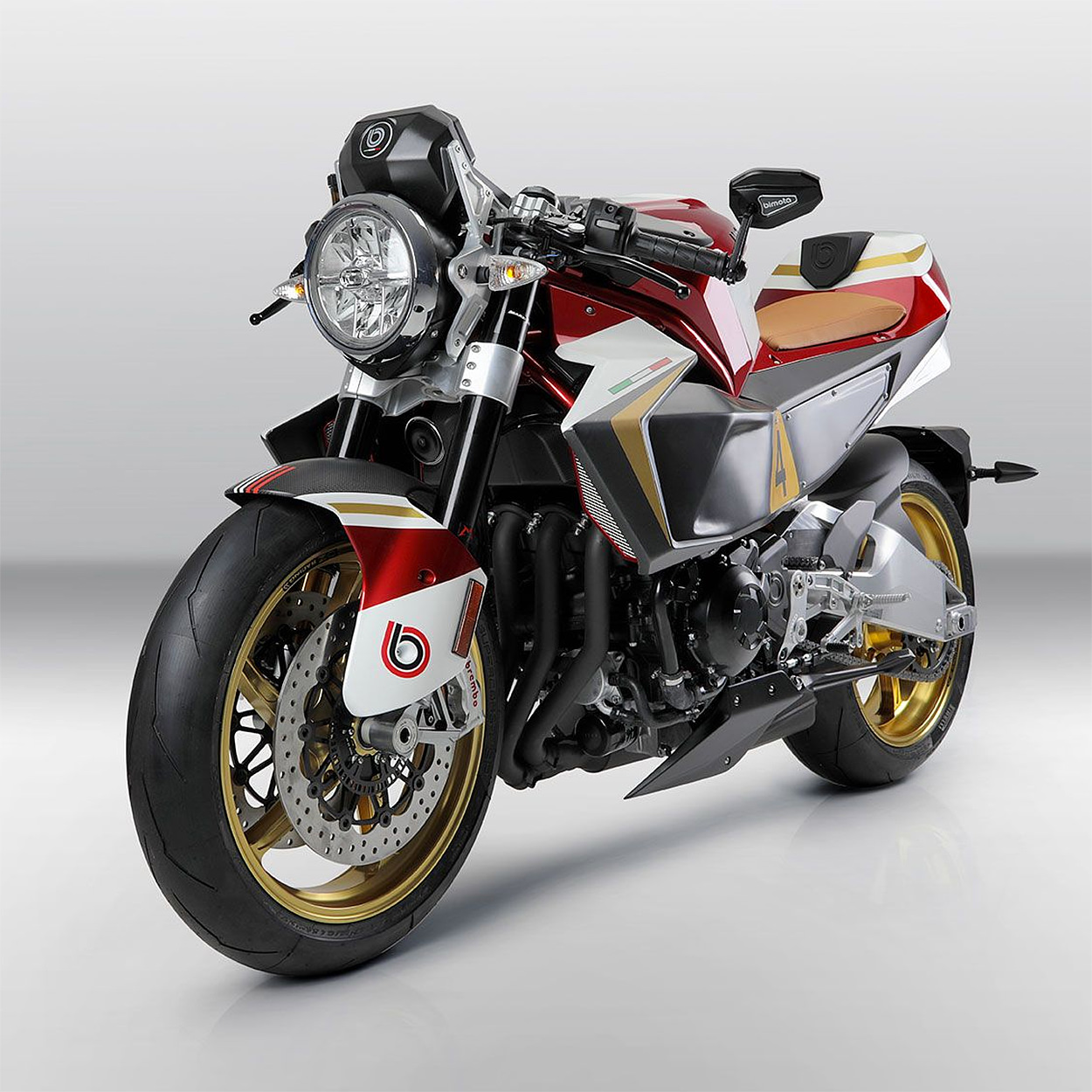 There’s no word on pricing yet. But with carbon fiber bodywork on the spec list, painting by hand and a promise of the ‘latest electronics,’ you can bet the KB4 won’t be cheap. We just have a feeling it’ll be worth every cent. [Bimota]