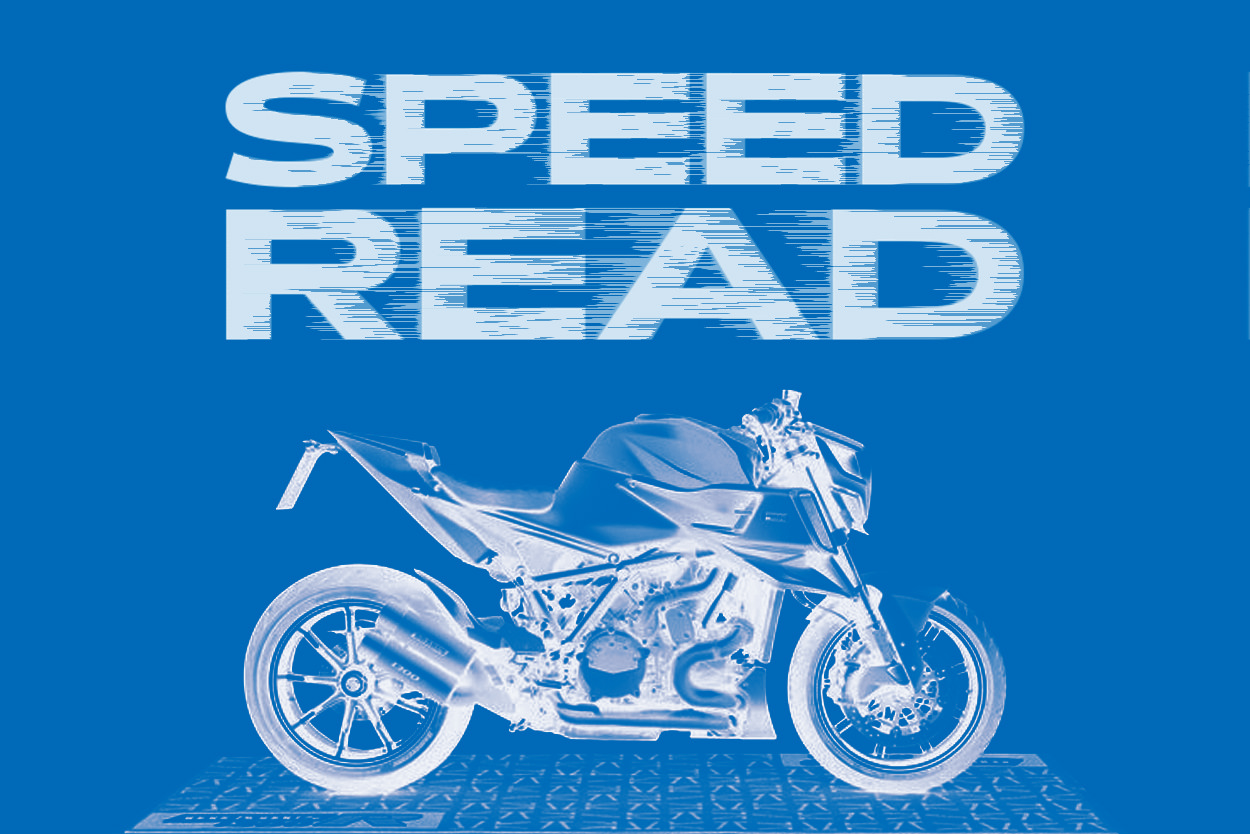 This week we’ve got a limited edition machine from the German car tuner Brabus, a delightful R nineT cafe racer from Switzerland, and a box-fresh Yamaha TZ500 from the north of England. Plus news of Triumph’s TE-1 electric sportbike. 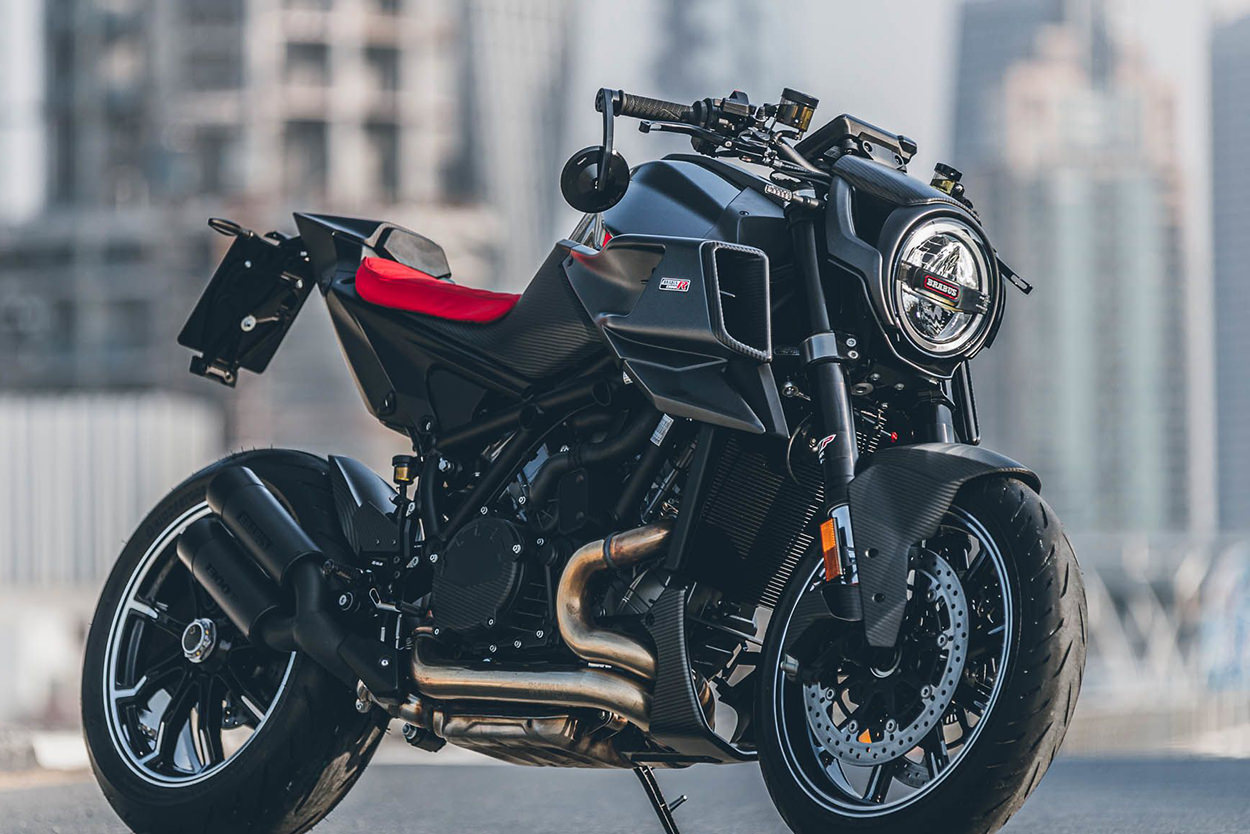 The Brabus 1300R Most motorcyclists also have a car in the garage, but collaborations between makers of two- and four-wheeled vehicles are surprisingly rare.

That alone makes this machine newsworthy. It’s based on the wild KTM 1290 Super Duke R EVO, the 180 hp Austrian hyper-naked, and just 154 units will be made—half in red, and half in black. 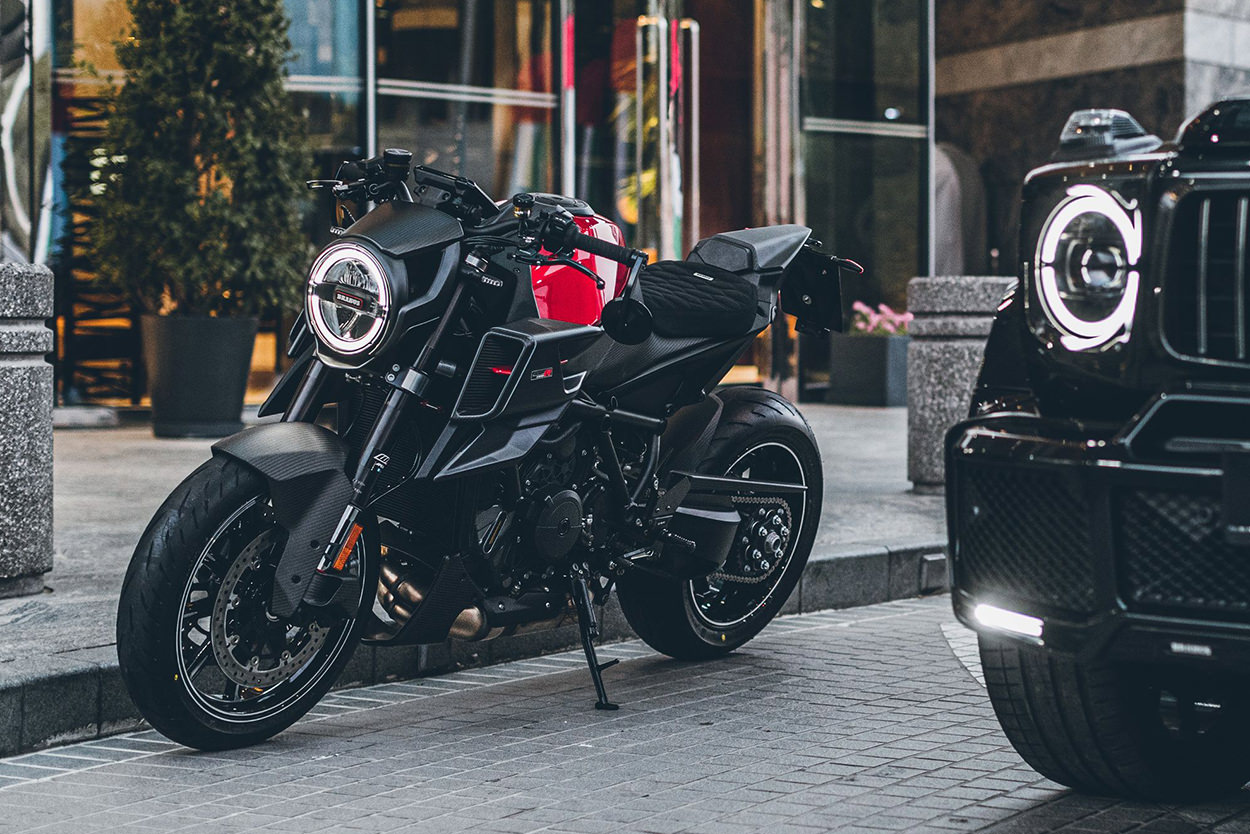 Car fans will know Brabus (est. 1977) as the German tuning firm that builds heavily customized Mercedes, and also restores older Benzes. If you live in a large city, that insane-looking G-Class SUV you once spotted was probably converted by Brabus. 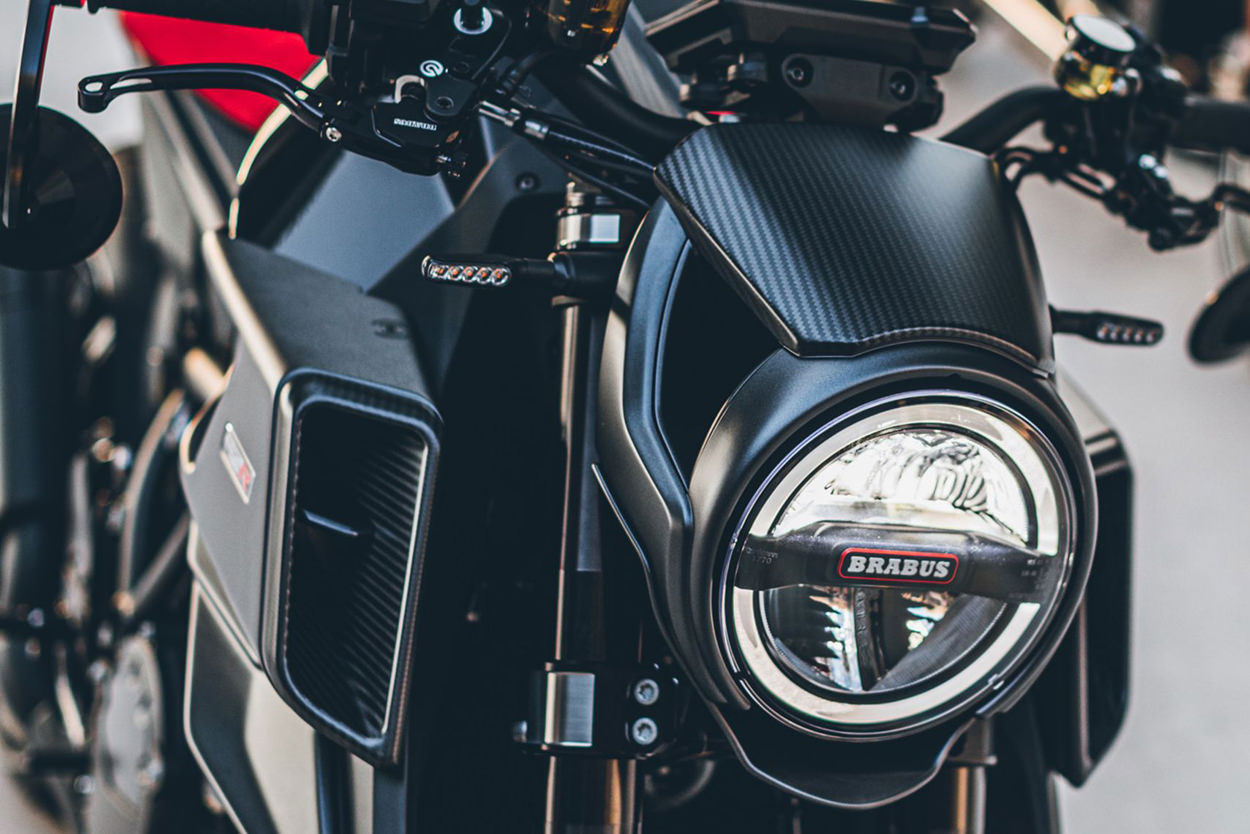 The drivetrain is unchanged, but you get Brabus-branded forged wheels, a different twin-muffler setup, and tweaked bodywork with carbon fiber elements. The biggest differences are new air ducts, a new belly pan, and a round headlight (that might have been lifted from the Husqvarna parts bin).

The WP semi-active suspension is a slightly higher spec too, with variable damping that adjusts itself on the fly. And there are CNC-machined triple clamps, brake and clutch levers and footpegs. Finally, in a move that’s probably more in sync with the typical Brabus customer, the seat is heated. 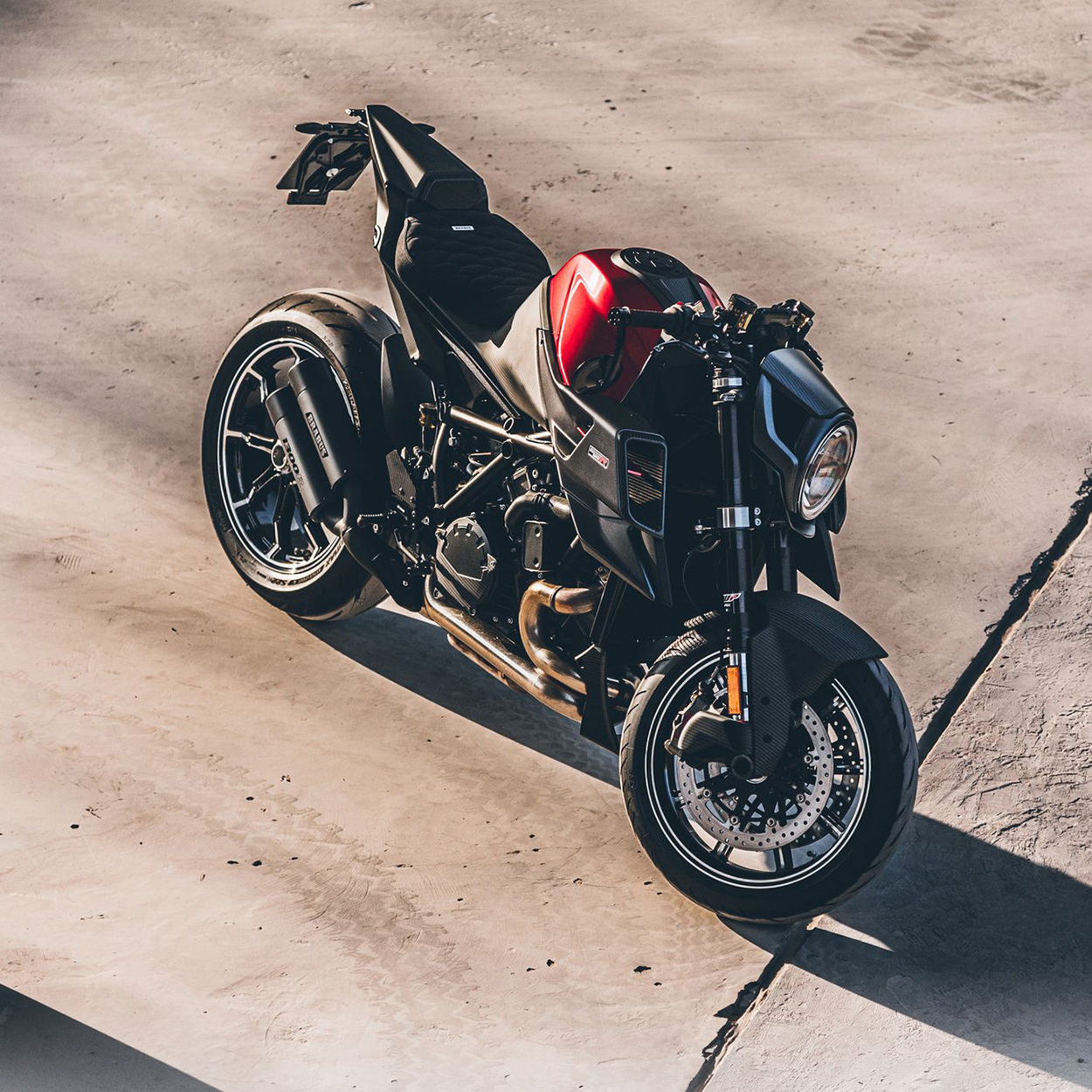 Understated is not a word usually associated with Brabus cars, but to our eyes the 1300R actually looks better than the stock KTM. And although it’s a helluva lot of money to pay for a moderately modified hyper-naked, we’d be very happy to put one in the EXIF garage. [Order] 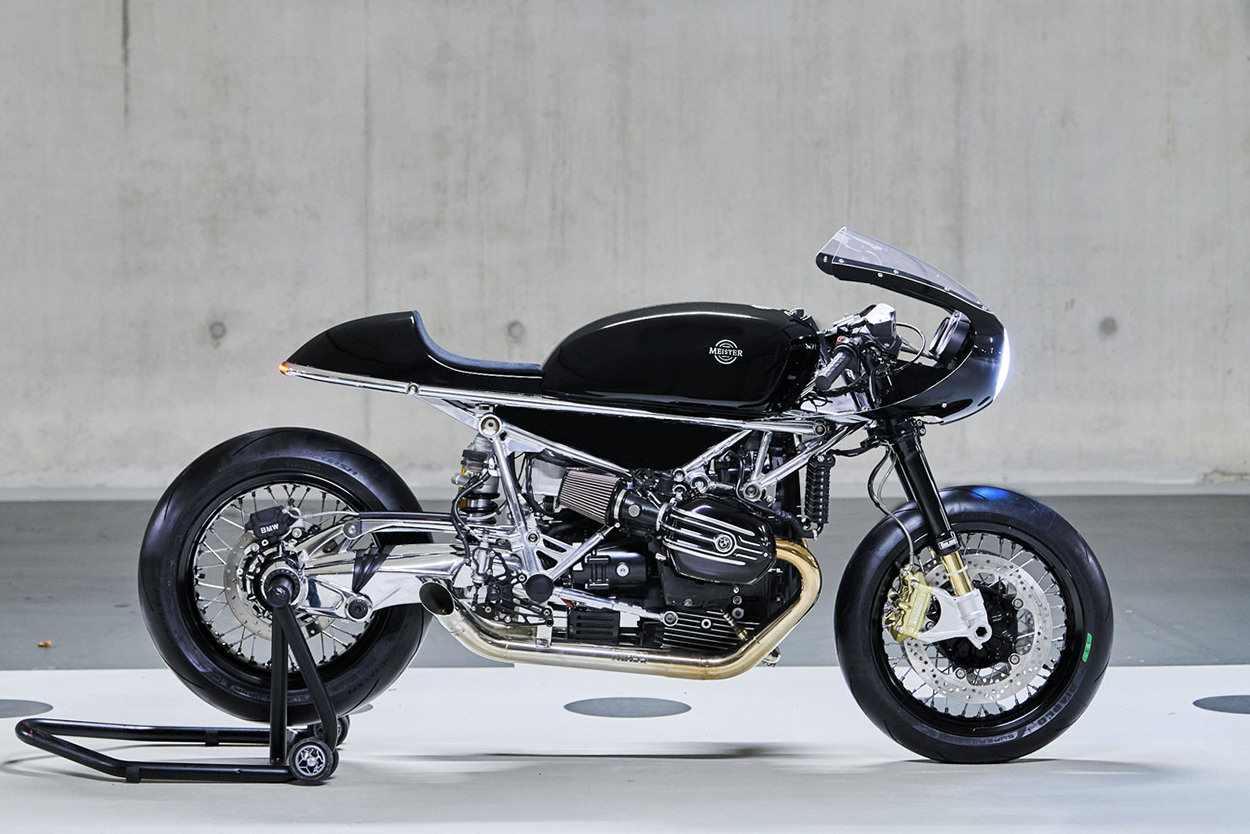 BMW R nineT by Meister Engineering You can usually spot the influences when examining a custom build, but the backstory to this BMW is more obscure than most. A few years ago, Geneva-based Antoine Meister built a 1977 R100S café racer—and he’s literally replicated the design on this 2014-spec R nineT.

It was experiment to see if timeless design can be transferred to a different platform, and it worked. Another objective was to get 100% reliability; even though classic airheads are pretty simple and robust, they can’t compete with a modern boxer. 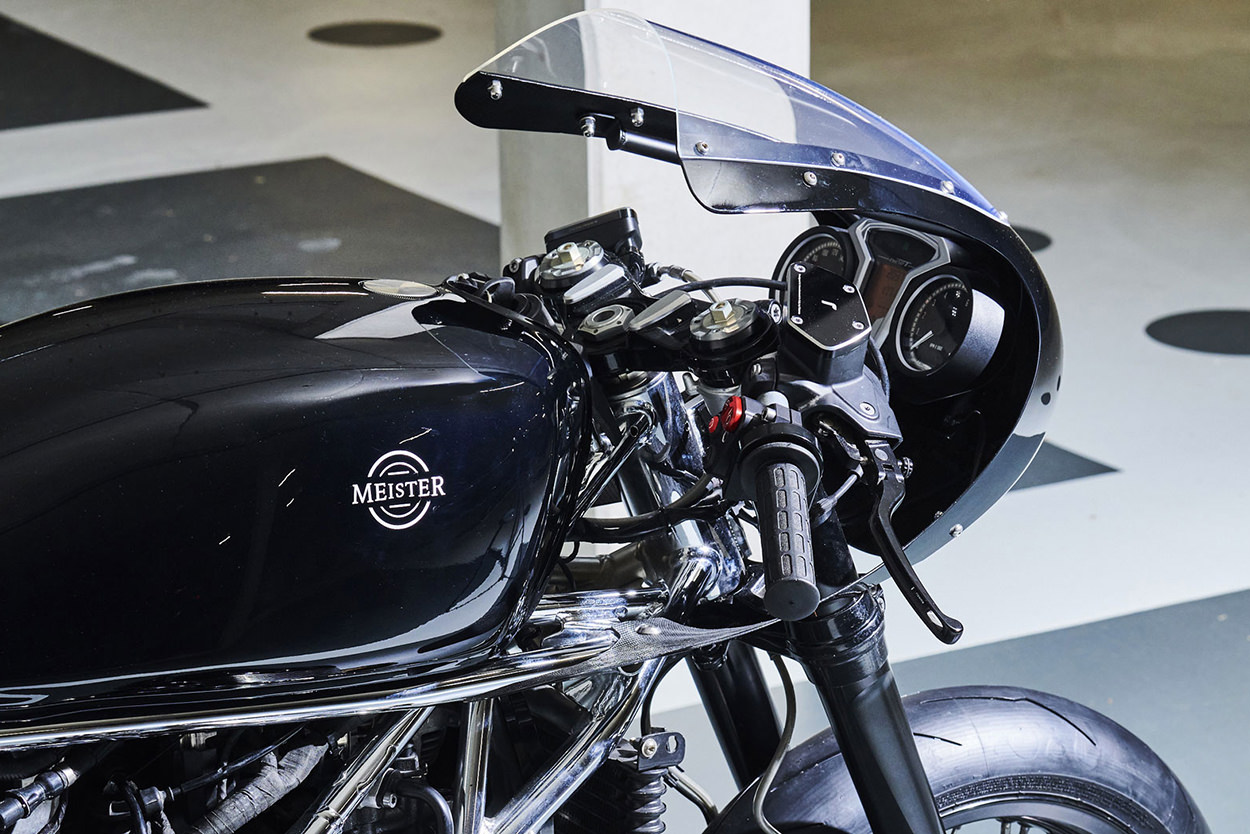 The R nineT is Antoine’s personal ride, and after road tripping around Switzerland, he got back from vacation and couldn’t resist the urge to strip it down.

He then photographed the R100S and laid the images over matching shots of the R nineT to figure out the proportions and placements. With millimeter precision, Antoine designed a new rear subframe to support the bodywork and straighten the visual top line, and then he chrome-plated the entire frame. 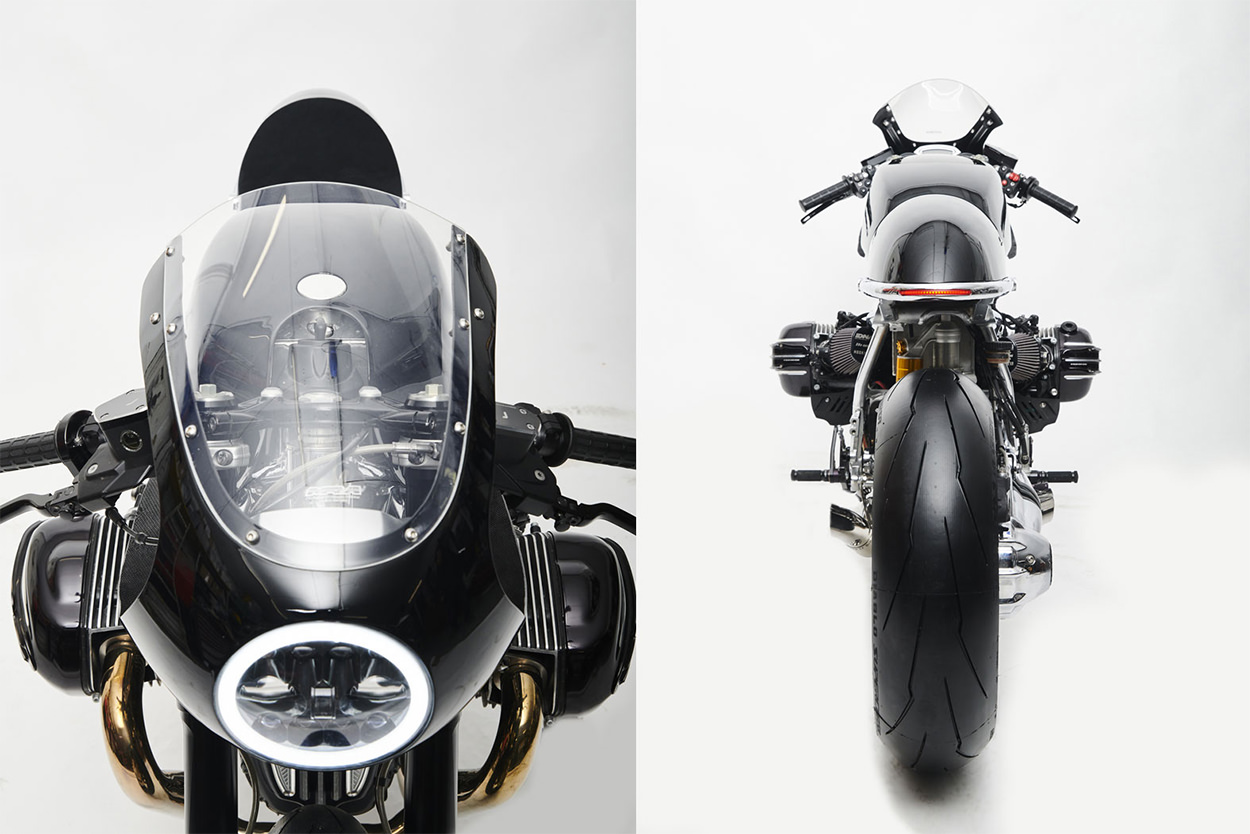 The new bodywork was constructed in-house using composite fiber, and finished in a glossy black to contrast with the framework.

The next step was to improve the R nineT’s already good handling dynamics, so Antoine installed new Öhlins Blackline forks and a matching monoshock, which hooks up to the stock (but chrome-plated) swingarm. Lightweight new rims are shod with Pirelli Supercorsa rubber. 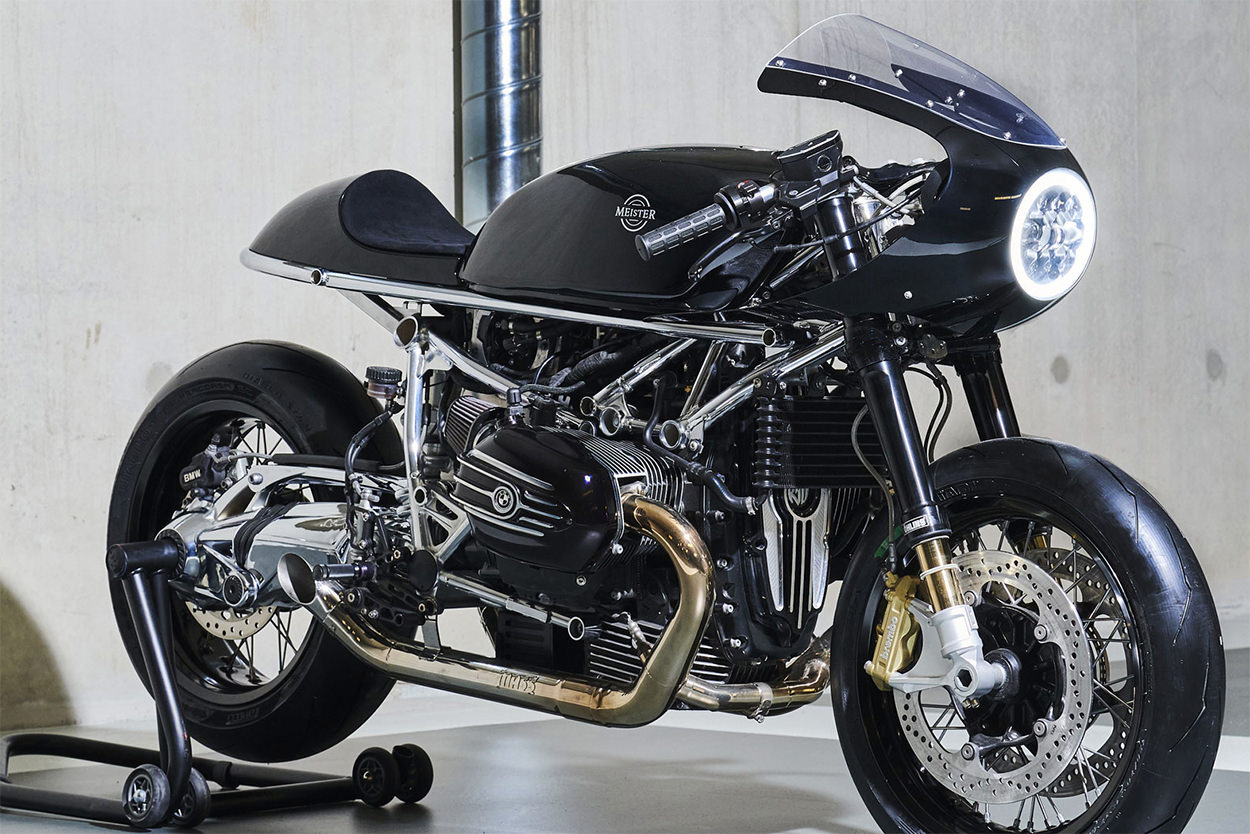 The engine has been treated to DNA filters and a Mass exhaust system, and the ECU has been reflashed to take advantage of this. Rear wheel horsepower is now 115, an increase of around 15%.

The R nineT was finished off with a smattering of Roland Sands hard parts, plus LED lighting all round. We reckon it’s the perfect mix of old and new—with the reassurance of knowing that it’ll start on the button every time. [Via] 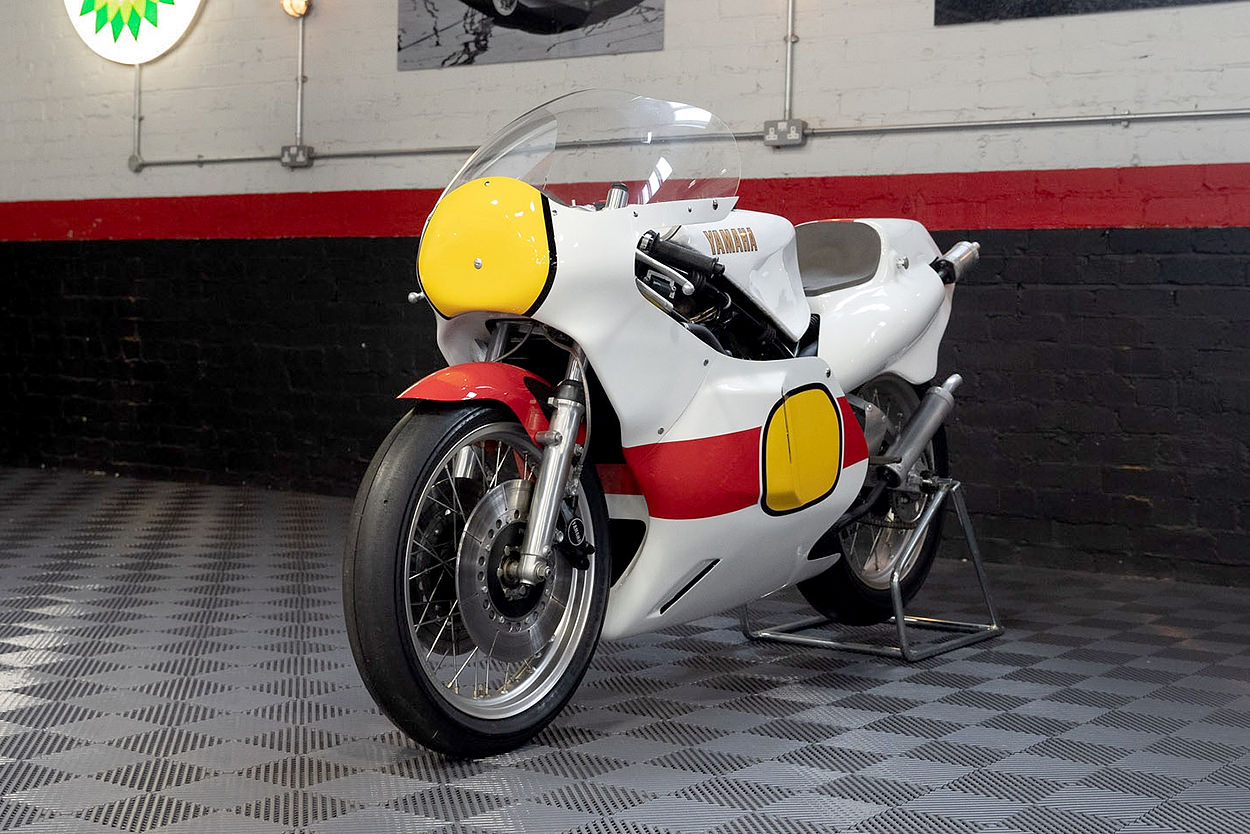 Zero-mile Yamaha TZ500 The website Collecting Cars has a reputation for big-dollar sales, but this particular auction mysteriously failed to sell.

We’re guessing the only reason could be a high reserve price, because the machine in question is stunning: an unused 1982 TZ500 GP racer in as-new condition. 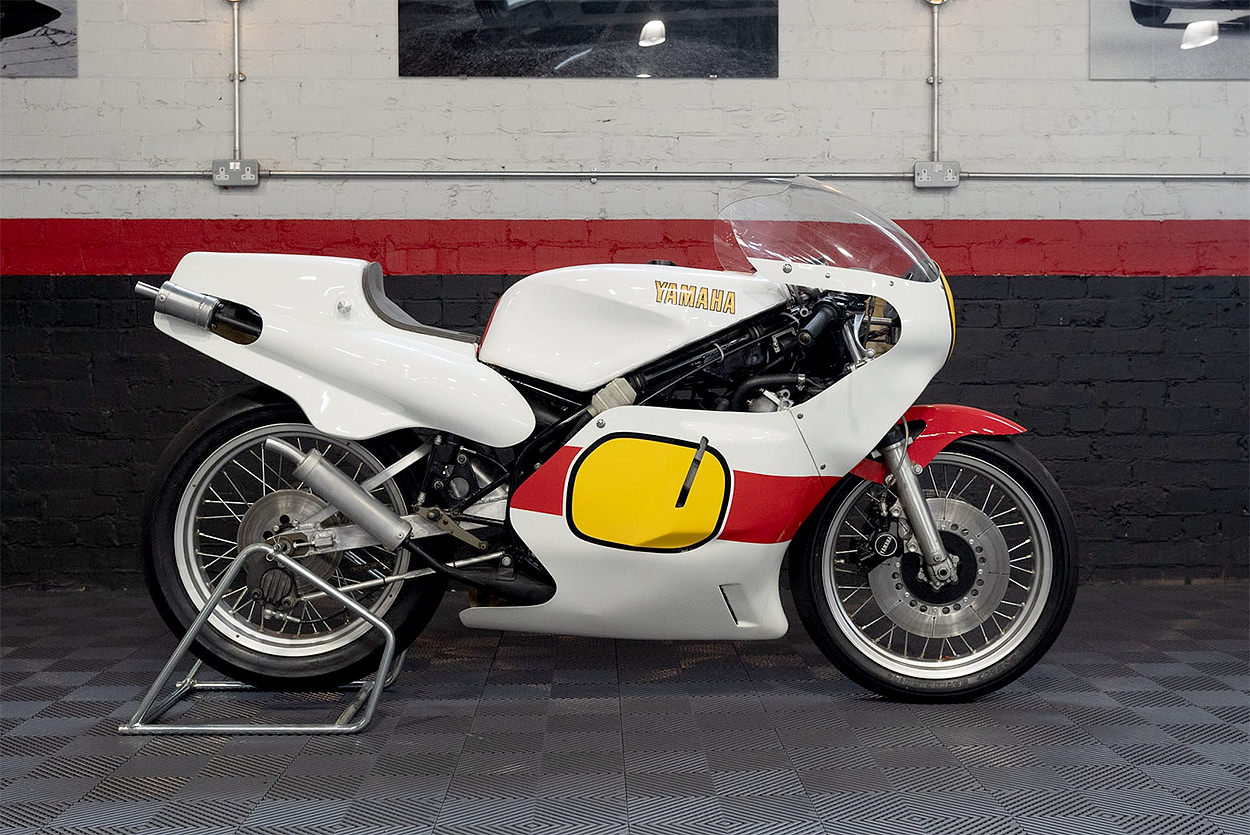 The specs for Yamaha’s famed pocket rocket speak for themselves: despite a capacity of only 500 cc, the two-stroke inline four pumps out a walloping 115 hp.

The TZ500 was based on the legendary YZR500, as raced by Kenny Roberts and his contemporaries. The TZ up for sale is a ‘J’ model, with cosmetic changes compared to earlier versions, and a slightly different engine spec. 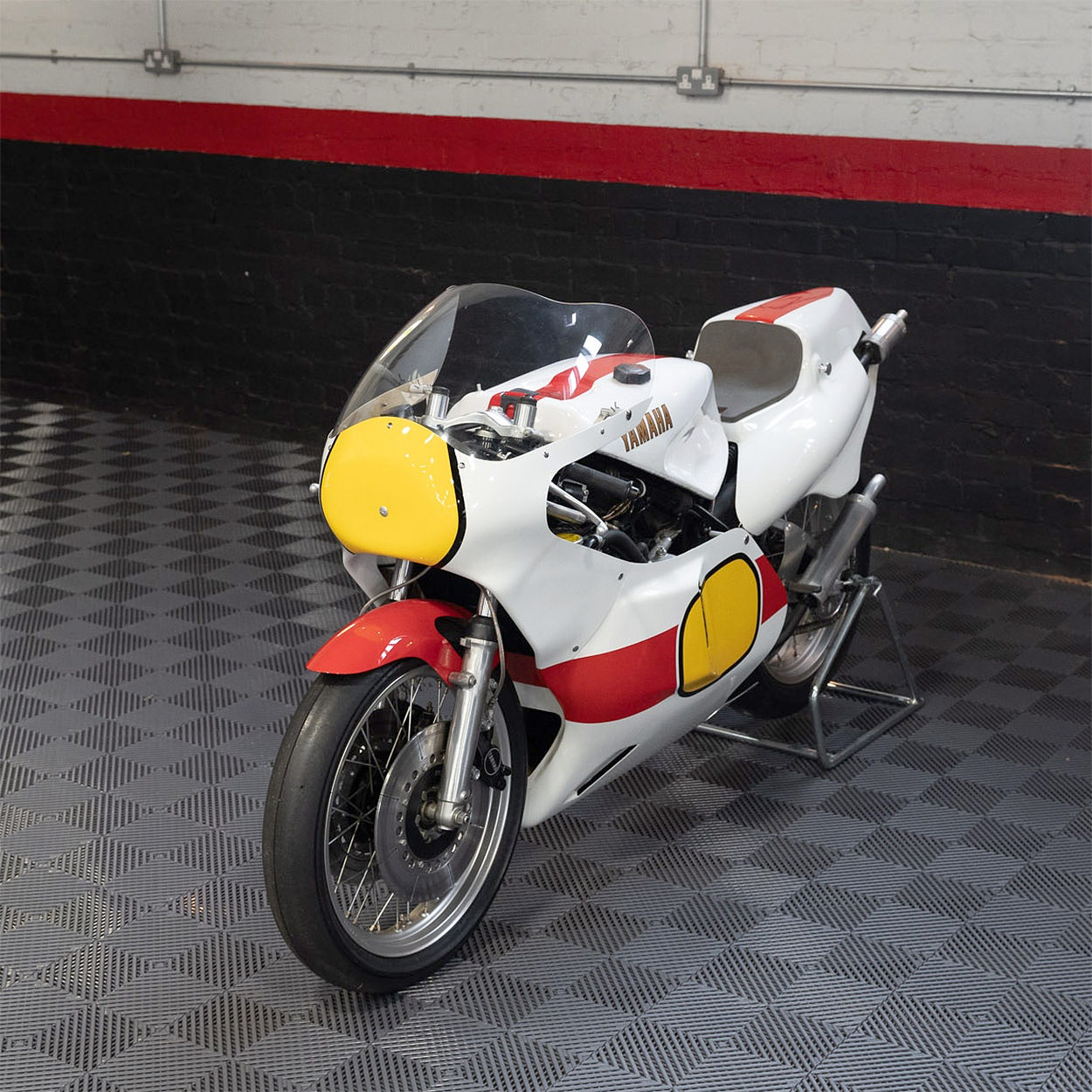 This bike has spent its life in dry-store collections, so it’s basically ready-to-race once the rubber seals have been checked and replaced. The only reported faults are a pair of very small bodywork cracks near the seat and rear fairing.

Although the auction has closed, it looks like the vendor is open to offers. The bike is currently in the Sheffield area, in the north of England, and well-endowed buyers should hit the ‘Still Interested?’ button on the sales page. [Via]

Triumph TE-1 Electric Prototype Seven months after Harley-Davidson delivered the LiveWire to showrooms, there are further signs of life in the electric space. Husqvarna is set to launch its E-Pilen later this year, and Triumph has just revealed this TE-1 electric sportbike concept. 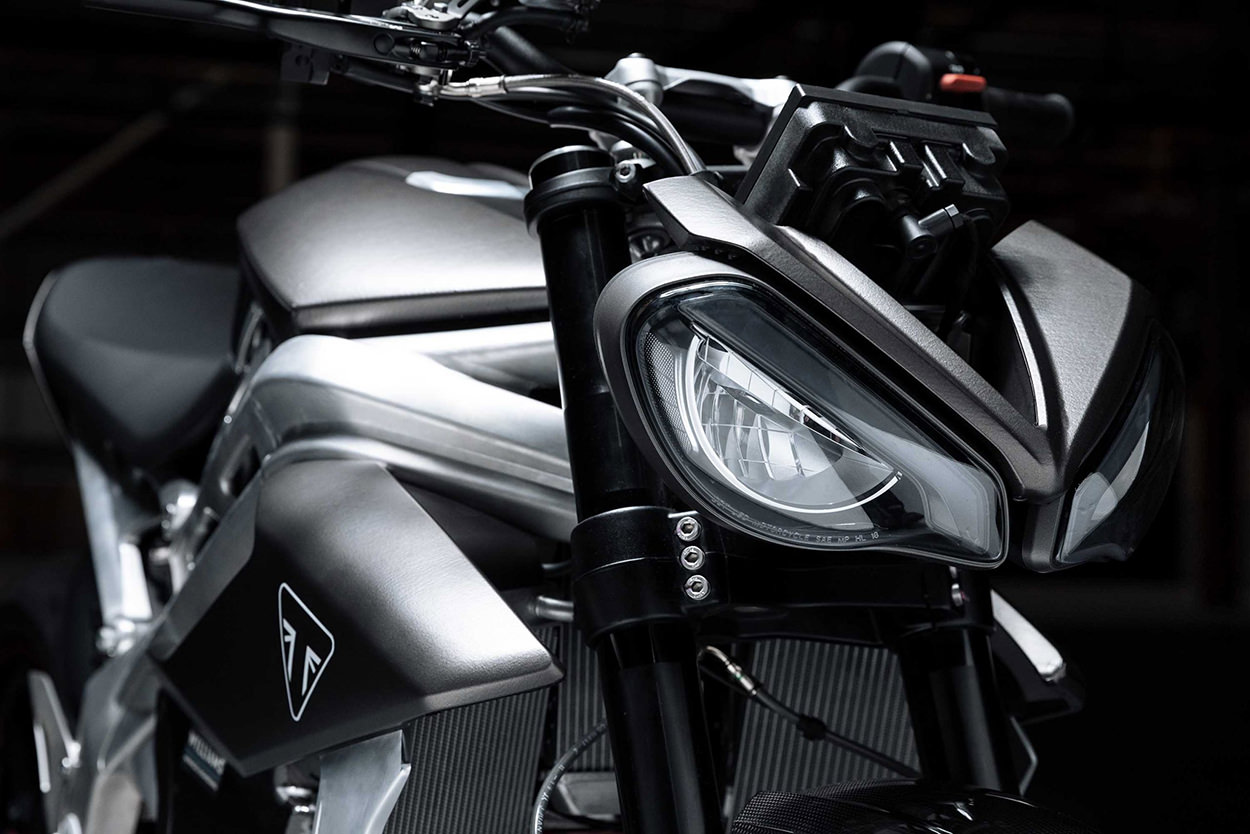 The first thing that struck us was the styling: it looks great. Perhaps a little ‘busy,’ but also fresh and modern, and clearly related to the current sporting Triple models. No doubt there will be some detail changes before we see a production bike, but the bones are good.

The project is a collaboration with several other British companies. Williams Advanced Engineering is looking after the battery side of things, and an outfit called Integral Powertrain is developing the motor and inverter. The University of Warwick is providing simulation data to ensure the bike performs as expected when it hits the road.

Triumph has not supplied many specifications for this belt-driven machine, except to say that the continuous power maximum is 90 kW (120 hp) and the peak is up to 130 kW (177 hp). The motor itself weighs around ten kilos, and the inverter can handle an impressive 500kW.

The next stage is six months of physical testing, on rolling roads and race tracks. If that all works out, productionization is presumably the next step. Triumph sounds pretty confident about the TE-1 and the project has government funding too, so we’re banking on it hitting showrooms in 2023. If the price is right, this one could bypass the early adopters and convert the naysayers. [Via]