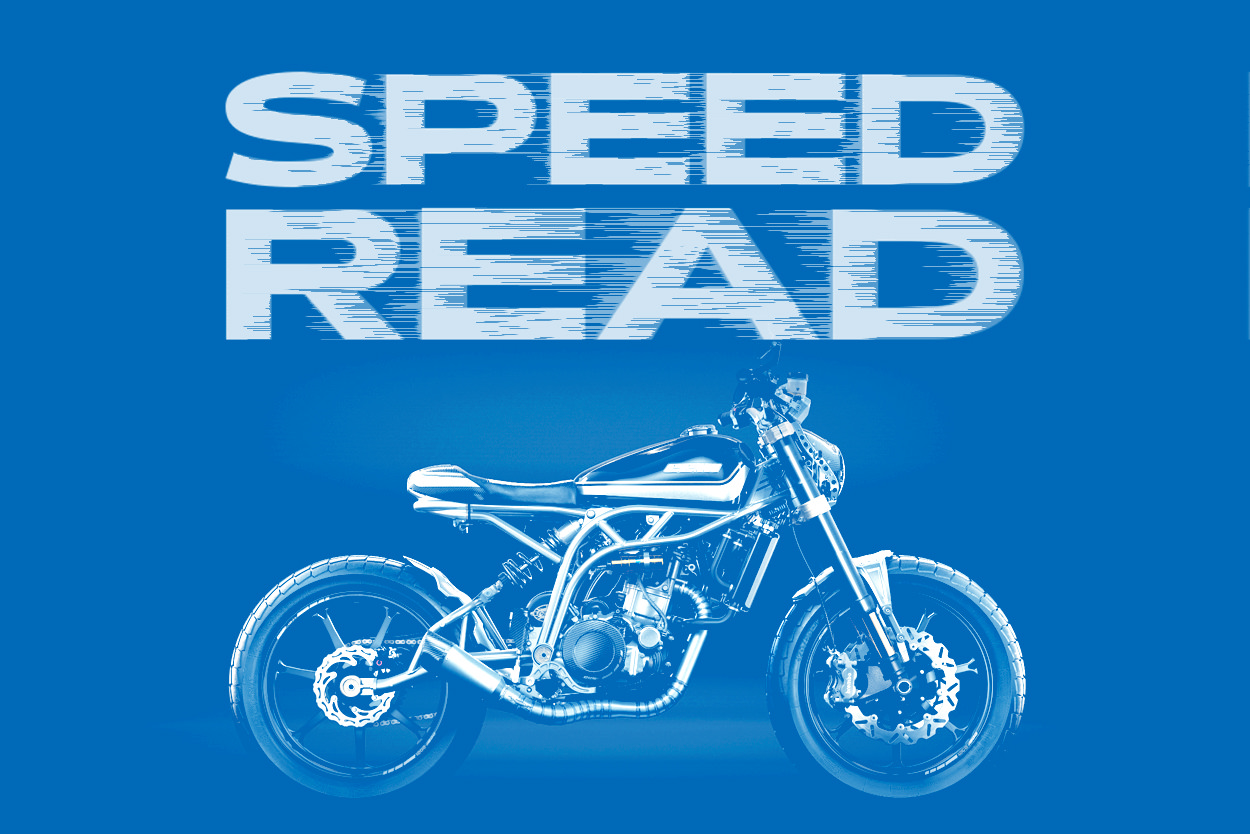 It’s all about the high end this week, with a titanium-framed beauty from CCM in the UK, a very rapid Ducati Monster from California, and an elegant Guzzi 850T from Austria. Plus a cutting-edge electric startup from Canada. Quality ain’t cheap. 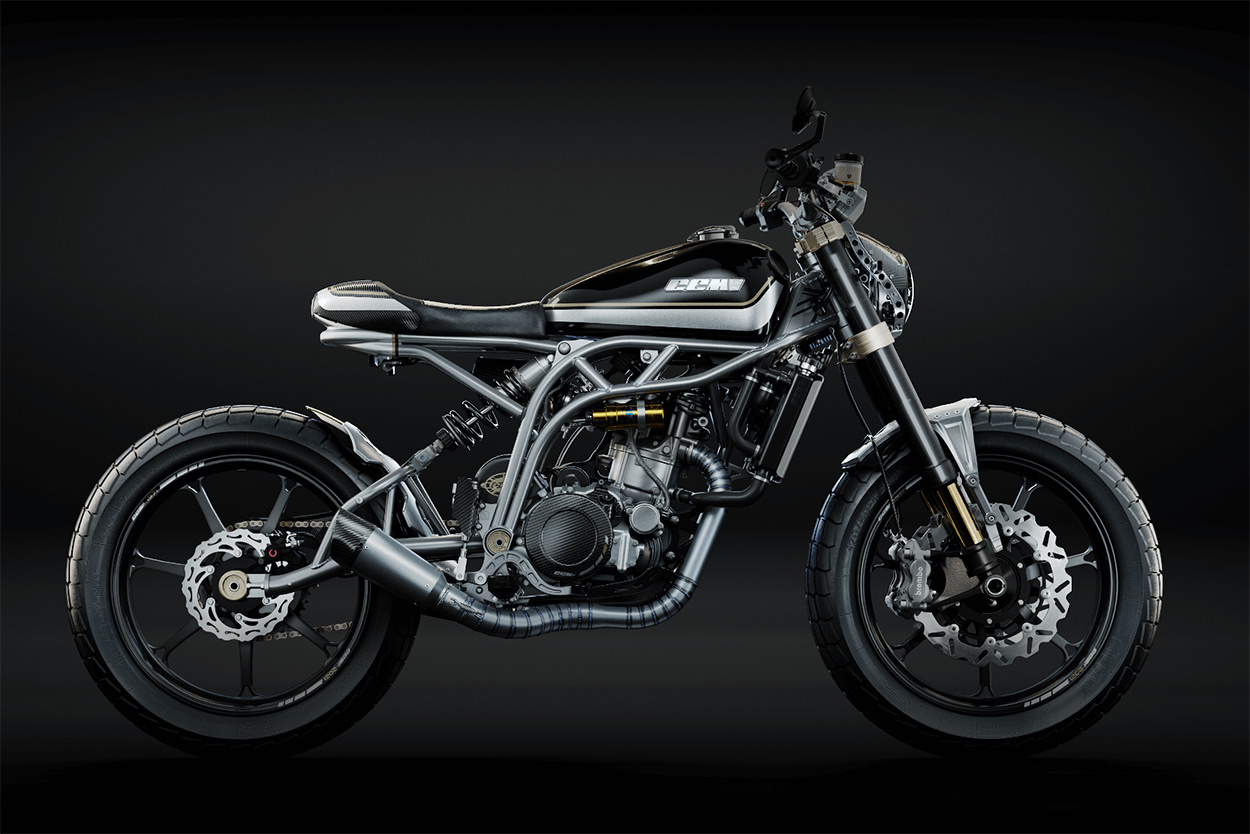 CCM Heritage ‘71 Ti limited edition The world is a tough place for small motorcycle manufacturers, but CCM has endured. The English company hit its 50th anniversary last year, and to celebrate, they’ve released a ‘Heritage’ edition of their perky 600cc Spitfire single.

Just 71 examples of this edition will be built, with pricing and exact specifications yet to be formally released. But from the information we have to hand, it’s all looking very good. 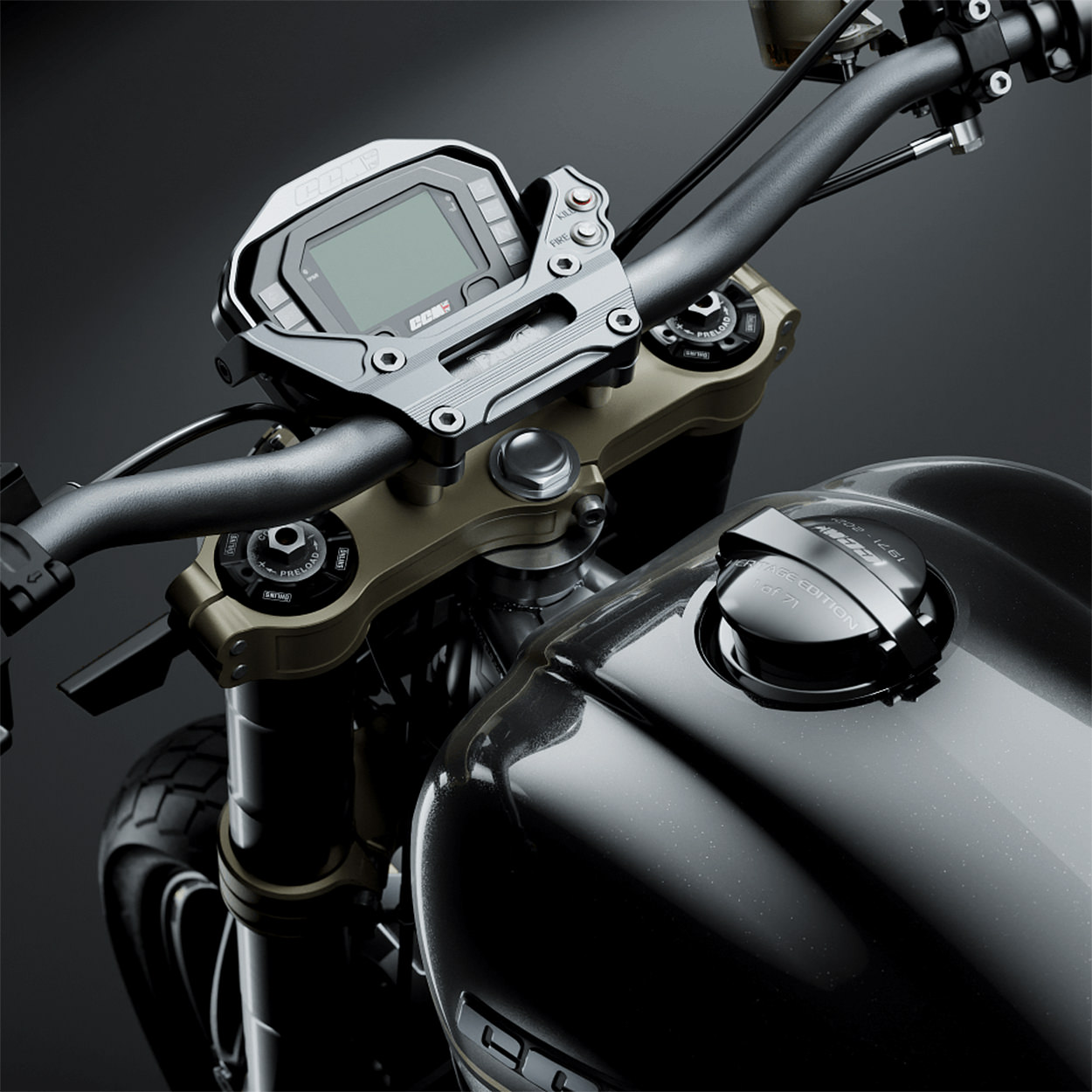 The trellis frame of the CCM Heritage is crafted from lightweight, aerospace grade titanium. The eye-catching exhaust is titanium too, pieced together from 64 individually welded sections, and seven-spoke Dymag race wheels offer further weight savings.

Titanium is also used for sundries such as bolts and footpegs, but the seat pan has been machined from a solid block of billet aluminum. The solo seat is crafted from beluga leather. 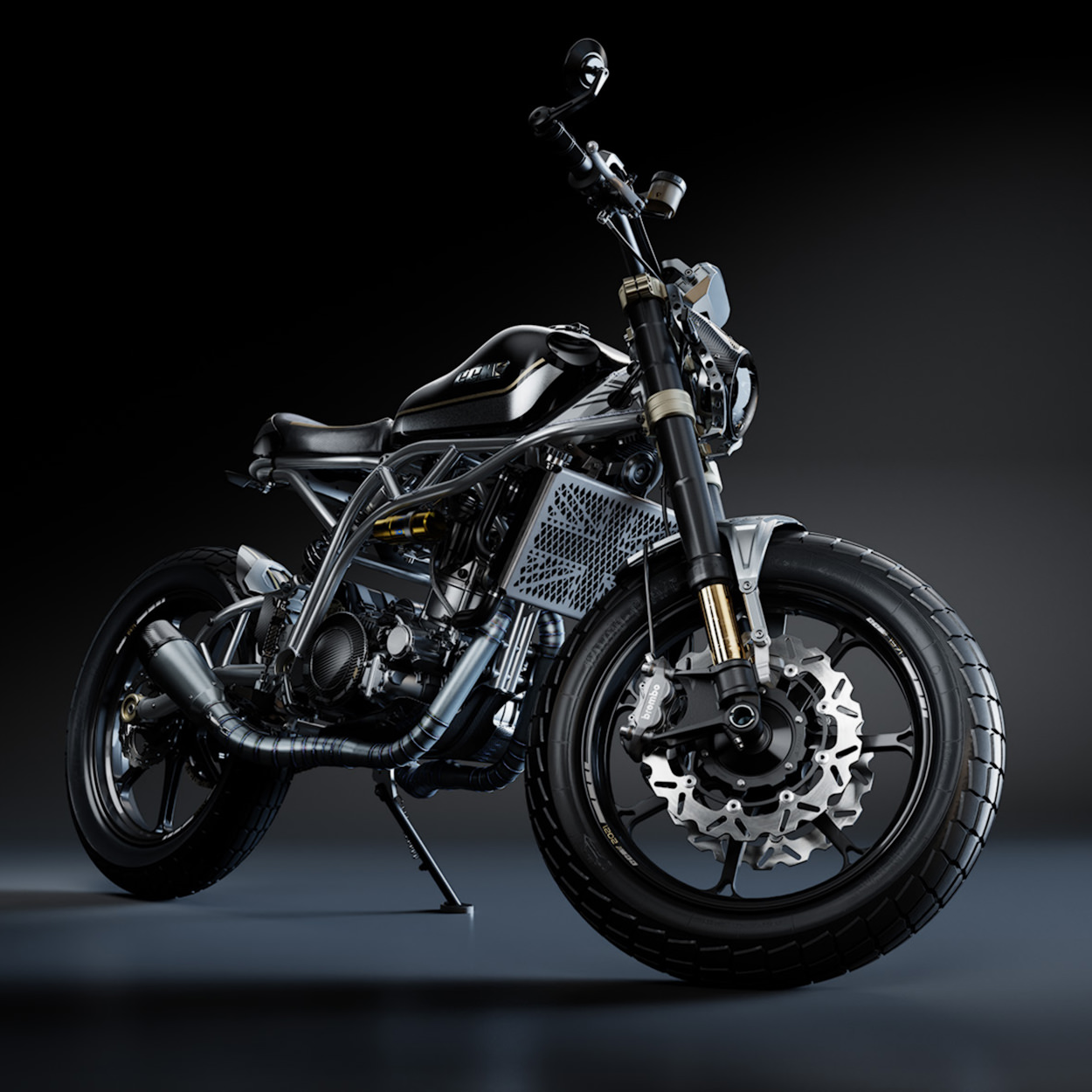 There’s high-tech in the adaptive cornering LED headlight, but the rest of the componentry comes from the traditional big names of the moto industry: Öhlins, Brembo and Rizoma.

Wet weight is a mere 136 kilos—300 pounds—so the Heritage ’71 should be an absolute blast to ride. If you want to pop one in your garage, register your interest here. 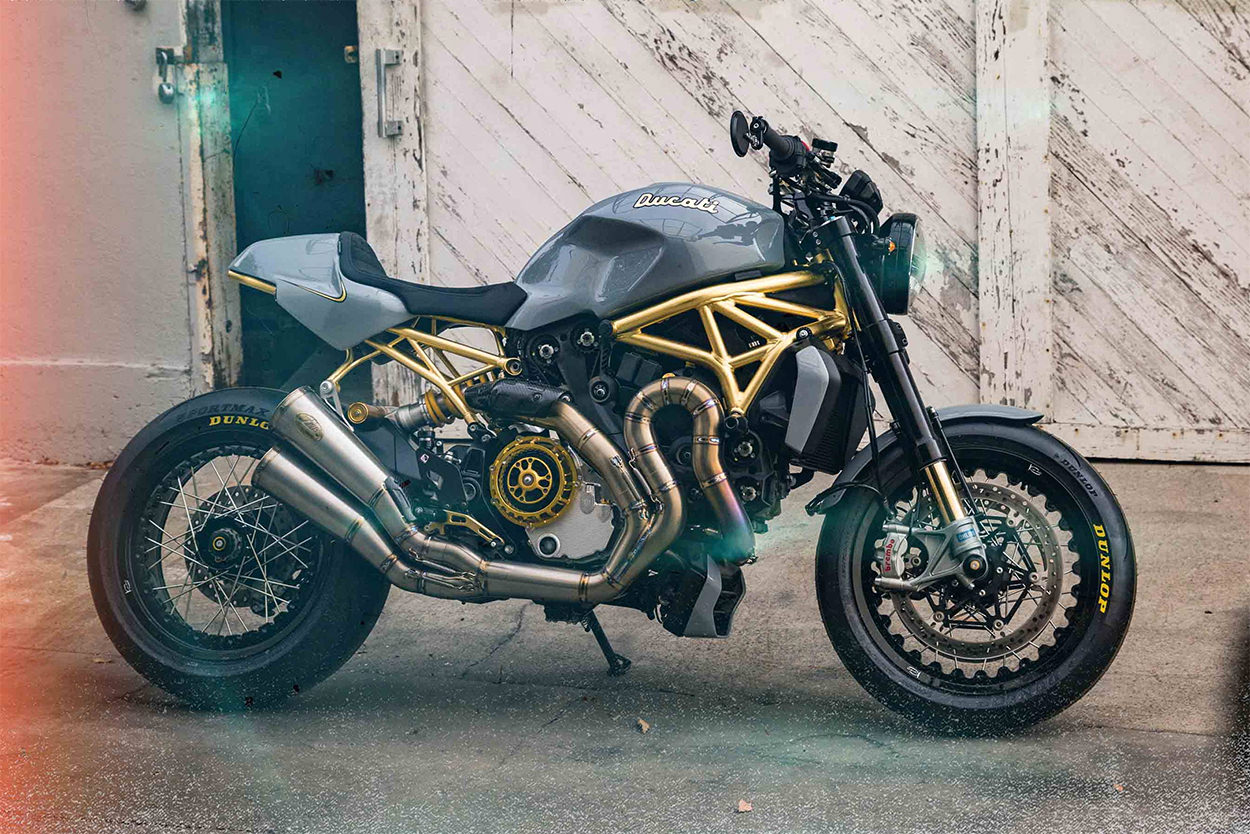 Ducati Monster 1200 S by Roland Sands The Monster has been customized in every shape and form since it rolled into showrooms in 1993, from mild to wild. This new custom from Roland Sands Design in California is visually on the mild side, but it’ll be a wild ride. 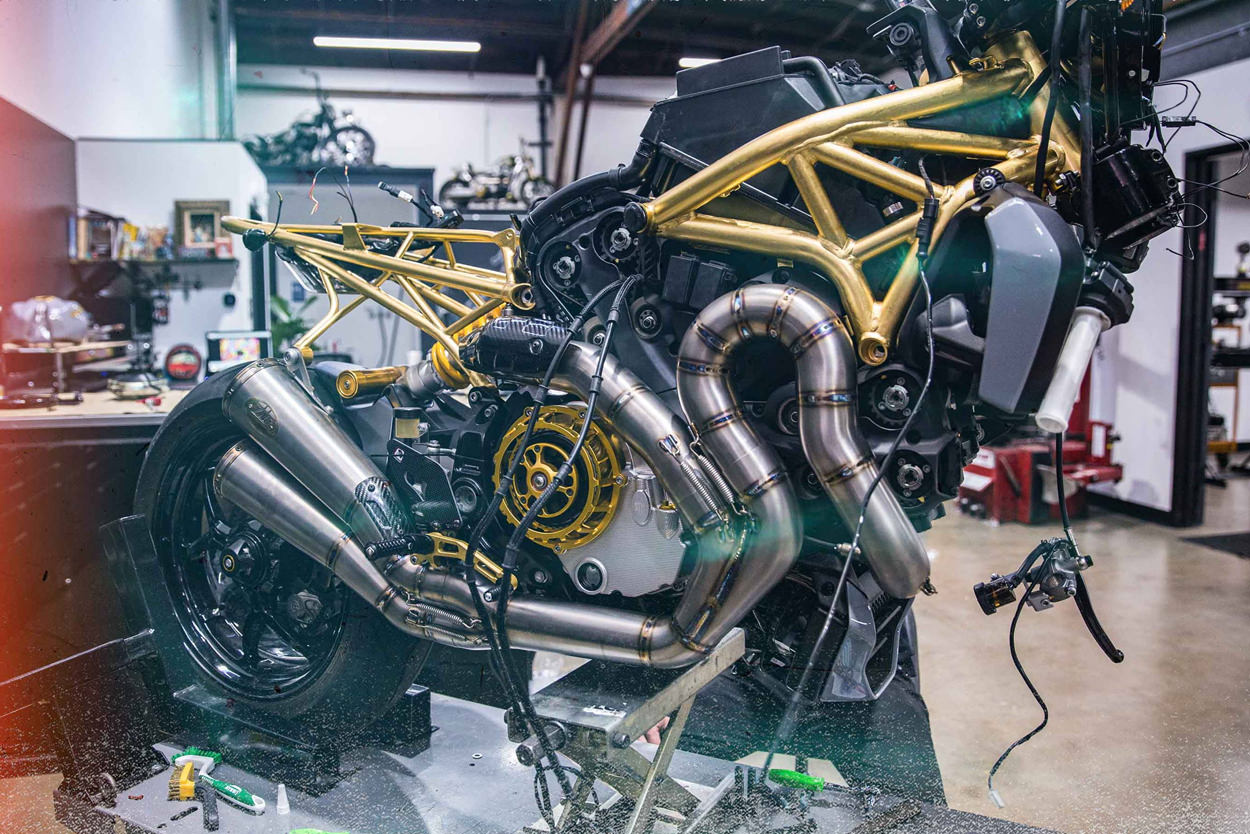 “The owner didn’t want to lose any of the stock bike’s function, but wanted to upgrade parts, lose a little weight and do a bit of a classic rewind with a standard round headlight conversion and tracker inspired tail,” say RSD. “Call it a classic canyon-carver custom.”

RSD replaced the stock subframe with a handbuilt chromoly steel trellis and new aluminum tail section. The fuel tank was adjusted to align correctly, a new custom seat from Saddlemen was installed, and the electronics are repositioned to show off the Öhlins monoshock. 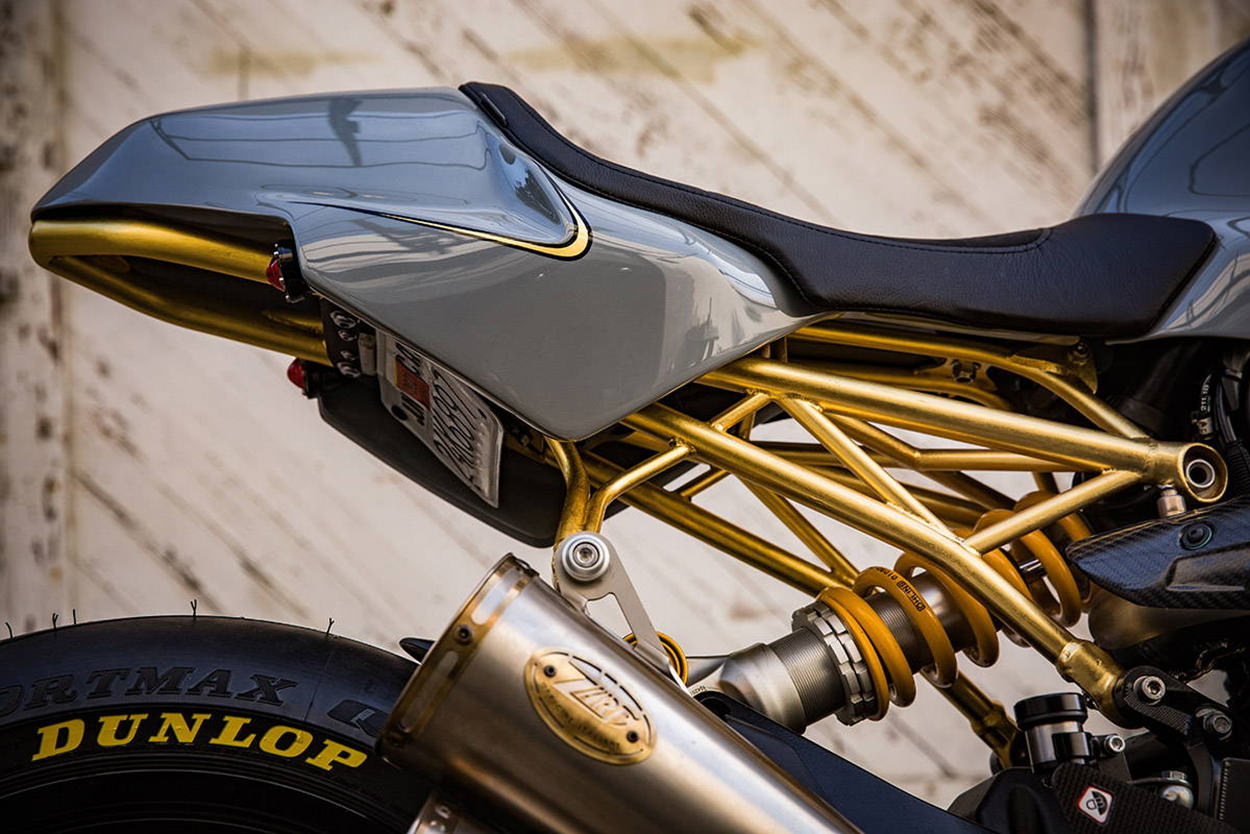 At the front, a Royal Enfield GT650 fender adds a retro touch, below a round Ducati Sport Classic headlight and RSD turn signals. The forks are now anodized black, upgraded with a GP Suspension cartridge kit, and mounted using a CNC Racing billet triple clamp. 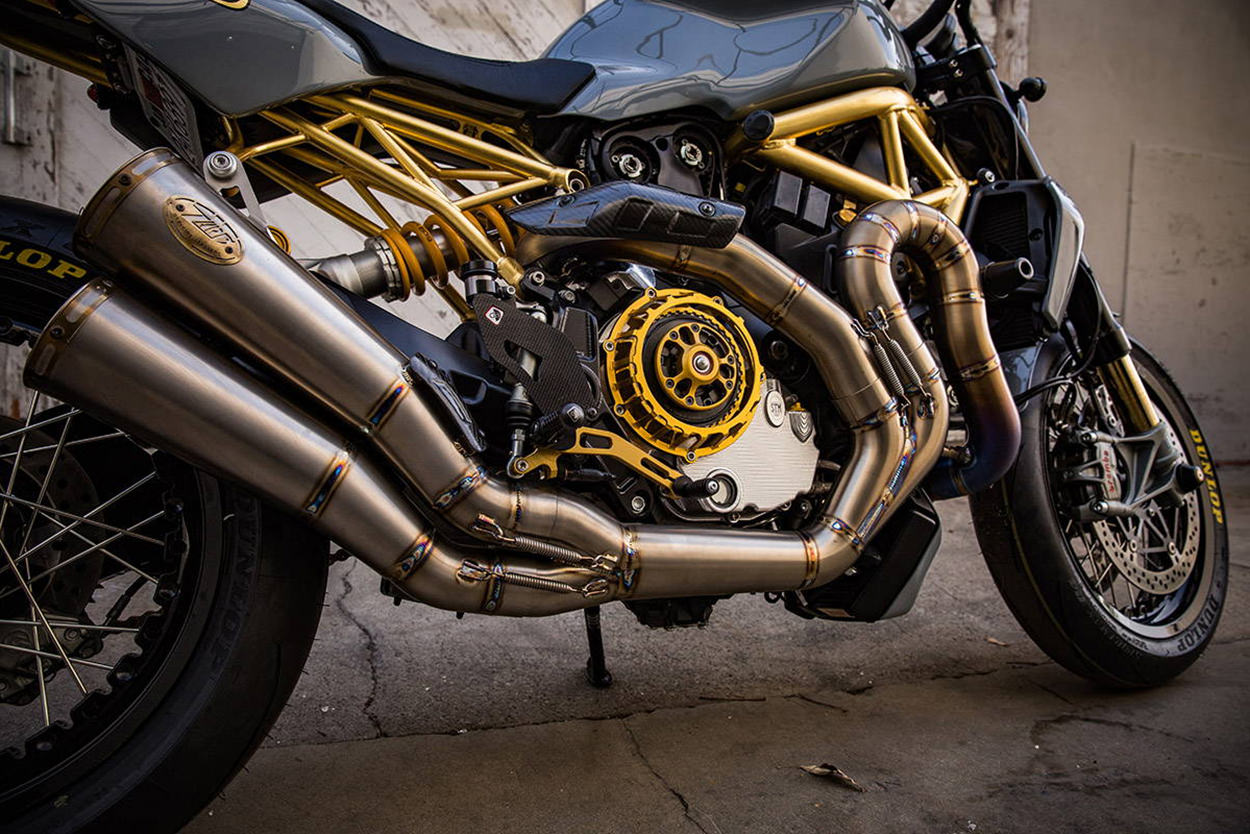 To boost performance a little, RSD commissioned Zard to fabricate a custom titanium 2-1-2 exhaust system and ship it over from Italy. The ECU was reflashed by Boulder Motorsports, and a dry clutch conversion adds the signature Ducati rattle. 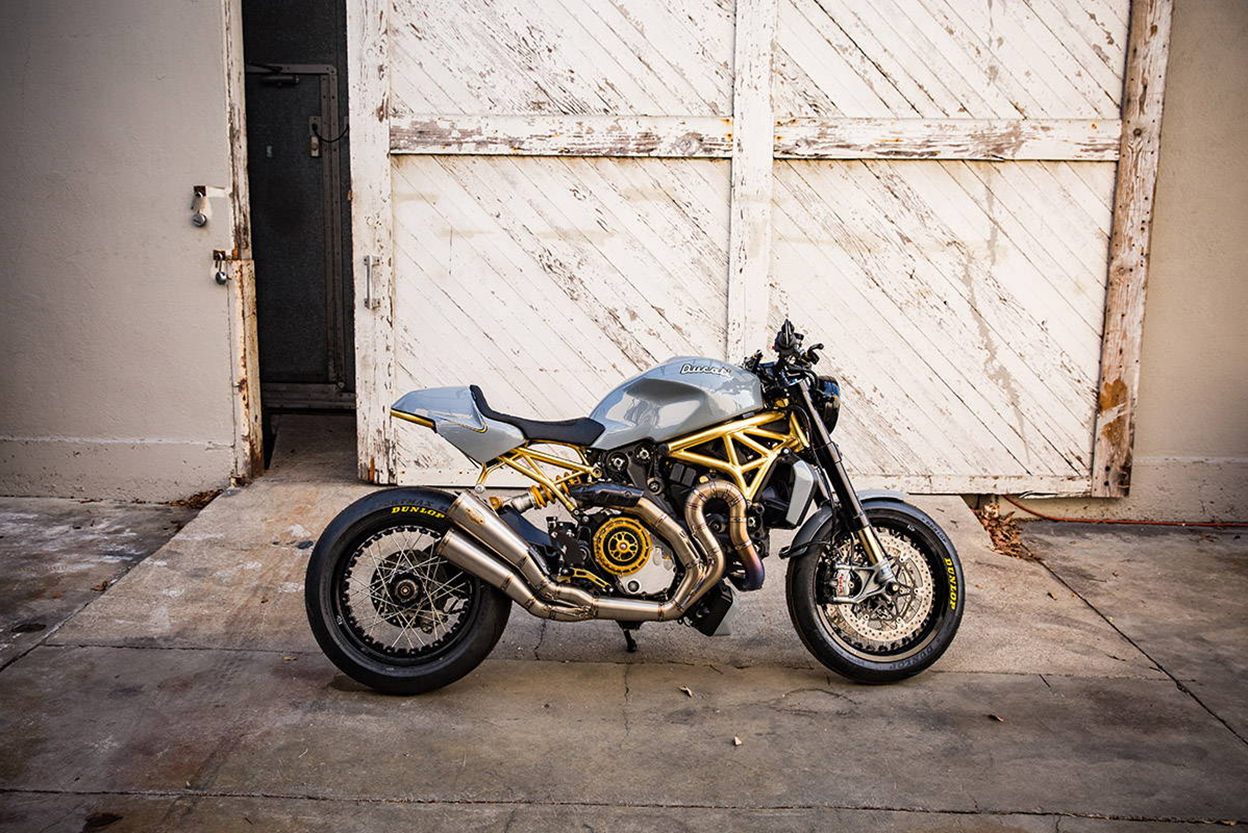 The anodizing throughout the bike is particularly trick. RSD stripped off all the factory red anodizing, then re-dipped the parts (and some custom ones too) in a bath of gold. Then Chris Wood at Air Trix added 100% gold leaf to the frame, and the bodywork was finished in a low-key battleship grey.

It’s just the right side of ‘bling’—we think. [More] 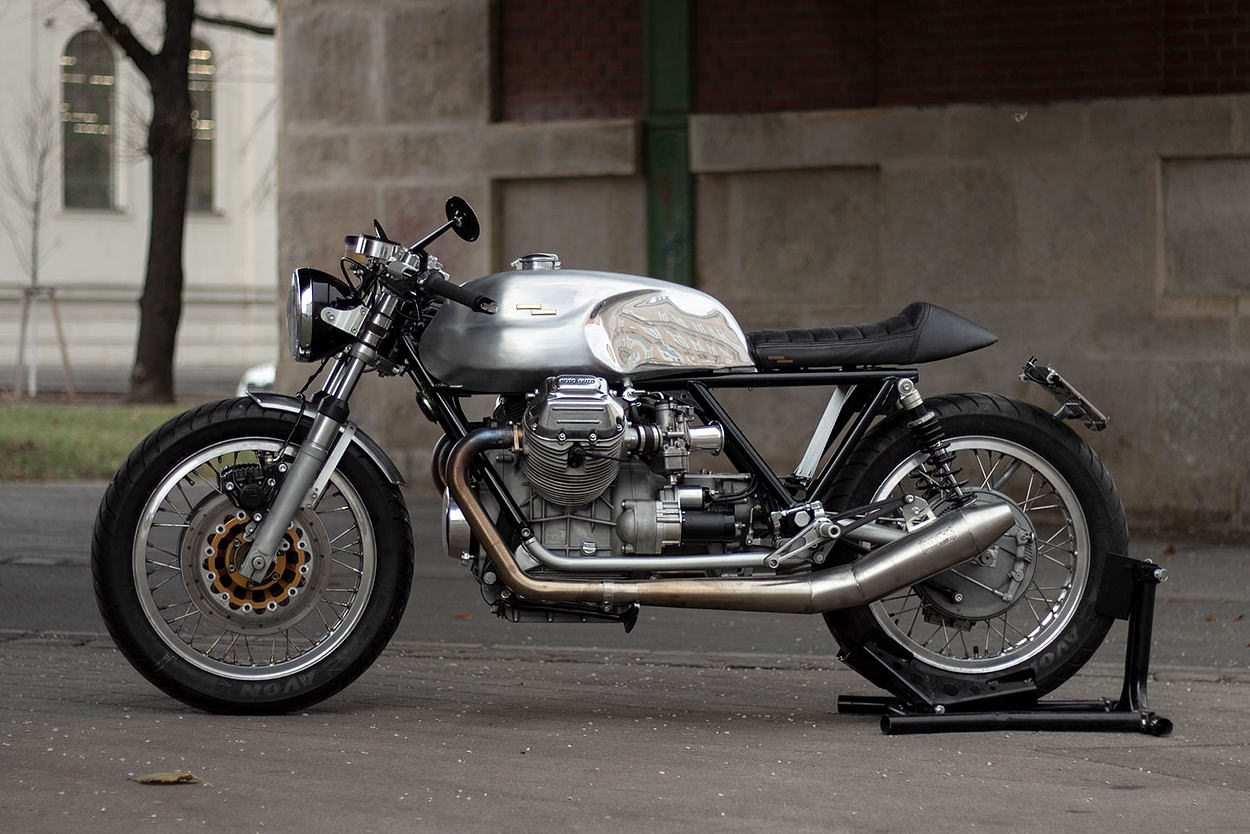 Moto Guzzi 850T by Horizontal Moto Mandello-built bikes from the 1970s have an enduring style that has never waned over the decades. In Europe, there’s a veritable cottage industry focused on classic Guzzi café racers because even the most plastic-laden bikes end up looking good once they’re stripped back to the essentials. 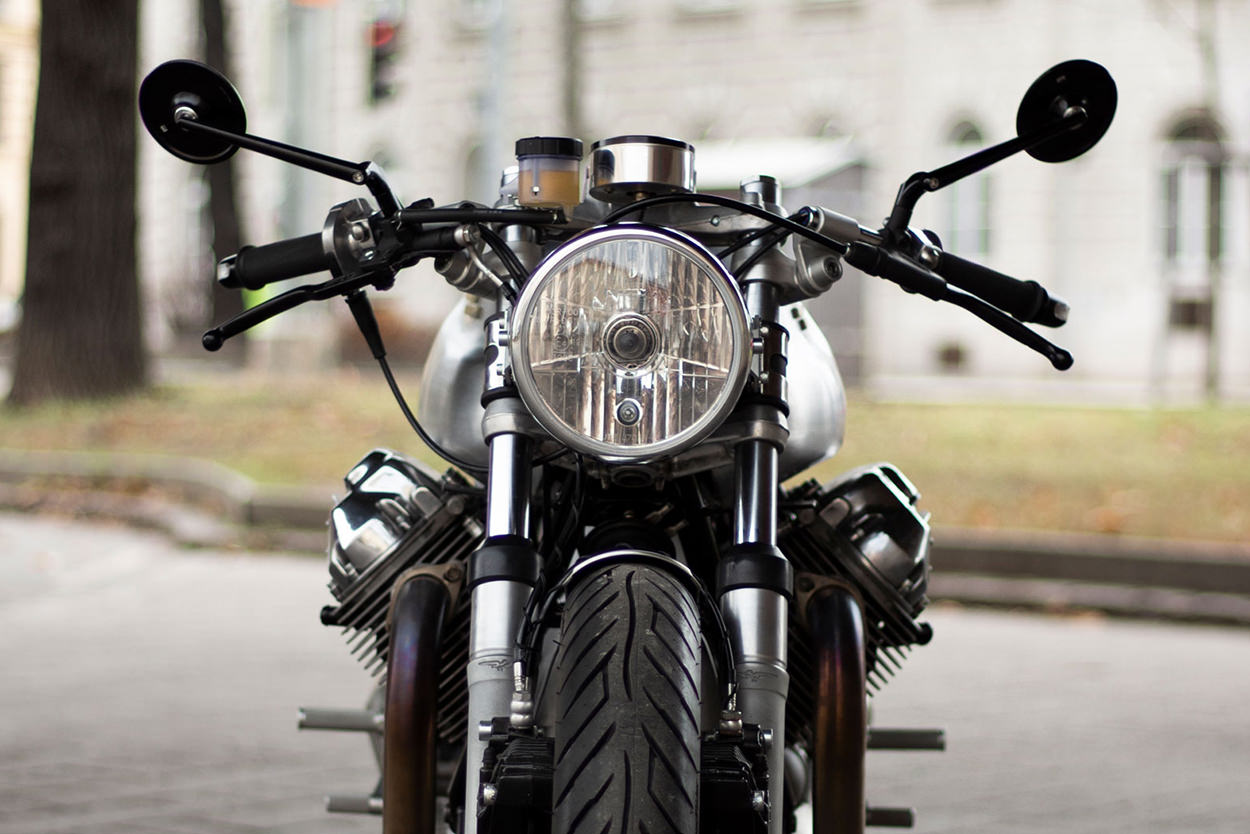 This very clean machine is based on the 1972 850T and comes from Austrian Paul Führmann, who runs Horizontal Moto in Vienna. Paul focused first on the sweet-handling Tonti chassis, cleaning it up and detabbing it before trimming down the subframe and refinishing all the tubing in a glossy black.

The stunning aluminum fuel tank comes from the UK-based specialists Tab Classics, and right behind is a gorgeous new seat unit from the Austrian artisans at Ledernardo. 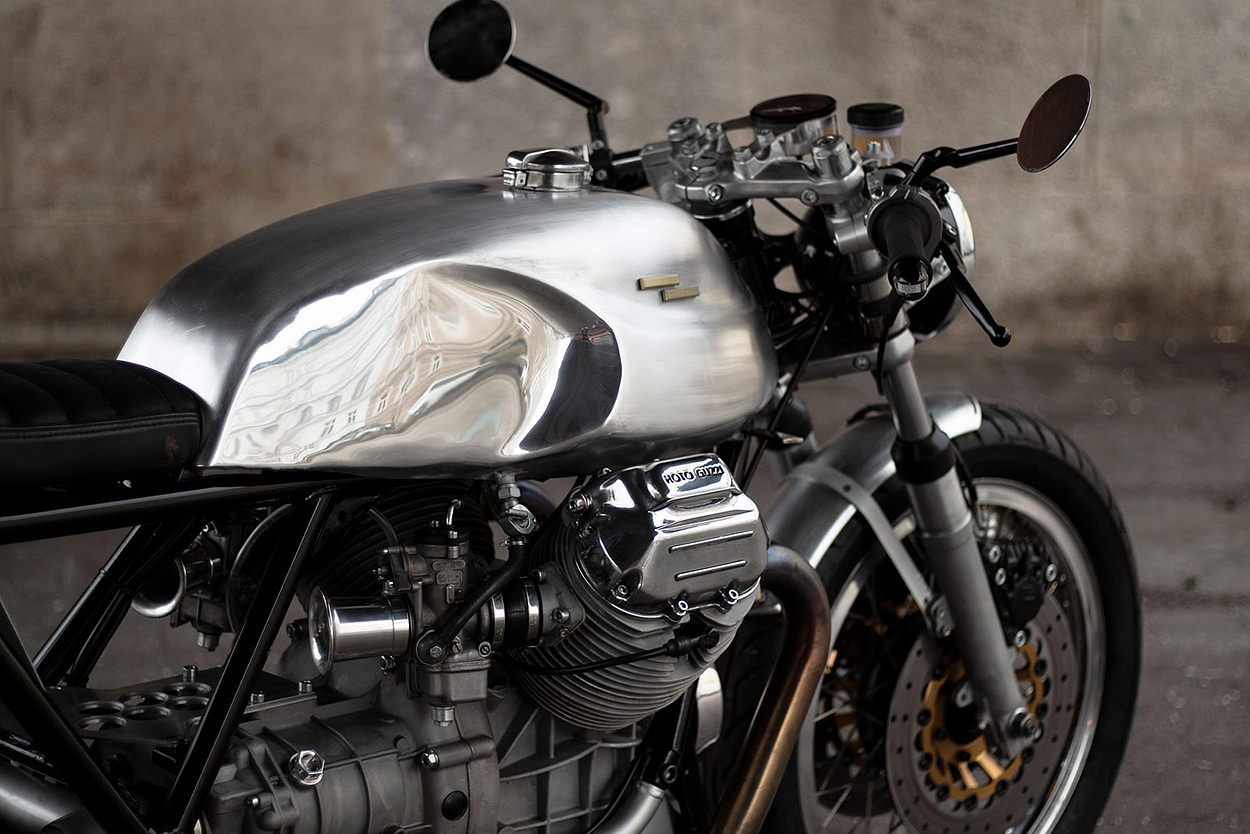 The 844cc V-twin got a full overhaul too, plus extra power via new Dell’Orto PHF36 carbs and a custom-built exhaust from MASS. Electronic ignition smooths out the delivery, and there’s a useful weight reduction of around twenty kilos—down to 190 kg.

Horizontal Moto have finished off the 850T with new fork internals and a Spiegler/Brembo front brake setup—so it’s the looks that are classic, not the riding experience. We’d put this one in the EXIF garage any day. [Via] 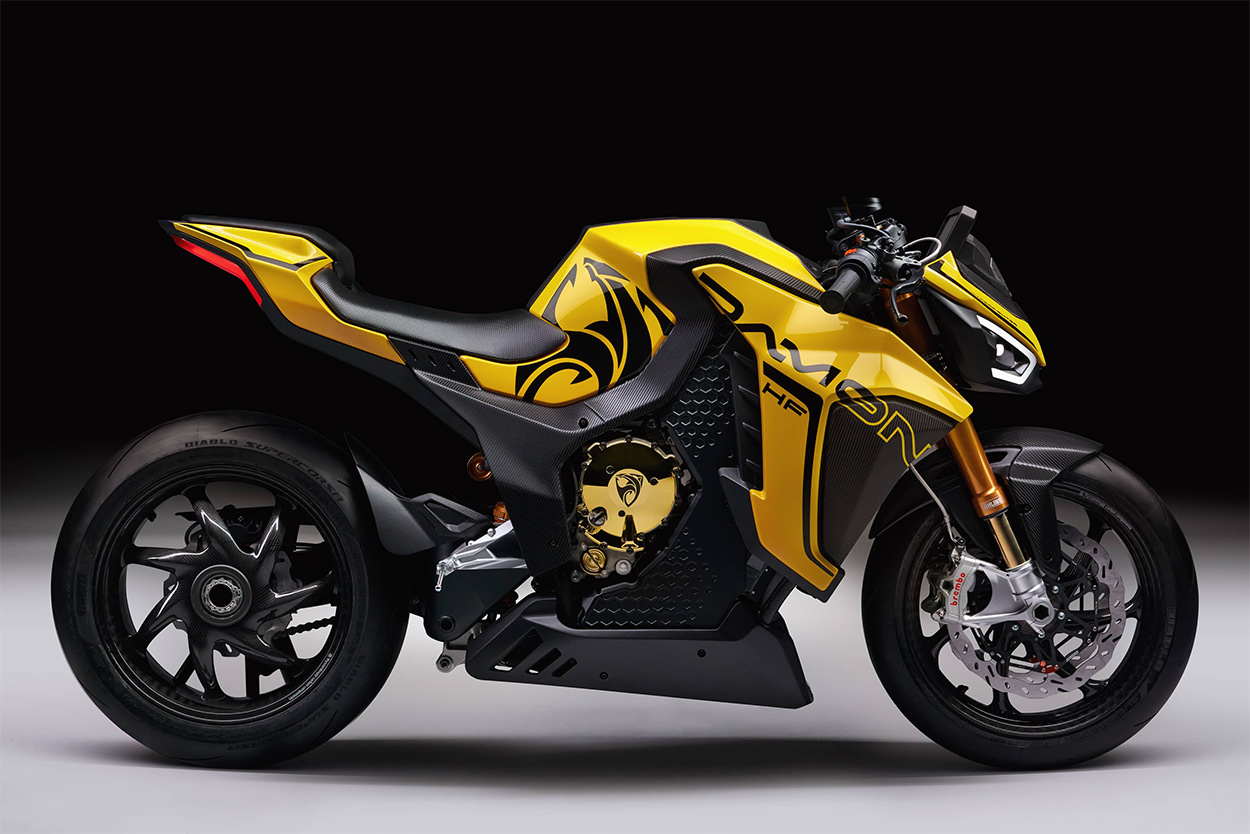 The Damon HyperFighter Yesterday, we dissected the state of the electric motorcycle market in our panel discussion with moto industry heavyweights. Today, we happened across a vision of the future—and very enticing it is, too.

Damon is a Canadian startup with an impressive roster of employees, including the former head tech guy at Alta. The company has not only developed a 200 hp electric powertrain, but also a collision warning system and adjustable ergonomics. The idea is to make motorcycles both safer and smarter. 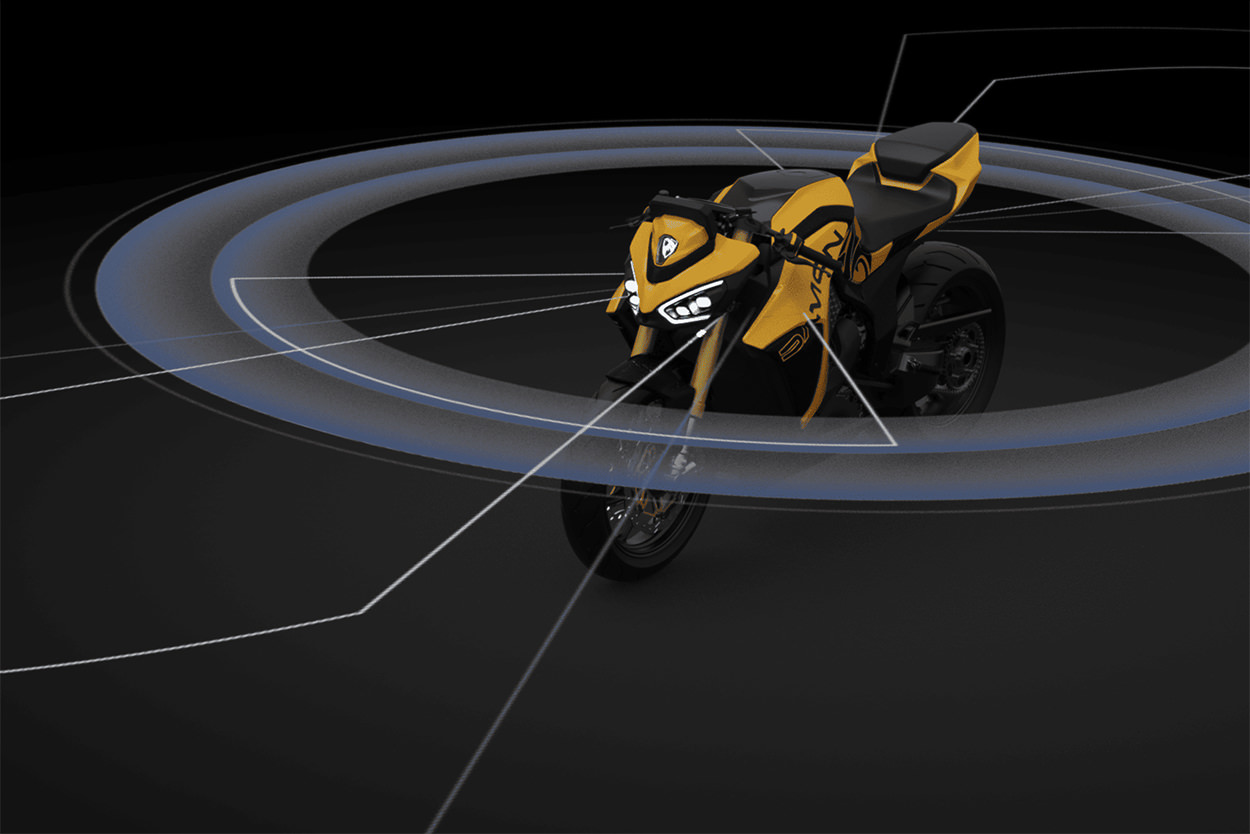 The Hypersport Pro prototype was revealed last year; an interesting if slightly bland-looking showcase for Damon’s tech innovations. The company has now released details of the unfaired HyperFighter shown here, which comes with a $35,000 MSRP.

It uses a monocoque chassis that holds not only the batteries, but also the motor and electronics. The specs are impressive, with the launch ‘Colossus’ edition boasting 200 hp, a range of over 140 miles, and a claimed top speed of 170 mph. 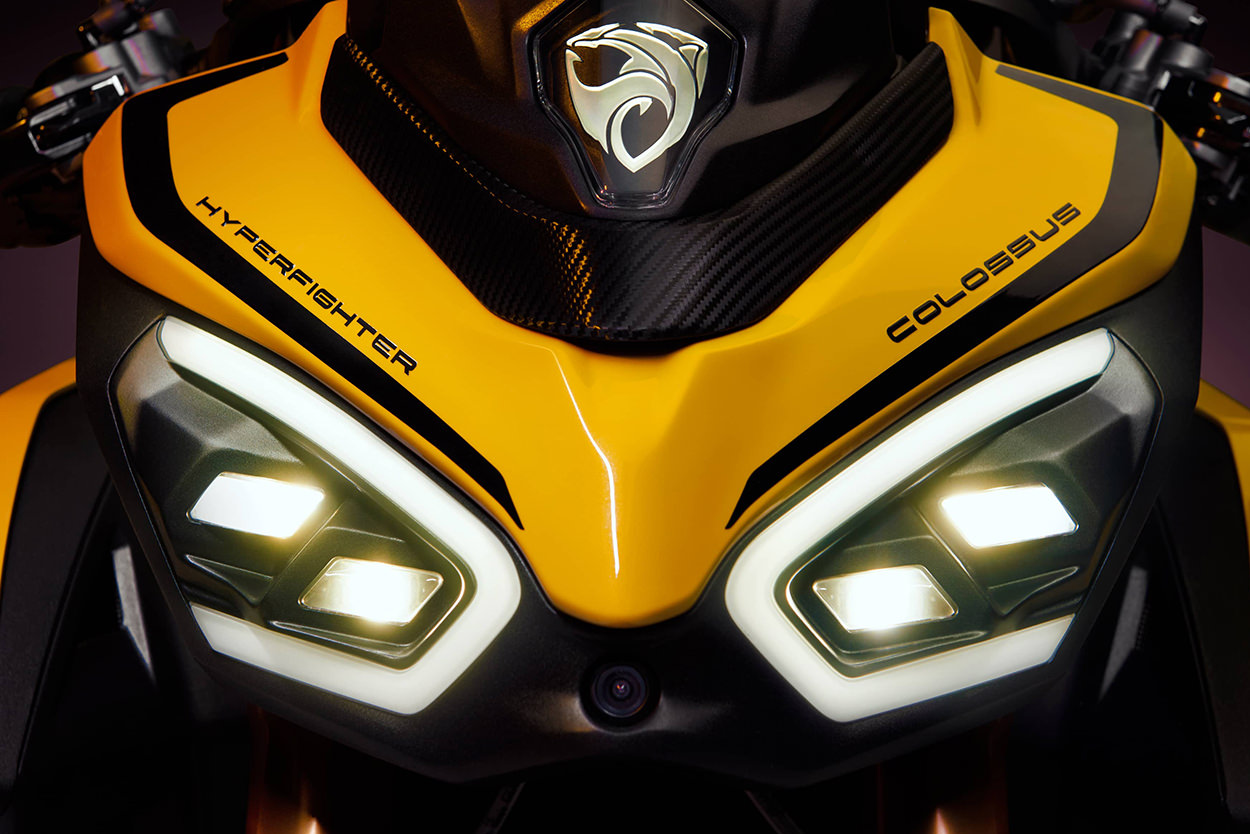 Lower priced models are planned, with less ballistic performance, but you can put down a deposit of $250 right now to secure one of the first 100 Colossus bikes.

There’s a temptation to dismiss projects like this as vaporware, but Damon has already raised over $60m in funding, including a substantial CA$37.9m stake from a venture capitalist focusing on electric vehicles. We have a feeling this one could take off. [Damon Motors] 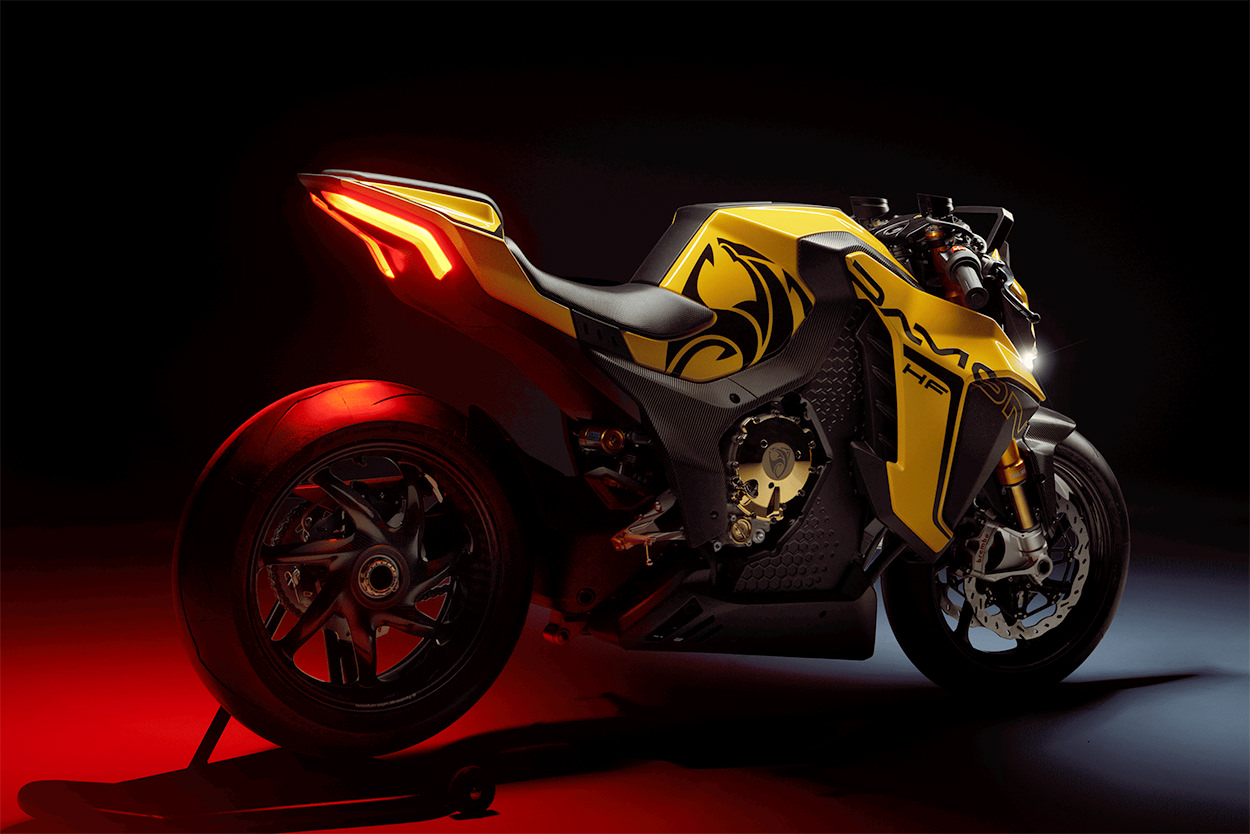