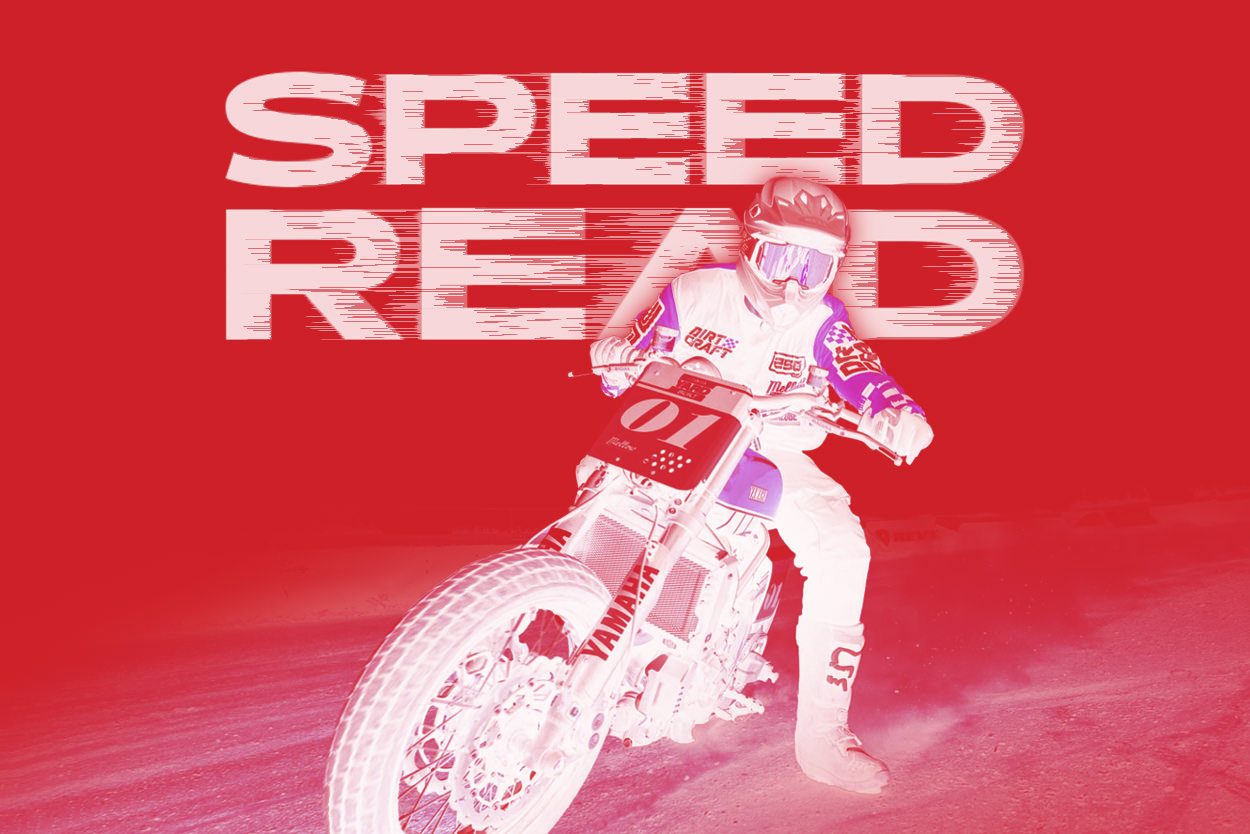 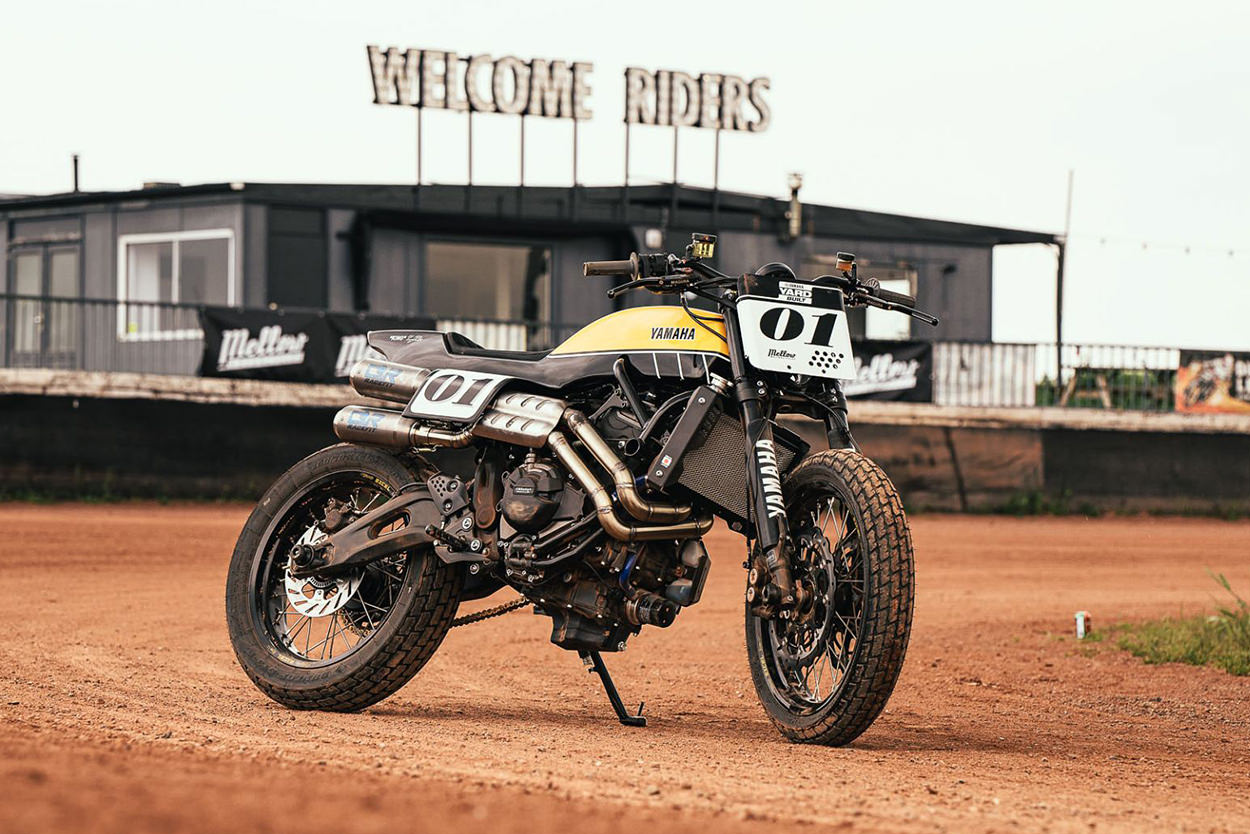 “There are not many things in the world I like more than King Kenny Roberts and the ‘Speedblock’ design,” says Mellow Motorcycles’ Patrick Sauter. But this custom XSR, aptly dubbed ‘King Kenny,’ wears more than just a lick of yellow paint. 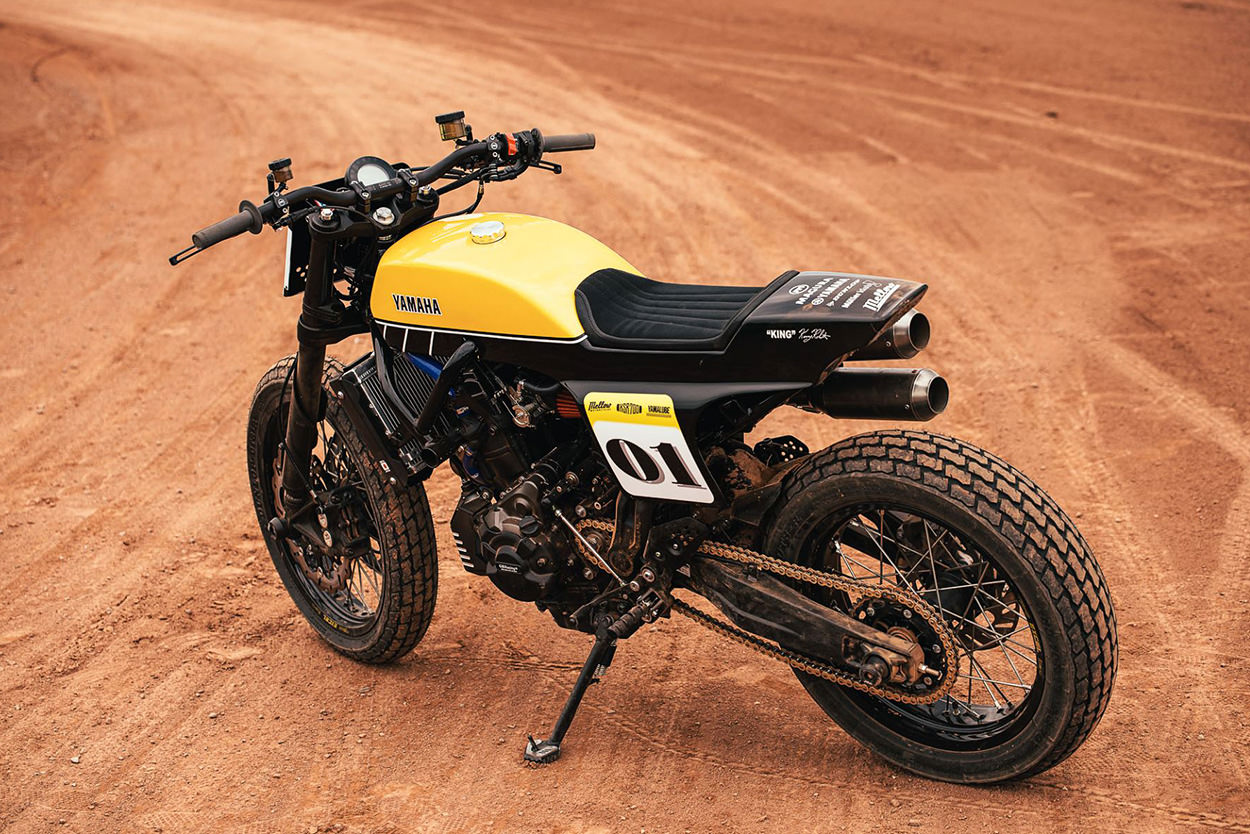 The German workshop went all out—redesigning the XSR’s bodywork and treating it a host of flat track-worthy upgrades. The new body kit consists of a one-piece tank cover and tail section, hand formed out of aluminum. There’s a 6.5 liter [1.7 gallon] reservoir hiding underneath, with the fuel pump squeezed in there too. 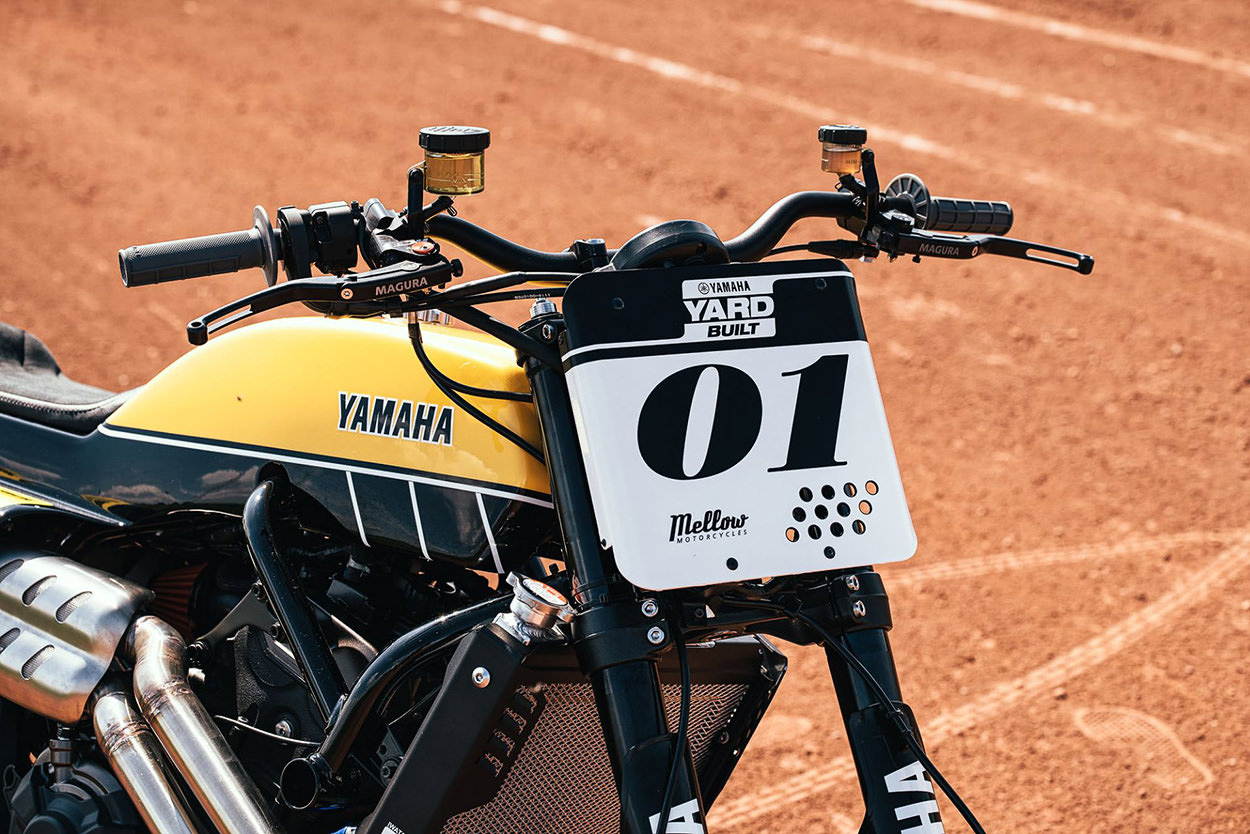 Mellow installed a set of lowered XSR900 forks up front, kitted with a pair of fork guards instead of a fender. The 19” Excel rims were laced up by HE-Motorradtechnik, and wear Dunlop’s perennial DT3 tires.

Up top are new flat track bars, equipped with Renthal grips and Magura controls. There are new foot pegs lower down, pod filters in place of the airbox, and an aluminum number board out front. 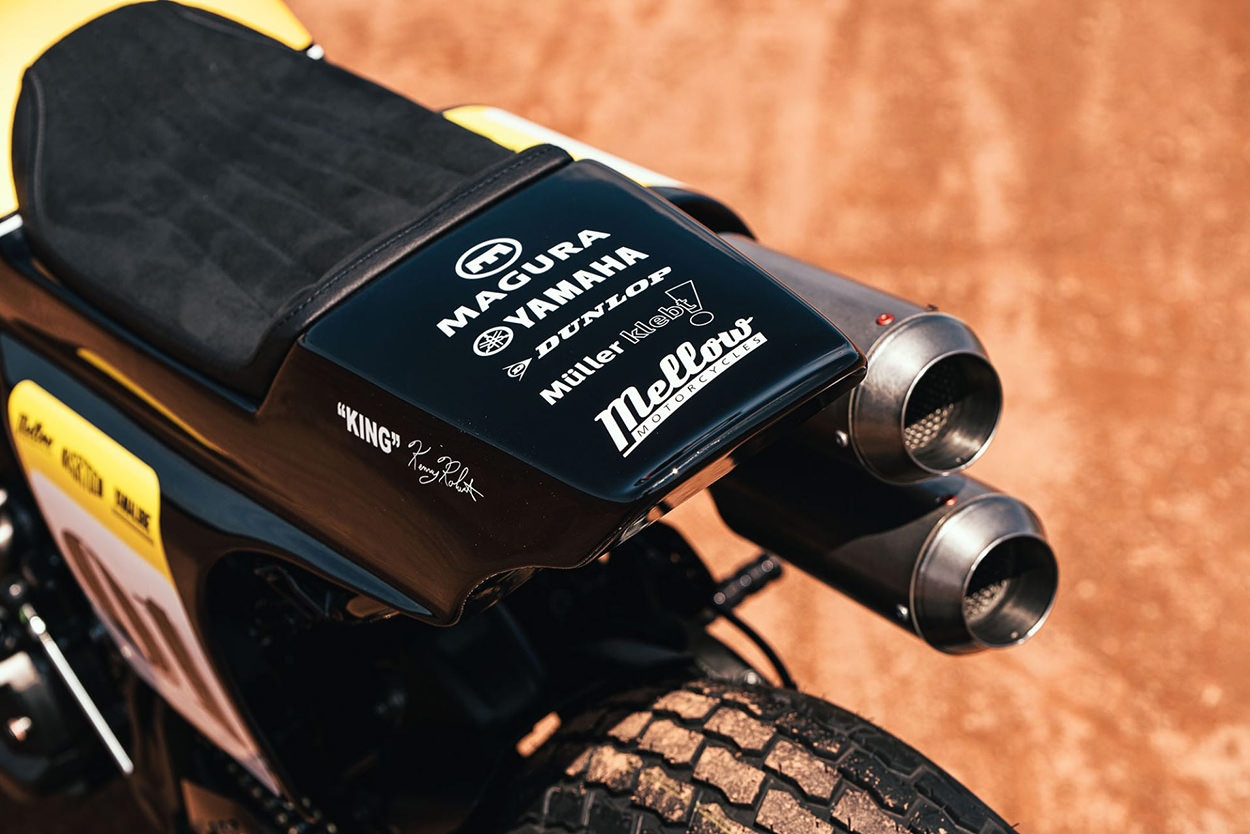 The high-riding twin pipes are from Racefit, and were specifically designed to play nice with the revised bodywork lines. Patrick affectionately refers to them as “rude, indecent and loud.”

Once the XSR was all buttoned up, the crew took it to the track to tune it for race conditions. “After a few laps you immediately feel safe on this bike,” says Patrick. 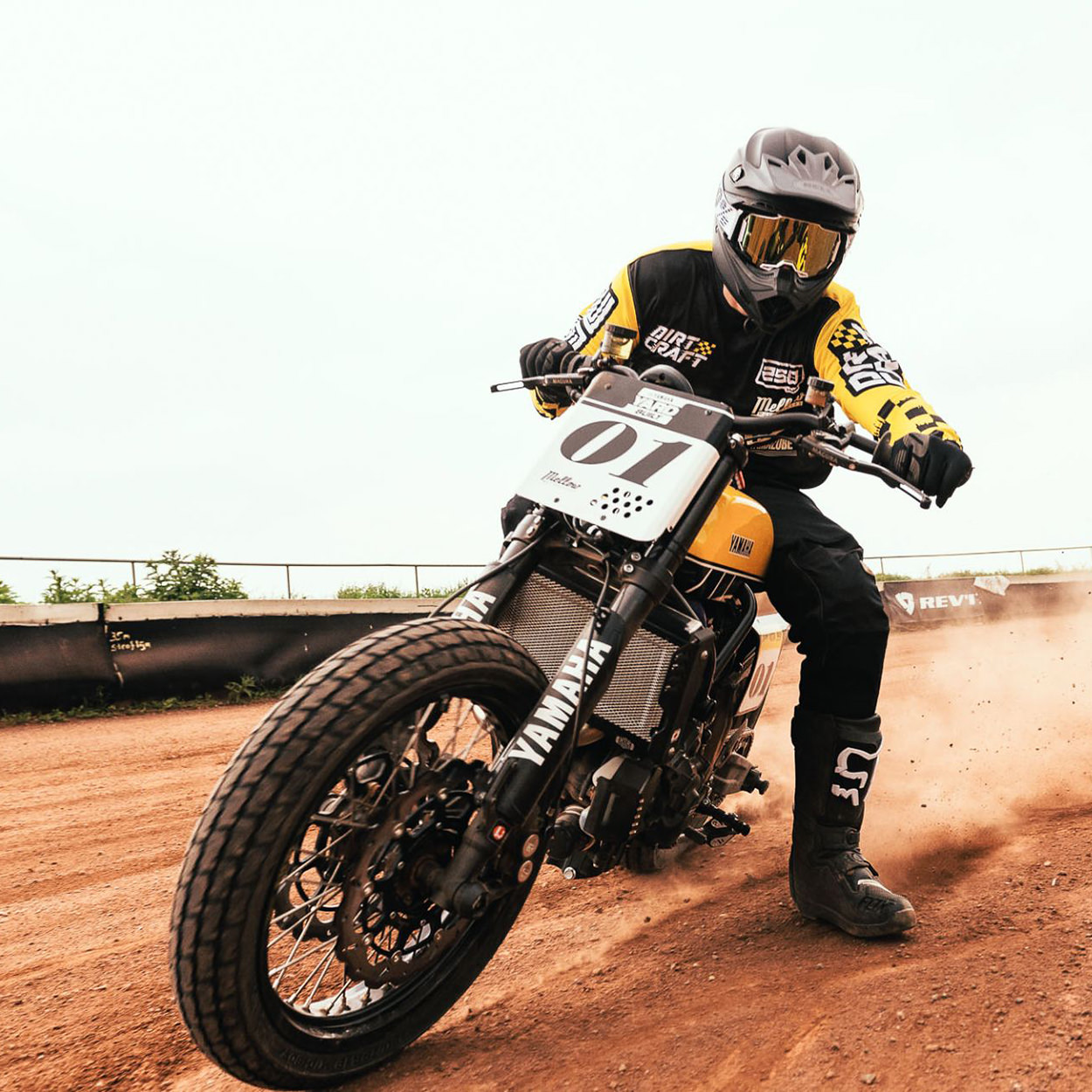 “The chassis is stable and predictable, and the engine has a linear power development. The bike acts completely un-agitated, and lets you find the exciting point towards the limit smoothly.”

The fact that it looks spectacular doesn’t hurt either, right? [More] 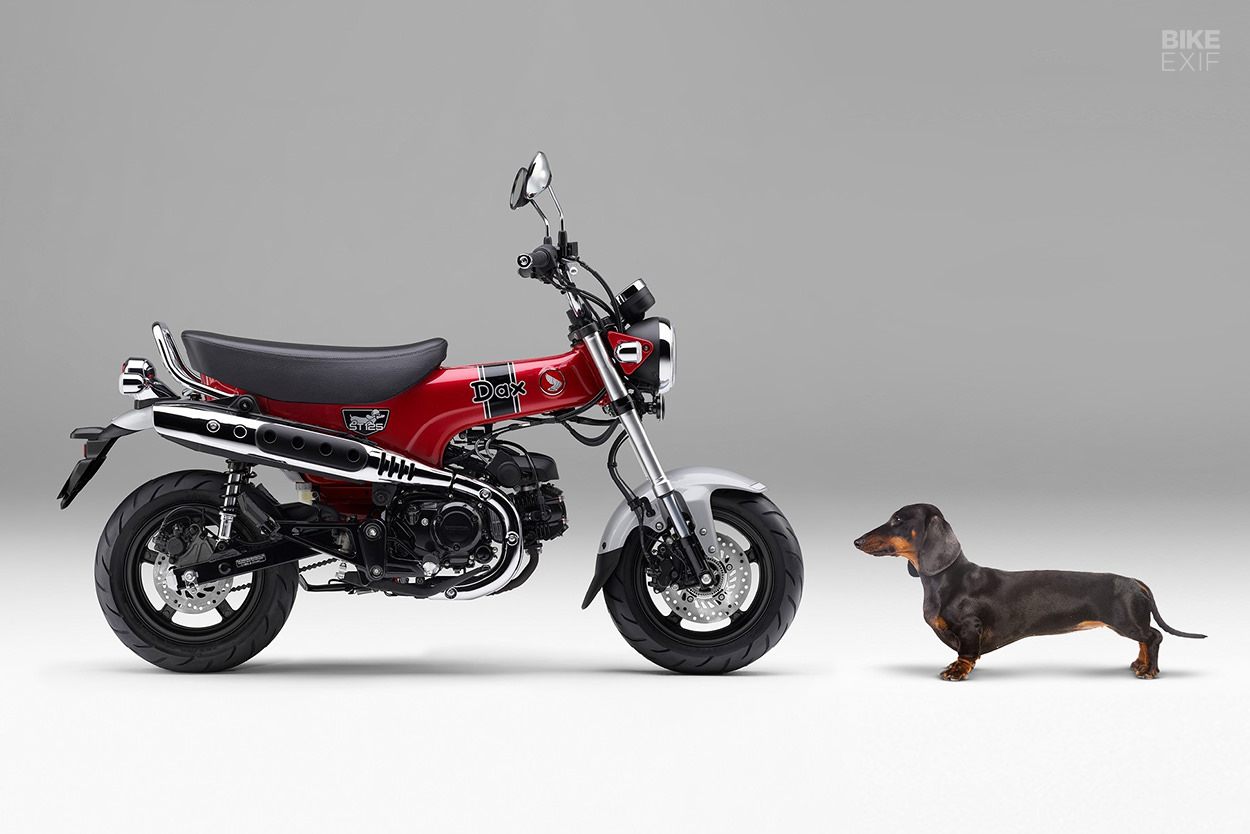 The ST125 Dax slots into Honda’s burgeoning retro mini-bike range, alongside modern iterations of the Monkey, Grom and Super Cub. It’s powered by the same engine as the Super Cub too—a 124 cc air-cooled single that makes 6.9 kW and 10.8 Nm, with a claimed top speed of 90 km/h [56 mph]. The four-speed transmission shifts via a centrifugal clutch, so there’s no clutch lever. 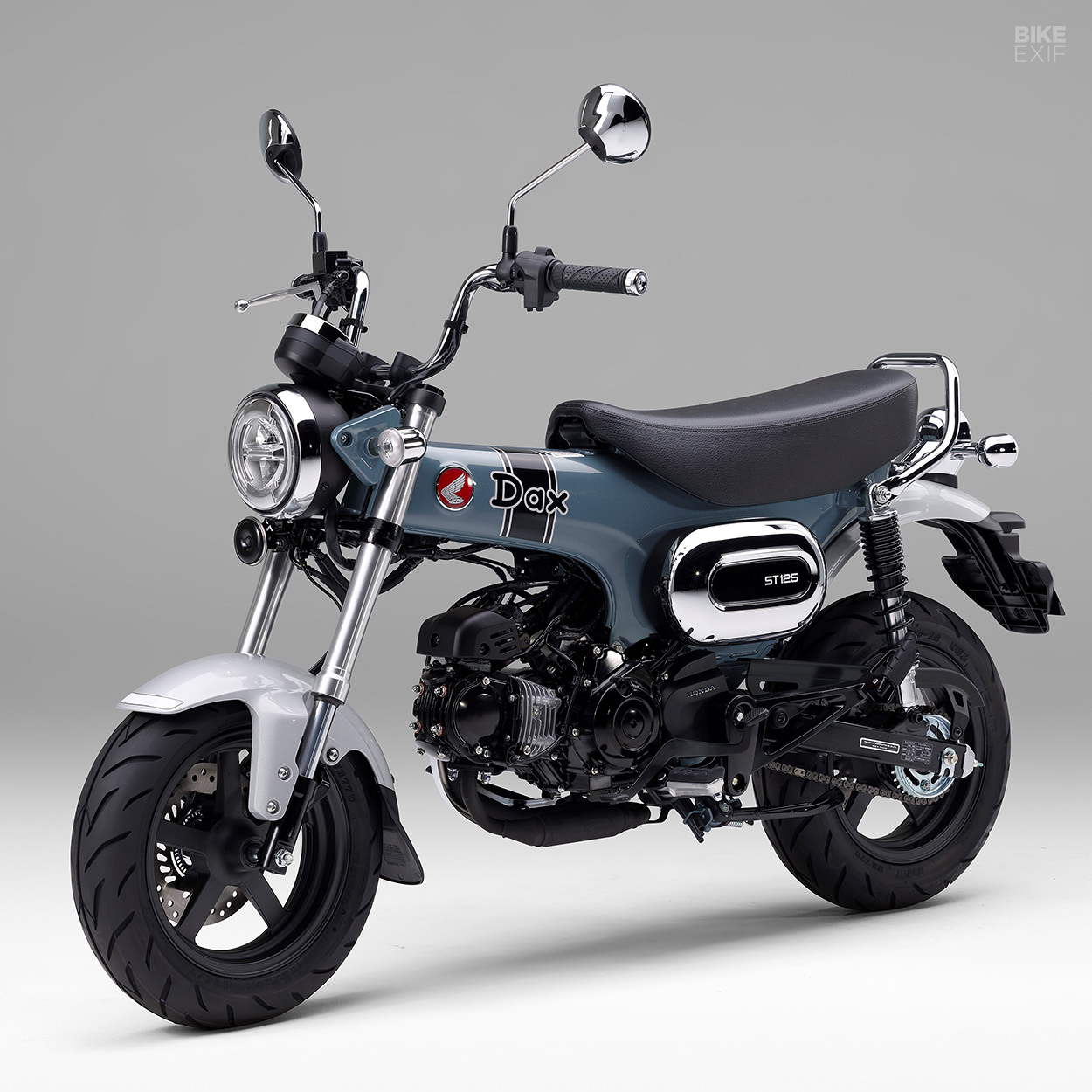 Just like the original Dax (or ‘CT70,’ if you grew up in the US), the new ST125 is built around a T-shaped pressed steel frame. The fuel tank’s housed inside the frame too, and carries a whopping 3.8 liters [approximately one gallon]. 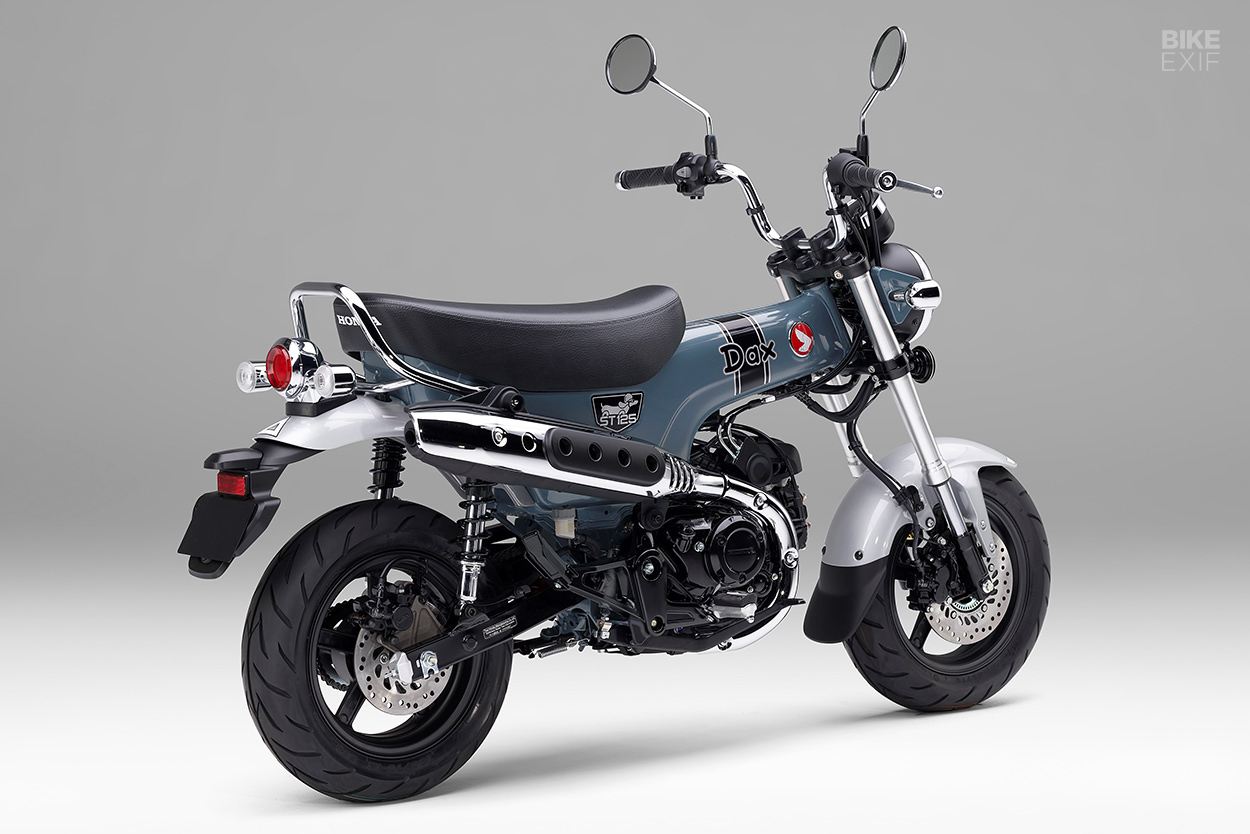 It’s also damn adorable. Available in grey or red, it’s a dead ringer for its predecessor thanks to its chromed muffler, banana seat and mini-ape bars. The silver fenders are a nice touch, as are the chromed rear lights and passenger grab rail.

Modern touches include LED lighting, a round LCD speedo and ABS-equipped disc brakes. 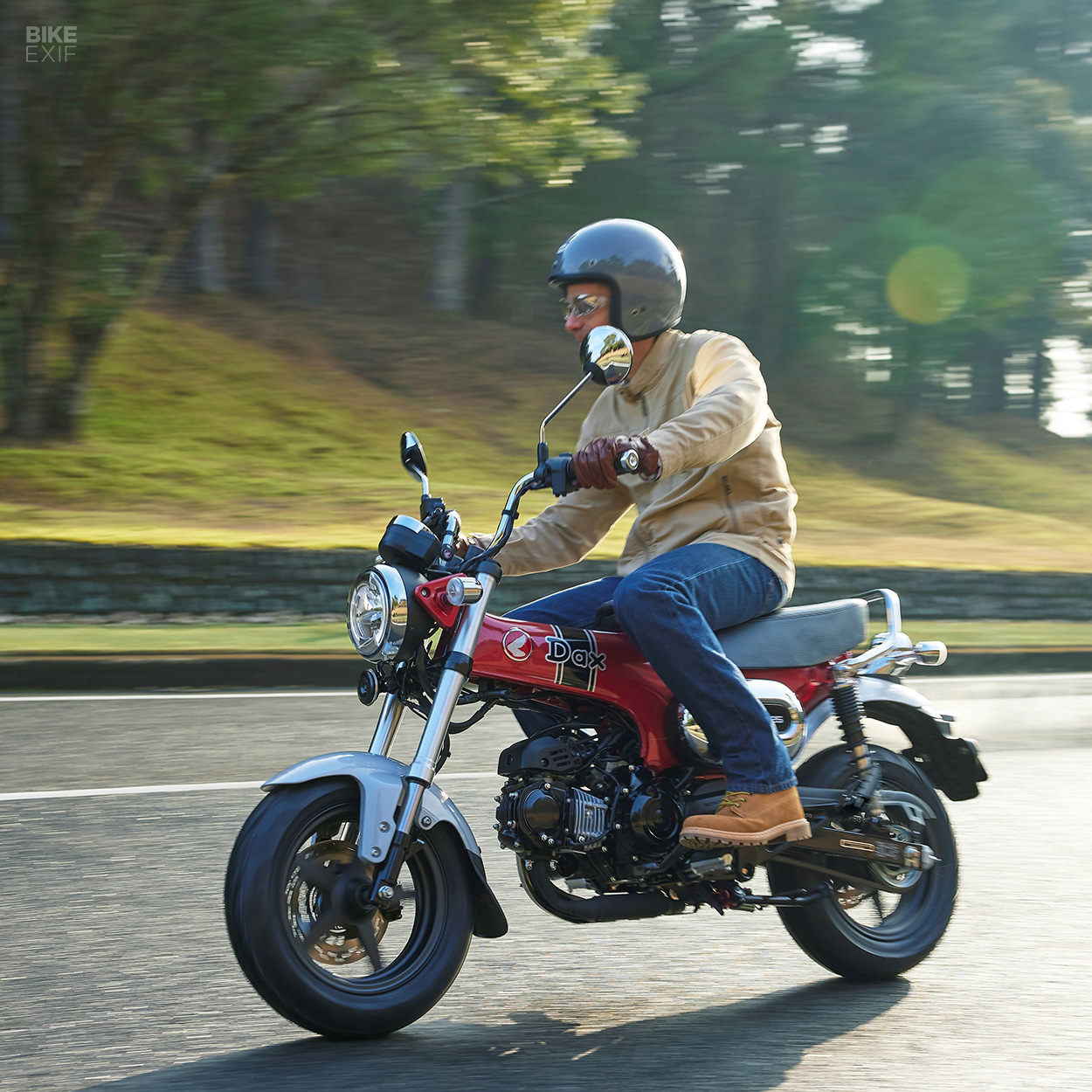 Kudos to Honda for tugging at our heartstrings with another tastefully revived classic—and for putting a Dachshund in the official photos. With fuel getting more expensive and inner city parking getting harder to find, bikes like this make more and more sense each day. 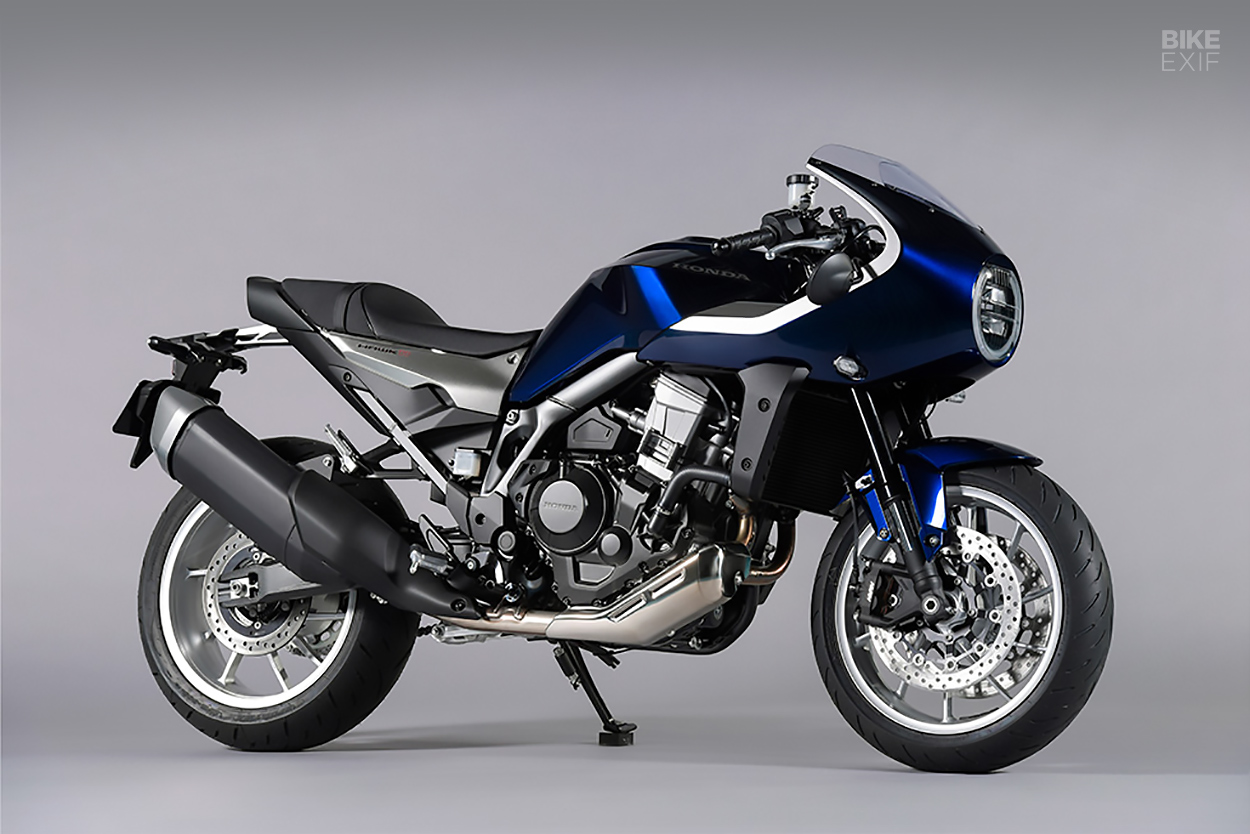 So far, Honda has only announced the Hawk 11 for Japan, and they haven’t revealed too many details about it either. What we do know, is that it’s powered by a 1,082 cc twin-cylinder engine—most likely borrowed from the Africa Twin. 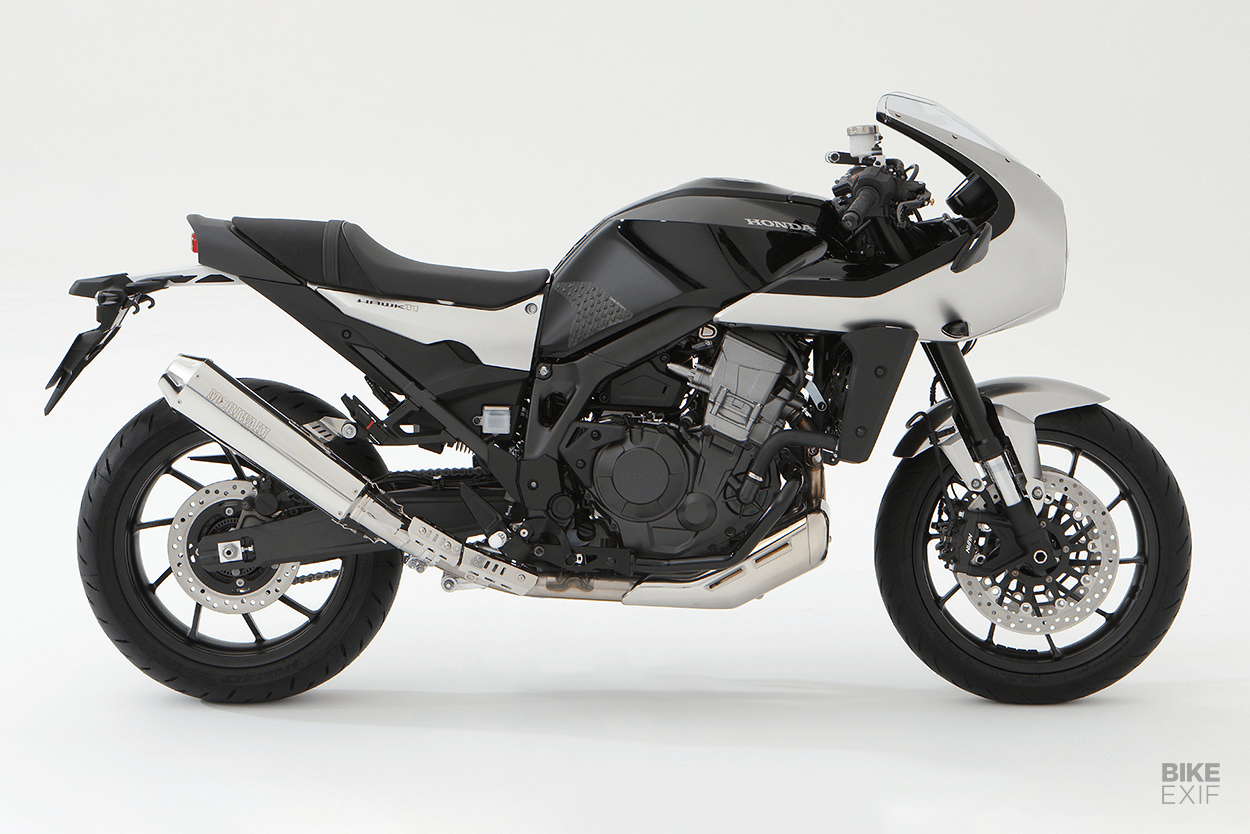 The frame is a semi-double cradle arrangement, with 17” wheels at both ends. The riding position is sporty, with the chunky exhaust muffler mounted high to optimize lean angle (according to Honda). Clip-on handlebars are tucked in behind a sleek molded fairing, and Honda have already revealed a number of custom parts for it too—like the Moriwaki exhaust shown above. 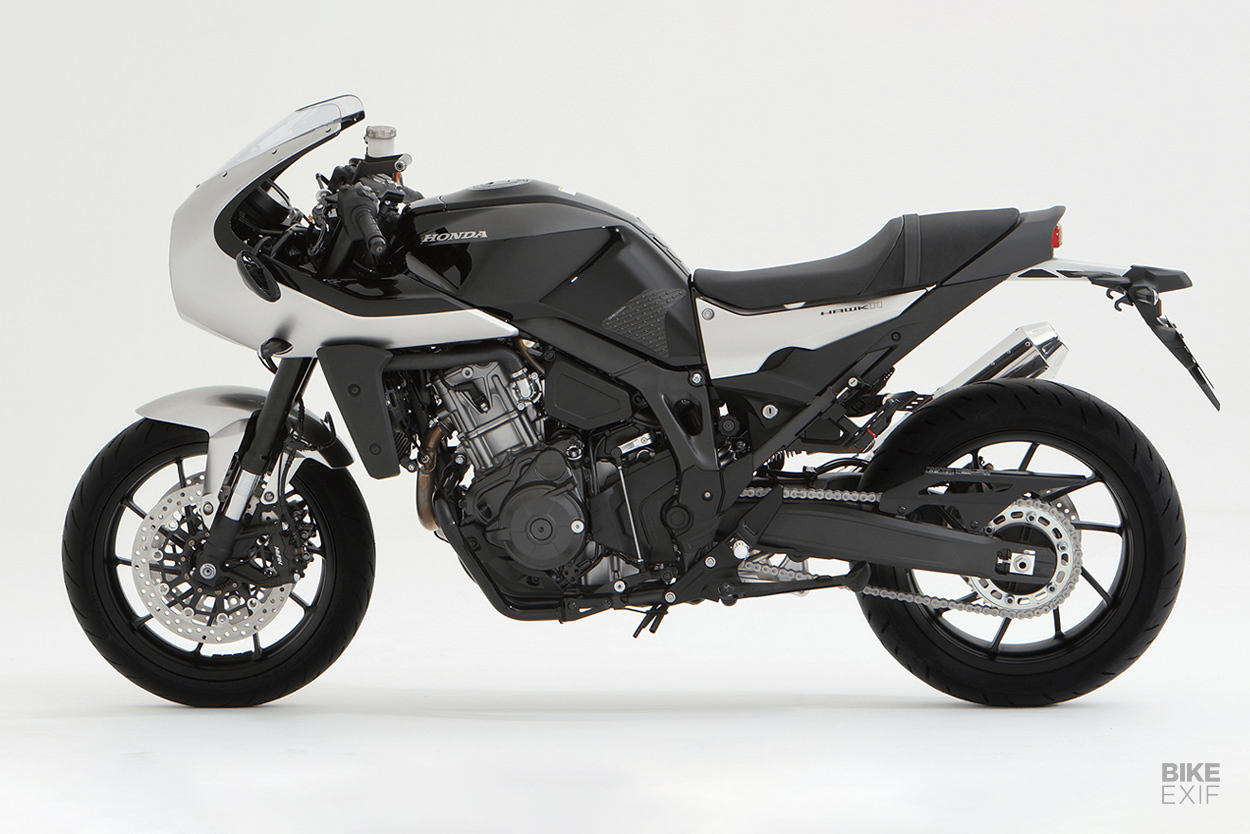 Honda are clearly aiming for a neo-retro café racer design here, but we’re not entirely convinced. Parts like the fairing and lipped tail cowl look good on their own, but the overall design lacks cohesion.

Time will tell if the Hawk 11 will make it to European and American shores—and if it’ll be a hit or a miss. [More] 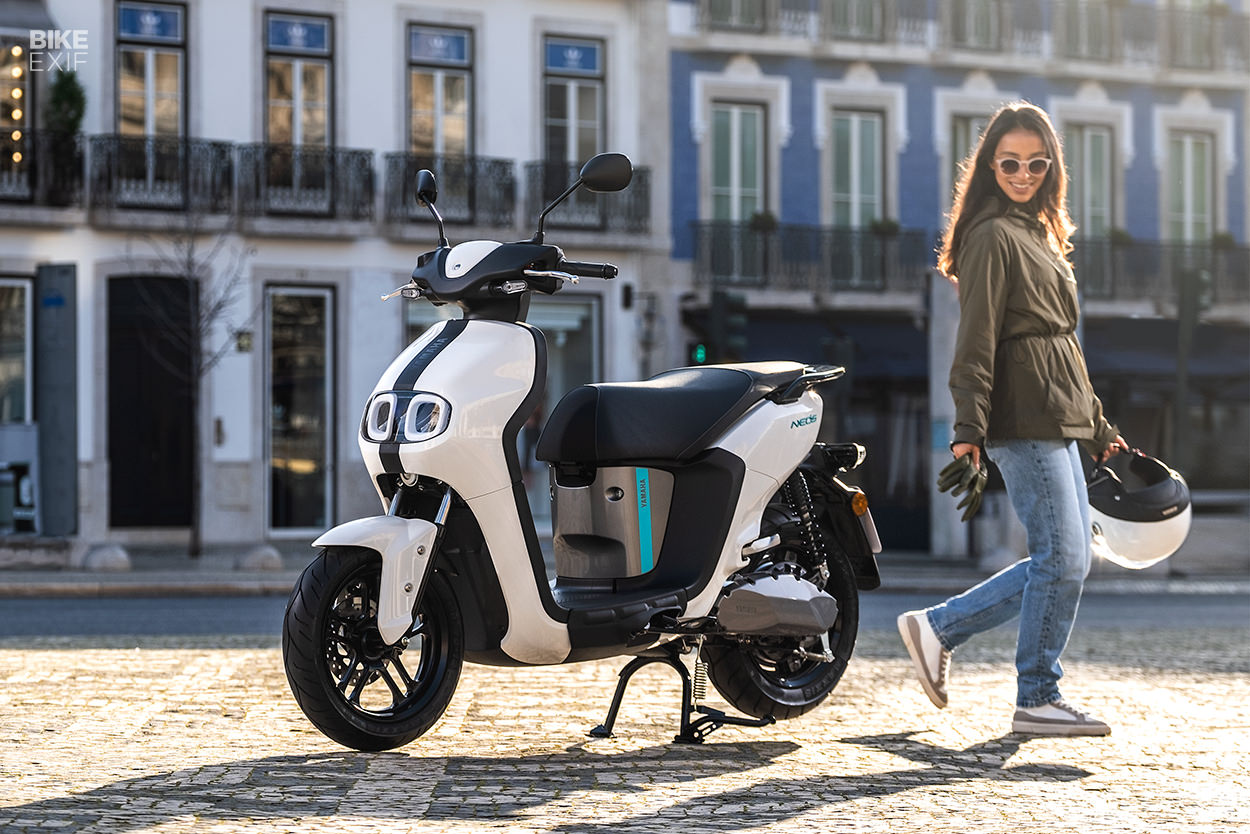 Yamaha’s been at the electric mobility game for longer than most, having debuted their first electric scooter way back in 1991. The Neo’s (seriously, we don’t get it) is billed as being the electric equivalent to a 50 cc petrol scoot. So it’s aimed squarely at city dwellers that cover short distances at restricted speeds. 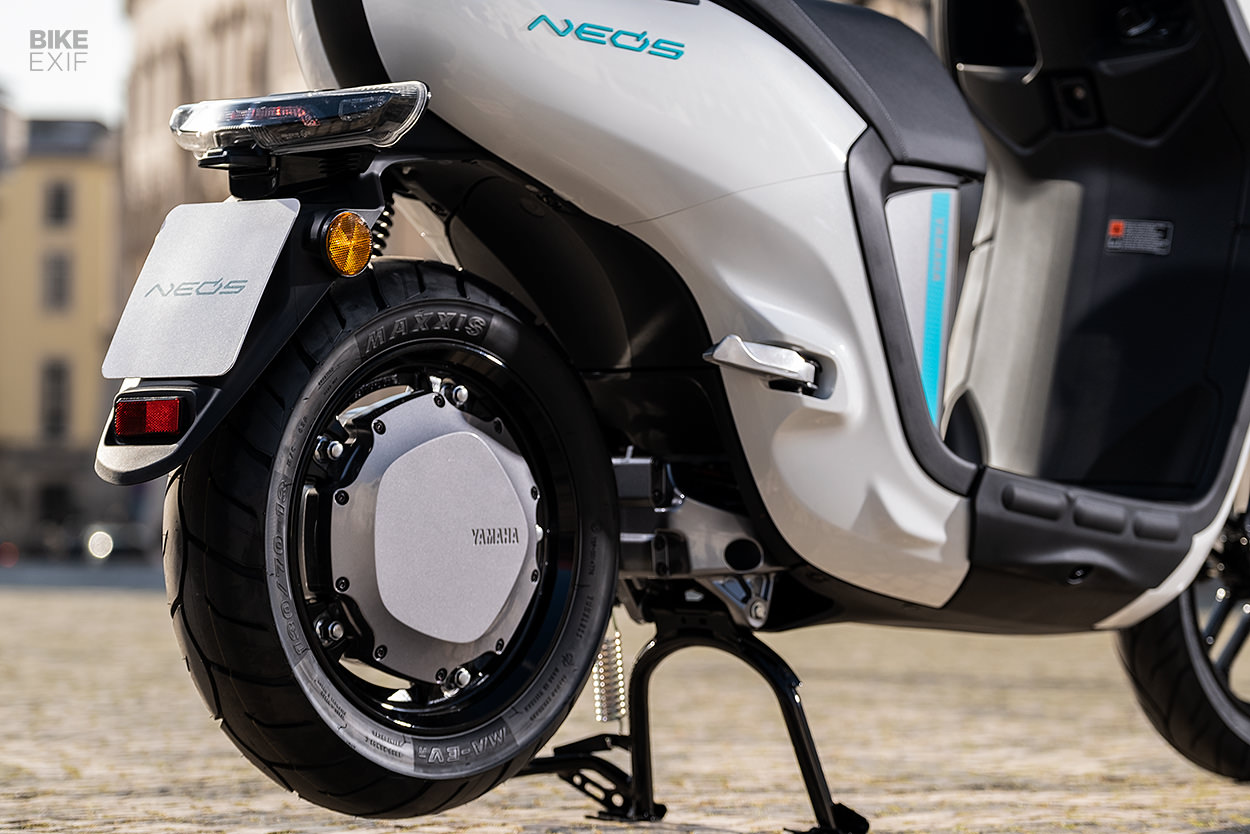 Output is listed as 2.06 kW for a 40 km/h [25 mph] top speed in ‘standard’ mode, with an ‘eco’ mode that cuts power to maximize efficiency. The battery is a 50.4 V / 19.2 Ah Lithium-ion unit, offering around 37 km [23 miles] of range. A second battery can be installed to double that, and each battery takes eight hours to charge fully. 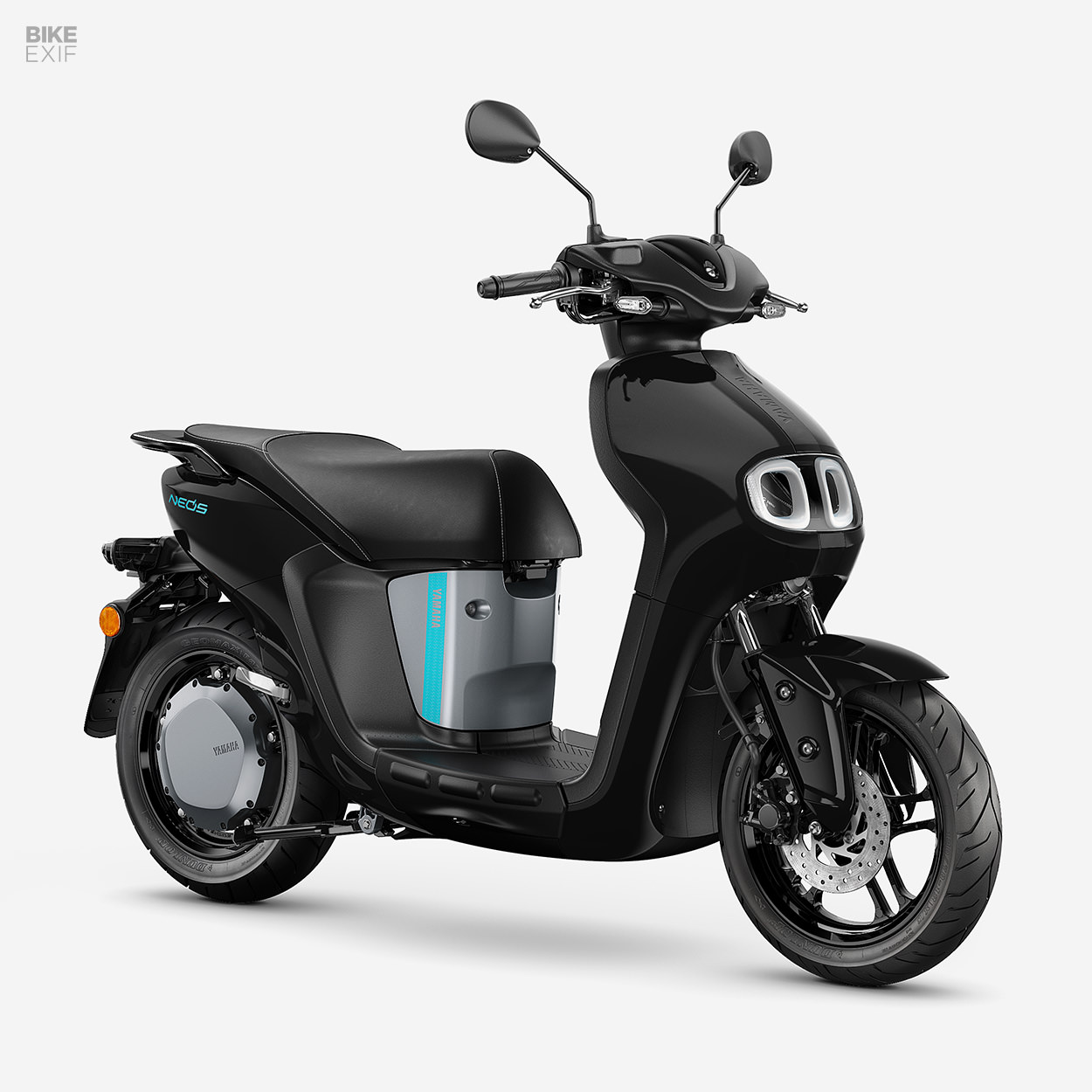 It’s an attractive little scoot too. The design is modern enough to look fresh, but not so futuristic that you wouldn’t want to be seen on it. The twin LED headlights are a nice touch, and there are rubber moldings fitted around the edges of the Neo’s to prevent scuffs.

The petite Yamaha also comes standard with a keyless ignition, an LCD display and the ability to connect it to Yamaha’s proprietary smartphone app. With the app, you can do everything from check your vehicle stats and share your rides with friends, to find your scoot when you forget where you parked it. 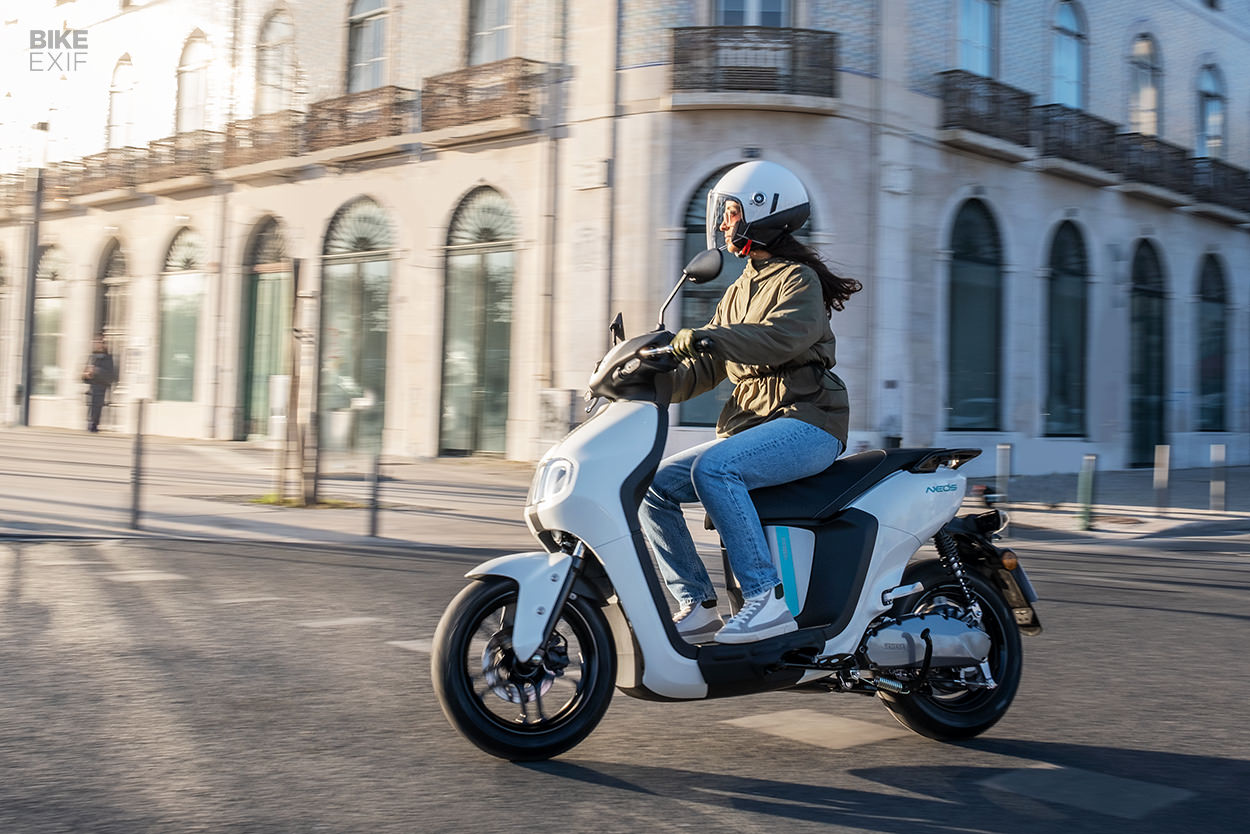 Right now Yamaha are only launching the Neo’s in certain European countries. Pricing will vary, but in the UK it’s currently listed at £3,005—which is about a quarter of the price of their flagship TMAX maxi-scooter. [More] 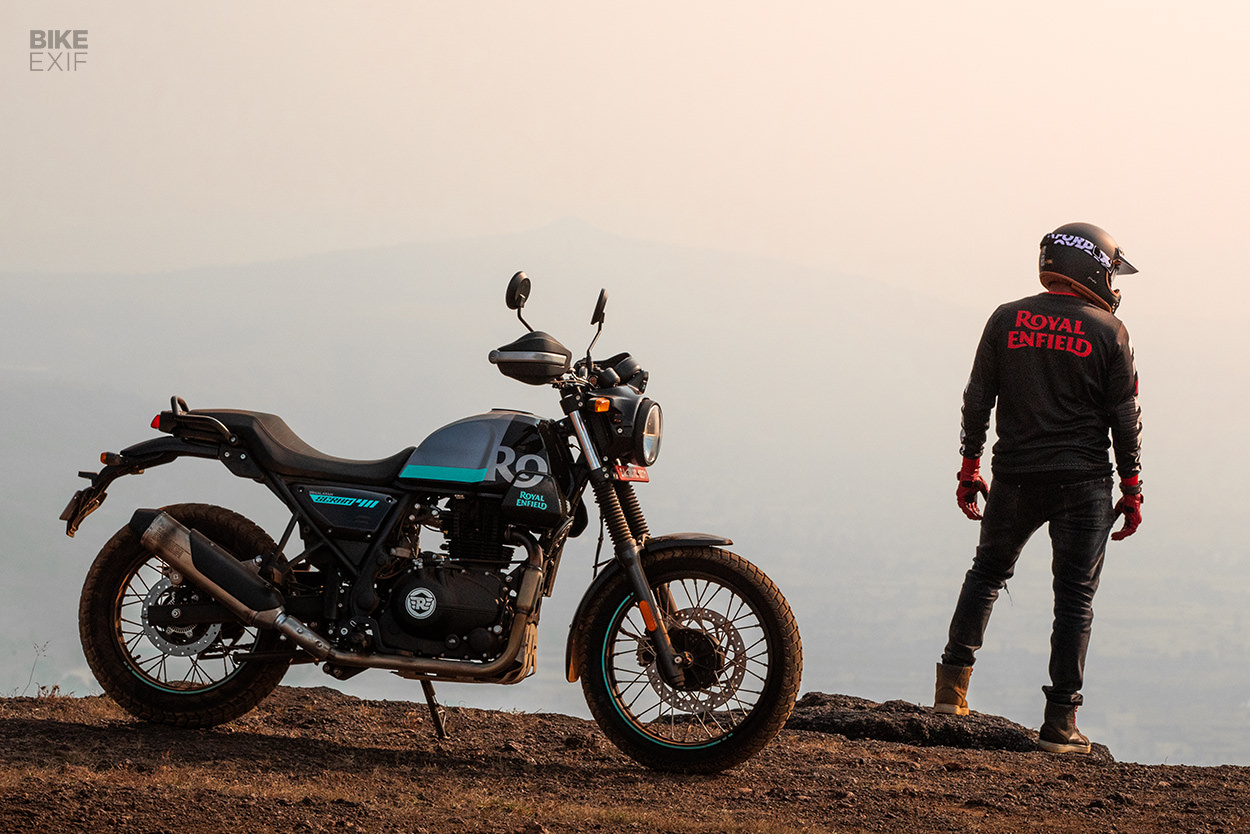 Royal Enfield Scram 411 Royal Enfield’s latest offering is basically just a rejig of one of their existing models, but that’s not a bad thing. Meet the Scram 411—a variant of the marque’s quirky Himalayan dual-sport.

While the Himalayan’s 21” front wheel and ample suspension travel set it up as a plucky adventure bike, the Scram 411 is more of a modern-day scrambler. The front wheel’s dropped to a more street-savvy 19” diameter, with 10 mm less front suspension travel. Despite this, the bike’s ground clearance has only shrunk by 20 mm, putting it at a usable 200 mm.

The visual changes are less subtle though. Park them next to each other, and the Scram 411 looks like a stripped-back custom Himalayan. 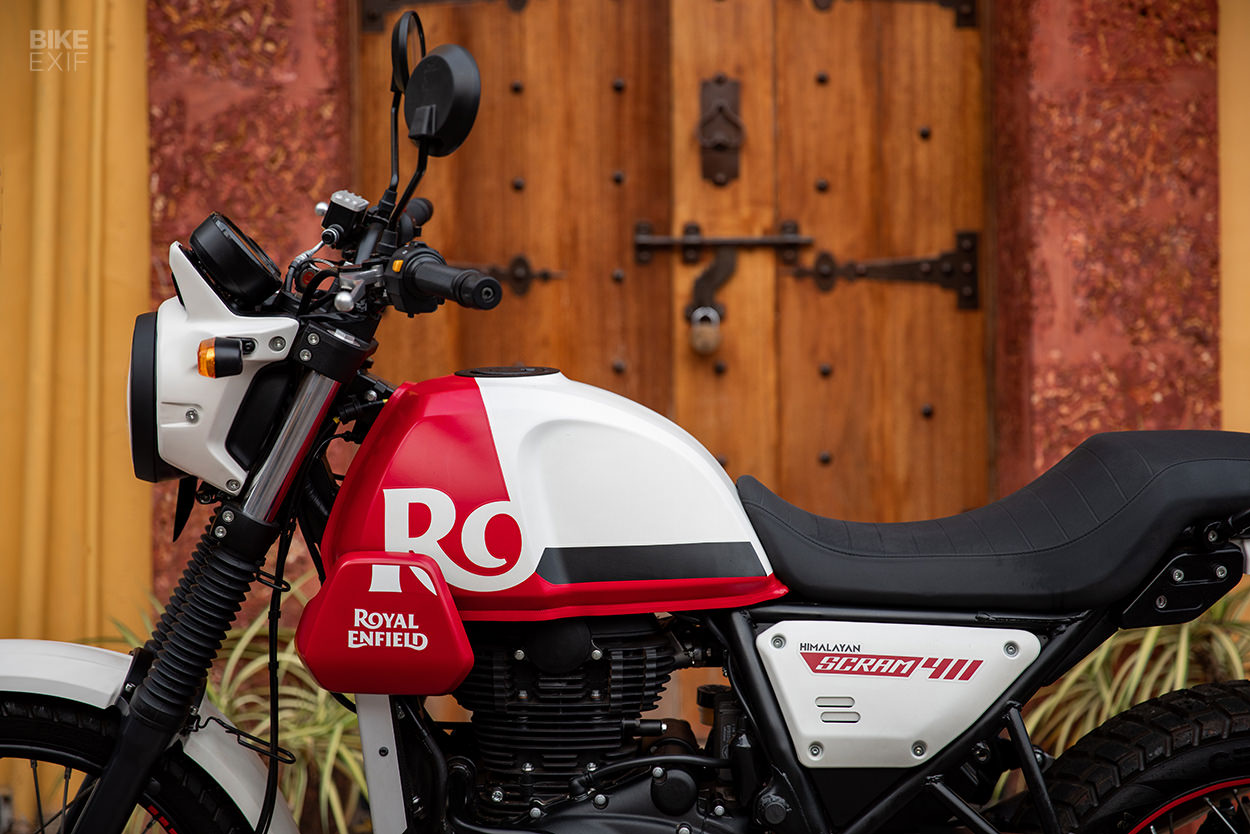 Gone is the latter’s high front headlight and peculiar front ‘crash bar’ design. Instead, the Scram 411 wears a compact headlight nacelle, and a pair of tiny ‘wings’ that flank the fuel tank. The original split seat is replaced by a one-piece unit, designed with comfort in mind.

The Scram 411 also gets a low front fender, new side covers, a different taillight and a redesigned grab rail. And it appears to share the Himalayan’s exhaust and bash plate. 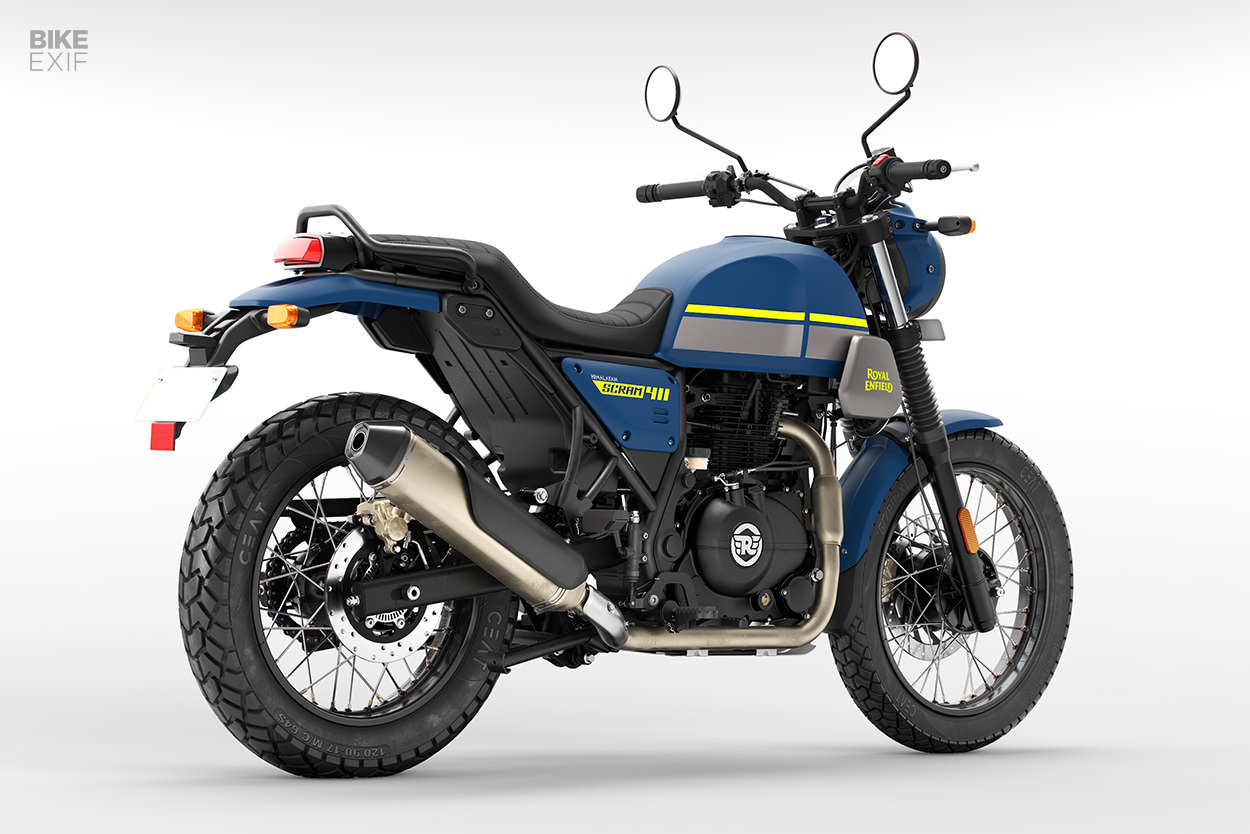 Like most contemporary OEM-built scramblers, the Scram 411 is built for commuting in the week and hooning on the weekends. So Royal Enfield have pitched it at younger riders, with seven different liveries that take inspiration from “hip-hop cultures like skating, and night streets in cities like Tokyo and New Delhi.” In other words, it’s colorful—with a full range of apparel and rider gear to go along with it, naturally.

The Scram 411 is available right now in India, and will be rolling out to Europe and Asia Pacific regions next, before eventually making its way to the Americas. And yes—we’ll be nagging Royal Enfield for a test ride. [More] 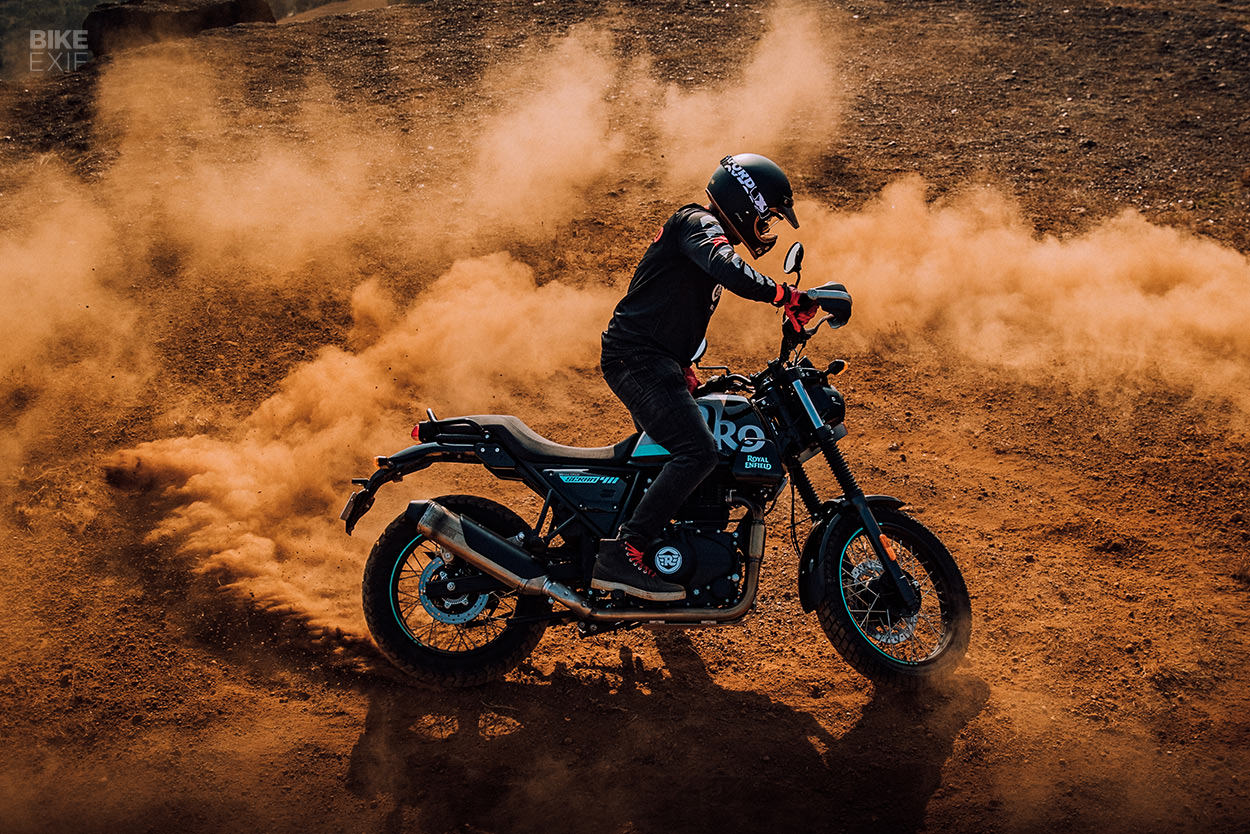