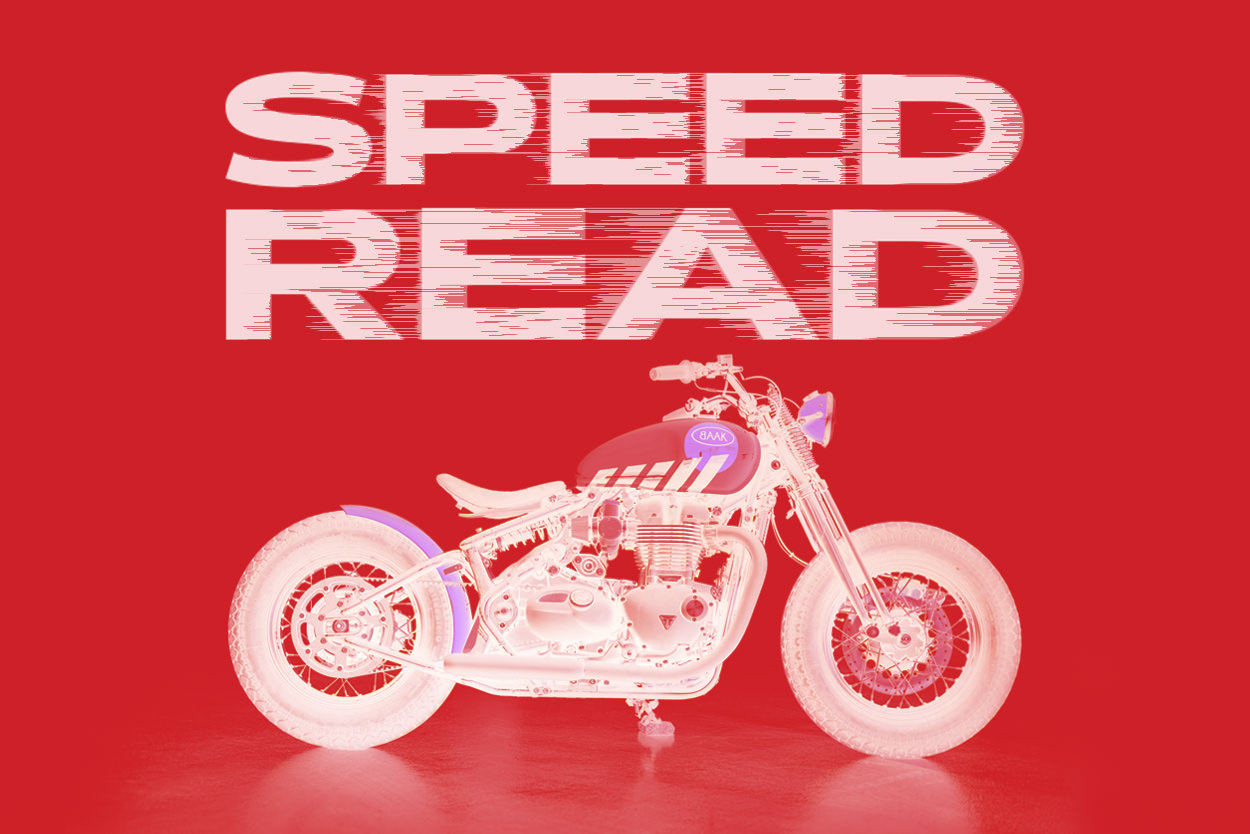 We’ve gone global this week, with two-wheeled goodness from France, South Africa, Portugal and the USA. Our list includes a Triumph Bobber, a period-correct Triton, a custom electric Supermoto, and a new collaboration between Indian and Super73. We end off with a vintage dirt bike video from Age of Glory. 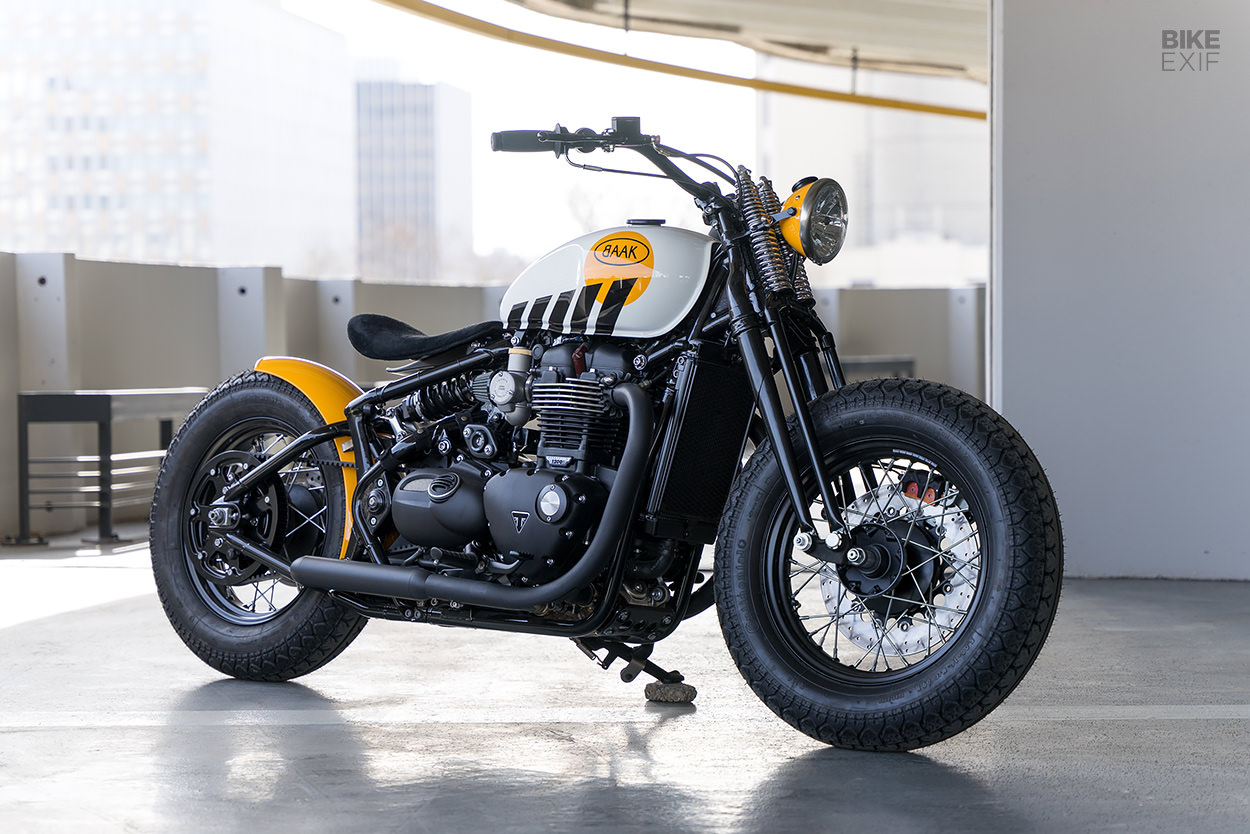 Triumph Bobber by BAAK Motocyclettes The Triumph Bobber looks classy as heck out the box—but that makes it tough to customize. Which is why a lot of builders opt to fine-tune it rather than overhaul it—and why the cleverest companies make bolt-on parts for it.

BAAK Motocyclettes are one such company. With headquarters in France and the USA, they’ve customized a bunch of Triumphs, and have a catalog stacked with Triumph-specific bits. 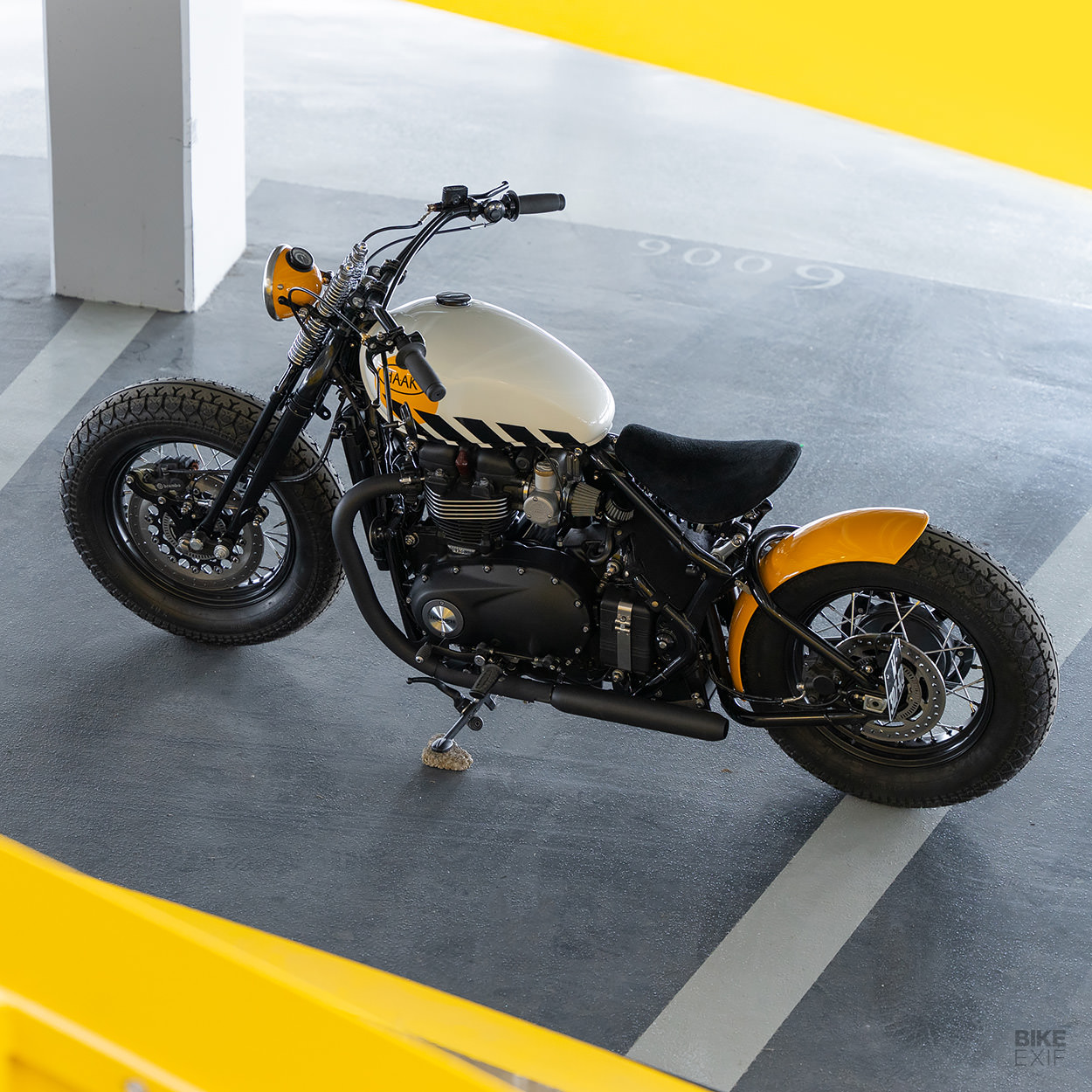 This Bobber features a tasteful mix of their parts, combined with sunny livery. Dubbed ‘Sacramento,’ it’s a homage to Californian custom culture (and their LA shop). And just about everything you see here can be replicated on your own bobber, with a credit card swipe and a weekend in the garage. 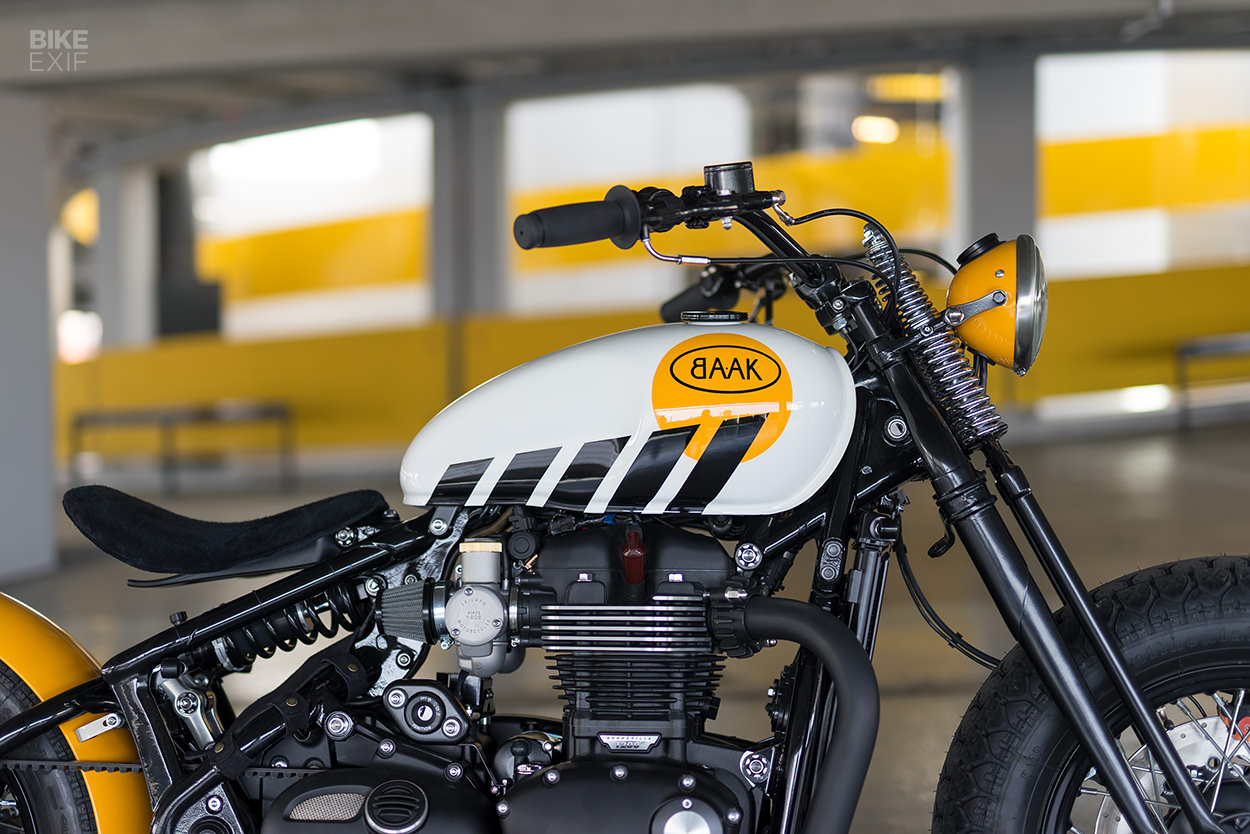 Starting up front, BAAK fitted their own Bobber-specific springer-style forks. A set of ‘BAAK No. 1’ handlebars do duty higher up, held by custom aluminum risers and fitted with Biltwell Inc. grips. Out front is a Bates-style headlight, with a Motogadget speedo sunk into it.

The switches are particularly cute; they’re BAAK’s own kit, held in place by leather straps. The team also installed a new cable kit (to accommodate the wider bars), and an underbar mirror. 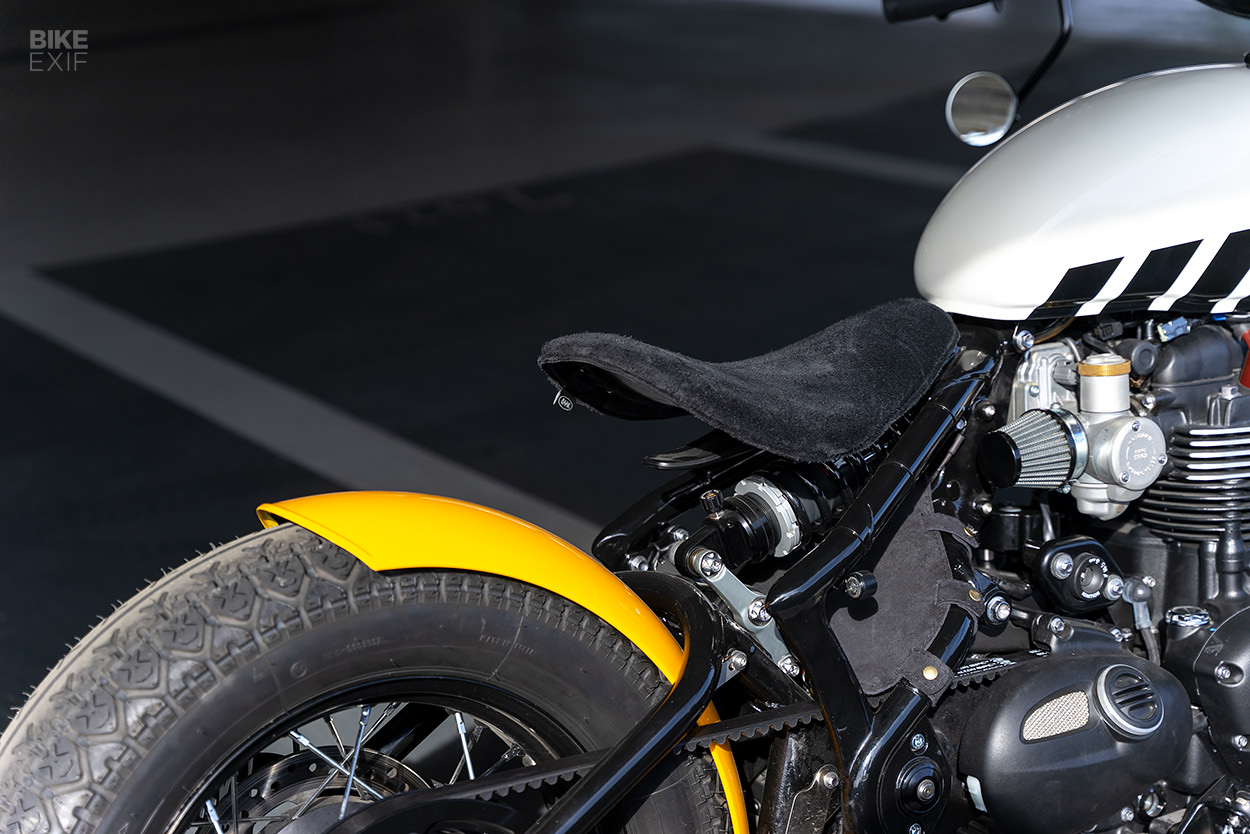 Out back you’ll find a new BAAK seat, a new shock, and a leather cover blanking off the open part of the frame. The airbox has been deleted too, and the silencers have been swapped out. Oh, and the final drive’s been converted from a chain to a belt setup, too.

Added up, these seemingly small mods make a big impact on the Hinckley twin. And it’s hard to dislike that fresh white, yellow and black livery. [More] 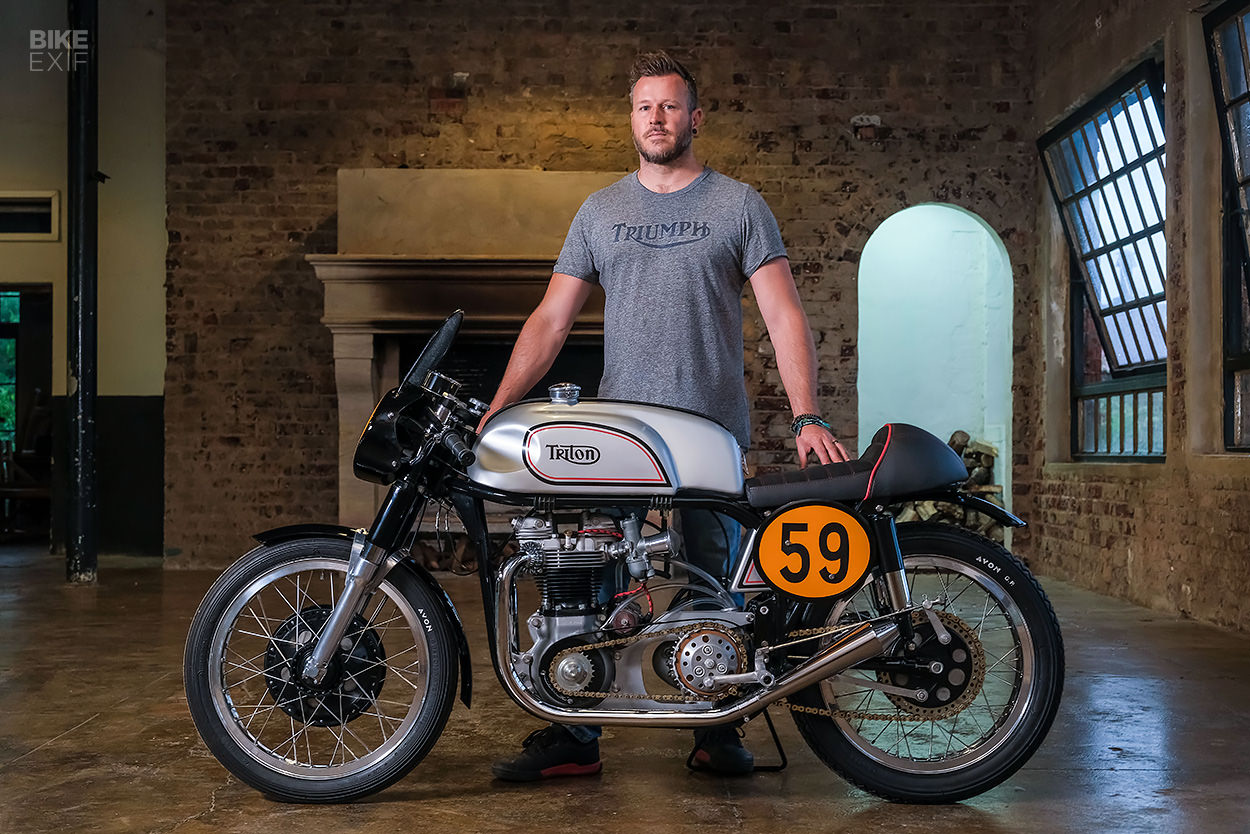 Justin Steyn’s Triton This tidy Triton comes from Justin Steyn in South Africa, and took a whopping ten years to build. As Tritons go it doesn’t tread any new ground, visually, but that’s exactly how Justin intended it. He tells us that he first bounced some ideas around, but then “came to my senses, and decided to build her in a true, period-correct Manx style, from the mid to late 50s.” 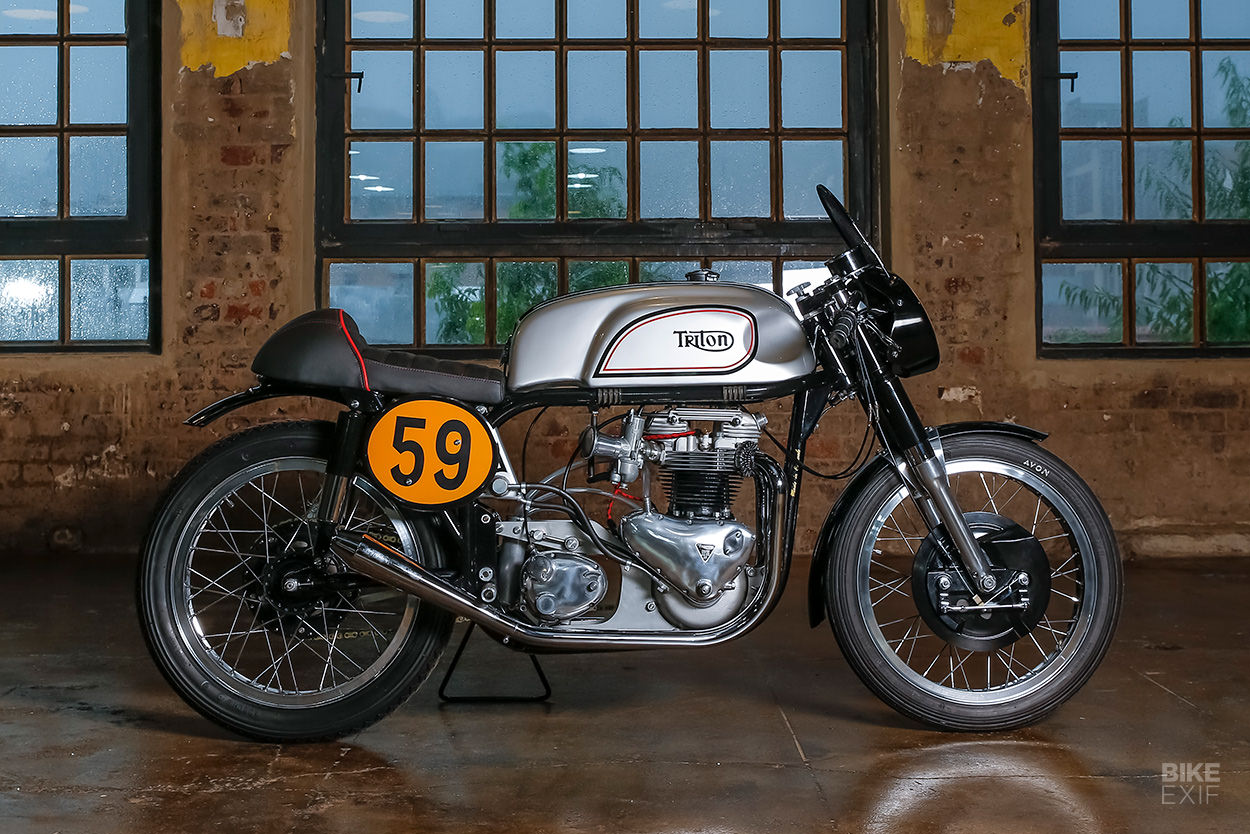 The build is a tribute to the late Rhodesian racer, Ray Amm. He had the distinction of winning two classes at the Isle of Man TT in 1953, and bagged a number of prestigious titles at other events throughout his career. ’59’ was his number. 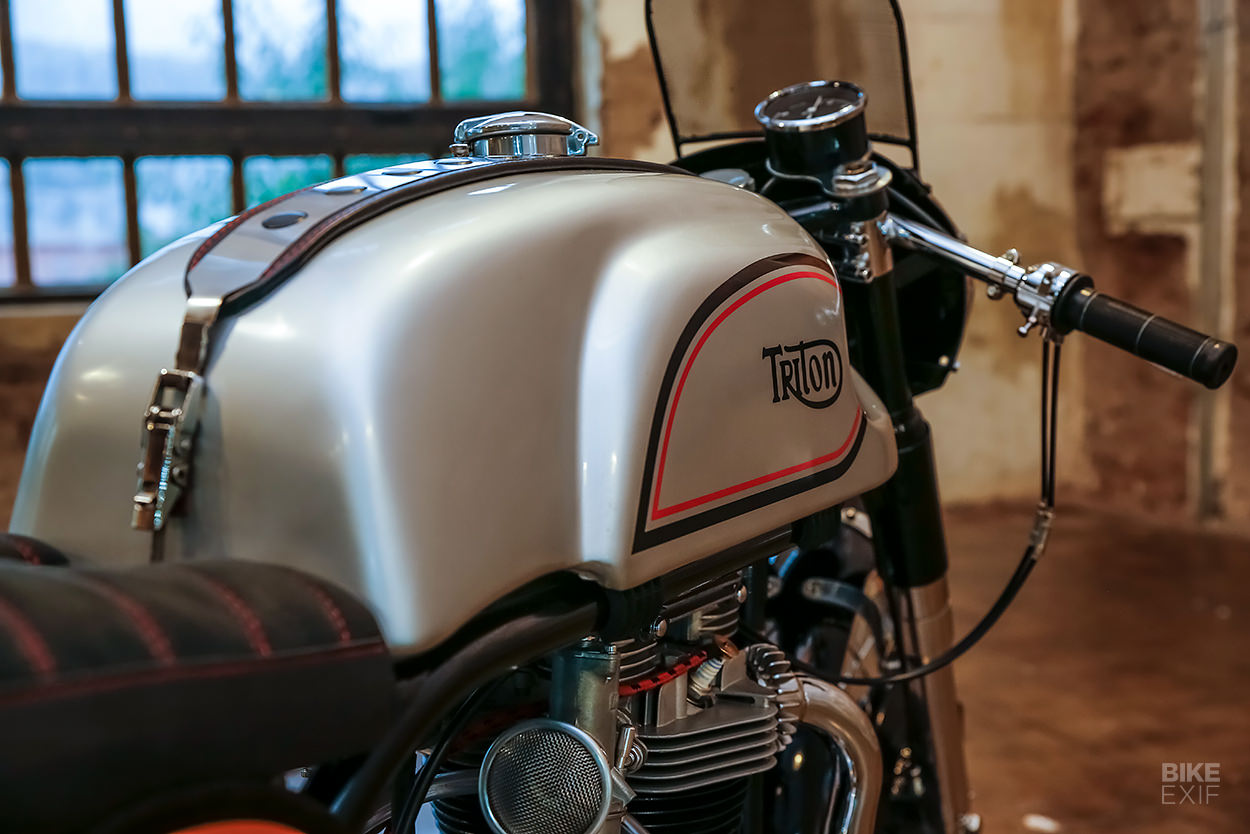 The frame is a 1955 Norton Dominator Wideline Featherbed unit, and Justin’s quick to point out that it’s an original—not a replica. It’s hooked up to Norton Roadholder forks, fitted with new cartridge-type internals from Landsdowne Engineering. Morad Akront rims are laced to Triumph hubs, which have been machined for cooling and weight reduction.

Although the bodywork looks restored, it’s all new. The fuel tank, oil seat, number boards and fly screen were all hand-beaten from aluminum, and the exhaust is a one-off too. The custom tank strap is a combination of stainless steel and leather, and the seat’s covered in leather and Alcantara.

Justin didn’t go it alone though—Rob Godwin fabricated the bodywork, Kyle Harvey rebuilt the motor, and Alan Mendelbaum hand-painted the tank and number boards, in IOMTT regulation black and yellow. “I requested that he doesn’t try to hide the brush strokes,” says Justin, “to give the bike a more authentic feel.”

“South African British bike legends also worked on this bike: Peter Moody and Henry Kinnear, who have since passed and were well respected in the historic motorcycle fraternity.” 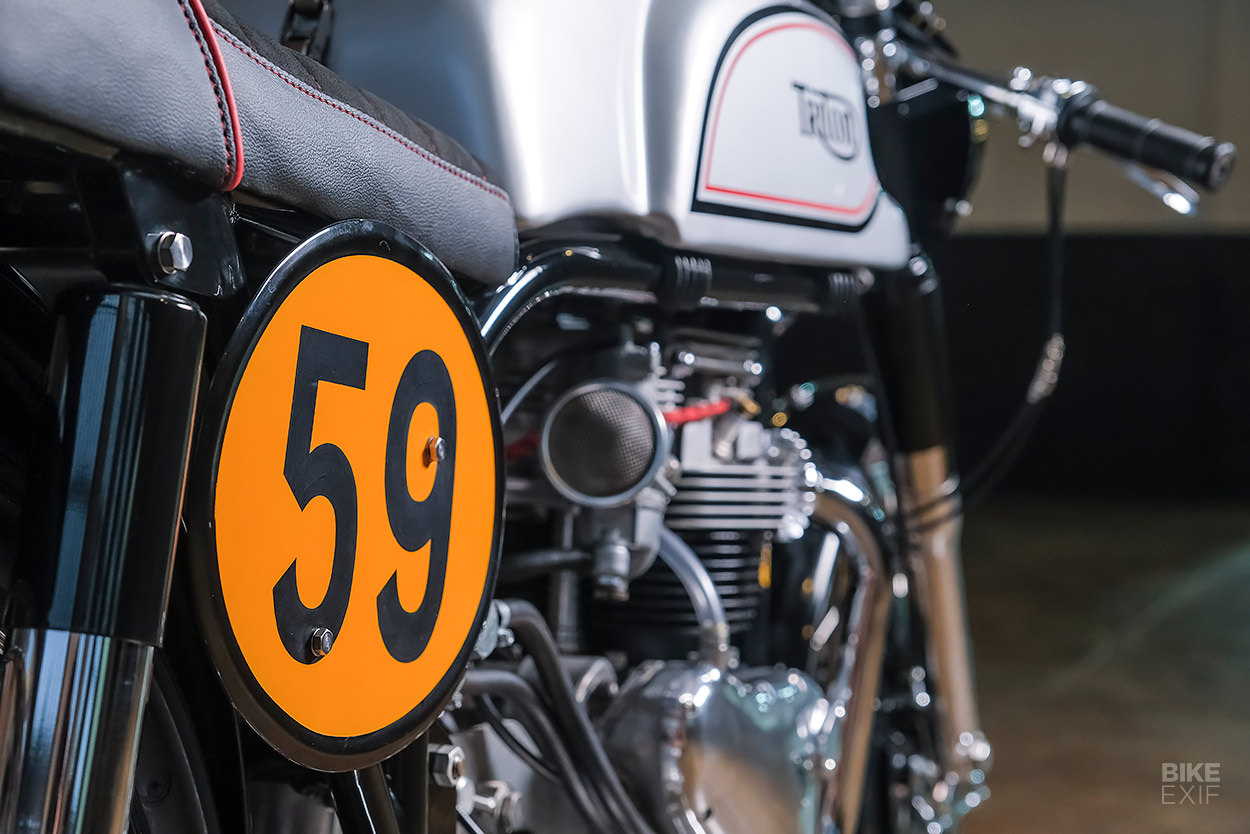 Finished off with a smattering of period-correct parts, this Triton is the perfect time capsule build. But despite spending a decade bringing it to life, Justin’s already sold it and moved onto the next project. [Justin Steyn Instagram | Images by Dom Barnardt] 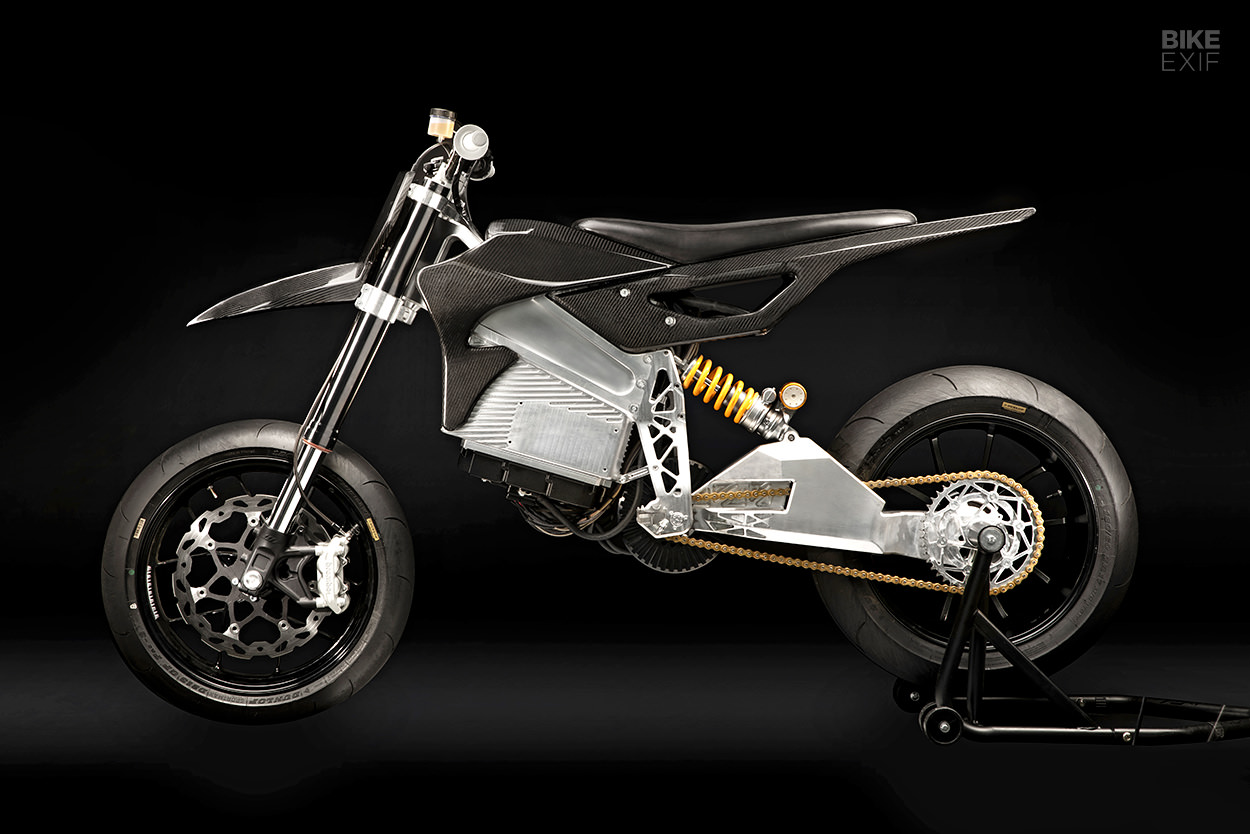 Liion electric supermoto by Axiis Engineering Art The crew at Axiis in Portugal knows how to wield a CNC machine—the company makes a host of tasty parts for motocross and enduro bikes. Now they’ve stretched their abilities to the max, by building a whole motorcycle.

Powered by a 134 hp / 240 Nm electric motor of undisclosed origin, the Liion is a 133 kilo [293 lbs] supermoto four years in the making. And the good news is that Axiis are planning to put it into production soon. 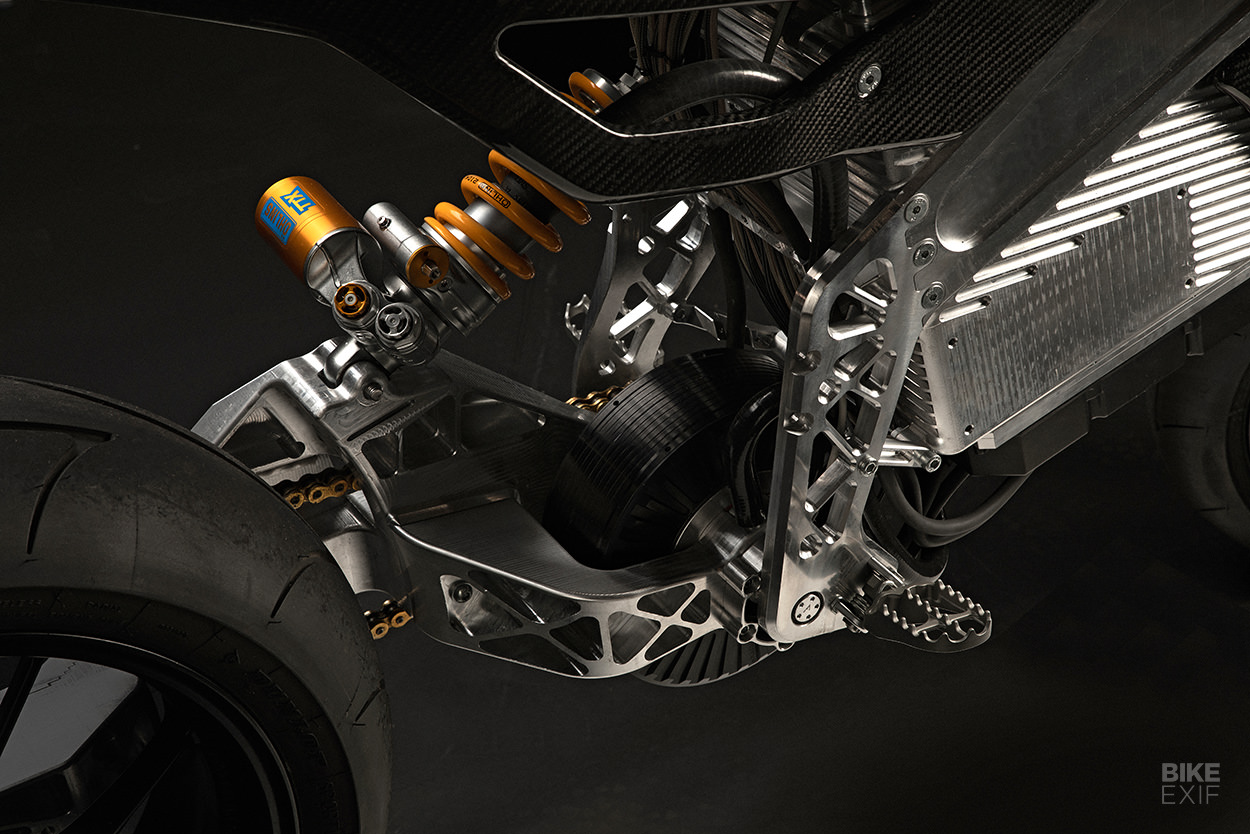 The bike flexes the Lisbon-based company’s skillset in a massive way. The chassis and battery box are integrated for maximum rigidity, and the rear wheel is held by a stunning single-sided swingarm. The running gear is top-shelf; WP Suspension forks, an Öhlins rear shock and Brembo brakes.

All of Liion’s bodywork is custom too. Axiis created it by machining aluminum molds for the final carbon fiber parts to be shaped over. The design is svelte, minimal and purpose driven, and it’s clear that performance was top of Axiis’ check list. 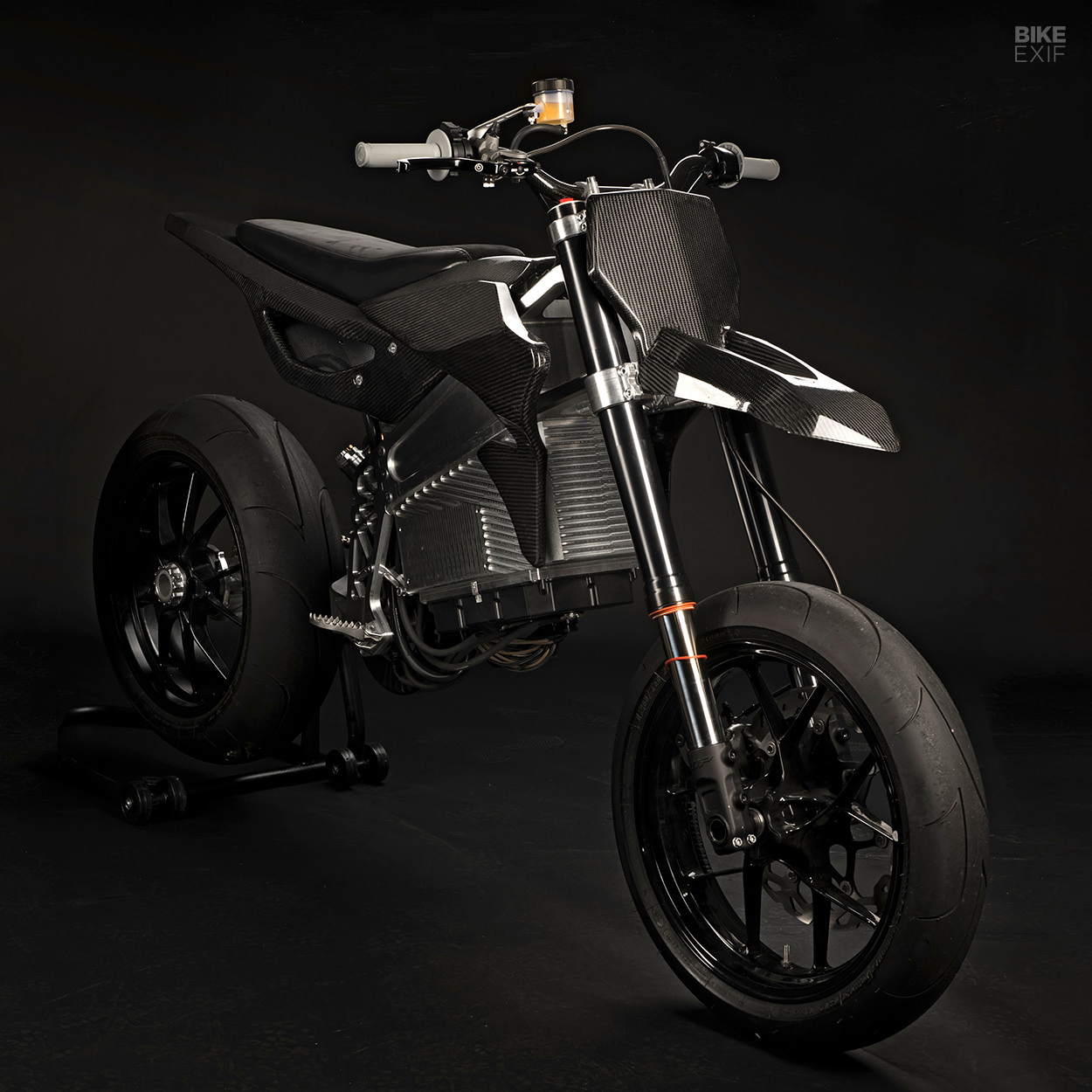 One of Axiis’ founders, Luís Fialho, explains that their goals were rigidity, optimal weight distribution, a low center of gravity and a usable geometry. “The weight distribution is closer to what a sportbike uses,” he explains, “with 54% of the weight over the front wheel. The rider position is different from a typical supermoto, to be able to put more weight in the front and deliver all the power without flipping the motorcycle.”

Axiis are now looking into funding options, to make a commercial version of the Liion a reality. And we hope they get it right, because this thing looks wild, and we want to see a street-ready version of it. [More] 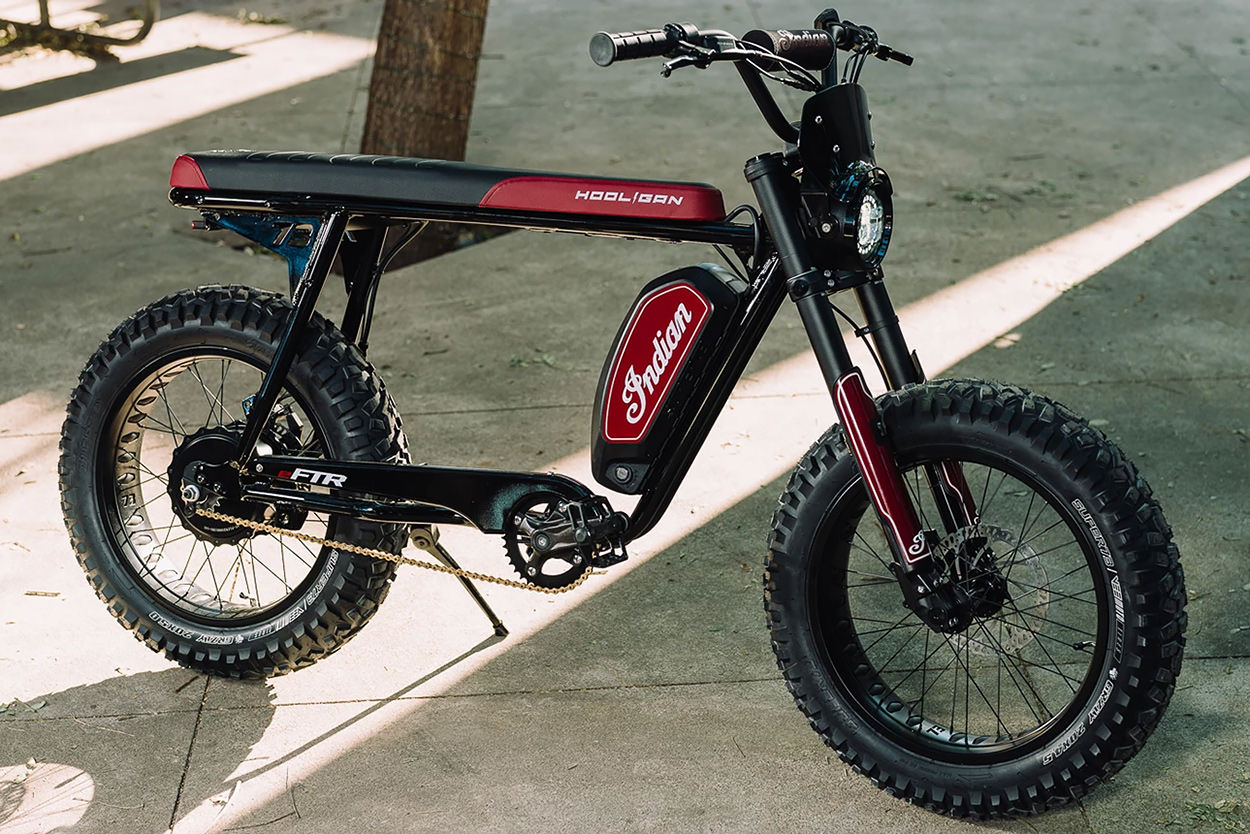 Using one of Super73’s popular pedal-assist electric bikes as a base, the eFTR Hooligan 1.2 adds a huge dose of FTR styling. Priced from $3,999.99 it’s not billed as a full-on electric motorcycle—instead, it’s pitched as a sassy urban runabout. 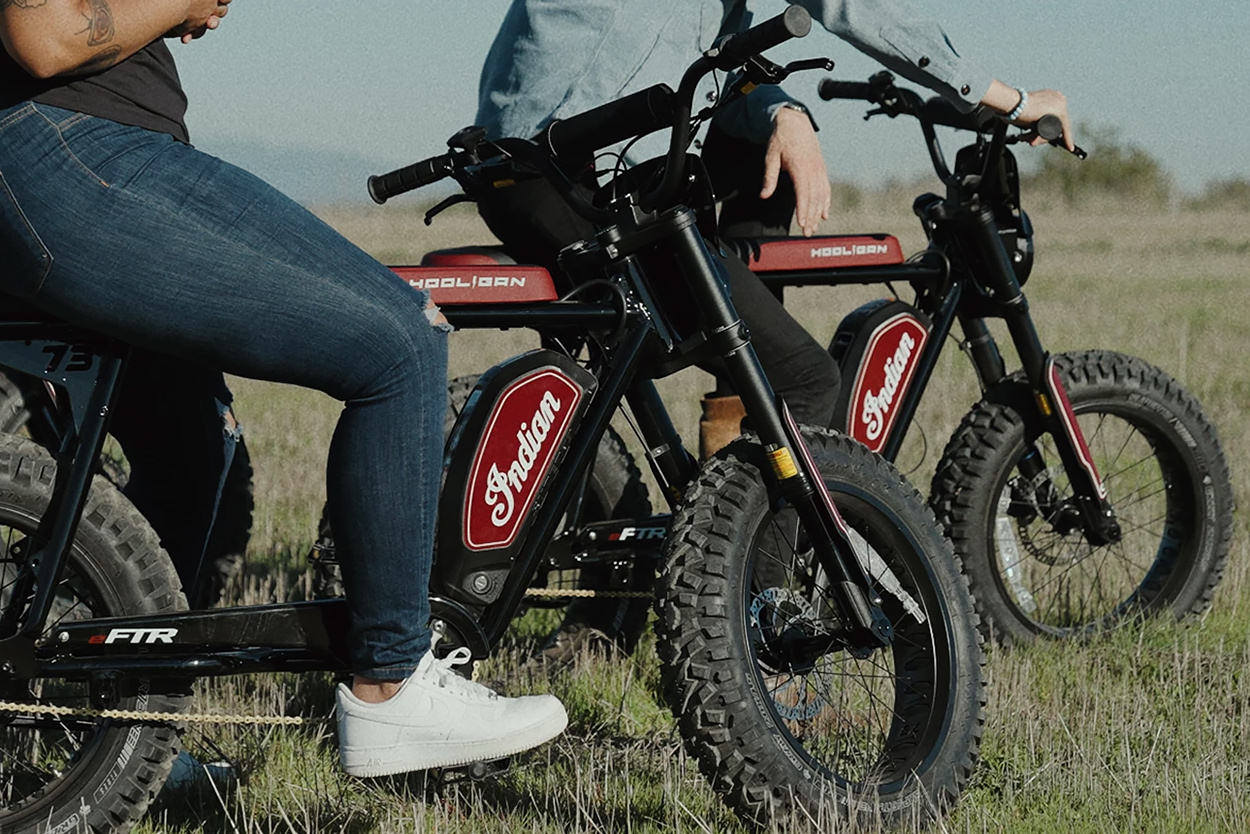 The 1.2 kW motor can get you up to a maximum speed of 28 mph (with pedal power), and can run either just with the pedals or throttle, or in multiple pedal-assist power modes. The removable 960-watt battery claims a minimum range of 40 miles while using just the throttle, and up to 75 miles in the ‘Eco’ pedal-assist mode. There’s also a faster “Off-road” mode for use anywhere that’s not a public road. 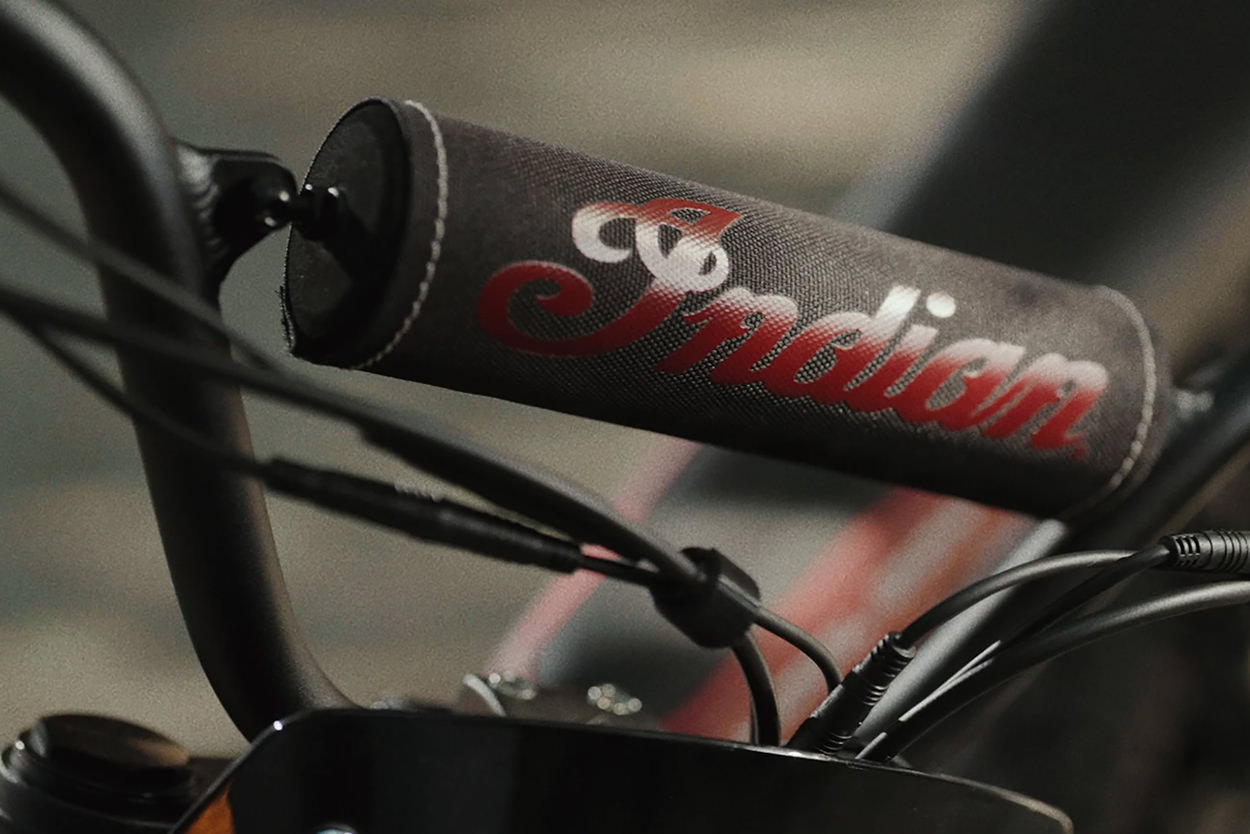 Everything’s packed into an aluminum frame, with inverted forks, disc brakes and 20” wheels. The styling’s on point, with BMX-style handlebars sporting a cross-bar pad, a tidy headlight nacelle, knobbly tires and a generous bench seat. The FTR-inspired paint job and Indian branding on the battery look at home here too.

Using an existing platform to create something that speaks to a wider audience is a clever ploy by Indian. They’ve realized that smaller EVs appeal to a different crowd than their regular clientele, and buying into something that’s already been developed beats starting from scratch.

Ultimately the eFTR Hooligan 1.2 is also an easy entry into the Indian brand, because you can ride it without a license in the US. Plus it looks pretty rad, and should be a hoot to dart around on.

We’d park one in the garage in a heartbeat… would you? [Indian eFTR Hooligan 1.2] 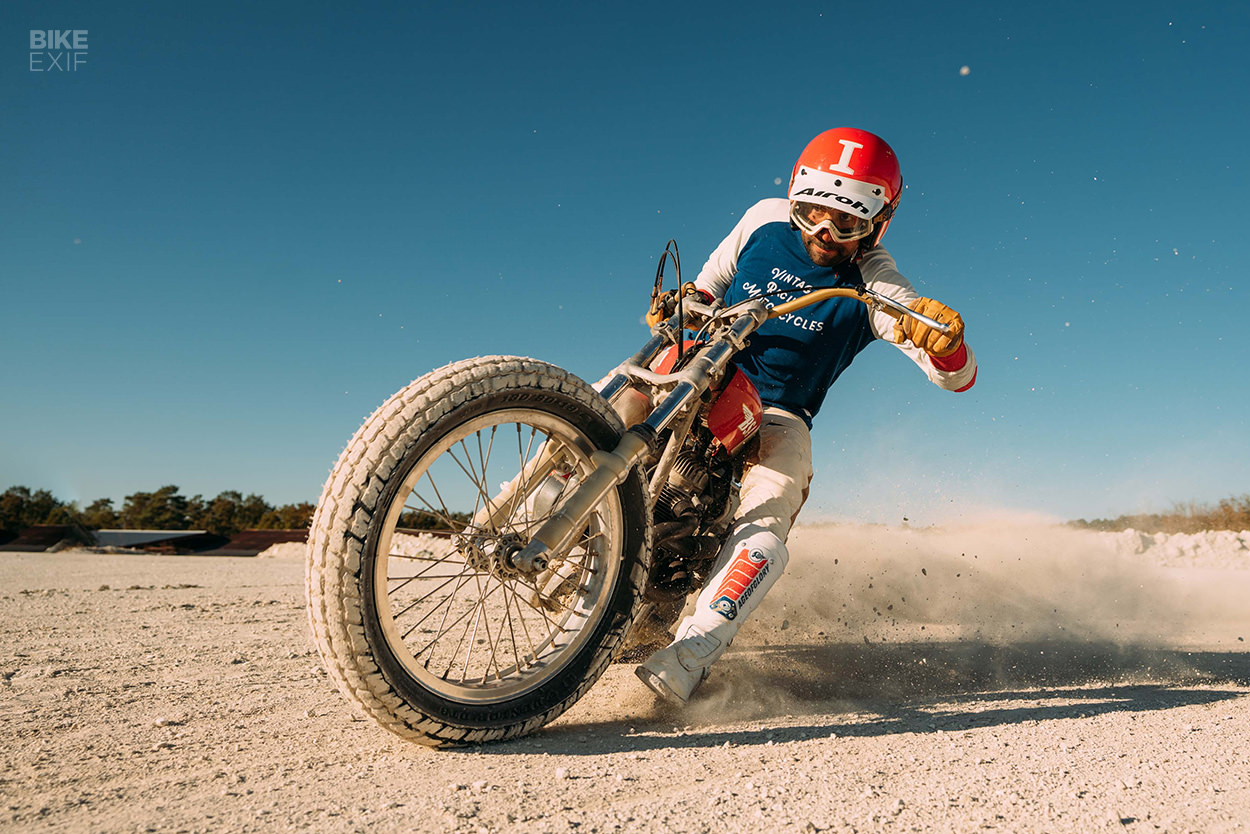 The Last Romantics by Age of Glory Is it riding season where you are yet? If not, this short film from the French motorcycle apparel brand, Age of Glory, should keep you encouraged until the weather warms.

Produced by Chez Moi Prod, the video reflects the company’s love for vintage motorcycling. It follows a dead simple formula too; there’s no cheesy blues soundtrack and not a single grinder spark, just some dudes hooning on vintage dirt bikes and looking fly. [Age of Glory | Chez Moi Prod | Images by Tom Tubiana] 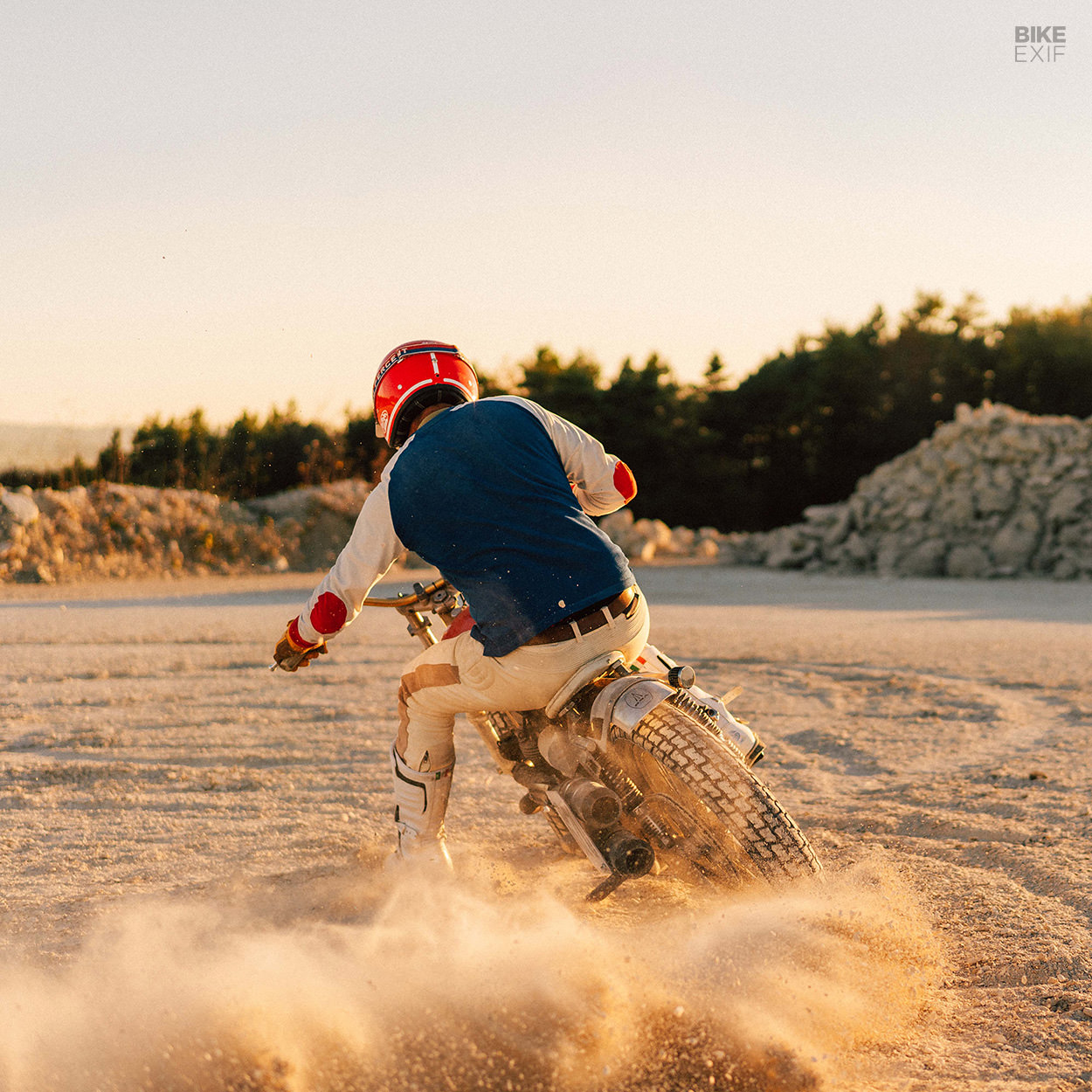