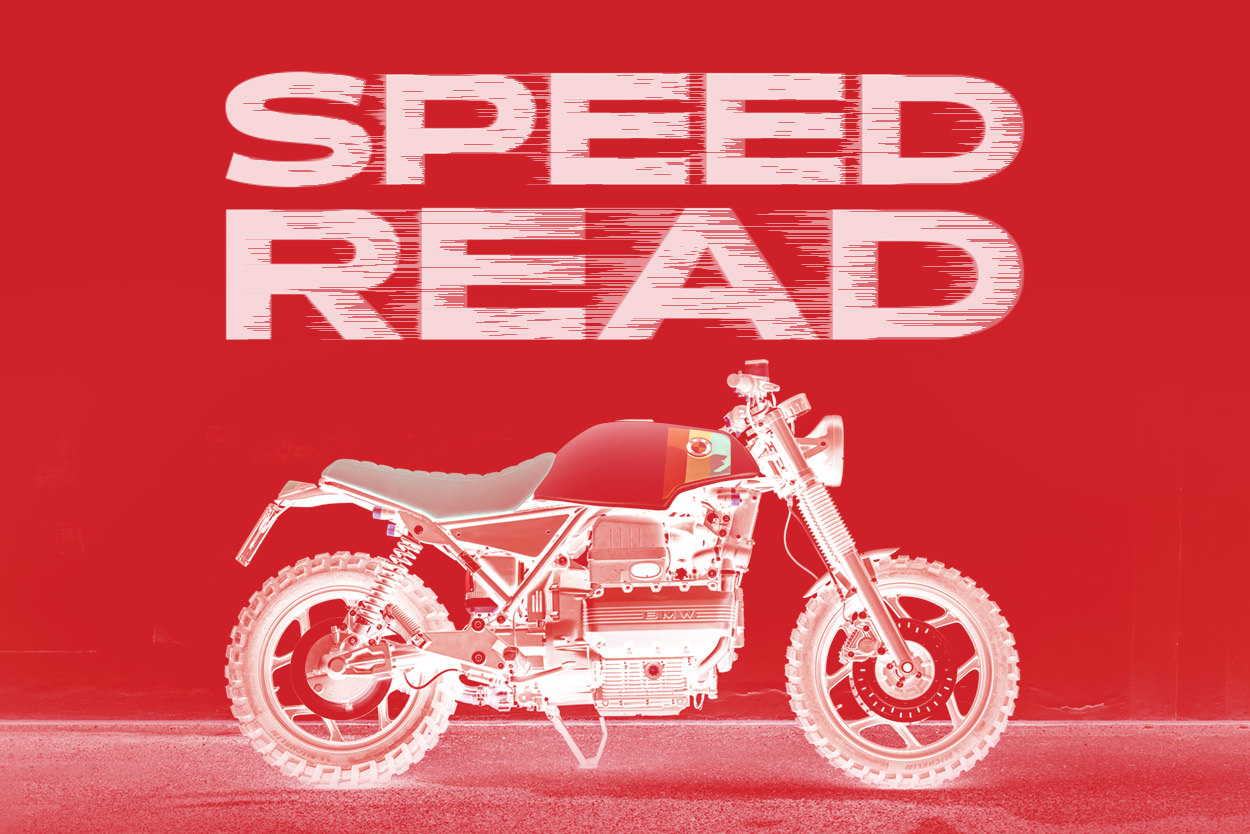 We’re mixing up classics and oddities this week, with a Kawasaki W650 desert sled, a stylish BMW K100, and an art deco electric prototype. We also take a look at a Royal Enfield sidecar rig with a built-in espresso machine, and Kawasaki’s throwback WorldSBK race liveries. 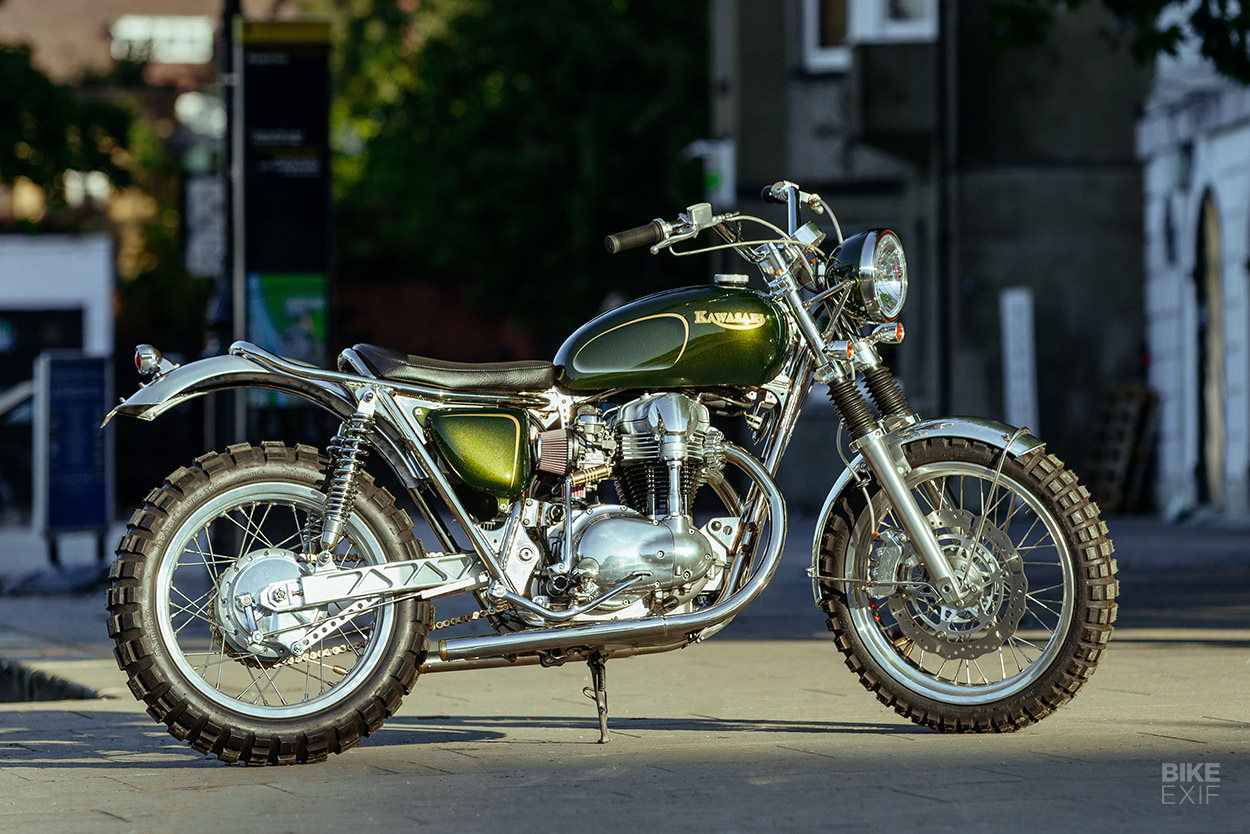 “The album after the breakthrough is always the hardest, right?” he quips. “How do you build a better bike than the last?” We’d say Rick figured out the answer to that question, because this W650 certainly ups the ante. 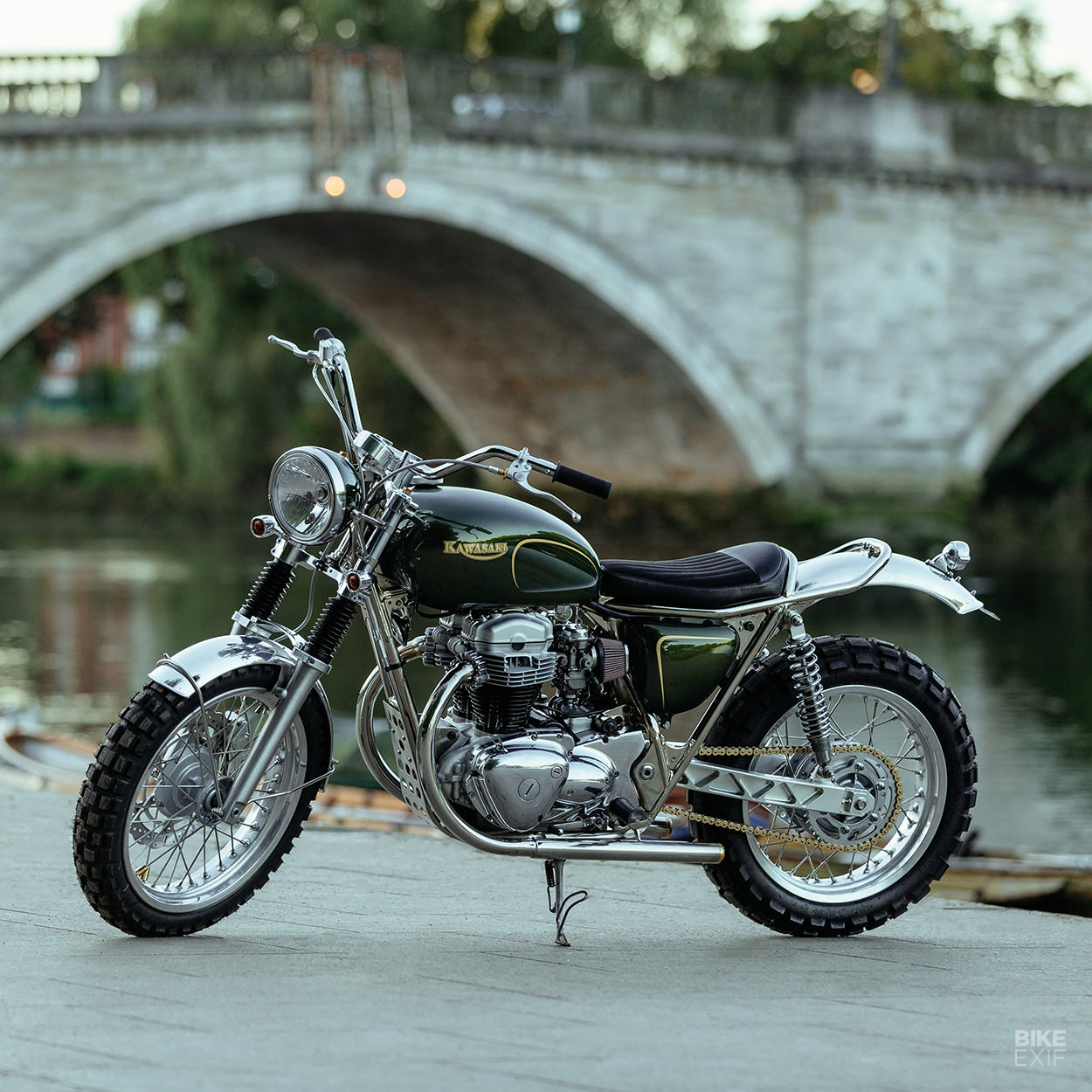 Rick started with a donor that was mostly in good nick, with the exception of a botched tank lining job that had leaked into the carbs. Once the bike was torn down and those issues seen to, the real work could begin.

Rick de-tabbed, chopped and looped the frame, and then had it nickel plated, along with a few other parts. The fuel tank is stock, but heavily fettled: it’s had its seams removed, the brackets that normally hold the knee pads have been shaved off, and the filler cap’s been moved. A short seat and generous fenders drive home the 1960s desert sled vibe. 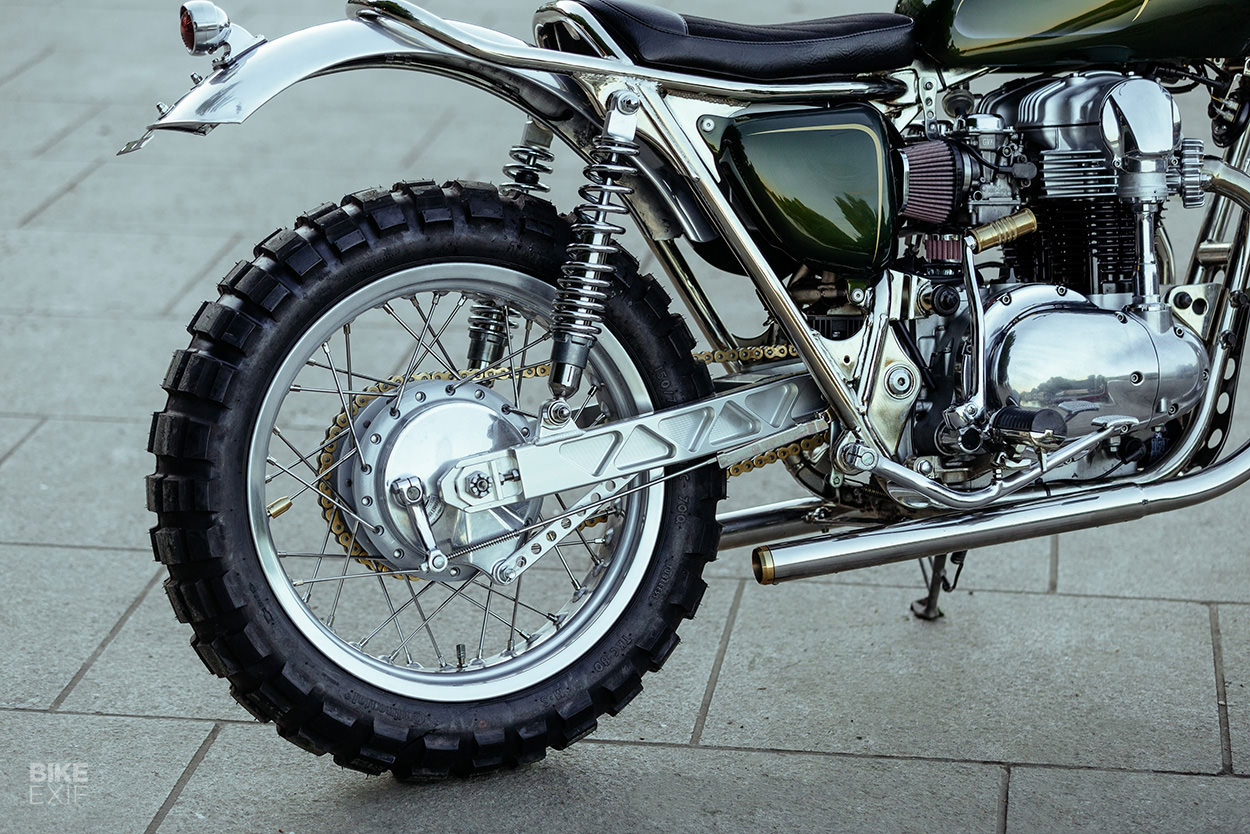 This build is a lot more than a simple outfit change though. There’s a billet aluminum swingarm out back, hooked up to a pair of custom length Hagon shocks. The front forks were kitted with Andreani cartridges and a Dirty Dick’s Motos fork brace, and the fork lowers were treated to a brushed finish.

Rick re-laced the wheels with Morad rims, then wrapped them in Continental TKC80 tires. Then he upgraded the brakes with one of his own ‘big brake’ kits, taking the front disc up to 320mm with a Dirty Dick’s caliper. The front brake and clutch controls are from Kustom Tech. 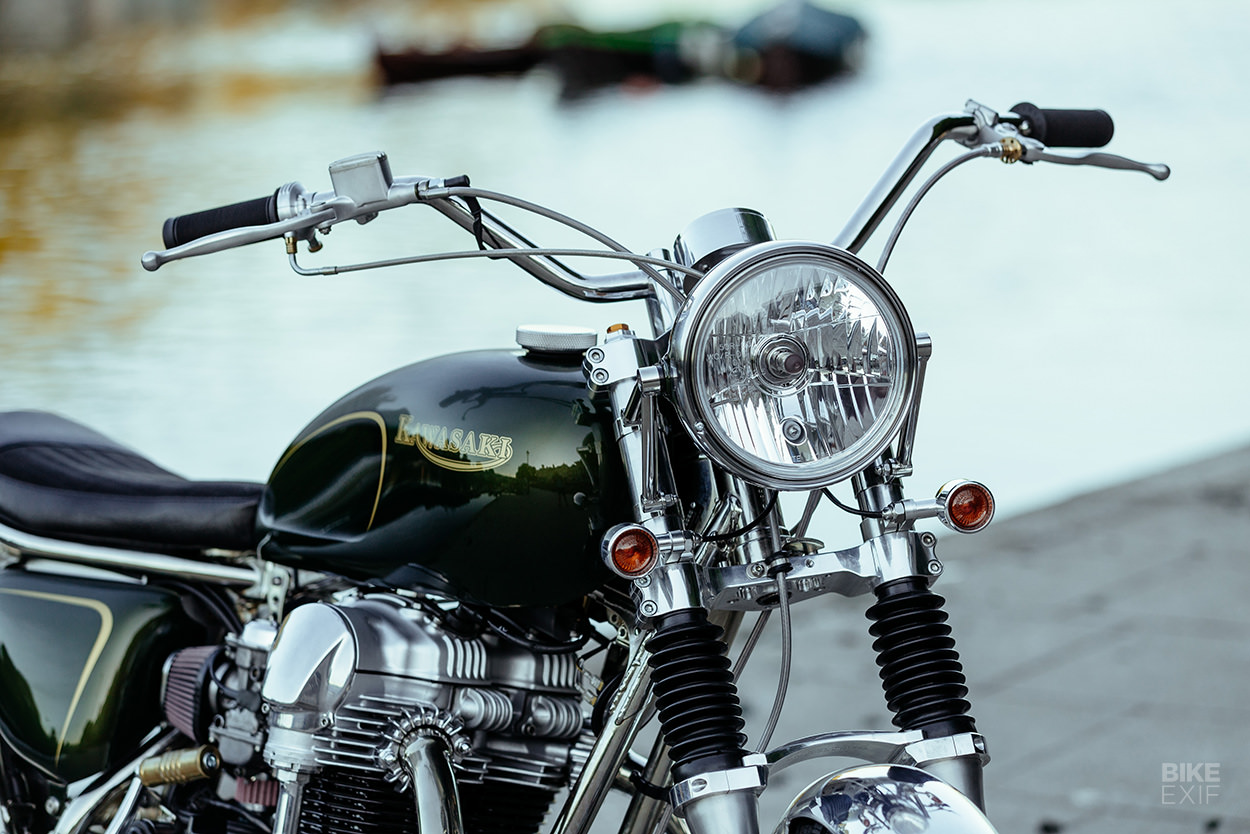 Other changes include a new set of high and wide bars with internal wiring, a bunch of Motogadget bits, an RFID ignition from Axel Joost and a Lithium-ion battery. Lower down you’ll find a pair of K&N filters, and a pair of stainless steel exhausts.

Wrapped in a green paint job that’s deep enough to drown in, with hints of gold flake, Rick’s latest W650 is definitive proof that he has the desert sled genre on lock. P.S. It’s for sale. [Dirty Dick’s Motos | Images by Mihail Jershov] 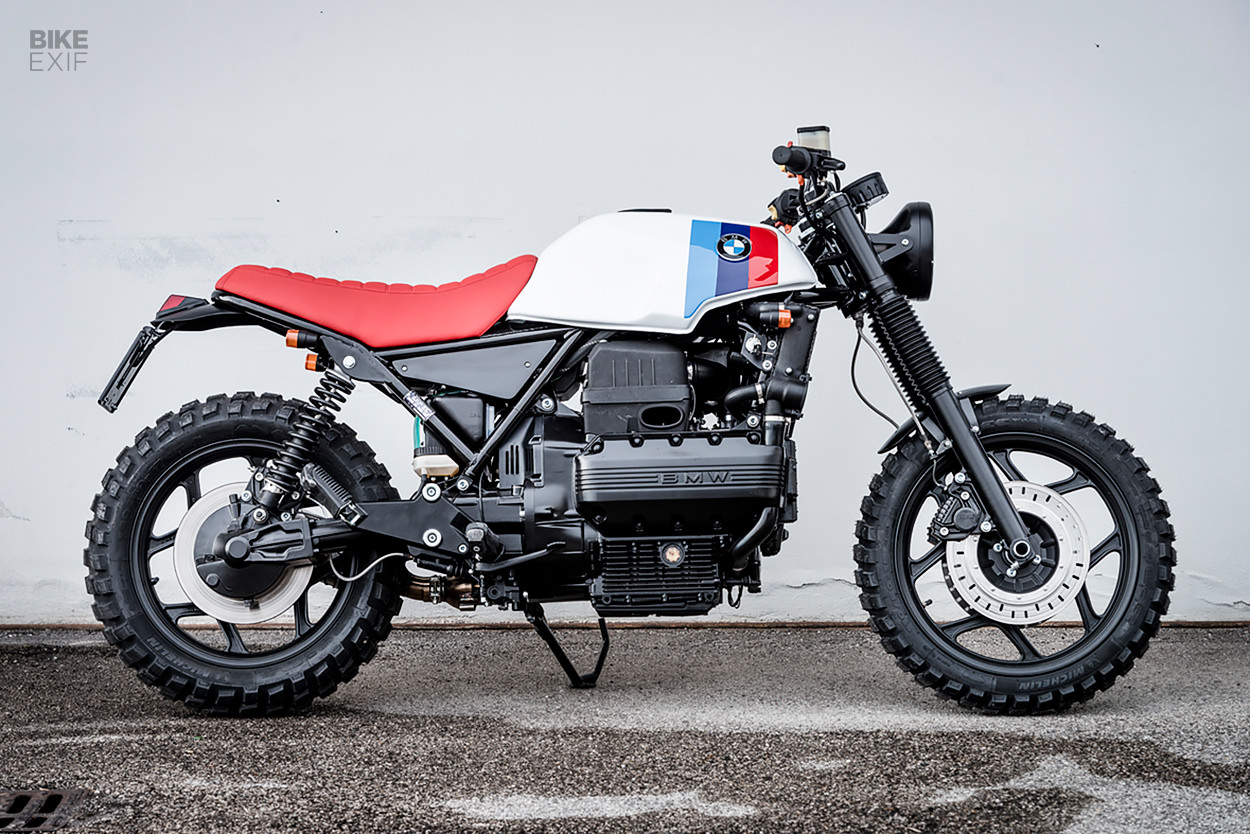 BMW K100 by North East Custom Restoring a tattered BMW K100 to factory condition would be an expensive and laborious task—and most people don’t like the look of a stock K anyway. So when brothers Diego and Riccardo Coppiello at North East Custom were handed a heavily abused K100, they decided to give it a light scrambler treatment instead. 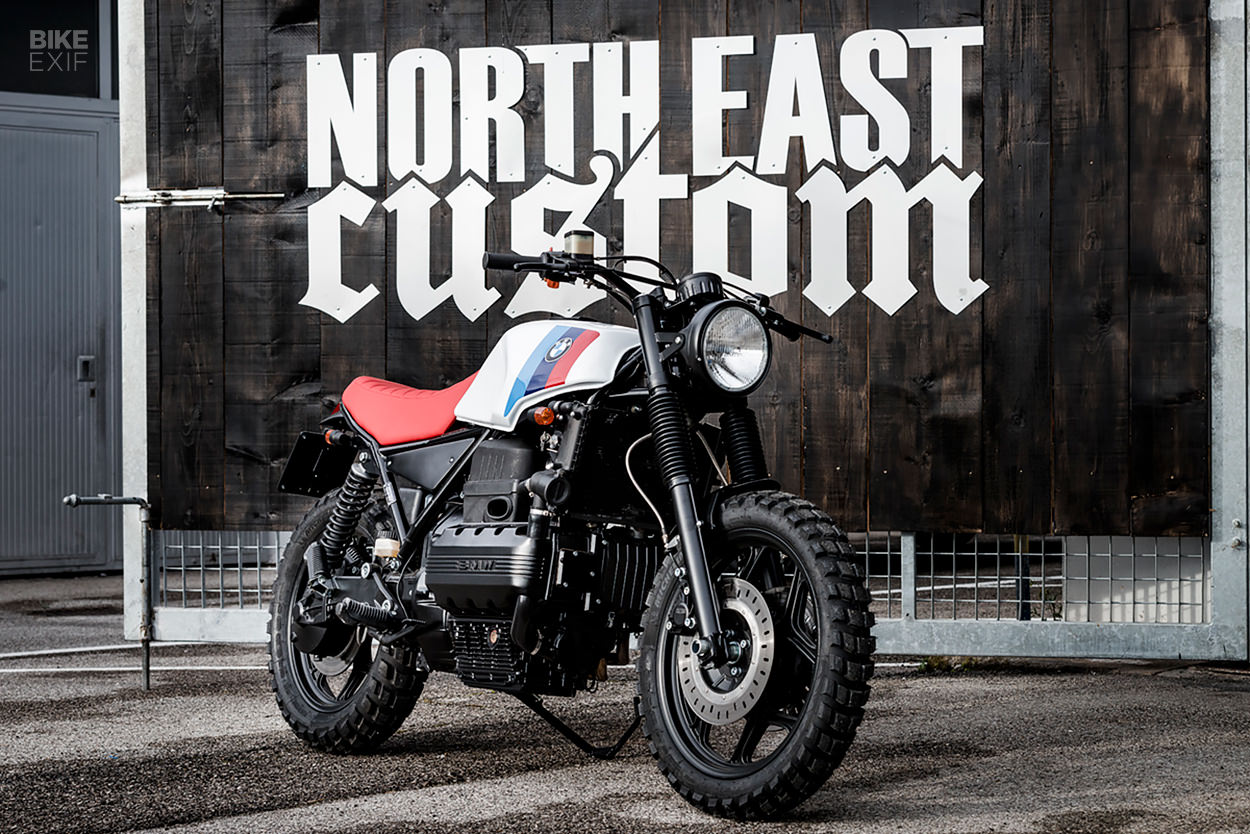 The Italian crew is known for building sensible, no-frills customs, so this build was right up their alley. There’s nothing too wild going on here; all the stock bits that could be restored, were, and everything else went in the trash.

North East kept the K’s stock fuel tank, but built a new seat for it. Generously padded, it sits on top of a custom subframe, with a short fender and enduro-style taillight capping off the rear end. Lower down are a pair of handmade side covers. 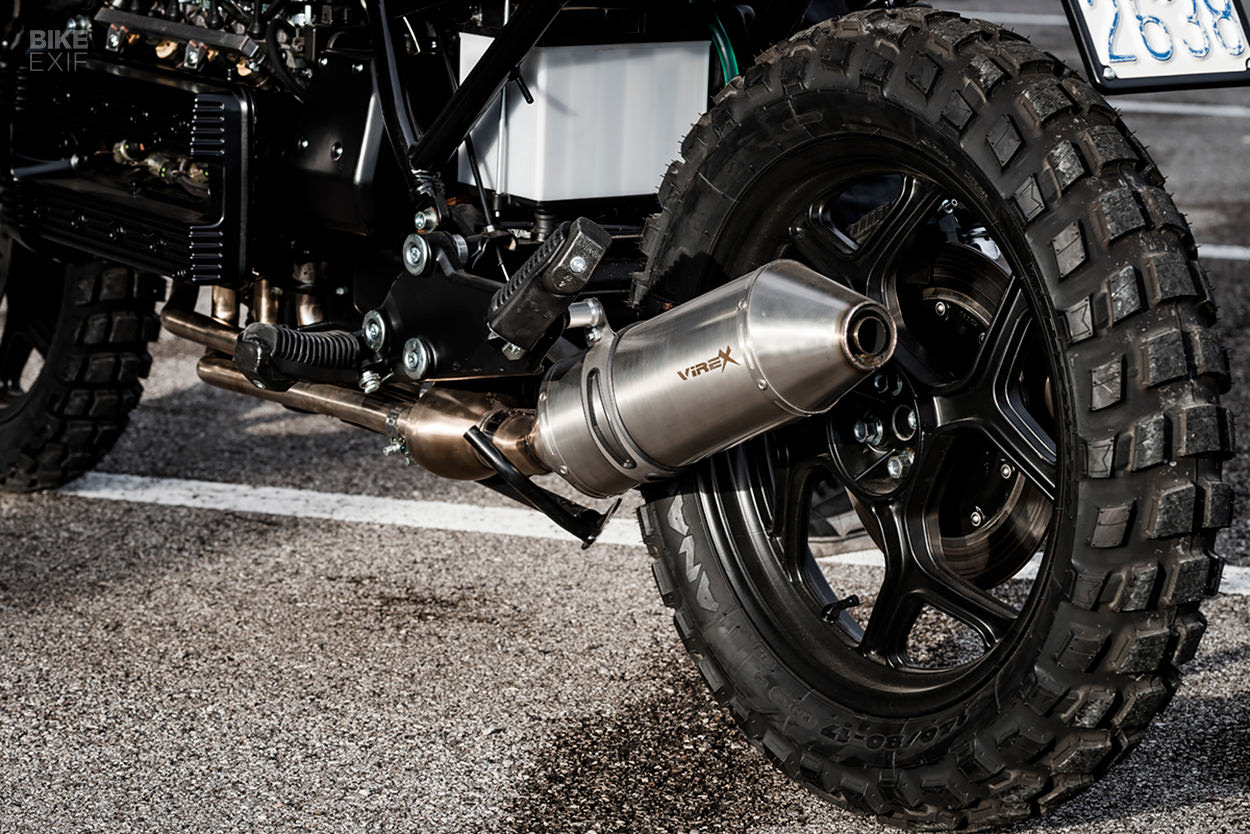 The stock airbox is still in play, but the exhaust’s been swapped out for a full system from Virex. The OEM wheels now wear Michelin Anakee Wild rubber, and North East saw to little upgrades like braided stainless steel brake lines too.

Out front is a new headlight, mounted on custom brackets. Just behind it is an Acewell speedo, with new handlebars and grips matched to the stock switchgear, and the ignition relocated to the side of the bike. 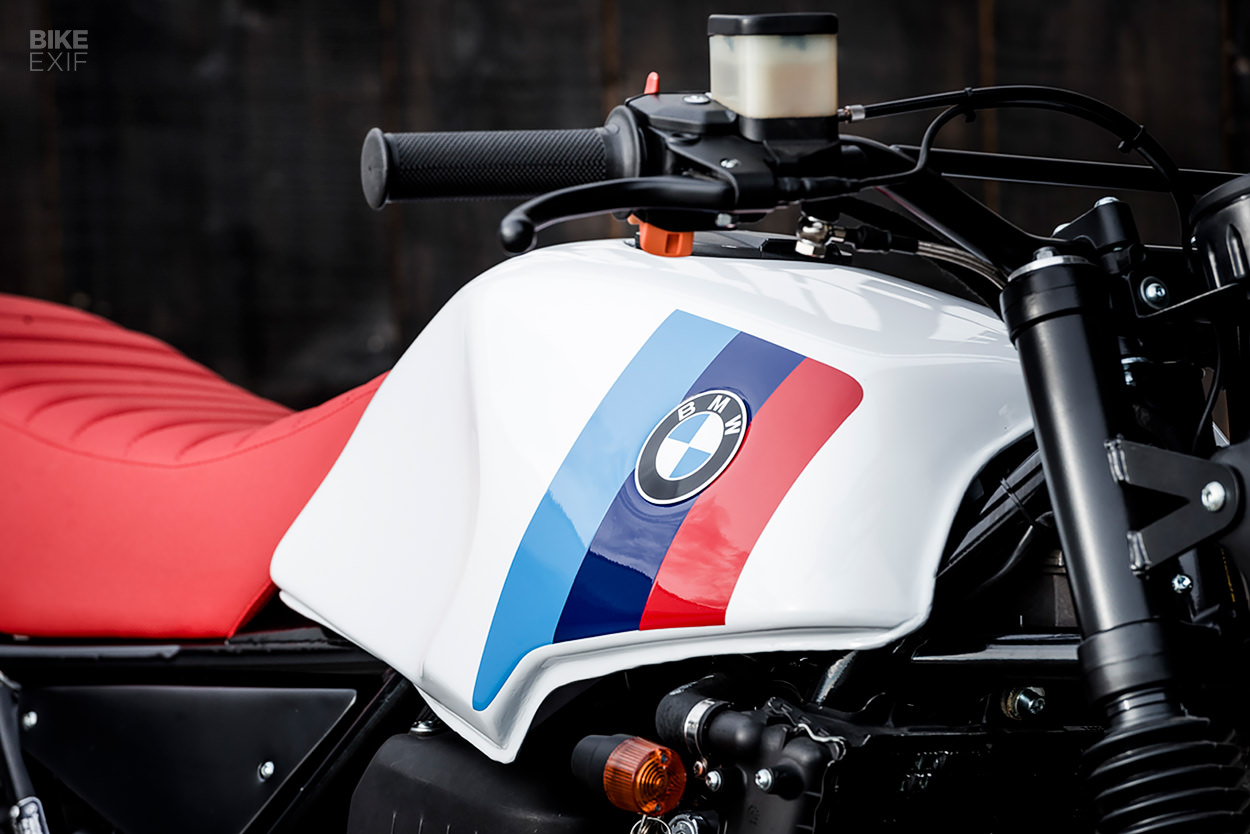 It’s a clean and simple restomod, and a great way to rescue an old BMW without going overboard. Top marks for the period-correct GS livery and matching seat, too. [North East Custom | Images by Filippo Molena] 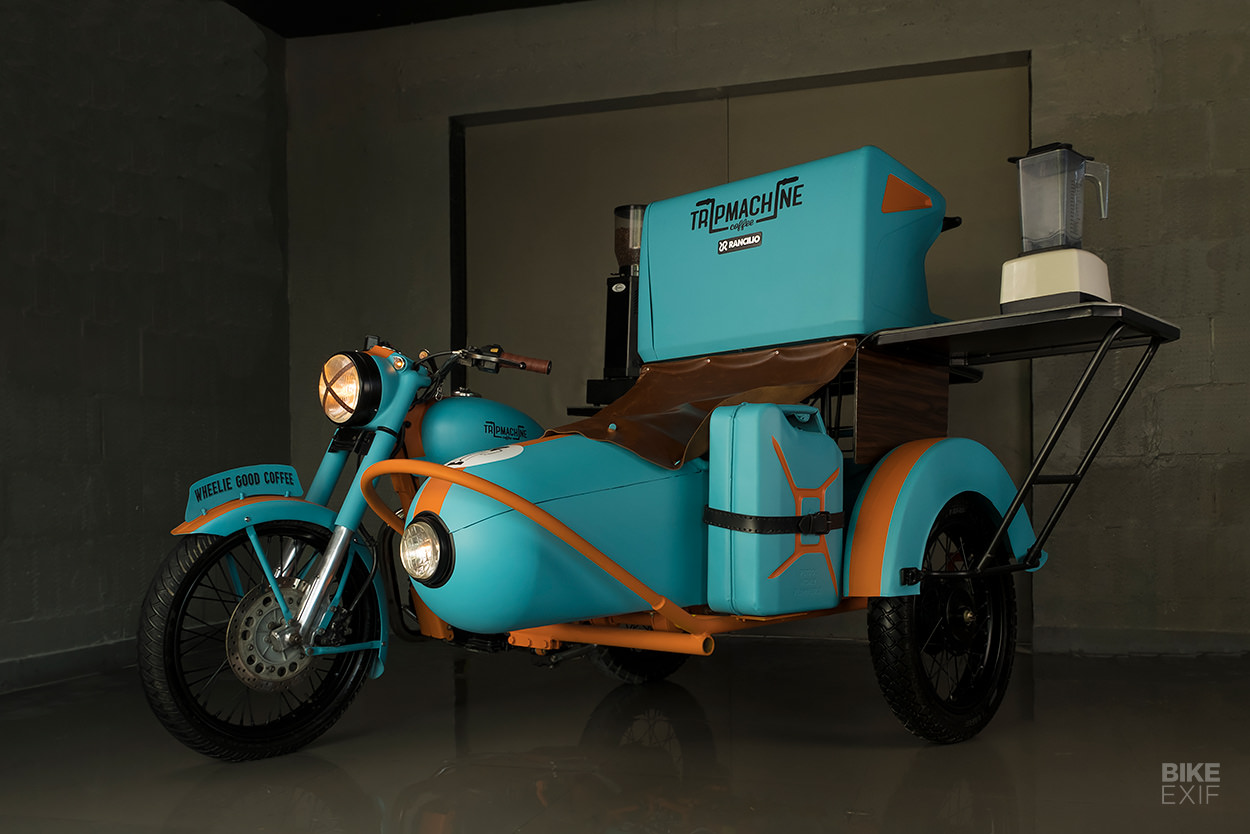 Royal Enfield coffee cart by Trip Machine Company Based in India, Trip Machine’s specialties are leather motorcycle products and coffee. Their latest project combines both into one ultra-classic, and super fun, machine.

We’ve seen coffee sidecar rigs before, but this is the first time we’ve seen one from India. Trip Machine started with a Royal Enfield 350 Classic, added a sidecar, then kitted it to serve up black gold. 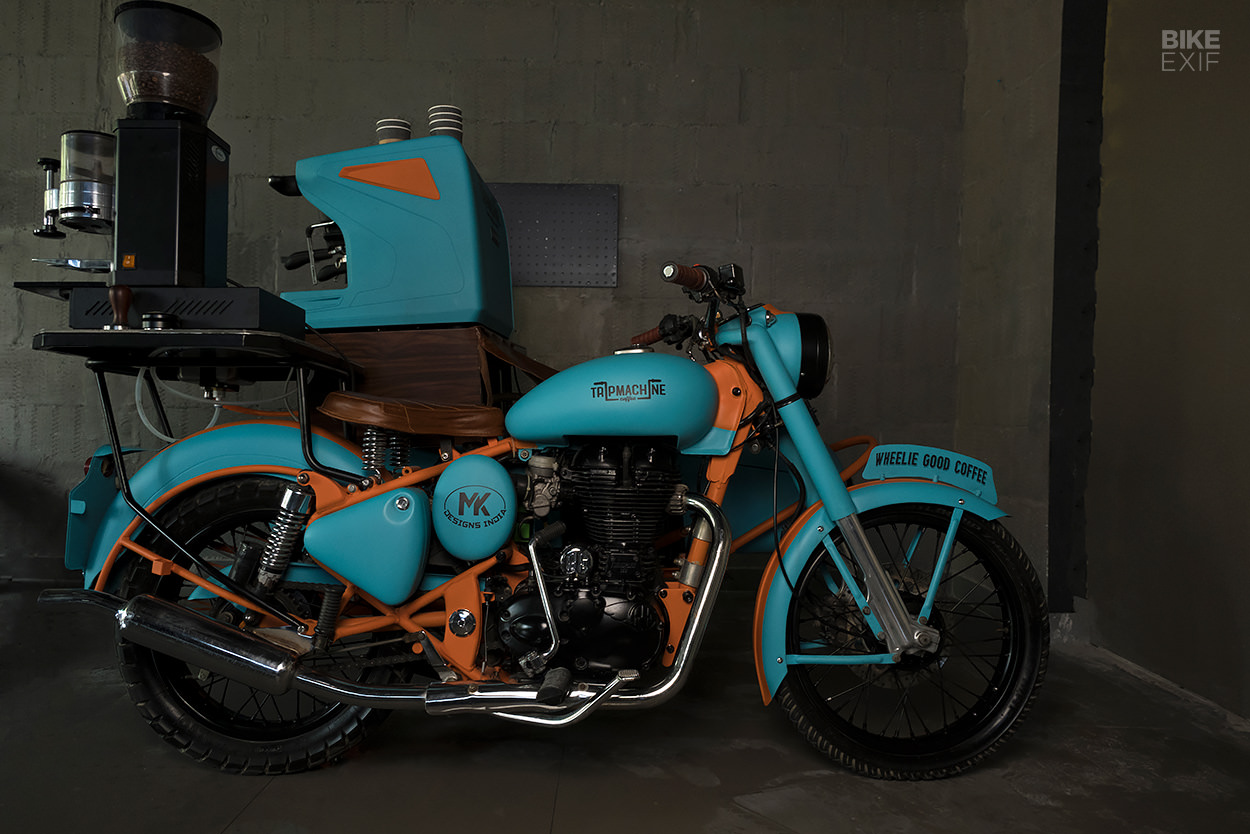 The setup includes a Rancillio espresso machine that can kick out 1,000 cups a day, plus a grinder, a blender, a rinse station, adequate drainage, and cold and dry storage.

The bike itself has had some modifications too, to keep it looking as classic as possible. Trip Machine added subtle touches like custom-made fenders, different lighting, and a set of bars from an older Royal Enfield model. 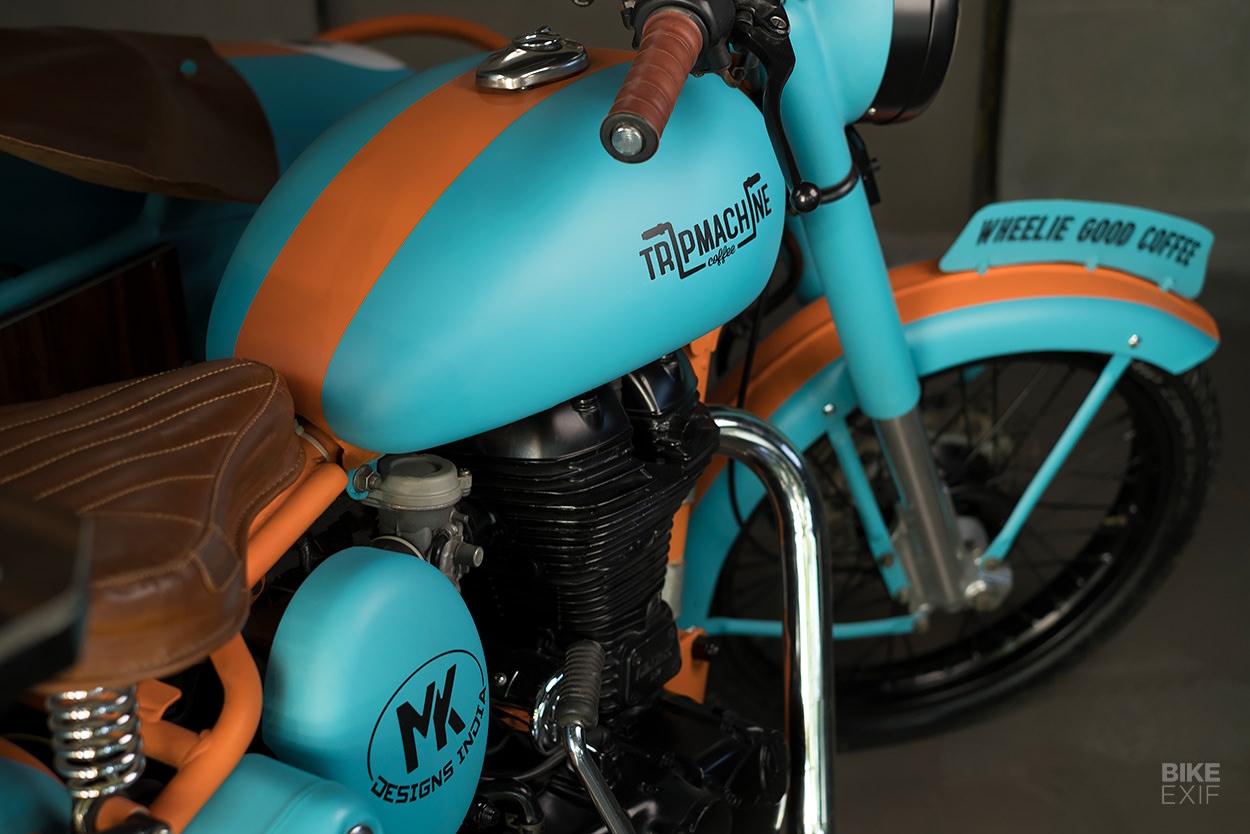 Since the company specializes in leather, there’s a lot of that too. The grips, ‘X’ on the headlight, sidecar cover and traditional sprung saddle are all custom pieces. Wood trim on the counters adds another classy touch.

The rig’s license plate holder reads “I fuel humans,” so Trip Machine carried the ‘fuel’ theme through to the livery. Gulf Oil colors are often overused—but this rig is more than cute enough to pull it off. Coffee, anyone? [Trip Machine Company | Images by Vijay Krishnan] 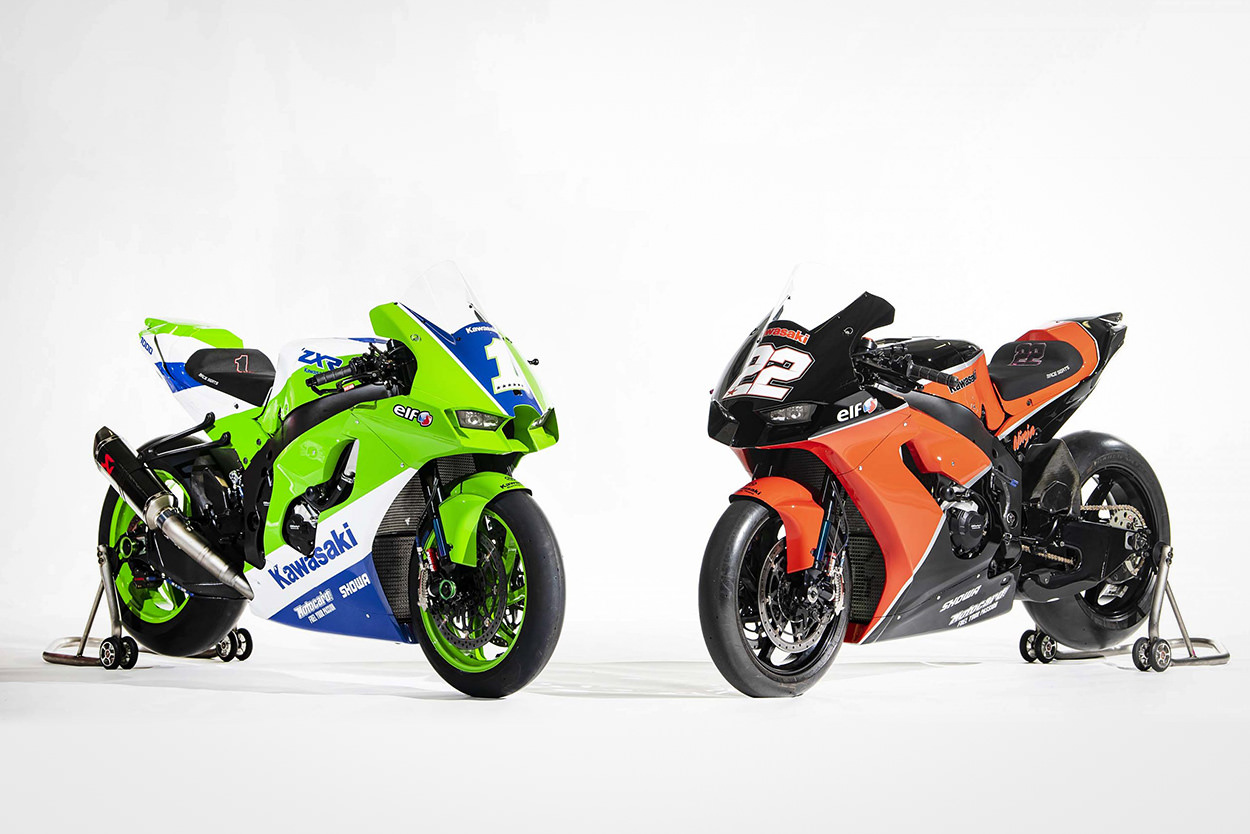 Kawasaki’s throwback WorldSBK race liveries If you’re as put off by modern motorcycle racing liveries as we are, here’s a look at how to do it right. Kawasaki’s WorldSBK race team had something special on track at last weekend’s Argentinian round: two classic liveries for their Ninja ZX-10RR race bikes, to celebrate the company’s 125th anniversary. 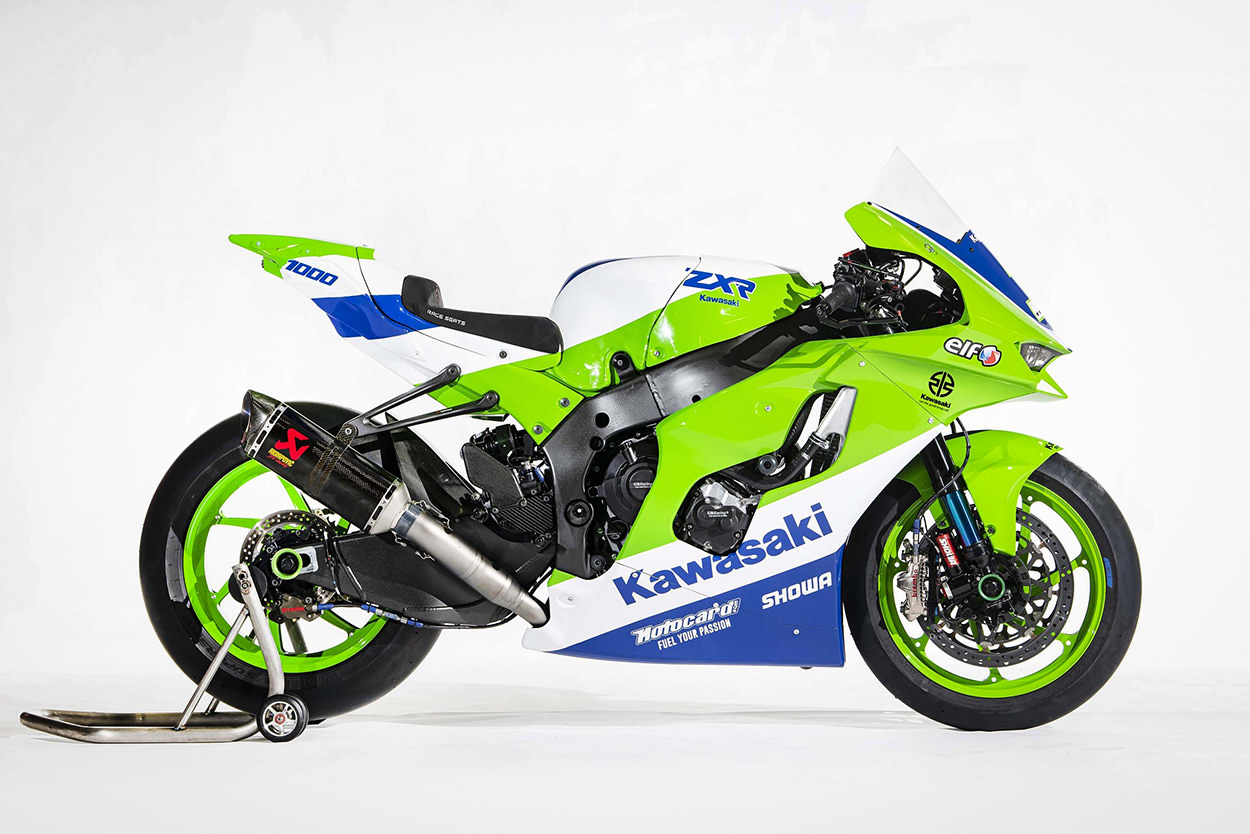 Both color schemes were yanked right out of the 90s. Six-time WorldSBK champion Jonathan Rea’s bike [above] was wrapped in a green, blue and white scheme, taken from the Kawasaki ZX-7R that raced the Daytona 200 in 1993. 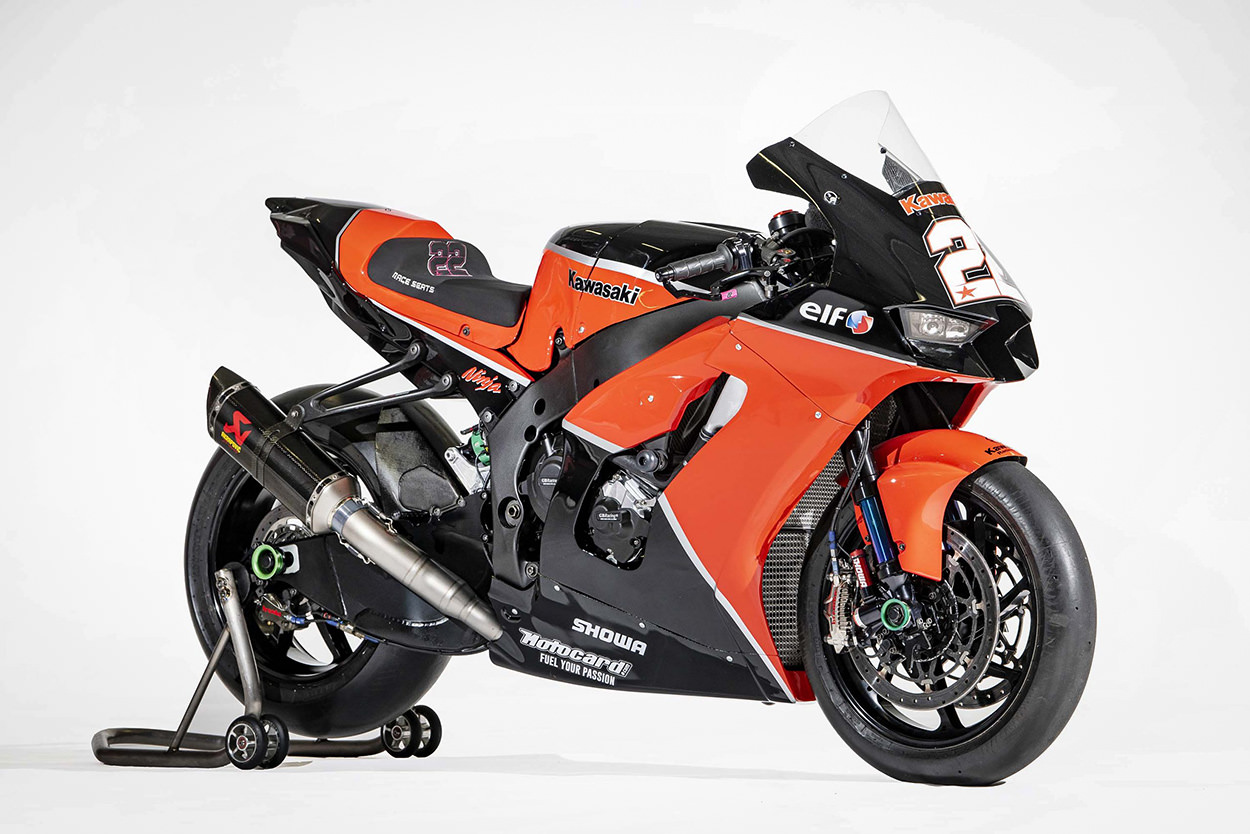 The only down side is that these liveries only ran in that Saturday’s race, and now only exist in our memories. Perhaps Kawasaki will do the right thing, and release these as limited edition models for the masses. Better yet, perhaps other manufacturers will be inspired—and we can make race liveries great again. [Source | Images: Kawasaki] 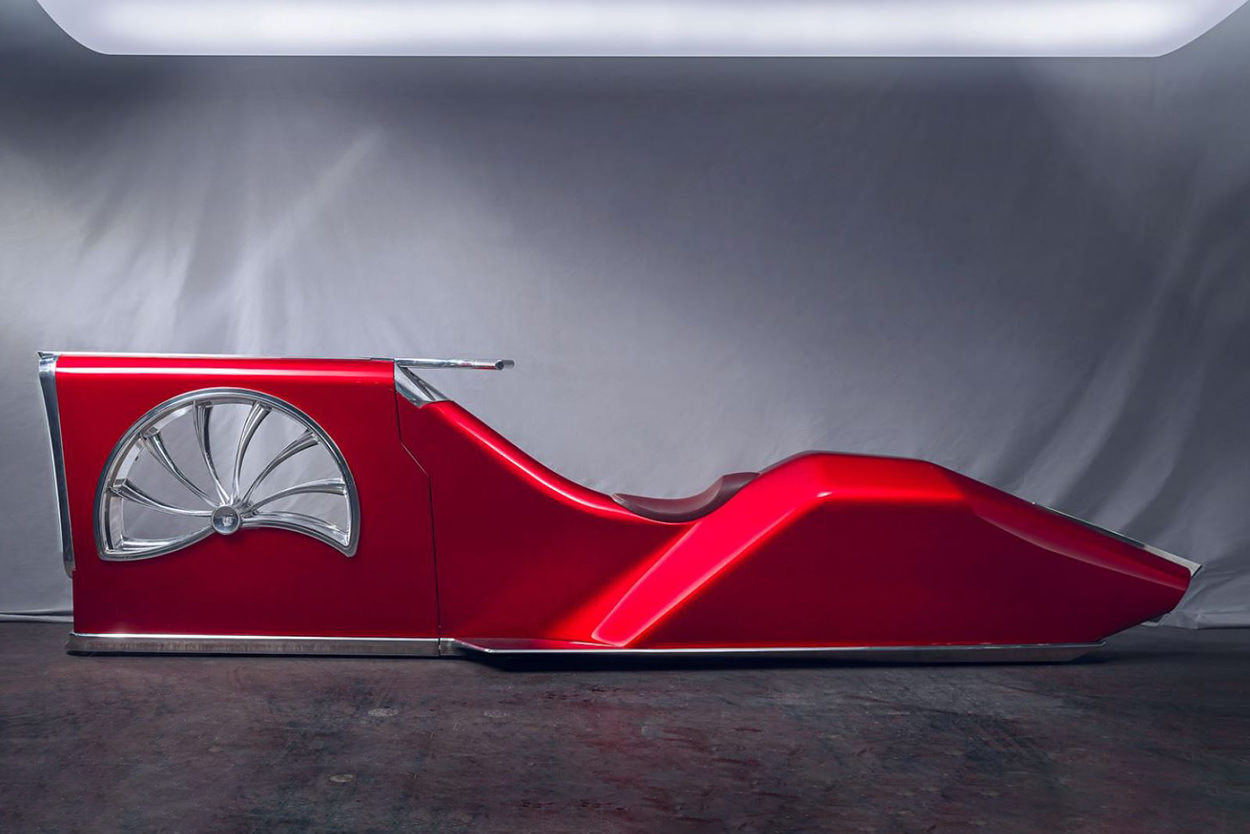 Guido custom electric bike by Box39 Our counterparts over at Bike-Urious have a knack for digging out obscure and odd motorcycles. This one takes the cake—we had to do a double take just to figure out which end is the front.

Listed on Bike-Urious’ partner, Iconic Motorbike Auctions, this custom electric prototype is named ‘Guido’ after the 17th century Italian painter, Guido Reni. It was built by the Russian workshop Box39, and commissioned by a local distributor for the machine tool company Haas Automation Inc. machines, to show off the capabilities of their products. 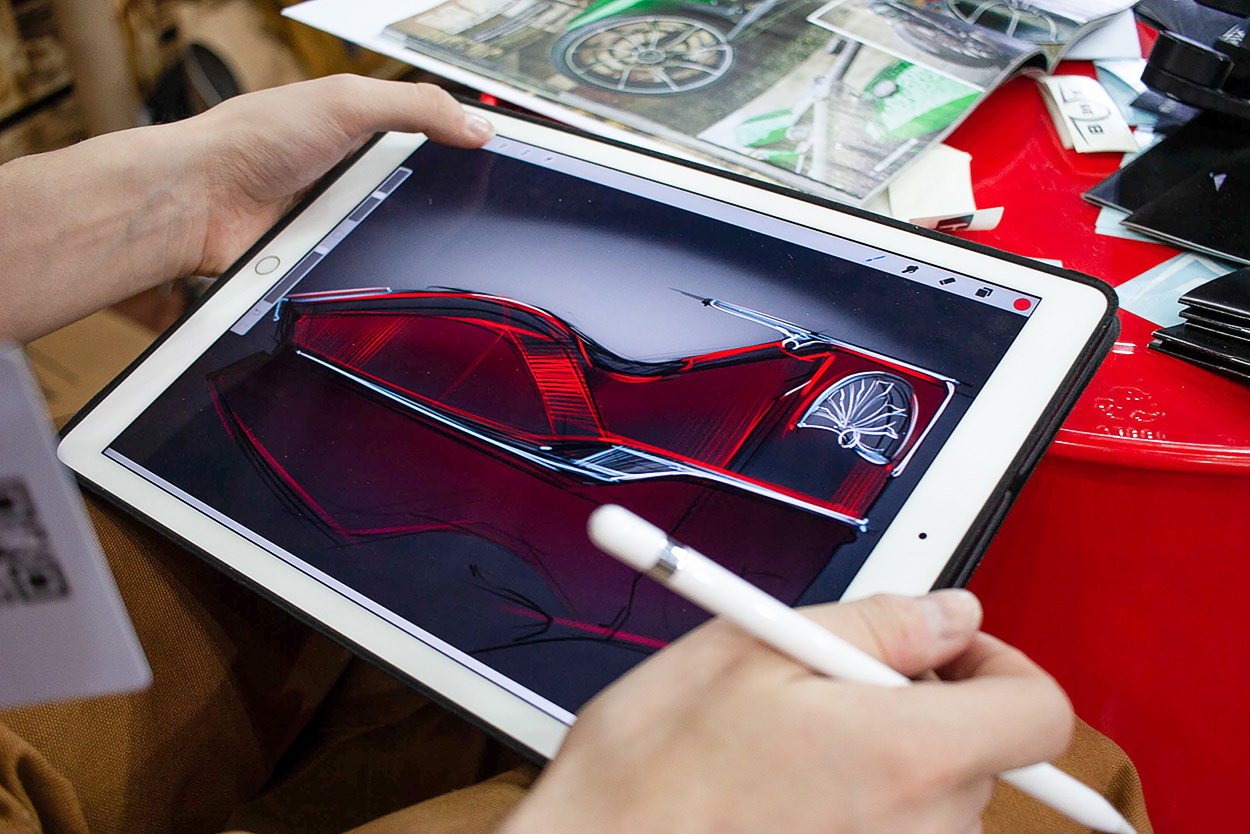 The inspiration for Guido’s design came from a Rolls-Royce concept car drawing. The main hook is the fully enclosed full fender that partially showcases the front wheel. The wheel itself measures a whopping 30”, and took 200 hours of machining time to create.

Guido’s bodywork is all aluminum and was formed by hand. Hidden underneath is an electric motor and battery, an adjustable rear suspension system, and a 17” rear wheel. And despite looking like one fluid piece, the front is actually able to turn independently. 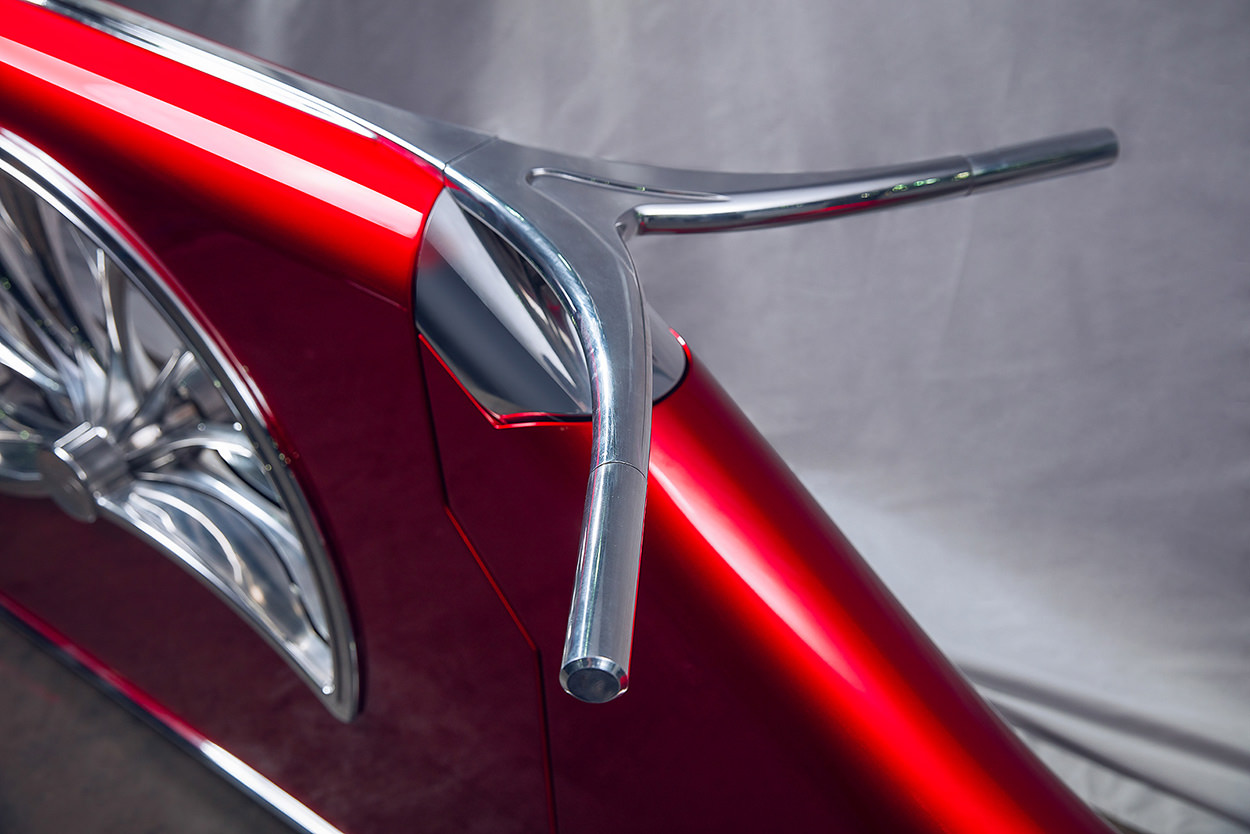 Although the project was a pure design flex and not actually meant to perform, it technically does go, stop and turn—just without any sort of enthusiasm. If you’re looking for an eye-popping showpiece or something to bend necks outside your local cafe (as long as it’s literally down the road), you can always bid on Guido. [Source]